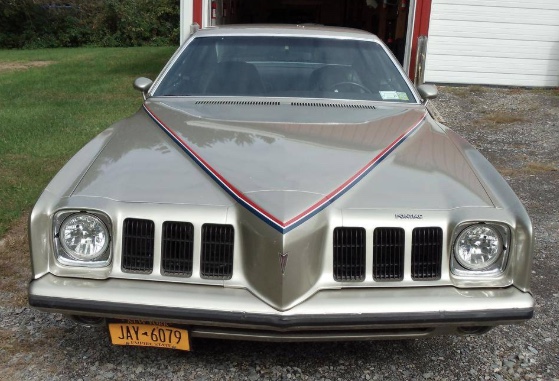 Update – We first featured this Grand Am in May 2019 and it has long since sold!

In the early 1970’s, Pontiac noticed that sportier models from Mercedes and BMW were starting to make inroads into the U.S. market. Unlike American cars of the time, the German manufacturers gained success by combining luxury features with sporty performance. Hoping to capitalize on this trend, Pontiac took the luxury appointments of the Grand Prix interior and combined it with the performance features of the Trans Am into a stylish version of GM’s new A-Body to create the original Grand Am. Following the launch, car enthusiasts quickly labeled Grand Ams as “sleepers” since they had the straight line performance of the Trans Am with superior “Radial Tuned Suspension” handling. Unfortunately, the Grand Am launched just as the Arab Oil Embargo hit and with only a selection of gas guzzling V8s to power the car, sales quickly dwindled and consequently Pontiac canceled the car after a short three model year run.

We found this 1973 Alcott Silver-over-Black vinyl Pontiac Grand Am here on Hemmings.com located in Syracuse, NY for the asking price of $21,500. Based on the Hagerty Insurance online valuation tool, the private seller has his car listed about $3,000 below the #1 Concours condition level, so we feel there is room for negotiation on the purchase of this car. With less than 36K miles on the clock, this car appears to be a straight and rust free example of the marque.

The black vinyl interior is in excellent condition consistent with the car’s low mileage. A fun fact is that this was the first GM car to move the high beam switch from a floor button to a stalk-mounted control on the steering column. The seller states the factory air conditioning blows cold air. The factory AM/FM radio also remains in place.

Equipped with the optional 400 cubic inch V8 topped with a four barrel carburetor, this Grand Am makes a pleasant alternative to the flashier Trans Am of the time. Good luck with the sale!