The weekend of July 13-14, 2019 weather-wise was another gorgeous weekend in the Bucks County, Pennsylvania area, so on Saturday the Guys With Rides Team decided to show our beloved team mascot, a 1998 Porsche Boxster, at the Schattenbaum Chapter of the Porsche Club of America Concours held at Peddler’s Village in New Hope.  The event turned out to be a very casual affair with an almost Cars & Coffee like atmosphere where we quickly realized this was not going to be a typical Porsche Club Concours.  As a result, we could relax a bit, leave our last-minute detailing Q-tips in our bag, and sit in the shade enjoying casual conversation with other Porsche owners.  About mid-morning, a fine young man name Evan stepped up to me and asked, “Hey, isn’t this the Boxster I saw at Radwood East last month?” To which I proudly replied, “Why, yes it is!” and I realized his black 1999 model was the only Boxster I saw while at that event. After reviewing our Boxster with him, we took a walk down to learn more about his.

It’s no secret that Porsche ownership for most enthusiasts under 30 is an aspirational goal as prices of air cooled examples continue to be floated on an unsustainable bubble mainly supported by BringATrailer.com that is now creeping into former Porsche bargains such as 914s, 944s, and 996 911s.  Not deterred, Evan entered the Porsche world with the $6,000 purchase of this 163K mile 1999 triple black Boxster. Evan had no intention of showing his nicely patina example in the concours;  he merely came out to see the other Porsches in attendance.  That’s what many people don’t realize about the Porsche Club: Evan was openly welcomed to park his $6,000 Boxster between a $120,000 air cooled 930 Turbo and a $45,000 water cooled 996 Turbo.

Some might call Evan’s car “well used”; we loved the patina and the fact he didn’t even clean it before coming to the Concours. While Evan didn’t pay a lot for his Boxster, he does have a very well-optioned example that includes sport seats, headlight washers, and a carbon fiber like material covering the dash and door panels that we have never seen in a Boxster before. 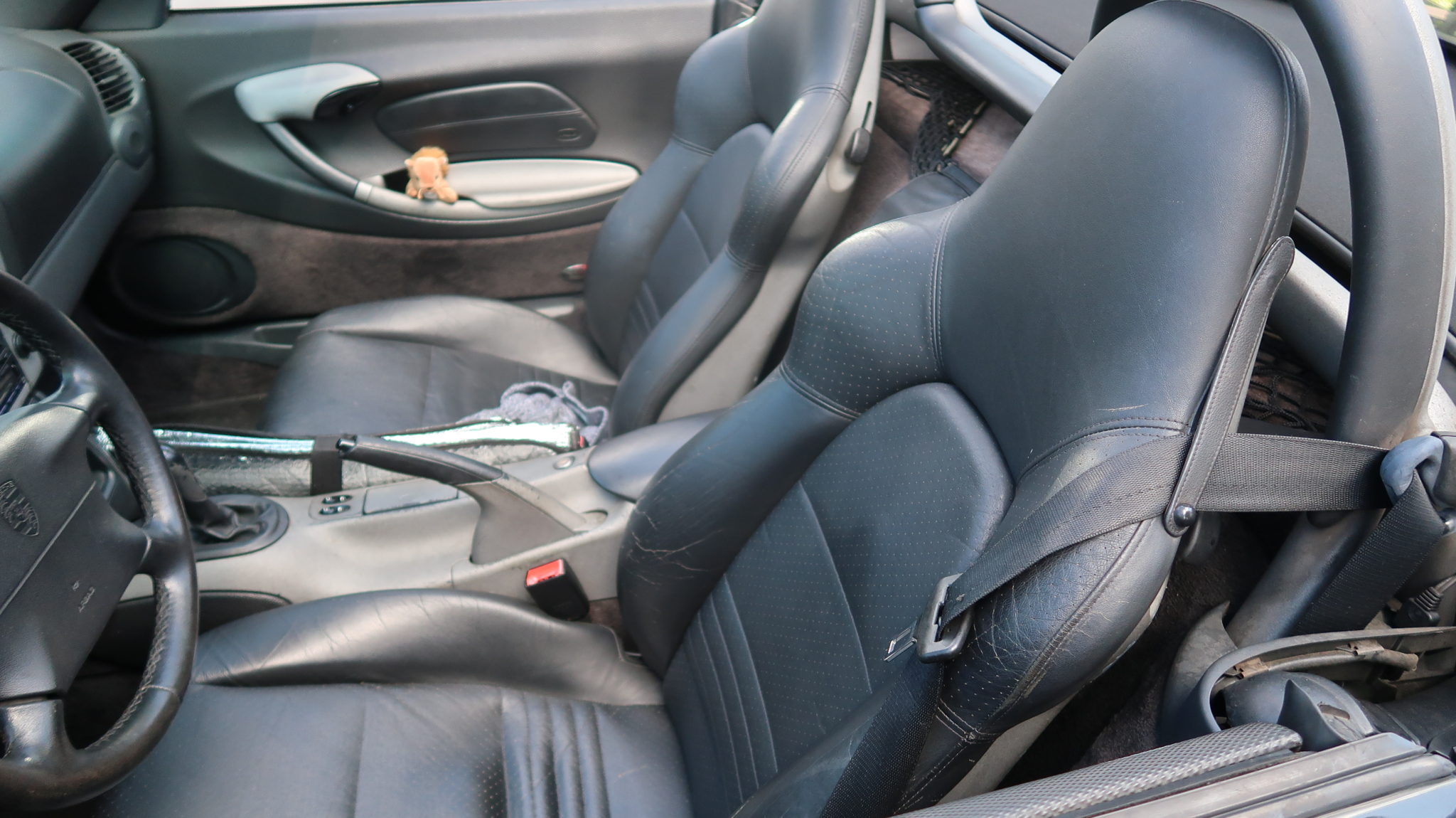 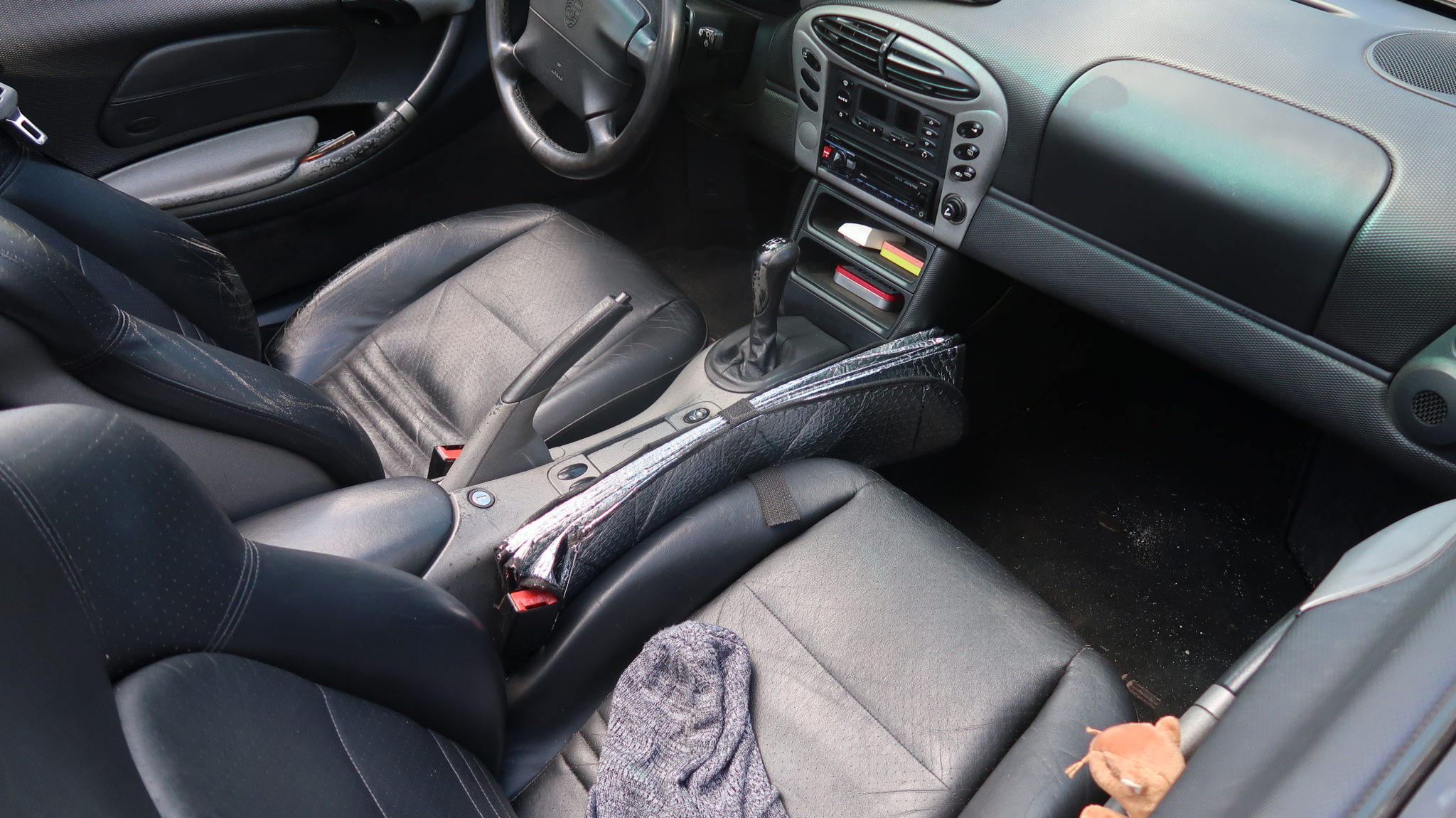 The cloudy headlights and stone chips are typical signs of a well-used Boxster, and Evan’s car is no exception.  Evan reports that his Boxster reliably runs much better than it looks and as long as its not raining, he drives top down.  Evan found his Boxster for sale at a shop that was working on flipping the car for resale, so he convinced them to do a LN ceramic retrofit bearing, as well as some other mechanical items to keep the car within his budget.  Evan pointed out, ” I did keep the original IMSB as a conversation piece. It is tight, spins fine, and has no sign of wear despite having 160k on it when it came out. The early dual row bearings seem about as reliable as any other random component in a 20-year-old engine, but they get swept up in the fear tide anyway.” How very true and with 102K on our ’98 with the original dual-row bearing, we believe our IMS will hold up just fine too. 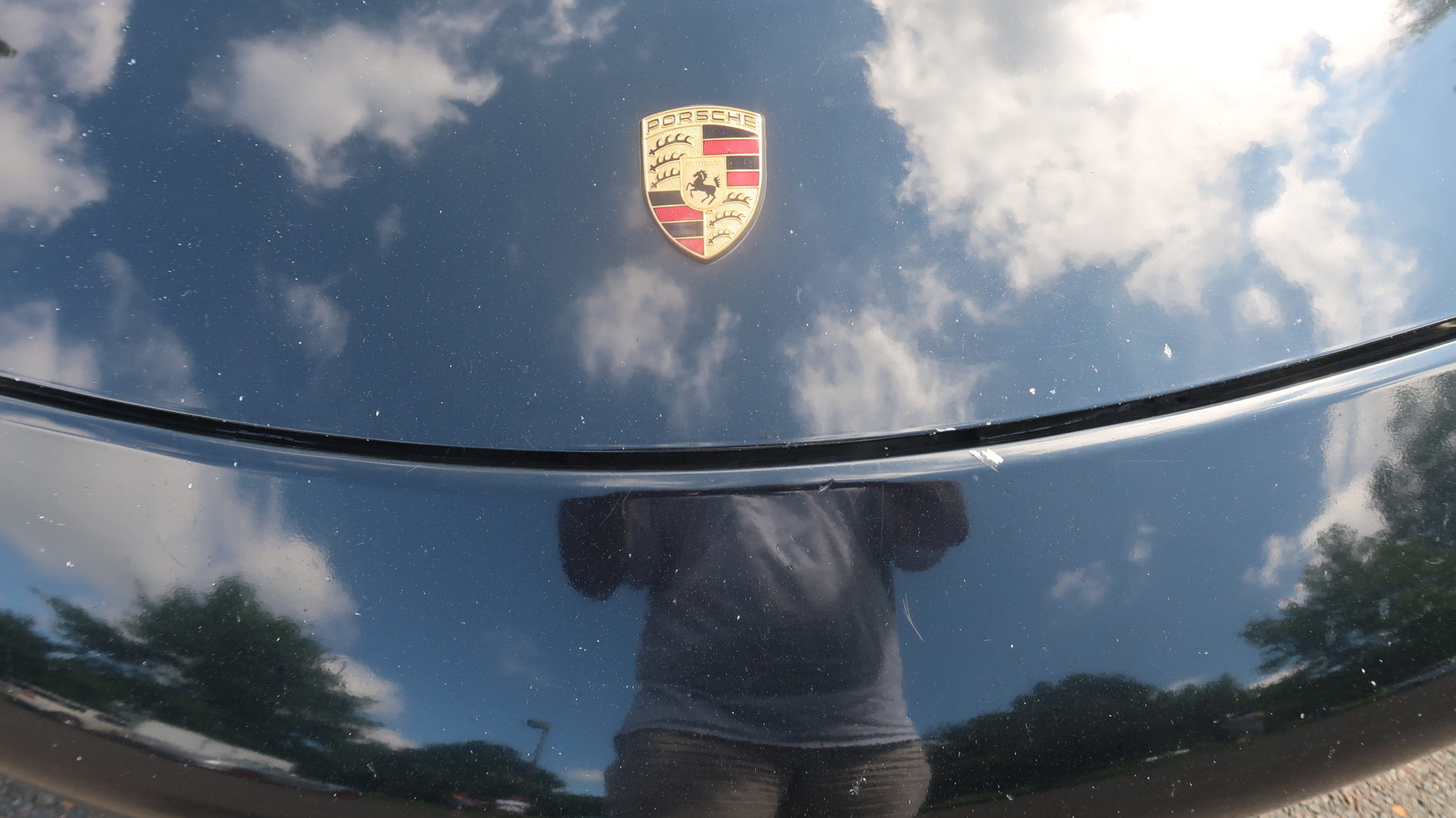 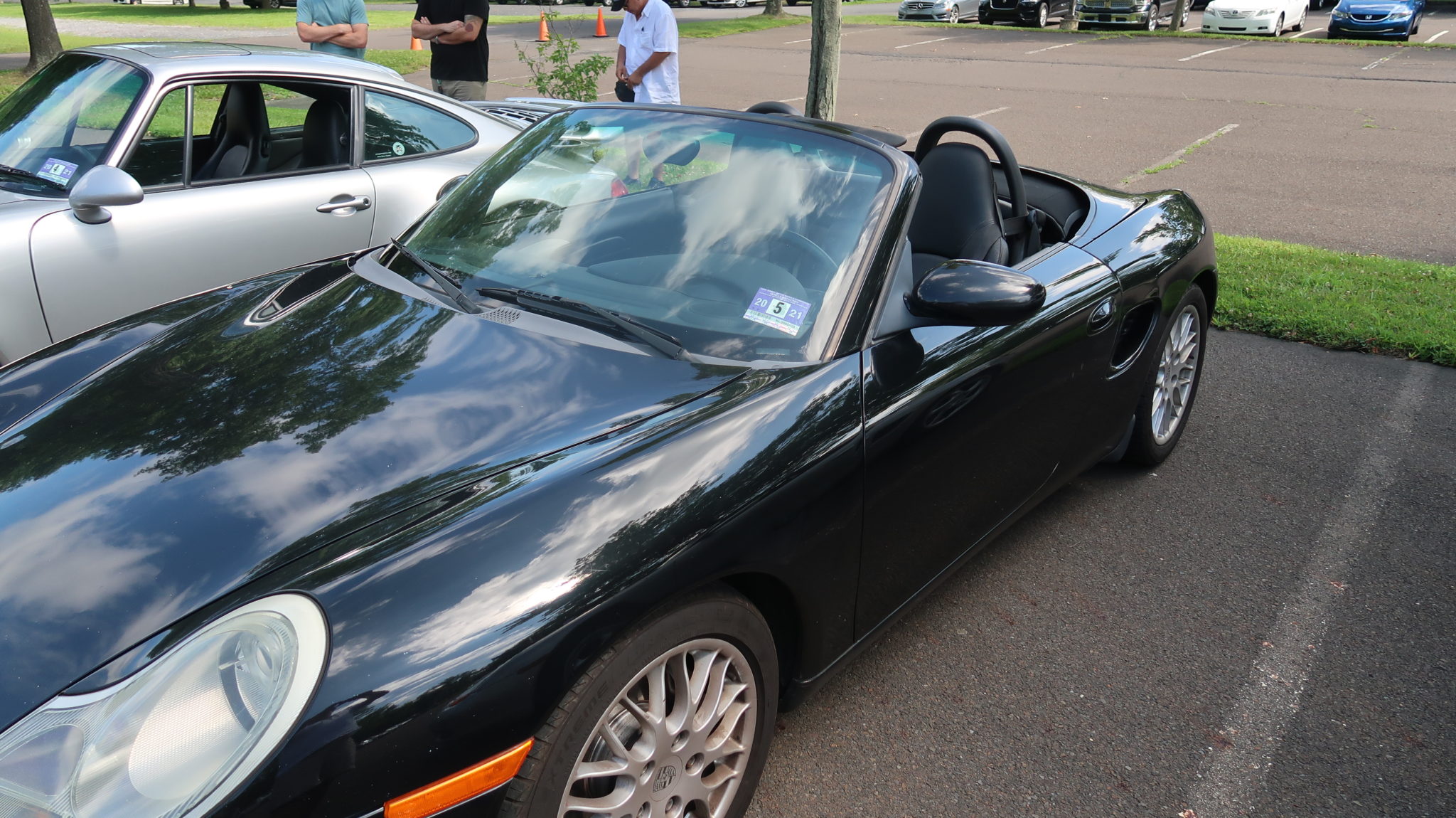 It turns out that this Boxster is not the lowest mileage car in Evan’s fleet.  He also owns a 1990 Saab SPG with 260,000 miles on the clock!  Some might think that with two high mileage cars Evan is likely working on them constantly.  Luckily, he lives around the corner currently from his employer, so he considers his bike his “daily driver” these days.  We look forward to running into Evan and his Boxster at future Porsche Club events!