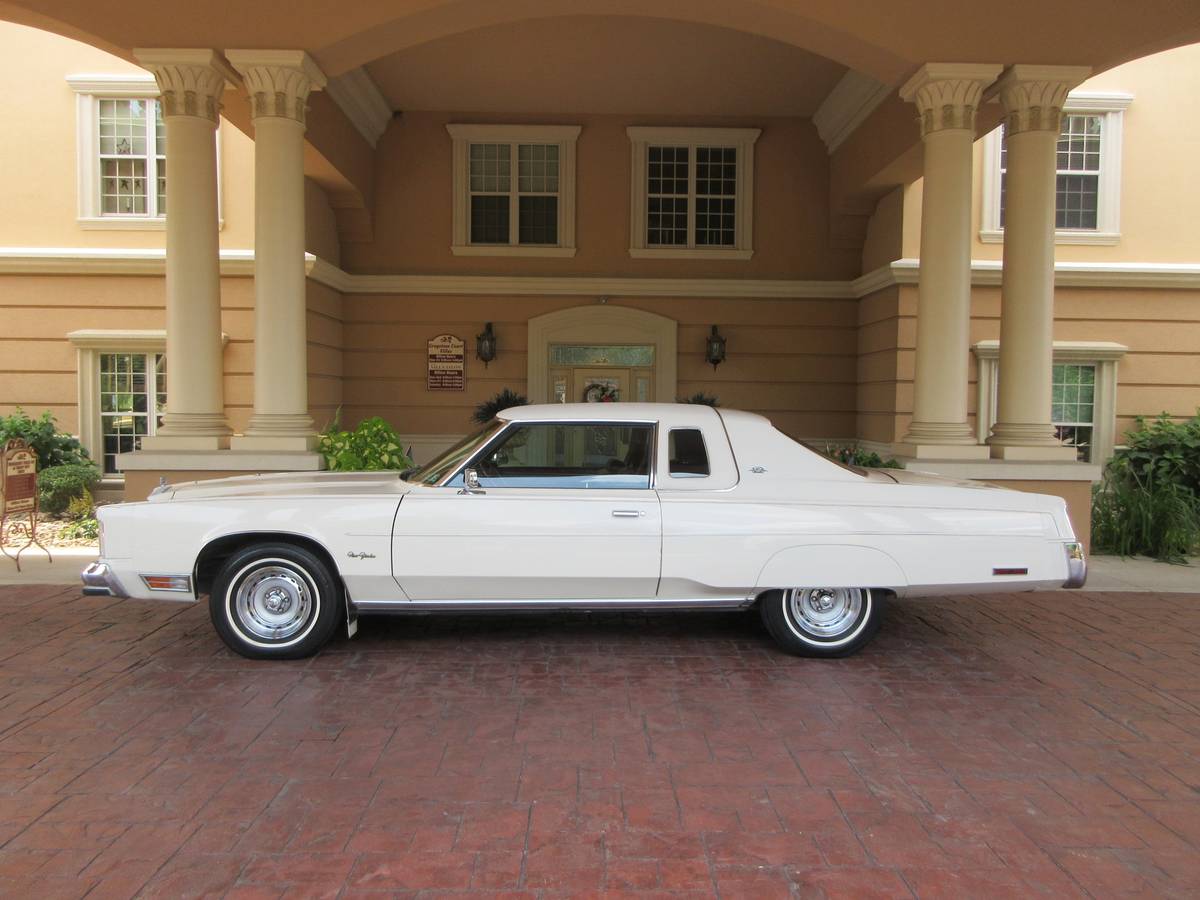 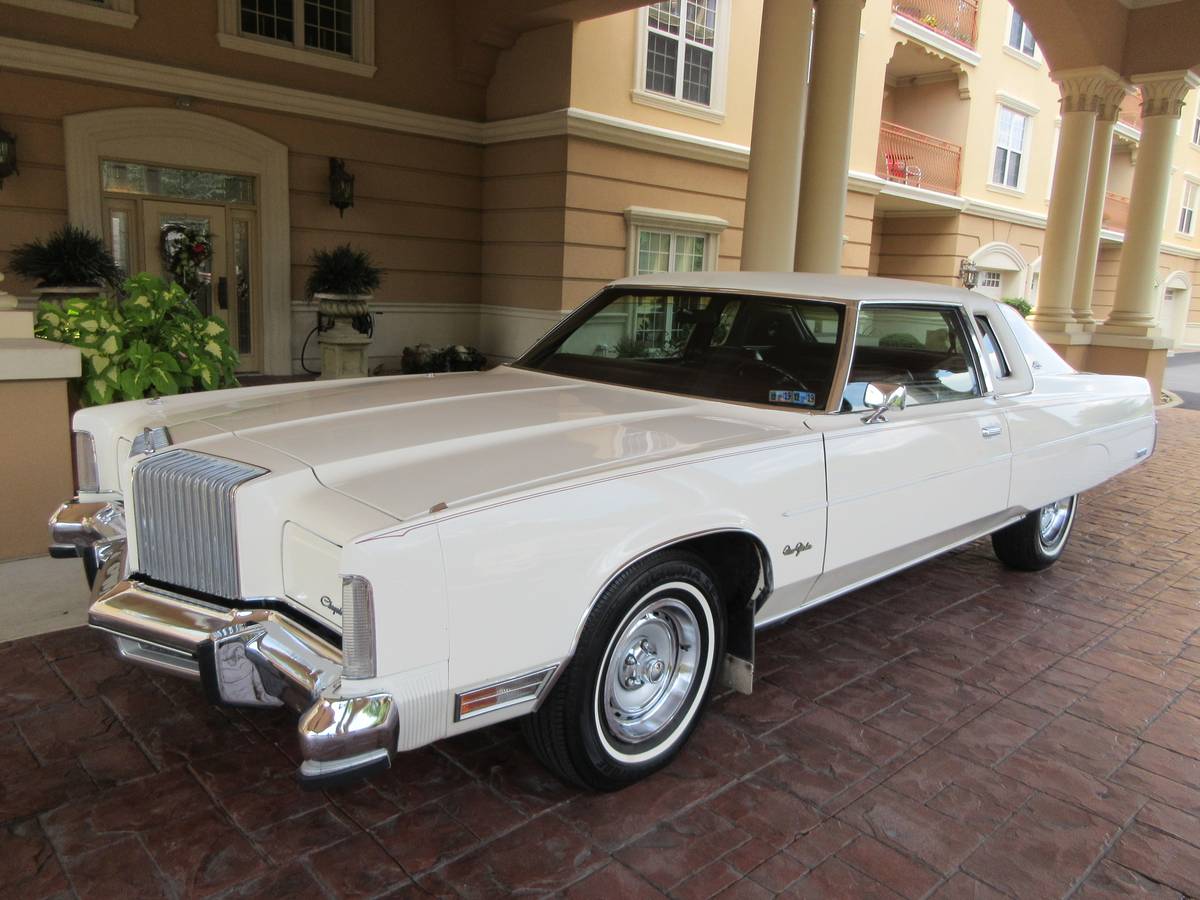 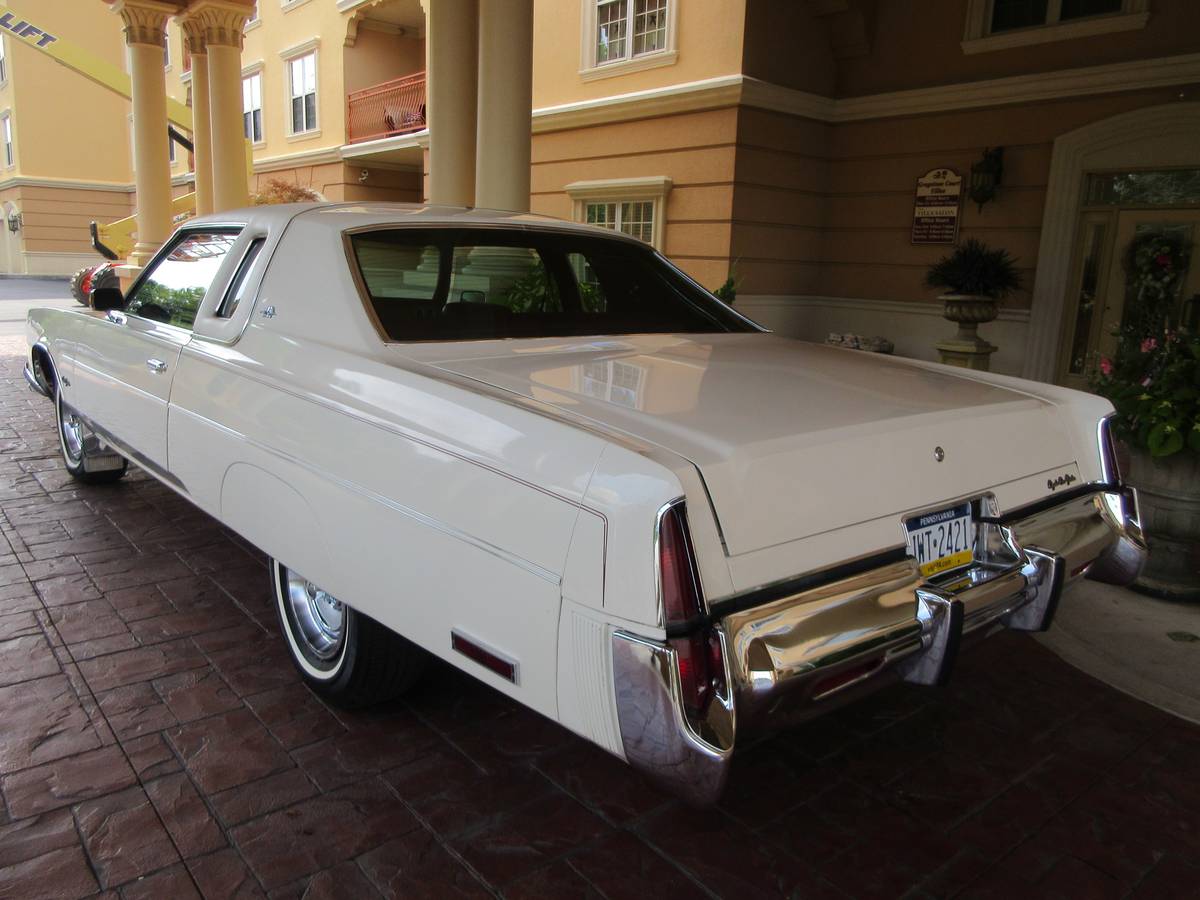 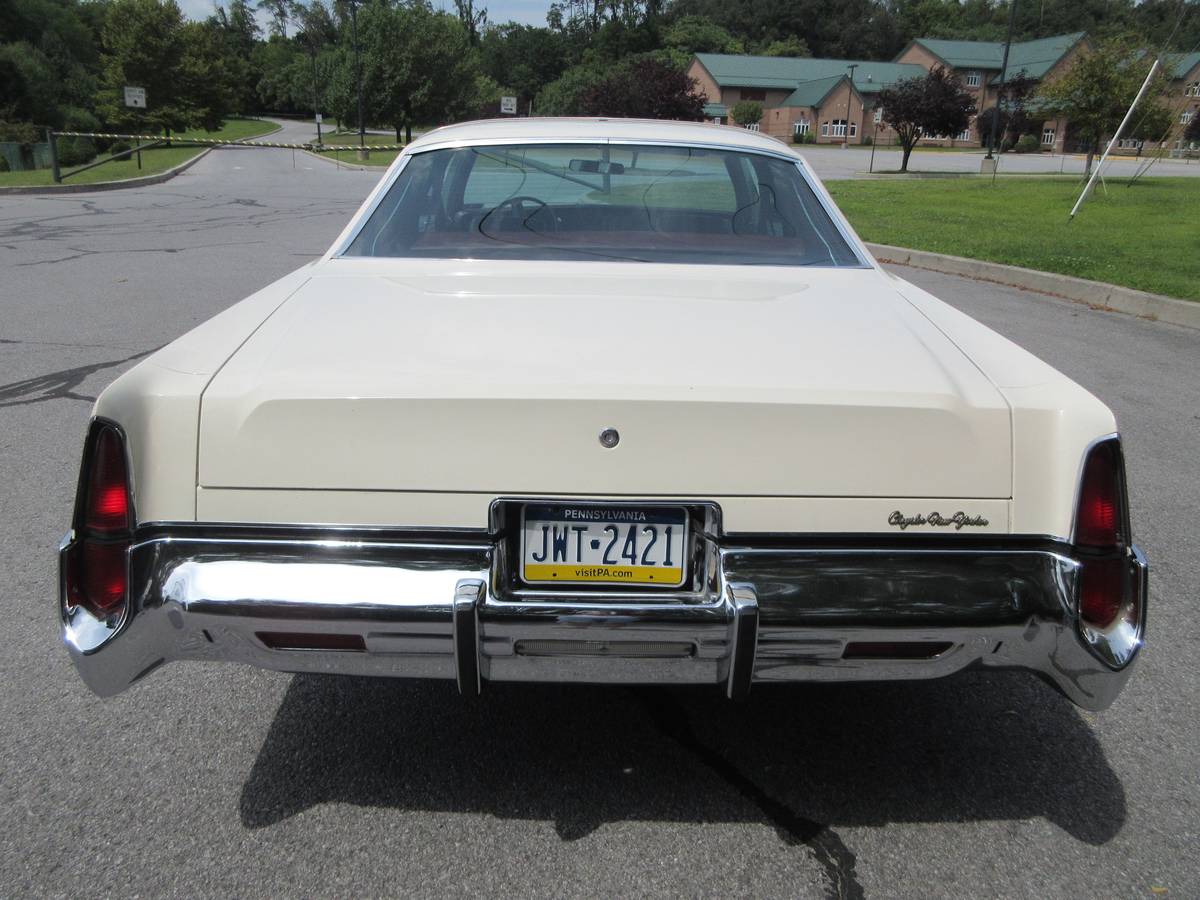 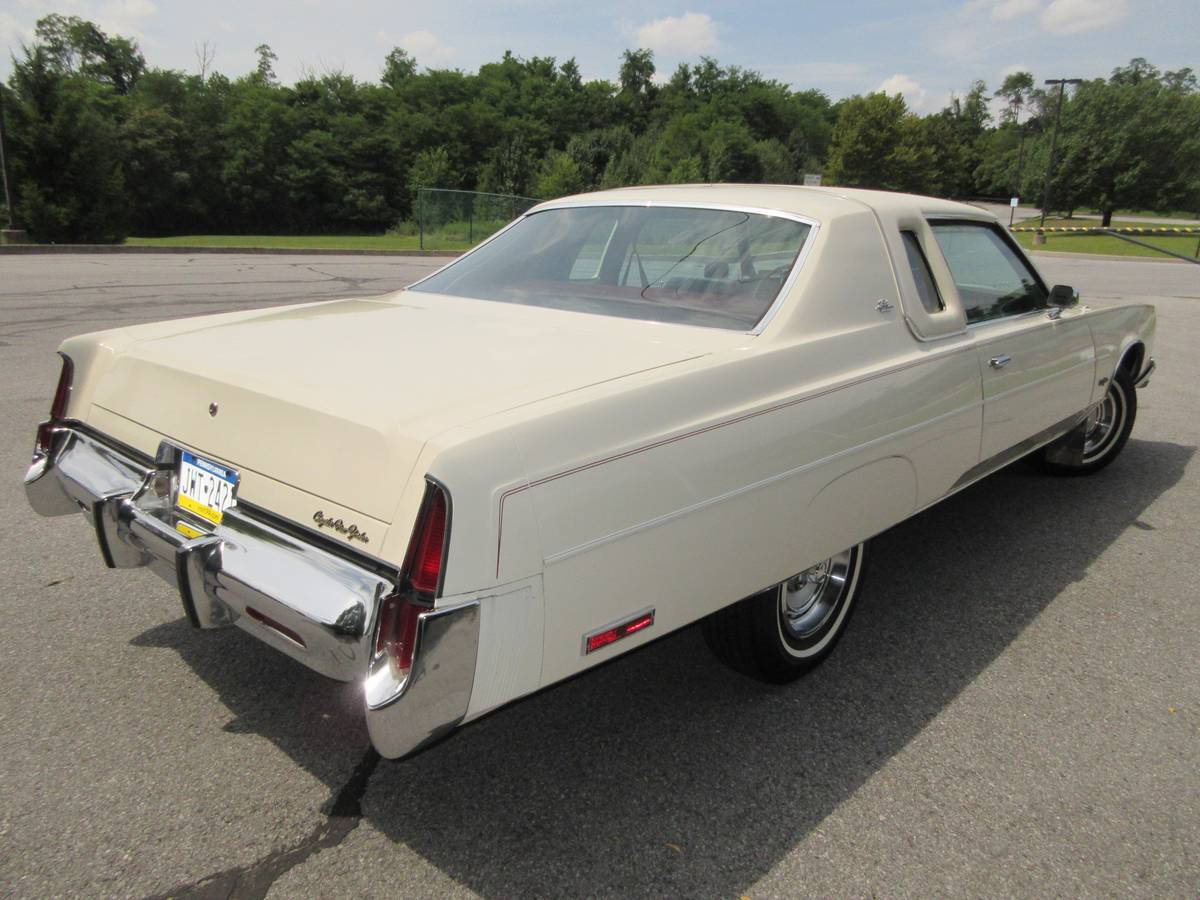 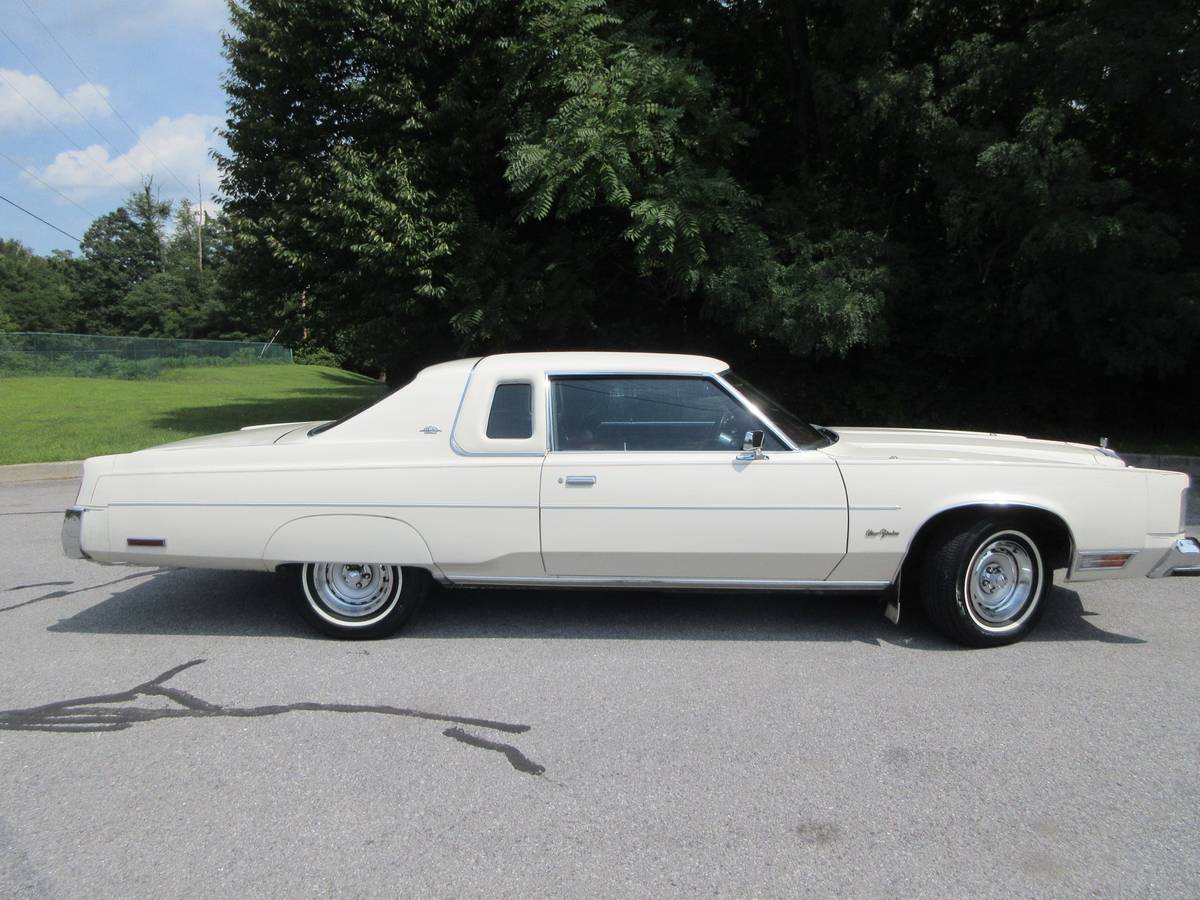 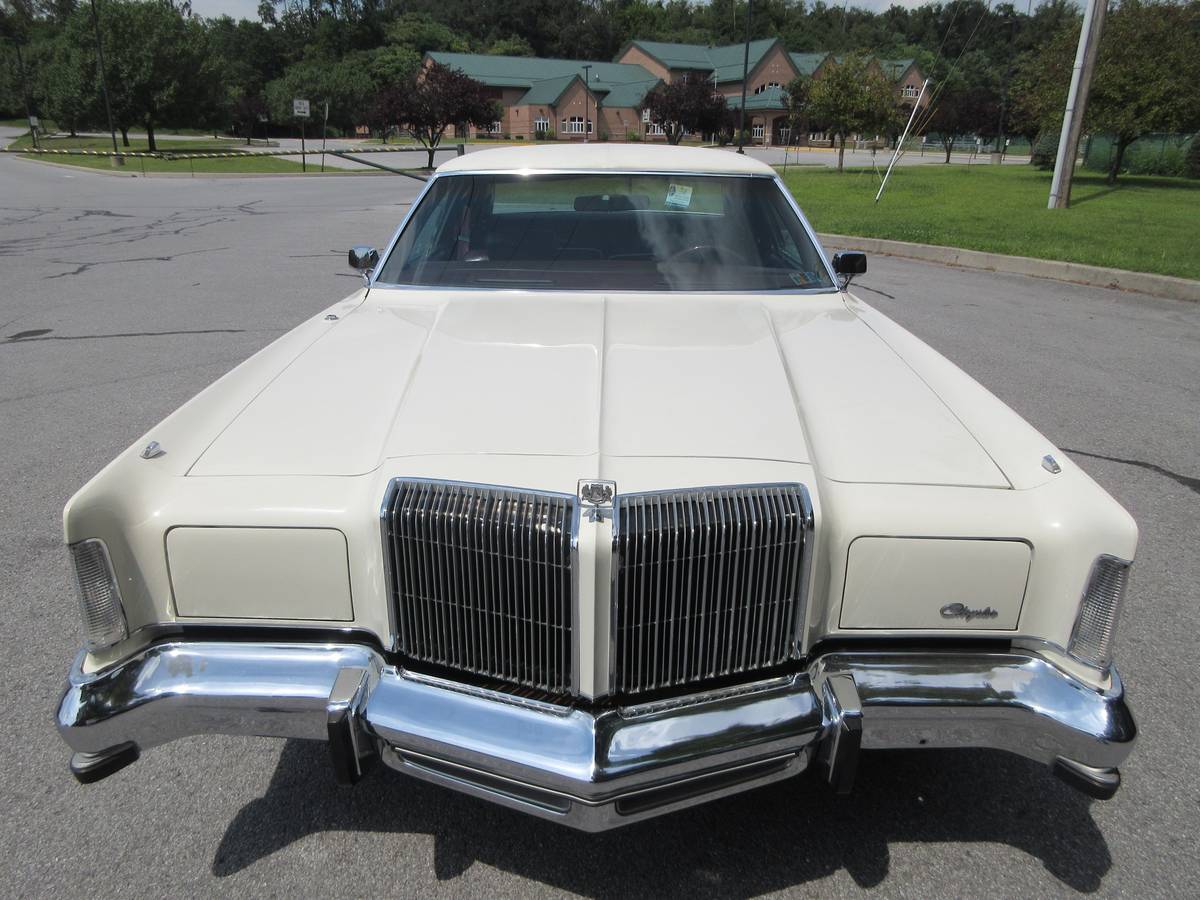 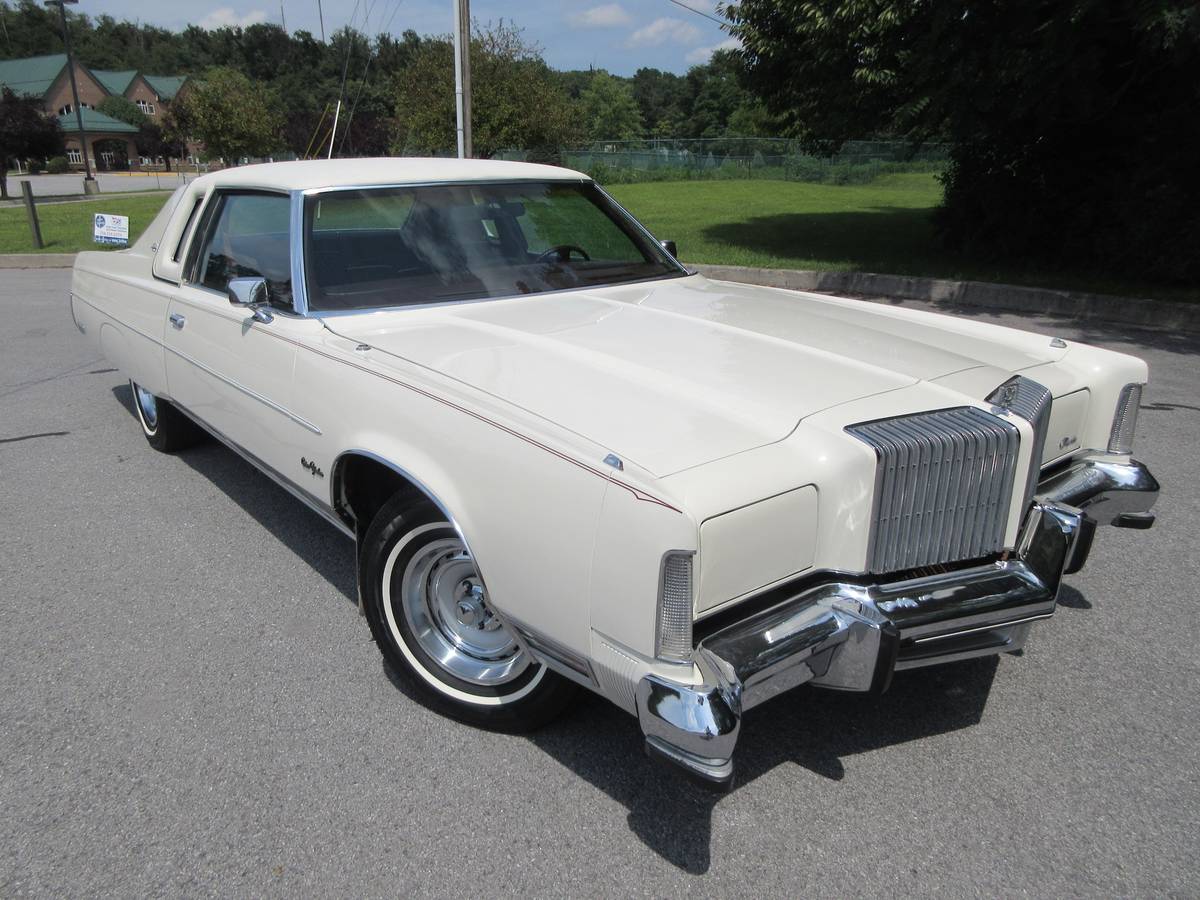 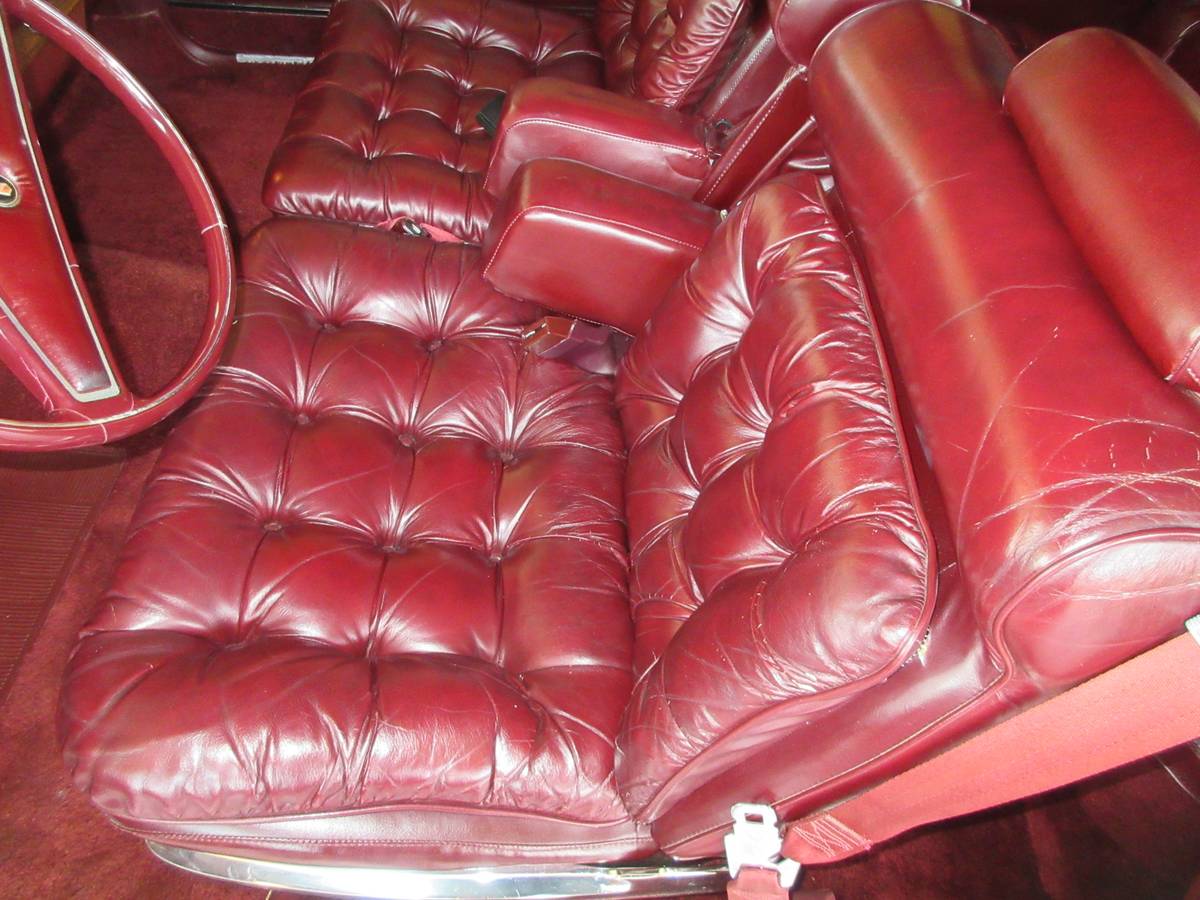 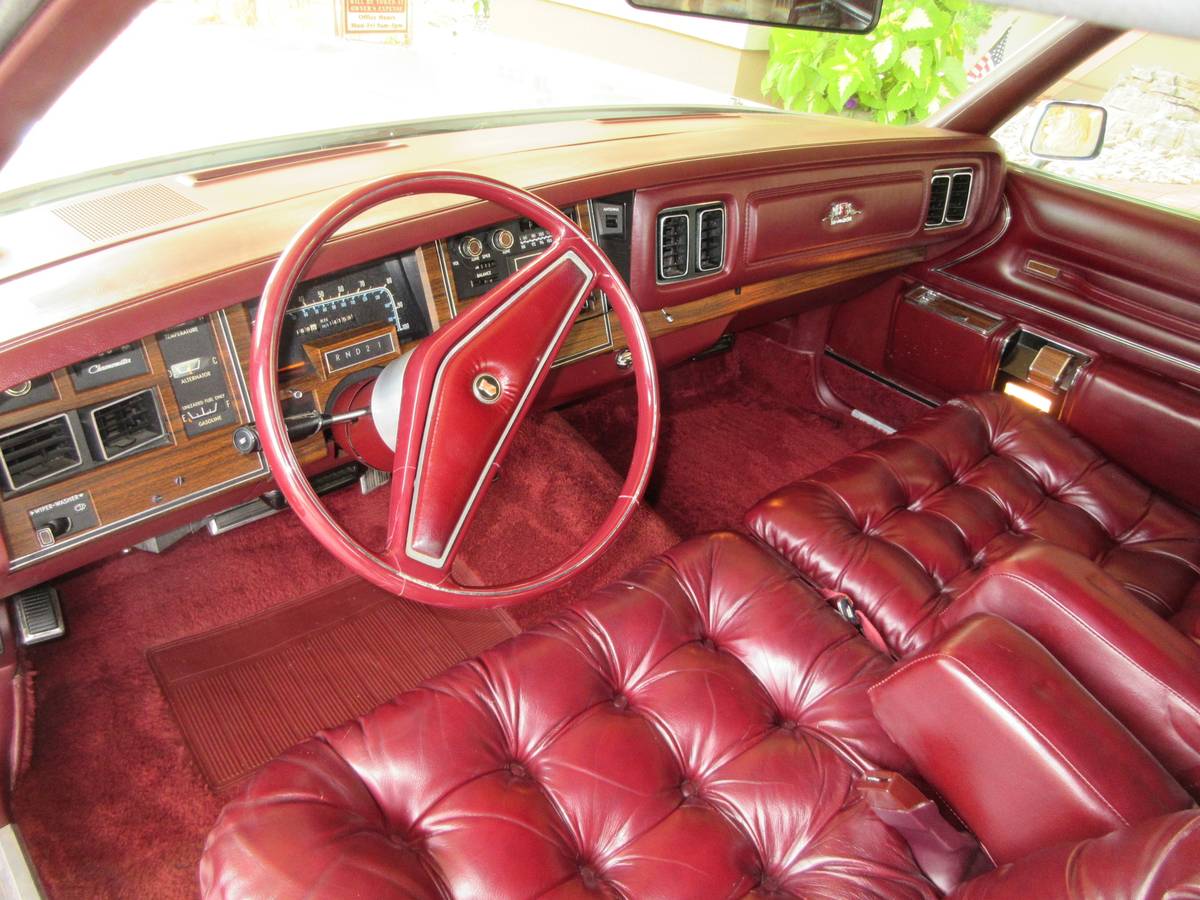 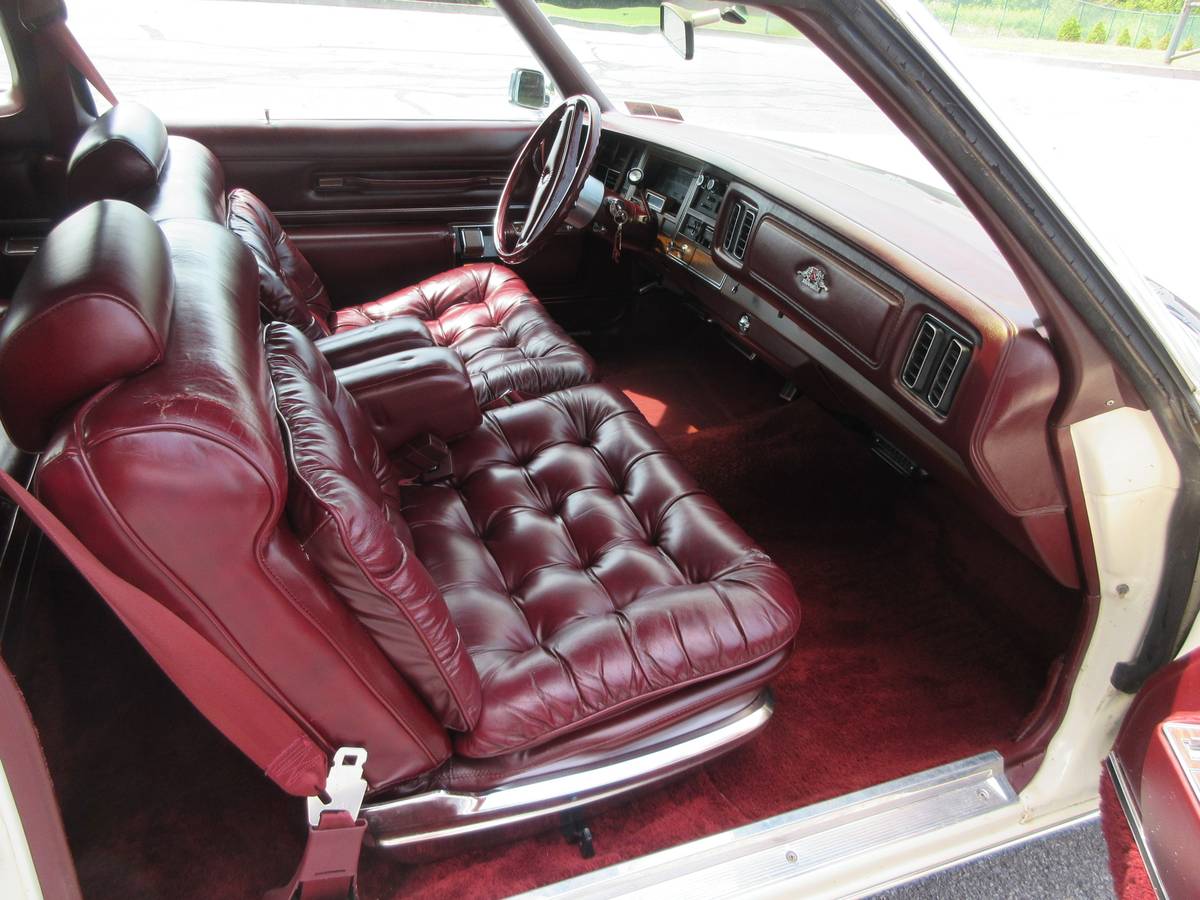 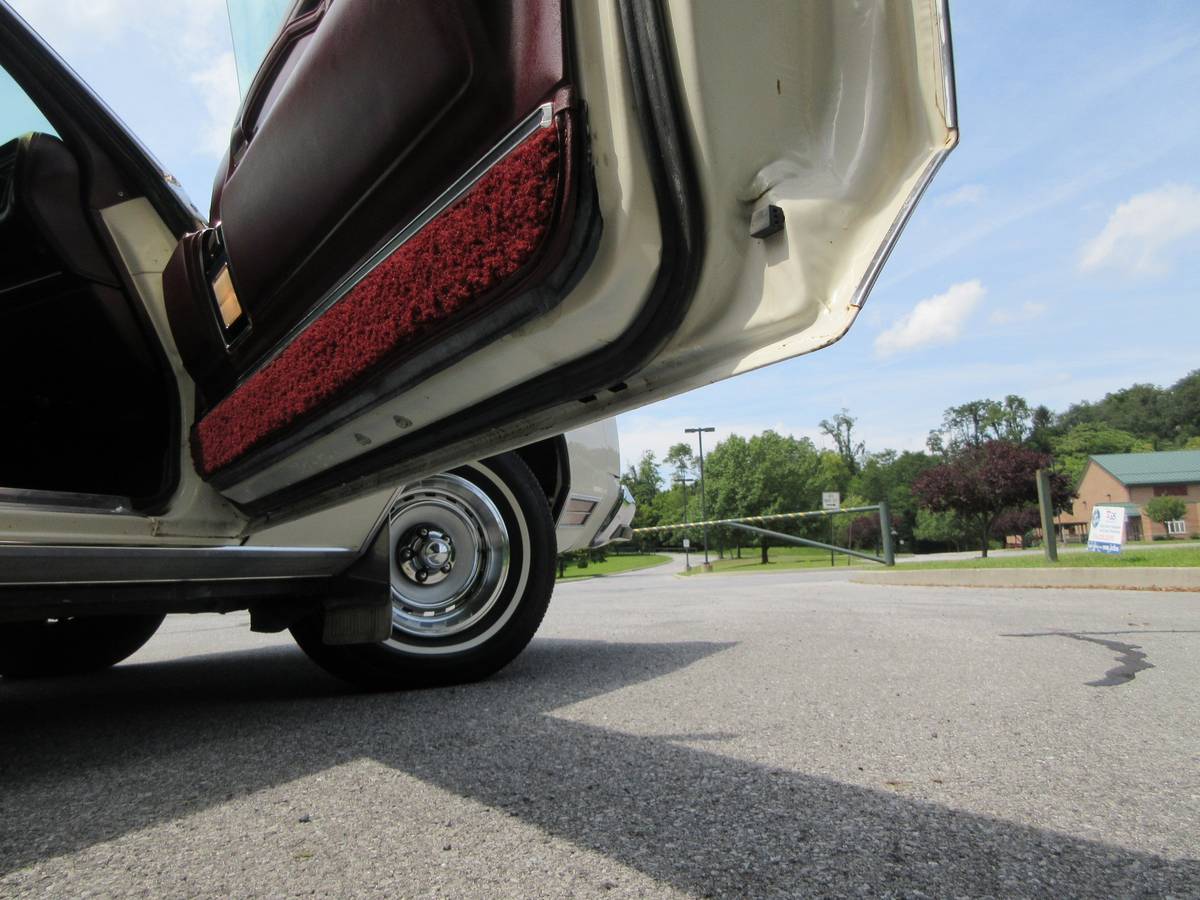 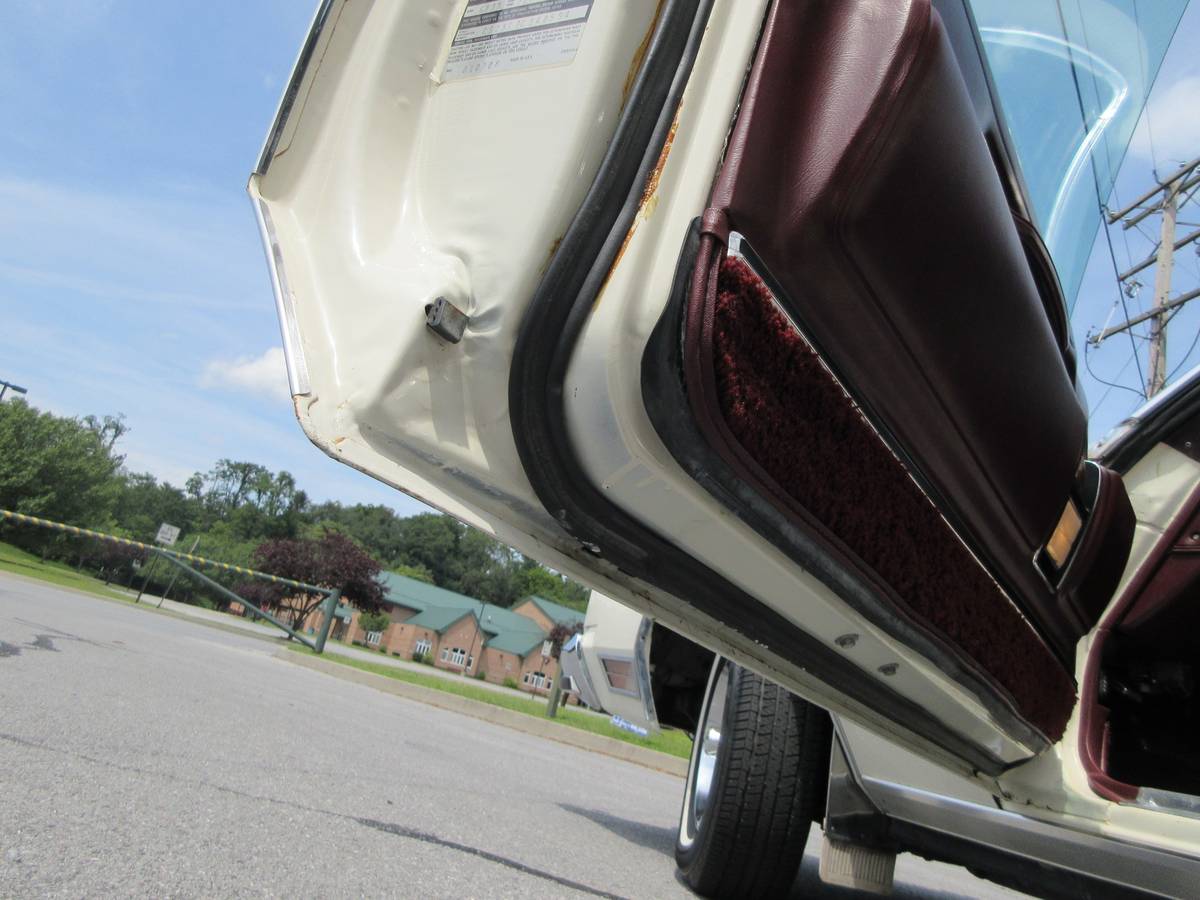 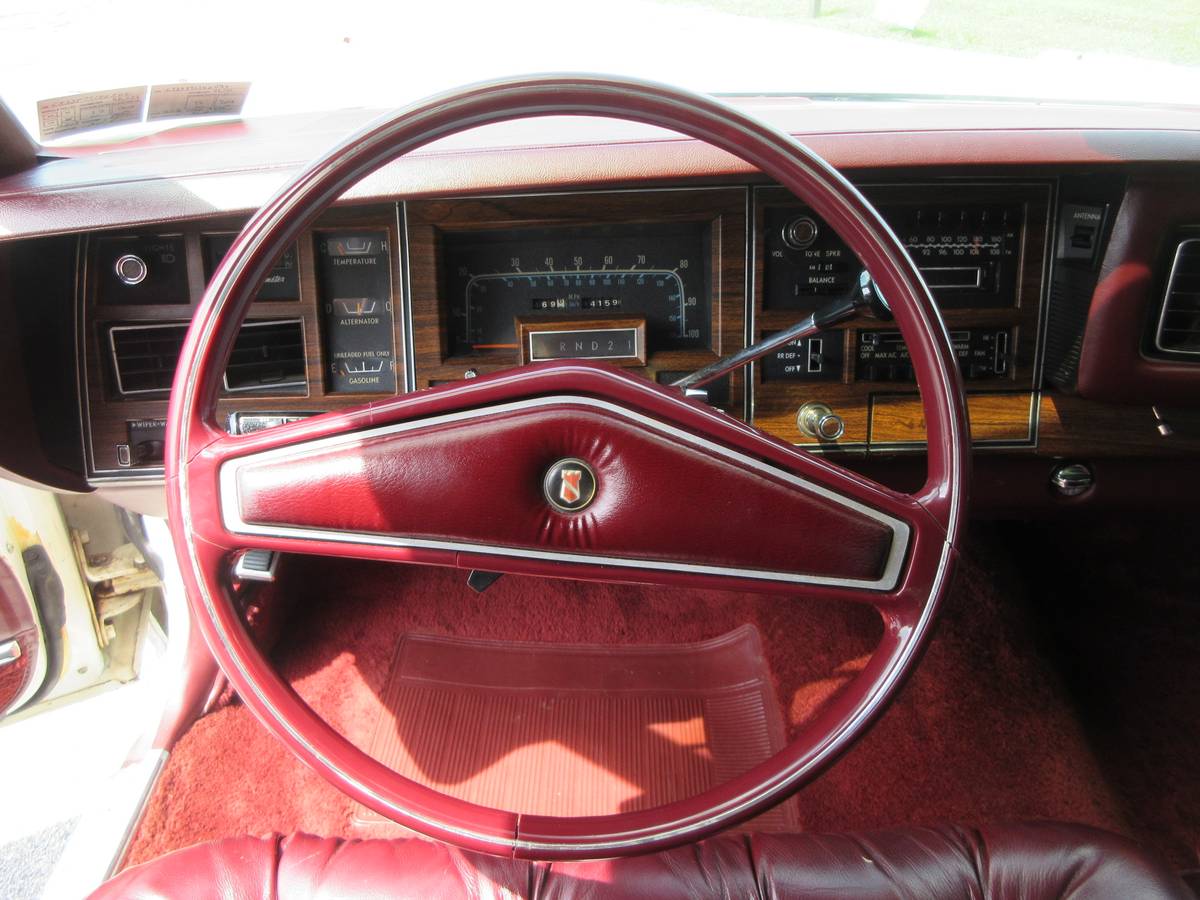 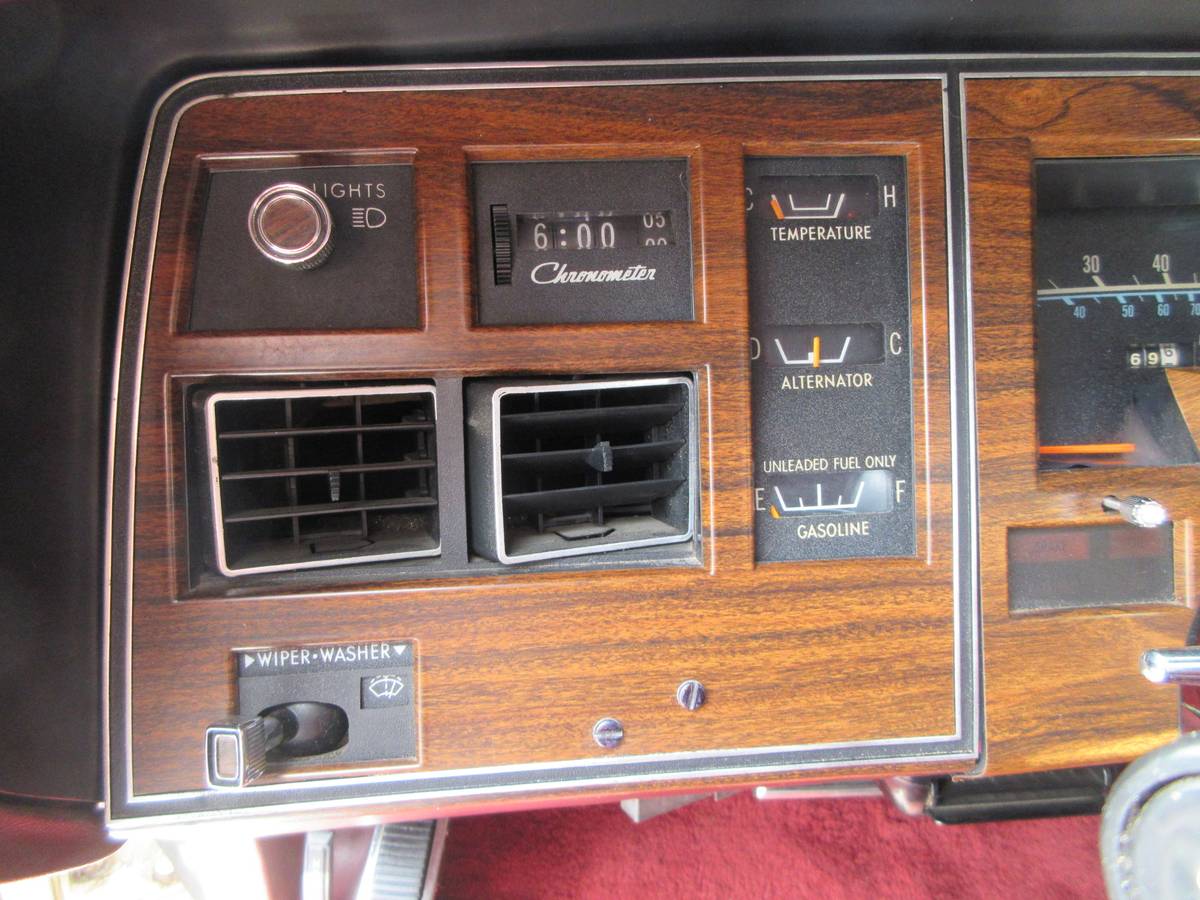 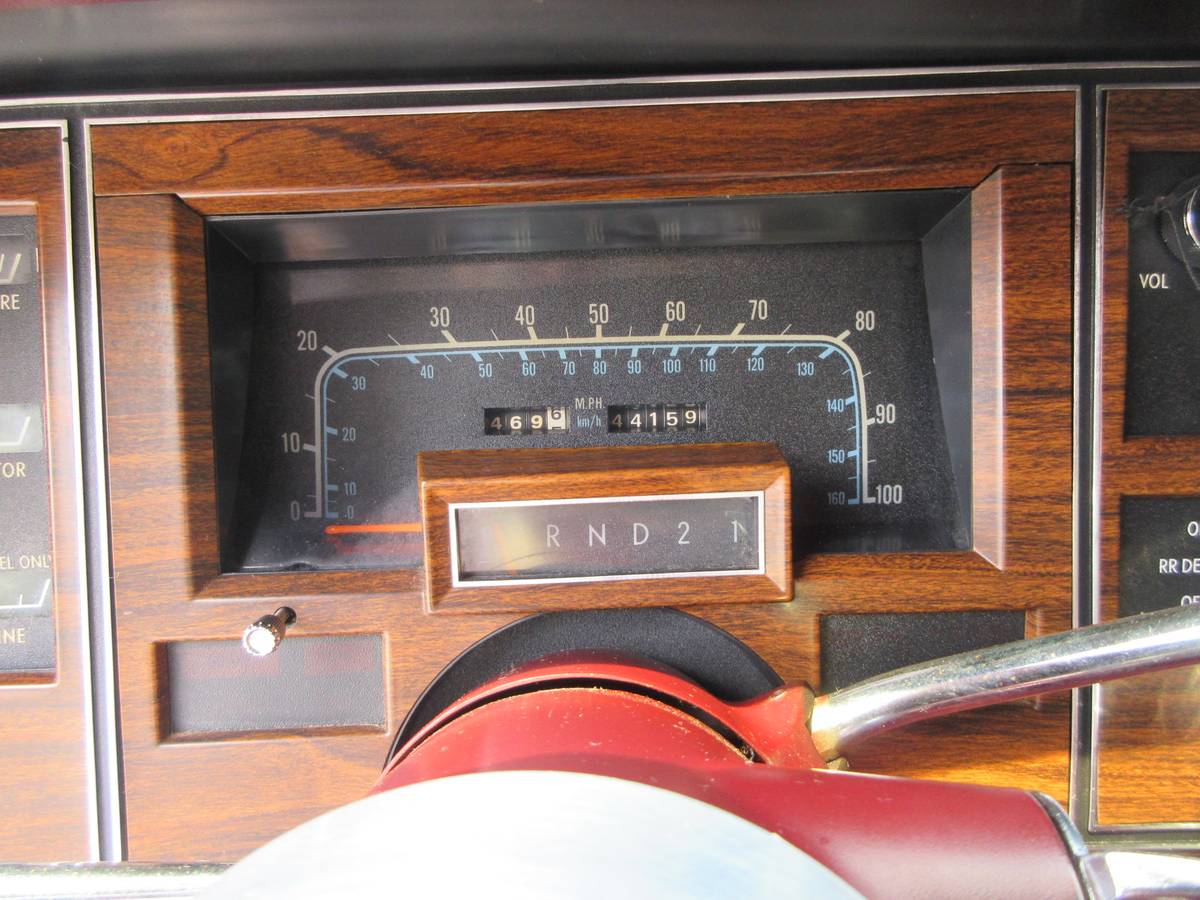 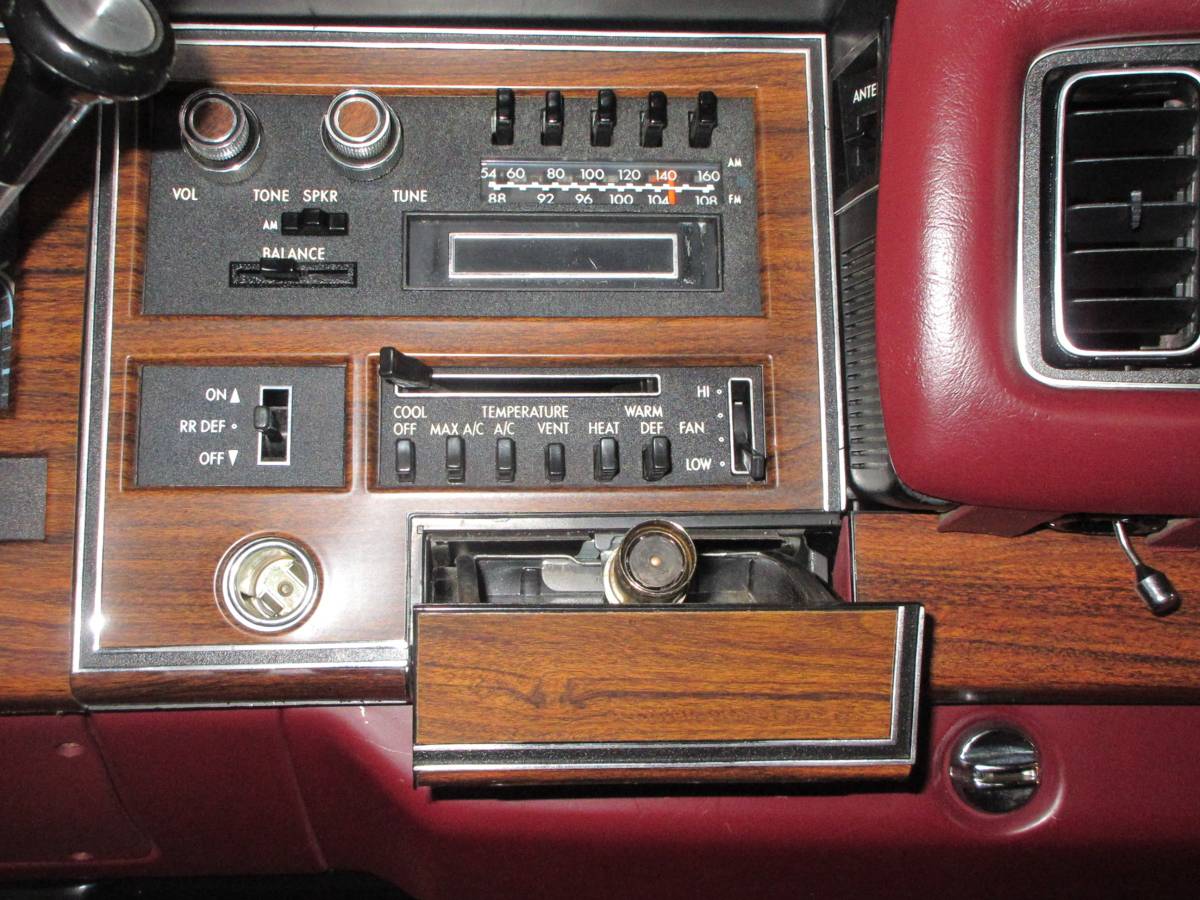 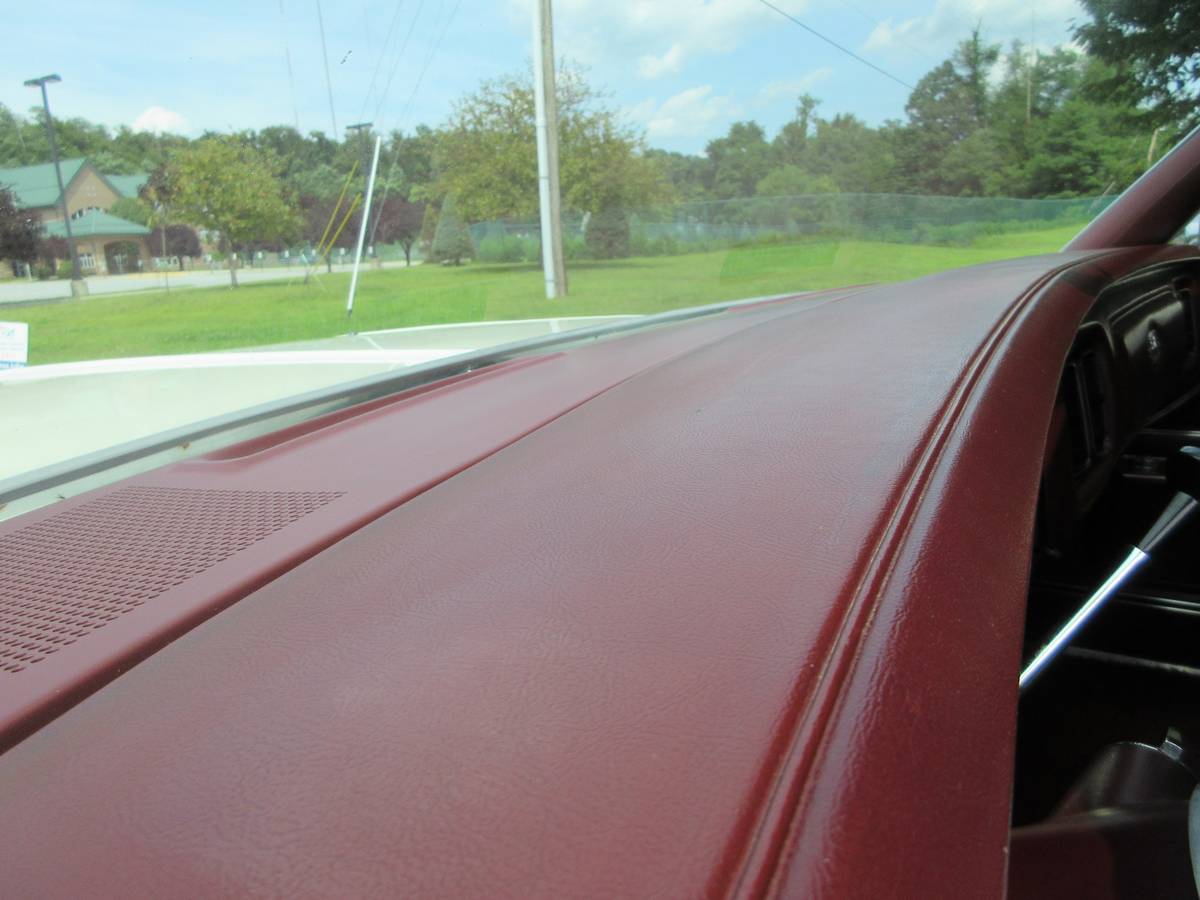 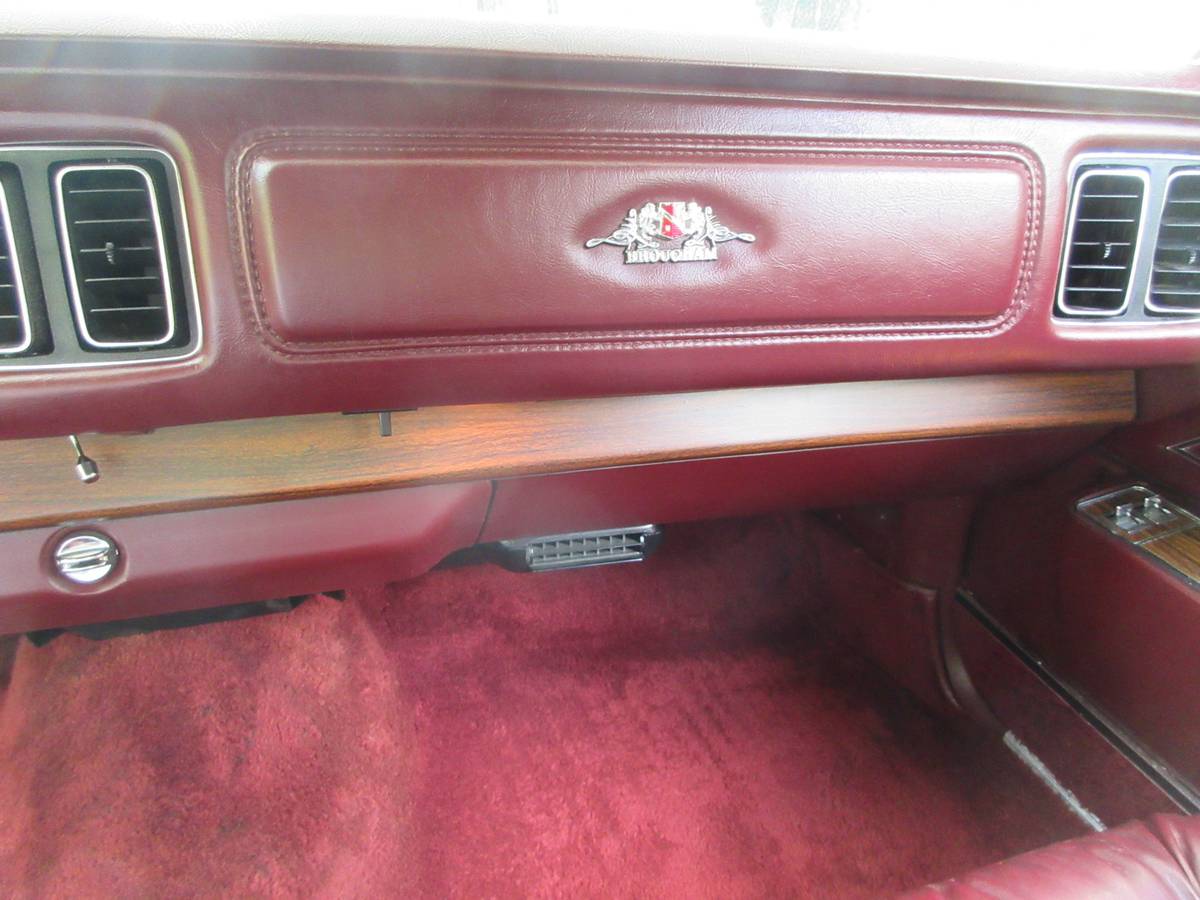 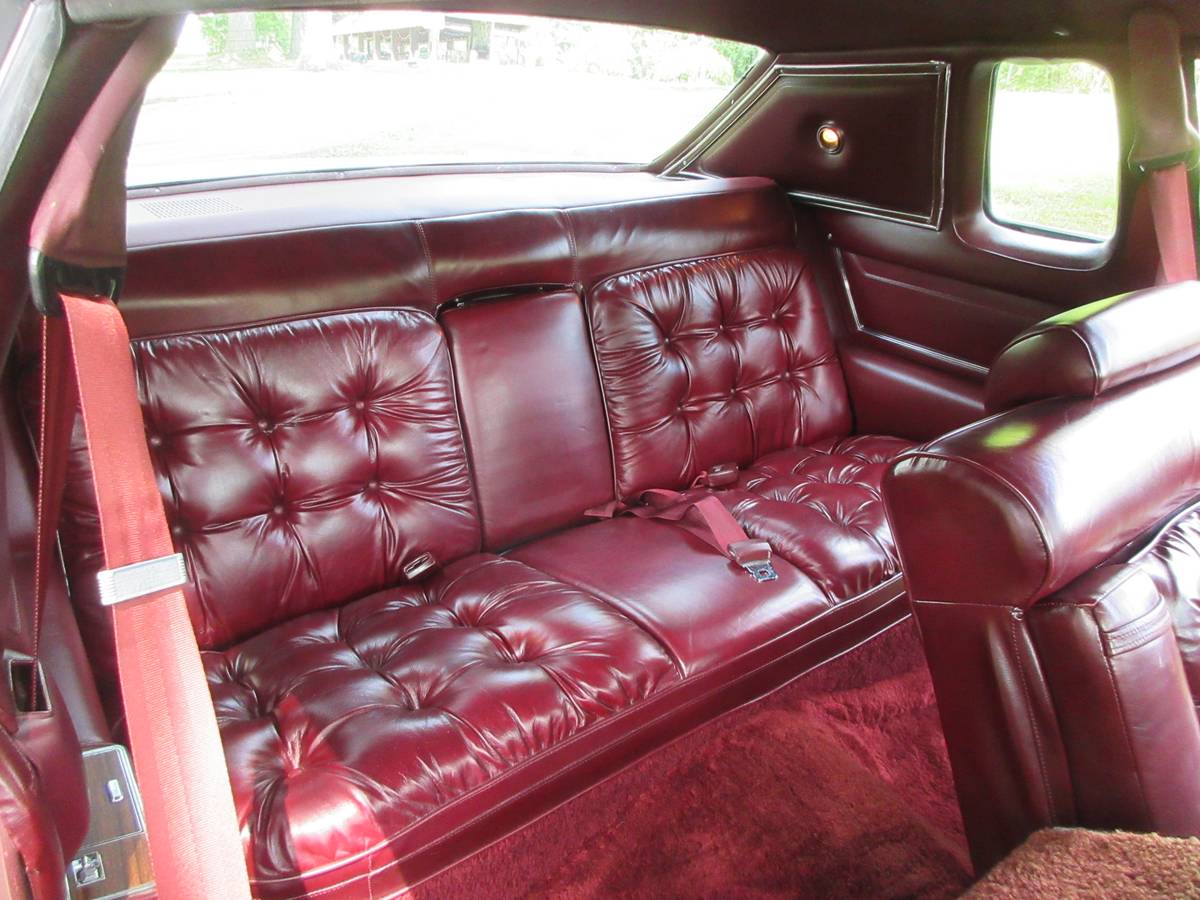 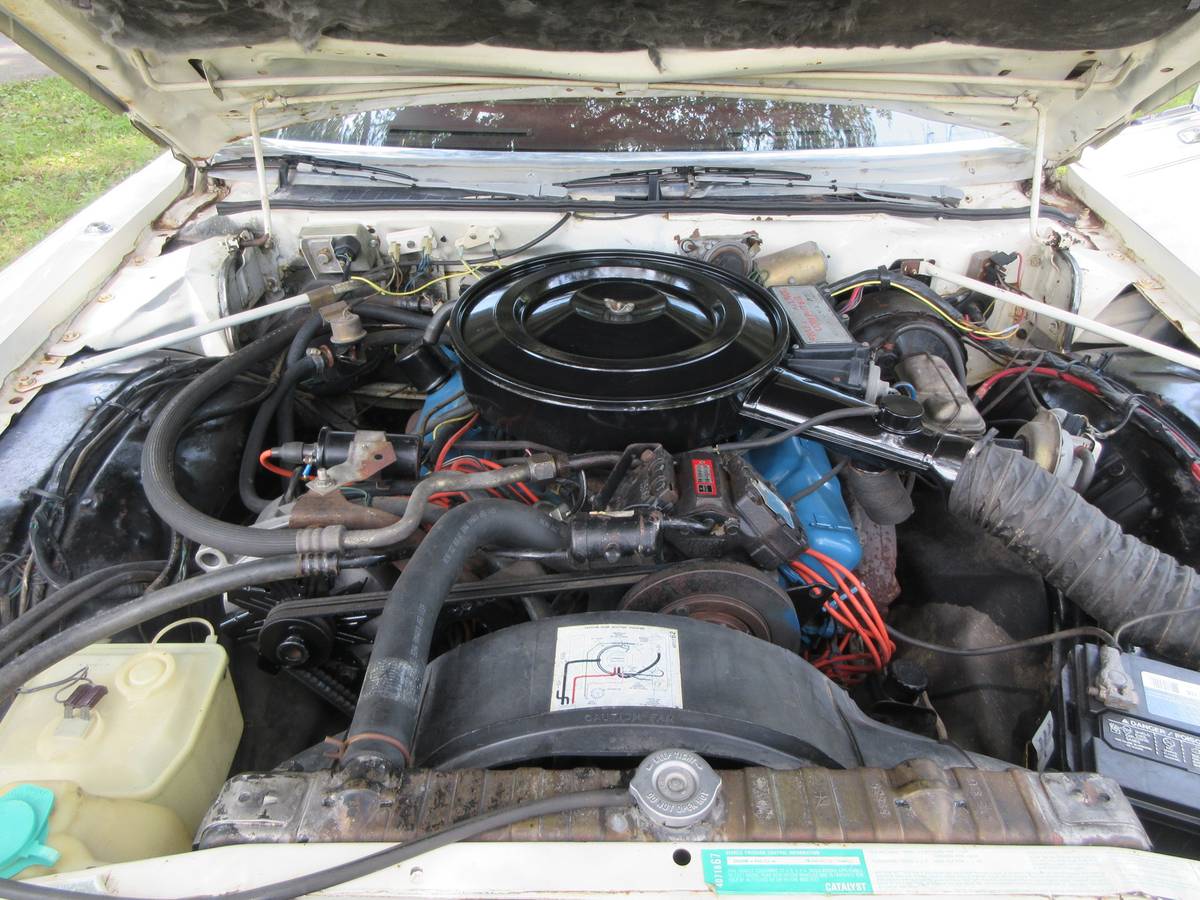 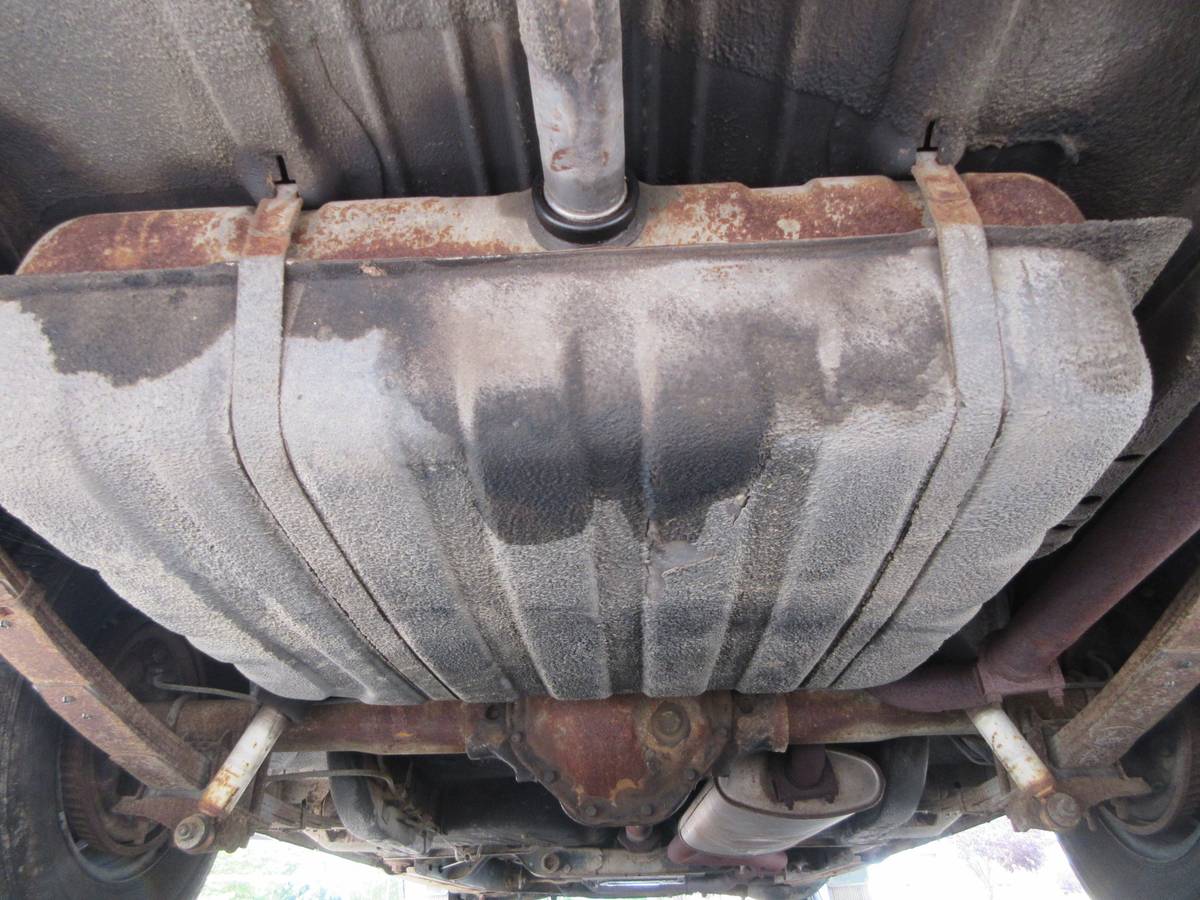 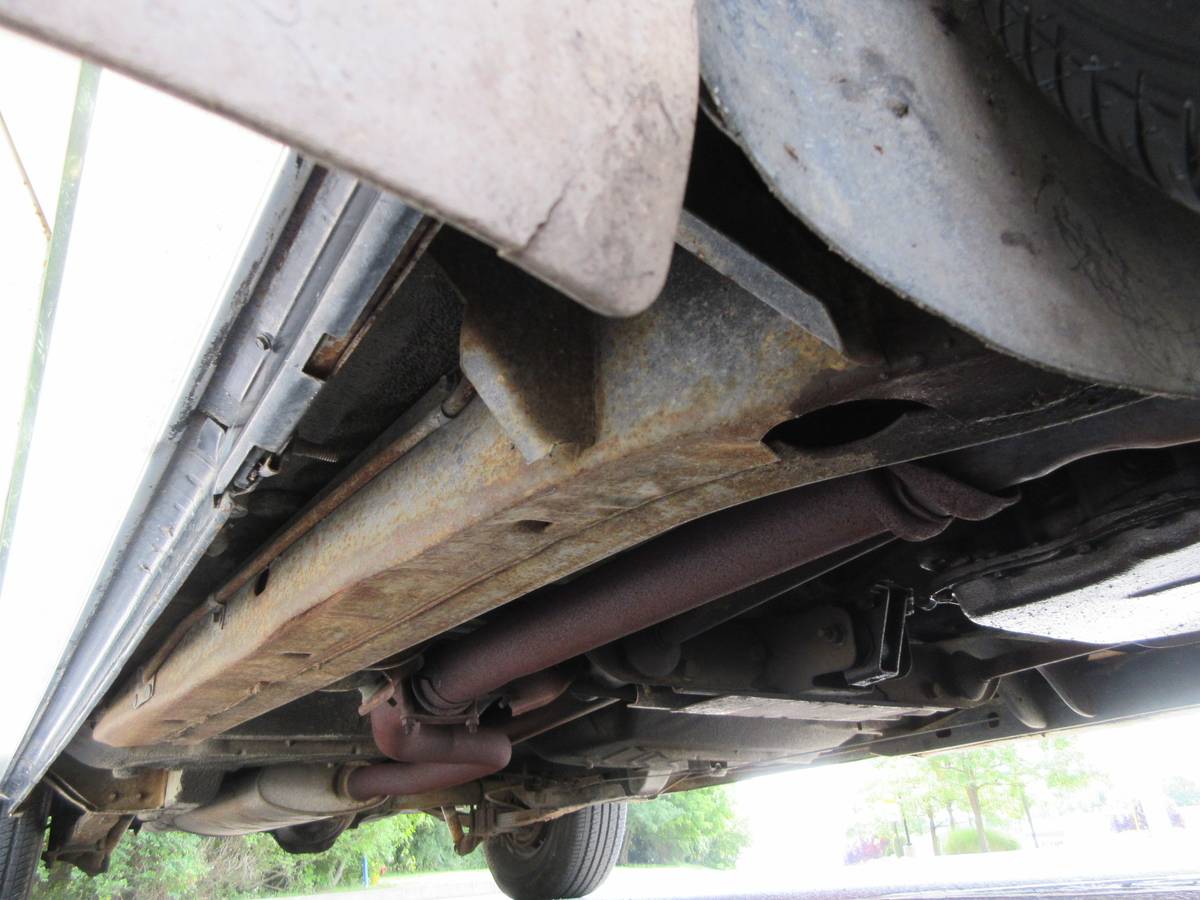 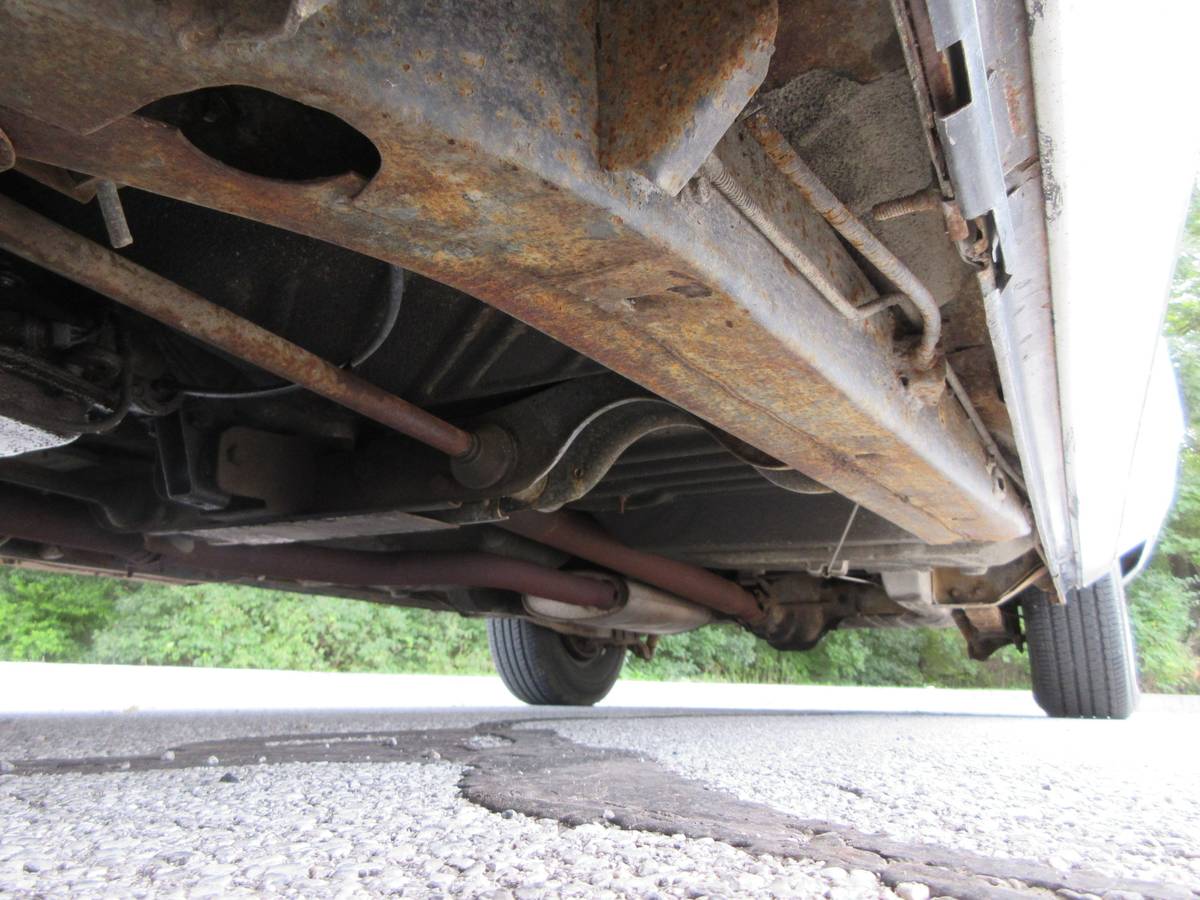 We found yet another low-mileage original survivor here on Craigslist in the form a 1977 Chrysler New Yorker Two Door Hardtop located in Altoona, Pennsylvania with only 44K original miles.  The third caretaker of this beautiful white over red leather example is currently asking $7,500 for it.  The NADA Guides Online Classic Car Valuation Tool currently lists their “Low”, “Average”, and “High” retail value range at $3,240, $5,609, and $9,720, respectively so it appears the private seller has their New Yorker correctly priced for the market.  If you are serious about buying this classic New Yorker, you can start the conversation via e-mail here.

Chrysler introduced its ninth generation full size New Yorker line-up for 1974 just as the OPEC Oil Embargo hit, so these Land Yachts quickly fell out of favor with gas usage averaging less than 10 miles per gallon.  The generation also saw the introduction of Chrysler’s Lean Burn computerized spark advance ignition system.  While we take computer controlled engines for granted today due to their superior reliability, when Chrysler launched these first systems they quickly earned a reputation for unreliability and thus many owners or their mechanics swapped out the system for a traditional points-based system.  Consequently, these 1974-1978 versions are a rare site and are even rarer in such low-mileage, original condition.  If you can fit this Land Yacht in your garage and love Mopars, you’ll have a very comfortable ride driving it between gas stations and car shows alike.  We’ve re-printed the seller’s very thorough description below for your convenience.  Good luck with the purchase!

“For sale is a gorgeous and well kept ’77 Chrysler New Yorker Brougham. It has 44,160 original miles and is documented on the title. It is graced with a padded vinyl top, beautiful spinnaker white paint, bright chrome bumpers and trim, including the optional rallye/road wheels. It features ice cold A/C (still retains R-12 freon, and recently serviced), cruise control, power antenna, AM/FM 8-track stereo (8 track is non working though), and power seats, locks, windows. It has the optional 440-4 barrel engine with a 727 Torque-flite 3 speed automatic transmission. The person I bought it from owned it since the mid-1990s in my hometown of Altoona, and soon after relocated to the Southwest and remained there until a few years ago, after which he came back to central PA. Supposedly a lady school teacher bought it new, also in my area. This car saw very little, if any salt. The mileage is documented on the title, and the condition of the car proves it.

The chrome bumpers and stainless trim are very bright and free of pitting. The original vinyl top is very nice and held up well….not faded or cracked. There are NO rust bubbles underneath the vinyl, either. The beautiful white paint still retains a nice shine. There are a few small marks/scratches here and there, but nothing major. Overall the exterior is rust free, and almost entirely bondo-free, except in a small area behind the passenger door on the lower rear quarter….I don’t think it was a rust repair but rather a dent that was fixed. There is a small shallow crease on this same area, and a small ding on the lower passenger door. Other than this previously mentioned (small) area, the paint appears to be all original. Body panels are straight, no major dings, dents, or scratches to speak of…and does not appear to have had any paint work anywhere else. There is some cracking/deterioration in the rubber surrounding the windows; however they do not leak air when going down the road. You can also see in the pictures where the beltline molding of the vinyl top has shrunk slightly from the aluminum strip. Not a major detractor but is a result of age. Chrome wheels and trim rings are still shiny and free of curb rash. I say all this at the risk of making the car sound worse than it is. Overall, the exterior is very well preserved, presentable, and reflects the garage-kept history of the car. It is a real head-turner! The pictures don’t do it justice.

The interior is like new. No evidence of any smoke smell, nor any evidence that it was ever smoked in. The leather seats are still soft and supple….well preserved and do not have any tears. Carpets are clean and free of wear, as factory rubber floor mats have protected the carpets since new. No fading, stains, rips, tears, or cracks anywhere, other than some cracks on the plastic steering wheel rim, as is common on these cars. Vinyl dash and door panel armrests are like new…no cracks. No issues with headliner. The interior is very nice and comfortable….like stepping back in time when you sit behind the wheel. All the power equipment works, except for the 8 track and the clock. The passenger visor has a vanity mirror that illuminates, however the plastic hinges on the mirror cover broke off so the cover has a tendency to fall off if you pull the visor down. Overall, the interior is very well kept and shows very well for its age.

The undercarriage is almost unbelievable considering spent almost half its life in the Northeast. Obviously you can see from the pictures it saw very little winter weather. It is very solid underneath, and free of any heavy rust. The car spent approximately 25 years in the Southwest, so it was completely free of the Northeast salt for most of its life.

I had my mechanic “go over” the car to see if anything needed attention. The following was performed within the last year:

It passed the rigorous PA inspection and is good through the end of 2019. The ignition system at one point was converted from the troublesome factory Lean Burn to a standard electronic ignition.

I would not hesitate to drive this car anywhere. I have driven it roughly 500 miles in the last year without missing a beat. All 4 tires are matching Bridgestones. They only have a few thousand miles on them, but they are old. Not dry-rotted, and ride nice at highway speeds, but a bit choppy between 30-45 mph, presumably due to flat spots on the tires. The famous 440 engine coupled with the Torque-Flite transmission power this heavy car quite well. Both the engine and transmission are smooth and drive like new. No leaks to speak of. Steering is straight (for a big boat like this) and brakes are smooth. A/C still blows cold and was recently serviced, yet retains its old R-12 type freon.

Overall:
If you are looking for a great example of the last of the New Yorker land yachts, this one’s for you. The car is beautiful and ready to be driven and shown. It is not “perfect” or “flawless”, but nothing is unless it was rotisserie-restored. As such, this car was never restored, with 44,000 miles it’s obviously been driven and has some minor flaws as described above.” 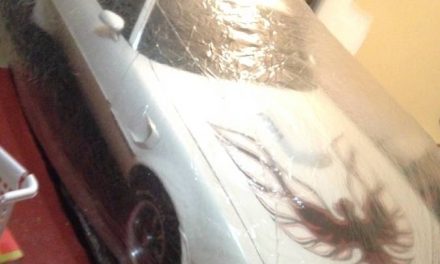 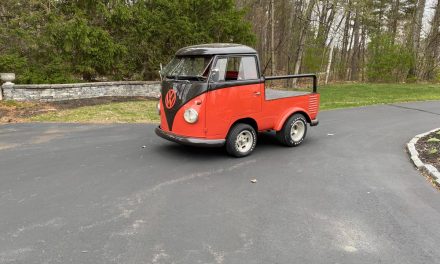 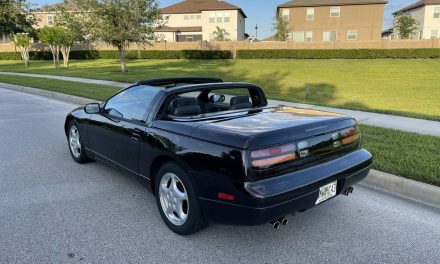 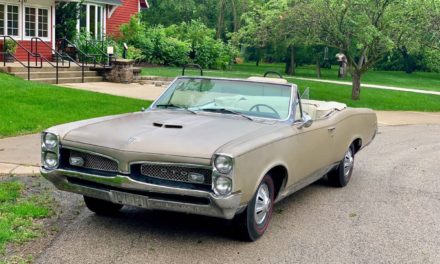