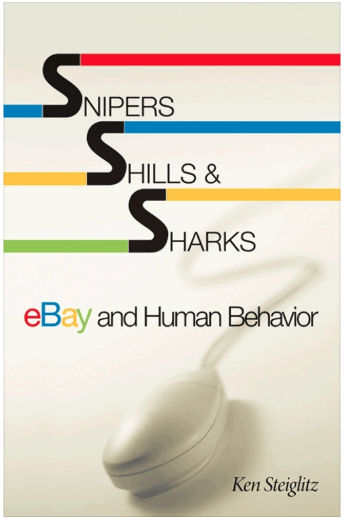 Snipers and Shills – What Are They In Auctions?

Over the holidays, we took the time to delve into auction theory and design and one of the best books we found on the subject is Ken Steiglitz’s “Snipers, Shills, and Sharks: eBay and Human Behavior”.  Ken is the Eugene Higgins Professor of Computer Science Emeritus at nearby Princeton University, so we are in the process of connecting with him in person soon to get his thoughts on the online collector car auction space. Stay tuned!

If you’ve ever participated in an eBay auction, you’ve likely heard about “Snipers” who come in at the very last second of an auction to place a winning bid.  Since its inception, eBay allows the practice and in recent years a cottage industry of software programs designed to place such last-second bids continues to do well.  With the misguided perception that snipers steal away potential bargains, online collector car auction sites have copied Bring A Trailer’s lead by adopting a “Going, Going, Gone” rule where the end timer is reset to several minutes each time a last-minute gets placed.  We disagree with that practice and believe it artificially inflates the prices of collector cars.  We will cover this in more detail in our third installment next week titled, “eBay is really a Second Price Auction.”

Shills on the other hand are more a more dubious concern, particularly in online auctions where you can’t see who your fellow bidders are.  In traditional English style (i.e. highest price wins) auctions with reserve prices, Shills are plants within the crowd who enter bids with the intent not of winning but solely to artificially increase the price of a good.  While the practice is allowed among a number of traditional auction houses, they are quick to point out these “Off The Wall” or “Chandelier” bids are only done up to, but not above, the item’s reserve price.  They can rationalize it any way they want, but from our perspective its seems like a dubious way for people to pay more for an item than they might otherwise in a No Reserve auction setting.  While Shills are known to exist in art and other traditional collectible auctions, we don’t have much information on whether its common in collector car auctions.  In theory, about the only guarantee against it are No Reserve auctions such as Barrett-Jackson.  However, there’s nothing to say private sellers and dealers alike can place their Shills to move the price upward.

In online auctions, to their credit eBay has a specific policy in place forbidding the use of Shills on its site.  Unfortunately, collector car auction sites such as Bring A Trailer do not have a formal policy prohibiting this and with Dealers mixed in with private buyers, the potential for you to being played to bid higher is real.  What can you do to prevent from falling victim in these current auction formats? Simple:  postpone placing your bid until after the seller or auctioneer indicates the reserve is off.  Once the reserve has been achieved, there is a risk the Shill would then have the highest bid, which effectively means the seller just bought their collector car from themselves.

While it may be nerve-racking to wait that long, in the online collector car auction world currently, that’s the best way to protect yourself from over-paying.

We’d love to hear your thoughts and perhaps even experience on Sniping and Shills.  Comment below and let us know!