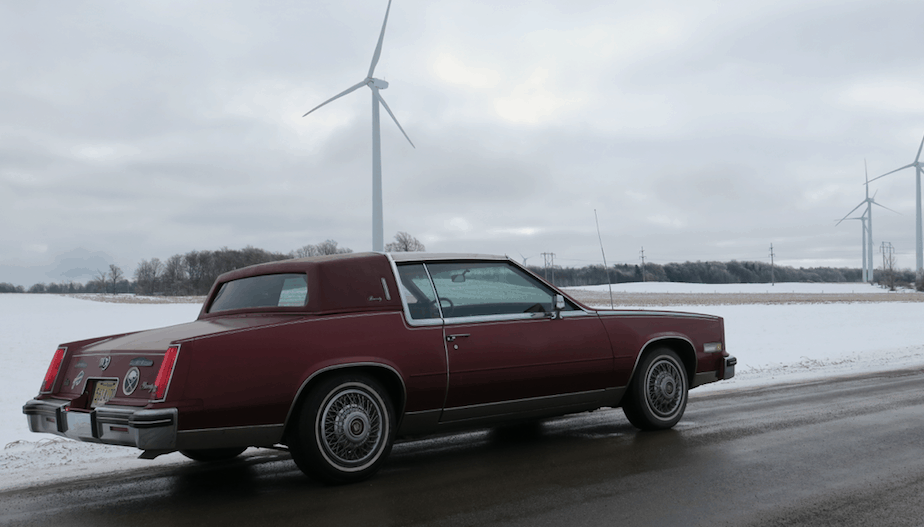 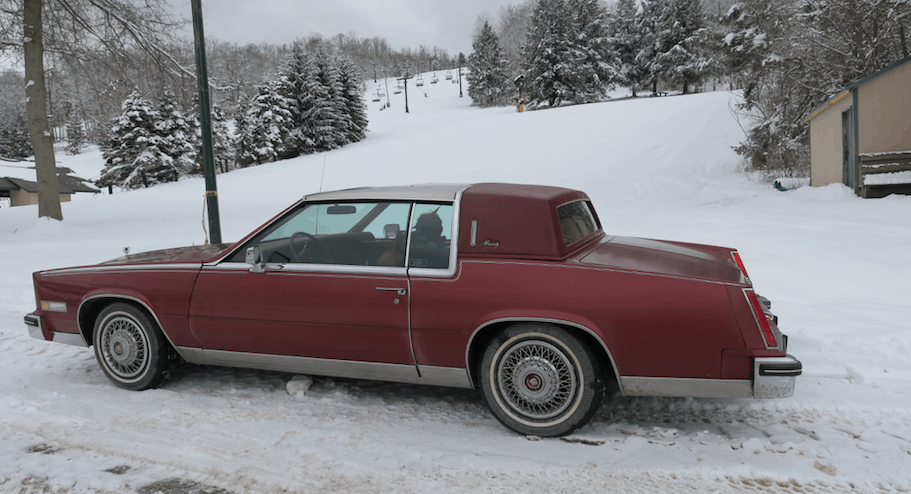 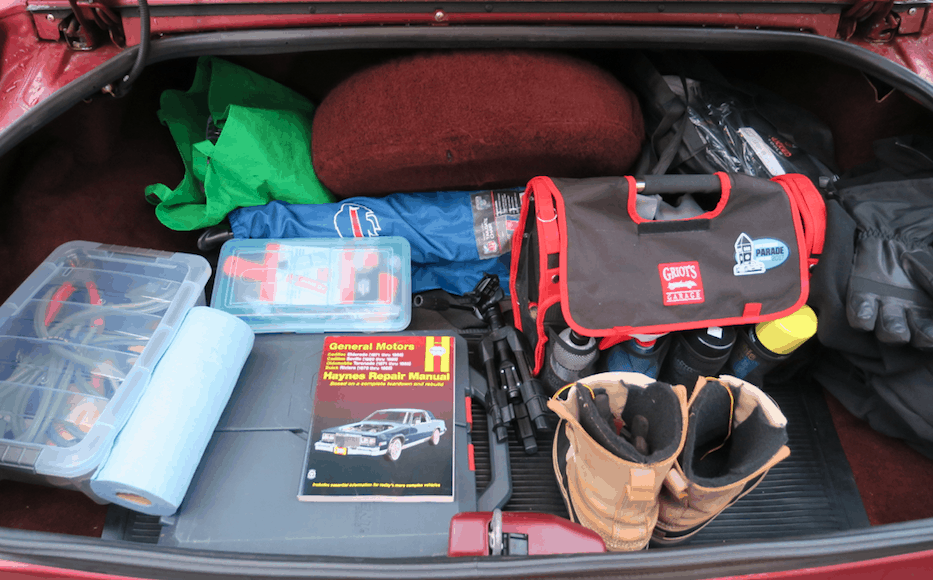 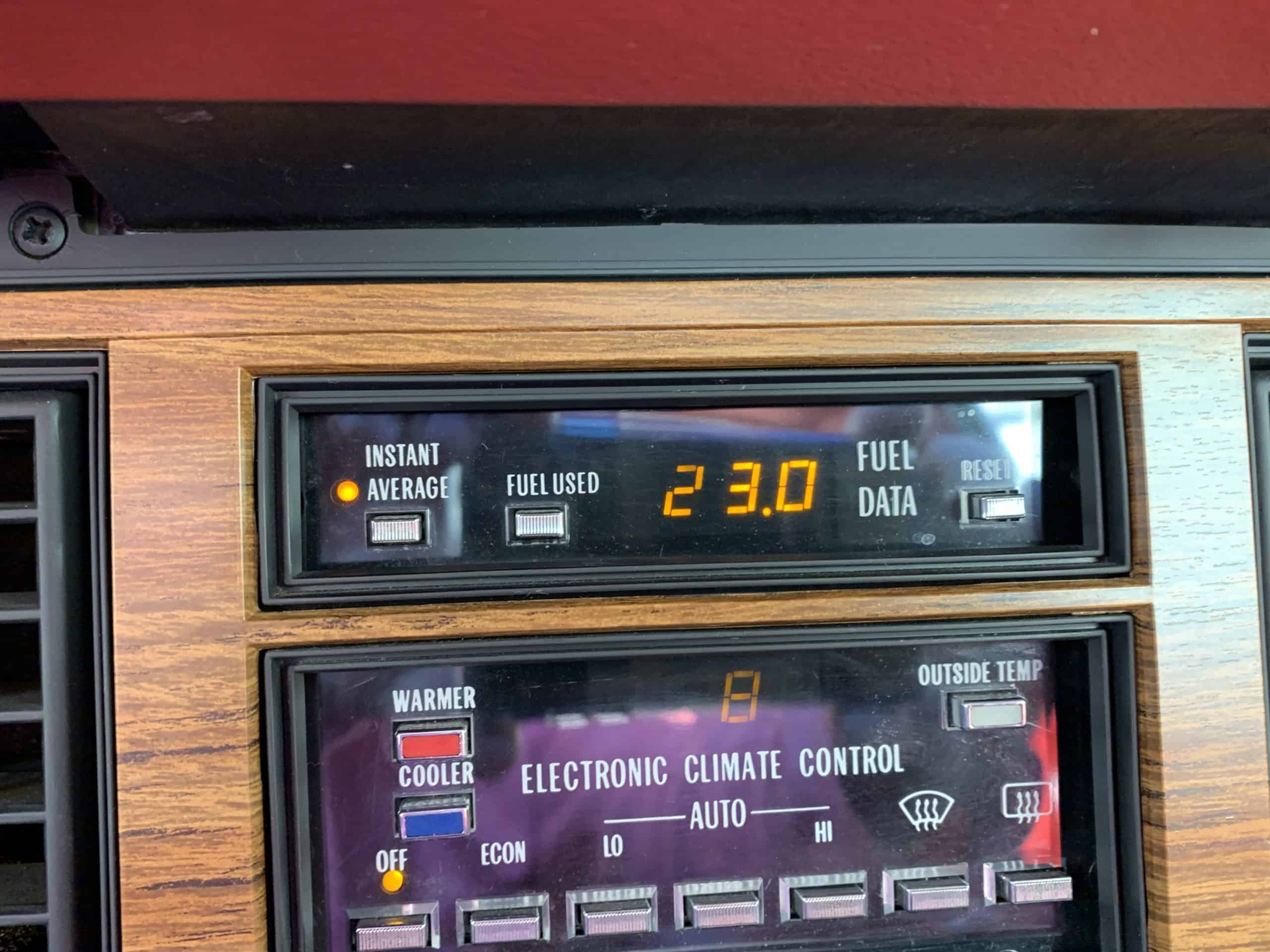 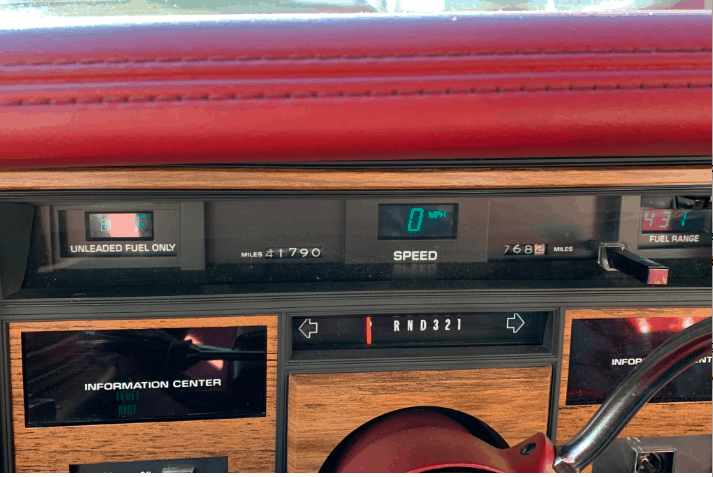 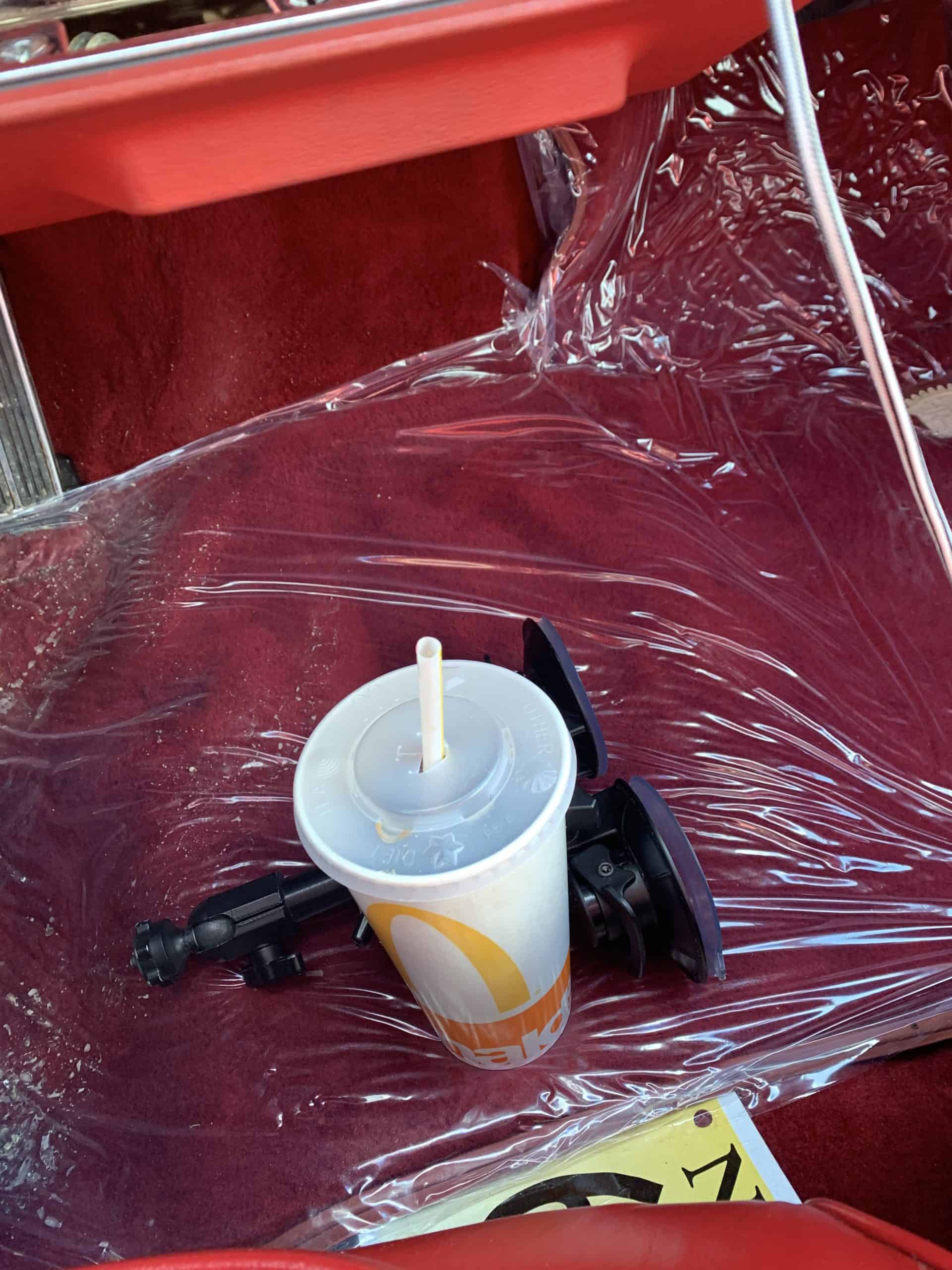 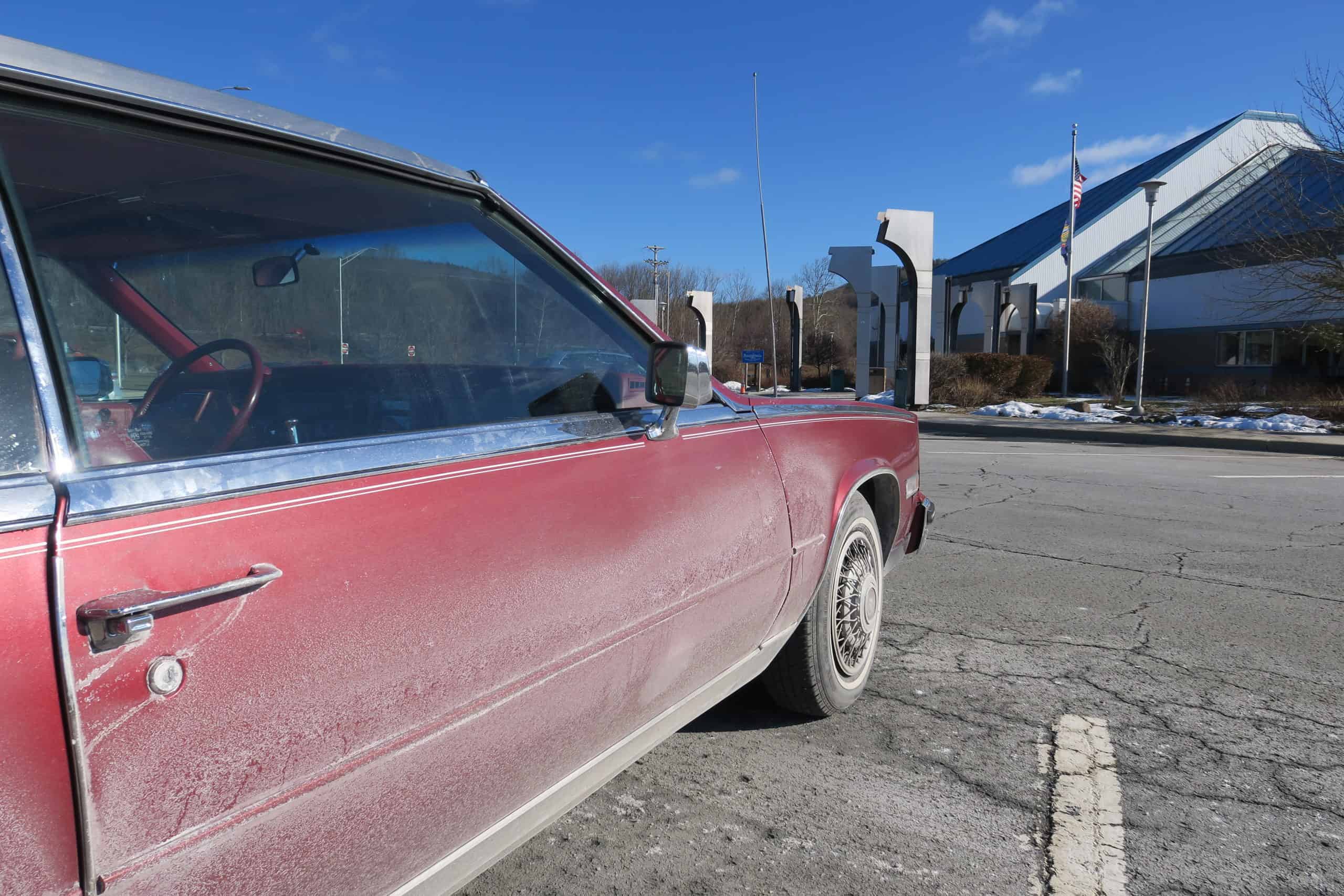 Starting the GuysWithRides franchise over the past year left little time to visit my mom in Buffalo.  While she still enjoys driving and remains capable of making the trek to New Jersey several times a year, it was my turn to visit up there for her birthday as I hadn’t been back to Western New York since last Mother’s Day.

Normally a trip back to Buffalo in January would have me packing up our ’06 Porsche Cayenne SUV to handle the variety of conditions normally encountered that time of year.  However, an unseasonably mild winter left Erie County with an abnormally low 50 inches of snow all season (the region received over 63″ of snow last January alone) combined with no storm warnings had me looking past the Cayenne and at the vehicle with the lowest mileage in our fleet:  Our 1984 Cadillac Eldorado Biarritz Hardtop with only 41K original miles.

No anti-lock brakes, traction control, or air bags.  Just body-on-frame front-wheel-drive and a fresh set of white-wall, all-season tires to get me there and back.   The power train and tires combined with a now fully-functional power seat, a new alternator, and a sorted brake system gave me confidence to shuffle off to Buffalo in RADwood-eligible comfort.  All I needed now was to pack the Caddy’s large truck with my typical road side tool essentials:  portable tool kit, zip-ties, duct tape, warm clothes, and a service manual.

Shortly after publishing the latest Guys With Rides daily newsletter, I headed out on a cloudy Monday morning.  Six hours and 355 miles later I found myself back in Western New York without any problems encountered.  After spending six hours behind the tilt-and-telescopic steering wheel of one of Cadillac’s last, albeit downsized, land yachts, I made a number of observations about driving a 36 year old car after being spoiled for so long driving modern cars.

Dude, where’s my keys?  The ’84 Eldorado relies on two gold keys to get you in and out of the vehicle as well as start it.  I quickly found myself turning around at every stop realizing I forgot to lock the car.  However, the lack of a modern key fob meant I actually had to go back to the car and lock it from there.  Conversely, it meant I always had to confirm the keys were on my person before I left and locked the car.

Cigarette Lighters 4, Cup Holders 0:  this Cadillac harkens back to a time when people were more concerned more about keeping their nicotine addiction in check than staying hydrated.  However, in the Eldorado’s defense, the flat floor combined with a very smooth ride allowed me to carefully set a drink down while highway driving.

No Power, Baby:  when new, the HT4100 V8 in this Cadillac was rated at only 135 SAE net horsepower.  Traveling through the Poconos and the rolling hills along Route 20A in Wyoming County, New York I found myself flooring the gas pedal simply in order to maintain a decent cruising speed.  As I always drive a car within its limits, this Cadillac has me taking drives at a very relaxed pace…one that my wife Nancy prefers versus when I’m driving our Cayenne.

The seats are really couches: the nearly flawless red leather interior looks like it belongs in a Lawyer’s office, yet its much more comfortable than what you might find there.  The soft cushy leather combined with the vast open space to the right of the gas pedal left me feeling not fatigued even after six hours.  The only downside was the fixed position of the roof-mounted shoulder belt which left me constantly adjusting the belt away from my neck.  Perhaps a reduction in my belly fat over the next several months will improve this.

I miss the open feeling of hardtop styling:  if you watch some of the video episodes detailing the progress of the Eldorado, you’ll note how open the interior feels with the unobstructed hardtop styling.  While the view out the rear window leaves a bit to be desired, the sides and front have an open feeling lost in the safety regulations of a modern car.

After spending a enjoyable Tuesday celebrating my mom’s birthday with her, Wednesday morning it was time to head back to Jersey.  The only new noticeable item during the sunny return drive home was the realization the Caddy’s climate control system relies on air conditioning even when its cold out.  While the climate control worked fine on cloudy days, it quickly became apparent the lack of good old fashioned R-12 Freon in the car’s air conditioning system caused the interior to heat up to sauna levels.  Luckily a dear friend who happens to be a retired HVAC engineer still has a small supply of Freon and the proper tools to install it, so we’re hopeful the low-mileage system in the Eldorado is just in need of a charge rather than a repair and subsequent conversion to R-134a.

As the end of our trip together approached, I realized that with only 40K original miles when we bought the car in October, this Eldorado averaged less than 4,000 miles annually and its very likely this was the first time the car had ever left the tri-state area.  Perhaps it was more eager to do a road trip than me, but whatever the cause the Eldorado proved itself to be a great classic car still capable of traveling long distances without excuses.