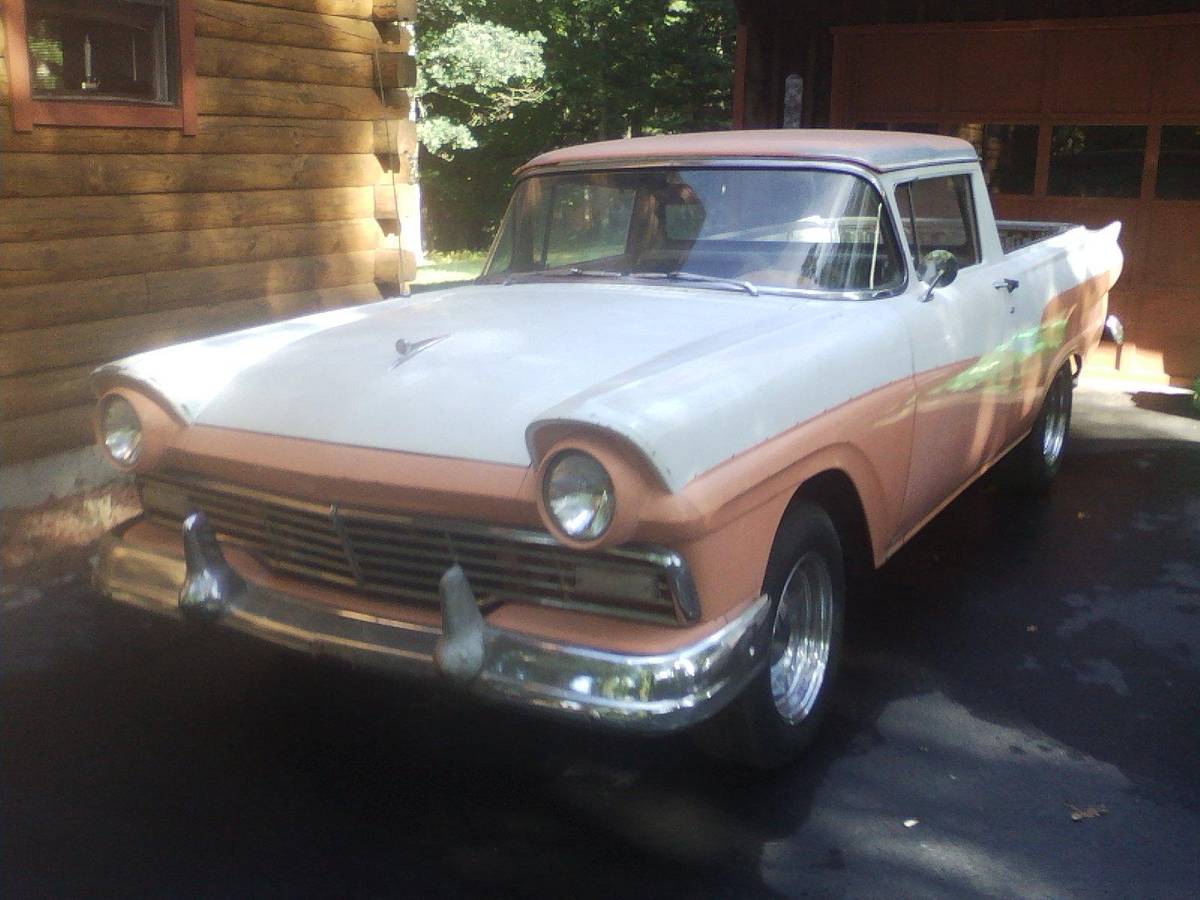 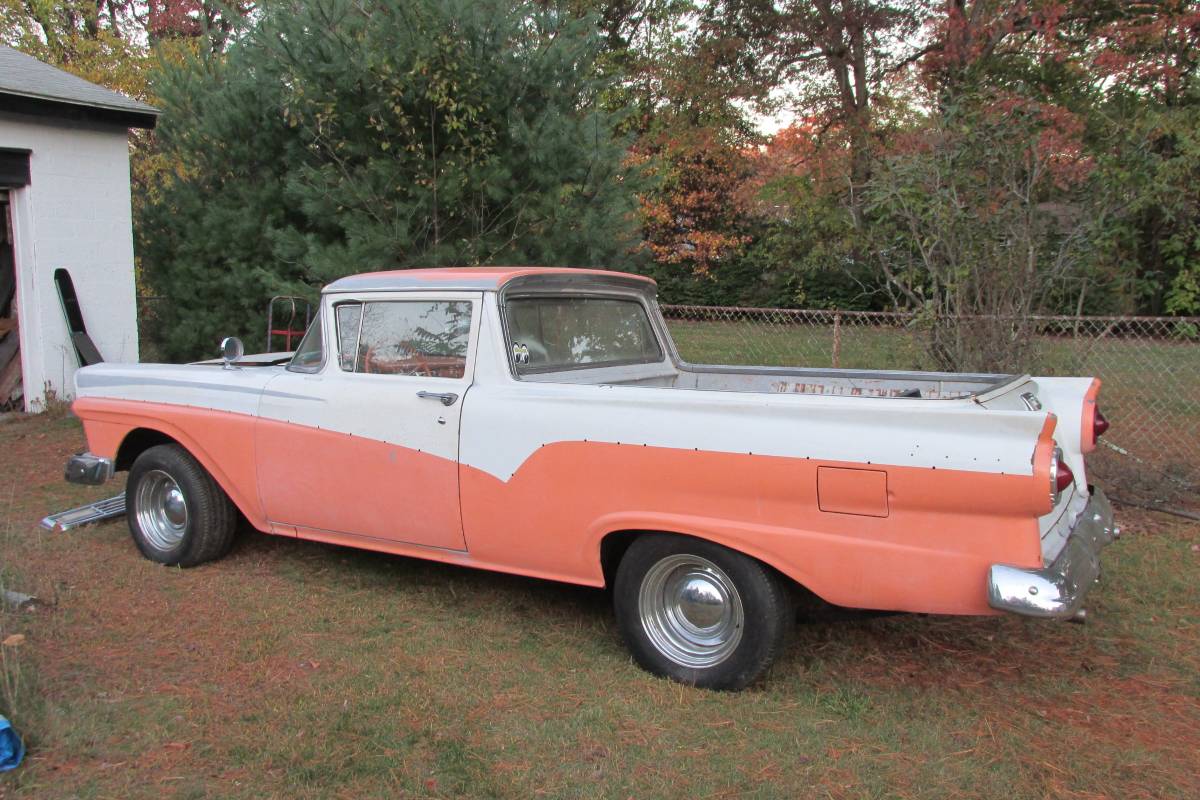 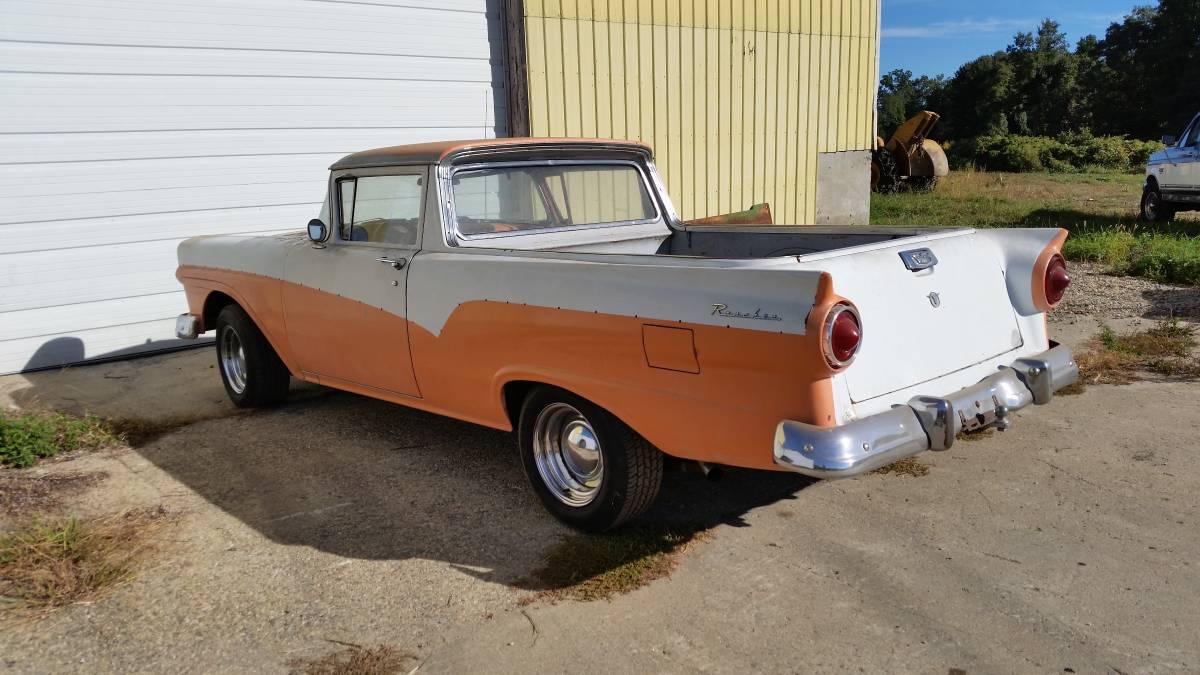 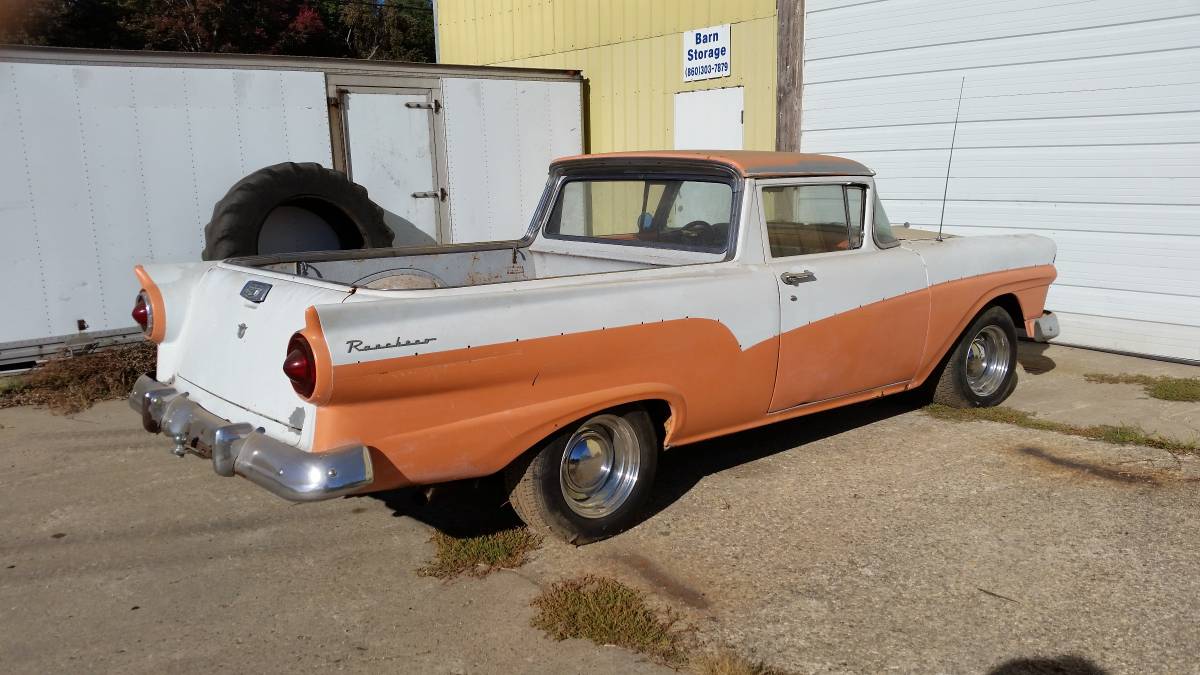 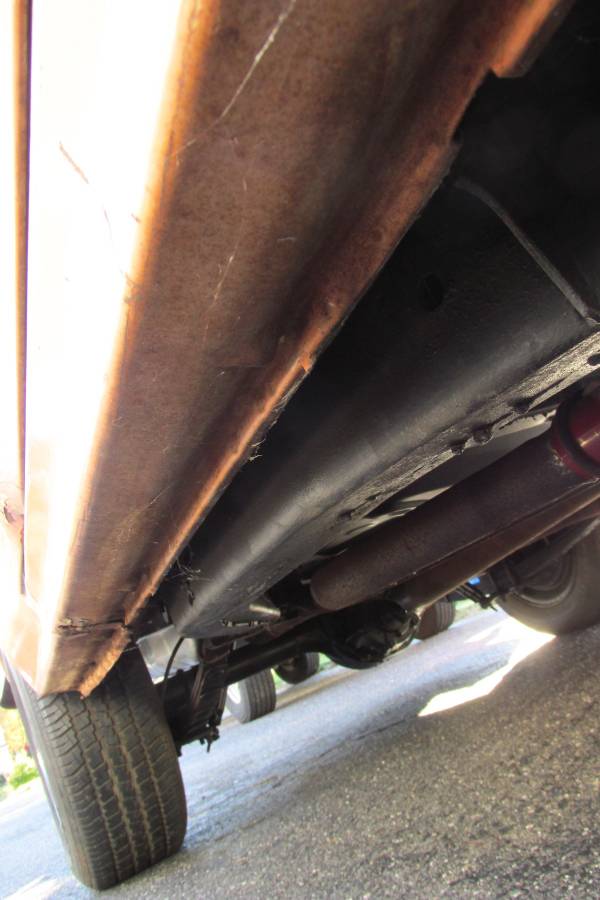 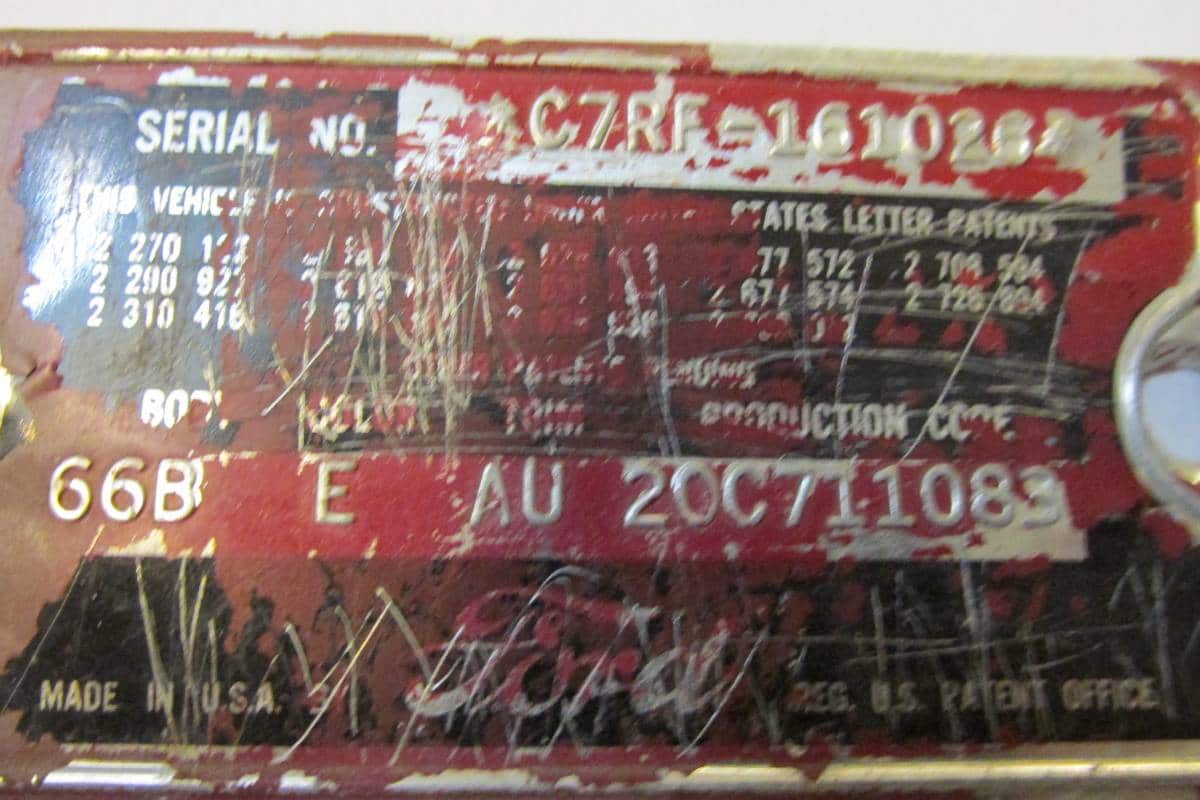 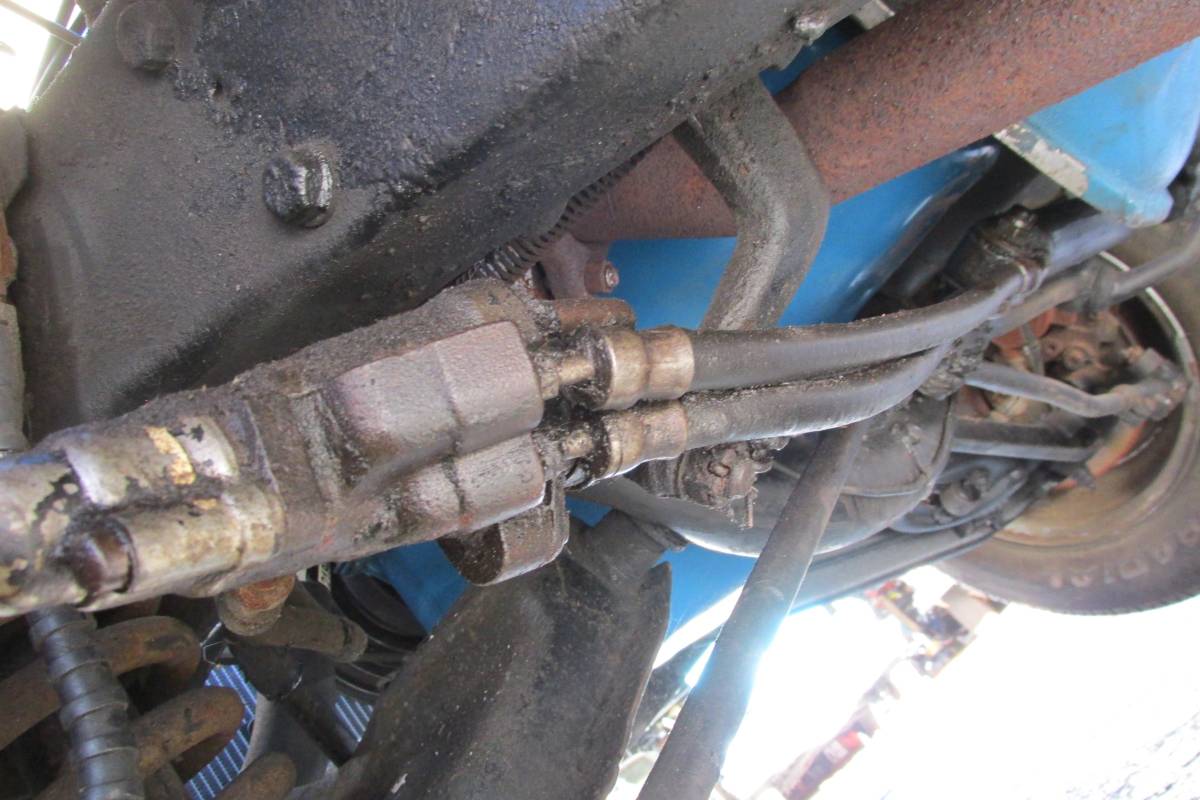 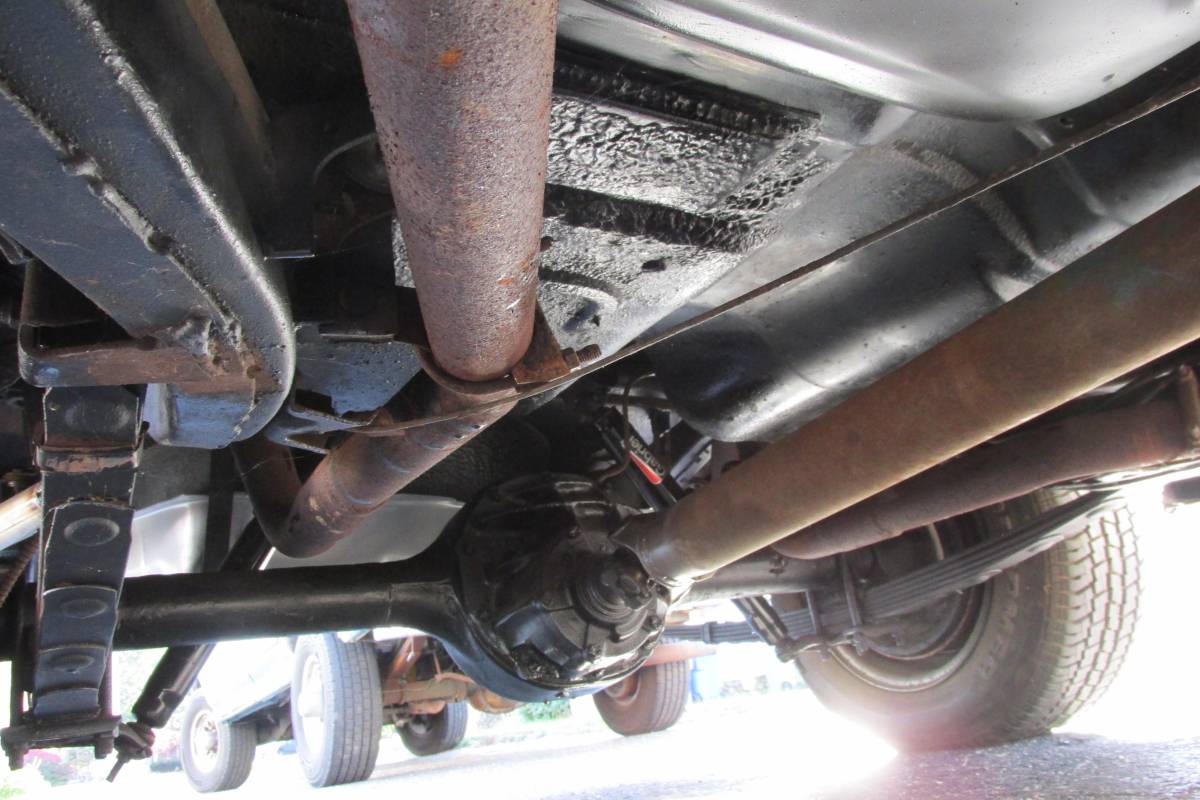 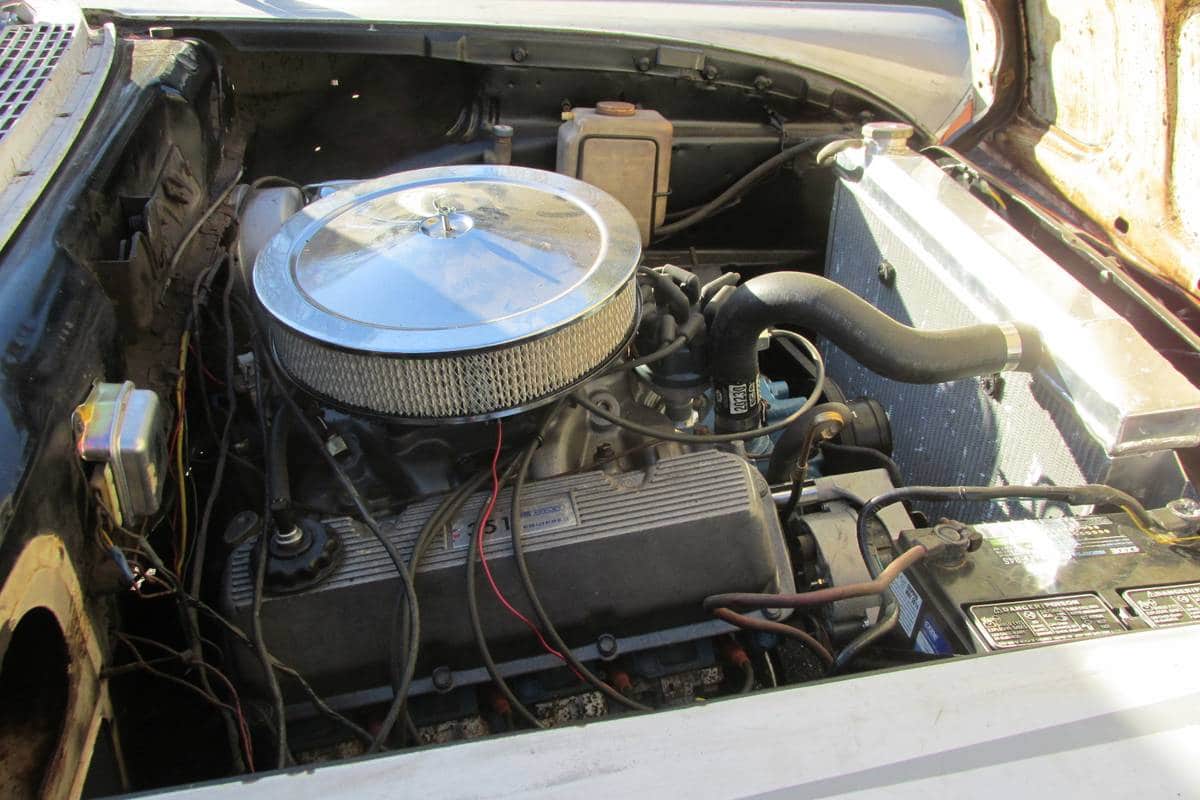 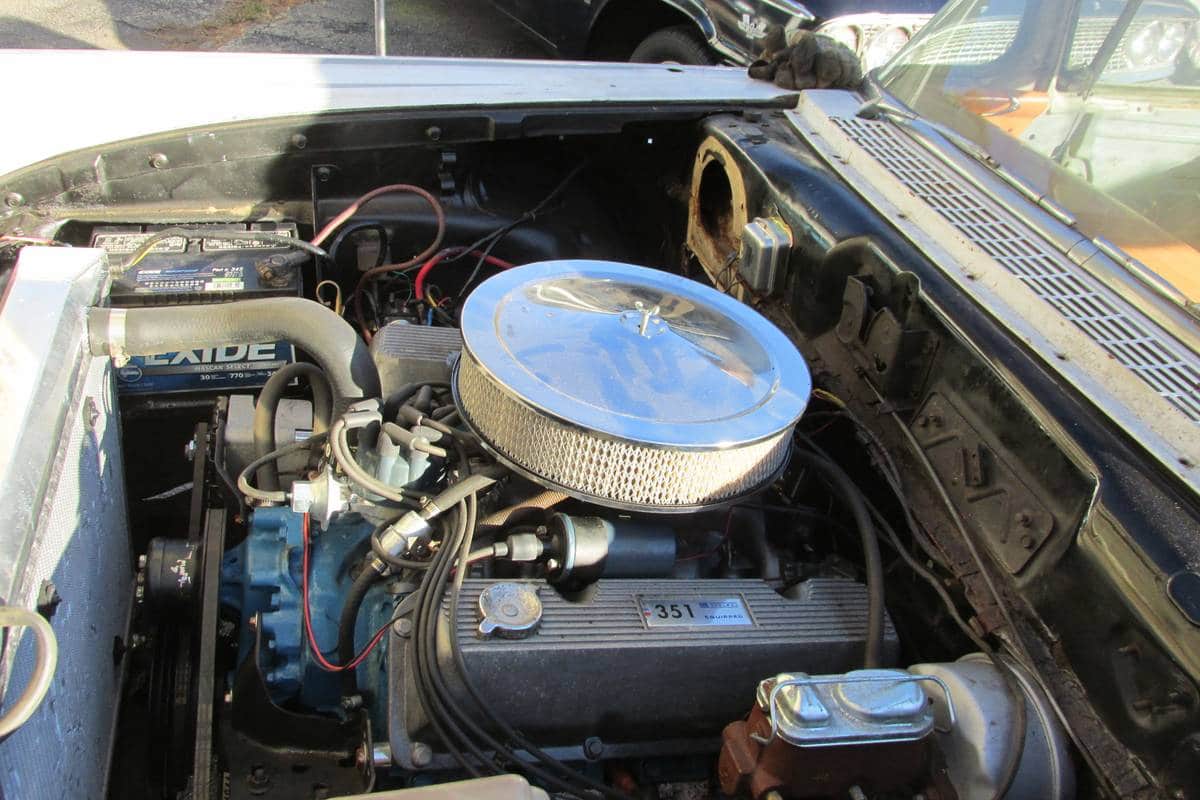 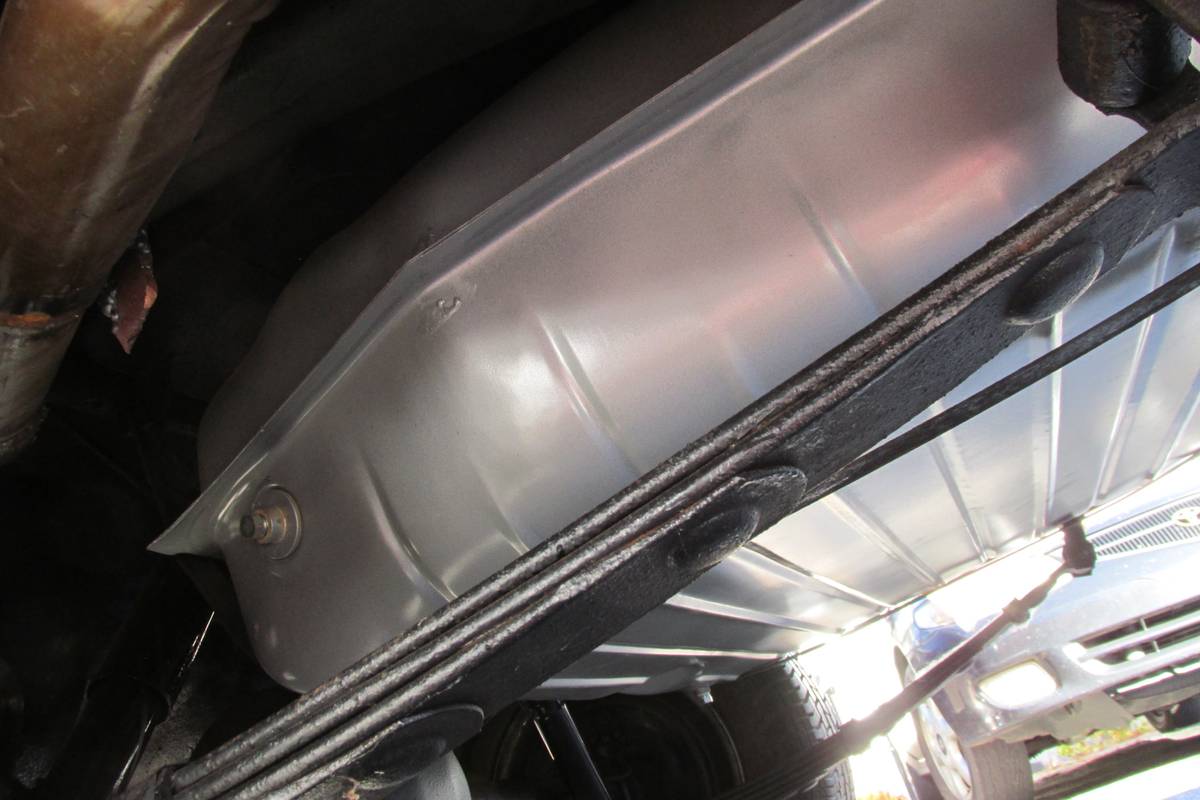 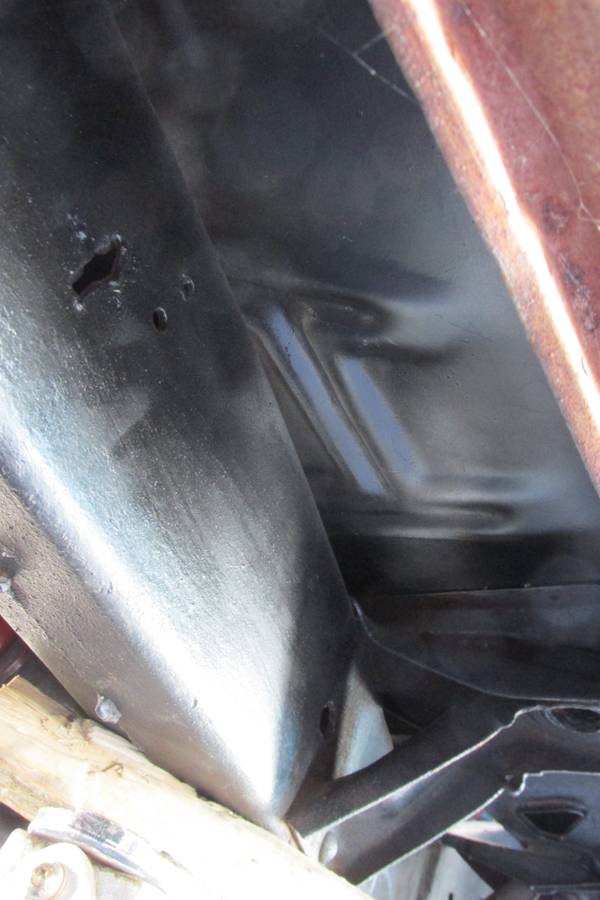 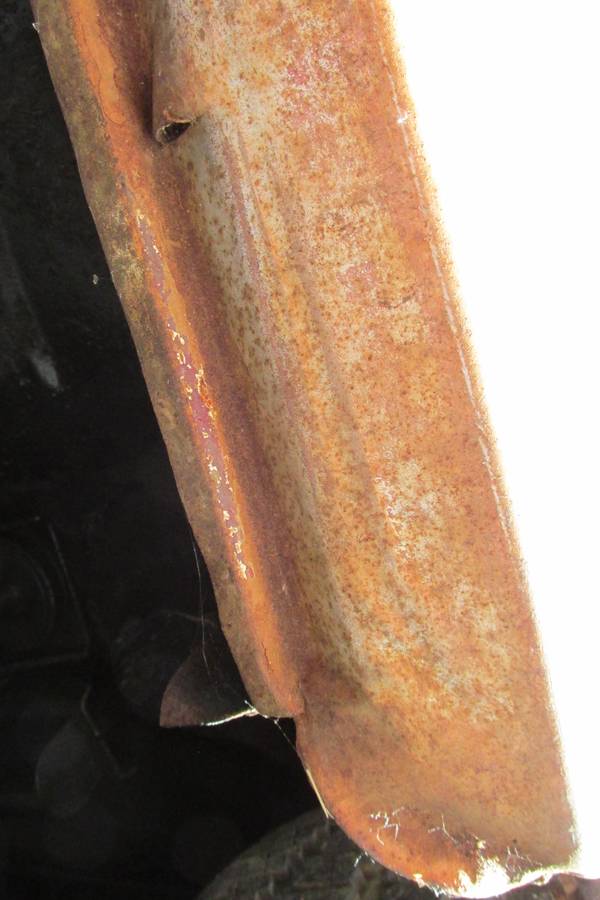 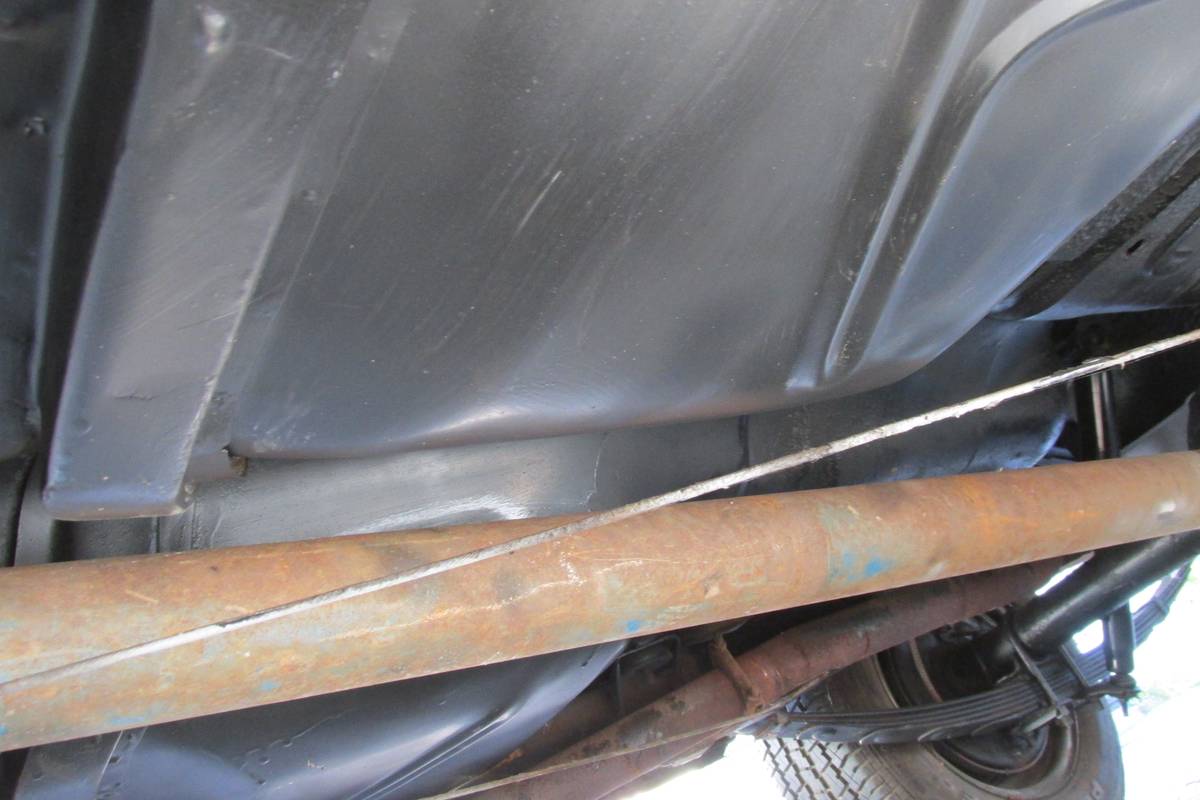 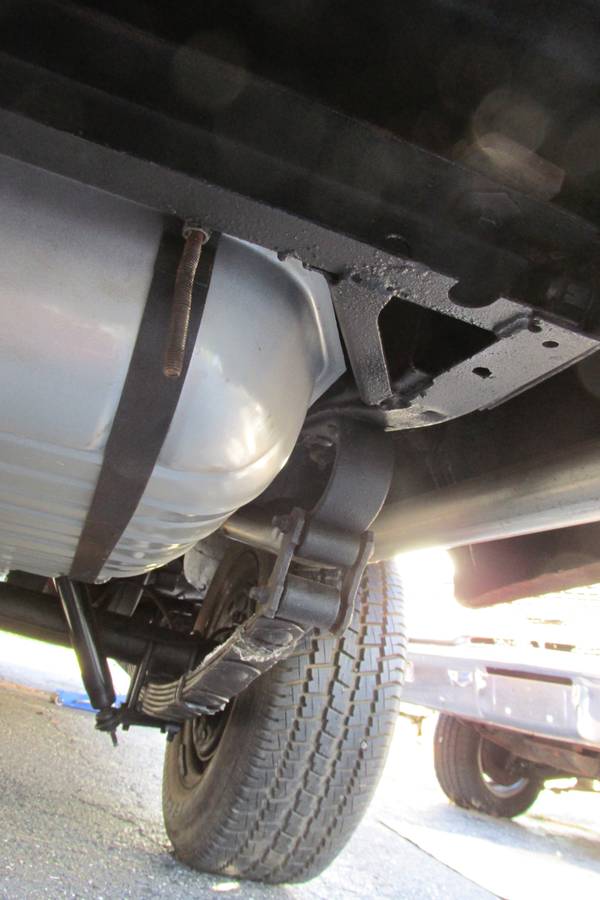 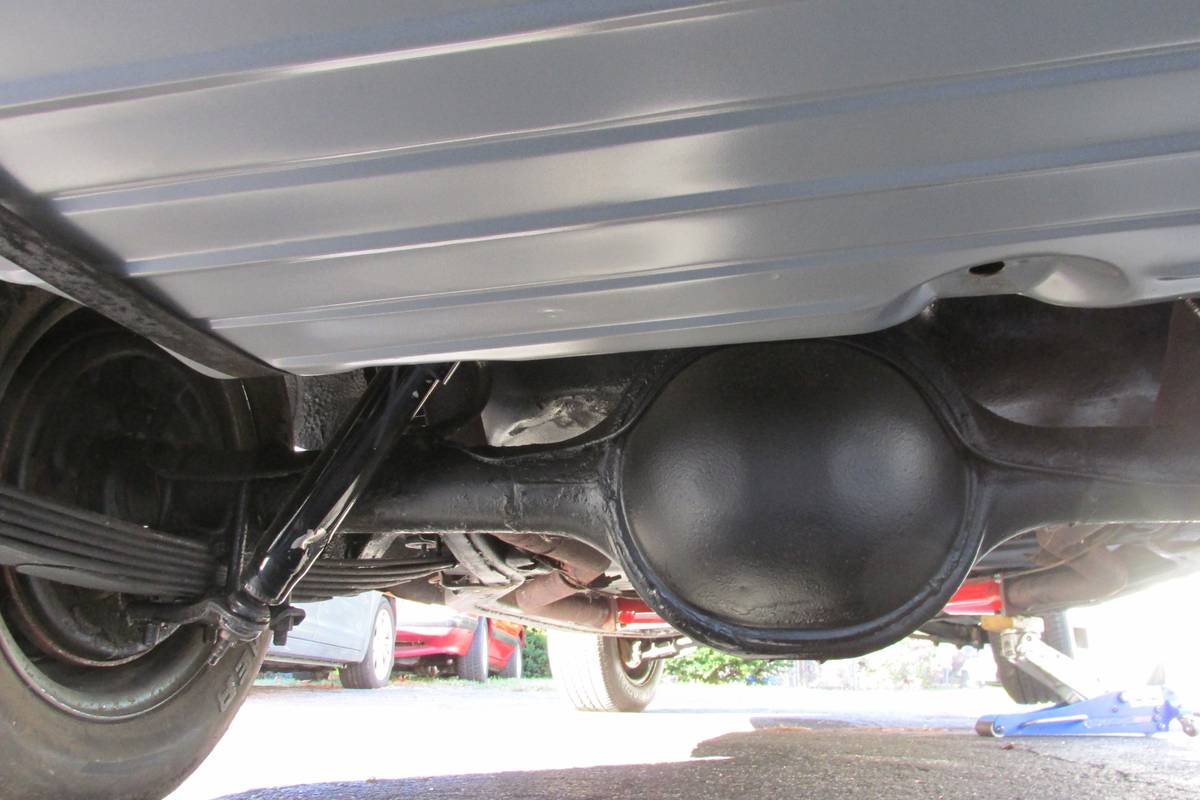 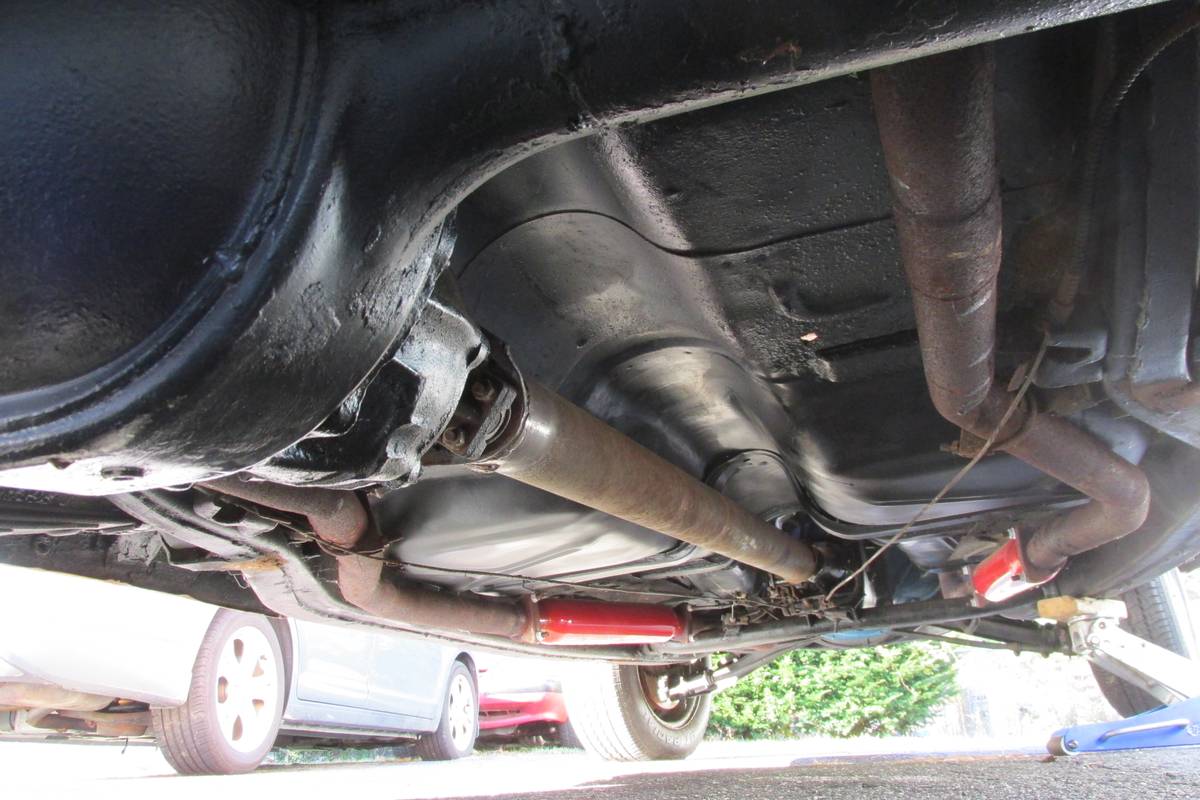 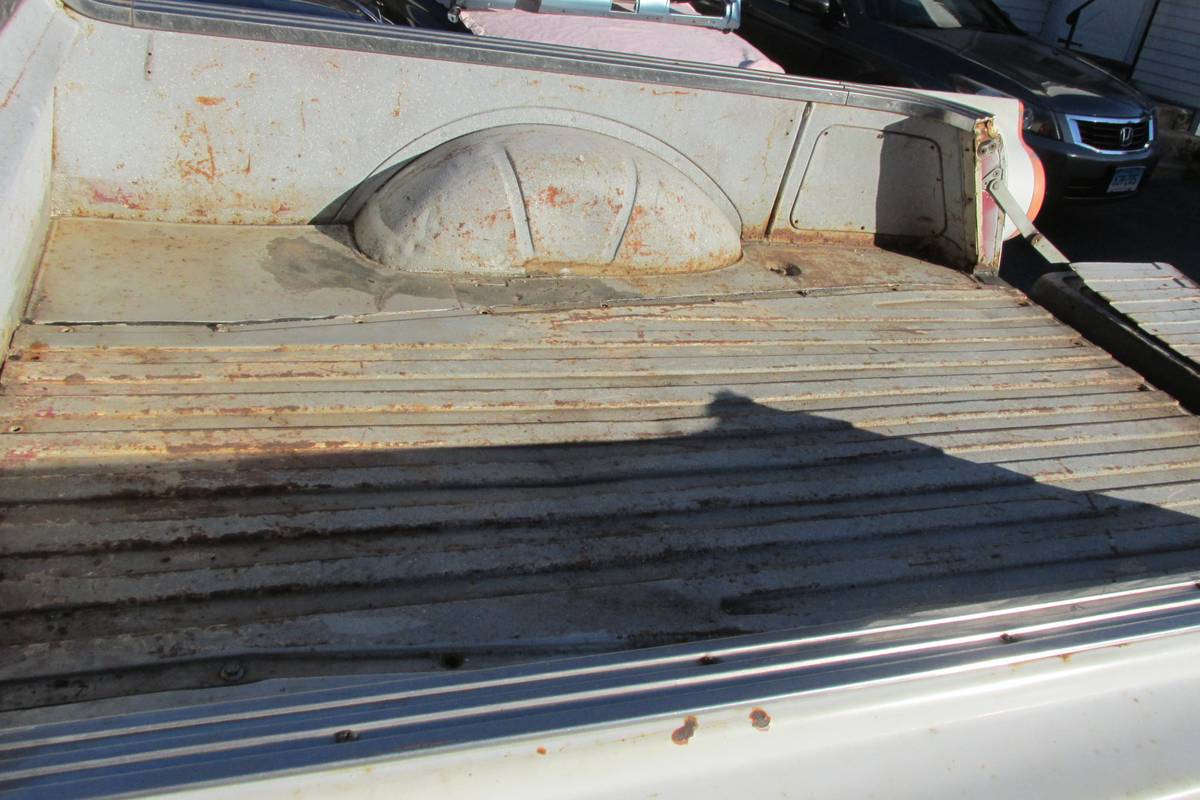 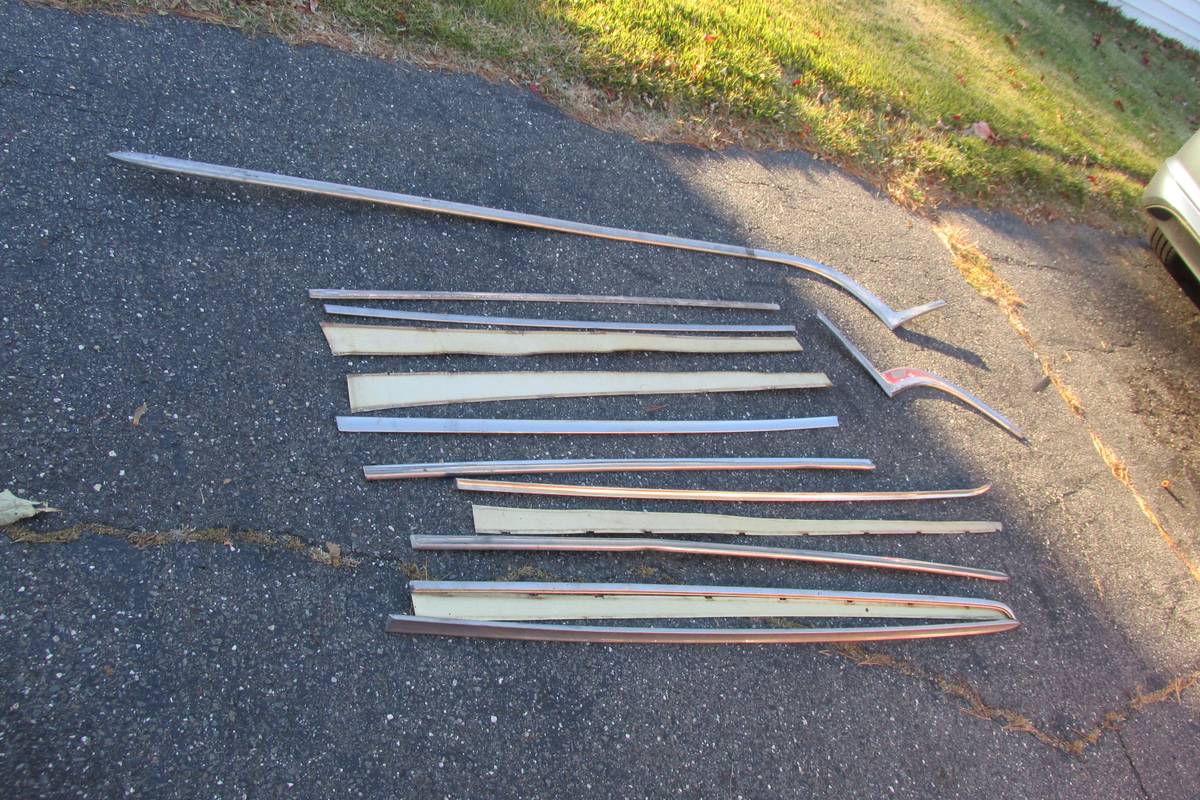 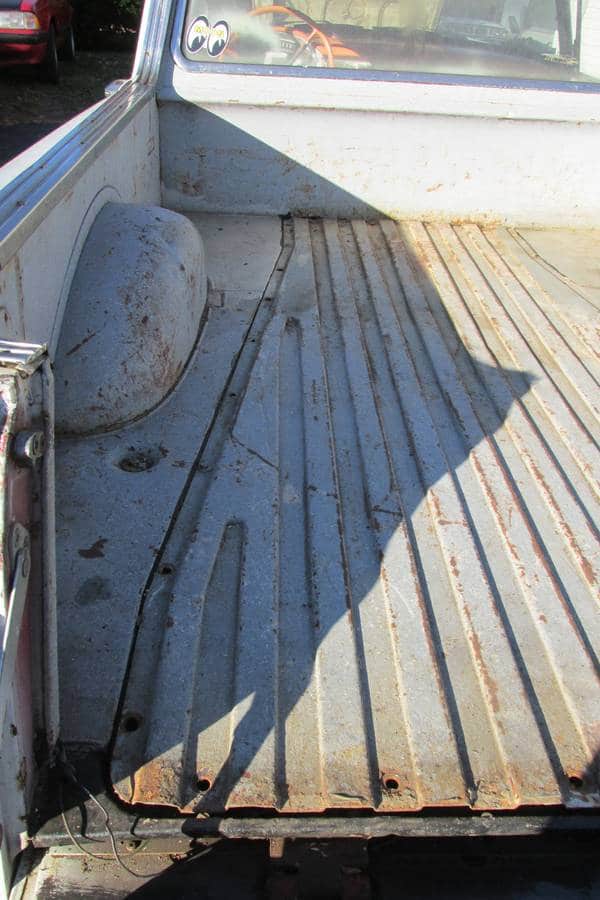 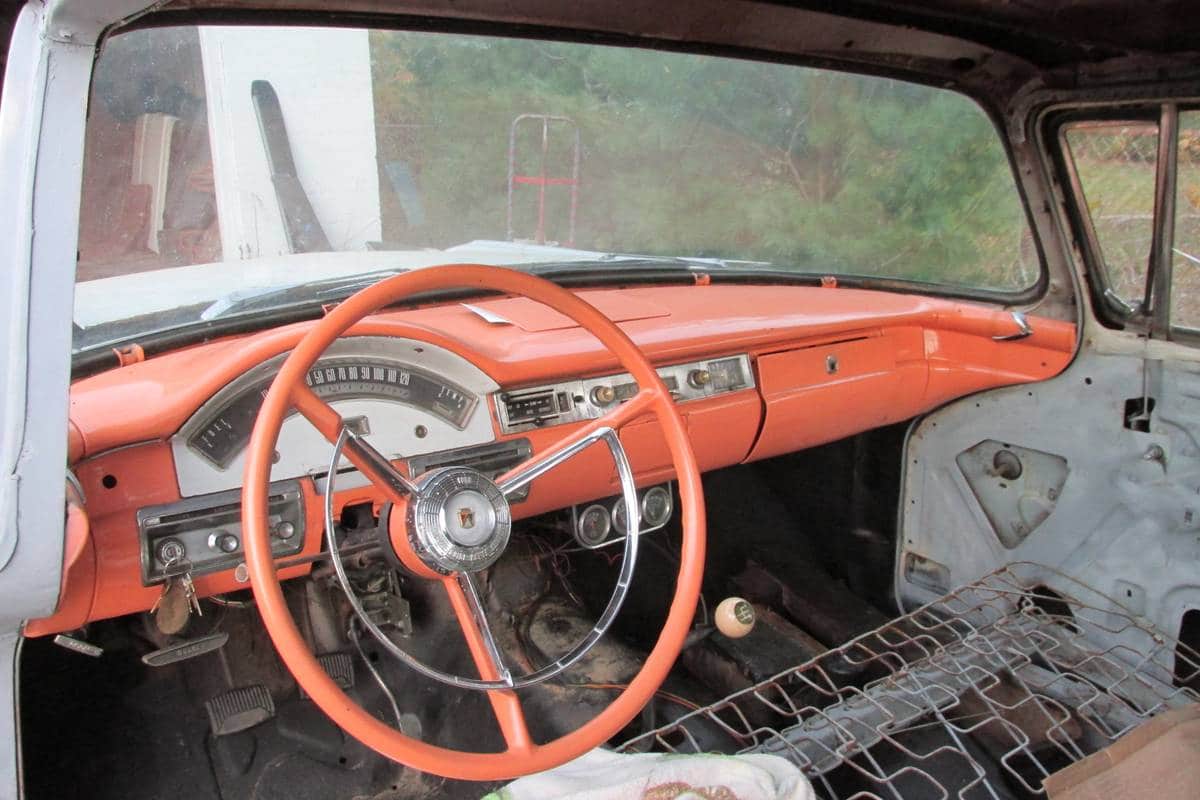 Ford showed it could think outside of the box when it launched its new half passenger car, half truck dubbed the Ranchero for the 1957 model year.  Over time, many of these first-year Rancheros became a favorite of enthusiasts who modified them with more modern components such as the example listed on Craigslist in Bristol, Connecticut where the current caretaker for the last 16 years is asking $12,500 for it. While originally a California example, this modified and running example in need of paint and a complete interior is a stretch to call a #4 “Fair” (Daily Driver), yet a check of the Hagerty Insurance Online Valuation Tool confirms this private seller has his Ranchero optimistically priced between the #4 condition estimate of $7,700 and the #3 “Good” appraisal of $17,500.

Introduced in December 1956, three months after the traditional September model year start-up, Ford based its new Ranchero on the new-for-1957 full-sized platform, specifically the short-wheelbase Custom sedan, two-door Ranch Wagon station wagon, and utilitarian Courier sedan delivery. Essentially a Courier with an open, reinforced bed, its own unique rear window and integrated cab and cargo box, Ford offered the Ranchero initially in two trim levels and throughout the model run, built this Ute on the corresponding automobile assembly line, even though it was sold as a truck through Ford’s truck division. An extremely basic standard model was marketed to traditional pickup truck buyers such as farmers, while the Custom picked up most of the options and accessories available on the Fairlane line, including stainless steel bodyside moldings and two-tone paint.

Proclaiming it as “More Than A Car! More Than A Truck!” Ford’s Ranchero was a hit with both the automotive press and the buying public, filling an untapped market niche for vehicles with the utility of a light pickup and the ease of operation and riding characteristics of a car. In fact, the Ranchero had a marginally higher cargo capacity by about 50 pounds than the basic half-ton F-Series pickup. Both standard and Custom could be ordered with any engine available for Ford cars, all the way up to the 312 cu in (5.1 L) “Thunderbird Special”.

We came across this video containing two Ford Commercials from 1957 proclaiming Ford’s “More Than A Car! More Than A Truck!” theme:

There’s no argument the current caretaker completed much of the work needed on this Ranchero during his sixteen years of ownership, however with all of the work still needed to get this Ute back to just daily driver status, the current asking price is a bit too high for our liking.  If you have excellent negotiation skills and the determination to see this Ranchero back on the raods under your control, then its should make an interesting project to tackle.  Good luck with the purchase!

“You’re looking at my 1957 Ford Ranchero 351C 4V, 4 Speed, Very Solid body, from California, Power disc brakes, PS, many new parts, the motor is rebuilt, 0.30 over, 2 V heads, 4 Barrel aluminum intake, with new Holley carburetor, new stock distributor with per tronix ignitor, new alternator, 4 Barrel aluminum intake, it has a mild cam, new radiator with electric fan, new clutch kit, has a toploader 4 speed, with a hurst shifter. new shocks, all new brakes, with disc brakes in the front. new rear floors, also right front, they are from EMS very heavy duty pans and they are butt welded in. new gas tank, some of the dual exhaust is new. POR 15 was painted on the under-carriage, it does have a couple small holes on the R.H. front outer rocker panel, the inner rockers solid, and a hole on the bottom R.H. front fender, very minor bodywork needed before paint, the car has some chrome, and the grill and the bumperettes are off the car right now was getting ready for paint. the floors and bed is solid, and under the bed is rust free! the tires are old. The heater box is apart now and needs a new heater core! The 1st picture was 3 yrs. ago before I started taking the chrome off!

Needs paint and interior work, no rug, no headliner, just an empty original seat frame with Springs, The car runs good. I have the chrome for both sides of the car with the gold Insert.

I have owned this car for 16 yrs. I really don’t want to sell it but I just have too many cars right now. all new parts are within the last 3 yrs.

I have the original California title open not in my name, my state only has titles for cars up to 20yrs. I have a bill of sales from me, and the C.A. title only!

If you don’t want the motor and 4 speed call me.

HEY SCAMMERS DON’T BOTHER I HAVE HEARD IT ALL BEFORE!!!

PLEASE HAVE THE MONEY BEFORE CALLING AND TALK TO YOUR WIFE ABOUT THE CAR BEFORE BIDDING!