Thriving Business: Bring a Trailer and Its Buyers Prove Immune To COVID-19 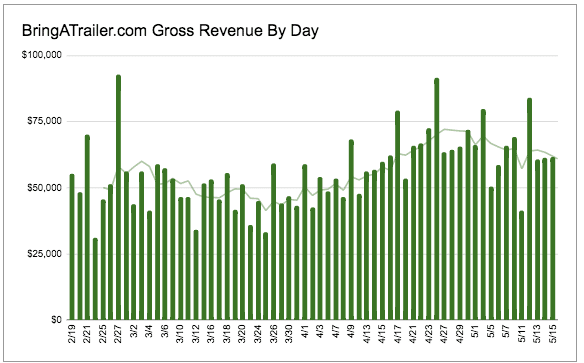 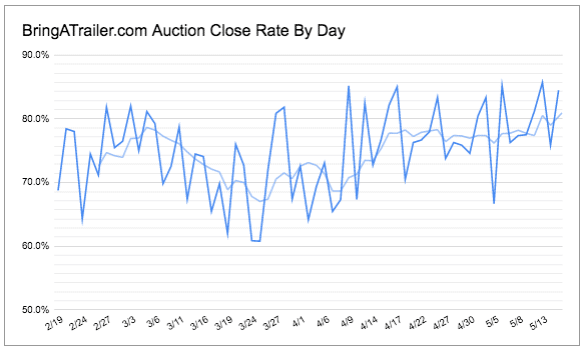 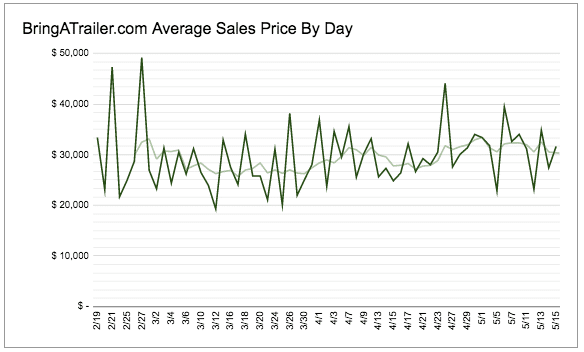 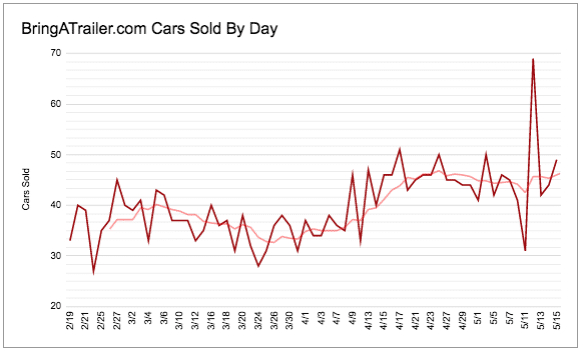 Immune to COVID-19:  The four graphs above summarize daily metrics of online collector car auction site Bringatrailer.com in the ten weeks before and after San Francisco became the first city in the nation to institute a shelter in place order in Mid-March (Source:  BringATrailer.com completed auctions page – compiled data on file).

May 18, 2020 Update:  While we published our initial findings April 9th, we have continued to track the daily progress to confirm whether Bring A Trailer’s initial resistance to the economic hardships to the global COVID-19 pandemic was an ongoing trend.  In the eight weeks since, the data confirm BringATrailer and its loyal base of bidders are an affluent lot unaffected by a 25% U.S. unemployment rate currently.  We’ve updated all of the graphs on this page based on data gathered through Friday, May 15th.

If you prefer, you can also watch the video compliment of this post on the GuysWithRides YouTube Channel:

As COVID-19 showed early signs of spreading quickly across the U.S., most cities and states had yet to take the threat seriously.  One notable exception was San Francisco, which on Midnight, Tuesday March 17th became the first city in the Nation to issue an executive order shuttering all traditional brick-and-mortar non-essential businesses and forced all other workers who could to continue doing so from their homes.

With its headquarters housed in a converted brick warehouse in San Francisco’s Potrero Hill district, classic car auction site BringATrailer.com (“BaT”) suddenly found itself having to rely on its staff to work remotely to keep the website updated with fresh auctions five days a week.  To their team’s credit, the auction site barely skipped a beat.  In fact, until April 6th, when the site announced a one-week charity challenge, subscribers to Bring A Trailer’s daily e-mail would never think anything happened as no reference to COVID-19 had been made.

As governments across the nation forced businesses to shut down, we thought BaT would shift to a reduced daily auction count as writers working from home combined with nervous sellers would suddenly shrink the website’s pool of new lots.  However, as the line graph below illustrates, while the number of auctions declined for a few days following the initial stay-in-place order, BaT’s team quickly rebounded to their ability to now average 58 auctions per day consistently: 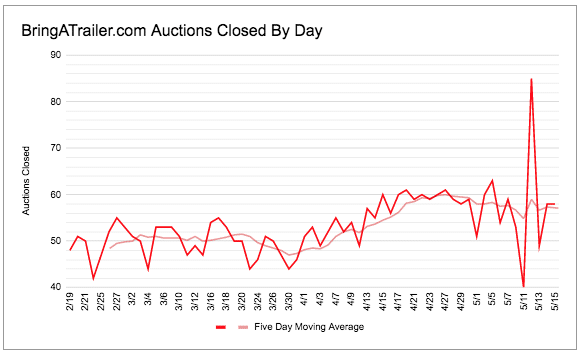 Helping improve the auction sales rate during that time period was a concerted effort to increase the number of No Reserve auctions.  Adding more No Reserves also keeps the pool of buyers high at the risk of potentially lower hammer prices. It could be just a coincidence, but given the current economic times it’s quite possible more sellers were willing to sell their collector cars at no reserve to ensure they get the cash needed: 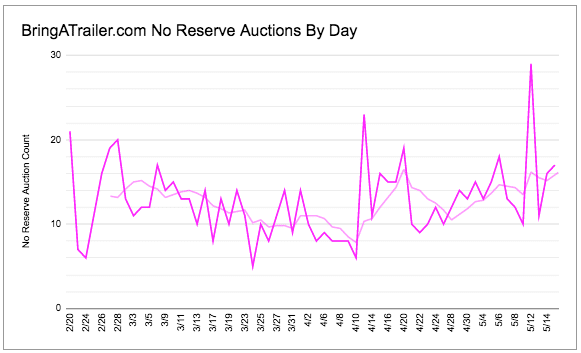 So while Bring A Trailer continues to perform an admiral job of not only continuing their business as usual and providing an entertaining outlet for casual readers to pass the time, what’s more fascinating is how buyers continue to respond.

Since mid-March, stay-at-home orders have been in place for 90% of the U.S. population. Unemployment skyrocketed from nearly four percent to nearly 15% (Source: U.S. Bureau of Labor Statistics, April 2020) during April, with states such as New York and New Jersey reporting even higher rates.  While the NASDAQ, Dow Jones Industrial Average, and the S&P 500 indexes lost all of the gains realized during the Trump Administration with declines rivaling those of the 2008 financial crisis initially, much of those losses have been rebounded as investors saw the State’s and Federal Government’s ability to deal with the crisis as well as Congress’ passing for two economic stimulus packages to date.  One would think under such unprecedented circumstances sales of a nice-to-have item such as a collector car would decline.  Yet, looking at key Bring A Trailer metrics completely bucks that trend.

A primary indicator of an auction outlet’s success is their sell-through rate, i.e., how many lots offered actually sold.  While BaT’s sell-through rate initially declined from its strong February numbers, since early April the site continues to track at least five percentage points higher than the long-term 70% rate company leaders themselves quoted in this recent New York Times Article. The following graph summarizes the trend by day:

Our focus in this post is not whether prices of classic cars have been negatively impacted. However, the five percent buyer’s premium Bring A Trailer charges successful bidders can serve as a proxy as reduced gross revenues could indicate sellers are lowering their reserve prices.  As the graph below indicates, that hasn’t been the case to date.  In fact it’s on the rise:

Until the first week of April, Bring A Trailer was oddly silent as the website continued in a “business as usual” model without any company acknowledgement of the COVID-19 Pandemic.  On Monday April 6th, the company started donating $150 of each successful auction during the week to a worthy charity in New York City (here’s the post on their site) only after learning a seller decided to give a portion of the proceeds from his vehicle sale to Frontline Foods.  Using the five percent buyer’s premium to estimate BaT’s gross revenue shows the company essentially will tithe this week’s daily gross proceeds:

While we commend BaT for stepping up and donating, to quote their post, “We feel fortunate that BaT Auctions are fully online and continue to thrive even as our staff are working from home and sheltering in place.” With Bring A Trailer being one of the few automotive-based businesses actually continuing to thrive, we challenge them to continue their donation rate beyond just this week as a sign of showing we are all truly in this together.

So, what does this all mean?  Two things.  First, while traditional concert-style, in-person auction houses scramble to figure out how to conduct some business virtually, Bring A Trailer further solidified the concept of online collector car auctions.  For example, both Mecum and Barrett-Jackson were left with no choice but to cancel traditional in-person April and May events.  RM Sotheby’s scrambled at the end of March to salvage their Palm Beach event to hold what they could online to, at best, mixed success and we will report how their all-online auction later this month turned out.  Barrett-Jackson, the auction house which prides itself on offering a successful No Reserve, in-person format, just held a Reserve-Only virtual event this past weekend with only a 50% sell-through rate (we will report our observations of this event by the end of the week).

Second, not only has Bring A Trailer’s fan base continued to be a loyal following in unprecedented times, a large make-up of their community has proven themselves to be an affluent base of real buyers (i.e., not “dreamers” or “tire kickers”) with deep pockets able to weather the current economic storm brought on by COVID-19.  A notable example finished last week when BaT auctioned a 2020 C8 Corvette with only eight miles for $91,500.  Add the five percent buyer’s premium to that winning bid and we observed Corvette’s new owner was willing an affluent enough to pay a $13,000 premium over M.S.R.P. to get a 2020 Corvette now rather than wait another year.

This serves as further proof of how up-market BaT has become in just the past two years.  It wasn’t that long ago optimistic buyers actually needed to bring a trailer after taking over someone else’s stalled project found on BaT.  These days the site could change their name to “Bring an Enclosed Car Hauler” and not many collector car enthusiasts would “BaT” an eye.