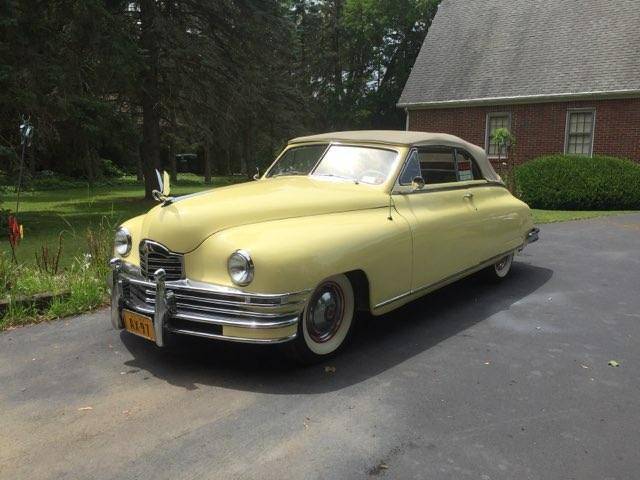 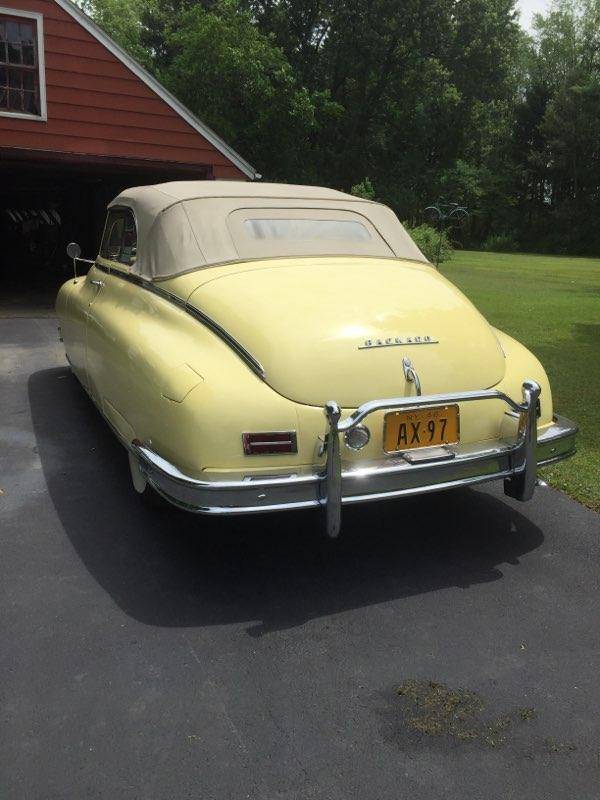 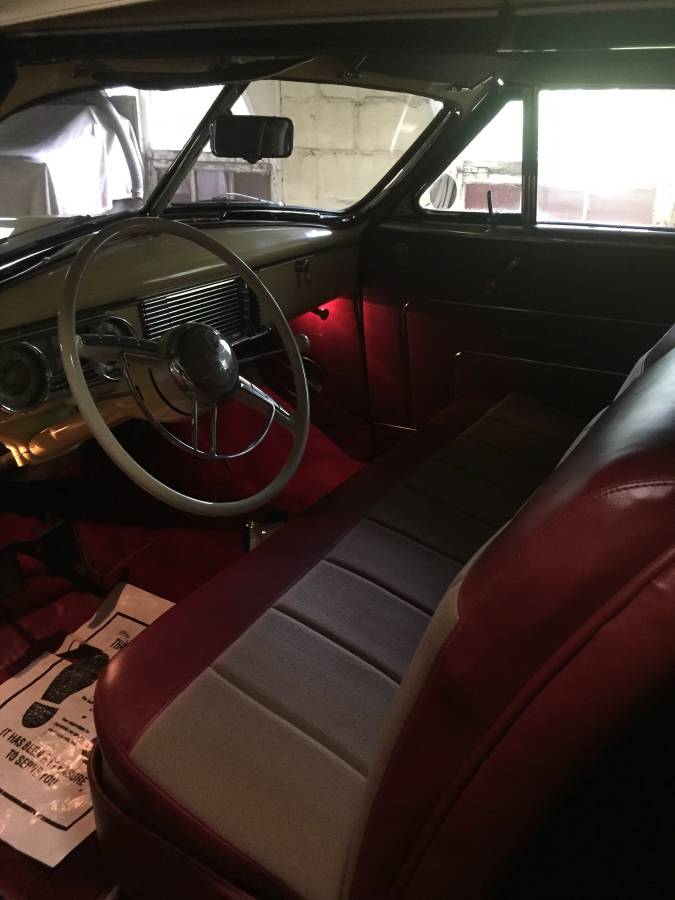 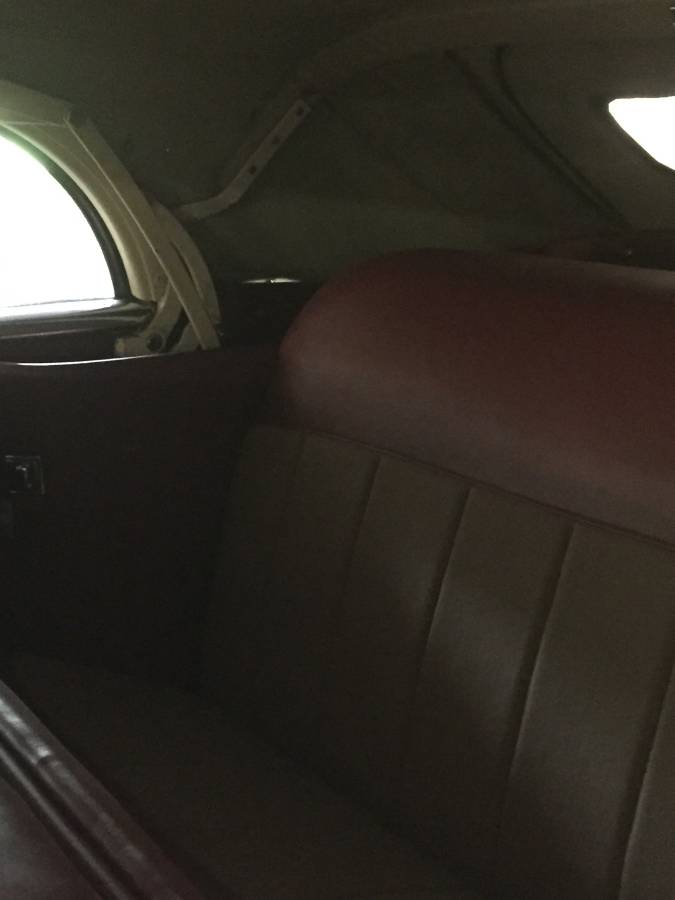 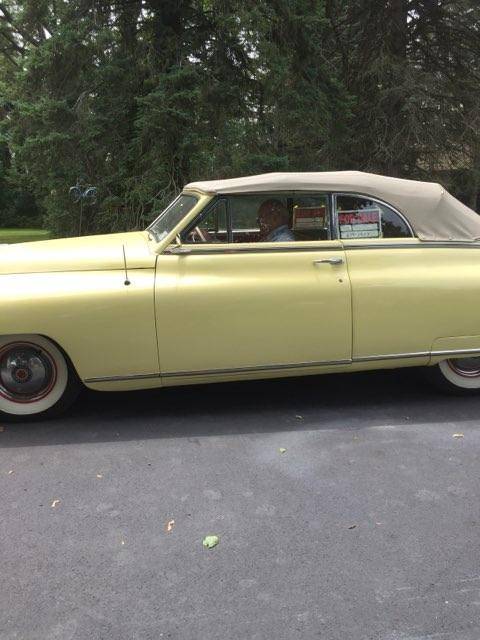 Update: This one got away, but if you have your heart set on something similar, email us the details of what you’re looking for or call Rudy directly at (908)295-7330
May 28, 2020 Update:  we thought this classic Packard Victoria convertible sold last November when the seller removed the post shortly after lowering the asking price from $45,000 to $42,500.  As is typical for collector cars in Buffalo, if a seller can’t sell their classic by November they wait until the spring to try again.  Unfortunately in this case the value of these Packards continues to decline as the people truly interested in them age out of the hobby.  If you are serious, we think starting at $35,000 and being willing to pay no more than $40,000 will nab you what appears to be a classic Packard.  Good luck with the purchase!

November 14, 2019 Update – earlier this week, we noticed the price on this rare Packard dropped to $42,500 however the post has been removed, so we’re calling this one “SOLD!”

A Cormorant is a sea bird with a long neck much like a swan.  While Centuries ago the Cormorant became a symbol of nobility and indulgence, in more recent times it became one of Packard’s hood ornament designs, such as the one on this 1948 Packard Super Eight Victoria we found posted for sale in Hamburg, New York where the current caretaker is currently asking $45,000 or best offer for it.  Using the Hagerty Insurance Online Valuation Tool as a guide, the current caretaker has his Victoria priced slighter more than halfway between the #2 “Excellent” level of $47,700 and the #3 “Good” estimate of $31,000.  We note that the prices of these Packards have remained rock steady over the past three years according to the guide.

By the end of World War II, Packard was in excellent financial condition with assets of around $33 million, but several management mistakes became ever more visible as time went on. Like other US automobile companies, Packard resumed civilian car production in late 1945, labeling them as 1946 models by modestly updating their 1942 models.  Although Packard was in solid financial shape as the war ended, they had not sold enough cars to pay the cost of tooling for the 1941 Clipper design. Consequently, Packard cleverly updated the design by adding sheet metal to the existing body and now offered a convertible Victoria model featured here.  The revised sheet metal was a “bathtub” style design. While this was considered futuristic during the war and survived for decades in both the Porsche 356 and Saab 92, the 1948–1950 Packard styling was polarizing. To some it was sleek and blended classic with modern; others nicknamed it the “pregnant elephant”. While Packard successfully sold cars immediately after WWII, it’s important to note the demand for new cars was extremely high, and nearly any vehicle would sell. Once Cadillac introduced its all-new line-up for 1948 and then its overhead valve V8 in 1949, Packard started a decline they would never recover from.

The Craigslist post reads as briefly as a classic newspaper ad:

Consequently, you’ll need to get the details of this stately car by contacting the seller directly over the phone (716) 649-1407.  We’re sure there’s a great story to go with this classic car, so if you learn more about it, please be sure to share it here.  If you decide to add this Packard to your collection,  Good luck with the purchase!