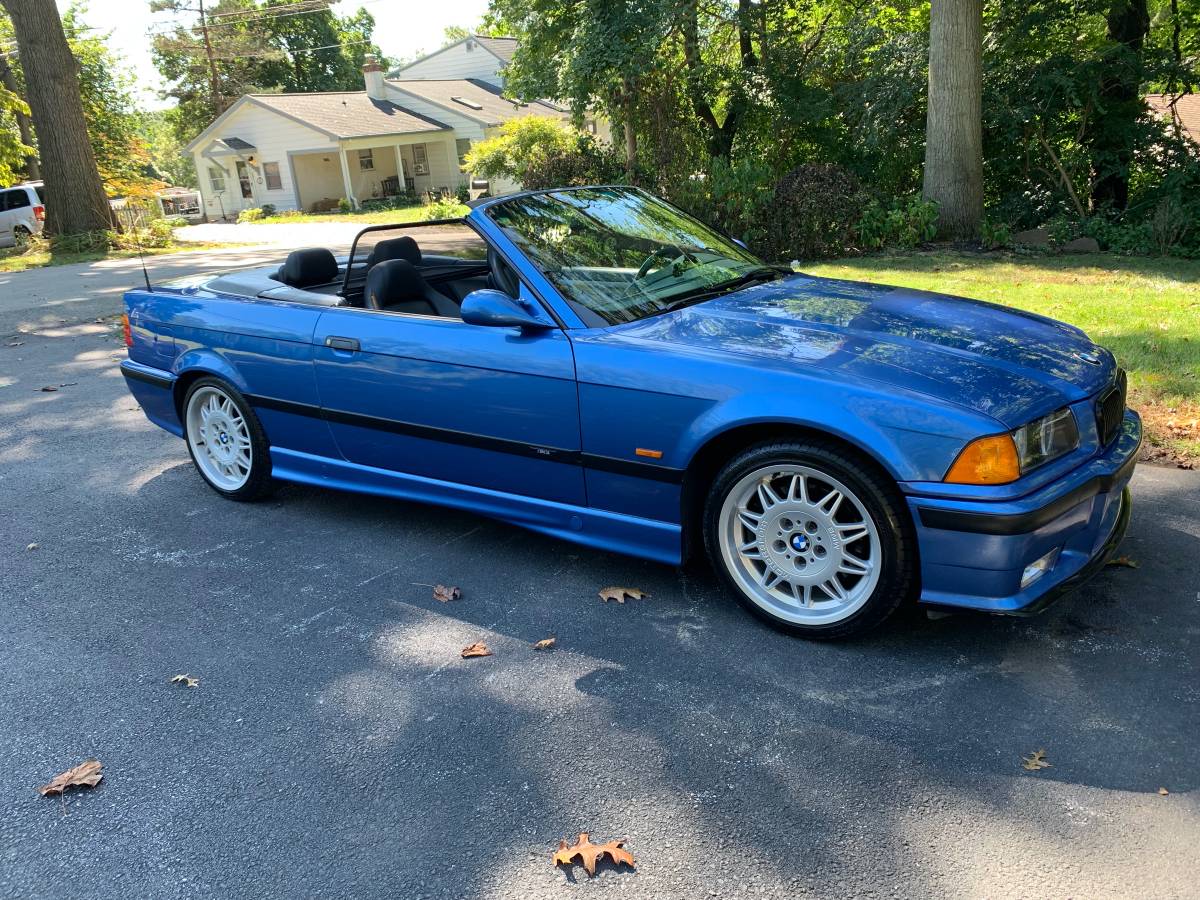 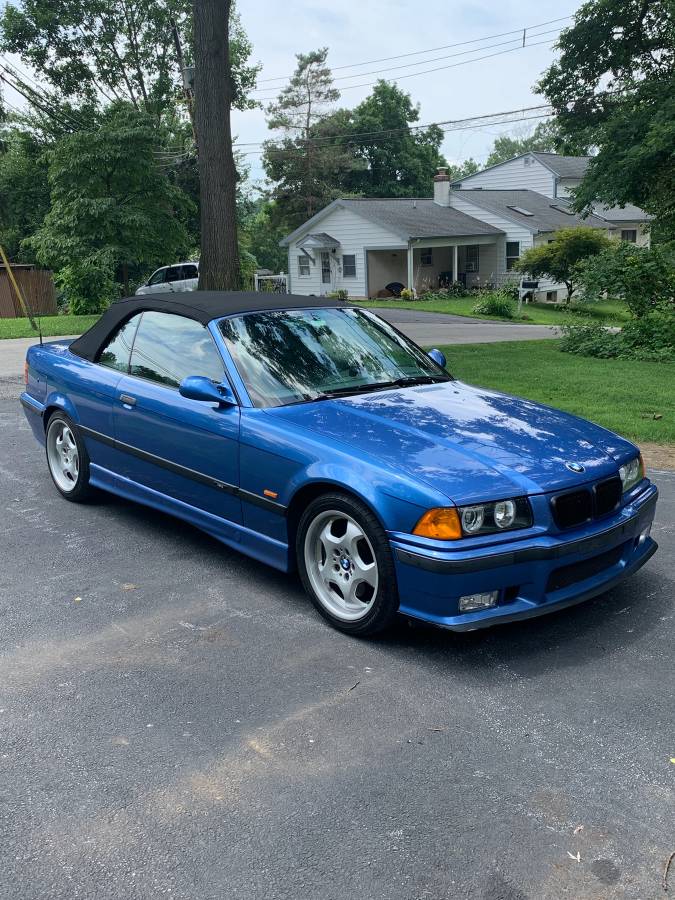 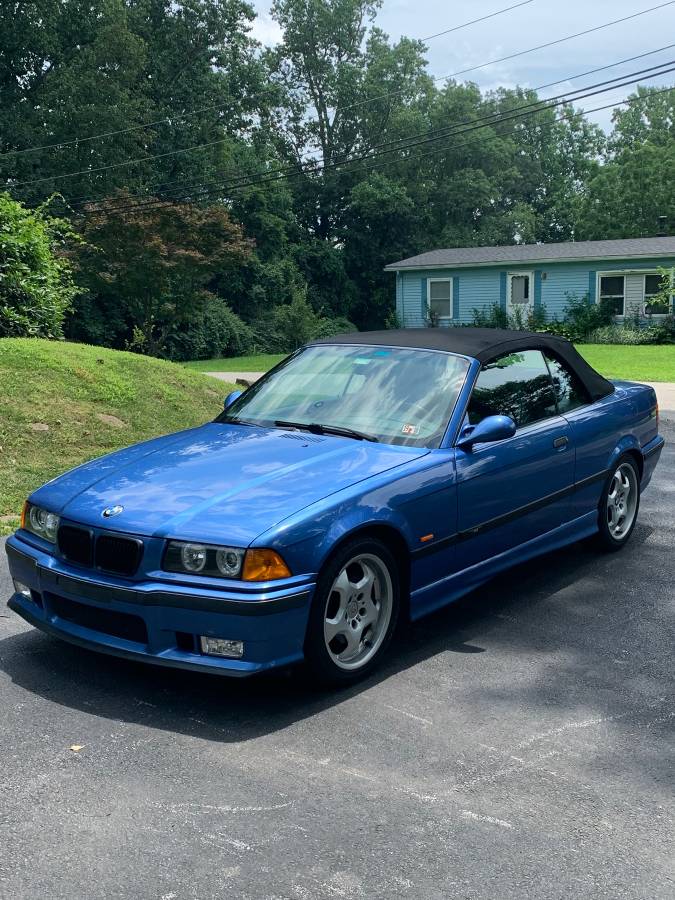 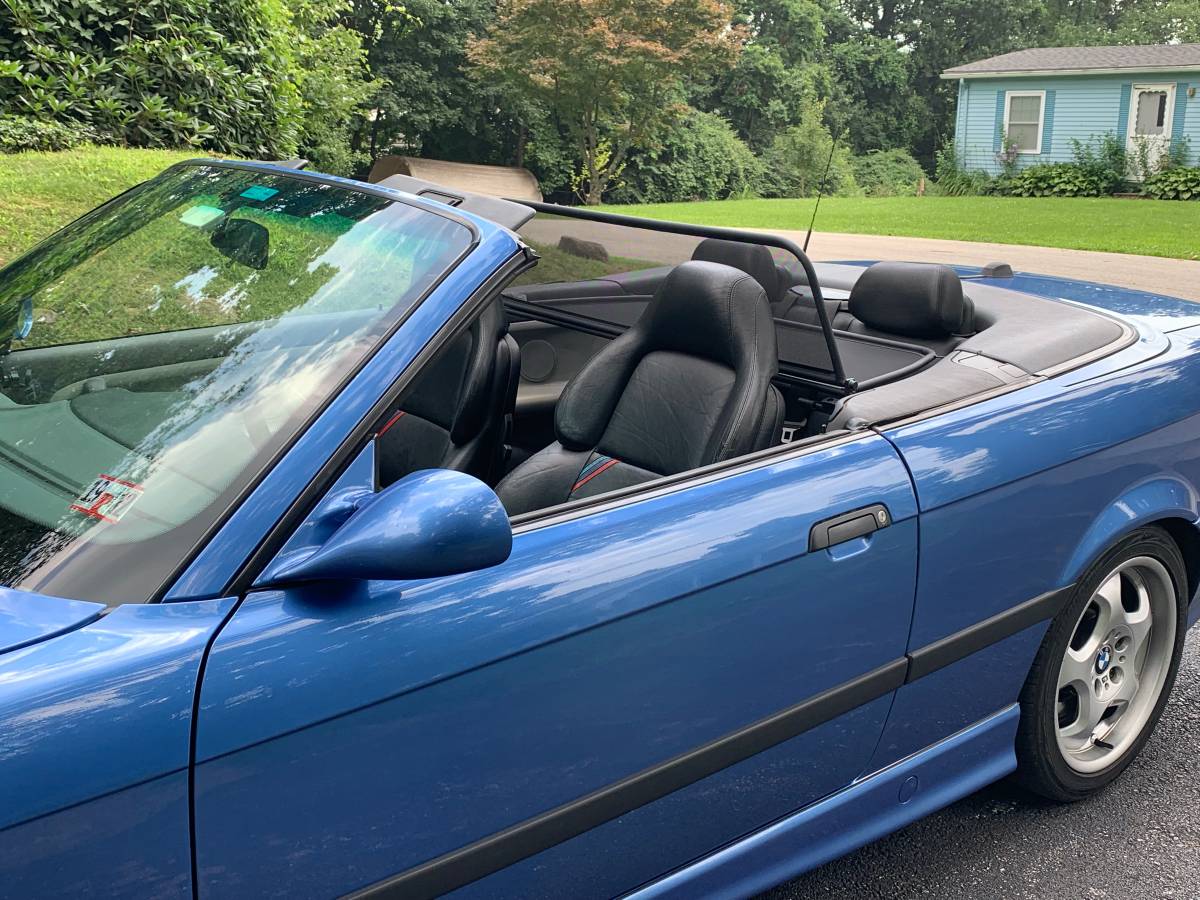 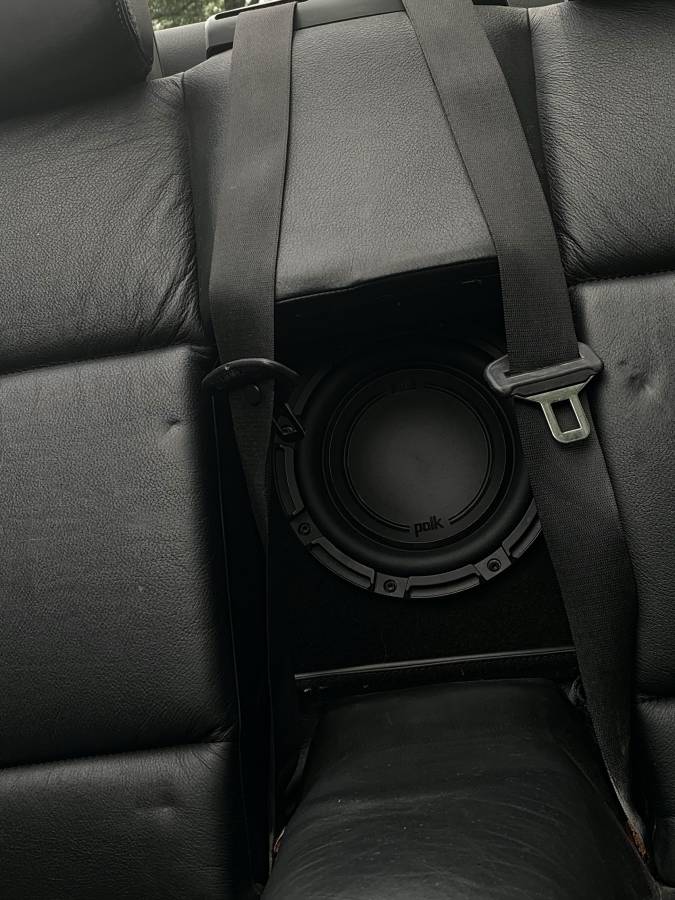 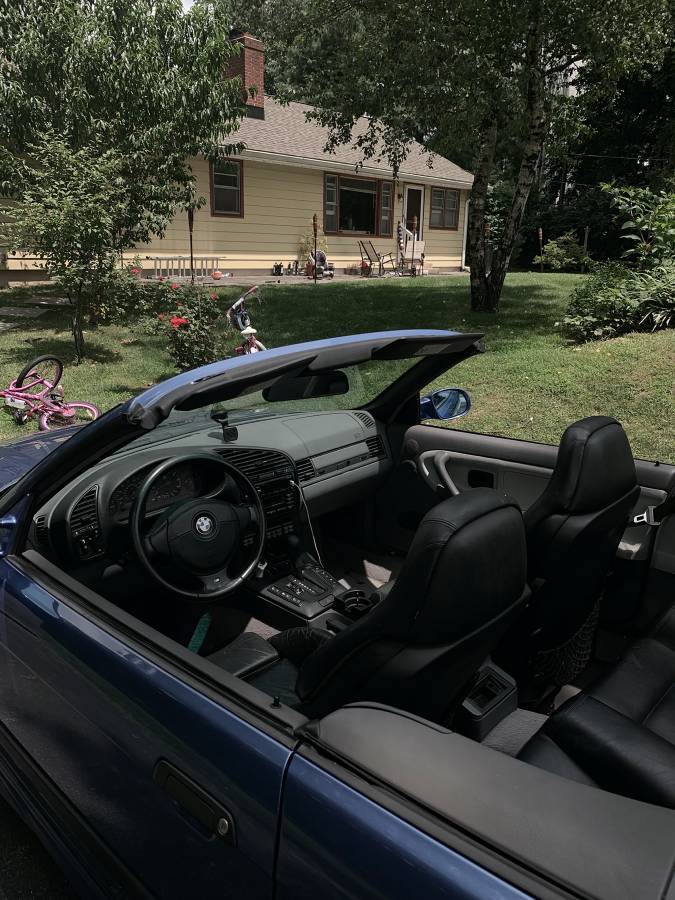 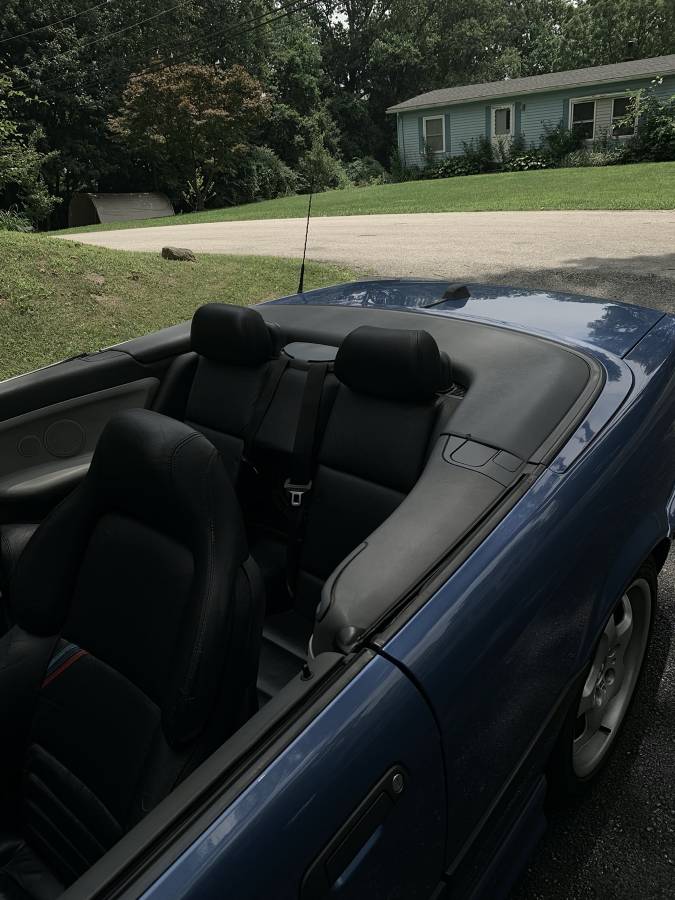 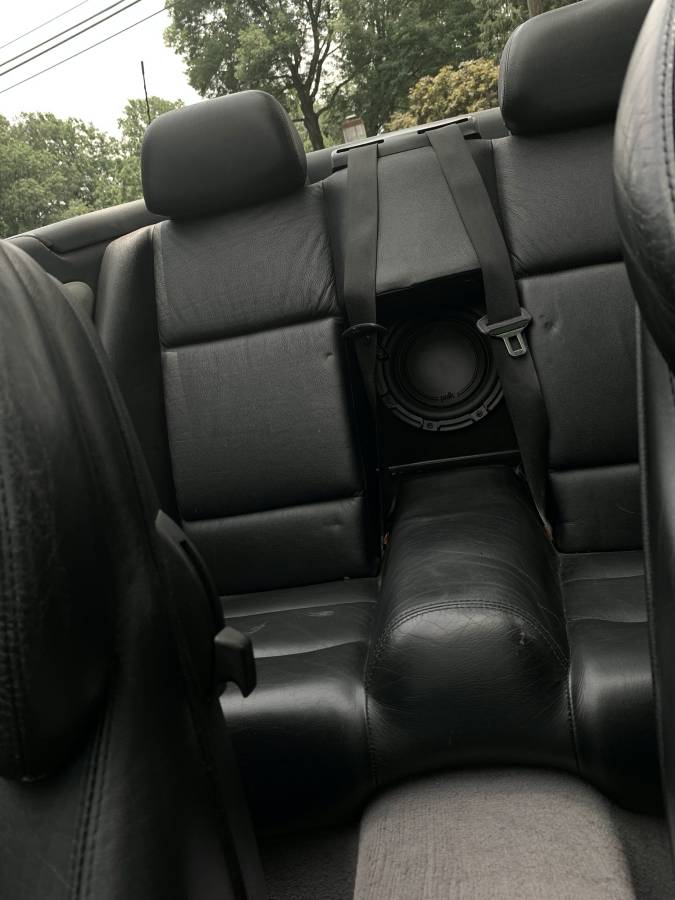 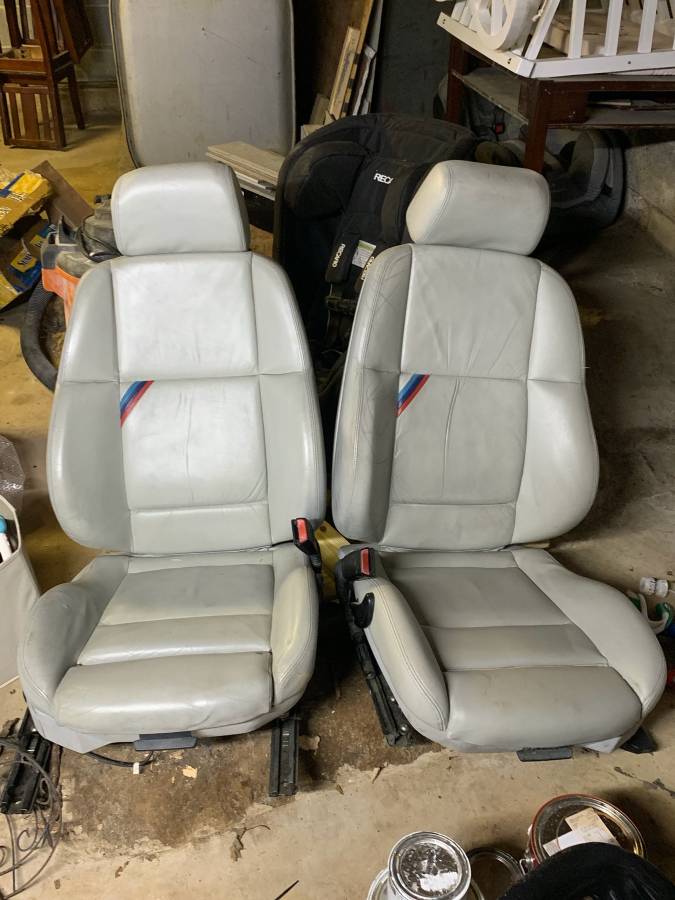 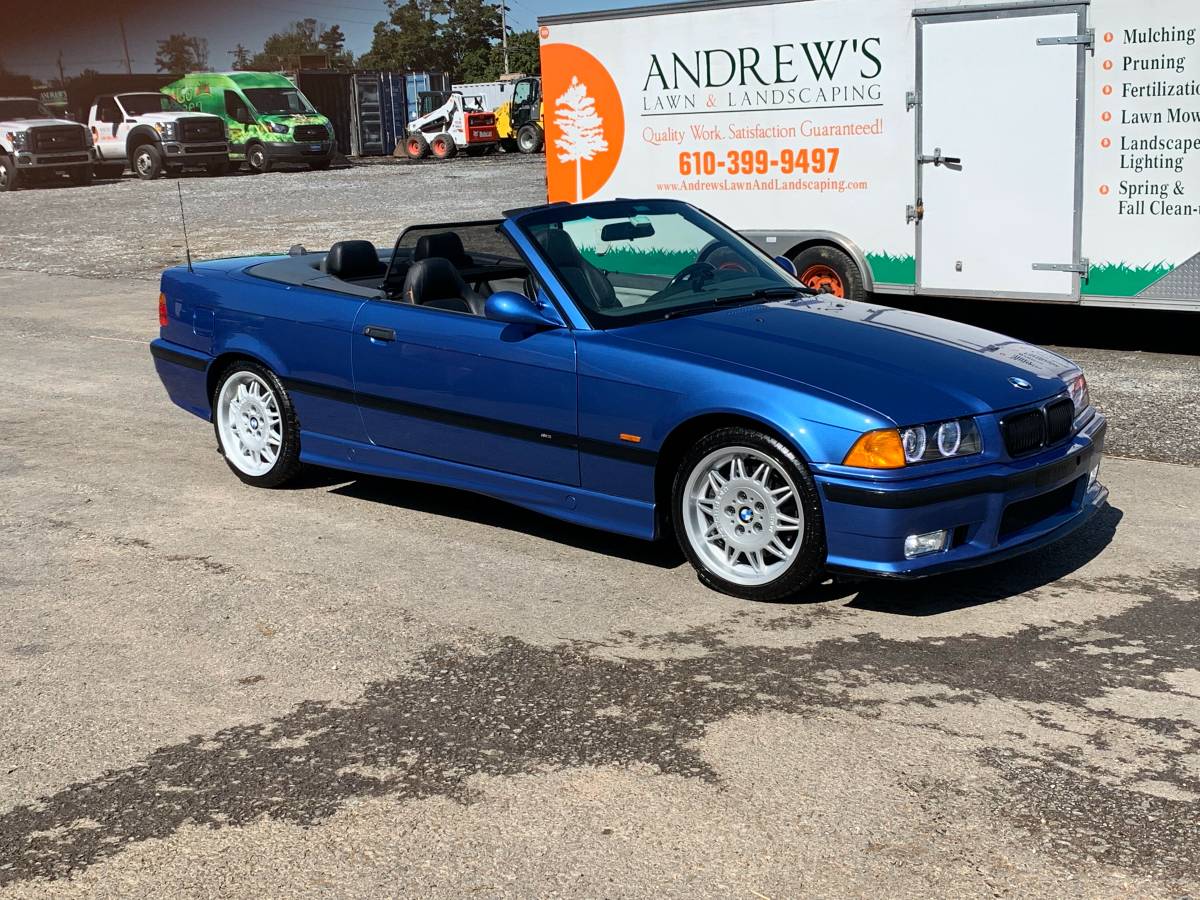 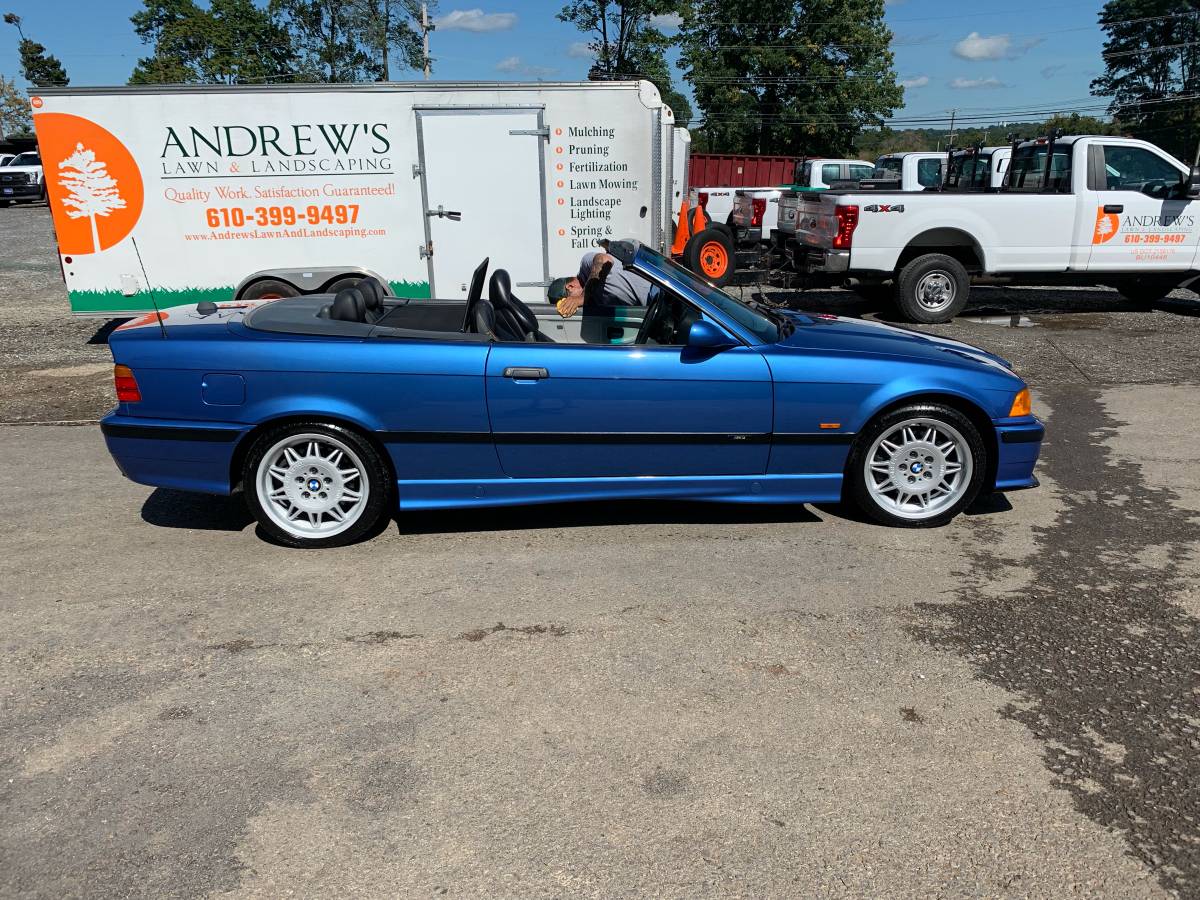 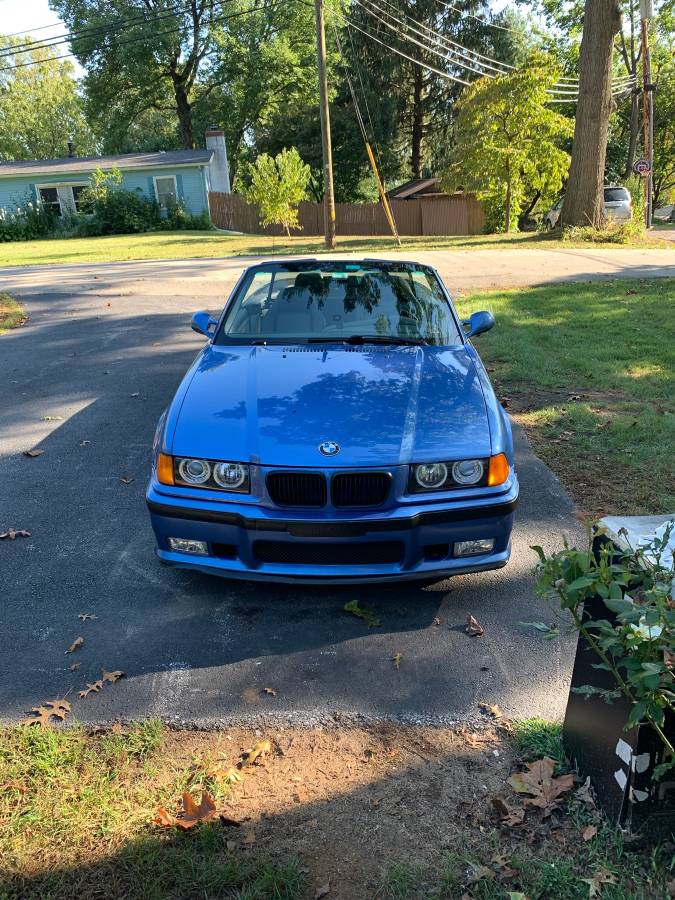 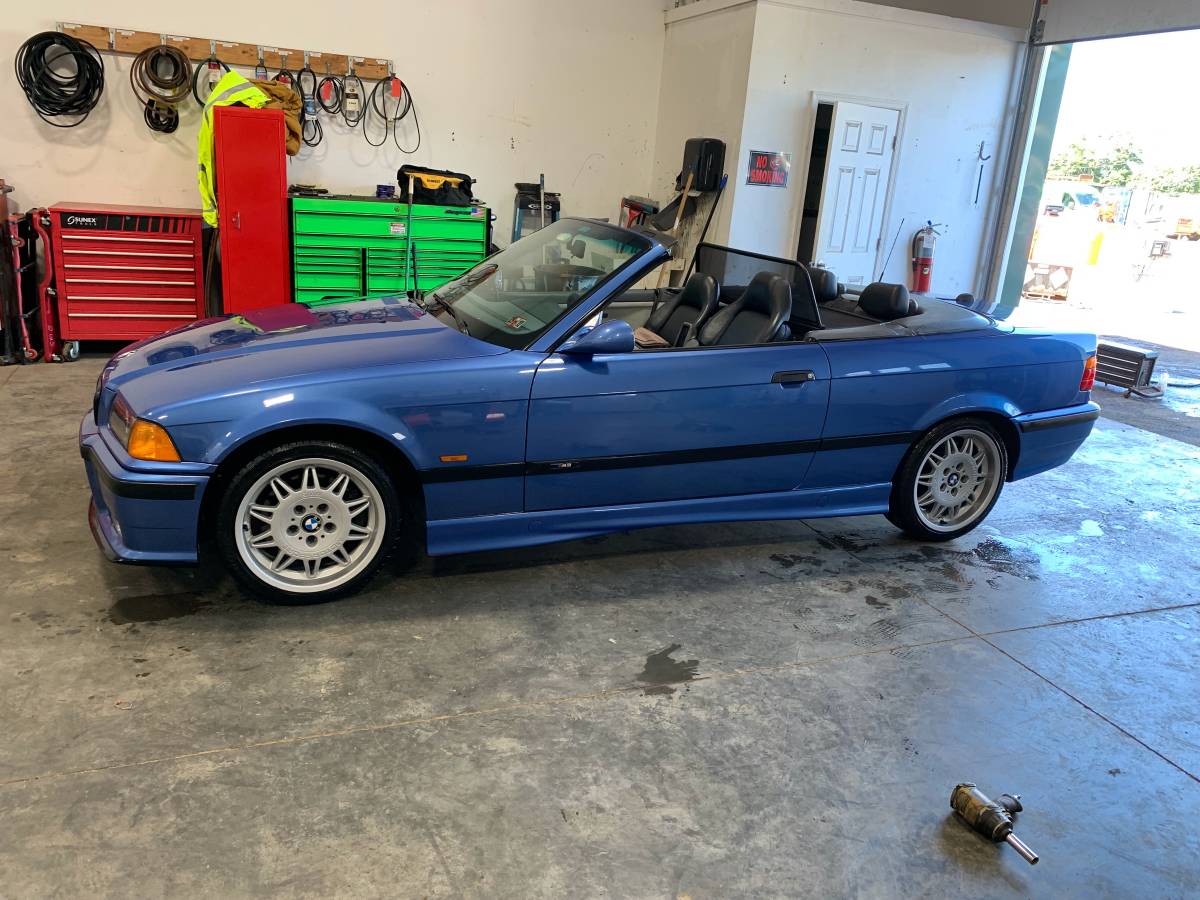 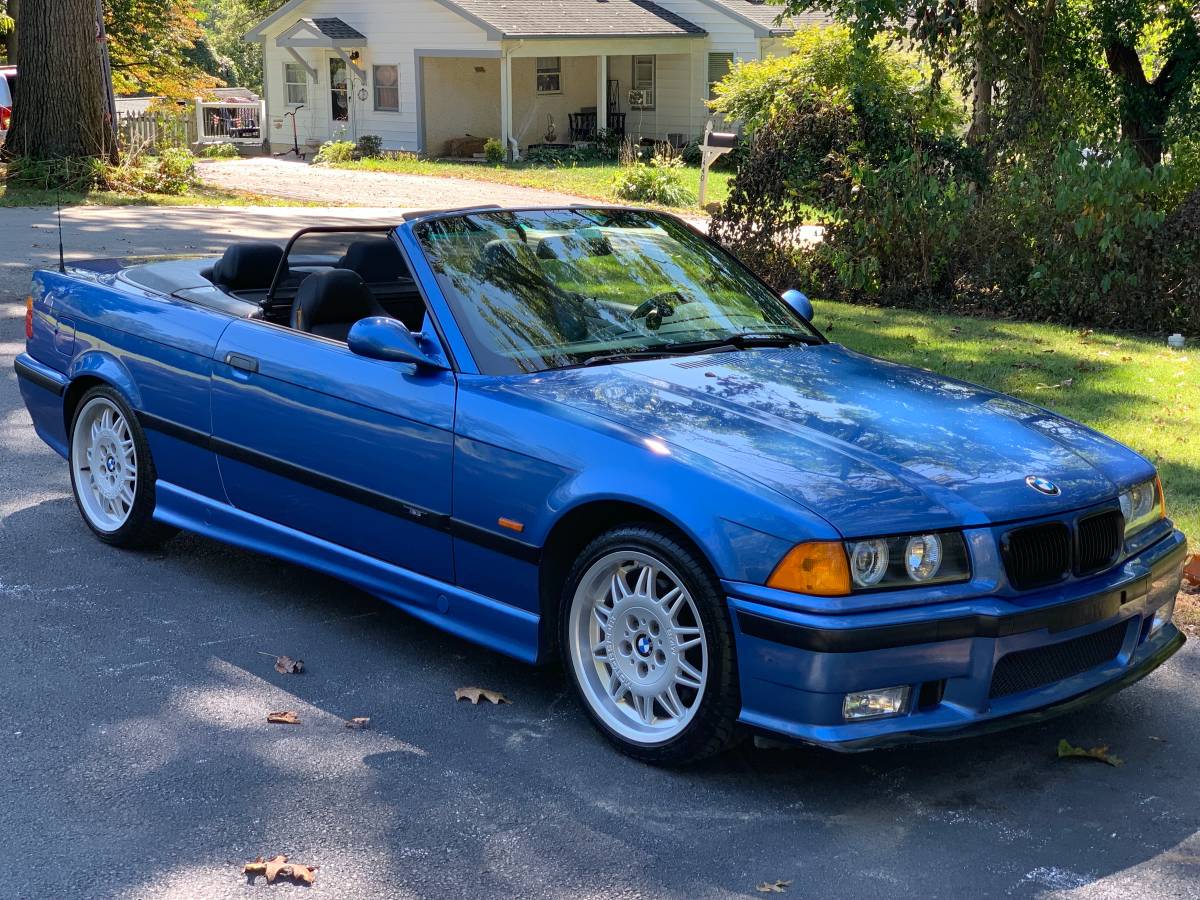 By the 1990s BMW was really on their game and the E36 version of their 3-Series sports sedan sold throughout the decade epitomized that.  Taking the performance up one notch further was the M3 version such as this Estoril Blue 1998 example listed in May of 2020 on Craigslist in West Chester, Pennsylvania where the seller is currently asking $9,500 for their high mileage, yet reconditioned, example.  Checking the Hagerty Insurance Online Valuation Tool confirms this private seller has his M3 priced somewhere between the #3 “Good” appraisal of $17,100 and the #4 “Fair” (Daily Driver) estimate of $7,400. Also, note that a 15% deduction applies as this car is factory equipped with the less desirable automatic transmission.

BMW’s motorsports division provides “M” versions of the brand’s 3-Series cars dating back to the E30 beginning in 1986.  The 1998 example presented here is the last year of the highly regarded E36 that came with the 3.2 liter S52 inline six-cylinder producing 240 horsepower and 236 foot-pounds of torque.  While modest by today’s standards, the E36 M3 is no slouch with a mid-six second 0-60mph time and 14-second quarter-mile times.  That’s still plenty of punch to easily get you into trouble on most public roads.  The E36 represents the last generation when BMW was really on their game and produced a true sports sedan that featured perfect hydraulic steering and a minimum of electronic controls.

While the E30 M3 was a big hit with enthusiasts, a star on the track, and a BMW performance icon, the company decided to go in a slightly different direction with the all-new second-generation E36 BMW M3 of 1992. While the first-generation car was a bit more track-focused and a bit boy racer with its box flares and rear wing, the E36 version was more civilized. Its styling was nearly identical to the standard 3-Series, it was more comfortable, and had more usable power to make it ideally suited to daily driving. That’s not to say the E36 was a slouch, though. It had 46 percent more horsepower than its predecessor, handled very well, and was generally regarded as one of the best all-around performers of the decade.

Under the hood was BMW’s S50 engine, making it the first M3 with a straight-six and it was equipped with BMW’s VANOS (variable camshaft spread) technology. At first, this was a 3.0-liter unit, but in 1995 it grew to 3.2 liters. Unfortunately for U.S. buyers, the engines on this side of the Atlantic were less potent than the ones in the euro market cars, making about 40 fewer horsepower. Euro cars also got a 6-speed with the arrival of the 3.2-liter engine, while the U.S. cars still made do with the 5-speed. 240 hp was still enough to get the U.S. BMW M3 from 0-60 in a little over six seconds, though, and it would still reach its limited top speed of 155 mph.

At first only available as a coupe, the M3 range soon expanded to include a sedan in 1997 and a convertible in 1998. 1997 also saw the introduction of the BMW Sequential M Gearbox, essentially an automatic with a manual shift mode. Such transmissions are fairly commonplace today, but in the 1990s this was pretty advanced stuff and only a handful of high-end manufacturers offered semi-automatic gearboxes. BMW’s system worked well and became an increasingly popular option.

Another change came in 1996 with staggered tire sizes – 225s up front and 245s in the rear. Otherwise, changes were minimal throughout the E36’s run before it was replaced by the E46 M3 for the New Millennium. The E36 BMW M3 won “Car of the Year” awards on both sides of the Atlantic, and it deserved them. Smooth power delivery from the straight-six and nimble handling made the M3 a particularly well-balanced car and it was quick enough to immediately become a popular track car. Ample convenience features and a relatively roomy back seat, even in two-door form, also made it just as good for the commute as it was for spirited driving. The E36 M3 was also made before BMW designs got so overly complicated, so enthusiasts can still do much of the work themselves.

Like any car, the E36 BMW M3 is not without its problems. It may have also depreciated to an affordable purchase price, but parts are still as expensive as ever. Rust is always worth checking for, and it’s a good idea to look for mounting cracks around the rear shock towers and trailing arm bushings as well. Coolant leaks are a red flag, and there is just one nut securing the sprocket for the oil pump, which can back off on its own and result in engine failure. On convertibles, the mechanisms of the standard power top can fail and are very expensive to fix. Almost 33,000 E36 M3s (including almost 19,000 coupes) were sold here, so it pays to wait for a really good example.

The E36 has been the most unloved of the M3s as it lacked the panache of the E30 and was soon overshadowed by the E46 that replaced it. That just makes them a sound value, though, because they are very rewarding cars to own and drive, and every bit the “Ultimate Driving Machine” that you’d expect from an M-badged BMW.”

As the seller’s description below indicates, many expensive parts have already been replaced on this 183K mile driver.  The one oddity the seller will need to clarify is the switch from the original Dove Gray to the black leather interior.  As these cars depreciate and become more affordable you tend to see too many “hoonigan” style modifications being made to what was an already well-designed automobile.  Beyond the upgraded stereo and cooling system components, we don’t see any of that going one here.  Despite all of the parts replaced to date and given the high mileage, it’s worth the money to get a pre-purchase inspection completed on this M3.  Hopefully, you can benefit from all of the maintenance already performed without the need for you to add more to it.  Good luck with the purchase!

“1998 bmw m3 convertible Estoril blue exterior dove grey interior 183500 miles. the car has been thoroughly refreshed as you will see by the list of things that have been done to it so far.