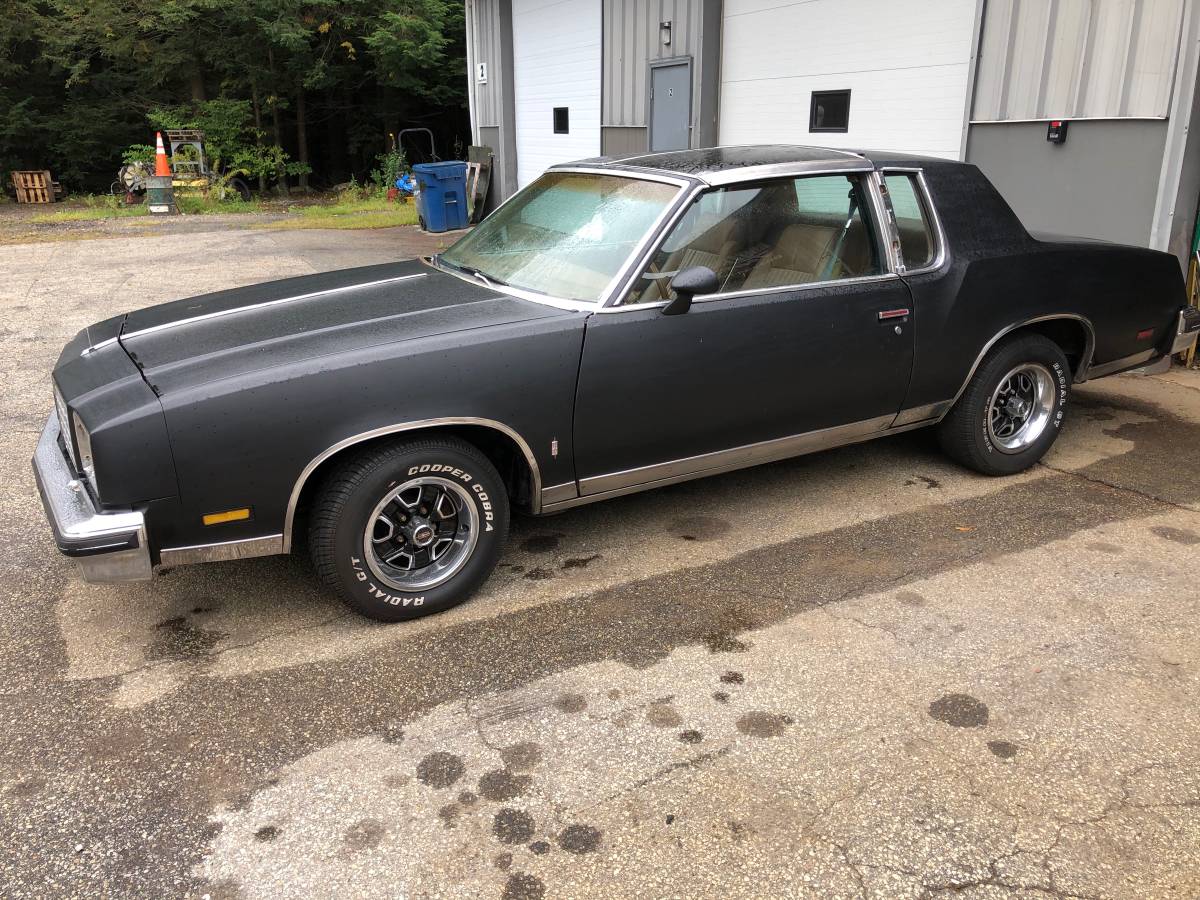 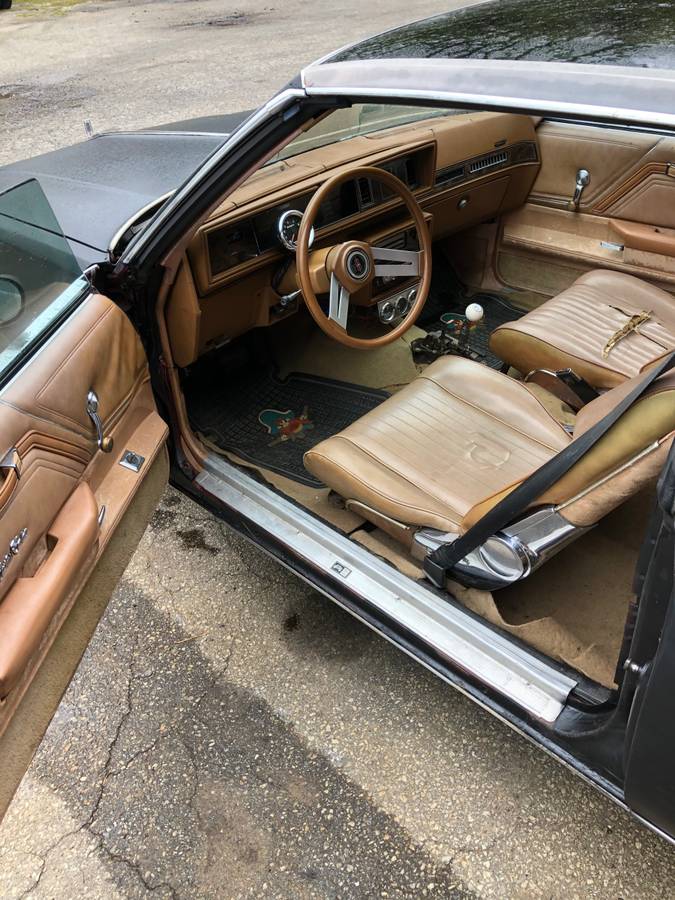 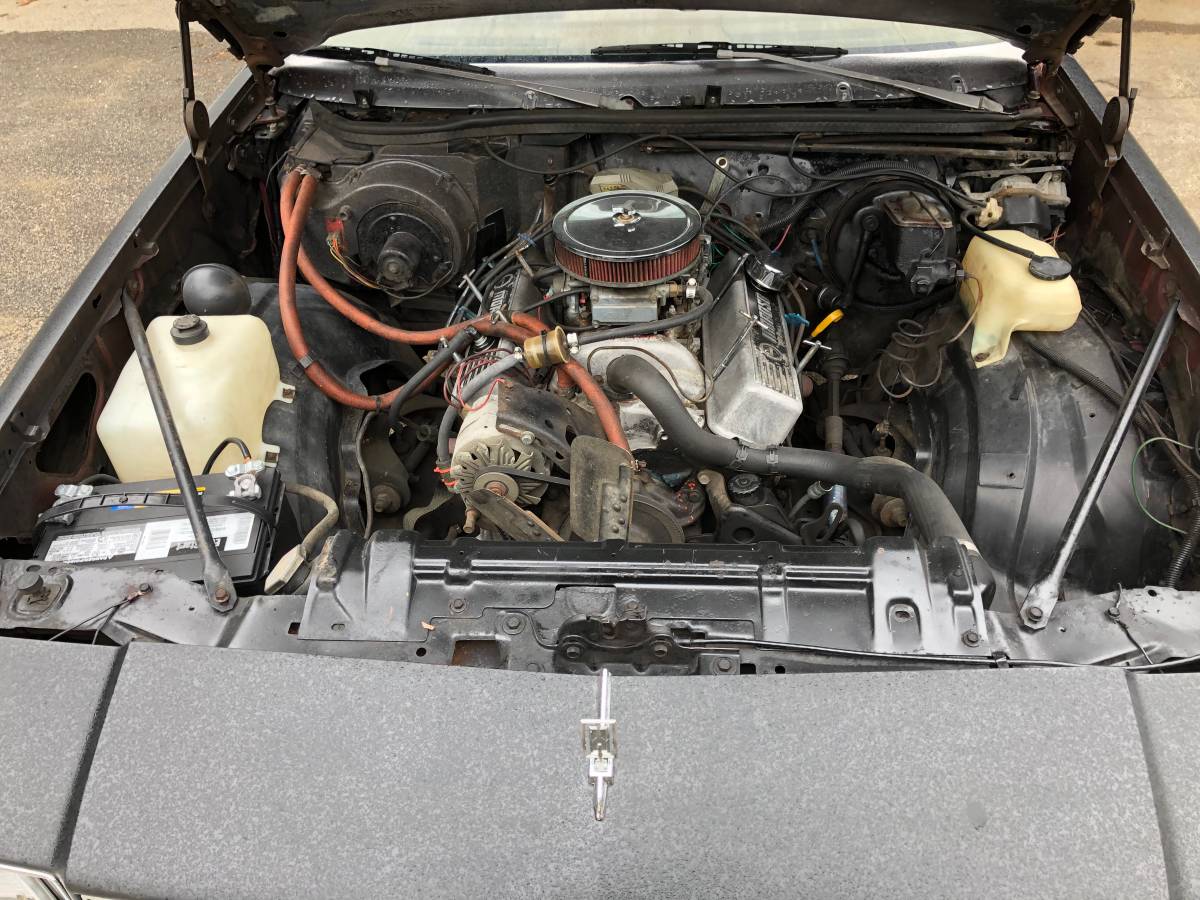 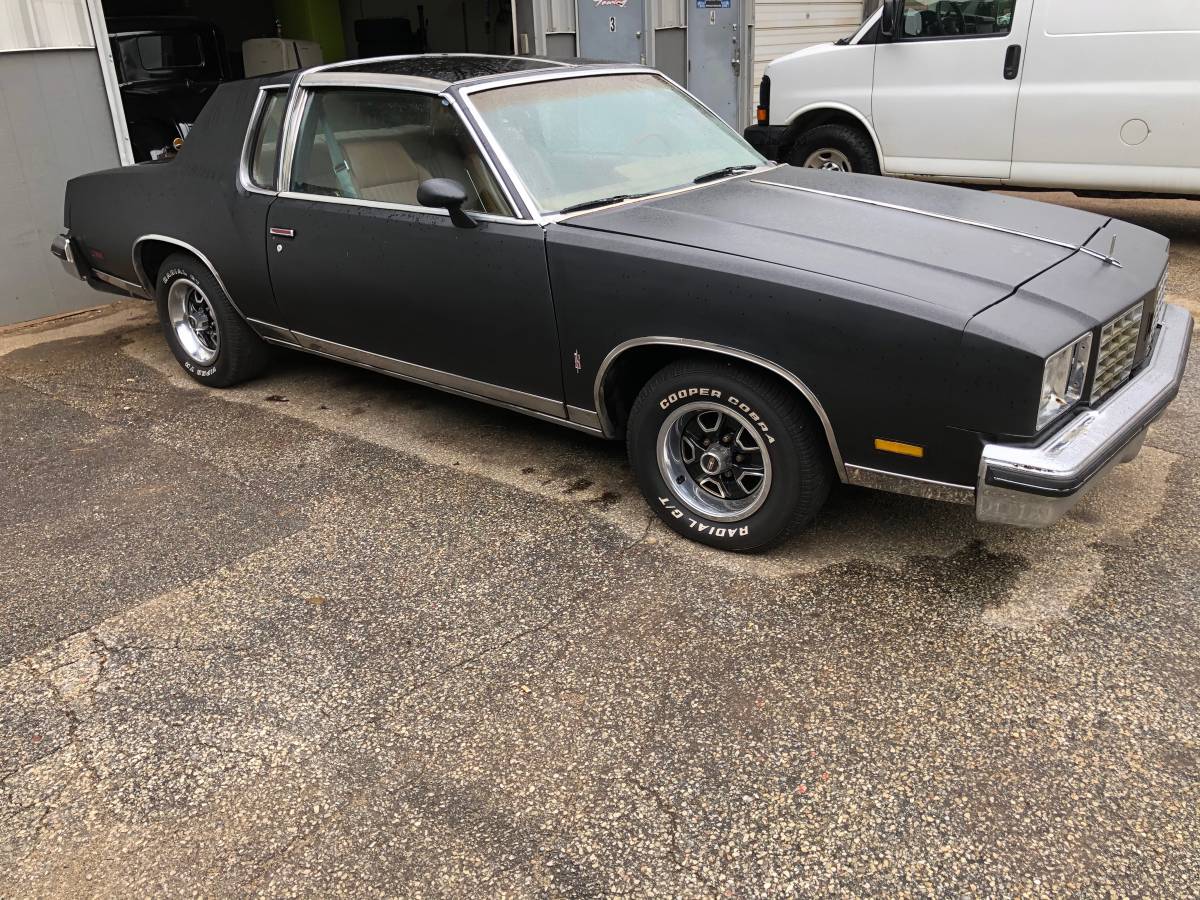 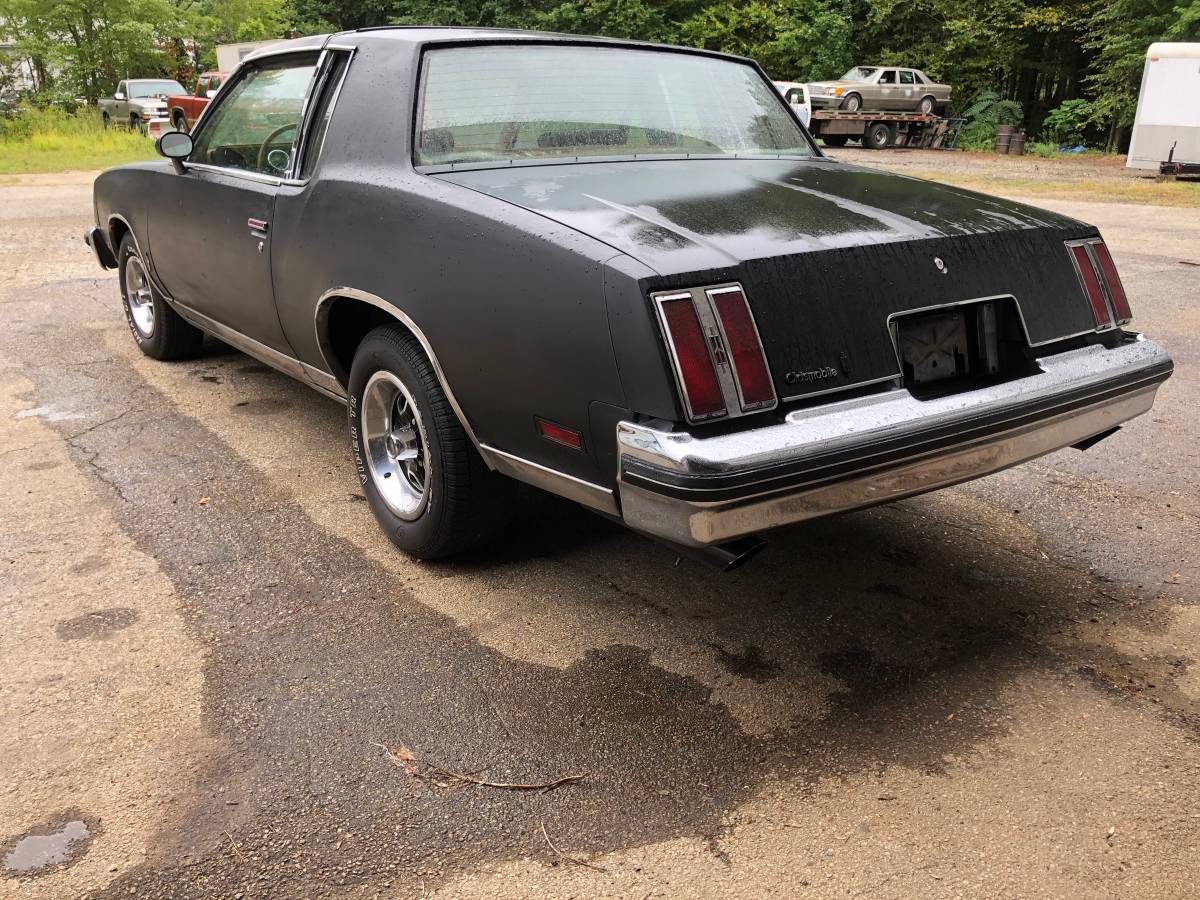 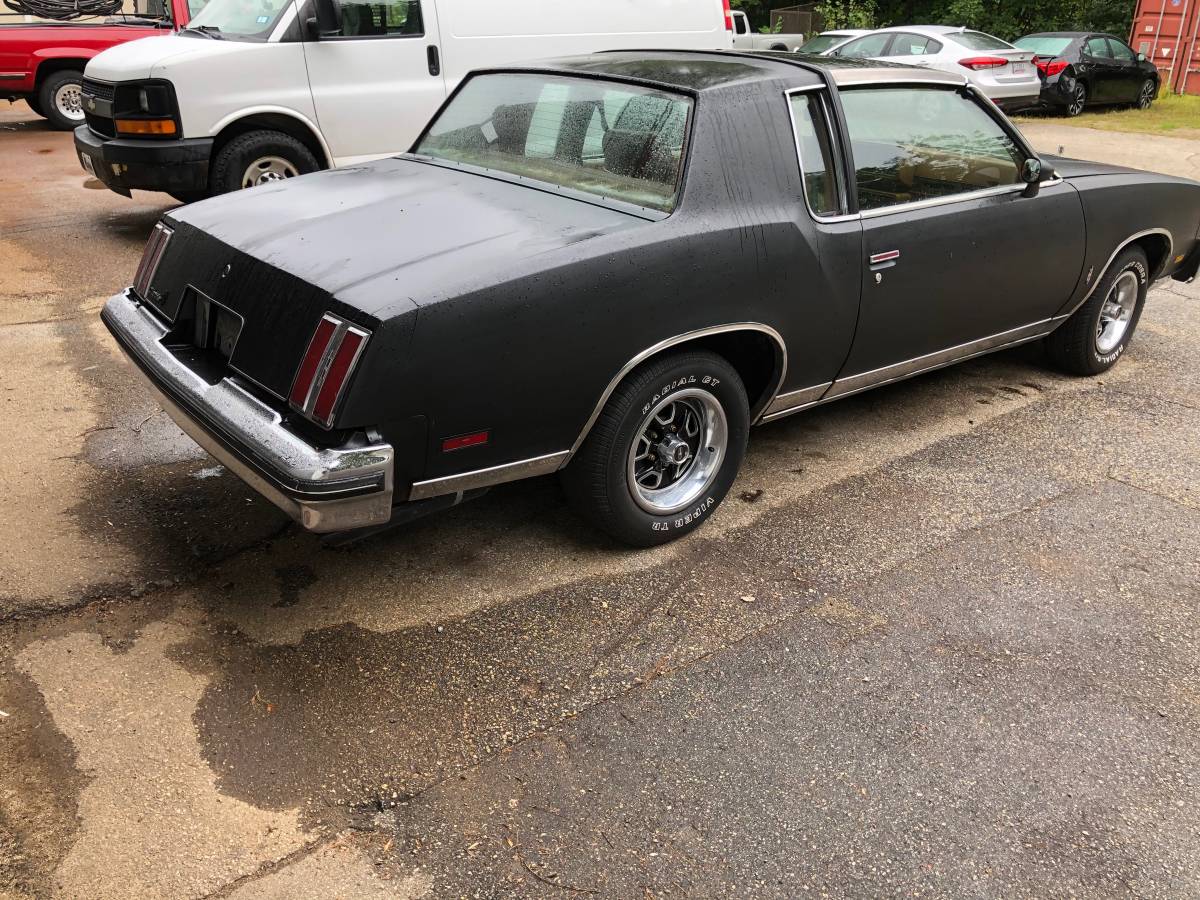 October 11th Update: While updating our Malaise Monday database, we confirmed the private seller of this ’79 Olds Cutlass we first featured recently deleted their Craigslist ad, so we’re now able to call this one “Sold!”  This one may have got away, but if you have your heart set on something similar, email us the details of what you’re looking for or call Rudy directly at (908)295-7330.

Mid-size personal luxury two-door coupes were the popular choice among American car buyers of the late 1970s and leading this segment for 1979 was Oldsmobile’s Cutlass lineup. While the top-trim Cutlass Supreme Brougham was the choice for most, the Cutlass Calais model such as this bucket seat, V8, and T-Topped equipped example currently listed on Craigslist in September 2020 in Hampstead, New Hampshire provided a sportier alternative.  Currently equipped with a 350 cubic inch Chevy V8 and a Ford nine-inch rear end, the private seller of this street-machine-in-the-making has Calais “priced to sell” at $3,900. Using the Collector Car Market Review Online Tool as a primary guide confirms the private seller has his Olds priced between the #4 “Fair” estimate of $2,000 and the #3 “Good” appraisal of $4,000.  As a second data point, the NADA Guides Classic Car Online Valuation Tool shows the asking price falls towards the high end of the current “Low”, “Average”, and “High” retail value range of $1,109, $2,789, and $4,139, respectively.

For 1978, GM downsized Oldsmobile’s version of the Cutlass A-body with a shorter, 108-inch wheelbase and a much lighter 3,300-pound weight.  The ’78 Cutlass lineup included the Salon and Salon Brougham fastback coupes and sedans and the formal roof Supreme, Supreme Brougham, and Calais coupes. The Salons quickly proved to be far less popular than the notchback Supreme and Calais coupes. There were also “two-seat” (6 passengers in two rows) Cutlass Cruiser and Cutlass Cruiser Brougham station wagons; both being smaller, more conventional replacements of the three-seat (eight-passenger) Vista Cruiser.

Broughams featured softer, quieter rides, and fancier trim and upholstery. A factory T-top was optional on notchback coupes only. The 4-4-2 appearance and handling package, available on Salon coupes, featured large lower body stripes and 4-4-2 decals outside but not always shown with decals, unique 4-4-2 seats and badges inside, and a taut performance suspension featuring quicker-ratio steering, heavier springs, stiffer shocks, a stiffer front stabilizer bar, a rear stabilizer bar, and bigger tires. The Cutlass Calais used essentially the same suspension as the 4-4-2, but it also came standard with several other performance and touring options, including full instrumentation, an aluminum spoked sport steering wheel, reclining front bucket seats, and a center console with floor shifter.

Cosmetically, the 1978 line continued through 1979 with only slight changes front and rear. A bewildering array of grilles were used on the different equipment levels for 1978 and 1979, including two sets each of slotted (Salon), waterfall (Supreme incl. Brougham), and an egg crate design such as the one used on the example featured here.

Here’s a 1979 Oldsmobile commercial we came across posted on YouTube that provides an overview of the Cutlass two-door notchback models offered that year:

The black-over-tan, T-topped equipped Cutlass notchback provides a great basis for a Malaise-ear street machine build that doesn’t break the bank during your initial investment. You can rely on the current power train now while you invest in restoring the straight body and interior.  Later on, we’d be looking at alternatives for an LS swap to really make this Olds stand out.  Whatever you decide to do, good luck with the purchase!