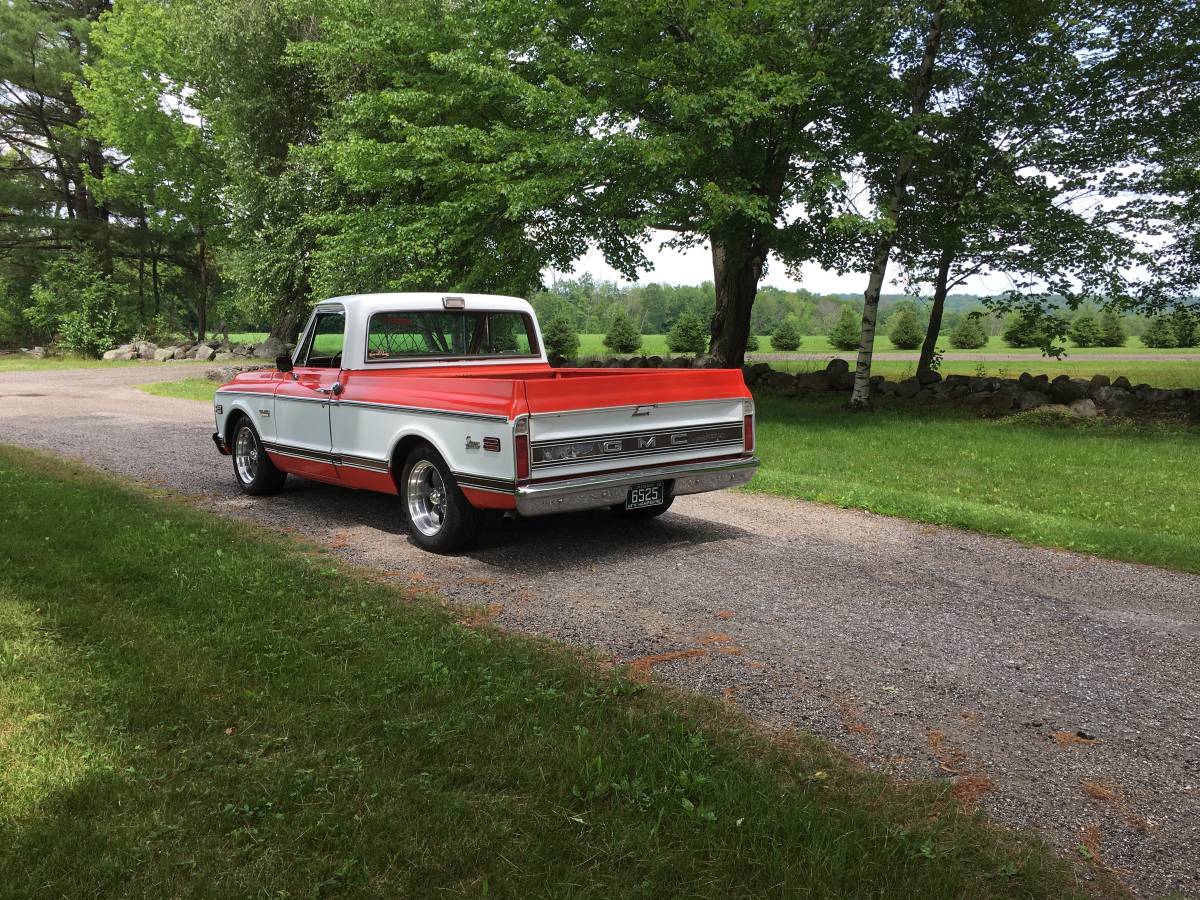 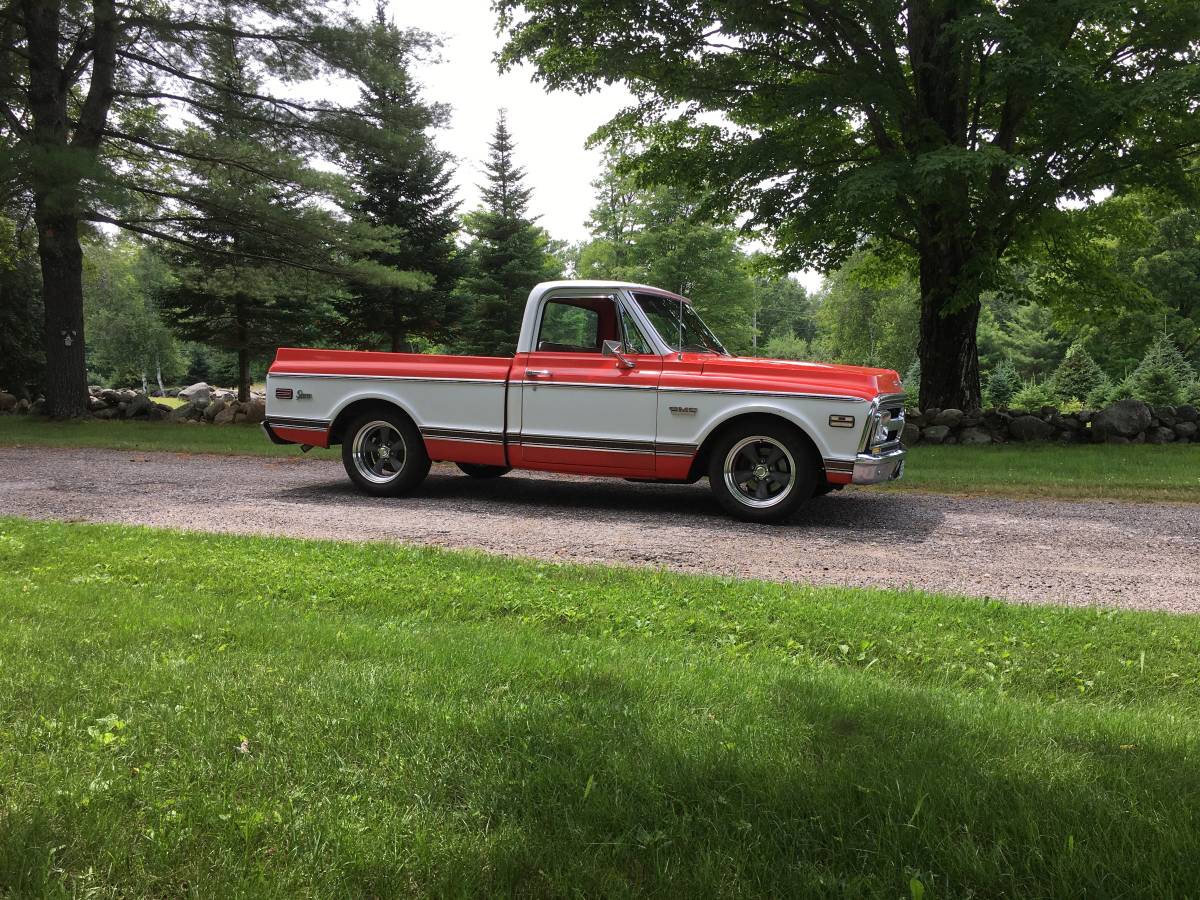 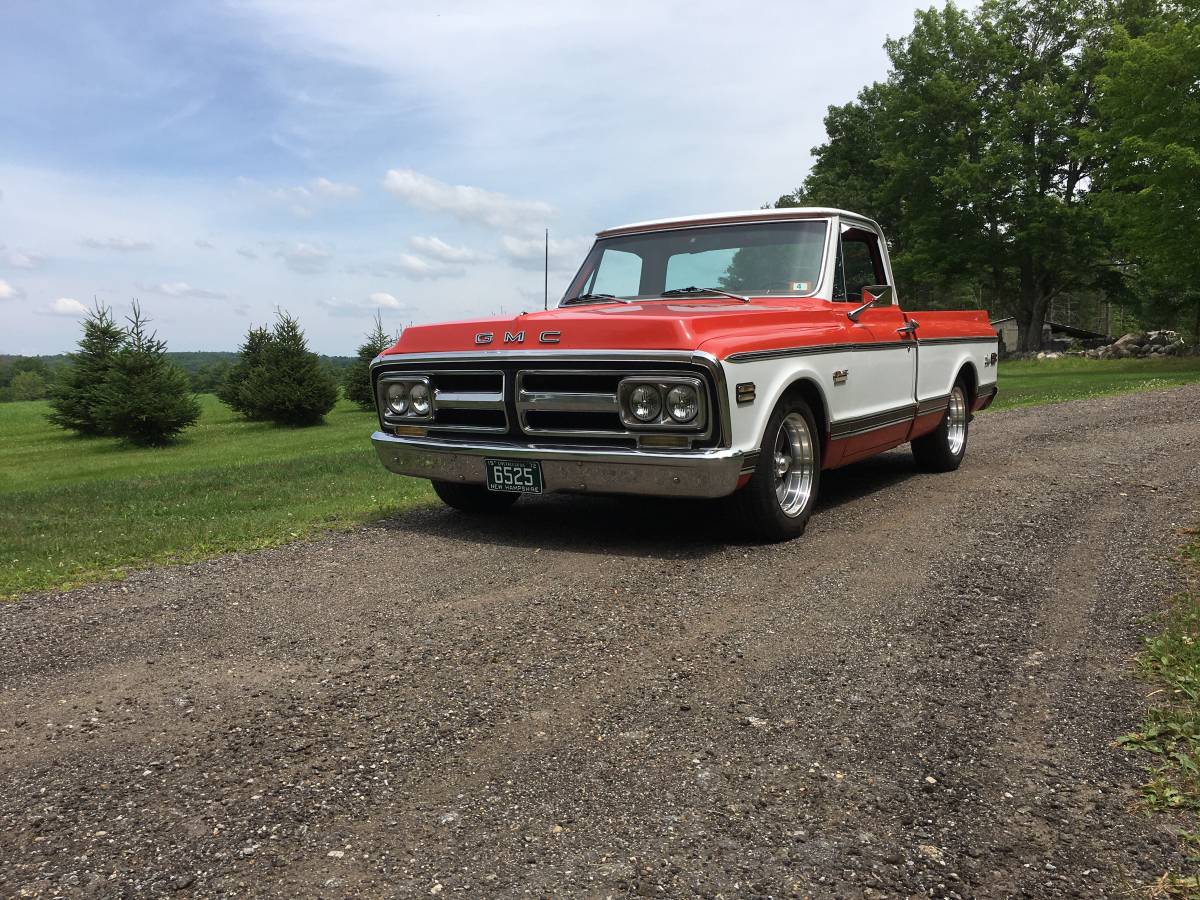 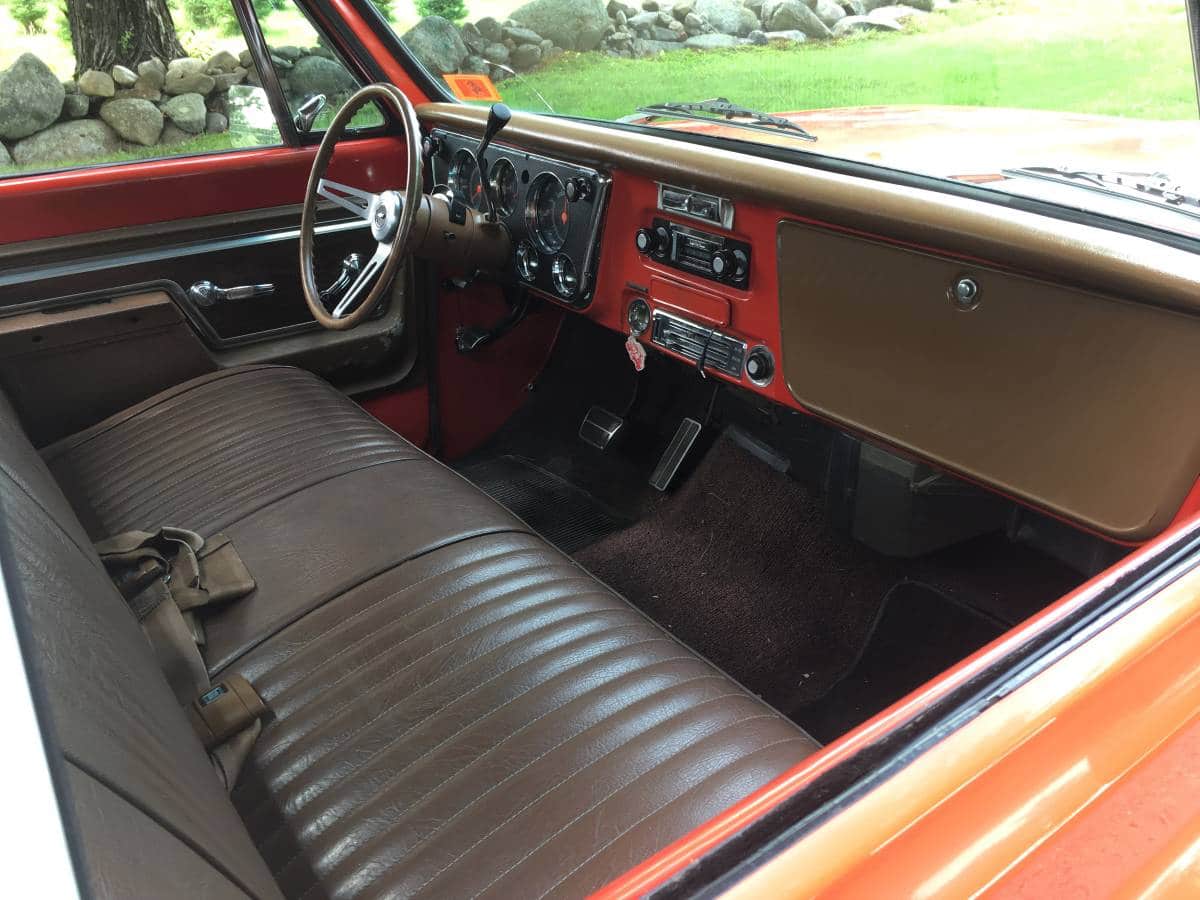 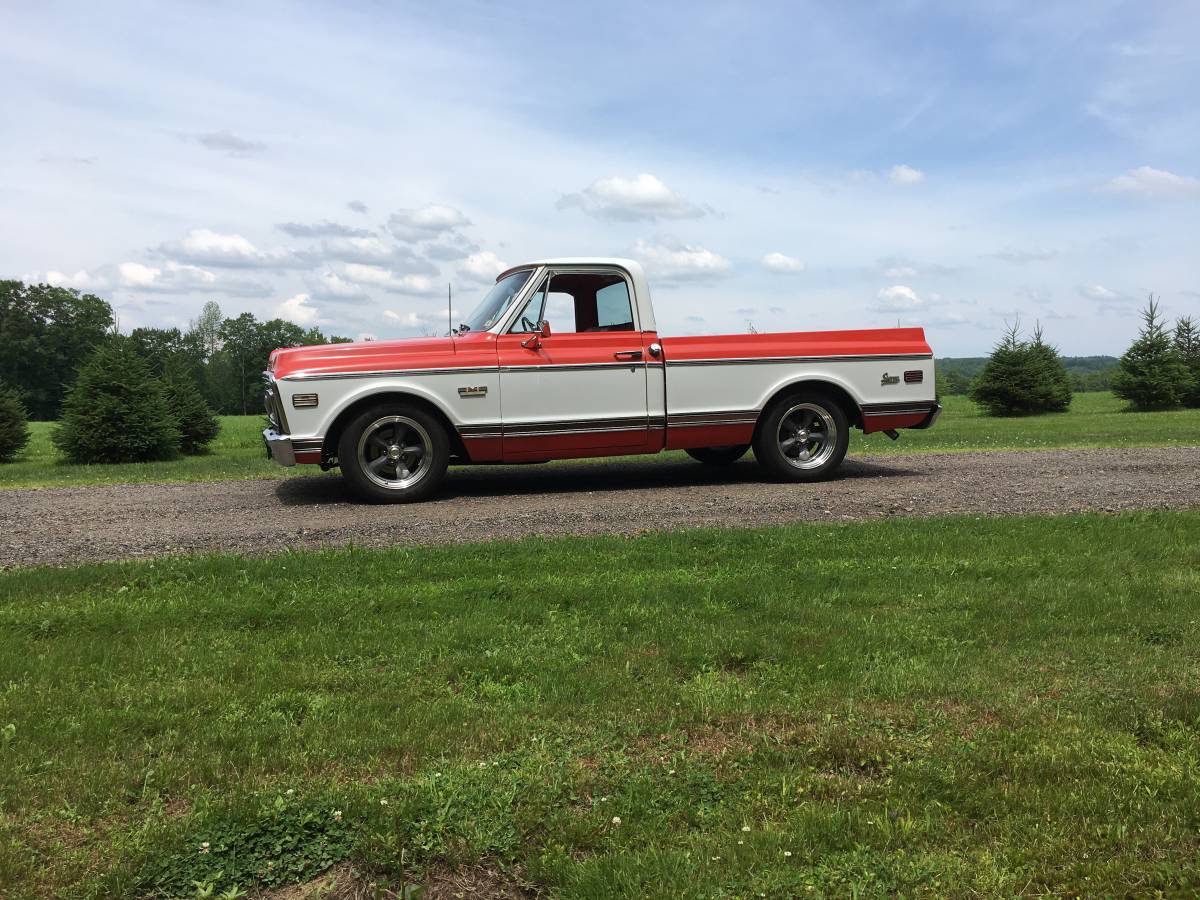 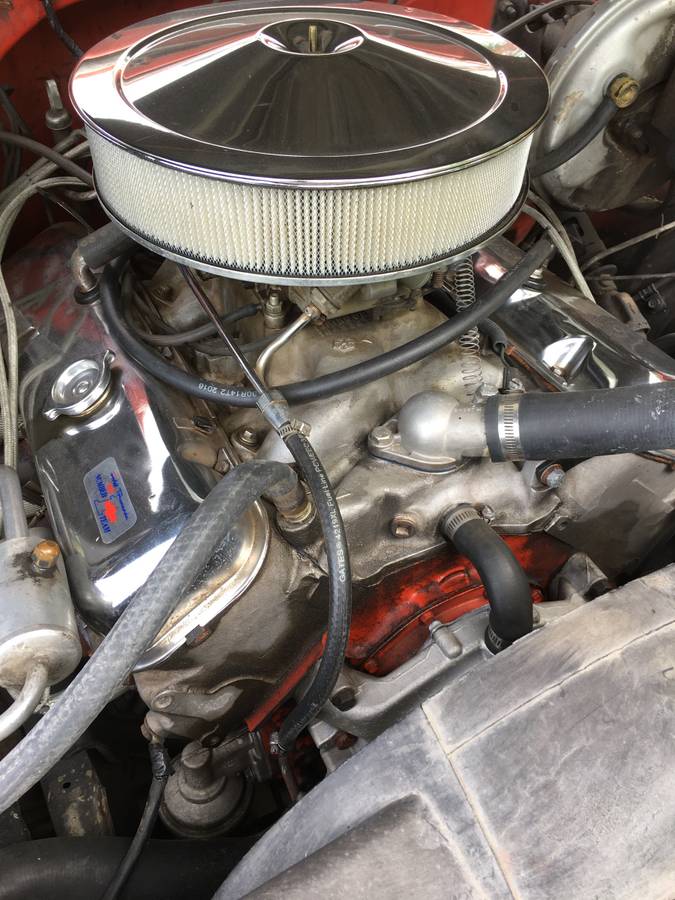 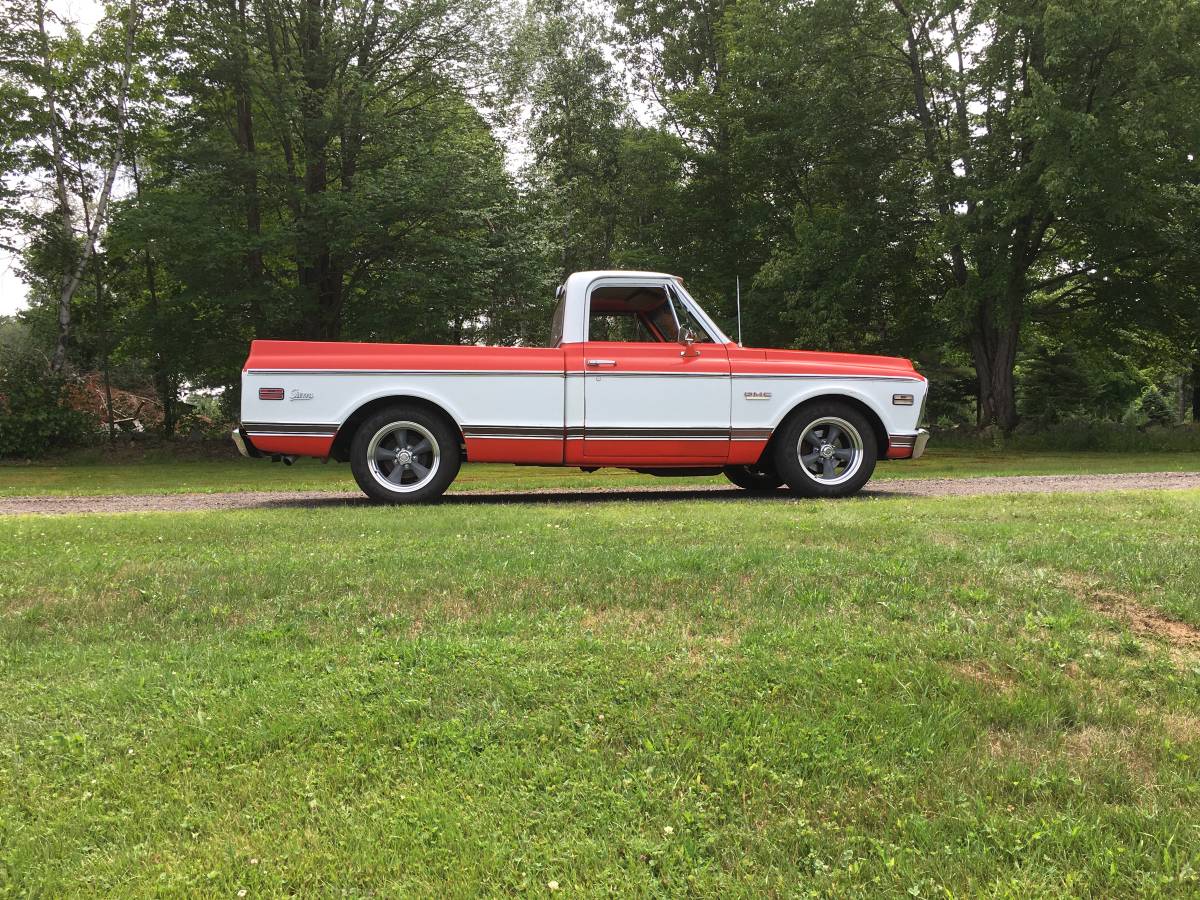 October 19th Update – During the past week, the Craigslist ad for this 1972 GMC Sierra expired, so with no replacement ad found, we’re assuming this truck is now sold.  This one got away, but if you have your heart set on something similar, email us the details of what you’re looking for or call Rudy directly at (908)295-7330

If you’re into vintage trucks, chances are good you know Chevy trucks came with equipped either styleside or stepside load beds.  Less widely known is that the virtually identical GMC truck equivalents came equipped with either wideside or fenderside beds. Similarly, the equivalent of Chevy’s Cheyenne trim level was the Sierra, and this 1972 two-whee- drive, short wideside bed, big block powered example we came across over the weekend here on Craigslist in Northfield, Massachusetts appears to be a pristine example.   Offered at $27,500, a quick check of the Hagerty Insurance Online Valuation Tool confirms this private seller has his Sierra priced between the #1 “Concours” appraisal of $38,600 and the #2 “Excellent” estimate of $22,100  If you are serious about buying this GMC, you can start the conversation by either calling the private seller at (603) 545-9801.  When you connect, please remember to mention you saw his Wideside featured here on GuysWithRides.com

General Motors (“GM”) built the second generation of nearly identical Chevrolet and GMC C/K trucks from 1967 through 1972.  Numerous changes occurred in 1971. First came another new grille design with black paint over portions of the GMC grille. Second, GMC launched its Sierra trim package, which was the equivalent of Cheyenne on Chevy versions.  These packages consisted mostly of comfort features — nicer interiors, more padding and insulation, carpet, chrome trim, and upper and lower side molding and tailgate trim. 1971 was the first year for factory-installed AM/FM radios. Finally, the front disc brakes were now standard on all light-duty C/K pickups. While prior C/K half-ton trucks had used a six-lug bolt pattern (6 x 5.5″) for the wheels, two-wheel-drive models switched to a five-lug pattern (5 x 5–inch bolt circle) common to all other GM passenger cars.  This bolt pattern remained the standard through the end of the C/K series (along with the Chevrolet/GMC vans).

The 1972 models were very similar to the 1971 models, with the only change being the rearview mirror was glued to the windshield rather than bolted to the top of the cab, and metal or vinyl-covered flat door panels were no longer available; all trim level door panels were molded plastic with integral armrests and wood grain inserts on Cheyenne and Sierra trim levels. GMC rearranged trim levels: by dropping the Deluxe level,  the Custom became the entry-level while the Sierra and Sierra Grande becoming separate trim levels at the top of the lineup rather than option packages as before.

The Osborn Tramain YouTube Channel has this interesting 1972 GMC commercial showing early signs of how consumers were starting to use pickups for both work and play:

We like the subtle rake and the vintage five-spoke rims currently used on this Sierra.  The private seller indicates this South Carloina sourced GMC carries most of its original paint.  We’d like to know whether the big block powering this original to the truck. Like it or not, the prices of these trucks continue to rise, so as long as the underside of this example checks out, you’ll likely at least break even if you decide to sell this Sierra in a few years.  Good luck with the purchase!