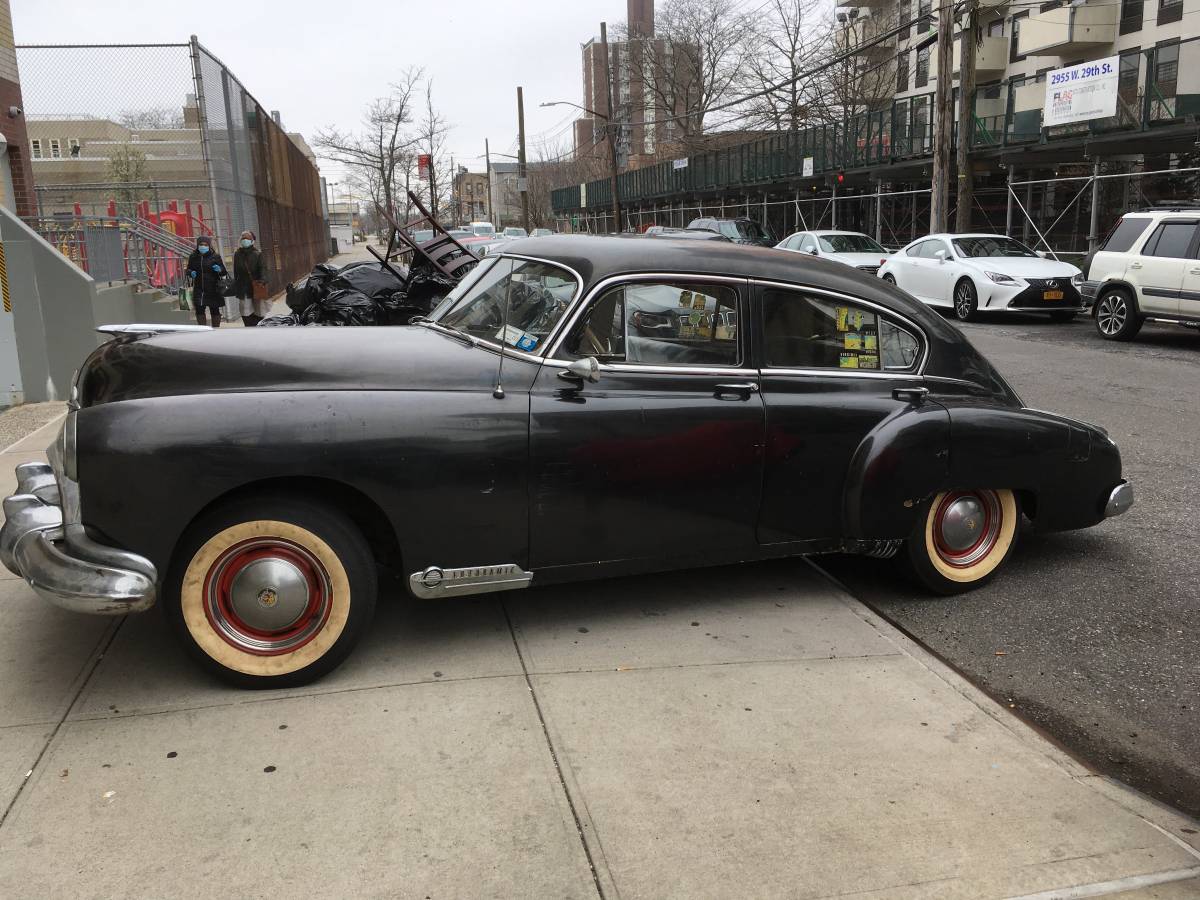 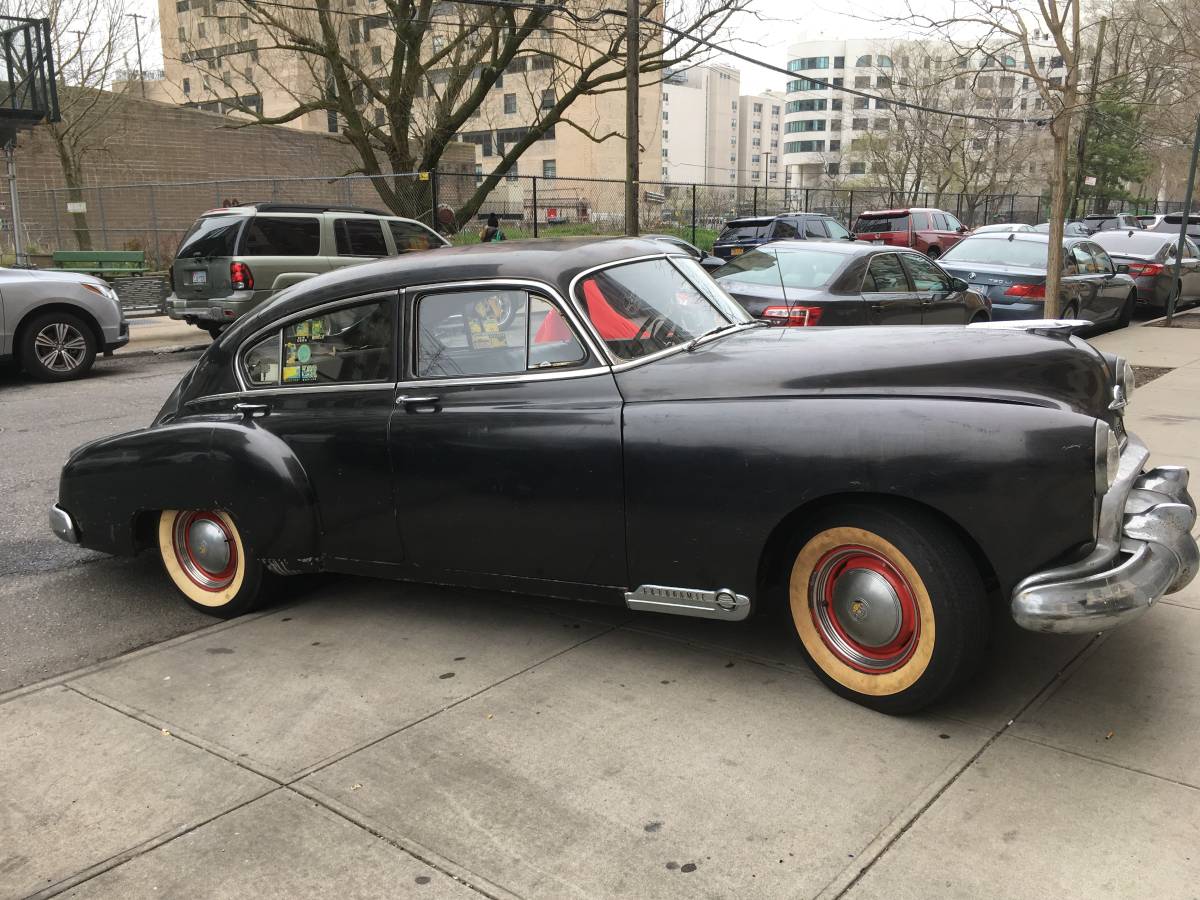 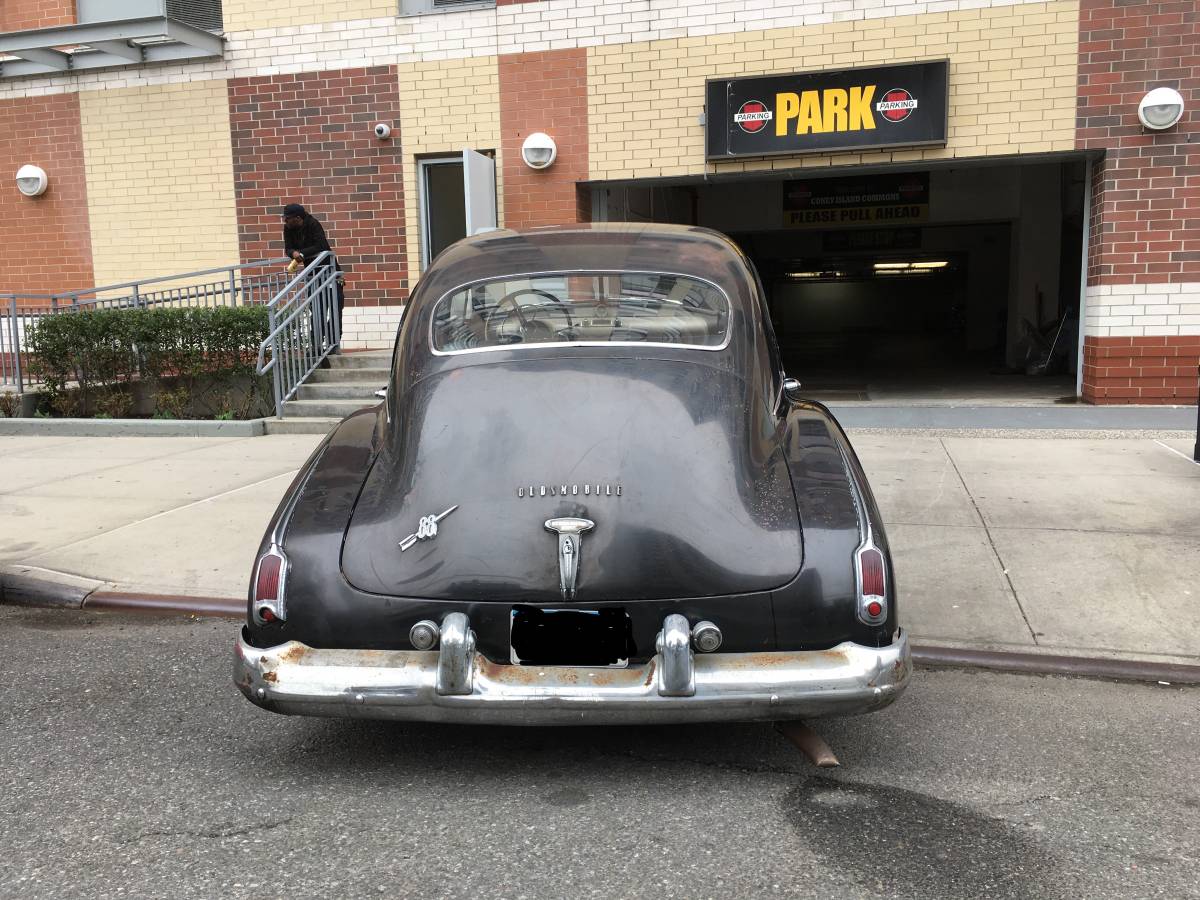 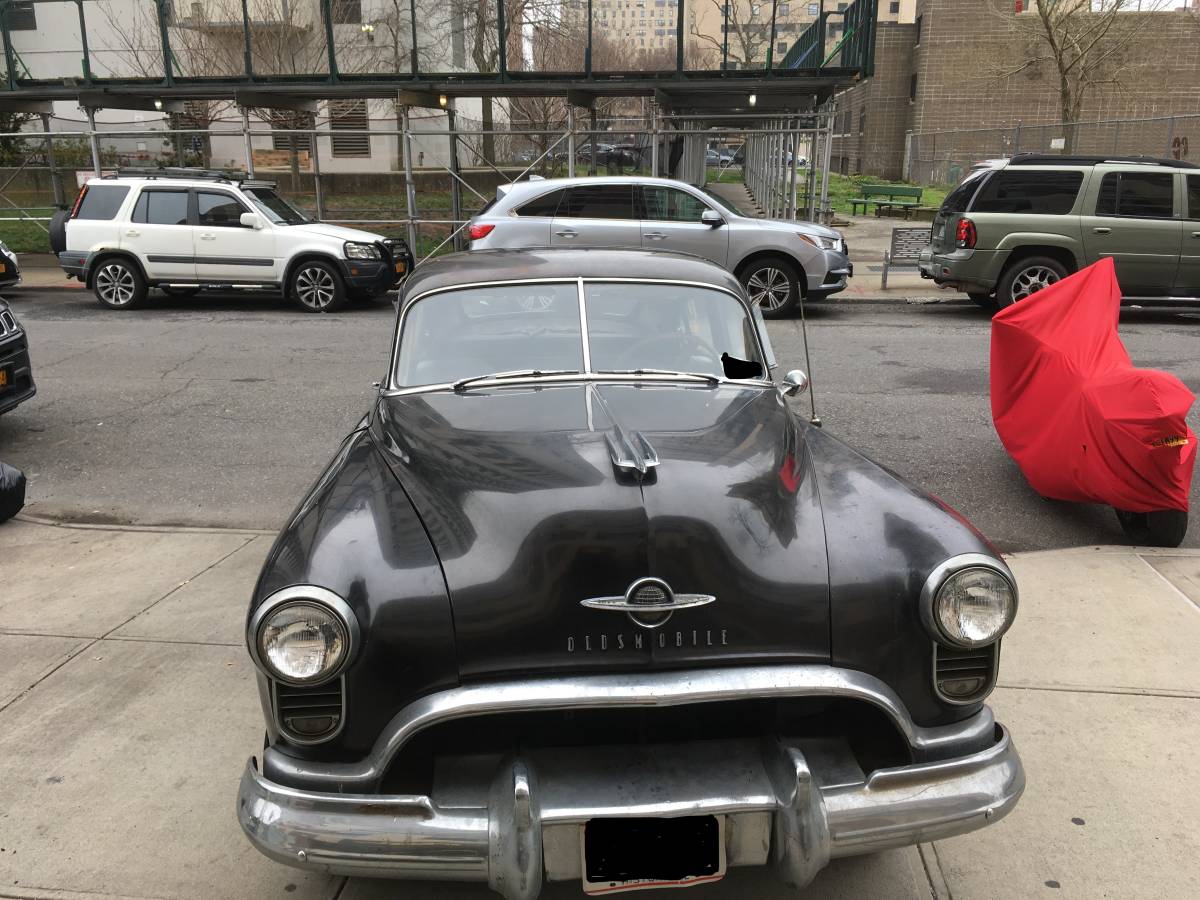 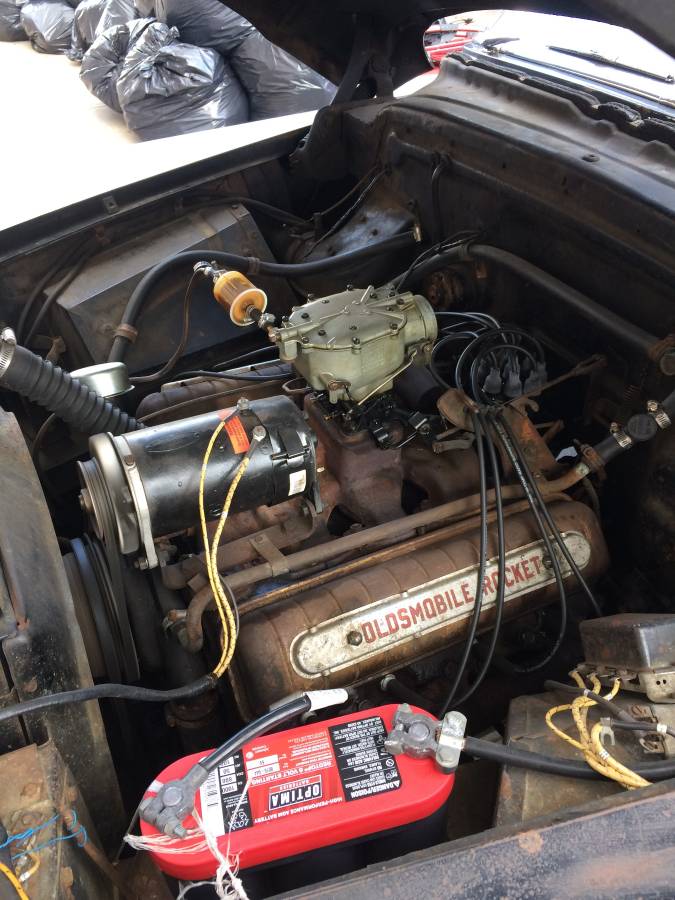 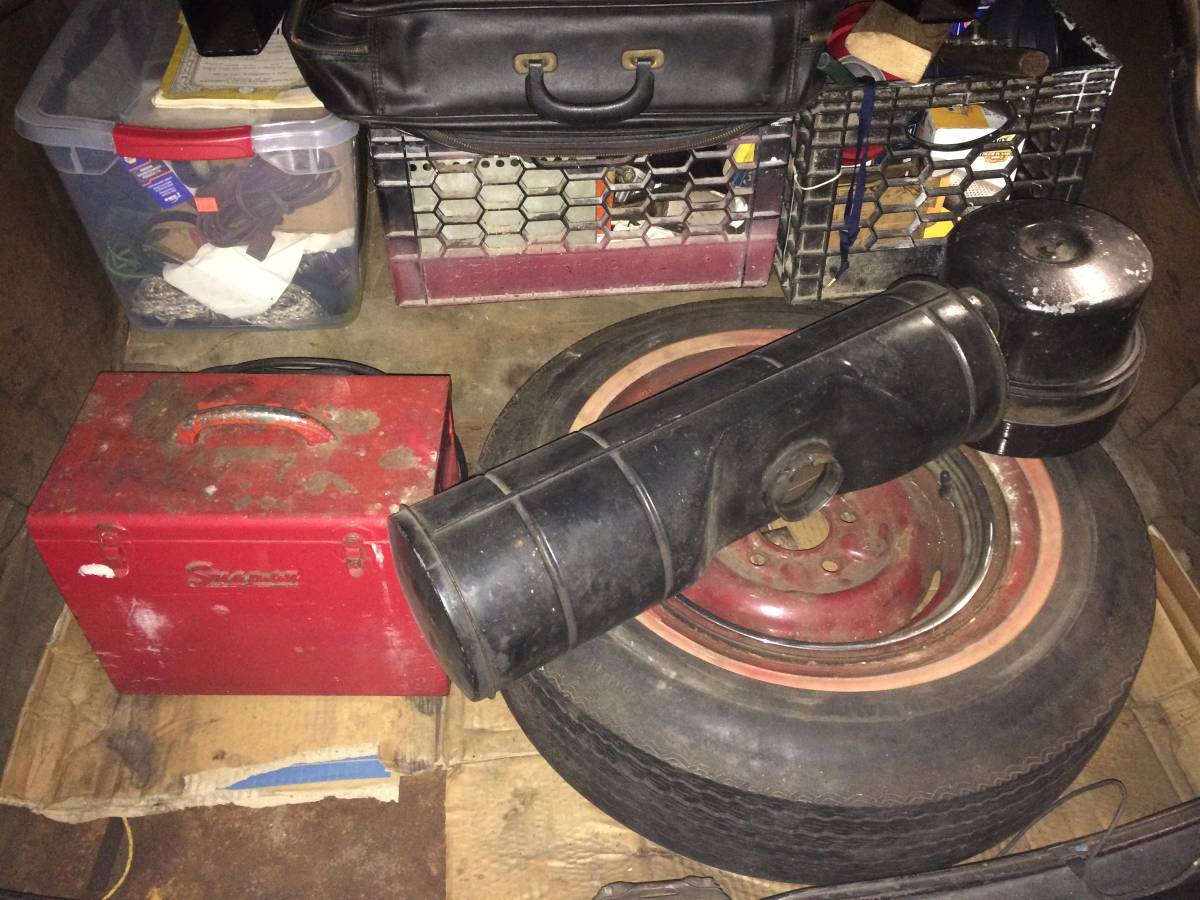 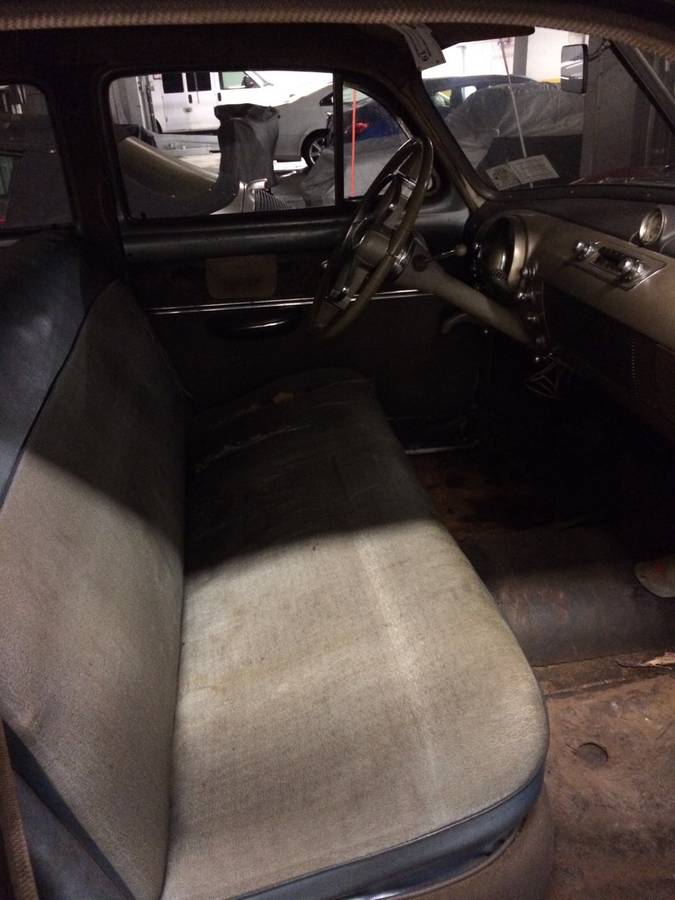 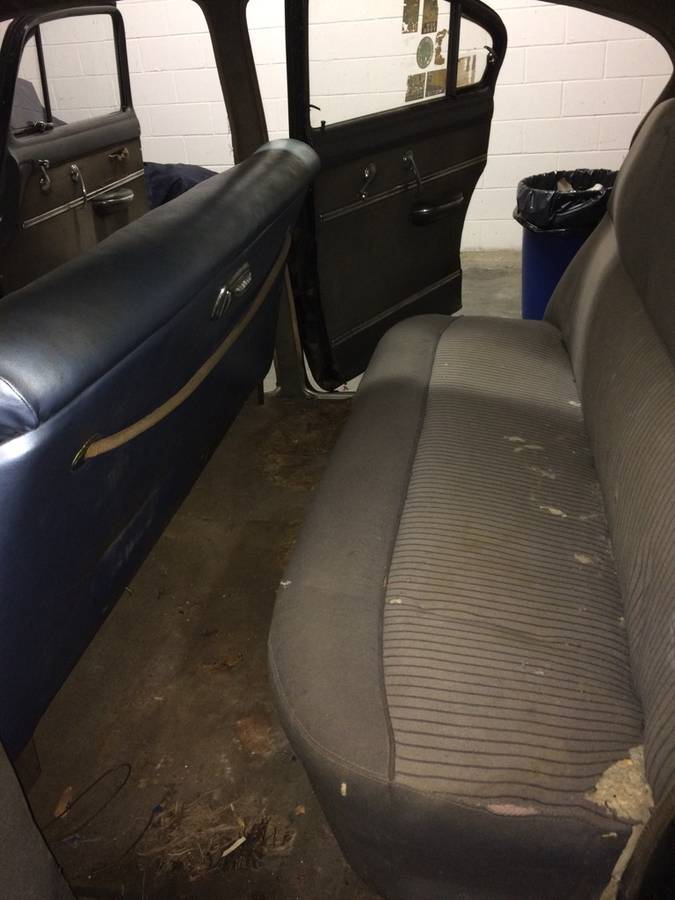 October 8th Update – The private seller of this milestone ’49 Oldsmobile we first featured August 18, 2020 just posted a fresh listing with the same pictures and asking price.

September 17th Update – While preparing for our latest Free For All Friday feature, we confirmed the original Craigslist ad for this ’49 Oldsmobile expired earlier this week. Despite indicating he would remove the listing once sold, with no other fresh ad found, for now we’re assuming this classic Futuramic 88 sold.

It’s hard to believe sixteen years have already passed since General Motors pulled the plug on its Oldsmobile division.  The brand was synonymous with innovations throughout its 106-year history. Among the most innovative model years was 1949 and this unrestored Oldsmobile Rocket 88 Futuramic Fastback listed here on Craigslist in the Coney Island section of Brooklyn, New York provides a glimpse of why.  With its fastback styling, 303 cubic inch overhead valve V8, and Hydramatic Automatic, this sedan is state-of-the-art post-World War II technology now offered for $7,800.  Comparing this price against the Hagerty Insurance Online Valuation Tool confirms this private seller has his 88 priced between the #3 “Good” appraisal of $9,000 and the #4 “Fair” (Daily Driver) estimate of $6,300. If you are serious about buying this Oldsmobile, you start the conversation by texting the seller at (718) 887-6369

Oldsmobile introduced its new 88 badges in 1949 to complement its existing 76 and 98 lines.  Replacing the straight-8 engined 78 in the model lineup, the new car used the same new Futuramic B-body platform as the straight-6 engined 76 but paired it with the new 303 cubic inch Rocket V8 engine producing 135 horsepower. This combination of a relatively small light body and large, powerful engine made it widely considered to be the first muscle car. The Rocket 88 vaulted Oldsmobile from a somewhat staid, conservative car to a performer that became the one to beat on the NASCAR circuits. It won six of the nine NASCAR late-model division races in 1949 which helped increase sales to the public. There was a pent up demand for new cars in the fast-expanding post-World War II economy, and the 88 appealed to many ex-military personnel who were young and had operated powerful military equipment.

The 88 enjoyed great success, inspiring a popular 1950s slogan, “Make a Date with a Rocket 88”, and also a song, “Rocket 88”, often considered the first rock and roll record. Starting with the trunk-lid emblem of the 1950 model, Oldsmobile would adopt the rocket as its logo, and the 88 name would remain in the Olds lineup until the late 1990s, almost until the end of Oldsmobile itself.

The 1949 model was equipped with an ignition key and a starter push-button to engage the starter. Pushing the starter button would engage the starter, but if the ignition key was not inserted, unlocking the ignition, the car would not start. The car was equipped with an oil bath air cleaner. At the bottom edge of the front fender directly behind the front wheel was a badge that said “Futuramic” which identified an Oldsmobile approach to simplified driving, and the presence of an automatic transmission. V8 Oldsmobiles were automatic-only in 1949 as Oldsmobile lacked a manual gearbox that could handle the torque of the new engine.

We love the unrestored exterior vibe this milestone Oldsmobile 88 emanates.  We would do nothing more to the exterior but polish and detail it to the best of our abilities.  This coming fall and winter provide a great opportunity to repair the floor boards and bring back the interior to its former glory in time for the 2021 car season.  Good luck with the purchase!

“Unrestored Four door 1949 Rocket 88 Futuramic Fastback V8. The original black paint shines up nicely when waxed but is thin in places. V8 motor and Hydromatic Automatic transmission. I am the third owner. The car has been garaged for 40 years and has very little rust with the exception of the interior floor boards that need repair. The 303 motor is a powerful all original beast that needs tweaking from the right person but runs great. The interior is worn and needs to be replaced. The chrome is intact but pitted.The speedometer cable broke decades ago so I do not know the mileage. The front end, brakes, front electrical harness and exhaust system, fuel pump, and battery have been repaired or replaced. SAE 30 oil and filter also changed. The tranny linkage needs adjustment but shifts and drives well. The car passed inspection in 2020.
I am asking $7800 negotiable. Cash pick up only. SERIOUS INQUIRIES ONLY. ATTN SCAMMERS: PLEASE DON’T WASTE YOUR TIME OR MINE.
I WILL NOT RESPOND TO “IS THIS STILL AVAILABLE ” or the like, the post will be removed when the car is sold.
The car is garaged in Coney Island Brooklyn.