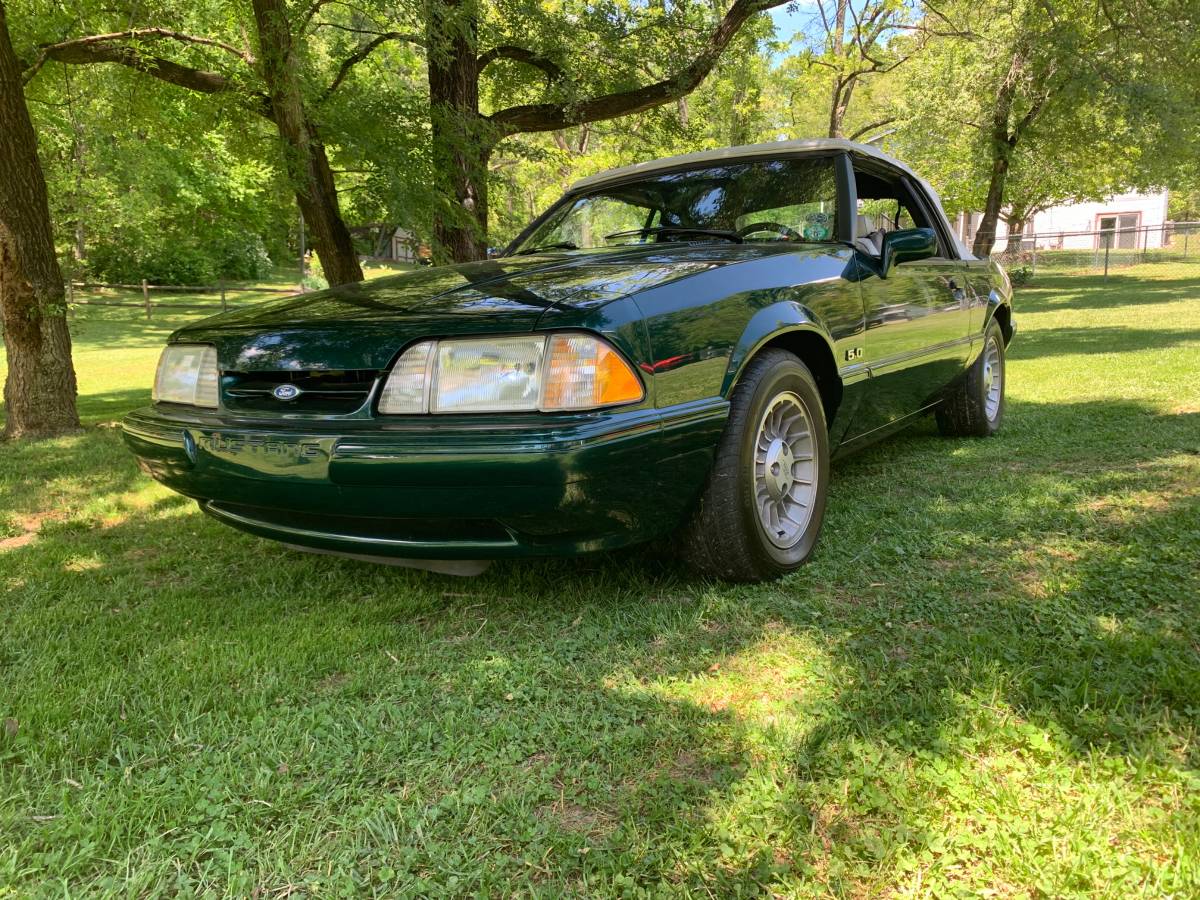 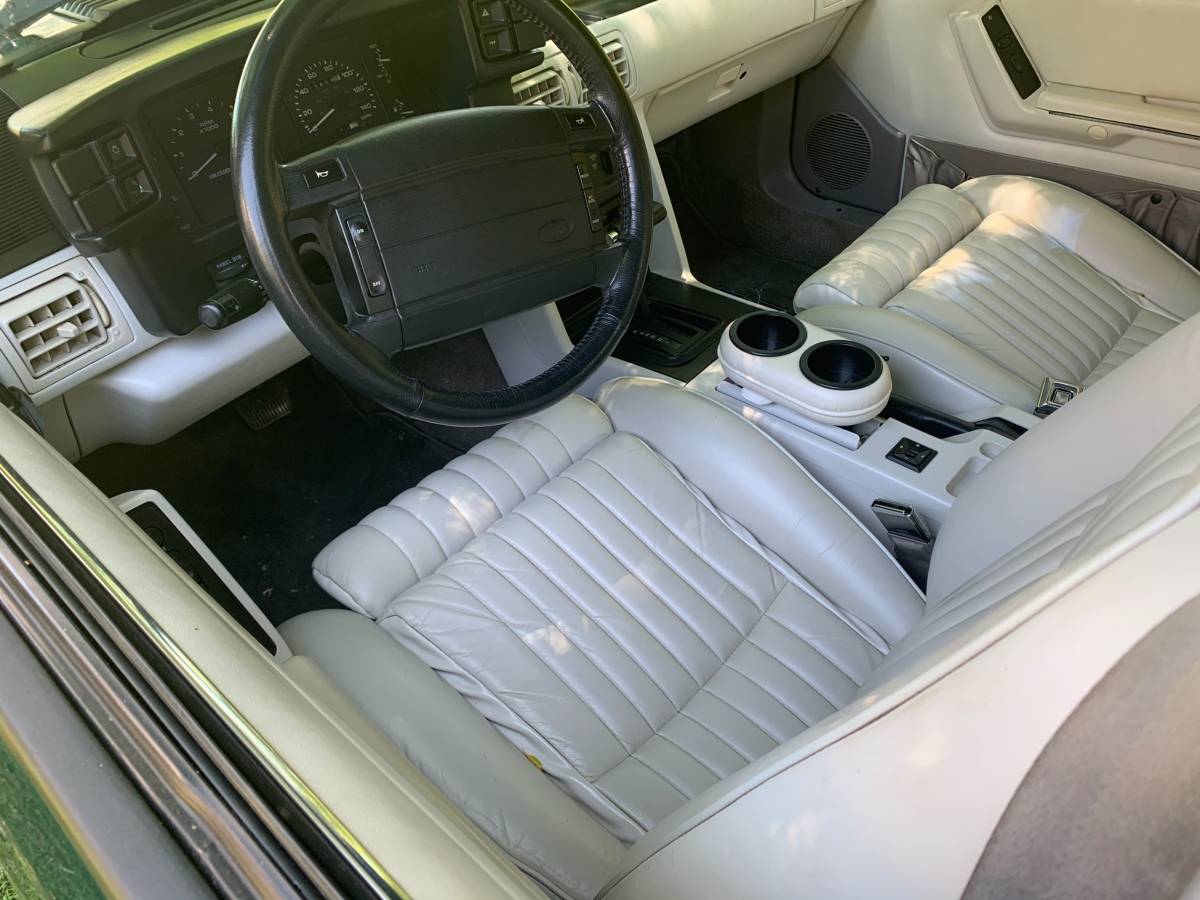 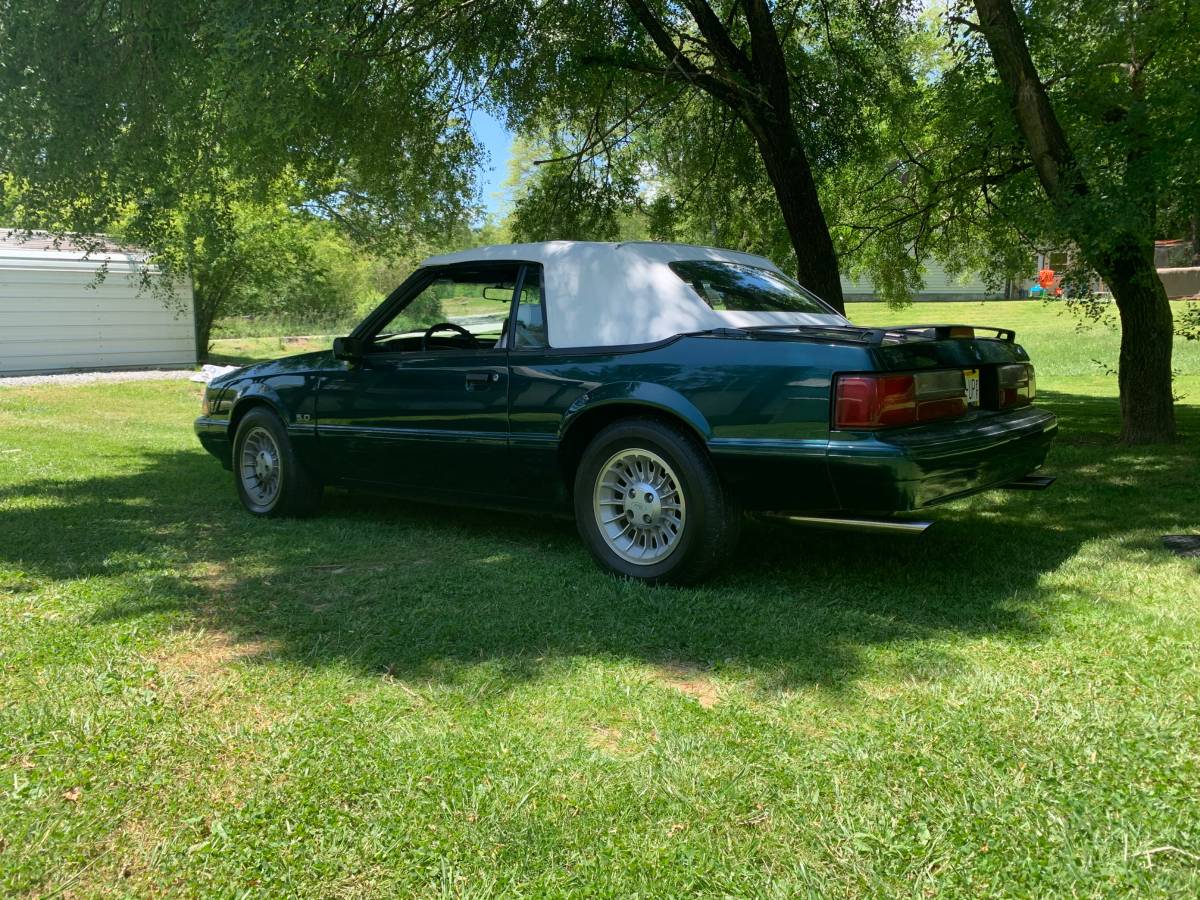 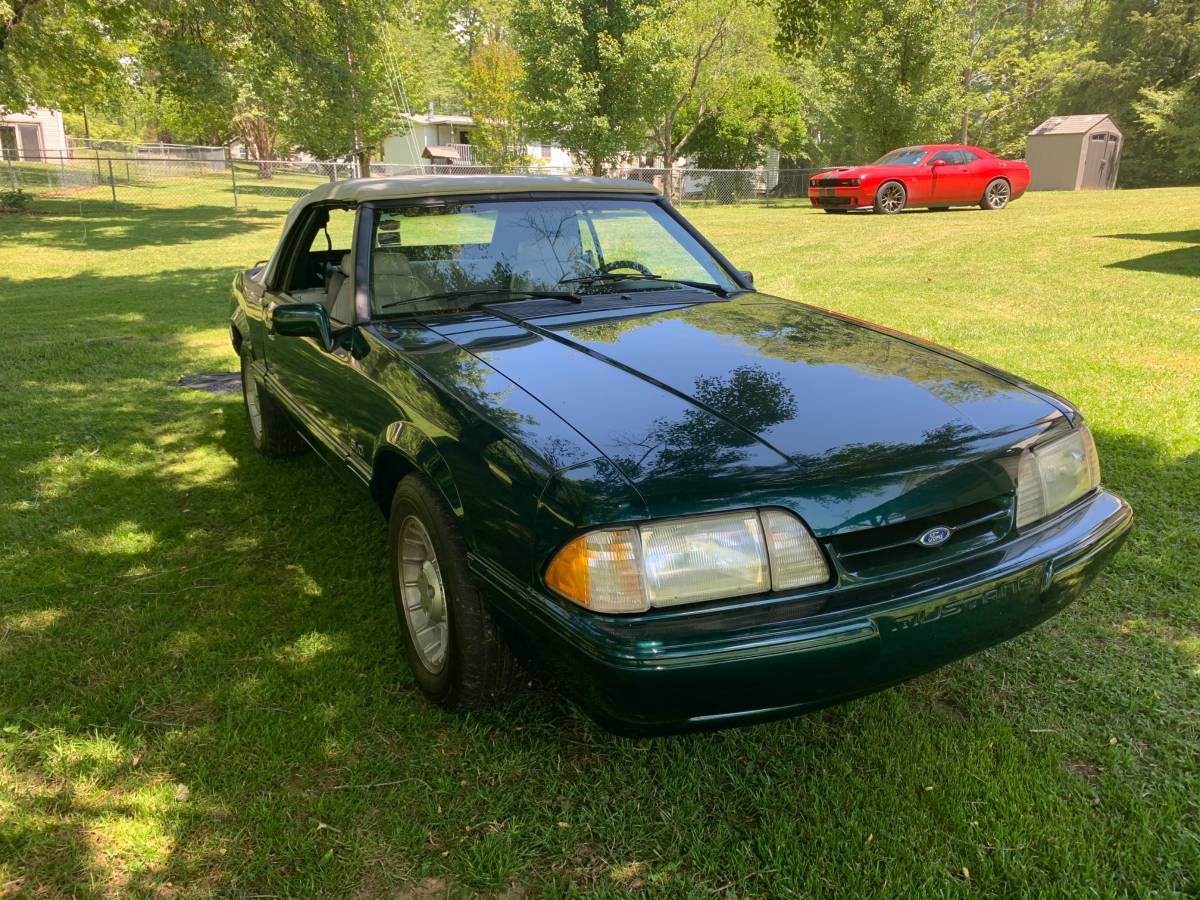 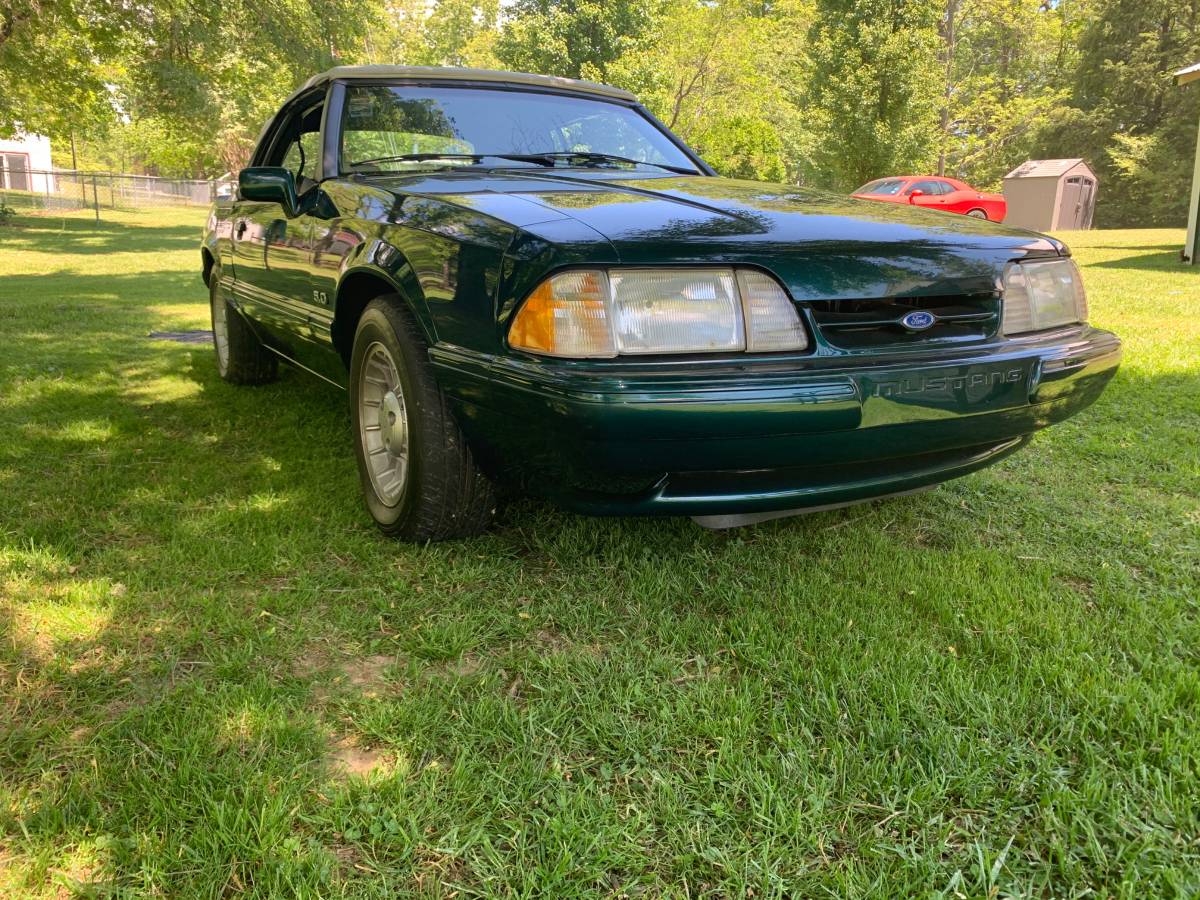 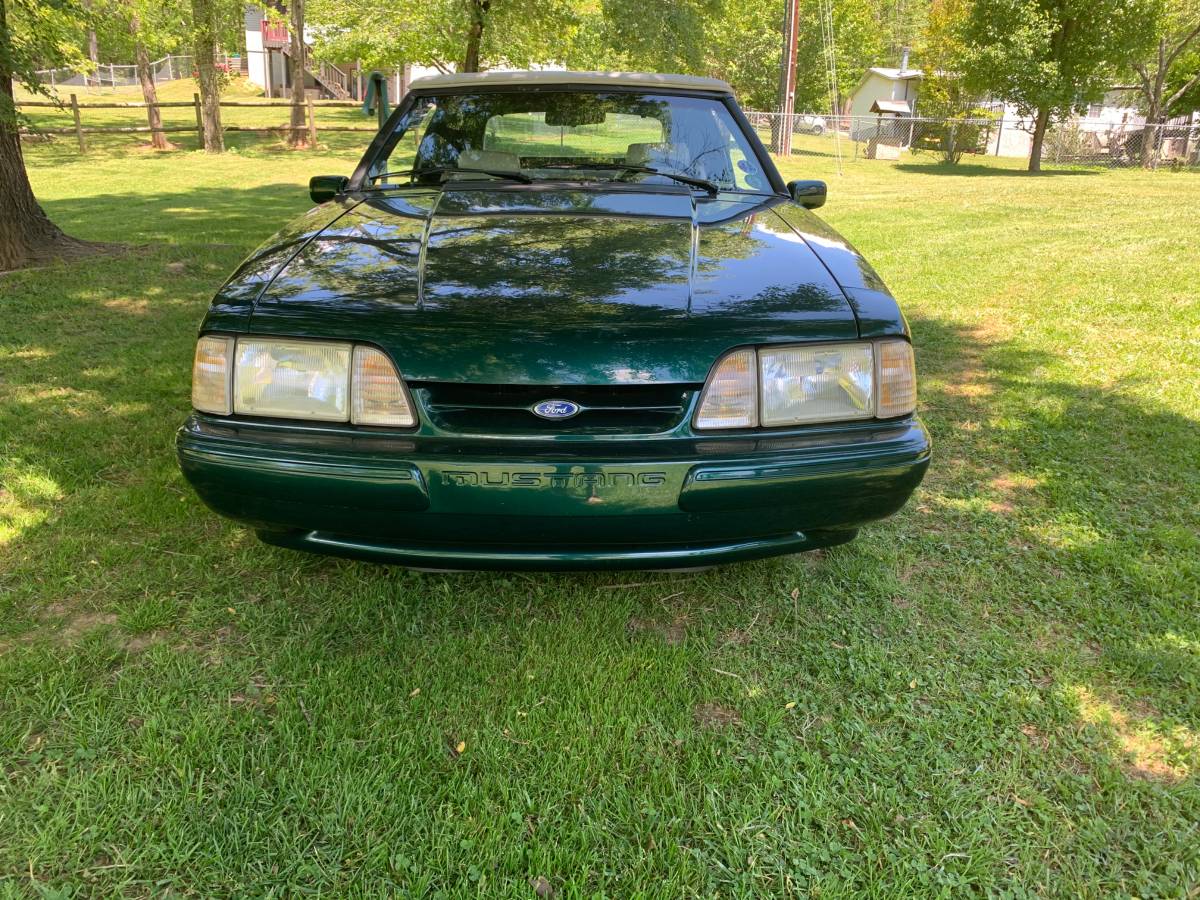 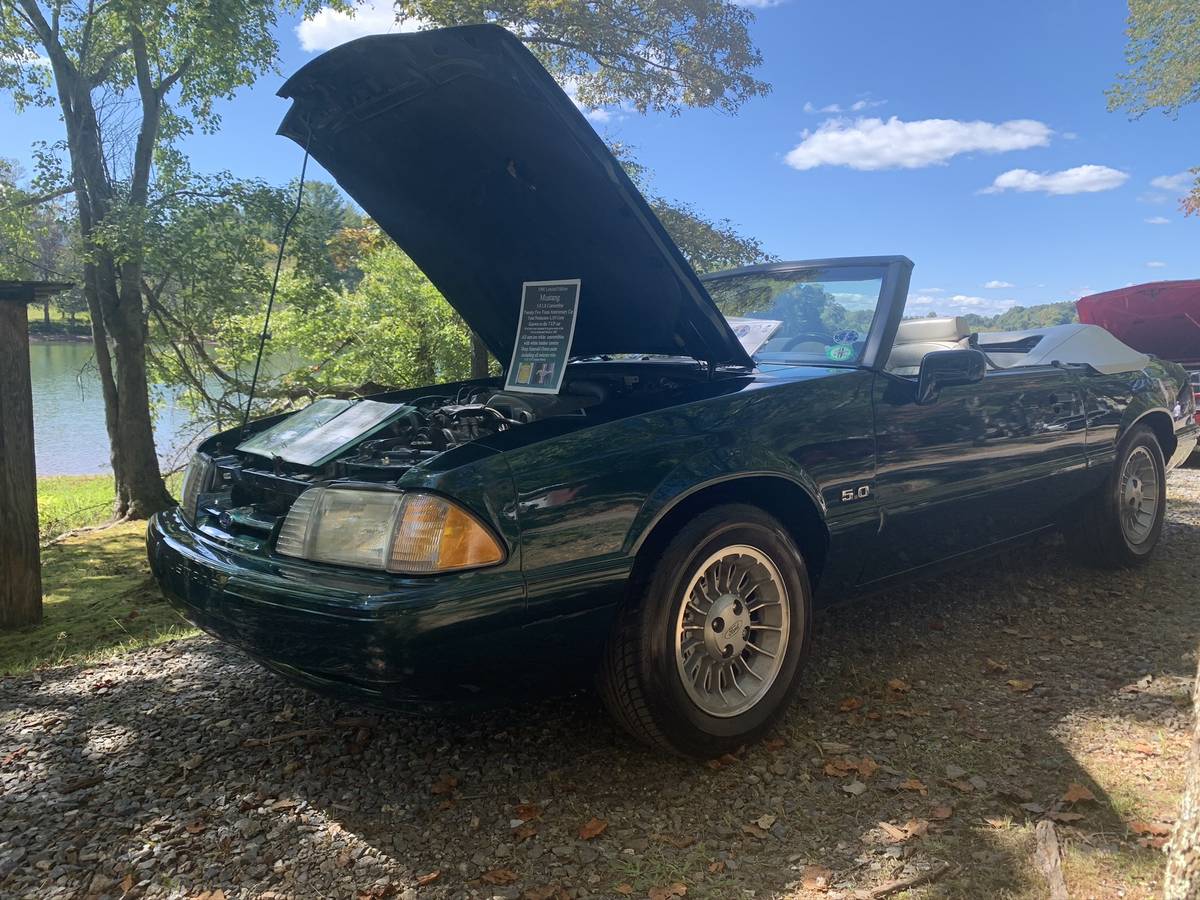 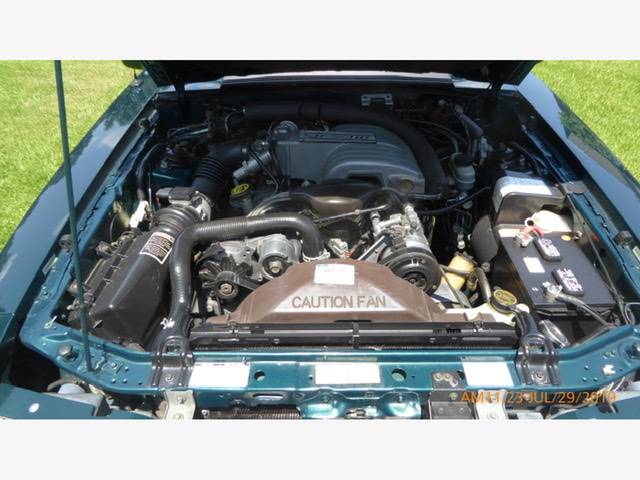 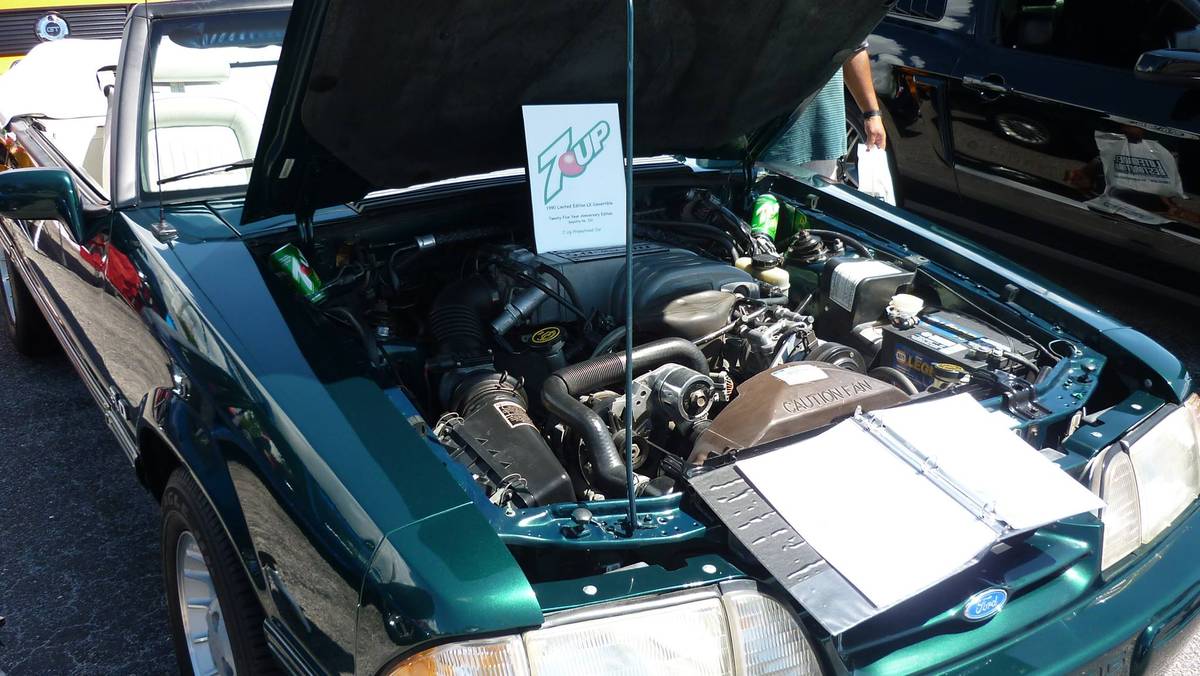 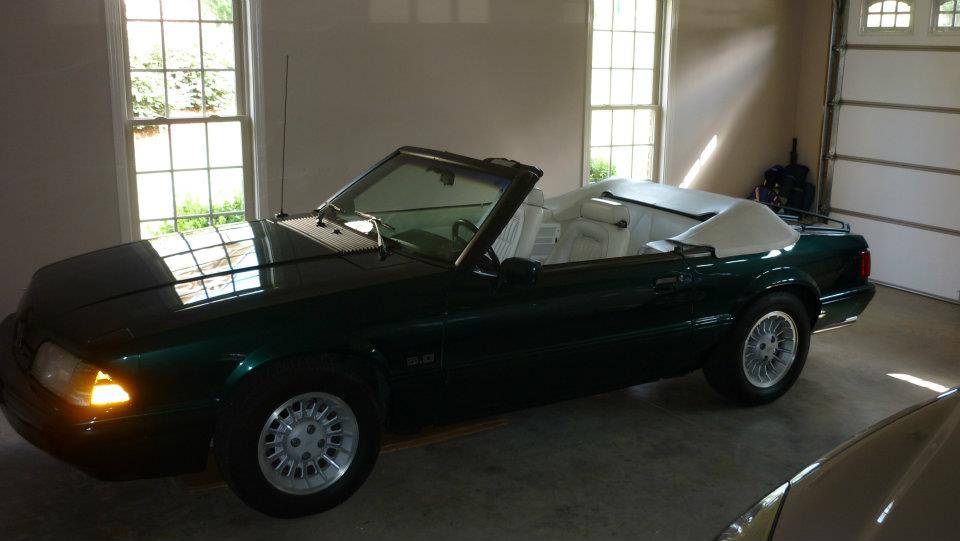 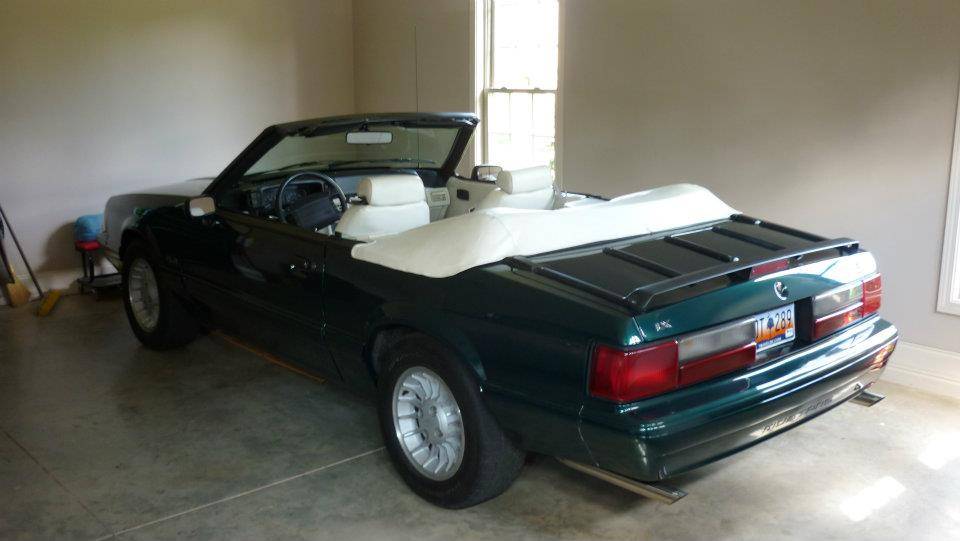 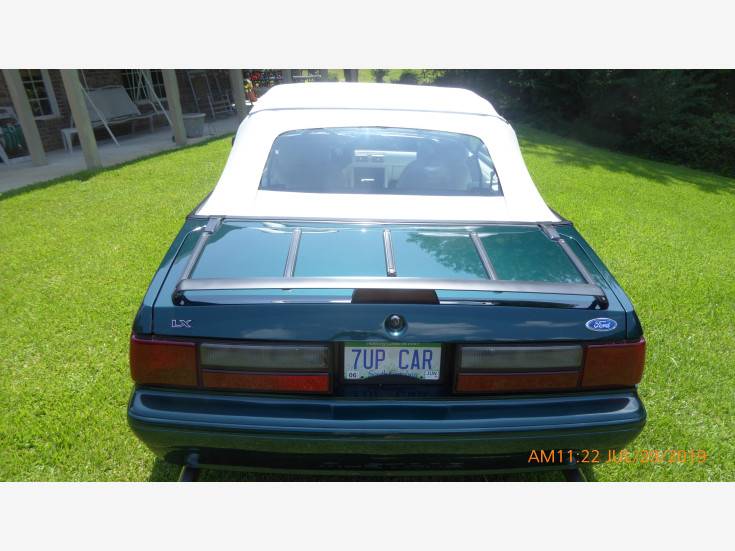 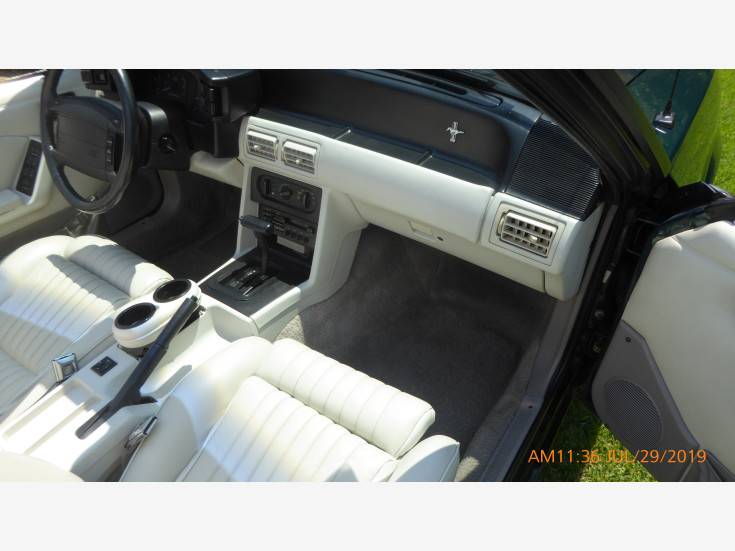 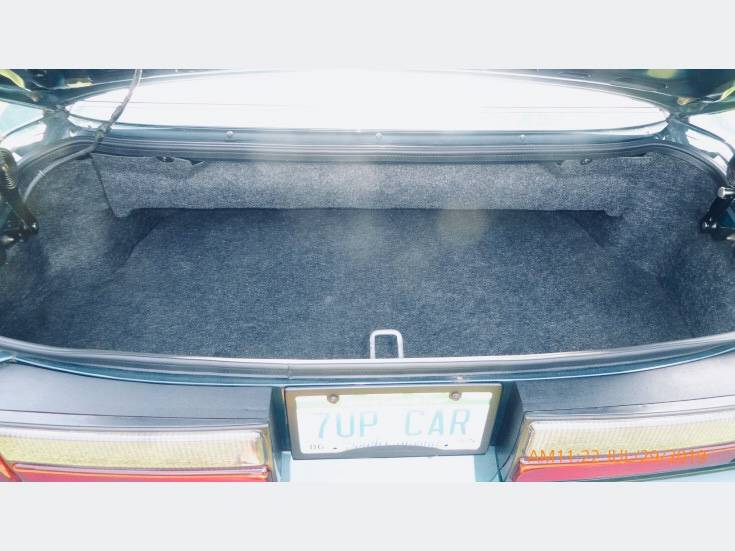 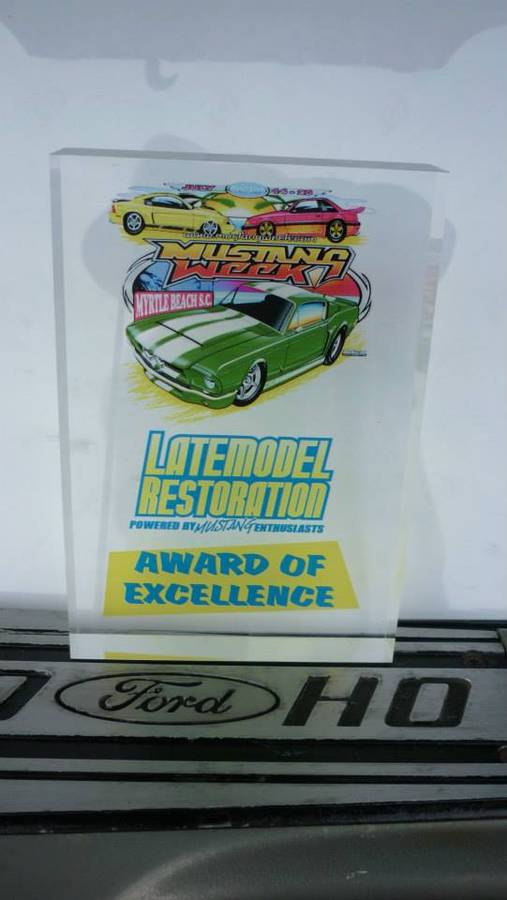 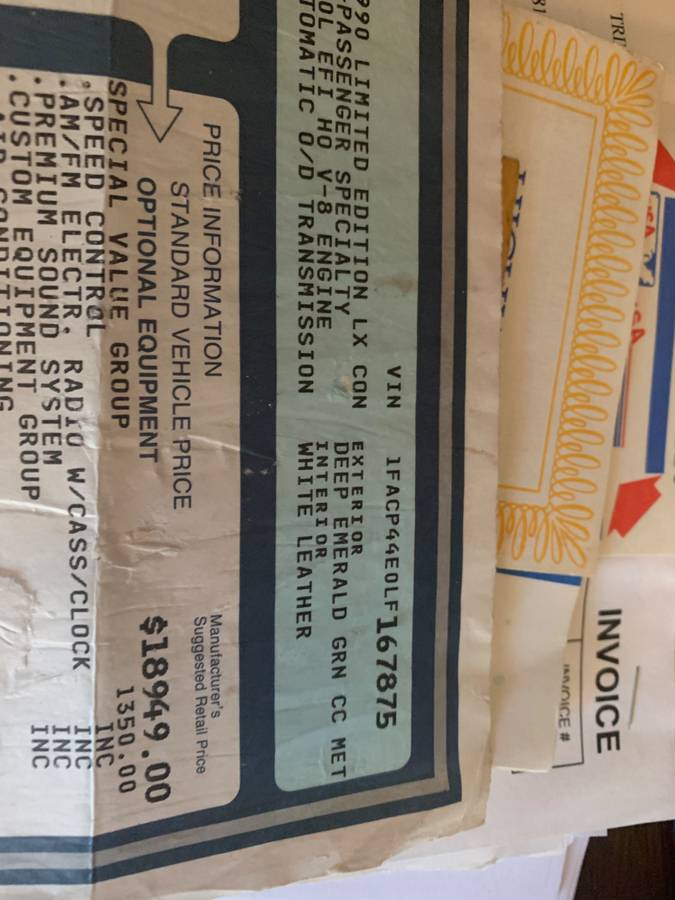 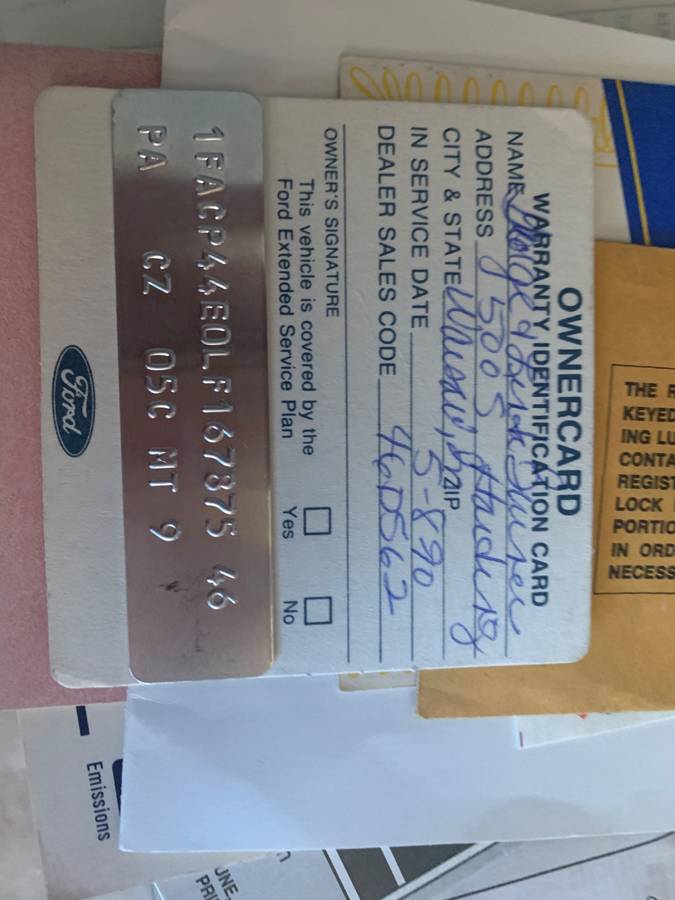 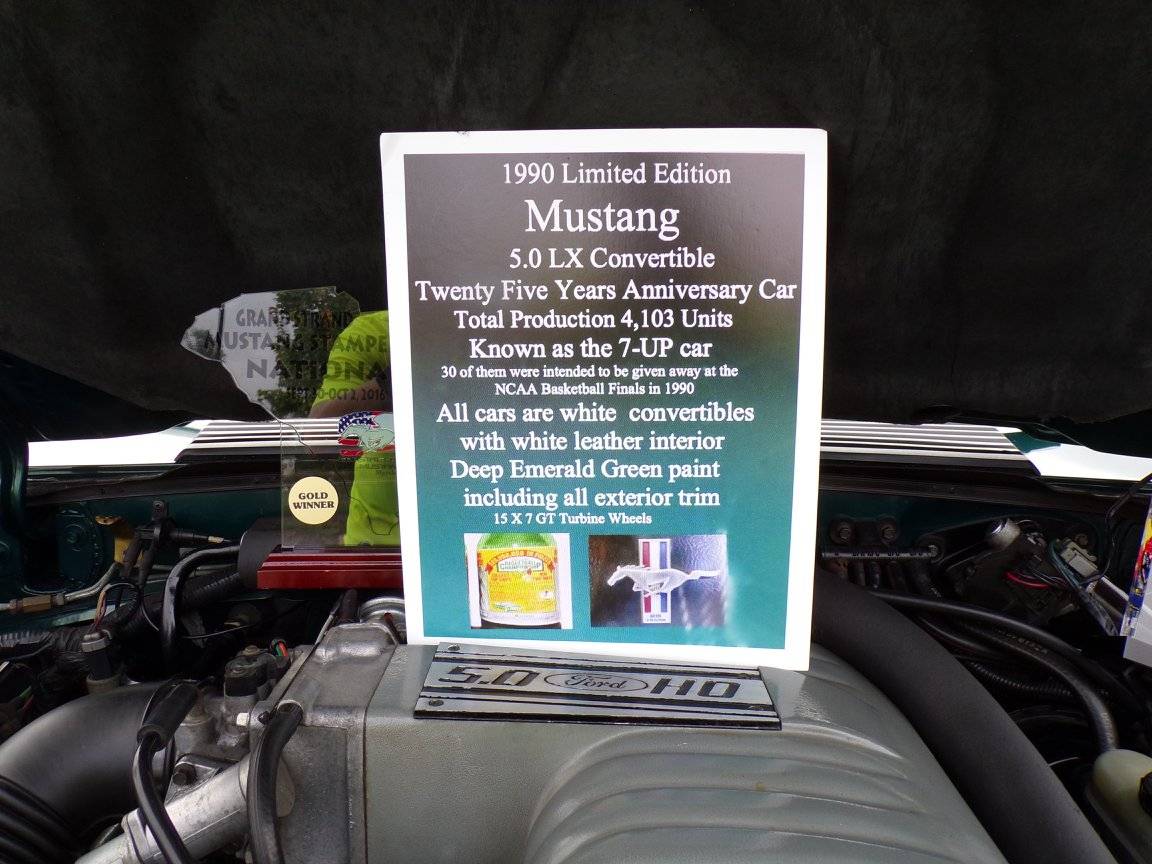 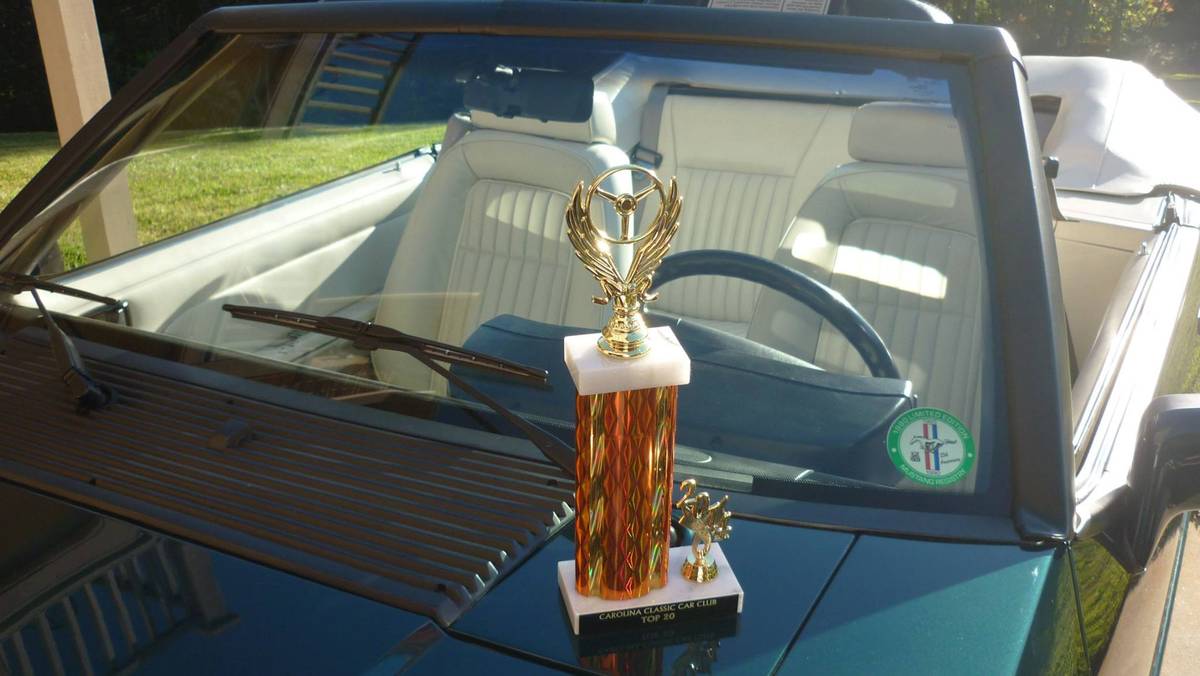 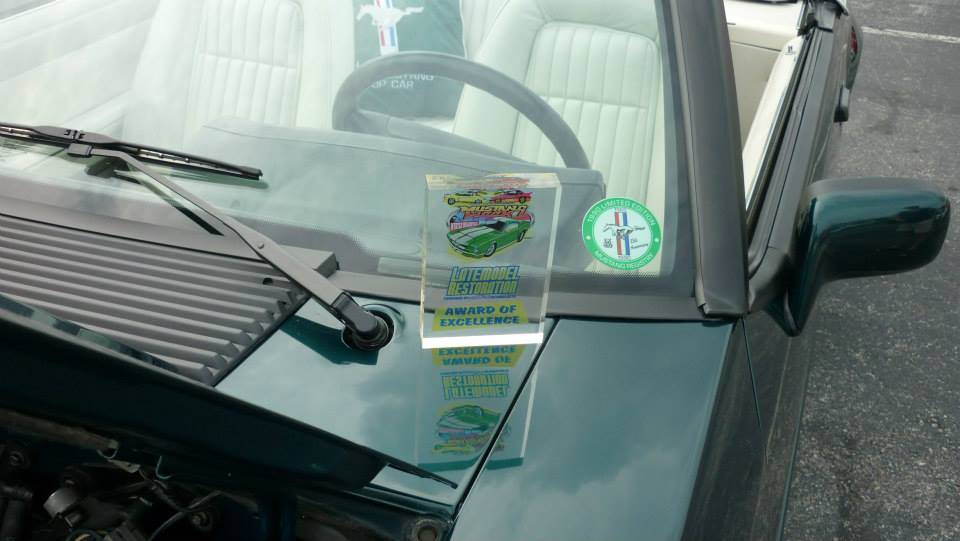 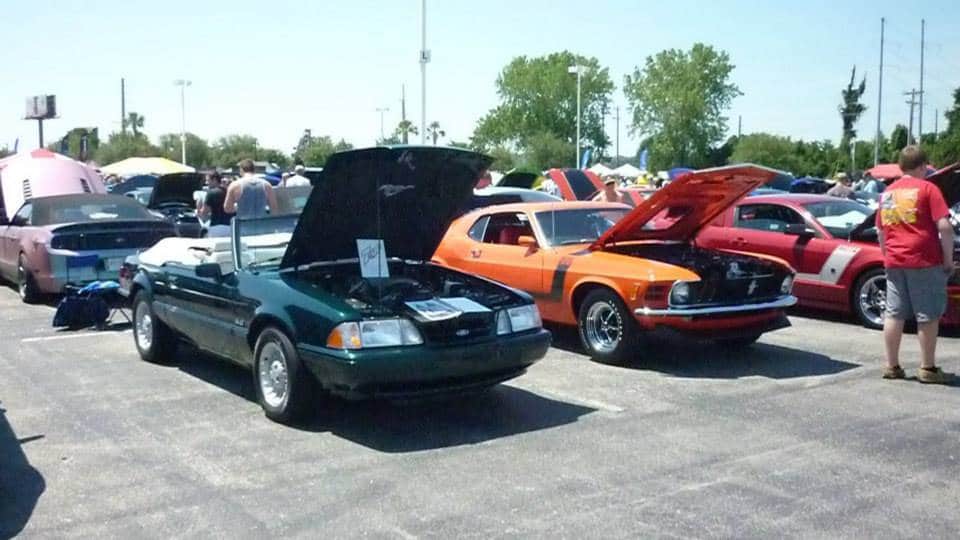 In the late eighties and early nineties, one of the popular colors of the period was emerald green metallic.  In our humble opinion, the best execution of the color was the striking 7-Up Edition, 1990 Ford Mustang LX 5.0L 25th Anniversary model such as the show quality example currently listed recently on Craigslist in Asheville, Noth Carolina with an asking price of $11,000.   Comparing this price against the Hagerty Insurance Online Valuation Tool confirms this private seller has his LX priced between the #3 “Good” appraisal of $11,600 and the #4 “Fair” (Daily Driver) estimate of $8,300.

In August 1986, the Mustang received a facelift for the 1987 model year on both the interior and exterior. The front end was restyled to look more like the SVO which gave the car more of an “Aero” look, in keeping with Ford’s overall modern styling direction. The interior received an all-new dash, center console, and revised seat and door trim. With the SVO discontinued, models were now pared down to LX and GT. Taillights on the LX were revised with clear lenses for the turn signals while the GT now wore specific body-colored triple louvered lenses. The quarter glass windows lost their louvers and now sported a single larger flush piece of glass lettered with “Mustang” at the bottom rear corners. GTs featured new round fog lamps and gained aerodynamic lower bodyside skirting and new turbine style 15-inch (380 mm) wheels. The 302 cu in (4.9 L) 5.0L Mustangs became popular with the aftermarket performance industry. The V6 option was discontinued while the 2.3 L four-cylinder gained fuel injection, leaving only the 2.3 L four-cylinder and the 302 cu in (4.9 L) V8 (The “5.0”).

For 1990, Mustang added a new steering wheel featuring an airbag and a revised lower driver-side dash panel with knee bolster. The available tilt-steering wheel, however, was discontinued in favor of the revised airbag-equipped steering column. A limited run of 5.0L equipped LX convertibles – all painted Emerald Green metallic with white convertible tops, Oxford White leather interiors featuring GT seats, and 15″ turbine alloy wheels – were produced for an NCAA half-court shot contest, sponsored by soda brand 7-Up, but the event was canceled shortly before it was scheduled to begin. Ford, already having produced 4,103 vehicles (2,743 with the AOD four-speed automatic overdrive, and 1,360 with the T-5 five-speed manual transmission), released them for dealer availability. Revamped interior quarter panels for the 1990 model year did away with the side armrests for rear-seat passengers but gained large speaker panels for improved sound quality for the stereo. Door map pockets and clear coat paint also became standard for the 1990 Mustang, along with the availability of optional leather interior trim.

Here’s a MotorWeek Retro Review of the virtually identical, although slightly heavier GT model from 1988:

We have always been fans for these emerald green over white leather Mustangs since they were new, especially since they were based on the cleaner-looking and lighter LX body that has aged much better than the body-clad GT versions.  Good luck with the purchase!

“This 1990 Limited Edition Ford Mustang 5.0 LX 7-UP convertible is the beautiful and wonderful shape. The convertible top Is in awesome condition and works perfectly. The 5.0 engine compartment is clean and well taken care of with all stickers in place. Parade boot looks great and is still stored in its original bag. This 7-UP Mustang is equipped with an automatic transmission. Original Window Sticker and other original paperwork add to cars provenance. It is a blast to drive as well as highly collectible. This particular car has been shown in several shows and is always a winner. It also has been shown in MCA Shows in concourse driven and always gets a gold. It was family-owned since the day it was first purchased. All paperwork comes with car. I am technically the second owner. Everything works as it should. Nice cold ac, warm heat, all lights, dash, radio, seats, power door locks, etc.

All 7-UP Mustangs came in Emerald Green with a white top, white leather interior, and Sport Seats. On the exterior, the Emerald Green paint extends to the body side moldings and the dual remote outside mirrors. The Limited Edition also came with 16 spoke, cast aluminum GT wheels. (The only LX to receive GT wheels).

These cars have been commonly known as the 7-UP cars. The 7-UP Bottling Company was to give away thirty of these cars at the 1990 NCAA Final Four. In an audience participation contest, anyone sinking a basket from center court with one try, was to drive home in one of these cars. At the last minute, the contest was cancelled.

The 7-UP car is also thought to have been the 25th Anniversary car- although there is no evidence of this. All Emerald Green limited editions did come with the “25 Years” dash badge. This is because the cars were produced within the window of ( March ‘89- April ‘90) designated by Ford for all Mustangs to include the emblem on the passenger side dash.

This Limited Edition 7-UP Mustang is one of the most desirable Fox Body cars ever built and one of most sought after Mustangs to come out of Dearborn in the last 40 years. There were 4993, 1993 SVT Cobras built just to put the rarity of this car in perspective.“