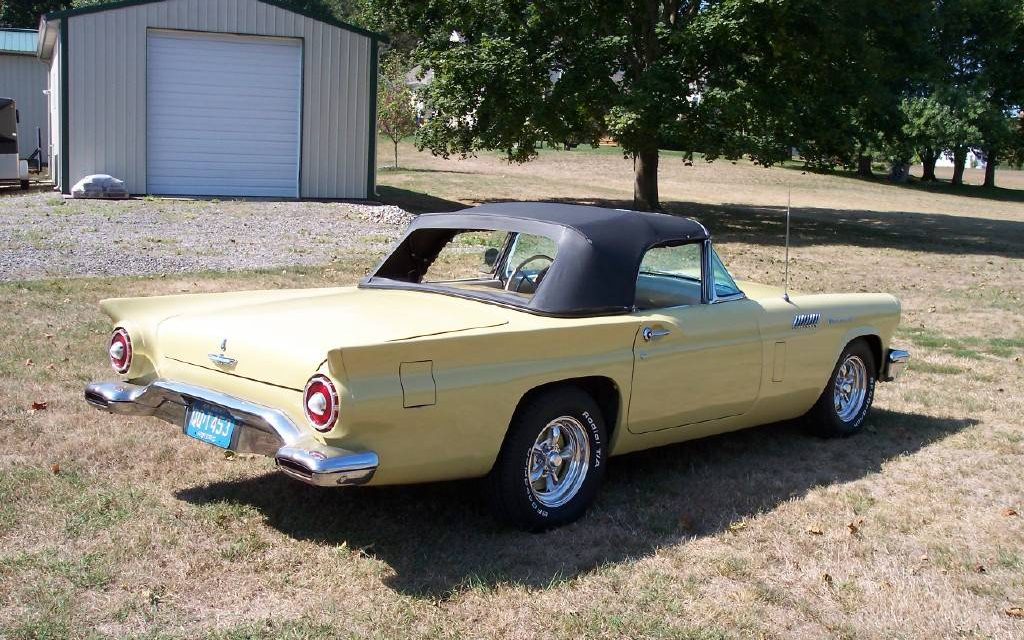 November 10th Update – Nope, we were fooled again.  Just when we thought the private seller of this T-Bird finally sold their car based on the deletion of their latest Craigslist ad, he proves us wrong again with a fresh listing with the asking price once again set randomly at $26,500.

October 28th, 2020 Update – Could it be the long-time owner of this ’57 Thunderbird survivor finally found a buyer willing to pay his price?  While the seller has deleted his most recent ad, we’ve seen him behave similarly before.  So for now we’re going to call this one “Sold!”  but will always have our eye out for a fresh listing.

September 30th, 2020 Update – Some nineteen months after we originally featured this Thunderbird in March 2019, we came across yet another new listing after the current caretaker dating back to 1966 likely decided to keep the car for one more summer.  With the knowledge of all of the history documented below combined with the fact this owner likely wants the car gone once and for all before winter, we stand by our assertion a $20,000 offer will likely take this T-Bird home.

February 27, 2020 Update: Nearly one year later since we first featured this 1957 Thunderbird owned by the same caretaker for the past 54 years last March 13th, we just noticed yet another fresh post of this ’57 Inca Gold-over-White Thunderbird just posted a fresh Craigslist ad (we updated the link below) and he’s kept his asking price at $25,000 or best offer.  While the post is fresh, the pictures are now at least one year old, so you’ll need to confirm the mileage driven in the past twelve months as well as what work, if any, has been completed.  With the knowledge the private seller has been trying to sell his T-Bird for the past year combined with the fact we continue to stand by our assertion an offer of $20K has a shot of taking this car home.  Good luck with the purchase!

January 2nd, 2020 Update: The same caretaker for the past 53 years of this ’57 Inca Gold-over-White Thunderbird just posted a fresh Craigslist ad (we updated the link below) where he’s lowered his asking price another $2,000 to $25,000 or best offer.  With the knowledge the private seller has been trying sell his T-Bird for the better part of one year (we first featured this car on March 13th last year!), we stand by our assertion an offer of $20K has a shot of taking this survivor quality car home.  Good luck with the purchase!

October 10th Update: The same caretaker for the past 53 years of this ’57 Inca Gold-over-White Thunderbird just posted a fresh Craigslist ad yesterday (we updated the link below) where he’s still asking $27,000 or best offer for his car.  With winter on its way and his T-Bird offered for sale at least seven months that we’re aware of, we’re curious to see what “Best Offer” will get this T-Bird sold.  After seeing a similar driver quality triple white ’56 with an asking price of only $18,000 yesterday at the Hershey Car Corral, we suspect an offer of $20,000 might stick on this car.

July 29 Update:  We originally featured this driver-quality ’57 Thunderbird on March 13th as part of “Topless Thursday” that day.  At the time the owner hoped to get $32,500 however, we just noticed he reposted his T-Bird for $5,500 less that now stands at $27,000.  We’ve updated the link and Hagerty Insurance valuation, however, this is further proof the mid-fifties T-Bird prices continue to soften as there too many still left for a dwindling pool of hobbyists interested in owning one.

For many years, 1955-1957 two-seat Thunderbirds were among the strongest priced classic cars in the hobby. A general softening in the interest of 50s-era cars combined with an aging owner base is allowing driver-quality examples such as this one much to become more affordable. A prime example is the Inca Gold-over-White ’57 example presented here. This car has been under the care and ownership of the same person since 1966 originally listed in March 2019 on Craigslist in North Brunswick, New Jersey for the revised asking price of $26,500 or best offer. Based on the Hagerty Insurance Online Valuation Tool, the owner has his car value-priced $6,400 below the #4 “Fair” condition value.

The long-term owner states that his T-Bird is “as rust-free an unrestored car that you will find.” While the exterior photos provided support that, we recommend thoroughly looking at the undercarriage and under the trunk mat to confirm the solidity of the car. Based on the pictures the paint is presentable but you’ll have to confirm with the owner whether his car ever received a repaint. The car’s data plate will have “Y” as the paint code if it came from the factory in this hue.

This T-Bird also features the desirable “D” Code 245 horsepower, 312 cubic inch V8 equipped with a four barrel carburetor sending power through a floor-shifted three-speed Cruise-O-Matic automatic transmission. The engine compartment could use a nice detailing, but that’s a project to save for next winter.

A fun fact about these early T-Birds: Ford’s saavy marketing arm made the hardtop standard while the convertible top was optional. As expected, most buyers ended up opting for the two-tops. This example comes equipped with a black canvas soft top and a white porthole-equipped hard top. You’ll need to confirm the condition of the plastic rear window in the convertible top.

We love that the sale includes both the vintage Cragar SS wheels as well as the stock wheels. Its unclear whether the stock wheels need restoration and/or new tires. As the seller states, this is a great driver-quality Thunderbird you can enjoy all summer long. Good luck with the sale!