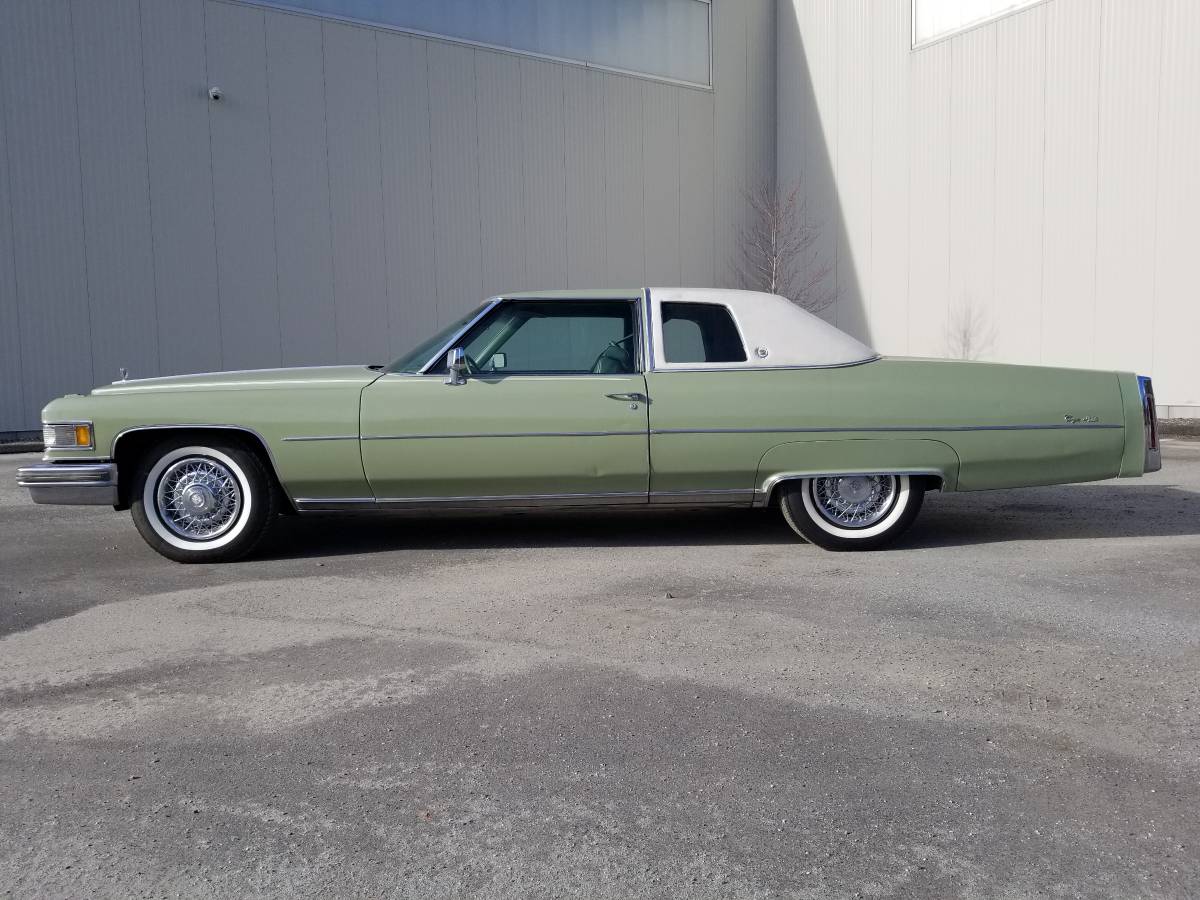 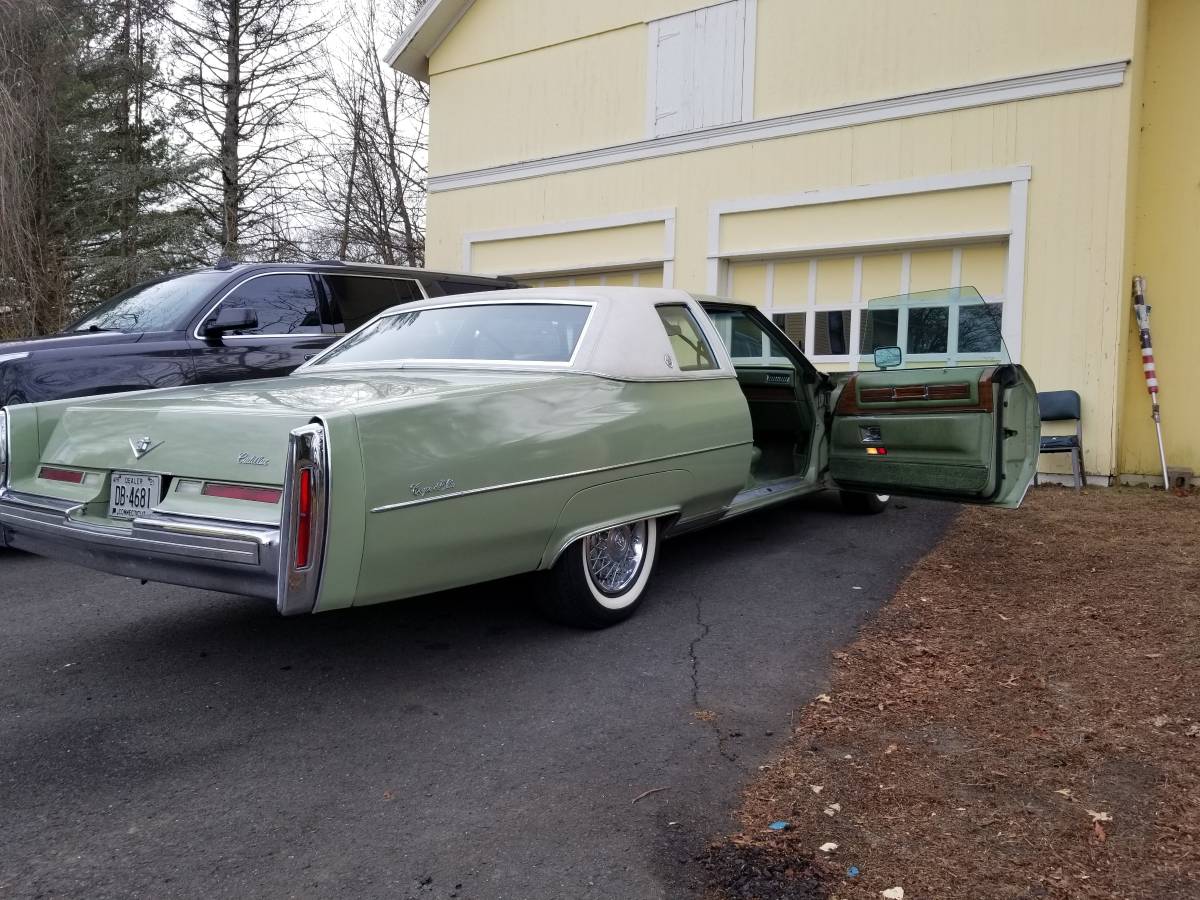 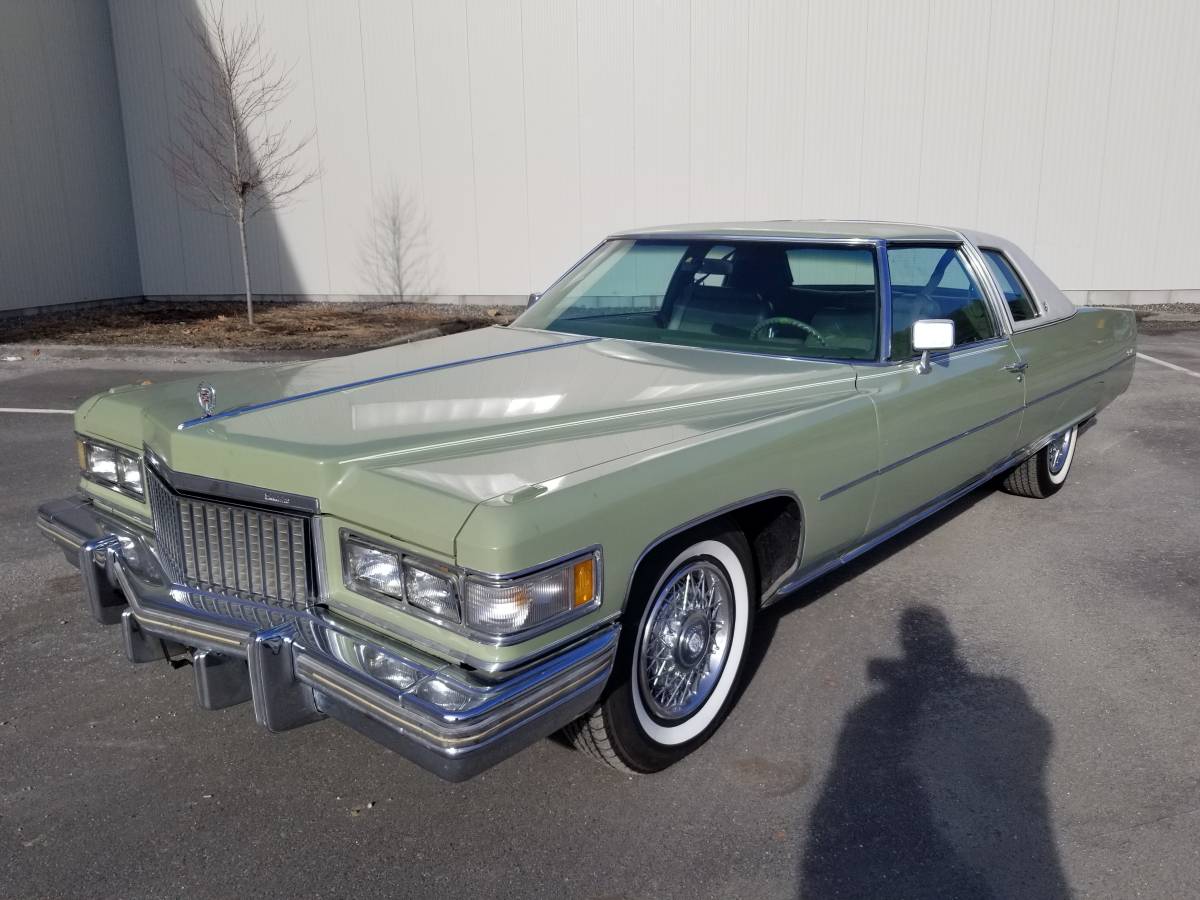 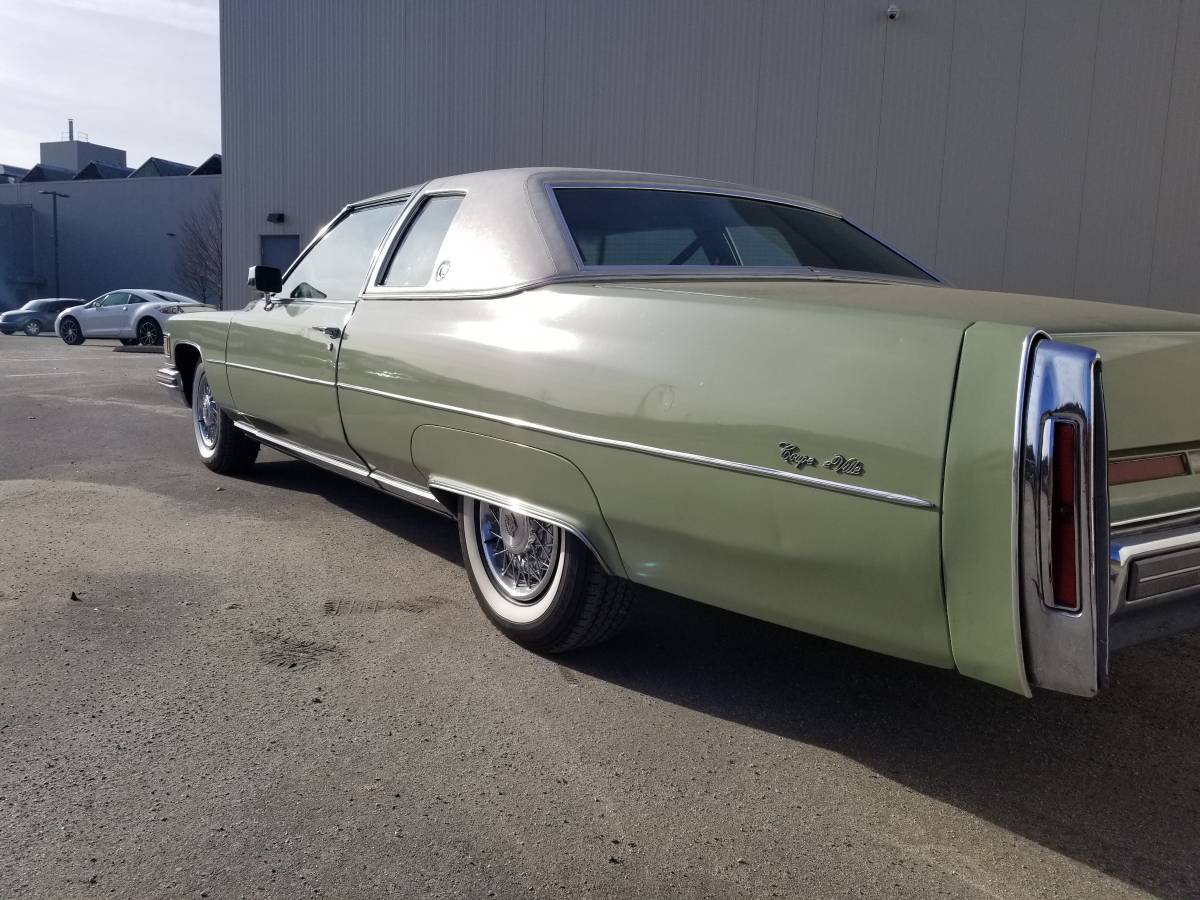 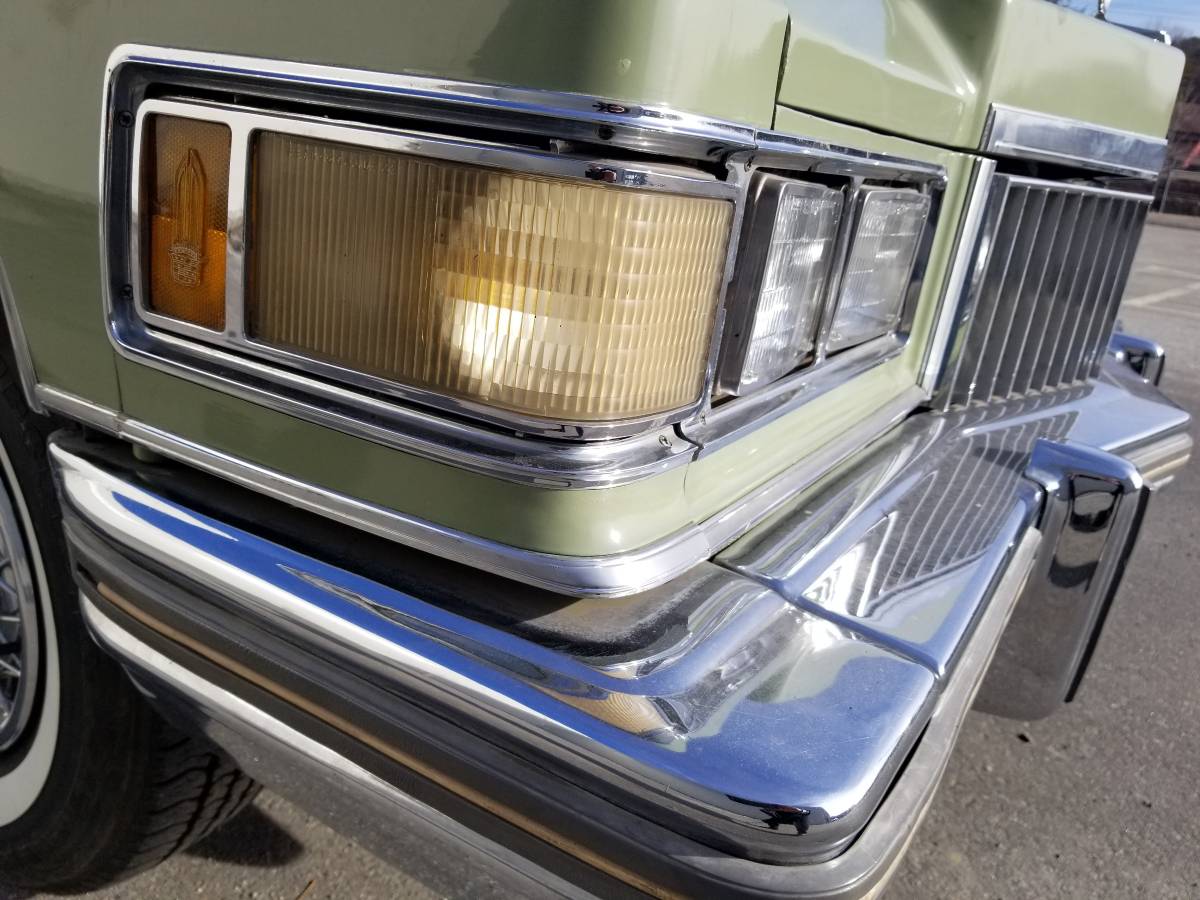 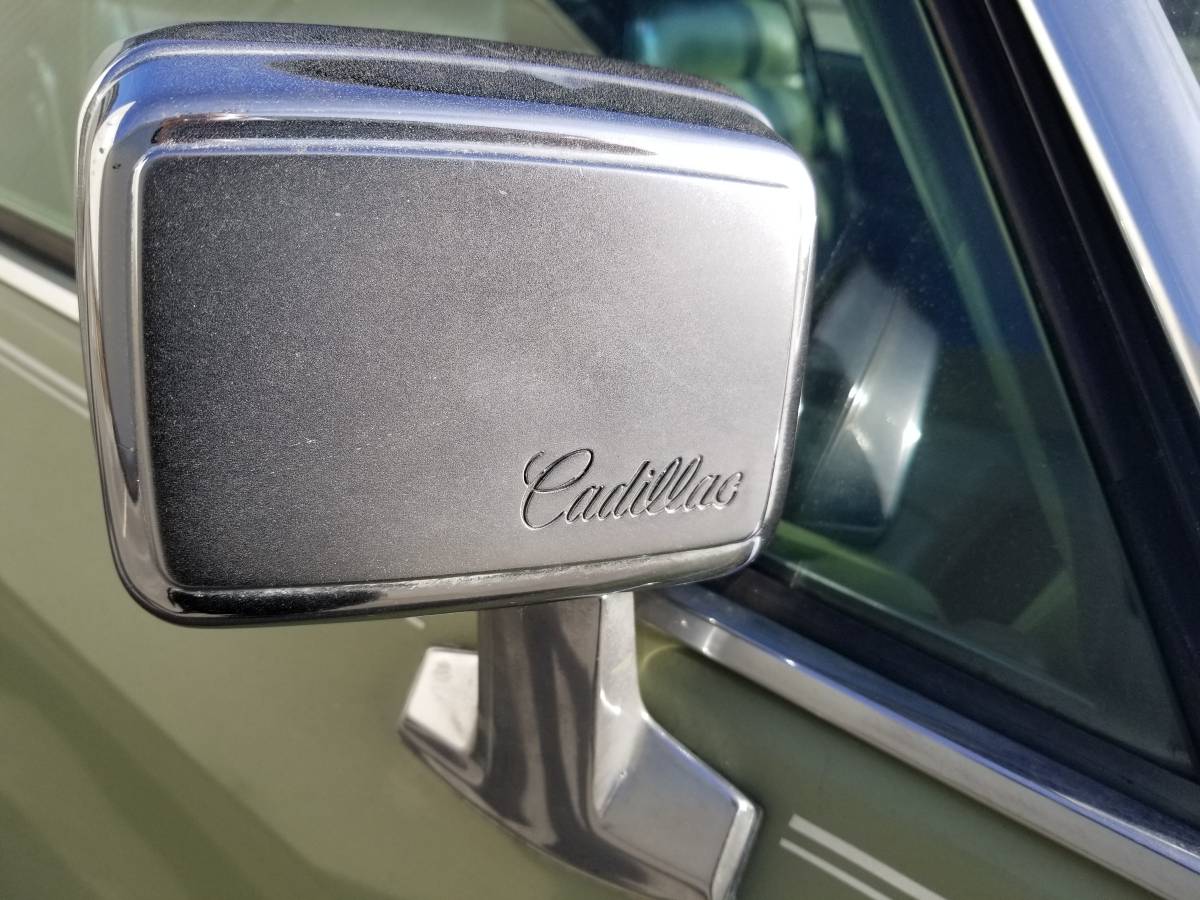 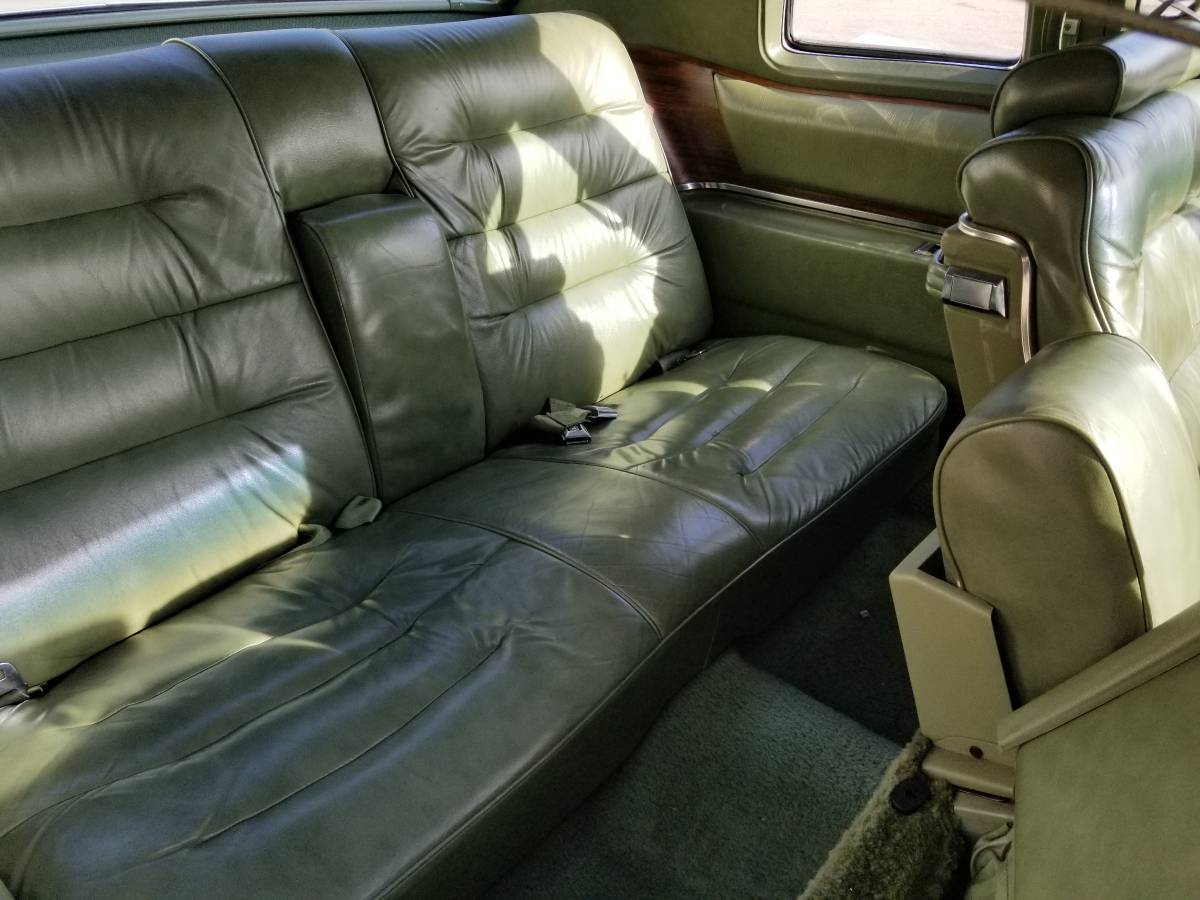 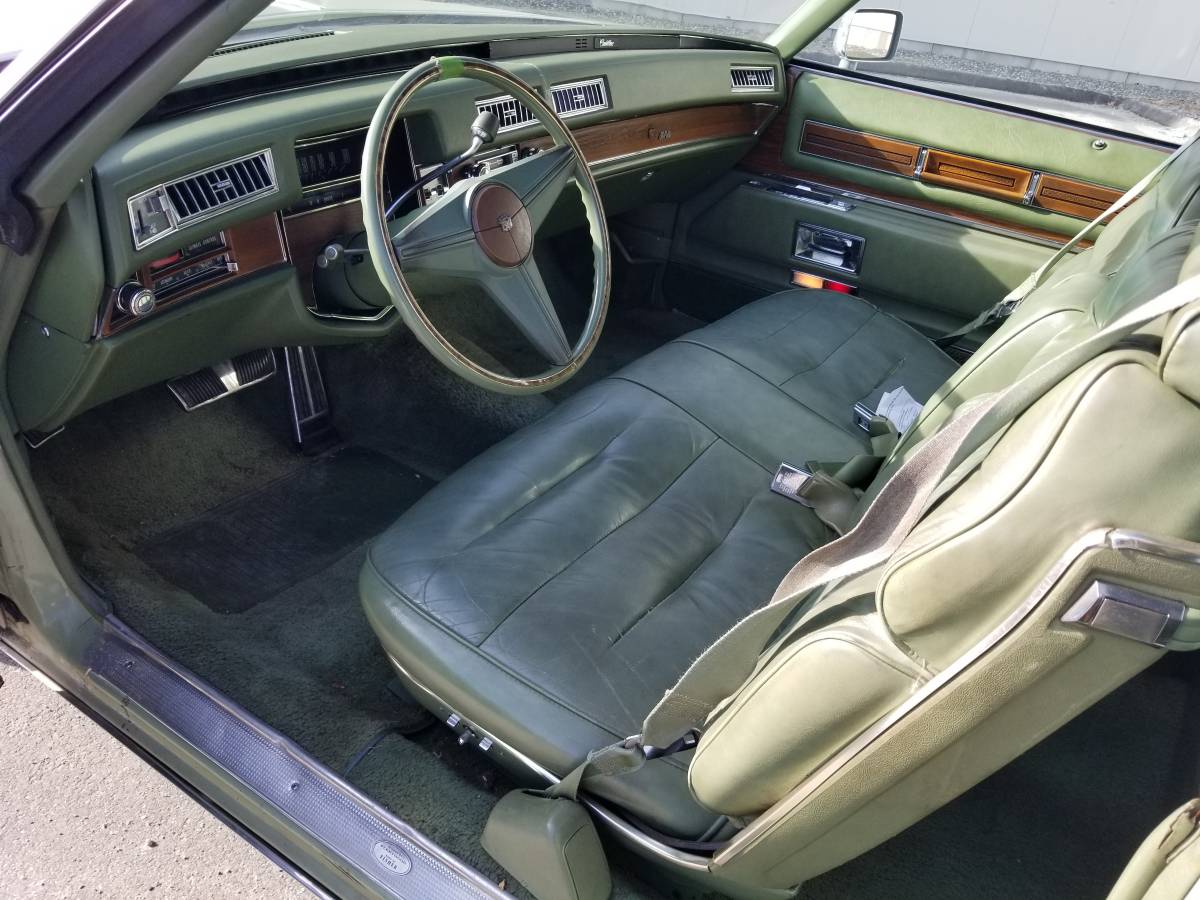 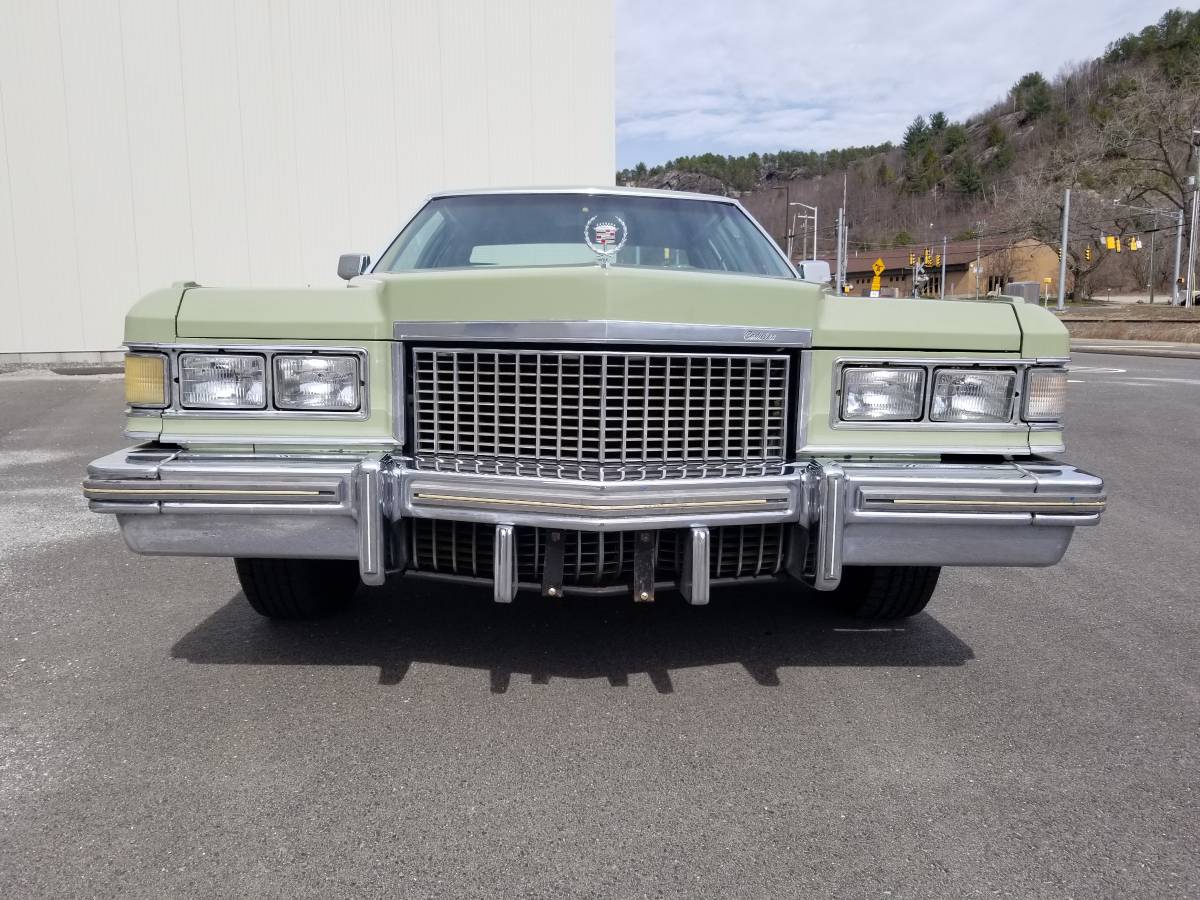 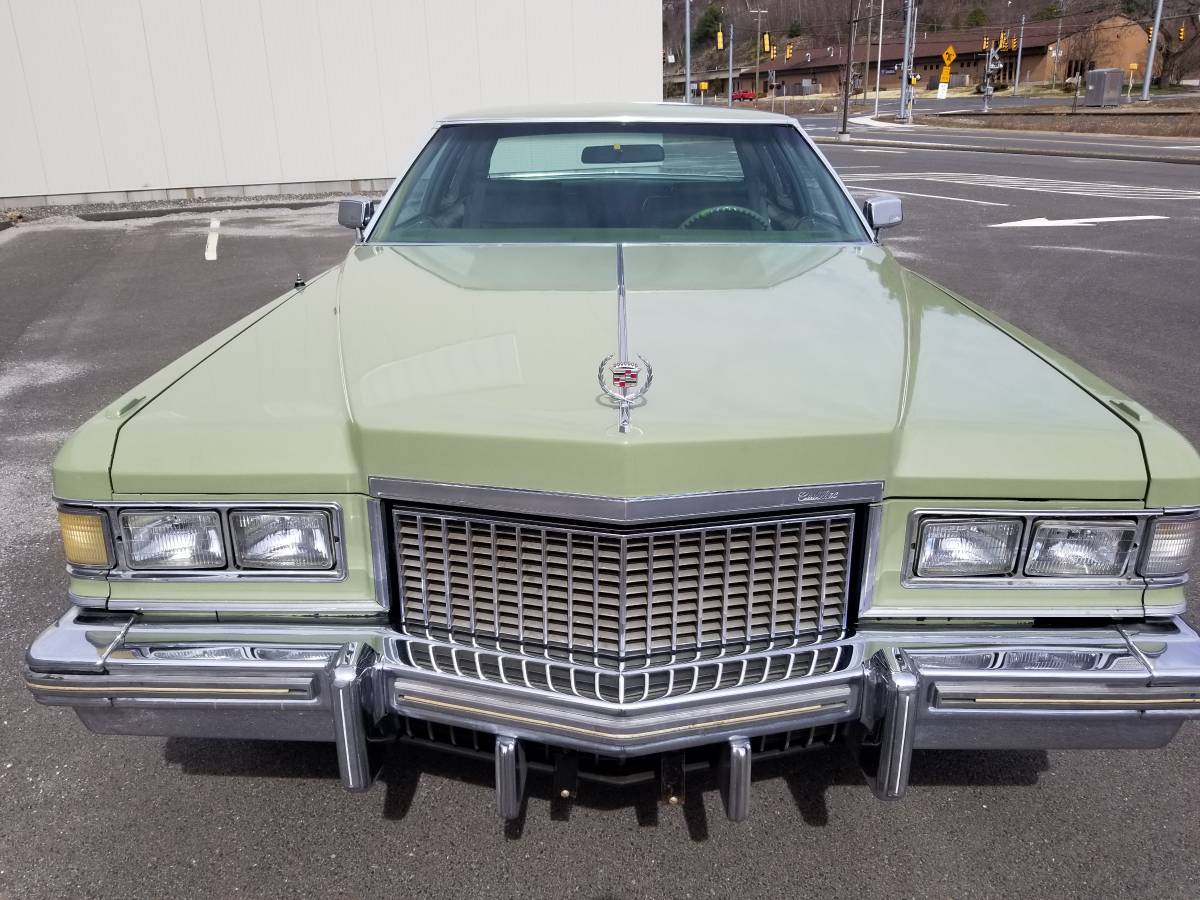 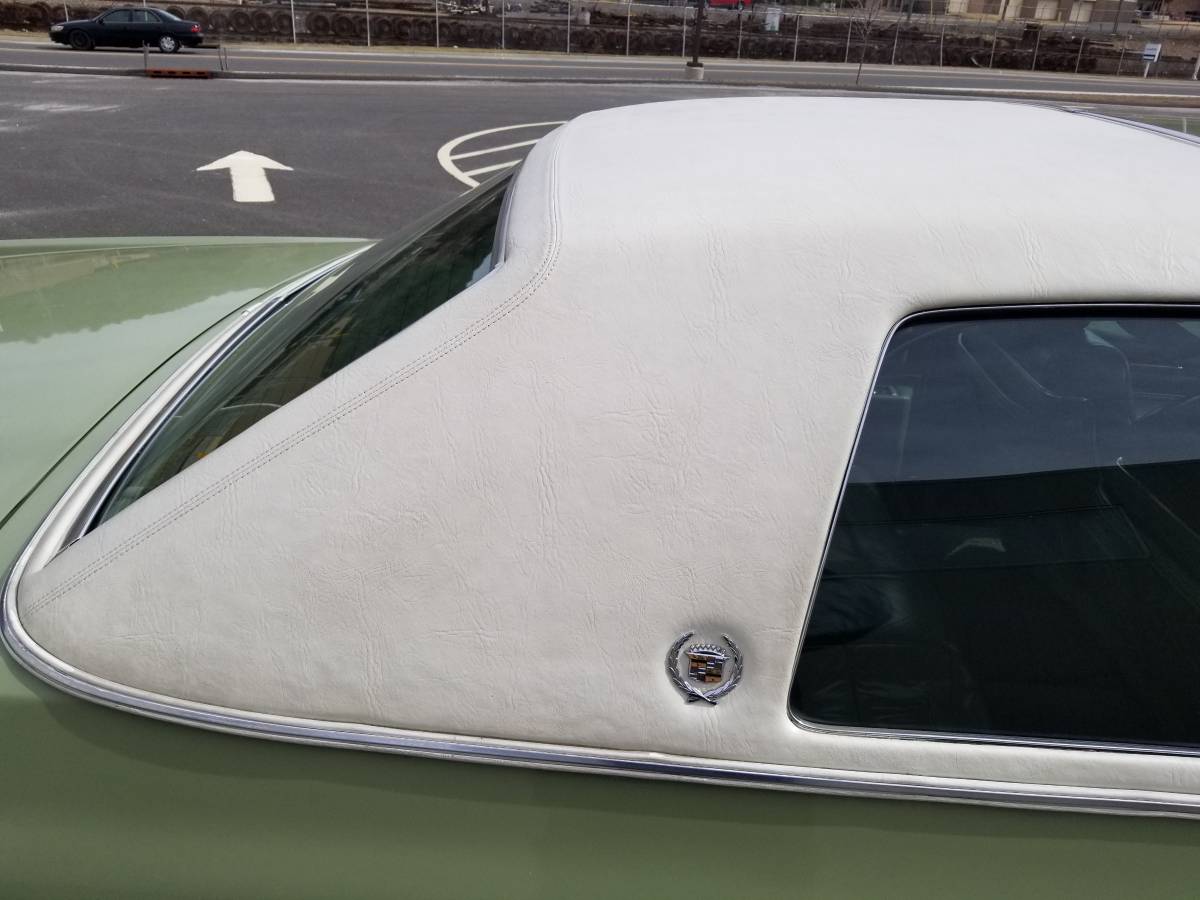 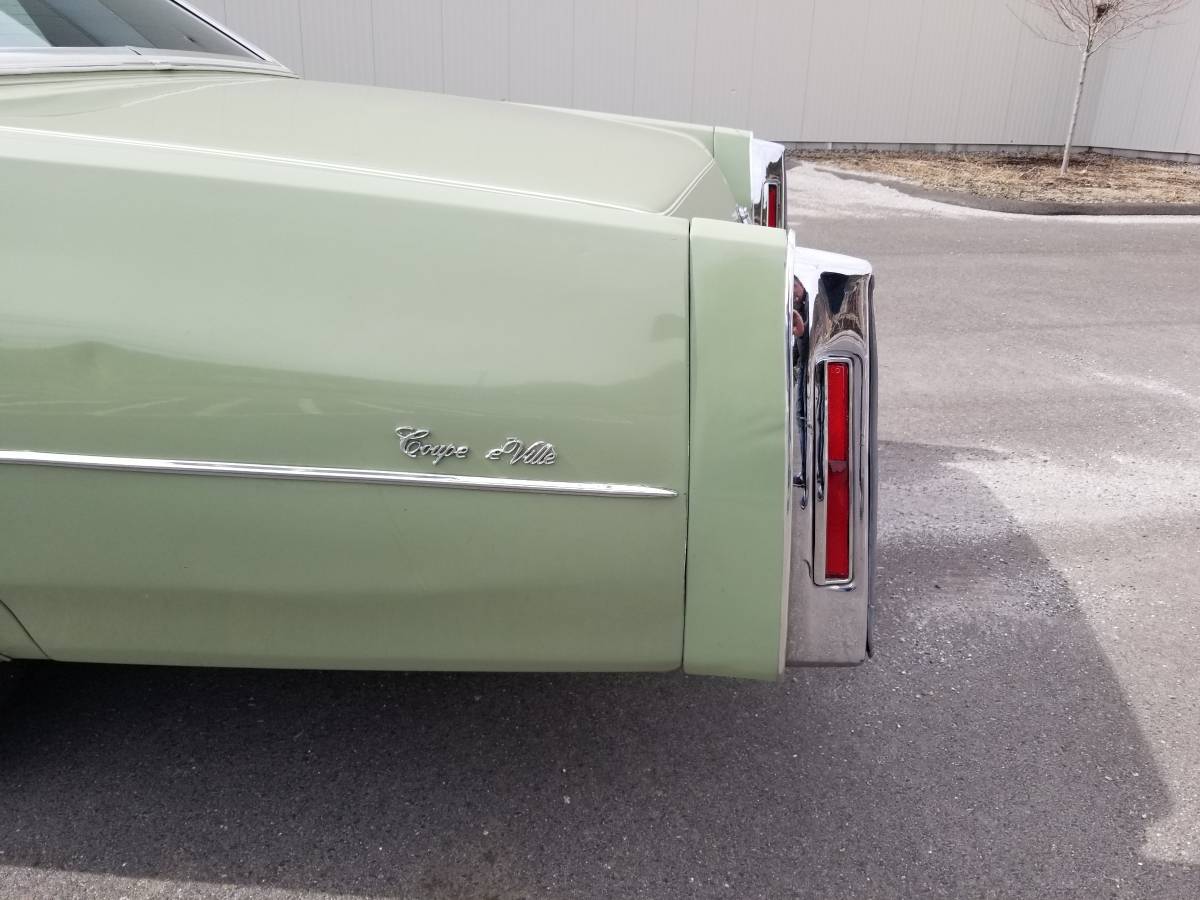 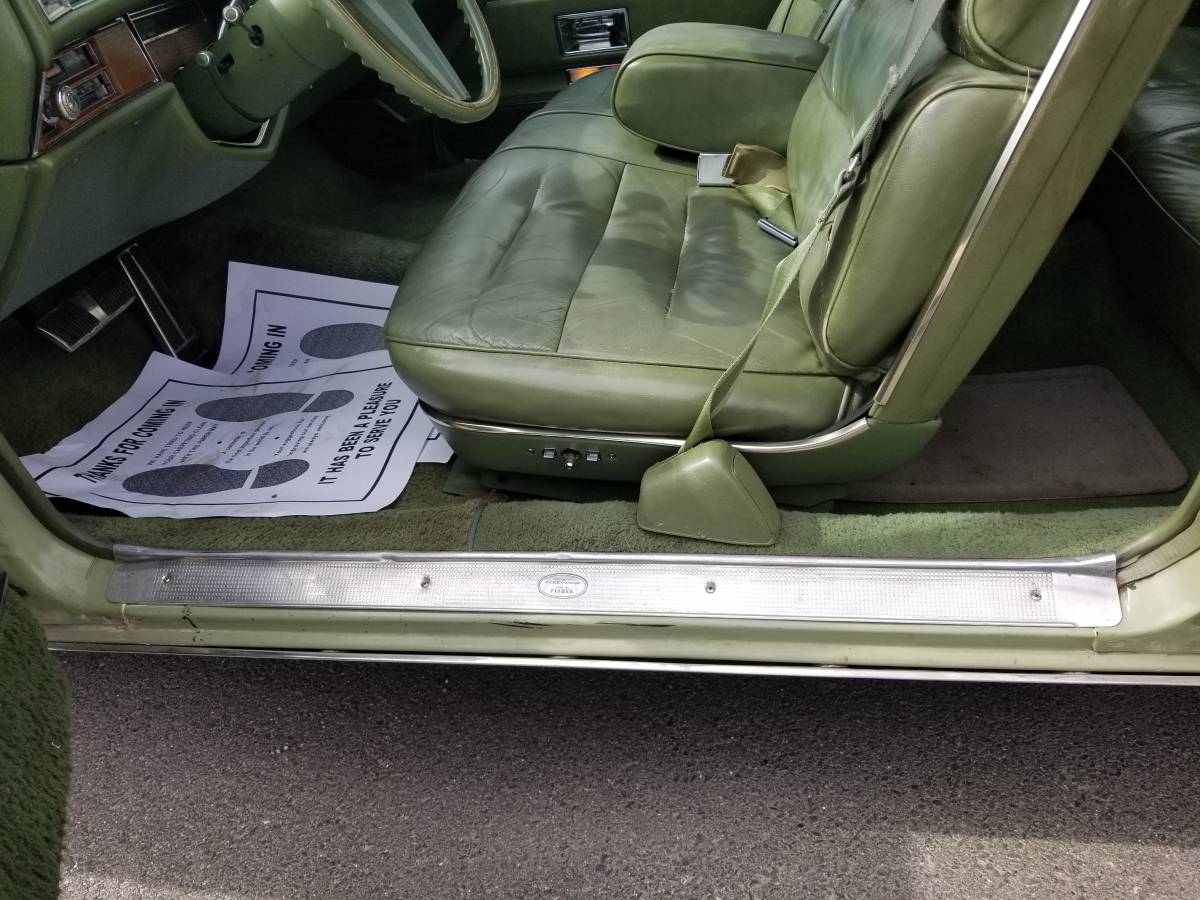 November 15th Update – Preparing for Malaise Monday found us coming across a fresh listing for this ’75 Coupe DeVille with the asking price lowered $1,000 to $9,500.  The pictures and description provided remain the same.

By 1975 the U.S. Arab oil embargo caught the U.S. auto industry by surprise and gas guzzlers such as this 500 cubic-inch powered Cadillac Coupe DeVille originally listed in November 2020 on Craigslist in Waterbury, Connecticut quickly fell out of favor.  This 85K original mile driver quality example said to have one repaint represents one of the last great American land yachts.  Currently offered at a reduced $9,500 (down from the original ask of $10,500), researching the Collector Car Market Review Online Tool reveals the private seller has their Coupe DeVille priced between this guide’s #2 “Very Good” appraisal of $9,375 and its #1 “Excellent” estimate of $14,225.  Similarly, using the Hagerty Insurance Online Valuation Tool as a second data point confirms this private seller has his Caddy priced between the #3 “Good” appraisal of $10,700 and the #4 “Fair” (Daily Driver) estimate of $6,200.

Here is Hagerty Insurance’s take on the 1971-1976 Cadillac DeVille line:

“Cadillac redesigned its entire line in 1971, softening the outline and lowering and lengthening the remaining nine models in the lineup. The pillared four-door sedan was replaced by a four-door hardtop in the Sedan de Ville and new Calais line, while the Fleetwood Sixty Special and long-wheelbase Fleetwood Seventy Five retained central pillars. The only convertible offered was now in the redesigned front-wheel-drive Eldorado.

The Calais and DeVille rode on a new 130-inch wheelbase, the Fleetwood Sixty Special was 133 inches long and the nine-passenger Seventy Five was stretched to 151.5 inches. The Fleetwood Seventy Five was now a massive 20-feet long. Chassis were strengthened and the 472-cubic inch V8 was now standard, except for the Fleetwood which used a 500-cubic inch V-8. By cutting down the front and rear fenders and carrying the hood line through to the rear the new cars were lower and more elegant than their predecessors.

A three-month strike at GM began just when the new models were introduced and new cars didn’t start reaching customers until early 1971. As a result production of the DeVille models fell from 181,719 to 135,426 divided almost 50/50 between Coupe and Sedan de Villes, almost all with vinyl roofs. The lower level Calais model attracted only 6,929 buyers, evenly split between coupes and sedans and lacking vinyl tops. The 1971 Sedan de Ville was the most popular luxury car in the world, but reduced compression ratios cut the power drastically.

In 1972 Cadillac celebrated its 70th anniversary with minor changes, following the two-year plan. The big square grille was still protected by over-riders, but grille bars were now horizontal instead of squared. Bumpers were now beefed up to withstand 5-mph impacts. In common with other U.S. manufacturers, Cadillac now rated cars by net horsepower and the 472 cubic inch V-8 was rated at only 220 bhp. All Cadillacs included a full range of power options and air conditioning, with leather or brocade interior. Sales totaled 194,811 units. Once again, the largely identical low-line Calais attracted far fewer, with only 7,775 buyers.

Bumper regulations hit home in 1973, along with the gas crisis, and the new Cadillacs boasted massive 10 mph front bumpers that were attached to the grille. The grille and bumper were mounted on pistons which could retract several inches. Fragile rubber strips separated the bumpers from the body. Cadillac delivered its five millionth car on June 27 – a blue sedan de Ville, and a total of 216,243 DeVilles were sold, with the coupe outselling the sedan for the first time.

By 1974 the gas scare had passed and buyers were back buying big cars. The Cadillac DeVilles had grown longer with even bigger energy-absorbing bumpers. Airbags were offered as an option for the first time, a high energy ignition system was fitted and the instrument panel redesigned. Coupe de Villes now had a fixed rear side window, similar to the Eldorado coupe. Glitzy Cabriolet and d’Elegance packages were offered, the latter with a velour interior and deep pile carpet, and it was possible to combine both. Coupe de Villes now outsold the sedans two-to-one with 112,201 coupes to 60,419 sedans, while Calais sales skidded to 6,773, with the same proportion of coupes and sedans.

In 1975, rumors of a new small Cadillac came to fruition in the mid-year Seville, based on the Chevrolet Nova platform. Electronic fuel injection was optional and all Cadillac models gained square headlights. The DeVille and Calais four-doors received a third window in the C-pillar. The egg-crate grilles were now much finer. Moon roofs were now offered and side “cornering” lamps fitted to front fenders. The year was marked by a significant recession and DeVille sales dropped to 173,570, while Calais sales rose slightly to 8,300. Coupes outsold sedans two-to-one in both cases.”

We came across this individual’s interesting take on owning a classic car that happens to be the same year, make, and model as the Coupe DeVille we’re featuring here:

If you’re looking for a classic, driver-quality land-yacht size Cadillac and have a garage deep enough to fit it over 19-foot length, this appears to be a great example to consider. Good luck with the purchase!

“Original matching numbers Cadillac Coupe de Ville with Landau roof and straight, straight body. 500 c.i. matching numbers V8 Had had one repaint and is decent not perfect. Car is ready to be driven anywhere, starts everytime. 85000 original miles. This car has been well maintained by its previous owner. Tires are excellent, brakes are excellent. Interior is beautiful and green leather was well taken care of. This car must have been garaged for most of its life because the frame and floors are amazing. Recent exhaust with straight pipe (no more catalytic converter) Car sounds great and really cruises down the road. Recent install of refurbished original factory AM/FM Radio/8 track. Glass is all clean. Contact Jim to schedule a time to come see the car and take it for a test drive. $11,995.00 o/b/o. Text 203-605-0346. Clear Connecticut Title.“