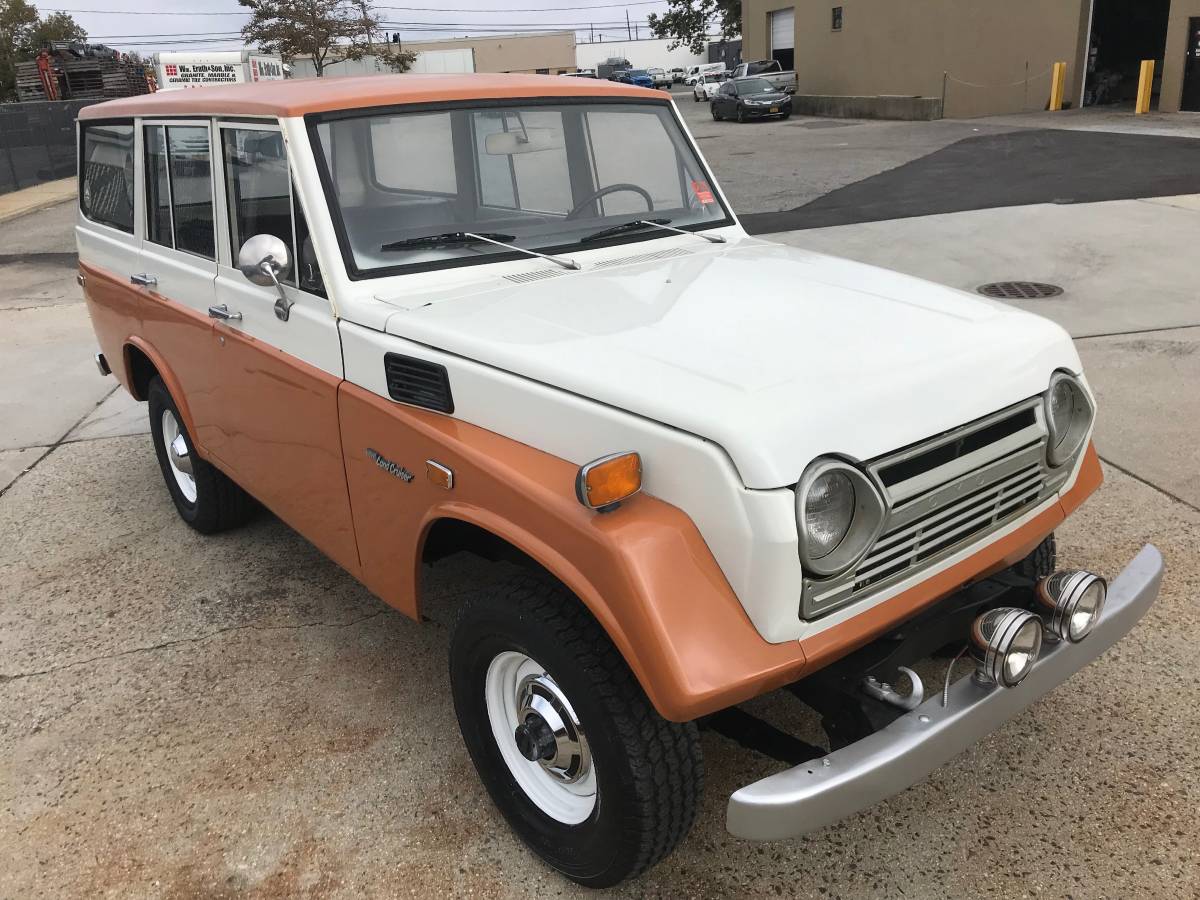 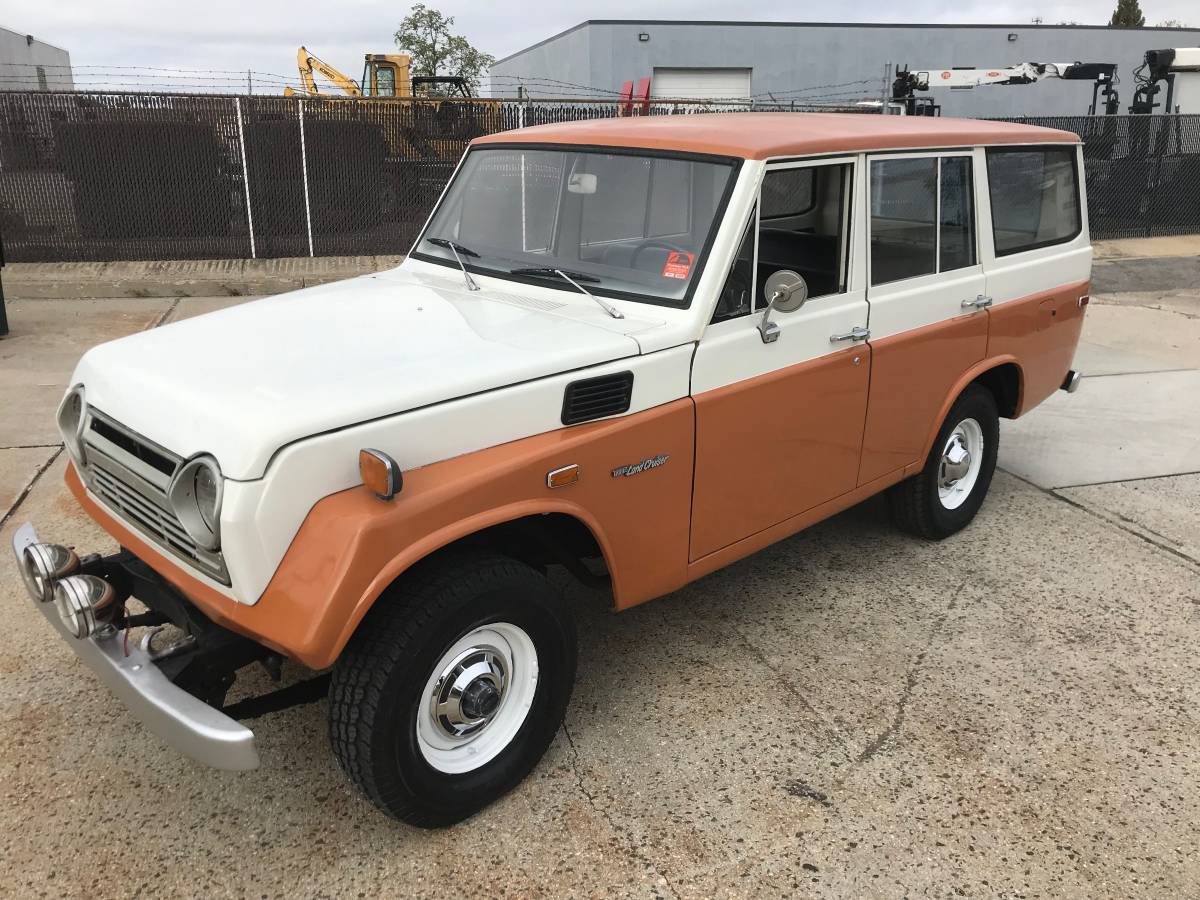 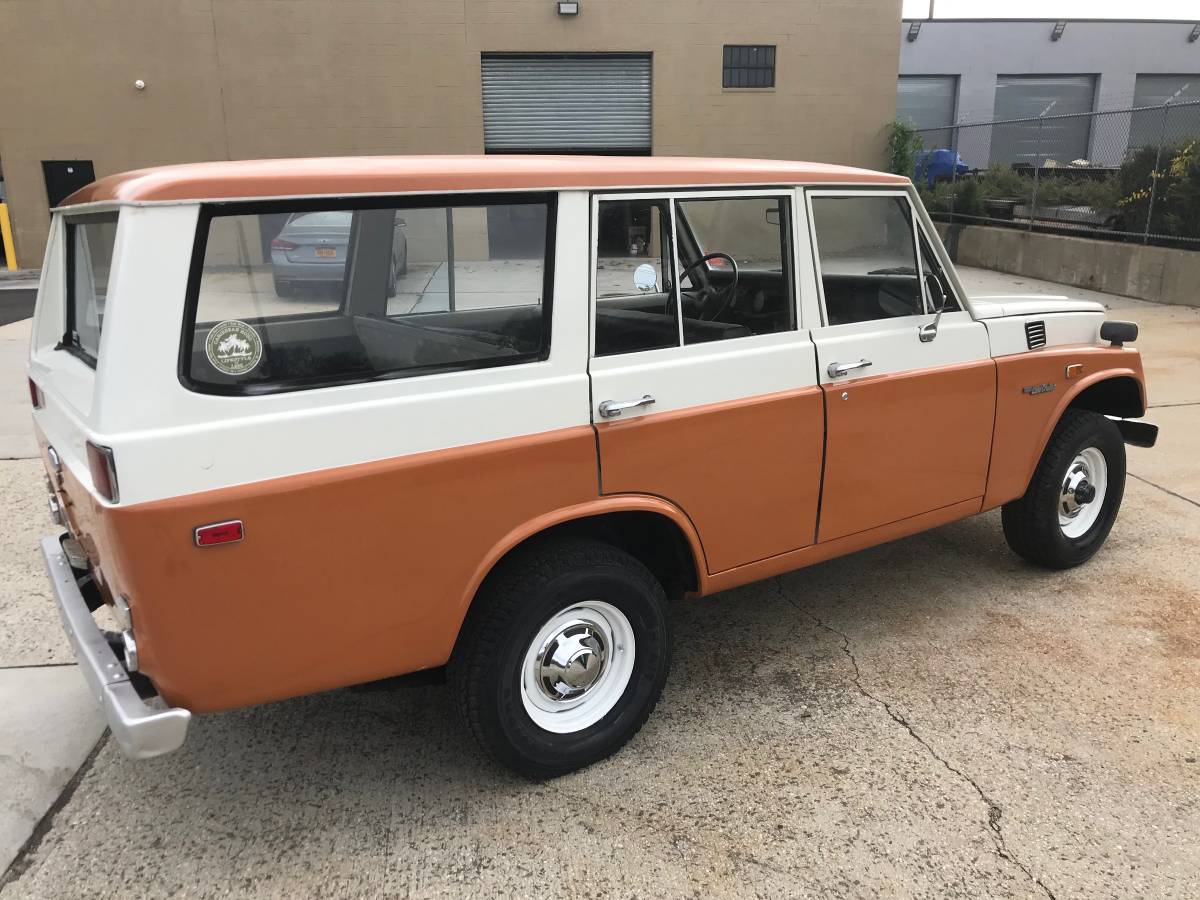 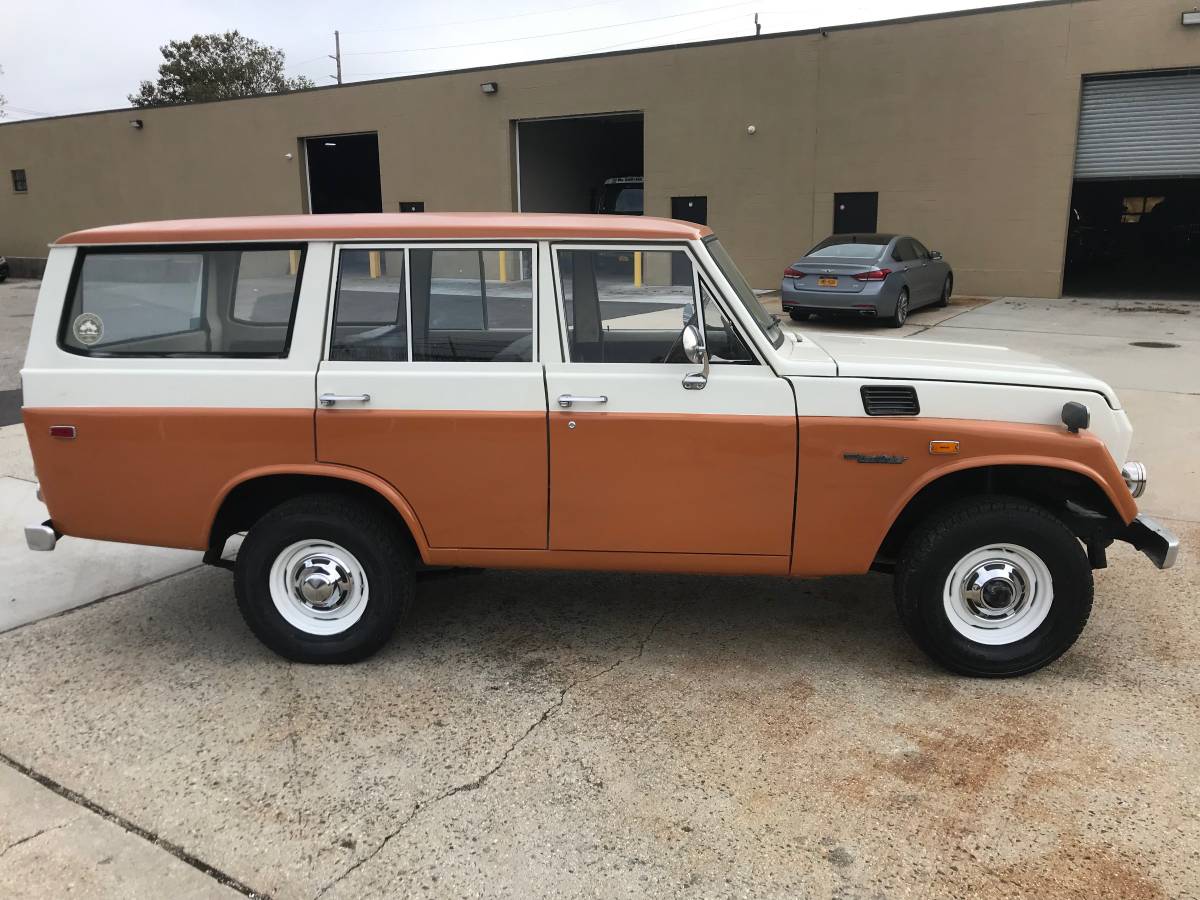 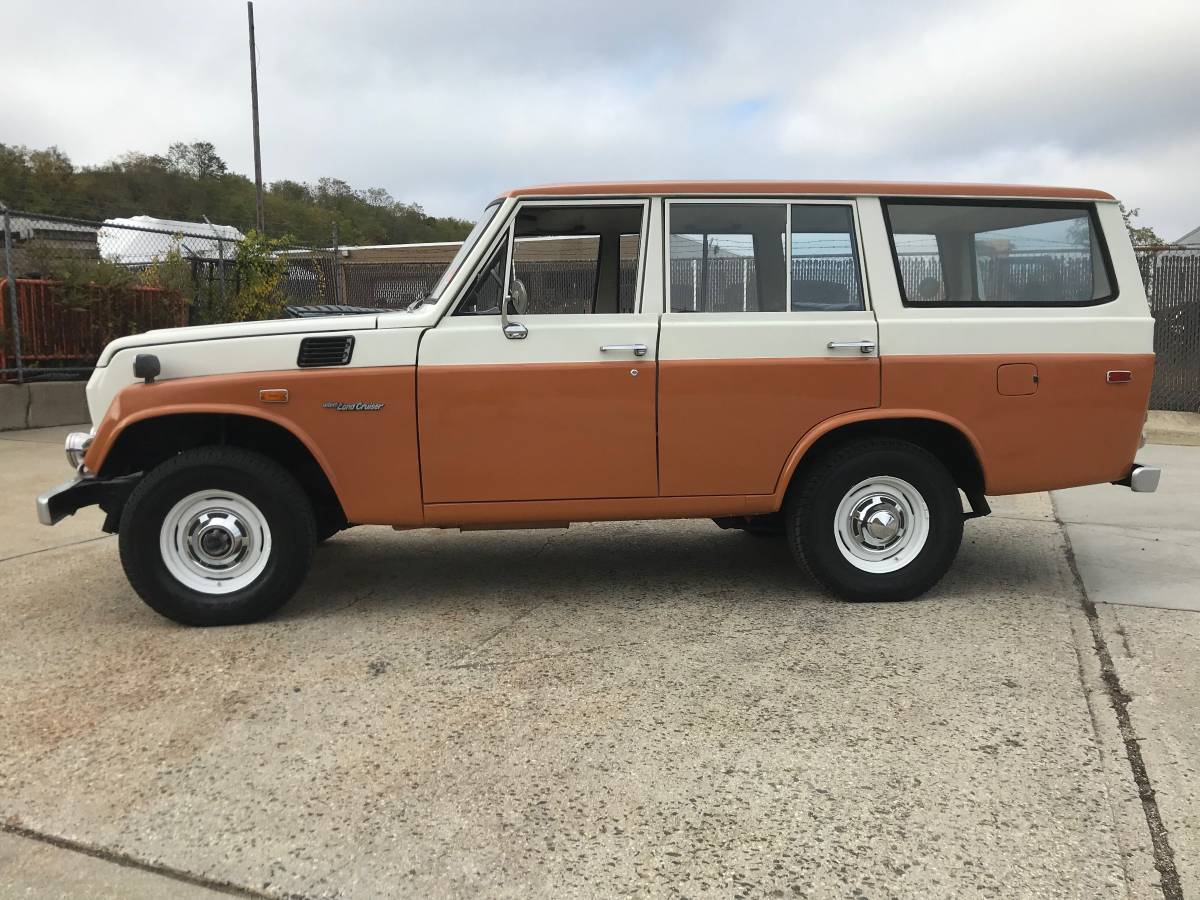 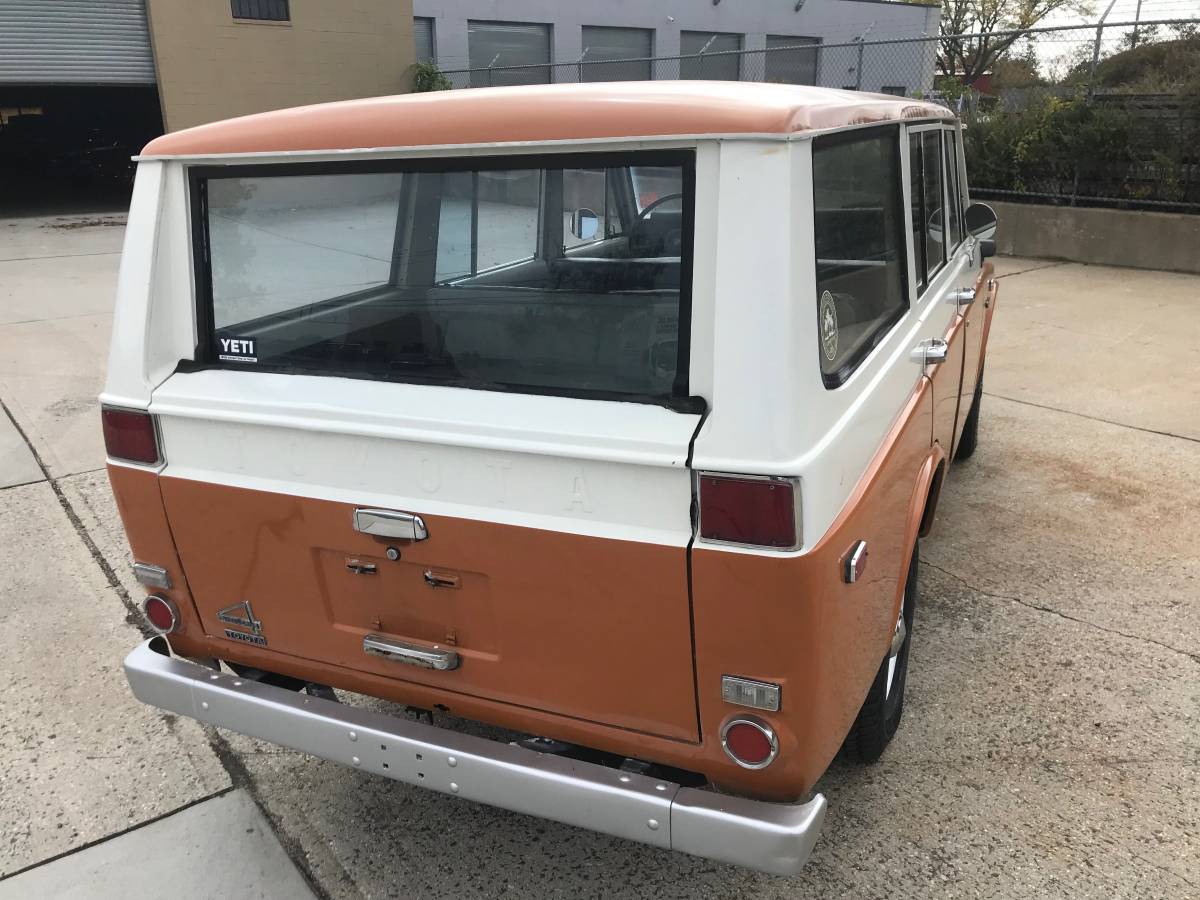 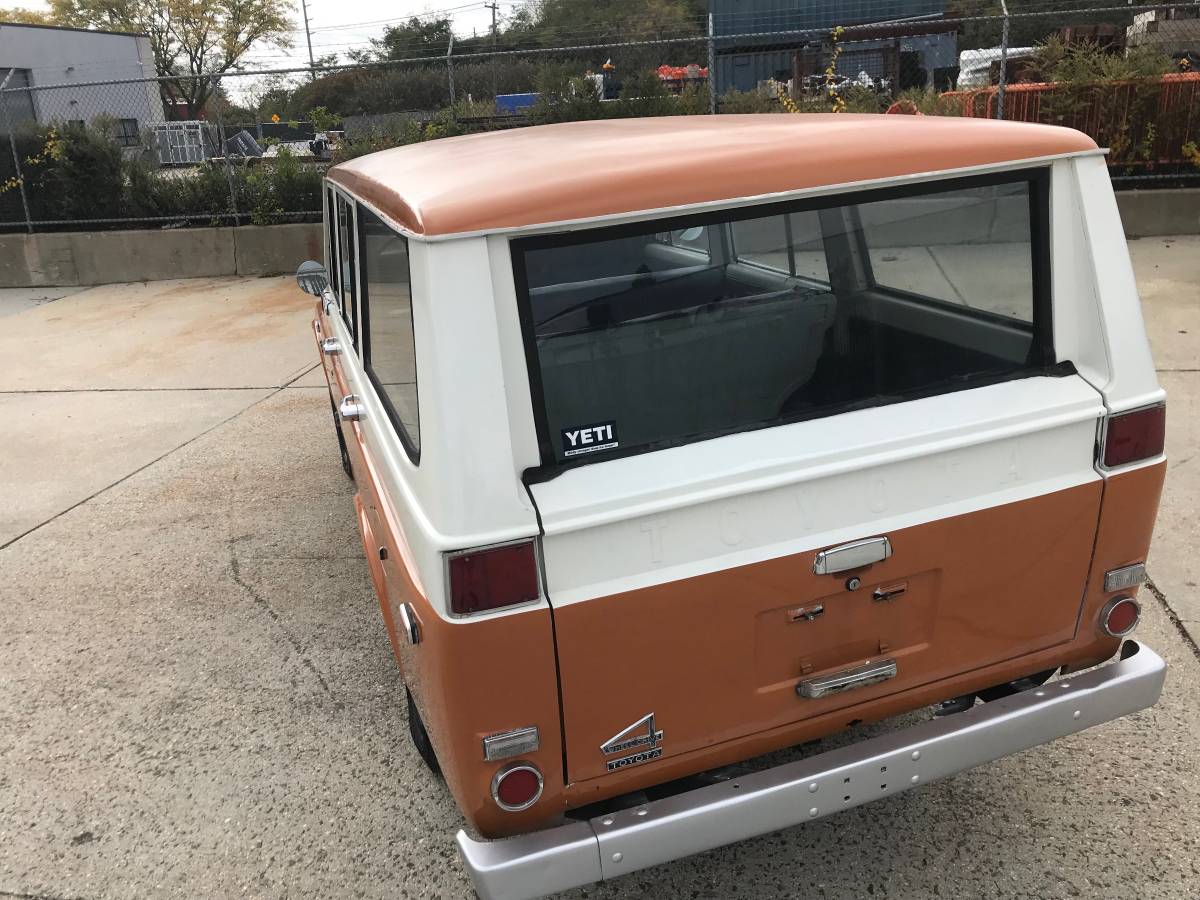 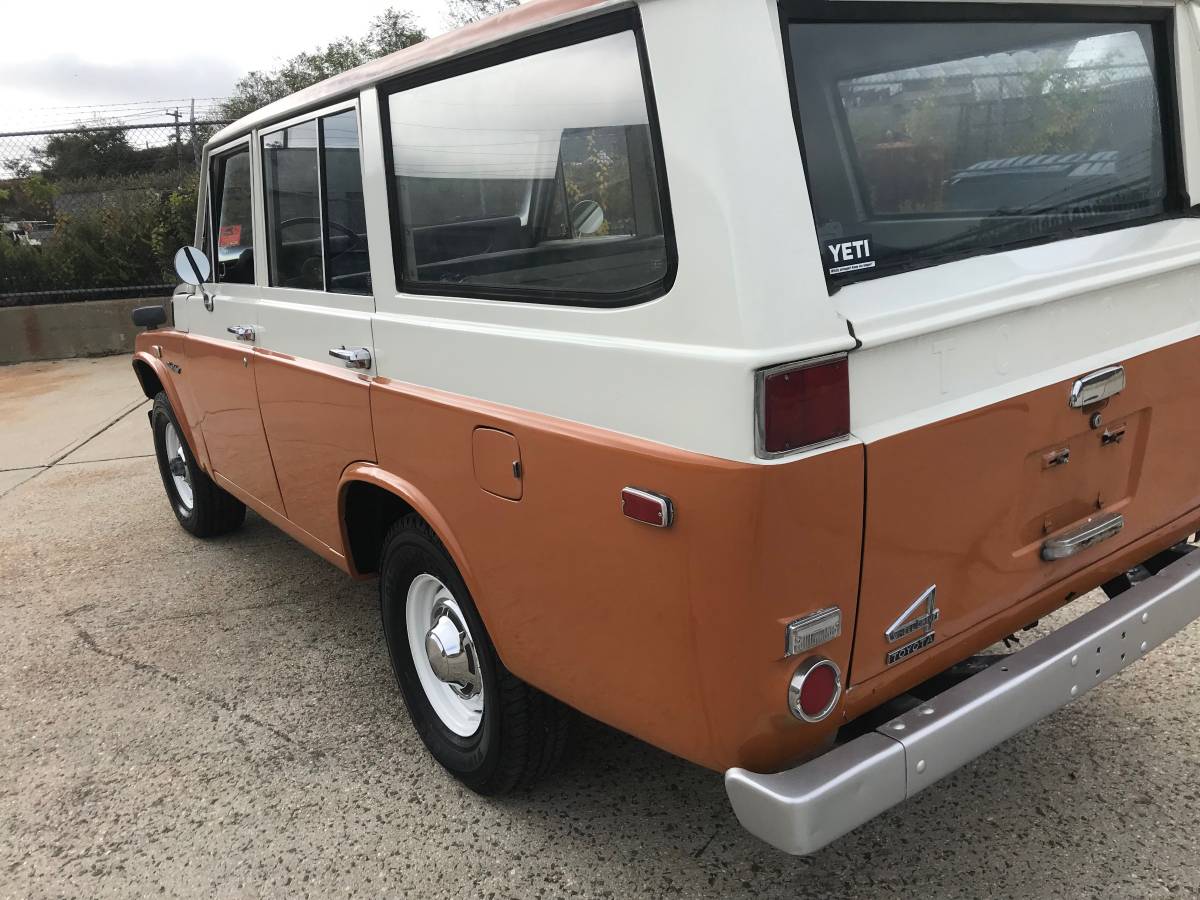 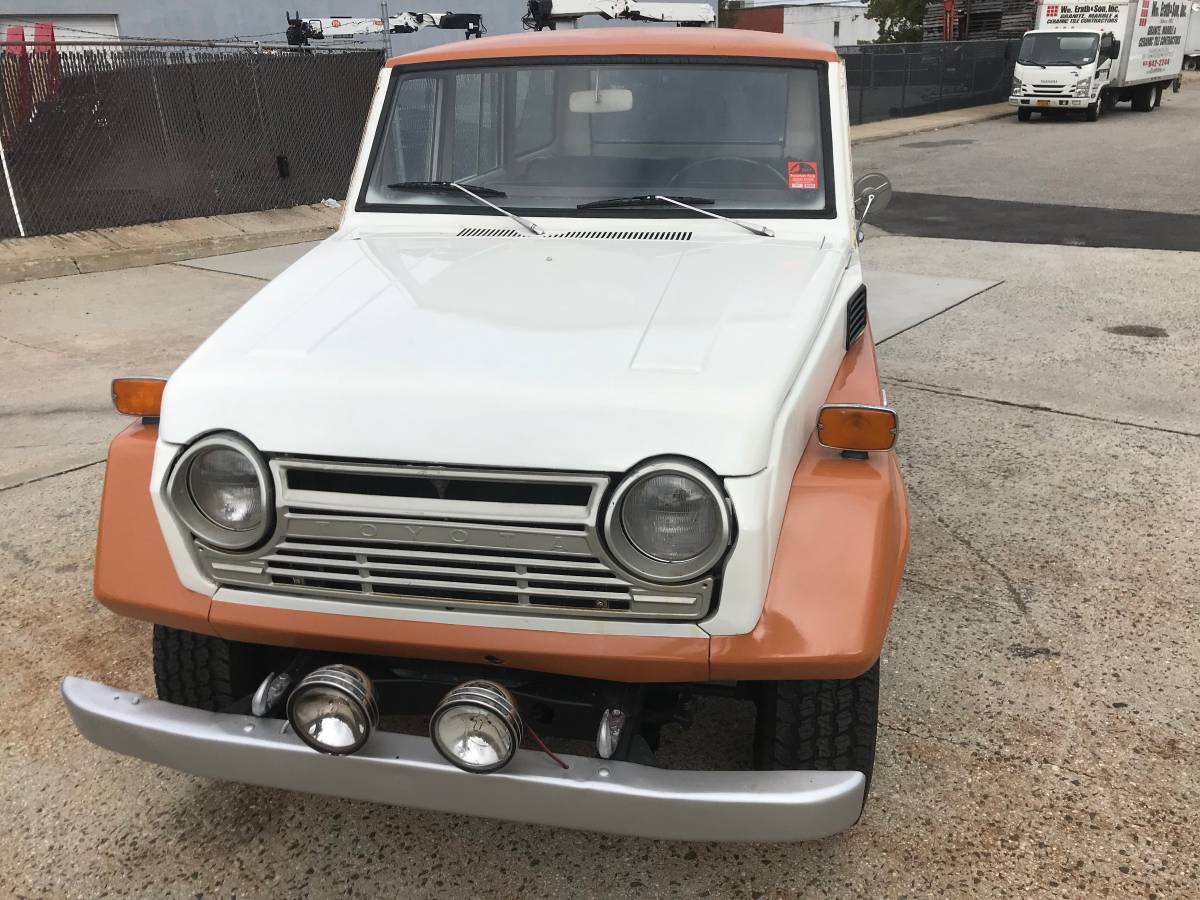 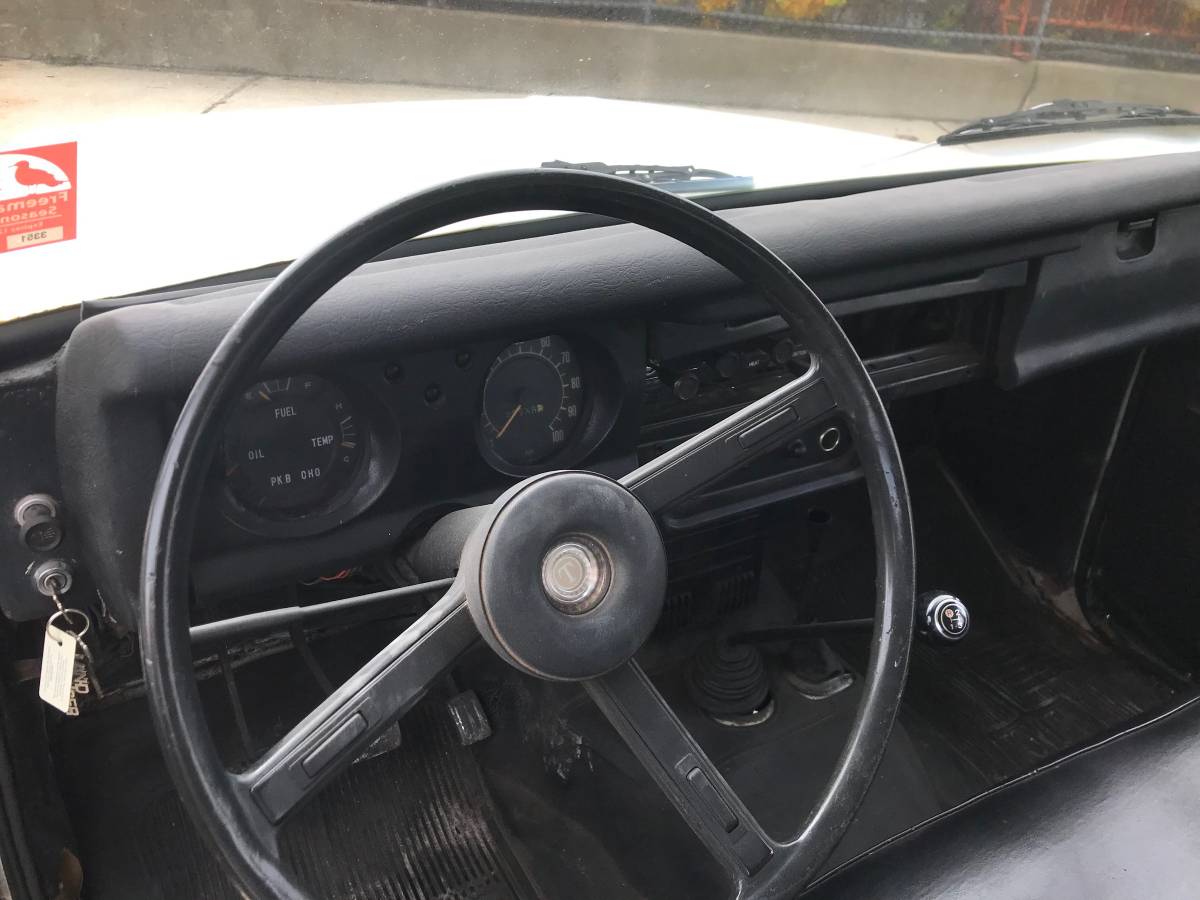 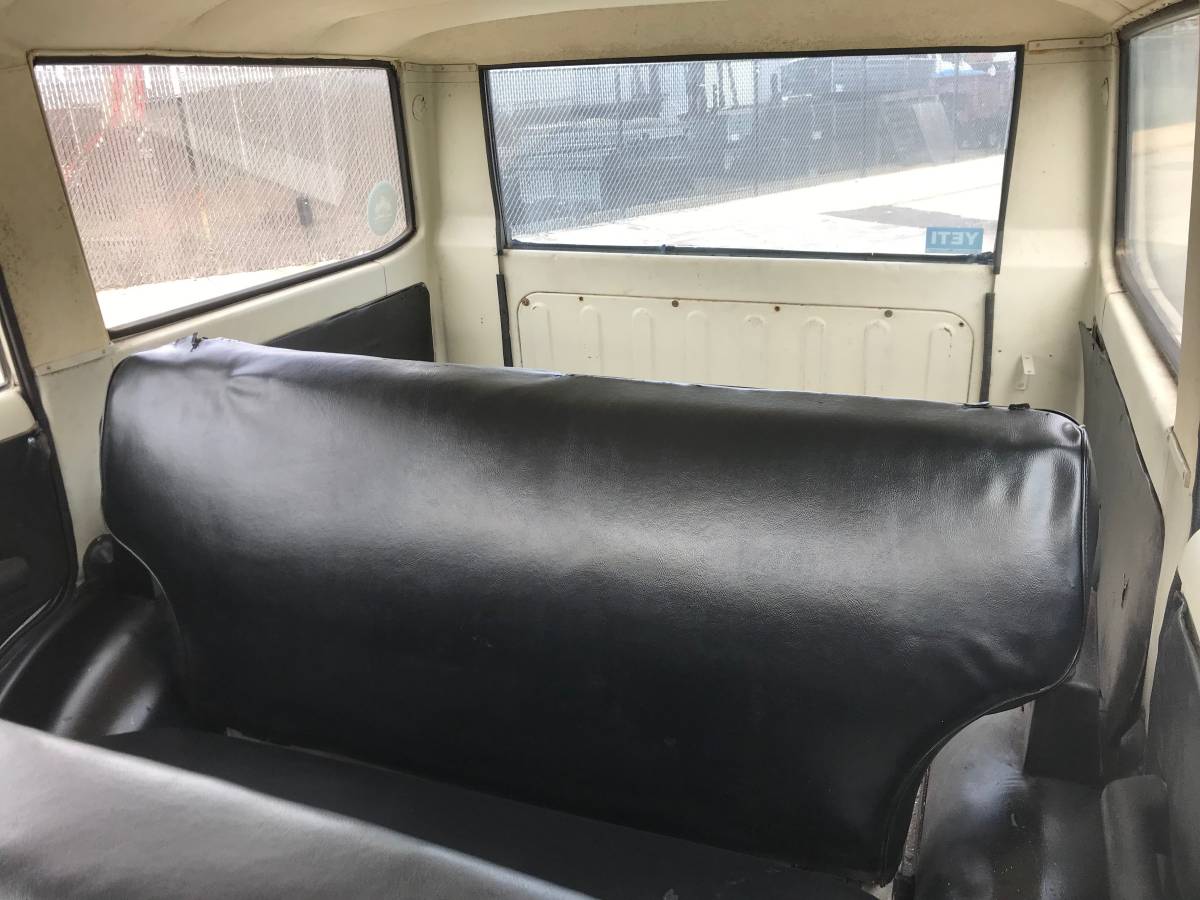 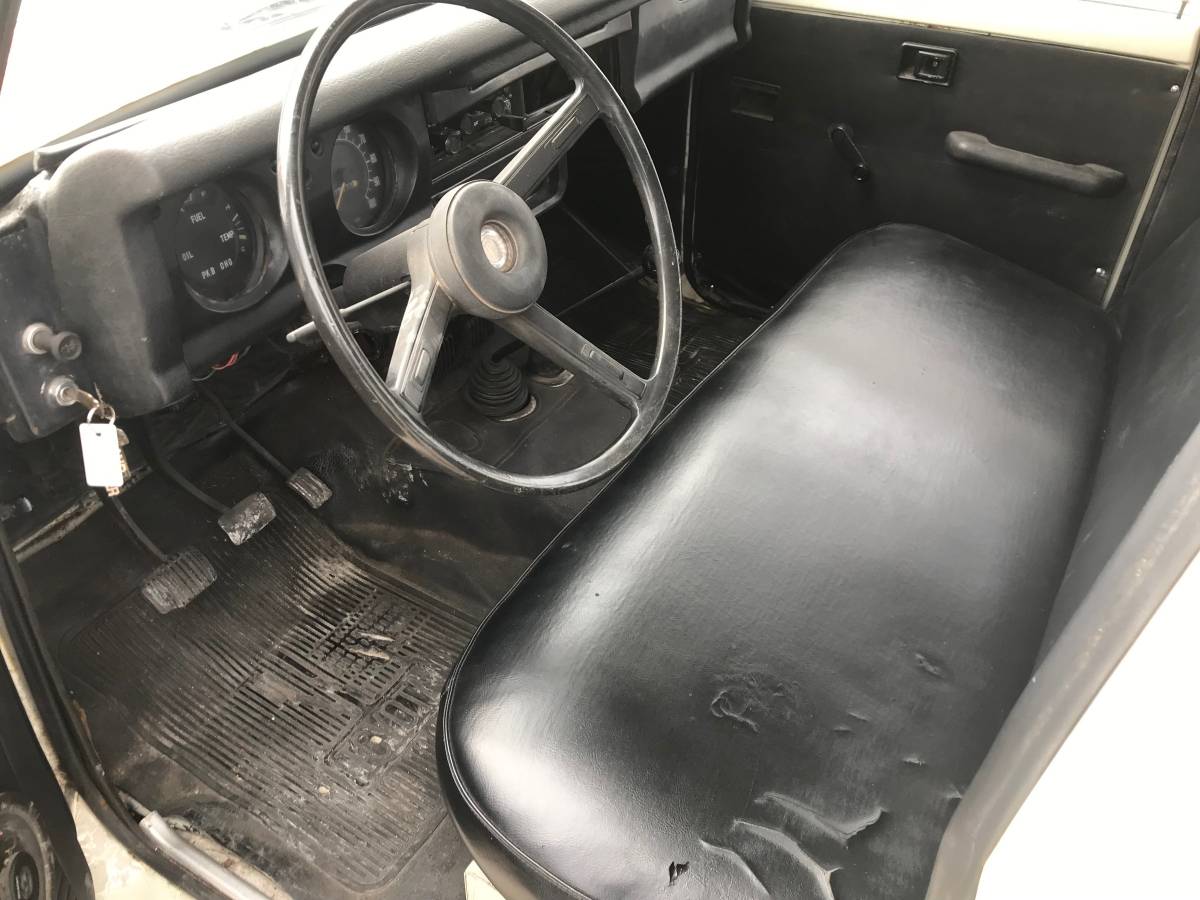 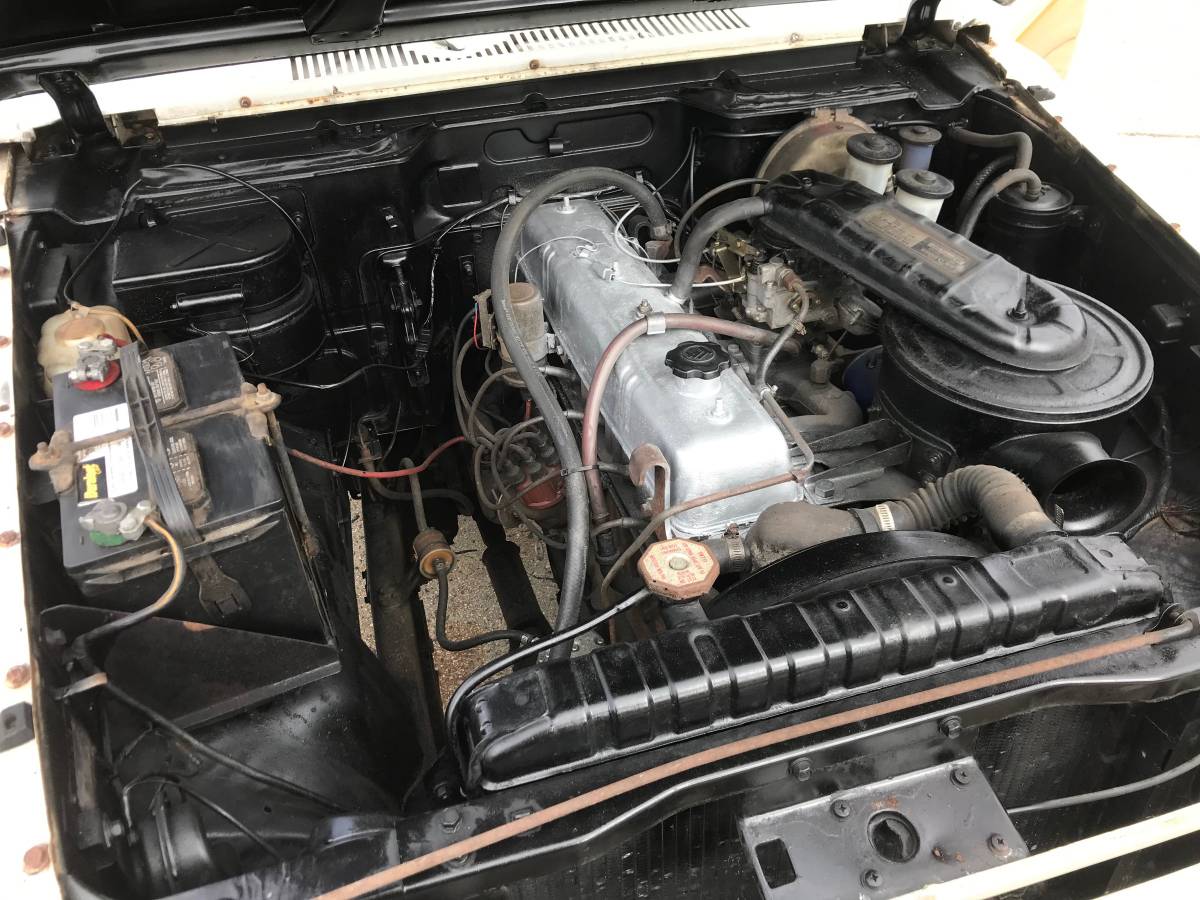 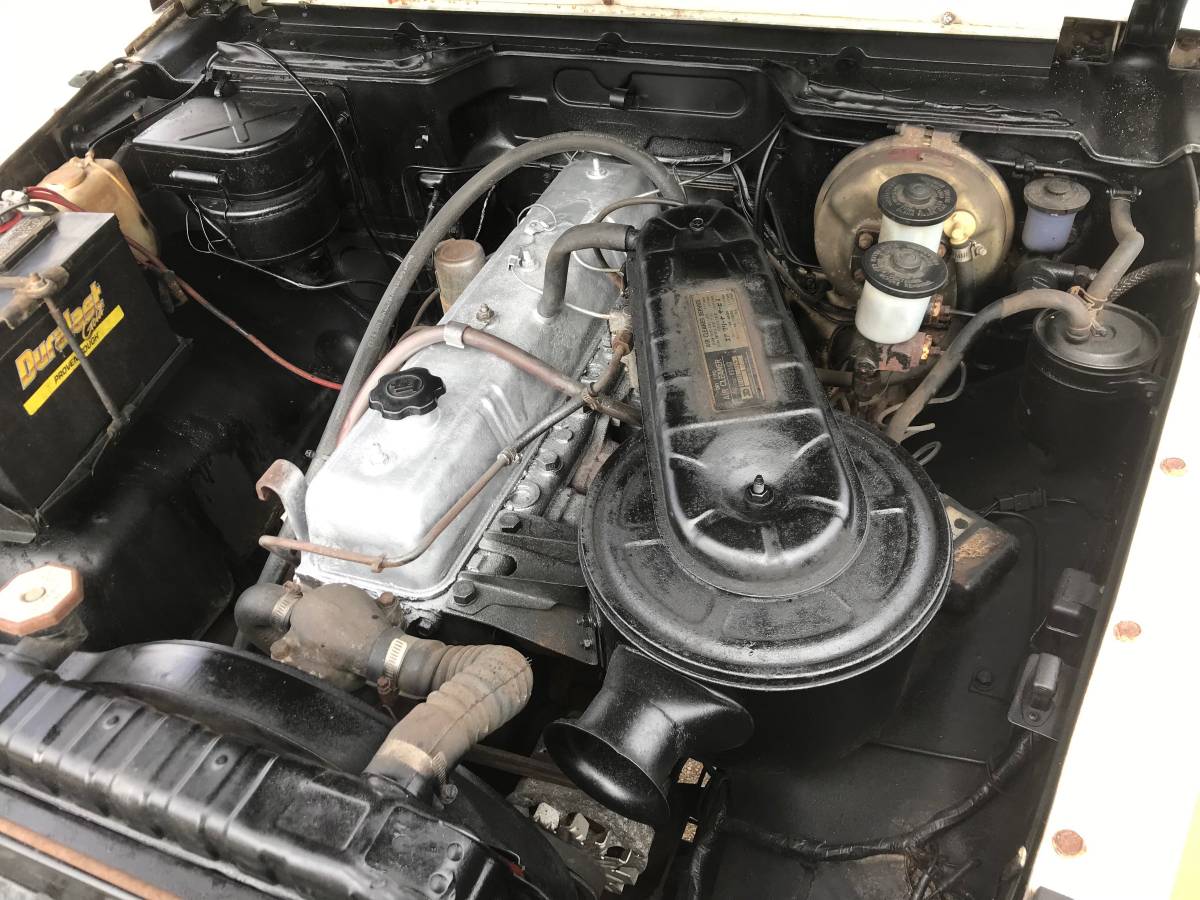 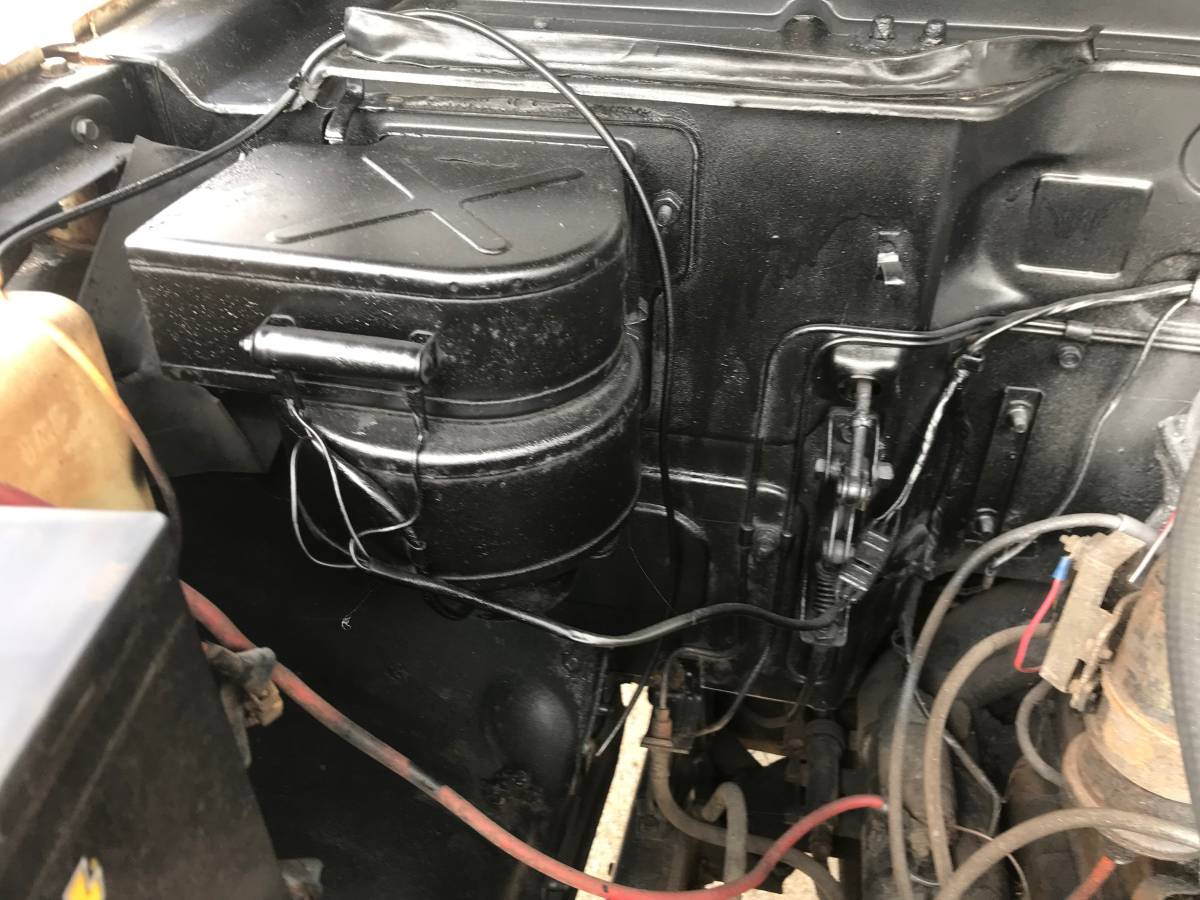 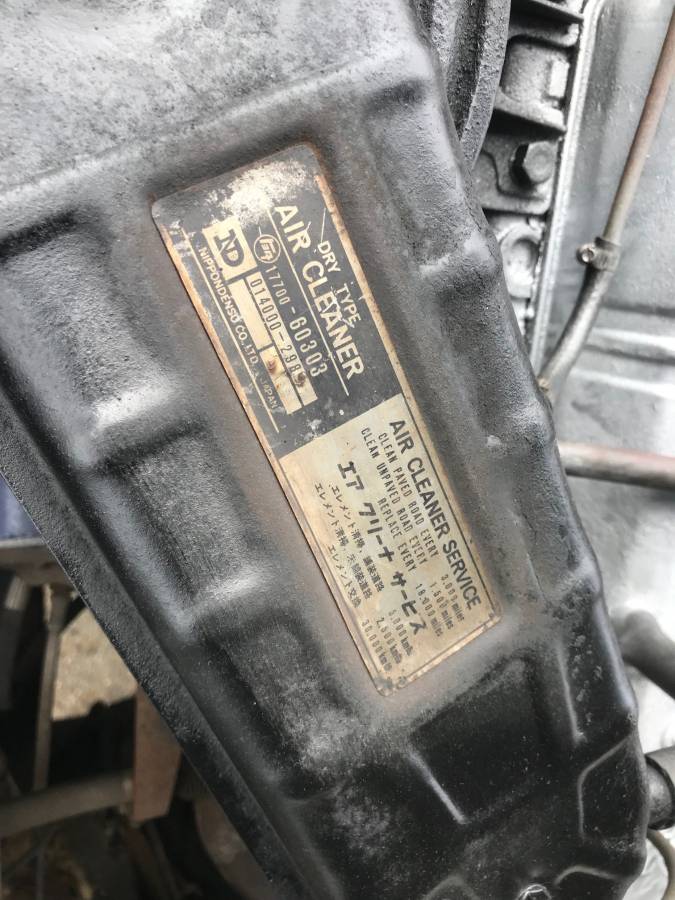 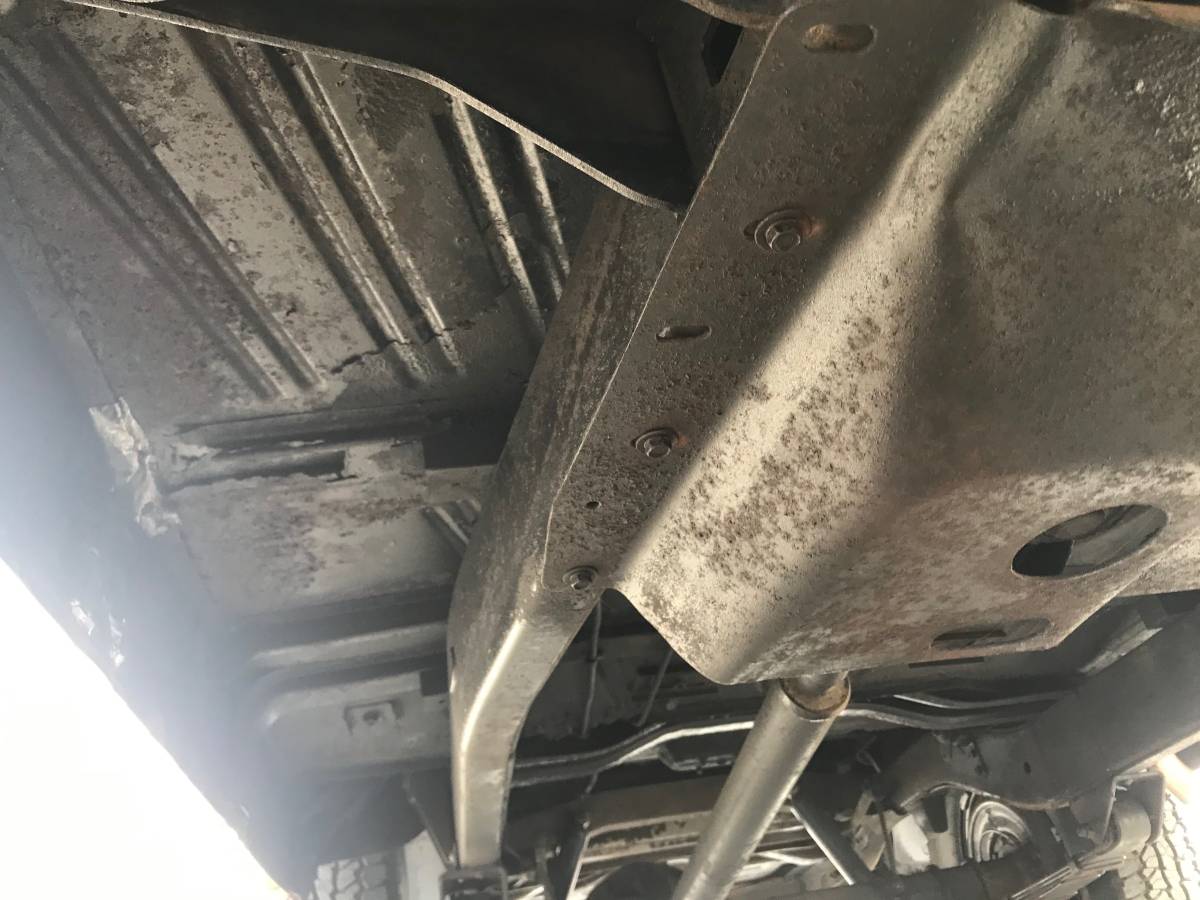 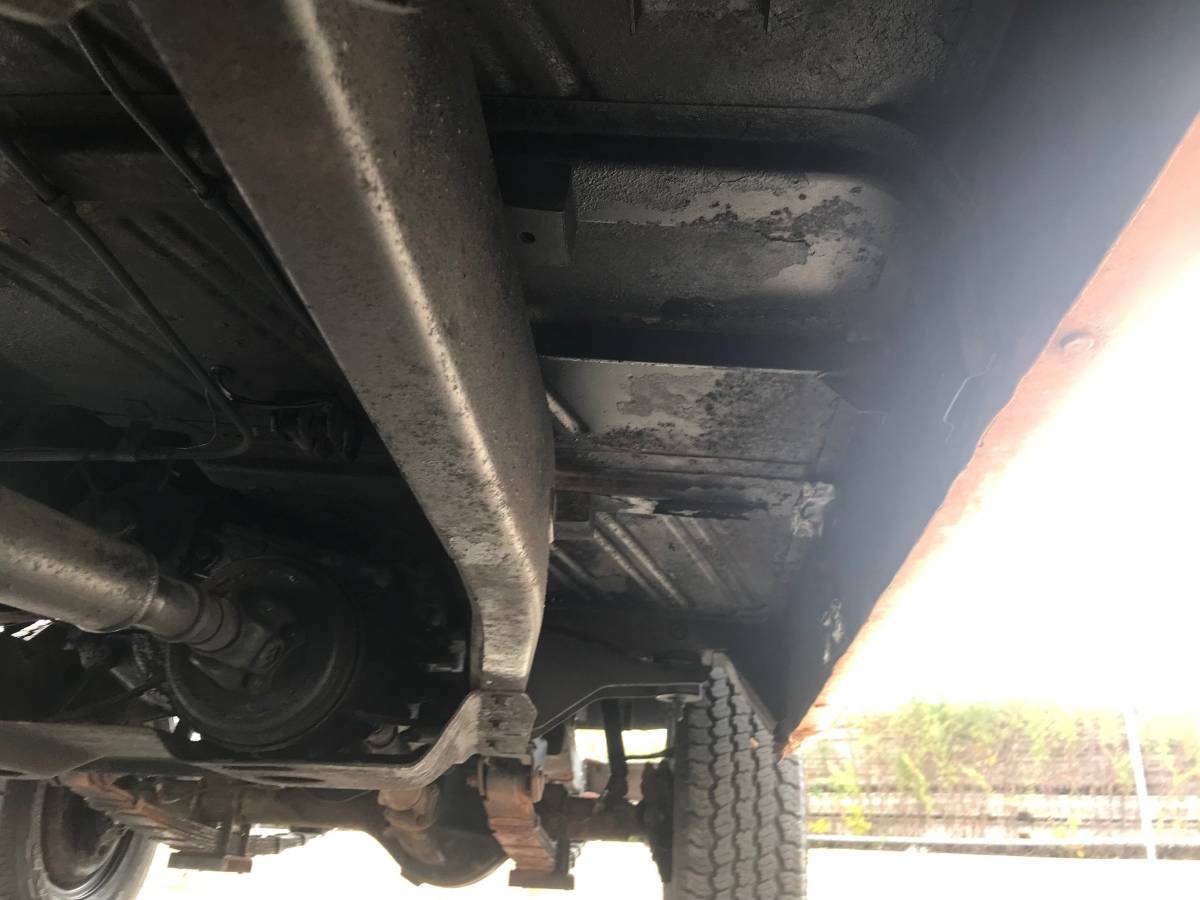 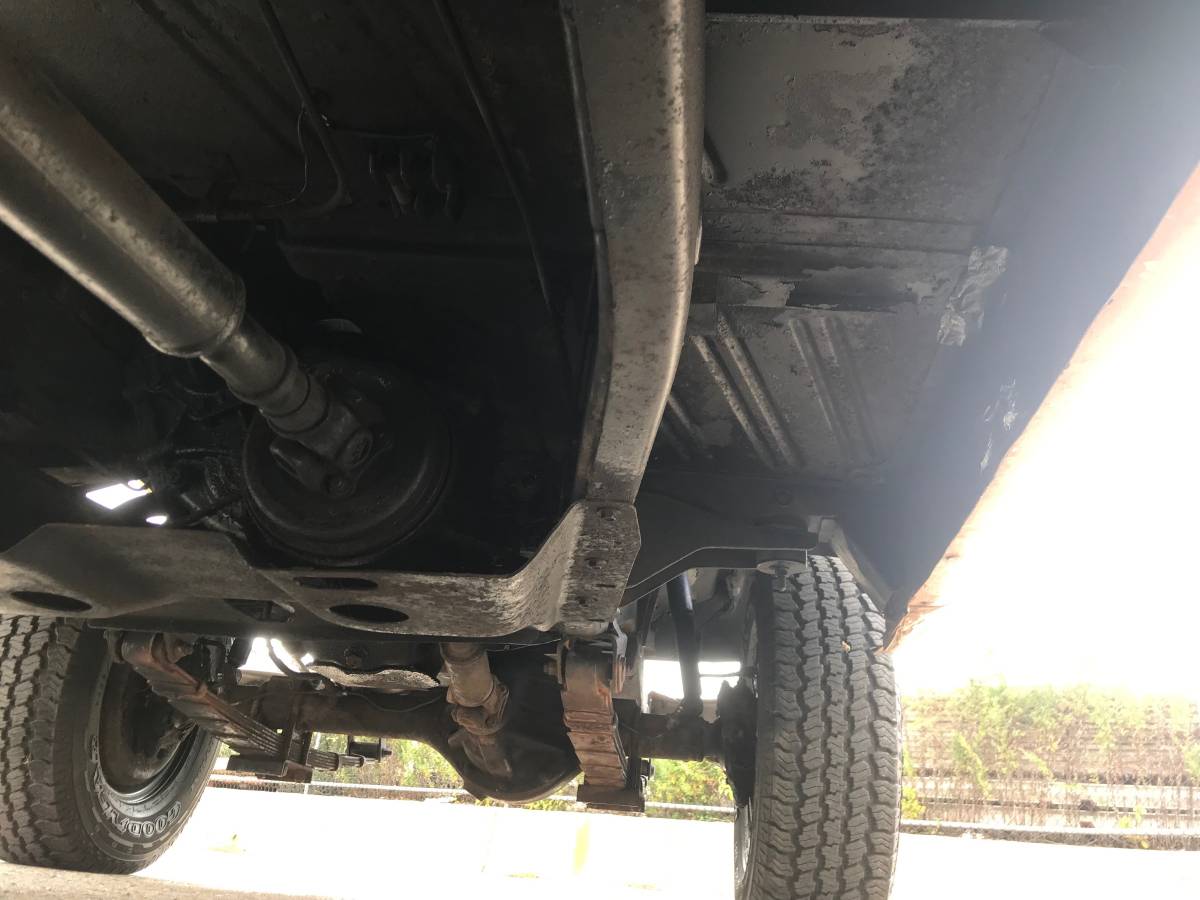 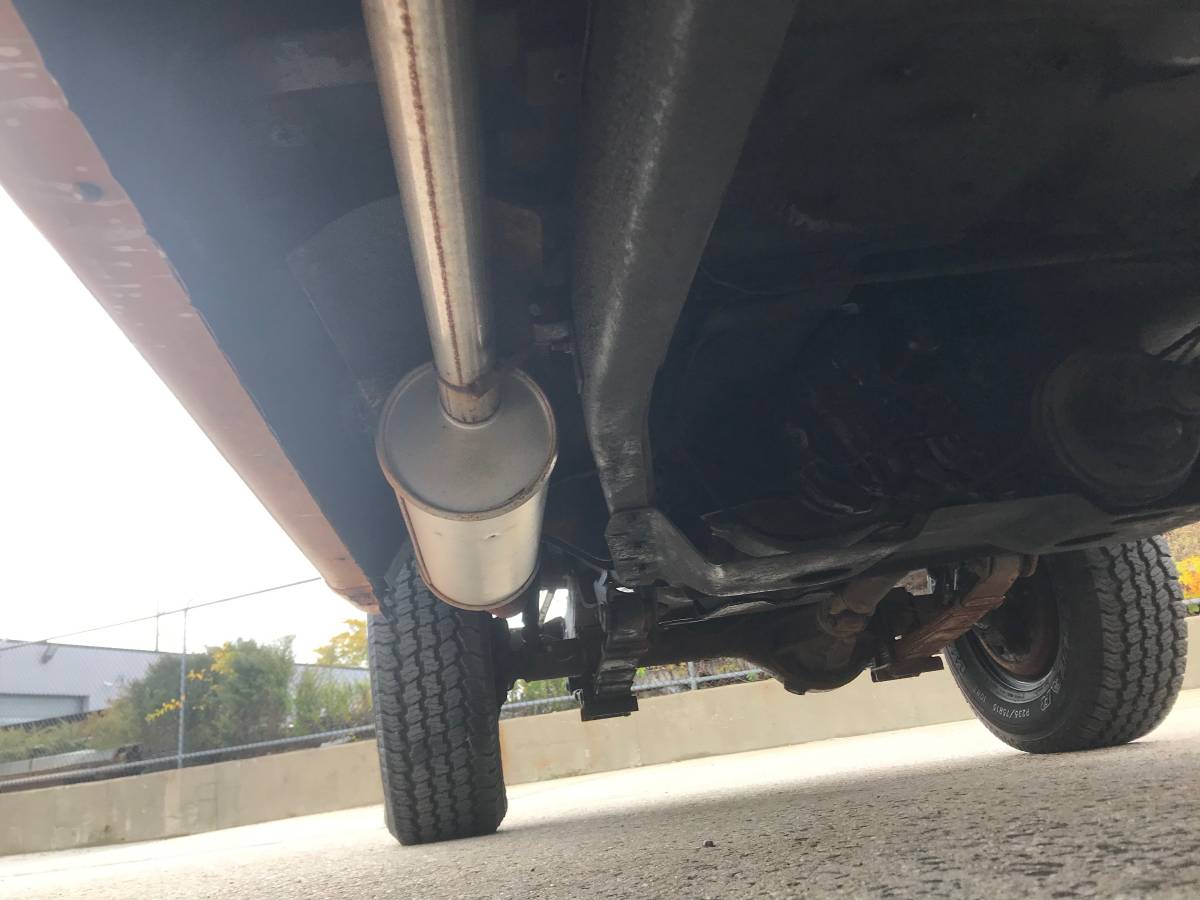 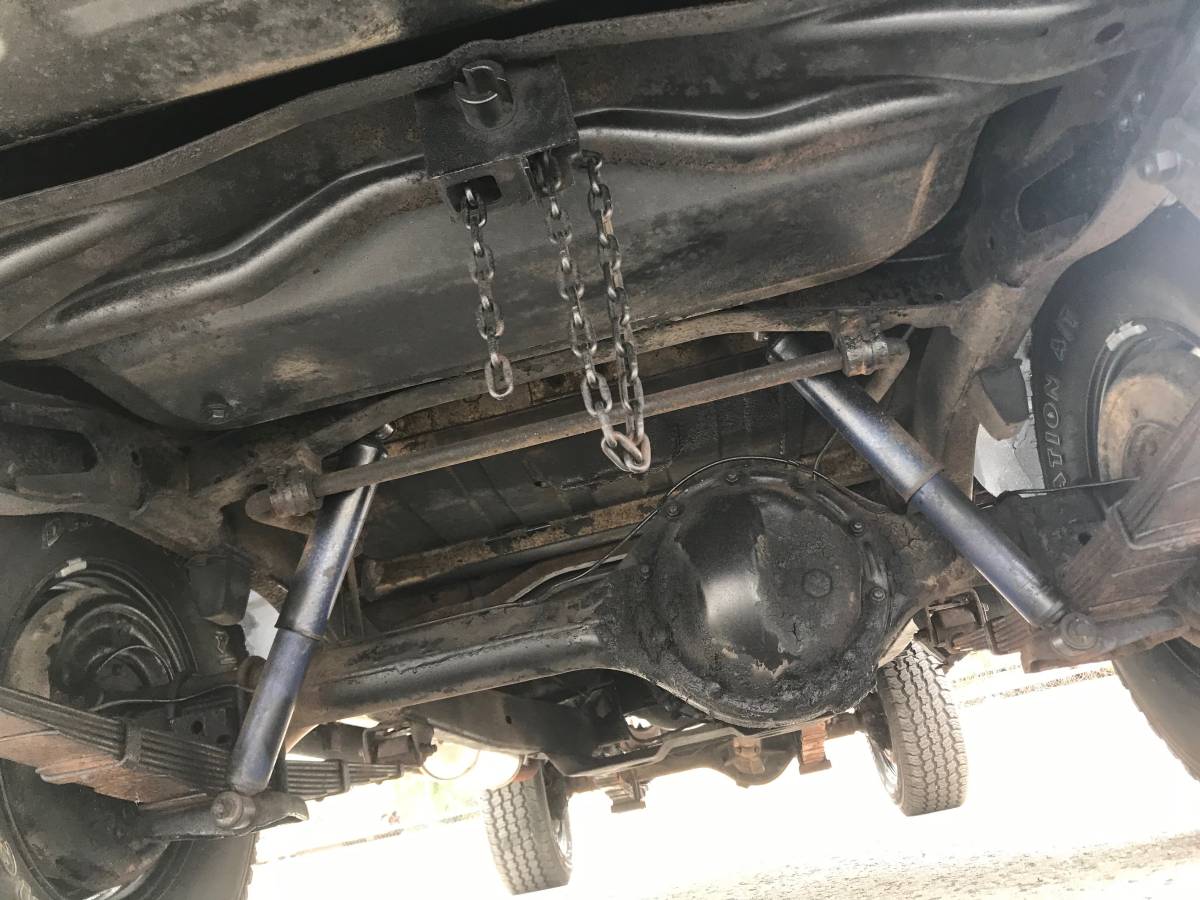 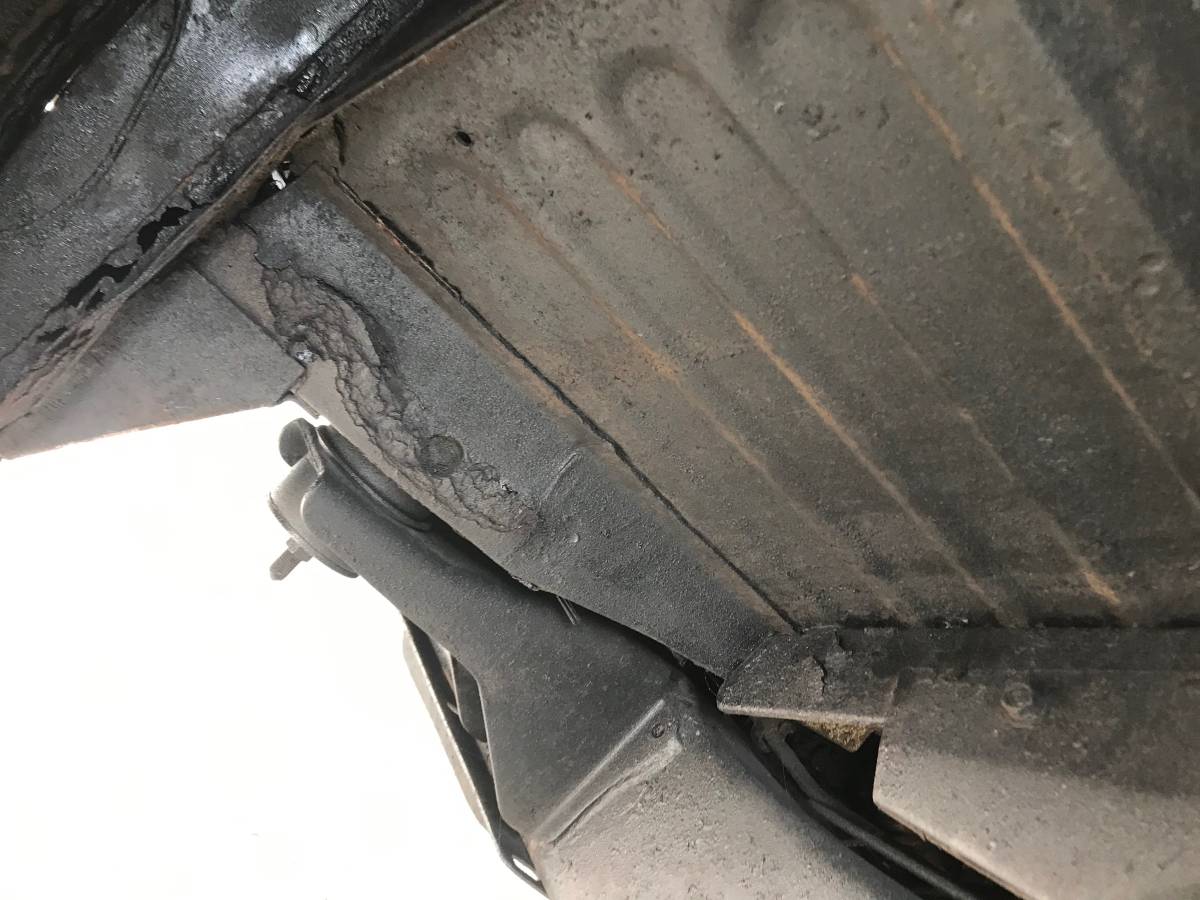 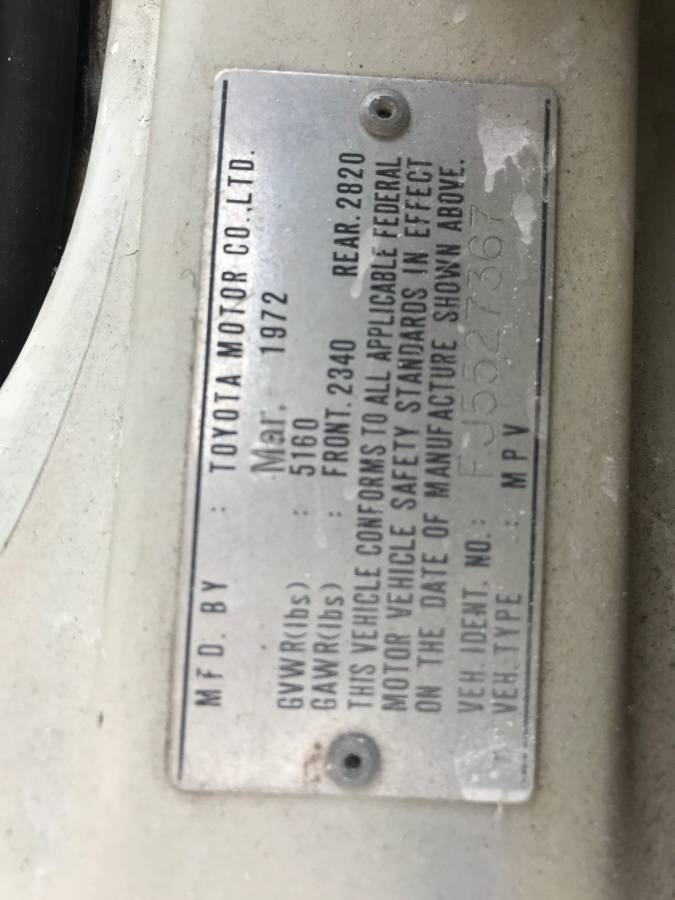 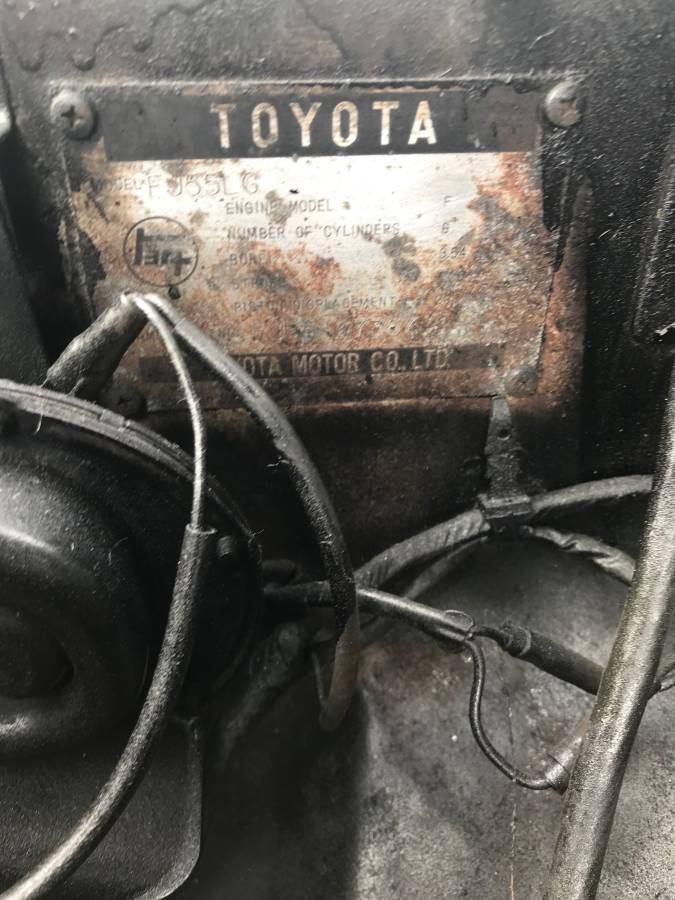 January 4th, 2021 Update – driver-quality vintage FJ-55 Land Cruisers in decent shape do not last long on the rare occasions an owner decides to sell.  This Iron Pig was no exception as the seller recently deleted their Craigslist ad, so we’re now calling this on “Sold!”   This one may have got away, but if you have your heart set on something similar, email us the details of what you’re looking for or call Rudy directly at (908)295-7330.

While Rover’s Land Rover and Toyota’s Land Cruiser share great reputations as capable off-road vehicles, the latter is better known for its reliable and virtually bullet-proof drive-trains that won’t leave you stranded out on the trail.  Decades before they became tarted-up luxury SUVs only blazing trails to-and-from malls, schools, and soccer practices, the four-door FJ55, nicknamed the “Iron Pig”, was the wagon version of Toyota’s capable off-roader.  This orange and white 1972 example originally listed in December 2020 in West Babylon, New York (Long Island) features a very solid body and frame along with its original F1 inline-six powerplant firmly priced at $16,850.  Comparing this price against the Hagerty Insurance Online Valuation Tool confirms this private seller has their FJ55 priced between this guide’s #4 “Fair” (Daily Driver) estimate of $11,000 and the #3 “Good” appraisal of $23,500.

This excerpt from the official Toyota UK Blog provides a great summary of why FJ55 Land Cruisers are called Iron Pigs:

“Built from 1967 through to 1980, the FJ55 was an important milestone in Land Cruiser history. It marked the point where Toyota separated Land Cruiser production into two parallel model lines. The original continued its role as a heavy-duty workhorse, while the new station wagon line introduced by the 50-series Land Cruiser was developed to tap into the increasing popularity of family-friendly off-road machines.

Before the introduction of the FJ55, Toyota had briefly explored this recreational niche with the FJ45LV, a rare export model adapted from the long-wheelbase 40-series. But while the earlier car was not a definitive success due to the restrictions of its underpinnings, the new 50-series was purpose-built and well-received. As a thoroughbred Land Cruiser, the FJ55 remained a credible off-roader, was as robust and reliable as ever, and bore a strong family resemblance to the much-loved 40-series.

In fact, it was as a direct result of its familial design that the nickname ‘Iron Pig’ was coined. Not to be confused with pig iron, which describes crudely smelted iron, the phrase even has the dubious privilege of its own definition in the online Urban Dictionary.

Part of the reason for the Iron Pig nickname comes from the model’s distinctive ‘face’. There is a definite pig-eyed element to the circular headlights, which are comparatively small, positioned conspicuously inboard as in the iconic 40-series Land Cruiser, and deeply set within the individual, clearly defined bezels.

Squint a little more and you can just about envisage how the long, tapering bonnet line leading to the compact grille could resemble a pig’s muzzle and snout. And is there a suggestion of a friendly, upward-curving smile in the way the front wings flow around the grille, especially in this two-tone paintwork?

In addition, the FJ55 is pig-like in proportions. It initially appears stocky and imposingly sturdy yet there is an unusually svelte quality present, too. Measurements reveal that this classic Land Cruiser is actually the width of a modern Toyota Yaris yet significantly longer and taller than a Toyota RAV4.

Rather than being derogatory, the nickname Iron Pig is therefore a genuine term of endearment and it only applies to this specific Land Cruiser series – a model that remains the most distinctive of the entire breed.

We’re not sure why they didn’t include the link in their Craigslist ad, but here’s a video of what we believe to be the same FJ55 currently featured for sale:

Finding a vintage FJ55 in as solid and unmodified condition as this example is very hard to come. We hope the next caretaker shows restraint by keeping this Iron Pig true to its original form and not modifying it.  Good luck with the purchase!

“This is my absolute FIRM PRICE! JUNK projects are 12k-$15k!

These are very rare, you see all the rest of the Toyotas advertised for sale but rarely an FJ55! 1972 Toyota FJ55 has the original F1 inline 6 motor and original 3-speed transmission and is running and driving well. (these don’t drive the greatest anyway! LOL) Nice older original colors paint job with hardly a nick or scratch in the entire truck if any! Has pretty good shine too, looks original. It was stored mostly after it was painted and the gentleman was working on it. Odometer reads 22k mi so probably 122k. Pretty original interior in pretty good shape. Original tags are pictured clearly. Truck has most of its original parts if not all. The lights work, even the reverse lights. Gauges do not work and I can’t get the back window to work so that will need repair, the back panel comes off with 6 screws or so and everything is right there to repair it. Very little rust underneath but there is a couple of small spots.