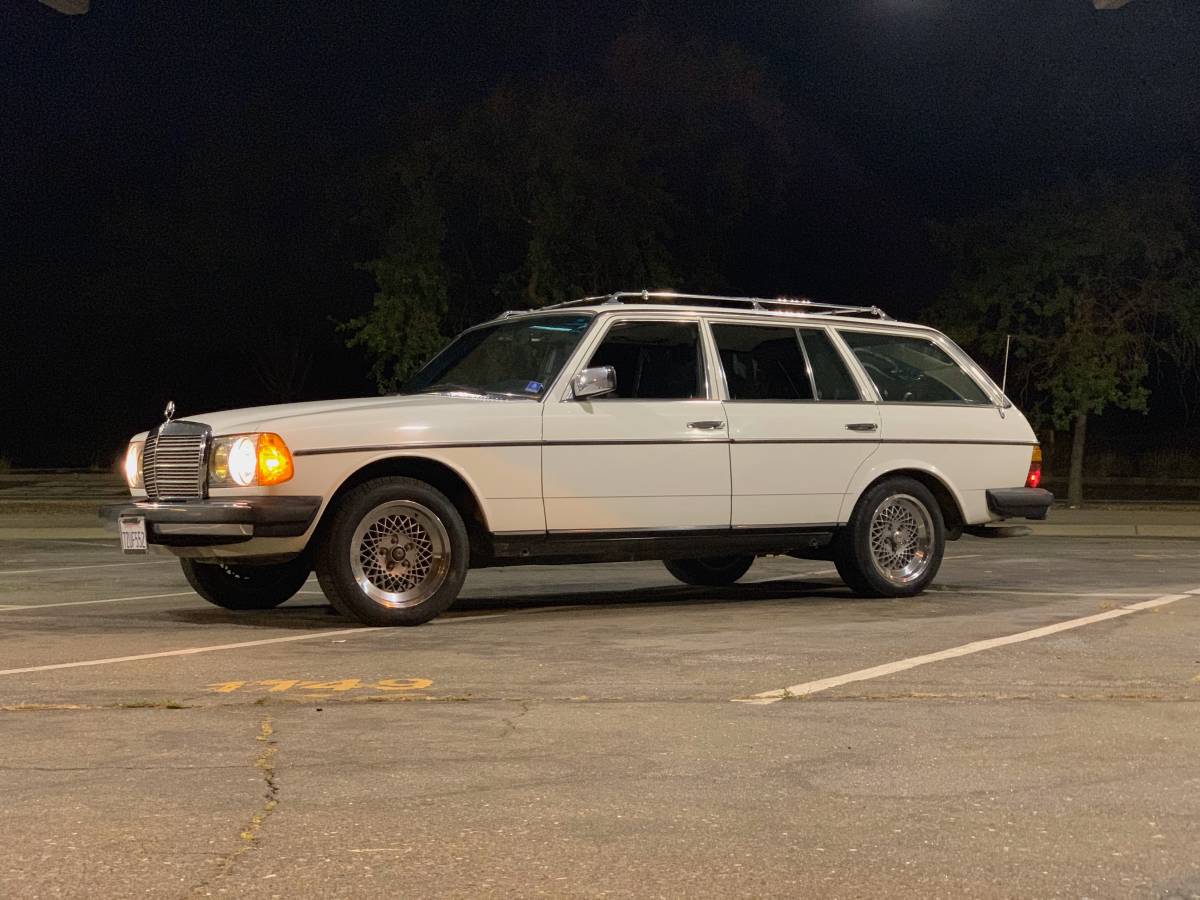 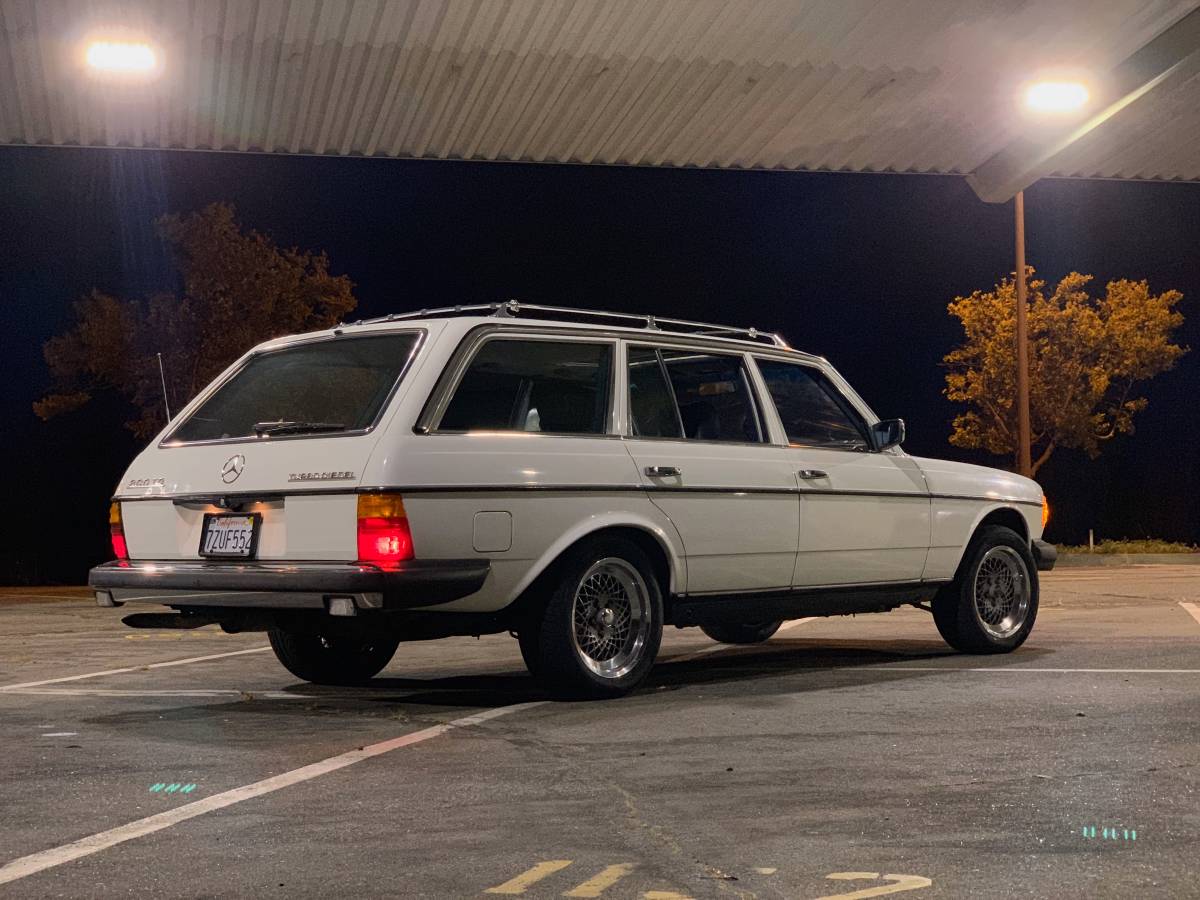 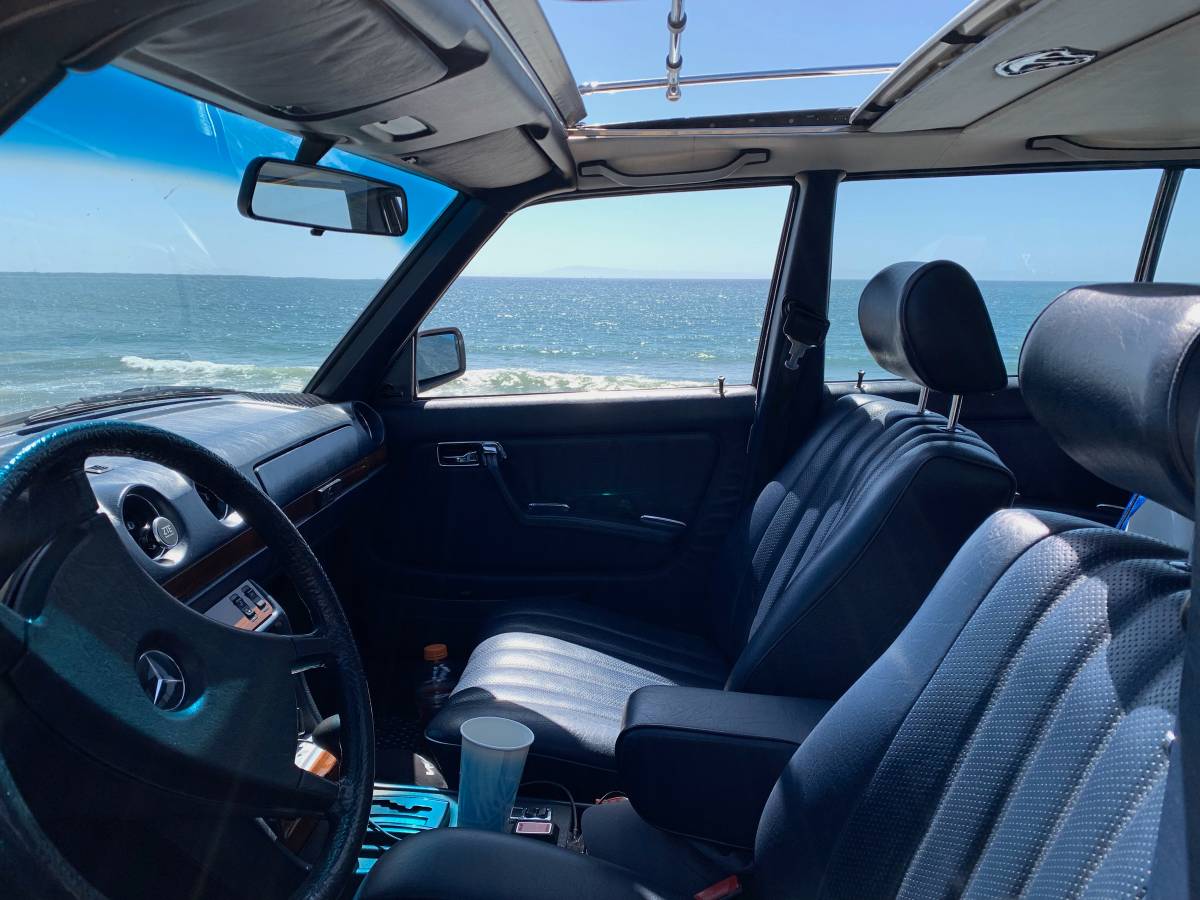 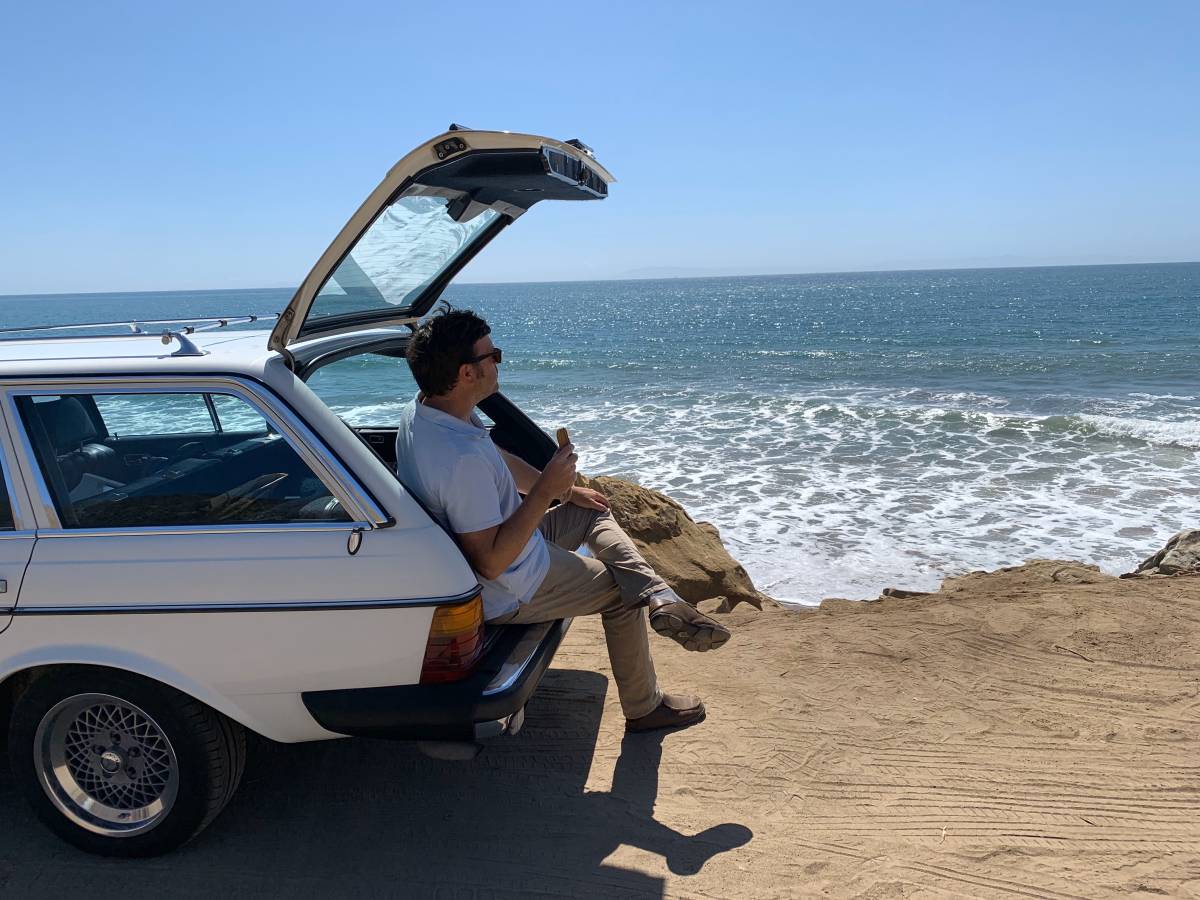 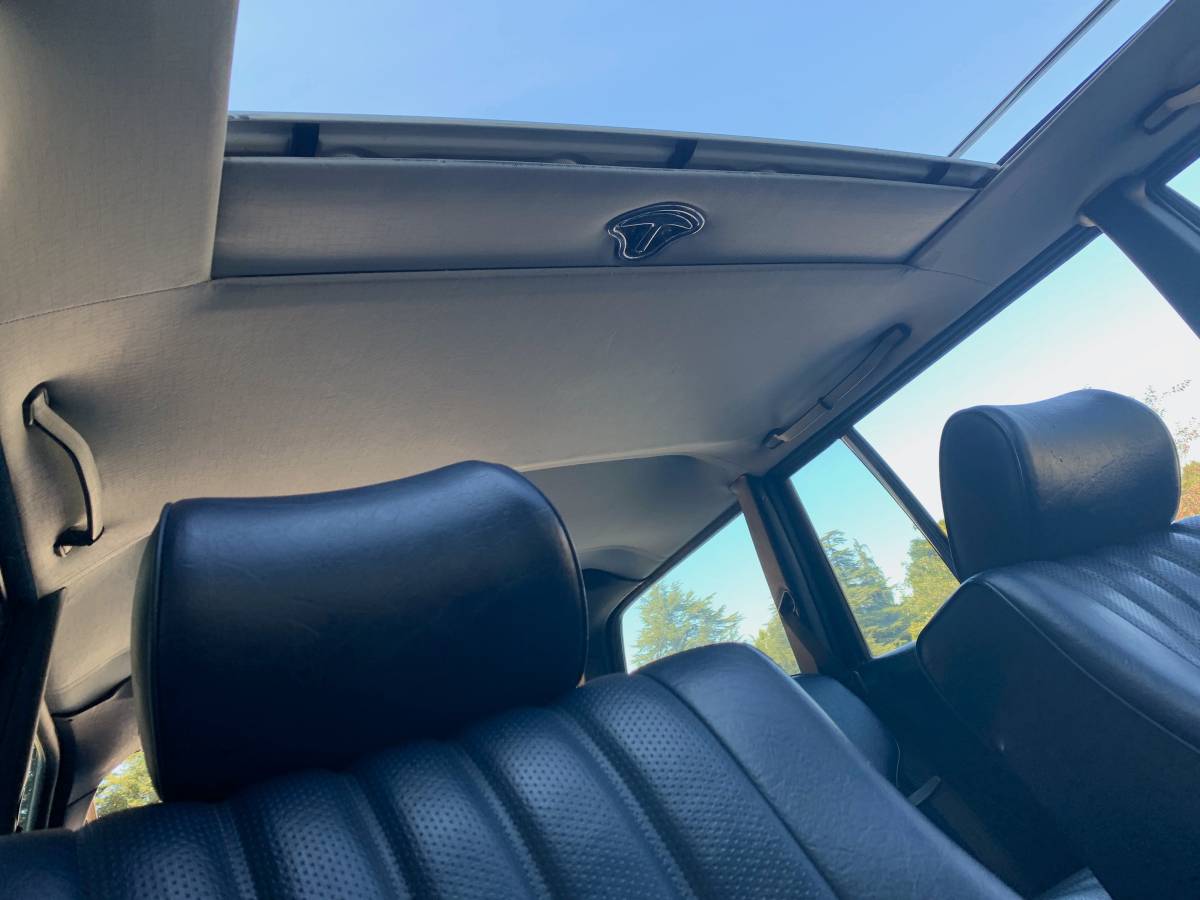 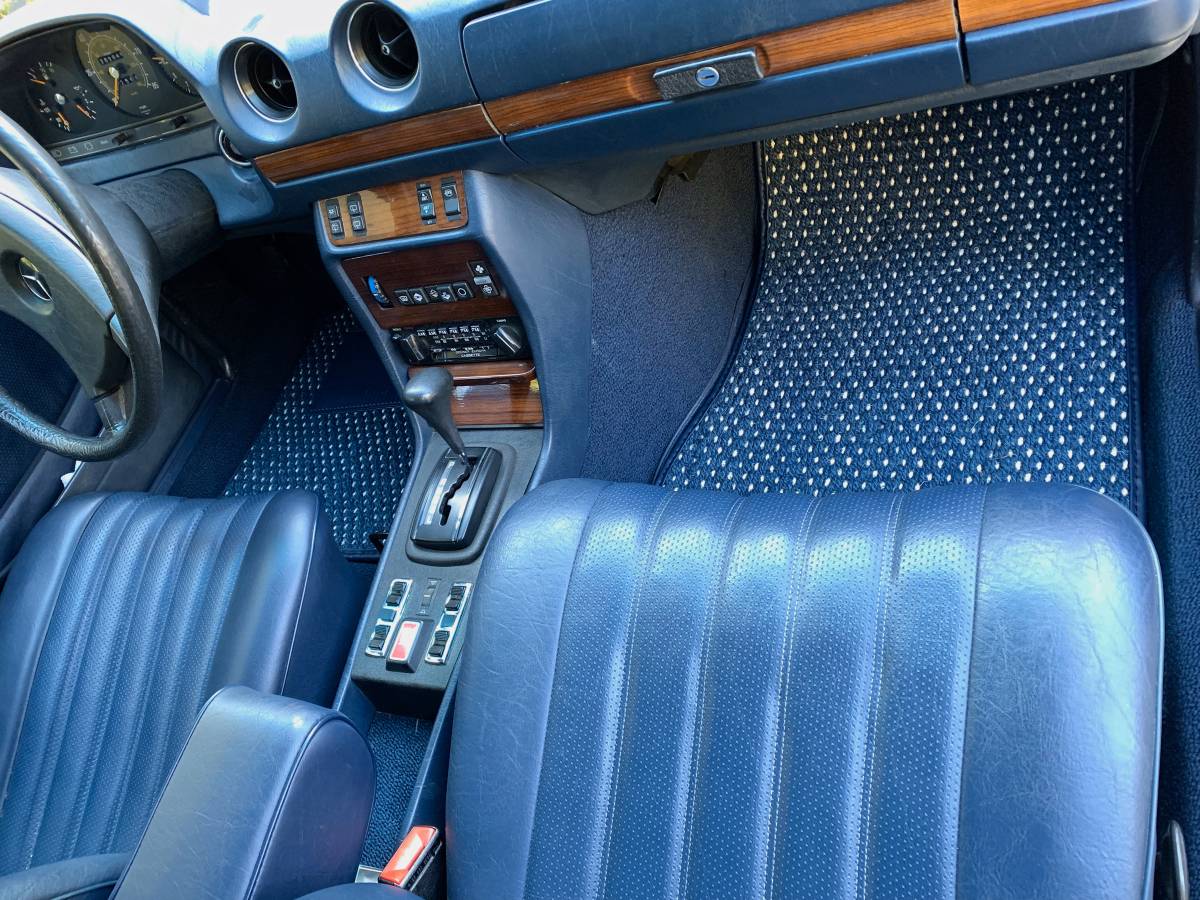 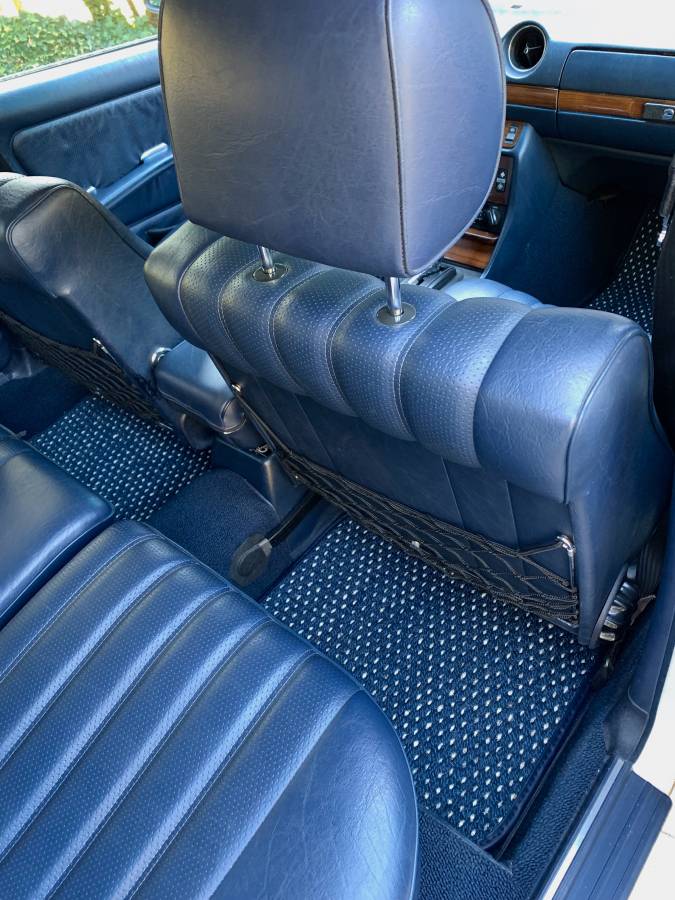 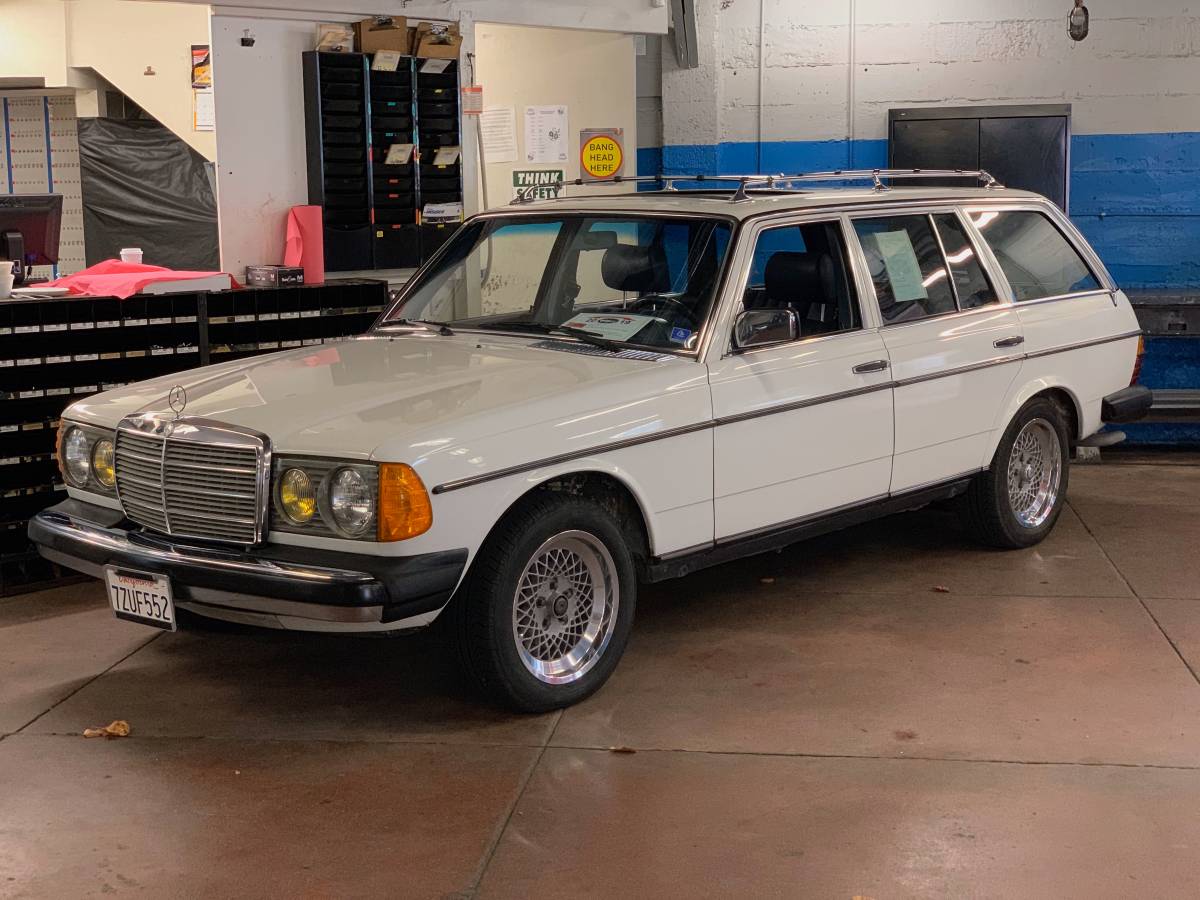 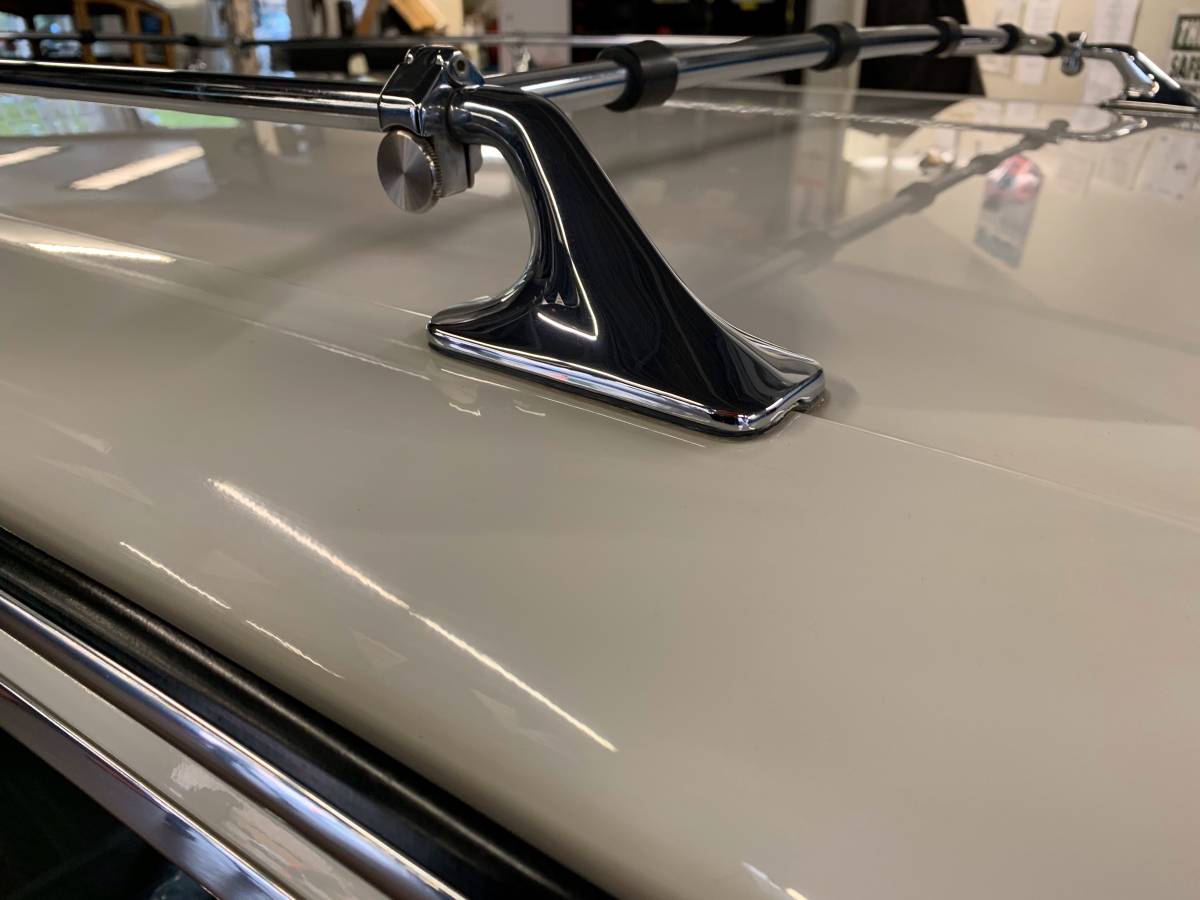 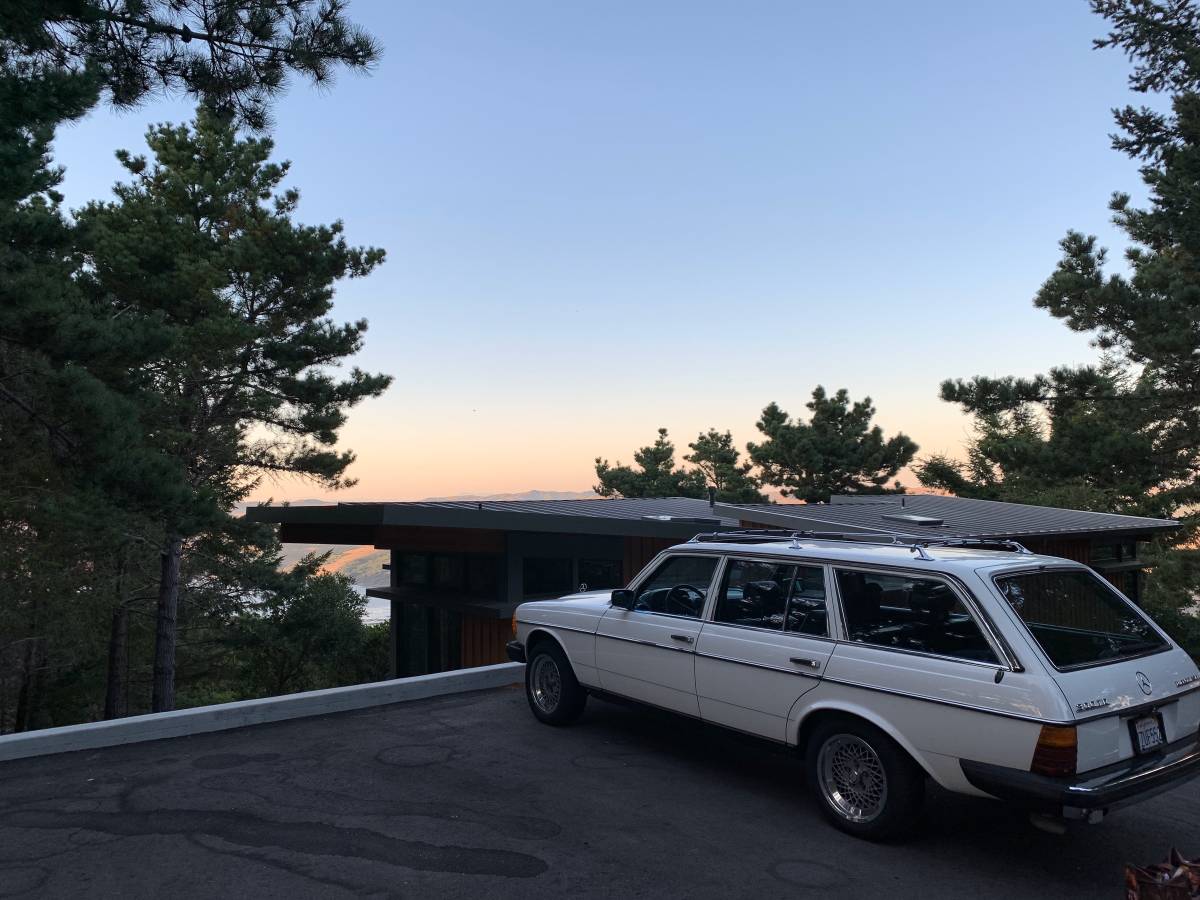 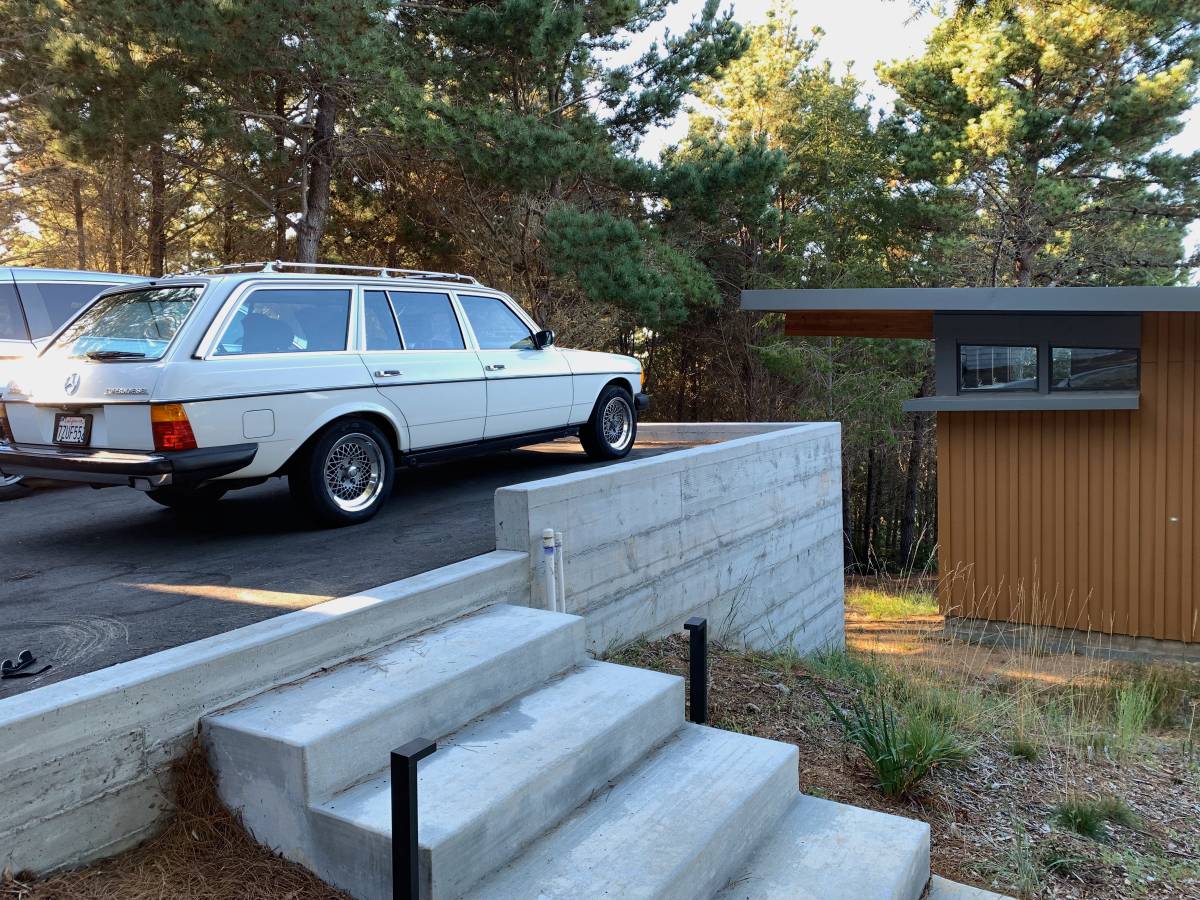 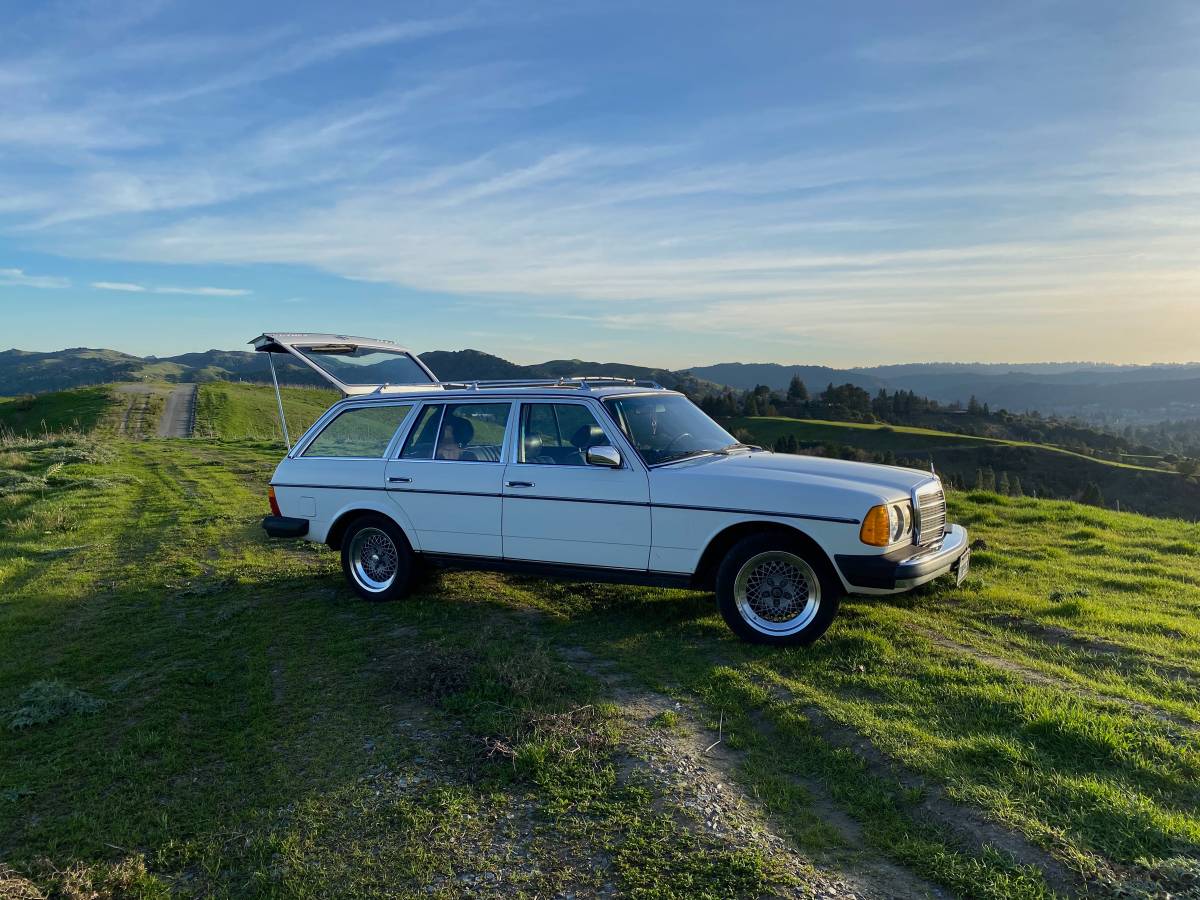 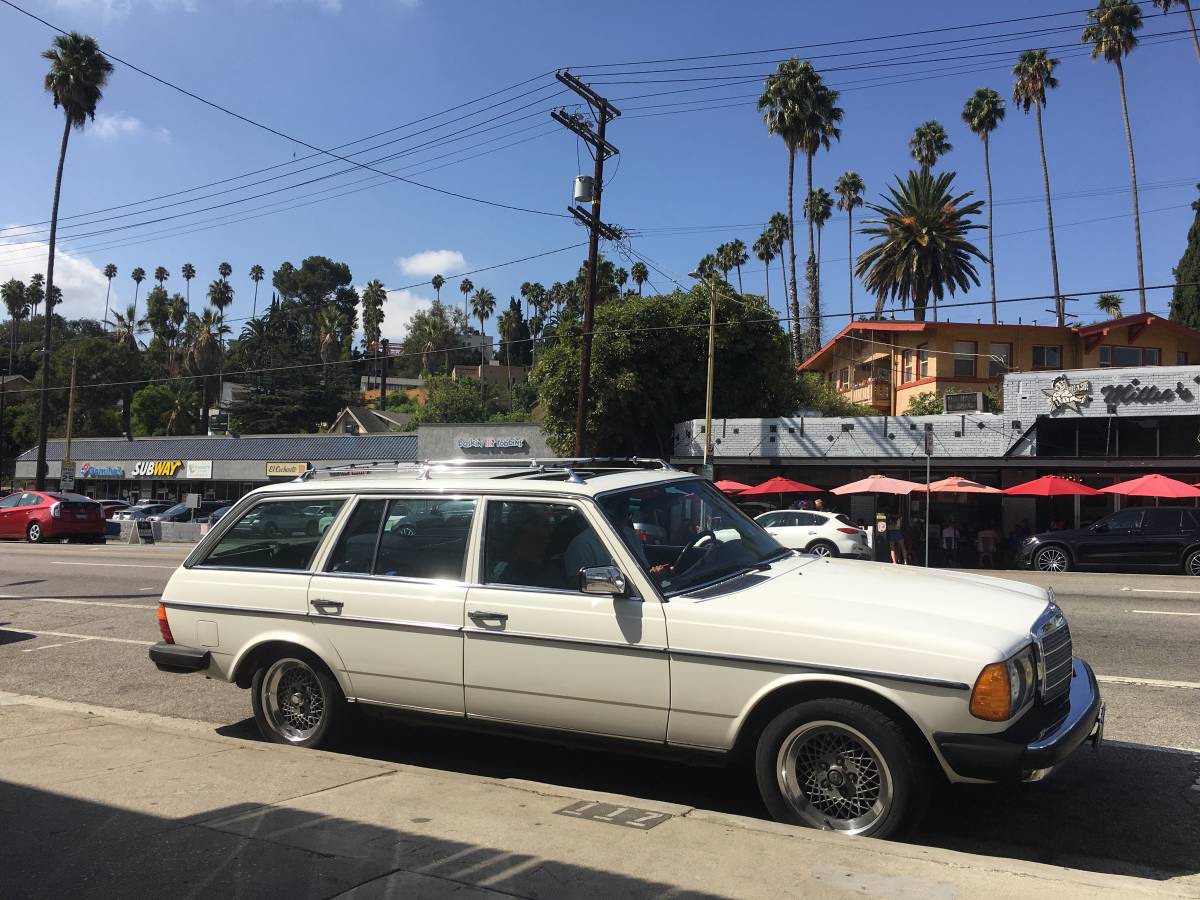 February 17, 2021 Update – we confirmed the seller of this “Classifind” deleted their listing, so we’re now able to call this one “SOLD!” While this one got away, please reach out either by email or call Rudy directly if you’d like to be informed when we come across something similar.

Arguably one of the most frequent cars we’ve featured on Wagon Wednesdays since the start of Guys With Rides is the W123 version of Mercedes-Benz. Particularly the 300TD Diesel-powered Estate (technically known as the S123).  This latest 1981 white over a blue example from California originally listed on Craigslist in February 2021 is easily the finest example we’ve featured to date, not only for its condition that belies its 210,000 miles traveled but for the excellent pictures and description provided by the current caretaker of their wagon. The current caretaker has their 300TD priced at $34,000 firm. Comparing that price against the Hagerty Insurance Online Valuation Tool confirms the private seller has their W123 Estate priced between this guide’s #2 “Excellent” estimate of $33,400 and its #1 “Concours” appraisal of $51,800.

In its Valuation Tool, Hagerty Insurance Provides a great synopsis of the W123 Mercedes:

“By the admission of Mercedes-Benz, the W123 platform was not revolutionary, but “rather a thoroughly mature mid-range car combining the latest engineering with tried and tested design features”. This sober summary reflects the lasting legacy of the W123 – a solidly built automobile with timeless poise and class.

Introduced in 1976, the W123 platform included a four-door sedan and sleek coupe. The W123 replaced the aging W114 and W115 platforms (also known as the “Stroke Eights”), which at the time were the most successful Mercedes passenger cars to date. The incoming W123s were styled after the new S-Class, which was a clear break with the classical style of the Stroke Eight. The W123 offered a longer wheelbase, a wider track, and a larger body. The 280C coupe was 85 mm shorter than the sedan, and was absent a B-pillar, which lent the car a unique and sporty style. The coupe and sedans were soon joined by the diesel-powered 300TD station wagon in 1978 – the first Mercedes wagon. The cars were immensely popular and less than a year into production many dealers had a 12-month waiting list. Cars for immediate purchase were offered in a sort of black-market – at a healthy premium. The station wagon, or “touring” as it was called by Mercedes, was on a backlog of three years by the 1980s. This is a testament not only to the popularity of the touring, but also Mercedes’ creation and then domination of the luxury or “lifestyle” station wagon market.

In the U.S., the W123 was available in all three body styles, but due to stricter emissions regulations, a limited range of engines. The naming convention was straightforward, with the first two numbers representing displacement in liters and the letters representing body style and fuel. No letters indicate a carbonated engine (i.e., the 230 carried a 2.3-liter inline four available from 1977-78), D for Diesel, E for fuel injection, T for touring or station wagon, and C for coupe. The 300D (3.0-liter inline 5-cylinder diesel) was available with a turbocharger in 1981, and labeled as such. Top of the range was the 280E and 280CE, both of which featured 2.8-liter, inline 4-cylinder, fuel-injected engines capable of 142 hp.

The W123 platform came equipped with many optional and standard class-leading features. The car was better engineered for crash protection – accomplished with a strengthened passenger cage and reinforced roof. Optional was a safety steering column engineered to crumple rather than enter the cabin in a head-on collision. From 1980 on, the W123 offered optional anti-lock brakes as well as an optional air bag after 1982. The 1982 model year also marked a major facelift for the W123 – all models were equipped with rectangular broadband headlights and power steering was offered standard across the range.

When the W123 went out of production in 1986 it had surpassed the Stroke Eight as the bestselling Mercedes-Benz with more than 2.5 million cars sold. Mercedes built the car to last, and many are still on the road today. As a testament to the car’s longevity, it is popular in Africa as a bush taxi, covering thousands of miles of rough roads with only basic maintenance. The 3.0-liter inline 5 diesel in the 300D, while lacking in power, is considered to be one of the most reliable engines ever built. The timeless design is sure to last as long as the car itself, making this car a classic that is here to stay.”

The Old Benz Club YouTube Channel provides this video containing great vintage footage of the S123 when it launched in 1978:

“We recently migrated to Asheville from Northern California. The reality is I need a vehicle that I can drive year-round without fear of damaging. My gorgeous, vintage Mercedes w123 wagon has never seen snow or salt, and seldom been out in the rain. I’m the second owner, and before December 2020, had never left the state of California – in fact, it’s still registered there. You can get a true Cali-car: absolutely no rust or corrosion, without dealing with having it shipped out (it’s currently in my garage here in Asheville).

A car in this condition routinely sells on the likes of Bring A Trailer (www..com) for 30-37k. It is fully documented, right down to receipts for wiper blades and oil changes. The climate control system works, and the A/C has been professionally converted over to R134a. The Pirelli tires are about a year old, and are wrapped around impossible-to-find ARC-RIAL wire mesh rims (wheels are worth 2500 alone). Less than 1000 miles ago, I installed new brake rotors, pads, and calipers (all OEM MBZ parts).

This car is ready to make a cross country trip tomorrow, and needs nothing.

With just shy of a quarter of a million miles logged, there are a few cosmetic blemishes, but this car is truly *truly* rust-free. The inline 5-cylinder turbo diesel runs like a top; barely broken in. Fluid changes have been performed religiously for the car’s entire life, as evidenced by the extensive service records.

Previous owner had the self-leveling rear suspension components rebuilt/replaced, at great expense, so that all works perfectly. For the uninitiated, the wagon’s road manners and ride height are maintained regardless of how much weight (people, cargo, or both) are in the back.

The transmission has four forward gears, and has a known “issue” dating back to the 1990’s, where the shift from 3rd to 4th is “soft” or “slow” when the transmission is cold. Even Mercedes-Benz doesn’t recommend fixing it, because it’s a common issue that is just a minor annoyance.

The car has the original Becker radio in working condition, and no modifications inside or out. It appears to have its original windshield, too!

It pains me to sell this car; I love it so much. But, the reality is that it’ll mostly sit in the garage and it deserves to be driven. My 34,000 asking price is firm. You’ll understand why when you see the car.

I’m not interested in any trades, and don’t need help selling it. To test drive, you will need proof of insurance that covers its replacement value (it’s currently insured with Hagerty with an assessed value of 41,000). And I won’t necessarily sell it to you just because you have the money – I want it to go to the right person – someone who’ll enjoy it and preserve this remarkable example of German automotive design and engineering.

Please include your phone number – I may not respond if you don’t – as don’t have time for scammers or BS artists!“

Show or go: what would you do with this 300TD Estate?  Comment below and let us know!