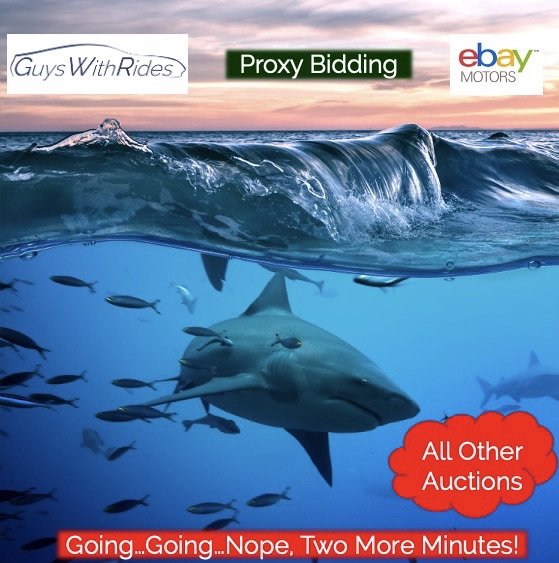 Don’t Believe The Hype: The Two-Minute Rule Plays on Bidder’s Emotions and Fears

Mar 2021 | Auction Observations, Under The Hood

“Sniping” is a technique bidders use on eBay to win a desired item by placing the highest bid during the very last few seconds of an auction other bidders cannot respond to. When Bring a Trailer (“BaT”) launched their collector car auction format in 2014, they elected to use a classic “English” auction format, where each bidder enters a single bid and the process progresses higher until no one is willing to go any further.  As a way to combat the perceived Sniping problem with eBay auctions, rather than use a fixed ending time for their events, BaT established a two-minute “Going, Going, Gone” rule whereby any bid submitting during the last two minutes of an auction automatically adds another two minutes to the clock.  The process continues until no one submits any bids.  All other online collector car auction newcomers to this point trying to model BaT’s success followed suit with a similar format.

Here’s the thing:  despite eBay being around now for over 25 years (can you believe that?!), the vast majority of consumers falsely assume eBay works in a similar fashion.  The reality is eBay provides what’s known as proxy bidding which effectively makes their website a modified second-price, or Vickrey, auction.

eBay developed a modified version of the Vickey auction by implementing proxy bidding to mimic the sealed bid aspect.  What is proxy bidding?  Unlike BaT and all of the other current collector car auctions, to bid on eBay, you don’t have to sit in on an auction 24 hours a day, 7 days a week, manually upping your bid every time someone bids against you. You can make your high bid by proxy in an eBay auction. By proxy means that eBay’s automatic-bid feature stands in for you so that your bid rises incrementally in response to other bidders’ bids.

When you enter a proxy bid on eBay or a Max Bid Guys With Rides, each system actually makes several small bids — again and again — until the bidding reaches the maximum amount you specified, but only up to the amount needed.  If bidding on a collector car starts at $1,000, for example, and you put in a maximum of $15,000, both eBay’s and Guys With Rides systems enter bids automatically on your behalf to increase incrementally so that you stay ahead of the competition, at least until someone else’s maximum bid exceeds yours (at that point, both systems gives you the option to enter a new proxy bid). To mimic the sealed bid aspect, both eBay and Guys With Rides hide the maximum proxy bids entered, so no one else knows for sure whether you’re bidding automatically or your maximum bid and vice-versa.
Here’s a simple example of two bidders.  Like most eBay users, Sam makes one bid at a time in response to other bidders while Rudy enters one proxy bid of $15,000, i.e. the most he is willing to pay for the car. Sam starts the bidding at $1,000 and the minimum increment in this example is $1,000. 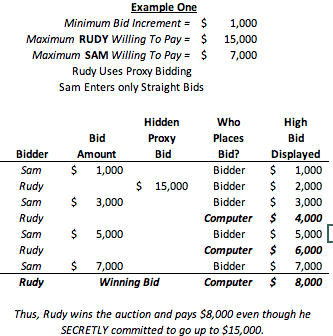 Now let’s look at how two bidders who leverage Max Bidding on Guys With Rides might play out.  In this example, the minimum increment is $1,000 and Sam enters a proxy of $7,000, the most he is willing to pay for the car: 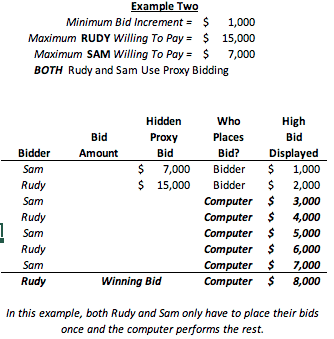 In this example, since both Rudy and Sam leveraged the Max Bid feature, each person ended up entering only one bid and Guys With Rides’ system handled the rest.  So, if understood properly and used effectively, savvy eBay and Guys With Rides bidders can use a high proxy/max bid in the final minutes of the auction as a way to stave off any Snipers.

Our Max Bid feature provides you the flexibility to enter the maximum you are willing to bid ahead of time. Just set it and forget it!

When they launched their auctions, Bring a Trailer convinced everyone their two-minute rule is a great way to prevent sniping.  We disagree and believe Max (proxy) bidding is superior for four key reasons:

With eBay’s proven system reliably in place now for 25 years, they must be onto something. That combined with the advantages stated above over time-extended auctions is why Guys With Rides offers the Max Bid functionality on every auction we offer.