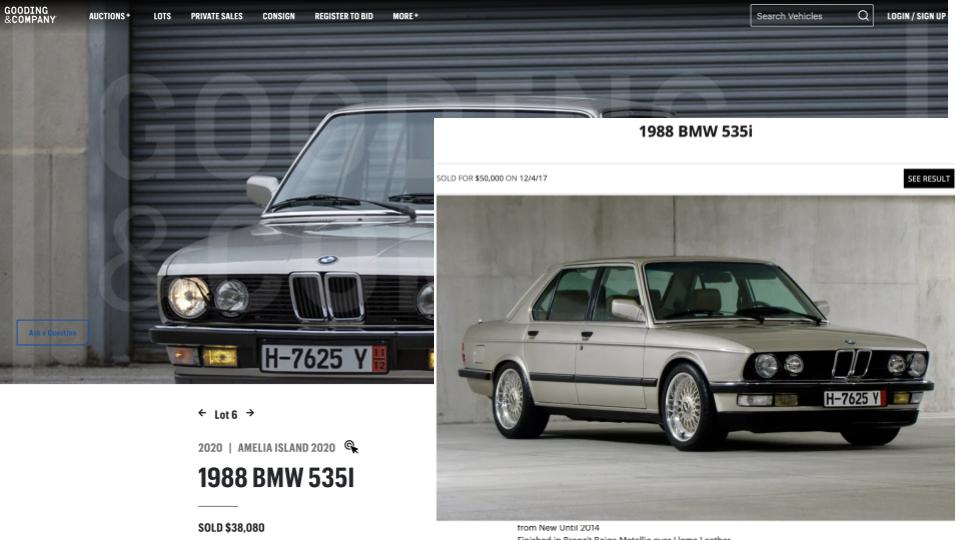 Hardly a week goes by when we don’t shake our heads over the ridiculous prices being bid for what are otherwise everyday used cars on Bring A Trailer.  Read comments you can find outside of their site and you’ll find many former fans getting disenchanted by the number of former BaT auction cars being resold on the site less than three years later. The dirty little secret: Bring a Trailer has become a great price to sell your ride, but it’s no longer the site to find cars “well bought.” More troubling is when the new owner tries to sell their BaT purchase any place but on that site.  The results can be very disappointing to them, but in fact, are market correct outside of the Bring A Trailer bubble.

A prime example we came across is this stunning, Concours-Winning 1988 BMW 535i that originally sold on Bring a Trailer on December 4, 2017, for a staggering $50,000. At the time, that was M5-money for a final-year 535i, albeit a stick-shift model that was Q-Tip clean. Tack on BaT’s five percent buyer’s fee and the new owner paid a total of $52,500 for their Bimmer.

Unfortunately, in yet another example of how BaT’s two-minute rule plays on the Endowment Effect of the past winning bidders, what likely could have been a winning bid of around $37,000 at 4:00 pm ended up dragging on an extra forty minutes when “DrewTee” had the high bid of $50,000: 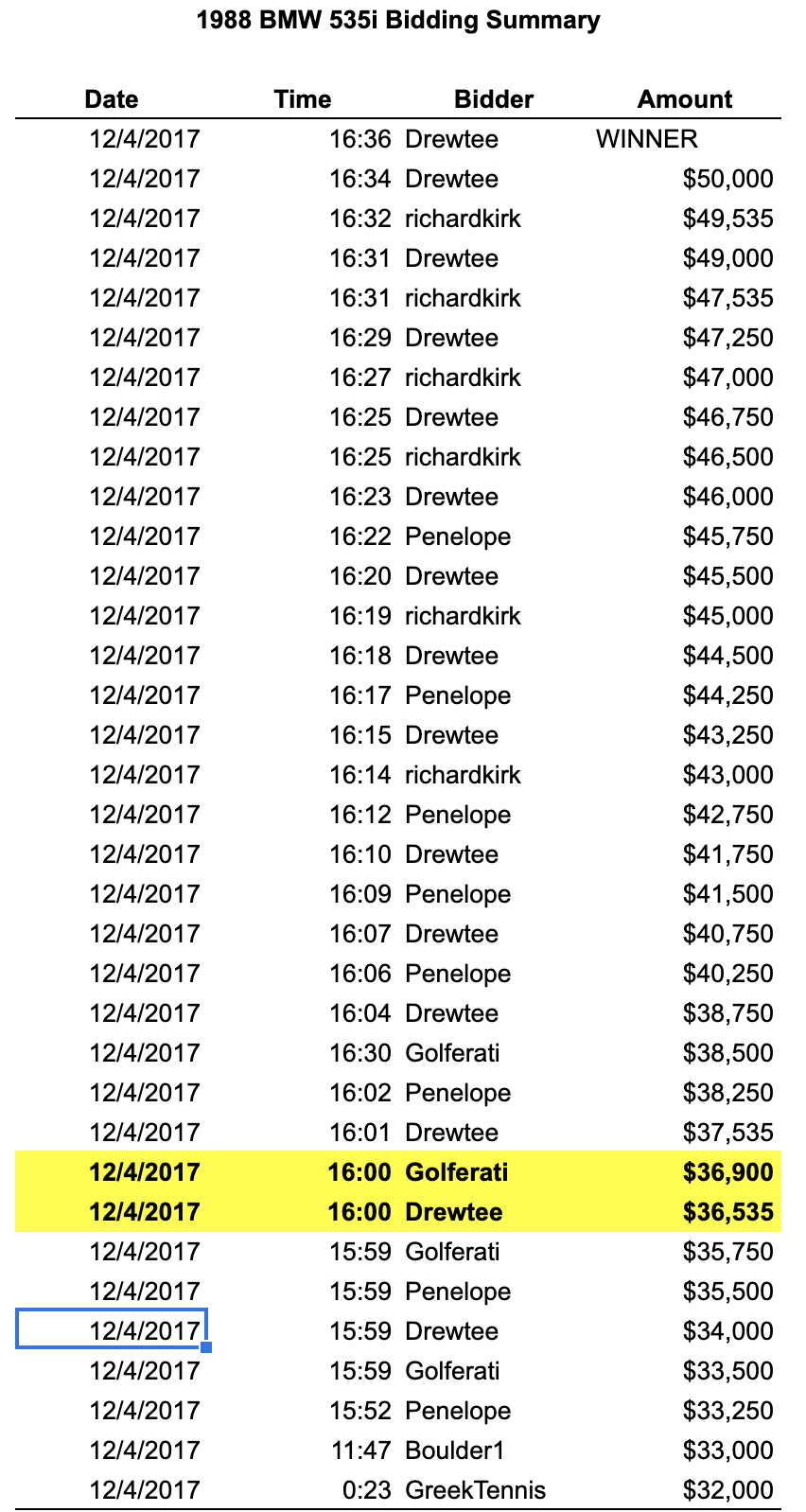 While we don’t know what either DrewTee’s or the other ending bidders’ maximum bids might have been had BaT offered automatic bidding, it’s safe to assume they would have been much in line with the bids offered at 4:00 pm than forty minutes later. We were a bit concerned to see a new bidder “richardkirk” join in only after the auction’s overtime began, however, it’s clear from their BaT bidding history they were interested in finding this vintage of BMW 5-series at the time.

Back to Drewtee.  It’s one thing if they paid a “Winner’s Curse” of $13,000 if they planned to keep their new-to-them BMW 535i long-term.  However, fast forward to Friday, March 6 2020 to the Amelia Island Concours weekend. Events held that weekend were the last before full COVID-19 lock-downs went into effect, so the results coming out of this weekend turned out to be strong.

No so much for our BMW 535i in question. For reasons unknown, the aforementioned BaT buyer decided to sell their 535i just two-and-a-half years later. We don’t know whether they were first turned down by Bring a Trailer to relist, so regardless if you want to try and get big money for your Concours-Caliber car, the Amelia Island weekend is usually a great place to try.

Sadly for the seller, that wasn’t the case.  Gooding & Company advertises the 535i “Sold For” $38,000. Unfortunately, Gooding & Company, like other traditional collector car auctions, add their buyer’s premium of ten percent to the final hammer price. Consequently, the winning bid was only $34,000.  Tack on other fees and as well as the shipping costs the seller paid to get the car to Amelia Island, and it’s quite possible the seller barely earned $30,000 for their 535i.

A $20,000 loss in just over two years.  That’s the side of Bring A Trailer no one wants you to see.  Don’t be fooled: remember that the next time you see a record bid on their website.

We’d love to hear your thoughts on this.  Comment below and let us know!