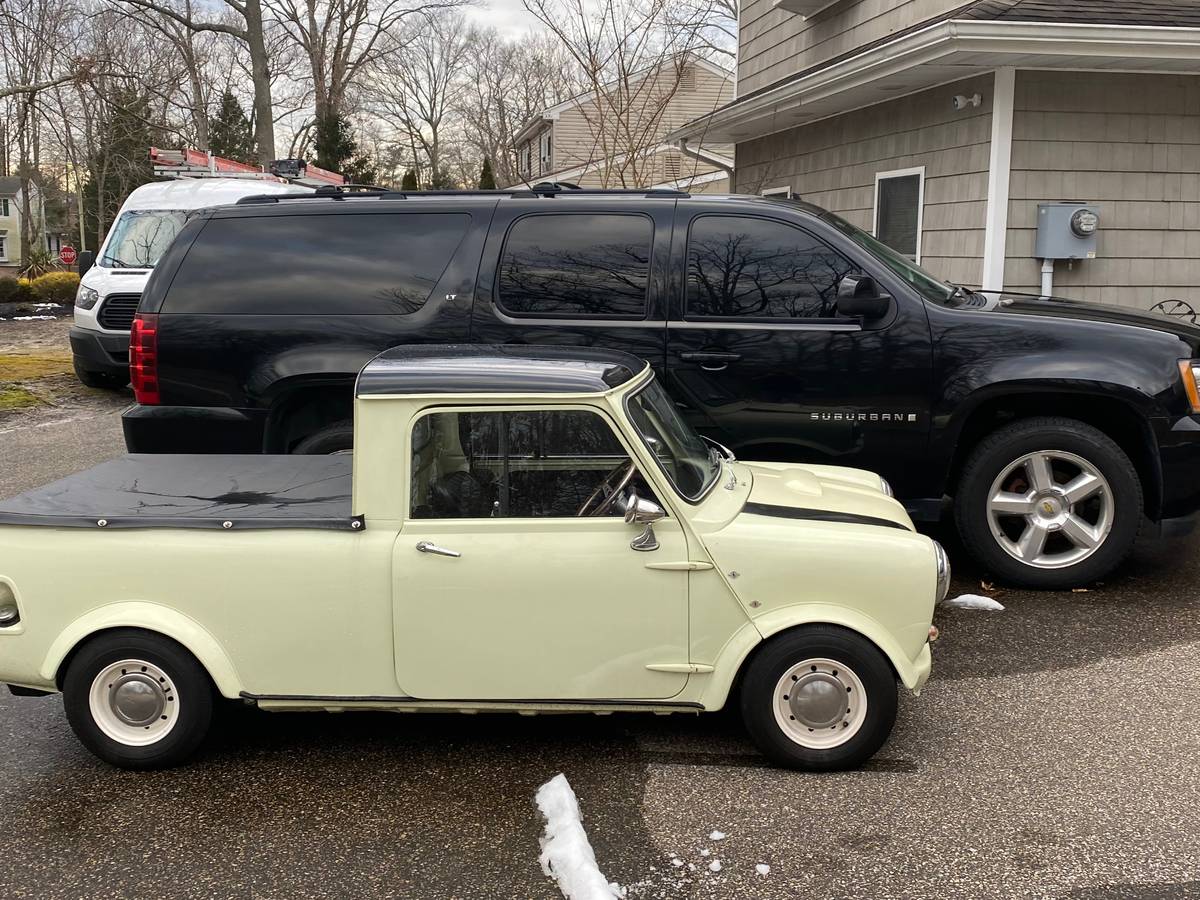 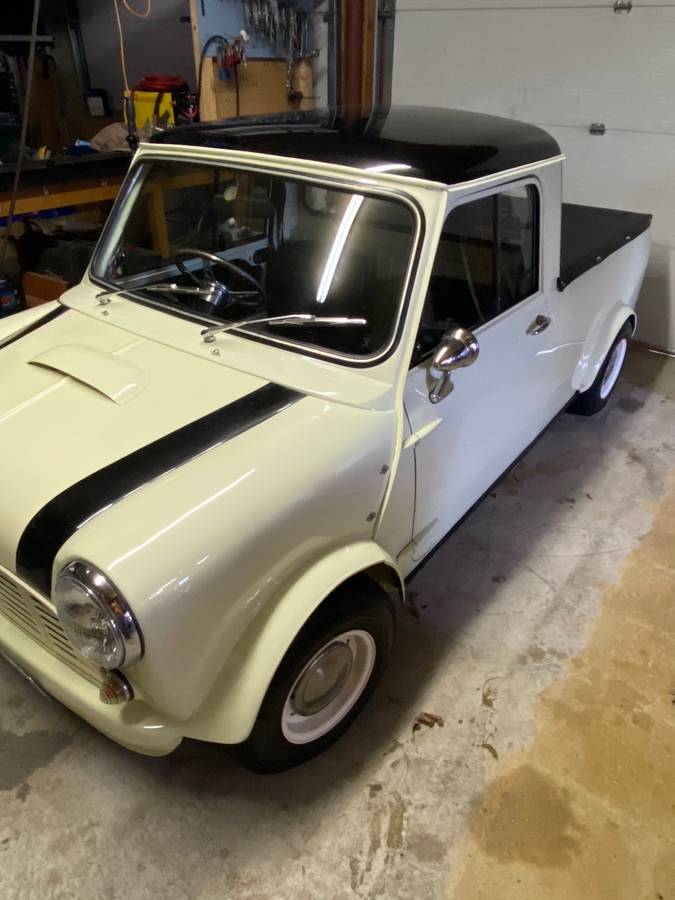 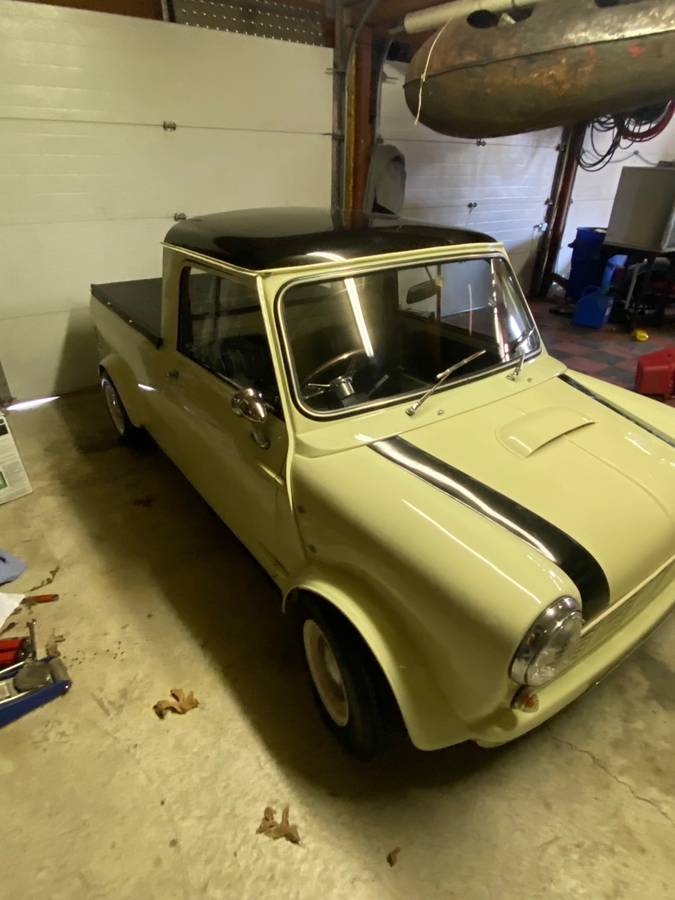 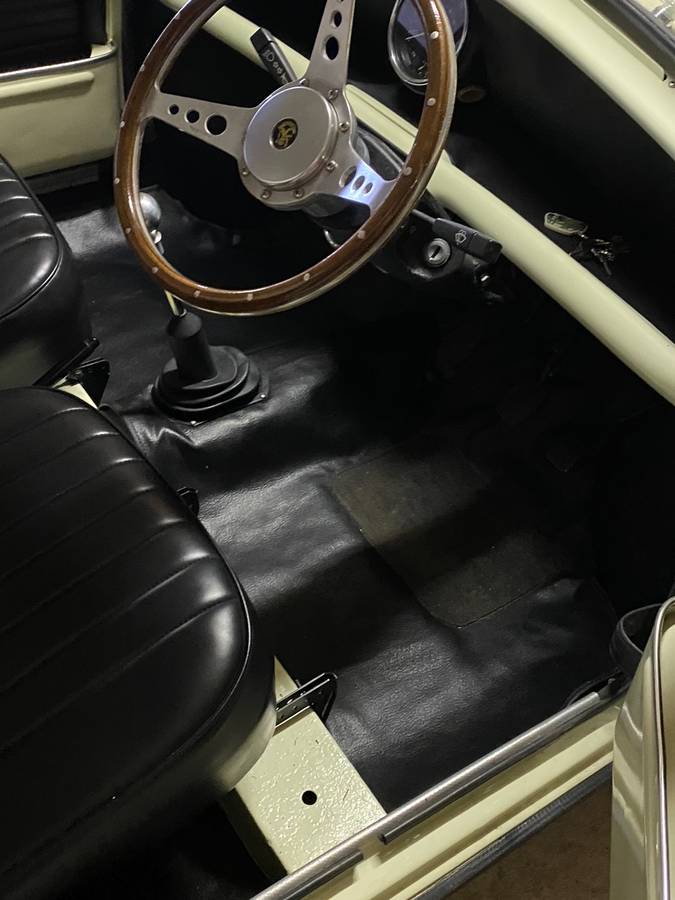 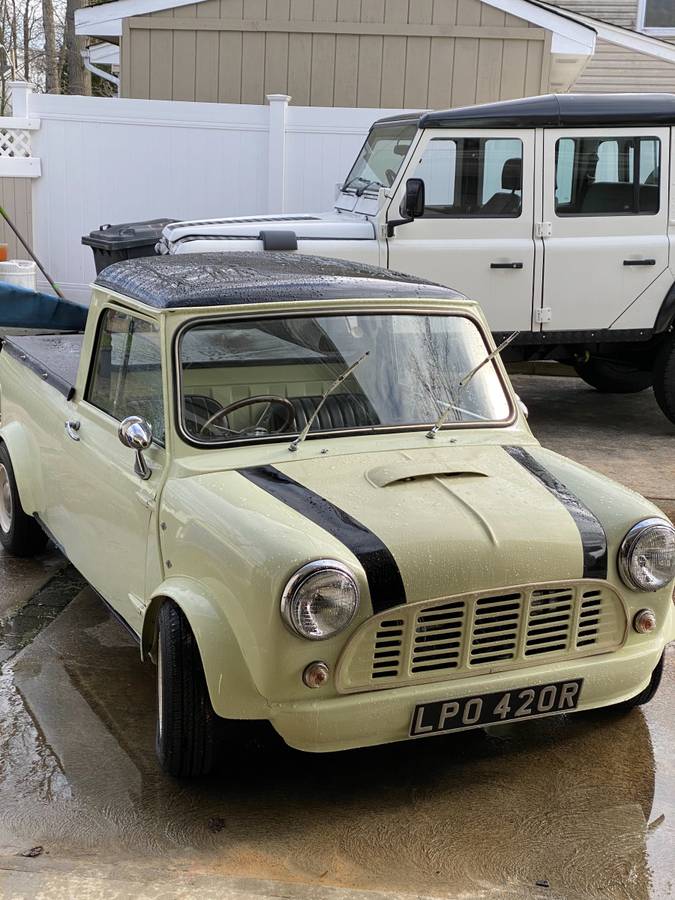 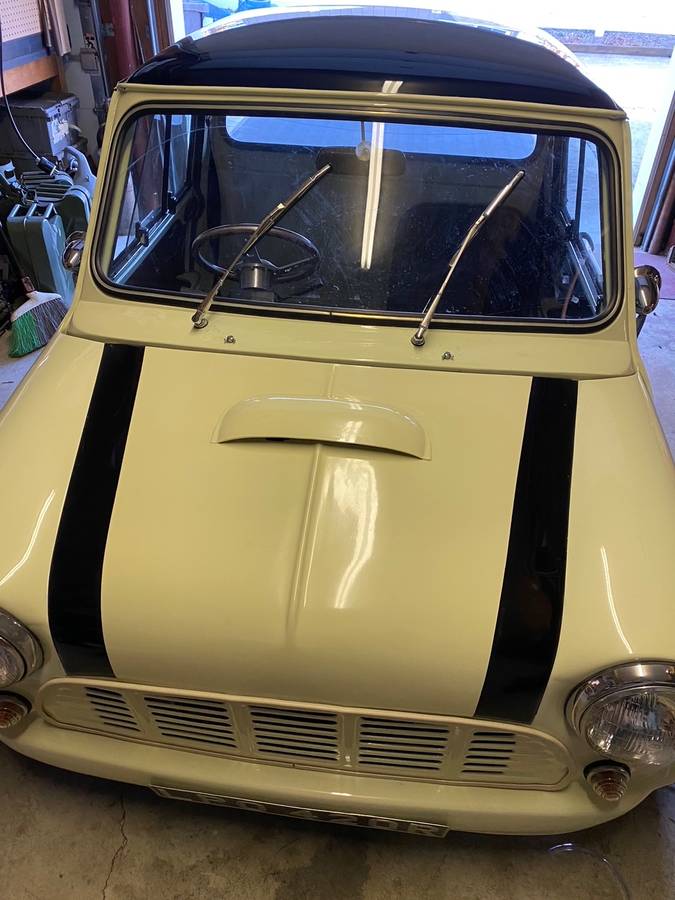 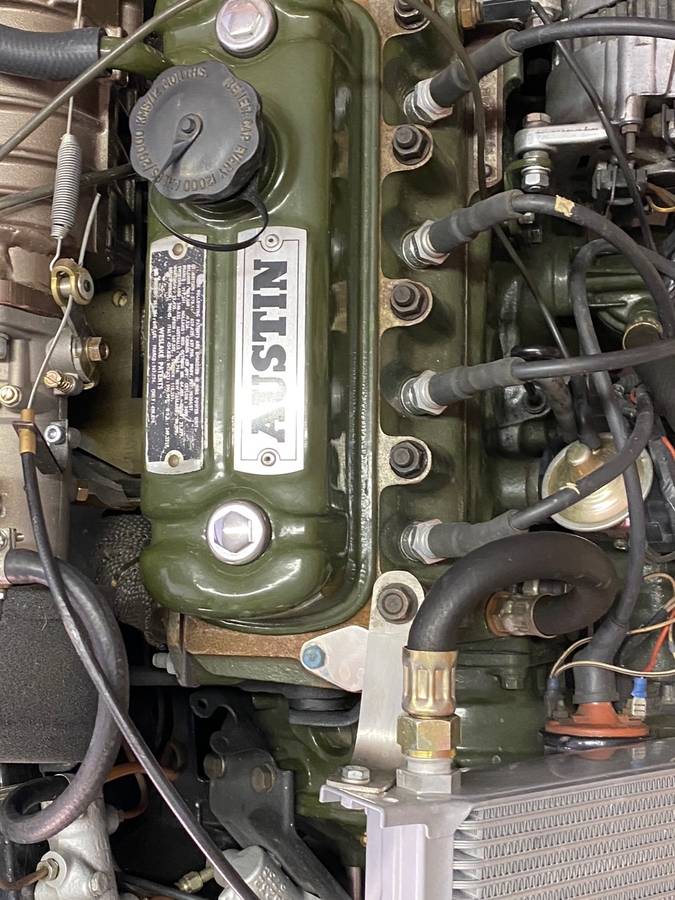 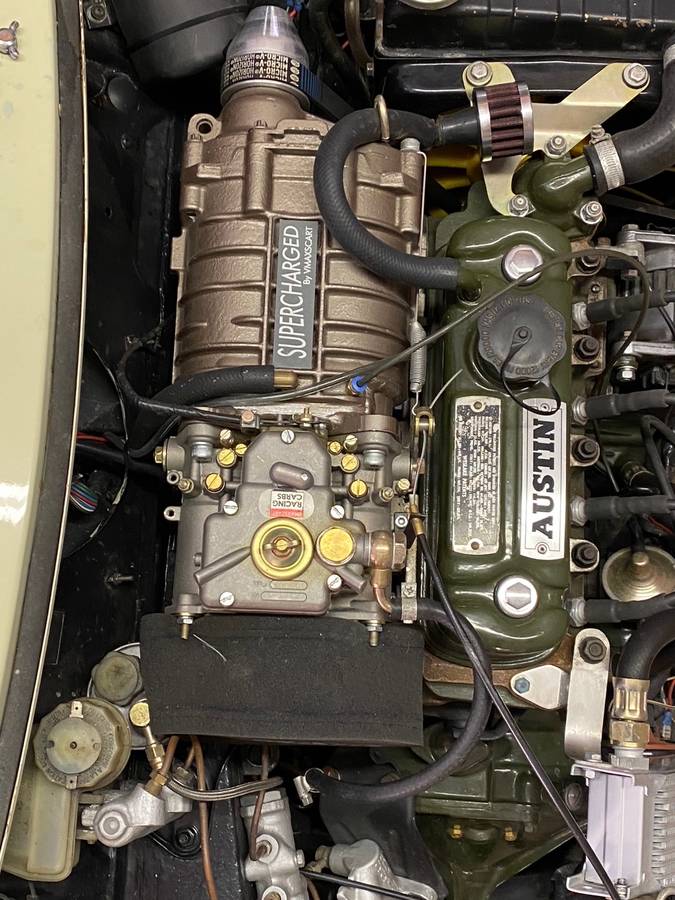 May 31, 2021 Update – We just confirmed the listing for this Mini “Classifind” expired, so with no replacement found we’re assuming this ride “Sold?” While this one got away, please reach out either by email or call Rudy directly if you’d like to be informed when we come across something similar.

This just in from the “Bet You Didn’t Know” department is this restored 1976 Austin Mini Pickup originally listed in April 2021 on Craigslist in Toms River, New Jersey equipped with an upgraded shifter and a horsepower-doubling supercharger for $27,000 currently. Unfortunately, the fact this vintage of Mini was never officially imported into the U.S. means our normal pricing benchmarks cannot provide guidance on whether the asking price is in line with other sales. Even Bring a Trailer has never featured a similar Mini Pickup, so chalk up a first for Guys With Rides!

Austin offered a variety of body variations of its famed original Mini over its 41 years of production.  One of the rarer versions was the pick-up truck, which technically fell into more of the car-based Coupe Utility (Or “UTE” for short) category. At just 11 feet in total length, Austin based the pickup version on the longer Mini Van platform, with an open-top rear cargo area and a tailgate. Austin claimed the weight of the Pickup as less than 1,500 pounds with its seven-gallon fuel tank filled. As with the Van, the Pickup had stamped metal slots for airflow into the engine compartment. The Pickup was basic, although the factory brochure described a “fully equipped Mini Pick-up is also available which includes a recirculatory heater.” Passenger-side sun visor, seat belts, laminated windscreen, tilt tubes, and cover were also available at extra cost.  A total of 58,179 Mini Pickup models were built between 1961 and 1983.

We came across this YouTube-posted video of a similar example of an Austin Min Pickup:

Since these were never officially imported into the U.S., we hope the seller can provide you with the story of how this example made it our shores and when.  While this version of the Mini is rare enough in its own right, we love the fact it’s equipped with a supercharger kit that doubles the horsepower over stock.  Not only can this Mini UTE haul stuff, but it can also haul ass doing it.

“1976 Mini Cooper pickup in excellent condition, only 58,000 were ever produced in the ten years they were made
And most were used as farm trucks and commercial and rotted away, so very few surviving mini pickups are still
Here and even less in the US, this one has a very nice rebuild a few years ago and was stripped down gone through
And painted, engine was rebuilt and a supercharger was added for extra HP approx 90-100 from 40-50hp
A KAD shifter was added for easier shifting and reversing
Due to its size and weight it’s quick and fun to drive and be assured no one you meet has ever seen one.
It has a flip front end and a few spider cracks in the paint. This not a show car and is 45 years old
But can be a show car easily.“

Show or go: what would you do with this restored and supercharged Mini Pickup?  Comment below and let us know!