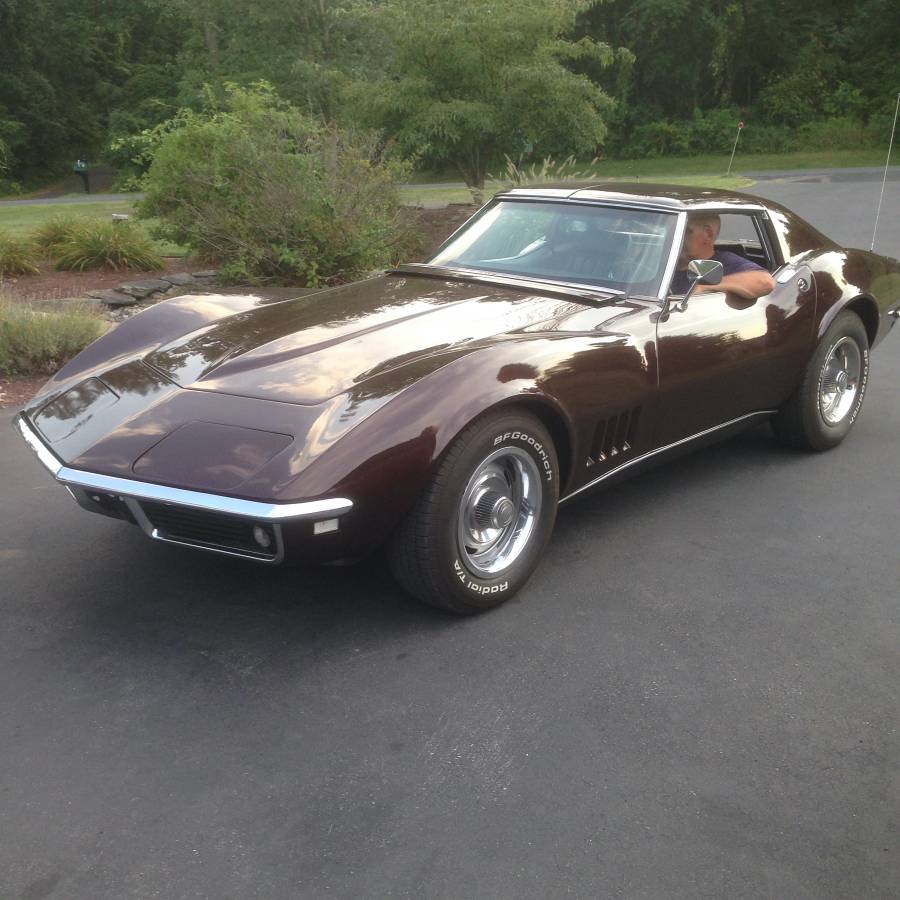 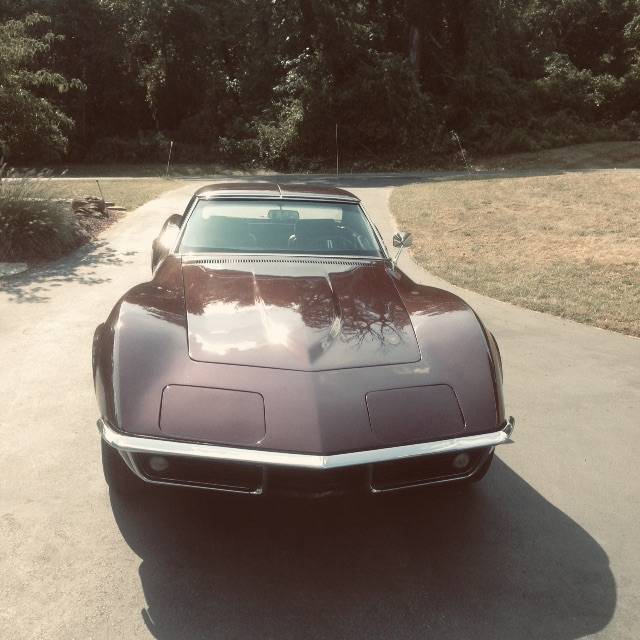 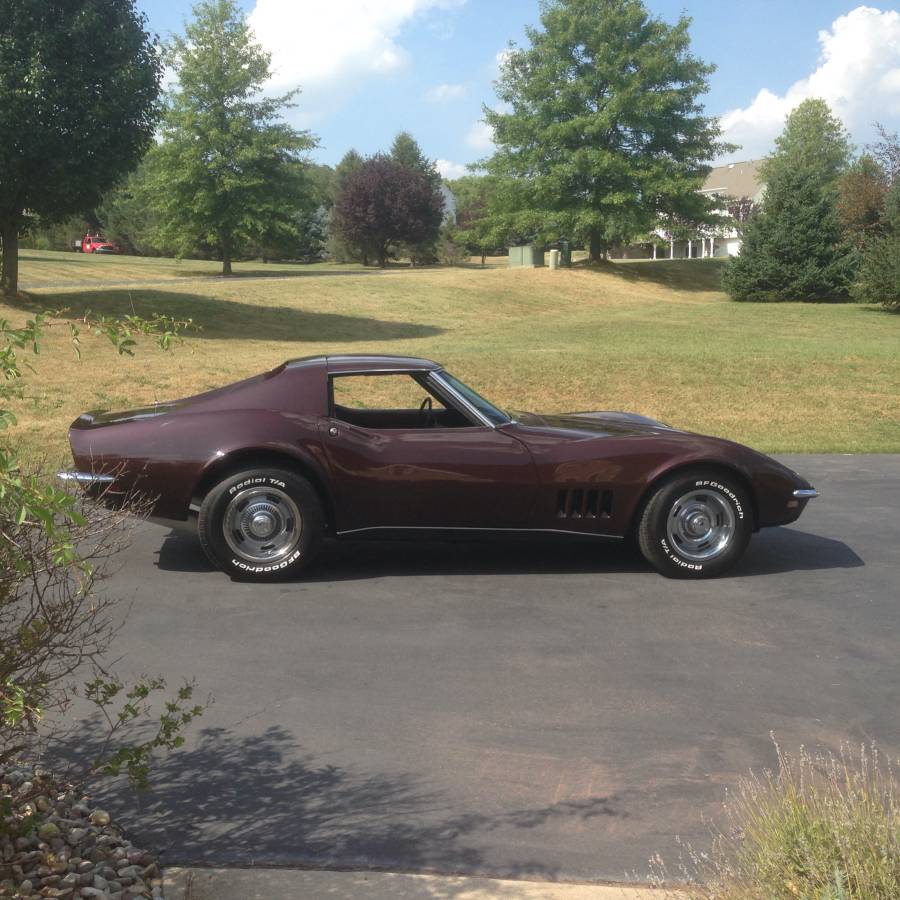 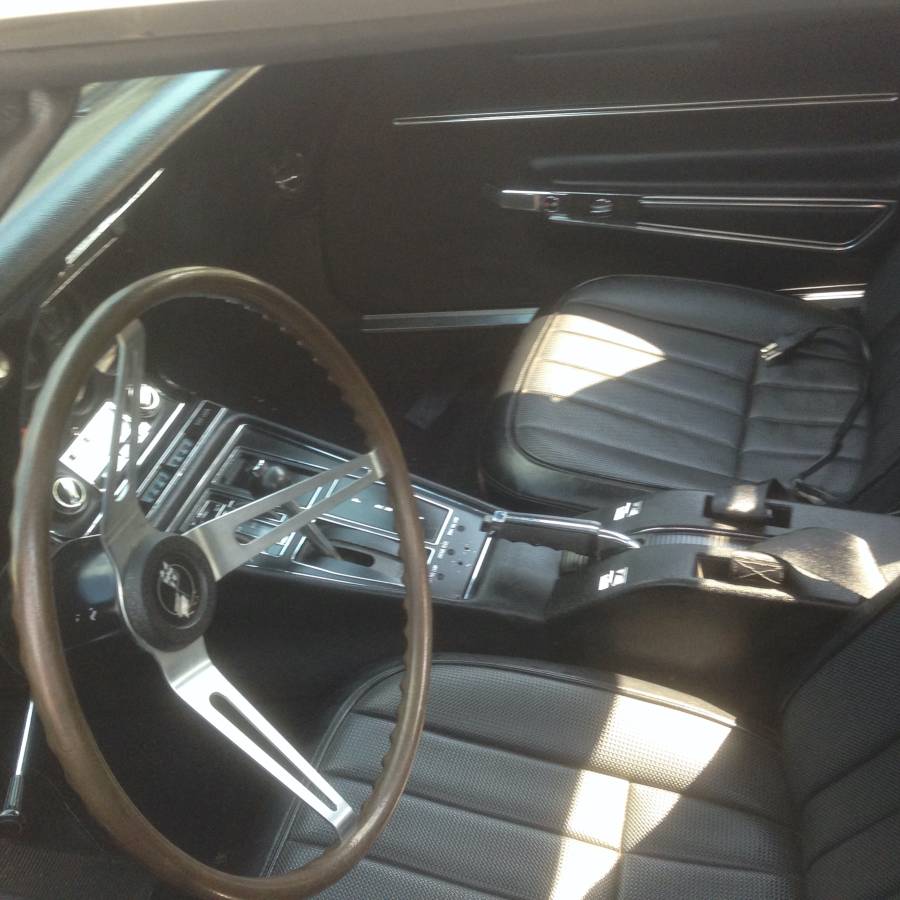 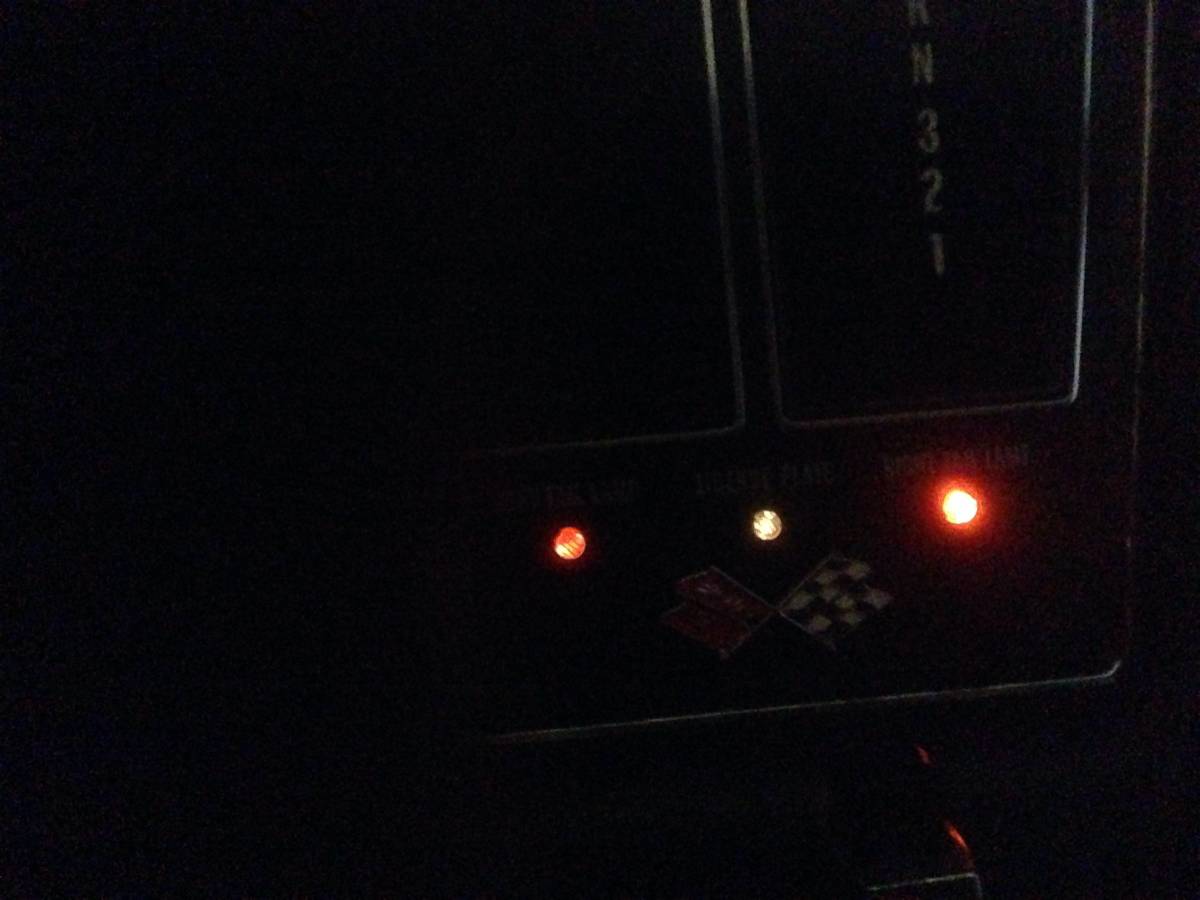 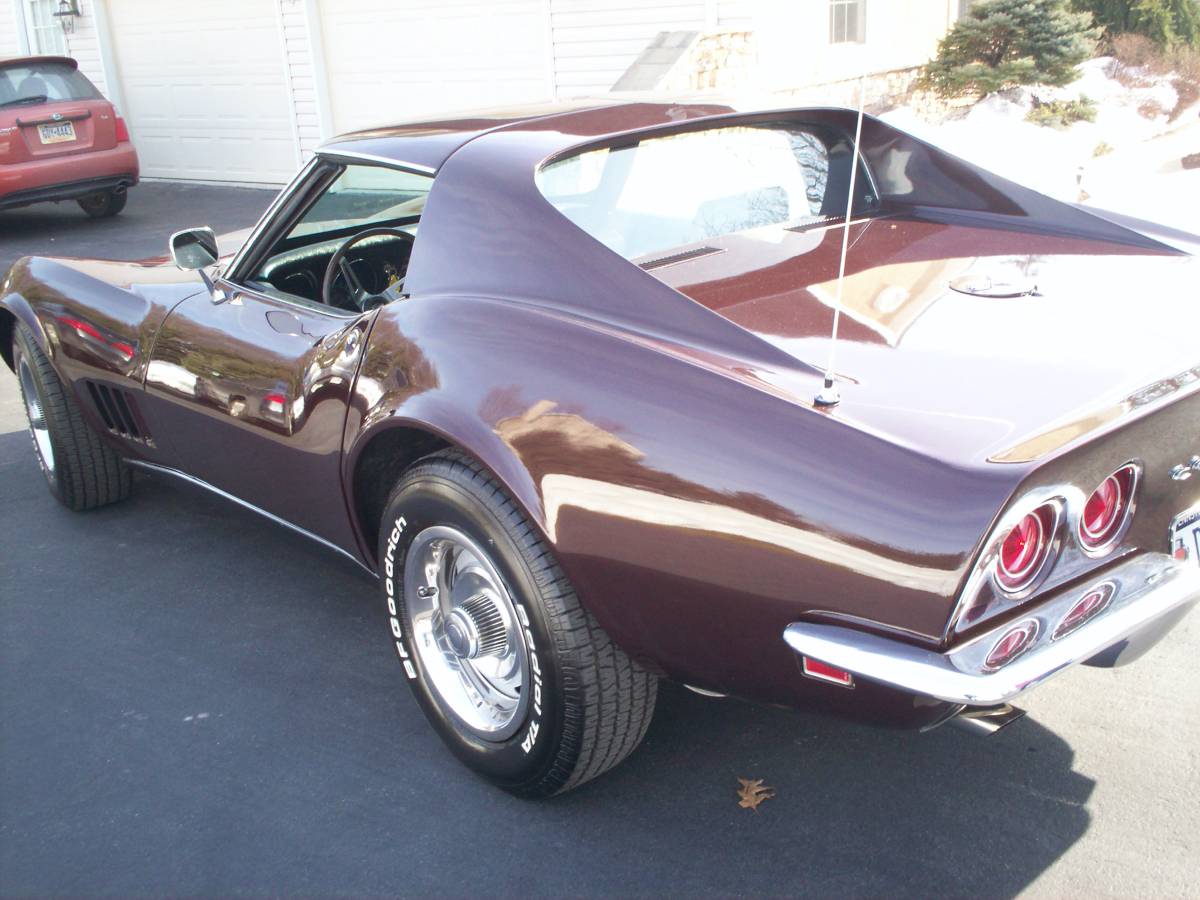 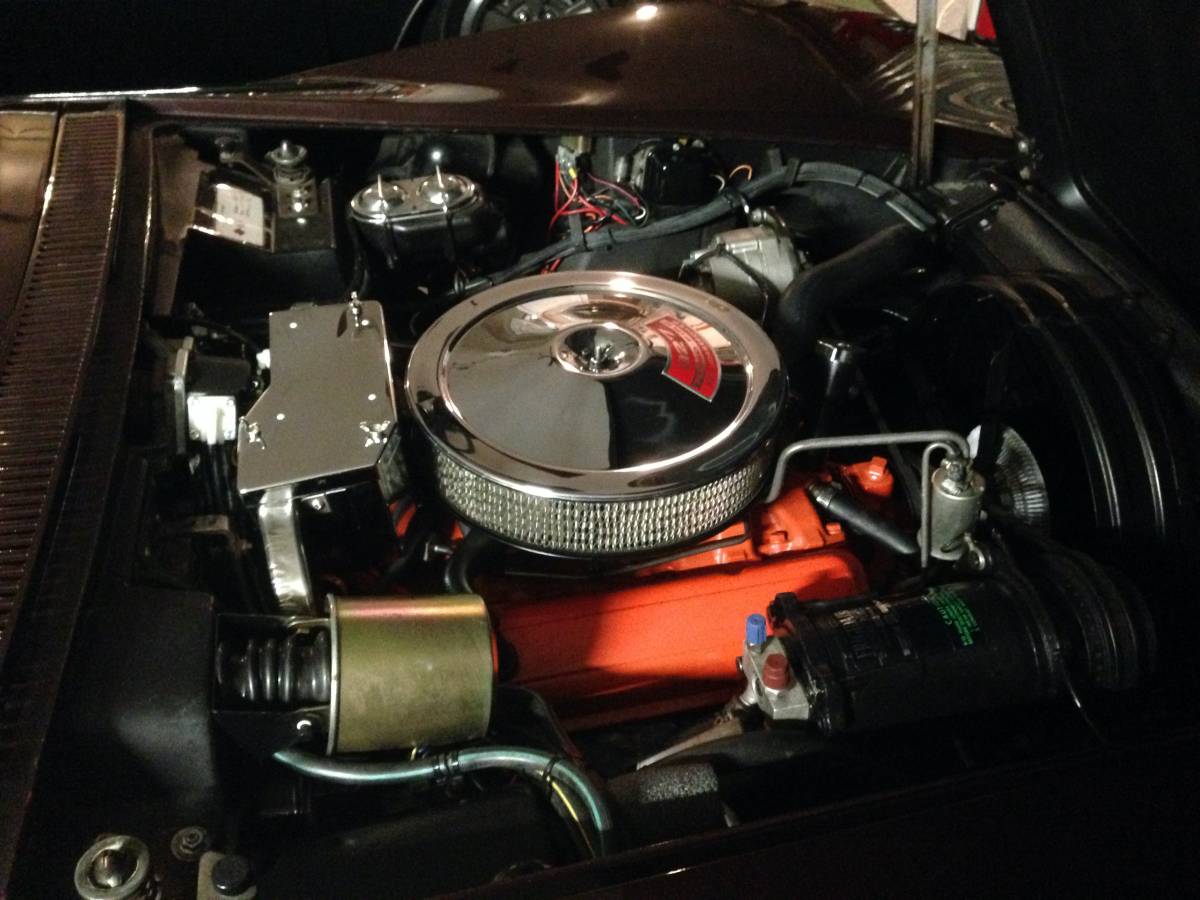 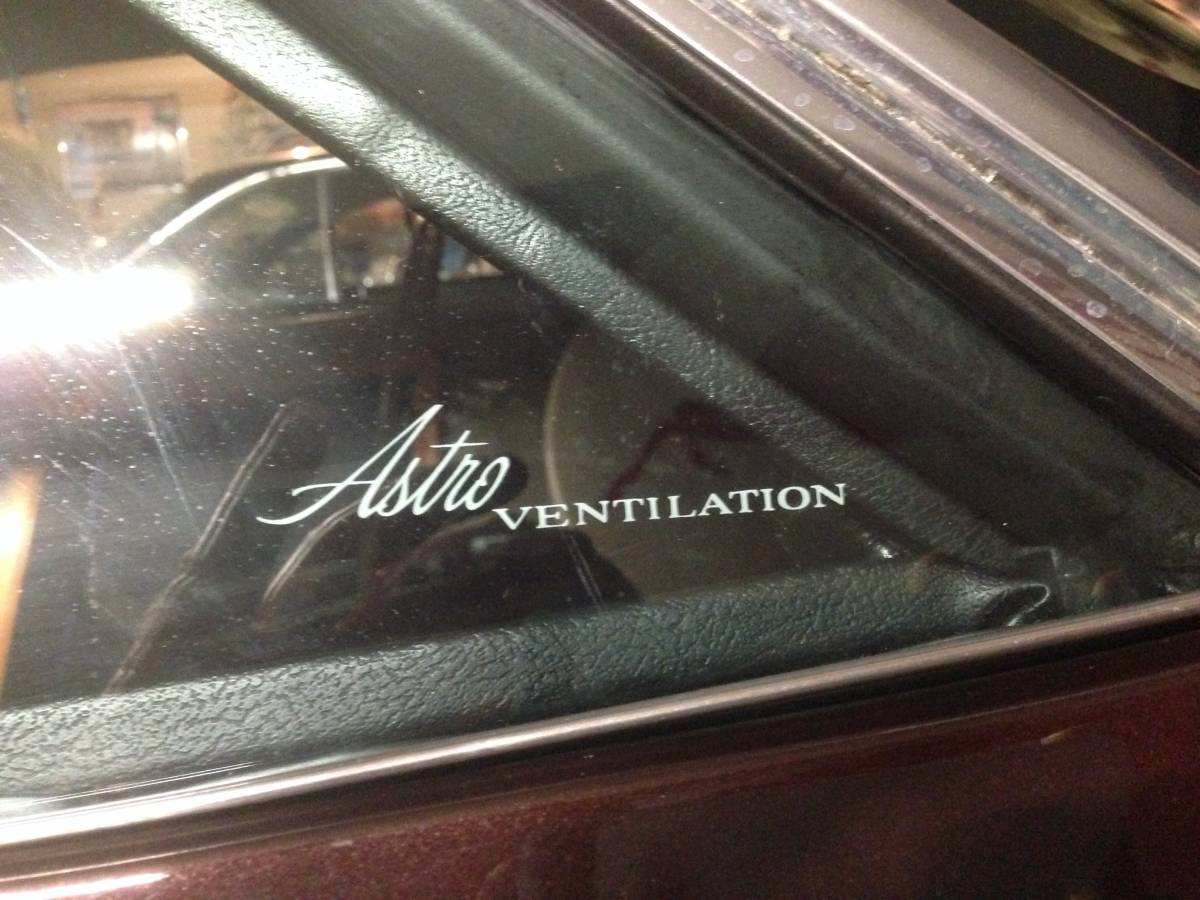 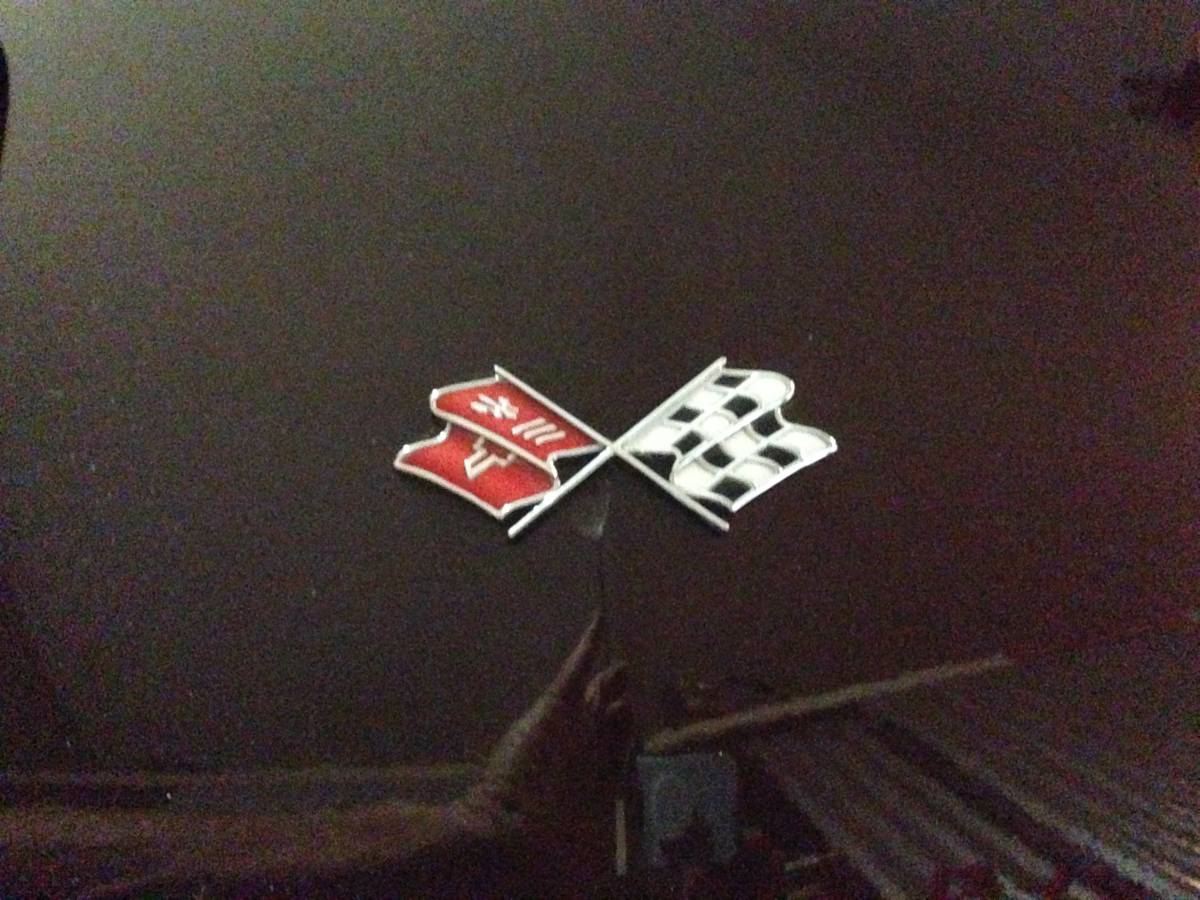 May 7, 2021 Update – we confirmed the seller of this C3 Corvette “Classifind” deleted their listing, so we’re now able to call this one “SOLD!” While this one got away, please reach out either by email or call Rudy directly if you’d like to be informed when we come across something similar.

Here’s a C3 Corvette trivia question you can ask your fellow car enthusiasts as everyone actually gets together again:  What was the rarest exterior color on the 1968 Corvette? Tuxedo Black with only 708 produced.  The second-rarest color? Cordovan Maroon, which makes this ’68 Coupe originally listed in April 2021 on Craigslist in Hellertown, Pennsylvania (Allentown) one of only 1,155 produced in that shade. Reported to feature a numbers-matching 327/Automatic power train as well as air conditioning, the current caretaker mentions this Corvette benefitted from an older restoration that appears to have held up well.  With several recent upgrades, the private seller is now selling their C3 for $20,500 firm.  Comparing that price against the Hagerty Insurance Online Valuation Tool confirms the private seller has their Stingray priced between this guide’s #3 “Good” estimate of $18,500 and its #2 “excellent” appraisal of $32,900.  Interestingly, the  Collector Car Market Review Online Tool reveals the seller’s firm asking price is only one hundred dollars less than this guide’s #3 “Good” estimate of $20,600.

Chevrolet introduced the third generation Corvette (known these days as the “C3” by enthusiasts), patterned after the Mako Shark II concept car, for the 1968 model year. A completed redesigned body and interior sat atop the same fully-independent chassis introduced on the C2 Corvettes.  As before, the car was available in either coupe or convertible models, however, the coupe was now a notchback fitted with a near-vertical removable rear window and removable roof panels (T-tops). A soft folding top was included with convertibles, while an auxiliary hardtop with a glass rear window was offered at additional cost. Included with coupes were hold-down straps and a pair of vinyl bags to store the roof panels, and above the luggage area was a rear window stowage tray. The enduring new body’s concealed headlights moved into position via a vacuum operated system rather than electrically as on the previous generation, and the new hide-away windshield wipers utilized a problematic vacuum door. The door handles were flush with the top of the doors with a separate release button. Front fenders had functional engine cooling vents. Side vent windows were eliminated from all models, replaced with “Astro Ventilation”, a fresh air circulation system. In the cabin, a large round speedometer and matching tachometer were positioned in front of the driver. Auxiliary gauges were clustered above the forward end of the console and included oil pressure, water temperature, ammeter, fuel gauge, and an analog clock. A fiber-optic system appeared on the console that monitored exterior lights and there was no glove box. The battery was relocated from the engine area to one of three compartments behind the seats to improve weight distribution. New options included a rear window defroster, anti-theft alarm system, bright metal wheel covers, and an AM-FM Stereo radio.  All cars ordered with a radio, like the C2 cars, continued to be fitted with chrome-plated ignition shielding covering the distributor to reduce interference.

The Cars And Stripes  YouTube channel currently features this 1968 promotional film of the then-new Corvette:

While we still prefer LeMans Blue, we wouldn’t kick this Cordovan Maroon example out of our fantasy garage. You’ll need to confirm with the seller whether this C3 is equipped with desirable power steering, which would combine with the Turbo Hydramatic automatic transmission and working air conditioning to make this one of the more comfortable C3s to cruise in.  The still functioning fiber-optic system is a good sign the seller and the previous restorer paid attention to the details when sorting this Corvette.

“1968 Corvette for sale. Very nice condition! 327 engine (numbers match), power steering, air conditioning, power windows, auto trans, T tops, removable rear window, all chrome bumpers, chrome is great condition, all-fiber optics work as they should, many new parts. Too many to list. Updated air conditioning, nice and cold. New heater core. The Interior is in great condition. The car has had a frame-off restoration at one time. Body and paint in excellent condition. The paint color is Cordovan maroon. Undercarriage and frame like new. This is a great car for this price. $20,500. *Firm.*“

Show or go: what would you do with this restored Corvette?  Comment below and let us know! 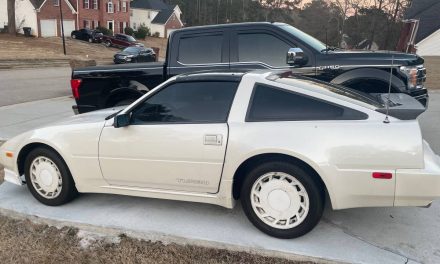 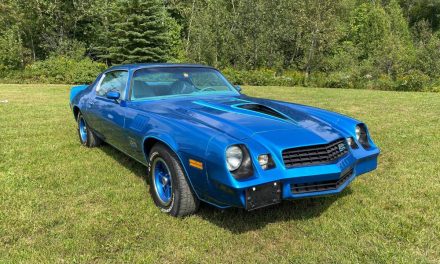 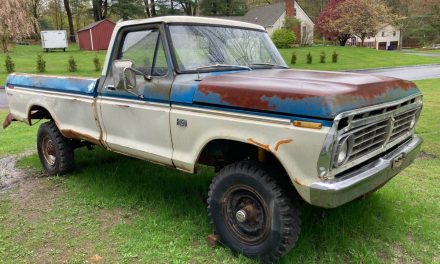