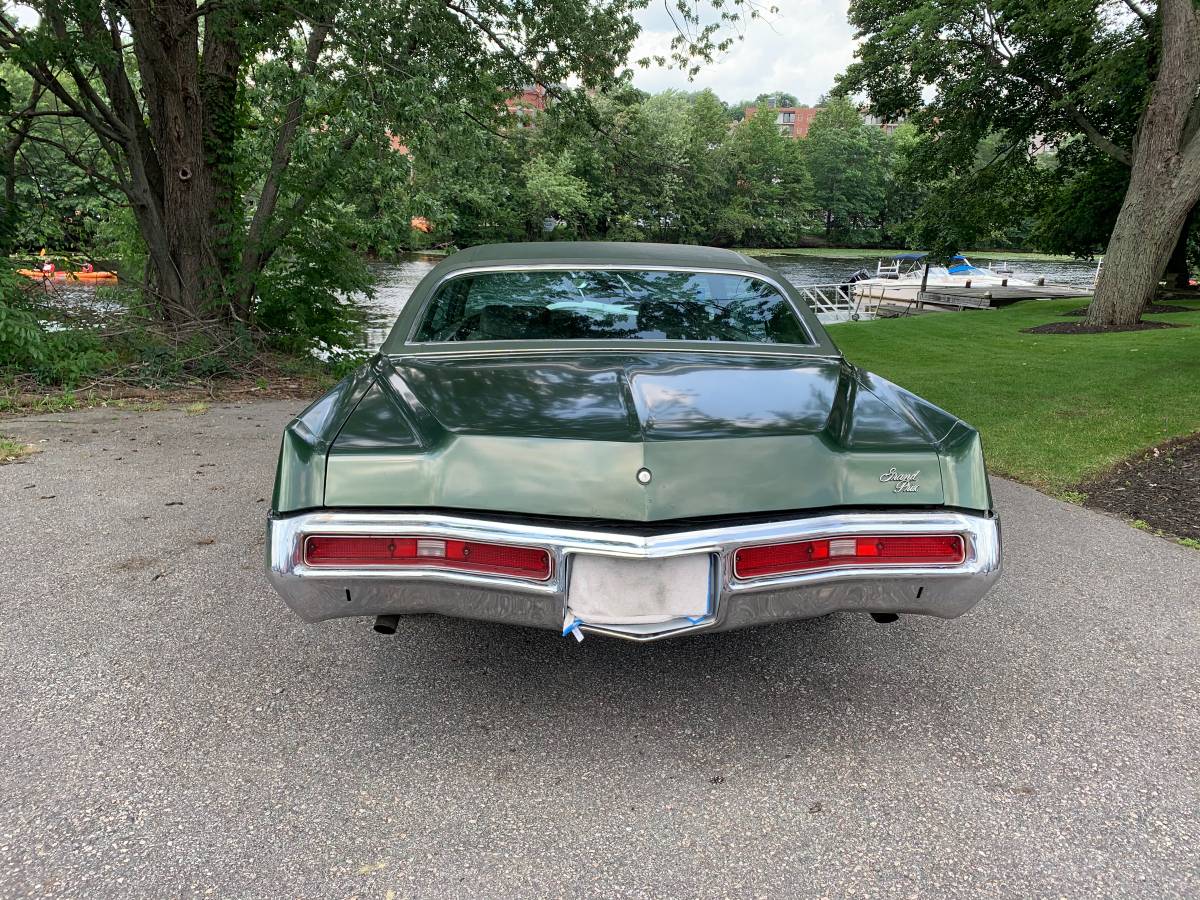 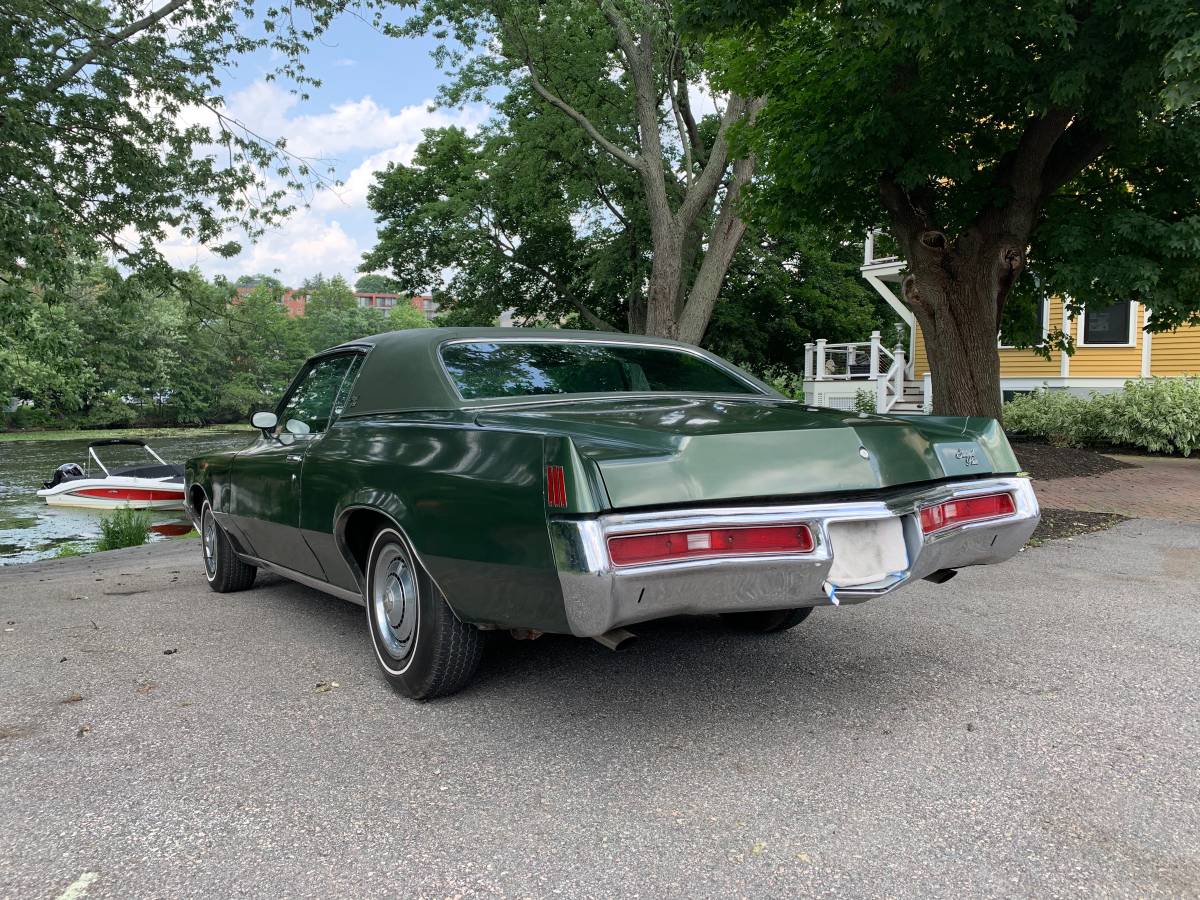 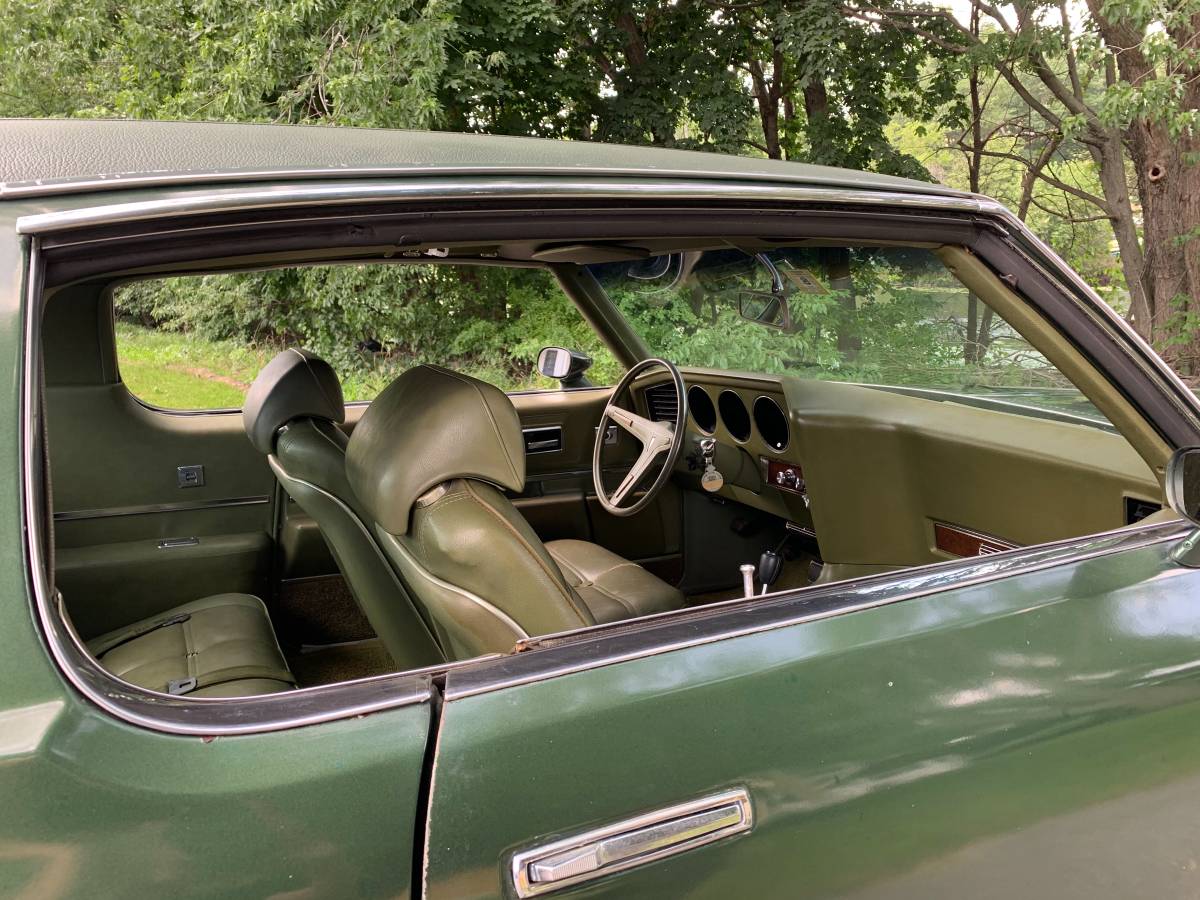 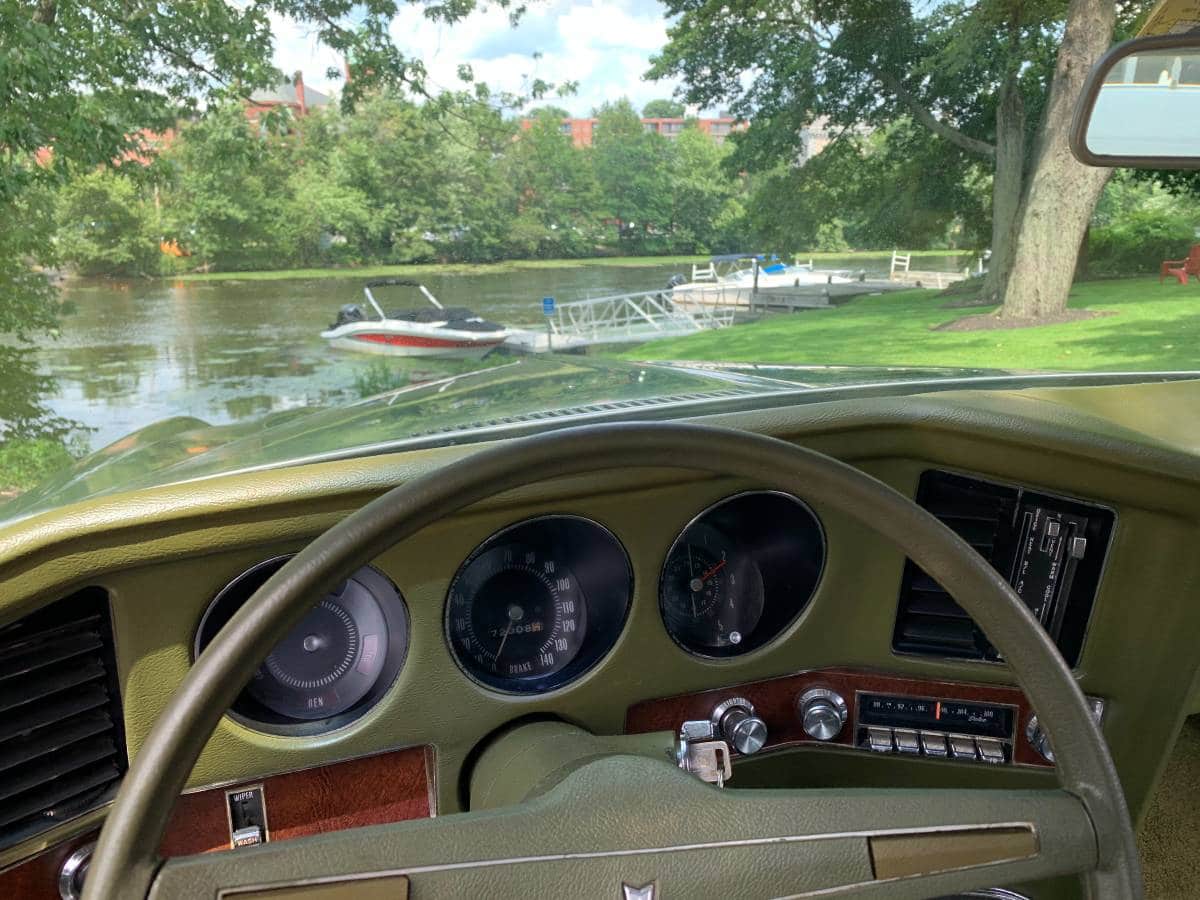 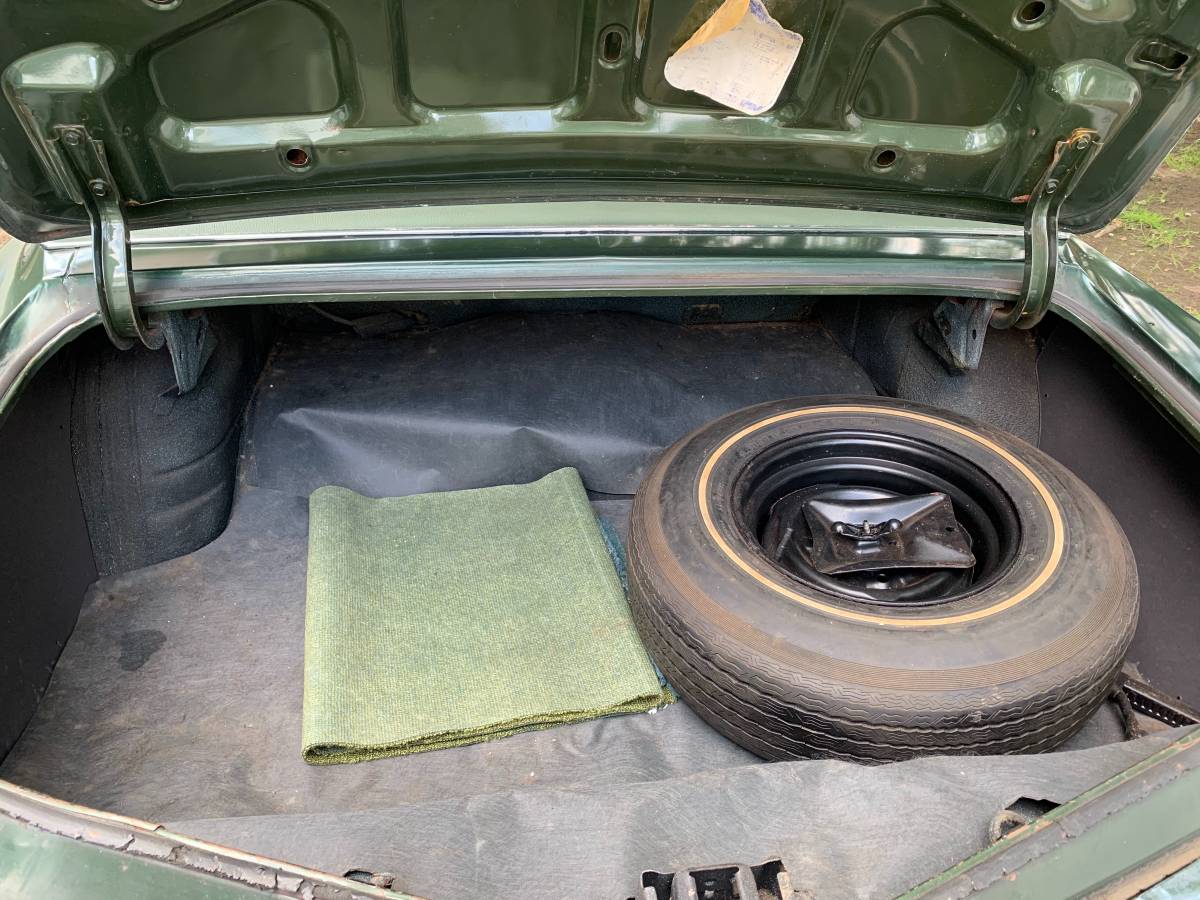 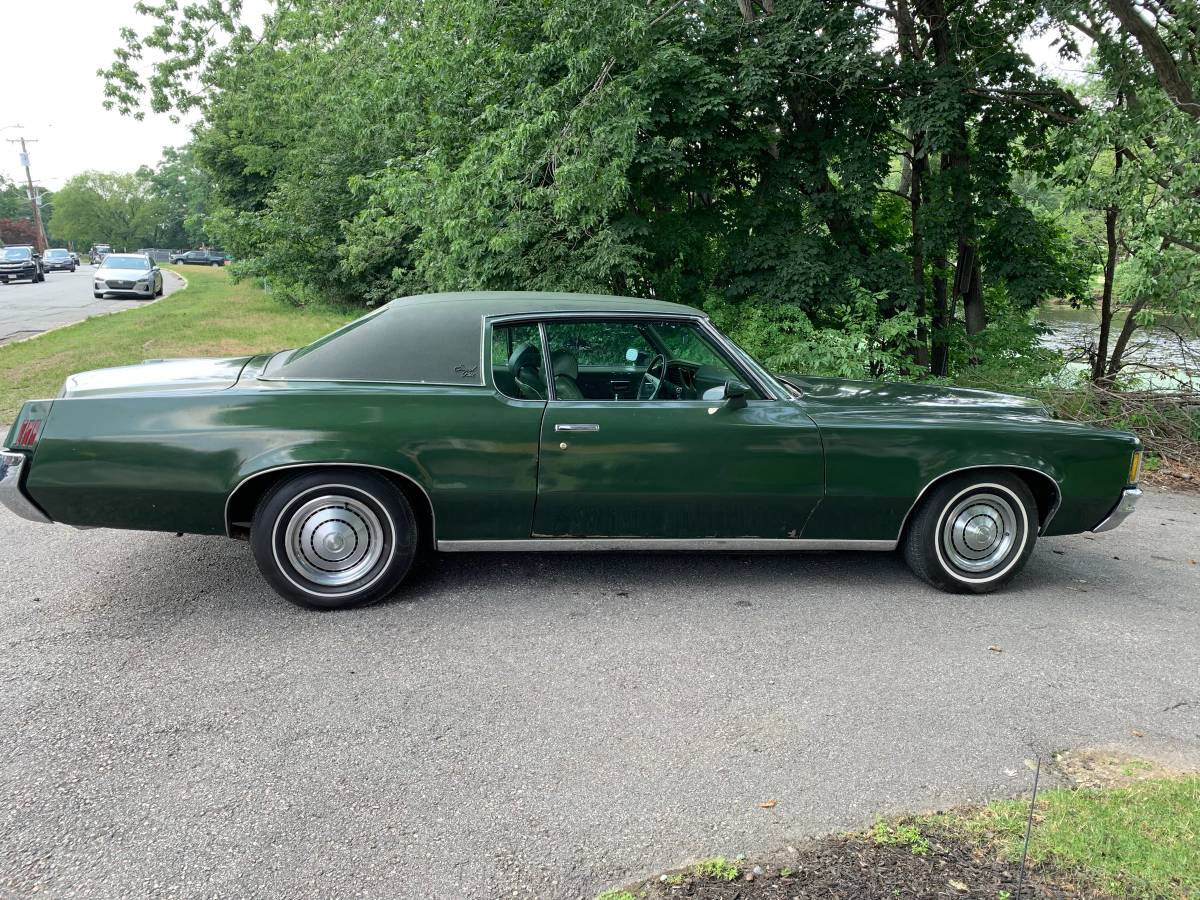 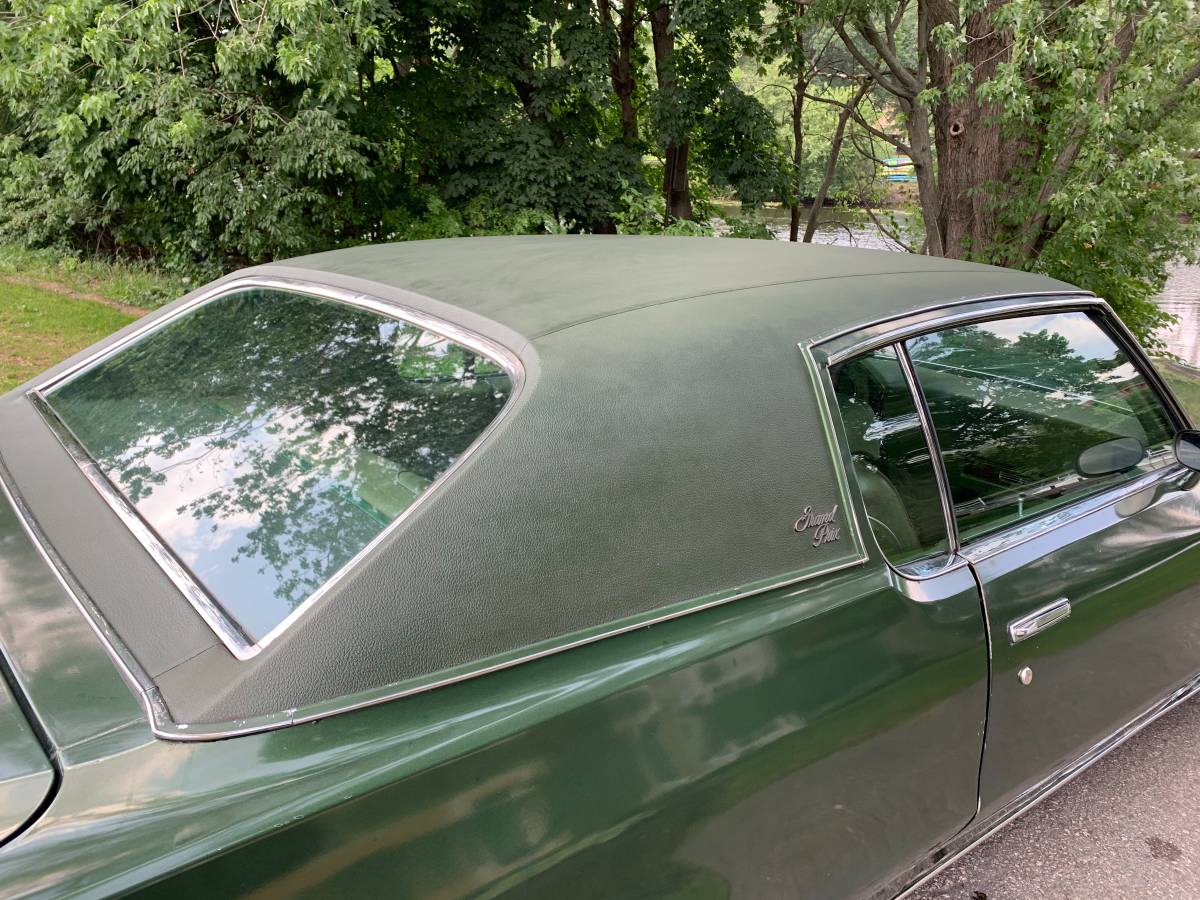 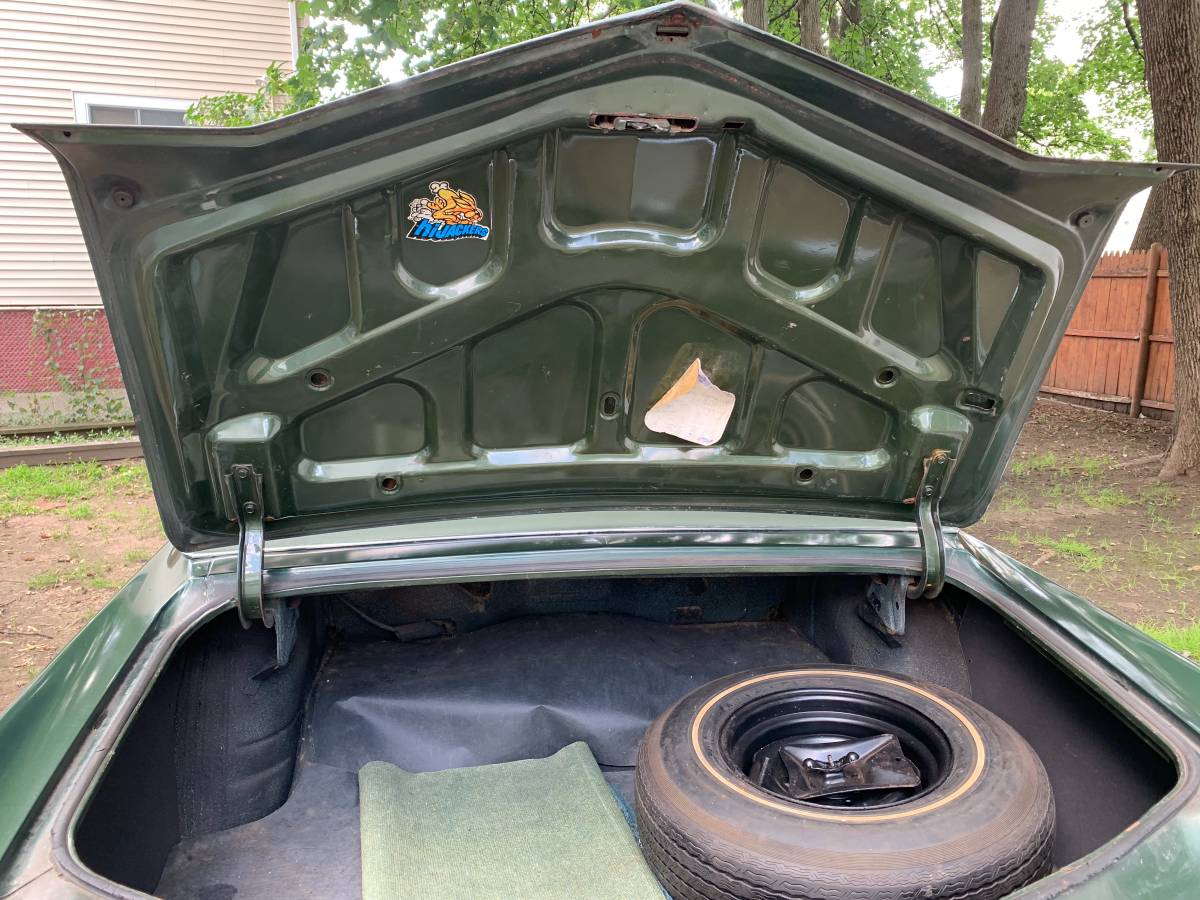 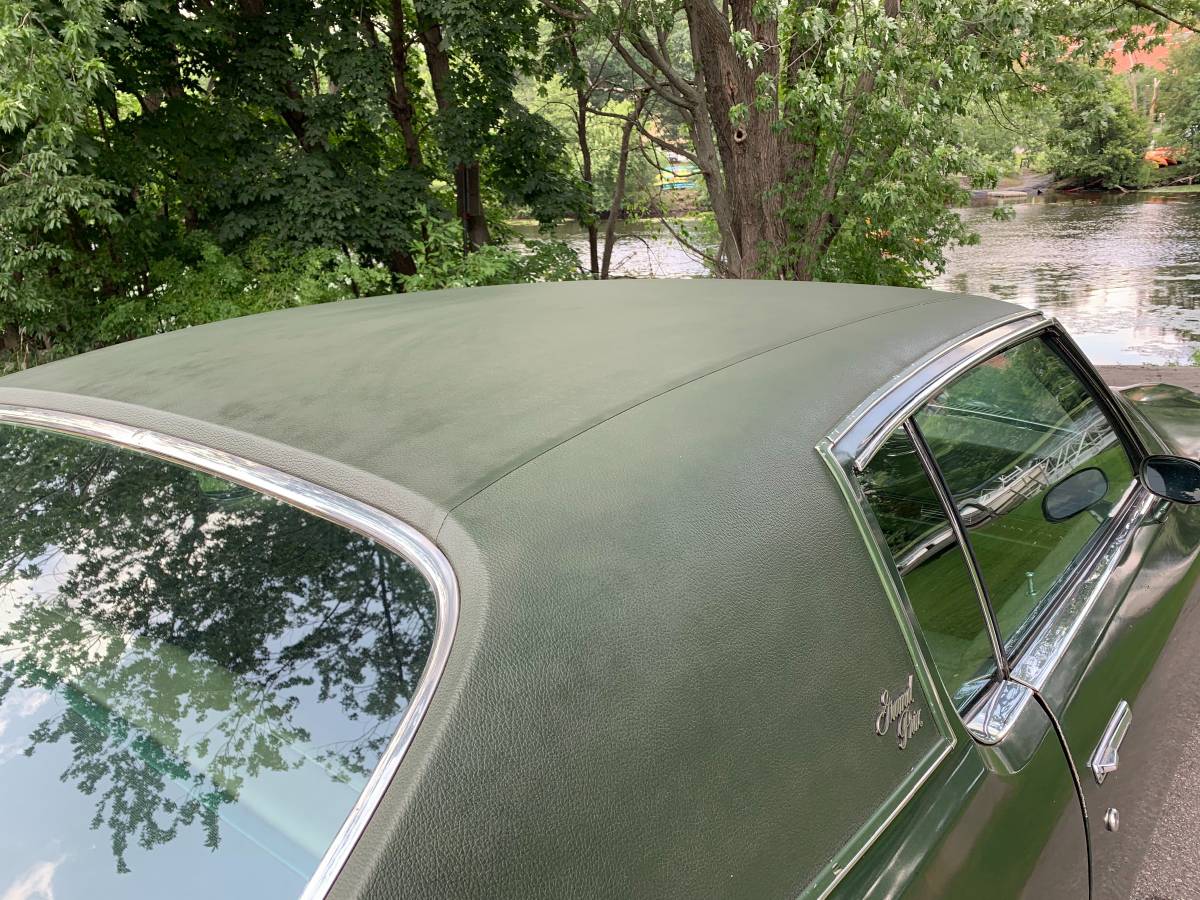 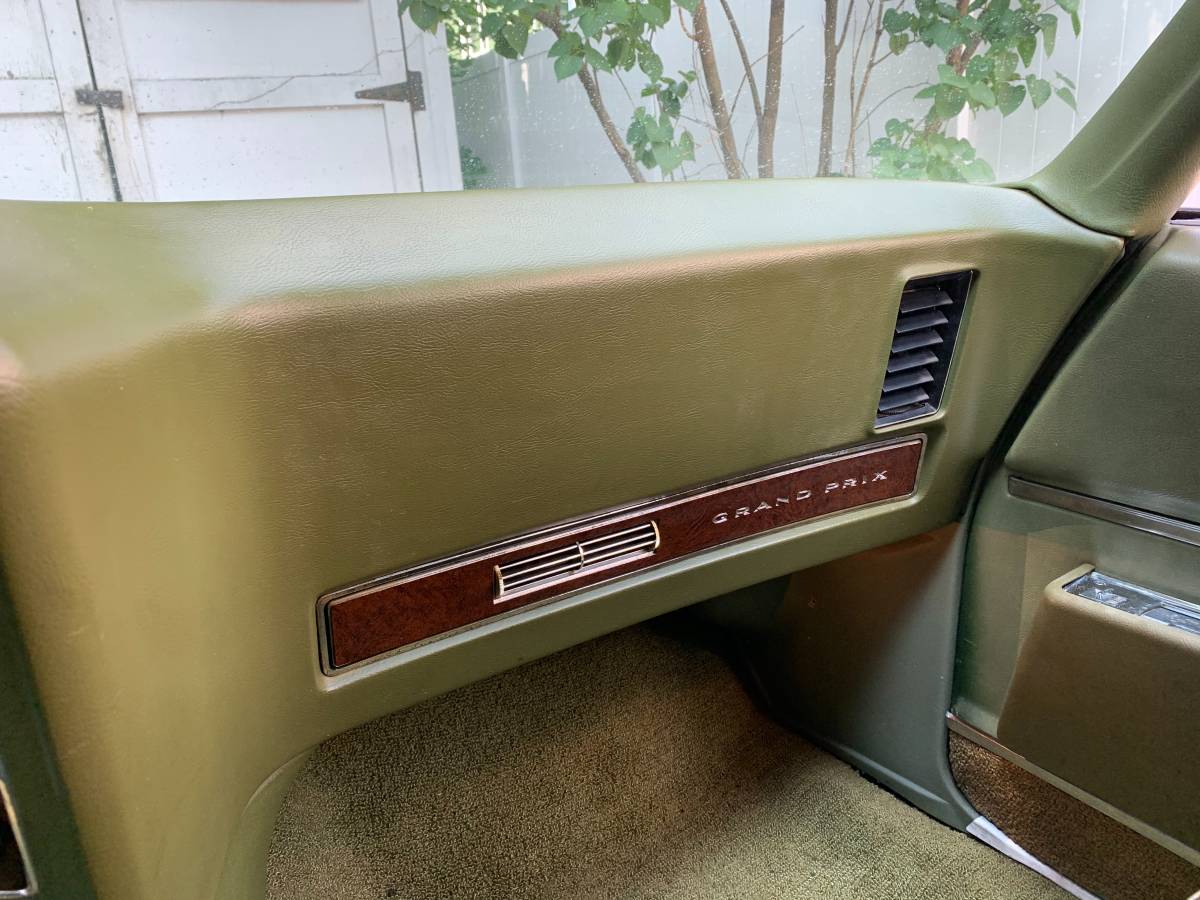 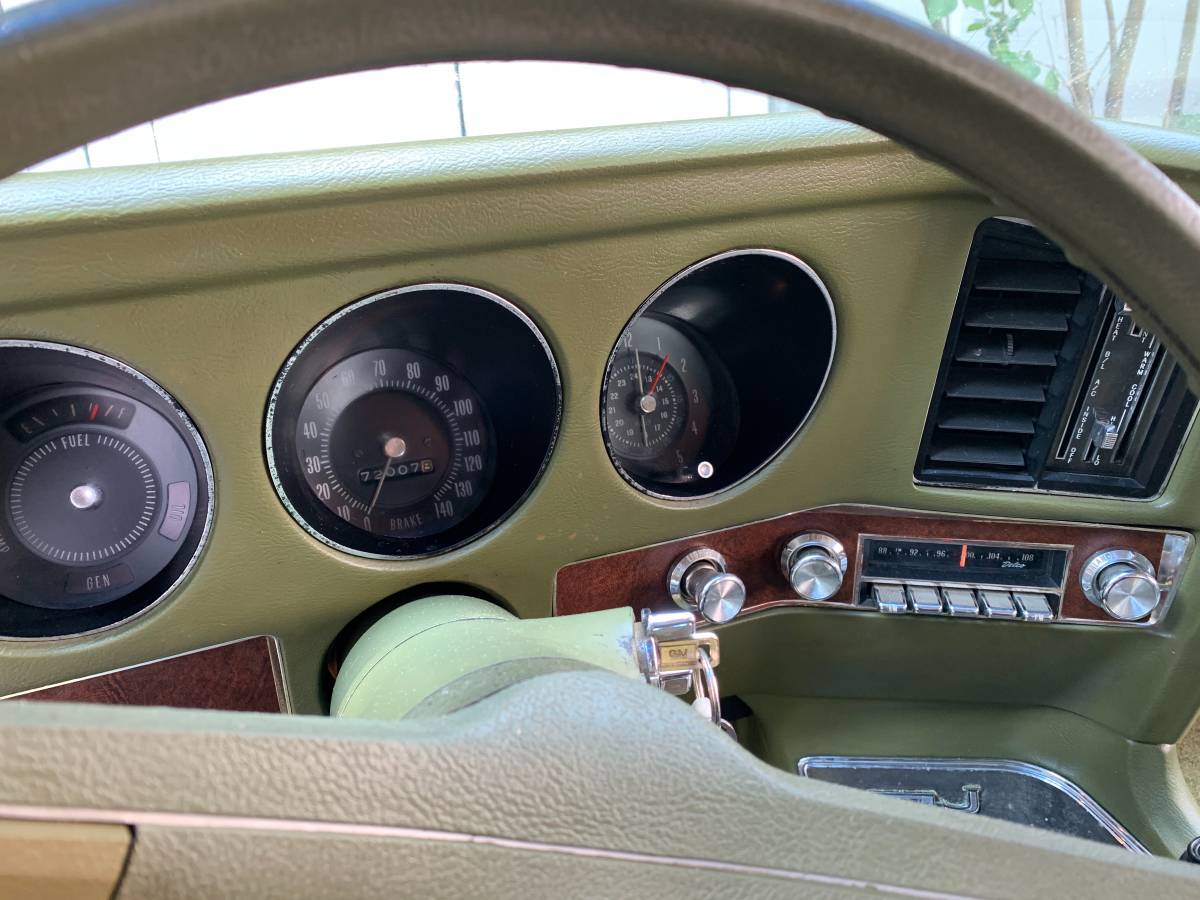 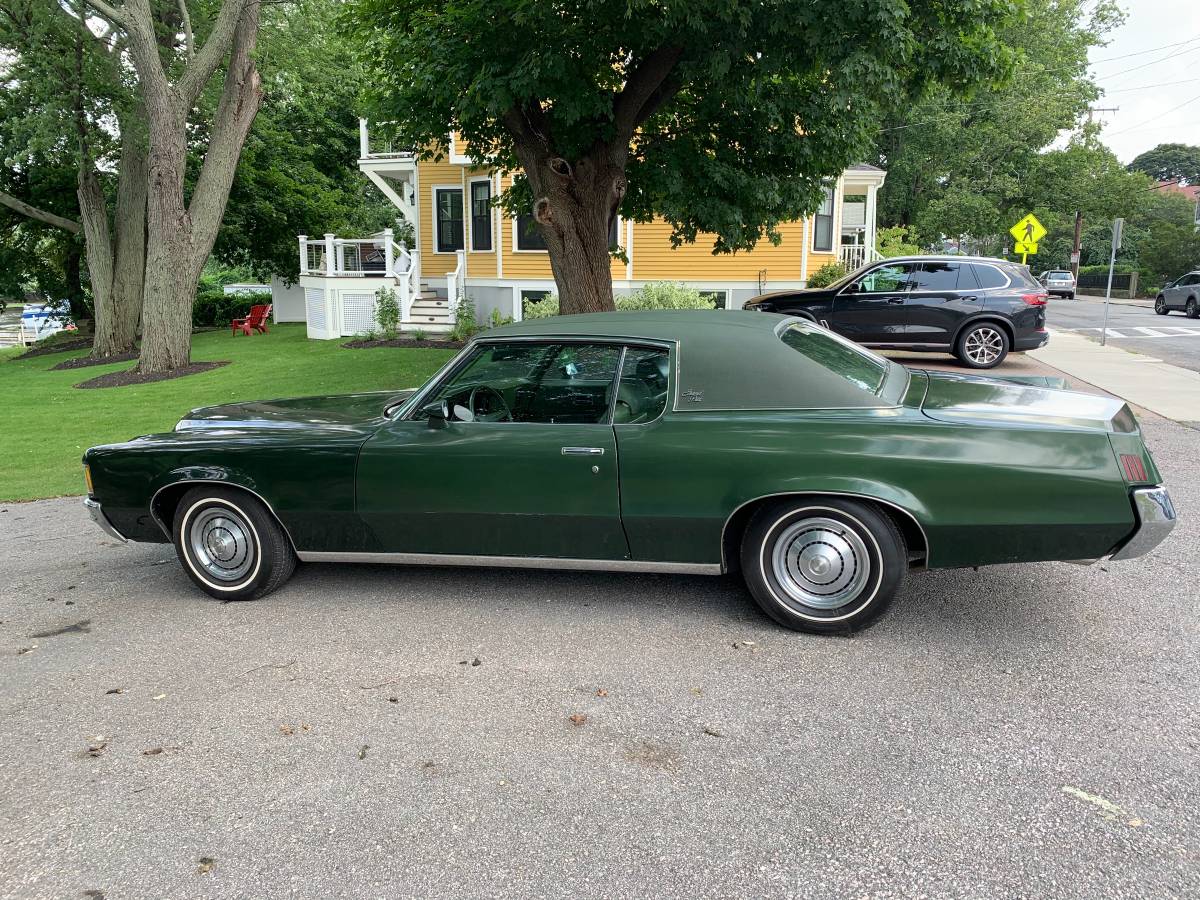 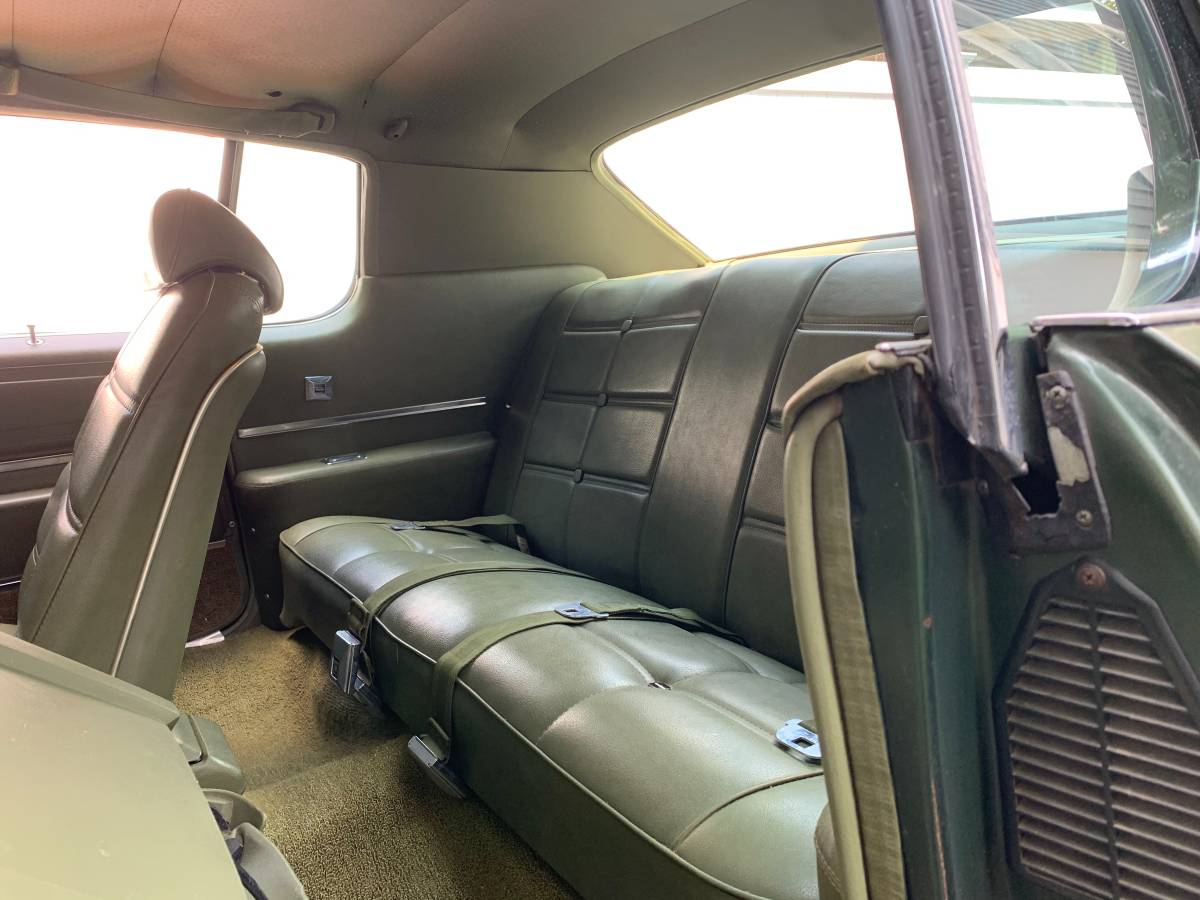 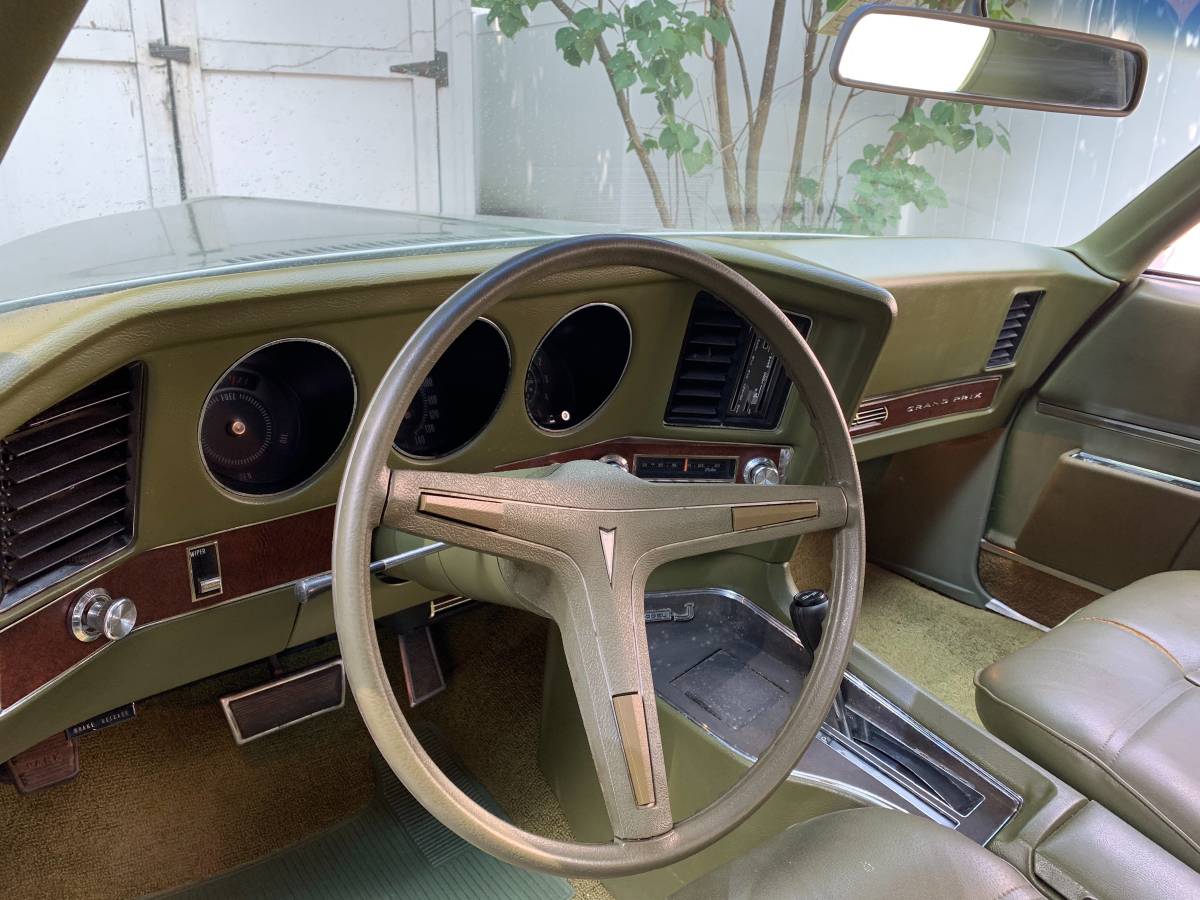 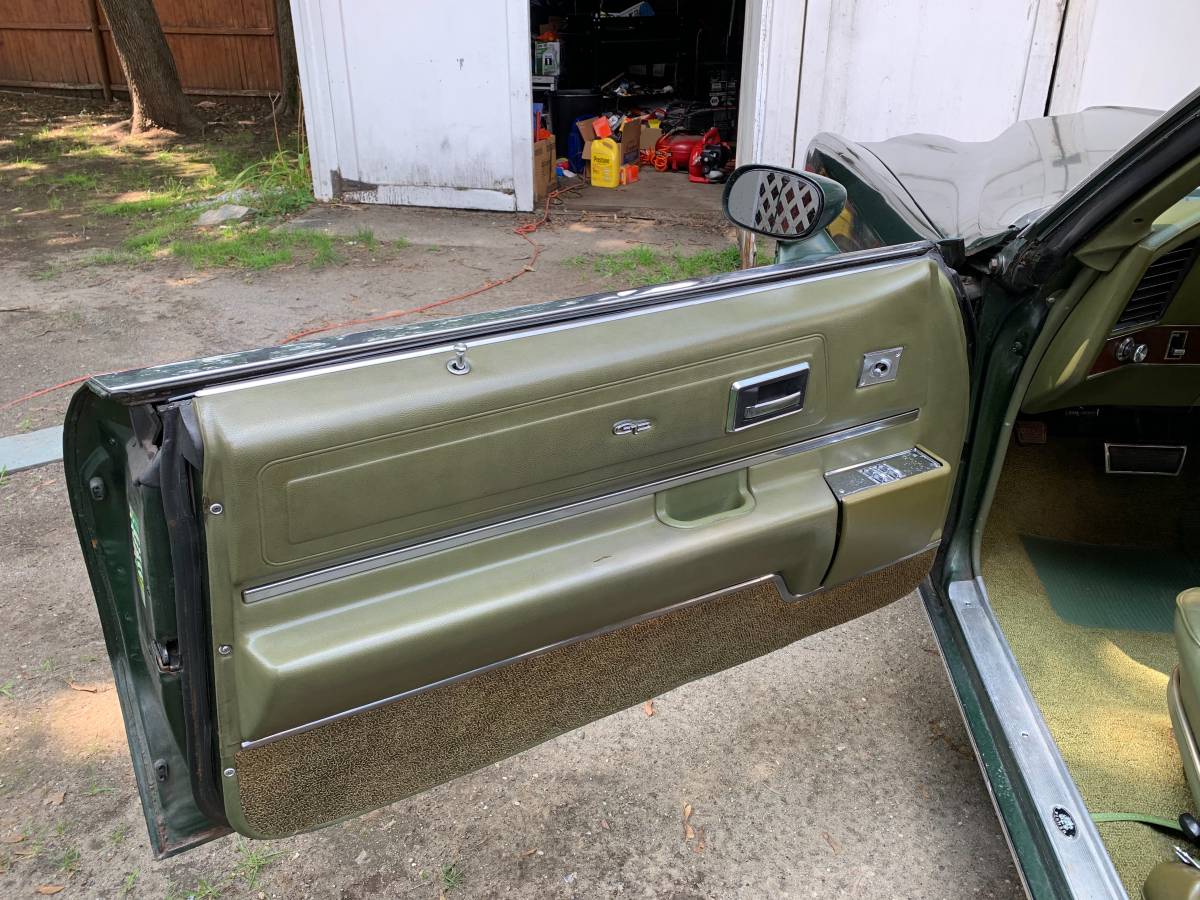 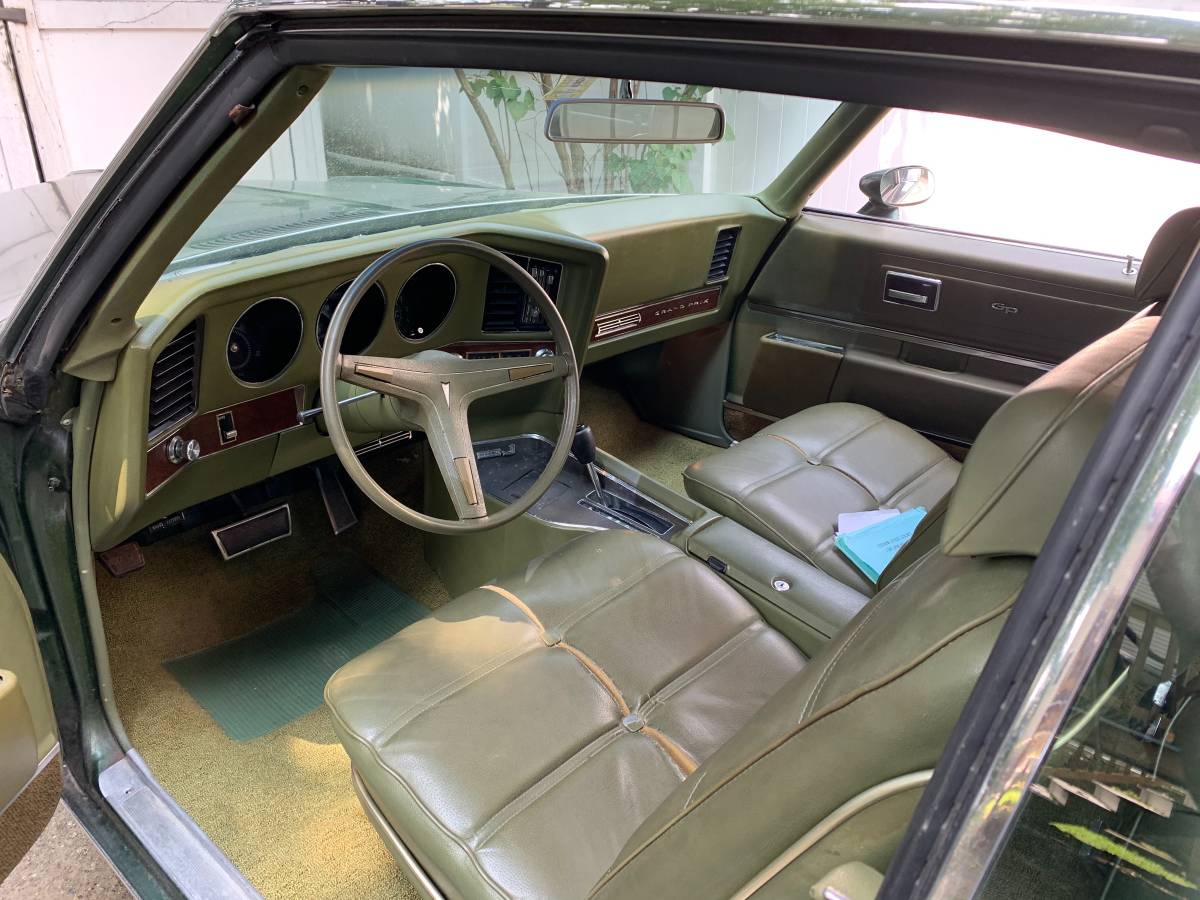 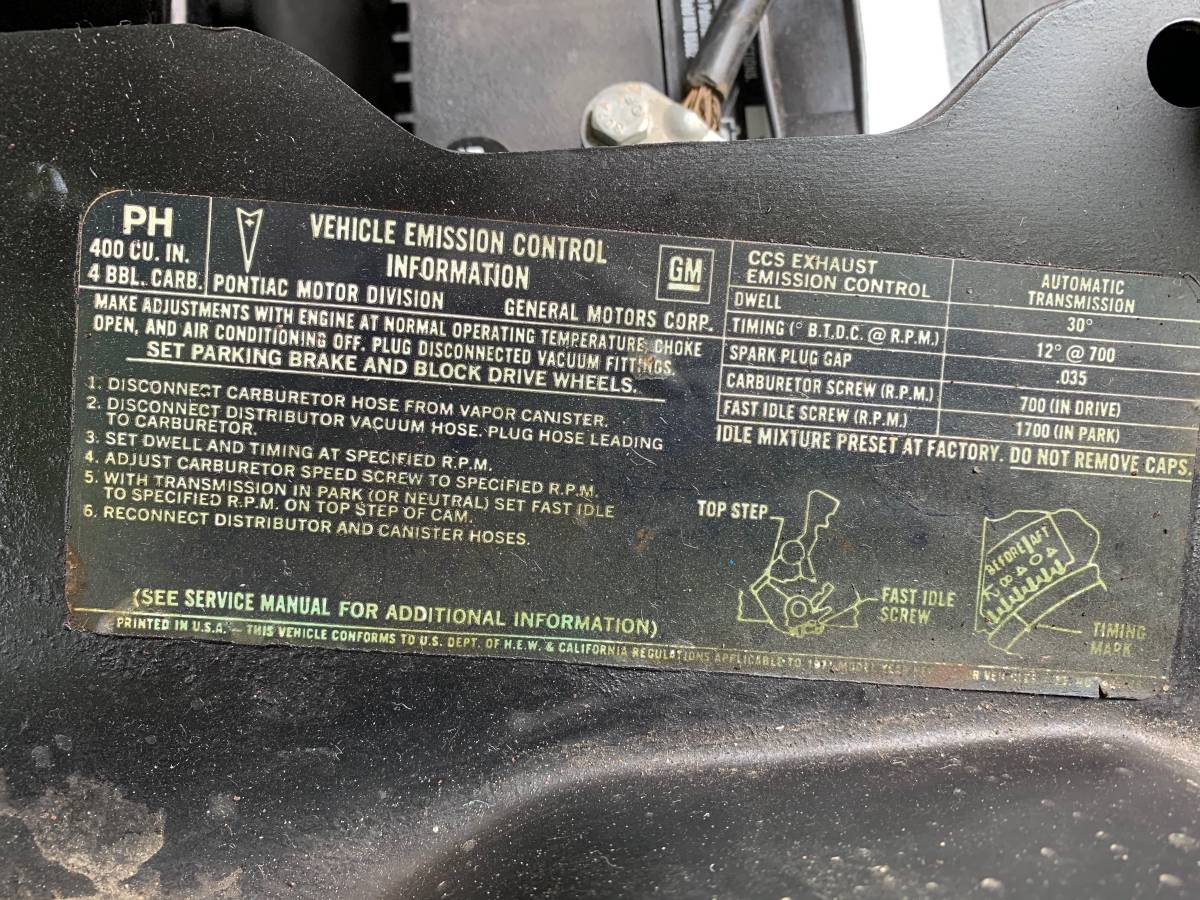 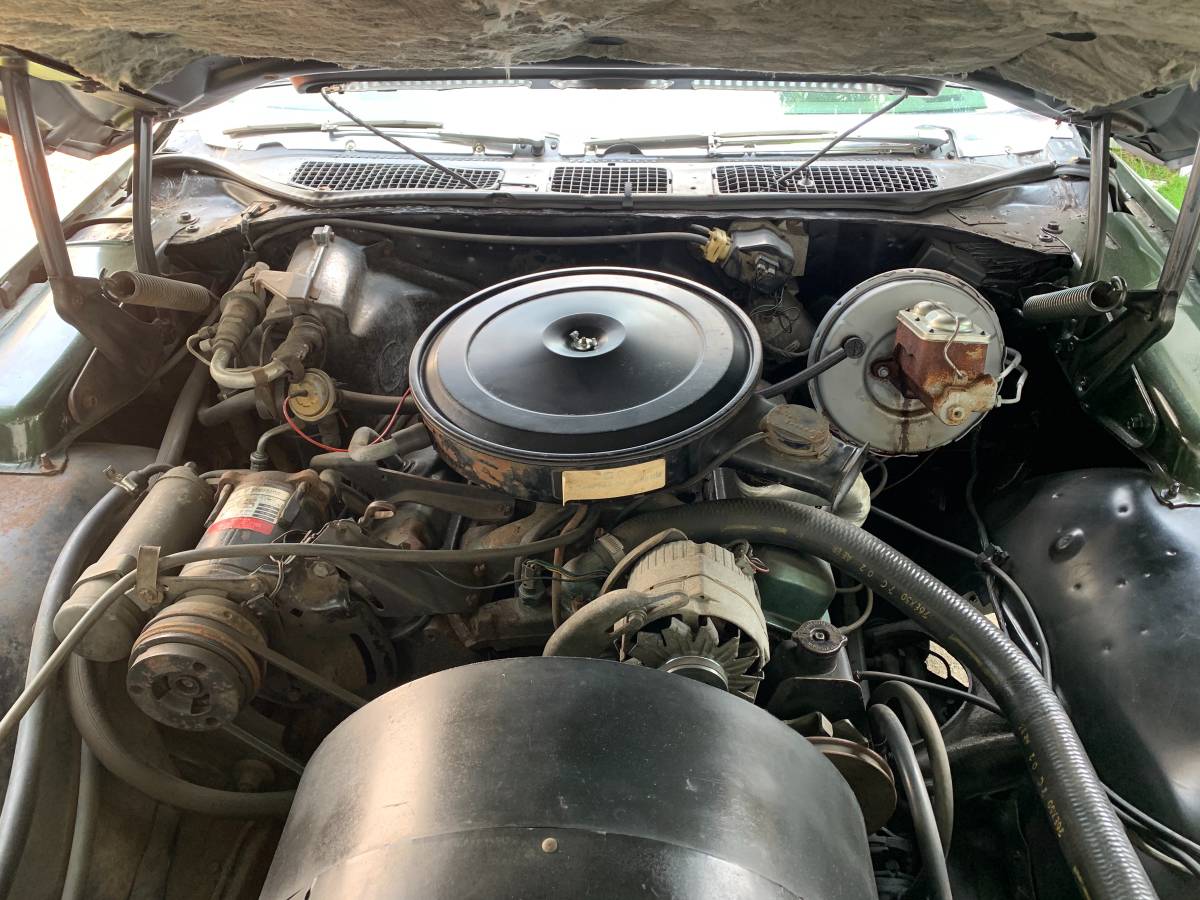 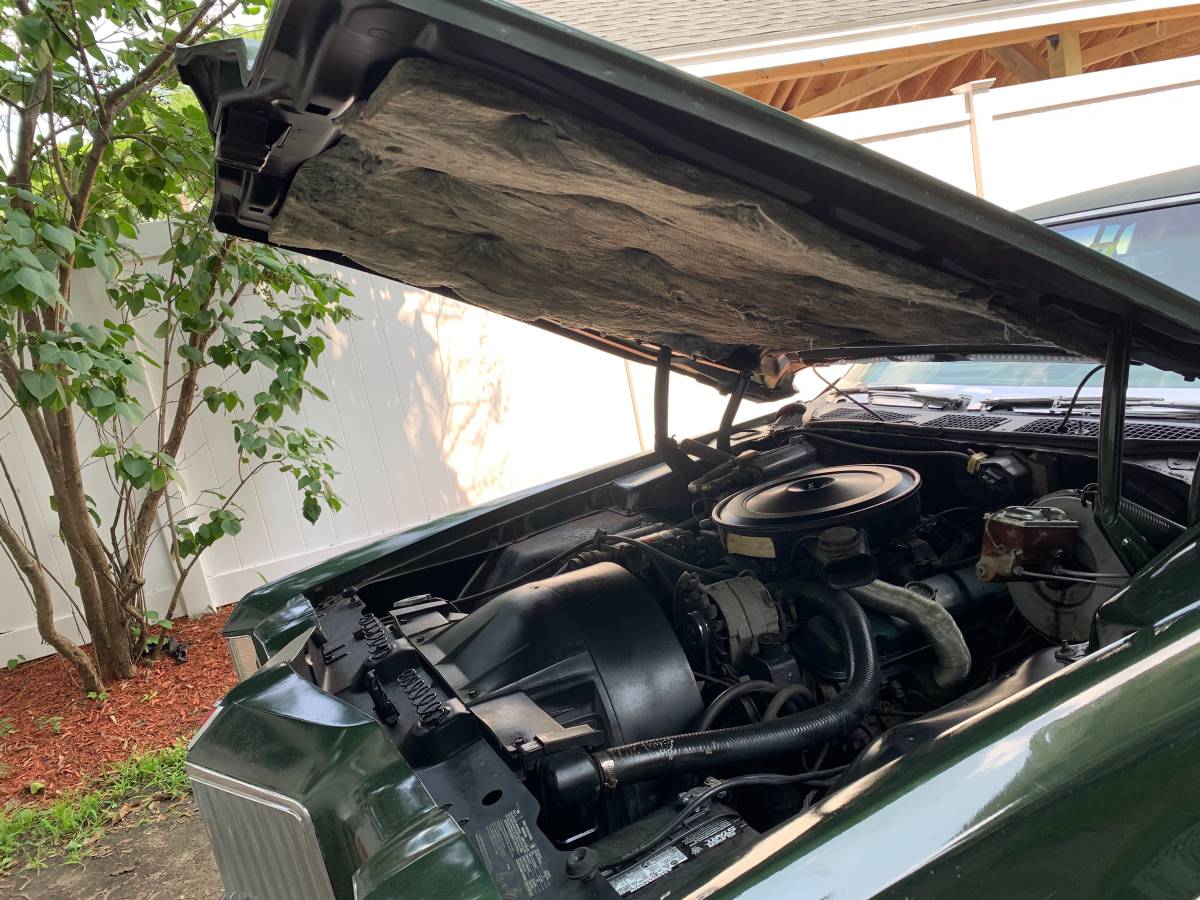 July 30, 2021 Update – With an asking price less than the #4 “Fair” condition estimates of both pricing sources, our prediction for this Pontiac Grand Prix came true as it sold in a matter of days. While this one got away, please reach out either by email or call us directly if you’d like to be informed when we come across something similar.

Some cars you come across when scouring Craigslist Classifinds can evoke many childhood memories if your parents owned a similar car.  That’s exactly what happened when I came across this 1971 Pontiac Grand Prix Model J originally listed in July 2021 on Craigslist in Medford, Massachusetts (Boston). Reported to be an all-original, numbers-matching, survivor-quality barn find, the seller of this triple green personal luxury hardtop has it priced at $8,500. Comparing that price against the Hagerty Insurance Online Valuation Tool confirms the private seller has their Model J priced $3,000 less than this guide’s #4 “Fair” (Daily Driver) estimate of $11,500.  Similarly, the  Collector Car Market Review Online Tool reveals the asking price falls between this guide’s #4 “Fair” estimate of $5,050 and its #3 “Good” appraisal of $9,800.

A uniquely stylized two-door version of Pontiac’s full-size car line through most of the 1960s, the Grand Prix sales achieved a slow but steady decline during that time. Hoping to reverse that trend, Pontiac’s general manager John Z. DeLorean ordered the development of an all-new Grand Prix for the 1969 model year. It featured new bodywork with a pronounced grille and rode on a stretched version of the intermediate GM “A” platform dubbed the “G” Body.  DeLorean and his marketing team saw a way to reverse the declining sales of the full-sized Grand Prix by creating a new niche in the burgeoning personal luxury car market. Smaller than the Cadillac Eldorado and Oldsmobile Toronado,  Pontiac positioned the new Grand Prix with cars like the Ford Thunderbird and Buick Riviera.  Fun fact: the new Grand Prix featured the longest hood of any production car ever and stylists used the Cord 810 from the 1930s as a design inspiration.

The new Grand Prix was an instant success as sales reached over 112,000 units, almost quadruple the 32,000 full-sized models built the prior model year. The similar but less luxurious Chevrolet Monte Carlo followed in 1970. Ford and Chrysler responded by producing plusher versions of their intermediate Torino and Charger, but both eventually created newer entries to the intermediate personal luxury car battle—the Ford Elite in 1974 and Chrysler Cordoba in 1975.

The 1969 Grand Prix debuted a “Command Seat” wraparound cockpit-style instrument panel that placed most controls and gauges within easy reach of the driver. Enhancing the interior’s sporty look, the “Strato” bucket seats were separated by a console integrated into the instrument panel that slanted toward the driver, which included a floor shifter, storage compartment, and ashtray. A leather trim option that also replaced nylon loop rug with cut-pile carpeting was finally offered in addition to the Morrokide vinyl and cloth and Morrokide upholstery offerings.  Innovations in 1969 included a radio antenna embedded in the windshield, flush-mounted “pop-open” exterior door handles, side-impact beams inside the doors, and an optional built-in electrically heated rear window defogger.

A new integrated bumper/grille and larger single headlights replacing the quad lights of 1969-70 models marked the introduction of the 1971 Grand Prix along with a new slanted boattail-style rear with taillights built into the bumper. Interior revisions amounted to new trim patterns for cloth and vinyl upholstery patterns for both the bench and bucket seats, but the leather interior option was discontinued.

Engine choices included the standard 400 cubic inch (6.6 L) V8 with a four-barrel carburetor and dual exhausts, now rated at 255 net horsepower; and the optional four-barrel 455 cu in (7.5 L) V8 now rated at 260 net horsepower. Both engines received substantially lower compression ratios (8.4:1 for 1971 compared to 10.25:1 in 1970) as part of a GM-corporate edict that required engines to use lower-octane regular leaded, low lead, or unleaded gasoline beginning with the 1971 model year. Transmission offerings initially were carried over from previous years, including the standard three-speed manual, or optional four-speed stick, or Turbo Hydra-Matic. However, at mid-year, Turbo Hydra-Matic automatic became standard equipment and the manual shifters were dropped. Variable-ratio power steering was made standard equipment as well.  A corporate-wide labor strike in mid-September 1970 halted all GM production for 67 days. This delayed the production of the third generation Grand Prix by one year in 1973. Production numbers for 1971 were lower than in 1970 with only 58,325 units.

The Osborne Tramain YouTube Channel provides a great Grand Prix commercial from 1971 where Pontiac gives a nod to the Cord 810 that inspired the design of the Grand Prix:

Lulled by the long hood and cockpit-style interior of the then-new ’69 Grand Prix, my father ended up being one of the 112,000 new buyers of a 400-equipped, triple blue, Model J version. Much of my early youth was spent sharing the back seat of that car (untethered of course) with my younger sister. As was typical for cars in Western New Your in those days, just five years later that shiny blue Grand Prix was now two-toned with rust. The acquisition of a cabin in the country in 1974 quickly saw the personal luxury Grand Prix give way for the first of two International Scouts.

If this Grand Prix was triple blue instead of all that green, I’d probably be stopping everything planned for today to make a run to Boston to buy this car.  There is a lot offered here for under ten thousand and I predict this Grand Prix will not last long at this price.

Car was never driven in winter.

Underside is solid trunk is perfect Driver door and fender was repainted due to dent years ago color match not perfect!

Everything works runs and drives good

Restore or drive as-is: what would you do with this Grand Prix survivor?  Comment below and let us know!