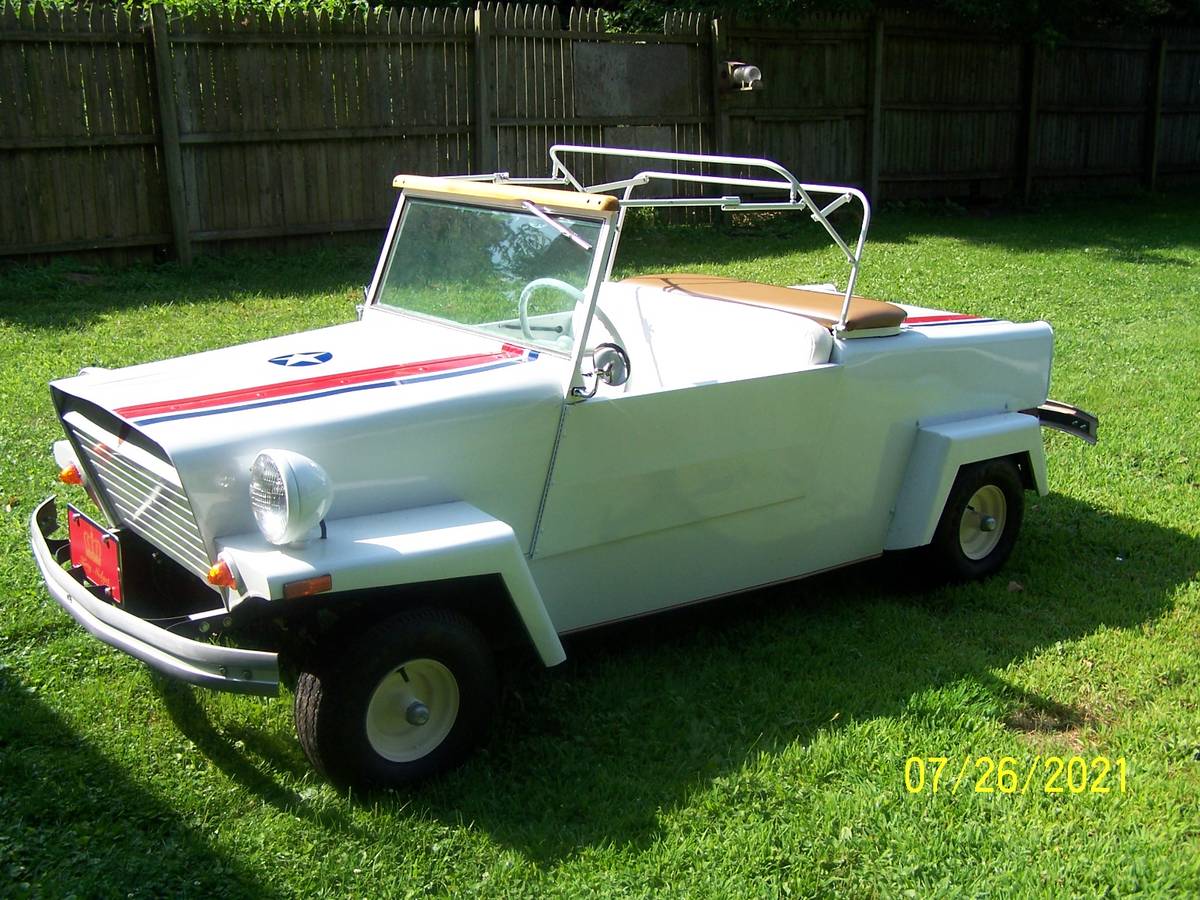 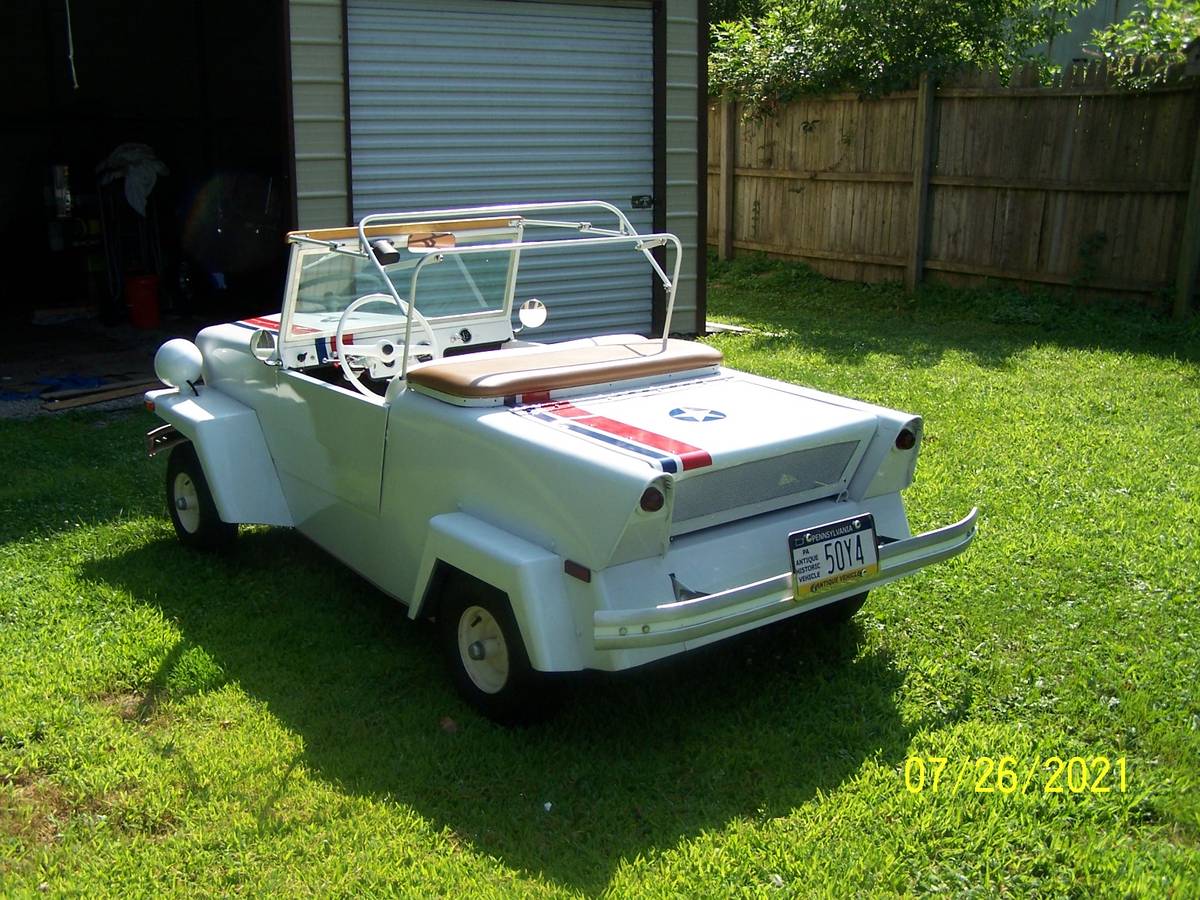 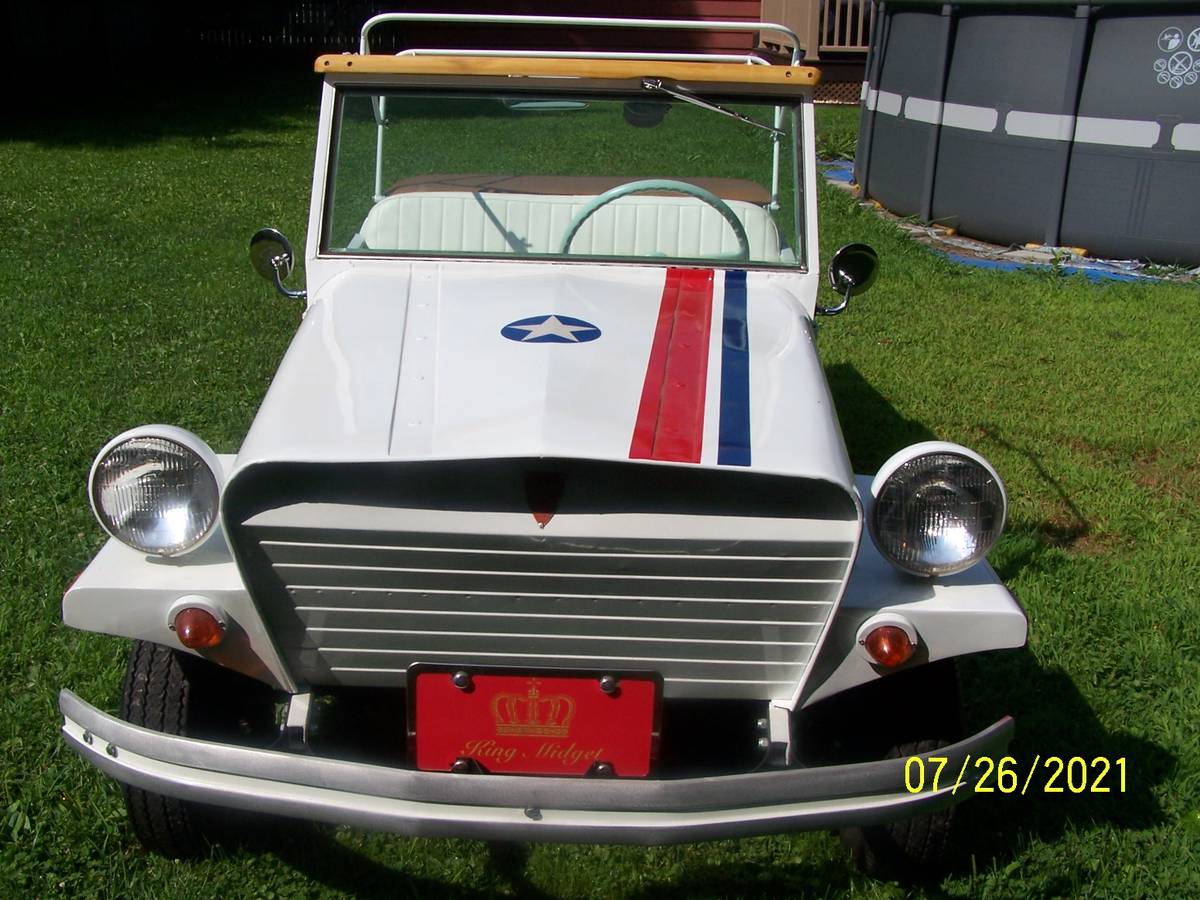 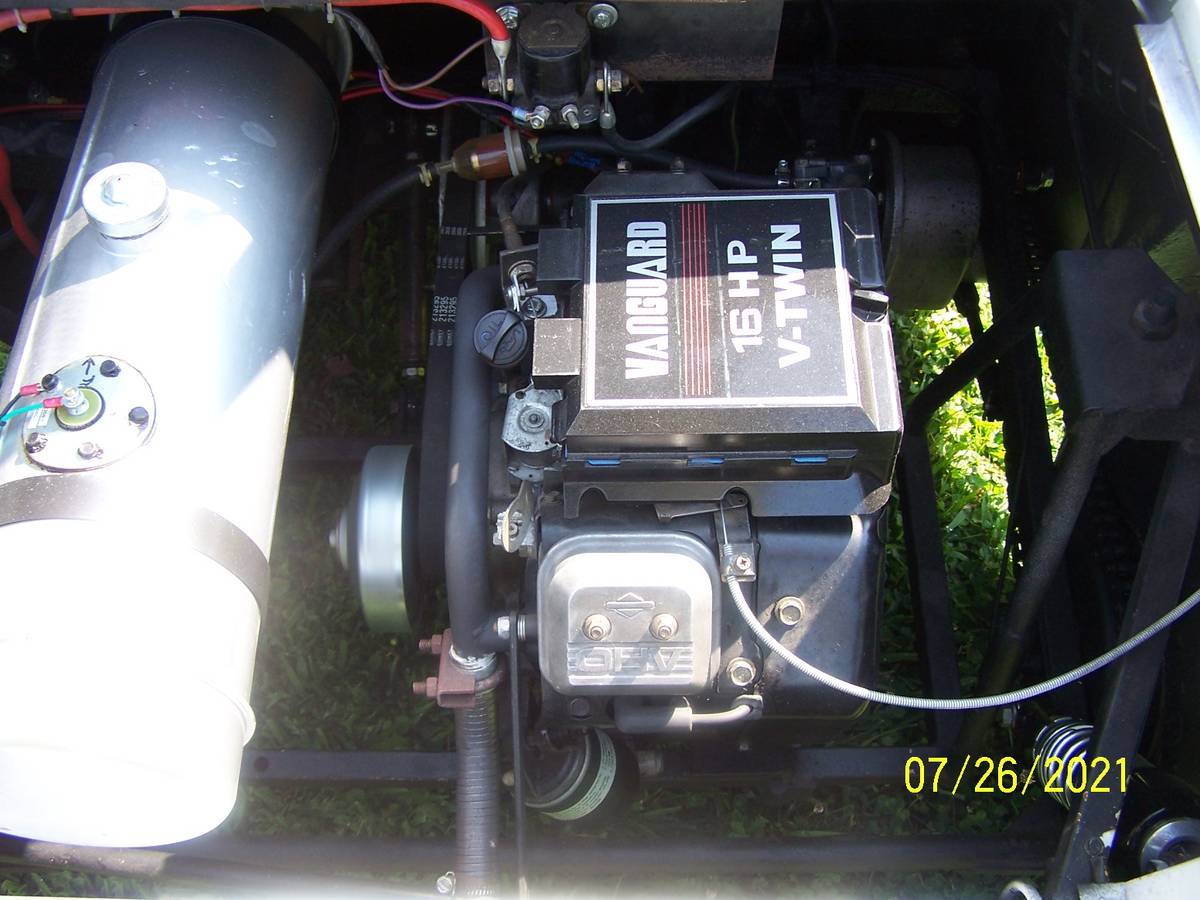 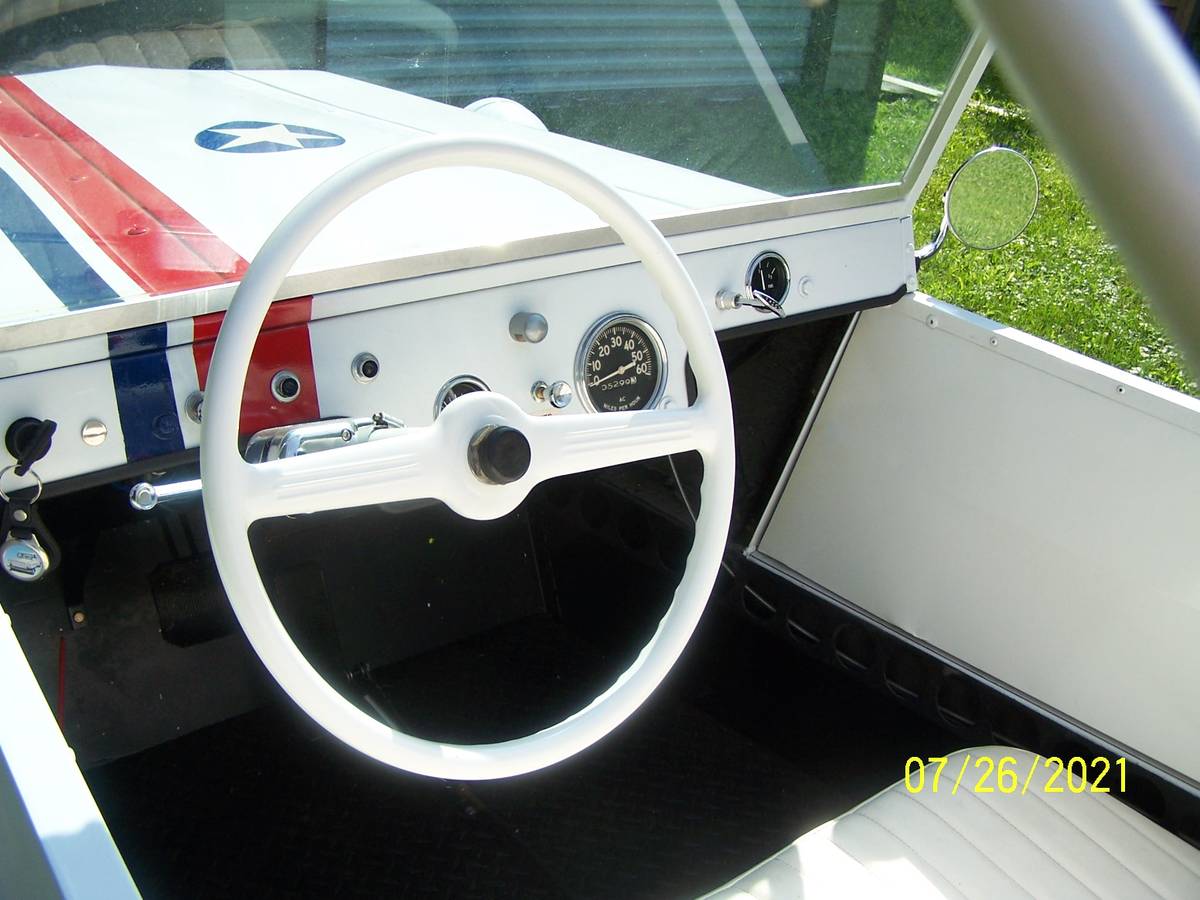 August 12, 2021 Update – we confirmed the seller of this “Classifind” deleted their listing, so we’re now able to call this one “SOLD!” While this one got away, please reach out either by email or call us directly if you’d like to be informed when we come across something similar.

With both countries left decimated at the end of World War II, England and Germany saw the emergence of microcars as an economical way for their citizens to afford a car.  Across the pond here in America, two entrepreneurs also had a similar idea when they developed the King Midget microcar.  While the original Model 1 introduced in 1946 was a single-seat kit car, by 1951 Midget Motors Company offered a two-passenger convertible known as the Model 2.   Approximately one thousand of the five thousand built in the 1950s and 1960s still exist and we just came across this 1954 example originally listed in August 2021 on Craigslist in Susquehanna, Pennsylvania (Binghamton) with an asking price of $5,000 appears to be a finely restored example offered at $48,500 currently. The NADA Guides Classic Car Online Valuation Tool indicates the current “Low”, “Average”, and “High” retail values for this model to be $3,450, $7,525, and $10,700, respectively.

Started by two American WWII veterans Claud Dry and Dale Orcutt following the War, Midget Motors Company based in Athens, Ohio designed and built microcars between 1946 and 1970.  Although the company’s main product line was parts supplies,  they also started branching out by offering a kit to build the car, they soon added completely assembled cars and later only offered completed cars.

Midget Motors’ primary methods of advertising their cars were through small advertisements in popular magazines that appealed to home mechanics. The ads were tiny but effective; they showed a midget car and some earlier ads contained the phrase “500 lb. car for $500.00” The ads brought in a steady stream of interested customers. Some of the magazines featured articles about the car and several pictured the car on their front cover. This method of direct selling continued for most of the life of the company.

The first generation King Midget was a single-passenger kit designed to resemble a midget racer. The kit included the chassis, axles, steering assembly, springs, instruction manual, plus dimensioned patterns for the sheet metal, all for a cost of $270.00. It would accept any single-cylinder air-cooled engine.  By 1947, the Model 1 was also available in assembled form, powered by a six-horsepower Wisconsin engine. Since adding a differential would have increased the cost, the car was driven by the right rear wheel only. It used a centrifugal clutch designed by Orcutt. The pair began to develop a two-passenger microcar in 1947. In total, nine separate prototypes were built until the designers met their goals of simplicity, lightness, and economy. The result was the improved Model 2.

When it appeared on the cover of Popular Science magazine in 1951, the Model 2 was a two-passenger convertible offered either fully assembled or as a kit, powered by a 23 cubic inch, 7.5 horsepower Wisconsin AENL engine. With a 72 inch wheelbase (eight inches less than a Crosley 4CC), the Model 2 measured only 102 inches overall. The Model 2 was still a very basic car; it had no speedometer or reverse, but it was light, strong, and available for just $500.  Soon after the Model 2 was in production, the company began to offer the option of a two-speed automatic transmission that included a reverse. This transmission, developed and patented by Orcutt and Dry, was soon to be included as standard equipment and was used on all subsequent models.

The popular TV show MotorWeek took a look at the history of King Midget approximately ten years ago and have the segment posted on their YouTube channel:

The King Midget featured here appears to be a good condition and features a much more powerful and modern 16 horsepower Briggs & Stratton engine. While the top frame is shown in place, it appears you’ll need to have a reputable upholsterer recreate a convertible top for the car.