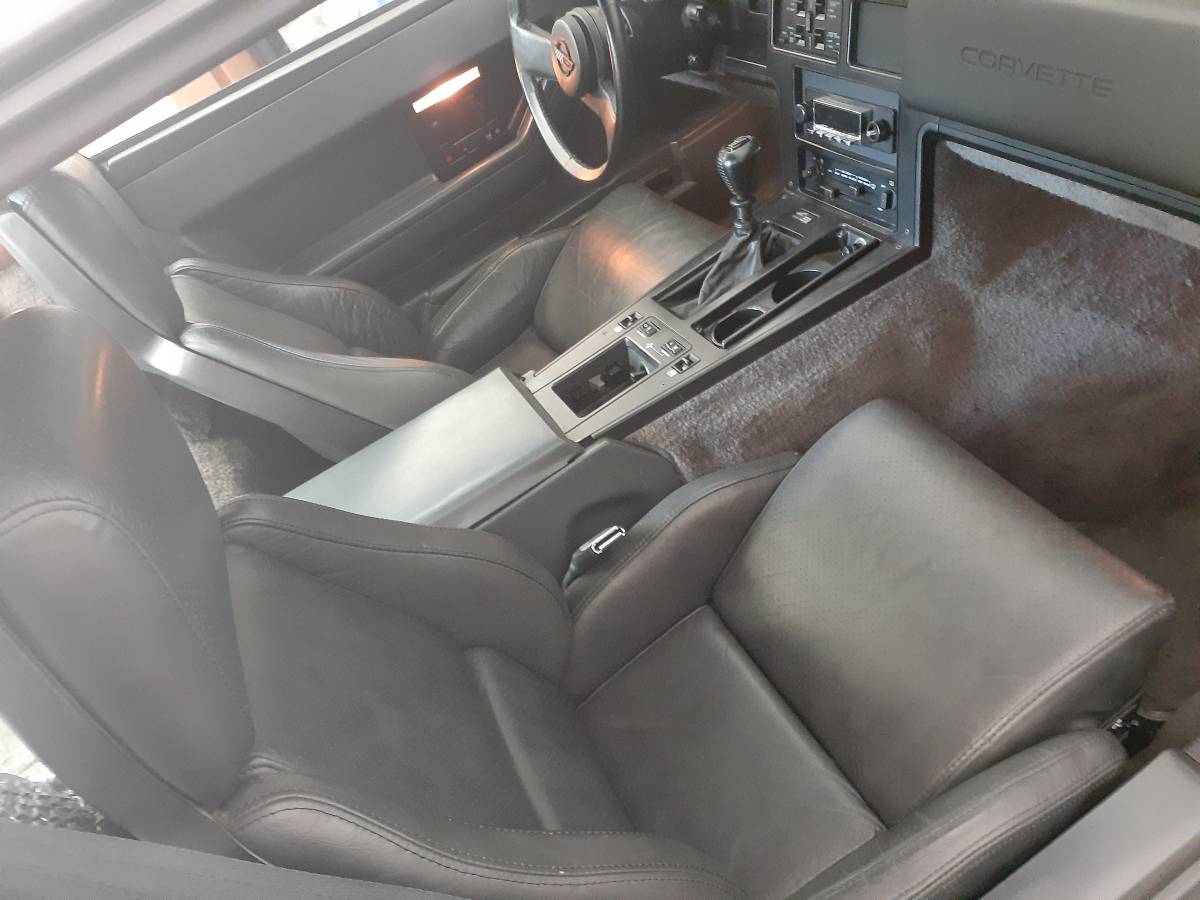 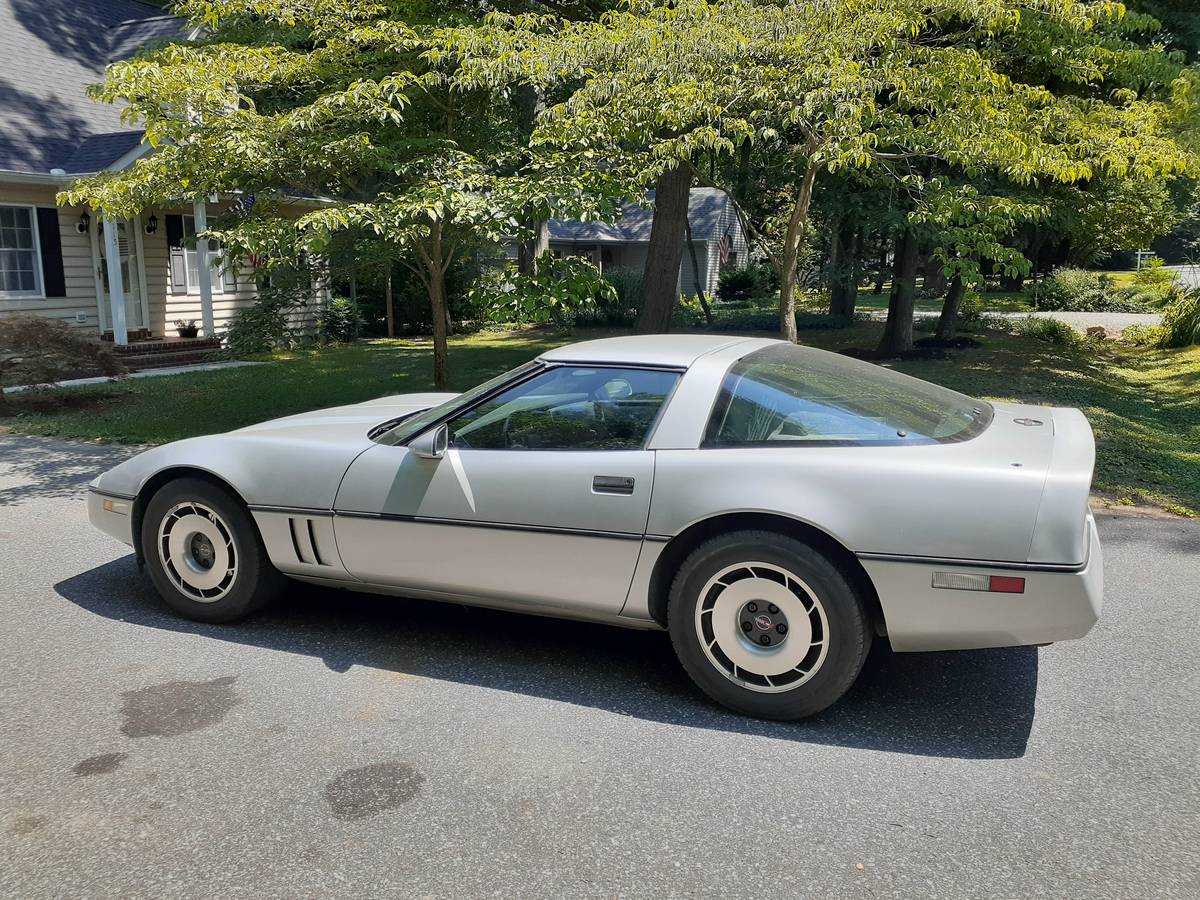 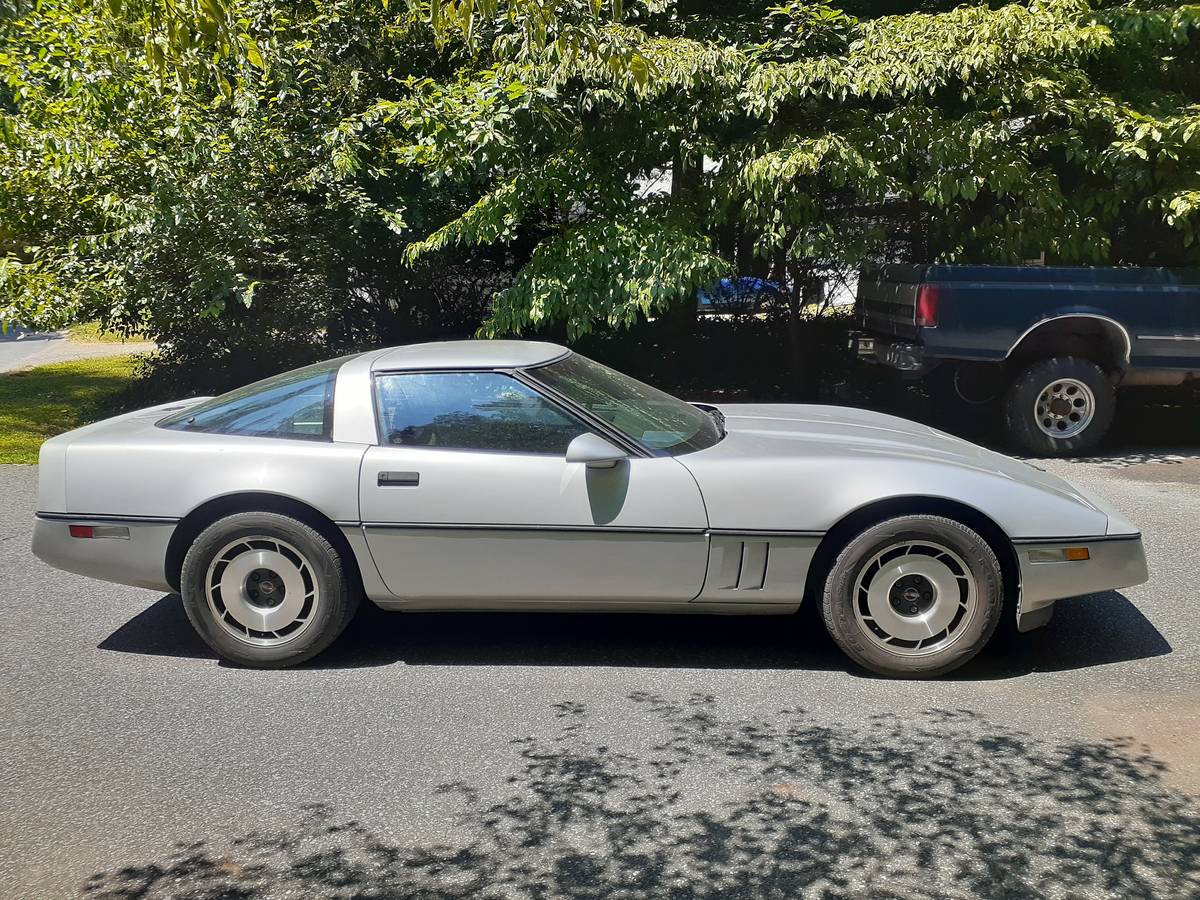 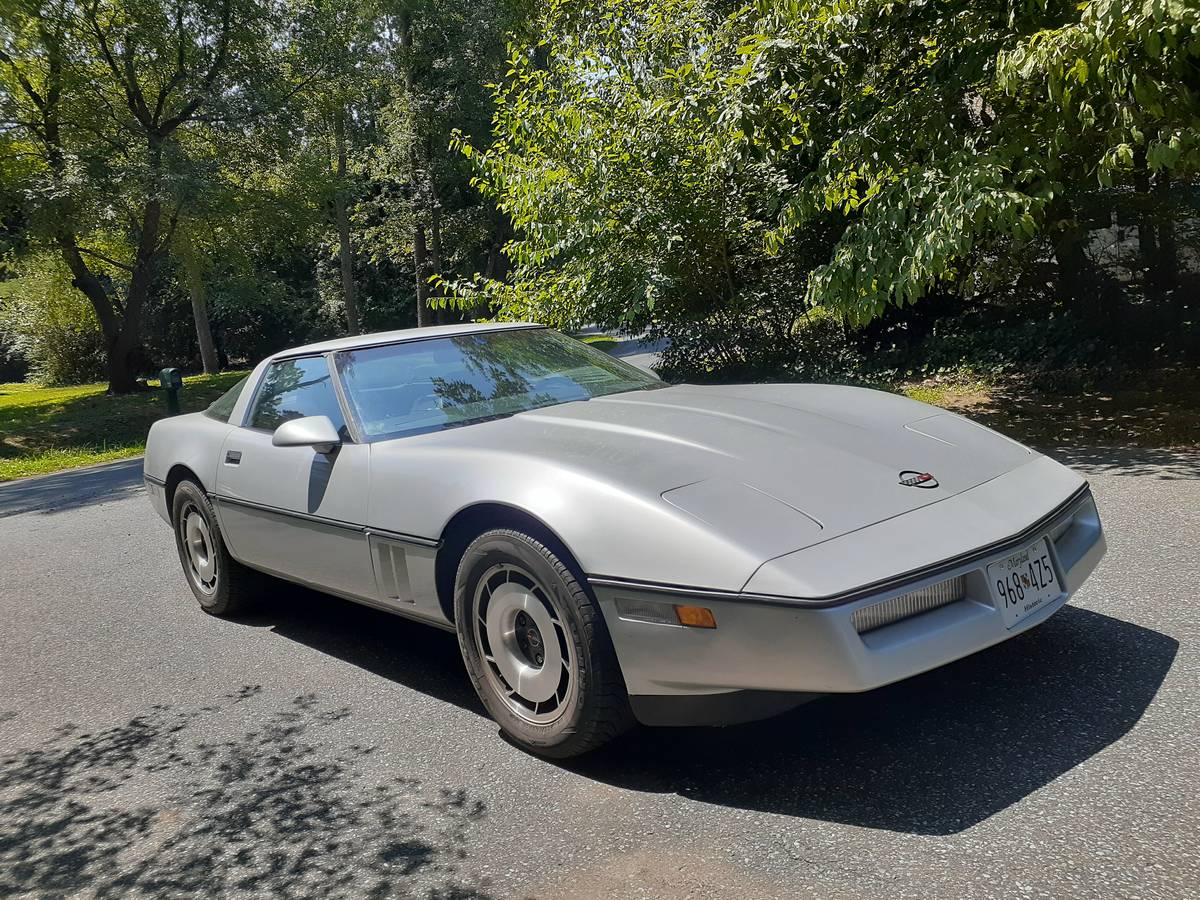 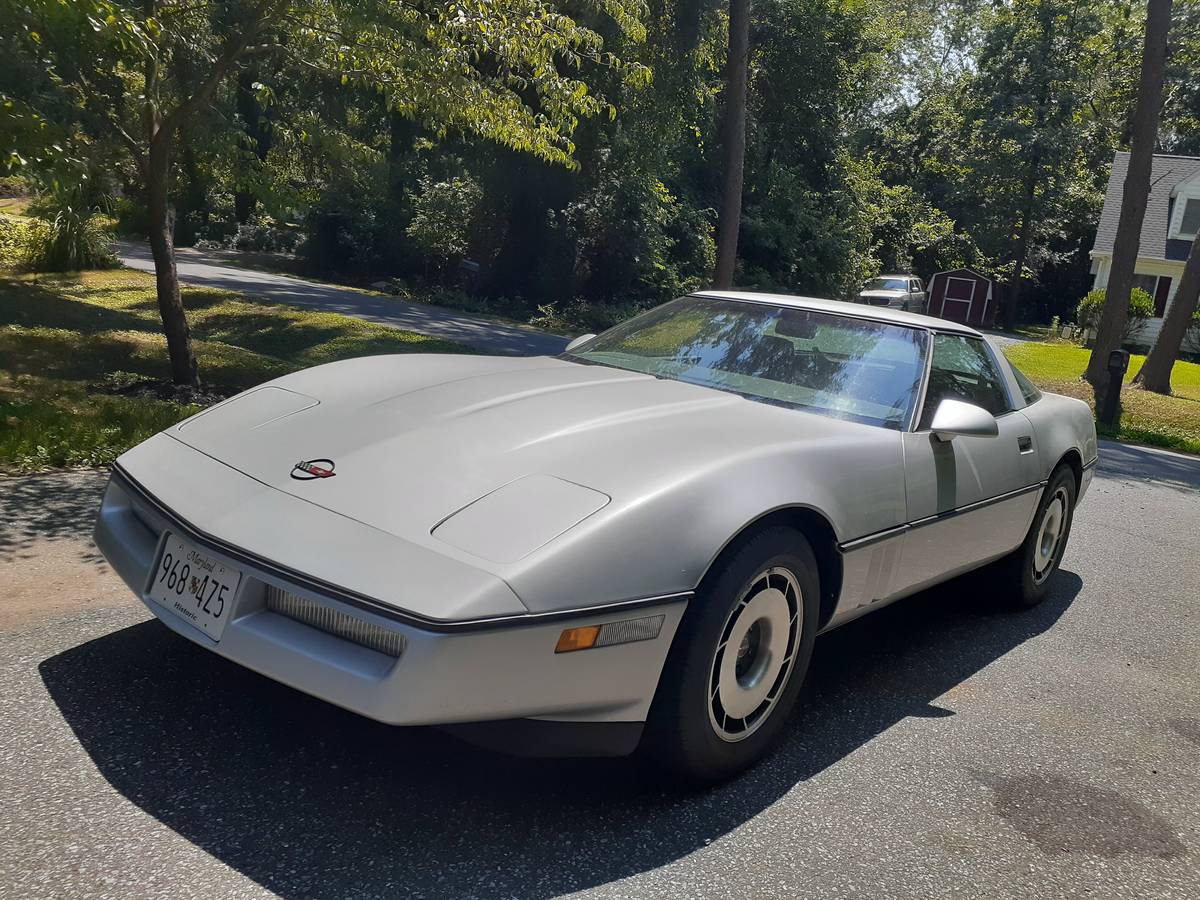 September 17, 2021 Update – We just confirmed the listing for this C4 Corvette “Classifind” expired, so with no replacement found we’re assuming this ride “Sold?” While this one got away, please reach out either by email or call us directly if you’d like to be informed when we come across something similar.

August 8, 2021 Update – Just two days after we first featured this launch year C4 Corvette, the seller reduced their asking price by one large to $8,500. This is entry-level Corvette ownership at its best as long as the “Cease-Fire” V8 is sorted properly.

We often come across and then quickly pass on featuring launch year 1984 C4 Corvettes for a variety of reasons. While we can look past the low power of that vintage’s crossfire injected 350 cubic inch small block, the typical deal killers are the three-speed automatic and the standard suspension. Then there are the rare occasions we happen upon a true gem like this sliver-over gray leather 1984 Corvette originally listed in August 2021 on Craigslist in Chestertown, Maryland (Baltimore) with the right stuff. Namely, the rare-to-find Doug Nash 4+3 manual transmission and the Z51 sports suspension.  Bonus points that this example has only 35,000 original miles.  All the best a 1984 Corvette can give for just $9,500. Comparing that price against the Hagerty Insurance Online Valuation Tool confirms the private seller has their TR250 priced between this guide’s #3 “Good” estimate of $6,200 and its #2 “Excellent” appraisal of $12,700.

After a long 14-year production run, Chevrolet planned to replace its aging C3 Corvette with the all-new C4 version for the 1983 model year to correspond with the car’s 30 anniversary.  Unfortunately, production delays prevented the car from becoming publicly available until the spring of 1983, so Chevrolet decided to forego a 1983 model altogether and launched the new car as an early 1984 model.

The exterior was a modern, more aerodynamic interpretation of the original 1963 Sting Ray.  Unfortunately, under the clamshell-style hood from the 81-82 C3 Corvette was Chevrolet’s L83 5.7 Liter “CrossFire” V8 producing just 205 horsepower. After not certifying a manual transmission for 1982, for 1984 Chevrolet offered a Doug Nash “4+3” which consisted of a four-speed manual, with overdrives on the top three gears. The 700R4 automatic was also available as an option.

The C4 Corvette wasn’t body-on-frame, nor was it quite a unibody. The C4 had what GM called “Uniframe” construction. It featured a traditional rail frame, with the windshield frame and B-pillar frame integrated into the frame. The Targa top, when installed, connected the windshield and B-frame, thus becoming part of the structure. As a result, it did not simply latch in but had to screw in. The C4 also had large side sills which resulted in a big climb in and out. Coil springs were also replaced with a plastic transverse mono leaf-spring, significantly reducing the weight of the suspension components while providing body rigidity.

The only thing we don’t like about this C4 Corvette is the seller’s choice of Retrosound Radio (the two-post unit is a style better suited for C1-C3 Corvettes, not Rad Era C4s!) but that is an easy fix.  Before you join the crowd and pan this 1984 Corvette, do yourself a favor:  drive an early 1980s vintage C3 and then get behind the wheel of this C4.  Doing so will provide you with a reference point of just what an improvement the C4 was at the time.  While Chevrolet continuously improved the C4 during its twelve-year model run so better versions can be had, an unmolested C4 is a great bargain that not only gains you admittance to any Corvette event you choose, this example is also RADwood eligible.

Has new brake pads, performance rotors, shocks, and a retro sound stereo system (I also have the original Bose head unit, which still works- I switched it out for an aux input).

Garage kept its whole life and was well maintained. Sad to see her go but I am moving cross country and will not be taking it with me.

If you have any questions please call or text Lincoln, thanks!“

Show or go: what would you do with this C4 Corvette Coupe?  Comment below and let us know!