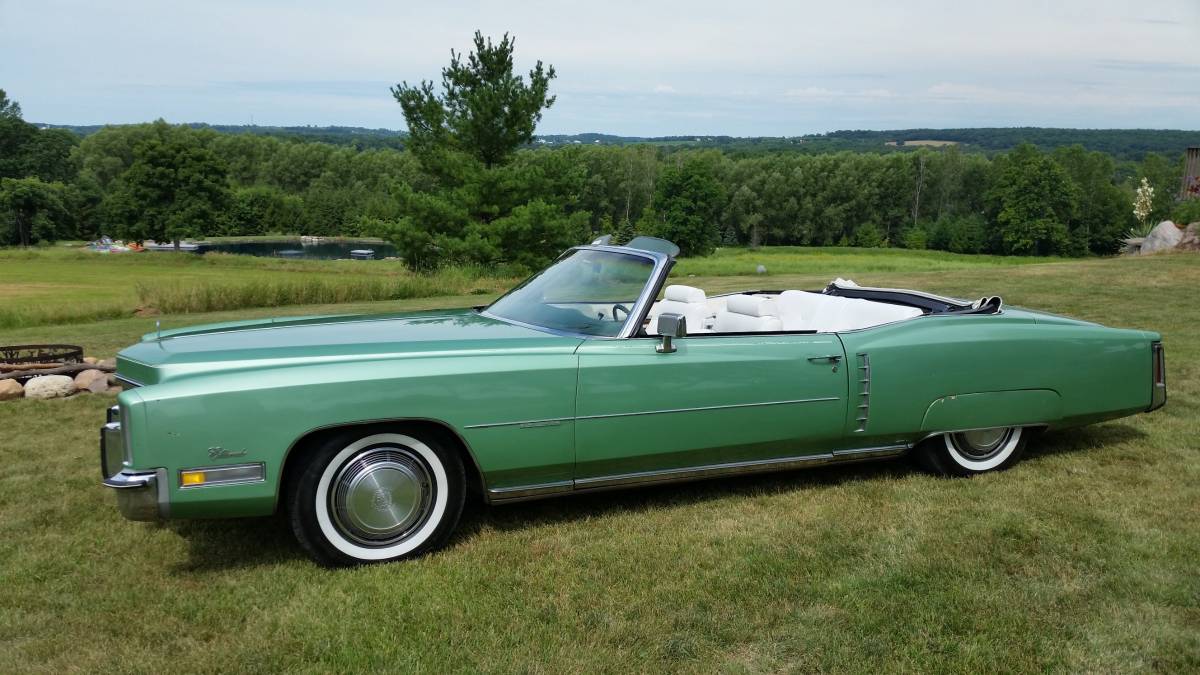 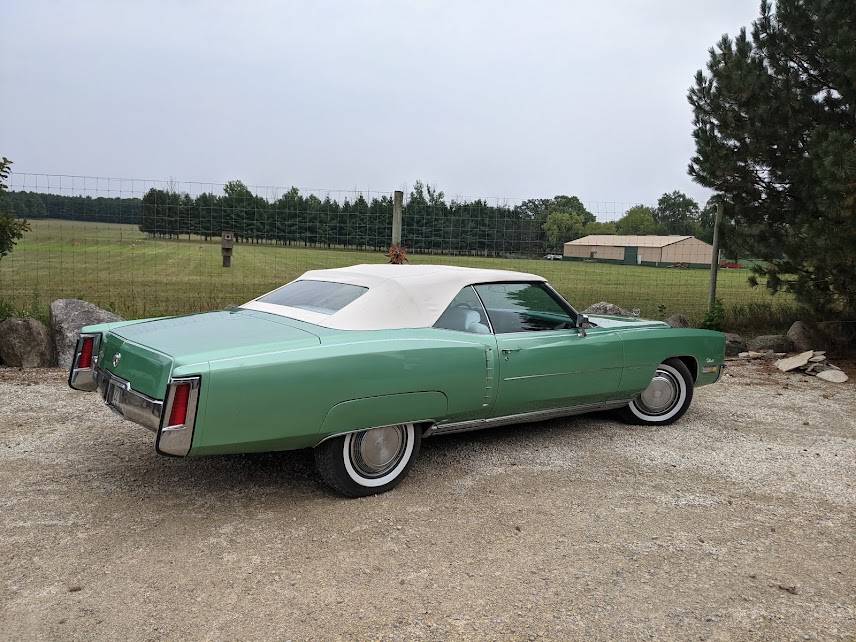 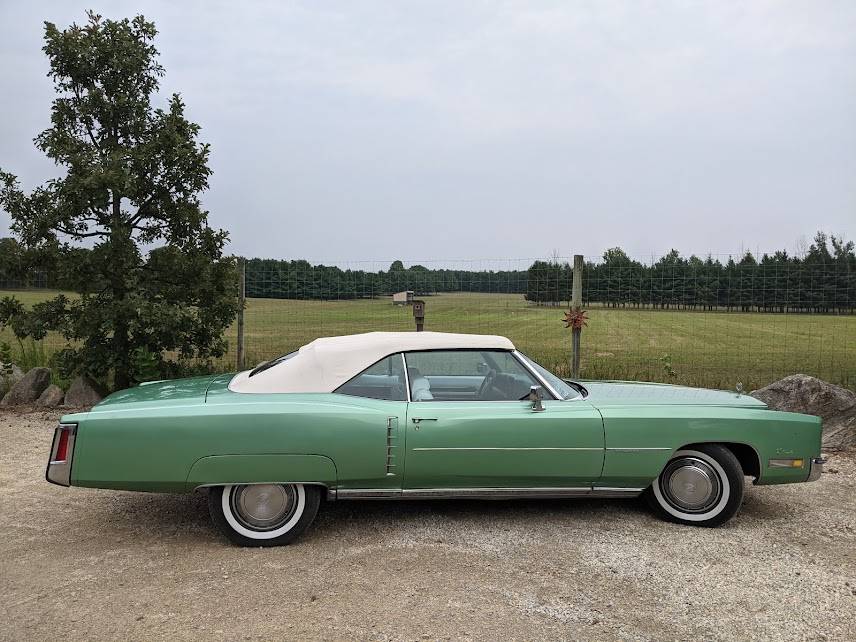 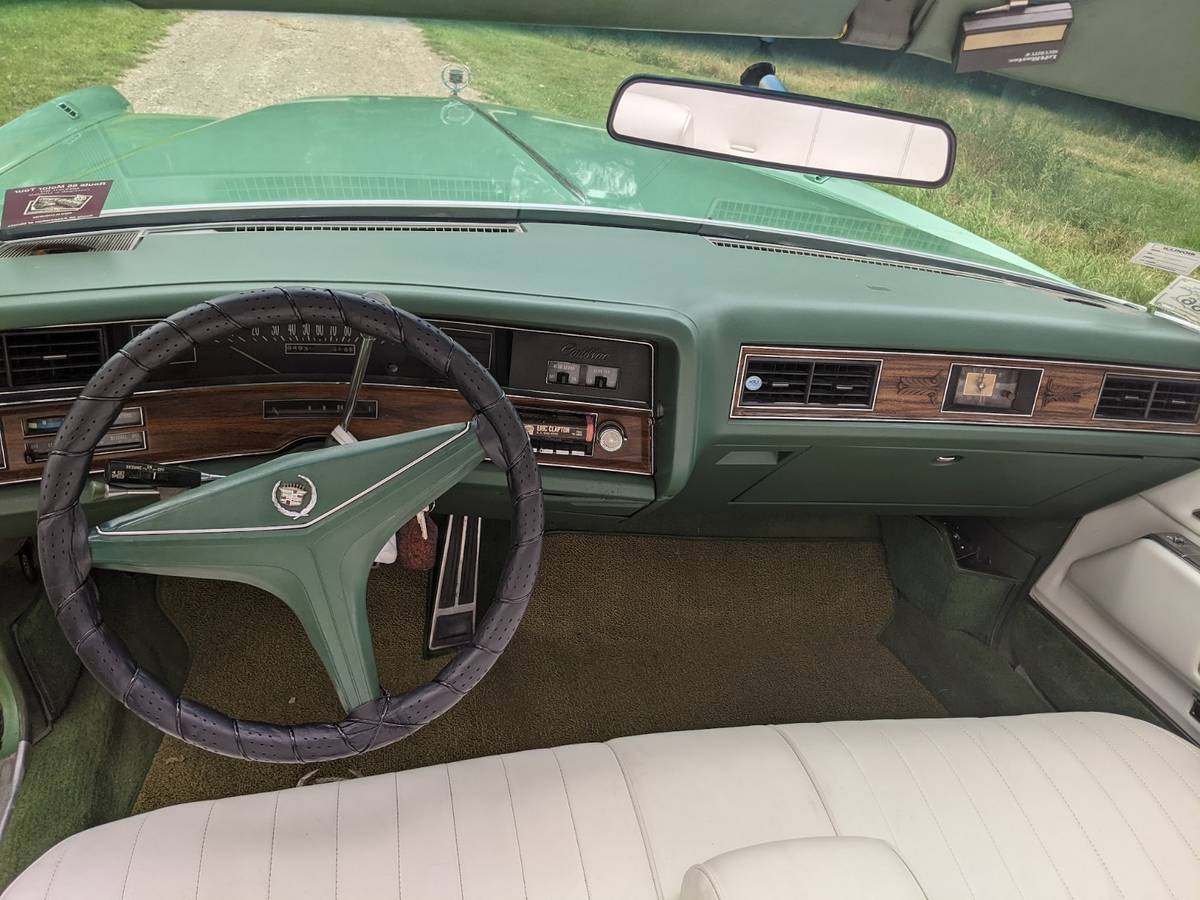 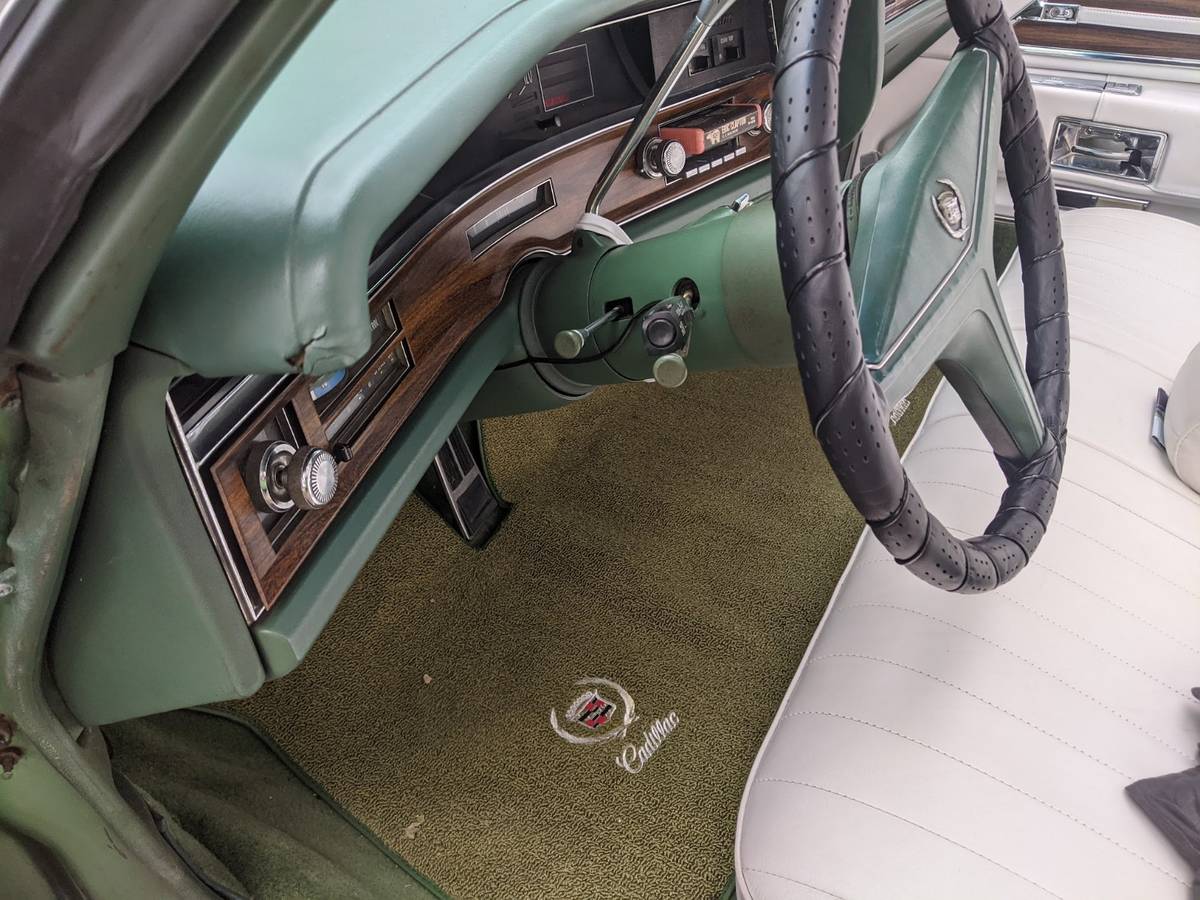 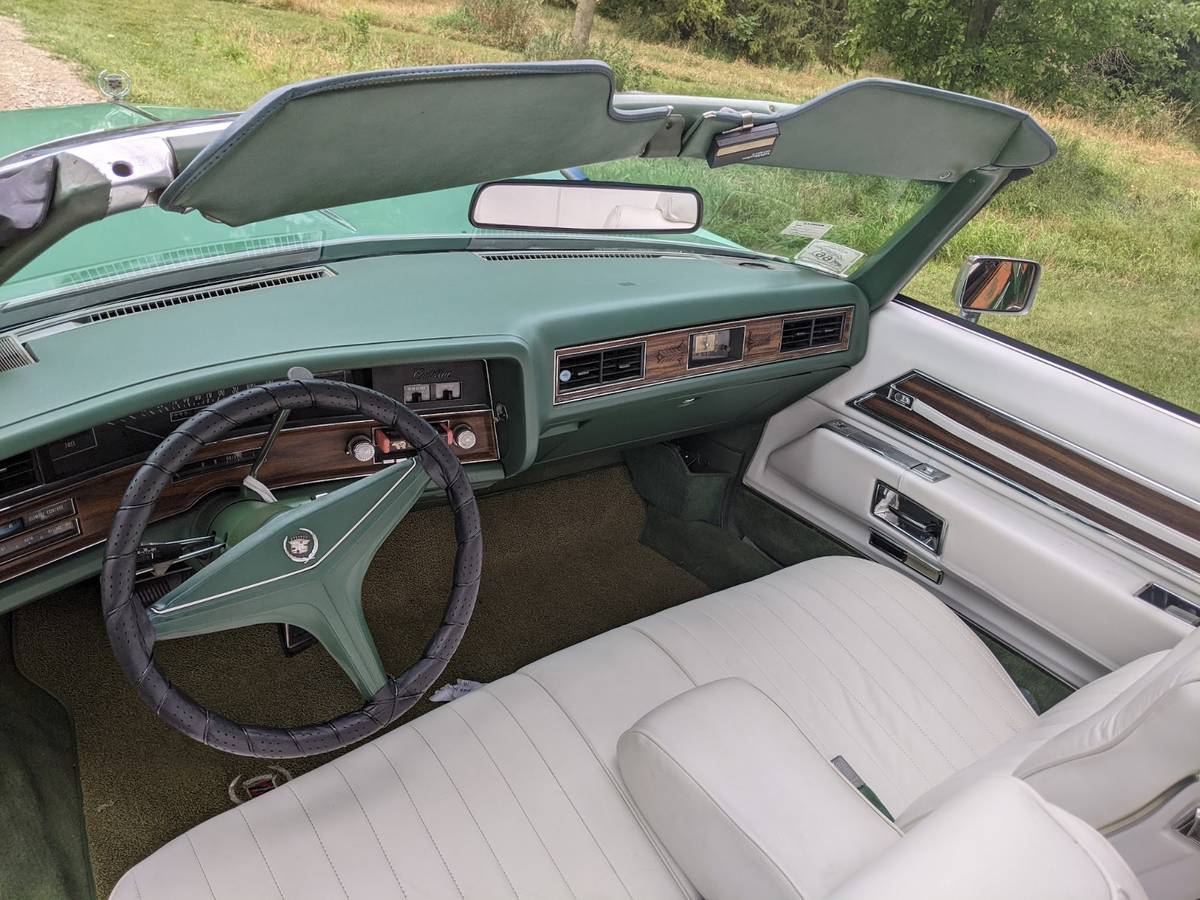 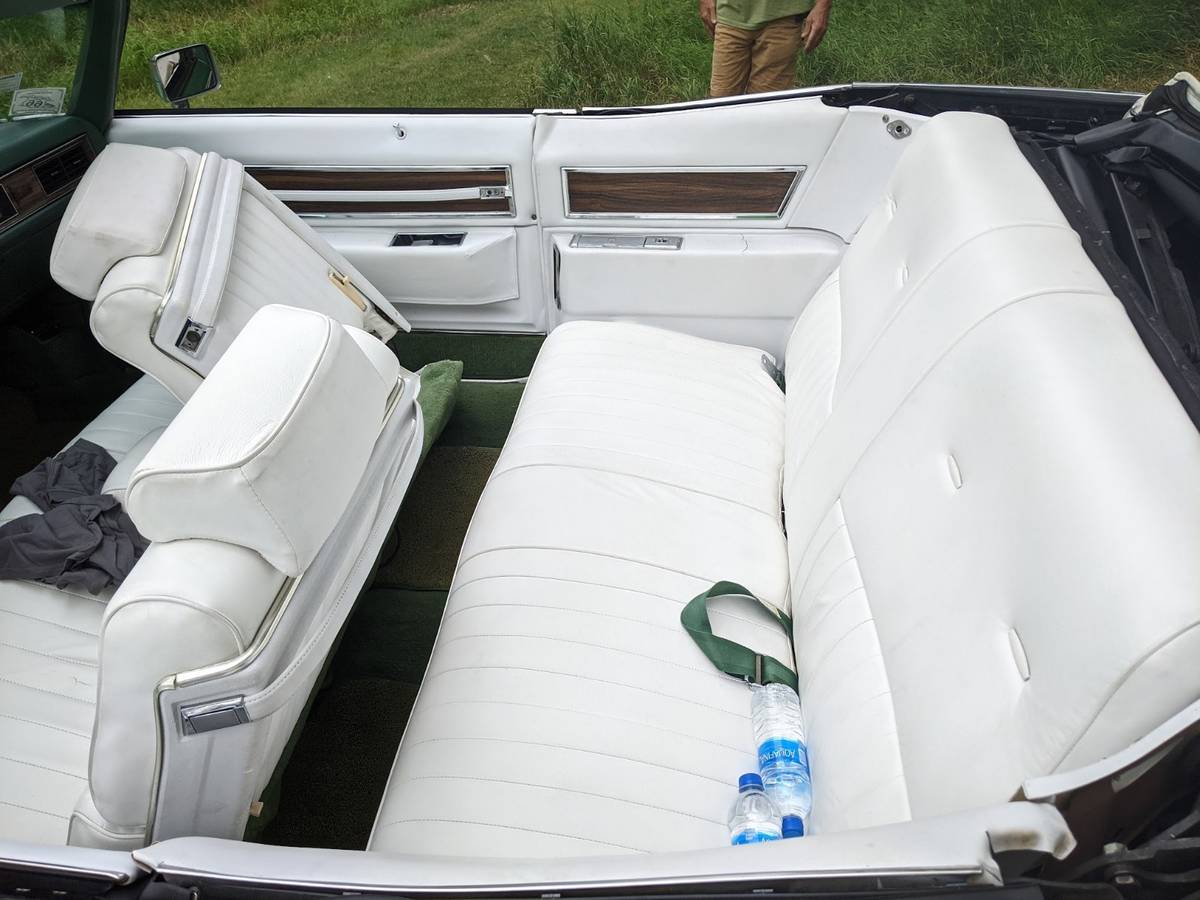 September 22, 2021 Update – We just confirmed the listing for this “Classifind” expired, so with no replacement found we’re assuming this ride “Sold?” While this one got away, please reach out either by email or call us directly if you’d like to be informed when we come across something similar.

August 21, 2021 Update – Just two days after we first featured this Green over white leather Cadillac Eldorado, the seller decided to lower their asking price by $1,000 to the revised price of $18,500.

Among 1971 through 1976, ninth-generation Cadillac Eldorados, we prefer the earlier, pre-safety bumper examples as they looked much tidier despite being a classic American land yacht. This jade green-over white 1972 example originally listed in August 2021 on Craigslist in the western suburbs of Chicago appears to be a nicely updated example now offered at $18,500 (down from the original ask of $19,500). Comparing that price against the Hagerty Insurance Online Valuation Tool confirms the private seller has their TR250 priced between this guide’s #3 “Good” estimate of $14,300 and its #2 “Excellent” appraisal of $31,400. Similarly, the  Collector Car Market Review Online Tool reveals the seller’s ask falls between this guide’s #2 “Very Good” estimate of $16,000 and its #1 “Excellent” appraisal of $26,800.

Inside, there was a new curved instrument panel and redesigned seats. A fiber-optic “lamp monitor” system, which displayed the functionality of the headlamps, parking lamps, tail lamps, brake lights, and turn signals was mounted on each front fender and the shelf below the rear window. This 126.3-inch wheelbase version Eldorado would run through 1978, receiving major facelifts in 1973, 1974, and 1975. Sales in 1971 set a new record at 27,368. Changes were minimal for 1972 as sales rose to 40,074 that year.

The YouTube Channel Auto Moments provides a great overview of a similar 1972 Eldorado as well as a point-of-view of what it is like to drive these magnificent land yachts:

With presentable paint, a newer top, and a white leather interior, there is a lot to love about this classic front-wheel-drive, flat-floored, convertible land yacht.

Show or go: what would you do with this Eldorado convertible?  Comment below and let us know!