September 1, 2021 Update – We did not receive a winning bid during this motorcycle’s auction, so the seller decided to try to sell it elsewhere. We appreciate him giving us the first crack at selling what is a very cool garage find!

Reserve Meter – the green bar indicates how close the high bid is to the seller’s reserve price. When the green bar is full, the reserve has been met. As this is a No Reserve auction, the highest bidder at the end becomes the new caretaker of this Gold Wing Garage Find! 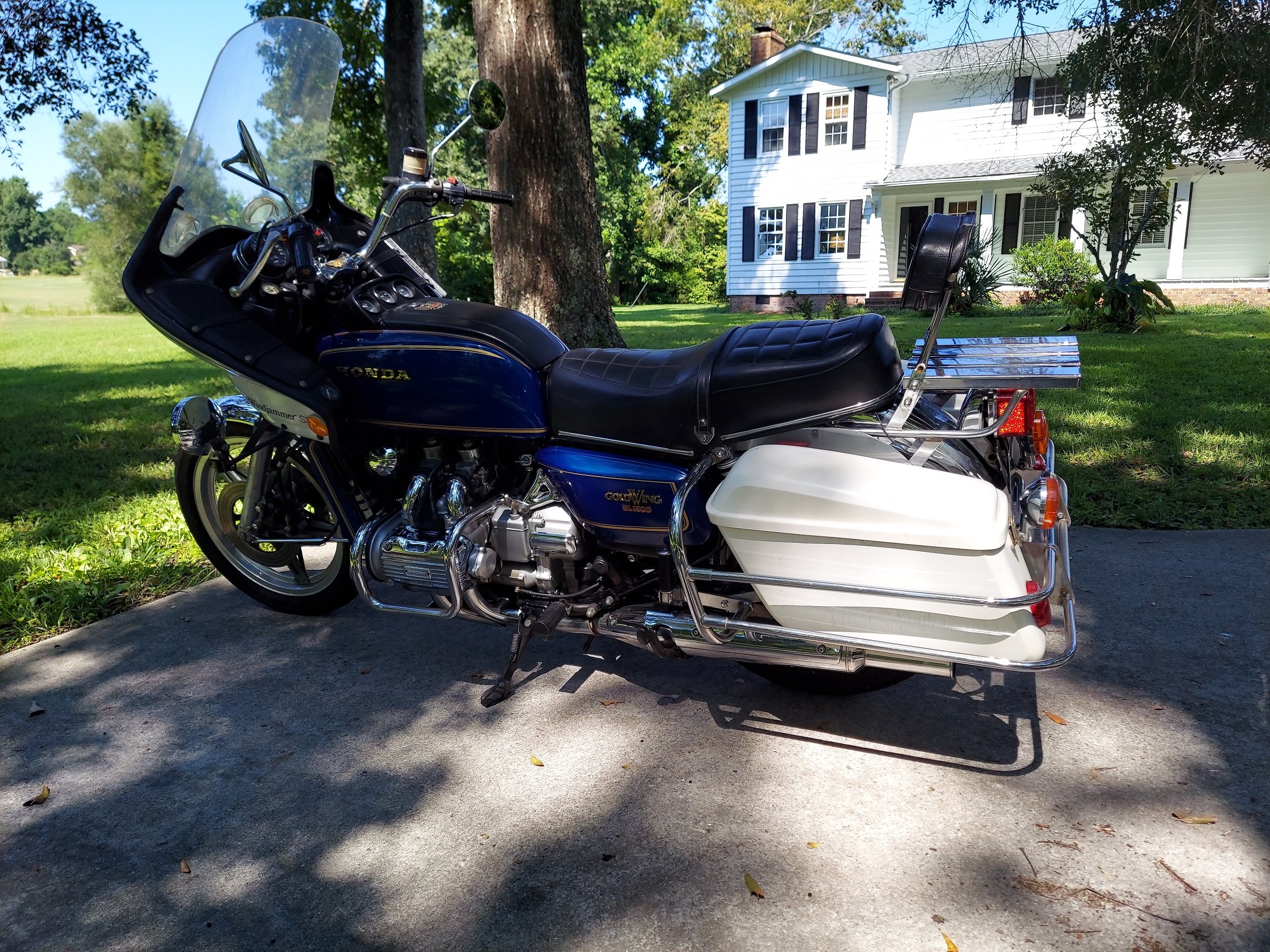 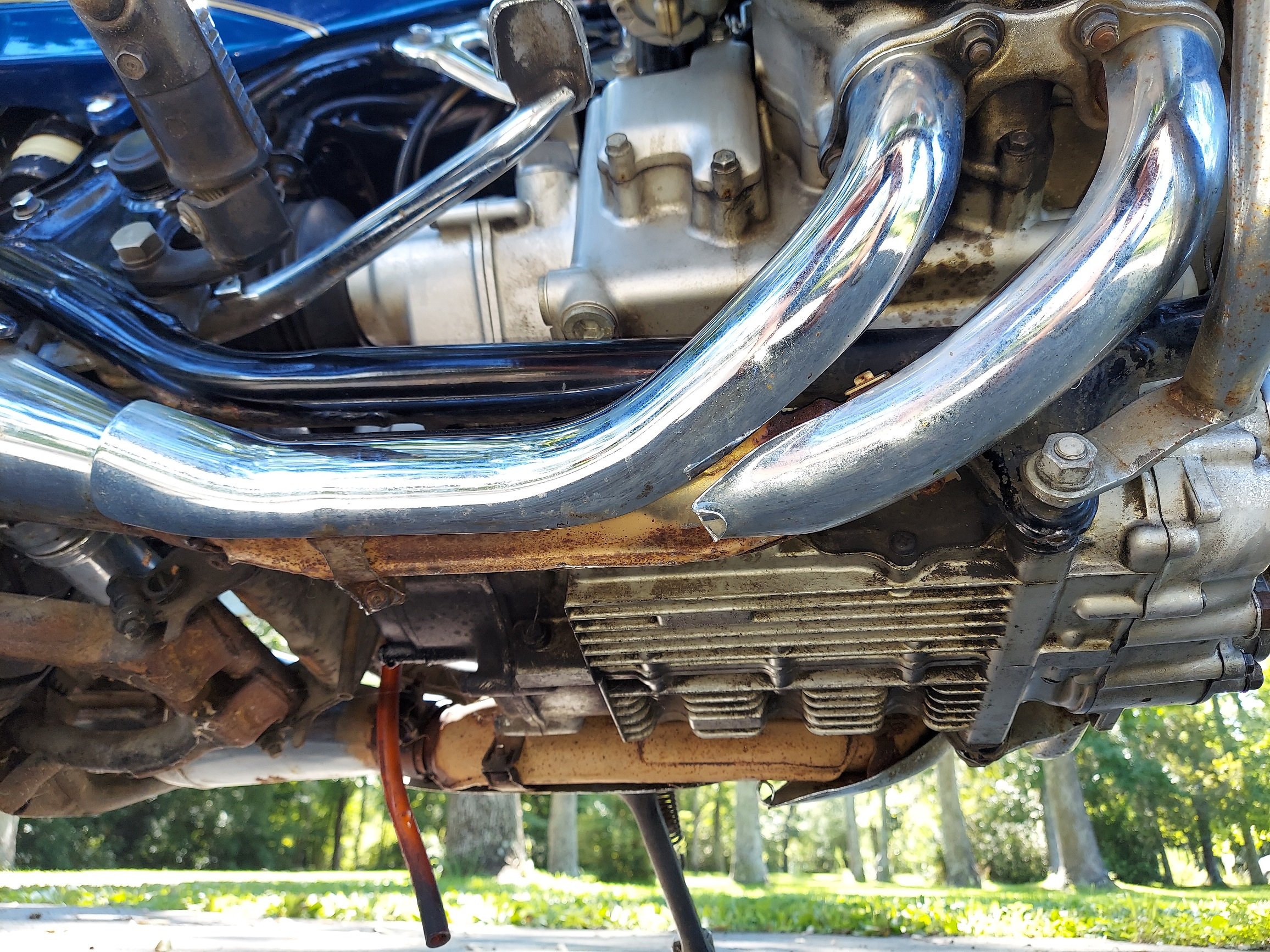 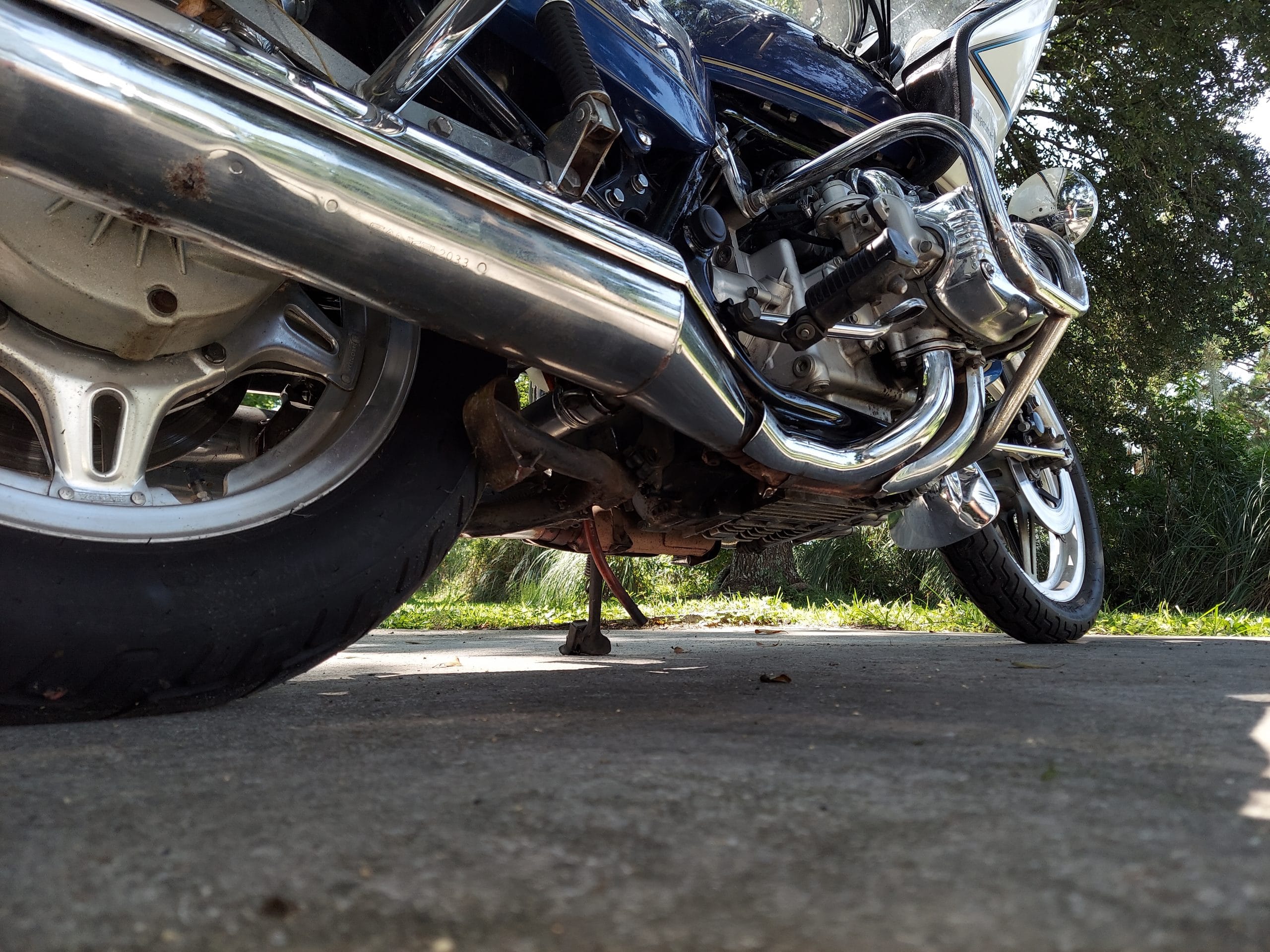 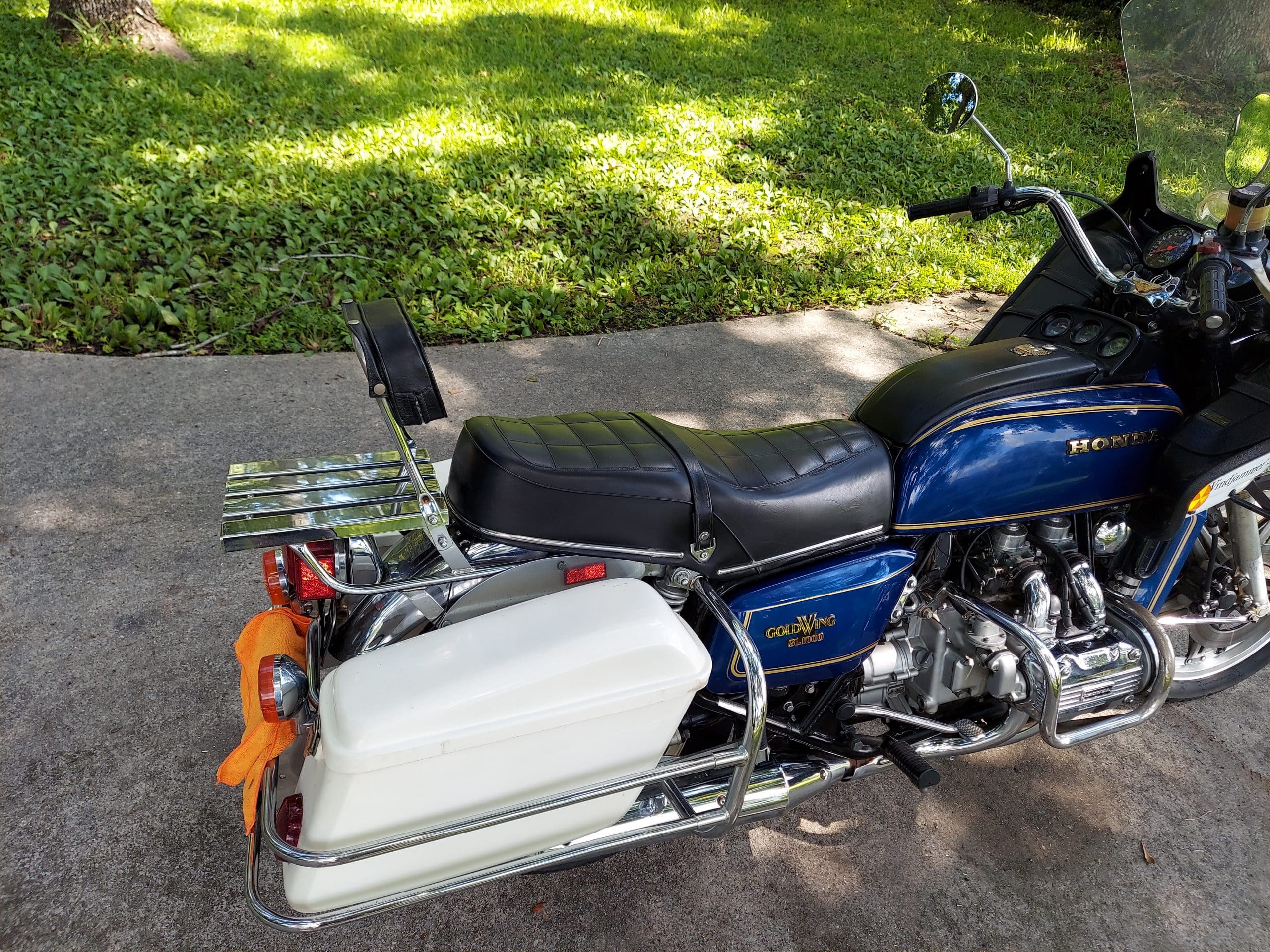 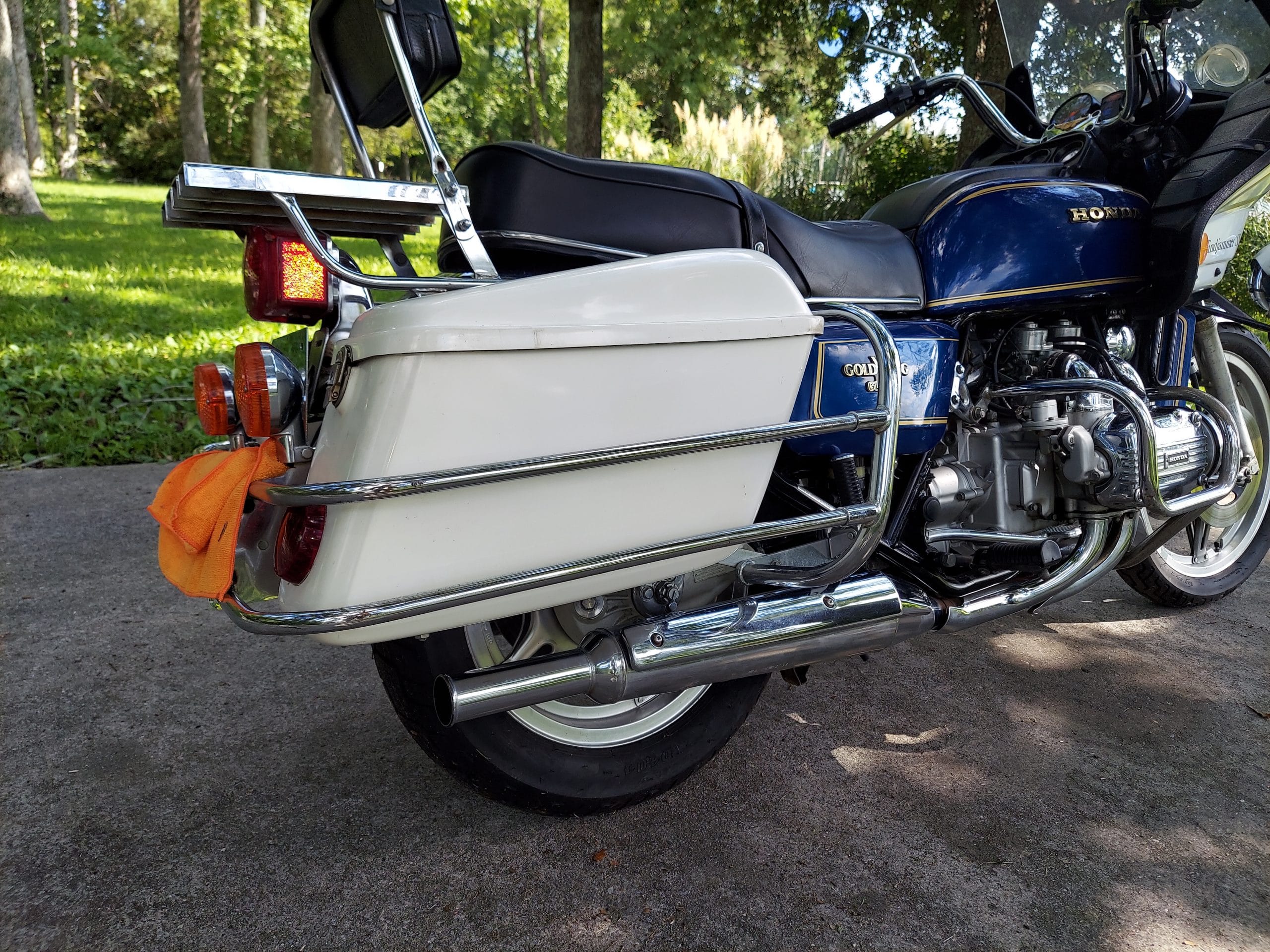 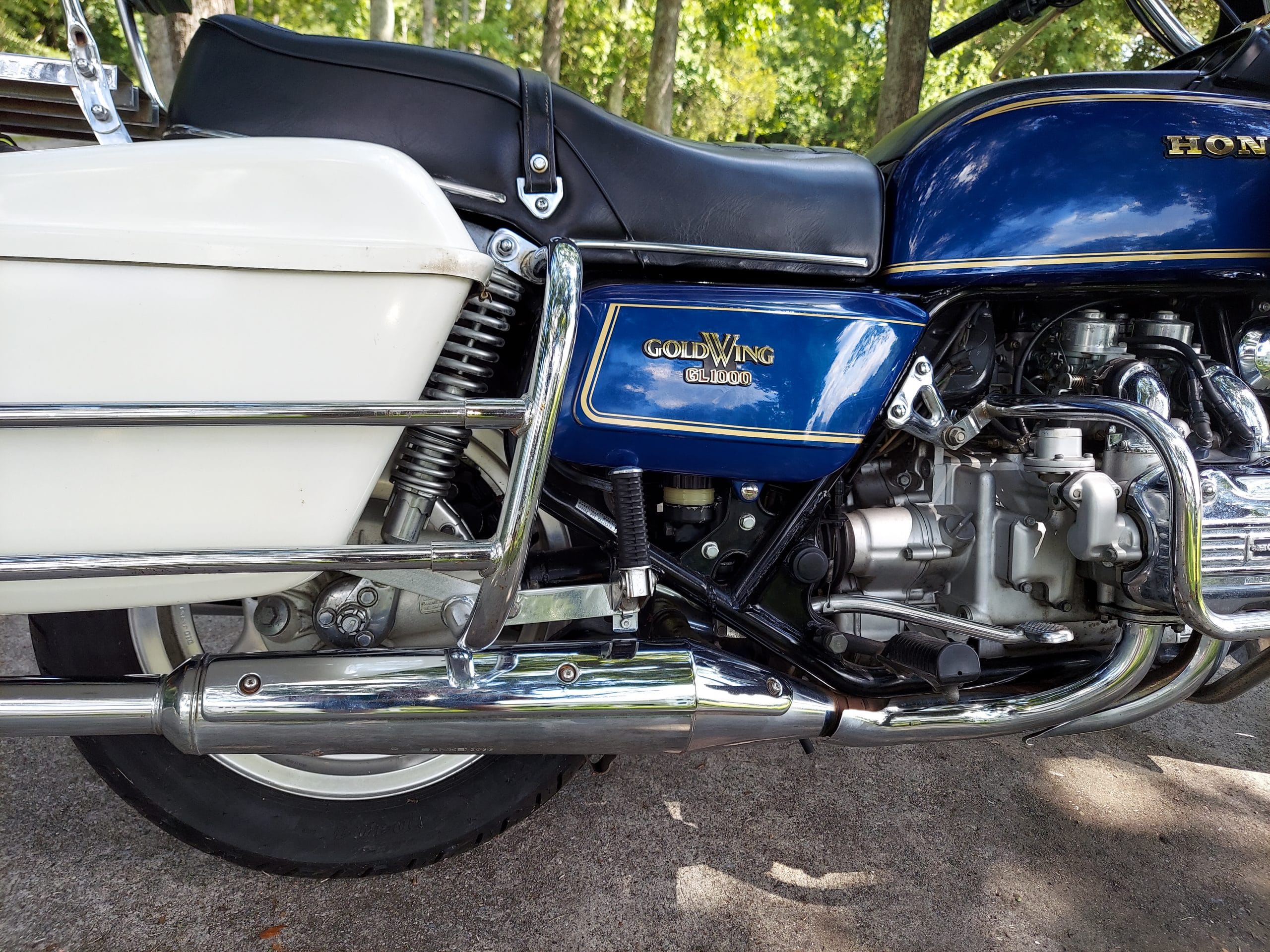 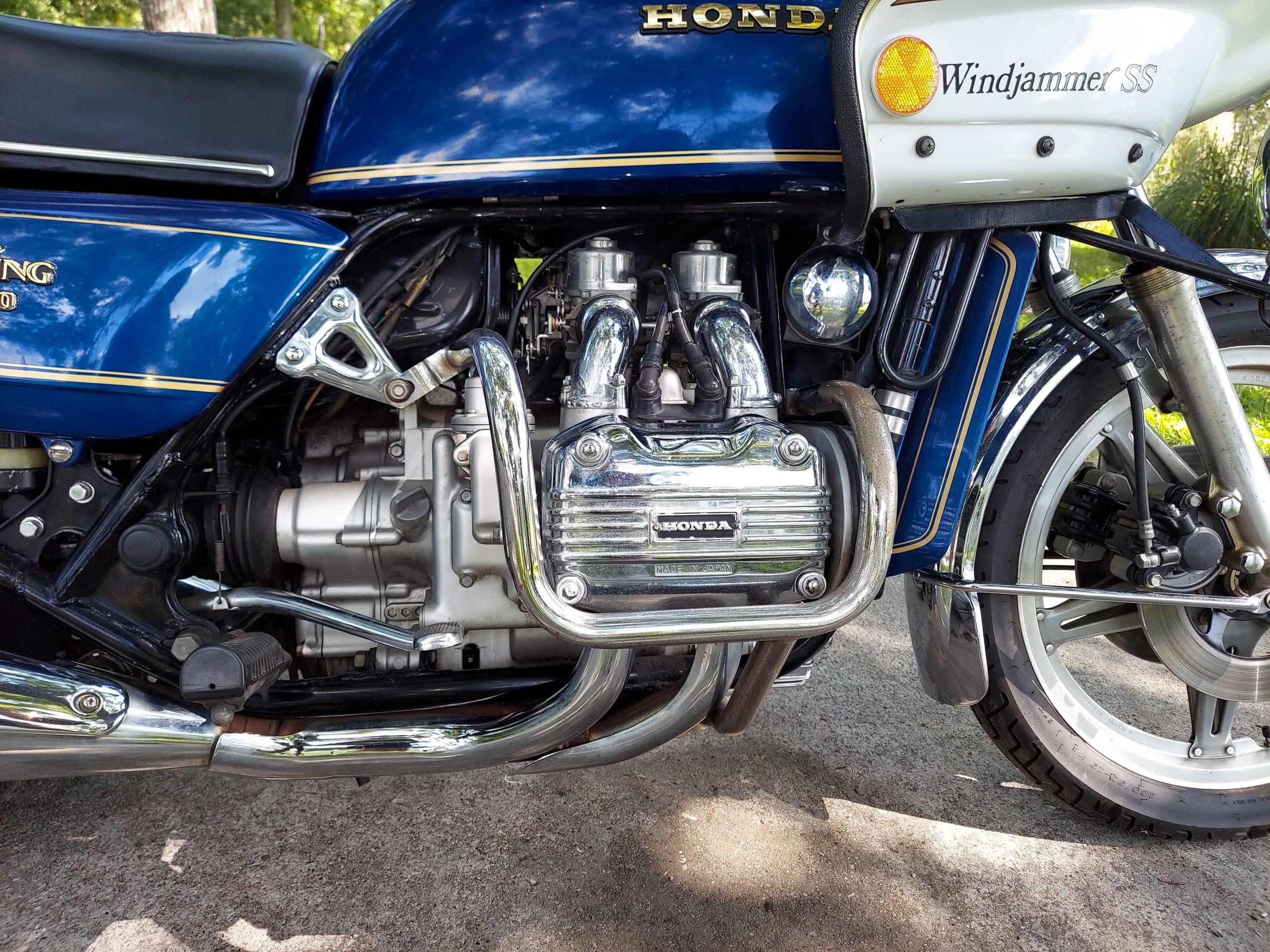 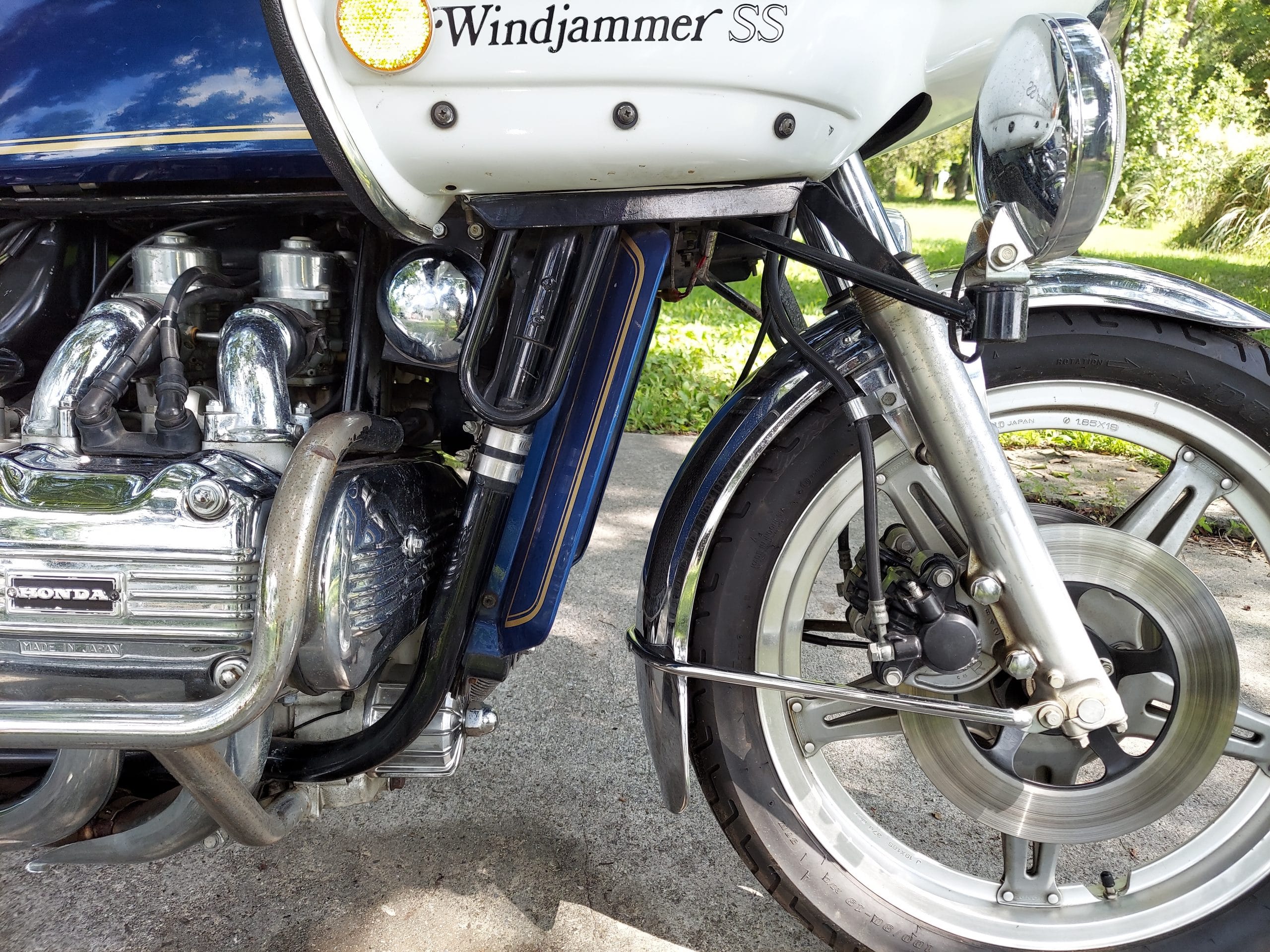 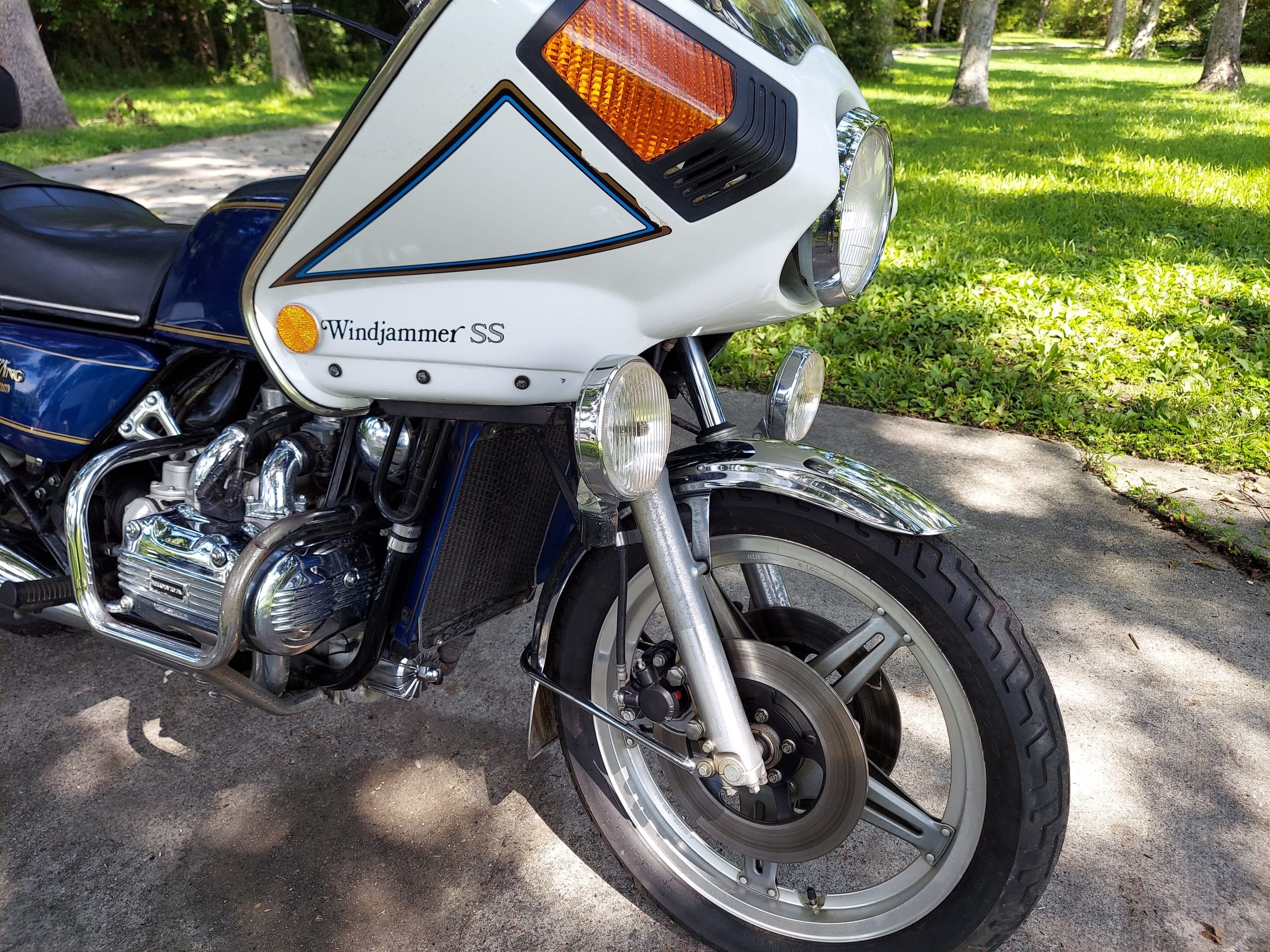 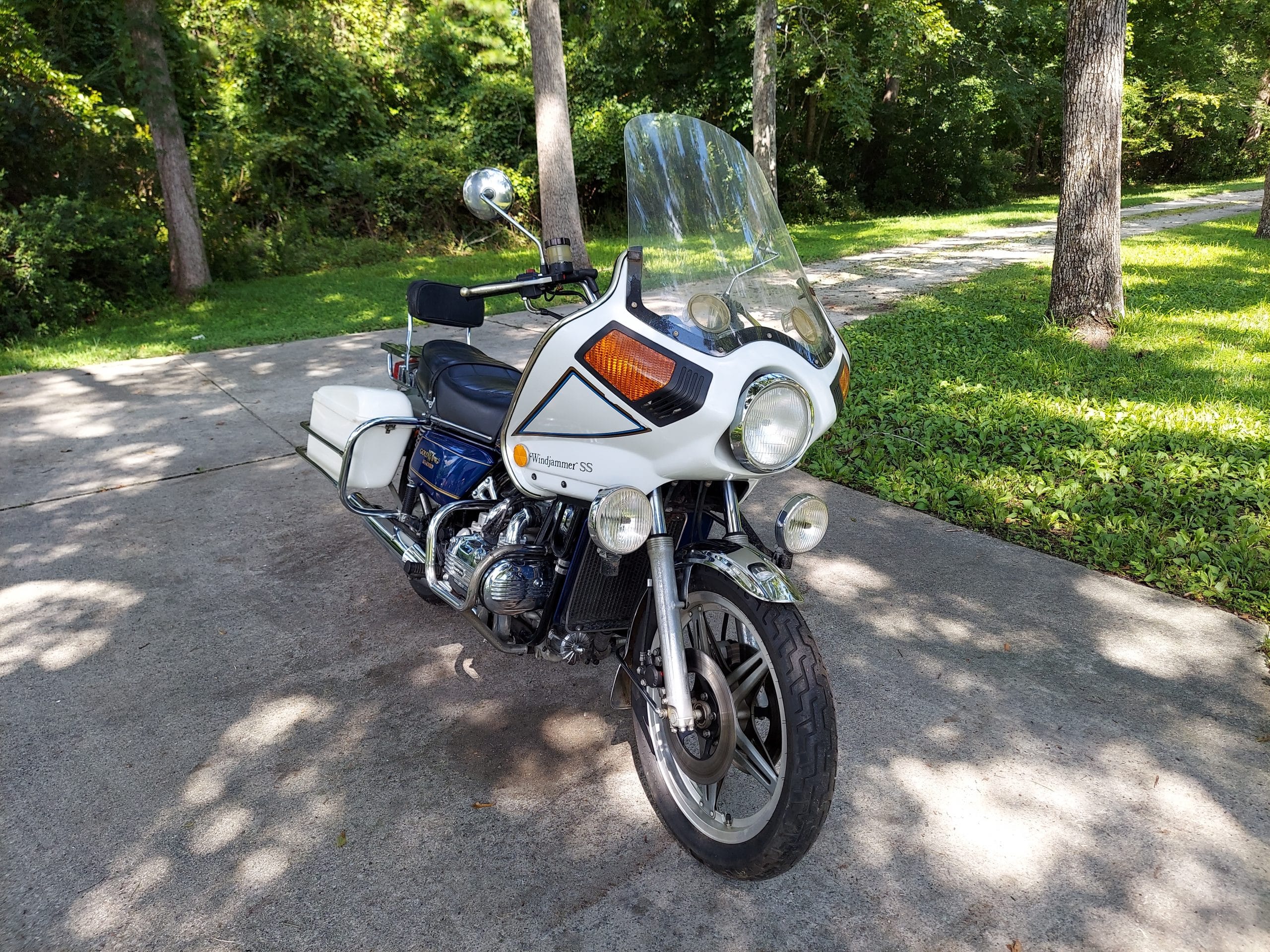 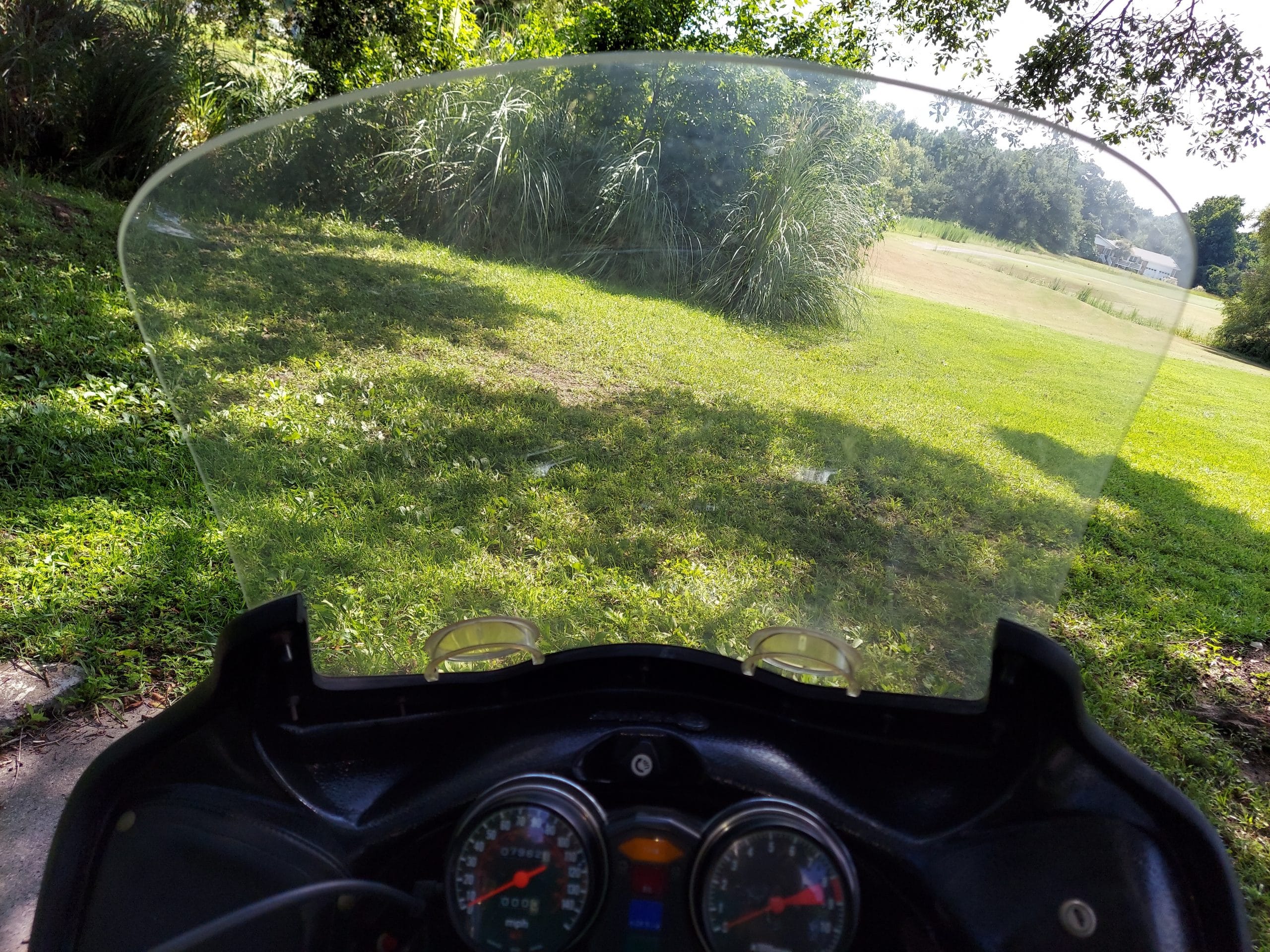 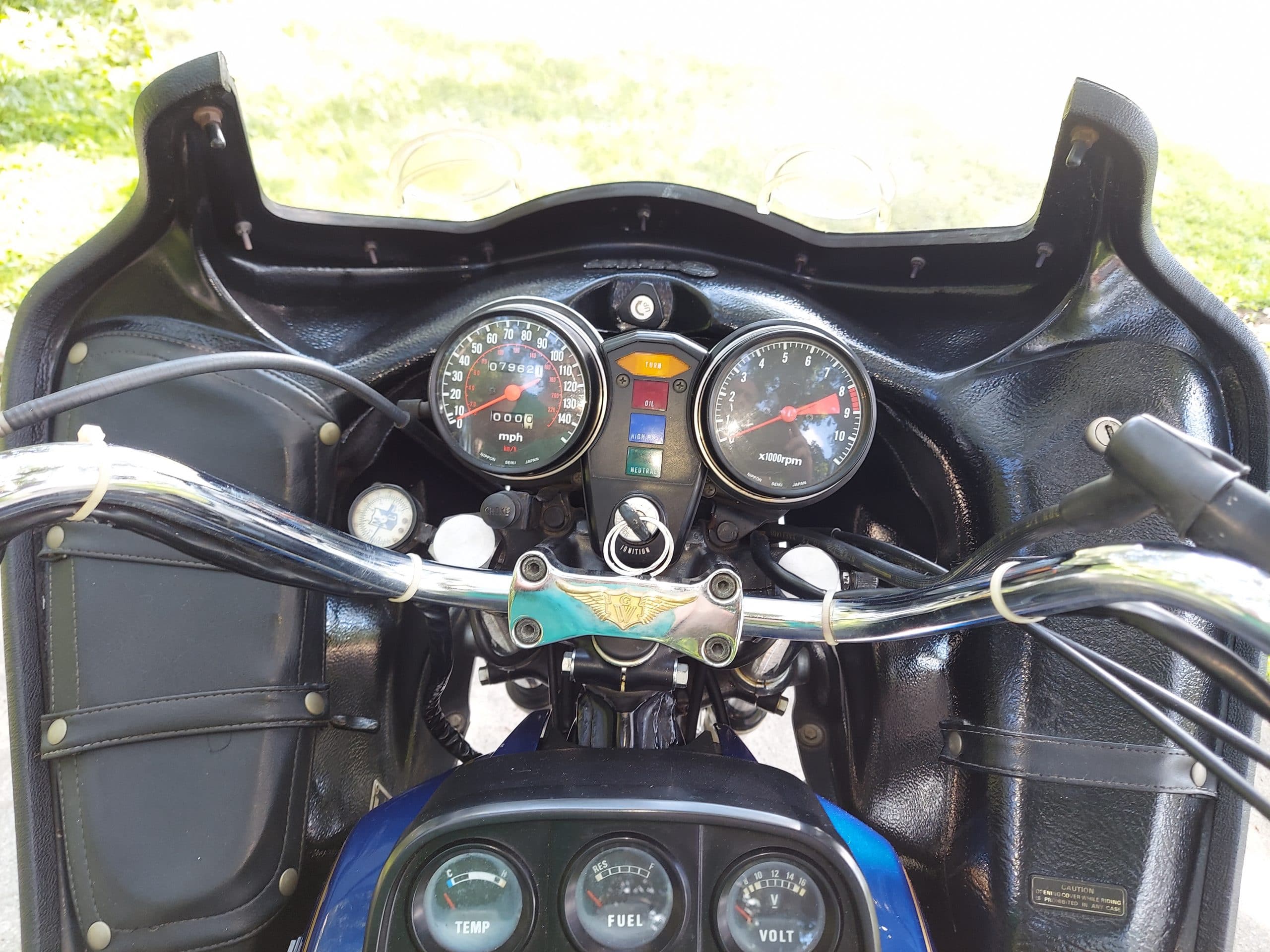 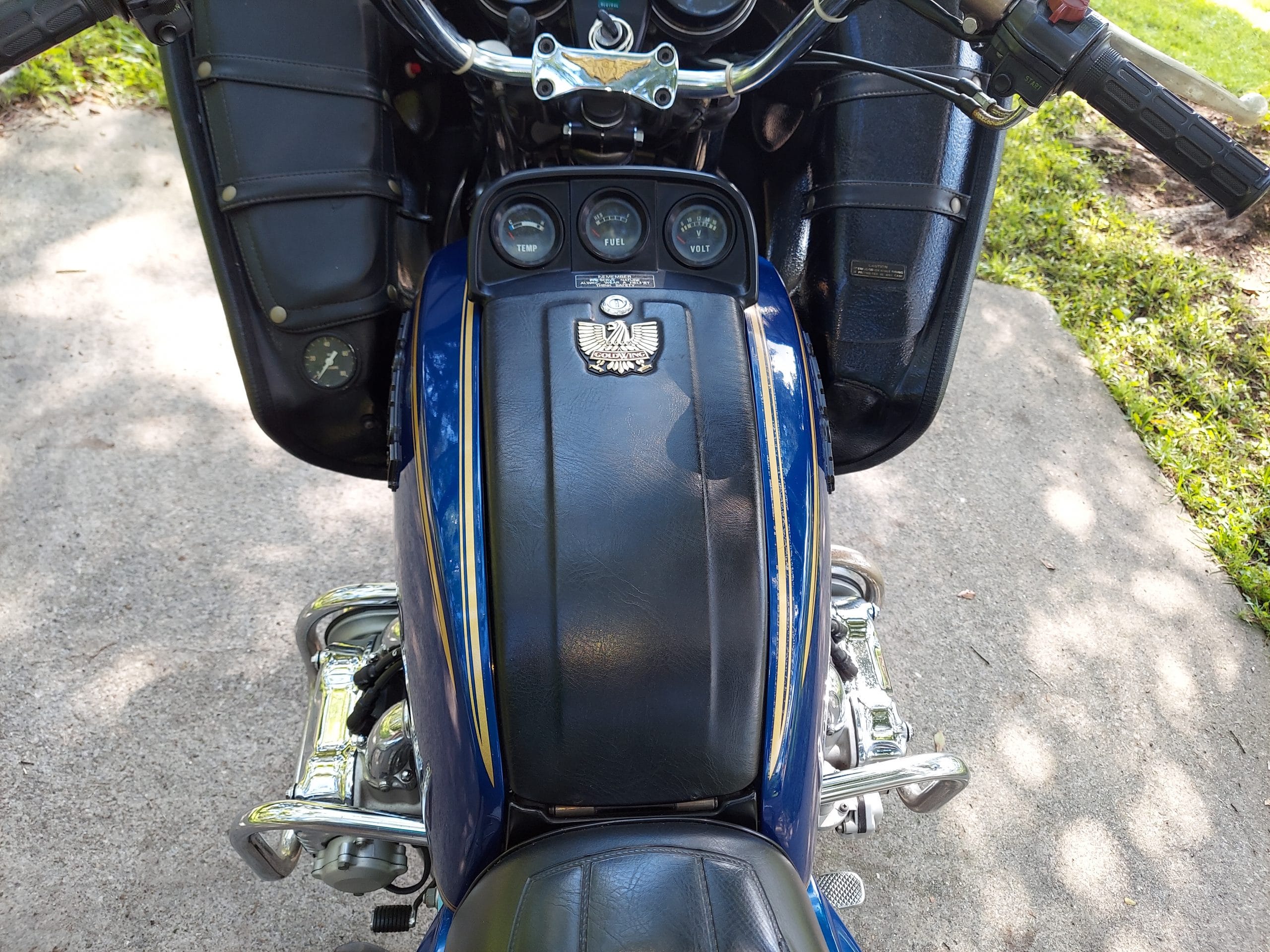 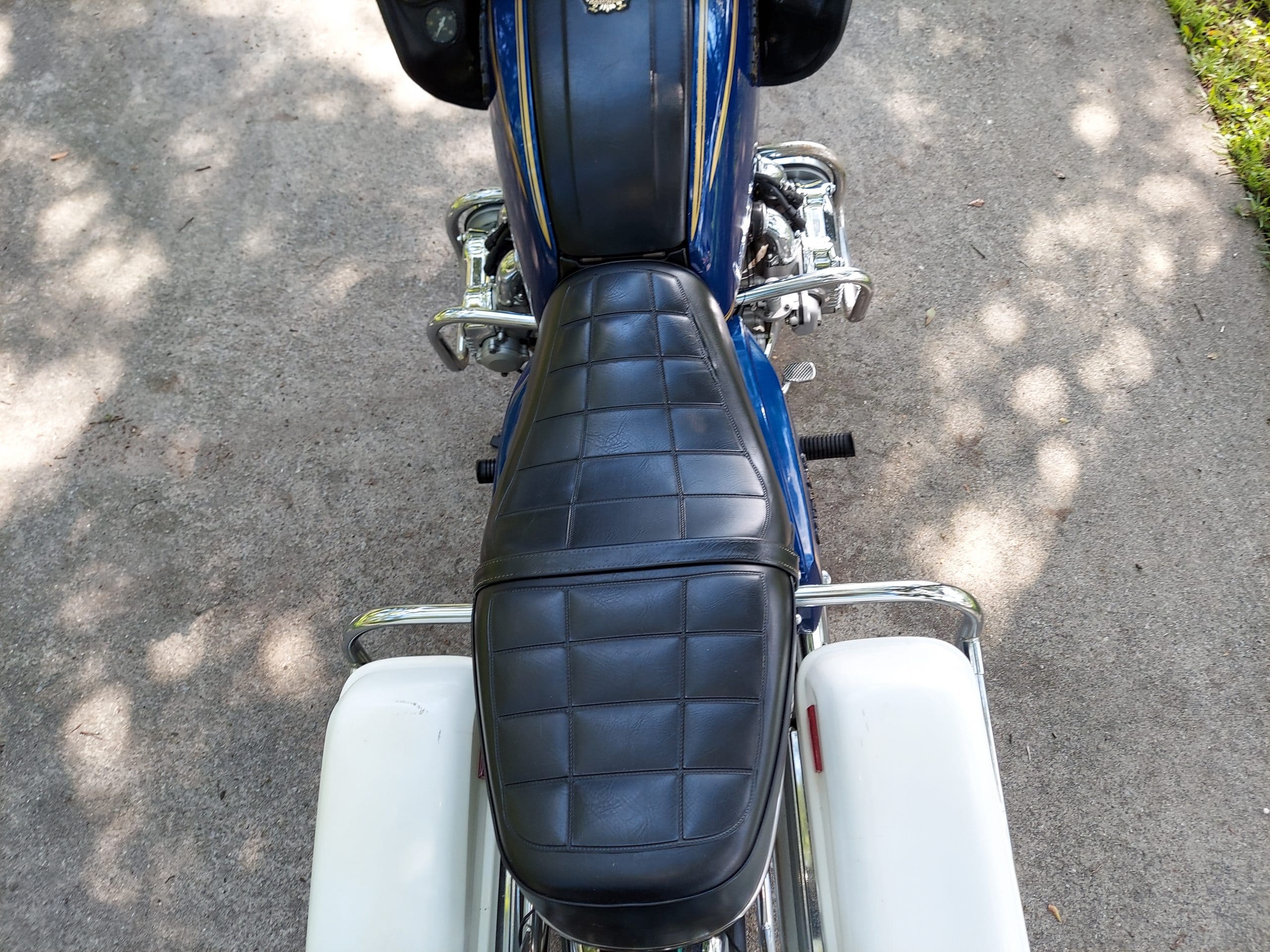 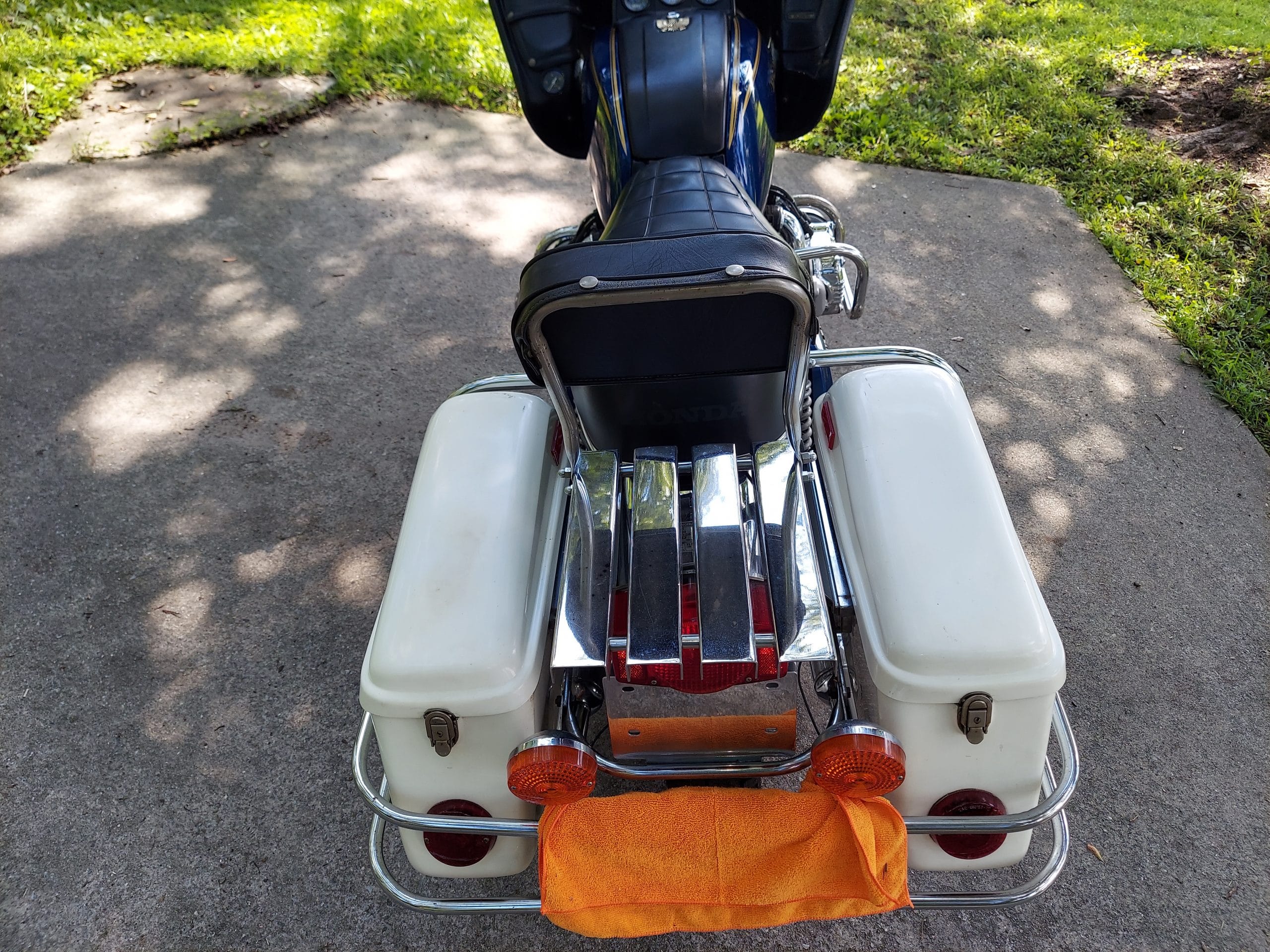 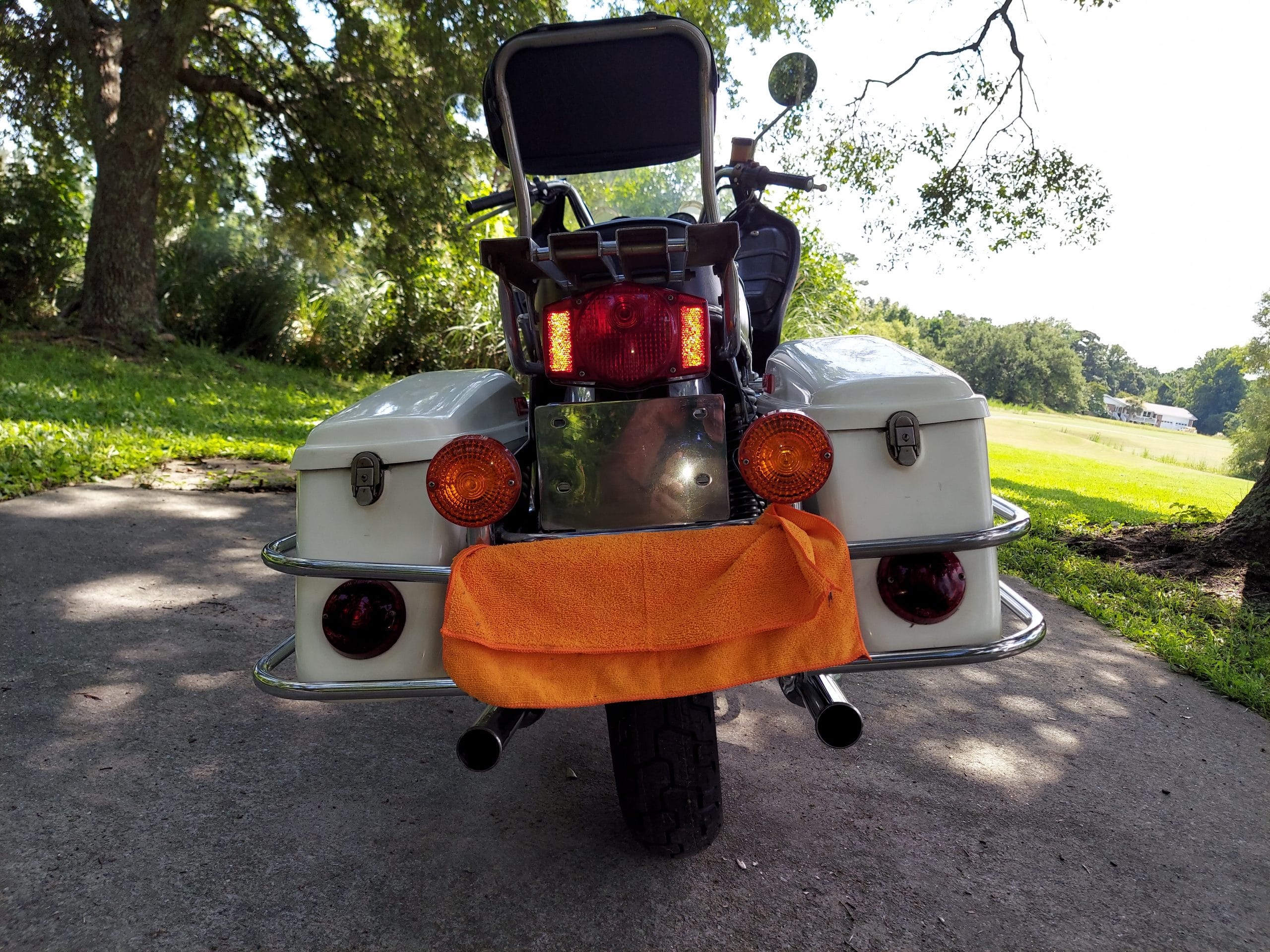 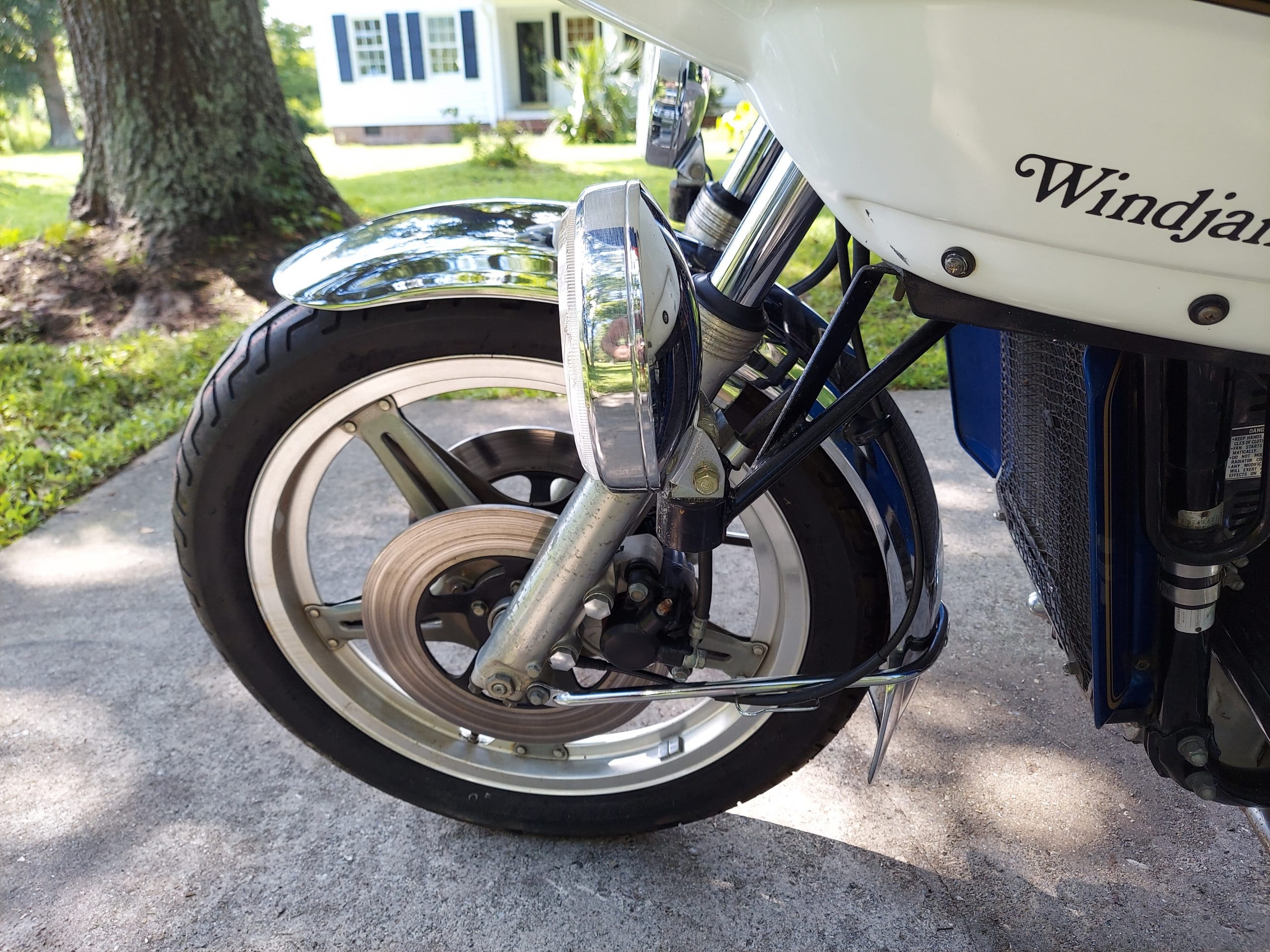 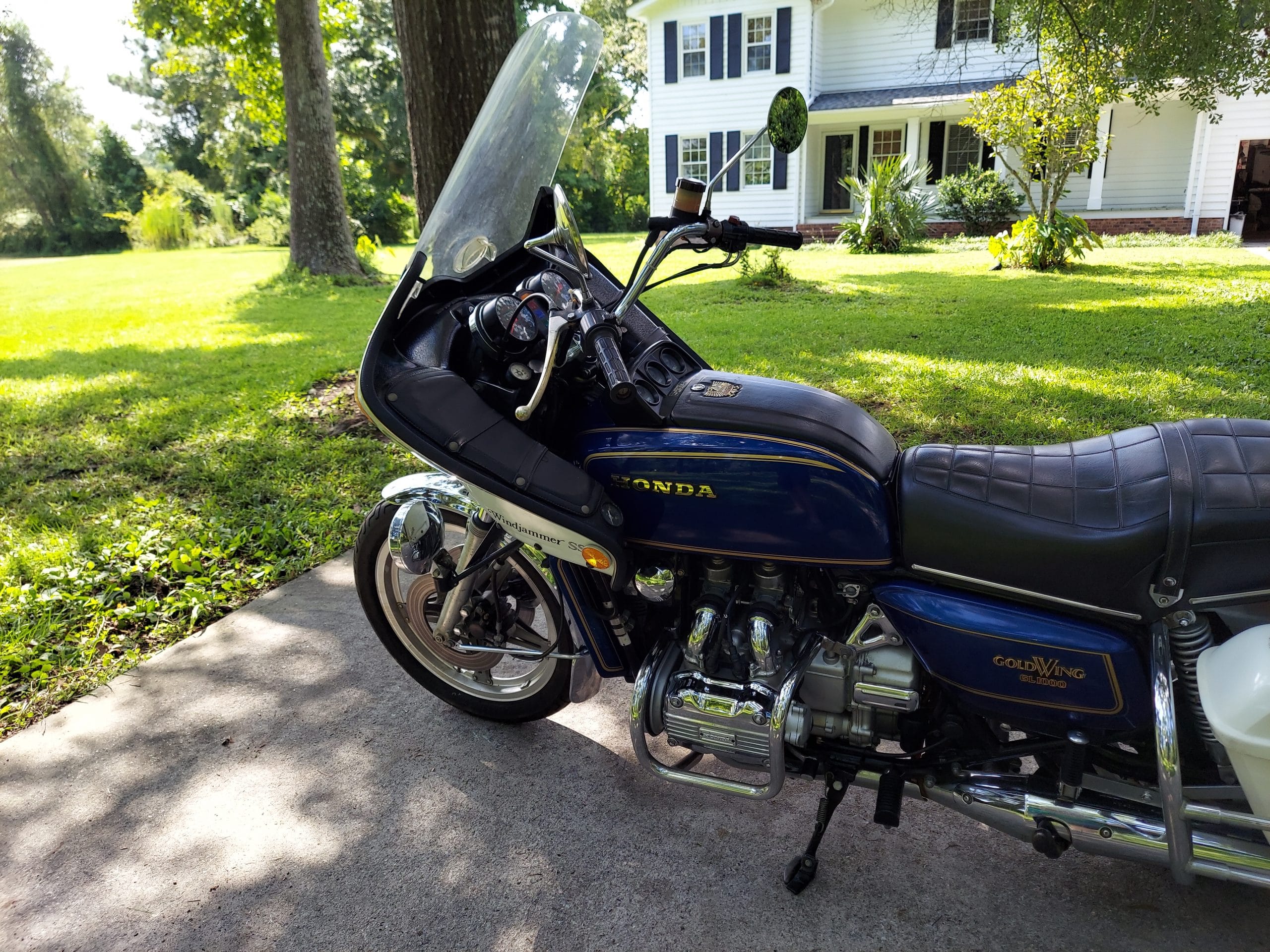 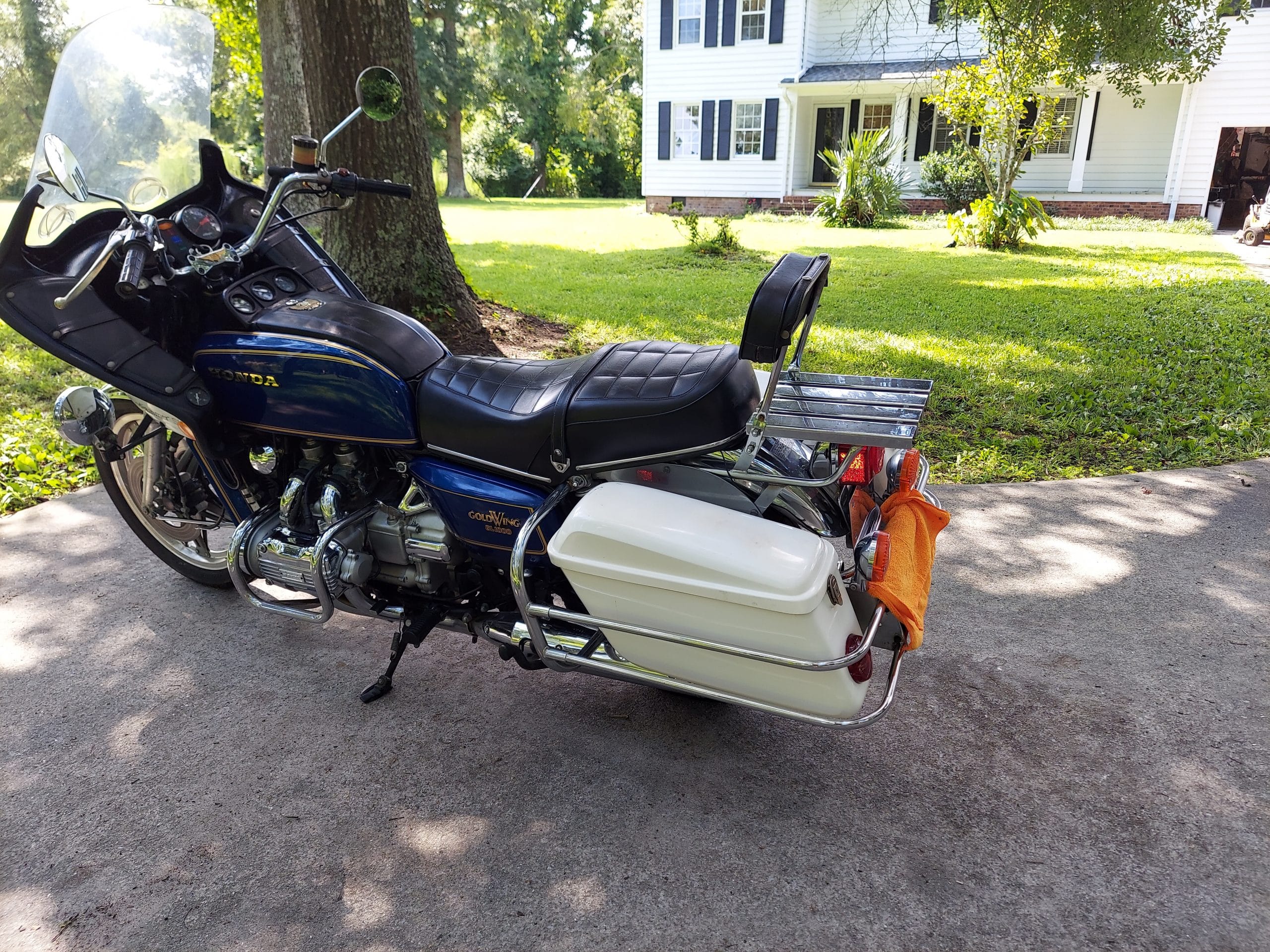 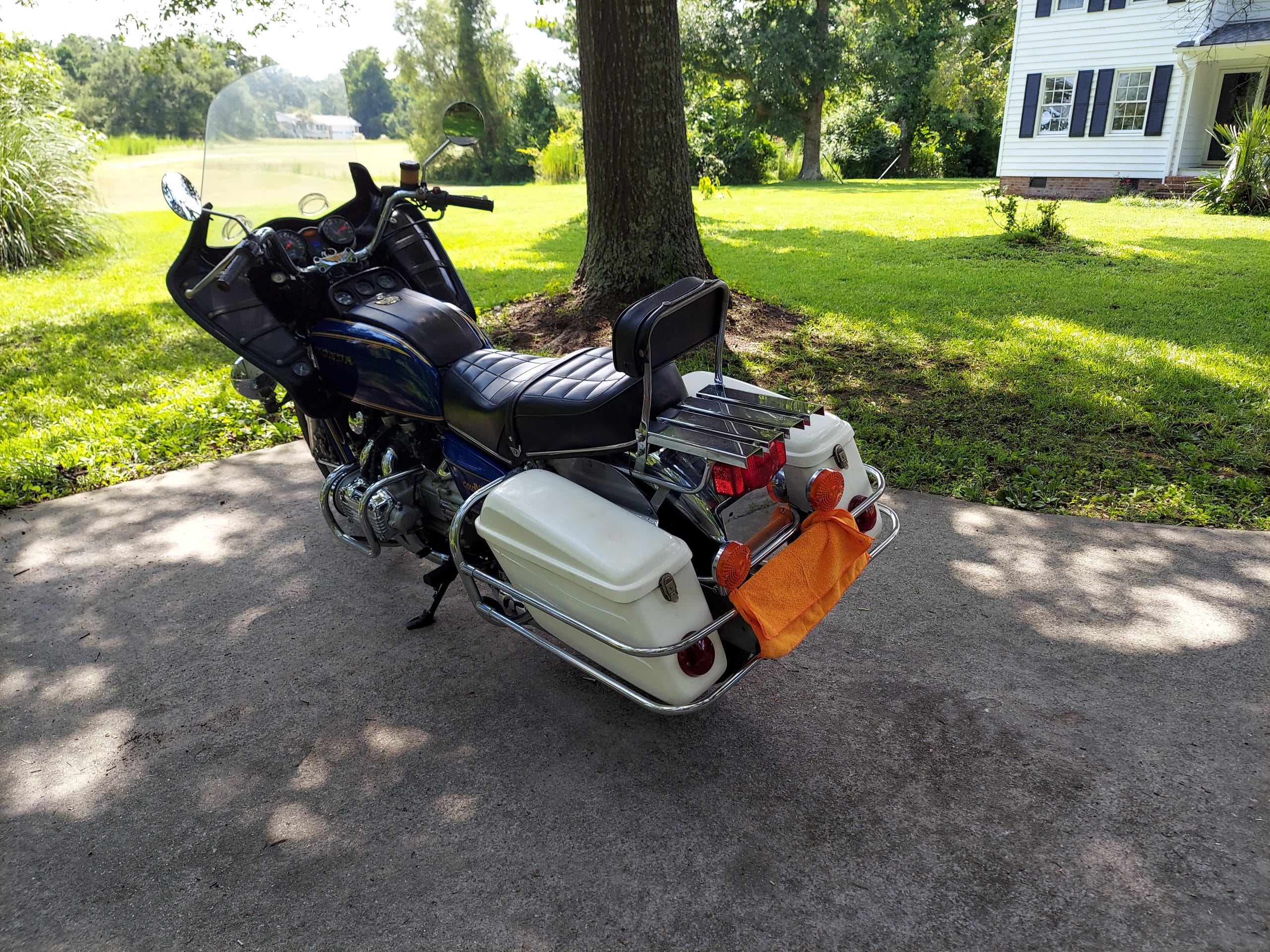 In 1972, following the success of its ground-breaking CB750 superbike, Honda assembled an R&D design team to explore concepts for a new flagship motorcycle. The project leader was Shoichiro Irimajiri, who rose to fame in the 1960s for his designs of Honda’s MotoGP engines and Formula One powerplants.

Initially, Honda envisioned the Gold Wing as a large sport motorcycle, but upon learning that many potential customers, particularly those in America, enjoyed long-distance touring, the design team reconsidered the bike’s design objectives.  Specifically, in the early 1970s, long-distance motorcyclists had only a few manufacturers (Harley-Davidson, Moto Guzzi, or BMW) to choose from. Harley-Davidson’s Electra Glide was a comfortable, high-maintenance, and high-vibration motorcycle with a loyal cult following. It faced strong competition from Moto Guzzi’s 850cc Eldorado. BMW motorcycles were smoother and more reliable, albeit expensive. Other large Japanese motorcycles, such as the Honda CB750 and the Kawasaki Z1 were cheaper but were not ideal tourers with their small fuel tanks and rear drive chains needing regular maintenance.

Hoping to capitalize on this emerging market opportunity, Honda designed its Gold Wing for a new kind of American long-distance rider not likely to buy a Harley-Davidson or BMW but who would open their wallets for an affordable machine offering comfort, endurance, low-maintenance and a smooth, torquey, quiet engine. The result was Honda’s launch of the 1974 Gold Wing with its flat-four shaft-drive powertrain incorporating technologies developed from their earlier motorcycle and automotive designs. The Gold Wing was the first Japanese production motorcycle with a water-cooled four-stroke engine.

For the 1978 model year, Honda modified the Gold Wing into the GL 1000 K3 model. Specifically, engineers reduced the carburetor sizes by one millimeter to make more torque available at lower engine speeds. Additionally, K3s feature a redesigned exhaust system combined with altered valve and ignition timing. Engineers removed the kick-start mechanism from the engine, as well as a reserve lighting module for the headlight and taillight from the electrical circuit. Designers placed a small instrument panel appeared on top of a restyled dummy fuel tank. Engineers replaced traditional wire-spoke wheels with Honda’s new ComStar wheels, but the existing tires with inner tubes remained. The dry weight of the Gold Wing 1000 K3 was just over six hundred pounds.

The current caretaker of the 1978 Gold Wing offered here recently purchased the bike with the intent of making it a custom “Bobber.” However, upon inspection just before purchase, the seller realized his three-owner garage find was too nice of a survivor to carry out his goal. Consequently, he’s now offering it for sale at no reserve with the hope of finding a vintage Honda Goldwing enthusiast looking for a stock survivor example.

While this Gold Wing features fresh tires and starts right up, the seller strongly recommends the buyer of this bike going through and refreshing all of the fluids as well as performing a timing belt replacement before venturing on any long-distance rides. This Gold Wing’s water-cooled flat-four features an upgraded electronic ignition one of three prior owners installed. We love the period-correct Windjammer fairing that increases rider comfort over long tourers.

To help you make informed bids, we’re providing a link to the Hagerty Insurance Online Motorcycle Valuation Tool.  Based upon the pictures shown in the pictures combined with the seller’s description, we rate this Gold Wing a #3 “Good” condition bike that with a fluid refresh and thorough detailing could easily promote it to #2 “Excellent” condition survivor-quality motorcycle. 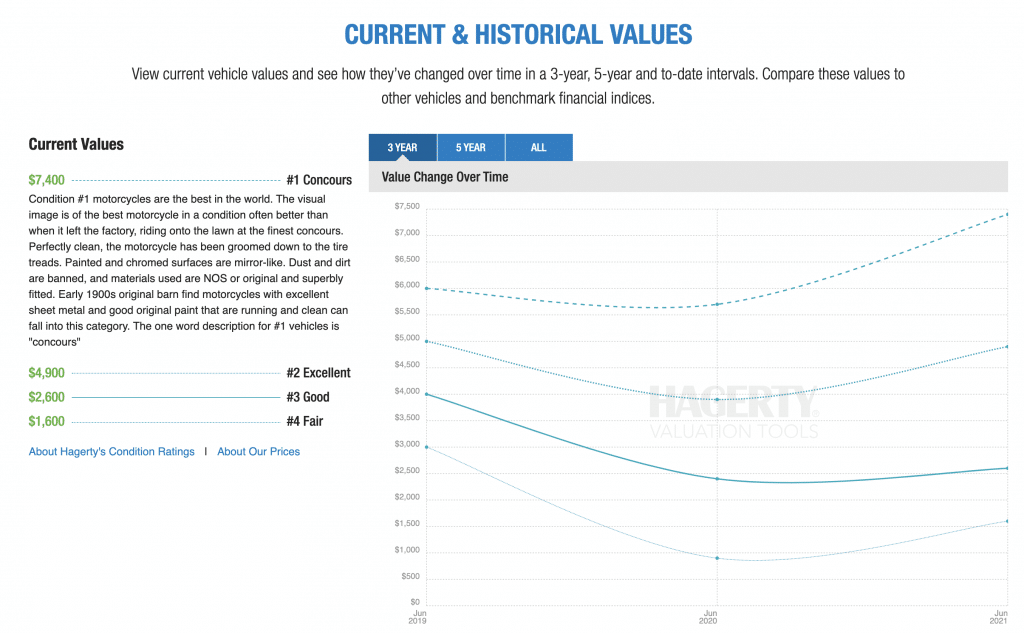 If you have any questions about this 1978 Honda Gold Wing GL1000, please leave a comment below or feel free to call Rudy directly at 877-468-6497.  Thank you for looking and happy bidding!