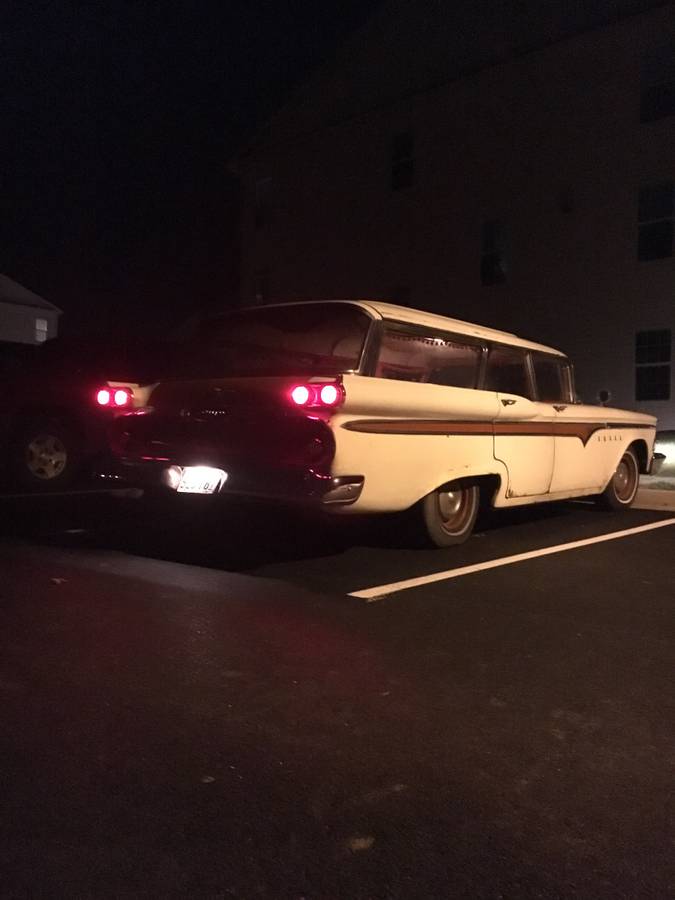 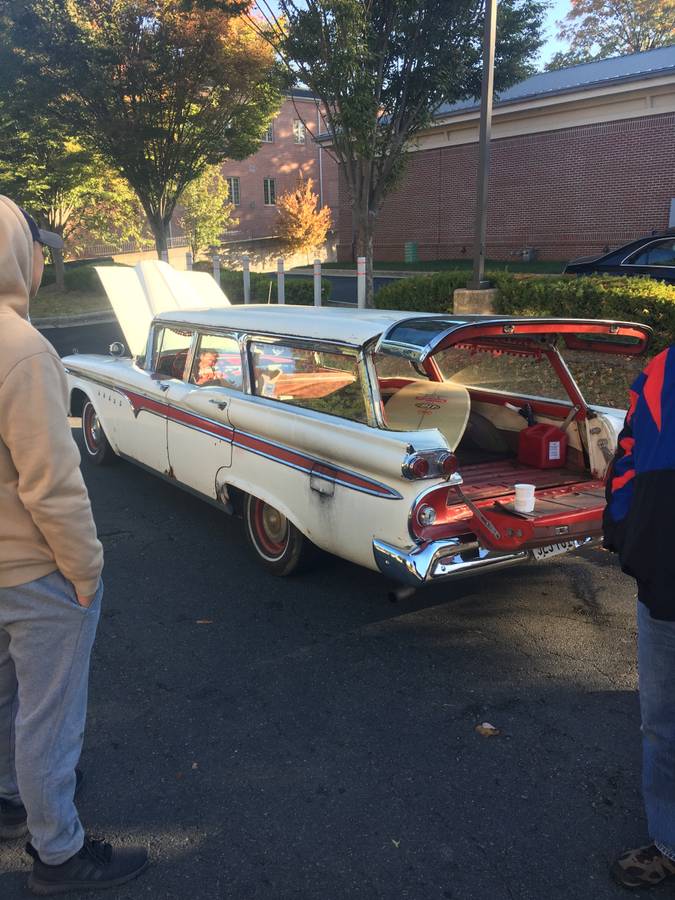 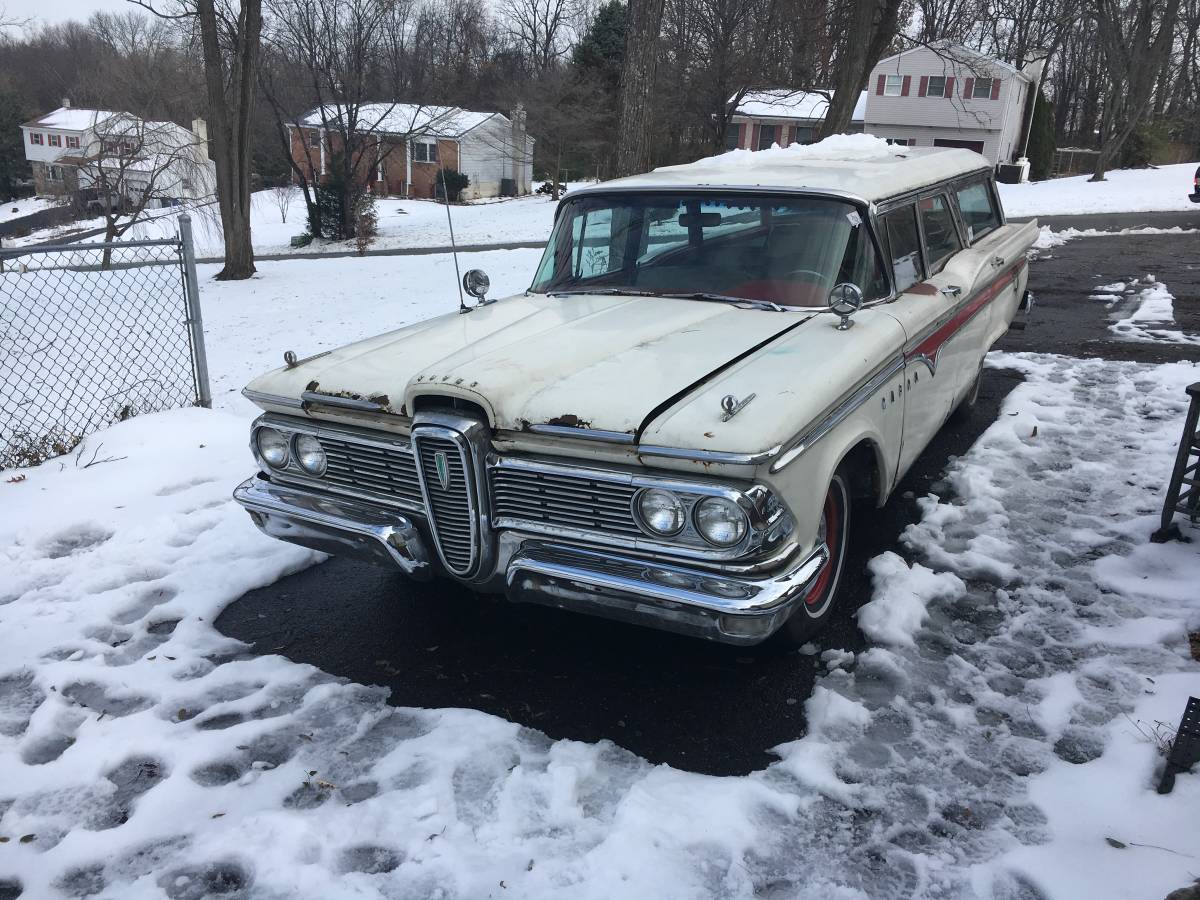 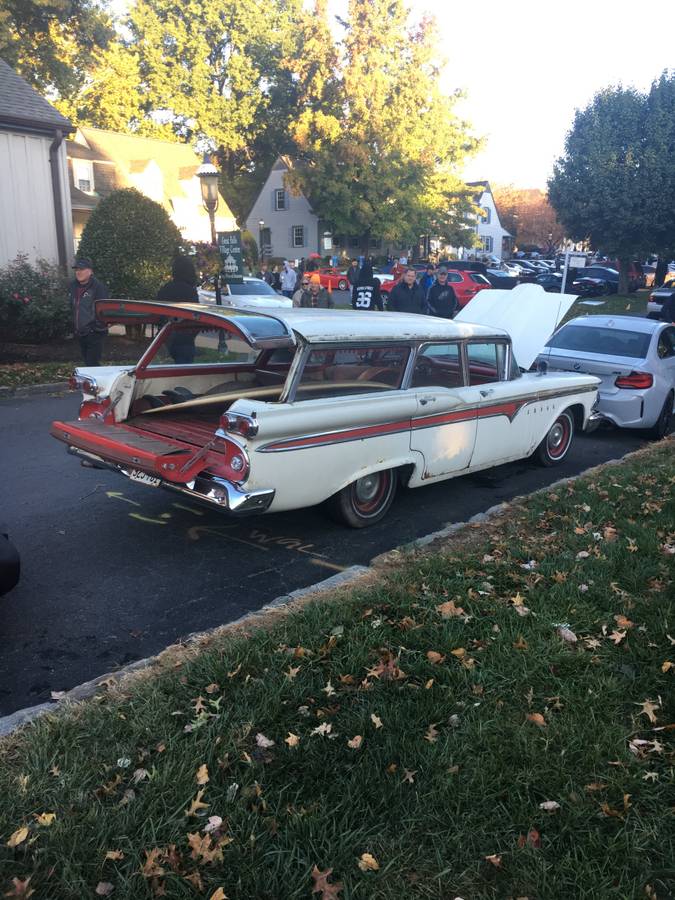 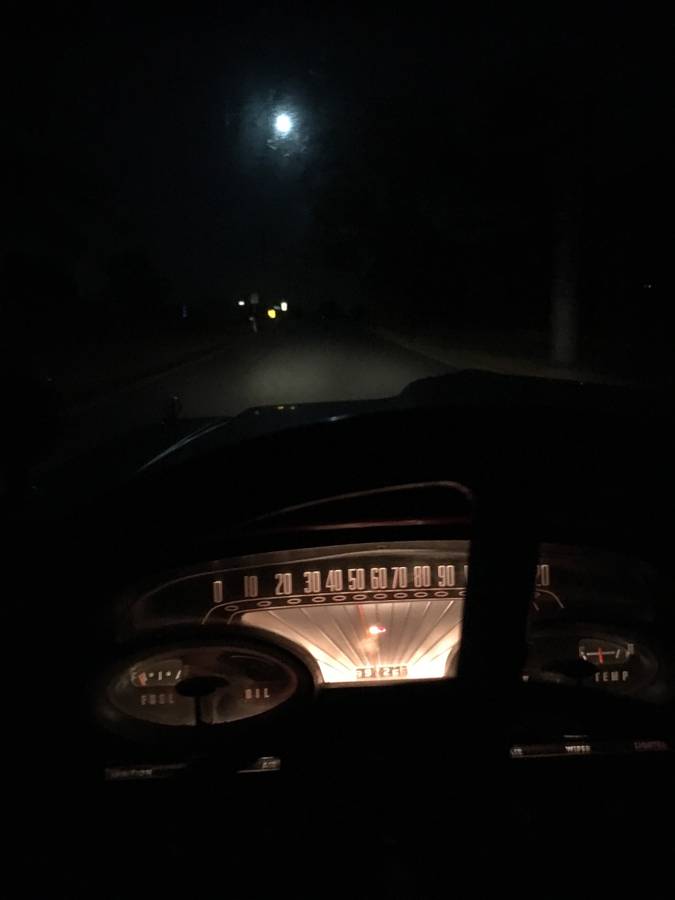 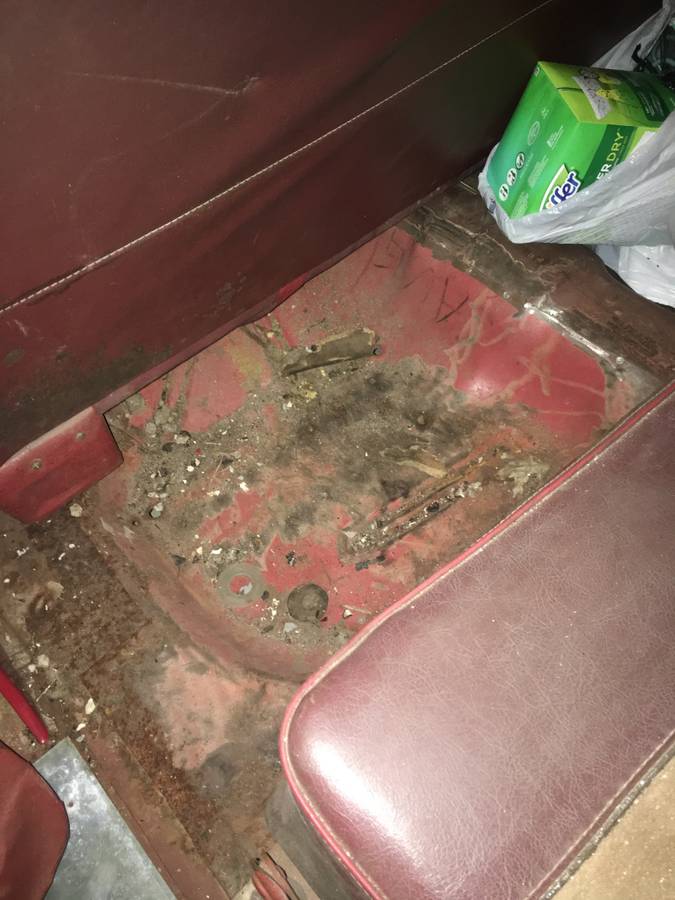 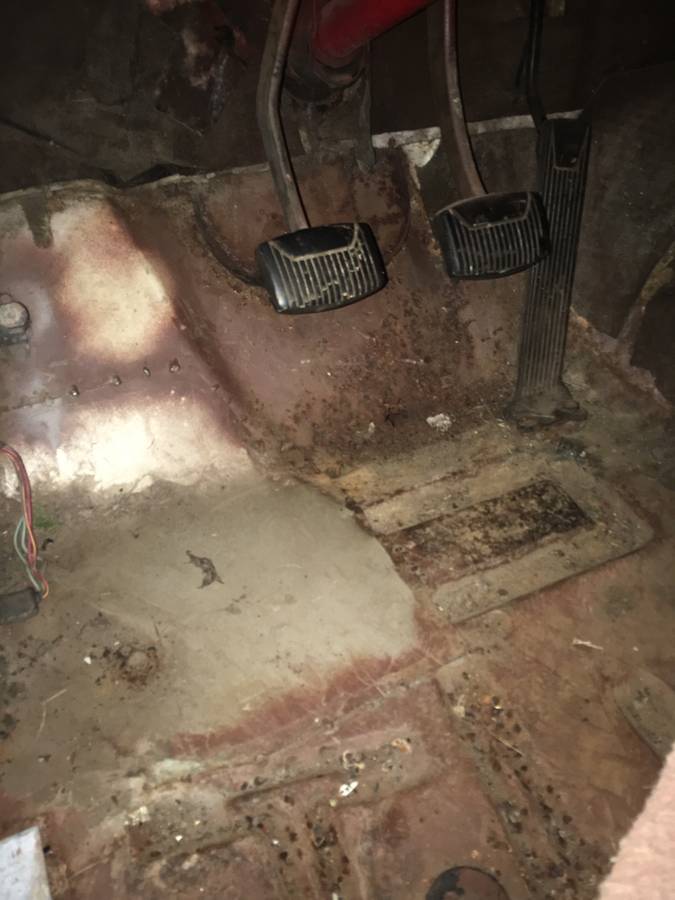 September 15, 2021 Update – We just confirmed the listing for this Edsel “Classifind” expired, so with no replacement found we’re assuming this ride “Sold?” While this one got away, please reach out either by email or call us directly if you’d like to be informed when we come across something similar.

There was a reason big full-size cars of the late 1950s offered an increasing number of V8 choices. It took a lot of power to move around all the steel it took to build these land yachts.  In the case of this 1959 Edsel Villager Station Wagon originally listed in September 2021 on Craigslist in Nokesville, Virginia (Washington, DC) the original owner must have been swayed by the commercial we feature below as this example came equipped with the standard 223 cubic inc inline-six mated to a three-speed manual transmission. A driveable project car currently listed for $8,000, comparing that price against the Hagerty Insurance Online Valuation Tool confirms the private seller has their Villager priced well below this guide’s #4 “Fair” (Daily Driver) estimate of $14,000.

Ford’s Edsel Division produced its Villager station wagon from 1958 to 1960. Like the two-door Roundup and premium Bermuda station wagons, the Villager was initially built on a 116 in wheelbase shared with Ford’s station wagons, and, throughout its lifespan, shared Ford’s wagons core body stampings. The Villager and the Ranger were the only two model names that existed throughout Edsel’s three-year life span as an automobile marque.

The Villager represented the lower trim level available within the Edsel brand for station wagons but differed from the two-door Roundup by being offered in six and nine passenger styles. The Villager was available in a four-door configuration only.  In terms of interior and exterior trim, the Villager had parity with the Edsel Ranger’s interior and exterior appointments. Standard features included black rubber floor mats, ashtrays, cigar lighter, armrests, chromed rear-view mirror, and crank-operated rear windows. Like all other Edsel wagons, the Villager came with a two-piece tailgate. Seat belts were optional.

To differentiate the wagons offered by Edsel from their Ford counterparts, they were fitted with Edsel’s front fascia and grille assembly. The wagons also received unique boomerang-shaped taillights for 1958. The shape of these taillights posed a problem when used as turn indicators – the left-hand taillight appeared as an arrow pointing right and vice versa from a distance. For 1959, the Villager received round dual taillights set in “beltline” level chrome pods.

During its first year in production, Edsel sold more Villagers than Roundup and Bermuda station wagons combined. Despite overall declining Edsel sales in 1959, sales of the 1959 Villager (7,820 units) outpaced the combined three-model ranges of station wagon production in 1958 (6,470 units) by well over 1,000 vehicles.

The Wheels TV YouTube Channel features this 1959 Edsel Commercial that, well, simply would not fly in today’s politically correct society for several reasons:

While we can critique the poor pictures provided on several different accounts, we elected to feature this Edsel anyway as Villager wagons in any condition are a rare sighting these days. The poor pictures are offset by a very detailed description that level sets what you are getting yourself into with this project car.  Here’s the seller’s description:

“Considering cash sale or possible trades for my 1959 Edsel Villager. I’ve had the car for 3 years now, it runs and drives with everything working (headlights, turn signals, etc.) I’d say it’s a good running and driving project car.

The Good:
The motor was rebuilt sometime around a decade ago and has less than 50k miles on it since the rebuild. It’s a 223 six-cylinder with a column shift 3-speed manual transmission, which shifts well. The previous owner used it as a backup daily driver for his truck, and it was PA state inspected through 2018 when I bought it. Since I’ve purchased it, it’s always been stored in a garage. No odd noises or issues from the engine, trans, or rear end. It needs a new water pump, thermostat, and radiator, which I’ve purchased and will replace before/if I sell. As mentioned above, almost everything works. Turn signals, brake lights, headlights, interior lights. The radio is the original radio and it turns on and seems to work but mostly just picks up static because I don’t have an antenna for it and it’s an AM-only radio (so can’t confirm it works perfectly). Also, came with a bunch of additional parts including multiple chrome bumpers, rear windows and door glass, extra hood and dash, rocker panels, etc…

What it needs:
As mentioned above, it’s definitely a project. There’s some rust (as it’s spent most of its life uncovered in PA). But it’s mostly lower rockers, quarters, and small pieces here and there. Floor patch pans have been installed so the floors are in ok shape but would definitely need work if a full restoration is desired. The interior needs reupholstering (I also have seat material and seats/door skins). Other than that it’s a mostly solid car.

I really love this car and would hate to see it go but I’ve already got 3 other projects currently and haven’t been able to give this the time it deserves. I wouldn’t usually post, but finding an Edsel on CL within 200 miles of DC is incredibly rare, let alone a villager wagon. They only made 5,678 of these, and I’d hazard a guess there is less than 1,500 around today. In the last year, I’ve seen two fully restored examples go for $35k – $45k for better-optioned villager wagons, so it seems there might be more interest in Edsels? Anyways, I’m not in any hurry or rush to sell, I would consider trades for cars (1980 or older) or motorcycles, or for Ford engines (for my other project). I’d possibly be down for cash+trade or straight-up trade, or straight-up cash. I’m pretty open-minded, so just let me know what ya got. I’ve seen some nonrunning Edsel villager projects advertised recently at $10k (rust-free western examples), so I think $8,000 seems like a fair starting point, but let me know your best offer. I need to take some better pics, so apologies for the lack of detailed pics, but I have videos of it running and driving that I can send. And obviously, the car can be seen if I am interested in your offer.”

Restore or Restomod: what would you do with this Edsel Villager project?  Comment below and let us know!