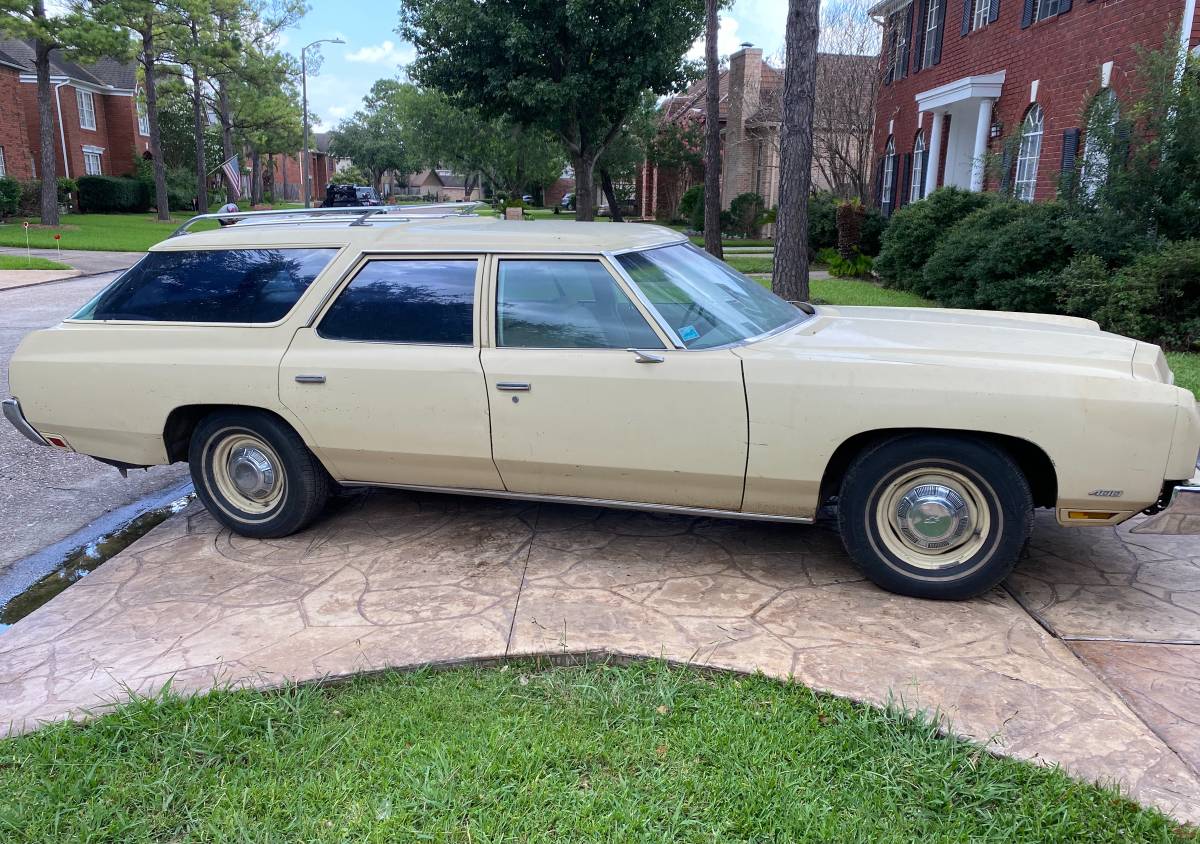 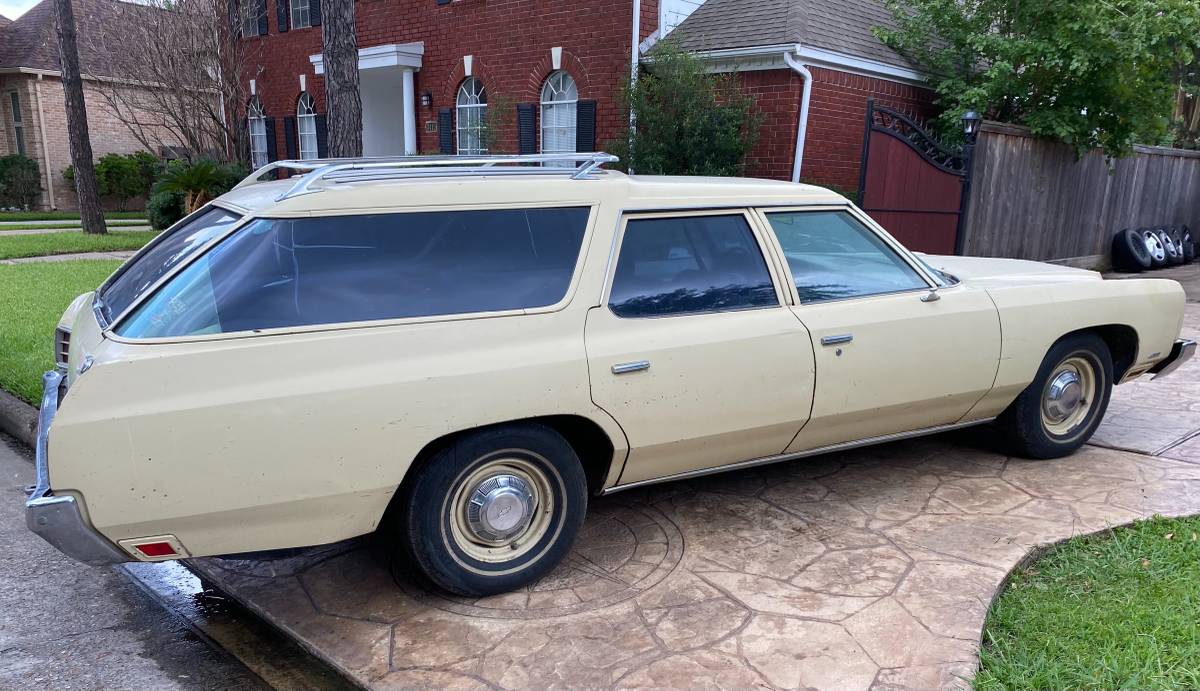 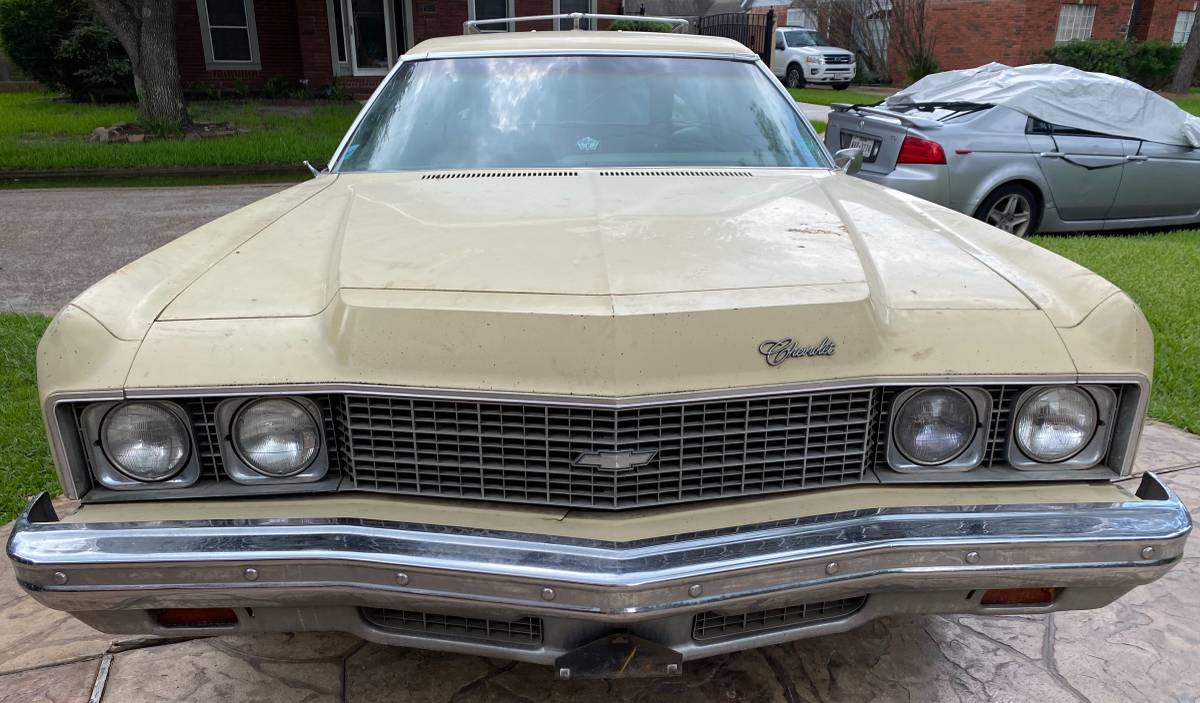 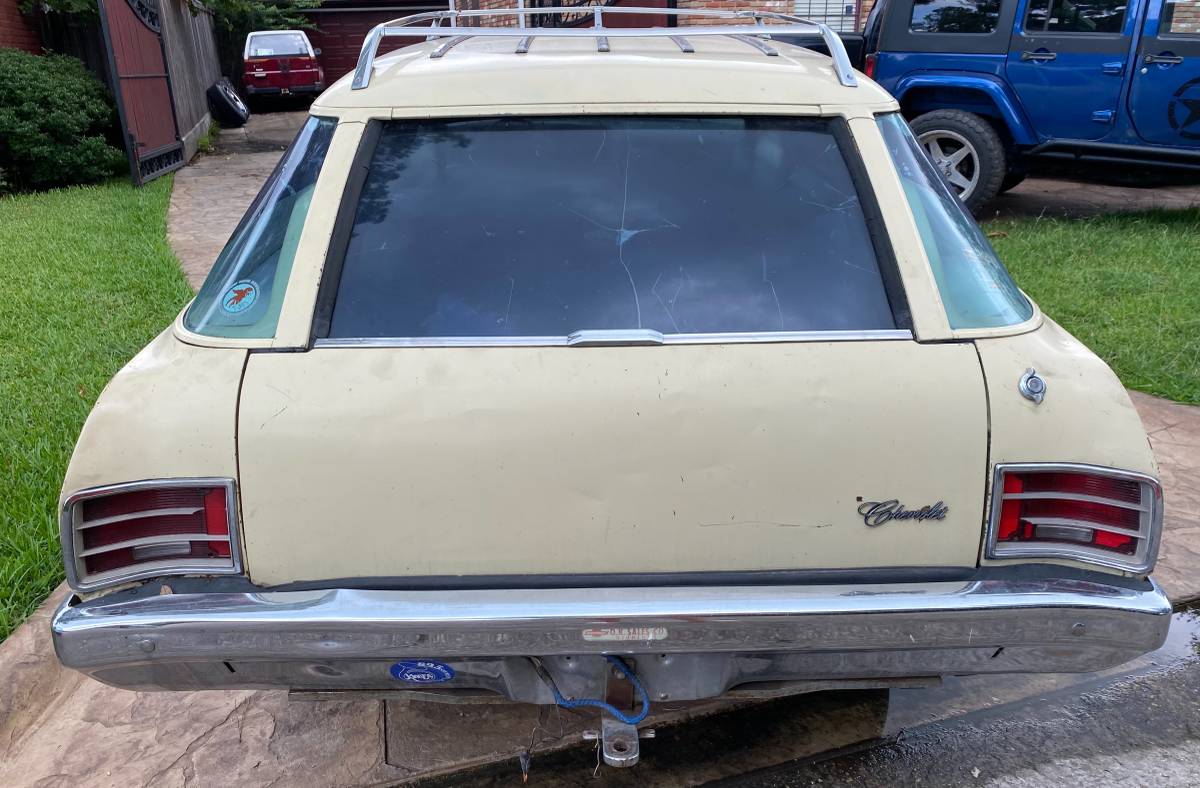 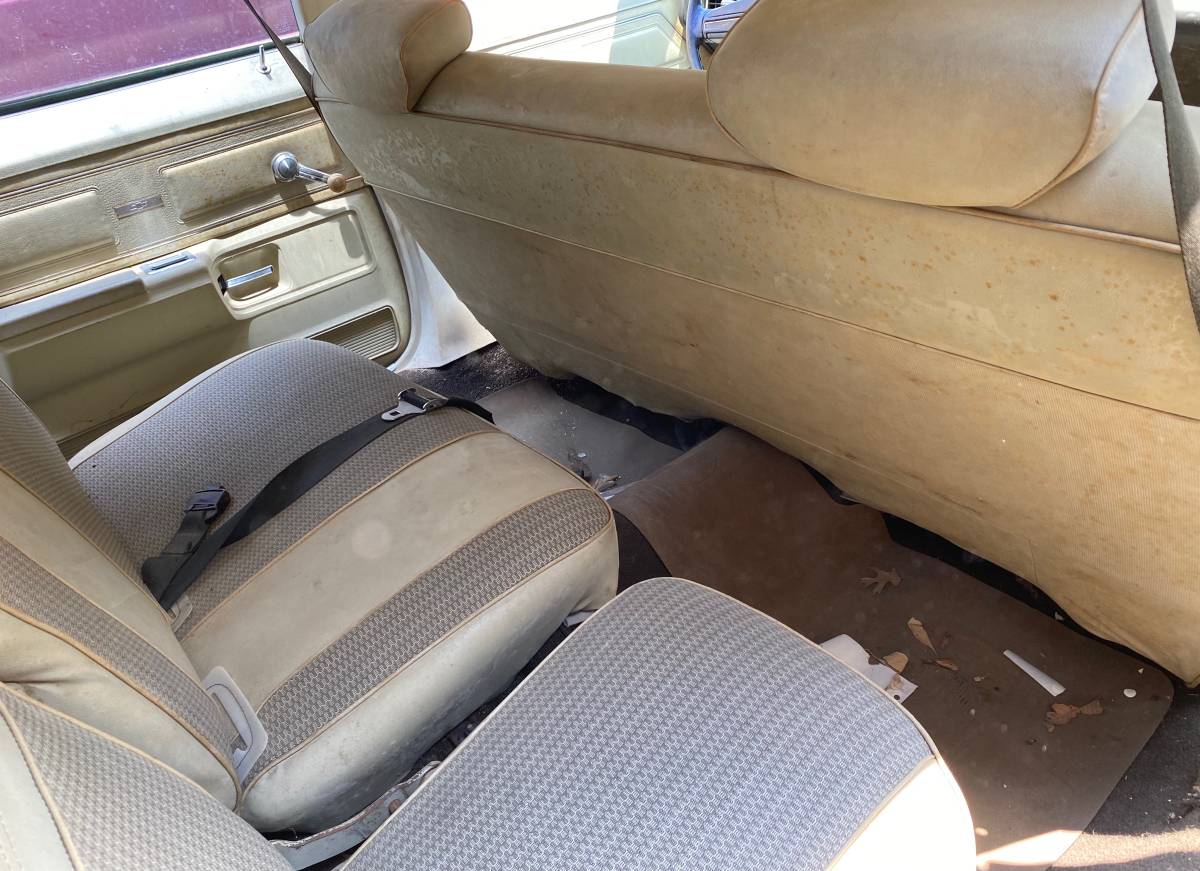 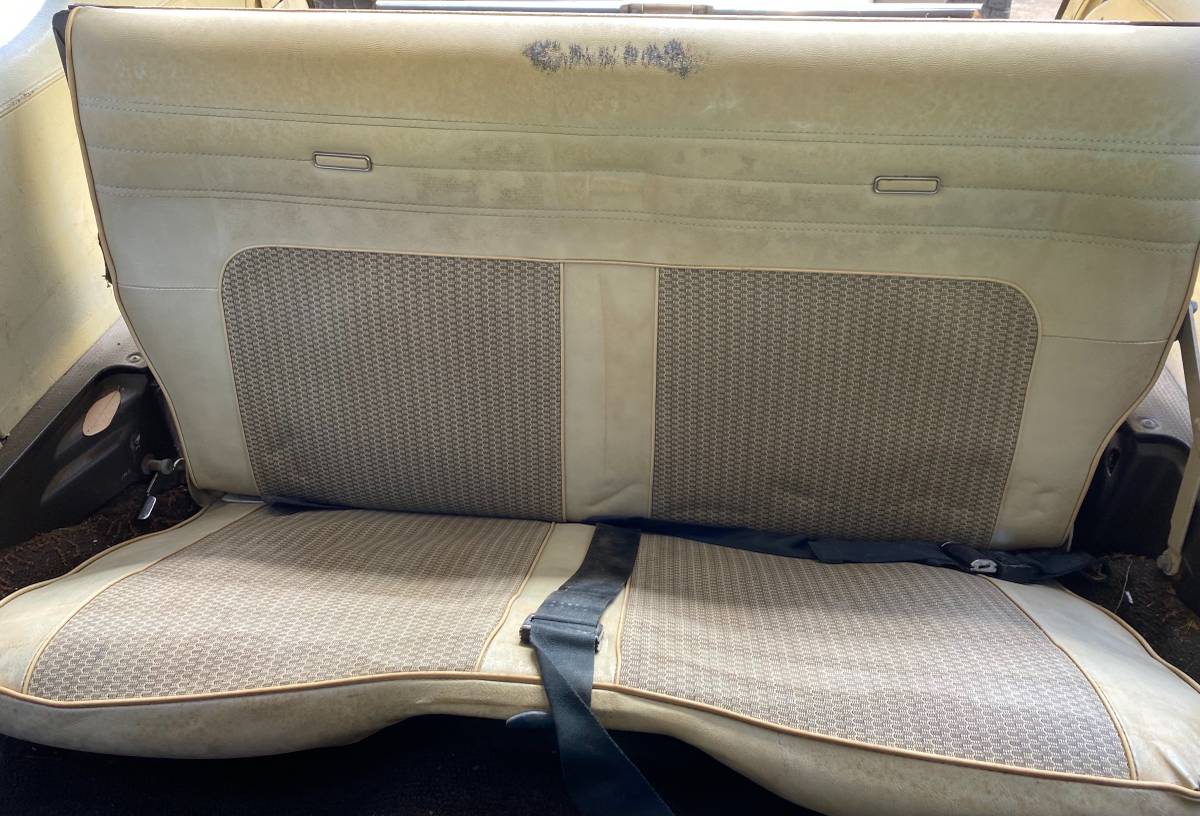 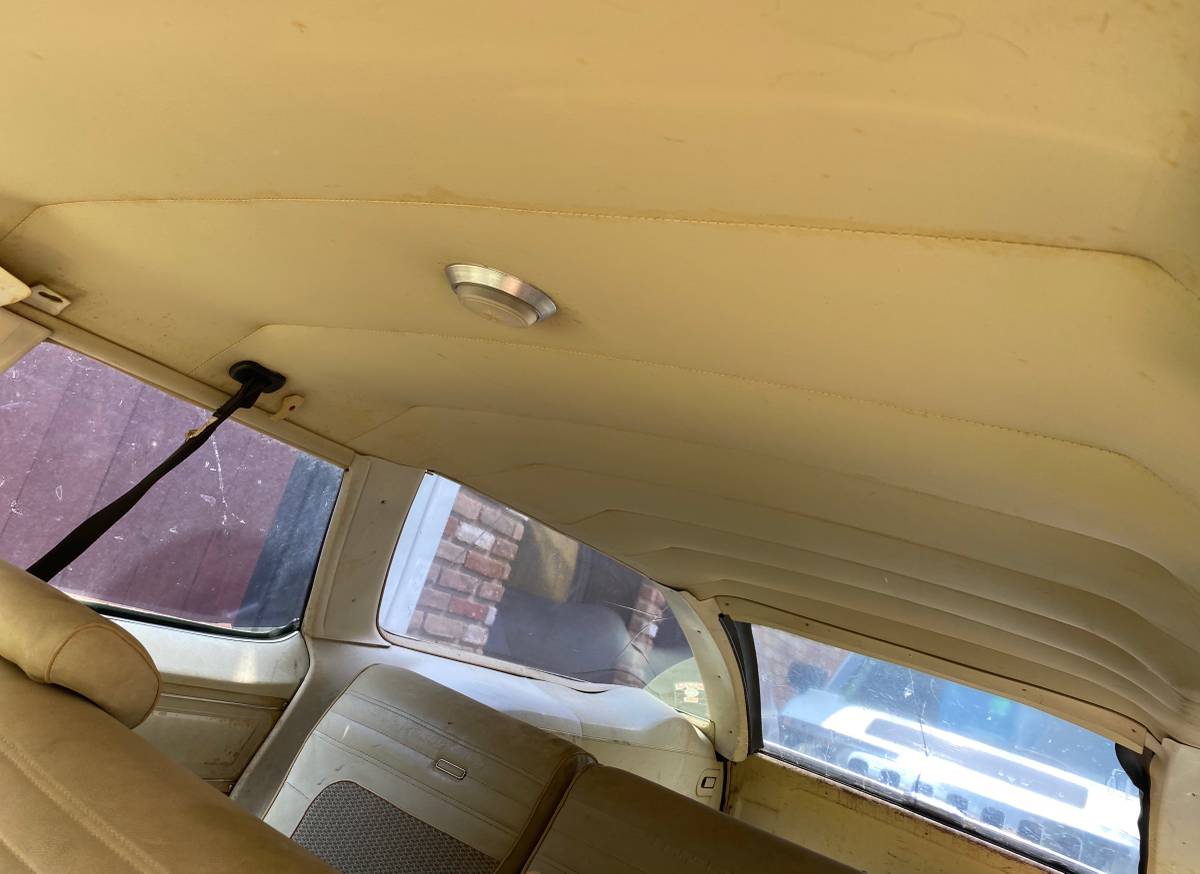 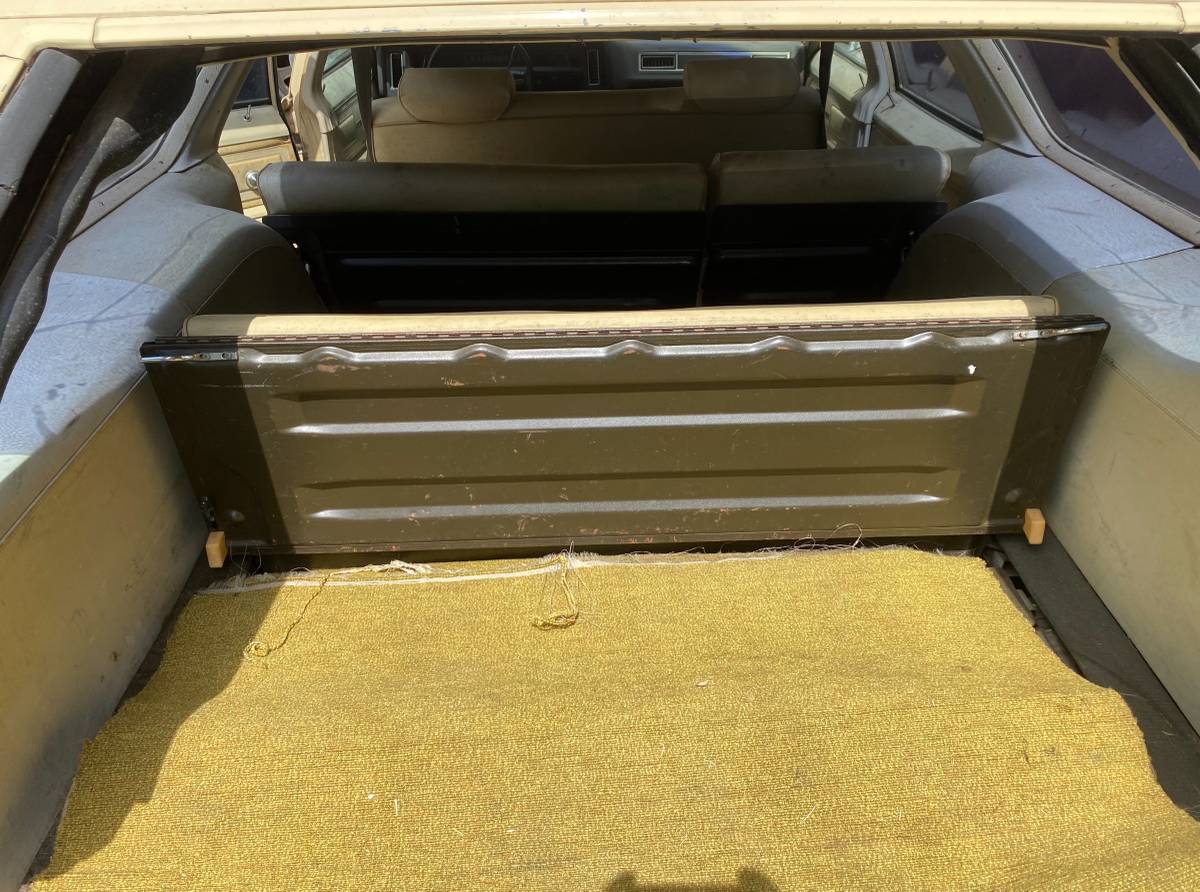 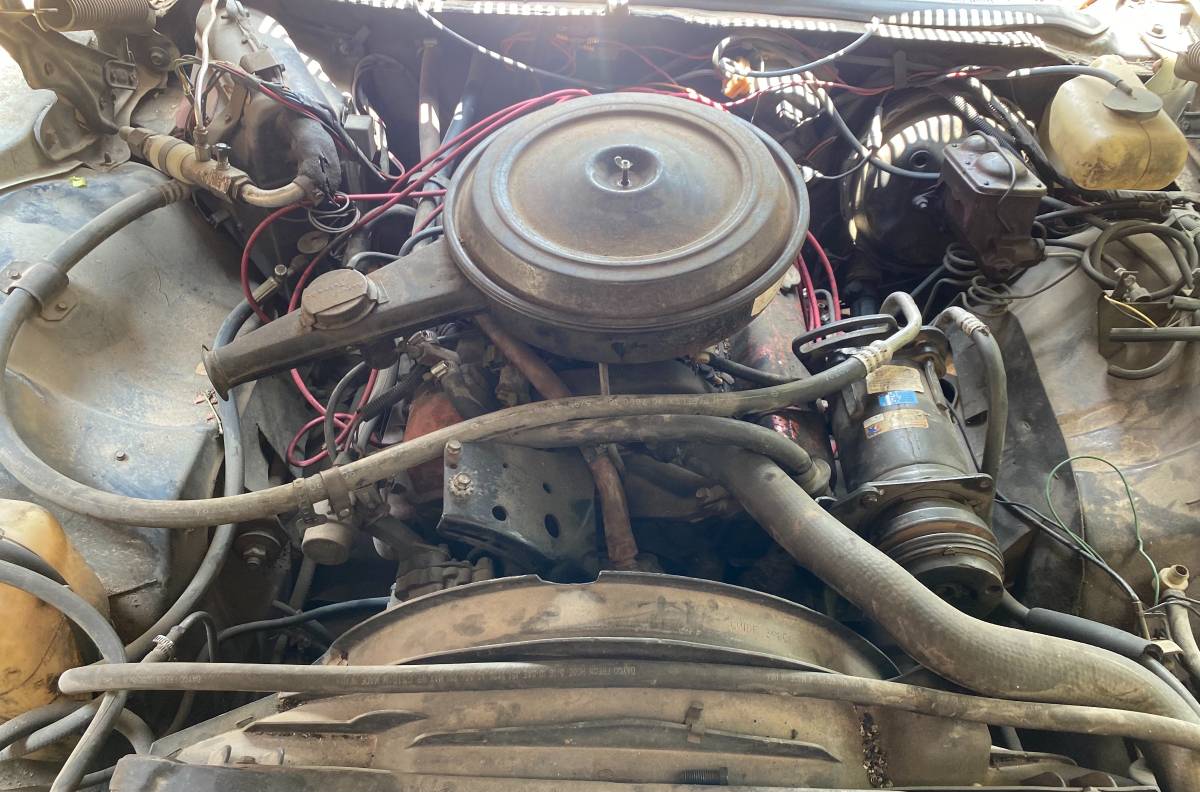 November 16, 2021 Update – We confirmed the seller of this “Classifind” deleted their listing, so we’re now able to call this one “SOLD!” While this one got away, please reach out either by email or call us directly if you’d like to be informed when we come across something similar.

October 17, 2021 Update – Turns out our hunch was correct as the seller of this classic Chevy Clamshel wagon just posted a fresh listing for their Bel Air.  While the description and several pictures have changed, the price remains firm at $13,750.

October 12, 2021 Update – While this “Classifind” expired recently, given the seller’s past history we suspect may not actually be sold yet.  For now, we’re labeling this ride “Sold?” until we come across a fresh listing.

September 27, 2021 Update – The seller just updated their listing indicating in addition to new rubber and aftermarket wheels, the car is about to go into the paint show for a new base coat/clear coat application.  Consequently, they increased the asking price to $13,750. Candidly, reading this development was a disappointment as less than one large for a paint job does not get you a very high-quality job.  We wished they would have just left the car alone.

September 11, 2021 Update – When the seller deleted their original listing after only one week, we assumed it was a quick sale. However, they were continuing to do more work on the car and/or might have been dealing with the aftermath of Hurricane Ida as this car is located in the Houston area.  In any event, the car is once again listed for a $12,500 asking price.

August 25, 2021 Update – we confirmed the seller of this Chevy Clamshell “Classifind” deleted their listing just one week after posting it, so we’re assuming this Clamshell wagon is now “SOLD!” unless we come across a fresh listing.

Finally. Since starting our Wagon Wednesday theme over two years ago, we longed for the day we could feature a 1971-1976 vintage GM “B” Body “Clamshell” station wagon.  Once a staple on American highways, spotting one in driveable condition is a rare sight today.  The complexity of the disappearing tailgate and window assembly combined with a propensity for the former’s support structure to rust out are the primary reasons you just don’t see them much anymore.

Fortunately, this driver-quality 1973 Chevrolet Townsman Nine Passenger example originally listed in September 2021 on the west side of Houston, Texas has withstood the test of time. Currently offered at $13,750 currently, comparing that price against the  Collector Car Market Review Online Tool reveals the seller’s ask falls between this guide’s #2 “Very Good” estimate of $11,675 and its #1 “Excellent” appraisal of $18,500 before factoring in a five percent premium for the 400 cubic inch small block V8 this Clam Shell is equipped with.

From the 1950s through the 1970s, Chevrolet had a storied history of retiring and relaunching brand names used for the GM Division’s station wagons. For example, after retiring the “Townsman” brand name at the end of the 1957 model year, Chevrolet revived for 1969 with the new model based on the rear-wheel-drive GM “B” platform. It was offered in both six- and nine-passenger versions only equipped with V8s ranging from 350 to 454 cubic inches from 1970 forward.  Chevrolet positioned the Townsman above the Brookwood and below the Kingswood, which were Biscayne, Impala, and Caprice-based wagons respectively.

The 1971 and 1972 wagons featured a ‘clamshell’ design marketed as the Glide-away tailgate, also called a “disappearing” tailgate because when open, the tailgate was completely out of view. On the clamshell design, the rear power-operated glass slid up into the roof and the lower tailgate (with either manual or optional power operation), lowered completely below the load floor. The manual lower tailgate was counterbalanced by a torque rod similar to the torque rods used in holding a trunk lid open, requiring a 35-pound push to fully lower the gate. Raising the manual gate required a five-pound pull via a handhold integral to the top edge of the retractable gate. The power operation of both upper glass and lower tailgate became standard equipment in later model years. Wagons with the design featured an optional third row of forward-facing seats accessed by the rear side doors and a folding second-row seat—and could accommodate a 4′ × 8′ sheet of plywood with rear seats folded. The clamshell design required no increased footprint or operational area to open, allowing a user to stand at the cargo opening without the impediment of a door—for example, in a closed garage. That year wheelbase also increased from 119 to 125 inches, the longest of any Chevrolet regular passenger car ever produced. Most options, aside from power windows and six-way front seat (with driver’s control), were available on Townsman (and its less-expensive Brookwood counterpart) wagon models.

This demonstration of a manual clamshell operation on a similar Buick Estate from the period provides a great view of the Glide-Away system in action:

Based upon the seller’s description and one of the pictures provided, this Townsman appears to be a barn find they are in the process of getting back to being road-ready for sale. If you’ve been looking for a solid Chevrolet Clamshell wagon for your next build, this appears to be a very nice candidate.

“If you’re reading my add on/after 8/8/21 feel free to check back on/after 9/1/21 and it should be up and running/driving perfectly with COLD AC and it will have a new front windshield too.

Restore or drive as-is: what would you do with this Clamshell wagon?  Comment below and let us know!