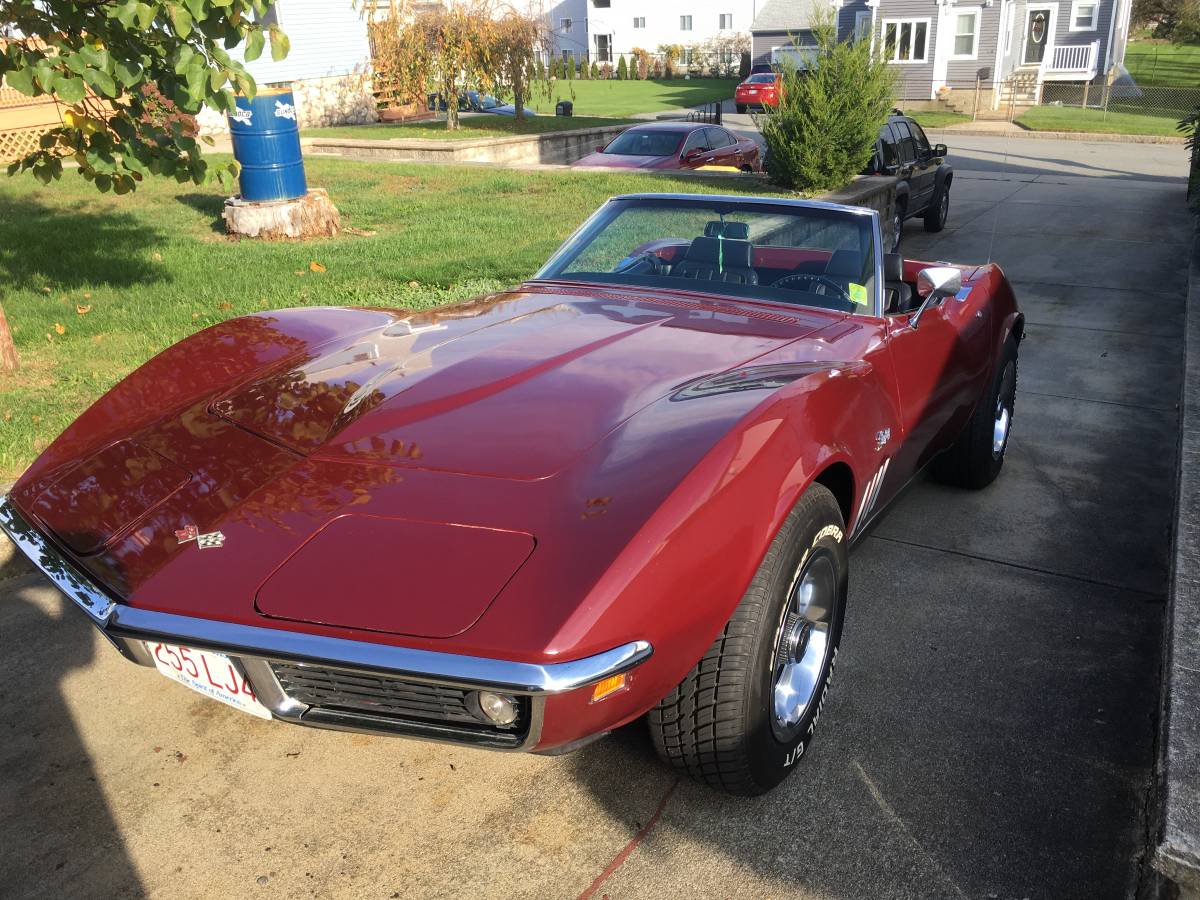 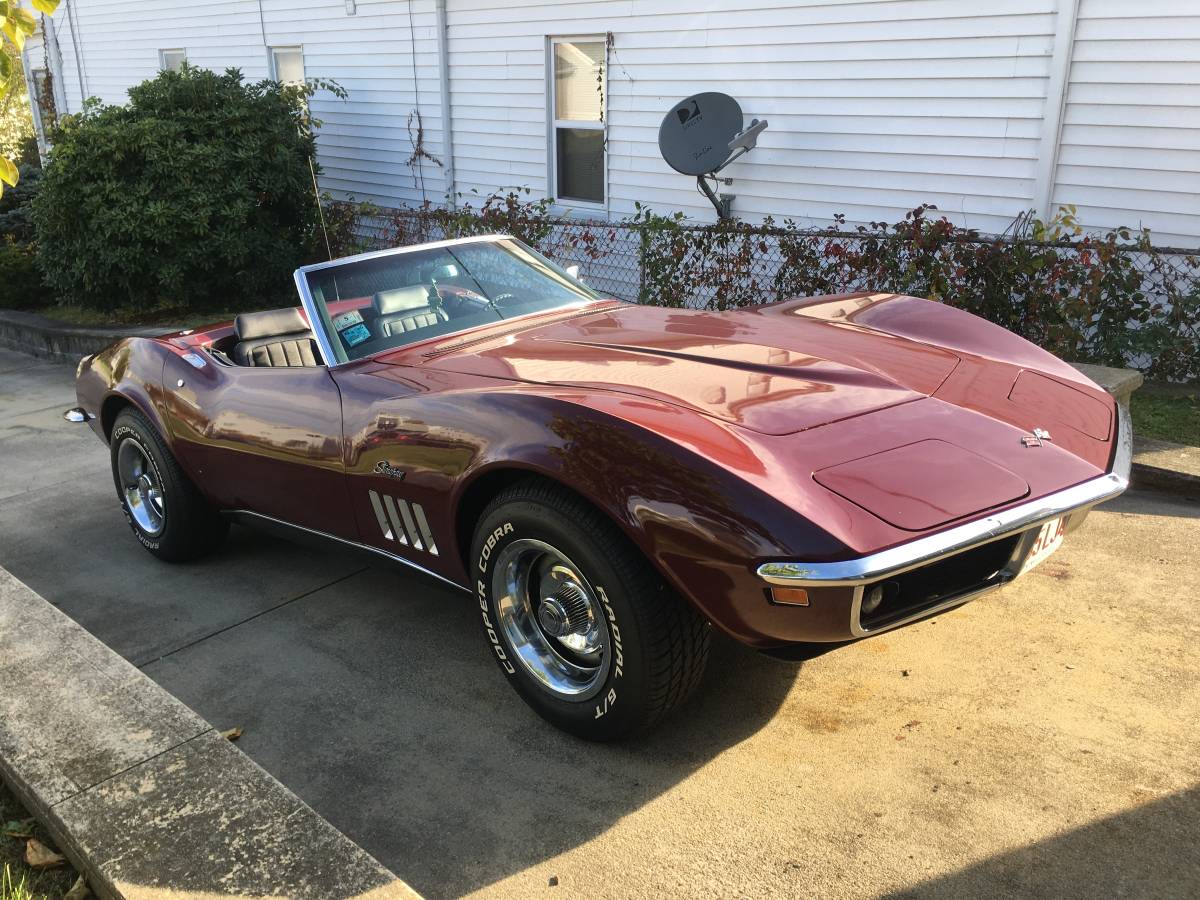 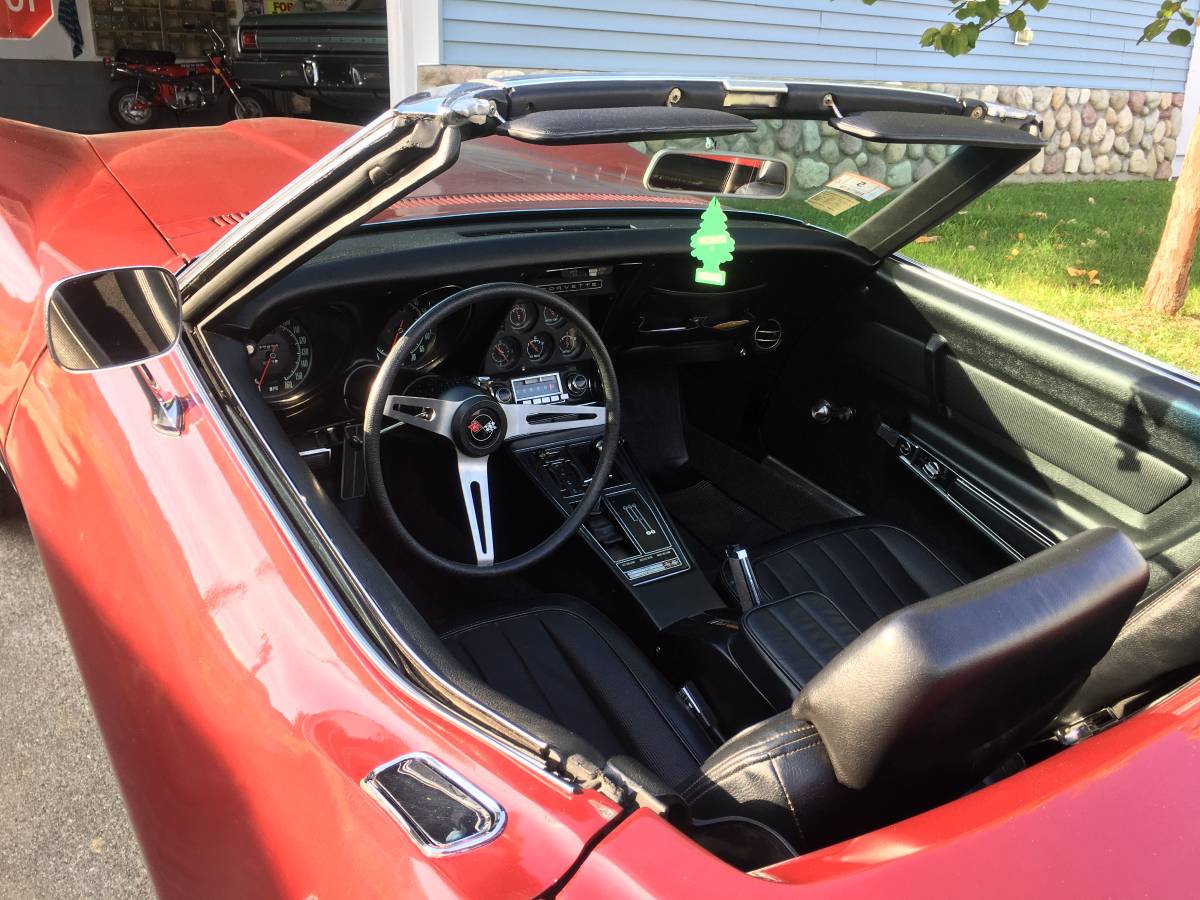 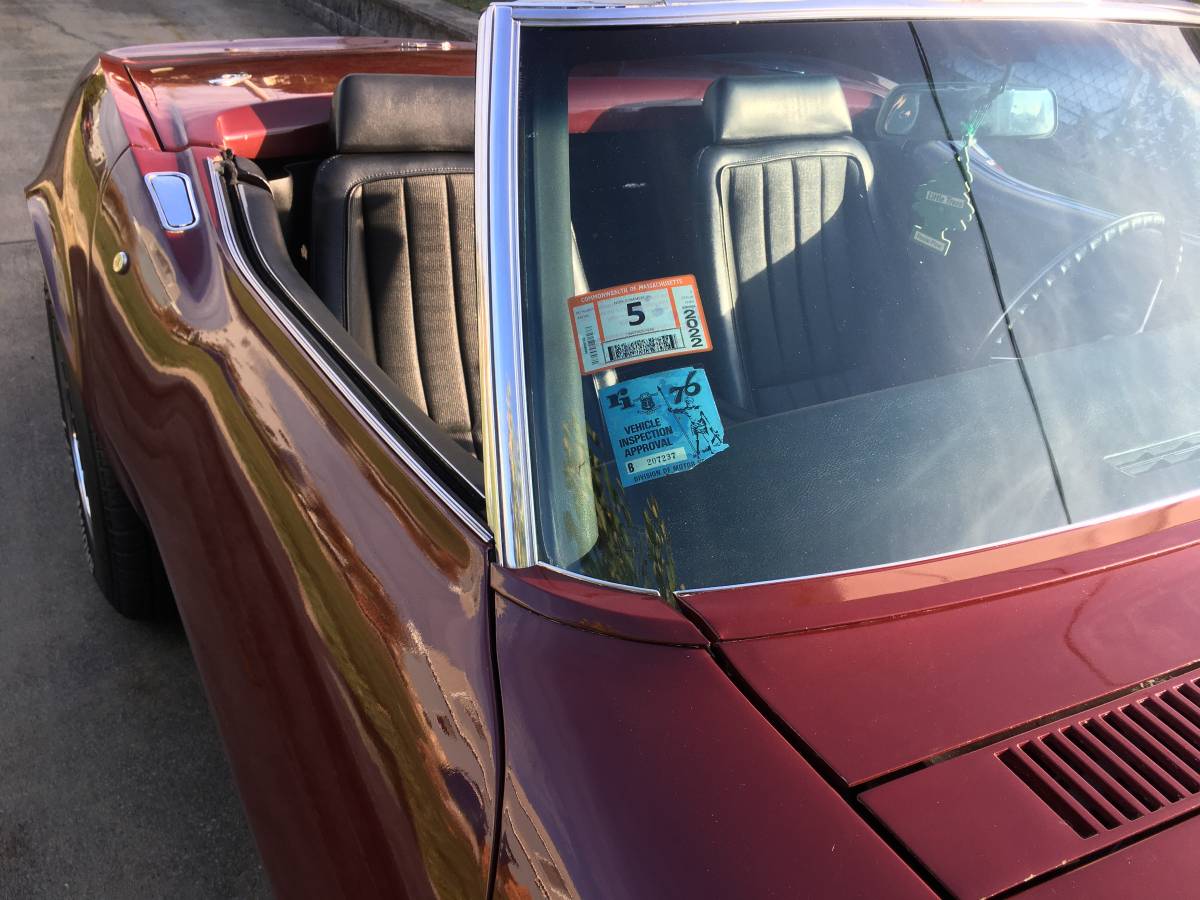 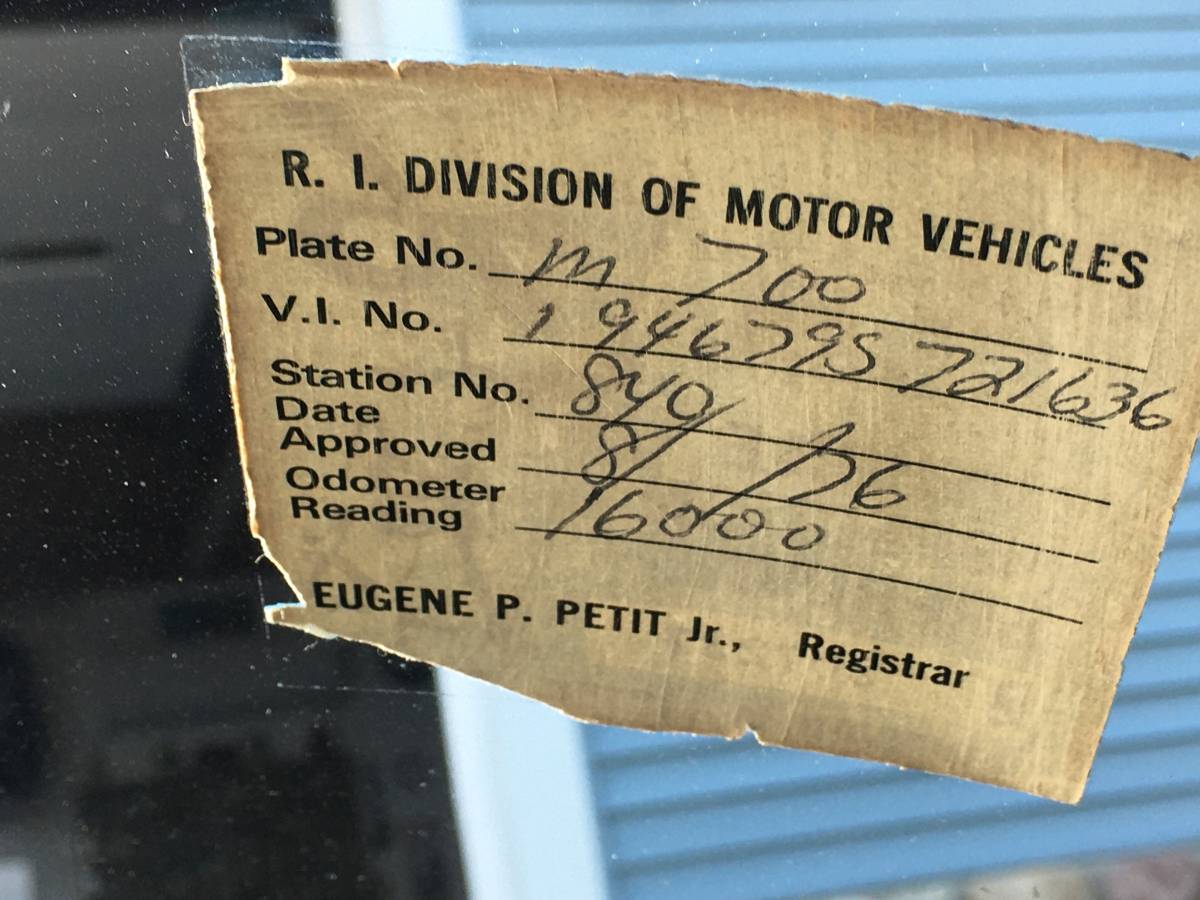 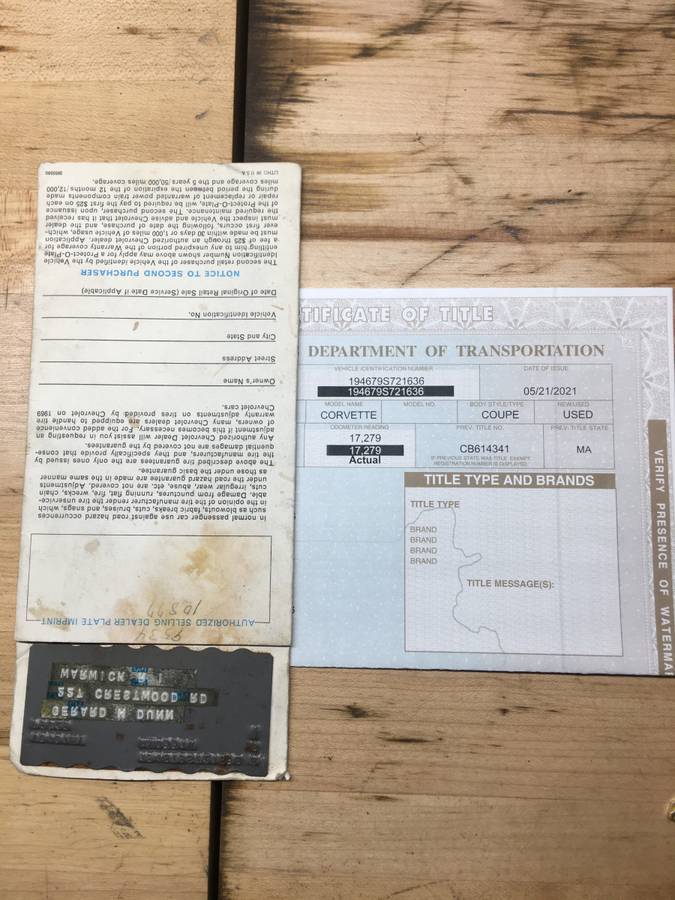 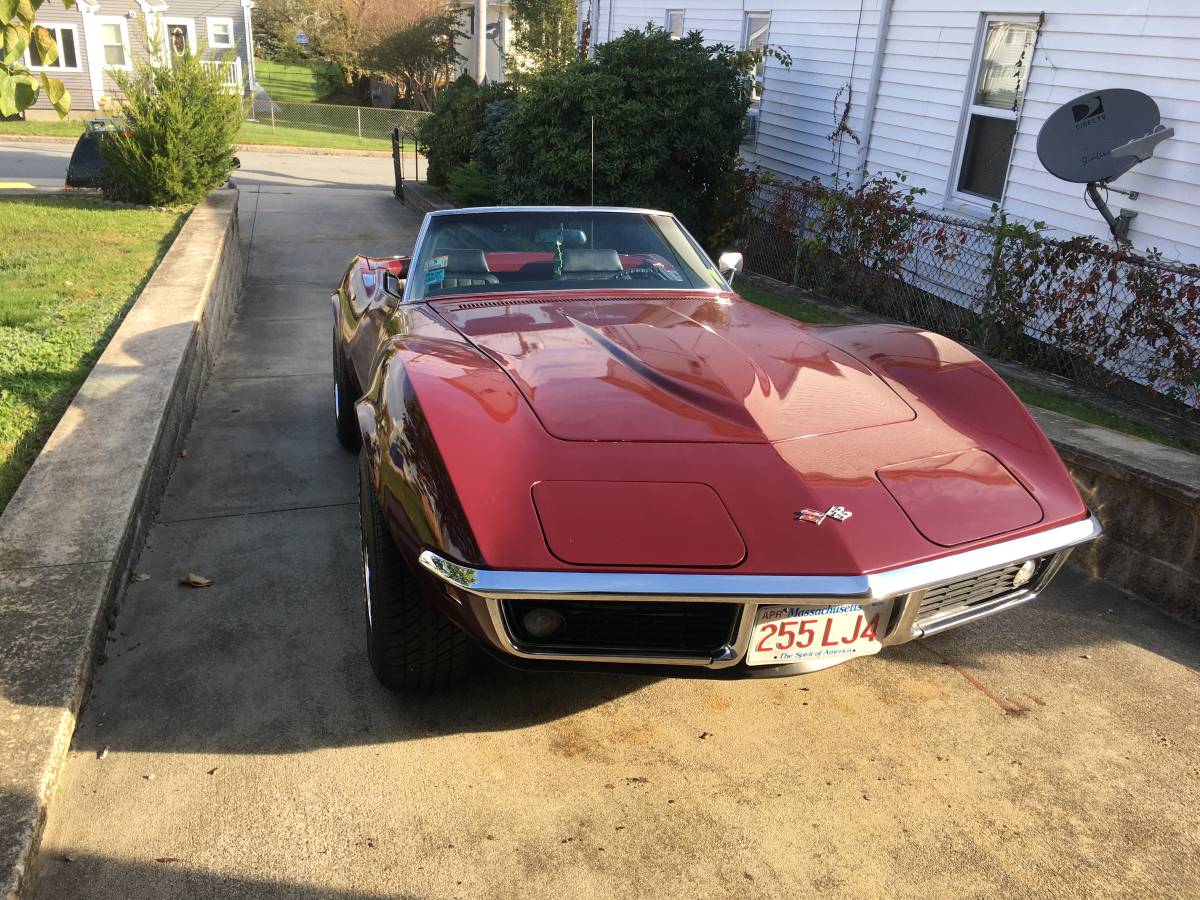 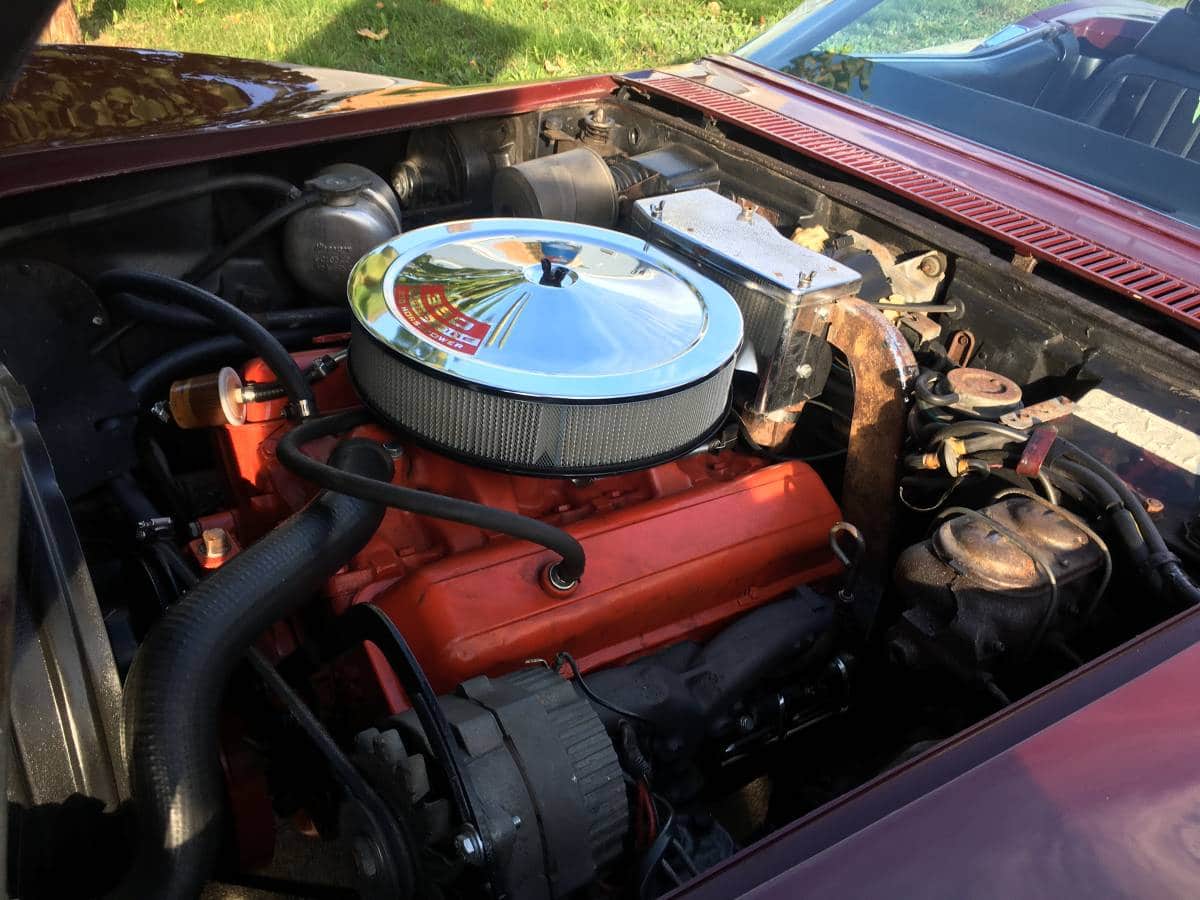 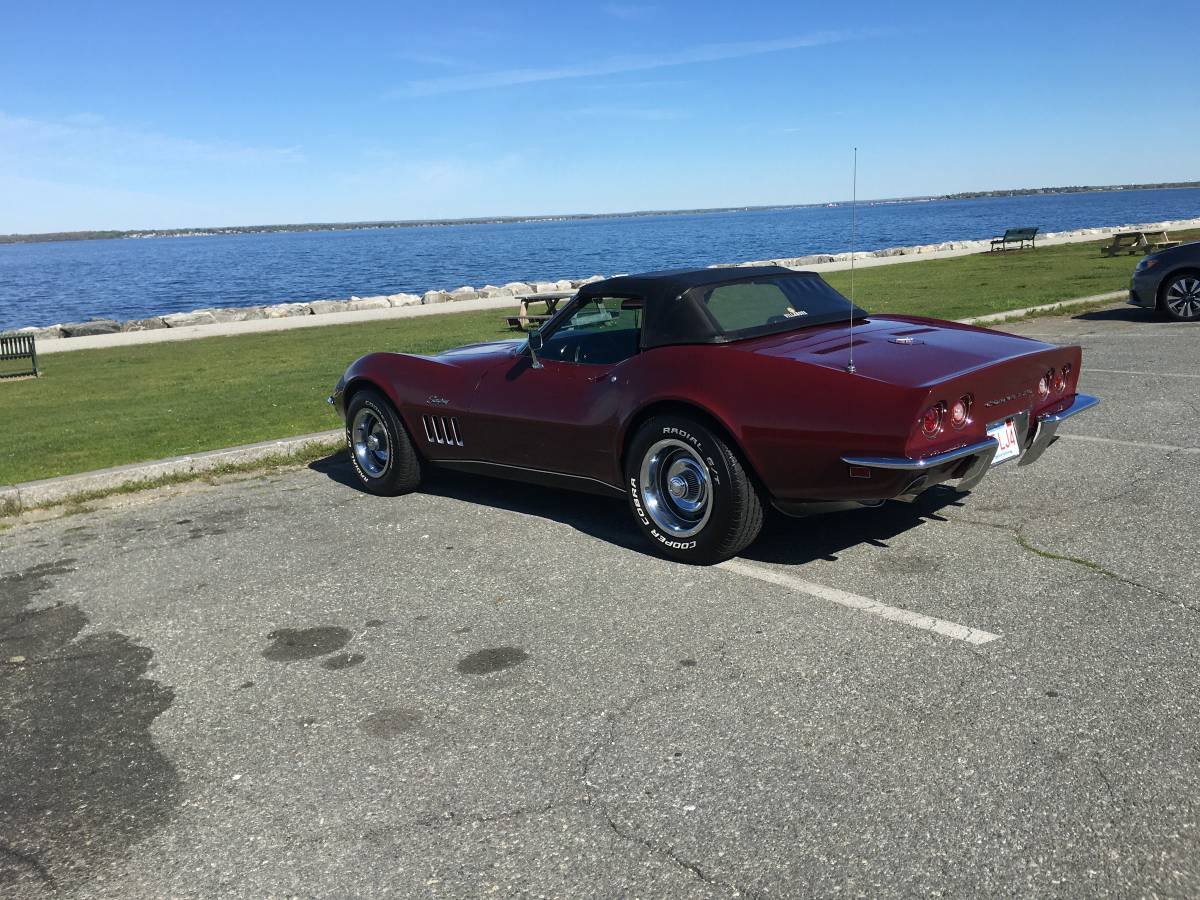 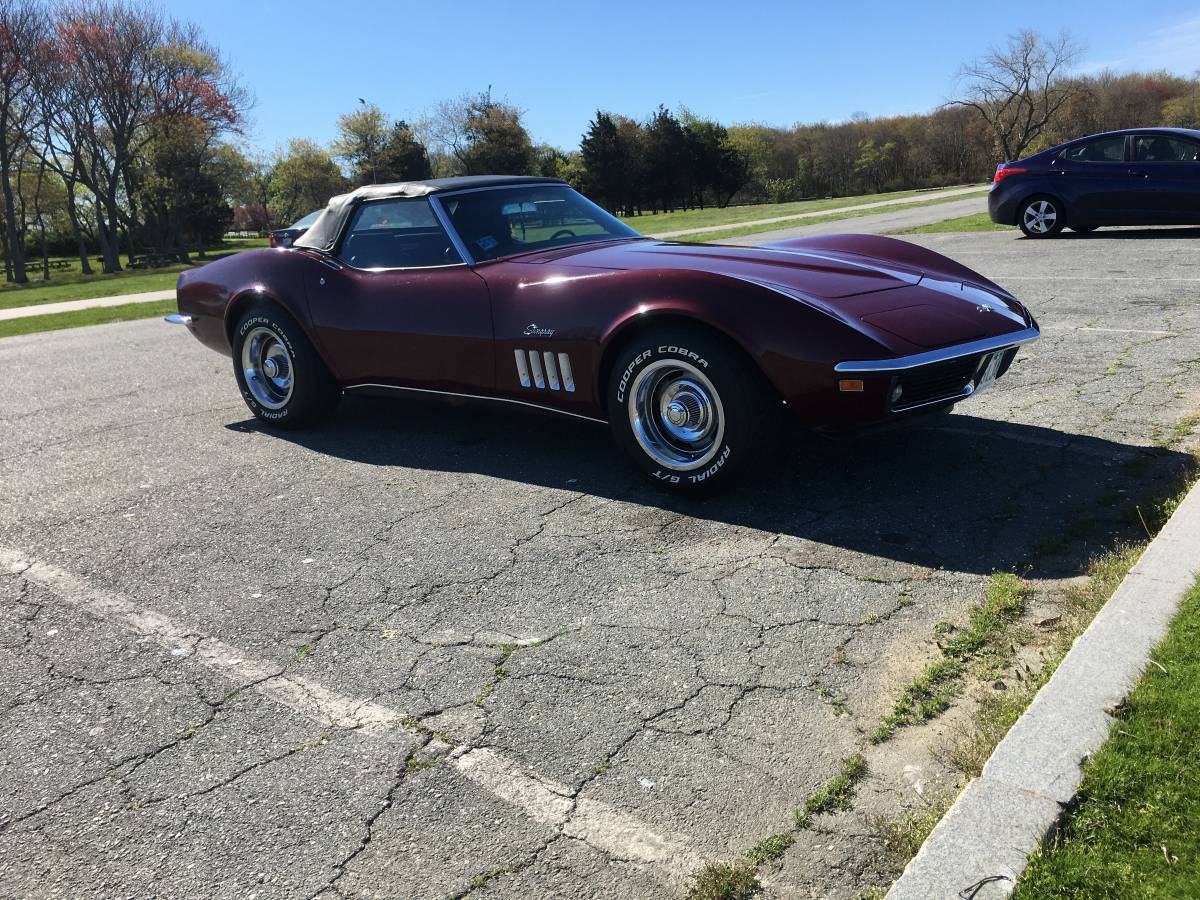 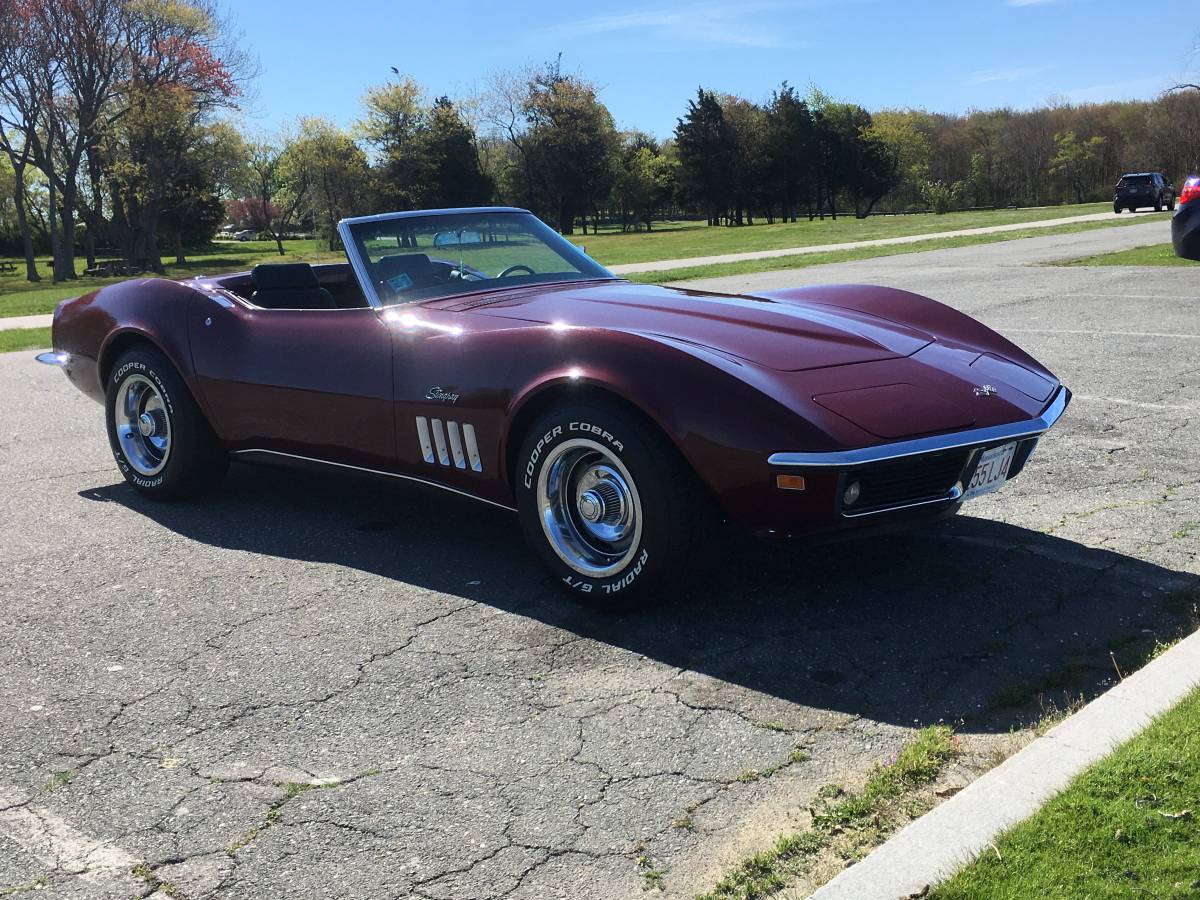 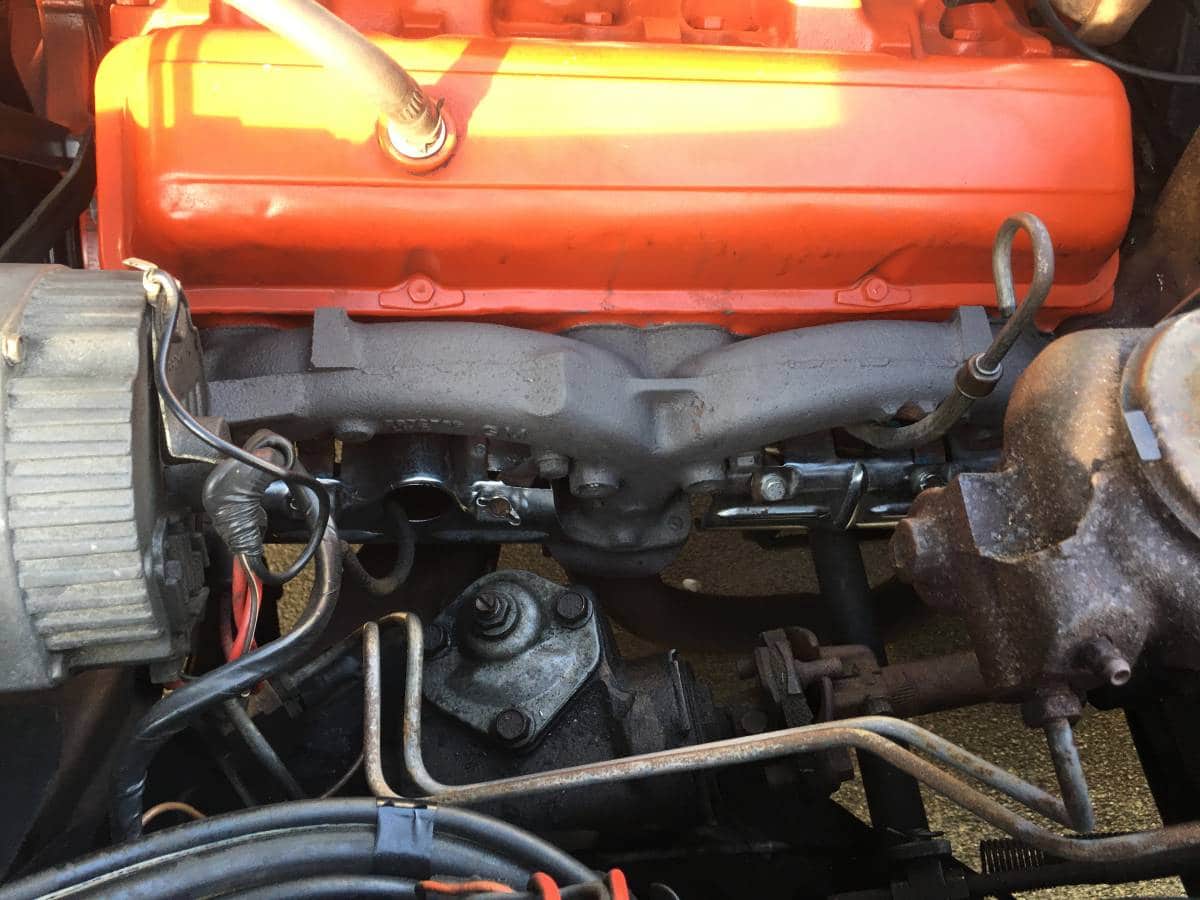 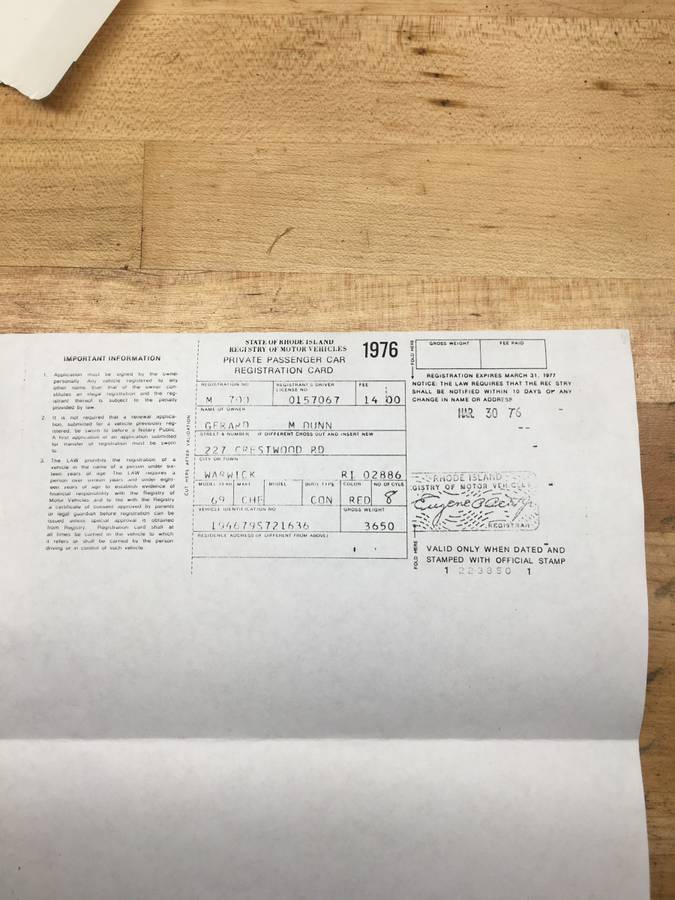 November 2, 2021 Update – We just noticed the private seller just lowered their asking price by a significant six thousand dollars from the original ask of $38,500 to $32,500.

Cars are original only once, so if you have your heart set on buying an early vintage (1968-1973) C3, this Burgundy over black 1969 Chevrolet Corvette Convertible is originally listed in October 2021 on Craigslist in Fall River, Massachusetts (Boston) might rise to the top of your shortlist.  Reported to be a documented 350 cubic inch, 4-speed example with under 17K original miles and featuring its original paint, the first thing that might be a red flag to us is the “350/370 Horsepower” decal affixed to the chrome air cleaner.  That combination hints at the power available from an LT1 version of the 350 cubic inch small block Chevy V8.  While the LT1 engine was technically listed as an option for 1969, our understanding is that it did not actually make it into production until the 1970 model year. Consequently, the seller will need to provide much more documentation to confirm whether this car features its original motor. With such low mileage, we’re hopeful the gas tank sticker remains in decent enough shape to be able to confirm what the motor should be.

That nuance aside, the private seller is now asking $32,500 (their original ask was $38,500) or the best offer. Comparing that price against the Hagerty Insurance Online Valuation Tool confirms the private seller has their Corvette priced just above this guide’s #3 “Good” estimate of $38,000 for the 350 horsepower L46 version.  Interestingly, the  Collector Car Market Review Online Tool reveals the seller’s ask falls between this guide’s #2 “Very Good” estimate of $28,450 and its #1 “Excellent” appraisal of $39,100 before making adjustments for power train and optional equipment.

1969 was the second model year for Chevrolet’s C3 Corvette. That year, the base engine’s displacement increased from 327 cubic inches to 350 cubic inches while all other engines and transmission choices remained unchanged. All Corvettes now featured 8-inch-wide steel wheels. One-word “Stingray” script nameplates now appeared on front fenders that would last through 1976.  On the inside, revised door panels provided additional shoulder room in the C3’s tighter cabin, headrests became standard, and steering wheel diameter was reduced from 16 to 15 inches to permit easier entry and exit.

Given the nuance of the air cleaner label and the low mileage reported, we strongly encourage you to have someone knowledgeable about Corvettes inspect the car with you in person to decode the VIN and trim tag as well as inspect the engine and transmission numbers. Just because a low has extremely low mileage does not mean it is an all-original car, so do your homework and then make an offer accordingly.

Here’s the seller’s description (Apologies for their use of all capital letters):

Show or go: what would you do with this 1969 Corvette Convertible?  Comment below and let us know!