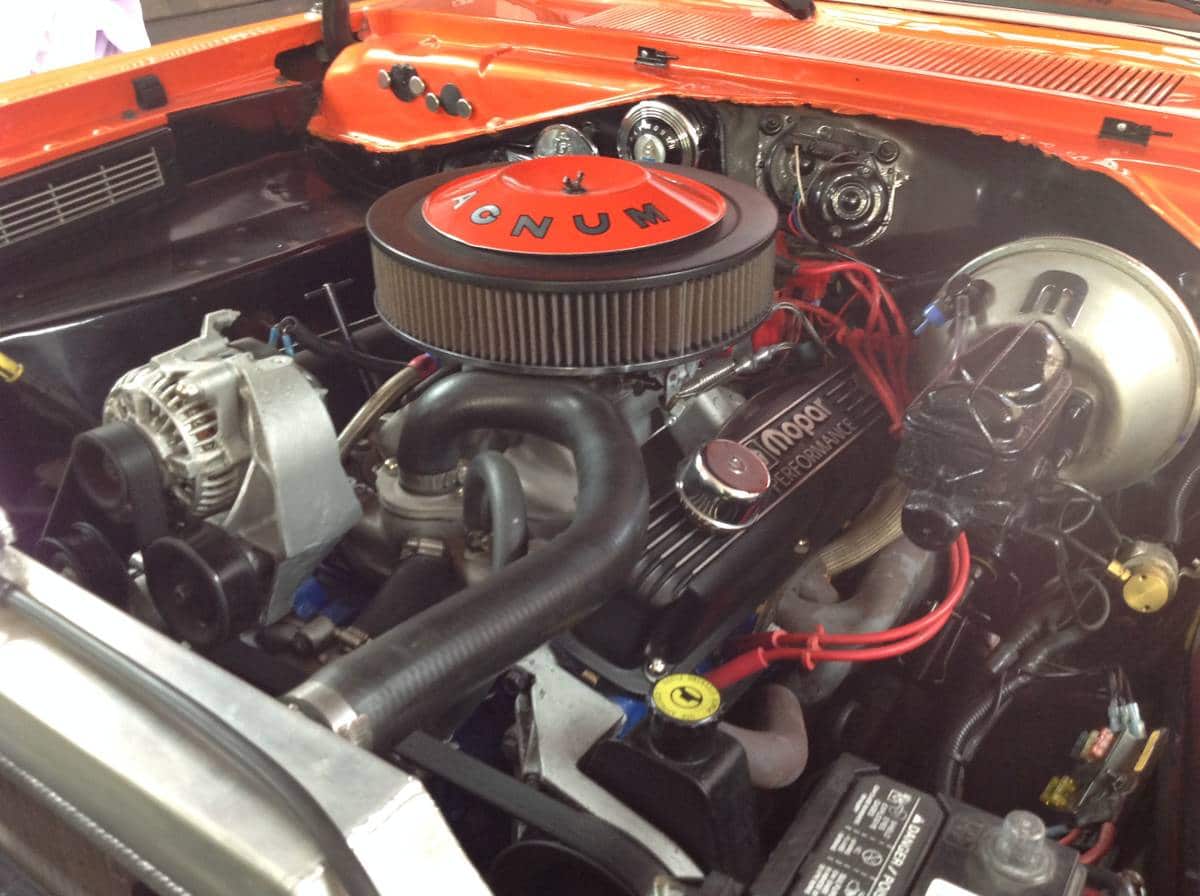 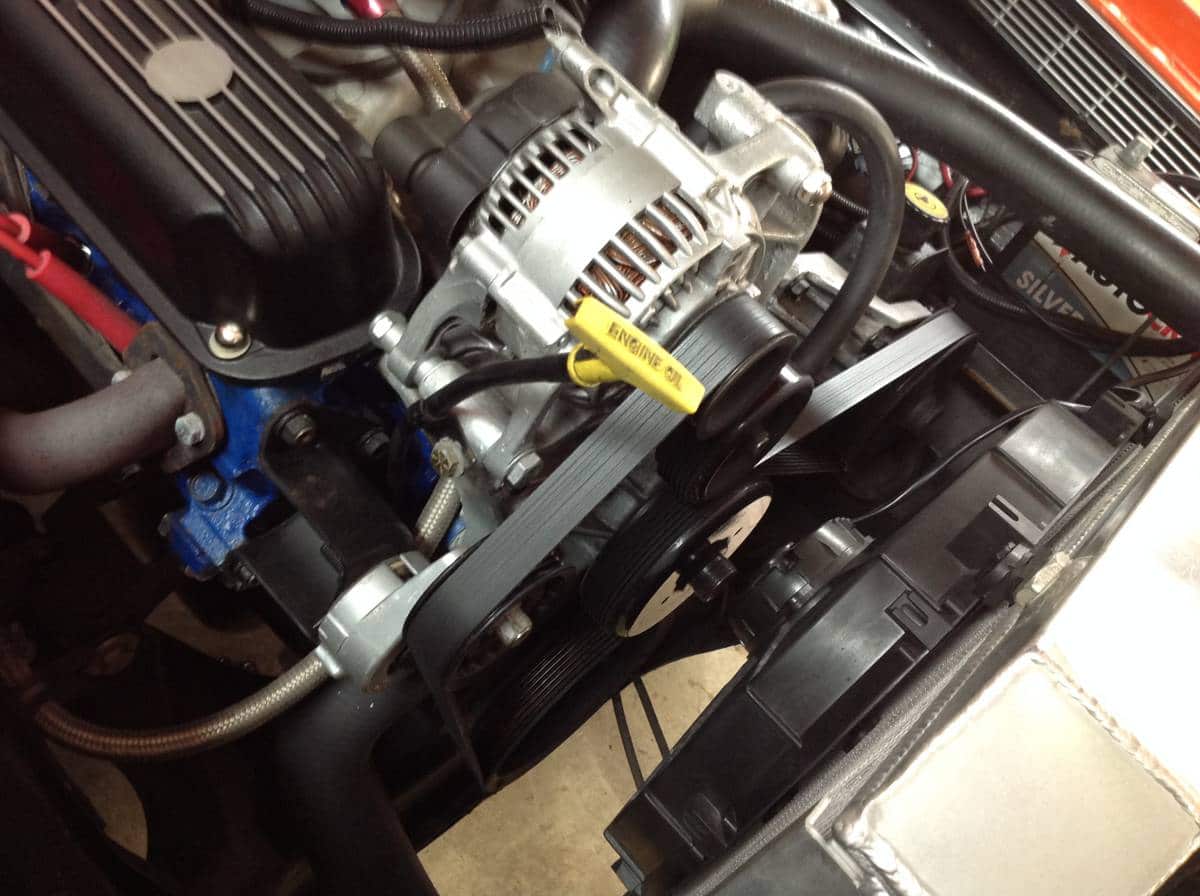 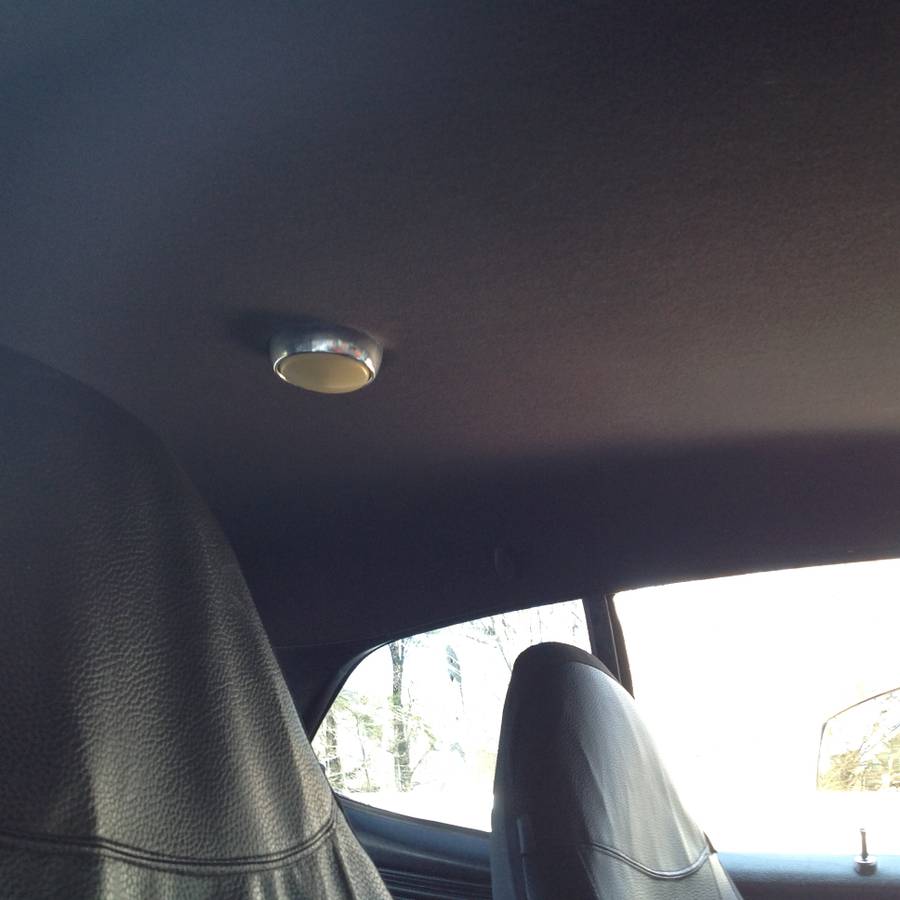 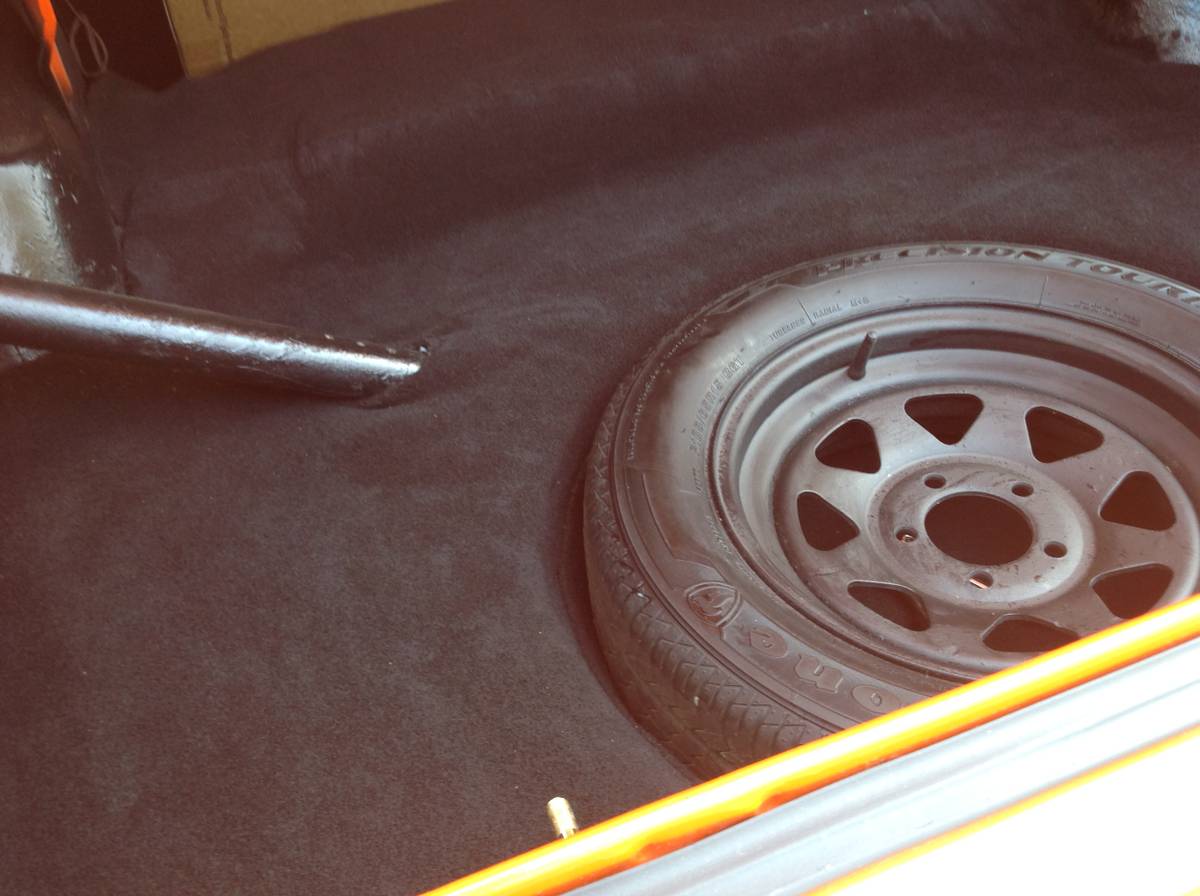 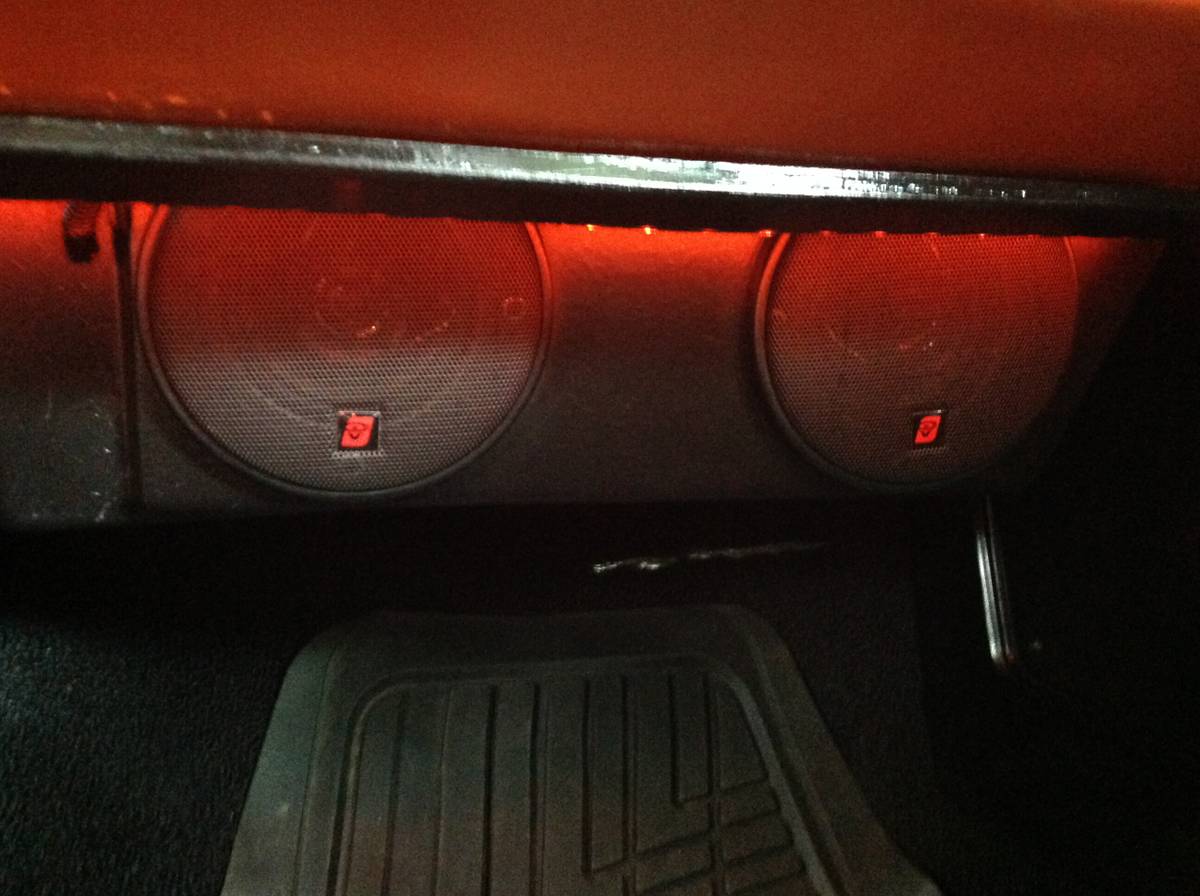 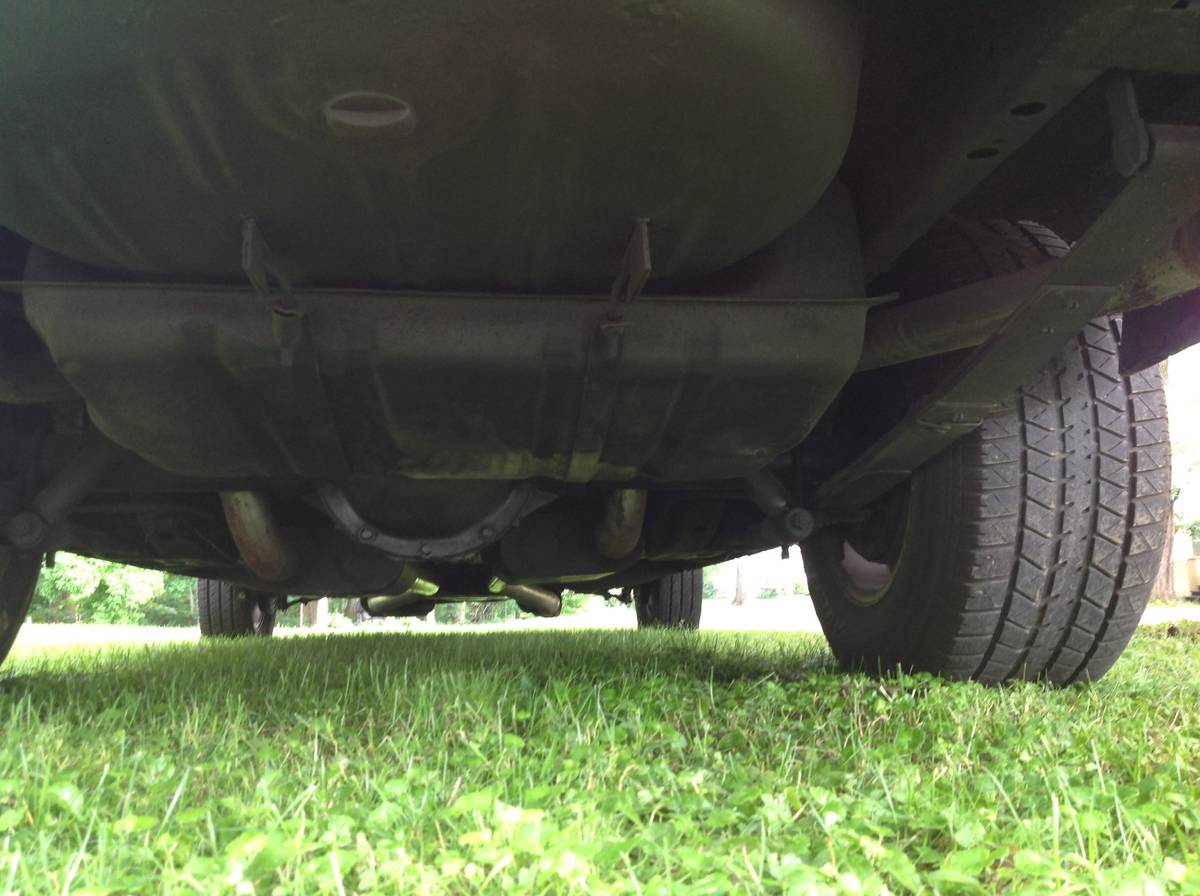 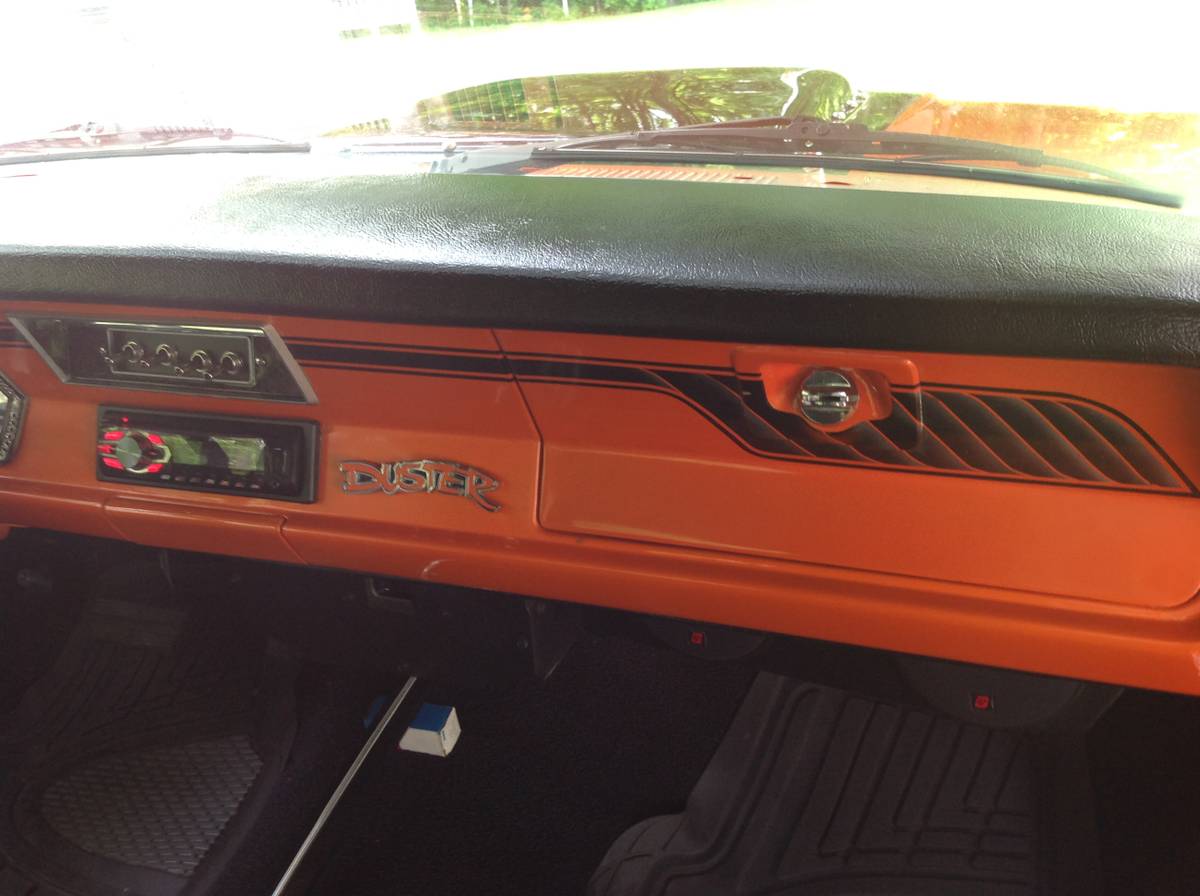 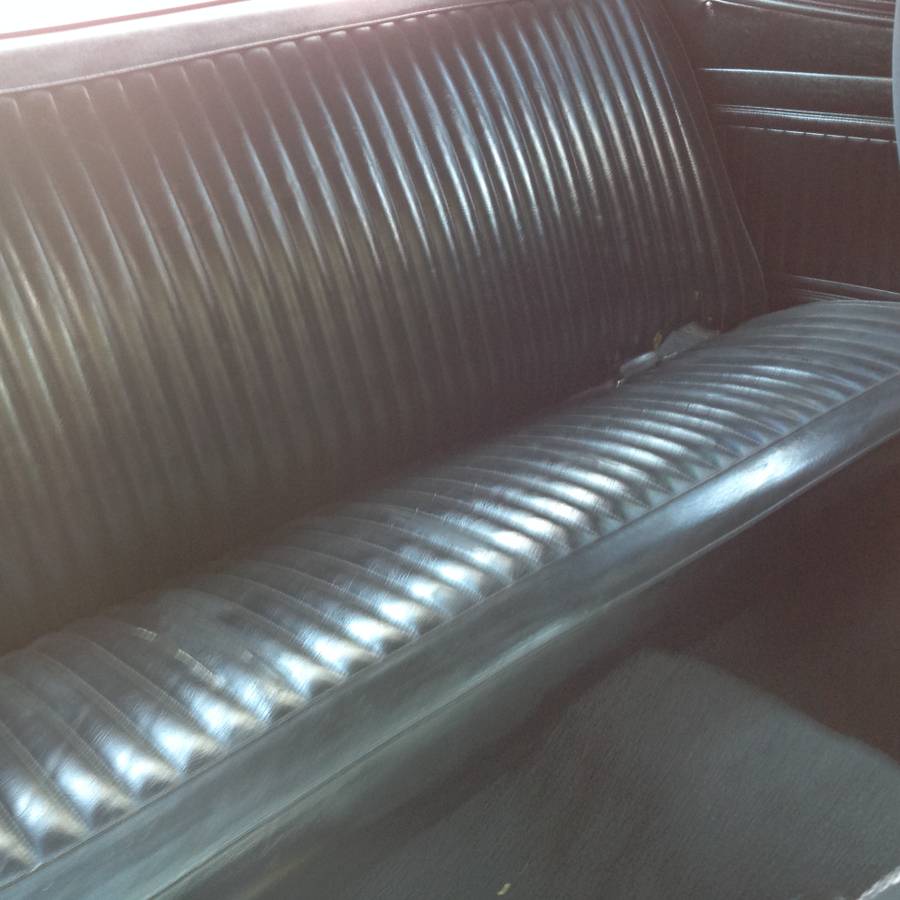 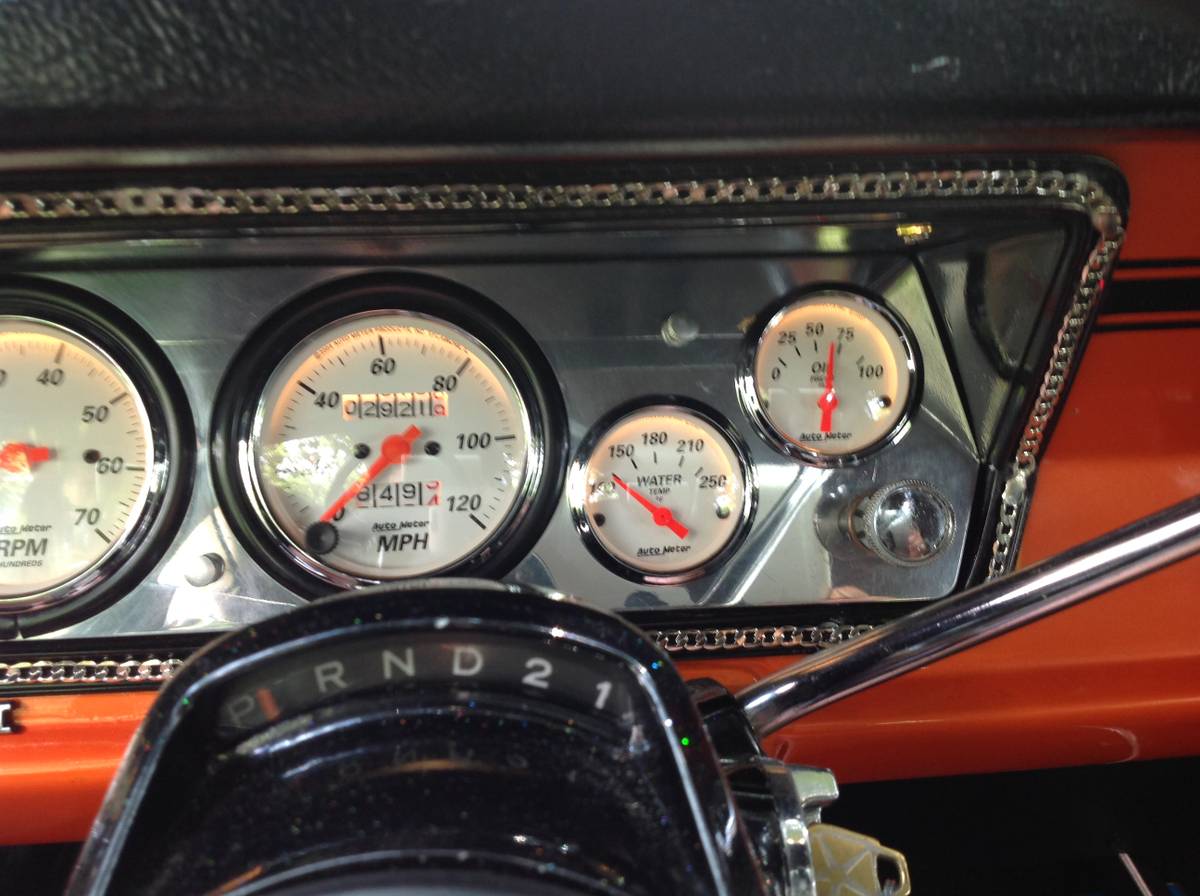 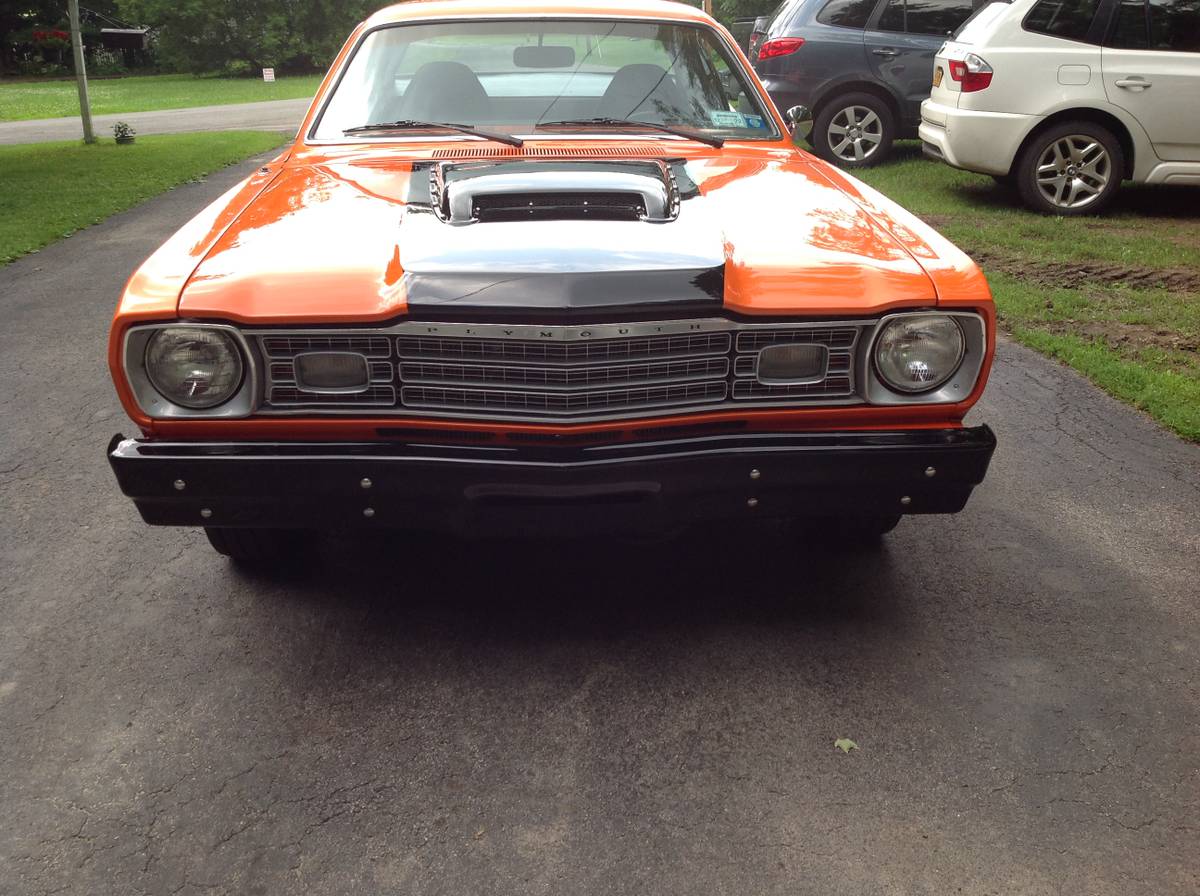 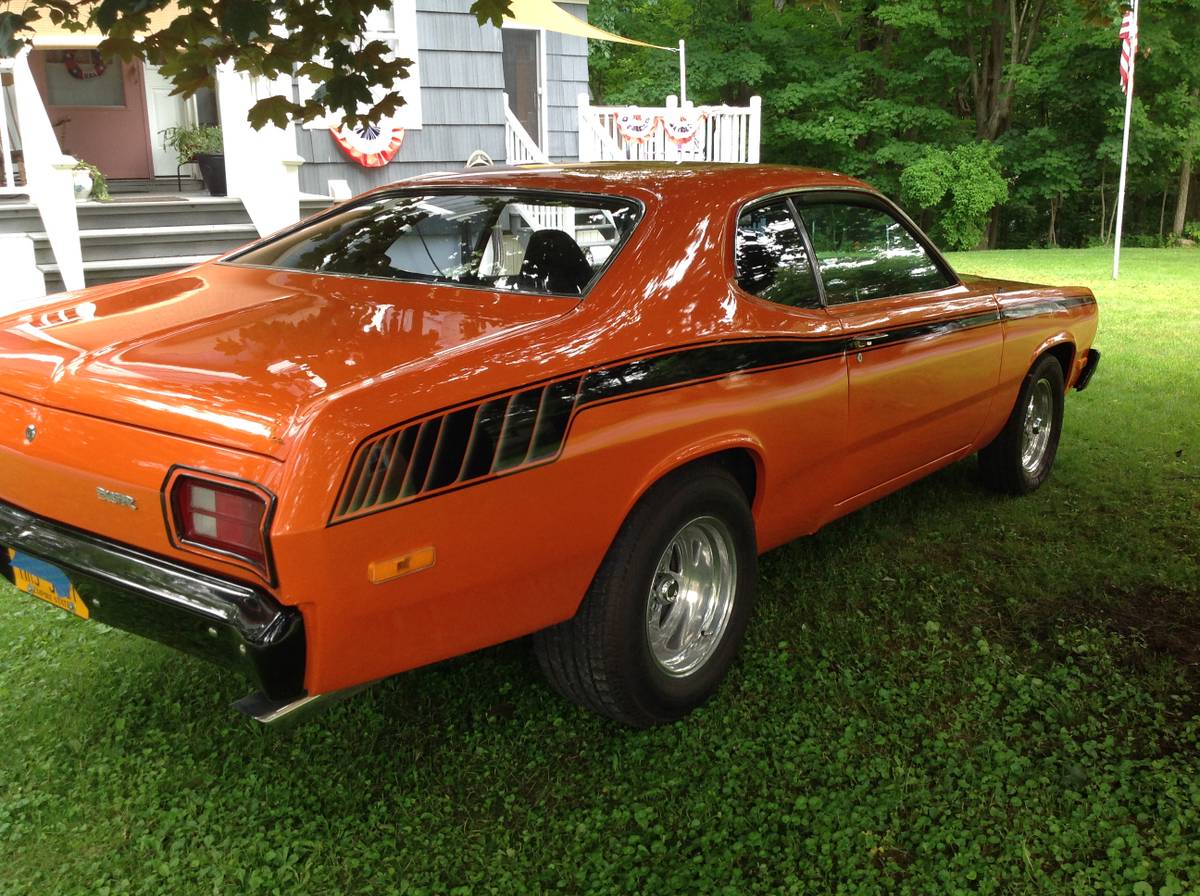 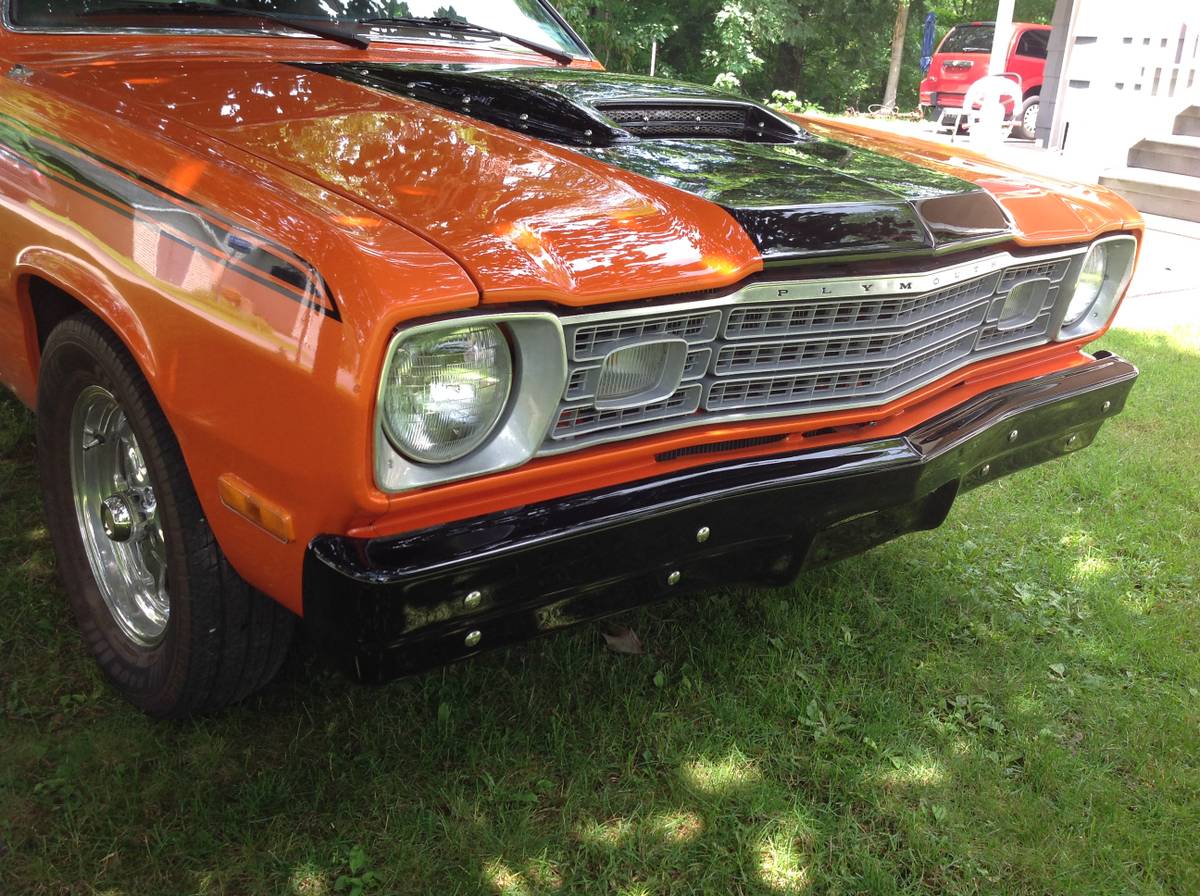 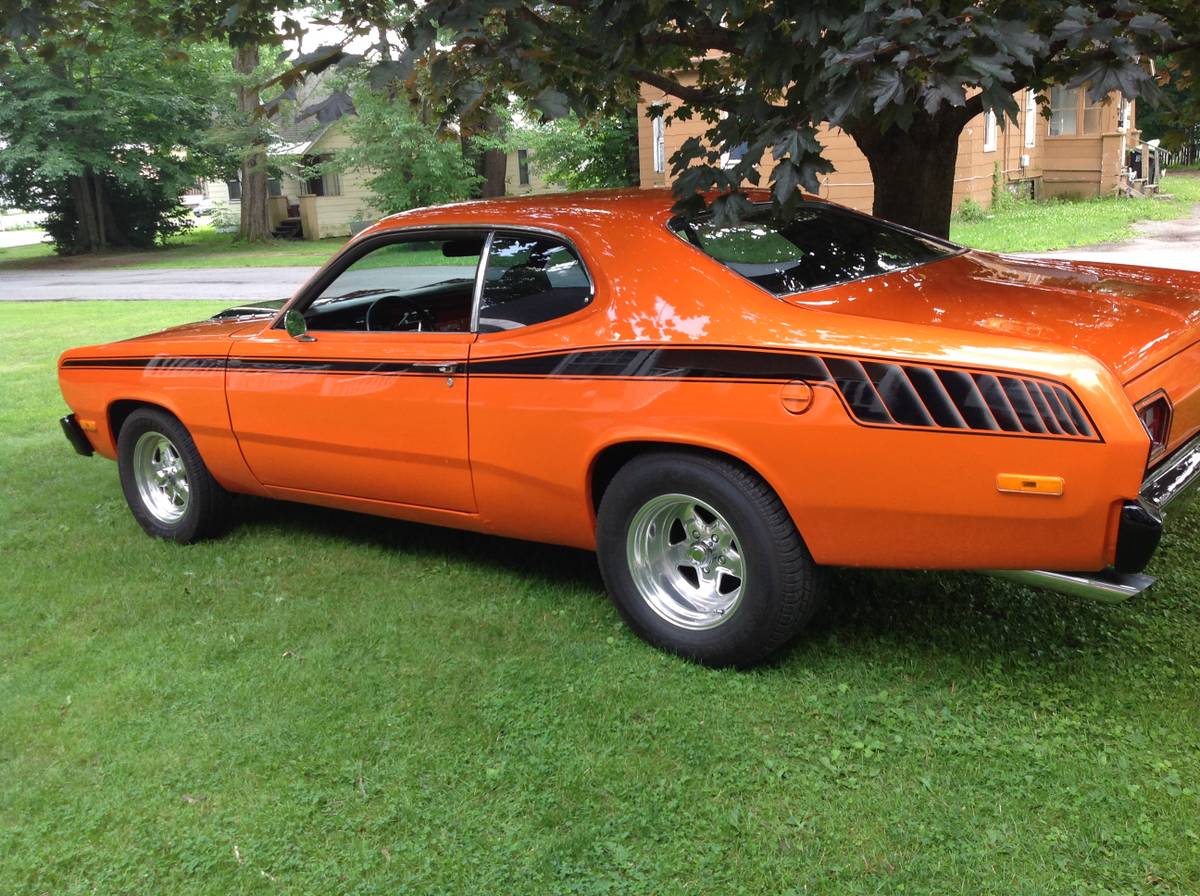 The first car we successfully helped sell here on GuysWithRides.com was this 1972 Plymouth Duster 340 Clone.  Not surprising then is how much of a soft spot we have for these cars. While we’re pleased to see market values for these cars continue to rise, the downside is the optimistic pricing some sellers believe their car is now worth.  While real-deal 340 Dusters now fetch nearly thirty large and tributes push the mid-twenties price point, it’s nice to come across a restored example fitted with a 360 cubic inch crate motor and other goodies for less than $20K.  Even better is when you can find one painted Hemi Orange like this driver-quality 1973 Plymouth Duster street machine originally listed in October 2021 on Craigslist in Dolgeville, New York (Syracuse).

Currently offered at $18,500, comparing that price against the Hagerty Insurance Online Valuation Tool confirms the private seller has their Duster priced optimistically above this guide’s #1 “Concours” appraisal of $16,700. and its #1 “Concours” appraisal of $53,100.  As a second data point, the  Collector Car Market Review Online Tool reveals the seller’s ask comes in above this guide’s #1 “Excellent” appraisal of $15,200. With the seller revealing this Duster started life as a six-cylinder and its older restoration “in need of bodywork in the lower door panels”, we’re giving the seller our latest “NEW” (short for “No Effin Way!”) Award for what will likely turn out to be an optimistic asking price.

Plymouth positioned Duster to compete with Ford’s new Maverick and Chevrolet’s established Nova. While the Maverick and Nova were offered in a four-door sedan body style, Plymouth reserved the Duster nameplate only for the two-door coupe. As a stretch, Plymouth also marketed Duster as an alternative to the original Volkswagen Beetle as well as the new class of domestic subcompact cars such as the Chevrolet Vega and Ford Pinto.

For 1973 Duster received a new hood, grille, front fenders, bumpers, and taillights consistent with changes to the Valiant line.  Starting in 1973, the taillights were mounted from the outside and were trimmed in chrome. These remained unchanged through 1976. The Dodge version, the Demon, was rebranded “Dart Sport” in response to church groups’ opposition to the word, “Demon.”

Other changes were in store for the Plymouth Duster. Simpler single-piston slider-type disc brake calipers were introduced for 1973 (standard on 318-powered cars and with power-assist on 340 models), replacing the Kelsey Hayes four-piston calipers. Disc brake-equipped Dusters now had the more-common 5-lugs on a 4.5-inch wheel bolt pattern. All 340 and some 318 engine-equipped cars received the simplified 8.25″ rear axle assembly (with wheel bearings riding directly on the axle shaft and endplay being taken by C-clips); these axles also featured the 5-on-4.5″ wheel bolt pattern. (This axle assembly replaced the 8.75″ “drop-out” arrangement seen on some 1966-1972 A-bodies). The 225-powered cars retained the 5-lugs on 4″ pattern on vehicles with the standard drum brakes. A three-speed Torque Flight automatic along with a manual transmission was offered with the 225 slant six. All models received larger front wheel bearings and increased spindle diameter. Electronic ignition became standard across the board.

The MyMopar.com YouTube Channel features this vintage 1973 dealer promo comparing the Duster to the Chevy Nova and other competitors of the time:

Besides the aforementioned lower door bodywork needed, we’re also wondering why the seller/builder opted to install an electric heater rather than rely on the original heater core setup.

Show or go: what would you do with this 1973 Plymouth Duster street machine?  Comment below and let us know!