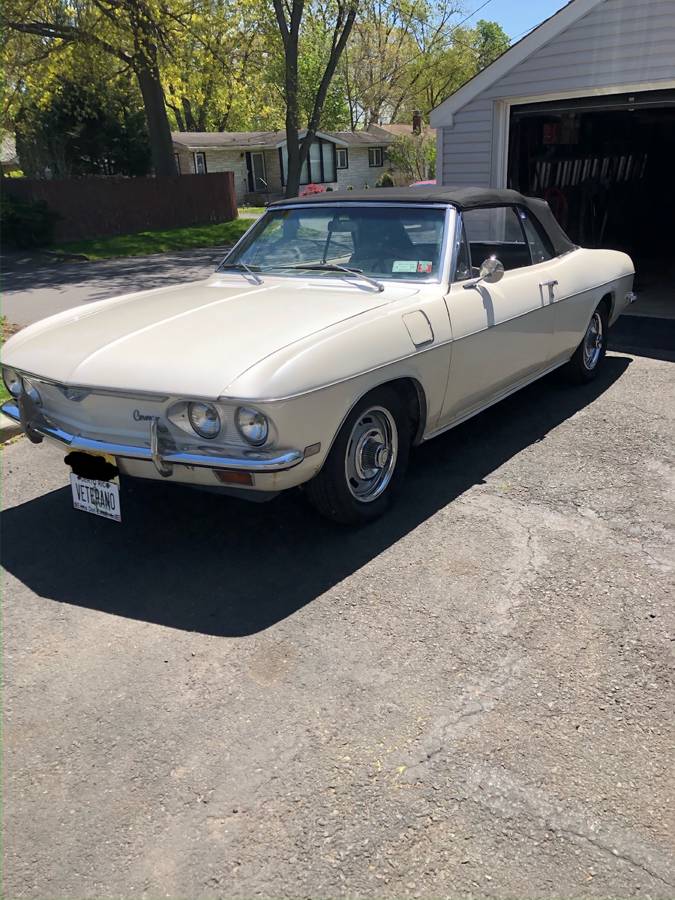 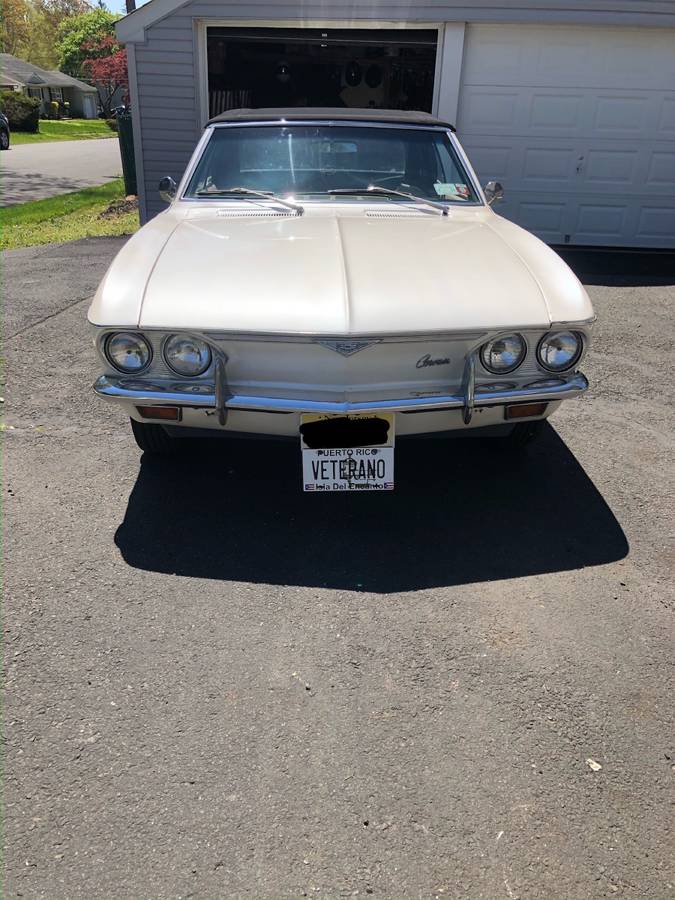 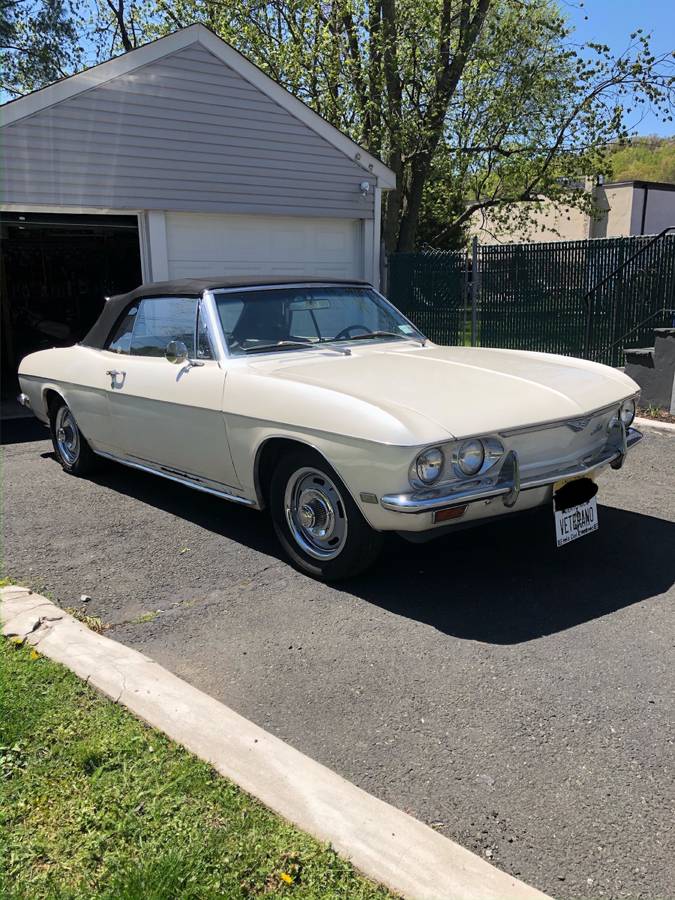 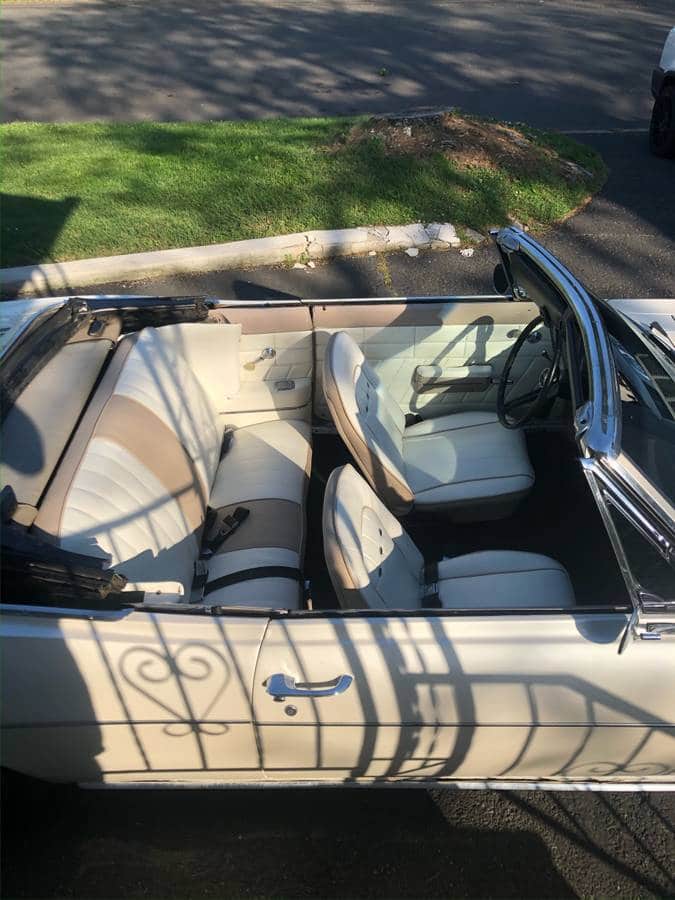 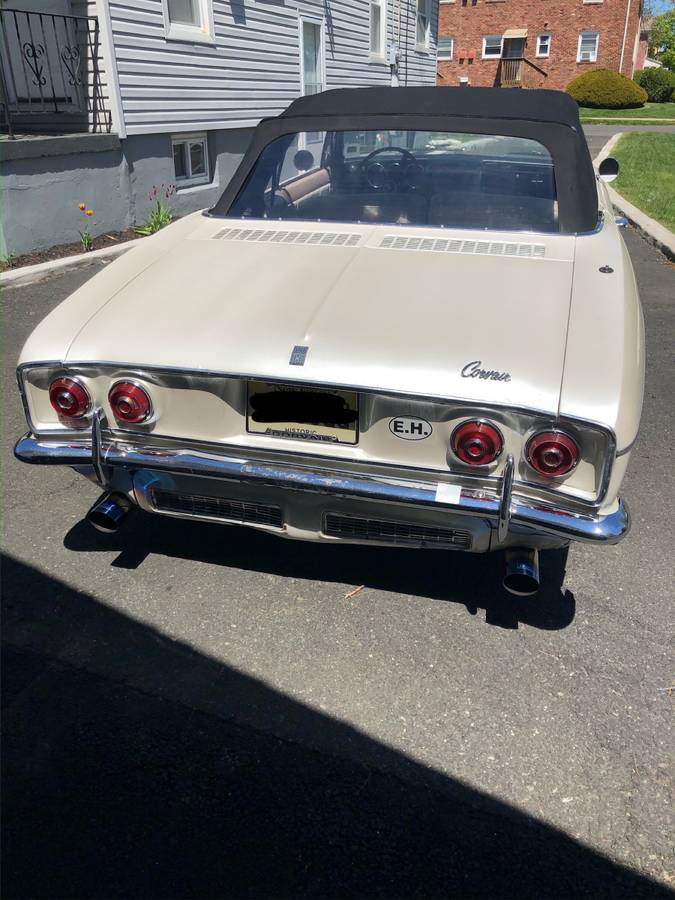 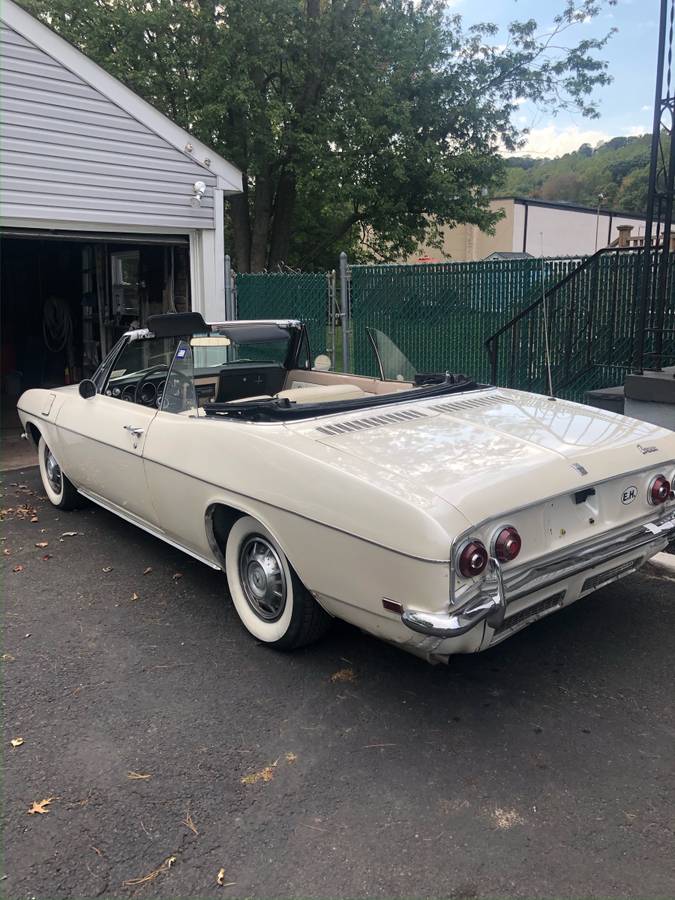 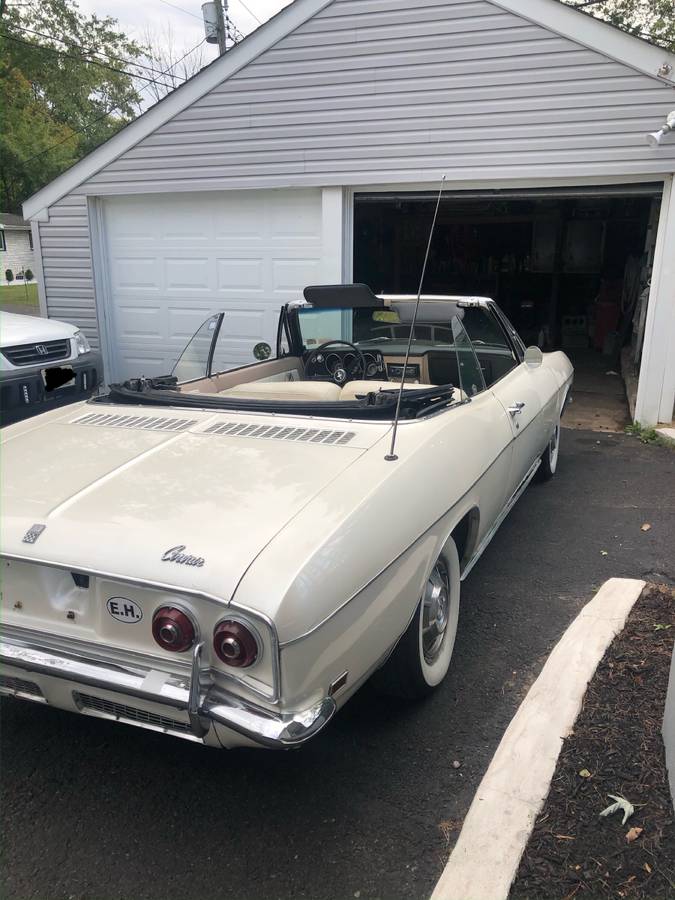 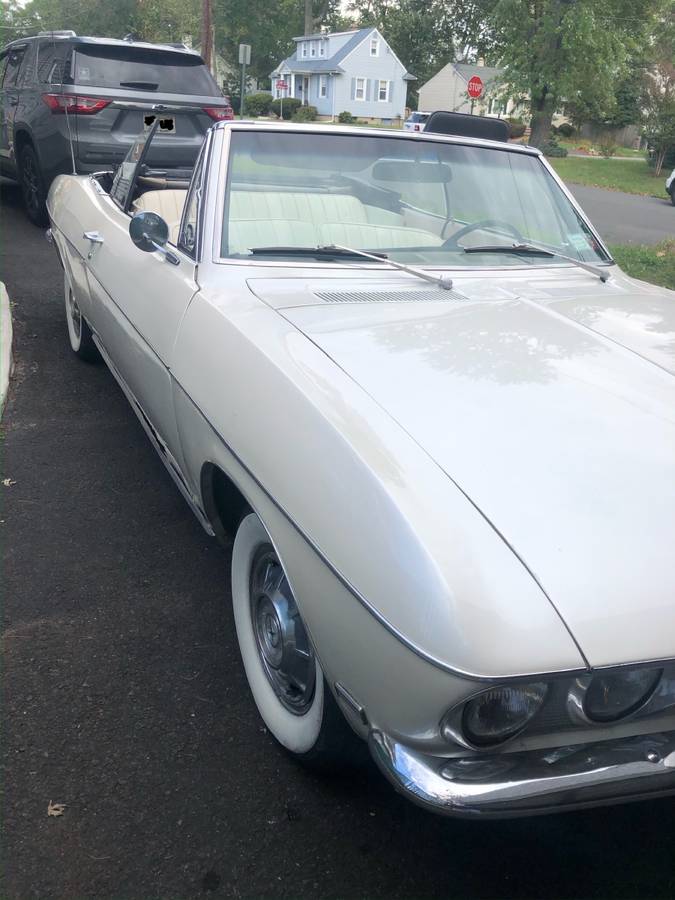 December 15, 2021 Update – We just confirmed the listing for this “Classifind” expired, so with no replacement found we’re assuming this ride “Sold?” While this one got away, please reach out either by email or call us directly if you’d like to be informed when we come across something similar.

While common knowledge attributes the Chevrolet Corvair’s slow decline to Ralph Nader’s book Unsafe at Any Speed, in reality, the wild popularity of the Ford Mustang combined with sales cannibalized by Chevrolet’s own Nova, Chevelle, and Camaro lines were all bigger factors.  This is especially true given the fact the 1965 Corvair redesign not only was an attractive car, but its coil-sprung, independent rear suspension negated Nader’s criticism of the first-generation version. It’s a shame as later examples like this 1968 Chevrolet Corvair Monza convertible originally listed in November 2021 on Craigslist in Plainfield, New Jersey prove the later models were excellent handling cars.

The private seller and second owner of this nicely preserved all beige 1968 Chevrolet Corvair Monza Convertible asking $15,000 or best offer. A check of the Hagerty Insurance Online Valuation Tool confirms that falls between the #2 “Excellent” appraisal of $18,500 and the #3 “Good” estimate of $11,900. The Collector Car Market Review Online Tool provides a second data point indicating the private seller has his car priced $500 higher than the #1 “Excellent” appraisal of $14,900.

Chevrolet engineers and stylists really had a winner in concept on their hands when they redesigned the Corvair line for 1965.  Major changes included new pillarless two- and four-door models as well as a new fully independent suspension replacing the original swing-axle design. The Corvair used coil springs at each wheel.  The standard 95 horsepower and optional 110 horsepower engines were carried forward from 1964. The previous 150 horsepower Spyder engine was replaced by a normally aspirated 140 horsepower unit for the new Corsa. The engine was unusual in offering four single-throat carburetors, to which were added larger valves and a dual exhaust system. A 180 horsepower turbocharged engine was optional on the Corsa, which offered either standard three-speed or optional (US$92) four-speed manual transmissions.  The 140 horsepower engine was optional on 500 and Monza models with manual or Powerglide transmissions. All engines received some of the heavy-duty internal parts from the Turbocharged engine for better durability.

New refinements appeared on the 1965 redesign.  The Corsa came standard with an instrument panel featuring a 140 mph speedometer with resettable trip odometer, a 6,000 rpm tachometer, cylinder head temperature gauge, analog clock with a sweeping second hand, a manifold vacuum/pressure gauge, and fuel gauge. A much better heater system, larger brakes borrowed from the Chevelle, a stronger differential ring gear, an alternator (replacing the generator), and significant chassis refinements were made. A new fully articulated rear suspension virtually eliminated the danger of the previous generation’s swing axles and was based on the contemporary Corvette Sting Ray (Corvair used coil springs while the Sting Ray uses a transverse leaf). Additionally, an AM/FM stereo radio, in-dash All Weather Air Conditioning, telescopically adjustable steering column, and a Special Purpose Chassis Equipment (“Z17”) handling package, consisting of a special performance suspension and quick ratio steering box, were new options for 1965. The Monza and Corvair 500 Sports Sedans were the only compact cars ever available in the U.S. as pillarless four-door hardtops.

In 1968, the four-door hardtop was discontinued, leaving three models—the 500 and Monza Hardtop Coupes and the Monza Convertible. Air conditioning was dropped as an option, due to concerns about thermal loading added by the now-standard Air Injection Reactor (“smog pump”) which probably hurt sales as factory air became more popular generally in automobiles. The GM multiplex stereo system was also discontinued when new units changed wiring adapters; the Corvair’s 9-pin connector would no longer fit the new units. Additional safety features, including side marker lights, and shoulder belts for closed models, were fitted per the federal government’s requirements. The steering wheel for 500s was the same as the base Nova’s, while Monzas got the same wheel as the Camaro. An Impala-style “Deluxe” steering wheel was optional. All advertising was stopped and sales were down to 15,400.

This 1966 Chevrolet Corvair convertible commercial featured on the TV Toy Memories YouTube Channel was likely the last of Corvair advertising as Chevrolet Marketing pulled all promotion after this model year:

We love the color combination, the brand-new refreshed interior, and the two-owner provenance of this 1968 Chevrolet Corvair Monza convertible.

Starts and runs great! Open to trades, no projects or junk.“

Show or go: what would you do with this 1968 Corvair Monza Convertible?  Comment below and let us know! 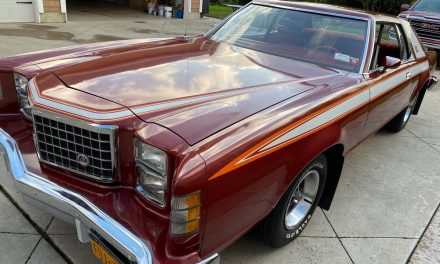 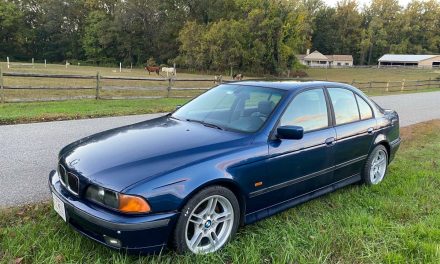 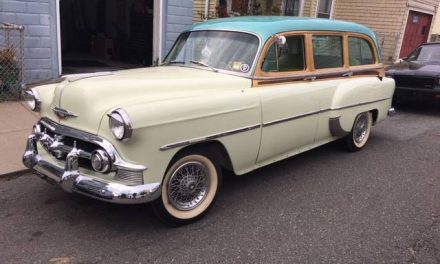 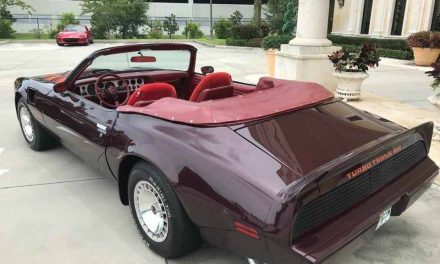