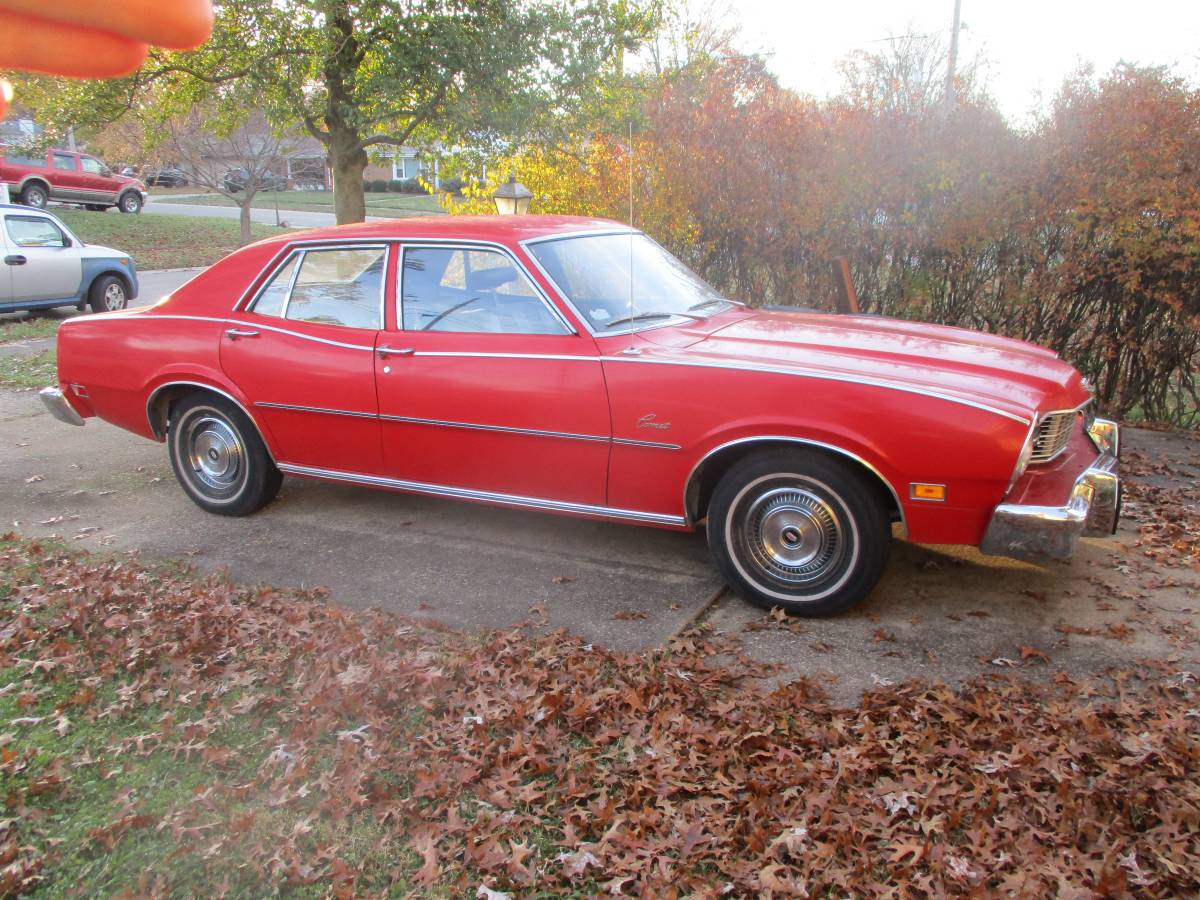 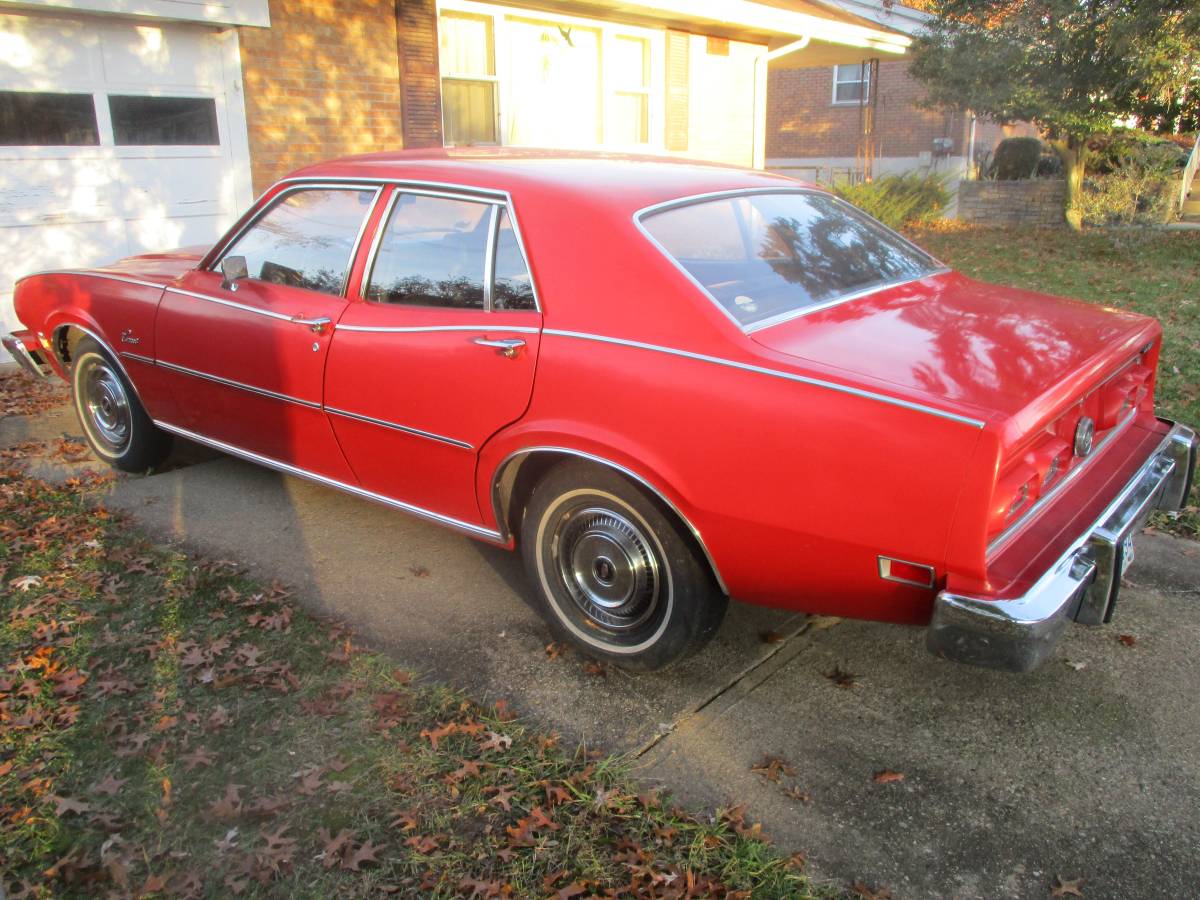 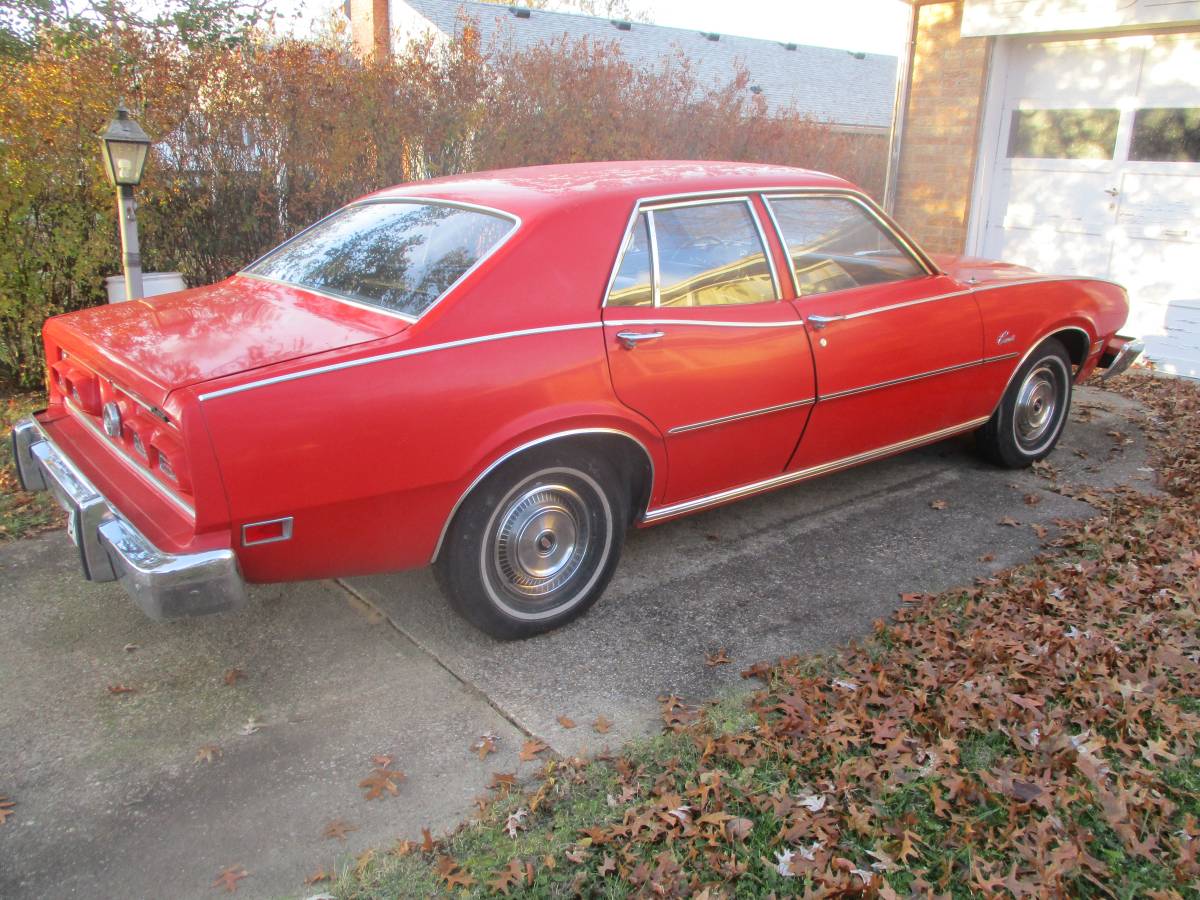 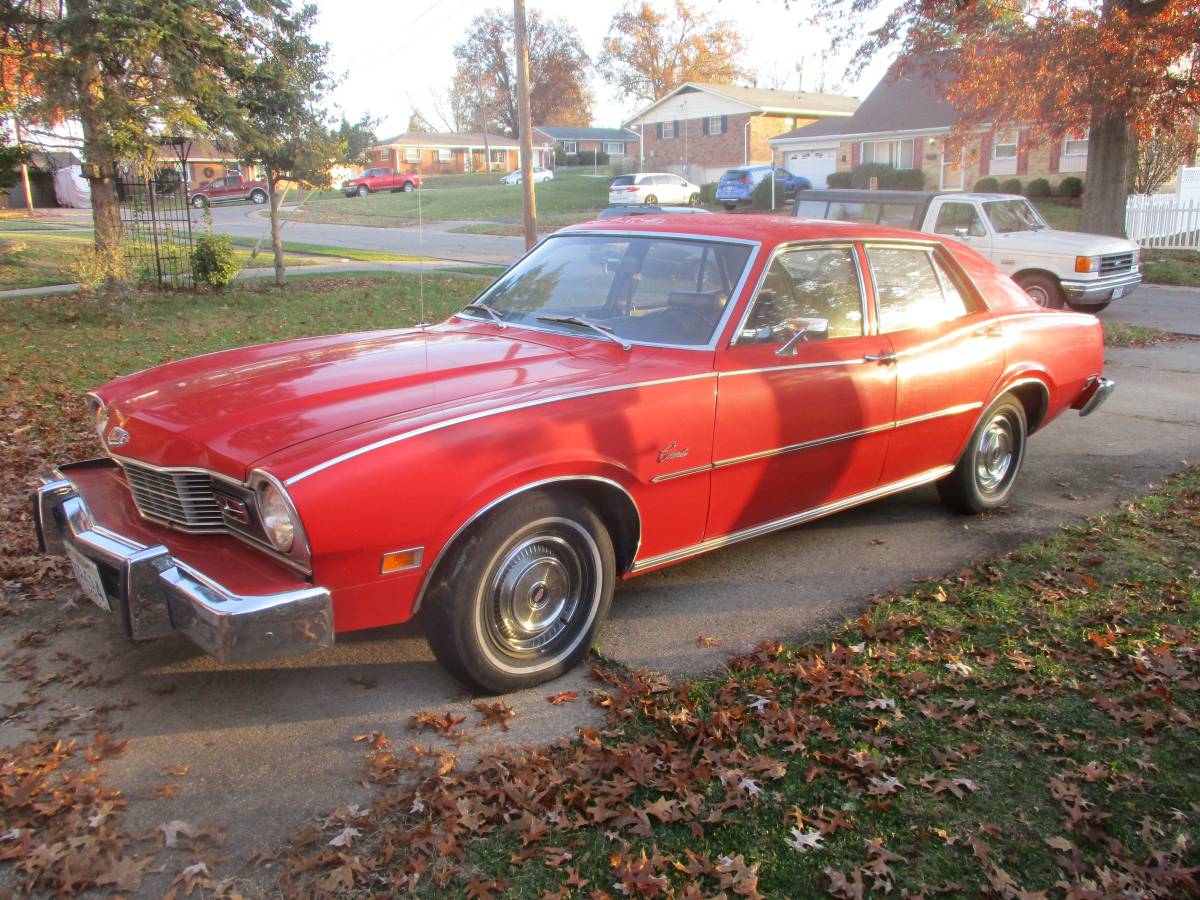 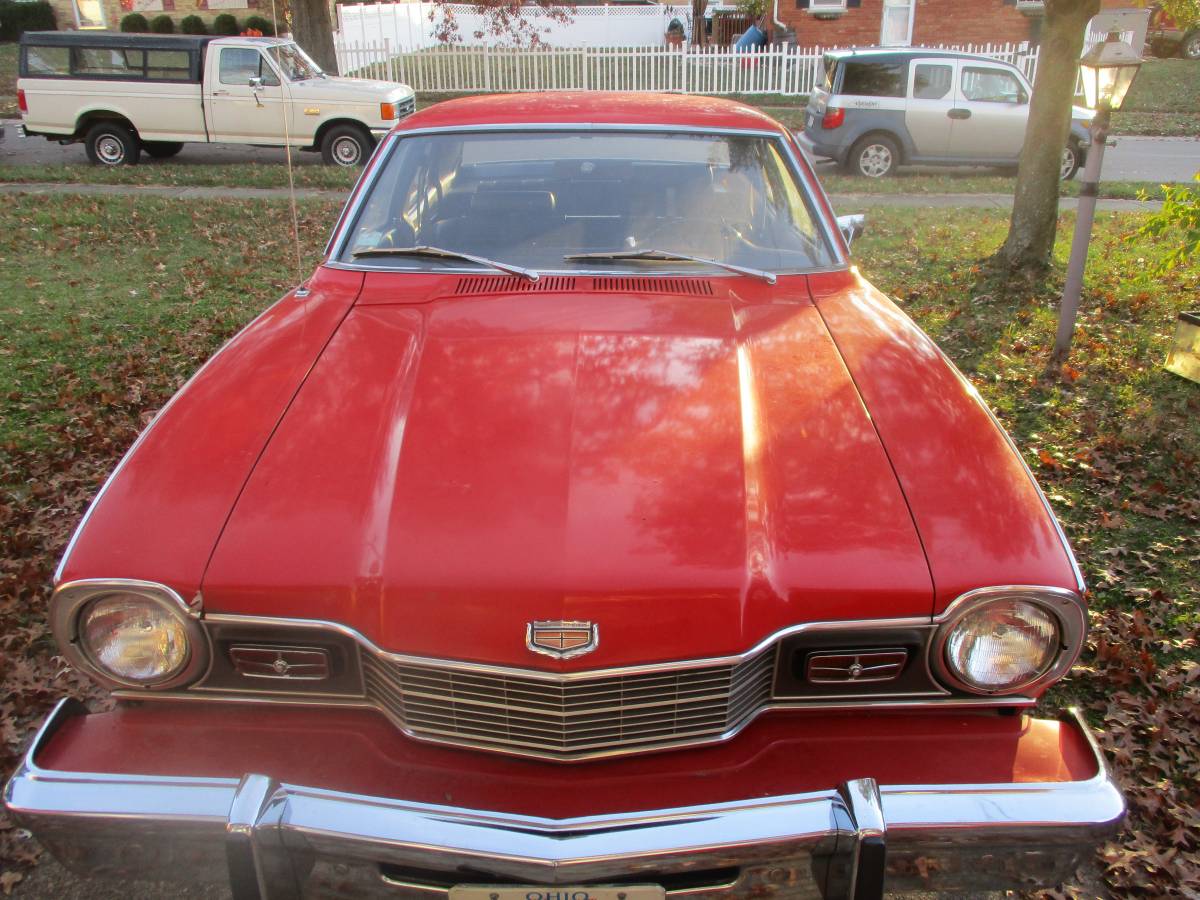 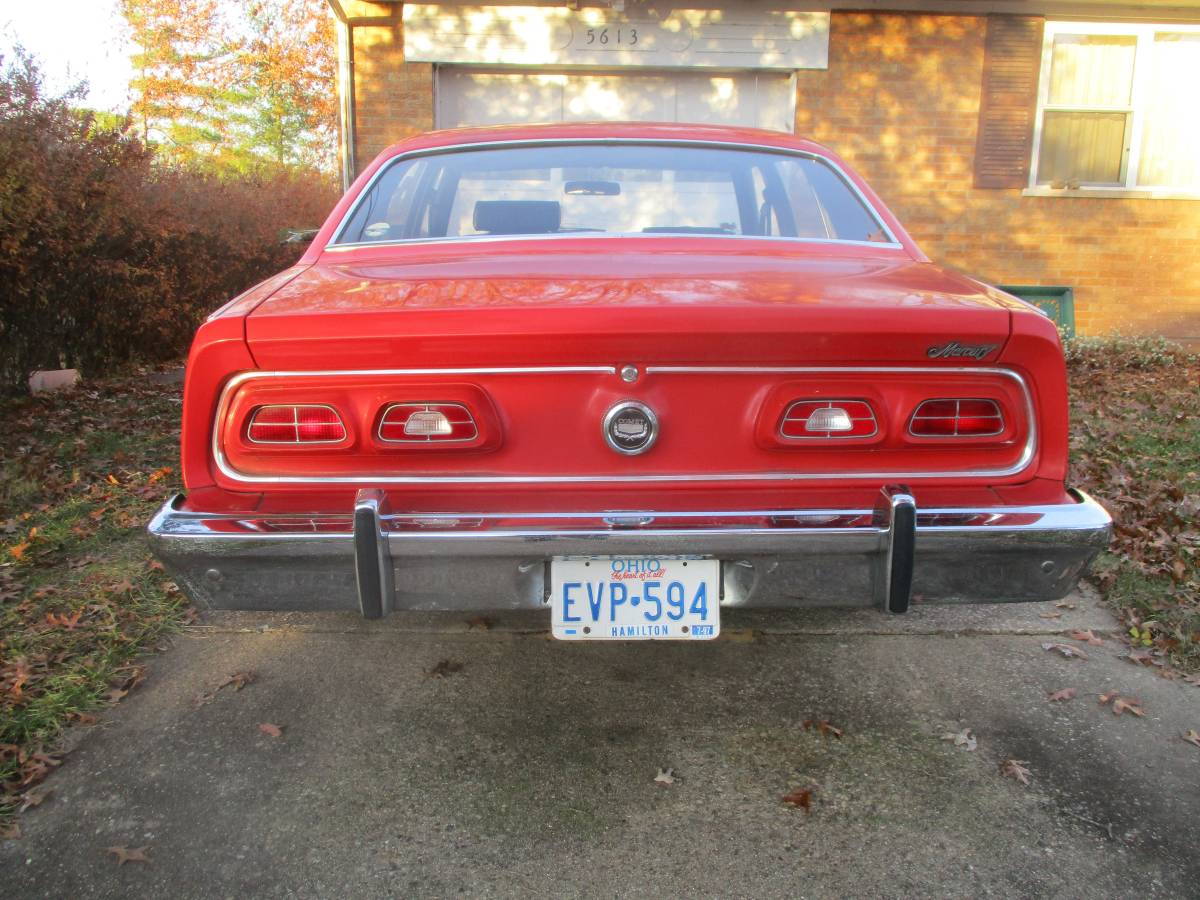 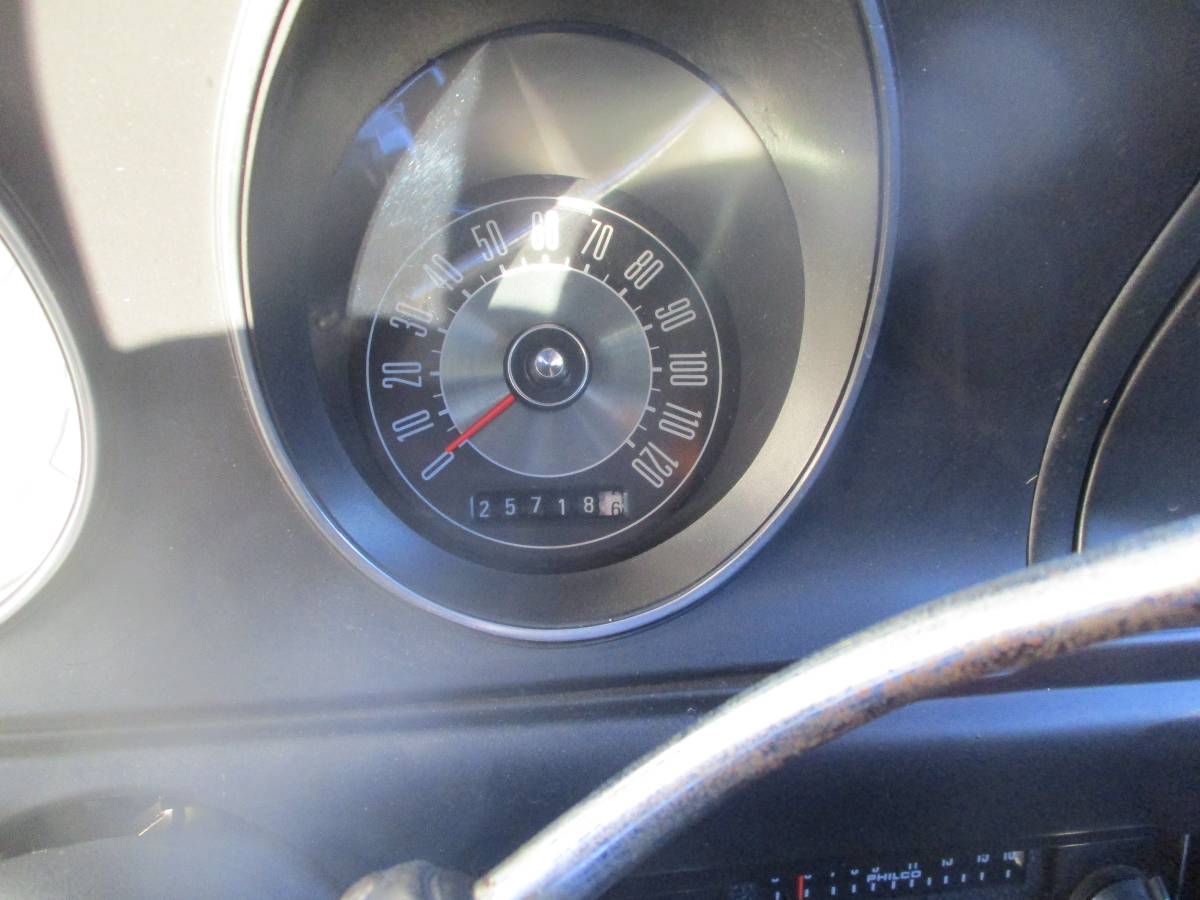 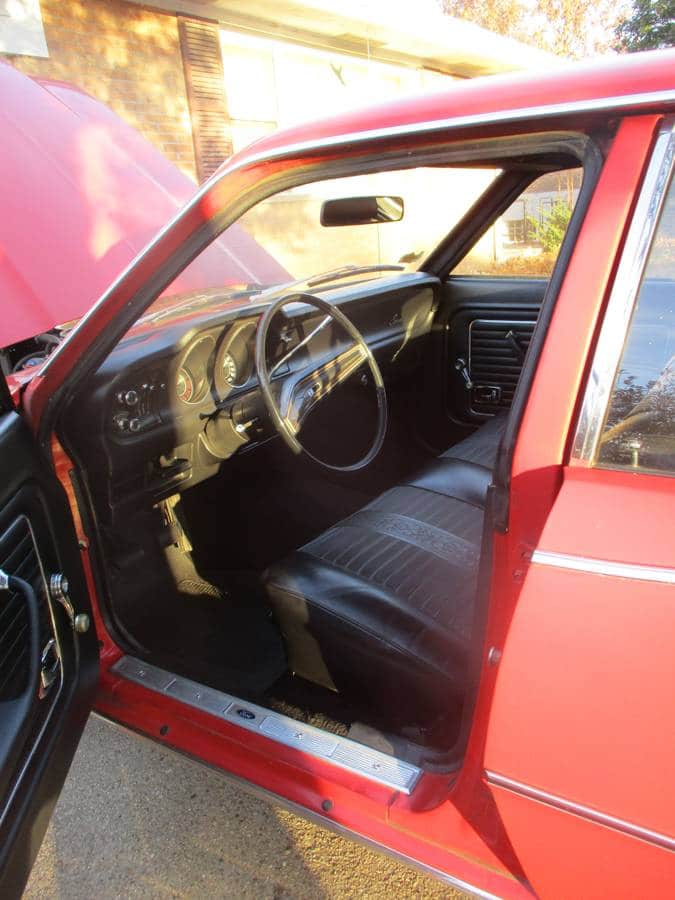 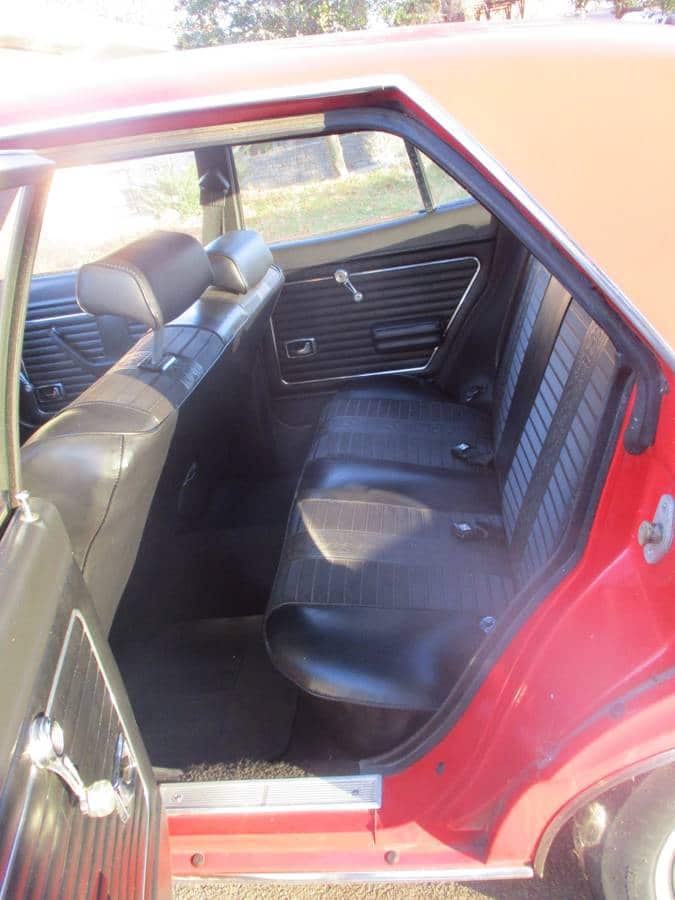 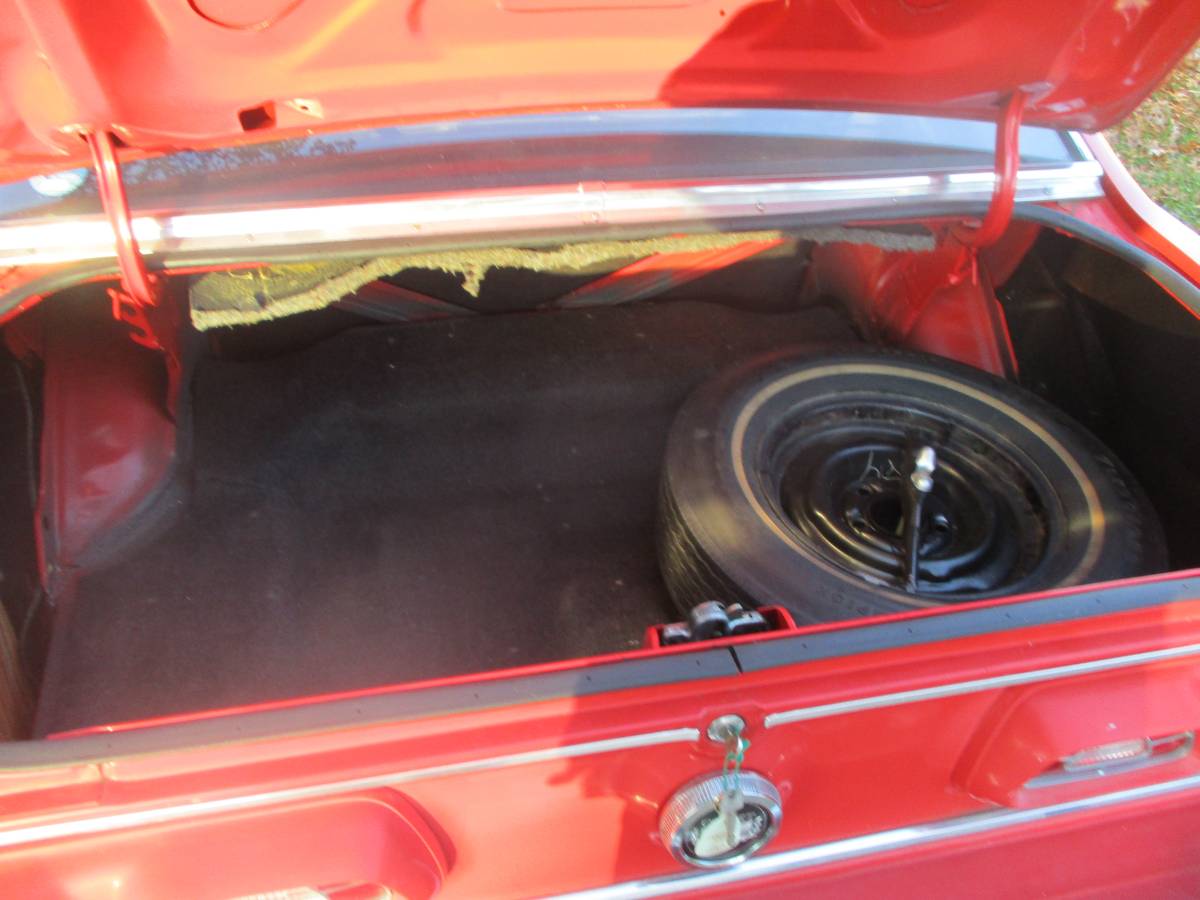 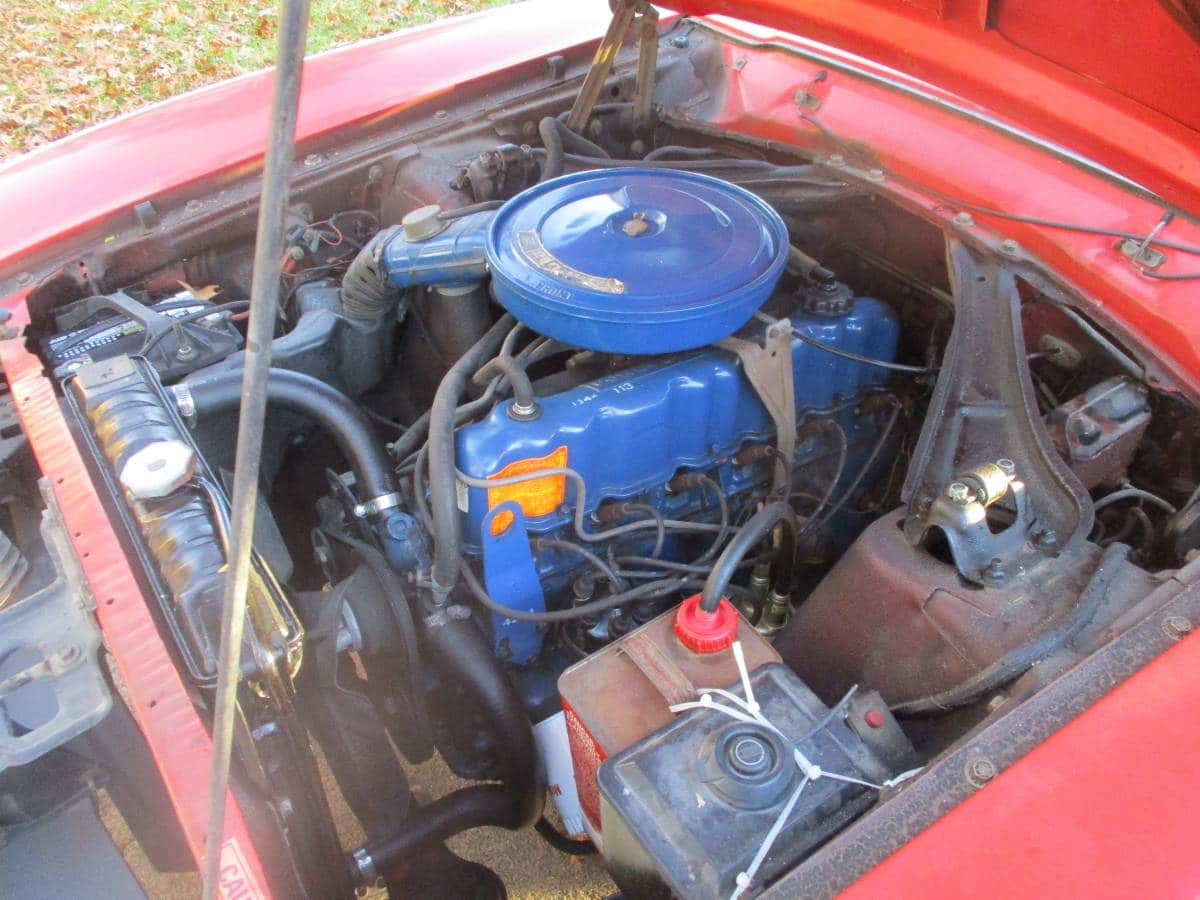 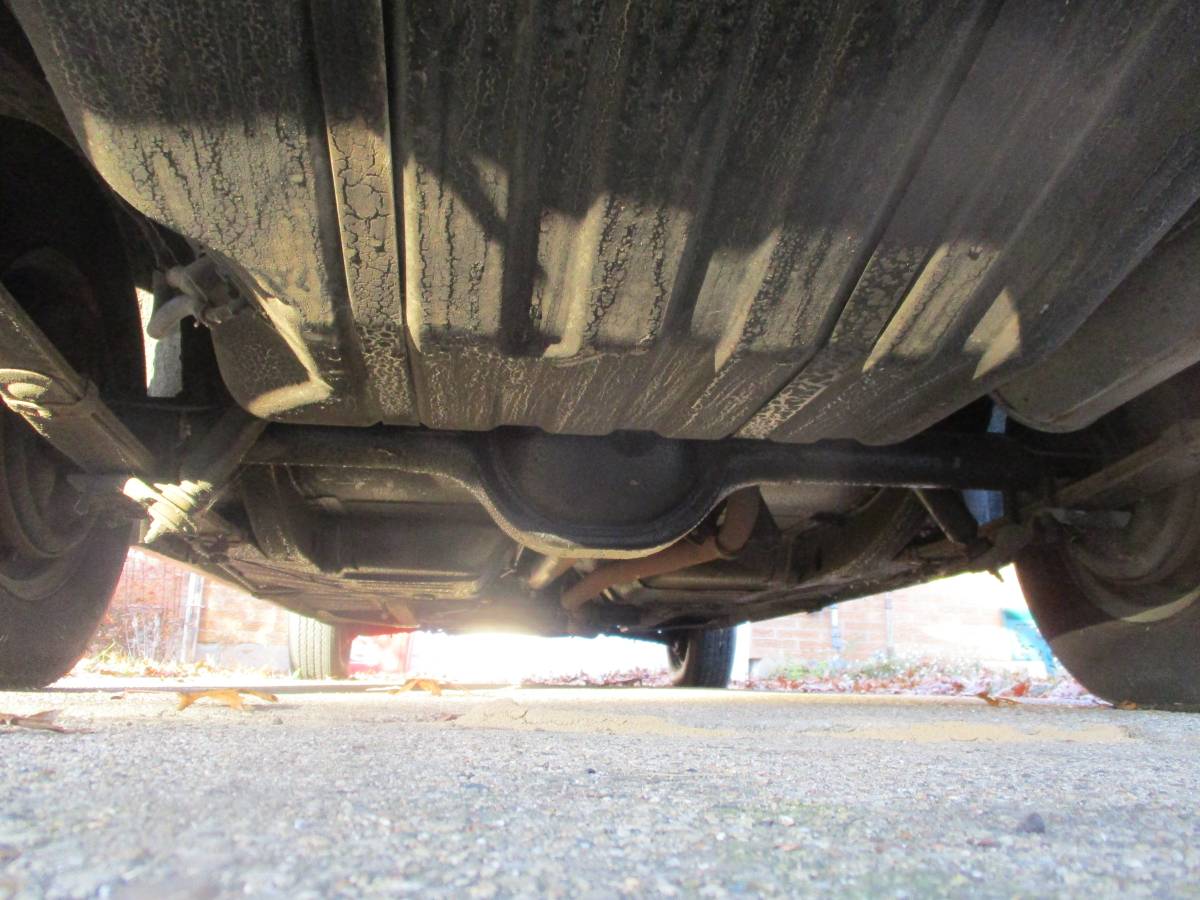 January 2, 2022 Update – We just confirmed the listing for this “Classifind” expired, so with no replacement found we’re assuming this ride “Sold?” While this one got away, please reach out either by email or call us directly if you’d like to be informed when we come across something similar.

The U.S. five-mile-per-hour bumper rule was phased in over two model years.  Front bumpers had to meet the no-damage standard for model year 1973 while the law expanded to rear bumpers for 1974. The collateral damage was that many cars designed before 1973 ended up receiving redesigned bumpers that looked downright ridiculous. One of the worst designs were the monstrosities Ford designers tacked onto the Maverick and badge-engineered Mercury Comet.  This red-over-black, 25K original mile, 1974 Mercury Comet four-door sedan originally listed in December 2021 on Craigslist in White Oak, Ohio (Cincinnati) illustrates just how bad the bumpers appeared on what was once a decent-looking entry-level car.

So while big bumpers normally have us look past most 1970s vintage Mavericks and Comets, this example caught our eye for several reasons. First is the no-option, three-on-the-tree, basic transportation this car left the factory as. Second is the extremely low (25K) original miles. The third is the fact the seller had to look no further than his father’s garage to find this classic. Finally, the only option the father appears to have splurged on when the car was new was Ziebart rust-proofing.  Having a new car “Ziebarted” was a several hundred dollar investment back in the seventies, but it proved to be worth every penny.

While all of these factors conspire to provide the perfect classic car provenance, on a 1974 Mercury Comet it’s only good enough to elicit a $4,500 asking price Comparing that price against the Collector Car Market Review Online Tool confirms the seller’s ask falls between this guide’s #2 “Very Good” estimate of $4,300 and its #1 “Excellent” appraisal of $6,700 before factoring in a fifteen percent discount for the three-speed manual and lack of power steering.

For the 1971 model year, Mercury revived the Comet name for its brand-engineered version of the new Ford Maverick compact. Sharing most of its sheet metal with the Maverick, it used a different grille, taillights, and hood, as well as different badging. The taillight pods were shared with the 1970 and 1971 Montego and Cyclone models. Underneath it all was the same basic chassis that had originally been used for the Ford Falcon, the original Comet, and for the mid-sized Ford Fairlane, Mercury Meteor, and later Mercury Comets.

The base engine was the 170 cubic inch inline-six with a single-barrel carburetor producing 100 horsepower at 4200 rpm. Transmissions were either a three-speed manual or three-speed automatic with either column or floor-mounted shifters.  The Comet was available as two- and four-door sedans.

For 1973 models, Ford replaced the 170 cubic inch inline-six with a 200 cubic inch six became the base engine to compensate for power lost due to increased emission controls. A new, larger front bumper to meet federal standards was added to all models in 1973. Changes for 1974 included even larger front bumpers and new larger rear bumpers to match due to new federal mandates for safety. They added four inches to the length of the four-door model.

The Osborne Tramain YouTube Channel features this 1974 Mercury Comet commercial attempting to pitch the car as a gas saver:

While this plain jane, entry-level four-door sedan may not be the sexiest classic car to buy, at less than five large, you would be hard-pressed to find an alternative that could put you in the running for an Antique Automobile Club of America (“AACA”) preservation class “Junior” award once you replace the hoses, belts, and tires as well as get the car running from its original fuel system.

“1974 Mercury Comet 200 Inline 6. 4 door. 3-speed manual transmission. It has not a speck of rust and original paint. It was “Ziebarted” when new. This is as simple an automobile to work on as you can find. It was ordered with no options. Manual steering, no power brakes, no air conditioning, AM radio, no power anything. 25718 original miles, one owner. I recently resurrected this from a 25-year slumber in my father’s garage. Dad bought this new, I went with him to pick it up at Ford dealership in Hillsboro. Before attempting to start, I pulled the plugs and lubricated the cylinders. I chose to NOT pull gasoline from the tank, but from a one-gallon can I put under the hood. I installed a new starter, which it needed, or the old one serviced. I still have the old one. Then she fired right up, but with a leaking fuel pump, which I then replaced. I flushed the coolant and put in new. Mechanical choke works for high idle starting loop. It runs, drives, and stops. With all of this being said, it still requires some love to be a daily driver. The tires hold air, but are OLD. Belt and hoses should probably be replaced, and the brakes serviced. Passenger side front caliper sticks and causes wheel to be locked up when first moving after sitting. I don’t have time or interest to do more to this, dad has given me plenty of other things to deal with. Fuel gauge reads empty, and when I crawled under the car to see what kind of job it would be to pull the fuel tank, I tapped on the tank and it sounds empty. Perhaps the tank could be hooked right back up, filled, and that part would be ready to go. The last gasoline to be put into this car would have been non-ethanol, I would think. I leave this to the new owner’s discretion. Please reply through the Craigslist method of email response. Local sale only, in person, and CASH. Thanks for looking.​“

Show or go: what would you do with this 1974 Mercury Comet Survivor Sedan?  Comment below and let us know!