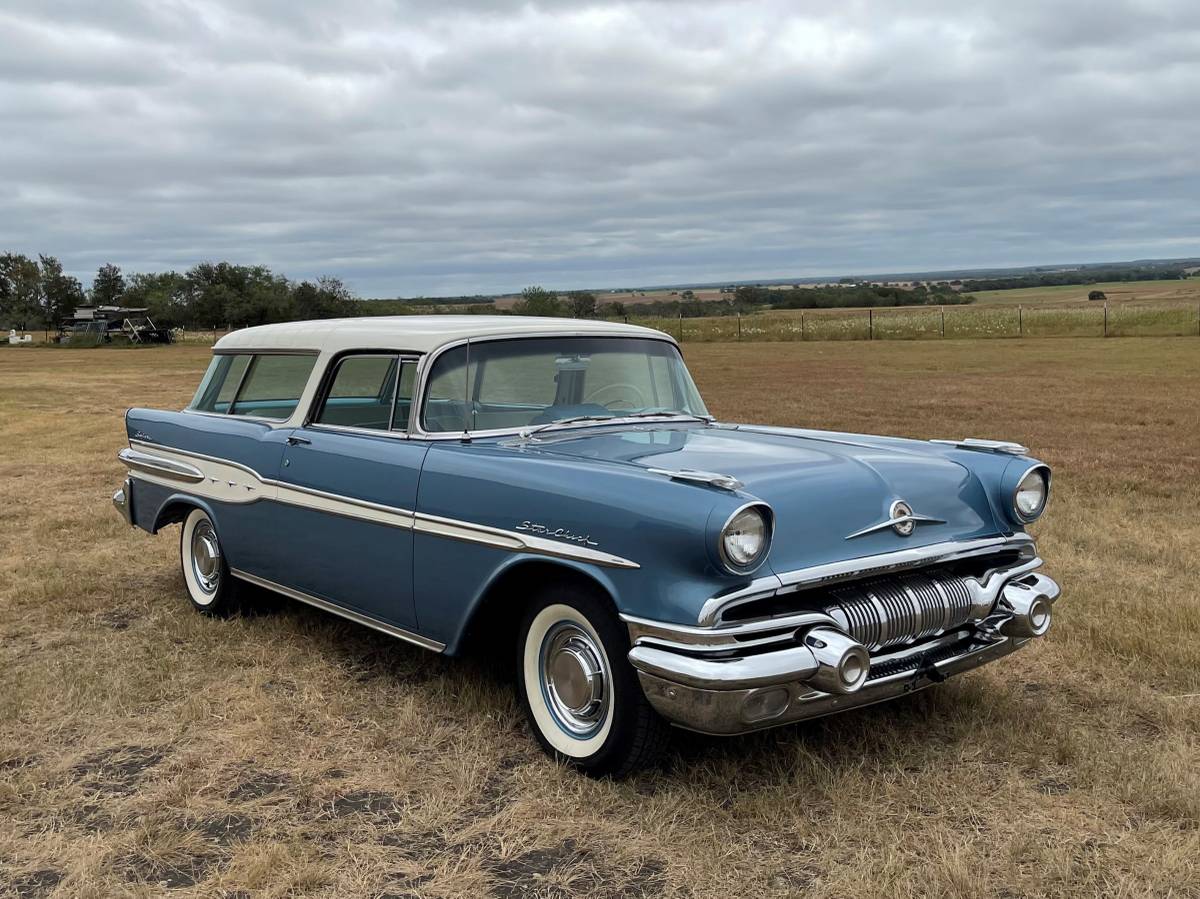 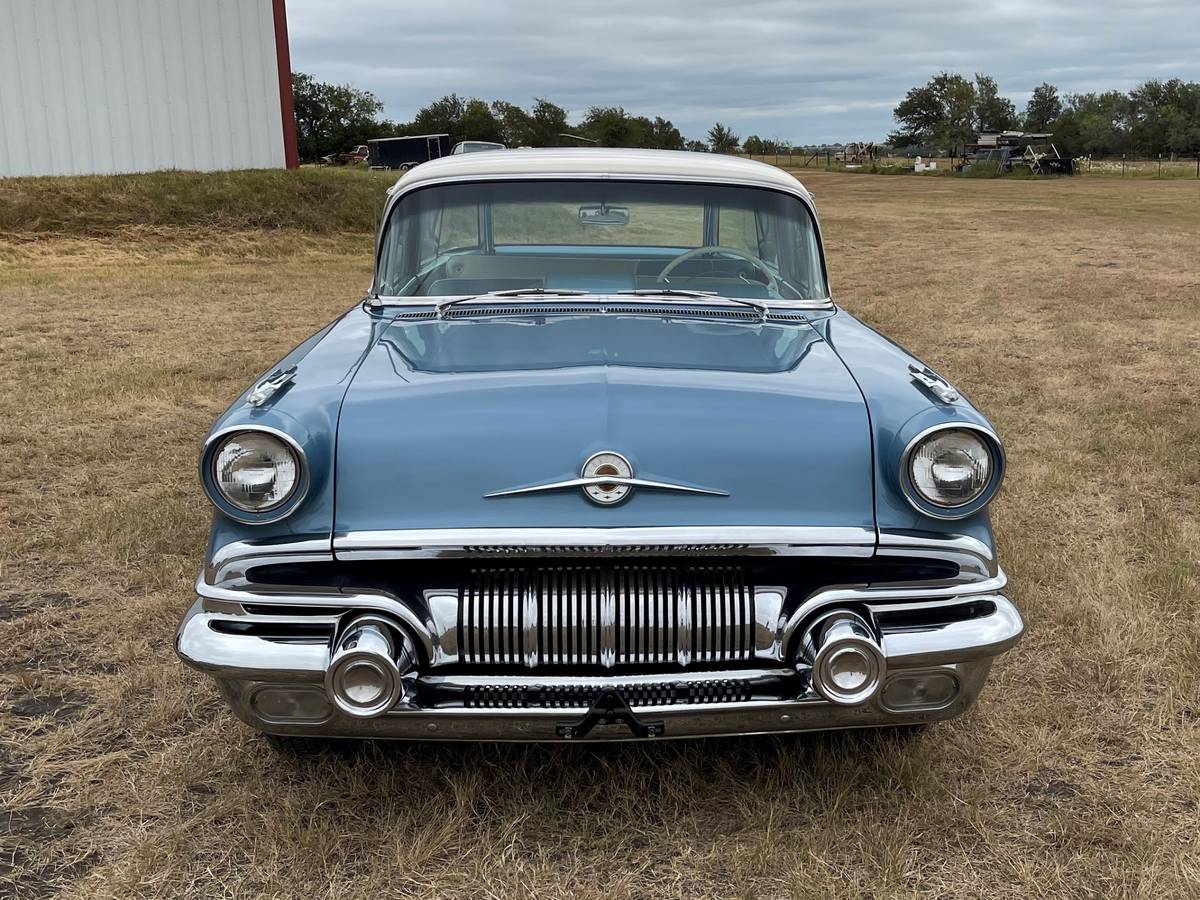 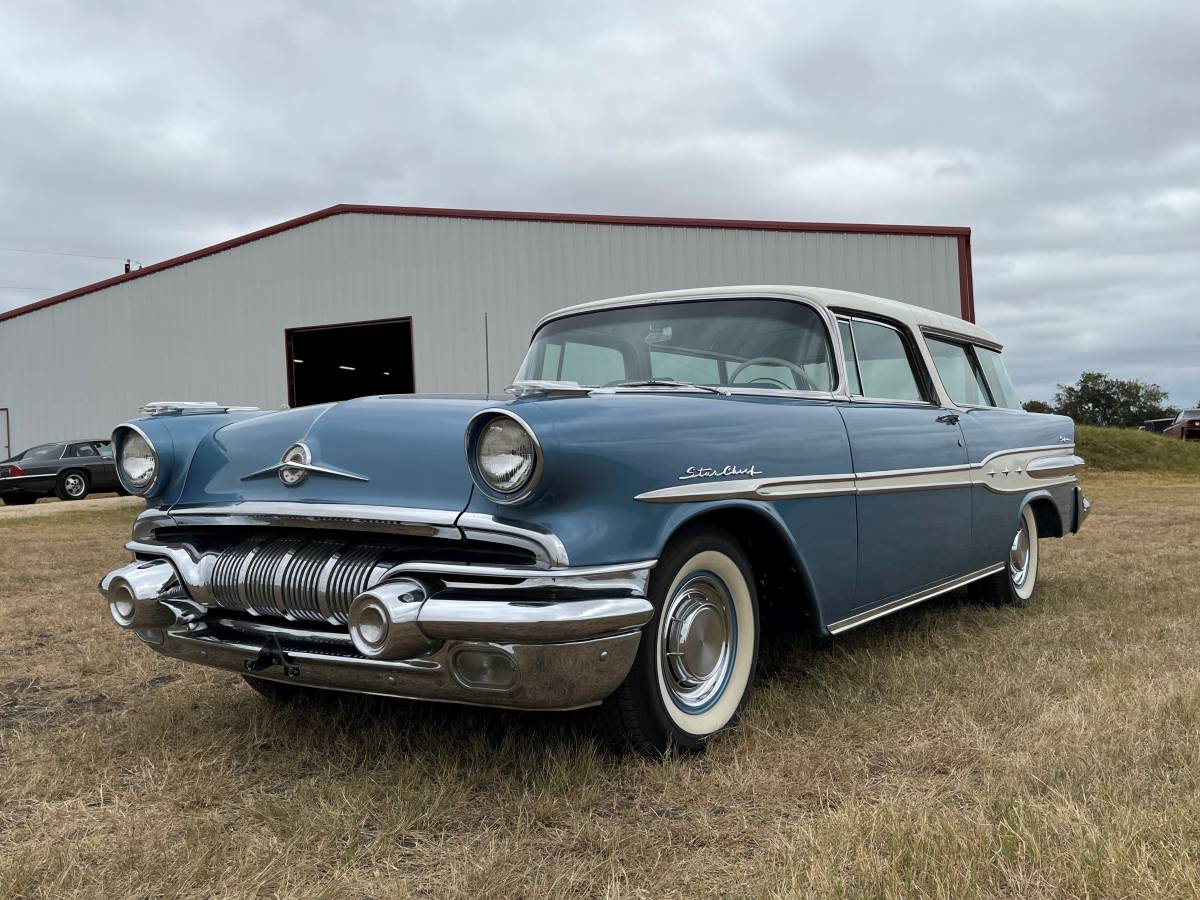 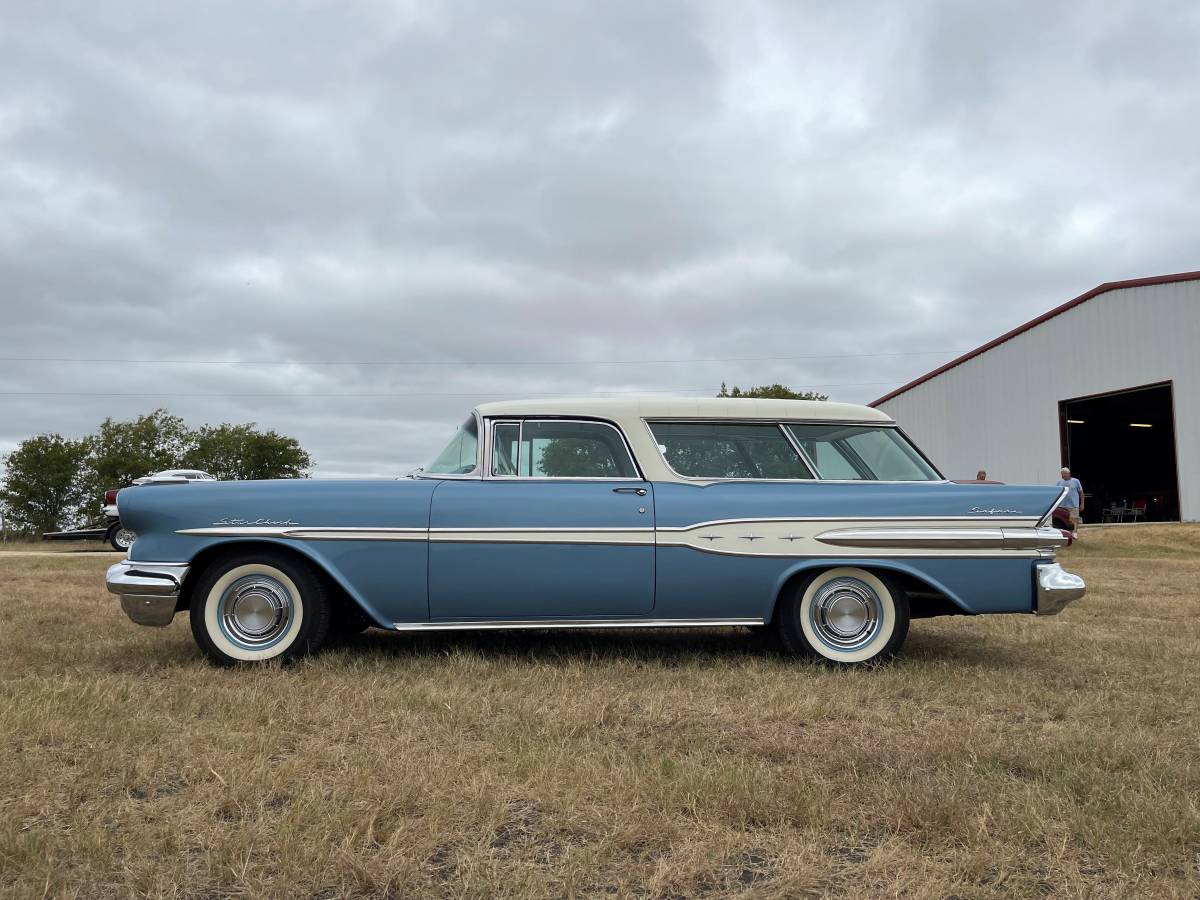 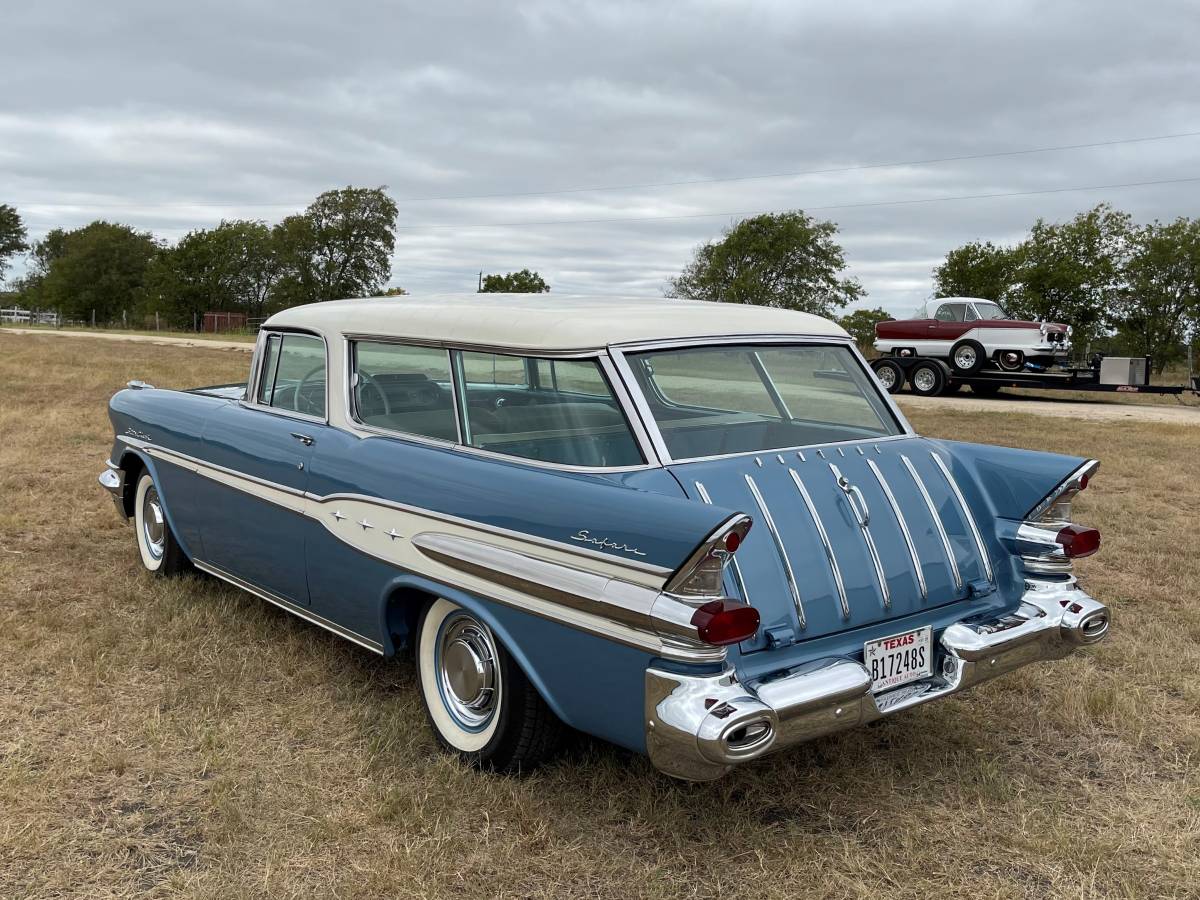 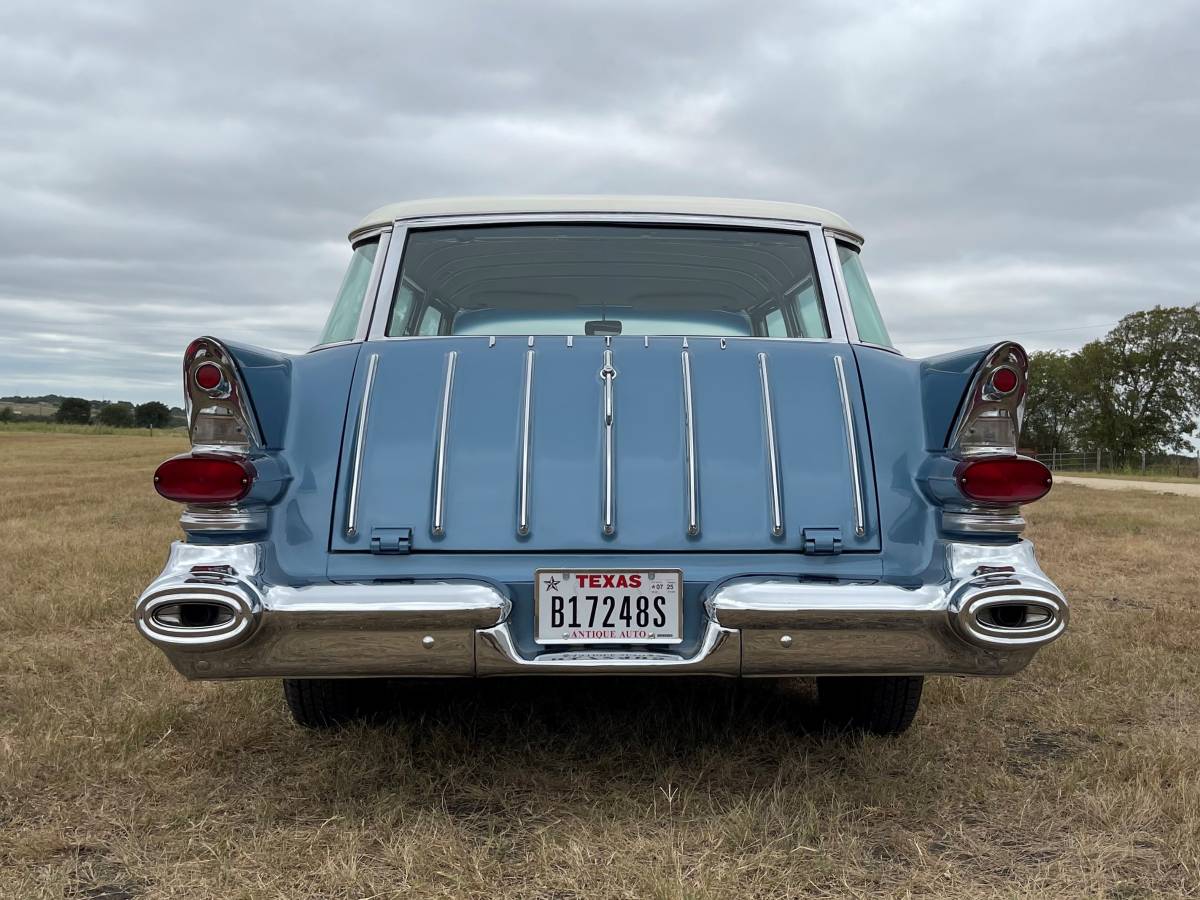 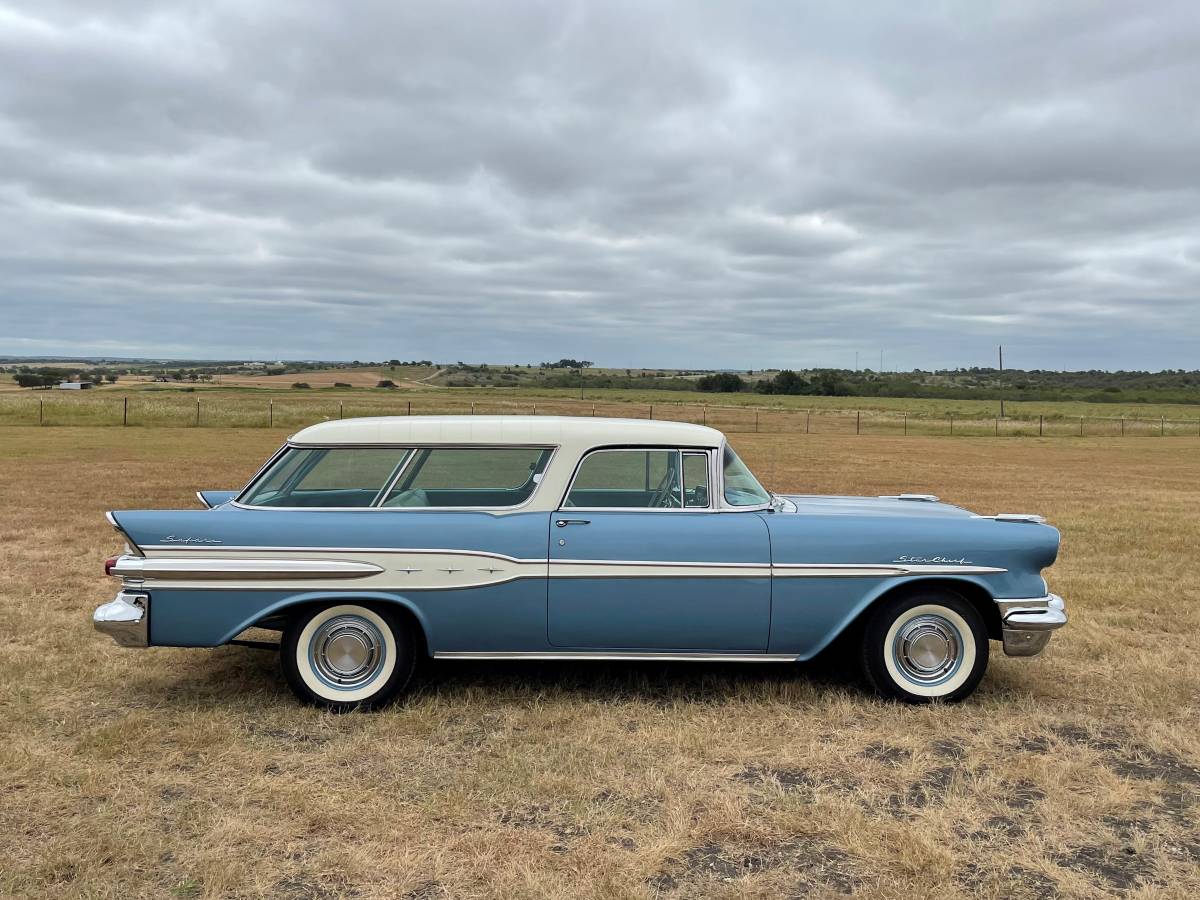 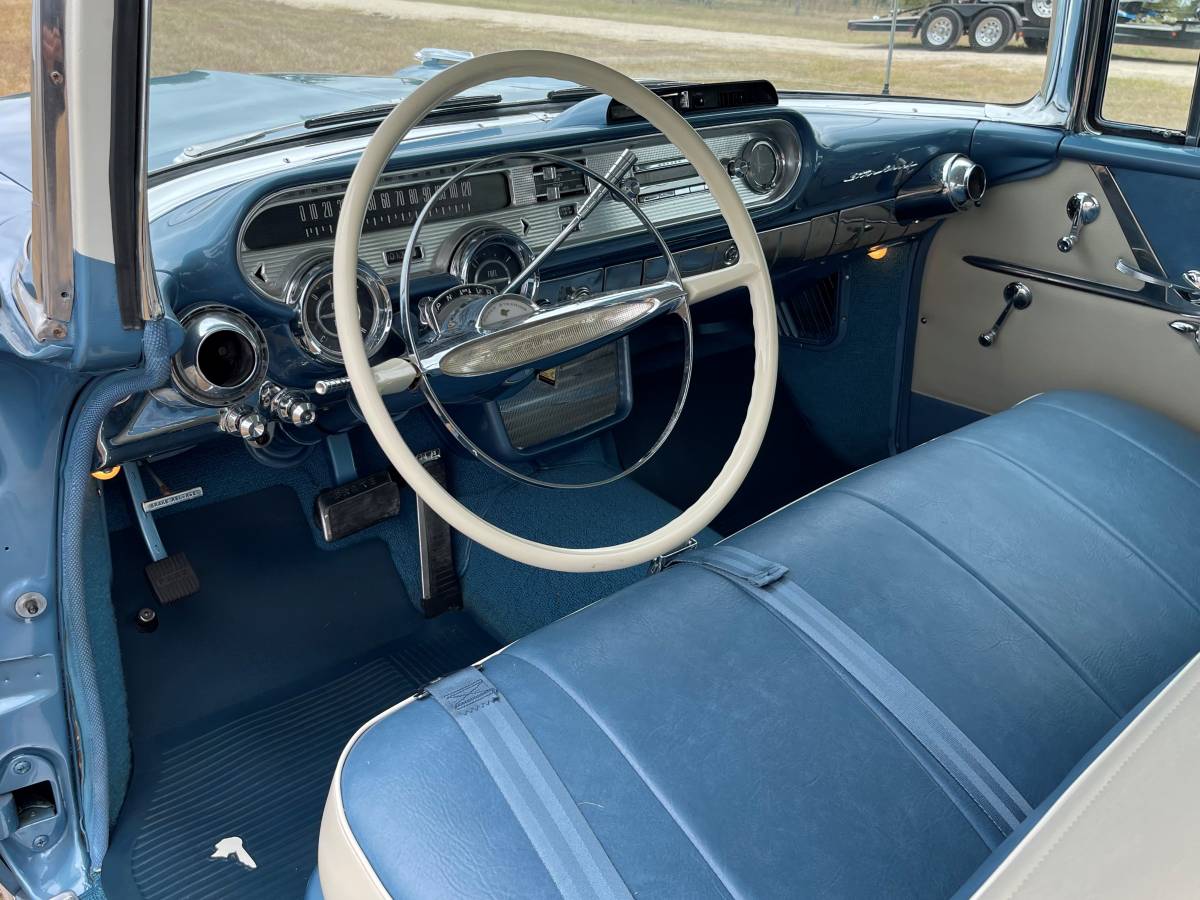 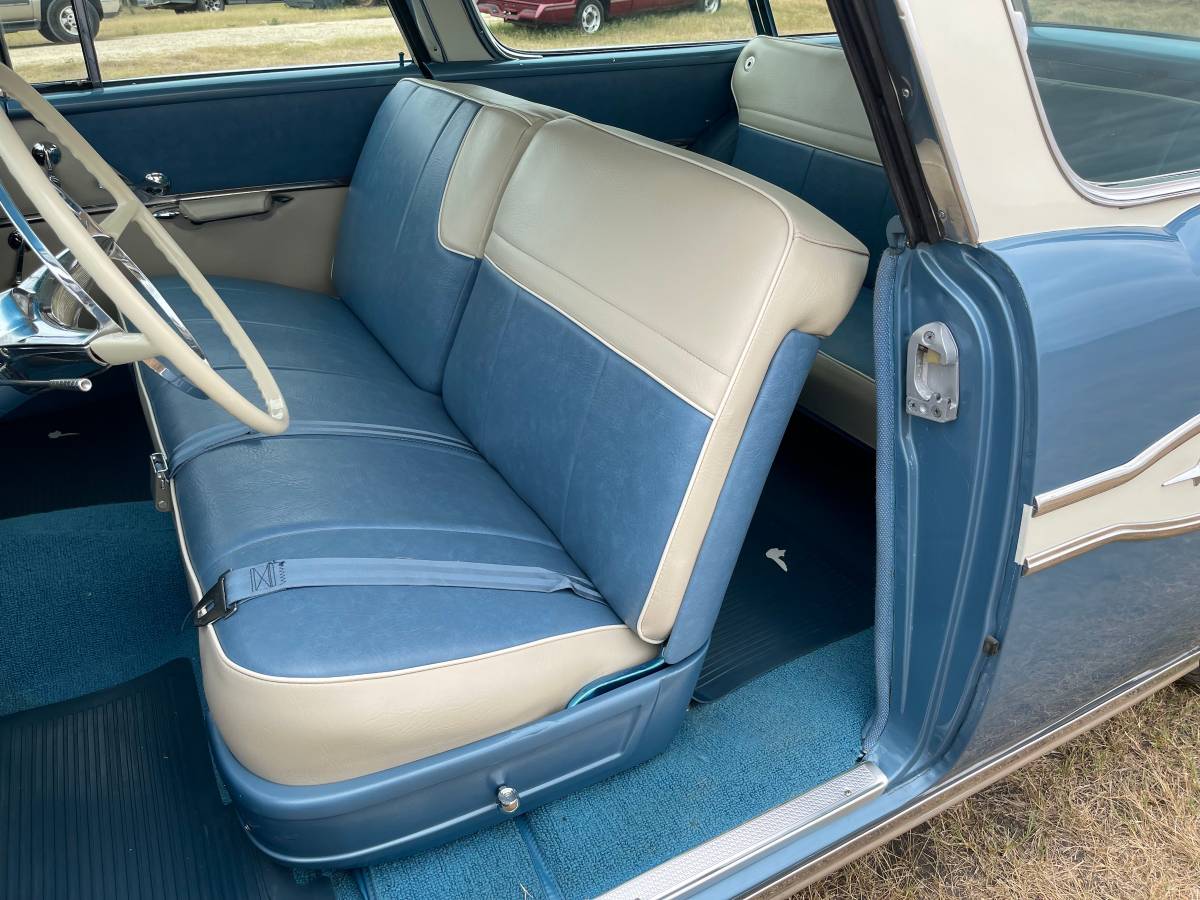 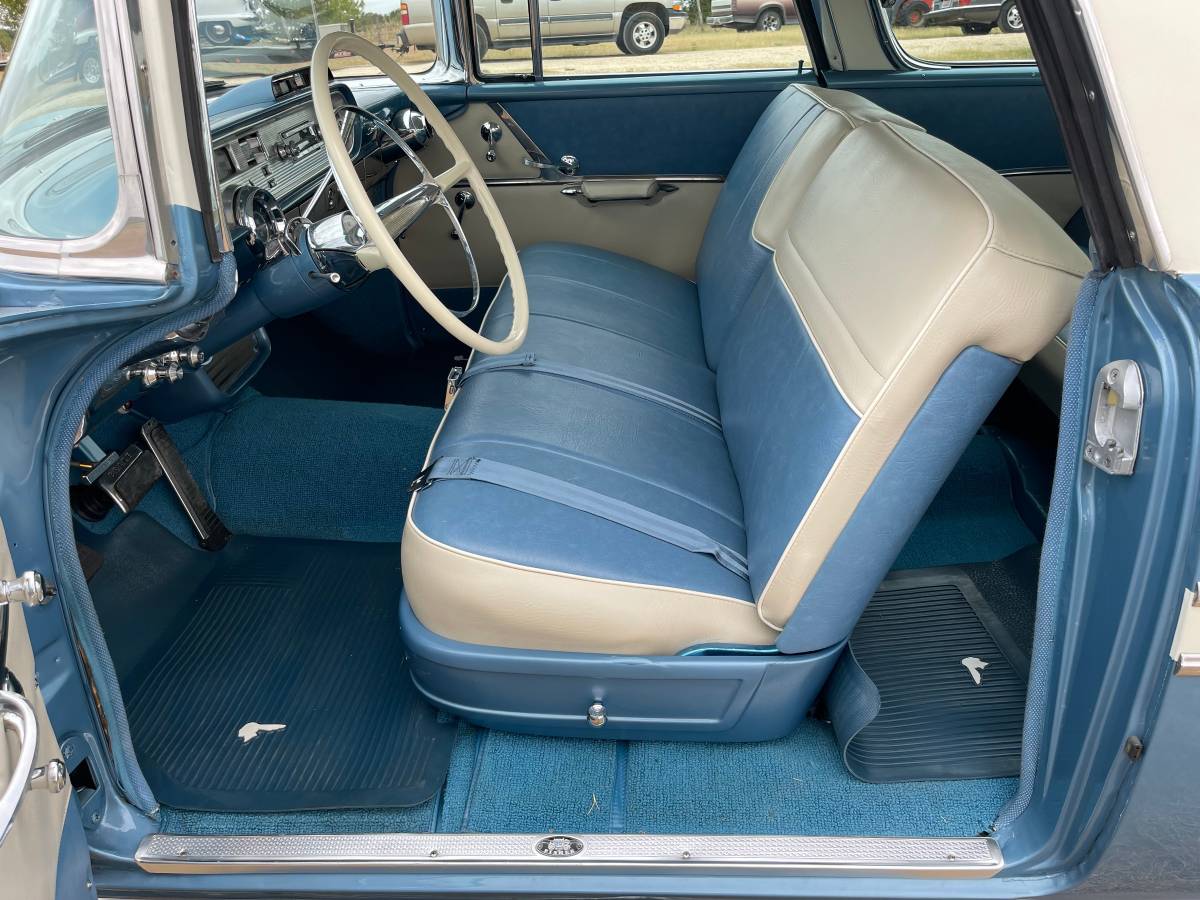 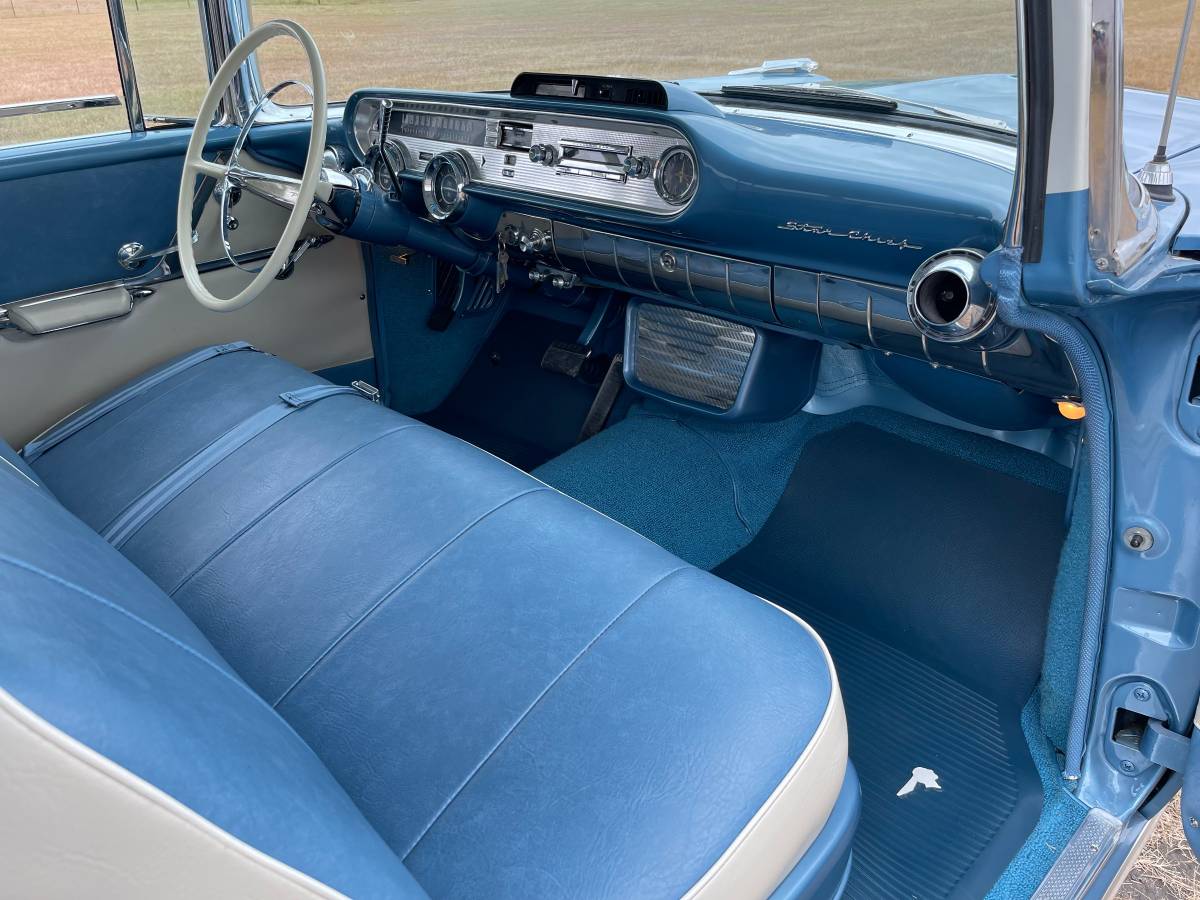 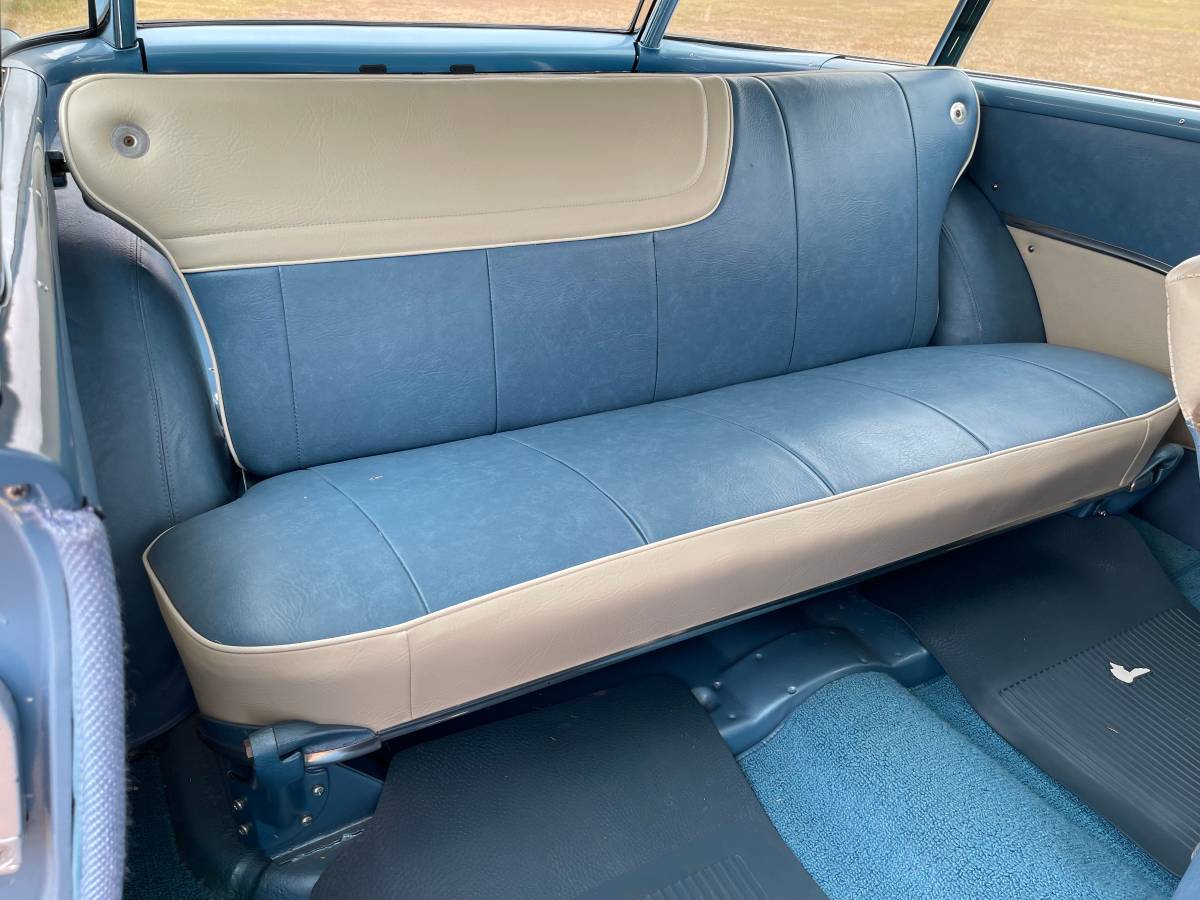 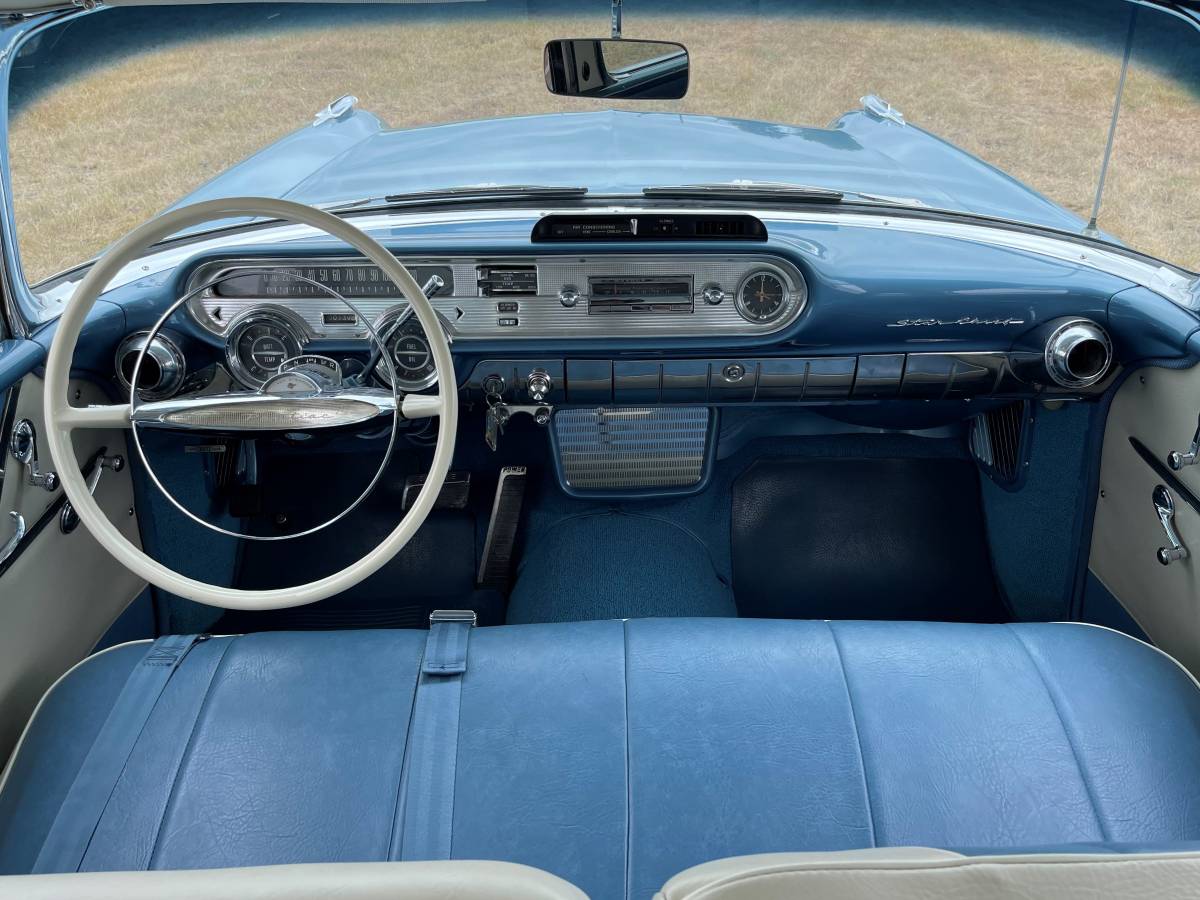 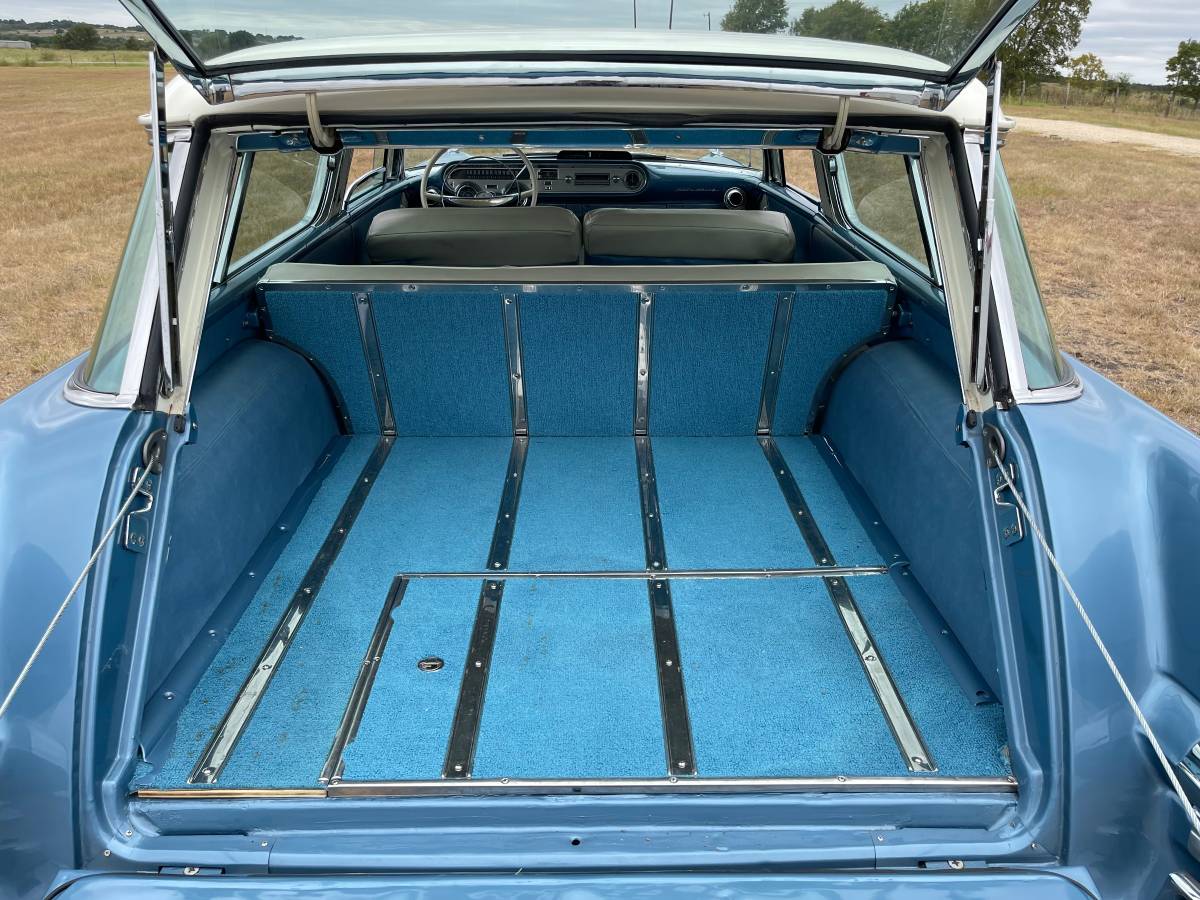 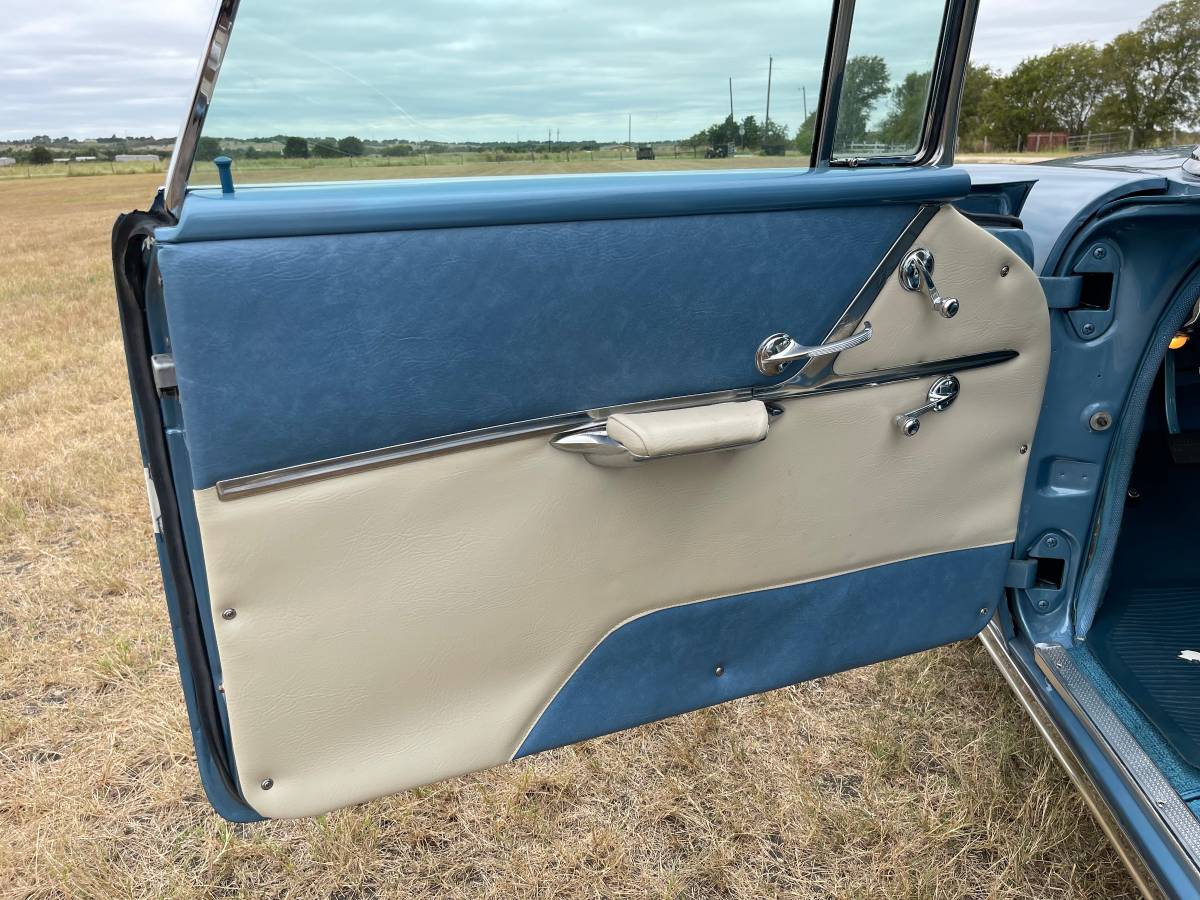 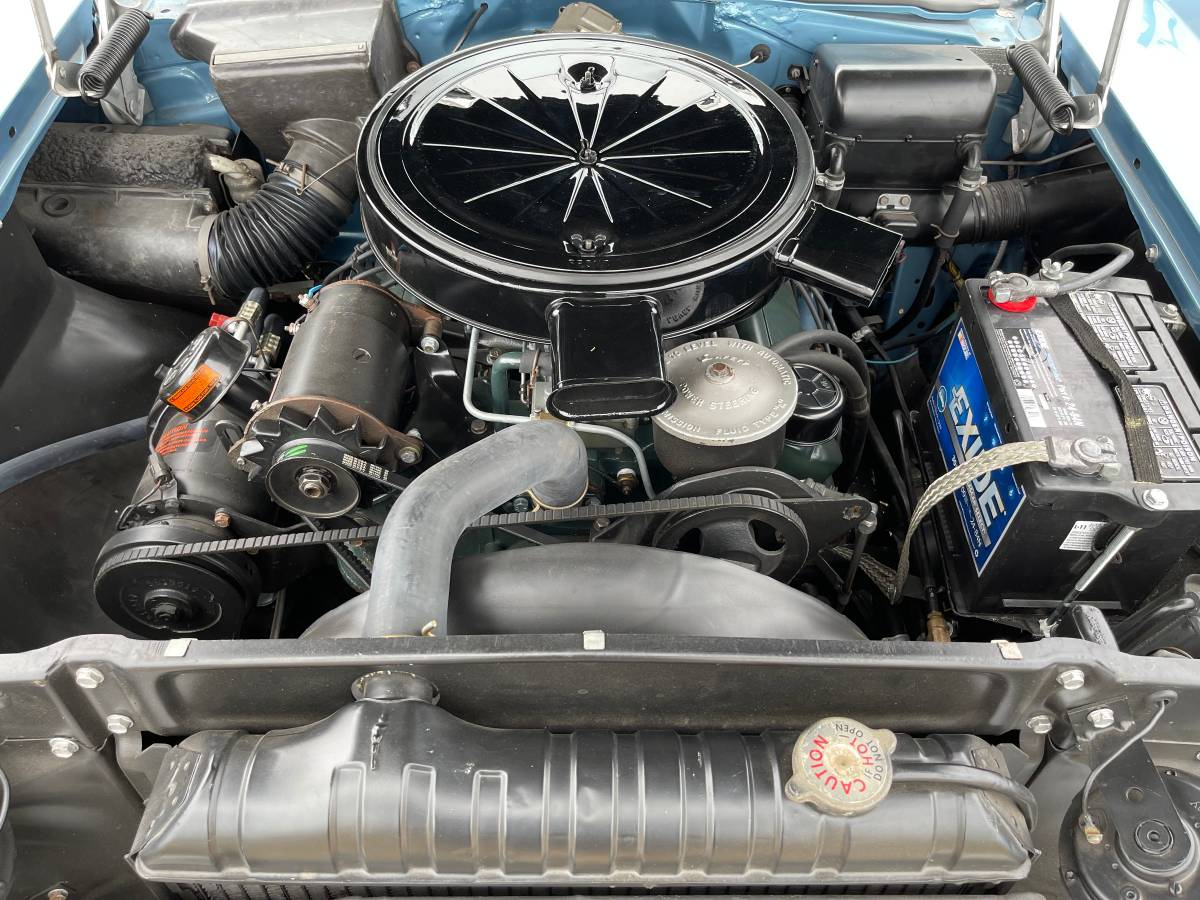 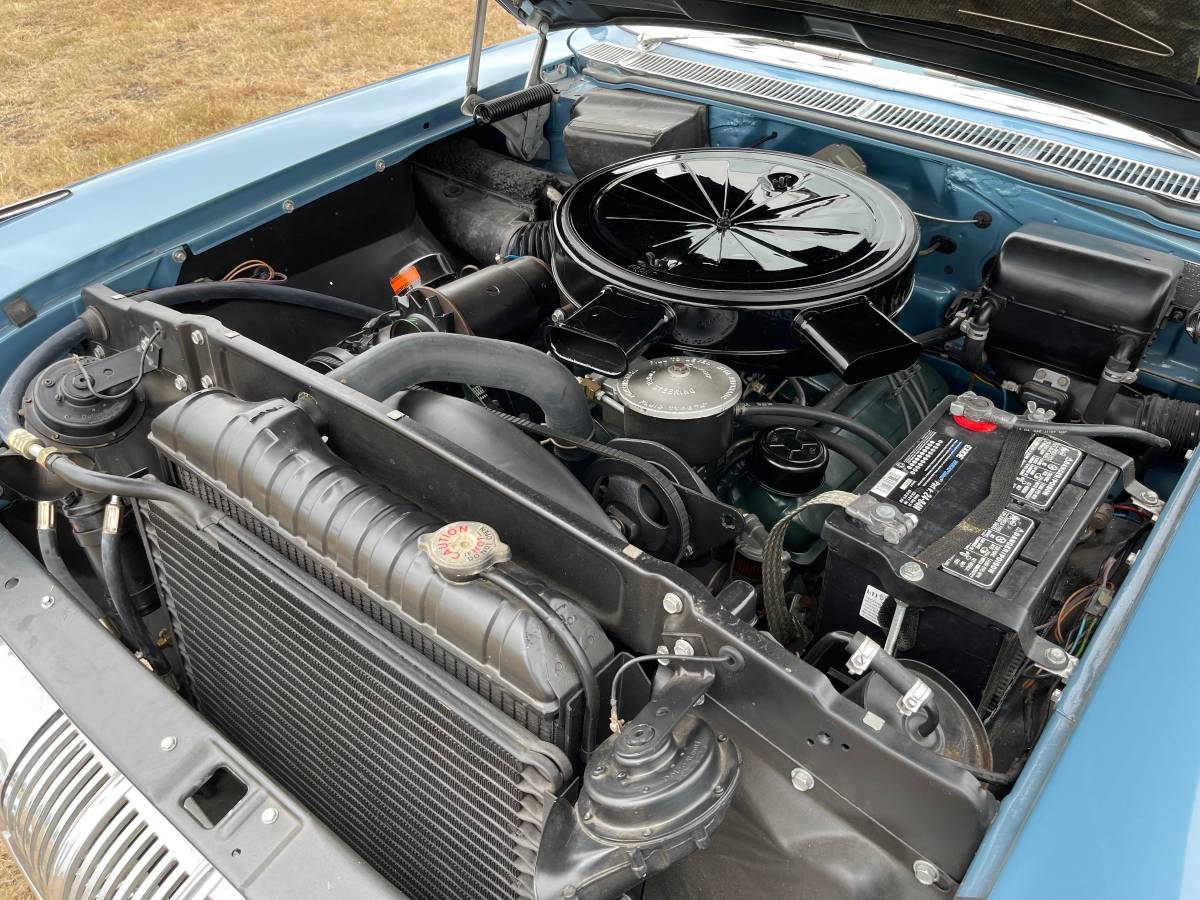 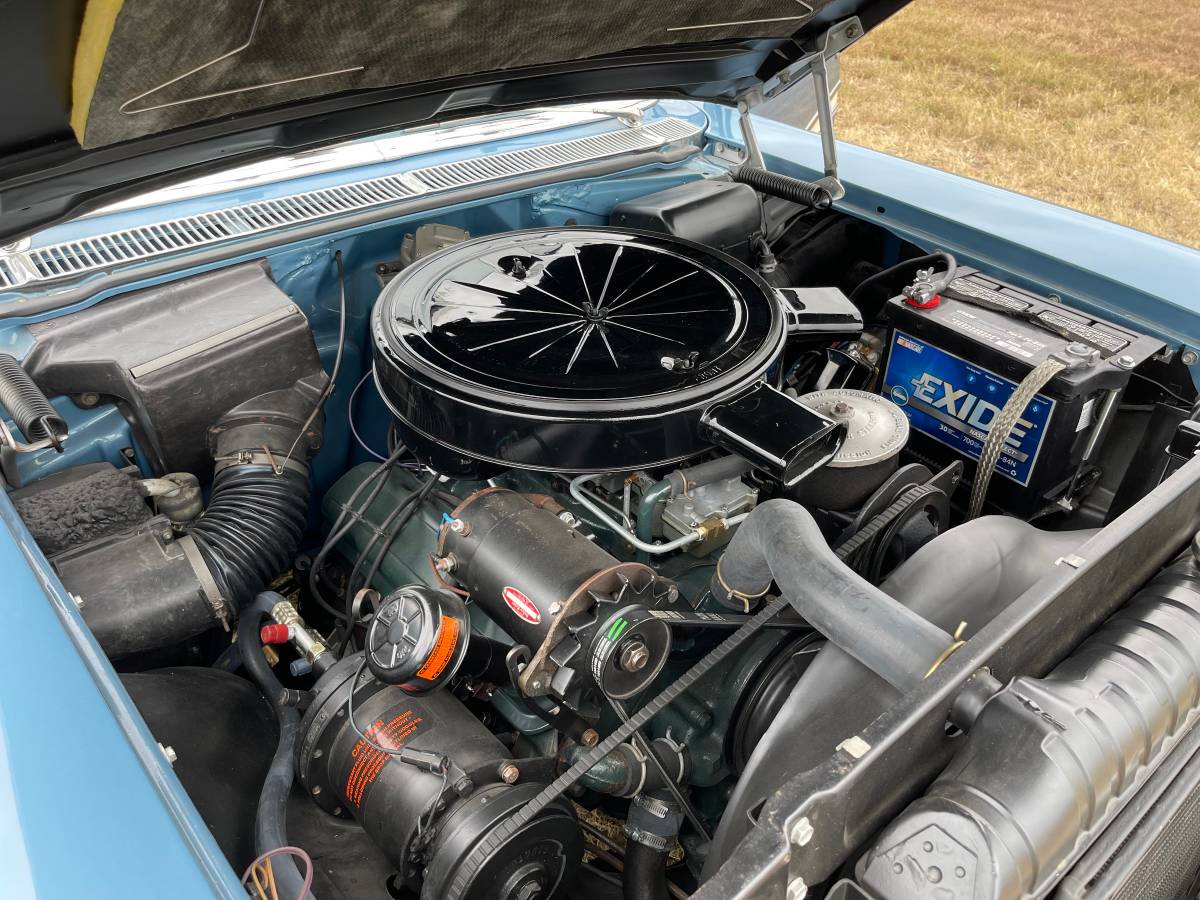 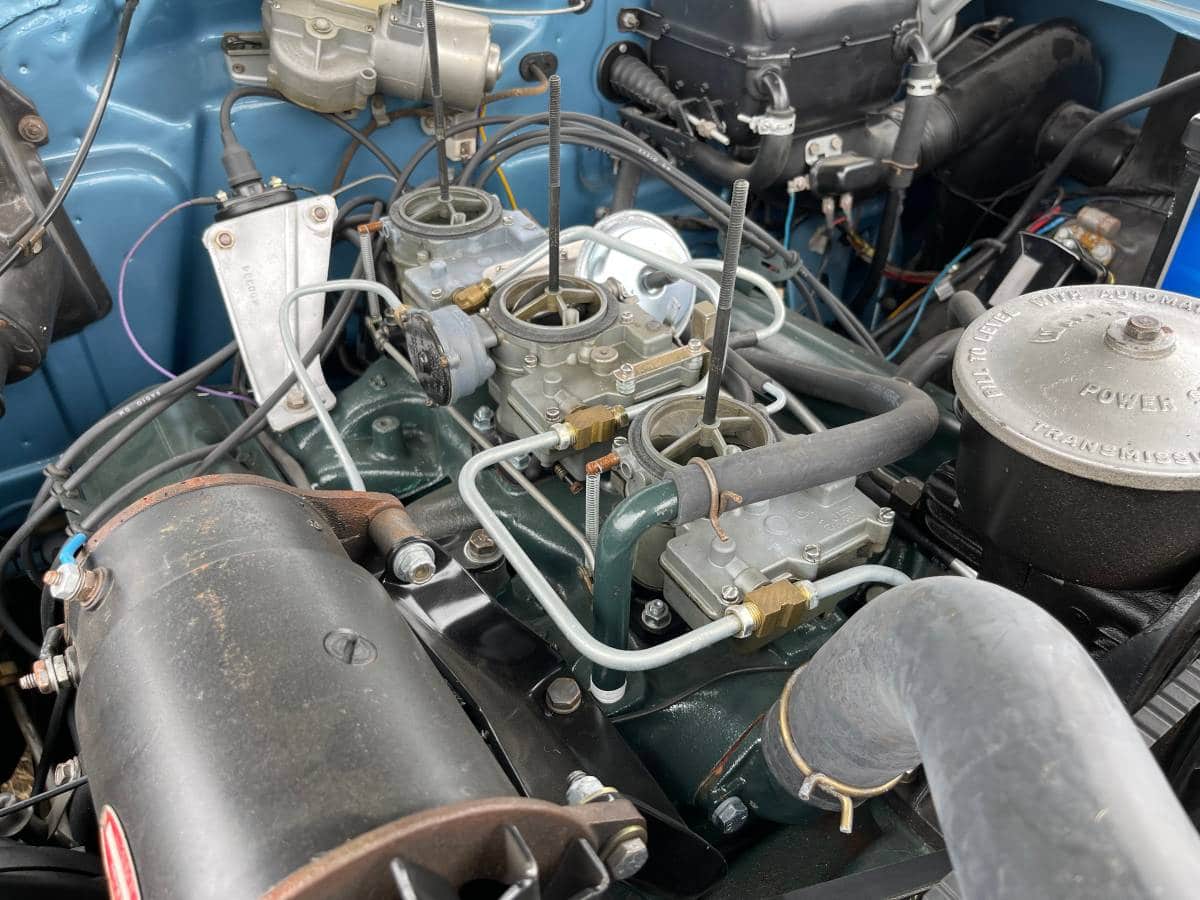 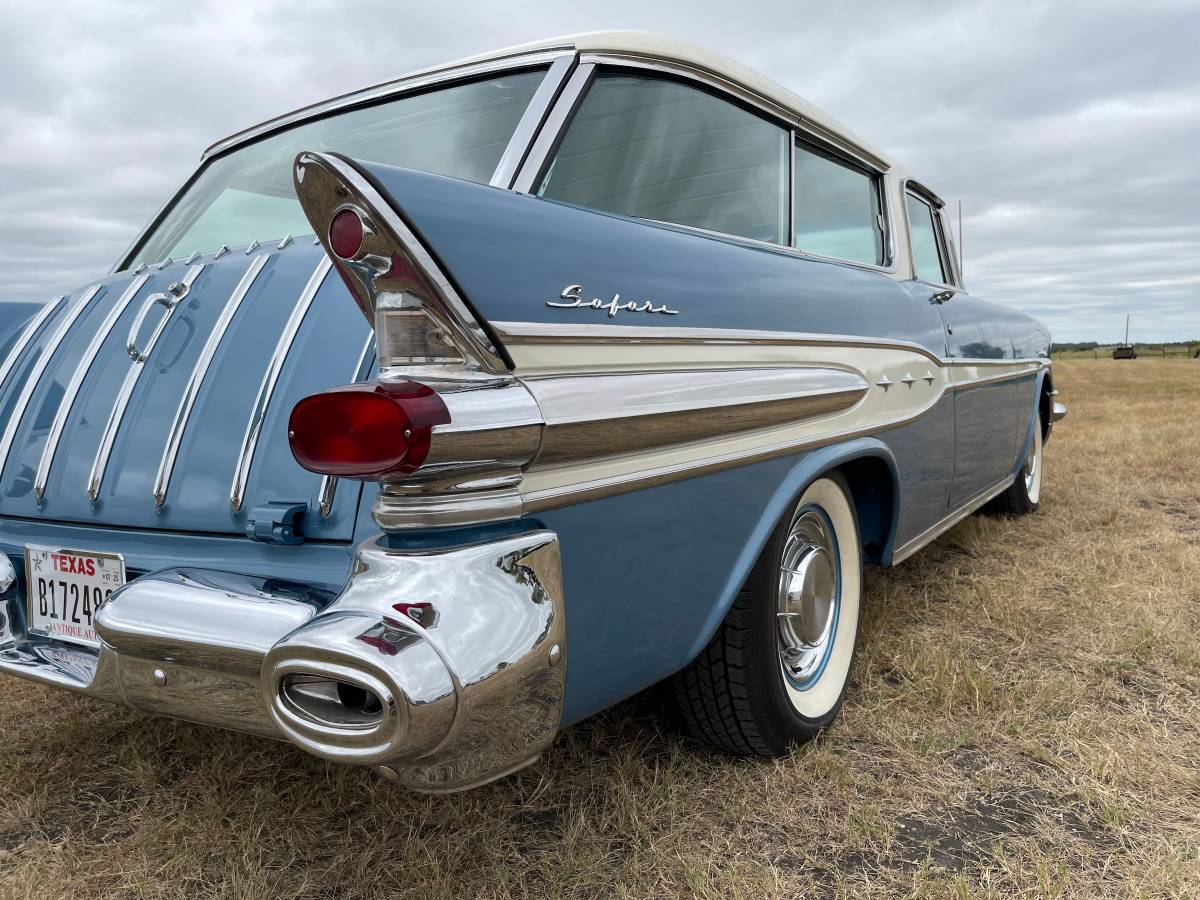 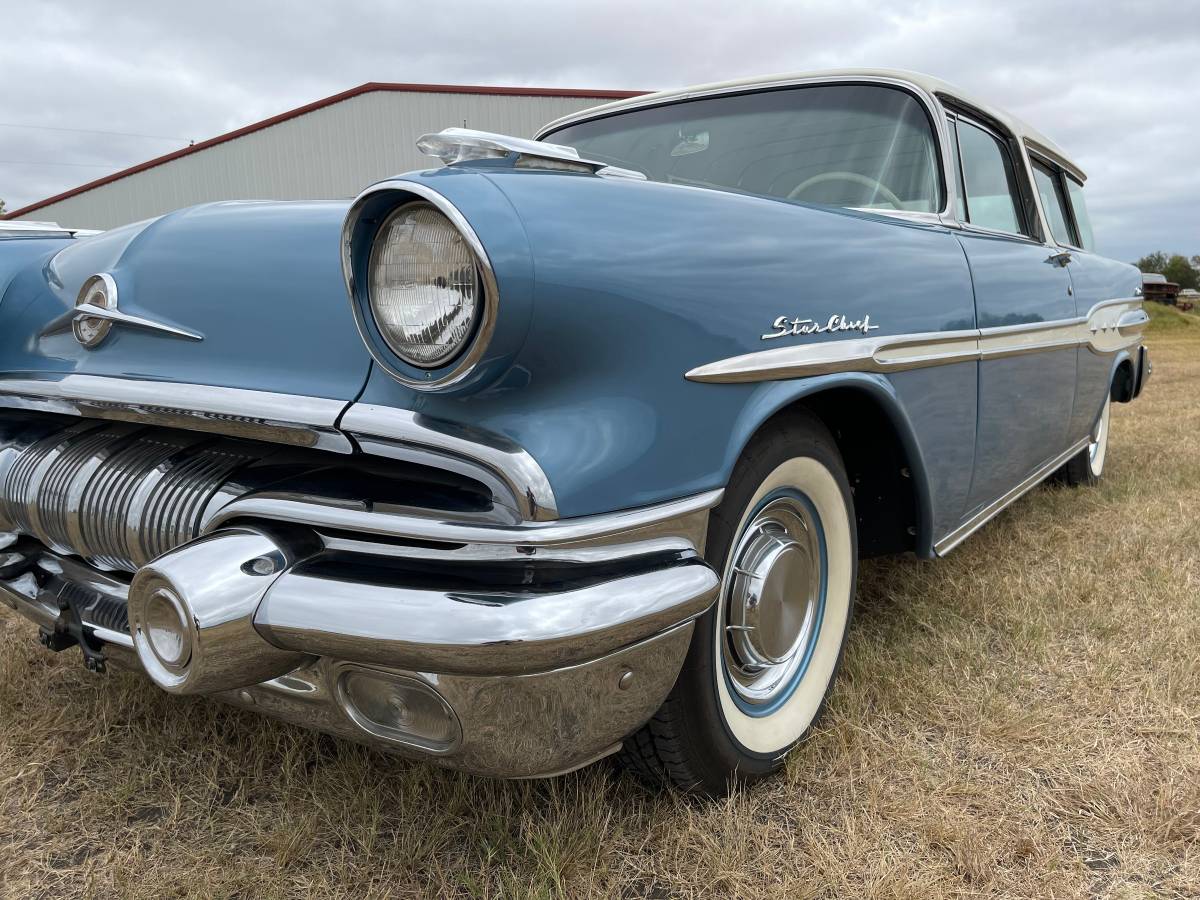 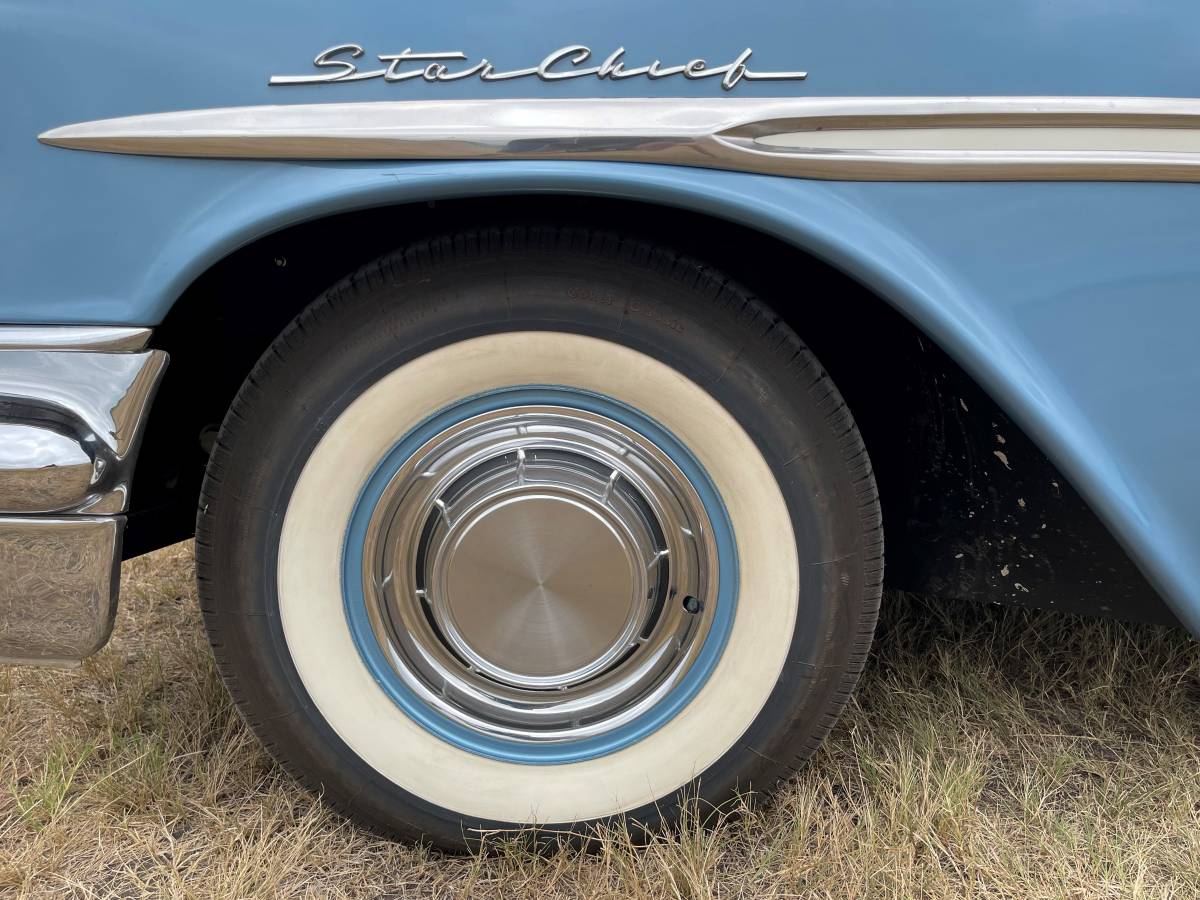 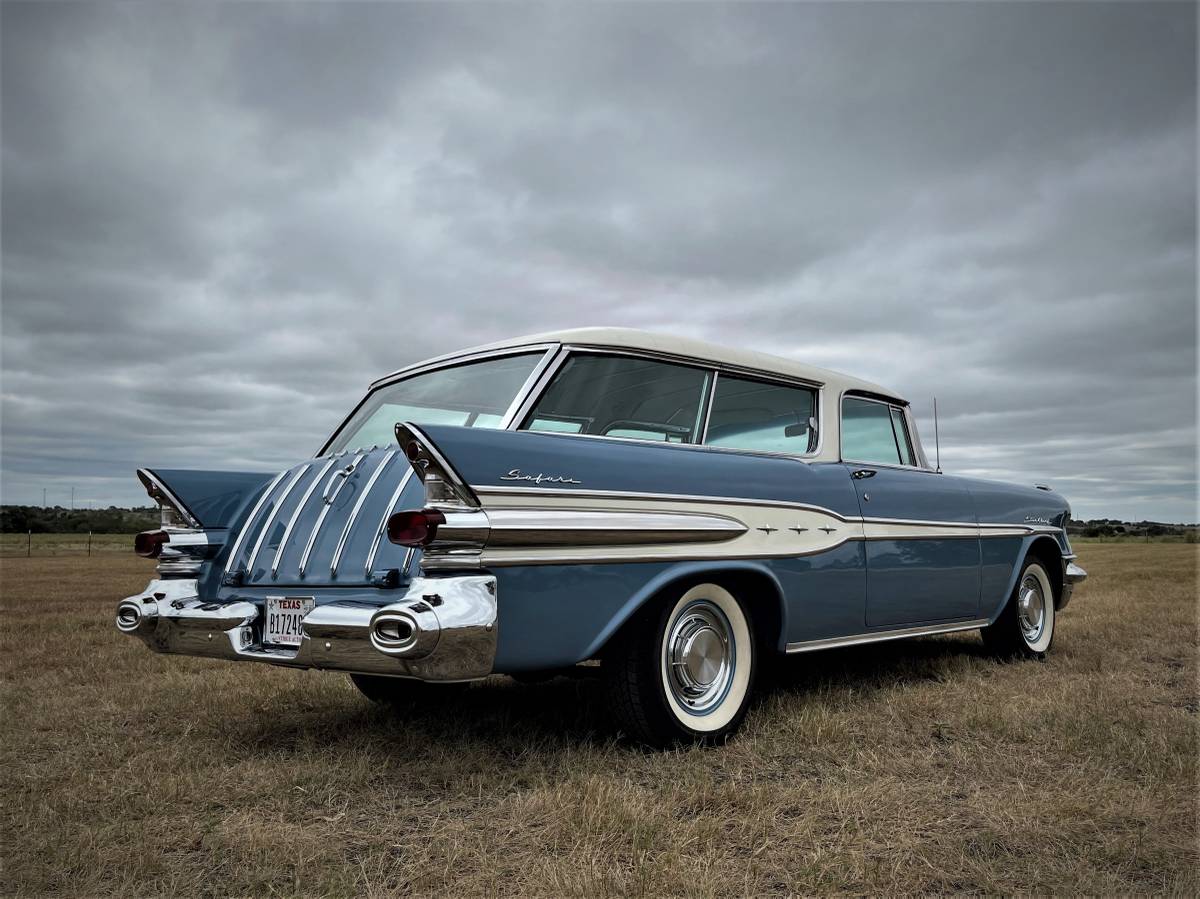 February 2, 2022 Update – The Internet and GuysWithRides.com never forget.  This stunning ’57 Star Chief is now listed here on Hemmings Auctions with the reserve not met with a high bid of $58,750. More disturbing is the fact is the car is unscrupulously listed on Craigslist as a “For Sale By Owner” saying “Selling to the Highest Bidder” when in fact there is a reserve price in place.

January 26, 2022 Update – We just confirmed the listing for this “Classifind” expired, so with no replacement found we’re assuming this ride “Sold?” unless we come across a new listing.

As iconic as the two-door 1955-1957 Chevrolet Nomad station wagon is, we prefer the rarity and upscale look of the badge-engineered Pontiac Safari version.  We just came across what is easily the highest quality, most well-optioned, 1957 Pontiac Star Chief Safari originally listed in December 2021 on Craigslist in Thorndale, Texas (Dallas) we’ve ever seen since founding GuysWithRides.com. In addition to benefitting from a no-expenses-spared, frame-off restoration, this Safari is loaded with options including factory air conditioning and a Tri-power-topped 347 cubic inch V8.

Presented in Concours condition, the current caretaker has their 1957 Pontiac Safari listed for $98,800.  Comparing that price against the Hagerty Insurance Online Valuation Tool confirms the private seller has their Star Cheif priced between this guide’s #2 “Excellent” estimate of $74,700 and its #1 “Concours” appraisal of $108,000 before factoring in a fifteen percent premium for the factory A/C system.  Interestingly, the  Collector Car Market Review Online Tool reveals the seller’s ask is above this guide’s #1 “Excellent” appraisal of $80,700, however that’s before factoring in a fifty-two percent premium for the 317 horsepower Tri-power V8 (40%) and factory A/C (12%).

First introduced in 1954, the Star Chief became the top trim line on Pontiac’s Chieftain line of cars. Pontiac continued the use of the name when it launched a completely redesigned car line for 1955. Not only was the body all-new, but Pontiac introduced its new Strato-Streak V8.  In January 1955, Pontiac launched a badge-engineered version of the Chevrolet Nomad. Known as the Star Chief Safari two-door hardtop wagon, this variant lasted through 1957.  After that, the Safari name was used for all of the division’s standard four-door wagons.

The Safari was not quite part of the Star Chief line, as it sat on the shorter Chieftain 122-inch wheelbase. It was officially part of the “27 series”, whereas the longer Star Chief received the “28 series” designation. In January 1957, sometime after the rest of the new models, the four-door “Custom Safari Transcontinental” station wagon was introduced.

As luck would have it, we came across this walk-around video posted of the exact car featured here that was likely filmed by the same person who took the stunning pictures posted in the car’s listing:

“Pontiac’s Safari line of station wagons were launched in 1955 as two-door Sport Wagons that shared the same platform as the Chevy Nomad and incorporated top-of-the-line Star Chief styling elements. The two-door Safaris were produced for three model years, 1955-1957, limited to the storied Tri-Five era. During its short life, engine displacement grew each production year from 287 to 316 and finally to 347 cubic inch. Total production was less than 10,000 with the big finned ’57 representing a mere 1,292 units.

Finished in Fontaine Blue and Kenya White, this high trim Star Chief is equipped with the rare Tri-Power version of the 347, and was rated at over 315 horsepower. Dressier than the Nomad, this Safari sports power steering, power brakes, factory air conditioning and a WonderBar AM radio. Two-tone blue and white interior matches the exterior with stunning details throughout. The car was the subject of a no expense spared fully documented frame-off, nut and bolt restoration with a commitment to originality.

This car runs and drives flawlessly and everything from the front fender-mounted light adornments to the automatic scanning WonderBar radio is in perfect working order. Included are a pristine set of factory “spinner” hubcaps (not shown), owners manual, tools, spare tire, and a wonderfull set of Pontiac option and color code catalogs that are collectible in their own right.

Safari wagons continued on beyond 1957, but only as four doors. The lower-priced Nomad may be the better known GM Sport Wagon, as they built more than twice as many and became popular among hot rodders who routinely modified their engines, perhaps in an effort to keep up with the likes of Pontiacs Tri Power 347. Aside from greater performance, what the Safari Star Chief offered that a Nomad did not have was a higher level of luxury, creature comforts, and exclusivity.

This Safari Sport Wagon is located in Thorndale, Texas, and is offered as is where is. This is a near Concours level example, shown by appointment only. Low ballers, scammers, and sales assistants need not apply. More pics and restoration details are available upon request. Trades considered; no bikes, boats, or planes please. Call, text, or reply.“

Show or go: what would you do with this restored 1957 Pontiac Star Chief Safari?  Comment below and let us know! 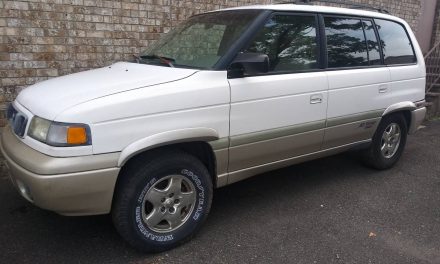 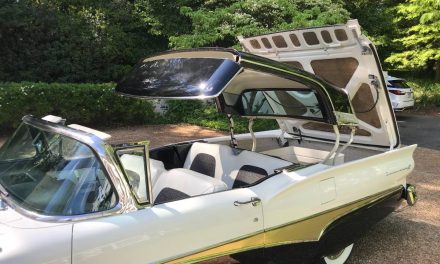 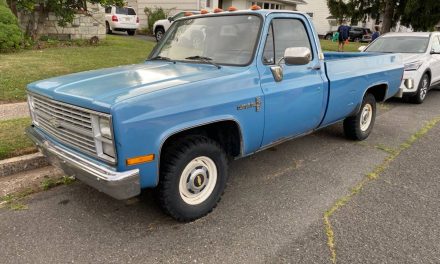 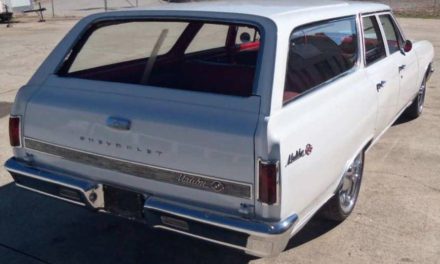