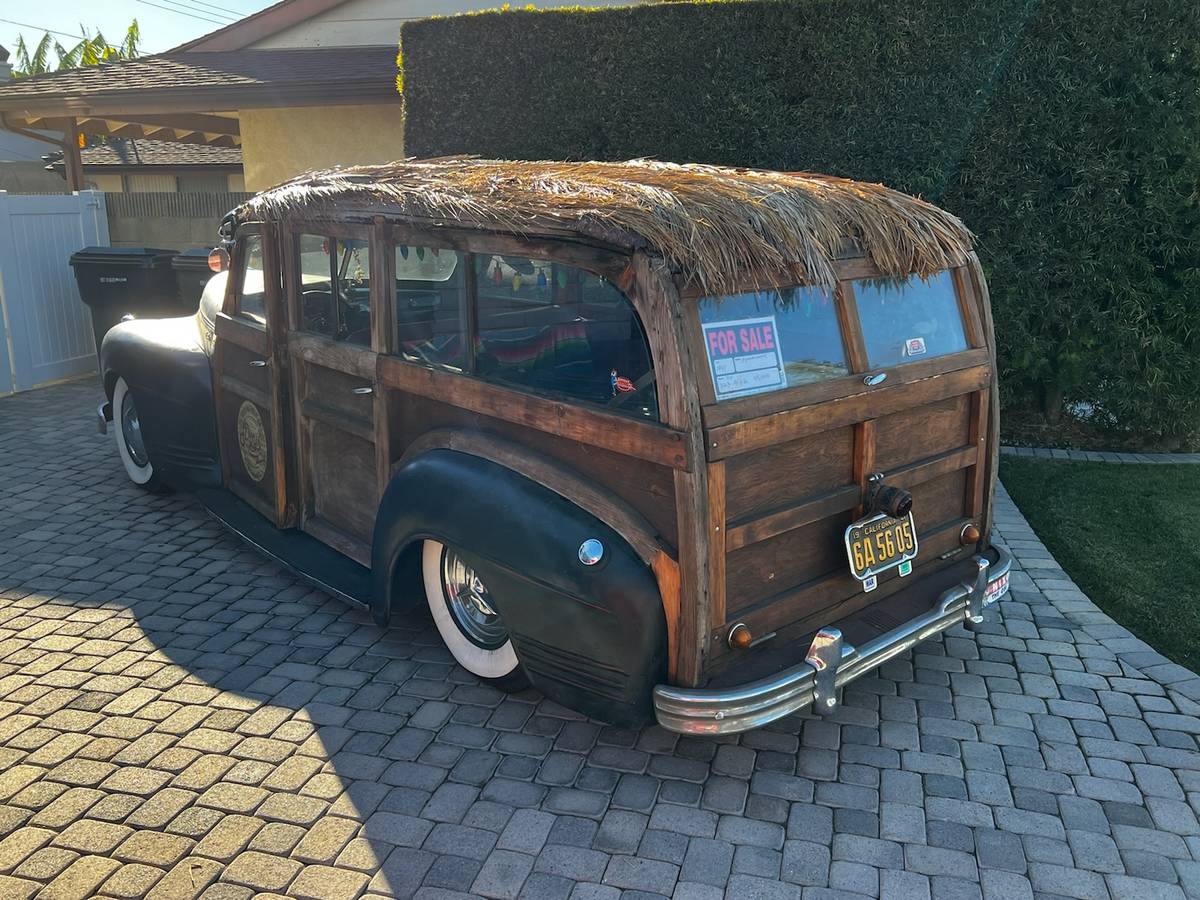 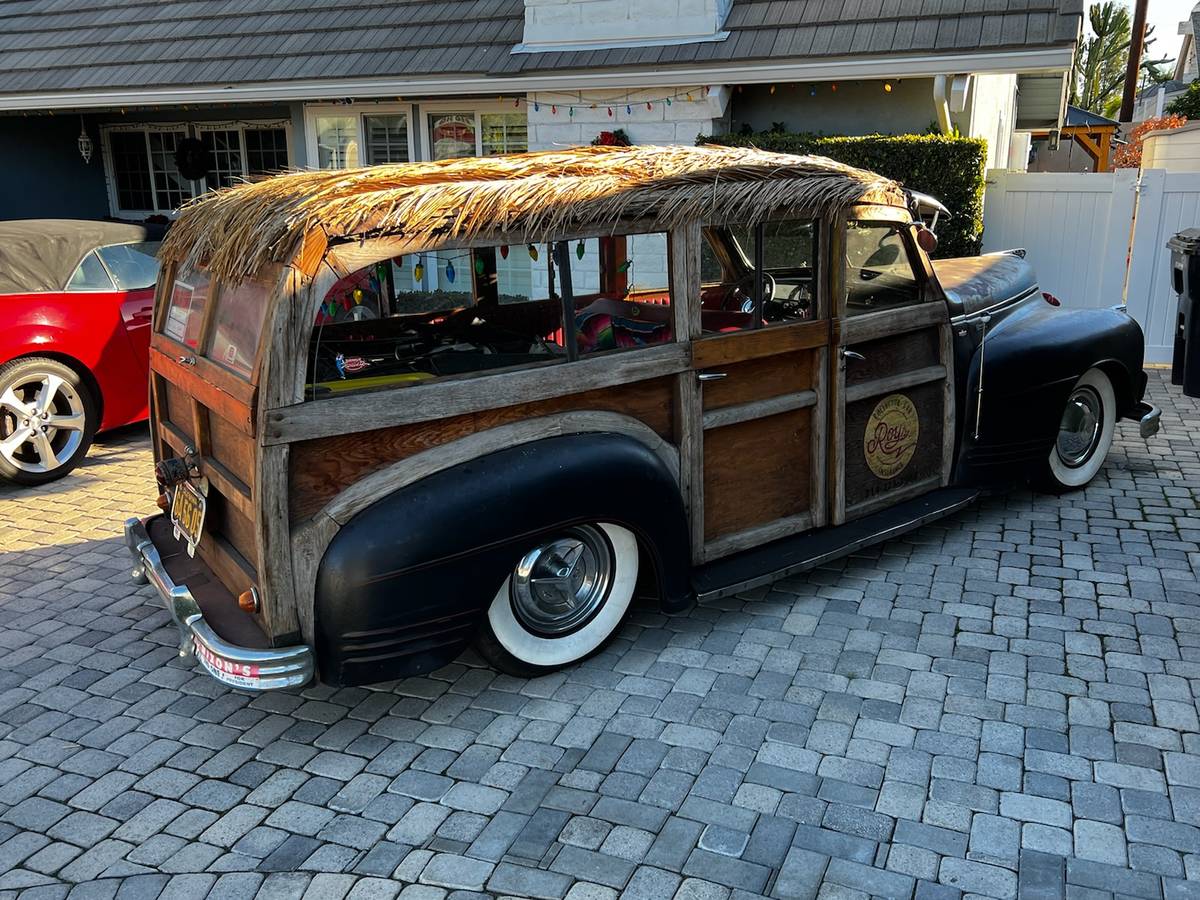 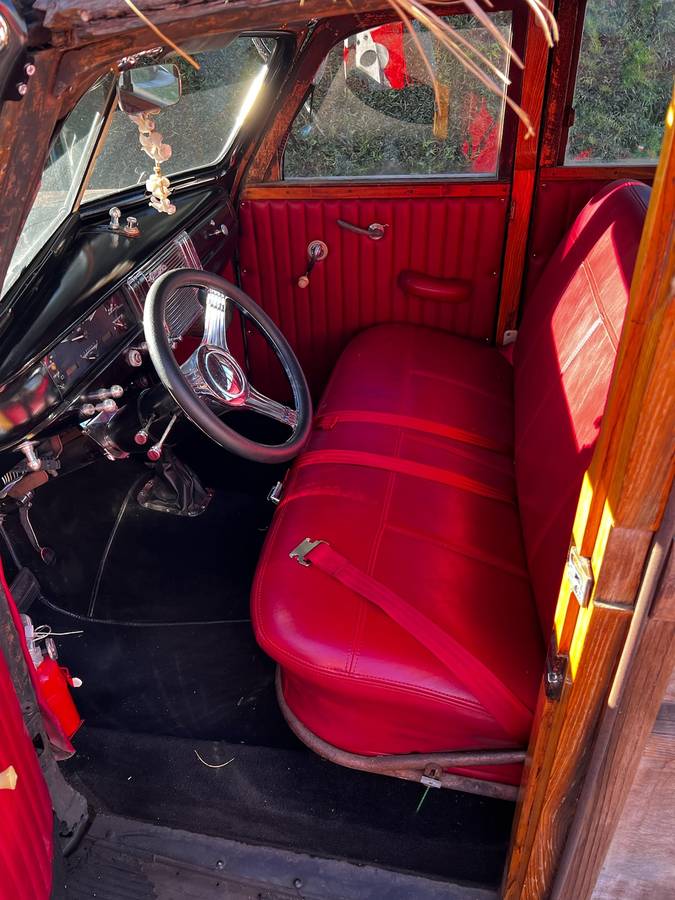 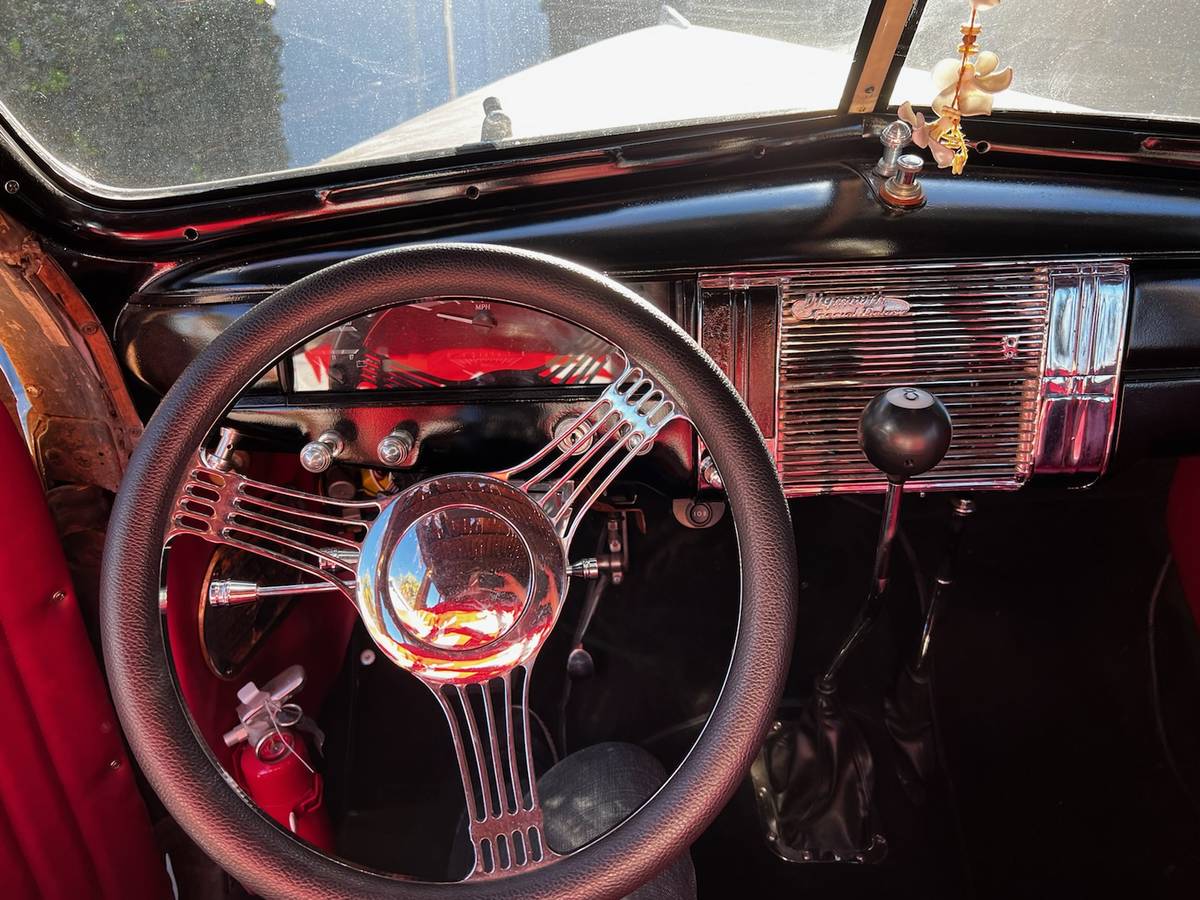 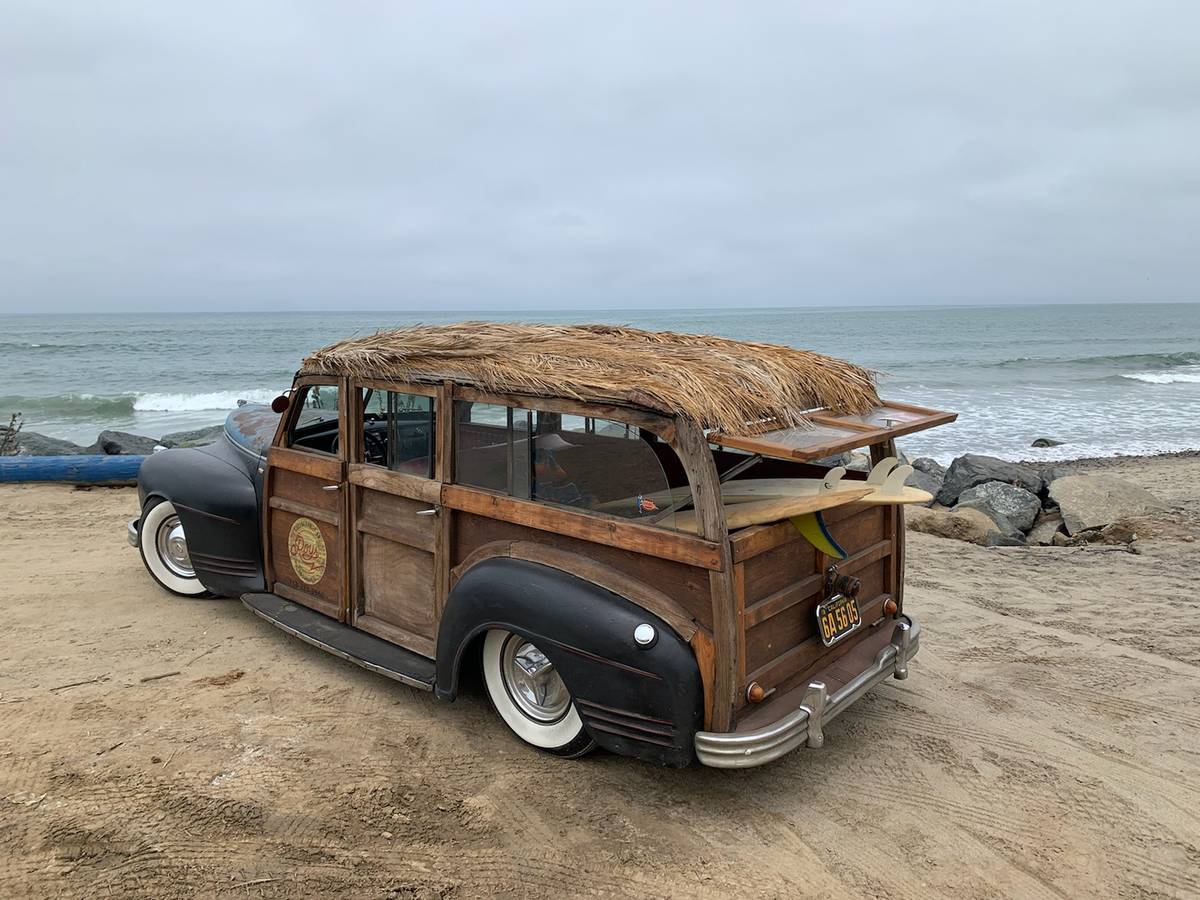 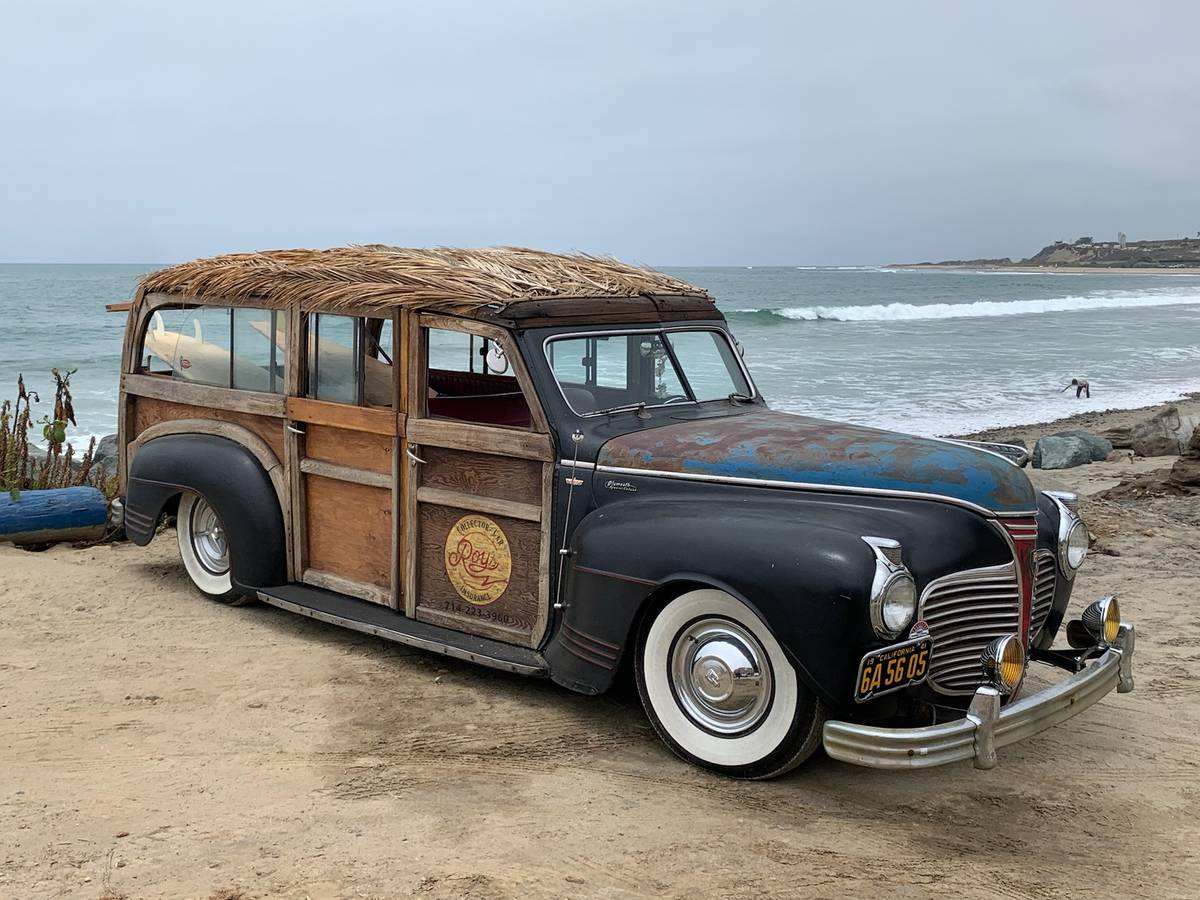 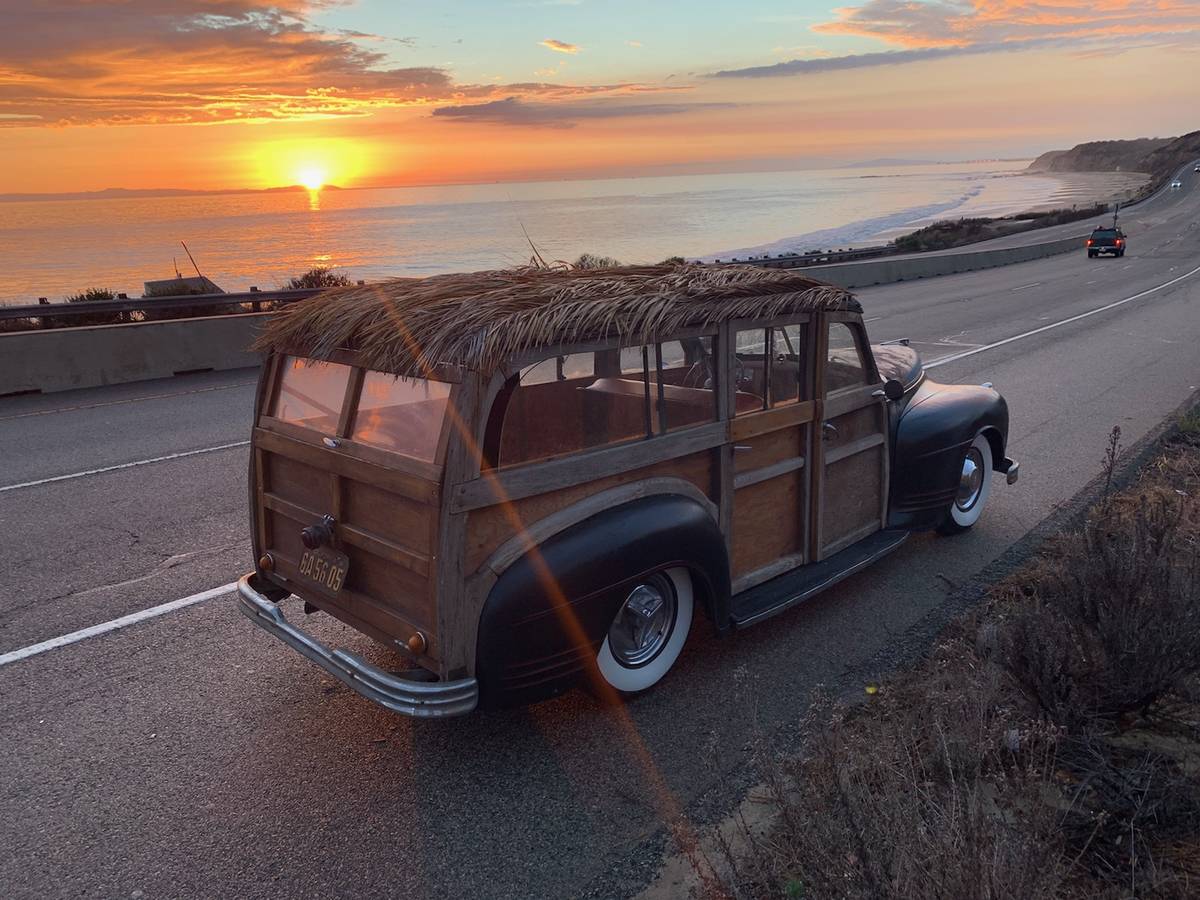 March 2, 2022 Update – We just confirmed the listing for this “Classifind” expired, so with no replacement found we’re assuming this ride “Sold?” While this one got away, please reach out either by email or call us directly if you’d like to be informed when we come across something similar.

New rule: if you’re going to try to sell a restomod, it would help if you listed the power train more specifically than “The chassis and drivetrain are from a modern car” and keep the bikini and tattoo-clad model out of the otherwise nice exterior pictures. Neither are helping sell this 1941 Plymouth P12 Special Deluxe Woodie Wagon originally listed in January 2022 on Craigslist in Placentia, California (Orange County). The chassis and drivetrain speak volumes about the quality of the build. We’ll be more impressed to learn the builder kept this vintage Plymouth all Mopar rather than the more ubiquitous small block Chevy route. Decorum stopped us from including the shots with the bikini model, so you’ll need to click the actual link to see those pictures.

Currently offered for $50,000, comparing that price against the Hagerty Insurance Online Valuation Tool confirms the private seller has their 1941 Plymouth Special Deluxe Woodie Wagon priced between this guide’s #3 “Good” estimate of $44,000 and its #2 “Excellent” appraisal of $67,700 for a stock restored example.

“At the start of 1941 demand for new vehicles remained steady and industry was booming but by the end of the year the U.S. was gearing up for war. Overall auto production rose only 1.65 percent over 1940 and Chrysler sales declined 6.6 percent from the previous year. Plymouth sales dropped 15.7 percent to 546,811 units, but the division retained its number three slot in the market. Dodge dropped 4.5 percent but stayed in seventh place and Chrysler rose 22 percent to take eighth place from Studebaker. DeSoto gained 2.6 percent and stayed in the 10th spot.

Tagged “The One for ‘41” all 1941 Plymouths received a new grille under a one-piece alligator hood, hinged at the rear. The grille was vertically divided into two panels with horizontal bars, with a chrome surround. Front and rear fenders gained three pressed ribs on their trailing edges. The battery moved from under the seat to the engine compartment. The trunk now had spring-loaded hinges and the stoplight was mounted high on the trunk lid, along with the license plate. Front park lights were raised above the headlight and (except for early cars) were designed to be visible from the side.

The 87-hp, 201.3 cubic-inch six-cylinder engine was unchanged, but an optional 7.25:1 compression ratio bumped power to 92hp. A “Powermatic” vacuum gear shift was offered. Base wheelbase was 117 inches, long-wheelbase models were 137.5 inches. The wheels and tires were 6 x 16 inches. Oversize wheels for Sedans were reduced to 18 inches.

The base model was the 1941 Plymouth P11 – the Roadking name was dropped. It could be recognized by the lack of brightwork around the windshield, a single wiper, and a driver’s side visor. Front vent windows were optional but lacked any bright work. Seven Plymouth P11 models were offered, plus a bare chassis.

The 1941 Plymouth Deluxe P11D wasn’t considered a separate model, but merely a P11 with some extra brightwork and a few more available options. Examples can be recognized by chrome trim around the windshield and side windows, and the word Deluxe on the hood side panels. In all, six P11 Deluxe body styles were offered.

The most notable aspect of the 1941 Plymouth P12 Special Deluxe was the availability of 2-tone paint and upholstery. Two-tones finishes also included the Westchester Station Wagon, whose recessed panels could be stained a dark mahogany color if preferred. Special Deluxe models were often fitted with “winged” bumper ends and a central grille guard. A rearguard could be fitted that swiveled downwards so that the trunk could open. Running boards could be replaced with a chrome strip. Rear fender skirts were increasingly common. Nine total body styles were available in the P12 Special Deluxe lineup.”

Unfortunately, getting great pictures of the bikini model next to the car left no time to get pictures of the interior and the engine. Consequently, you’ll need to ask the seller many questions to learn more.

“1941 Plymouth Woodie custom, a true 60’s surf wagon. This car has been featured in many hot rod magazines, it is truly a one of a kind. The chassis and drivetrain are from a modern car. This is a recent build, built by a famous custom car builder. This car runs on smiles and draws a crowd wherever you take it. More pictures are available by request.“

Surf or Show: what would you do with this 1941 Plymouth P12 Special Deluxe Restomod?  Comment below and let us know!