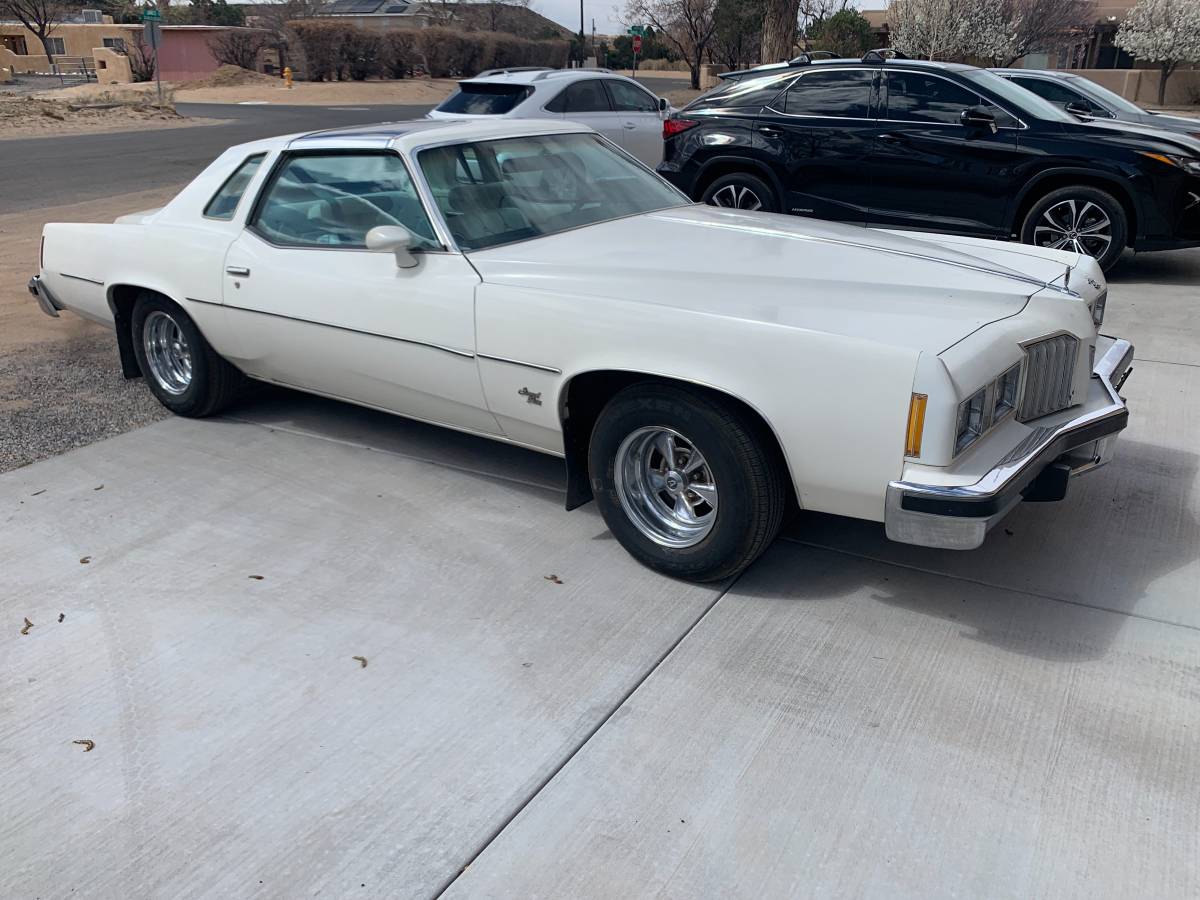 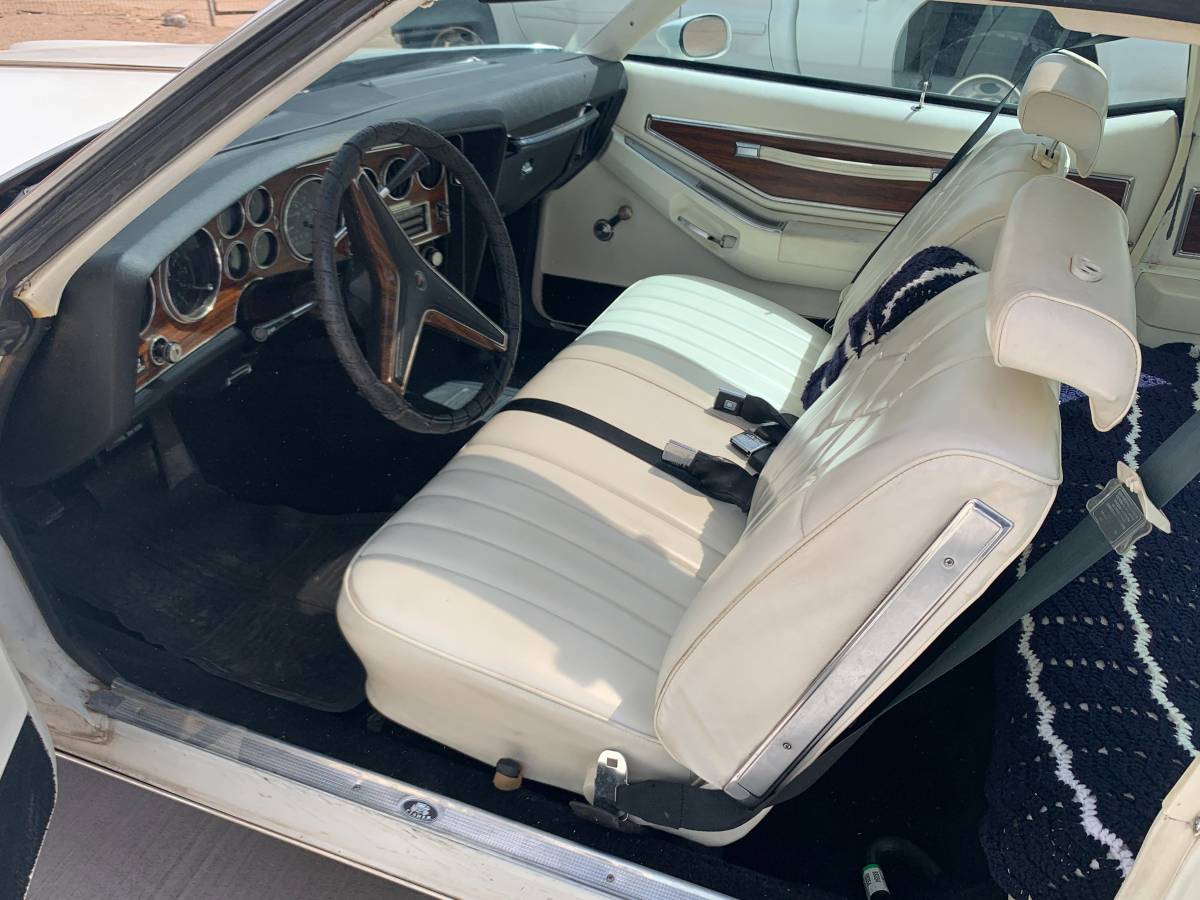 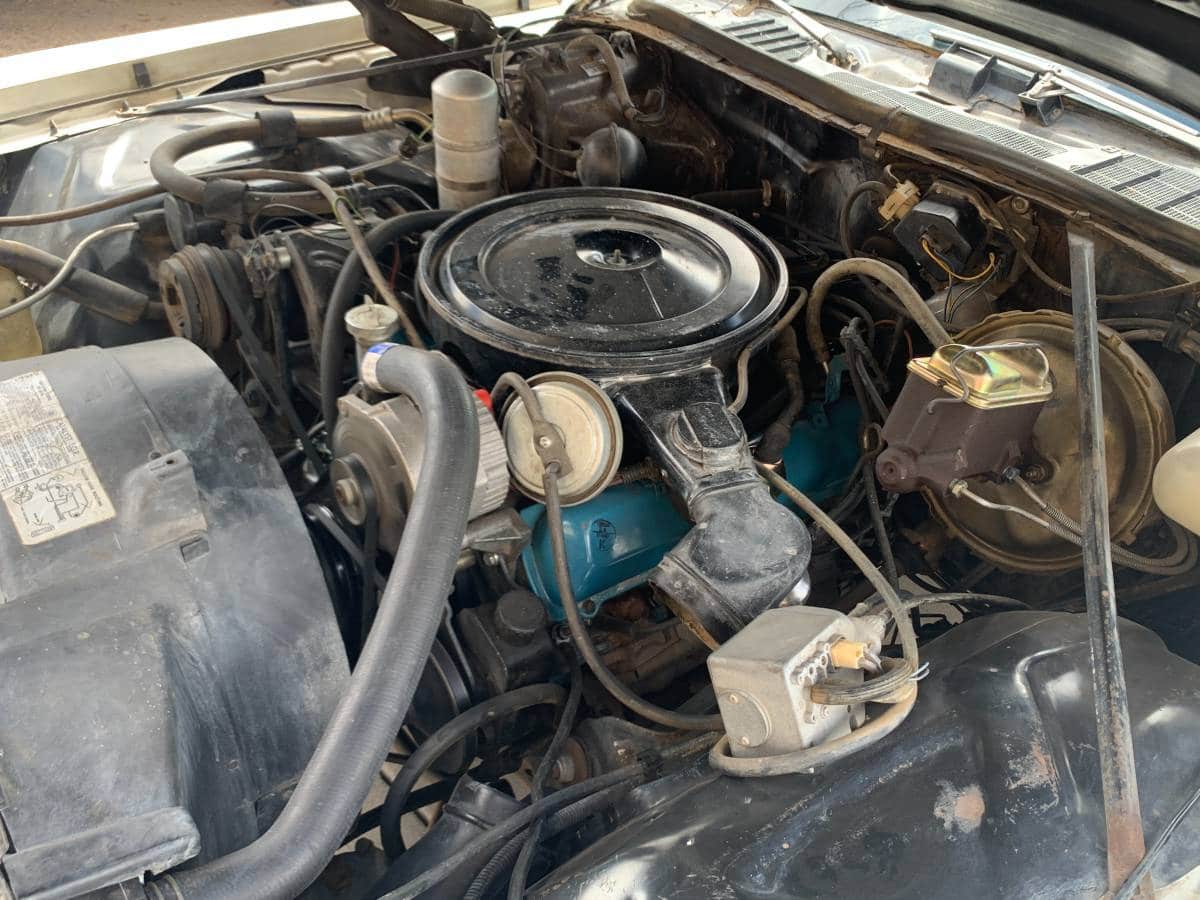 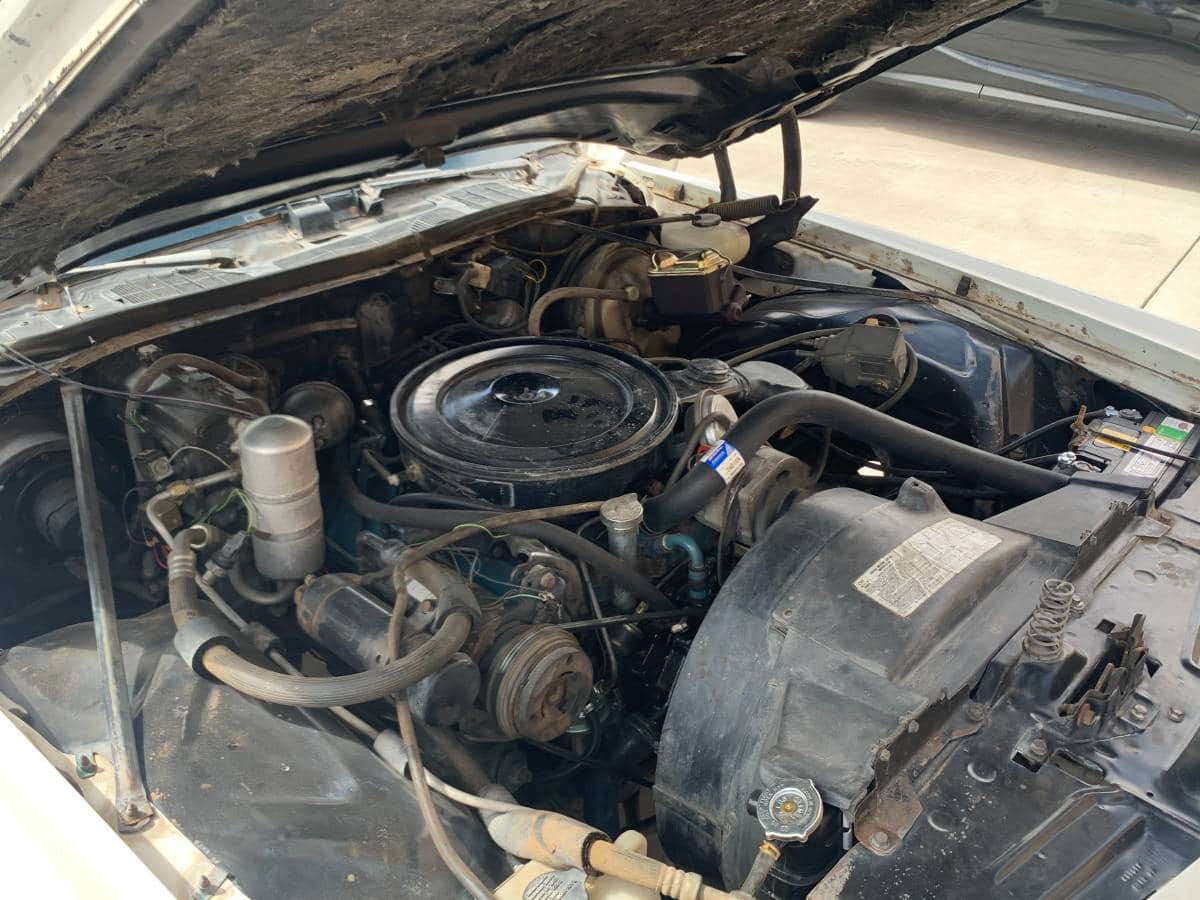 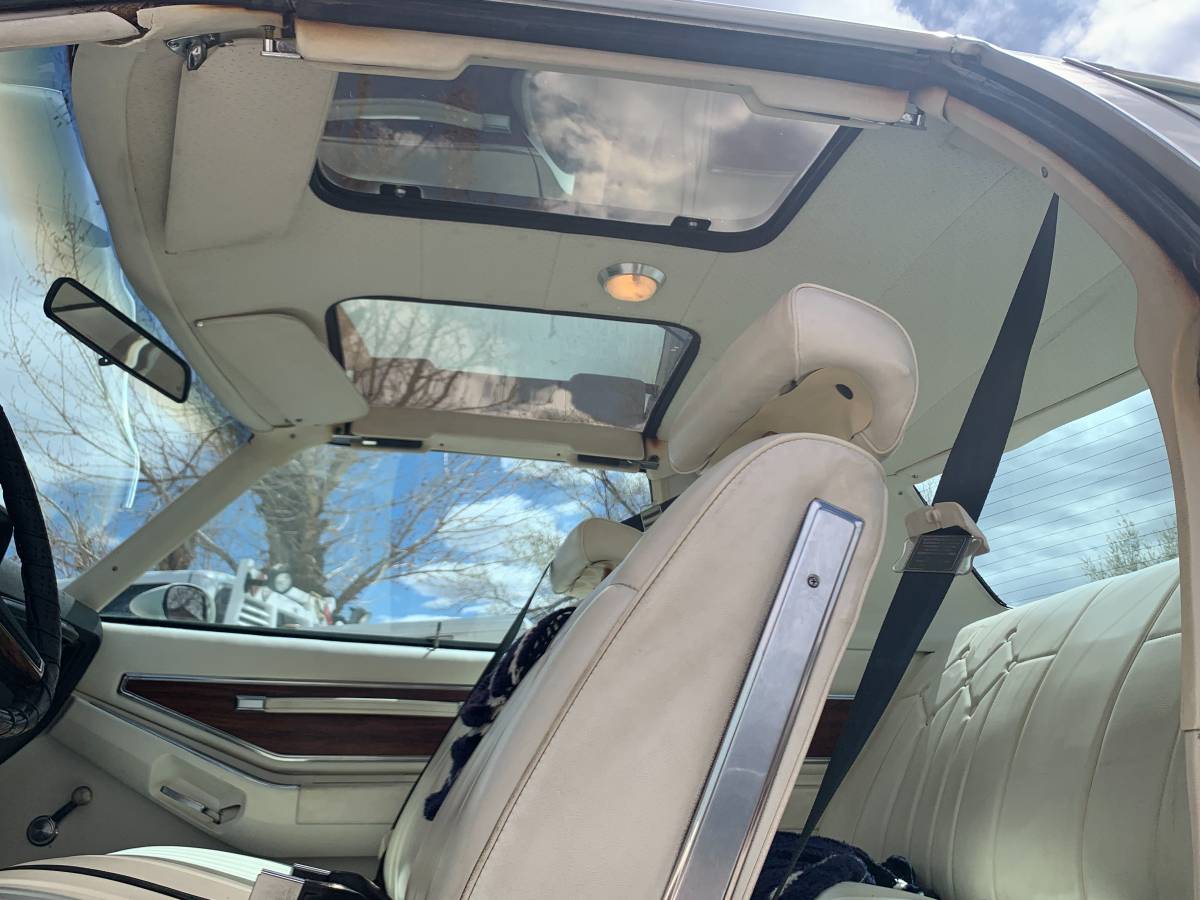 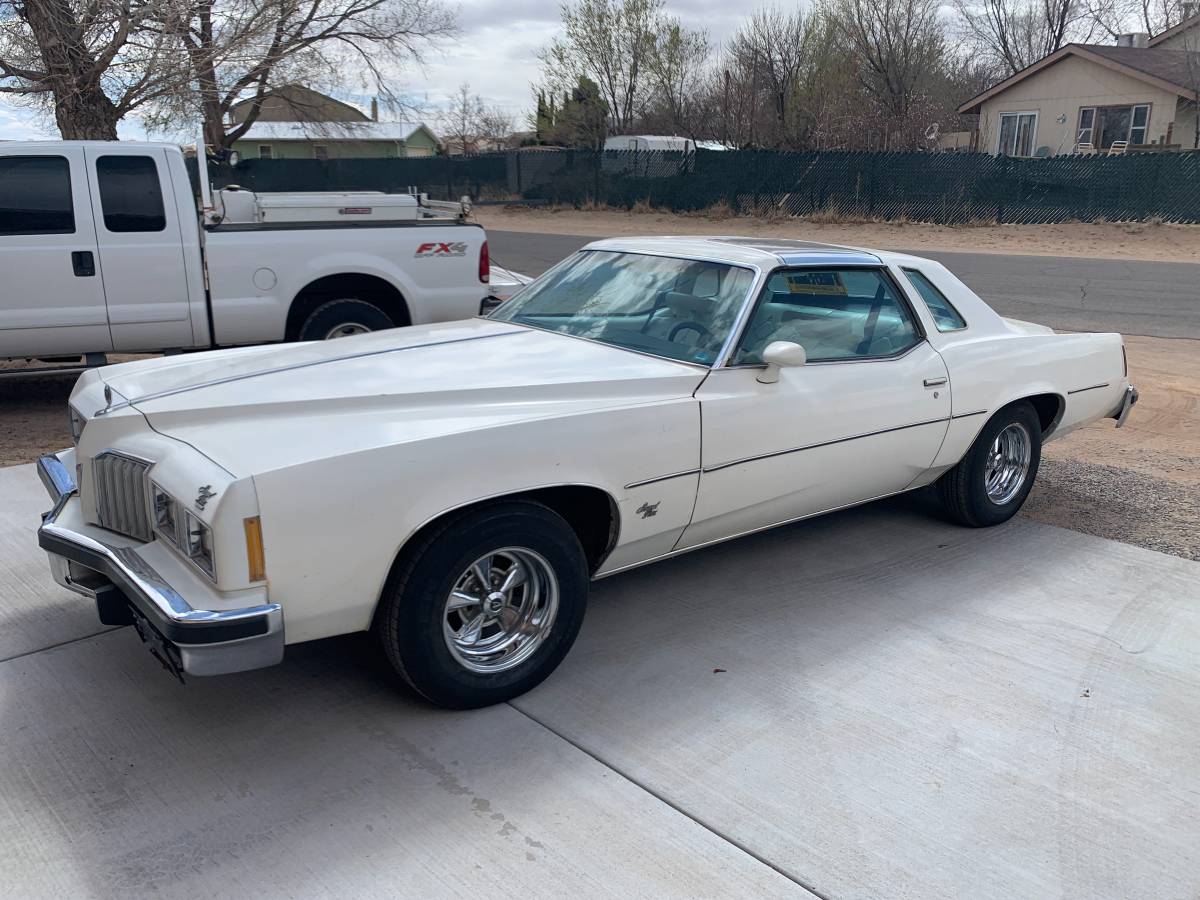 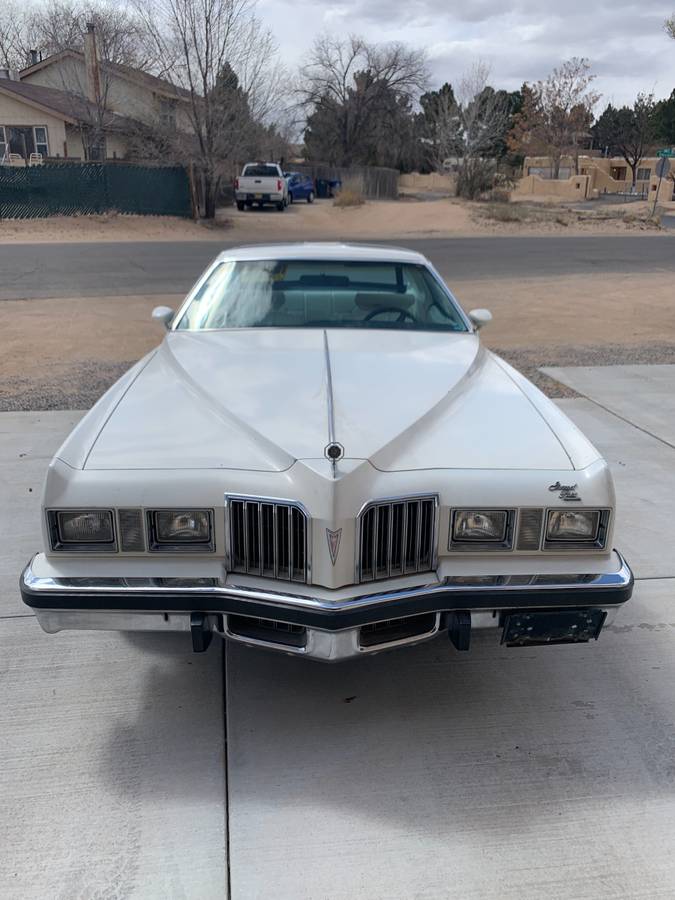 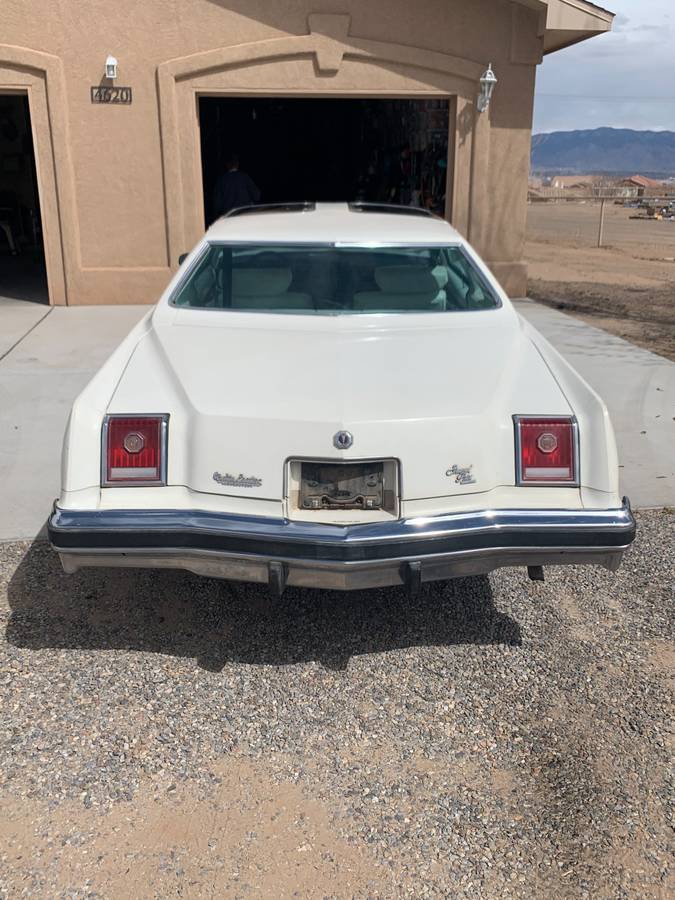 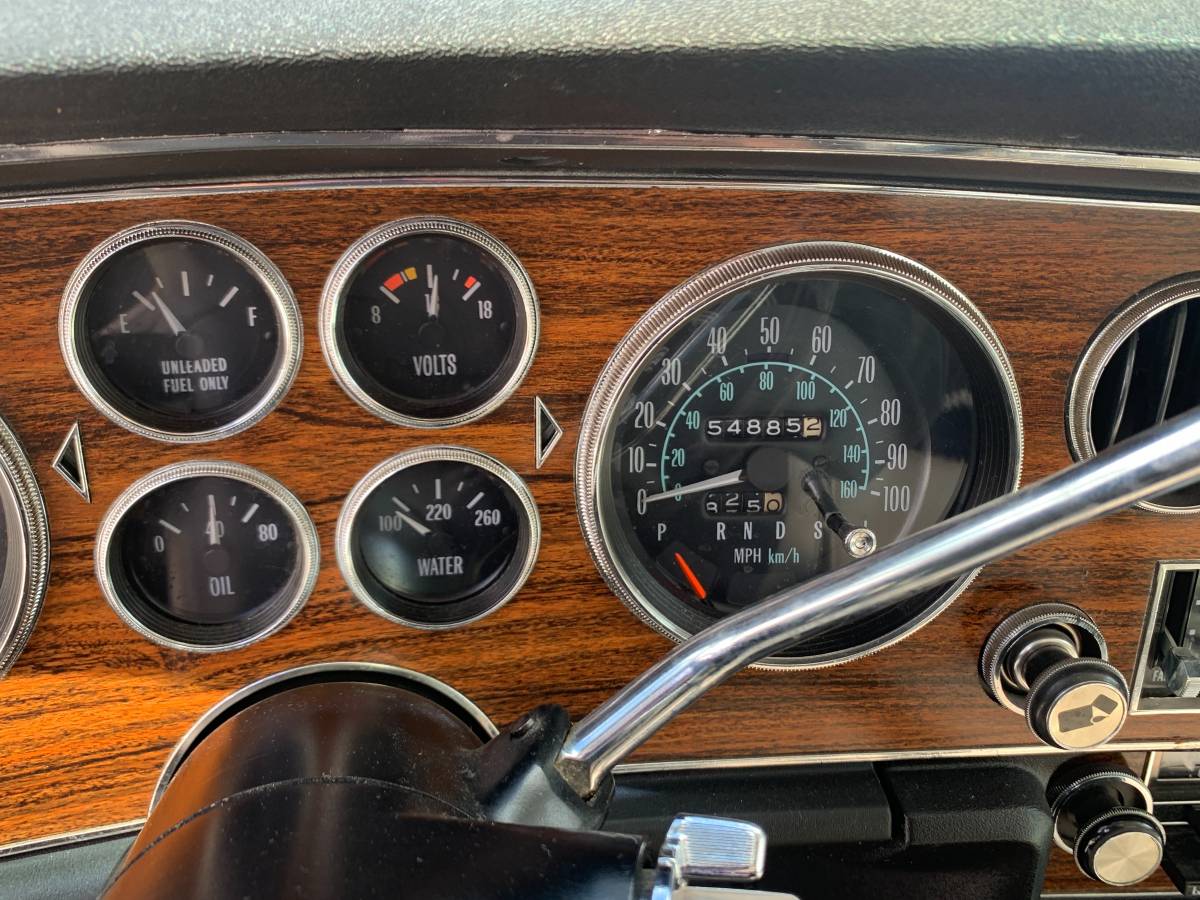 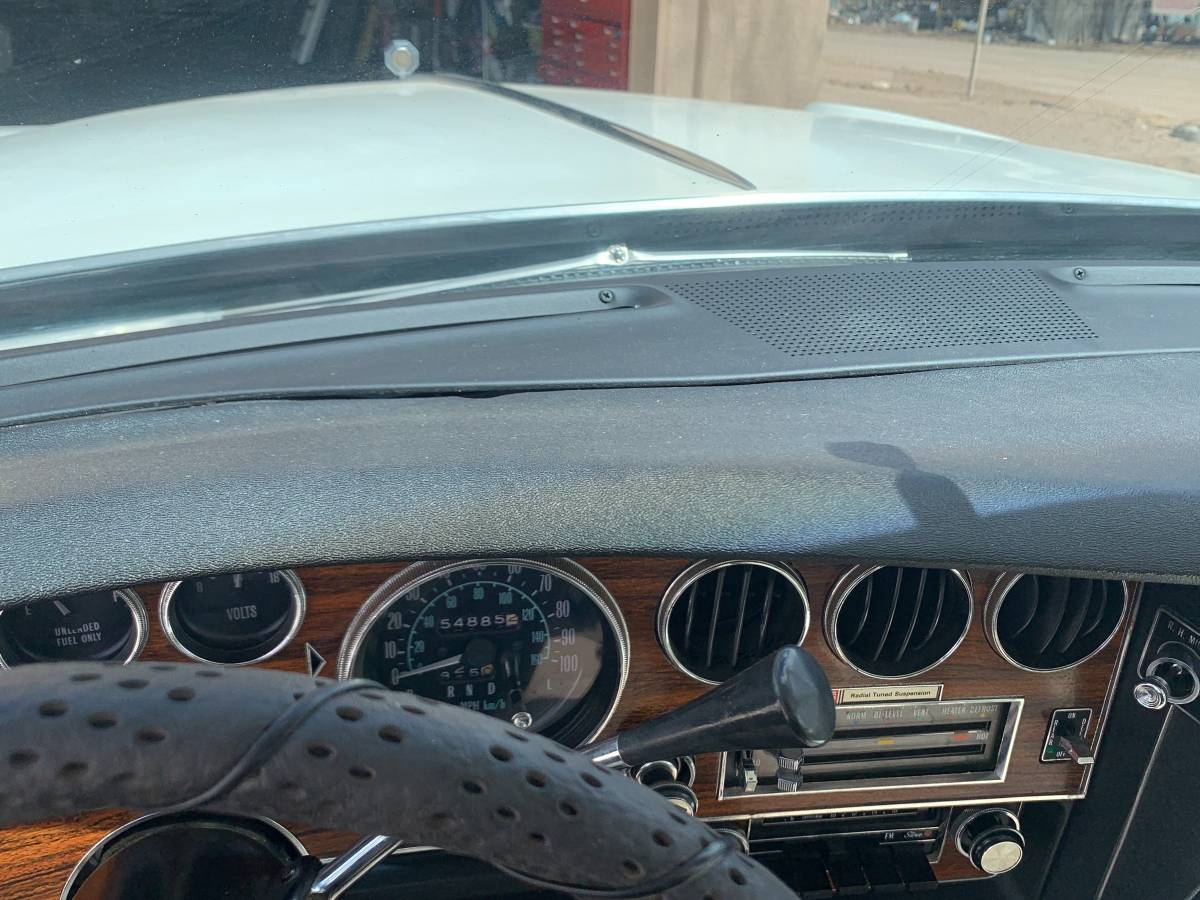 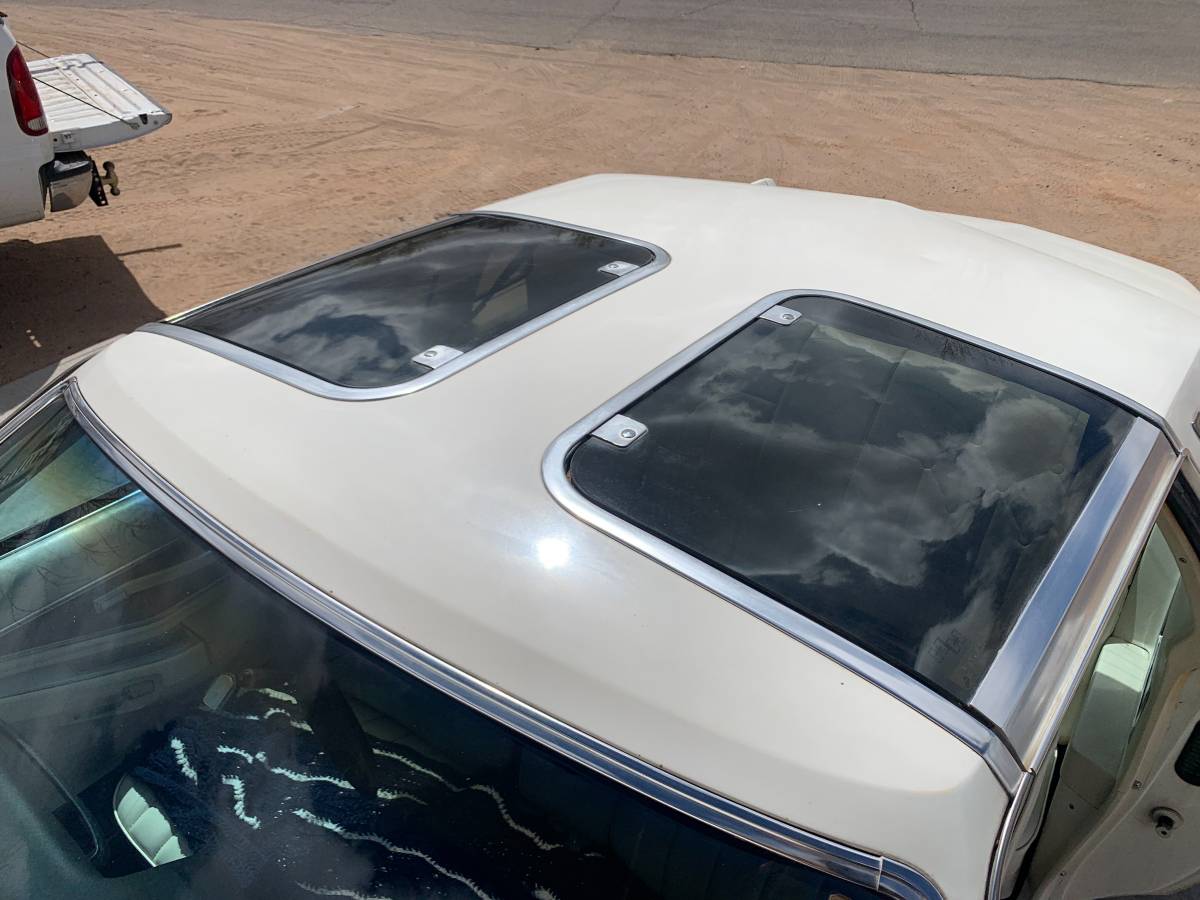 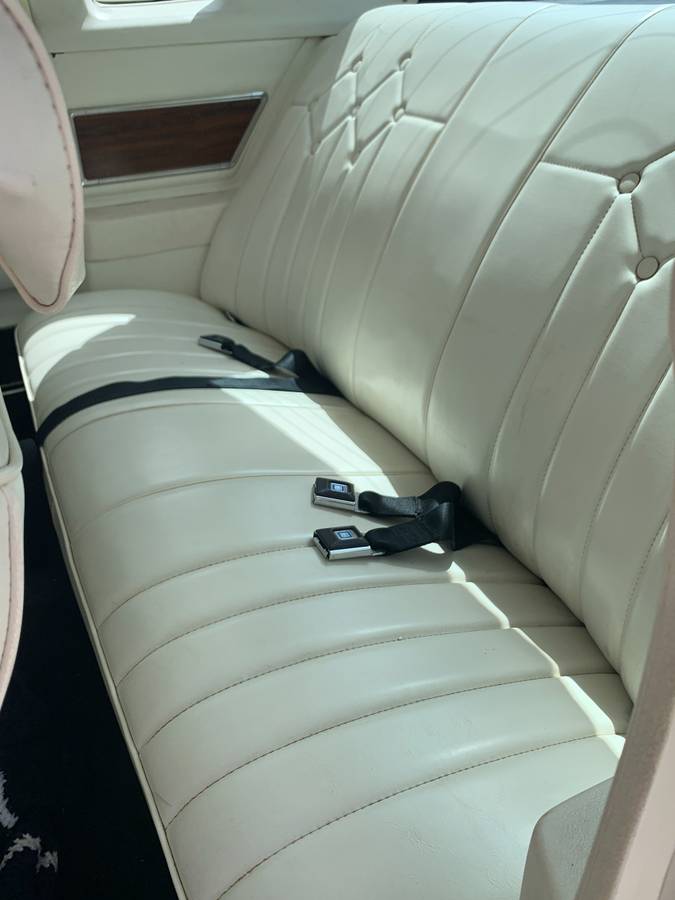 April 10, 2022, Update – We just confirmed the listing for this “Classifind” expired, so with no replacement found we’re assuming this ride “Sold?” While this one got away, please reach out either by email or call us directly if you’d like to be informed when we come across something similar.

We typically prefer our Malaise Era Pontiac Grand Prixs to feature bucket seats and full-length consoles.  However, the rare Hurst Hatch T-Tops on this all-white 1977 Pontiac Grand Prix Model J originally listed in March 2022 on Craigslist in Albuquerque, New Mexico is enough of a compensating differential to make an exception. However, the seller’s hyperbole on several fronts leaves us frustrated.  Specifically, the statement “ALL Original” is a stretch for two reasons. First are the set of chrome Cragar SS rims installed. No harm, no foul with the original wheels come with the car.  Second, lists a number of rebuilt items that make this car more of a resurrected barn find than a true survivor. Finally, is “One Owner” really true? We’re willing to bet the seller is technically the second owner who has never registered the car.

For 1973, Pontiac launched the third generation of its popular personal luxury coupe, the Grand Prix, on the new A-Body “Colonnade” hardtop platform shared with the Chevrolet Monte Carlo, Oldsmobile Cutlass Supreme, and Buick Regal.  With more emissions and safety features being added throughout the mid-70s, Pontiac increasingly focused on the luxury aspect of these cars as power output declined with each succeeding year.  The main styling cue differentiating second-generation Grand Prixs from their A-Body siblings was the cockpit-style wrap-around dashboard continued from the second-generation car.  The 1977 example presented here is the last “big” Grand Prix before GM downsized the A-Body line for 1978.  The long hood, short deck design initiated on the second generation Grand Prix looks even more stylish on these later models.

Despite having the fourth generation downsized Grand Prix in the queue for 1978, Pontiac still carried out a complete reworking of the front header and bumper for the final year 1977 Grand Prix. Stylists positioned the parking lamps between quad rectangular headlamps while they replaced the previous year’s “waterfall’ grille with a narrower one that extended into the lower portion of the bumper. Behind the bumper were new aluminum reinforcements designed to reduce weight. For the rear, Stylists simplified the taillights to eliminate the weighty pot metal bezels that created the horizontal stripe effect in 1976. The same three models (J, LJ, and SJ) were carried over with engine revisions. The base Model J received Pontiac’s new 135 horsepower 301 cubic inch (4.9 L) V8 as standard equipment, which many considered too small and underpowered to propel the 4,000-pound car. Moving up to either the mid-level LJ or top-Level SJ trim included either a 160 horsepower 350 cubic inch (5.7 L) V8 or the 180 horsepower 400 cubic inch (6.6 L), respectively. The original thinking on the 301 V8 was the weight savings from using a significantly lighter engine would cancel out the horsepower loss from the smaller displacement. This turned out to be a major miscalculation and 301 equipped cars became much less desirable among Grand Prix enthusiasts and collectors in later years.  We mention this as you’ll want to confirm with the seller which engine his car has.

Despite each of those three engines still being Pontiac-built units for 1977, that was only true for 49 of the 50 states. Pontiac’s own V8 engines could not meet the more stringent California emission standards set for 1977.  Consequently, all Grands Prix (and other Pontiac models) sold in California relied on Oldsmobile-built engines.  Lansing’s 350 cubic inch (5.7 L) “Rocket V8” powered the J and LJ models, while the 403 cubic inch (6.6 L) Rocket V8 came standard on the SJ and was optional on the other two GPs in California.

Grand Prix sales increased to an all-time high of over 270,000 units for 1977 despite competition from a newly downsized and lower-priced Ford Thunderbird and its badge-engineered Mercury Cougar XR-7 cousin.

Do you have a Colonnade-Era Pontiac Grand Prix story to share?  If so, comment below and let us know!