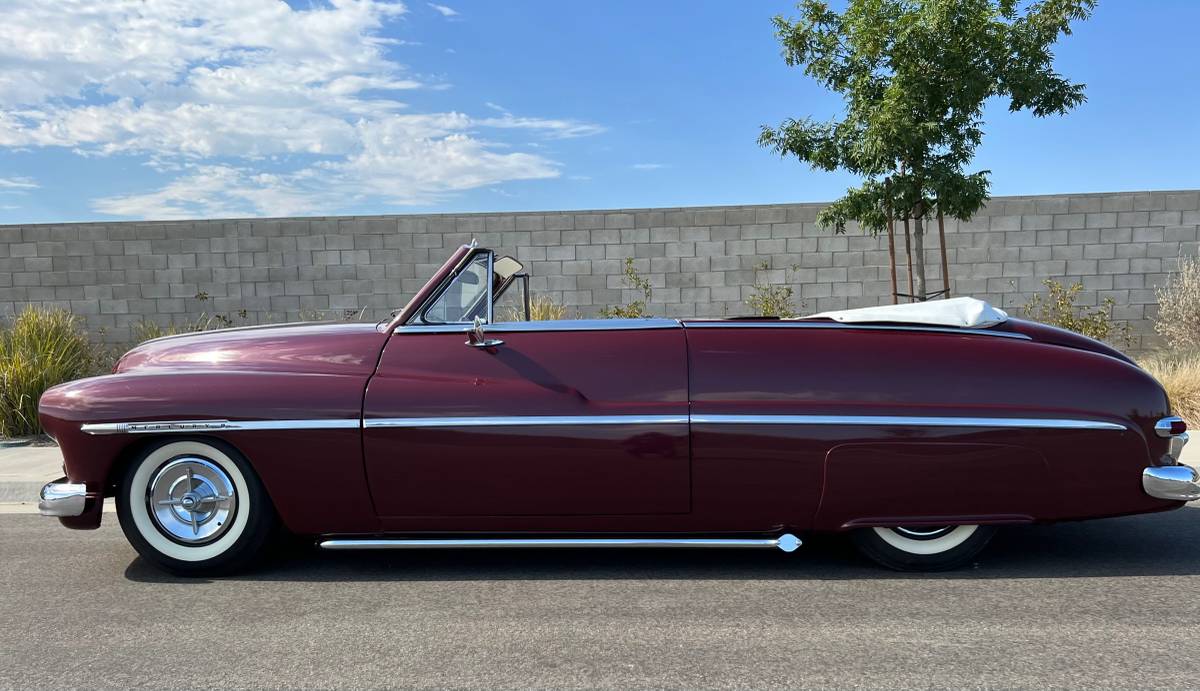 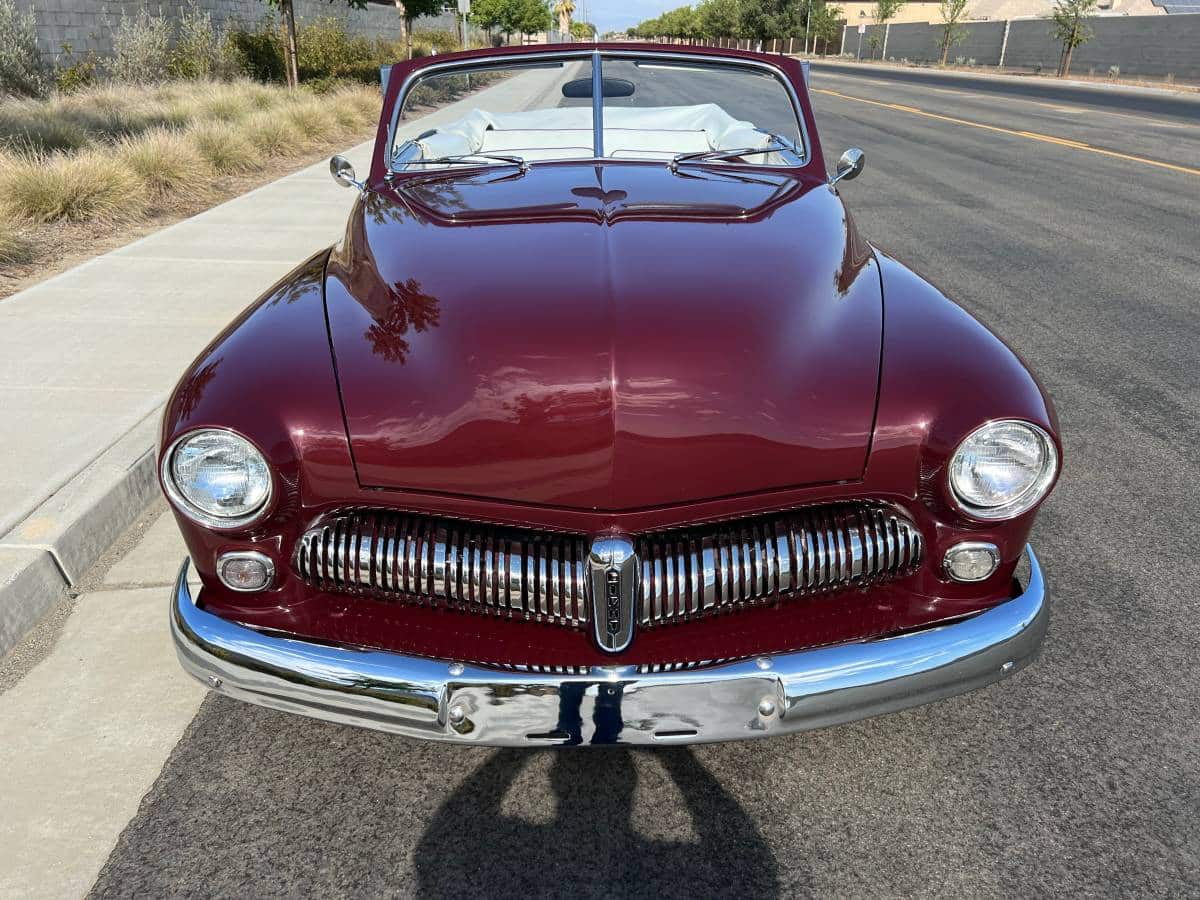 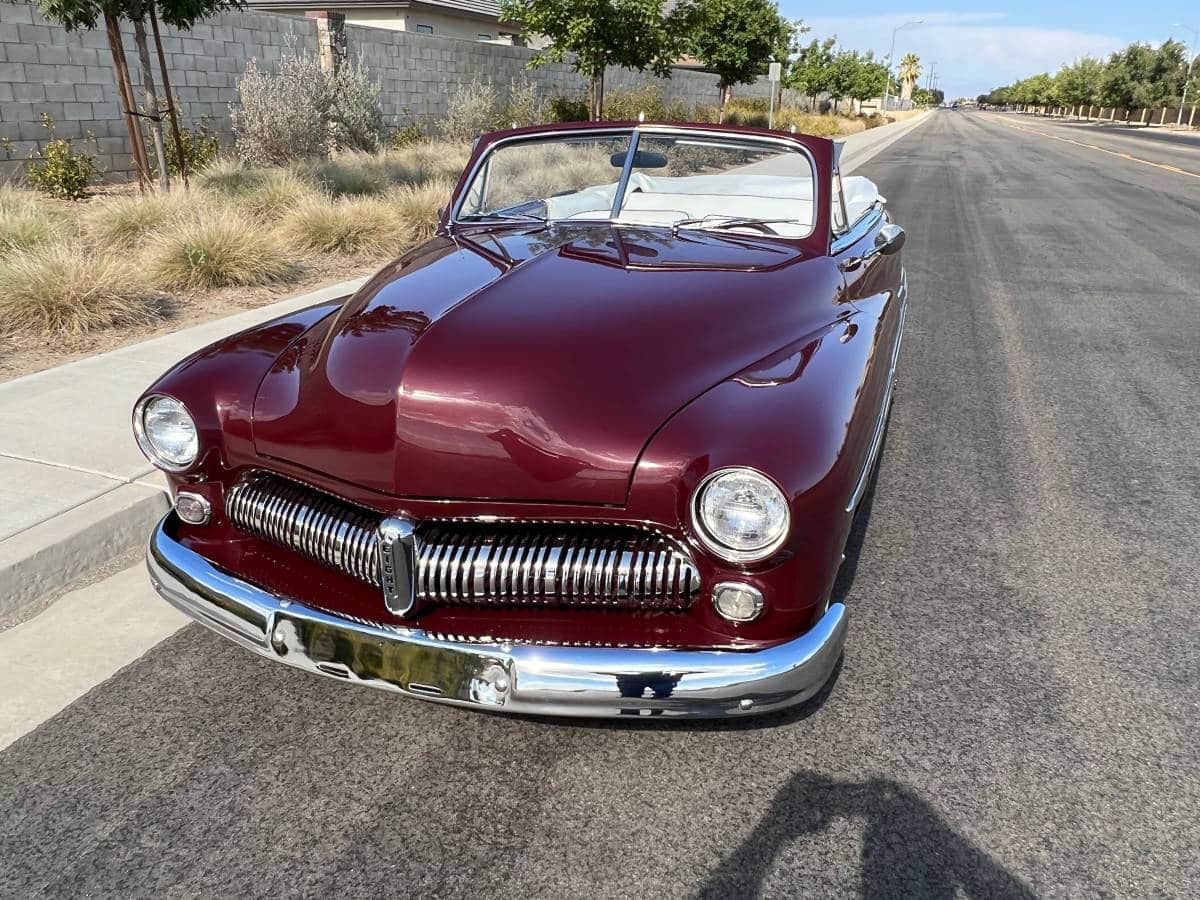 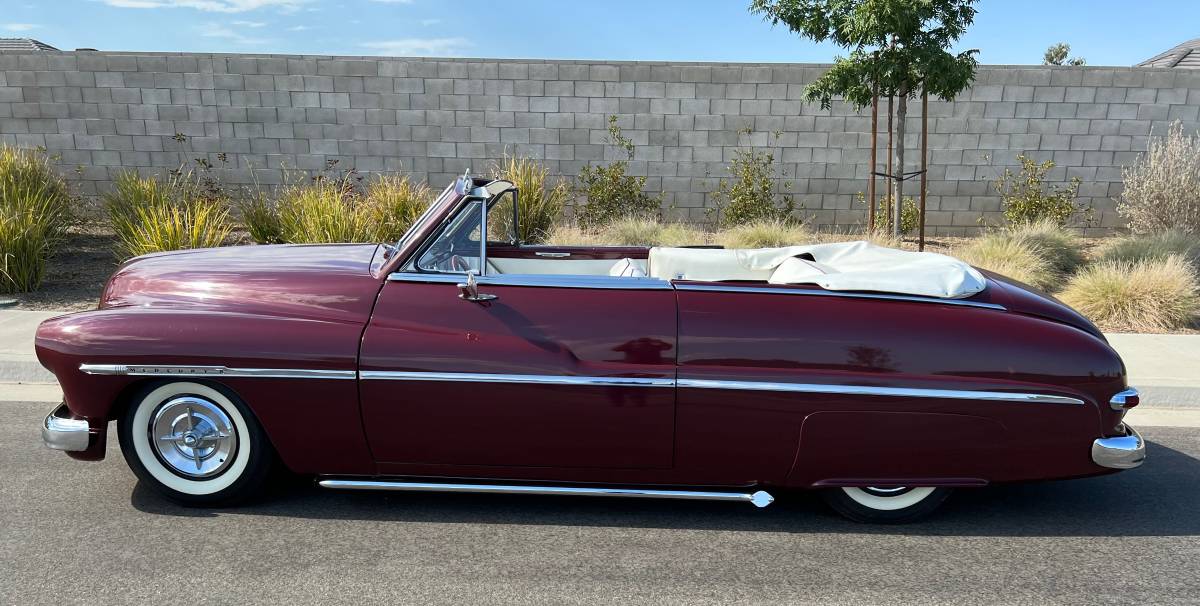 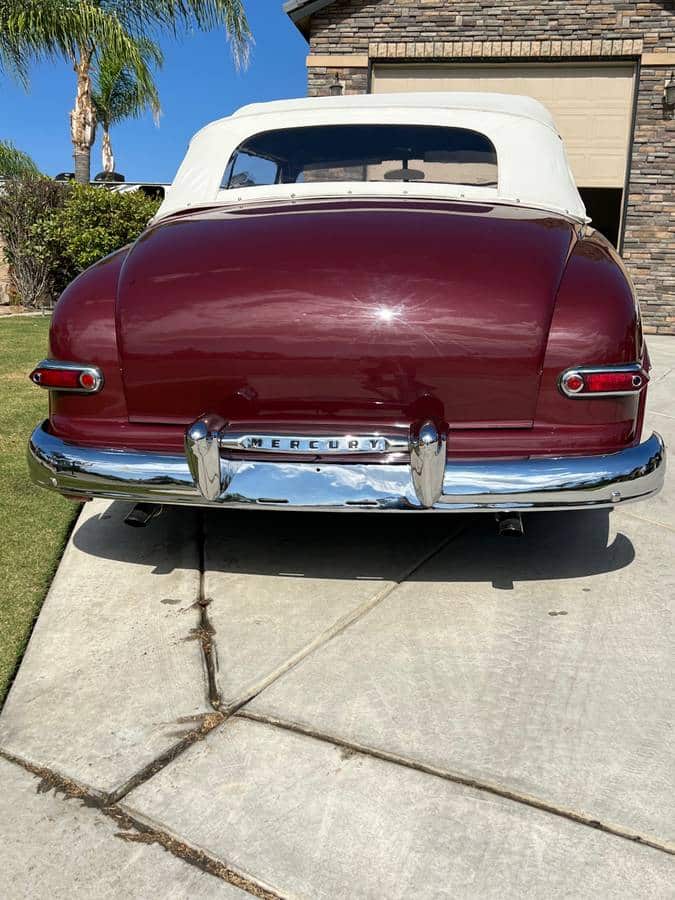 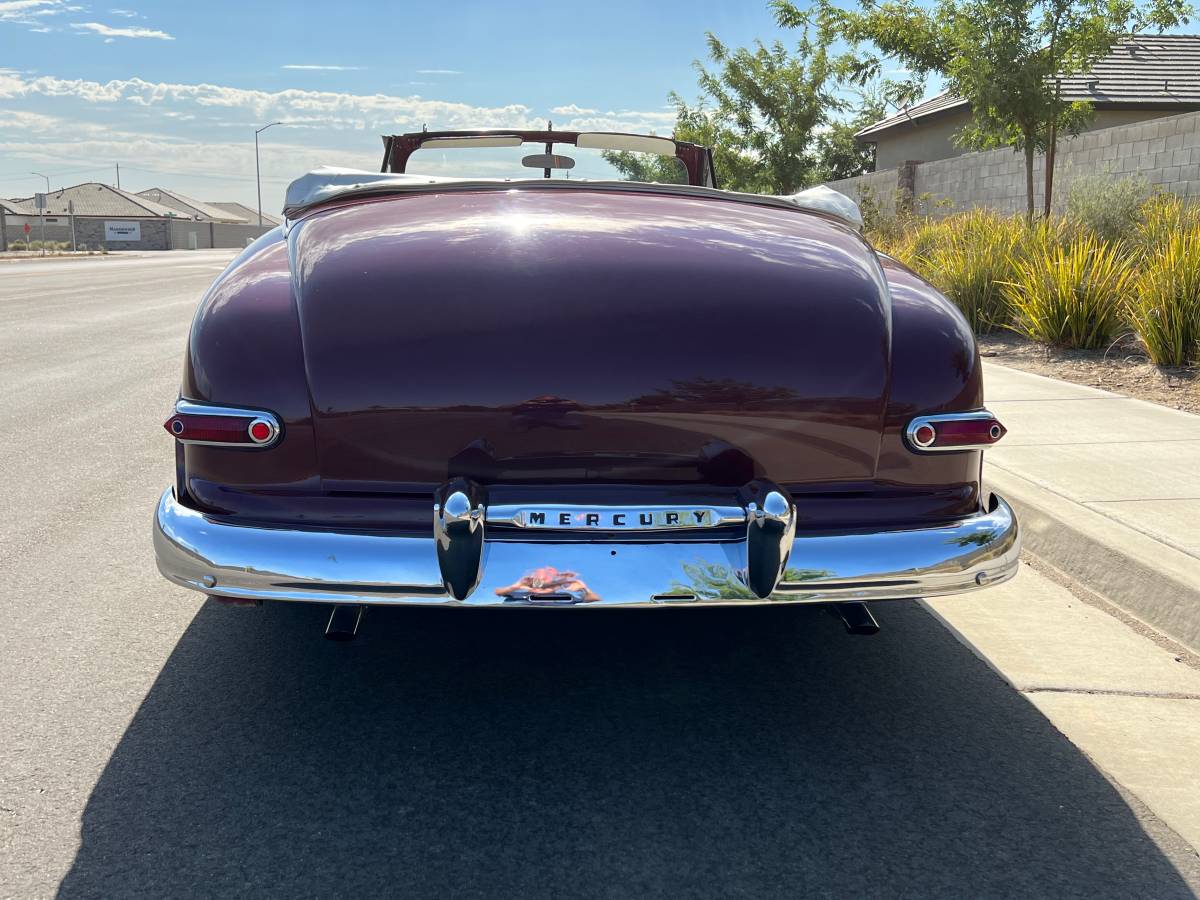 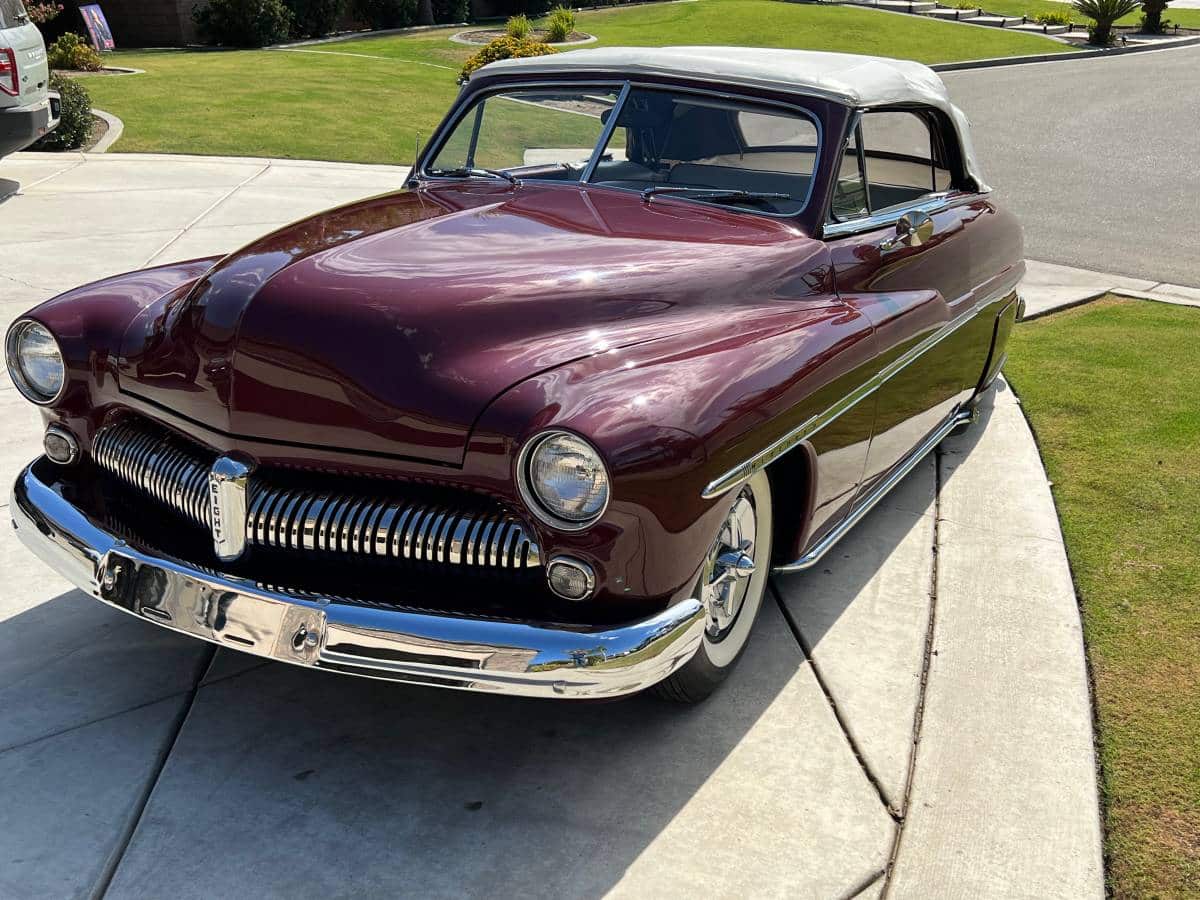 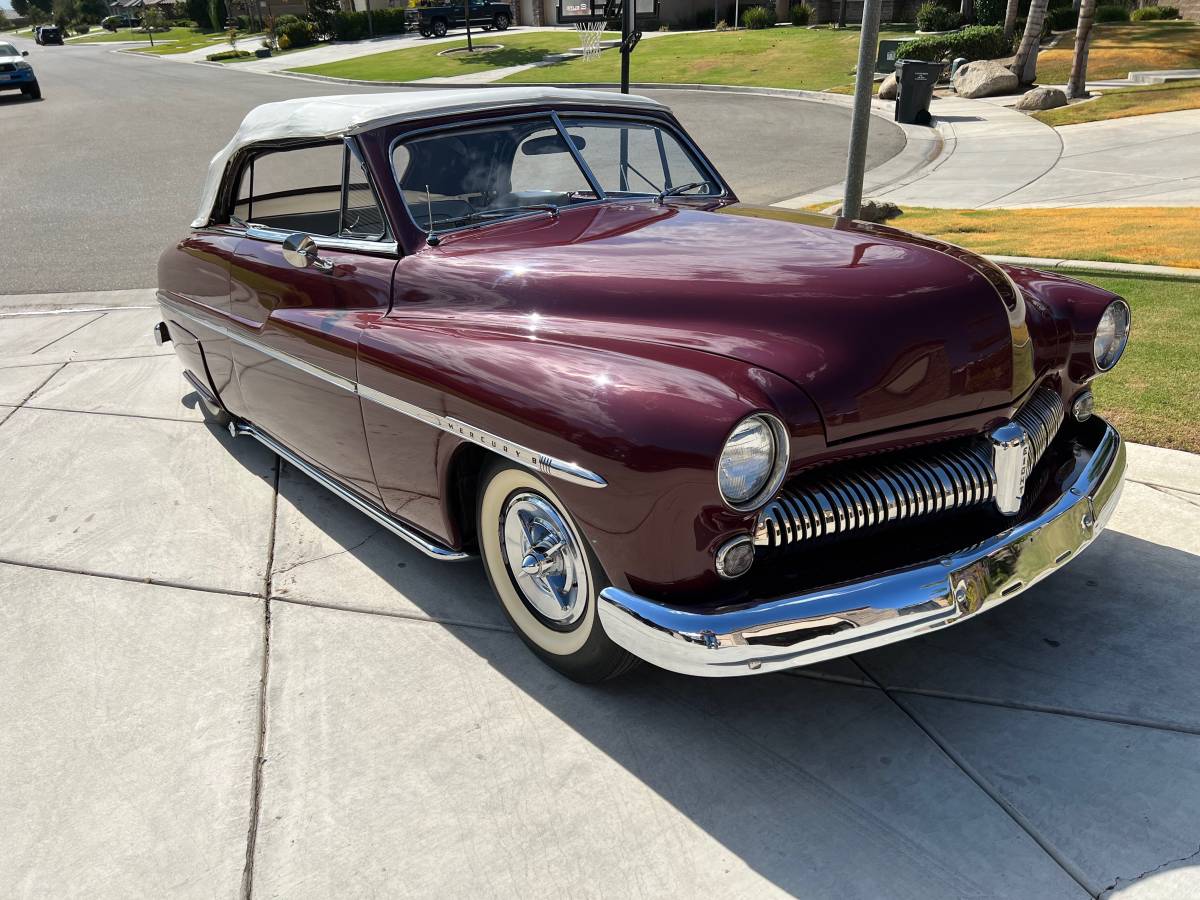 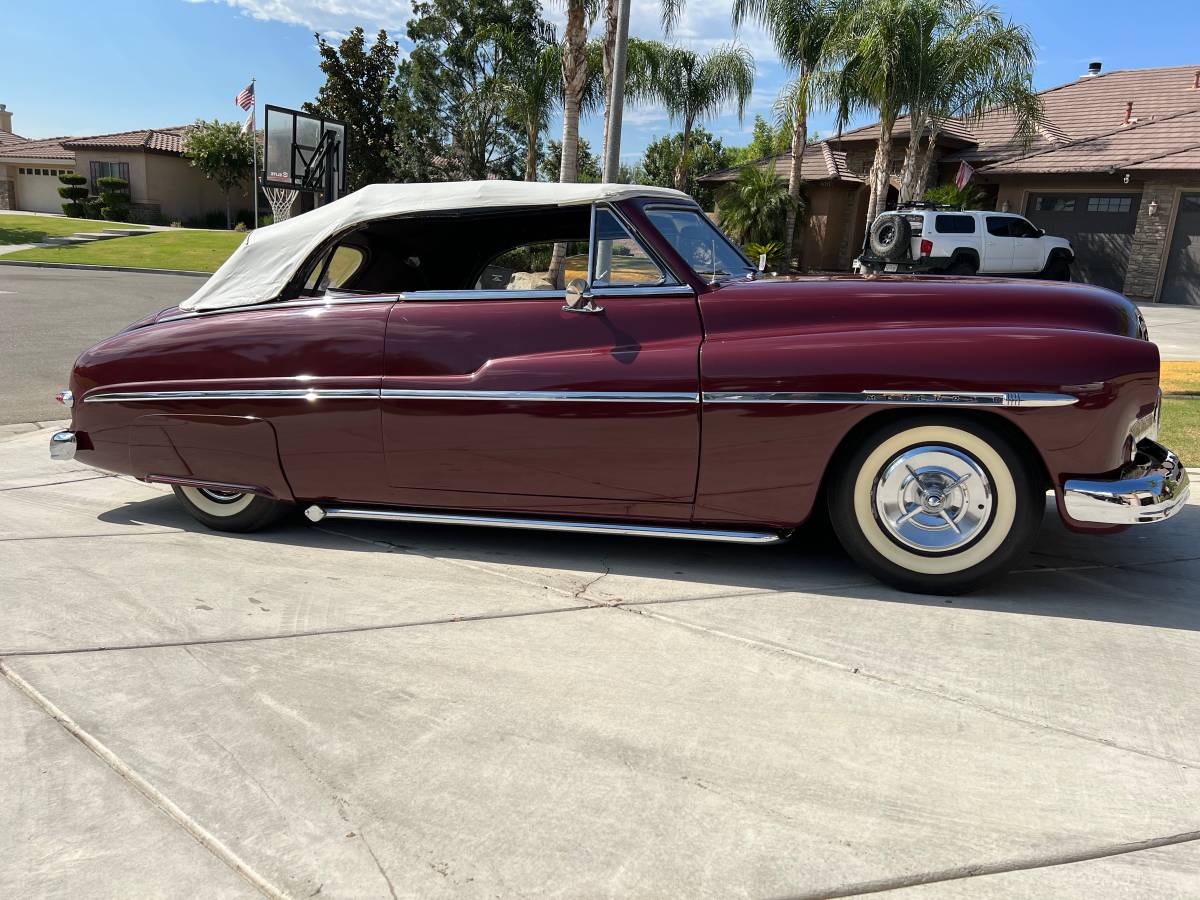 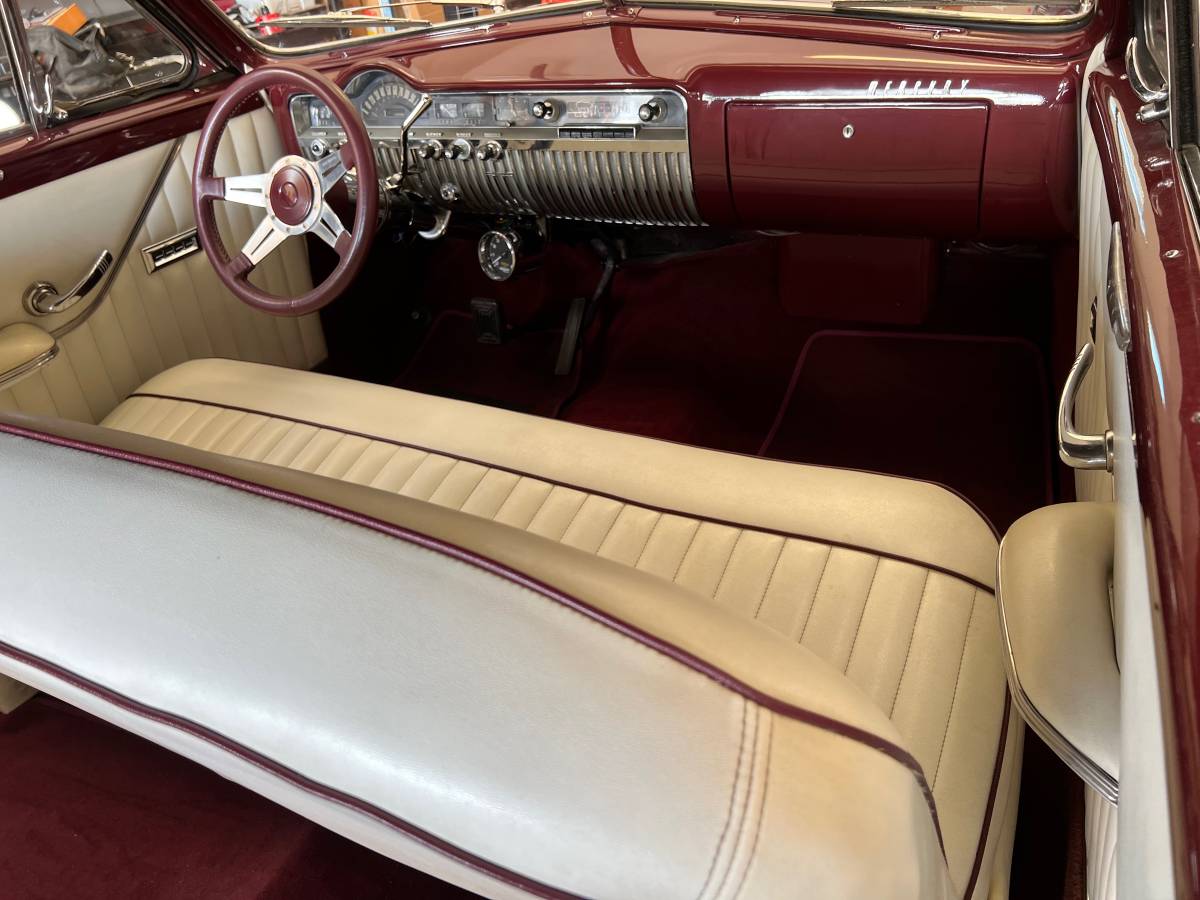 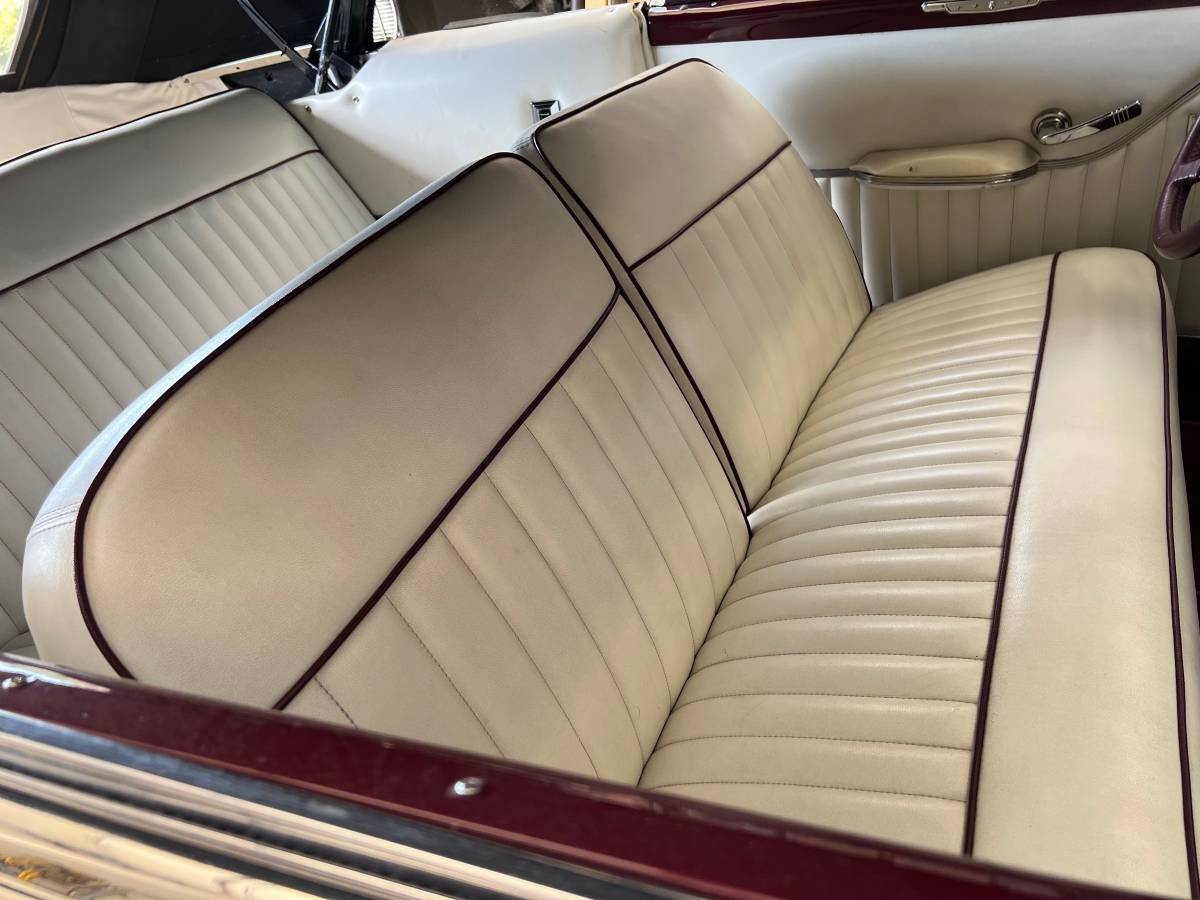 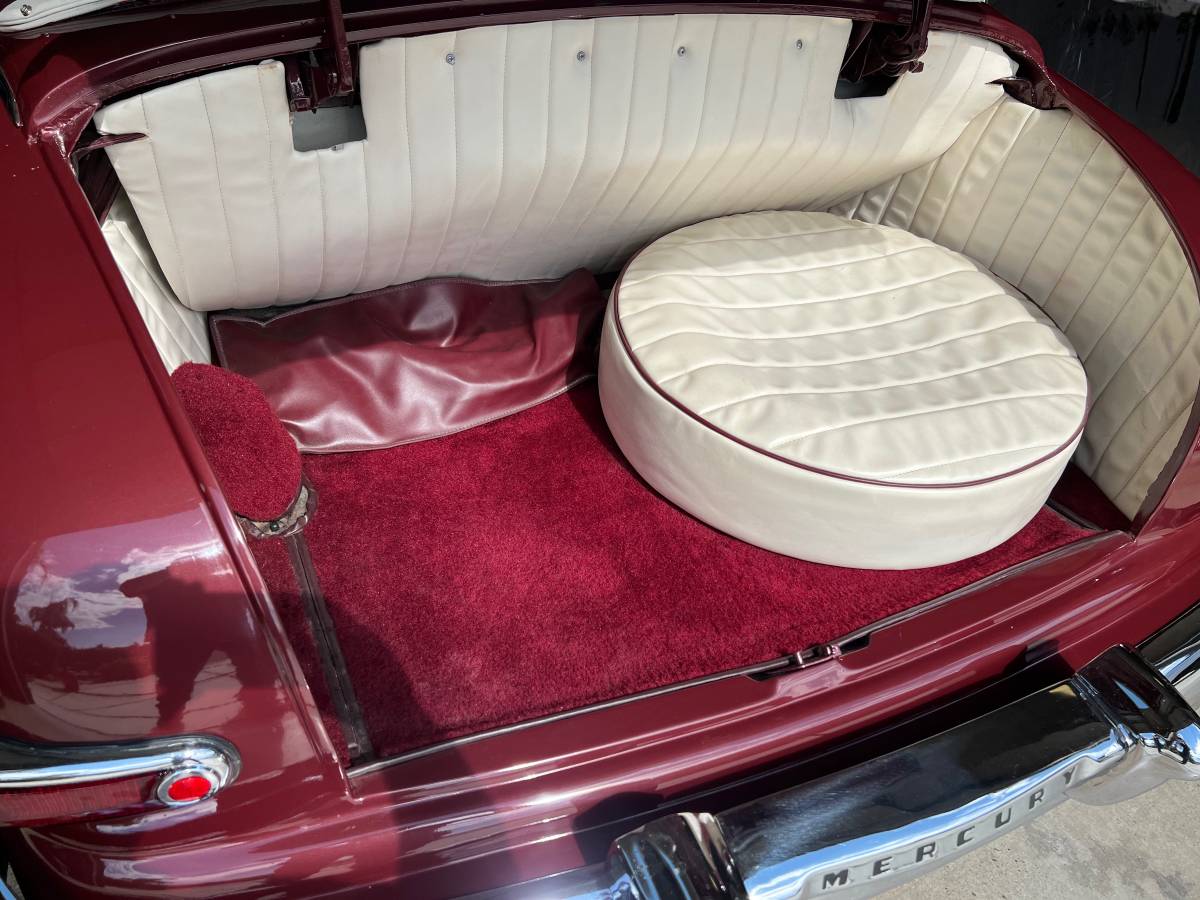 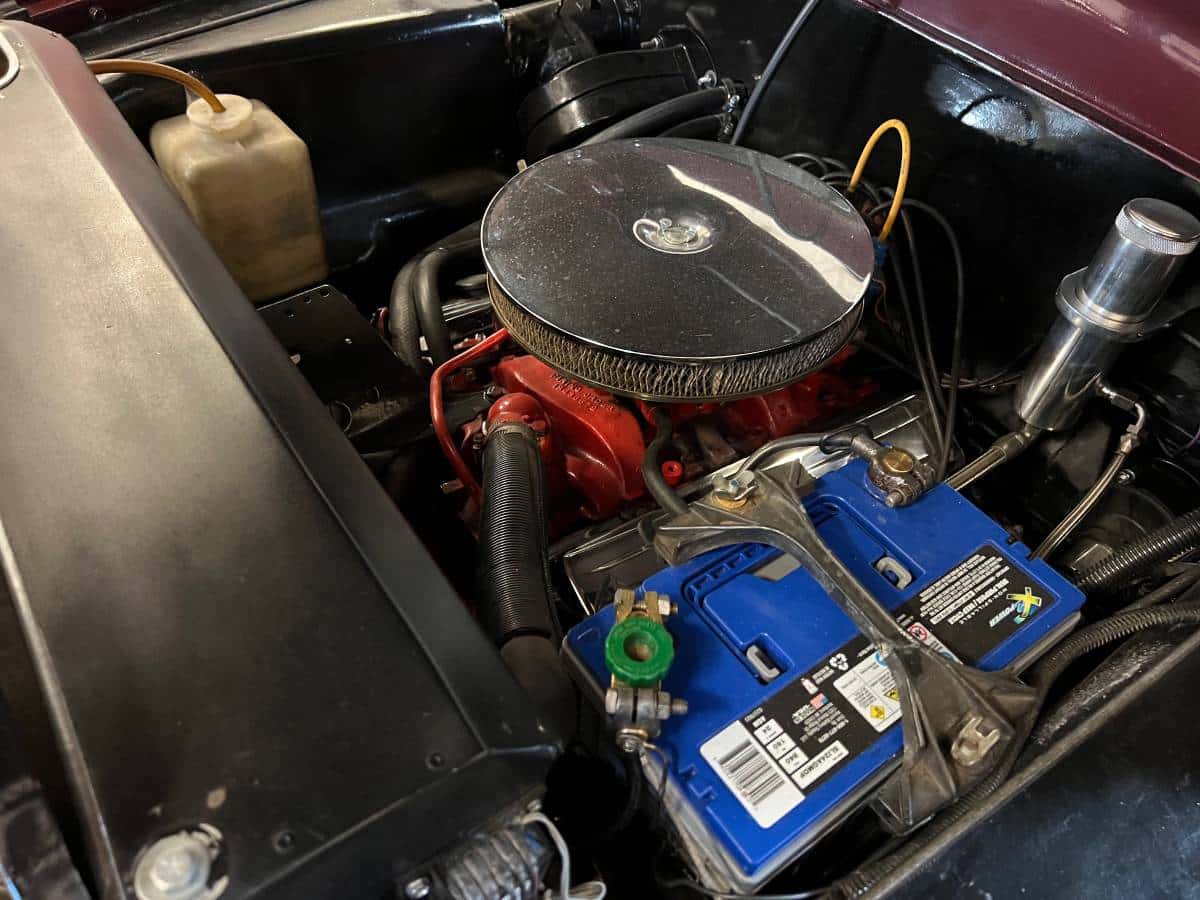 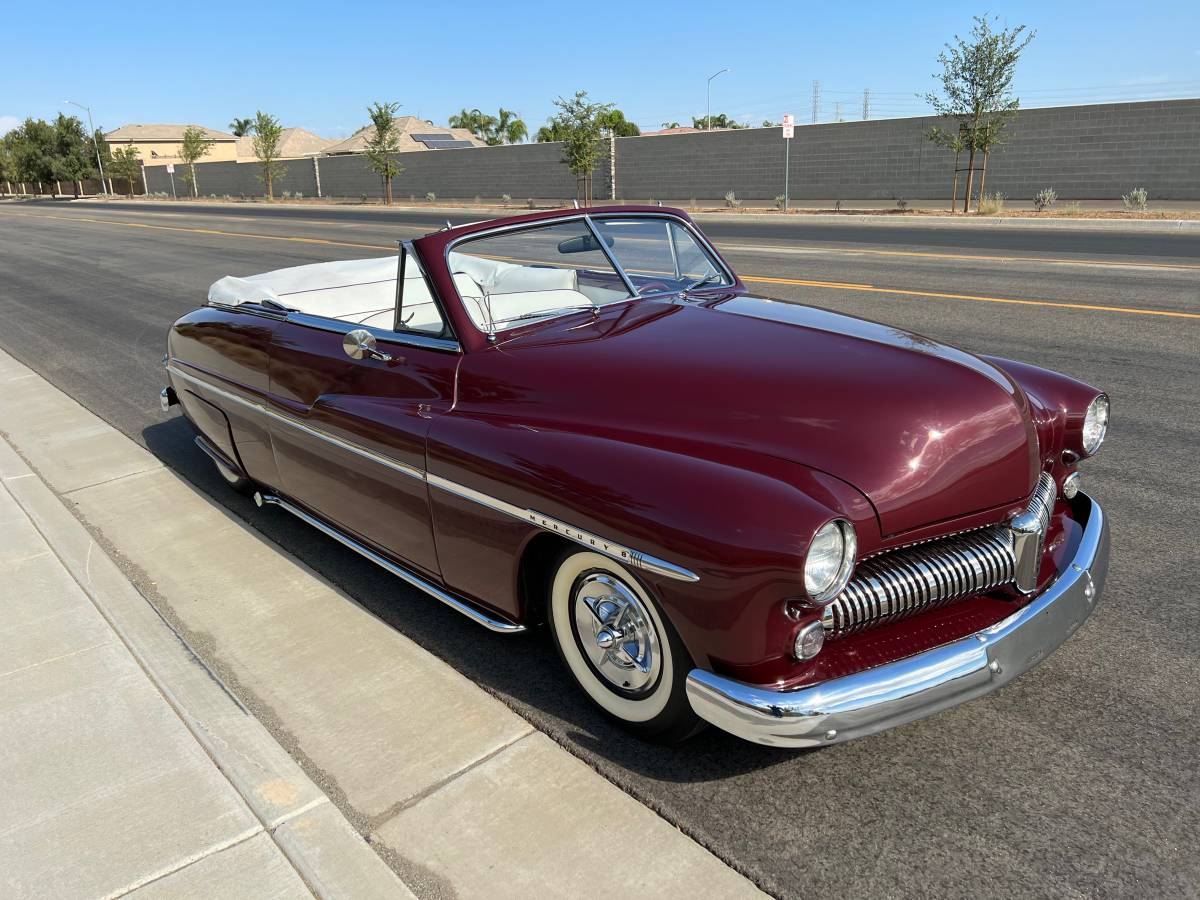 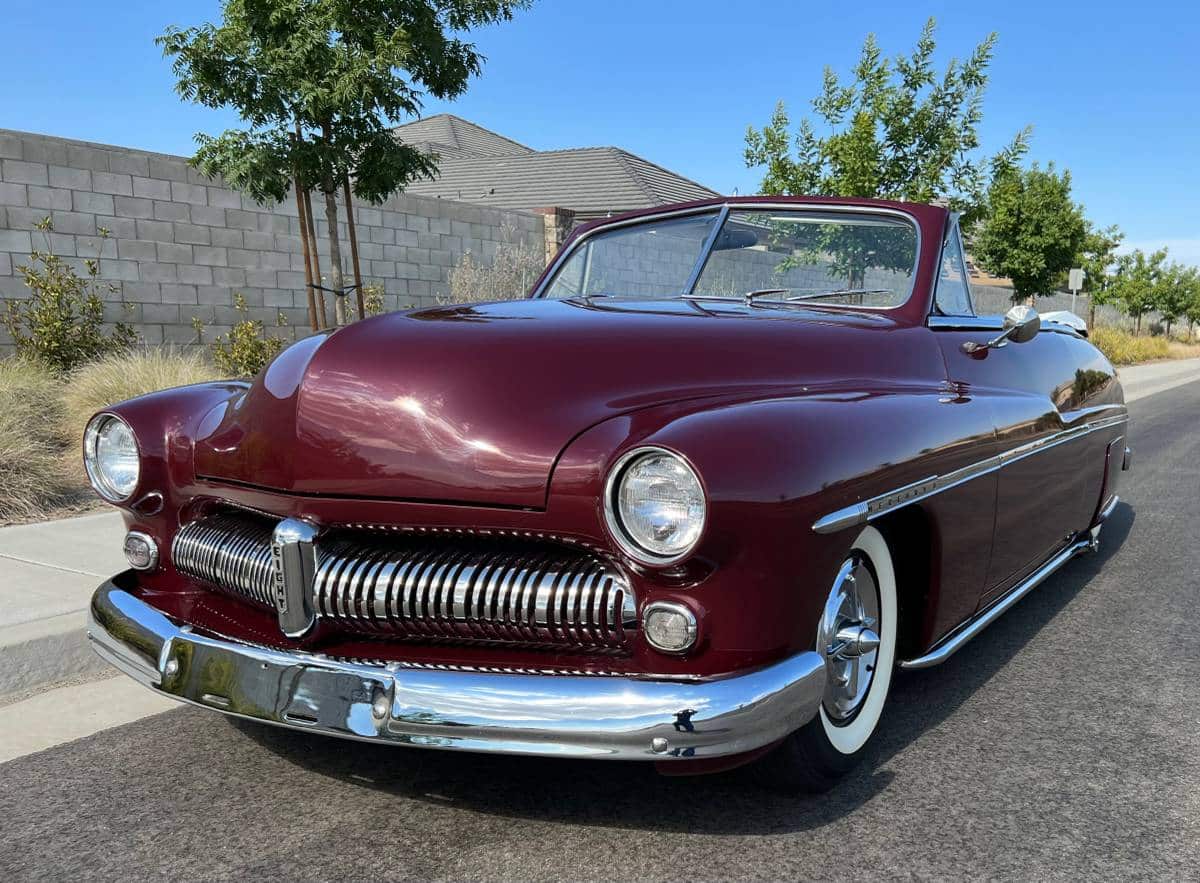 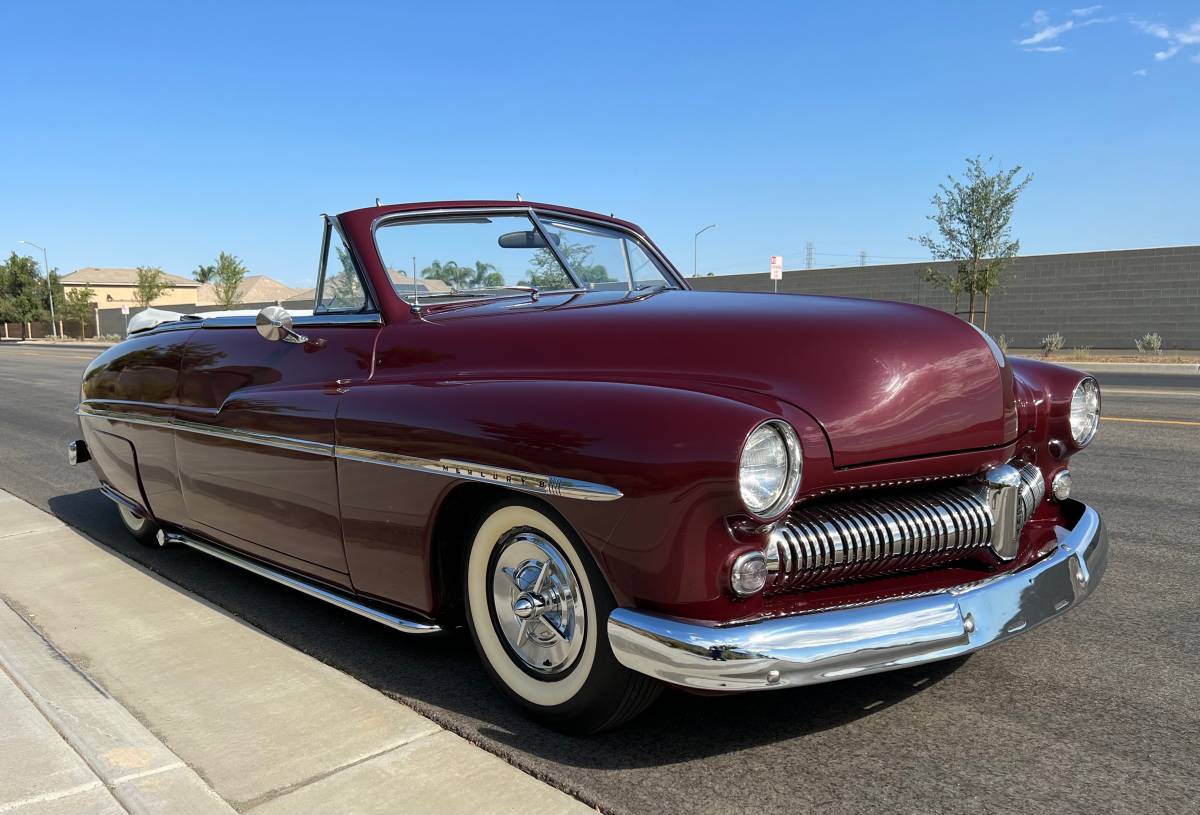 August 17, 2022, Update – We confirmed the seller of this “Classifind” deleted their listing, so we’re now able to call this one “SOLD!” While this one got away, please reach out either by email or call us directly if you’d like to be informed when we come across something similar.

Among customizers, the third-generation Mercury Eight produced between 1949 and 1951 remains one of the most desired models. Consequently, many received wildly chopped tops, shaved door handles, and frenched grille, head, and taillight treatments.  This burgundy over white 1950 Mercury Eight convertible, originally listed in July 2022 on Craigslist in Bakersfield, California, does not feature a chopped top. It more than makes up for it with lake pipes, shaved handles, and locks. Back in the day when hot rodders customized these cars, the flathead V8 was often yanked for new overhead valve designs donated by either a Cadillac or Oldsmobile.  Knowing that fact, we’re much more accepting of the fact this Merc features a 350 cubic inch Chevrolet small block V8.

Currently offered for $59,500, Classic.com, the analytics and search engine for the collector car market, confirms the ask is above the one-year rolling average of this guide’s summary for third-generation Mercury Eights of all body styles produced between 1949 and 1951.  By clicking on the green dots in the graph below, you can navigate to each comparable car sold as a way to help you evaluate the price of the truck featured here:

As a second data point, the  Collector Car Market Review Online Tool reveals the seller’s ask falls between this guide’s #2 Very Good” estimate of $47,900 and its #1 “Excellent” appraisal of $69,000.

In 1949, Mercury introduced its first postwar model line. The first Mercury of the combined Lincoln-Mercury Division, the Mercury Eight now shared its body with the Lincoln (instead of the Ford). Keeping its 118-inch wheelbase, the Mercury was sized between its two divisional counterparts. In place of the updated prewar body, Mercury adopted a “ponton” body, ending the use of running boards entirely, along with separate fenders. The 239 Flathead V8 was carried over, producing more power than in its Ford counterpart.  Ford introduced an eight-tube AM radio was introduced as an option; full instrumentation was added to the dashboard.  A new overdrive system was optional, activated by a handle under the dash.

The shift of the Mercury to the Lincoln body proved successful; alongside its Ford counterpart, Mercury broke sales records for 1949.  In 1950, the Monterey name made its first appearance, as Mercury introduced a high-end two-door coupe, similar to the Ford Crestliner, Lincoln Lido, and Lincoln Cosmopolitan Capri; the Monterey was intended to compete against the two-door hardtop coupes introduced by General Motors in 1949. The front suspension was independent with stabilizer bars.

Within its era and beyond, the third-generation Mercury Eight was popular with customizers. In 1949, Sam Barris built the first lead sled from a 1949 Mercury Eight; the Eight became the definitive “lead sled”, much as the Ford V-8 (as the “deuce”) was becoming the definitive hot rod. The Eights were among the first models to receive an aftermarket OHV engine swap, since Oldsmobile and Cadillac developed the first high-compression OHV V8 engines in 1949, whereas Ford still used a side-valve engine.

Sam and George Barris also used the 1949 body style to build “the most famous custom car ever”, the Hirohata Merc, for customer Bob Hirohata in 1953. Setting a style and an attitude, it had a “momentous effect” on custom car builders,  appeared in several magazines at the time,  and reappeared numerous times since, earning an honorable mention on Rod & Custom‘s “Twenty Best of All Time” list in 1991.

The Jeff Sterns YouTube Channel features this 1950 Mercury news reel claiming how everyone is getting a Mercury that year:

As long as you don’t mind driving a vintage Ford powered by a Chevy, this 1950 Mercury Eight convertible offers a nice combination of luxury touches with just the right amount of customizing for a simplistic look.  While the great pictures this listing provides can be very tempting, we strongly encourage some sort of in-person inspection to verify the quality of the fabrication and customizing work.

Show or go: What would you do with this restored 1950 Mercury Eight convertible?  Please comment below and let us know!