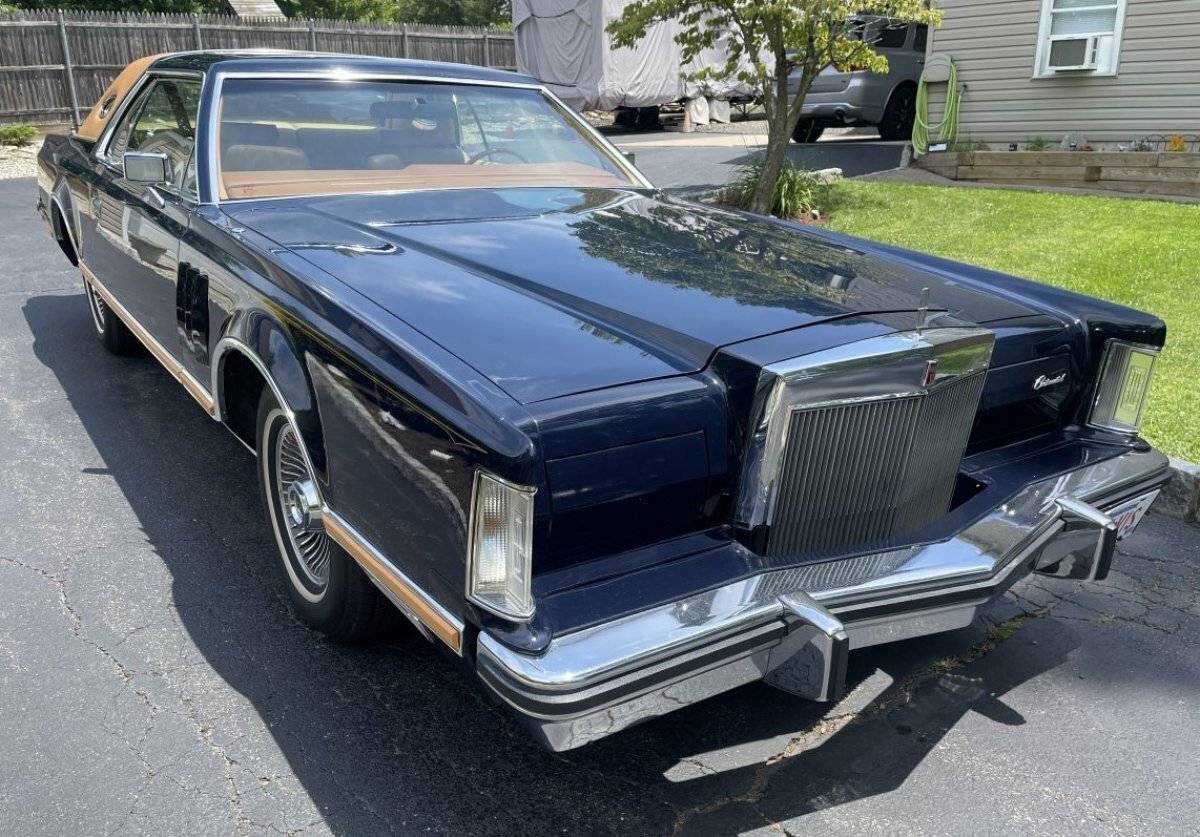 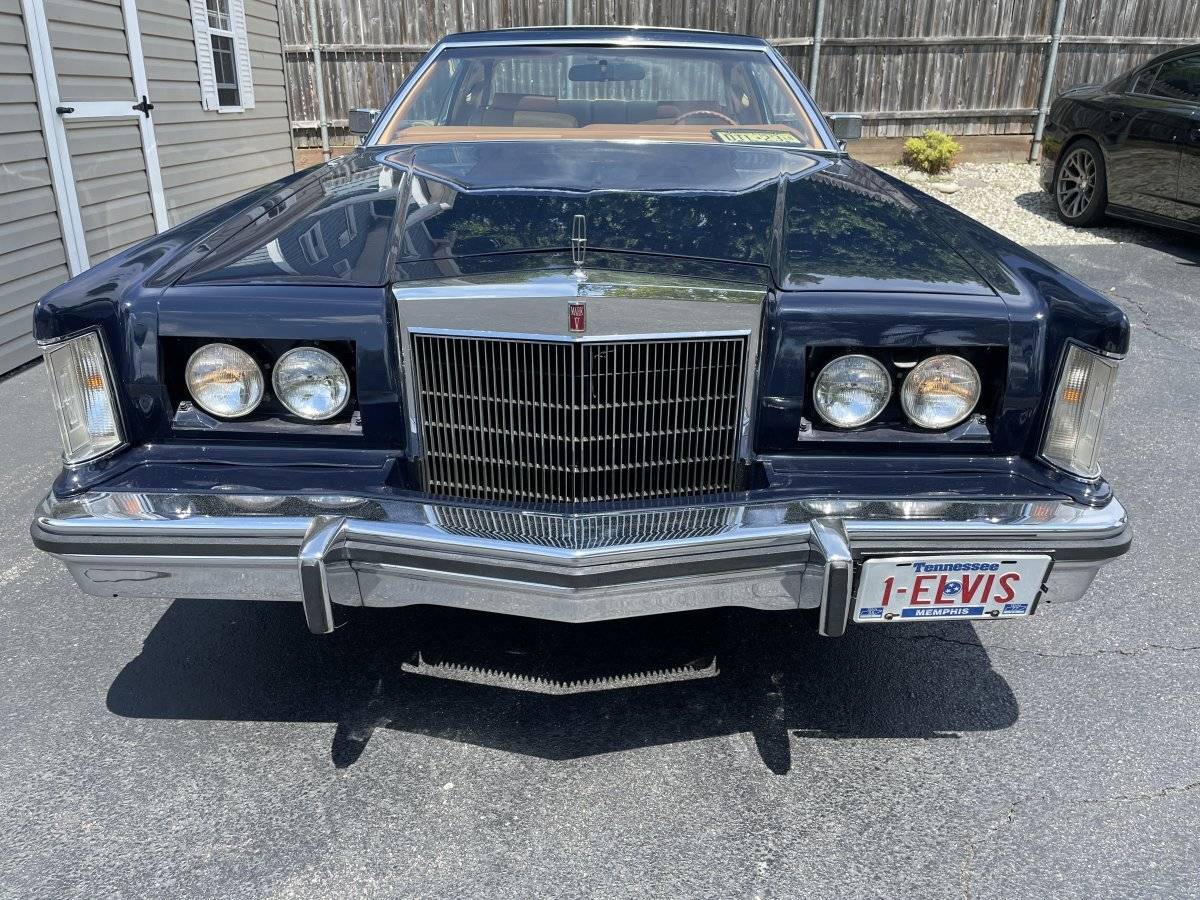 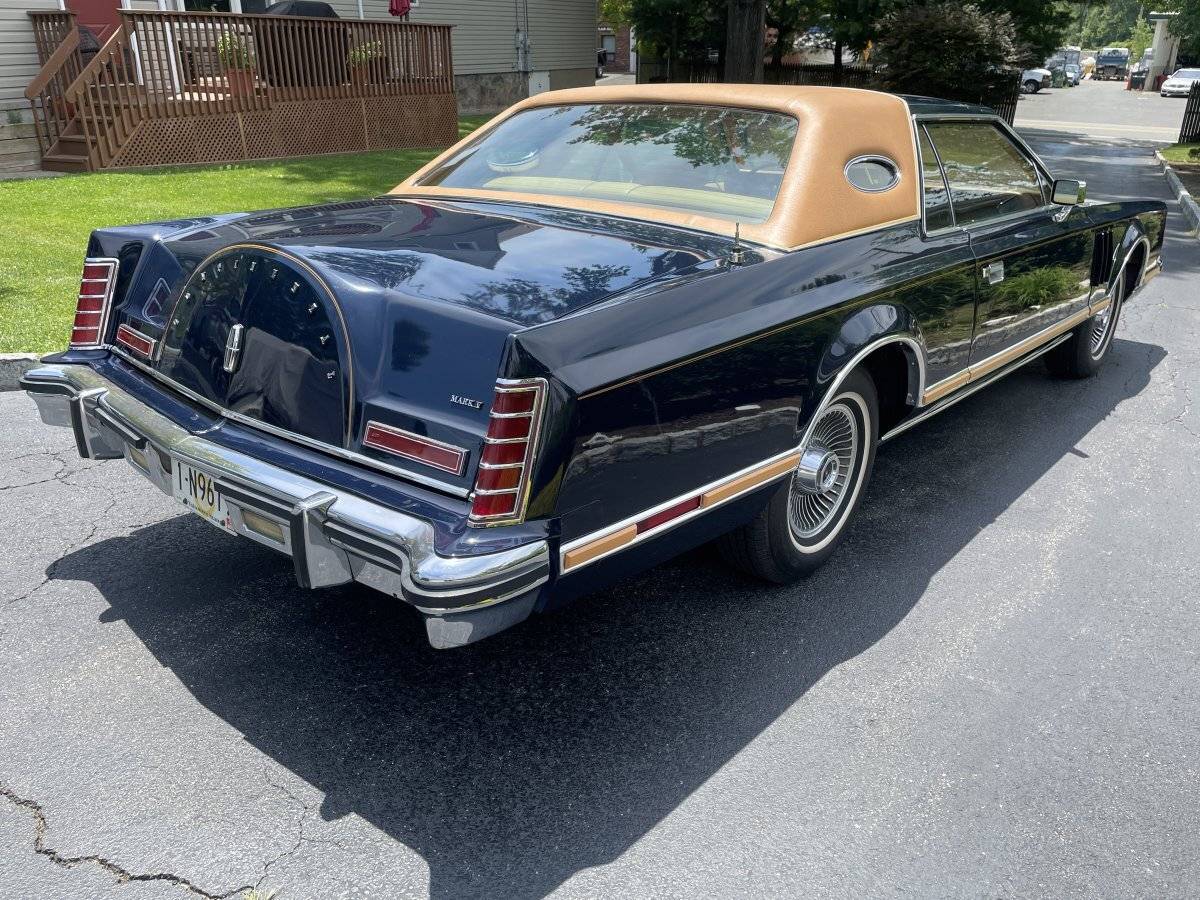 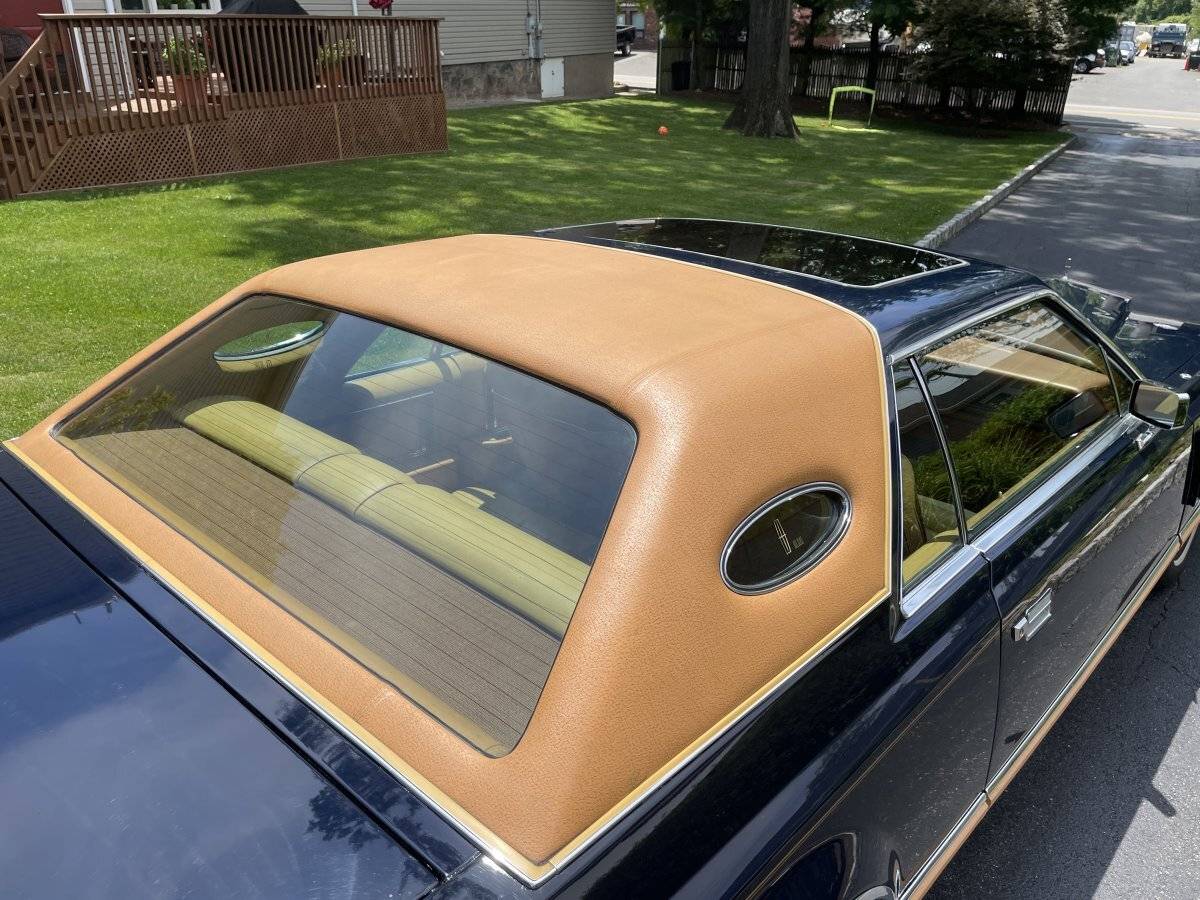 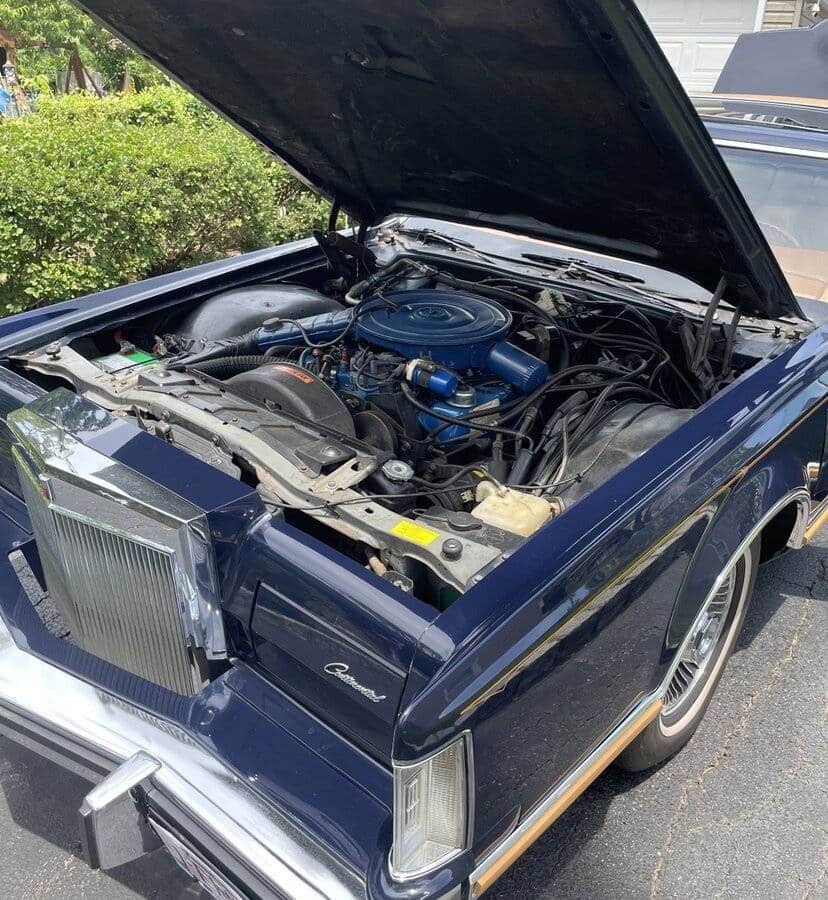 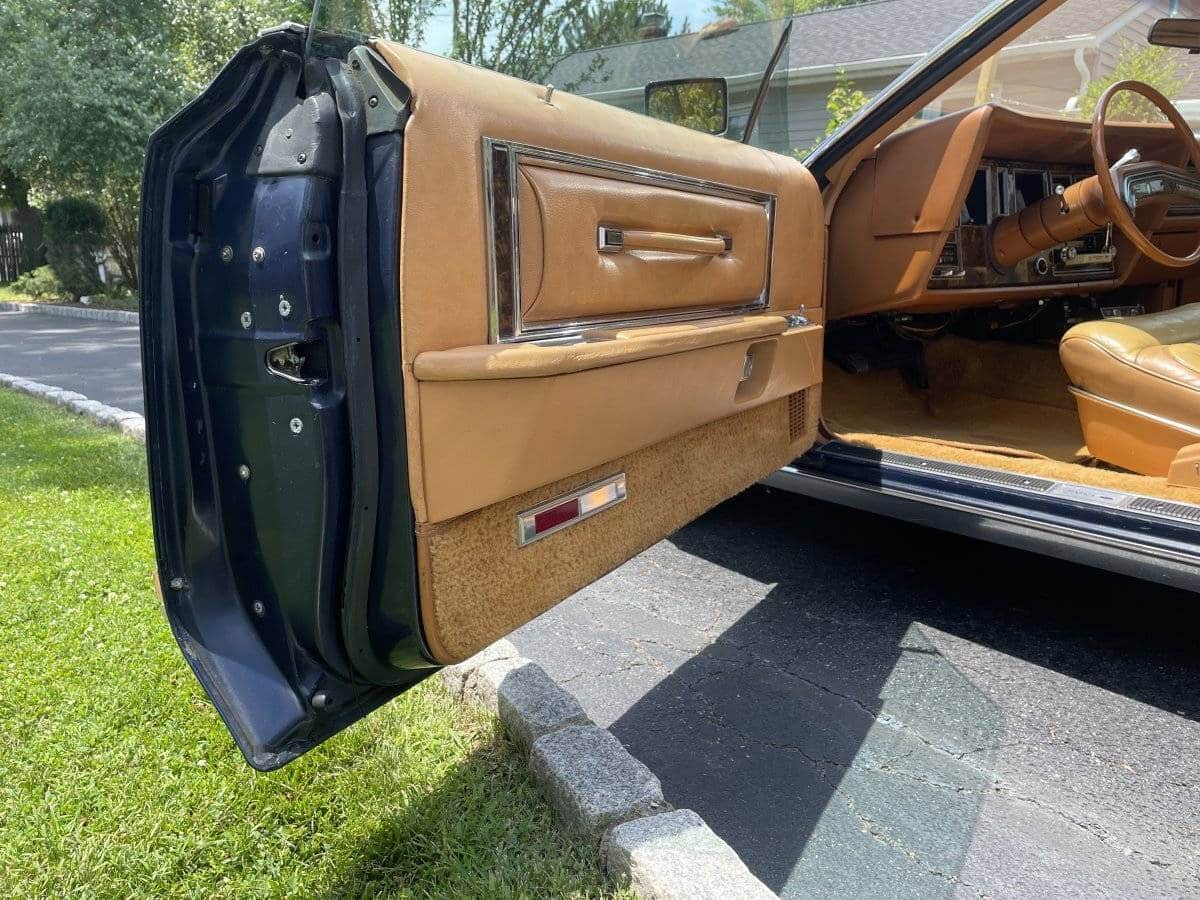 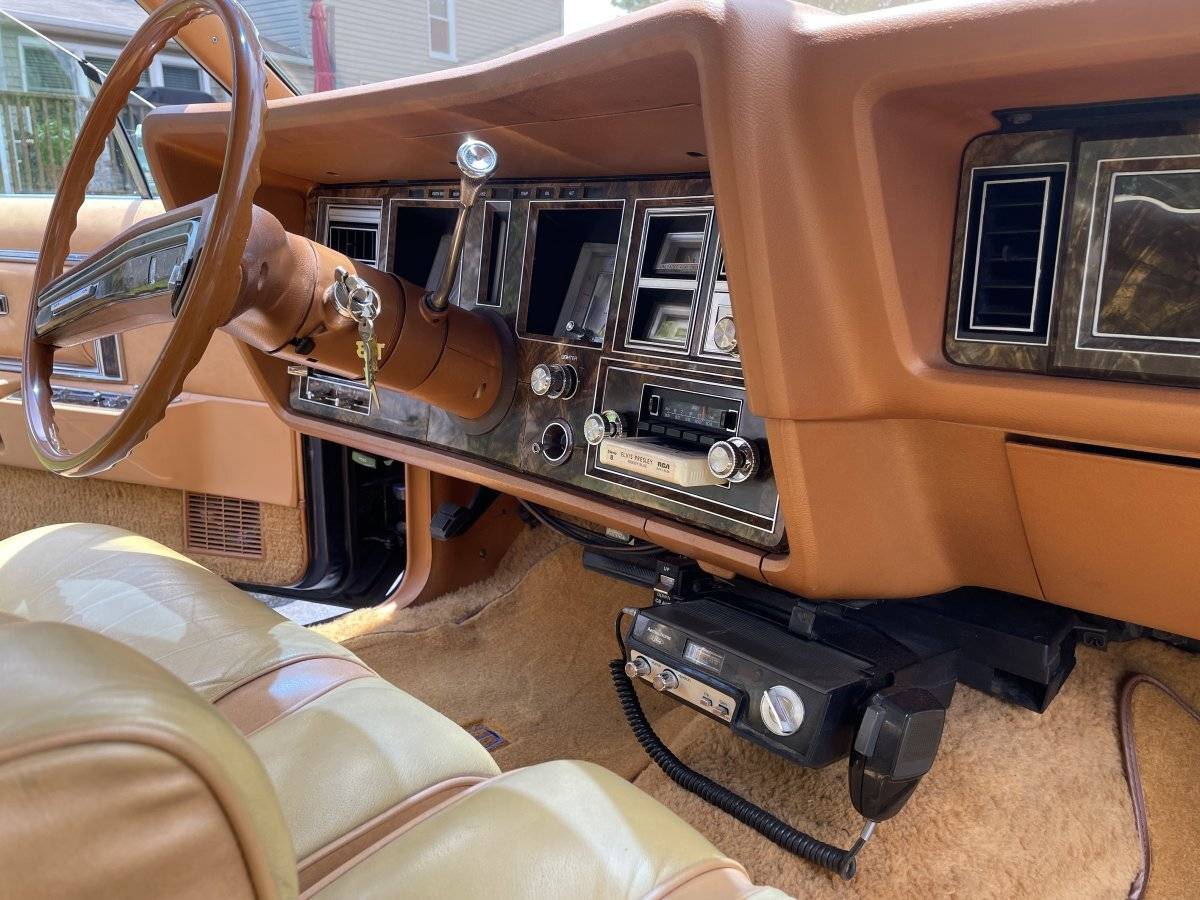 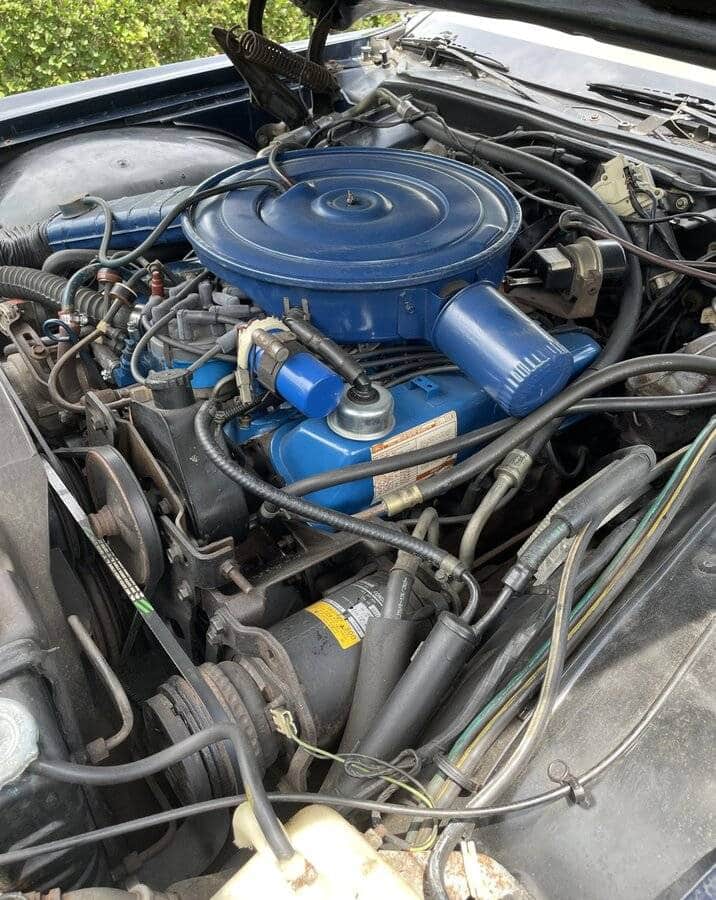 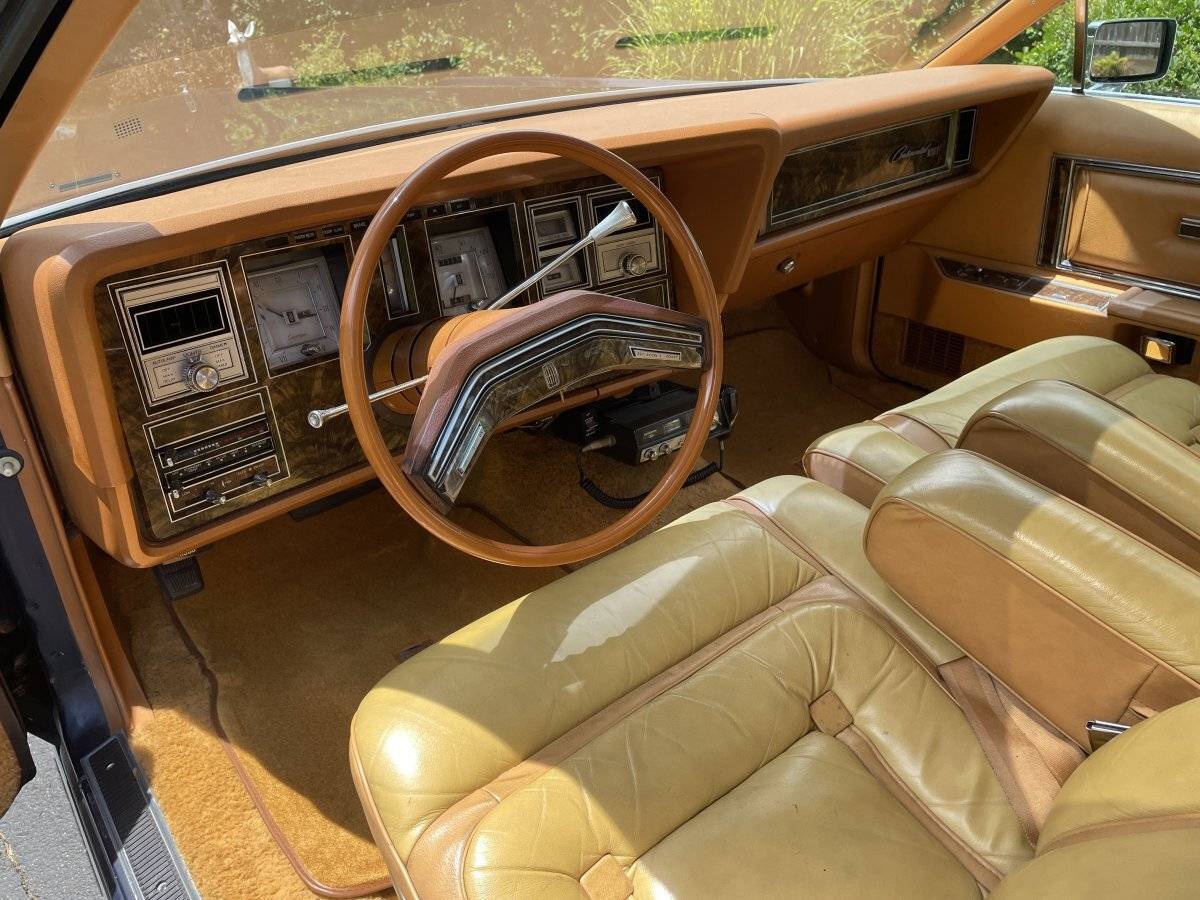 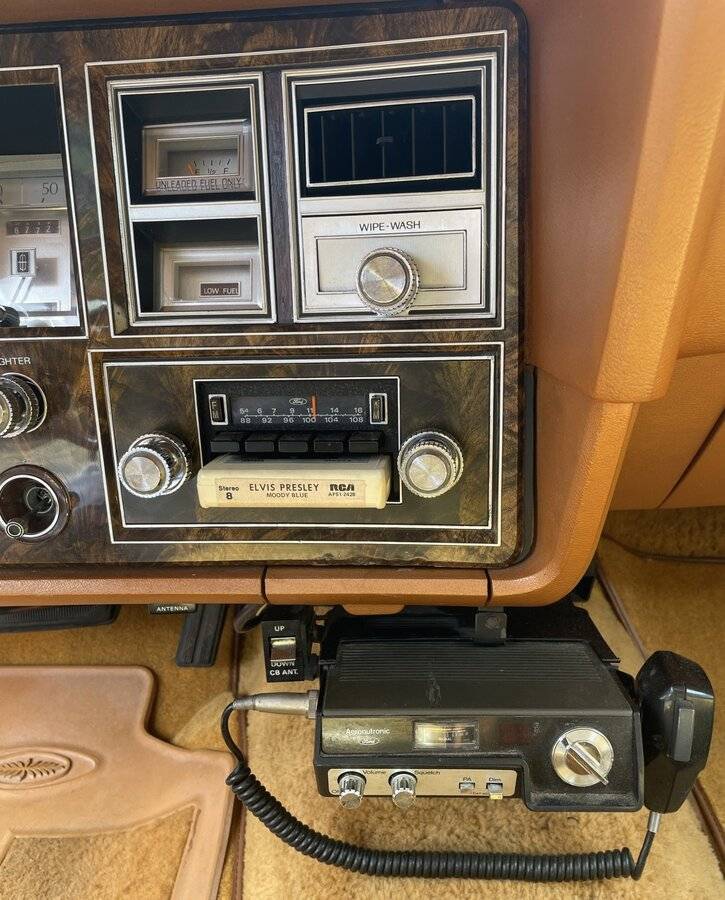 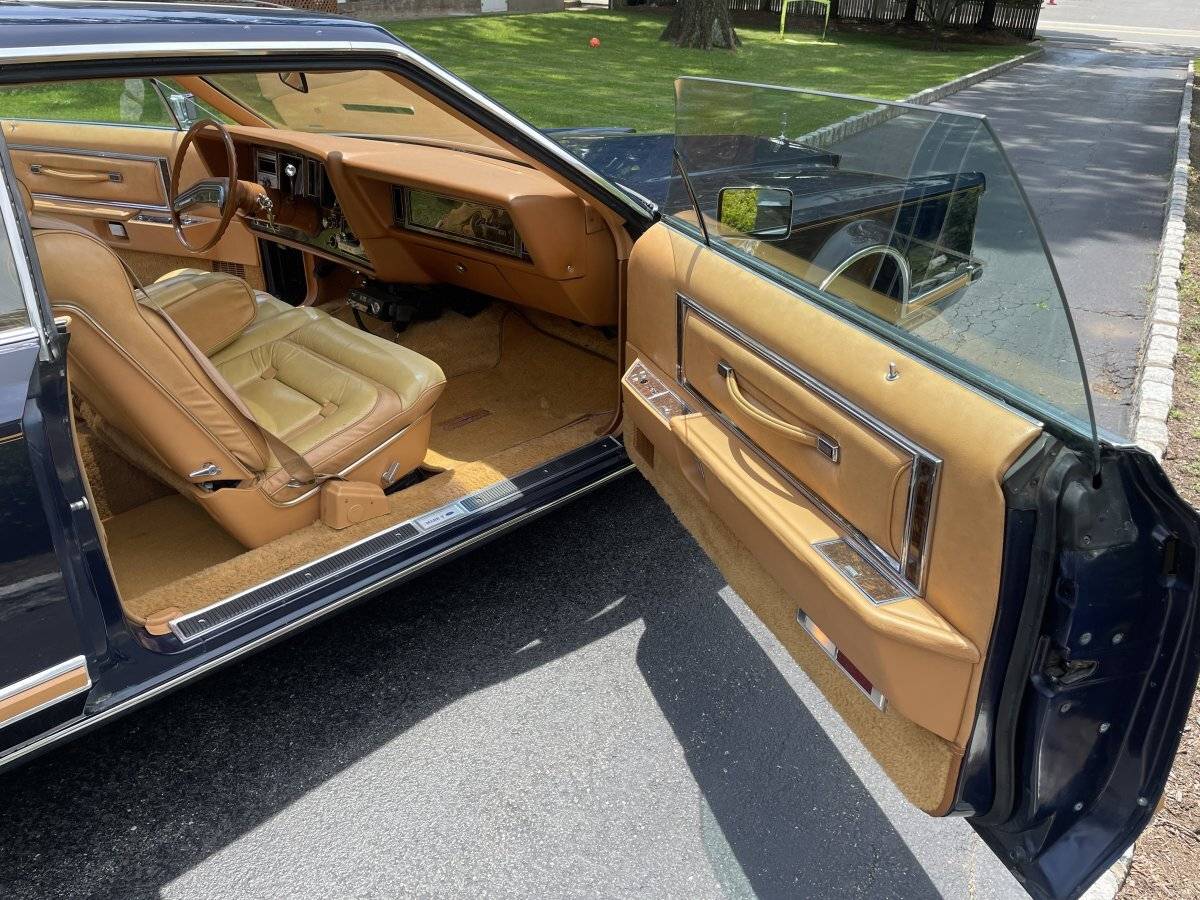 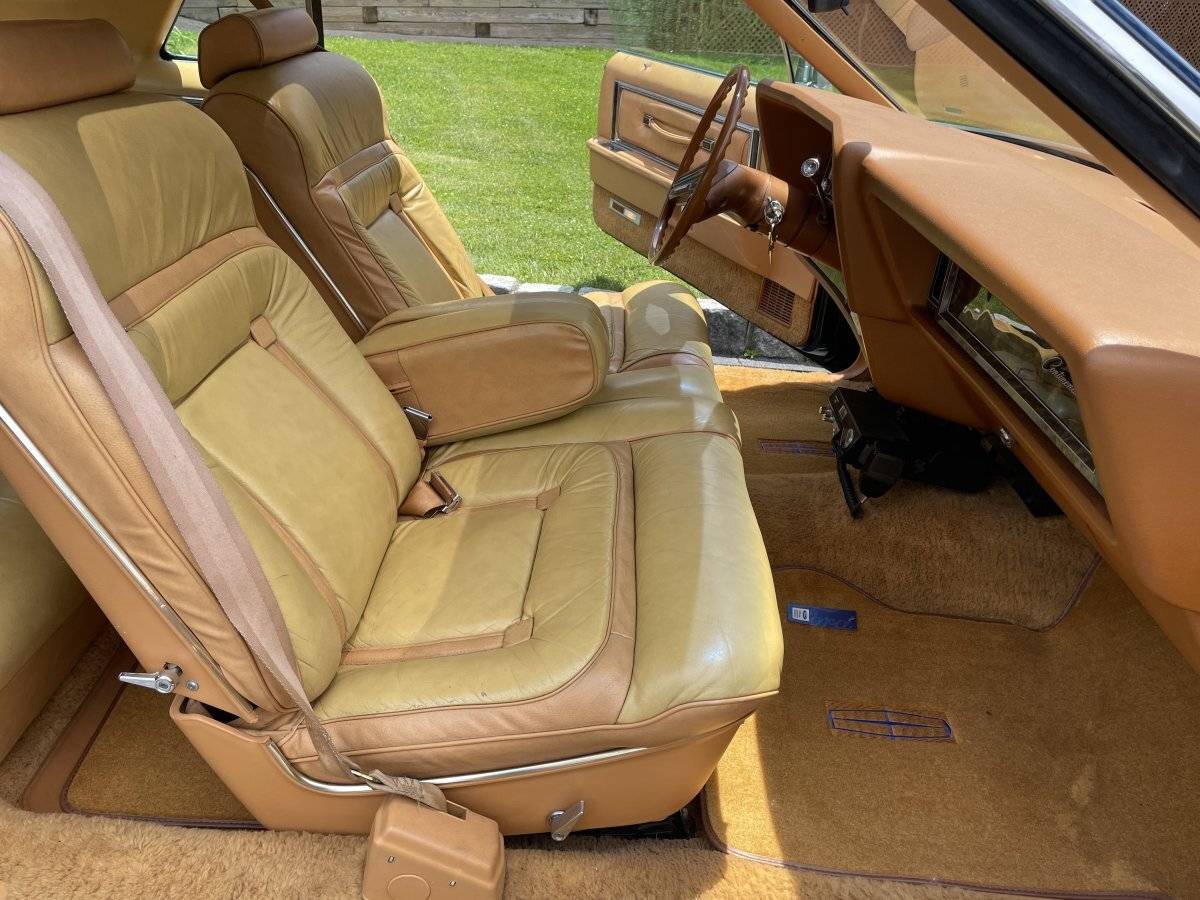 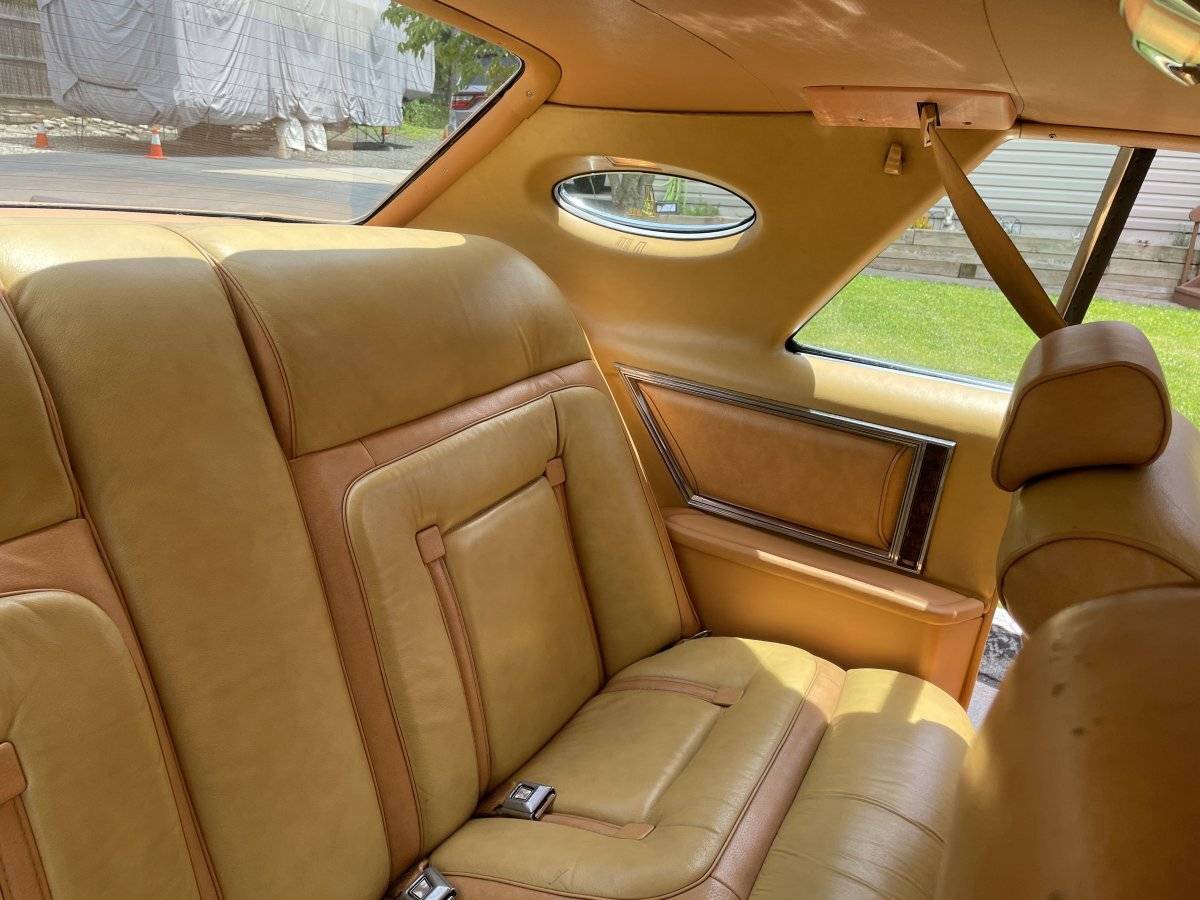 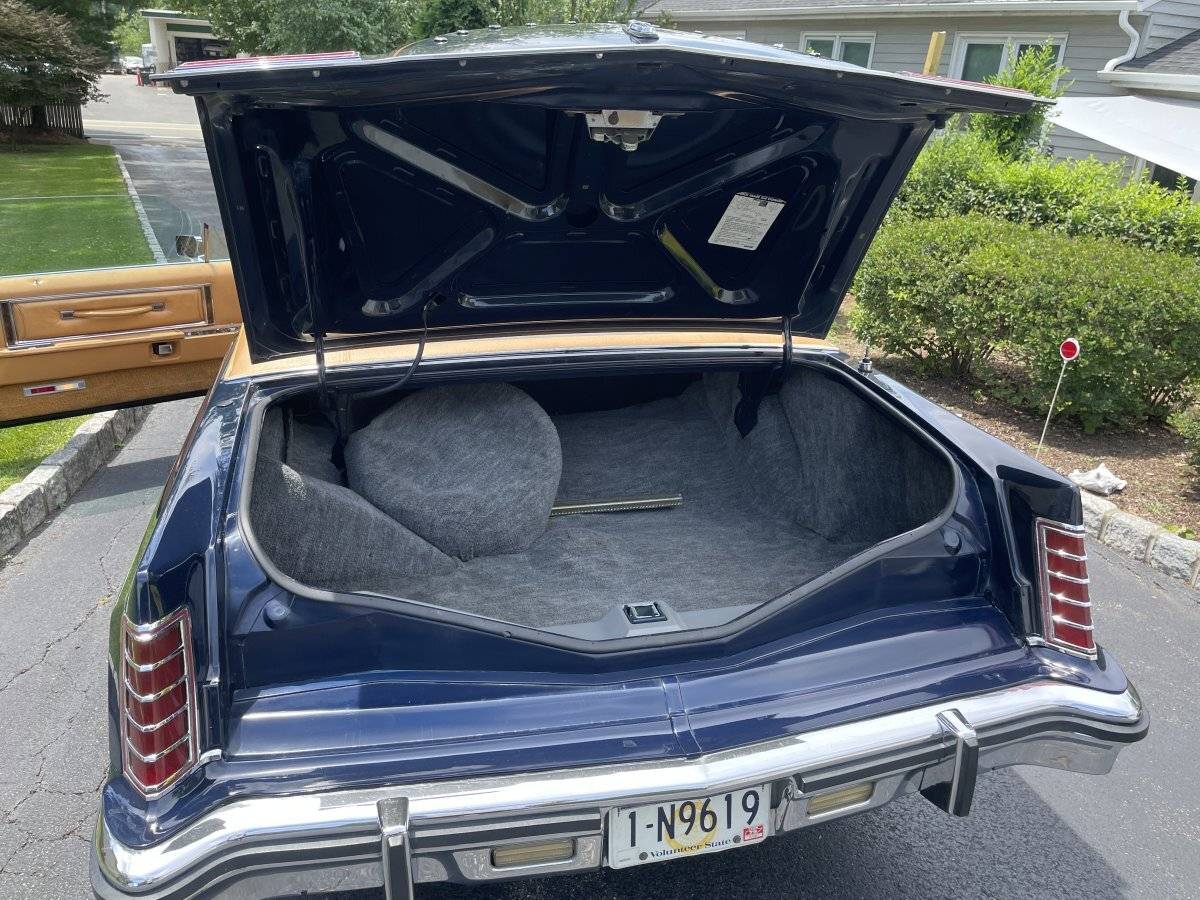 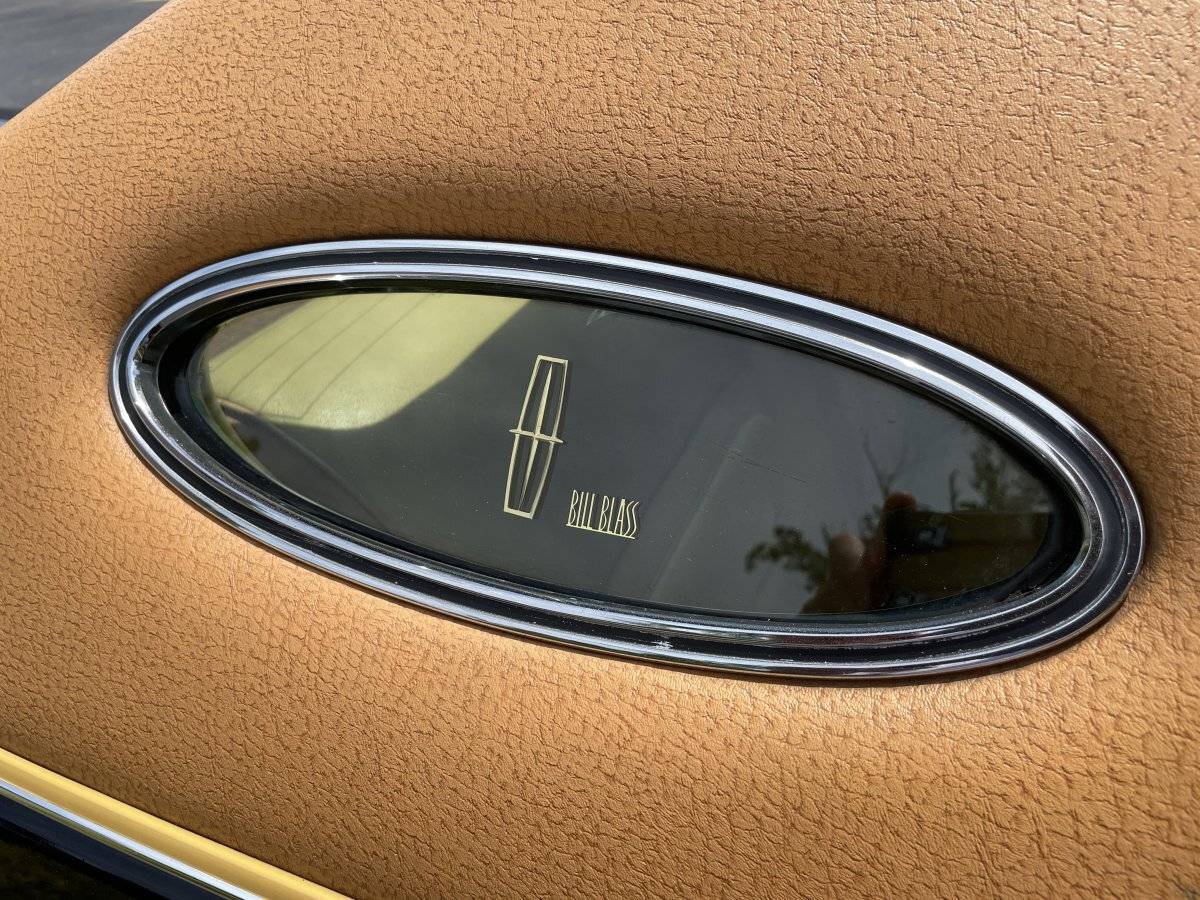 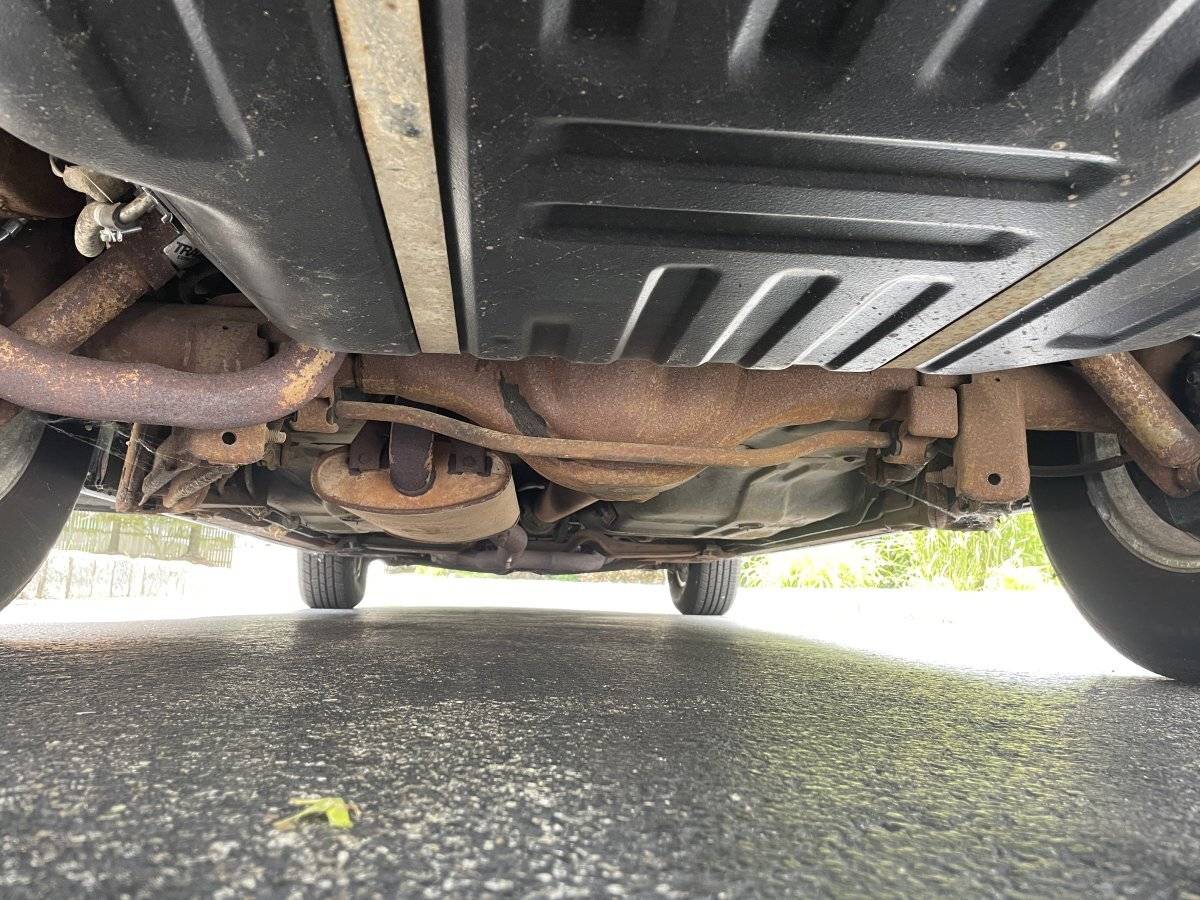 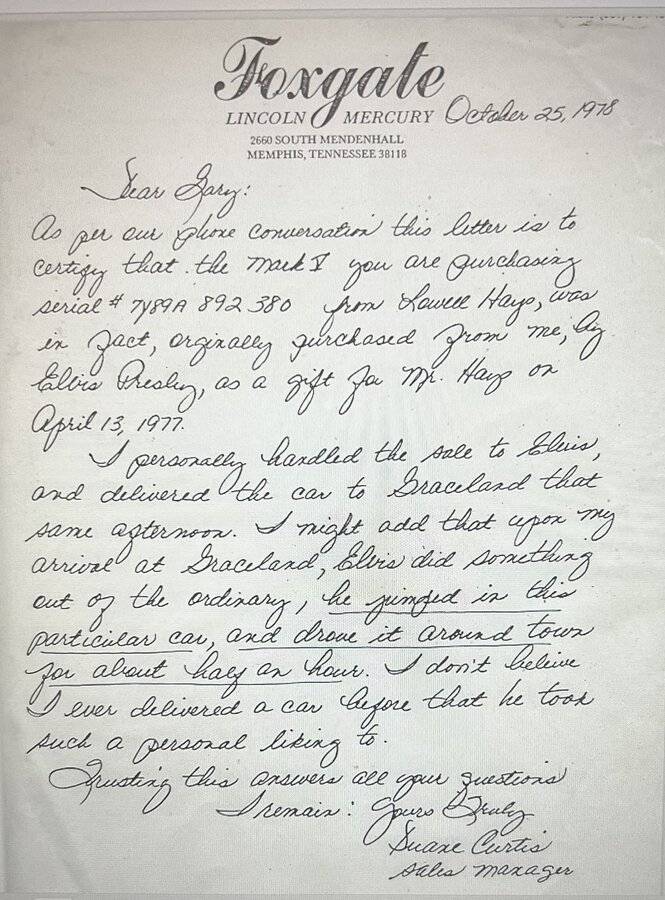 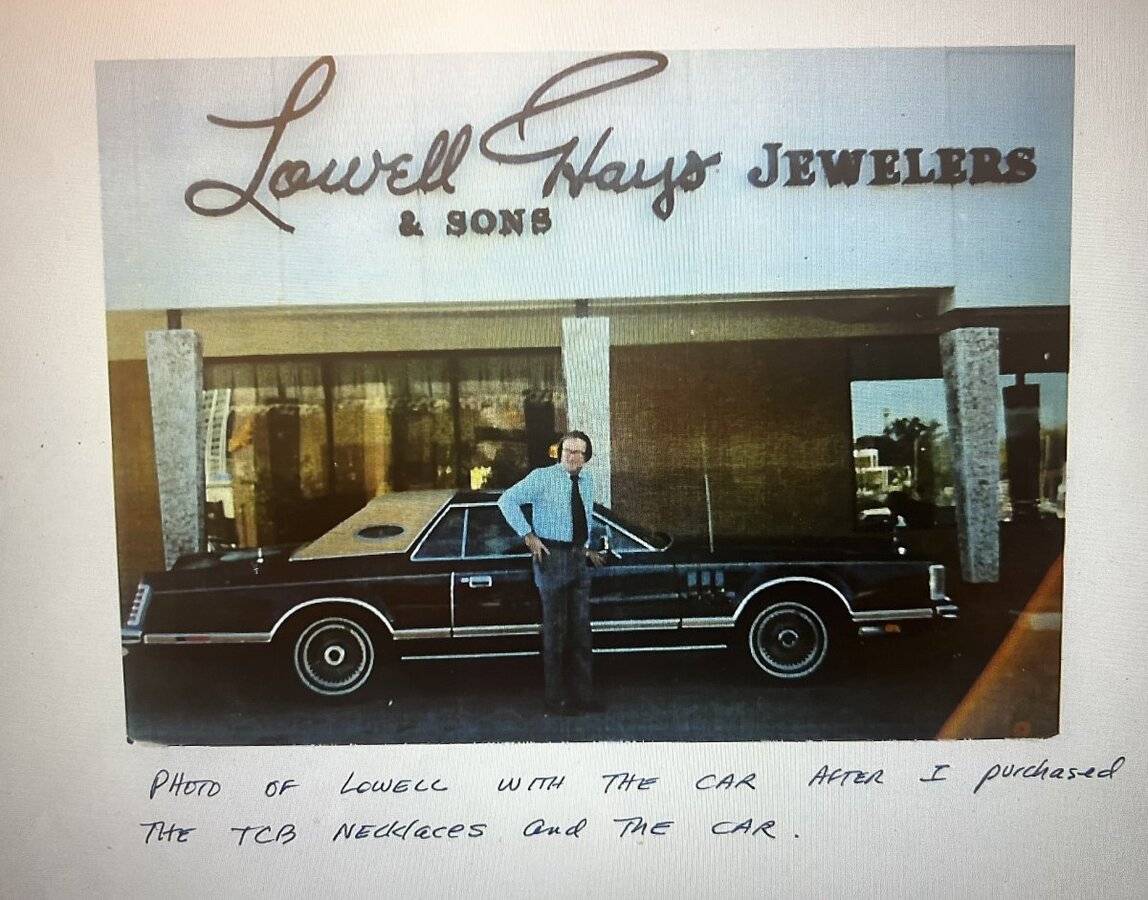 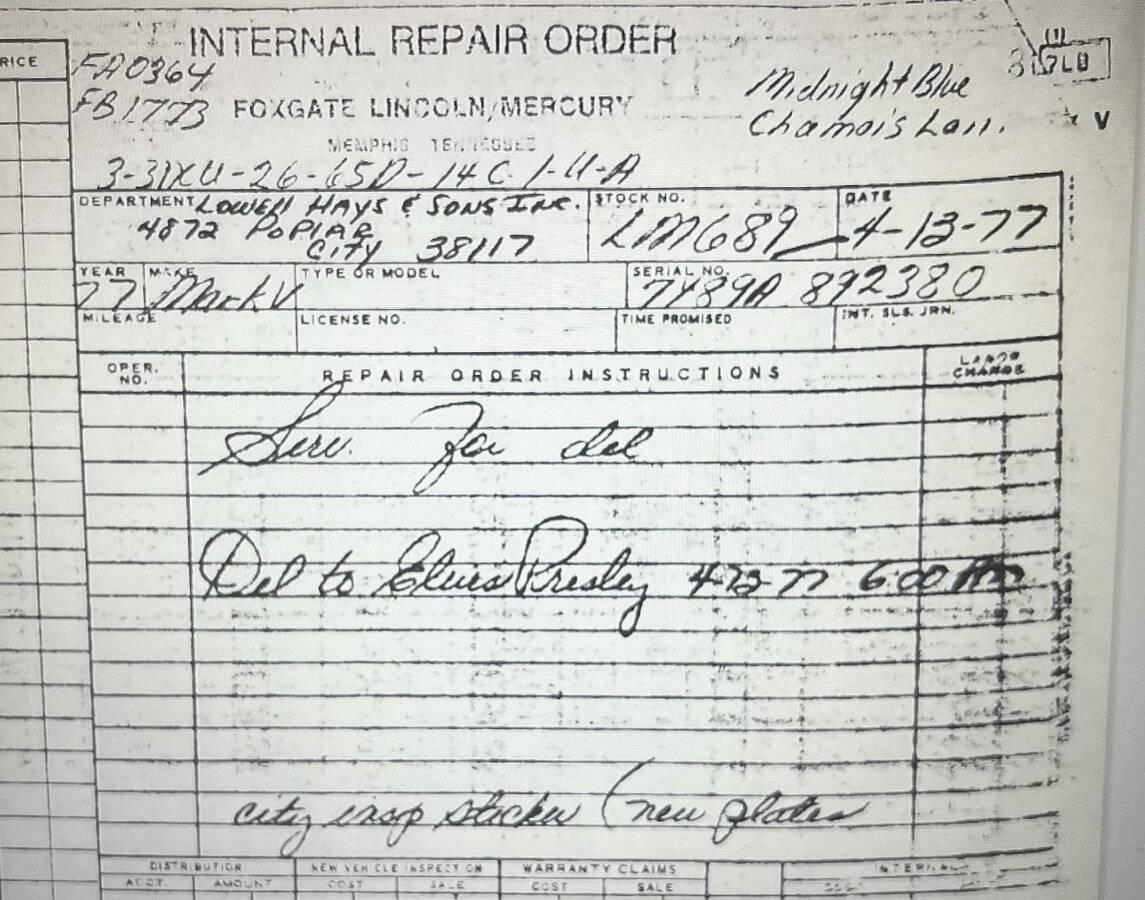 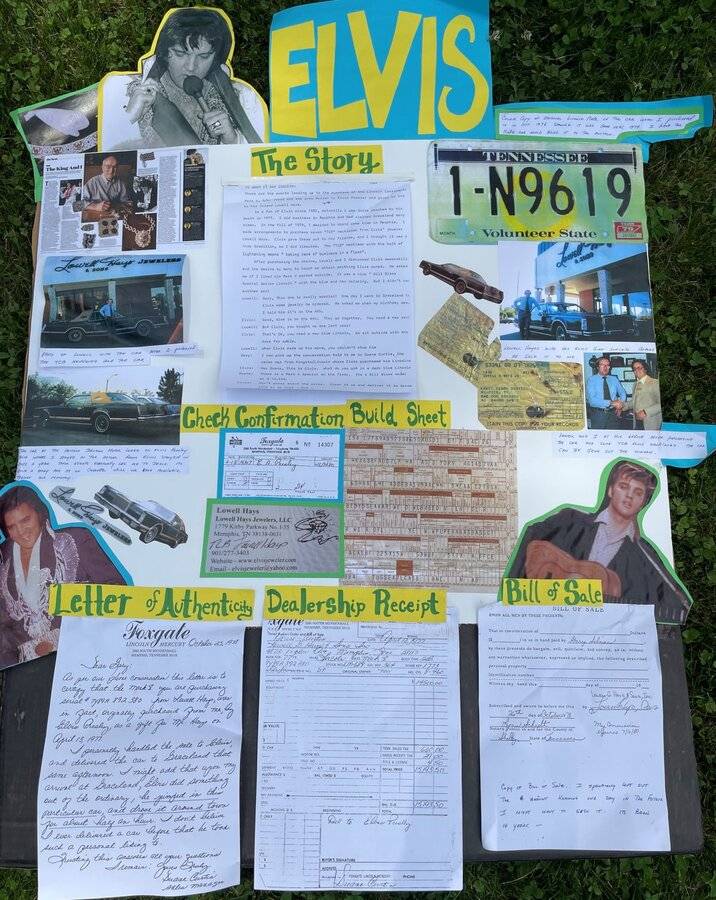 August 13, 2022, Update – We just confirmed the listing for this “Classifind” expired, so with no replacement found, we’re assuming this ride is “Sold?” While this one got away, please reach out either by email or call us directly if you’d like to be informed when we come across something similar.

August 16, 2022, marks the 45th anniversary of Elvis Pressley’s death.  After becoming a star, Elvis famously became a very generous person, often buying and giving expensive cars to friends and acquaintances alike.  The day’s question is whether the provenance of something Elvis purchased and drove still carries the provenance 45 years later to justify a premium price.

This highly optioned 1977 Lincoln Continental Mark V, originally listed in July 2022 on Craigslist in Closter, New Jersey, will be a good test.  Specifically, this car is a well-documented last purchase by Elvis shortly before his death.  You can read the detailed story in the seller’s description below; however, shortly after accepting delivery of the car and driving it just once, Elvis gifted the car to his jeweler.

Currently offered for $34,450, Classic.com, the analytics and search engine for the collector car market, confirms that while the ask is well above the one-year rolling average of this guide’s summary for 1977 Lincoln Continental Mark V’s, it would not be a record price.  By clicking on the green dots in the graph below, you can navigate to each comparable car sold as a way to help you evaluate the price of the truck featured here:

As a second data point, the  Collector Car Market Review Online Tool reveals the seller’s ask is double this guide’s #1 “Excellent” appraisal of $17,700 before making adjustments for the Bill Blass designer package (+10%) and the factory moonroof (+10%).

Previously standard issue on Marks III and IV, Ford’s 460 cubic inch V8, which became the industry’s largest available V8, was now optional for 1977, as a smaller 400 cubic inch V8 became standard. The 460 V8 was not available at all on Mark V in the state of California, as the power plant was unable to meet that state’s tougher EPA certification standards. Lincoln felt so bad about this, that for 1977 only, California-bound Mark Vs were offered with the newly optional turbine-style aluminum wheels as standard equipment, to compensate for their 460-less Californian clientele.

Also, 1977 was the first year since 1960 that a Mark-series model came with an all-metal, body-color painted (non-vinyl covered) roof as standard equipment. The full-vinyl roof – previously standard on Mark IV – was now optional, as was the rear-quarter Landau roof.

Mark IV’s successful Designer Series Editions continued with revised color combinations on the new Mark V, as well as revised Luxury Group Option color trim packages. First available in mid-1975, as the “Versailles Option”, a renamed-for-1977 “Majestic Velour Luxury Group” carried over to the Mark V – for 1977 only (minus the upper door trim panel wood-tone moldings – which were on Mark IV with the Versailles option). The returning Gold/Cream and new Cordovan Luxury Groups came with an available unique (small block pattern) “Romano Velour” on the seat pillow inserts and matching upper door panel inserts – this too was also a relatively rare 1977-only one-hit-wonder.

The Shooting Cars YouTube Channel features this modern road test video of what its like to drive a Lincoln Continental Mark V in modern times:

The Elvis purchase and one drive provenance aside, this 1977 Lincoln Continental Mark V appears to be a well-optioned and nicely detailed survivor example.

“ELVIS is in the house! There is a connection to this beautiful time capsule, a fully loaded 1977 Lincoln Continental Mark V – “Bill Blass Designer Edition”. Here we go …. as per documentation provided this car was purchased new in 1977 by Elvis Presley himself from Foxgate Lincoln Mercury (Memphis TN, – of course). The car was an immediate purchase request by Elvis directly to the dealership and as a birthday gift to Elvis’s personal jeweler – the famed Lowell Hays. Duane Curtis (Sales Mgr. at Foxgate Lincoln Mercury) personally delivered the car quickly to Grace-land and there is documented testimony from him that Elvis quickly grabbed the keys and enjoyed a drive just prior to gifting it to his good friend Lowell. As per Duane this Lincoln was the last car purchased by Elvis from the Foxgate dealership, and as we all know Elvis died shortly after. The car remained with Lowell Hays through the fall of 1978, then sold to Gary Selman who was an avid Elvis collector and documented Elvis Memorial member. Gary was diligent to research and gather as much documentation as possible in a binder for this vehicle as well as having the car relocated to the northeast. In 2015 the car was purchased by its current owner who owns a modern and classic auto repair shop where it has received great care and continued to share its history. Post “Mark 111” and “Mark IV”, most might know this series “Mark V” of Lincoln as the crème de la crème (best of the best) of domestic cruisers of the 70’s, highly optioned and available with special order designer editions such as this one being the “Bill Blass” Edition. Mark V marked the peak of Lincoln Luxury, engineering and performance of the decade, this one has it all. This crème puff is powered by the large 460 Cid/208Hp V8 mated with its 3-speed automatic transmission with all accessories including AC of course. In full Bill Blass attire this Lincoln holds the Cartier Clock, AM/FM 8-Track, Leather interior, factory-installed CB, Power windows, Power Seats, Power Trunk, Cruise Control, Power Glass Sunroof and Cold AC (R12). Everything in this vehicle functions including the hideaway headlight doors. The car currently shows 67,727 original miles and is in amazing condition with no signs of any previous body work or finish repair. Mechanically the car has received an engine top-end overhaul with factory-style components including a tune up and fluid changes. This car literally floats down the road in true Lincoln fashion and certainly attracts attention with its polished exterior shine. Grab your “Blue Suede Shoes”, open the Sunroof, turn up the ELVIS 8-Track and have some fun sharing the story behind this classic. This vehicle would also make a great addition to any automotive collection especially ones linked to Elvis or the Music Industry. This vehicle is located in Northern, NJ.“

Show or go: What would you do with this Elvis-purchased 1977 Lincoln Continental Mark V?  Please comment below and let us know!