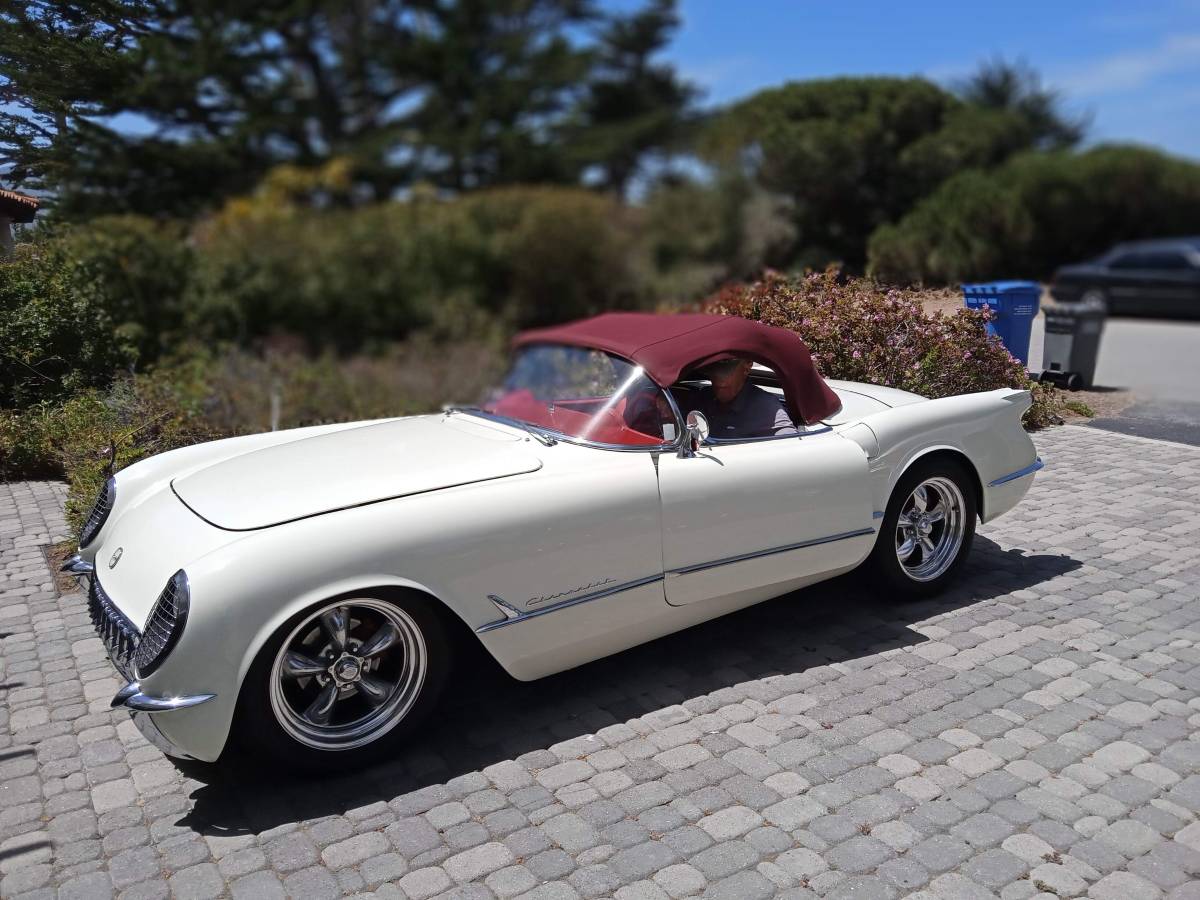 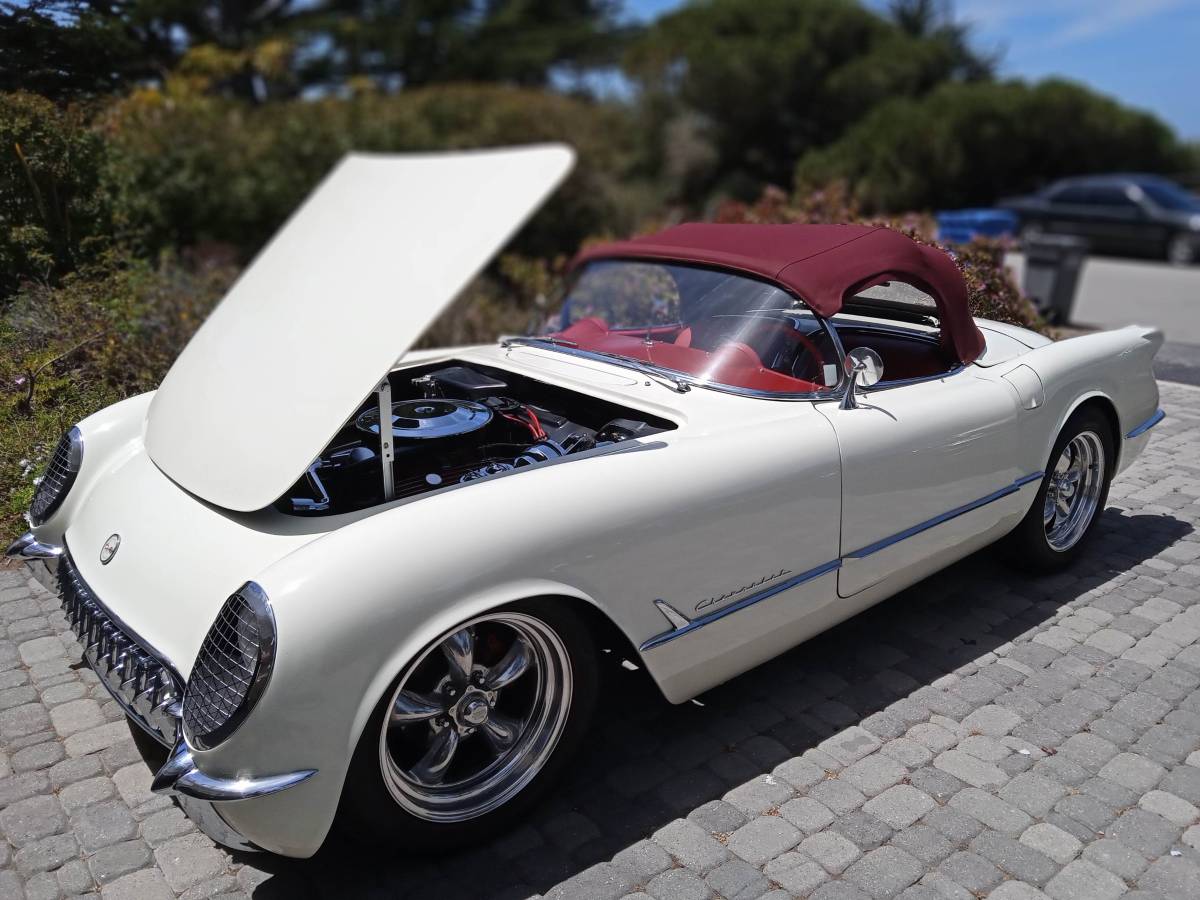 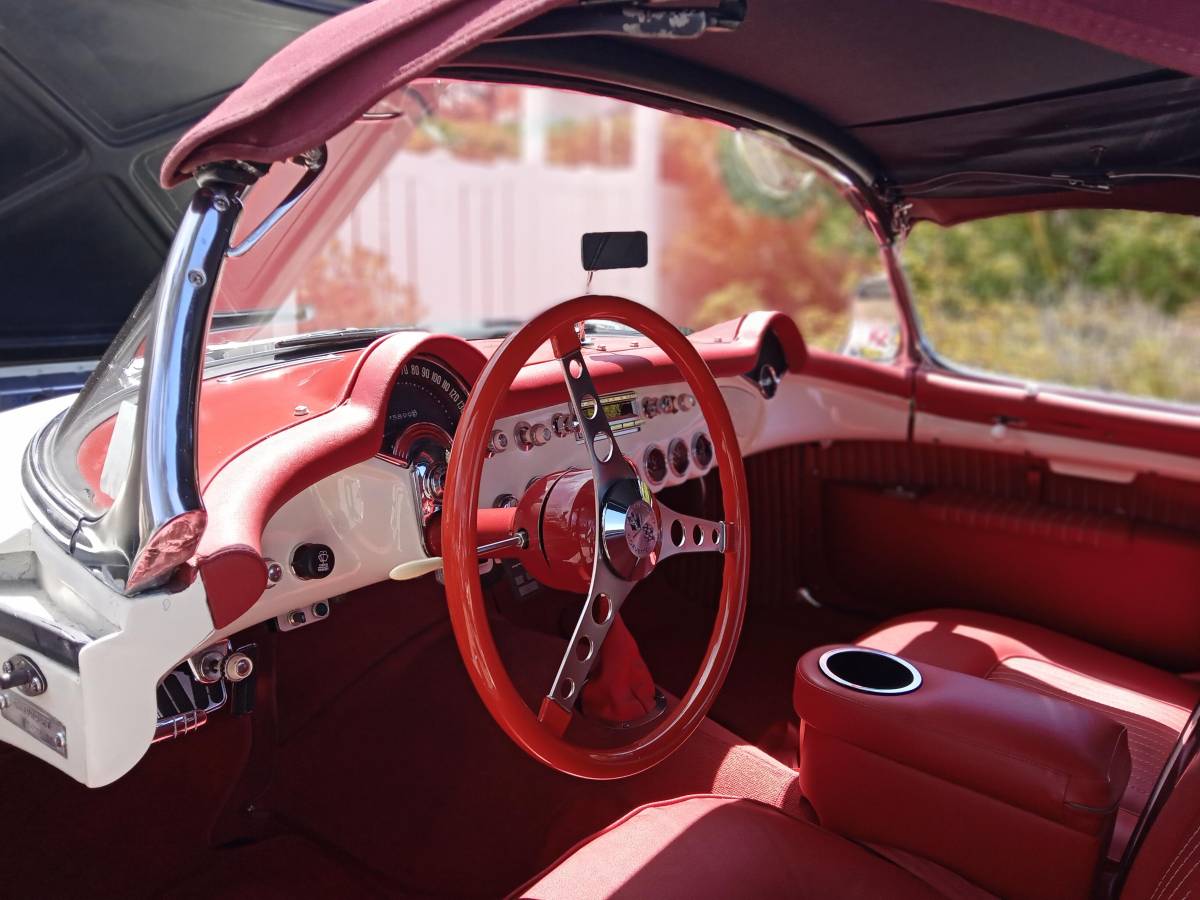 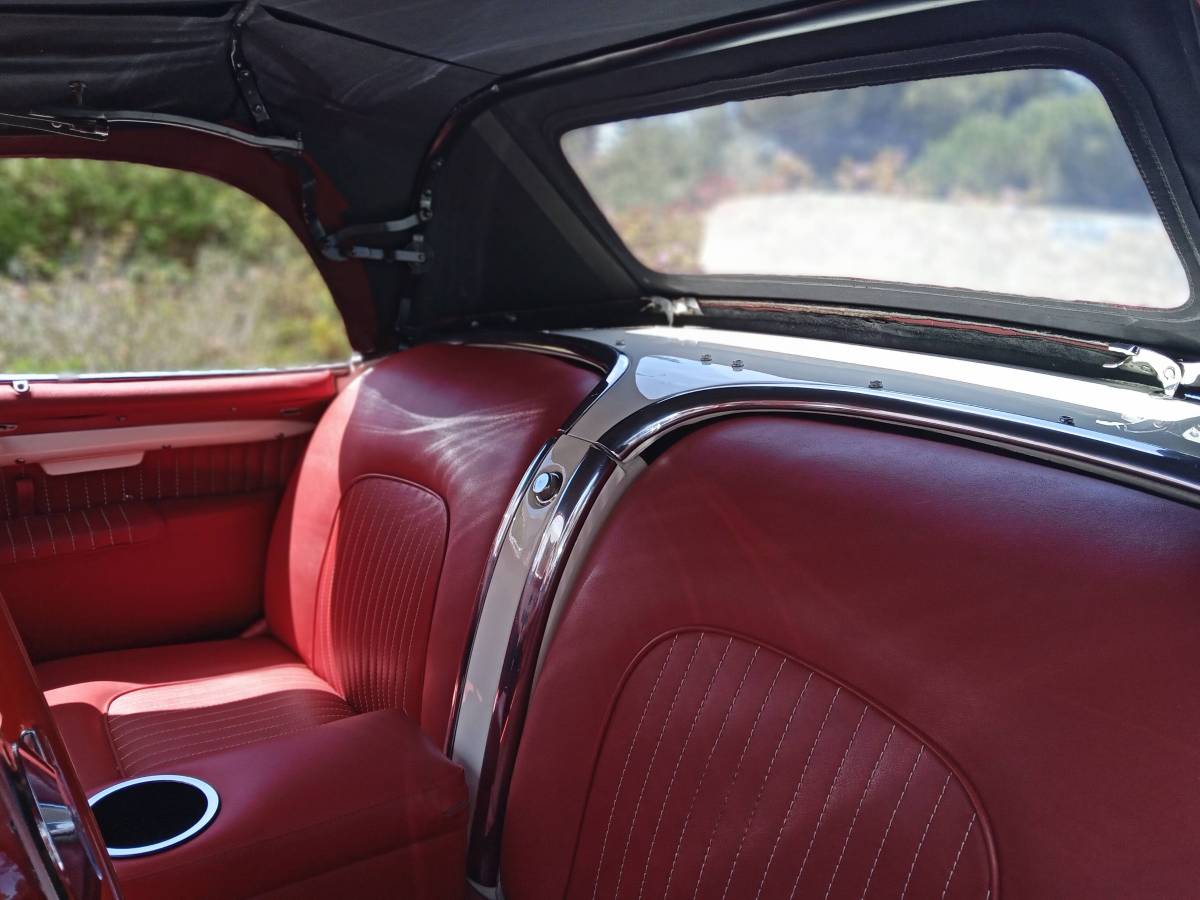 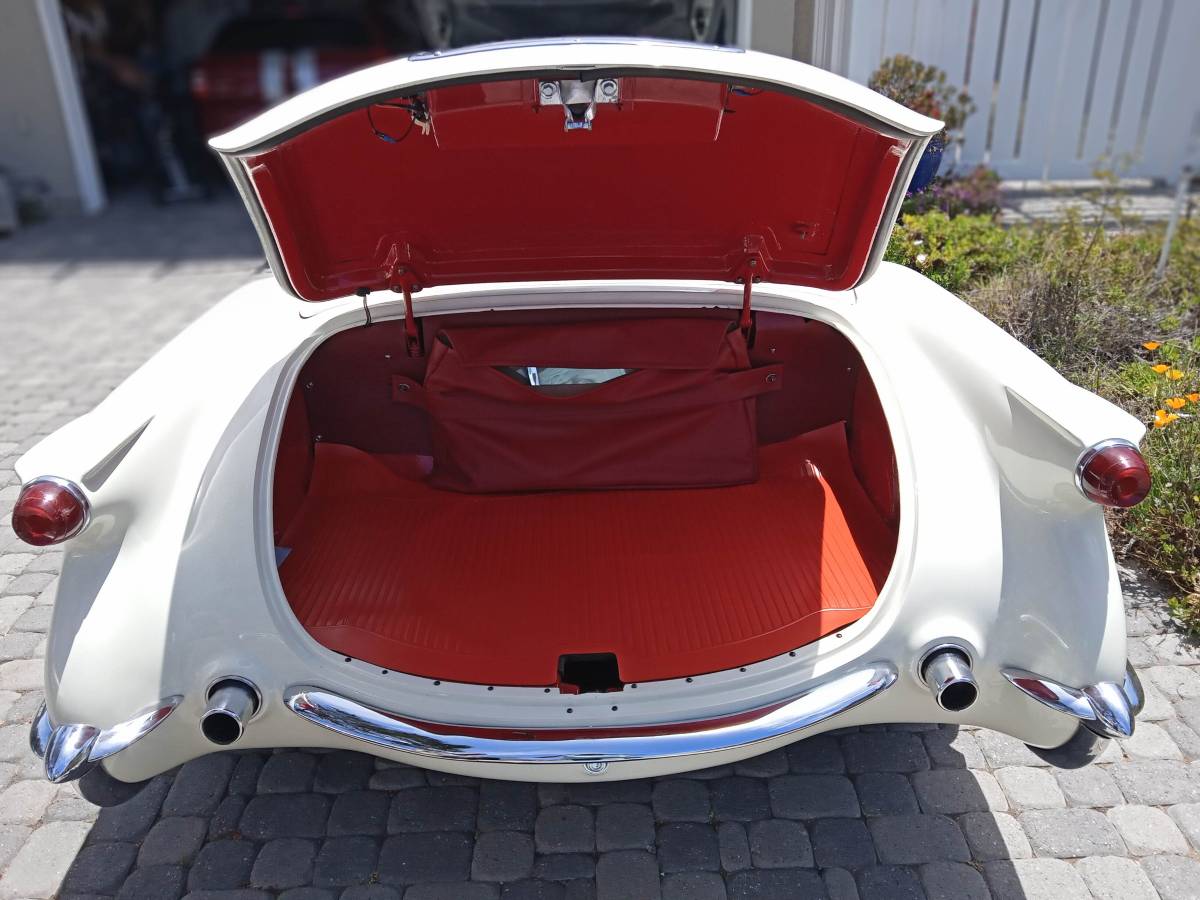 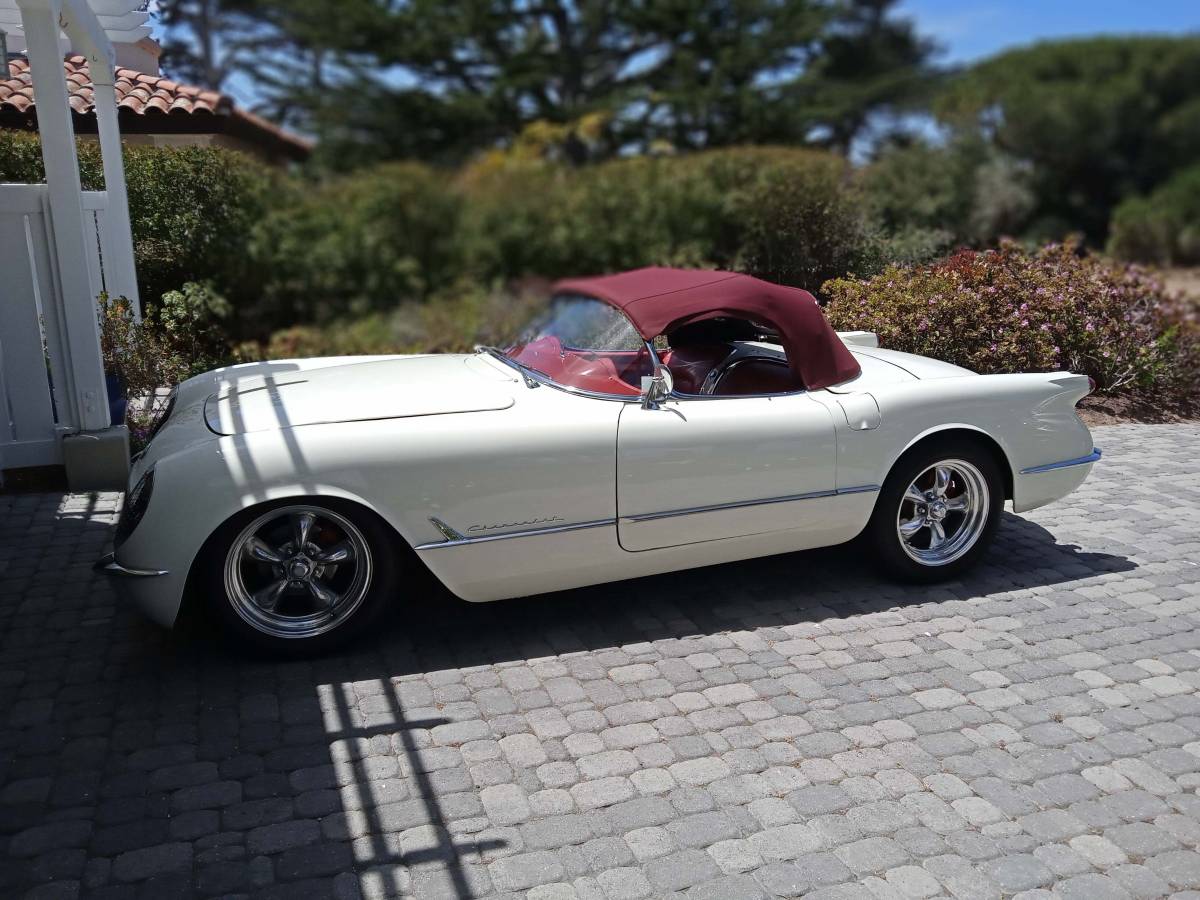 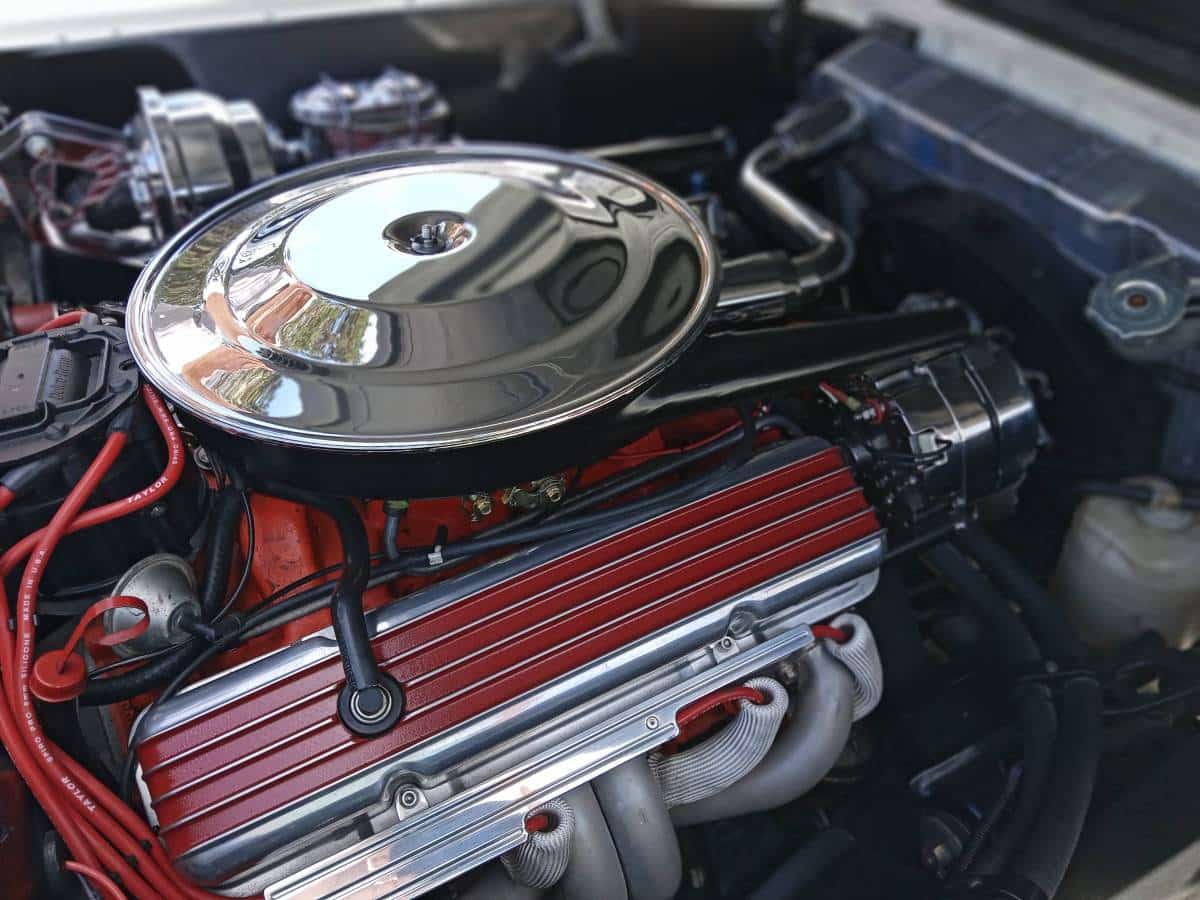 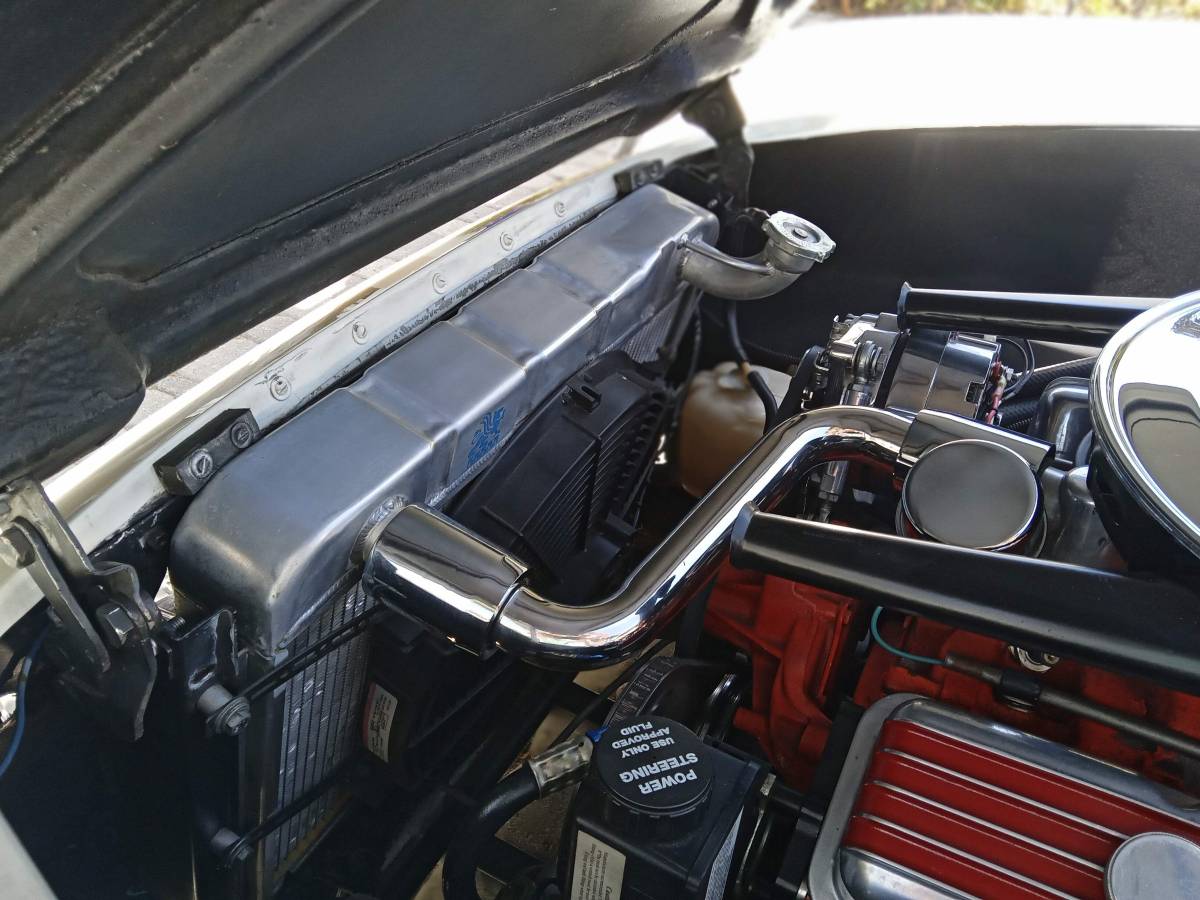 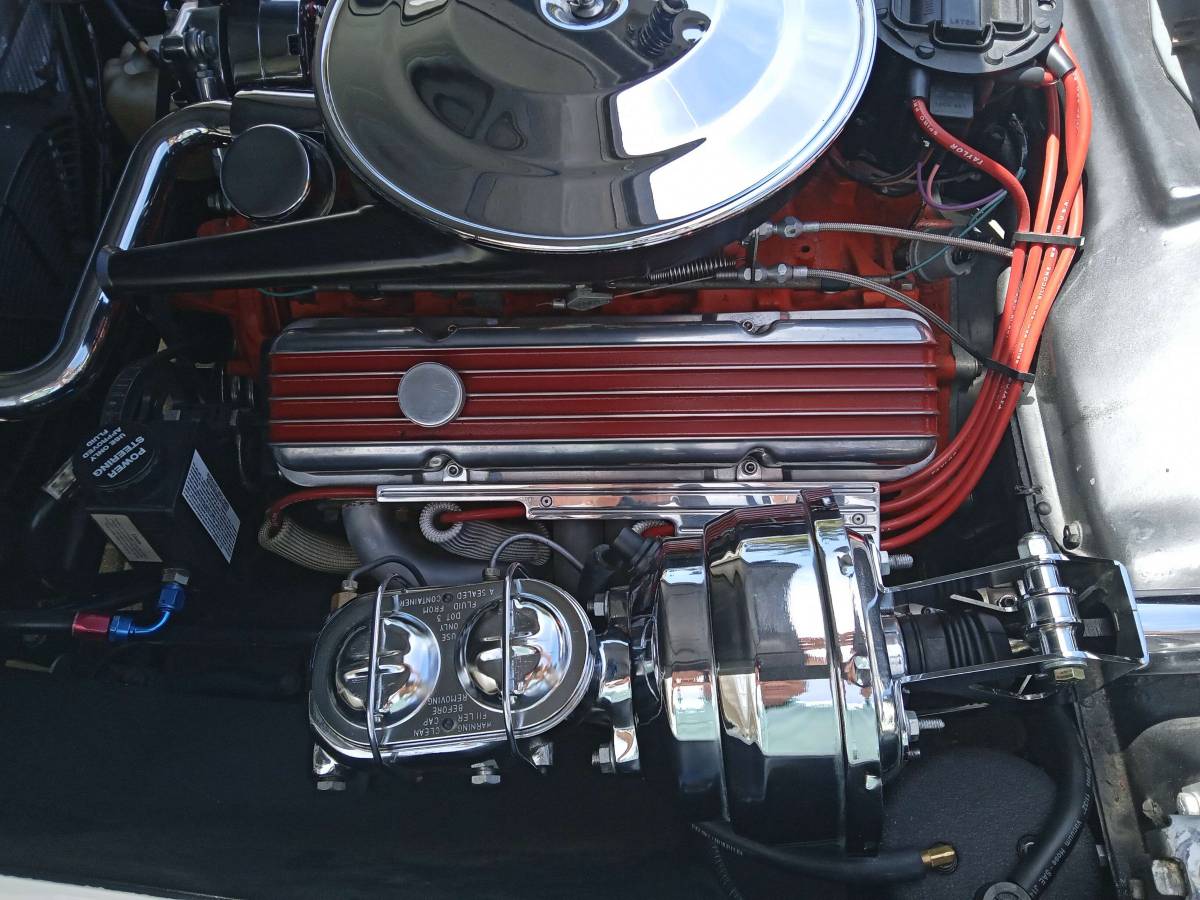 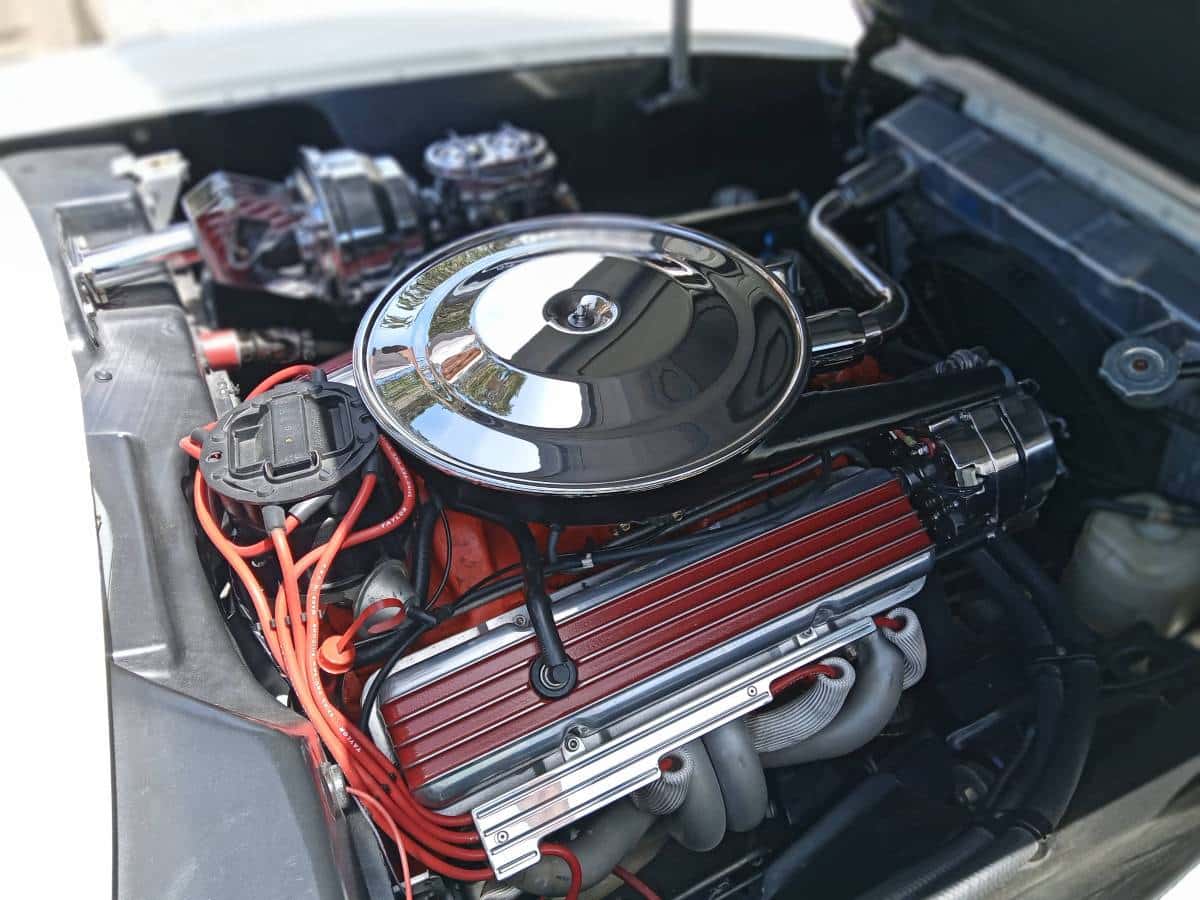 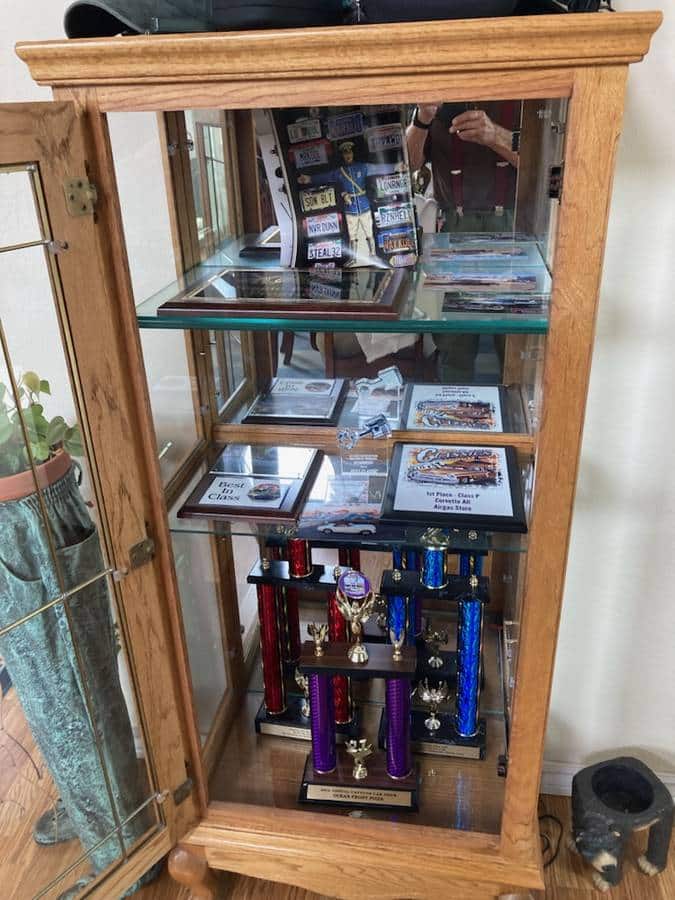 September 9, 2022, Update – We just confirmed the listing for this “Classifind” expired, so with no replacement found, we’re assuming this ride is “Sold?” While this one got away, please reach out either by email or call us directly if you’d like to be informed when we come across something similar.

1954 was the second model year of production for the Chevrolet Corvette.  After managing to hand-build only 300 white examples for the launch year, Chevrolet production engineers were getting more comfortable handling and painting the then-exotic fiberglass body material. As a result, production increased twelvefold in 1954, with 3,640 units produced. Despite the higher production volume, the Blue Flame inline-six mated to a two-speed Powerglide automatic transmission was not exactly the stuff of high performance, so many of these second-year Corvettes ended up getting stuffed with a more proper V8.  This Polo White over red 1954 Corvette, originally listed in August 2022 on Craigslist in Dallas, Texas, benefits from a multiple award-winning restomod build that swapped out the original powertrain with a brand new 290 horsepower 350 cubic inch small block mated to a 700R4 automatic.

Currently offered for $180,000, Classic.com, the analytics and search engine for the collector car market, confirms the ask would be a new record based on the current one-year rolling average of this guide’s summary for 1954 Corvettes.  Considering we watched a stock Polo White over Red 1954 Corvette cross the Mecum Monterey 2022 auction block for a winning bid of $62,000, potential buyers need to decide whether the quality of the build and the suspension has been modernized enough to justify a $120,000 premium.  By clicking on the green dots in the graph below, you can navigate to each comparable car sold as a way to help you evaluate the price of the truck featured here:

As a second data point, the  Collector Car Market Review Online Tool reveals the seller’s ask falls well above this guide’s #1 “Excellent” appraisal of $102,000. The premium requested here is for the restomod build.

Chevrolet introduced its legendary Corvette sports car late in the spring of 1953.  With several styling changes, Chevrolet produced the first and only solid axle “C1” generation of Corvette through the 1962 model year.  Chevrolet rushed the Corvette into production for its debut model year to capitalize on the enthusiastic public reaction to the concept vehicle, but expectations for the new model were largely unfulfilled.  Reviews were mixed, and sales fell far short of expectations through the car’s early years. The program was nearly canceled, but Chevrolet decided to make necessary improvements.

As head of GM’s Styling Section, Harley Earl was an avid sports car fan. He recognized that GIs returning after serving overseas in the years following World War II were bringing home MGs, Jaguars, and Alfa Romeos. In 1951, Nash Motors began selling an expensive two-seat sports car, the Nash-Healey, that was made in partnership with the Italian designer Pininfarina and British auto engineer Donald Healey, but there were few moderate-priced models.  Earl convinced GM that they needed to build an all-American two-seat sports car, and with his Special Projects crew, began working on the new car in late 1951.

GM executive Robert F. McLean mandated off-the-shelf mechanical components and used the chassis and suspension design from the 1949–1954 Chevrolet passenger vehicles to keep costs down. The drivetrain and passenger compartment were moved rearward to achieve a 53/47 front-to-rear weight distribution. It had a 102 inch wheelbase. The engine was a higher-compression, 150-horsepower version of the 235 cubic inch inline-six “Blueflame” engine that powered all other Chevrolet car models. In addition to its higher compression ratio, the Corvette’s engine featured three Carter side-draft carburetors, mechanical lifters, and a higher-lift camshaft. At launch, Chevrolet did not have a manual transmission capable of handling the motor’s higher horsepower.  Consequently, early Corvettes only came equipped with a two-speed, floor-shifted Powerglide automatic.

The 1953 model year was not only the Corvette’s first production year, but at 300 produced, it was also the lowest-volume Corvette. The cars were essentially hand-built and techniques evolved during the production cycle so that each 1953 Corvette is slightly different. All 1953 models had Polo white exteriors, red interiors, and black canvas soft tops. Order guides showed heaters and AM radios as optional, but all 1953 models were equipped with both. C1 Corvettes featured an independent front suspension with a rigid axle supported by longitudinal leaf springs at the rear. The first production Corvettes cost in 1953 was $3,490.

The quality of the fiberglass body and its fit and finish were lacking. Other problems, such as water leaks and doors that could open while the car was driven, were reported with the most severe errors corrected in subsequent units produced, but some shortcomings continued beyond the Corvette’s inaugural year. By December 1953, Chevrolet had a newly-equipped factory in St. Louis ready to build 10,000 Corvettes annually. However, negative customer reactions in the 1953 and early 1954 models caused sales to fall short of expectations.

In 1954, Chevrolet built only 3,640 Corvettes, and nearly a third were unsold at year’s end. New colors were available, but the six-cylinder engine and Powerglide automatic, the only engine and transmission available, were not what sports car enthusiasts expected. 1954 models painted in either Sportsman Red, Black, or Polo White featured red interiors, while Corvettes finished in Pennant Blue featured a beige interior and beige canvas soft top. Order guides listed several options, but all options were “mandatory,” and all 1954 Corvettes were equipped the same.

The US Auto Industry YouTube Channel features this 1954 Corvette commercial:

If you love the look of the original Corvette but long for a better driving experience and have the means to pay restomod level prices, this 1954 Chevrolet Corvette may be the C1 for you.  In addition to rare factory hardtop and side windows, the seller notes a stock factory-style interior upholstery kit will be included as part of the sale.

Show or go: What would you do with this 1954 Corvette restomod?  Please comment below and let us know!