by Guys with Rides | Sep 2022 | Classifinds, Free For All Friday 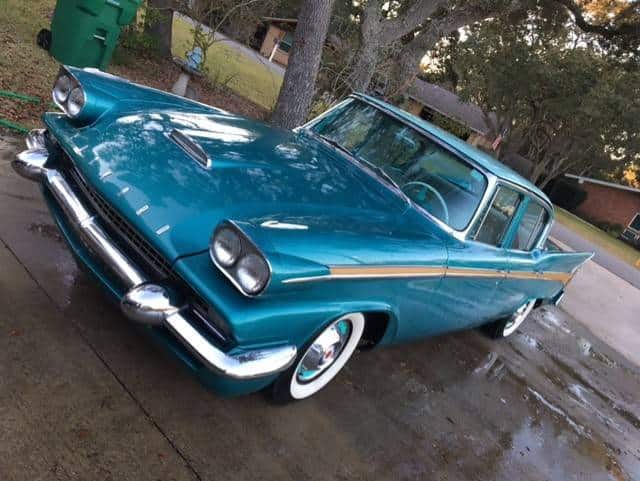 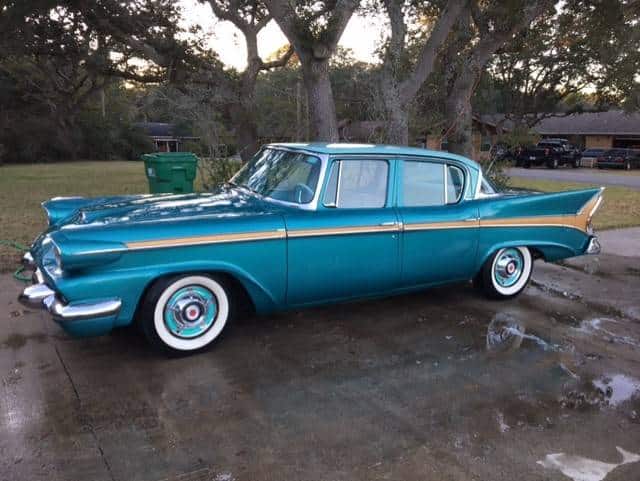 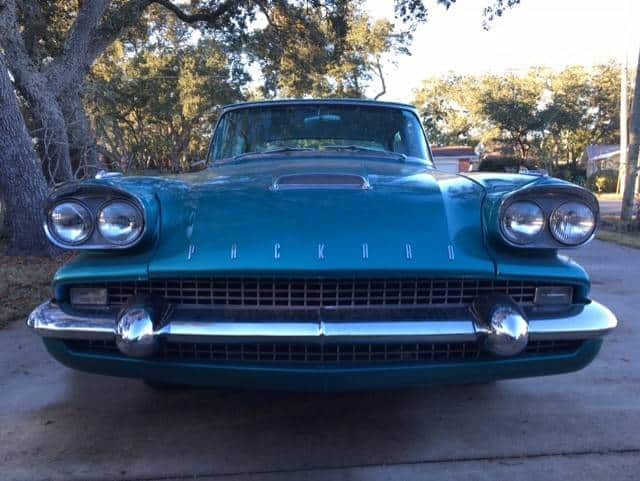 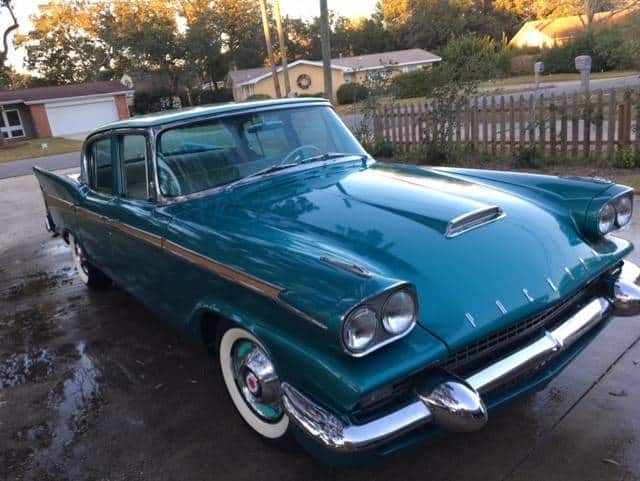 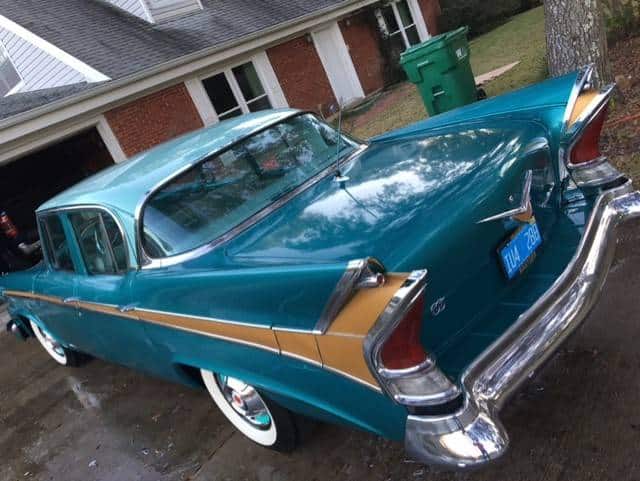 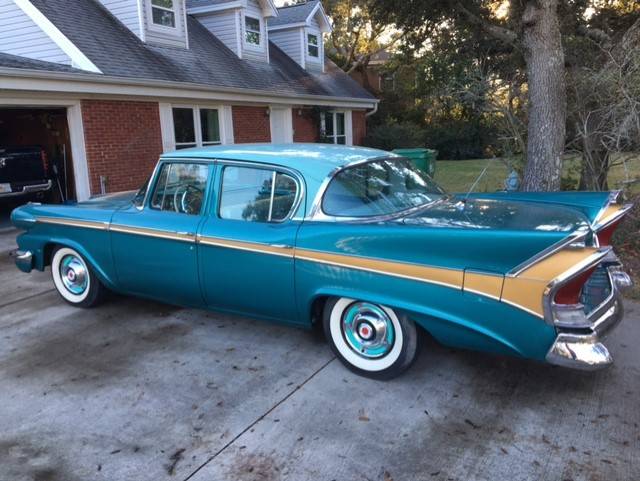 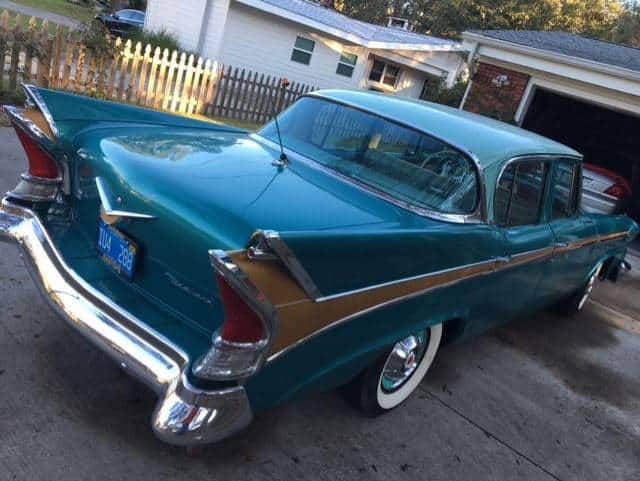 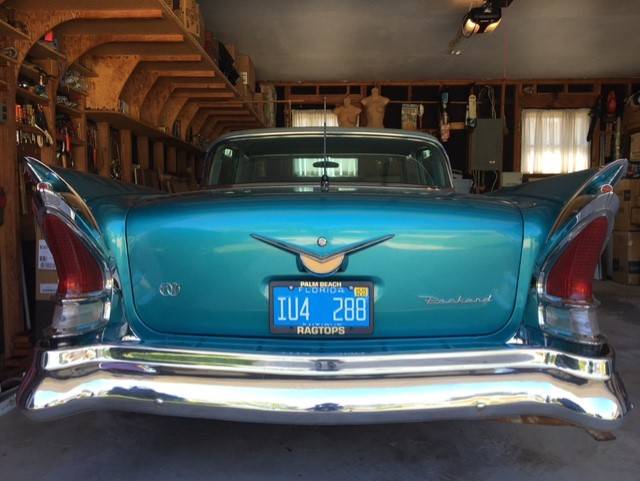 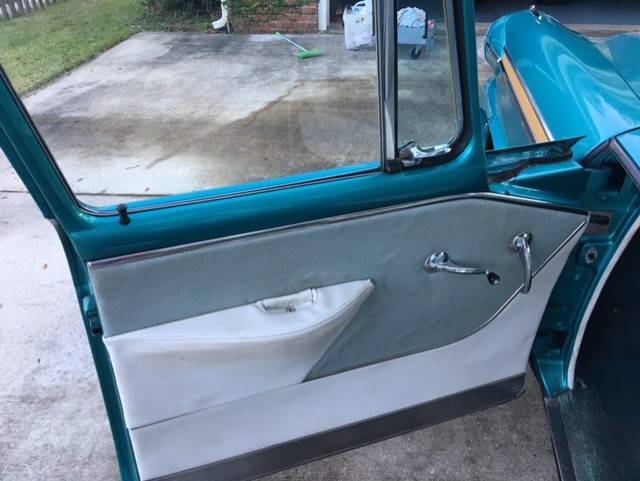 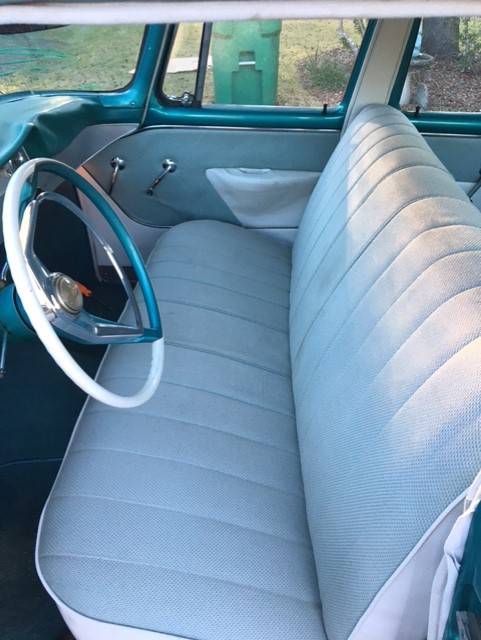 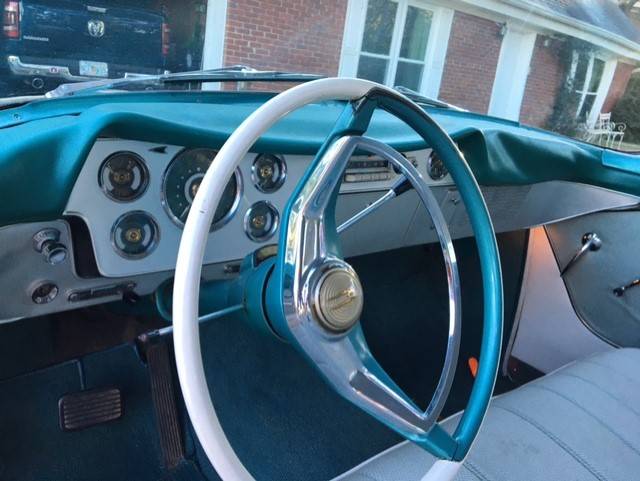 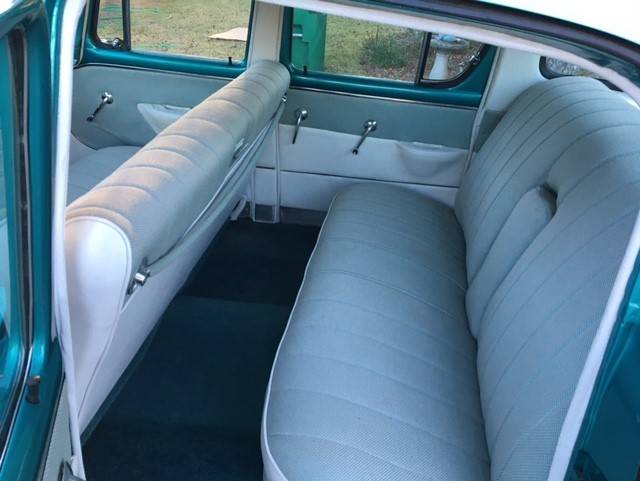 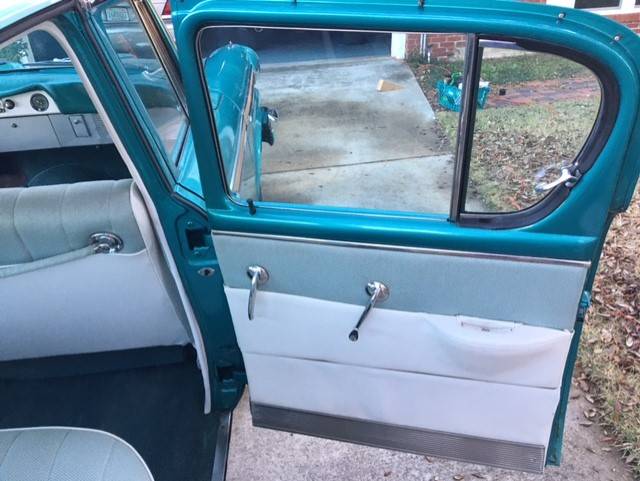 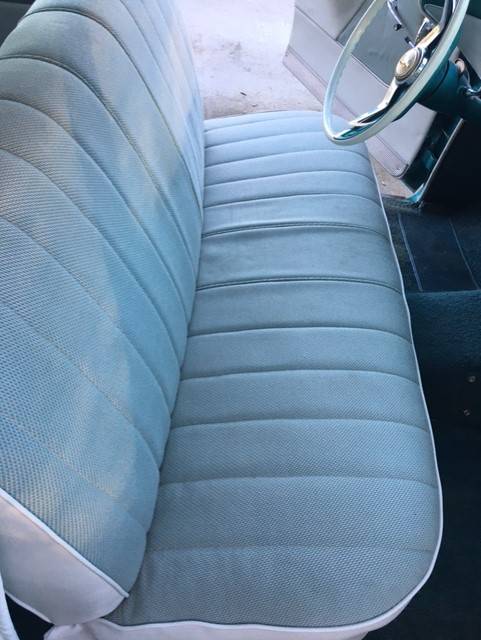 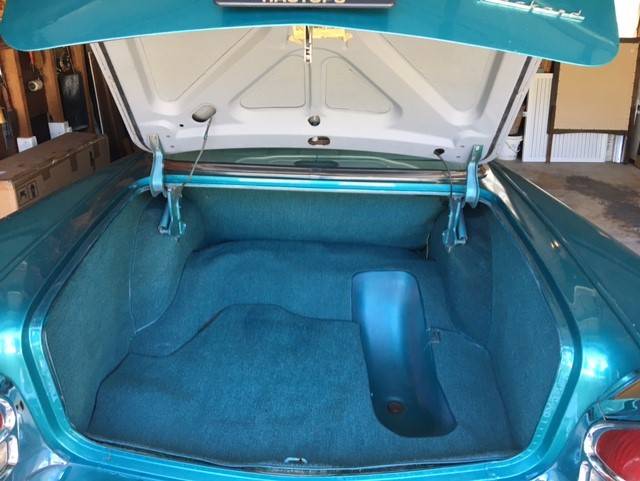 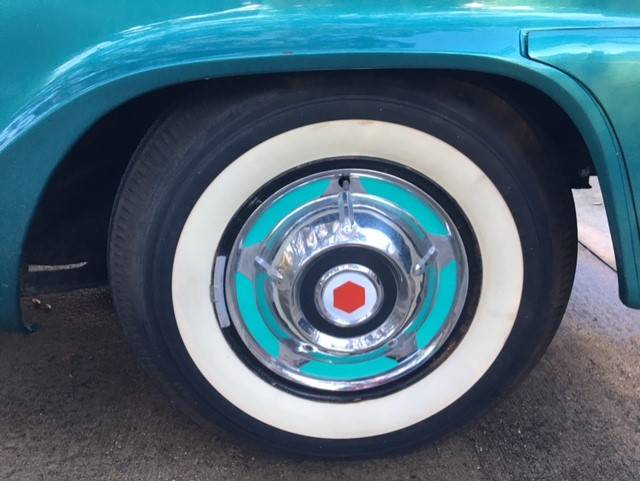 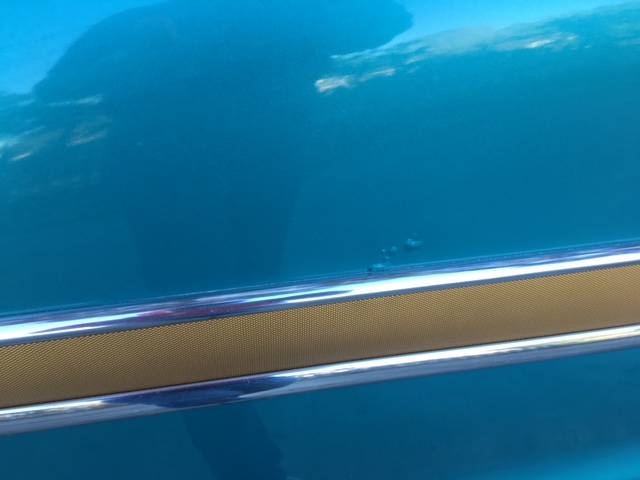 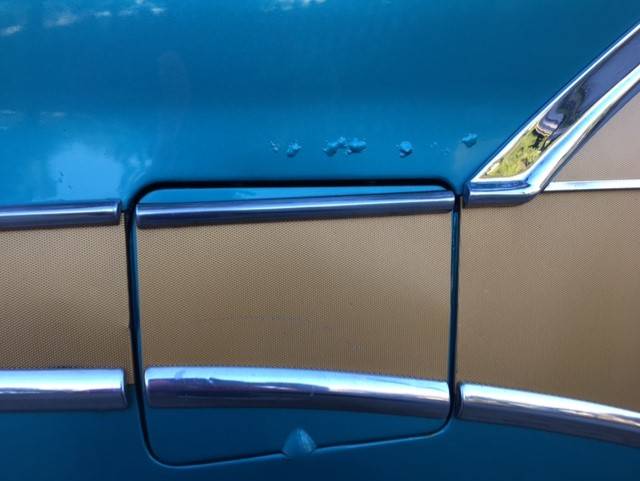 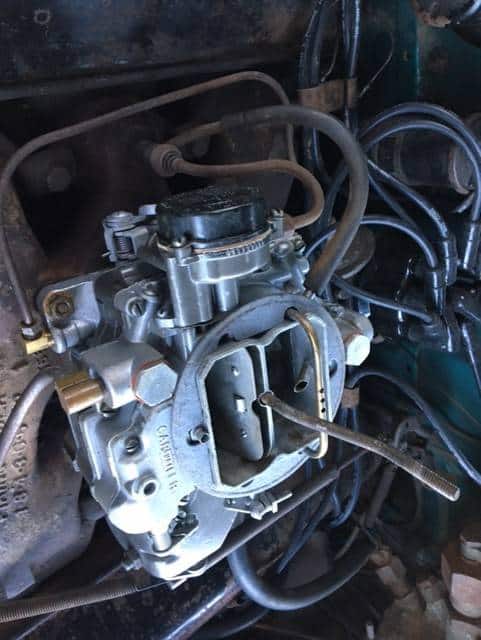 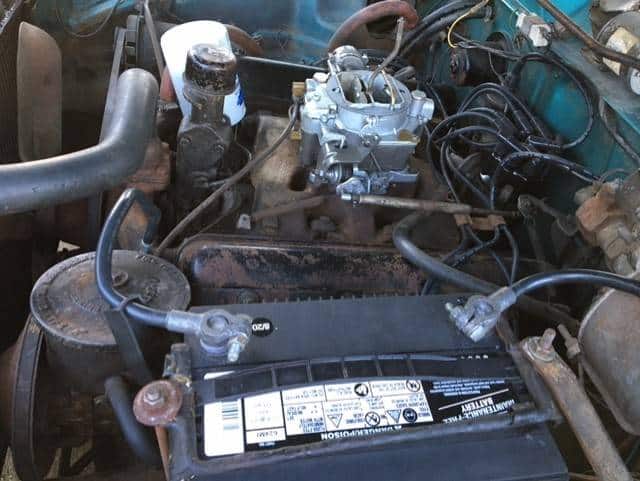 October 23, 2022, Update – We just confirmed the listing for this “Classifind” expired, so with no replacement found, we’re assuming this ride is “Sold?” While this one got away, please reach out either by email or call us directly if you’d like to be informed when we come across something similar.

The next time you’re at a show or meet with your knowledgeable collector car buddies, ask them what year the final production of Packard automobiles is.  Chances are good you will get all sorts of different answers, few if any of which will be 1958.  By that year, Packard’s offerings were nothing more than badge-engineered Studebakers.  What is so ironic is that Packard bought Studebaker in 1954, and the latter’s undisclosed financial woes ended up taking down the former.

By 1958, Packard offered only two car lines: the Packard Hawk and the 58L sedan, such as this Park Green Metallic example originally listed in September 2022 on Craigslist in Shalimar, Florida, which is said to be a low mileage survivor in need of some TLC after sitting for the past six months.

Once offered for $16,000, Classic.com, the analytics and search engine for the collector car market, confirms the ask is slightly above the five-year rolling average of this guide’s summary for all 1958 Packard 58L sedans.  By clicking on the green dots in the graph below, you can navigate to each comparable car sold as a way to help you evaluate the price of the truck featured here:

As a second data point, the  Collector Car Market Review Online Tool reveals the seller’s ask falls above this guide’s #1 “Excellent” appraisal of $14,200.

In October 1954, Packard Motor Car Company bought the failing Studebaker Corporation to form America’s fourth-largest automobile company without knowing their circumstances or considering the financial implications. Studebaker-Packard’s Nance refused to consider merging with AMC unless he could take the top command position (Mason and Nance were former competitors as heads of the Kelvinator and Hotpoint appliance companies, respectively). Unfortunately, Mason’s grand vision of a Big Four American auto industry ended on October 8, 1954, with his sudden death from acute pancreatitis and pneumonia.

A week after the death of Mason, the new president of AMC, George W. Romney, announced, “there are no mergers under way either directly or indirectly.”  Romney continued with Mason’s commitment to buy components from SPC. Although Mason and Nance had previously agreed that SPC would purchase parts from AMC, it did not do so. Packard’s engines and transmissions were comparatively expensive, so AMC began the development of its own V8 engine, and replaced the outsourced unit by mid-1956.  Although Nash and Hudson merged, the four-way merger Mason had hoped for, which would have joined Nash, Hudson, Studebaker, and Packard, did not materialize. The S-P marriage (really a Packard buyout) proved to be a crippling mistake. Although Packard was in fair financial condition, Studebaker was not, struggling with high overhead and production costs and needing the impossible figure of 250,000 cars annually to break even. Due diligence was placed behind “merger fever,” and the deal was rushed. It became clear after the merger that Studebaker’s deteriorating financial situation put Packard’s survival at risk.

Consequently, by 1958 Packard’s line was little more than badge-engineered Studebaker models.  That final year saw the Packard line expanded to four models; a 4-door sedan, a 2-door hardtop (sometimes referred to as the “Starlight,” a name used by Studebaker), a 4-door station wagon, and the Packard Hawk, a modification of Studebaker’s Golden Hawk with a “fishmouth” Packard grille.

Restyled by Duncan McRae, Studebaker-Packard’s finances dictated that the changes for 1958 be made as cheaply as possible. Quad headlights, as on Studebakers, were achieved by affixing pods to the previous year’s front fenders designed for two headlights. In the rear, McRae attempted to follow the tailfin craze established by Chrysler’s 1957 “Forward Look” by crafting outward-canted steel fin extensions that were mounted to the tops of the existing vertical rear fenders; they were very reminiscent of the 1957 Dodge Custom Royal in styling. Studebaker used this same trick of adding fins on the 1957 Hawks and the Raymond Loewy-designed Rootes group cars of 1957. 1956 Clipper taillight units continued to be used. Packards also adopted a low, wide “fishmouth” grille to distinguish them from their Studebaker cousins further. Other notable changes included the hardtops’ astonishingly attractive rooflines, very similar to concurrent Chrysler/Desoto designs. Also, the switch to a one-piece drive shaft allowed Studebaker engineers to flatten the floor, which also allowed flattening of the roof panels on sedan and hardtop models. Packard (and Studebaker) also switched to 14″ wheels, so most 1958 models are noticeably lower.

Despite McRae’s efforts, the car that emerged appeared cobbled together rather than as a cohesive design. Auto reviewer “Uncle” Tom McCahill remarked that from the rear, it looked as if the cars had been left in the sun too long, and the canted fiberglass fins had started to melt down the straight rear fender sides.

Only 2,034 of the three standard models (sedan, hardtop, and station wagon) were produced; an additional 588 Packard Hawks were also built. The station wagon is the rarest of all ’58 Packards, with only 159 produced. The last Packard rolled off the South Bend assembly line on July 25, 1958.

If you can help the seller get this 1958 Packard sedan started after sitting for six months, you’ll have access to one of the last cars produced by what was once a very storied American luxury brand. This example provides a pretty color combination with an overall survivor vibe due to its low 68K original miles.

If you are serious about buying this 1958 Packard, you can start the conversation by either calling or texting Mike at (256) 783-5433.  When you connect, please remember to mention you saw his rare sedan featured here on GuysWithRides.com. Good luck with the purchase!

“Selling an extremely rare 1958 Packard 58L Sedan in Park Green Metallic (Turquoise). Only 1,200 sedans were produced, so there were probably no more than 50. A definite hit at any car show. There won’t be another one there!
Packard produced cars from 1899 to 1958, with the last 2 years being produced at the Studebaker plant in South Bend, Indiana. They were known for high quality and durability, competing with Cadillac and Lincoln. This was one of the very last Packards to roll off the assembly line, which ceased Packard production in July 1958.

I hate to sell her, but I just don’t have the time to take care of her, and I have another project. I bought her for $19,000 in August 2021. I immediately replaced the oil pressure switch, thermostat, oil pan gasket, new rear main seal, a manual heater control value, and a new radiator cap. A few months ago, I got a deal on a 1997 Aston Martin, which is now taking up my time, so the old girl has gotta go!

I have not driven her in probably 6 months, and now I have not gotten her to start. She tries to turn over with some carburetor spray. I am not a mechanic, which I have proven! That may just require some more adjustment. But the overall condition is very good. I shall try to summarize.

The good:
1. The body is in great shape, but there are some rust spots under paint. Painted not long ago.
2. Chrome is nearly perfect all around, with very minor rust under bottom of bumper.
3. Glass is perfect, no flaws at all.
4. New rubber everywhere, every door, truck seal is new. As a result, she is very tight and does not leak unless you spray the hose directly at the seam.
5. New interior carpet, New seats, and New liners.
6. Vintage tires in great shape, but missing spare.
7. New seals on oil pan and rear main seal about 6 months ago.
8. Newer carburetor and distributor and plugs
9. New oil pressure switch, thermostat, radiator cap.
10. Battery is strong and only a few years old.
11. Gauges seem to work except clock. But I am not sure how accurate they are. They were working when I last drove her 6 months ago.
11. All lights and turn signals work as do the wipers. Again, last time I drove her.
12. Trunk repainted, recarpeted and looks like new, but missing a spare.
13. Original Packard hubcaps, recently repainted and restored.

Where she needs work:
1. Although the drum brakes were checked 7 months ago, the brake pedal goes to the floor with little response. This is why I stopped driving her. Then I got busy with other projects and did not have the time. Perhaps she just needs the master cylinder bled since I don’t see any brake fluid under the car from a leak.
2. As I mentioned, she does not start and I do not have the time to work on her. She was last on the road about 6 months ago.
3. She is missing a spare tire.
4. The foam from in the dashboard has disintegrated and falling out. You can see from picture it looks like a deflated balloon! The vinyl part of the dash is excellent though, if you can figure out to restuff the dash!
4. Radio does not work and missing a couple rings for the knobs.
5. Steering is fair. Not straight as it should be, so I did not drive her above 50mph, when I last drove her.
6. See pictures, some rust spots on body where it bubbled up.

This is an EXTREMELY rare automobile, with only 1,200 made and very few still around. Just try to find one on the internet anywhere in the U.S. The parts on it are a goldmine! The only one I noted in the U.S. is on Hemmings Motor News and located at Gateway Motor Cars in Ft. Lauderdale for $46,000. Although that one may be more drivable right now, the interior and the chrome of that vehicle are not as good as mine. I am selling this car for only a third of that price!“

Show or go: What would you do with this 1958 Packard Sedan?  Please comment below and let us know!