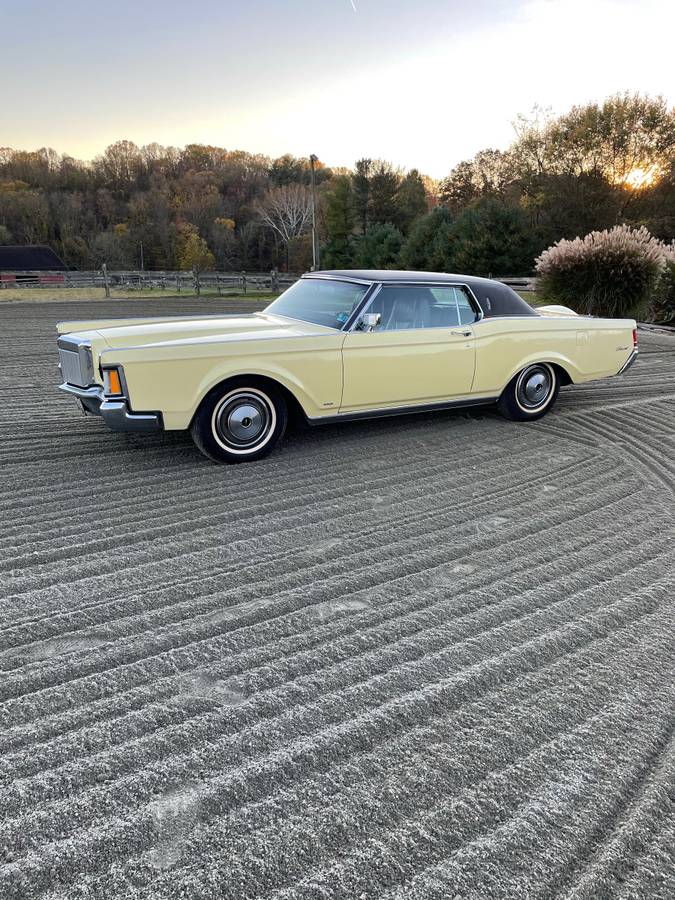 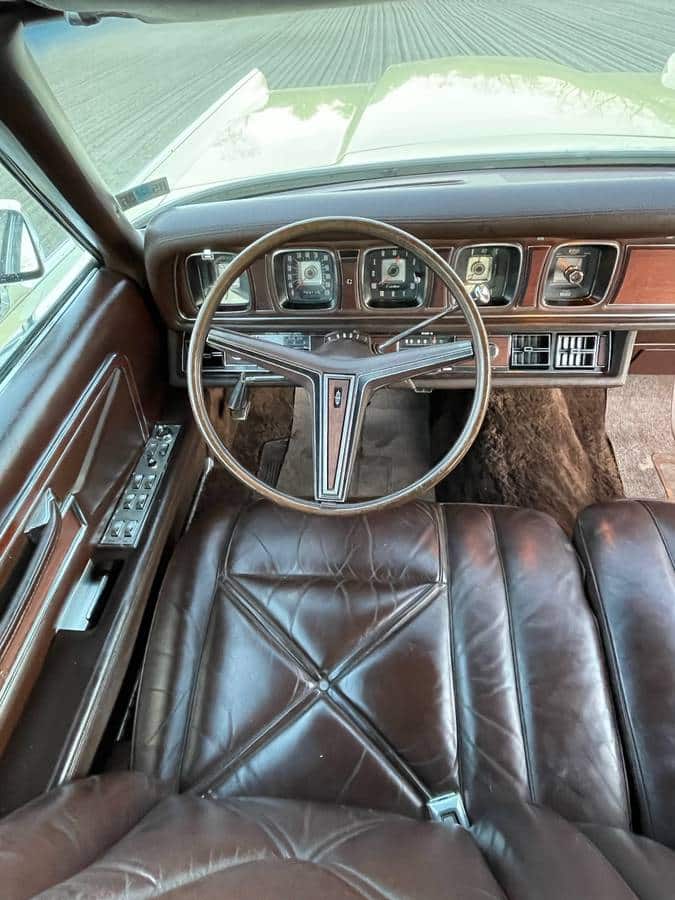 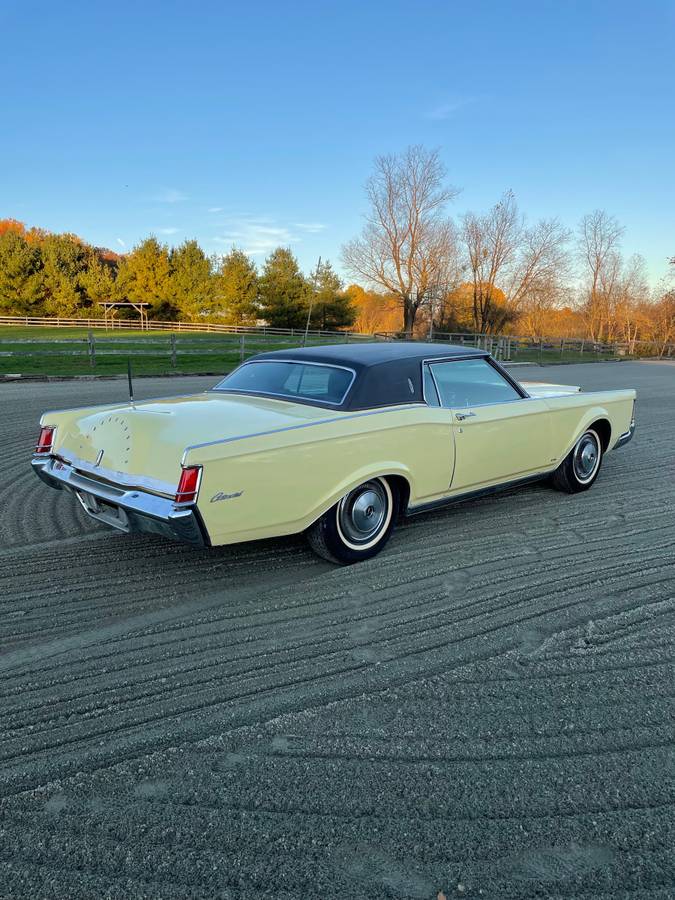 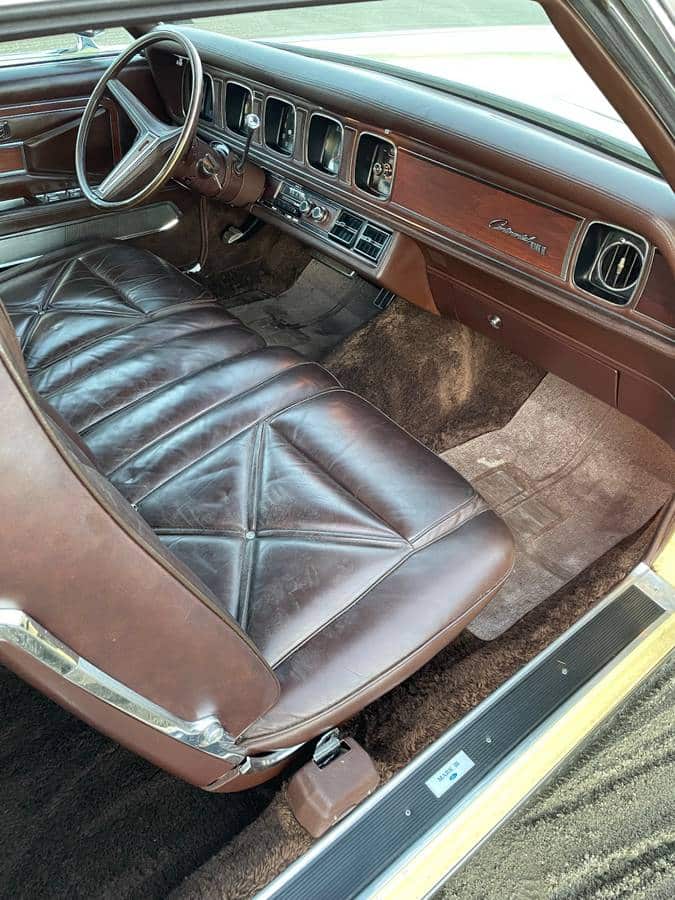 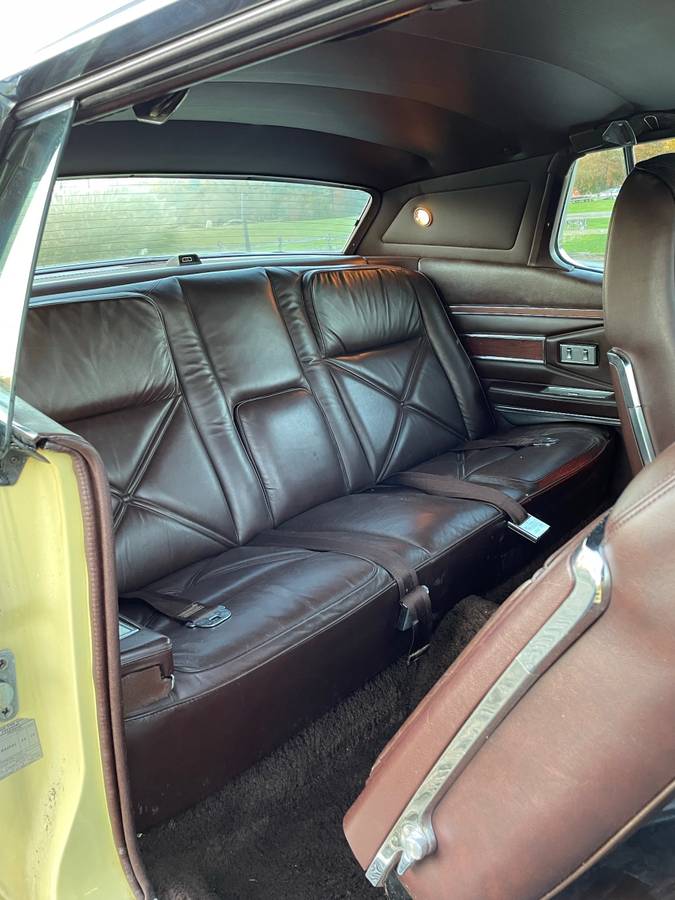 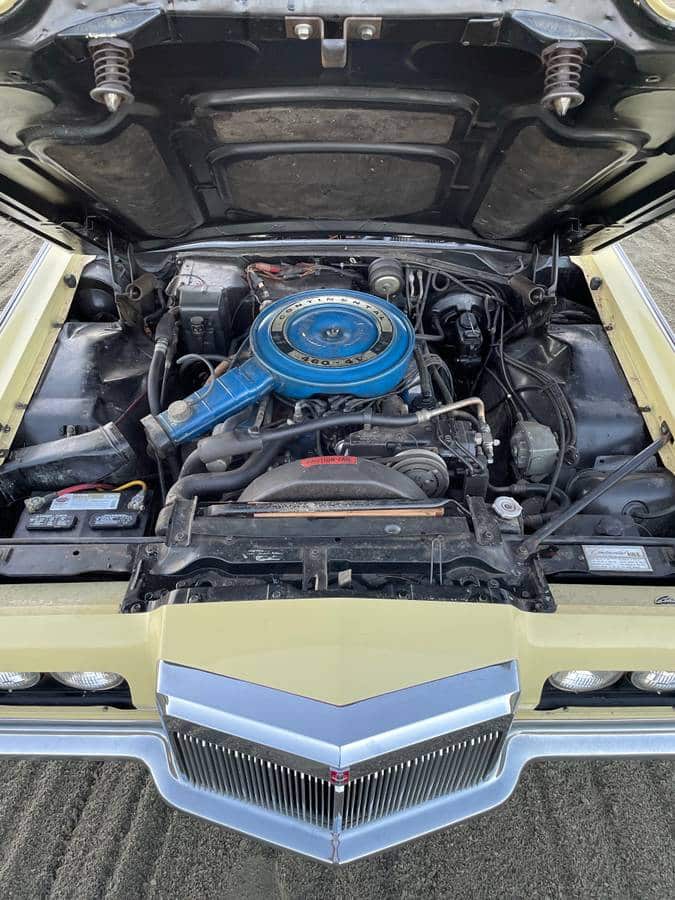 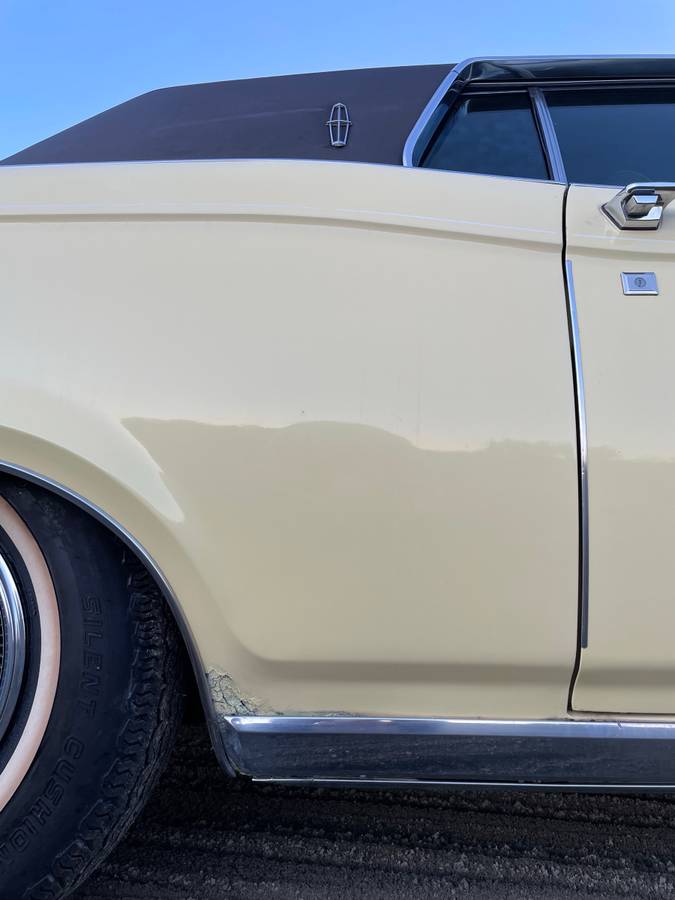 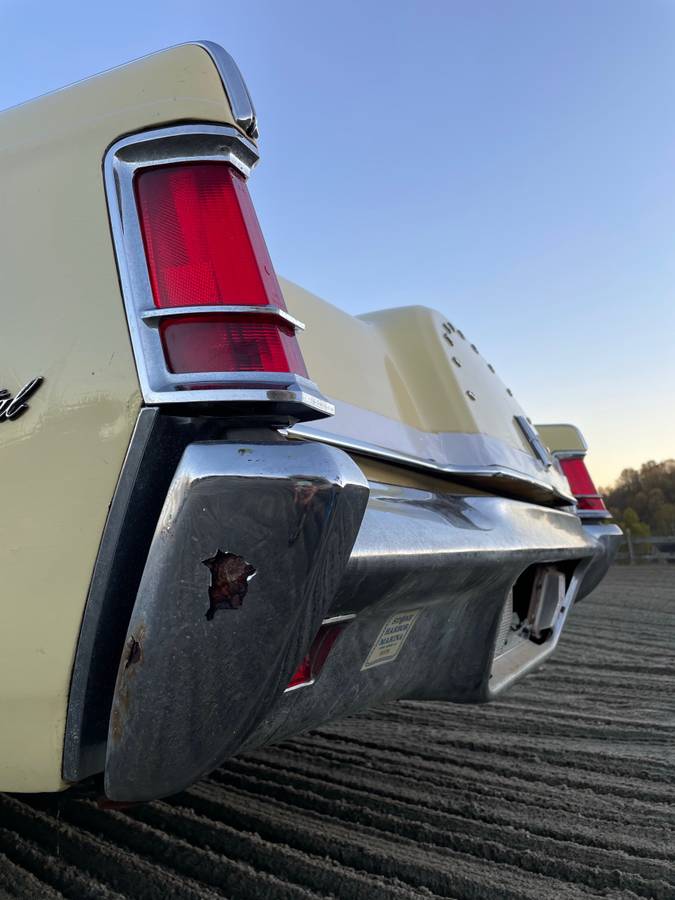 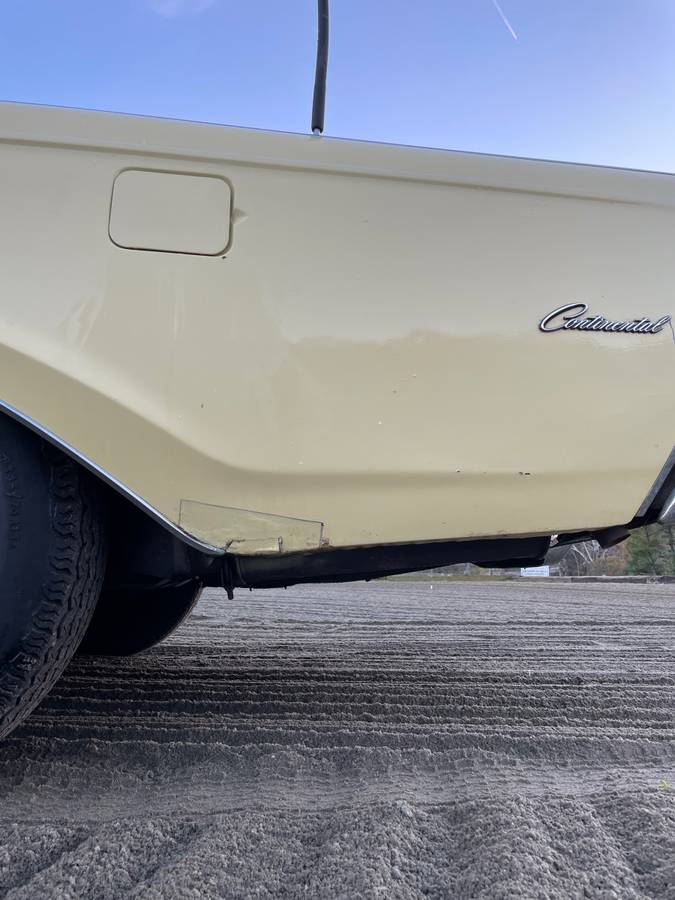 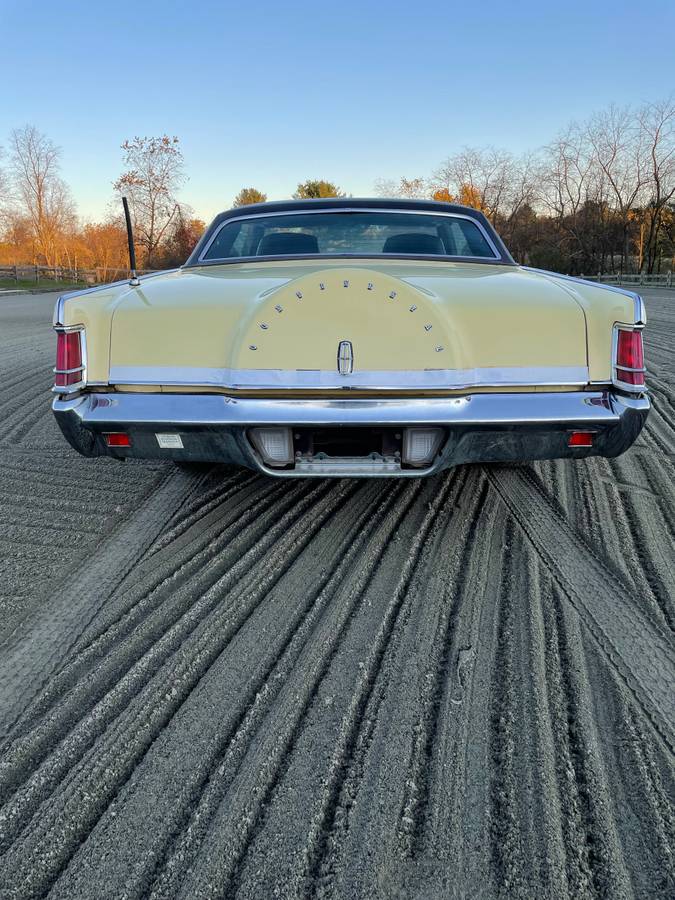 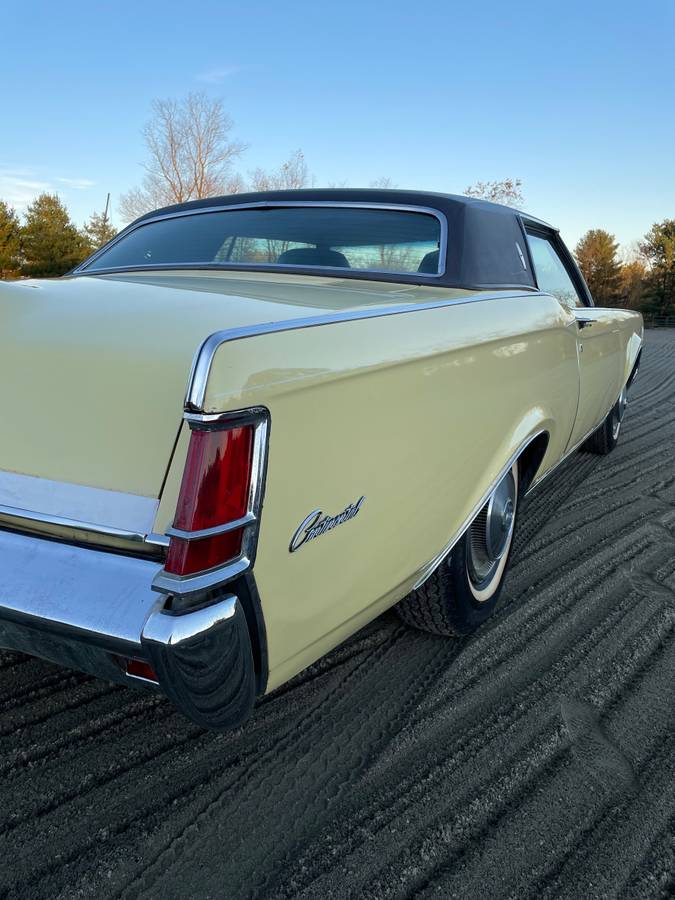 November 20, 2022, Update – We just confirmed the listing for this “Classifind” expired, so with no replacement found we’re assuming this ride “Sold?” While this one got away, please reach out either by email or call us directly if you’d like to be informed when we come across something similar.

It’s no secret our Malaise Mondays often feature Lincoln Continental Mark IVs and Mark Vs, to date, we’ve never featured the pre-cursor to those Malaise Era (1972 to 1984) land yachts: the 1969 to 1971 Mark III.  That is until we came across this yellow over brown leather 1971 Lincoln Continental Mark III 66K mile survivor originally listed in September 2022 on Craigslist in Unionville, Pennsylvania (Philadelphia).  The seller honestly reports several items the car needs to be repaired.  On a positive note, the seller plan to include a replacement truck lid so the next caretaker can swap out the current taped and rusty original unit.

While it’s common knowledge Lee Iacocca is famous for creating the Mustang for Ford and the minivan for Chrysler, lesser known is that he was the driver of the development of the highly successful Lincoln Continental Mark III for 1969.  By putting a Rolls Royce-like grille on an arguably more handsome version of the redesigned Ford Thunderbird, Iacocca’s idea helped bring the Lincoln-Mercury brand into profitability.

Once offered for $10,500, Classic.com, the analytics and search engine for the collector car market, confirms the ask is slightly below the one-year rolling average of this guide’s summary for similar Lincoln Continental Mark IIIs produced between 1969 and 1971.  By clicking on the green dots in the graph below, you can navigate to each comparable car sold as a way to help you evaluate the price of the Mark III featured here:

As a second data point, the  Collector Car Market Review Online Tool reveals the seller’s ask falls between this guide’s #3 “Good” estimate of $9,400 and its #2 “Very Good” appraisal of $14,700.

The Lincoln Division of Ford marketed the Continental Mark III personal luxury car for the 1969 through 1971 model years.  The namesake successor of the 1956–1957 Continental Mark II, the Mark III again served as the flagship vehicle of Ford Motor Company. Produced as a two-door hardtop, Ford developed the Mark III as a direct competitor to the Cadillac Eldorado, creating a three-decade market rivalry between the two cars.

To lower development and production costs over the largely hand-built Mark II, the Mark III shared its chassis underpinnings with the four-door Ford Thunderbird (fifth generation). To distinguish itself from Thunderbird (and from the Lincoln Continental), the Mark III was styled with model-specific design elements, including hidden headlamps (with body-color covers) and a Rolls Royce-style grille. Interestingly, Mark III used the same top and “slide into the C pillar” rear windows as the two-door Thunderbird. Mark III used the simulated Continental tire trunk lid, carried over from Mark II. In a first for American-produced cars, the 1970 Mark III came equipped with Michelin “X” Radial Tires as standard equipment.

Ford Vice President Lee Iacocca was the brains behind the 1969 Continental Mark III. Iaccoca directed Design Vice President, Gene Bordinat, to “put a Rolls-Royce grille on a Thunderbird” in September 1965. Iacocca assigned the development of the Mark III to the new “Strawberry Studio”- a special development preproduction team led by Bordinat.  The Mark III was based on the fourth-generation Lincoln Continental (1961–1969) and the four-door fifth-generation Thunderbird introduced in 1967. With the Thunderbird “dying in the marketplace,” Iacocca wanted to put the company’s development investment to better use by expanding its platform over several models. The final design of the Mark III was introduced to a Lincoln-Mercury Focus Group in mid-January of 1966- receiving an overwhelmingly negative response from the group. Despite this feedback, Iacocca and Henry Ford II loved the design and overruled objections. On March 24th, 1966, Mark III was given the green light for production.

The Mark III was intended to compete head-to-head with the top of the domestic personal luxury car market, Cadillac’s heavily redesigned front-wheel drive Eldorado. This placed it above the second-tier premium personal luxury cars such as the Ford Thunderbird, Buick Riviera, Oldsmobile Toronado, and Chrysler New Yorker coupe. The Eldorado was built upon the Toronado frame, the Mark III was based on the Thunderbird’s. While the side-rail frame was identical to the Thunderbird’s, the Mark III bore almost 300 pounds more bodywork.

The Mark III was unveiled at the 1968 running of the 12 Hours of Sebring on March 23, 1968, as an early 1969 model. The model was a remarkable commercial success because it combined the high unit revenue of a luxury model with the low development costs and fixed cost–amortizing the utility of platform-sharing in a car that was appealing enough to buyers that many units were sold. Iacocca said, “We brought out the Mark III in April 1968, and in its very first year, it outsold the Cadillac Eldorado, which had been our long-range goal. For the next five years [Marks III and IV] we had a field day, partly because the car had been developed on the cheap. We did the whole thing for $30 million, a bargain-basement price because we could use existing parts and designs.”  Iacocca explained that this transformed the Lincoln-Mercury Division from losing money on every luxury car (via low unit sales on high fixed costs) to a profit center, making the new Mark series as big a success as any he ever had in his career—a remarkable statement from an executive who led the programs for the original Ford Mustang and the Chrysler minivan family.

1971 saw the Golden Anniversary for the Lincoln marque and the third and final year of Mark III production. Sales were better than ever, at 27,091, almost equal to the Eldorado’s, a harbinger for the new decade.

In its second annual King of the Hill contest, Motor Trend (July 1971) again gave the Continental Mark III the nod by a wider margin than 1970 despite being a warmed-over 1968 model, while the Cadillac was all-new from the ground up. M/T noted that the Mark III’s leather interior was far more luxurious and detailed than the test Eldorado’s nylon cloth. The Continental’s real wood dash trim was far more attractive than the Cadillac’s simulated pieces.

If you’re looking for a driver-quality classic car you can enjoy driving while sorting the items needing repair as your time and budget allow, this 1971 Lincoln Continental Mark III might be the classic car for you.

“Selling this fun driver. 71 mark III. 66,000 miles.
It needs nothing to be driven around town but will need an alignment and a fuel gauge to be highway ready. It does leak drips of transmission fluid after running, I leave a pan under it when parked. It has a couple of rust spots by the lower quarter panels and along the bottom of trunk lid (comes with a new trunk lid).
The drivers rear window is inoperable.
The radio works and the heat is hot but no A/C.
Otherwise no issues and a really fun car.
New tires, radiator, electric ignition, rebuilt carb, new filters, and oils.
Clean title in hand. Not in a hurry to sell it.
Location West Chester pa 19382“

Restore or Drive As-Is: What would you do with this driver-quality 1971 Lincoln Continental Mark III?  Please comment below and let us know!