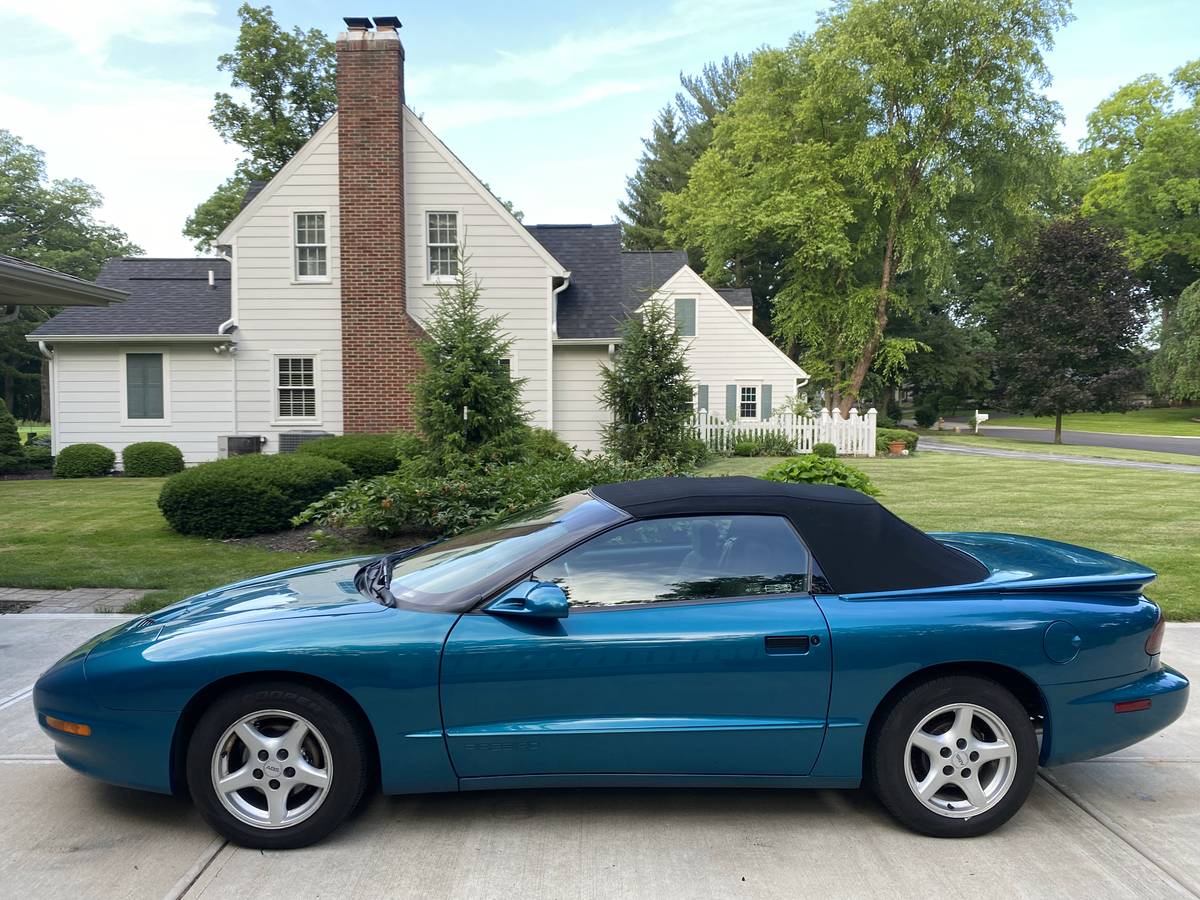 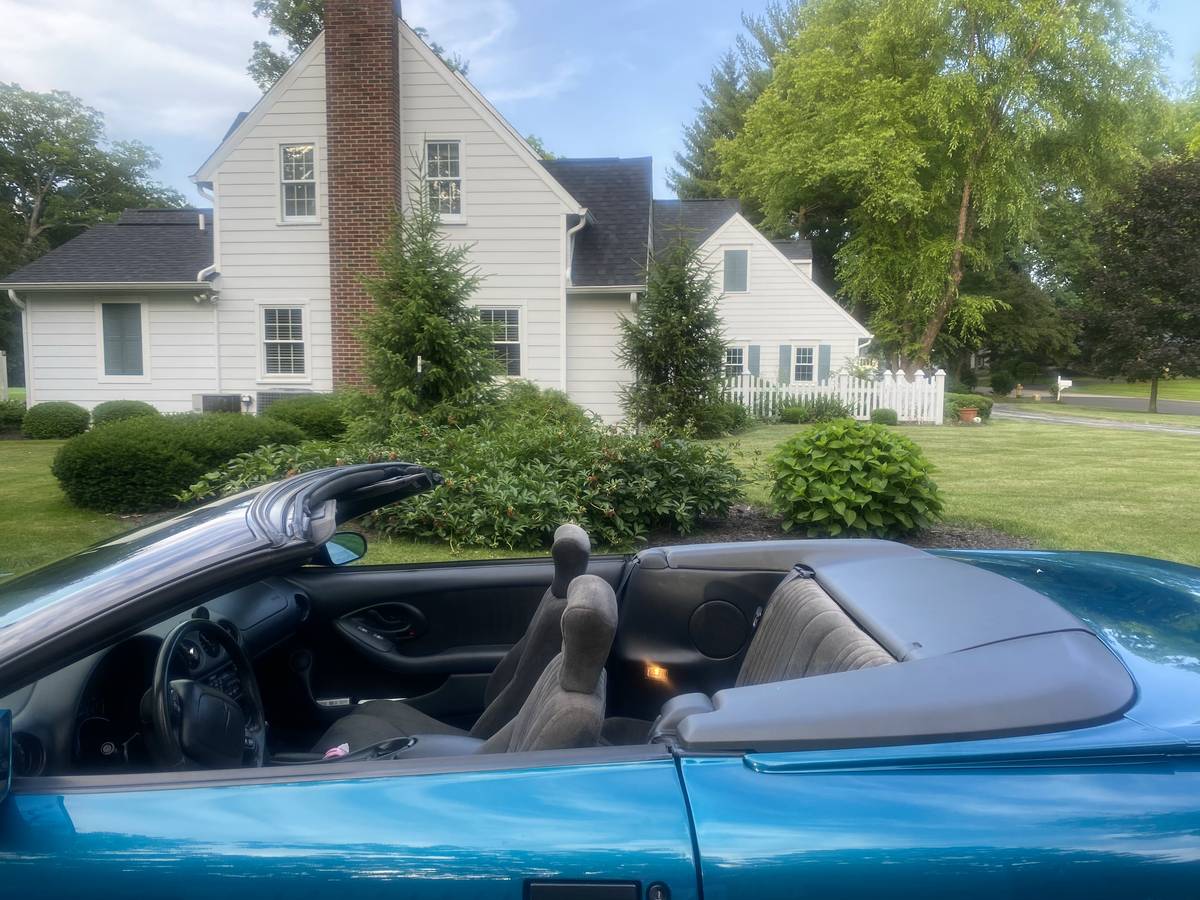 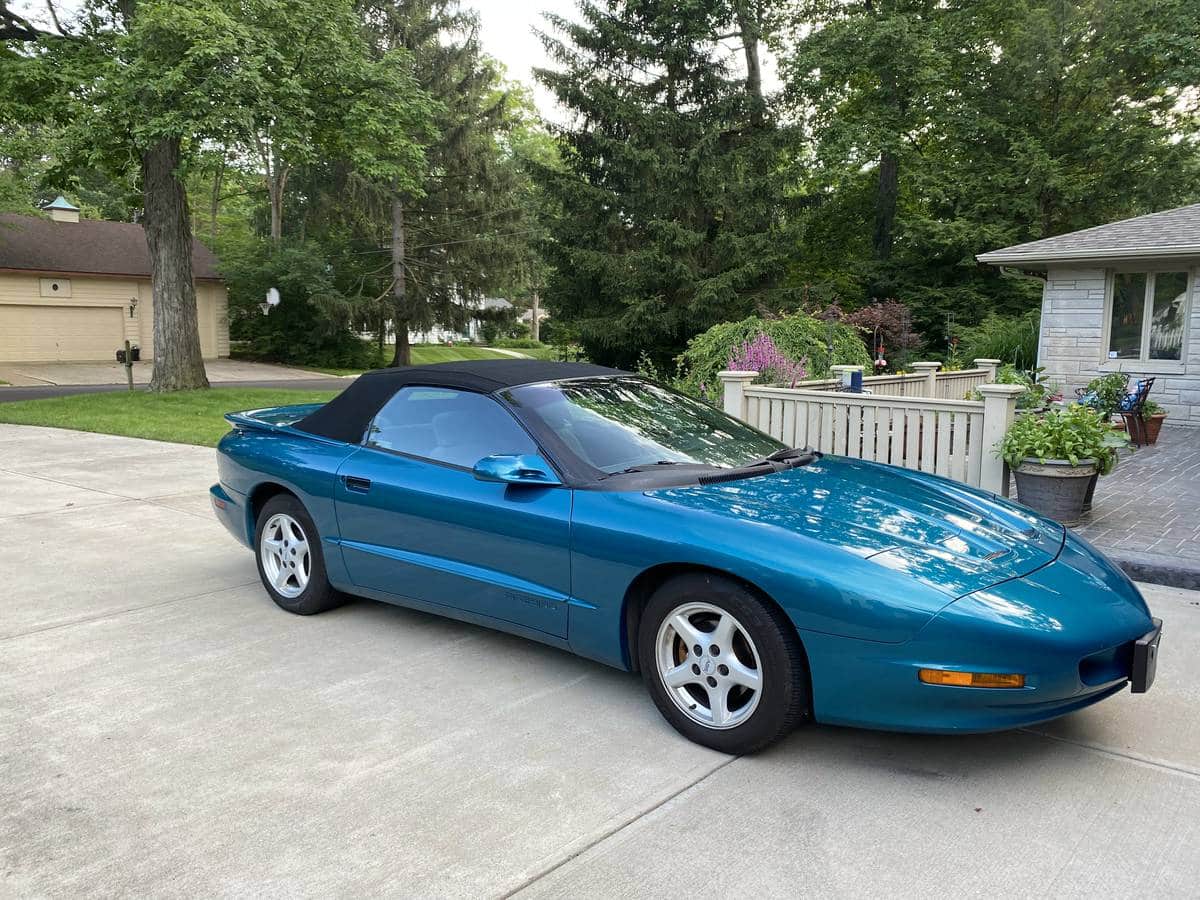 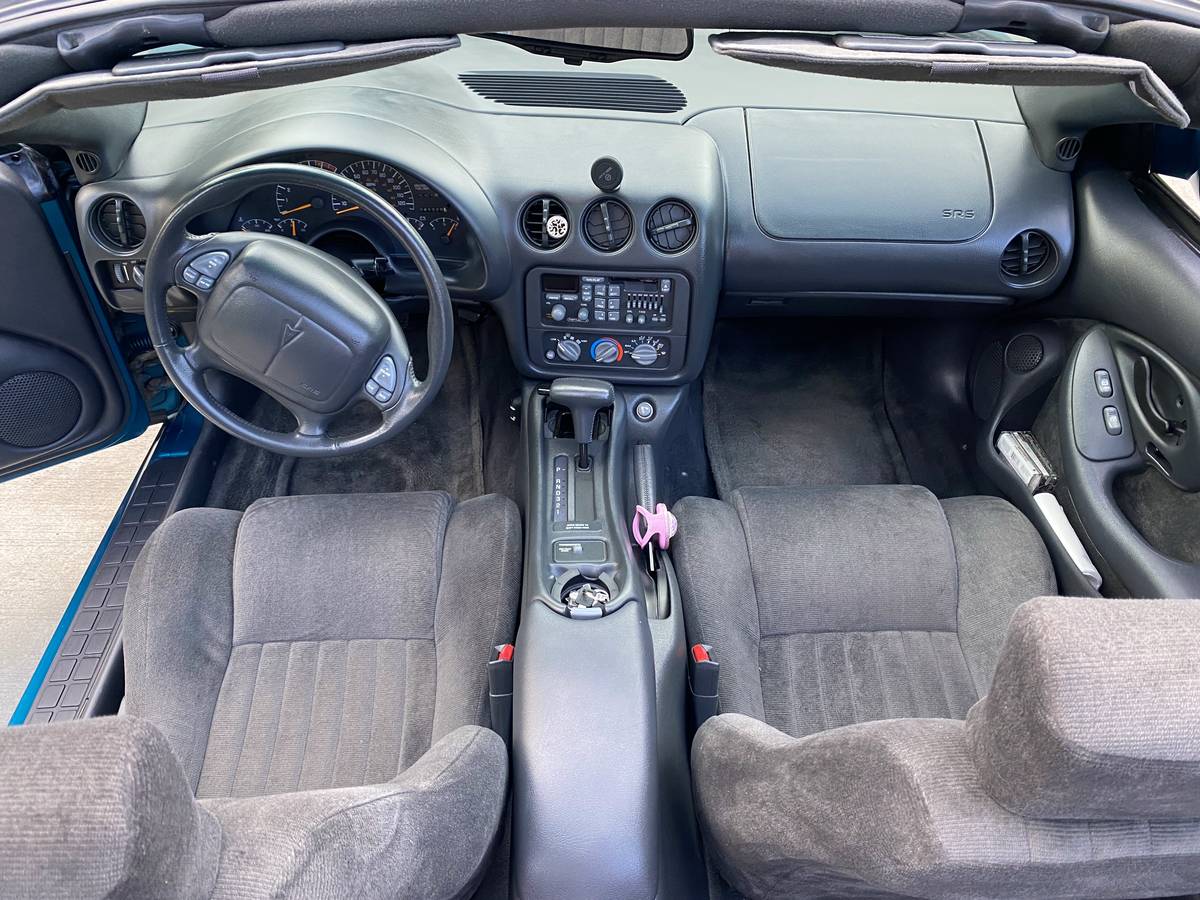 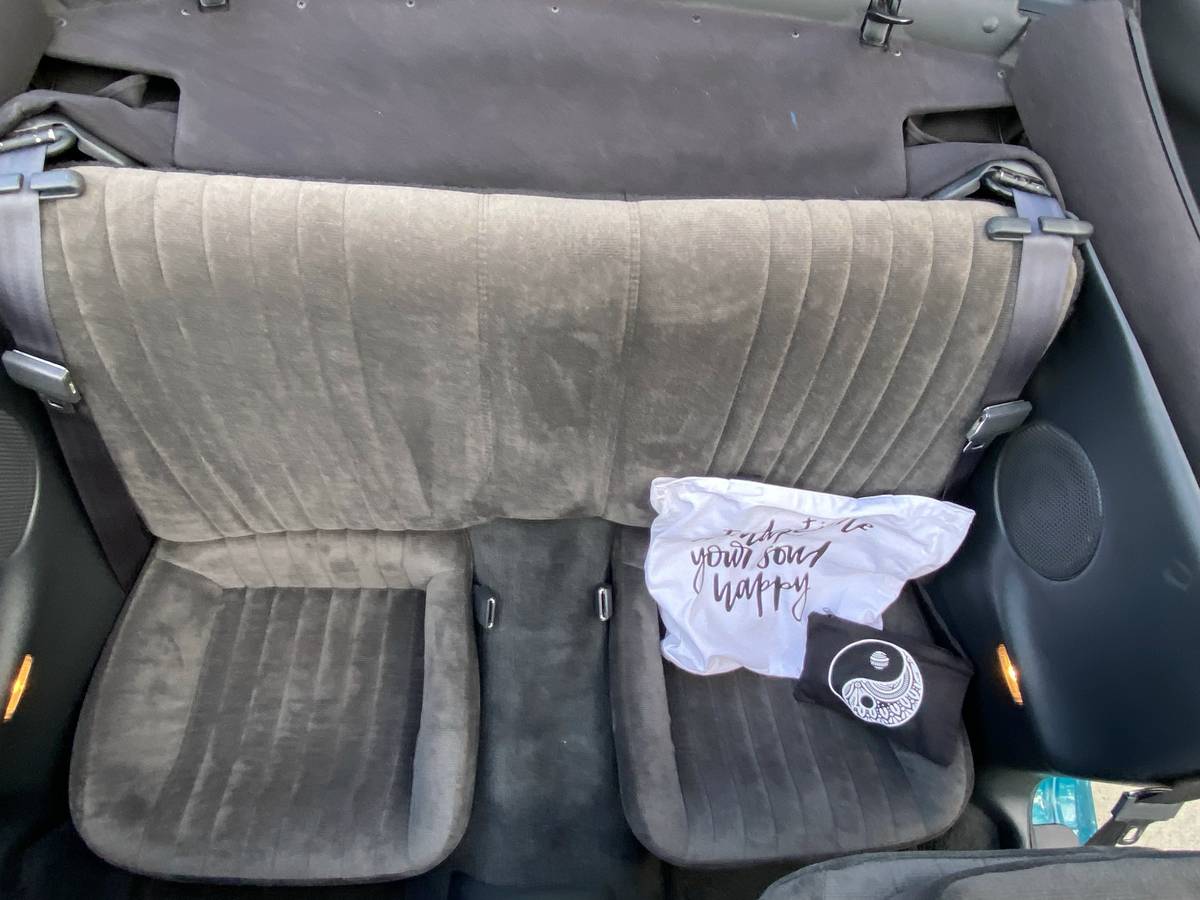 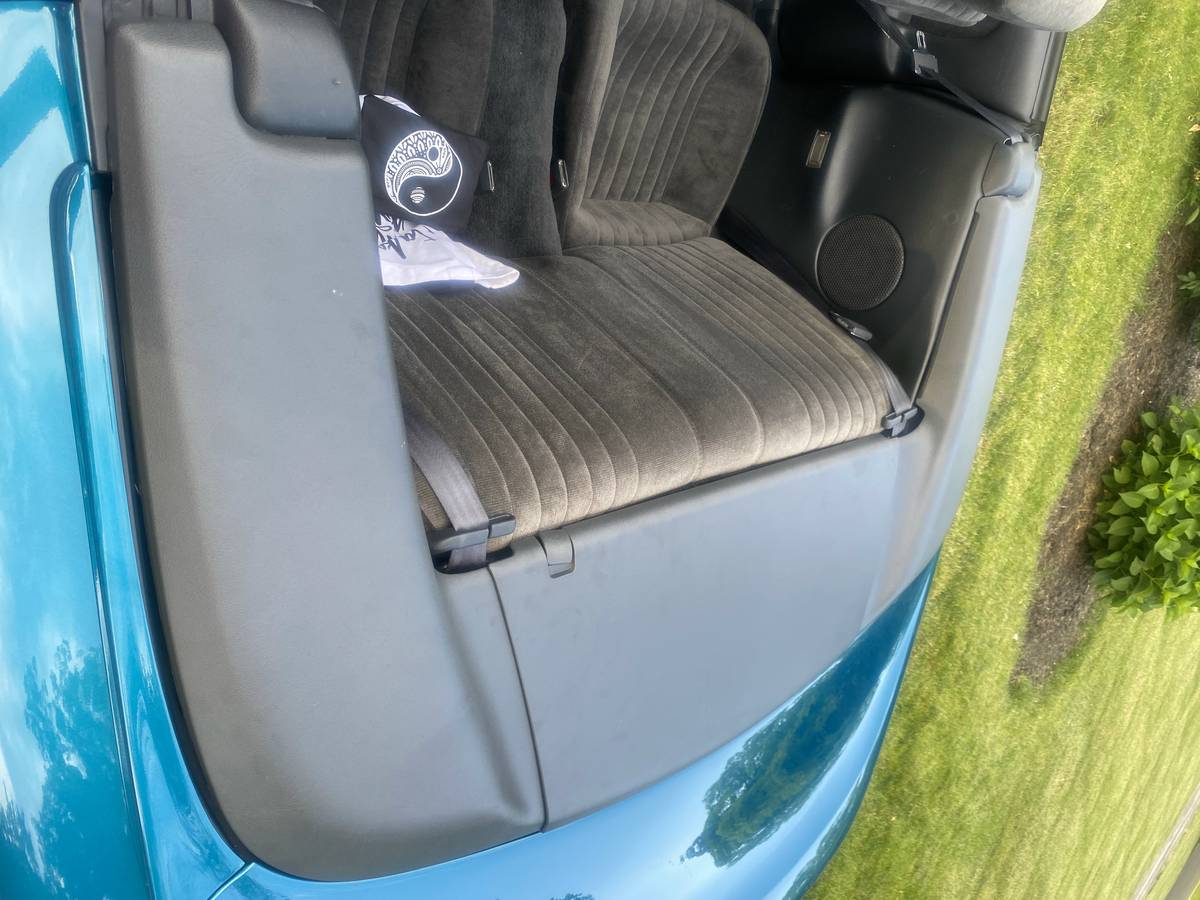 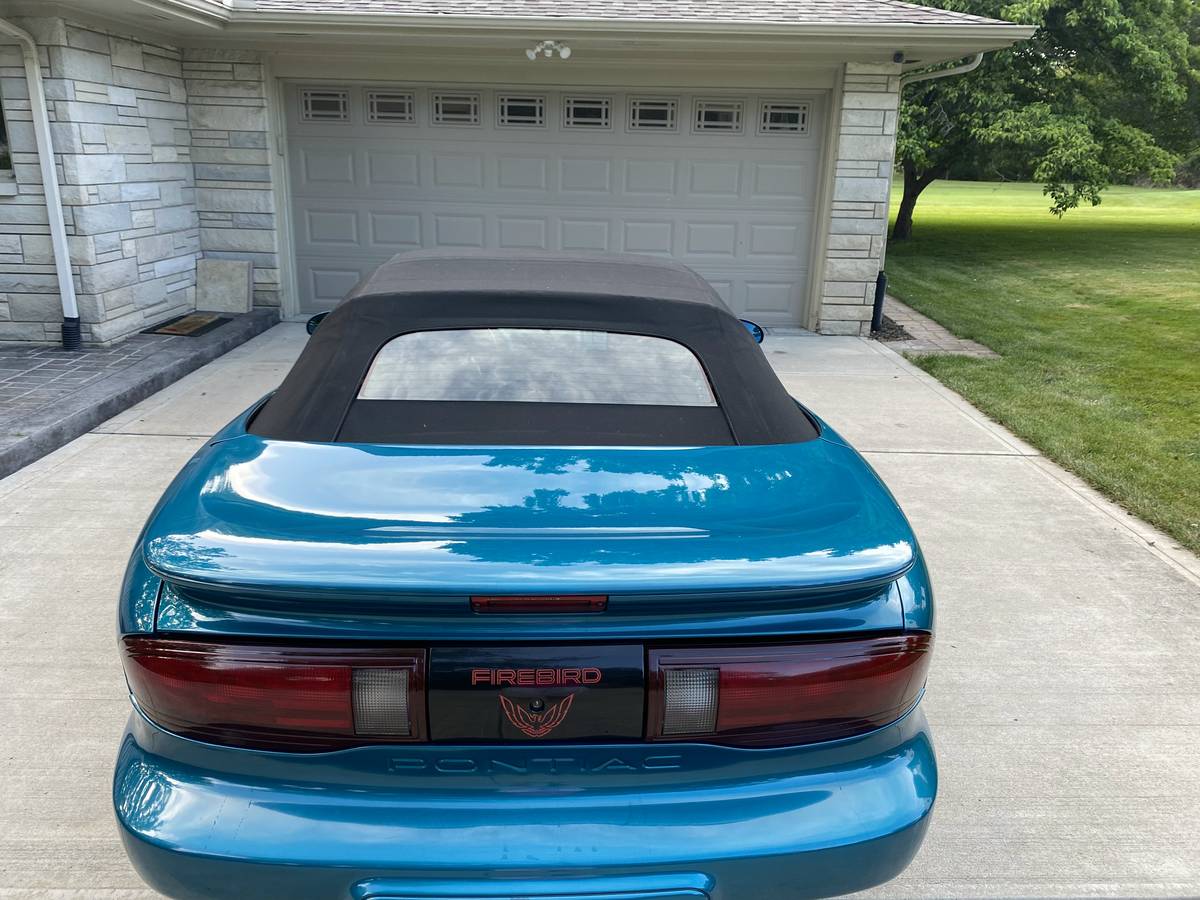 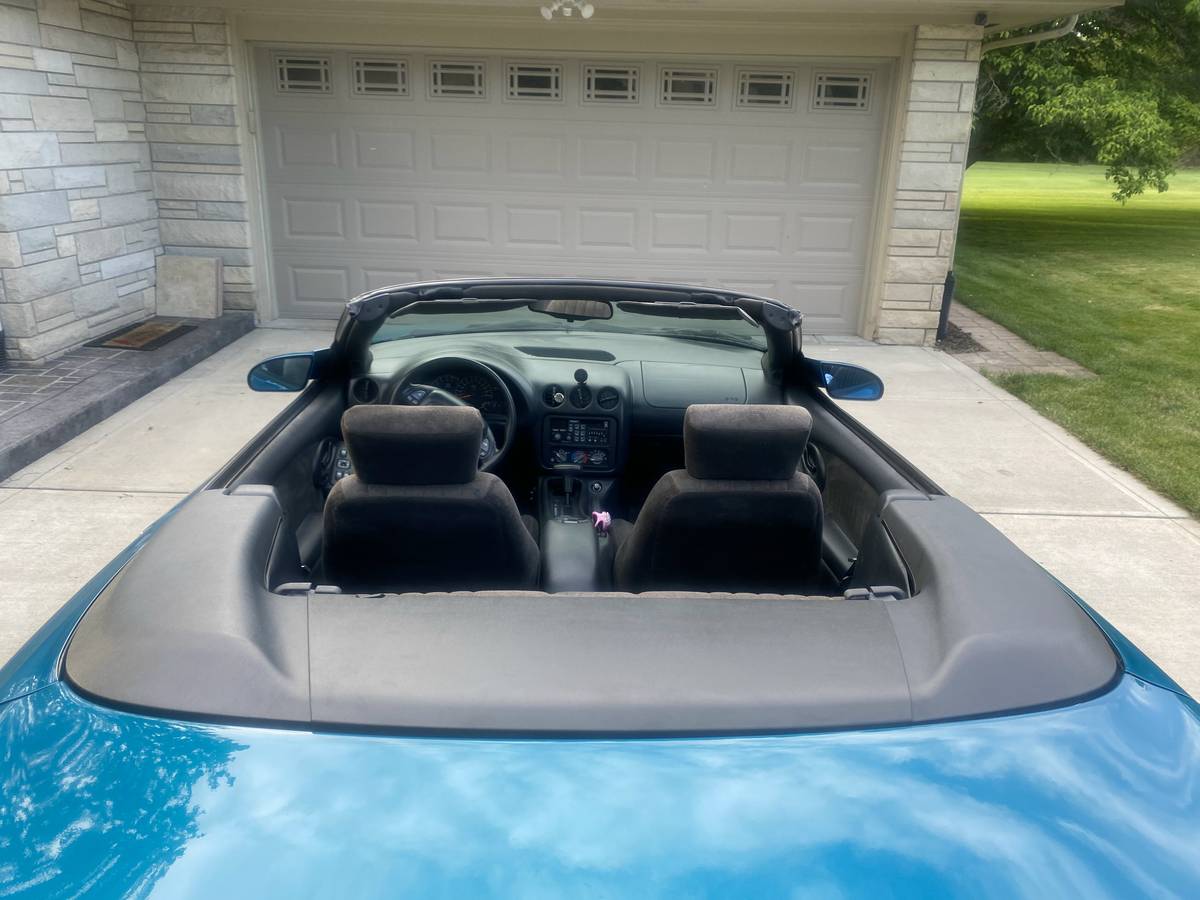 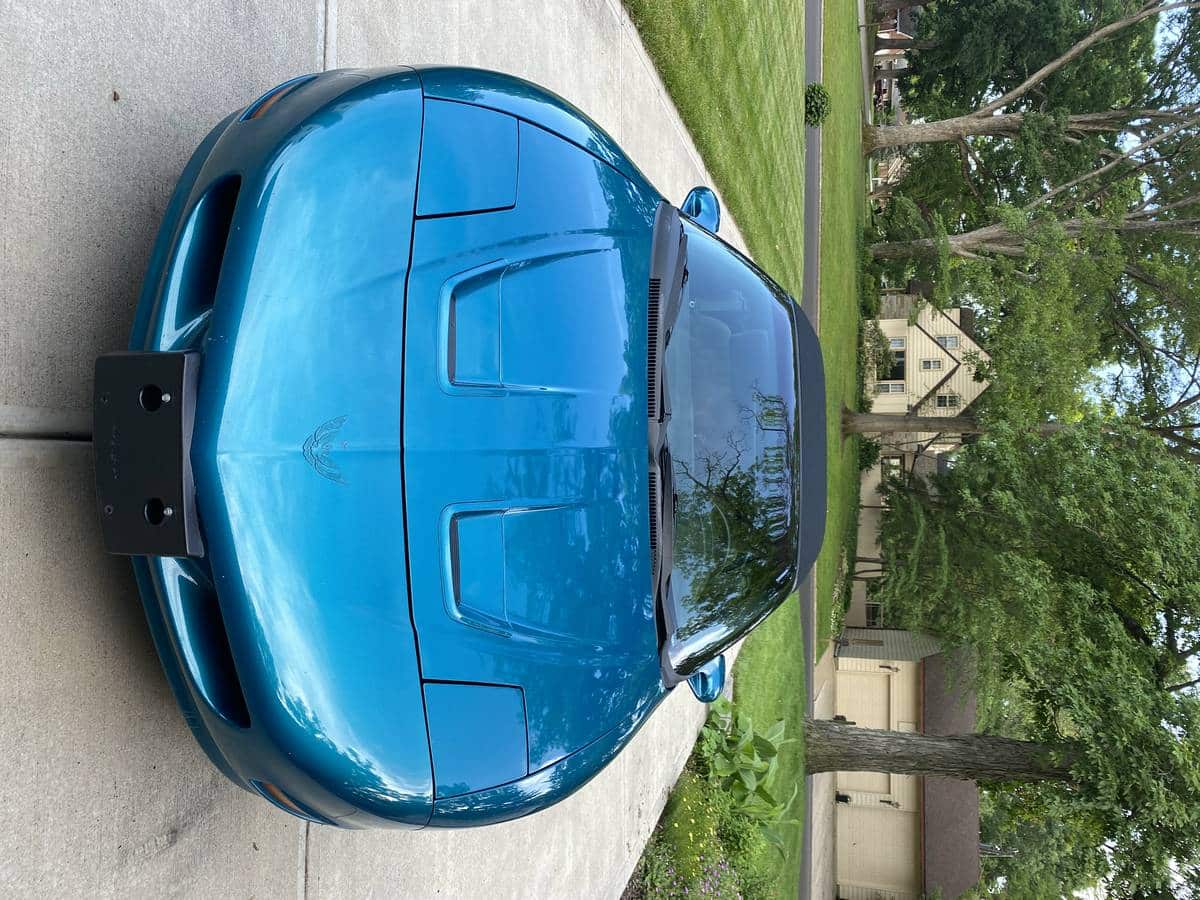 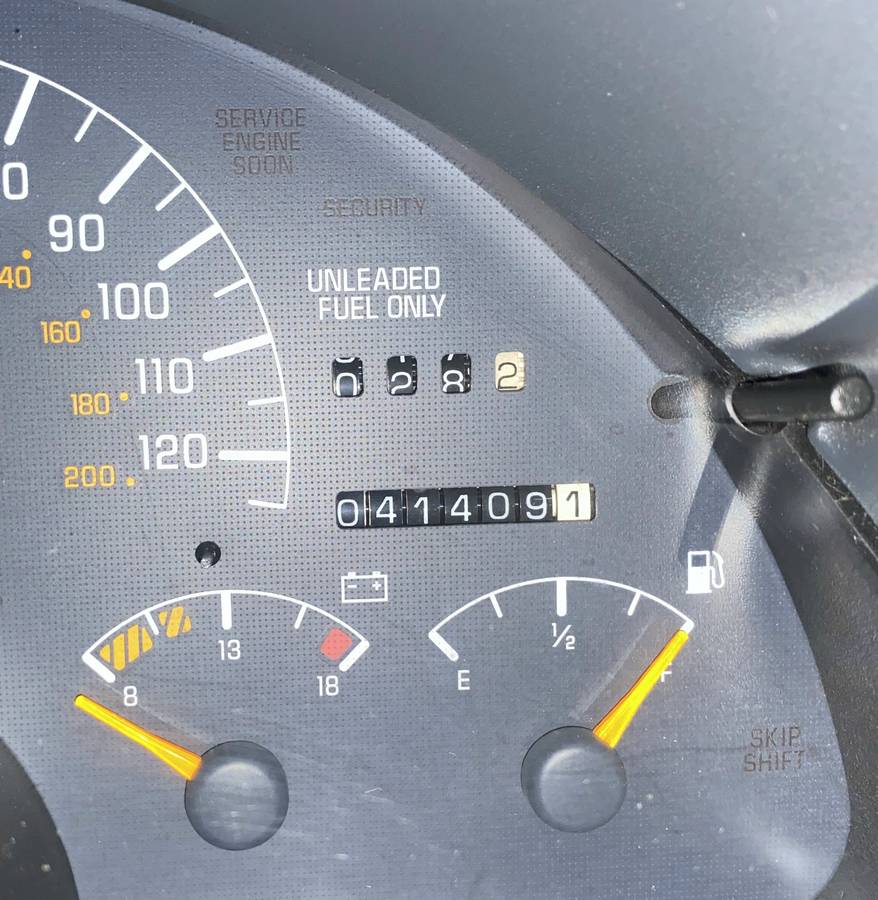 “Dude, you bought a Chick Car.” These are the worst words a guy can hear the first time they show off their new car to friends and co-workers. Unfortunately, that’s what I repeatedly heard shortly after I bought a brand new Bright Aqua Metallic 1997 Pontiac Sunfire convertible. Pontiac called the same shade Medium Teal Blue Metallic on Firebirds.  This 1996 Pontiac Firebird convertible currently listed here on Craigslist in Layfayette, Indiana (Tippecanoe) is the same color combination as my Sunfire. Haters be damned, I still love the color!  The seller states the original female owner stored the car each winter, which explains why this survivor-quality V6-powered base Firebird has only 41,688 original miles.

Currently offered for $13,737, Classic.com, the analytics and search engine for the collector car market, confirms the ask is slightly below the one-year rolling average of this guide’s summary for fourth-generation Pontiac Firebirds produced between 1993 and 2002. In this particular instance, the values in this guide are heavily influenced by more expensive Formula and Trans Am models.  By clicking on the green dots in the graph below, you can navigate to each comparable car sold as a way to help you evaluate the price of the Firebird featured here:

As a second data point, the  Hagerty Insurance Online Valuation Tool reveals the seller’s ask falls between this guide’s #2 “Excellent” estimate of $10,000 and its #1 “Concours” appraisal of $14,000 after factoring out a ten percent deduction for the less desirable automatic.

Launched for the 1993 model year, the fourth-generation Firebird amplified the aerodynamic styling initiated by the previous generation. While the live rear axle and floorpan aft of the front seats remained largely the same, ninety percent of the Firebird’s parts were all-new. Overall, the styling of the Firebird more strongly reflected the Banshee IV concept car than the 1991 “facelift” did. As with the Camaro, major improvements included standard dual airbags, four-wheel anti-lock brakes, 16-inch wheels, rack-and-pinion power steering, short/long-arm front suspension, and several non-rusting composite body panels. Throughout its fourth generation, trim levels included the V6-powered Firebird, V8-powered Formula, and Trans Am. Standard manual transmissions were the T5 five-speed manual for the V6s and Borg-Warner′s T56 six-speed manual for the V8s. The 4L60 four-speed automatic was optional for both in 1993, becoming the 4L60E with built-in electronic controls in 1994.

From 1993 until 1995, Firebirds sold outside of California received a 160 horsepower 3.4 L V6, an enhanced version of the third generation’s 3.1 Liter unit. Beginning mid-year 1995 onward, a Series II 3.8 L V6 with 200 horsepower became the Firebird’s sole engine. From 1993 until 1997, the sole engine for the Formula and Trans Am was the 5.7 L LT1 V8, essentially identical to the LT1 in the C4 Corvette except for more flow-restrictive intake and exhaust systems. Steering wheel audio controls were included with optional uplevel cassette or compact disc stereo systems.

The 1995 models were the same as those of previous years, but traction control (ASR: acceleration slip regulation) was available for LT1 Firebirds, controlled by a switch on the console. The steering wheels in all Firebirds were also changed; their optional built-in audio controls were more closely grouped on each side. The “Trans Am GT” trim level was dropped from the lineup after its model year run in 1994. For 1995, all Trans Ams received 155-mph speedometers and Z-rated tires. 1995 was also the first year of the vented version of the Opti-Spark distributors on LT1 F-cars, addressing a common mechanical fault with the unit. The ‘transmission perform’ button was available only in the 1994 and 1995 Formula and Trans Am. This option was stopped for the 1996 and later models, but the unused connections remain available for 1996 and 1997 Formula and Trans Am. While 1995 cars still used the OBD-I (on-board diagnostic) computer system (the last year of any American car including the F-body to use OBD-I), a majority of them had OBD-II connector ports under the dash.

Firebird performance levels improved for 1996, with the establishment of the stronger 200-hp 3.8 L V6 as the new base engine, and the power rating of the LT1 increased to 285 for 1996, due to its new dual catalytic-converter exhaust system. 1996 was also the first model year of the OBD-II computer system. Optional performance enhancements were available for each Firebird trim level; the Y87 performance packages for V6s added mechanical features of the V8 setups, such as four-wheel disc brakes, faster-response steering, limited-slip rear differential, and dual tailpipes.

The Dead Media Group YouTube Channel features this 1997 Pontiac Firebird commercial highlighting the choice of either convertible or T-Tops for open-air thrills:

Reading the description, we get a vibe the seller of this 1996 Pontiac Firebird convertible for sale wrote their listing in the third person and that she is, in fact, the original owner.  The only thing we don’t like about this car is the disconnected air conditioning. Spend the money and get the system fixed, especially when asking top dollar for what is otherwise a nicely preserved, low-mileage survivor car.

If you are serious about buying this Firebird, you can start the conversation by calling Heidi at (786) 385-4301.  When you connect, please remember to mention you saw her Ontiac convertible survivor featured here on GuysWithRides.com. Good luck with the purchase!

“This is a very special classic car for the right person!!!
There was a limited number of these magical Teal Blue Metallic color convertible’s made.

It is currently kept in a garage when not being used, and the previous owner never even drove it in the rain!
She stored it each year in the winter months.

For are a convertible that is over 26 years old, the amount of knicks & dings in the paint job are very minor. There is some spider cracking in the bonnet. Also, the previous owner did disconnect the A/C-as she thought there was no need, since it’s made to ride with the wind in your hair:)

This ride comes with convertible boot side cover panels, as shown in the photos.

It’s a delightful ride, with extremely low mileage. If you feel this car is meant for you, please reach out anytime.”

Show or go: What would you do with this 1996 Pontiac Firebird Convertible for sale?  Please comment below and let us know!