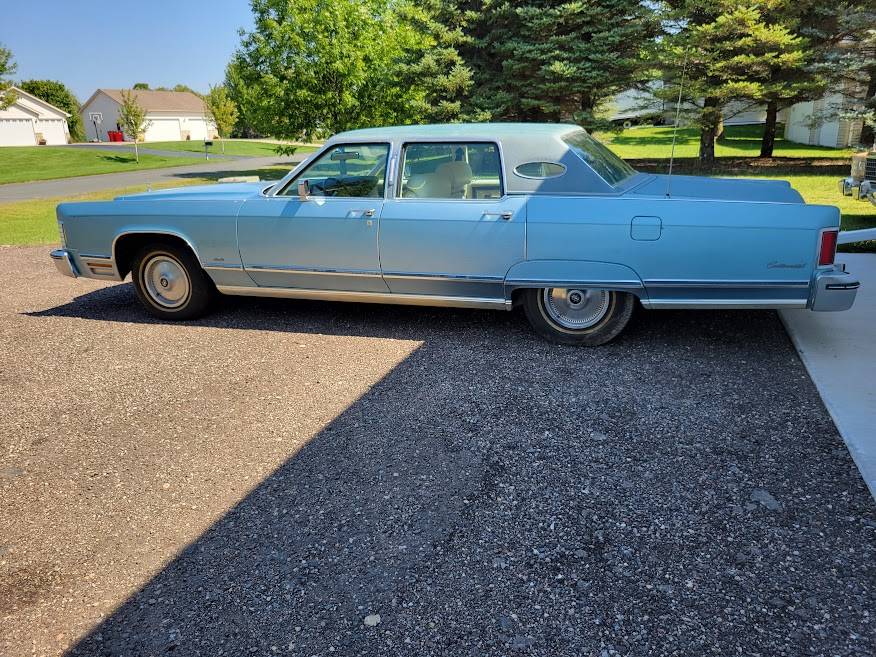 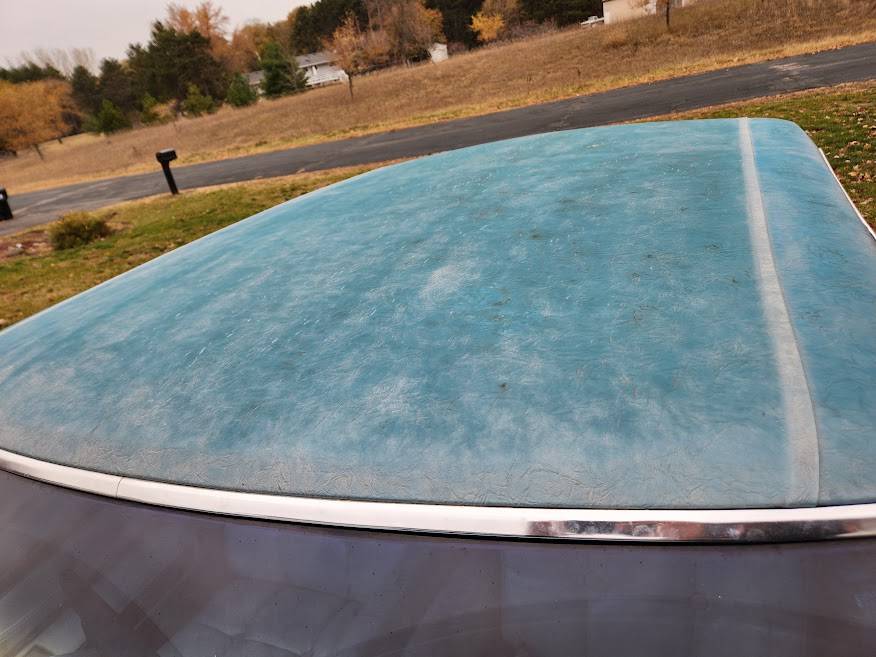 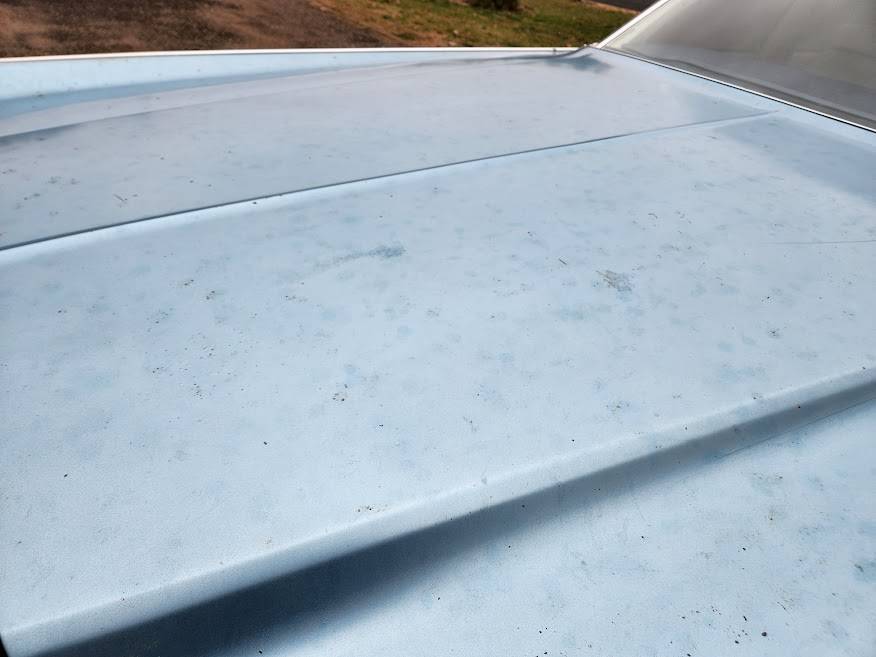 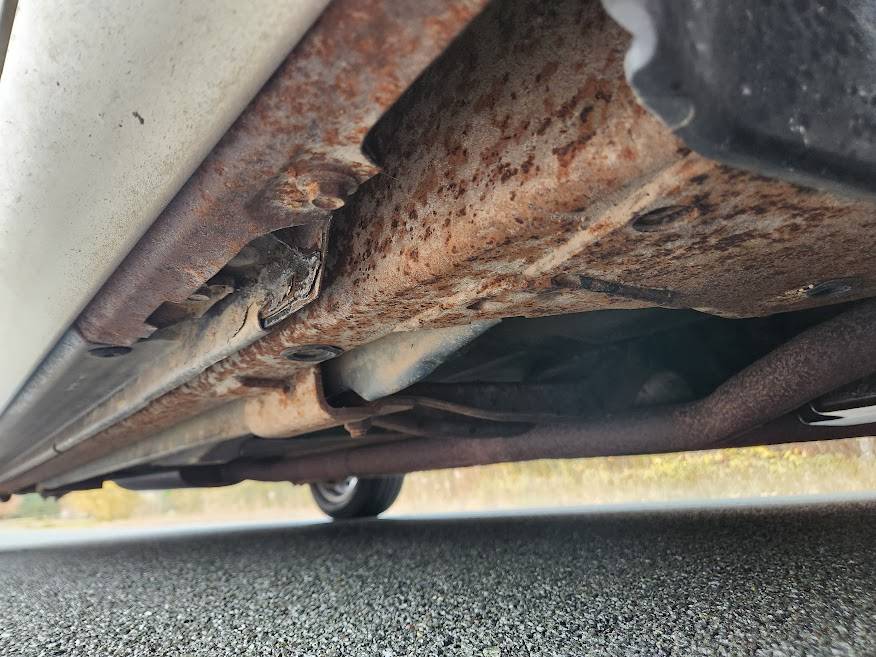 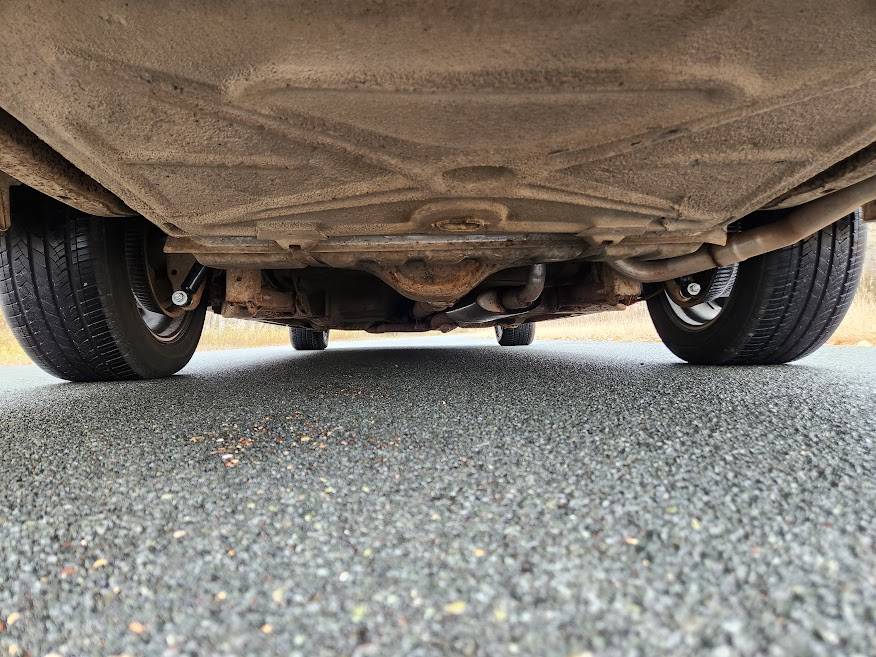 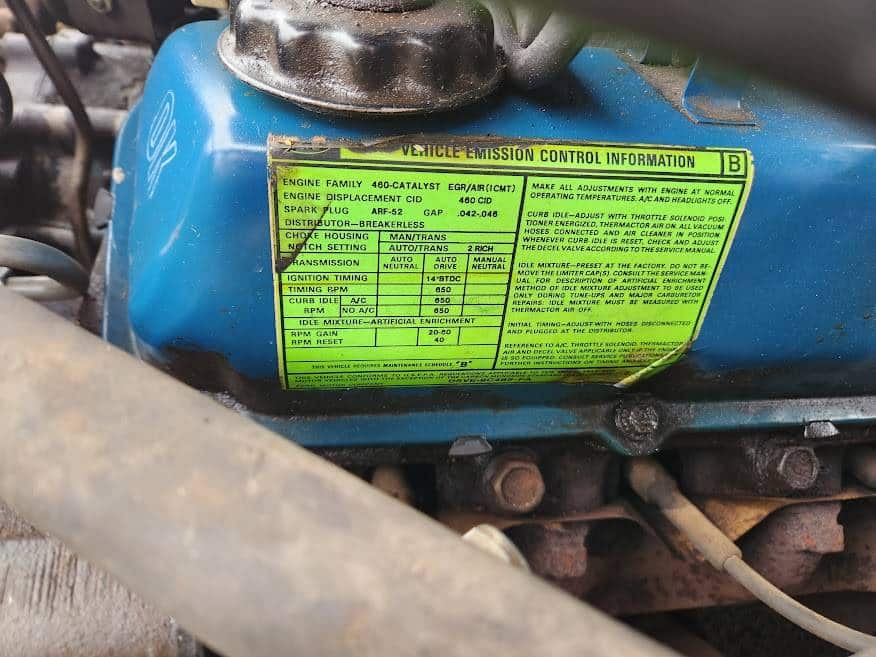 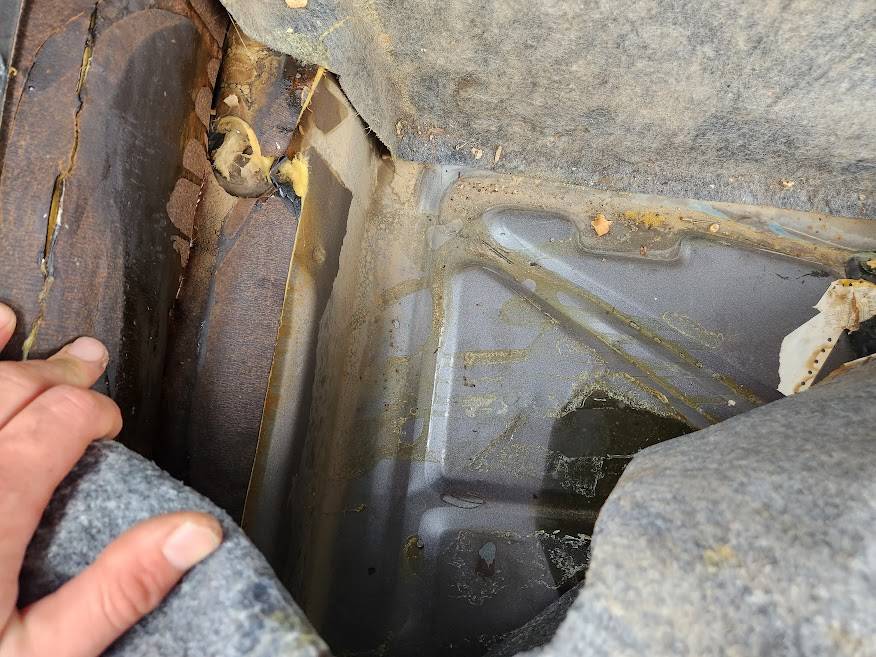 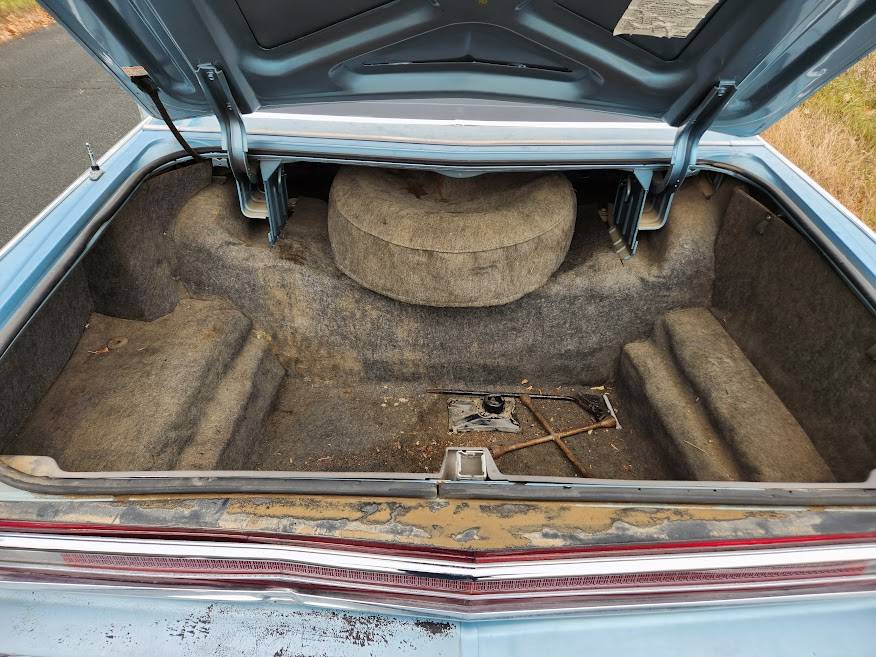 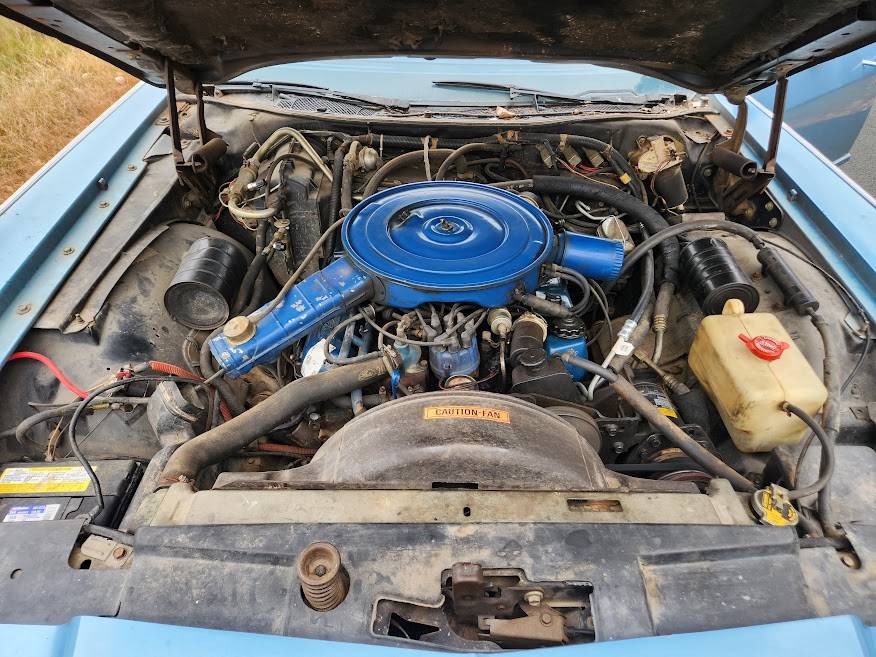 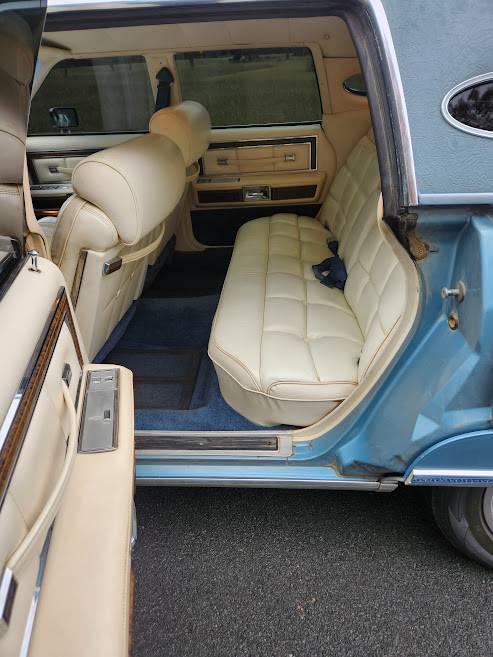 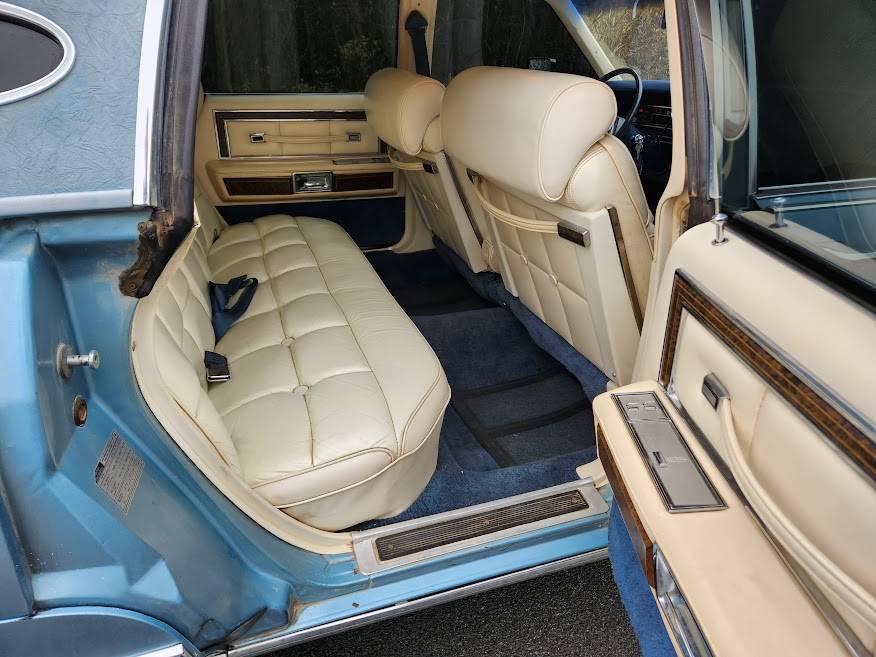 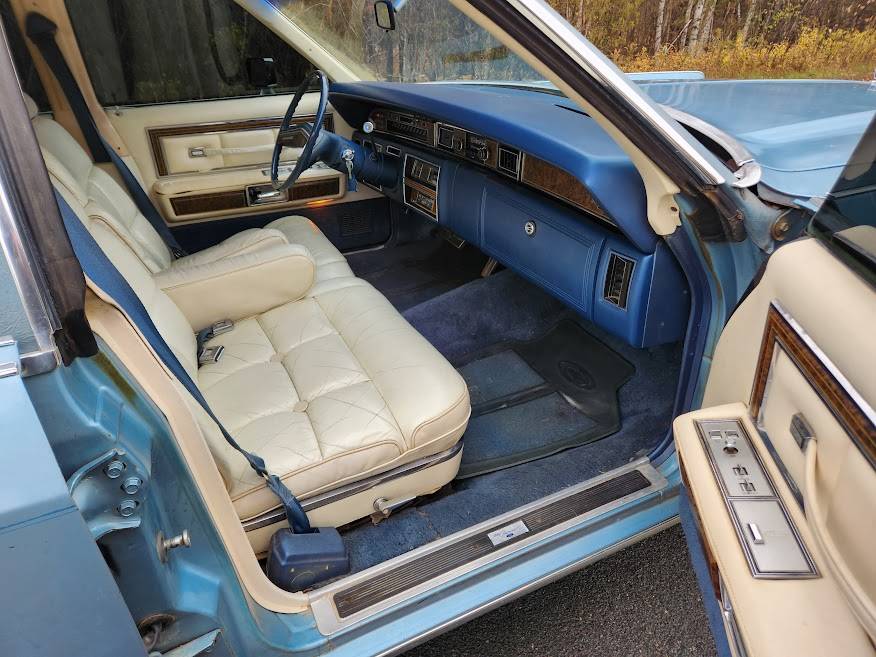 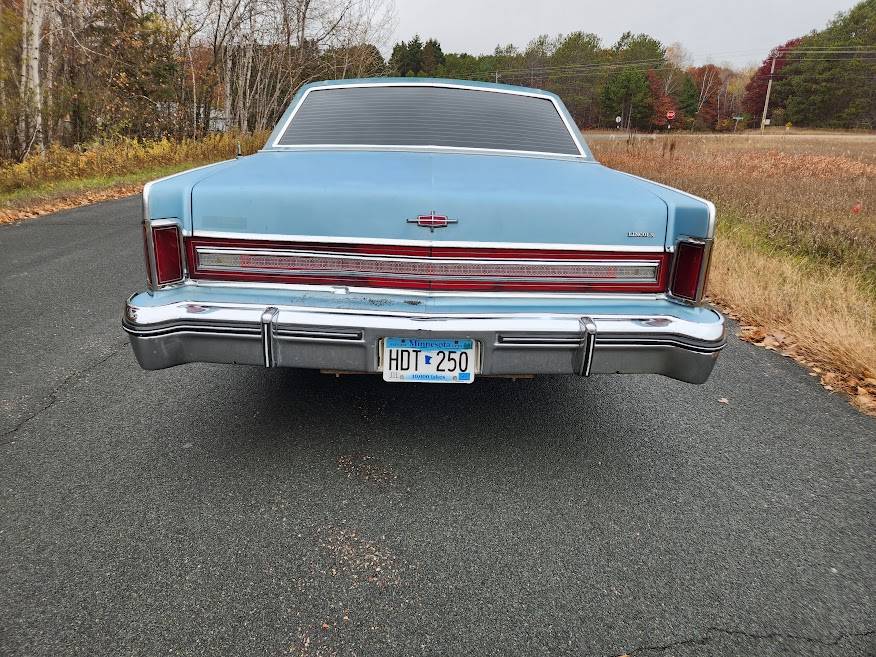 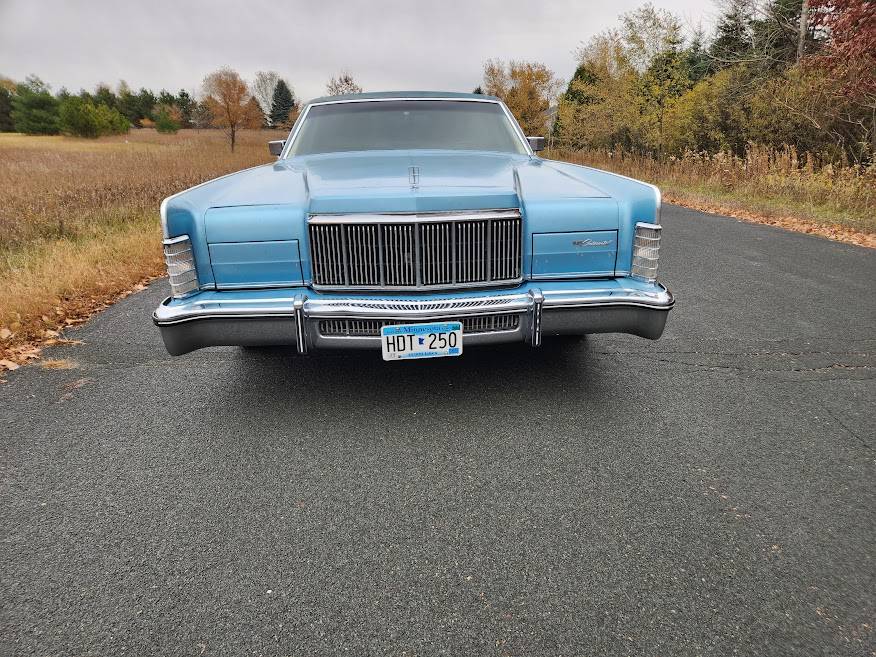 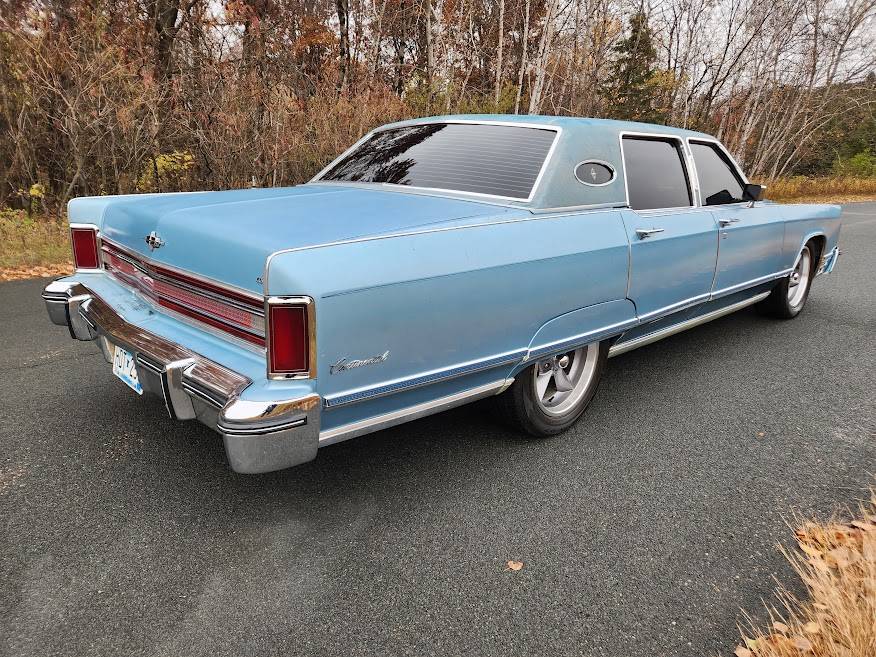 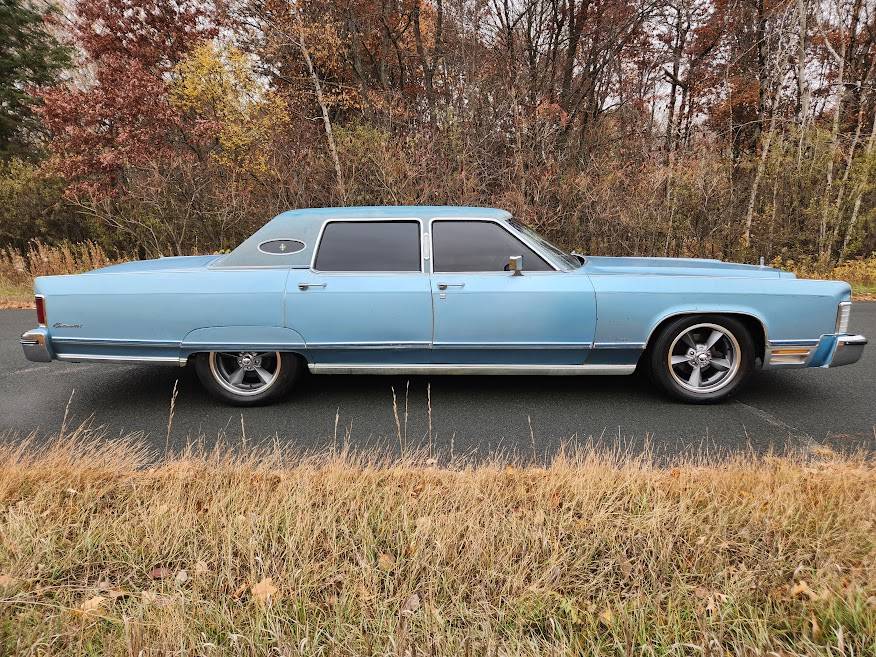 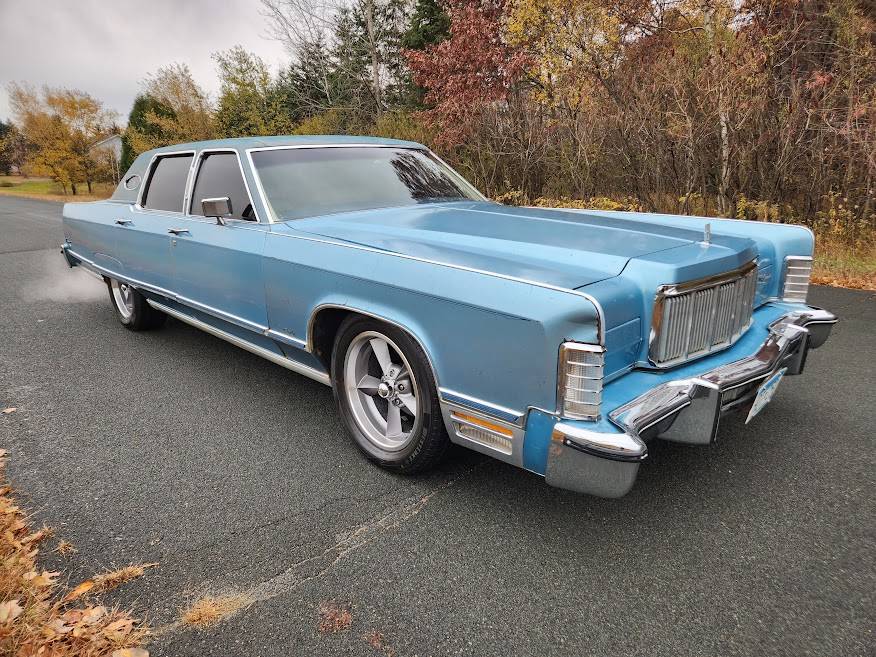 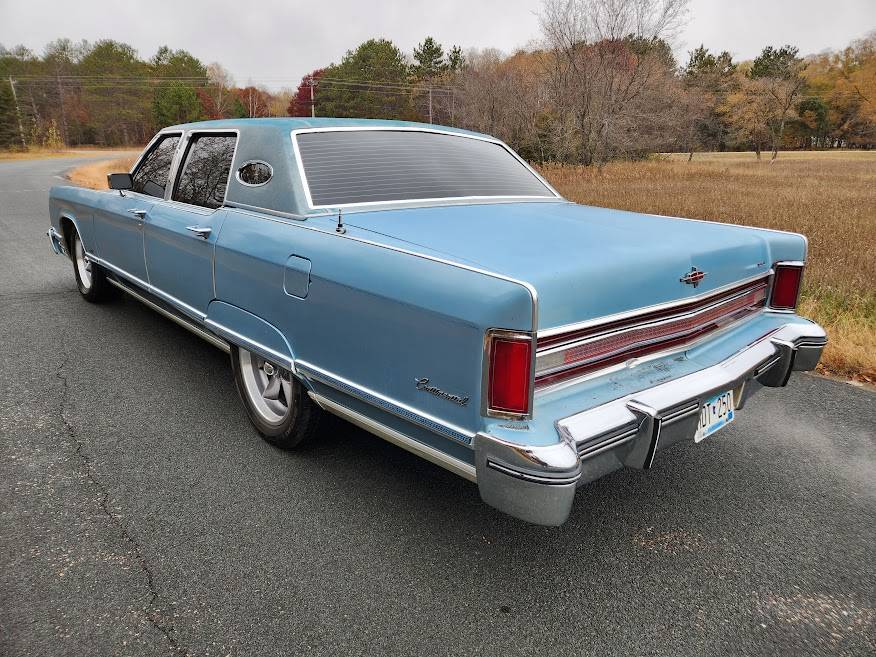 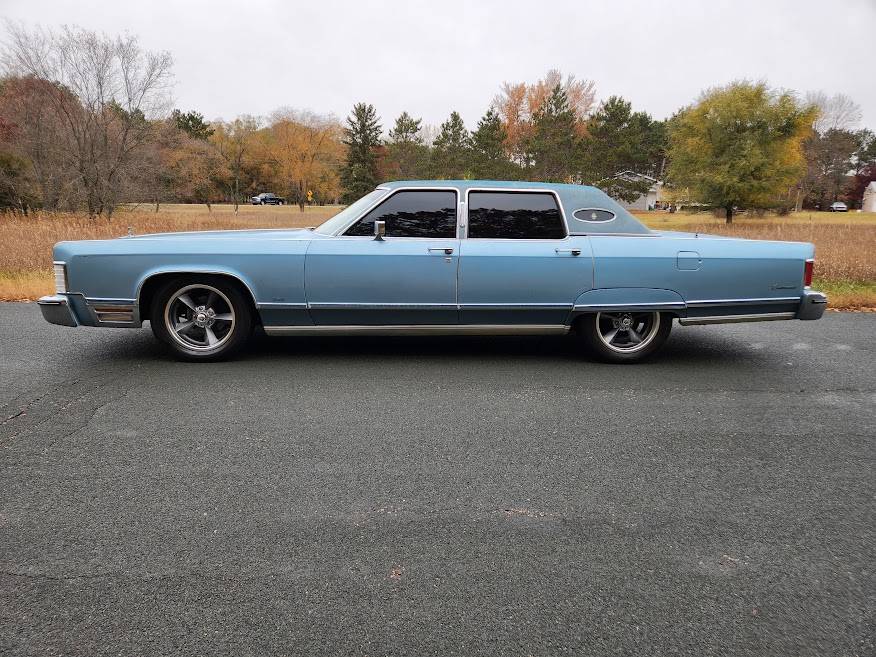 November 26, 2022 Update – The seller replaced their original listing with a fresh Craigslist ad. While the pictures and description remain the same, the seller lowered their asking price from $5,700 to $5,000.

With many rusted roller projects now fetching over ten thousand dollars, it’s becoming increasingly difficult for collector car enthusiasts to find running and rust-free classic cars for bargain basement money. This 1975 Lincoln Continental Town Car, listed here on Craigslist near Minneapolis, Minnesota, restores our faith that some enthusiasts can still be realistic when pricing their car for sale.  This car offers a solid, well-optioned four-door hardtop with a stout powertrain that you can enjoy with five of your friends or family.  The next caretaker can enjoy the car at the price being offered, knowing they will likely at least break even when they decide to sell it in the future.

Currently offered for $5,000 (the original ask was $5,700), Classic.com, the analytics and search engine for the collector car market, confirms the ask is well below the one-year rolling average of this guide’s summary for fifth-generation Lincolns produced between 1970 and 1979.  By clicking on the green dots in the graph below, you can navigate to each comparable car sold as a way to help you evaluate the price of the Town Car featured here:

For the 1970 model year, Lincoln introduced the fifth-generation Lincoln Continental. Building on the success of the Mark III introduced the year before, Lincoln sought to modernize the Continental for the 1970s after a nine-year production run.  Although shorter in wheelbase and slightly narrower than 1958–1960 Lincolns, the addition of 5-mph bumpers make 1977–1979 Lincolns the longest automobiles ever produced by Ford Motor Company.

The fifth-generation Lincoln Continental reverted to body-on-frame construction, the first Lincoln to do so since 1957. To save on its engineering and development costs, the Continental was no longer given its own chassis, instead given a longer-wheelbase version of the Mercury Marquis chassis (stretched from 124 inches to 127 inches; 1974–1979 vehicles received a 127.2-inch wheelbase).  Shared with the LTD and Marquis, the Continental was equipped with coil springs at all four corners.

In a major departure from its fourth-generation predecessor, the 1970 Lincoln Continental’s Marquis-based frame forced the sedan to abandon “suicide doors” for conventional front-hinged doors. As with its predecessor and the Mercury Marquis, the Lincoln Continental was offered as a two-door hardtop and as a four-door “pillared hardtop” sedan (B-pillar with frameless door glass). Unlike Ford or Mercury, no Lincoln two-door convertible was introduced.  Shared with the Mark series, the fifth-generation Continental was equipped with vacuum-operated hidden headlamps; as a fail-safe, the headlamp doors were designed to open in the event of failure (a dashboard indicator light indicated their status).

After 5 years on the market, Lincoln extensively revised the Continental. Coinciding with the 1975 introduction of the Mercury Grand Marquis, Lincoln and Mercury sought to better visually differentiate their two flagship model lines despite their mechanical commonality. As part of the revision, the Lincoln Continental adopted a greater degree of styling commonality with the Continental Mark IV. In 1975, the exterior of the Lincoln Continental underwent a major revision. Although the body below the beltline saw only minor change with the taillights redesigned with vertical units, the roofline was completely restyled. To separate itself from the Mark IV, the two-door Continental/Town Coupe adopted a fully pillared roofline with a square opera window in the C-pillar. In place of the pillared hardtop shared with the Mercury Marquis and Ford LTD, the four-door Continental/Town Car adopted a wide B-pillar; to distinguish itself from the Cadillac Sixty Special Brougham; Town Cars were given the oval opera window introduced on the Mark IV. Along with the styling upgrades, 1975 Lincolns received substantial upgrades to the braking system. Designed by Bendix, the Lincoln Continental became one of the first American cars equipped with an optional 4-wheel disc brake system. To further improve the emissions performance of the 460 V8, the engine was fitted with catalytic converters, ending its compatibility with leaded regular gasoline.

The combination of the seller’s detailed description and extensive photographs confirm their 1975 Lincoln Continental Town Car for sale is a solid, if somewhat Patina’d example.  With a very realistic asking price, this is a great entry-level pass into the world of classic car ownership that can be enjoyed while you slowly restore the car, if you so choose to.

If you are serious about buying this Continental, you can start the conversation by emailing the seller.  When you connect, please remember to mention you saw their Lincoln featured here on GuysWithRides.com. Good luck with the purchase!

NO TRADES, ABSOLUTELY NONE, dont even ask! Just Cash. NO LOW BALL OFFERS.

-I got this car las year in an estate auction. The original owner was a Ford and Lincoln enthusiast who had nearly 40 of them in a collection stored inside. Drove and maintained them all and never sat in the weather or used in the salt (on MN/SD border where salt typically isnt used. This one has an oil change sticker in it from 1989 at 76k miles and another in 2011 at 84,2xx miles and the car now has 84,9xx miles so only 700 miles put on it in the last 11 years. It is a true “Barn Find”. Ive put on about 500 of those miles in the last year.

-Car is equipped with the 460 Big Block V8 engine and I believe a C6 Transmission . Mechanically the car is solid in my opinion and id drive it across country with no hesitation, Texas road trip- absolutely no worries. The engine runs as smooth as a swiss watch, It starts right up and idles perfectly, no hesitation, 4 barrel works great. The transmission shifts perfectly and nice and smooth. So smooth you cant even feel the shifts and zero hesitation. The steering is nice and drives perfectly straight down the road. The usualy steering where you can turn the steering wheel with your pinky finger. The brakes are powerful and responsive… Very powerful and with little foot pressure will put your passenger against the windshield! The suspension rides great and comfortable… rides like a driving couch… your classic “boat of a car”. I PUT NEW SHOCKS ALL OF THE WAY AROUND. Heat works great and will burn you out of the car. The A/C has been converted and it was ice cold early this year and the a/c clutch locked up (new compressors are $100 online). No vacuum leaks and the flip up headlights work flawlessly. Car can sit all winter and they wont even creep up as vacuum is lost like a lot of them do, AMAZING! Drips a little oil when sitting for some time. I replaced the cork valve cover gaskets for the updated better rubber ones. Very Healthy engine with no smoking and no smoking out of the tail pipe or anything.

For the fun and light customizing – It ALL can be reversed and have all the parts to do it. Have all 4 original hubcaps, wheels, muffler etc.
-I had 2% limo tint professionally installed all around the car.
-Car has been lowered 2 inches all of the way around.
-Brand new 18″ wheels and tires from Summit with the appropriate size for speedometer accuracy.
-Borla muffler welded in. Stock muffler is in perfect shape but I wanted a little rumble from that Big block. And honestly the Borla sounds pretty much stock still unfortunately. Nice deep rumble at idle if youre really listening for it.

-Has power windows, power locks, power seats drivers and passenger, intermittent wipers, cruise control that works perfectly, am/fm radio that works, power antenna, rear window defrost, opera windows, rear map/reading lights. The flip headlights work flawlessly. Everything works as it should for the most part. Drivers power seat sometimes has an attitude and wont go forward or backwards but usually does and does it perfectly. Radio you can switch stations but you have to use the preset push buttons as the channel knob doesnt for some reason. Passenger window goes down perfectly but needs a little assistance going up. All of the other windows work perfectly. Power locks work. Passenger power seat works. All miniscule issues that arent an issue for a 47 year old car.

-The interior is about as clean as they get for a car of its age. Car looks like it has barely been driven, very light wear on the leather. Very very clean with no major staining. Very impressed with the condition of the interior. Has the reminiscent smell of an old car that brings you joy, it does not stink or smell bad. everything is in great shape with little to light wear and no damage. Small 1.5 inch crack in the passenger rear corner plastic but its intact.

-The exterior metal work is in great shape and RUST free for 1975. No rust on the frame or under the body or in the trunk as you can see in the pictures. (trunk picture what appears to be water is glue for the carpet not water) Car has spent most of its life in Pipestone and South Dakota (no salt use). The frame is 110% solid. Passenger fender has a small dent in the tip of the front of it above the marker light. Outside of that the metal is in good shape. The paint is a lighter blue and has its patina which is SUPER COOL. It single stage paint has lost its gloss but the patina is pure awesome and makes the car cool and what it is. I was initially going to wrap it a white pearl but easily out of over 50 people ive talked to said do not and leave the original paint. It has lighter and darker areas, couple spots where it might have a flake, scratch or bubble… it is not mint or perfect but this is what gives the car its personality. I even have had the wrap to do it sitting on the bench but popular vote has been to leave it as is. The vinyl top is not ratty, torn, or majorly cracked… it is faded and 47 years old but nowhere near done yet and is pliable. Very cool nostalgic car that definitely is very healthy. EVERY TIME YOU DRIVE THIS CAR YOU WILL GET A COMPLIMENT!! I drove it yesterday to get groceries and while loading the car over 5 compliments. Every single time!

Clean and clear title in hand signed and ready to go.

Restore or Drive As Is: What would you do with this 1975 Lincoln Continental Town Car for sale?  Please comment below and let us know!