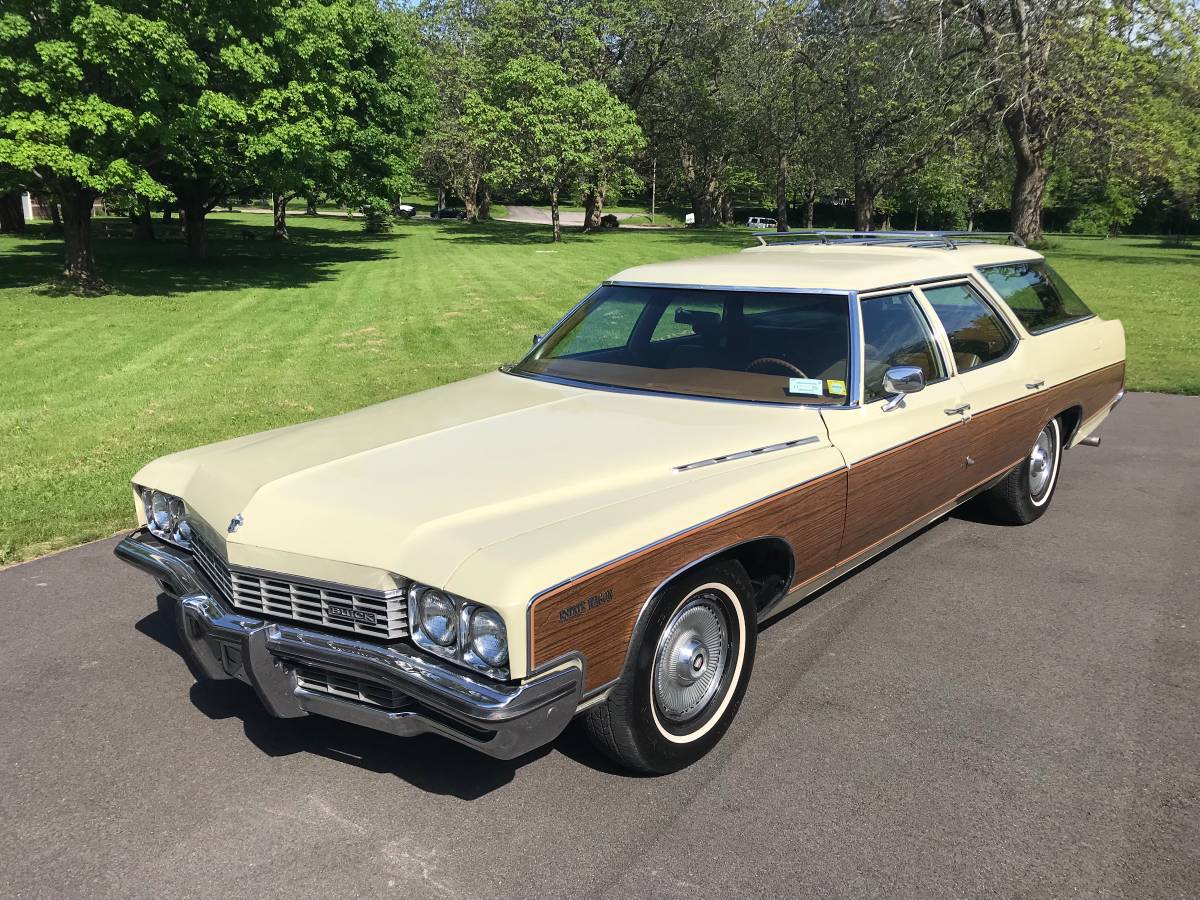 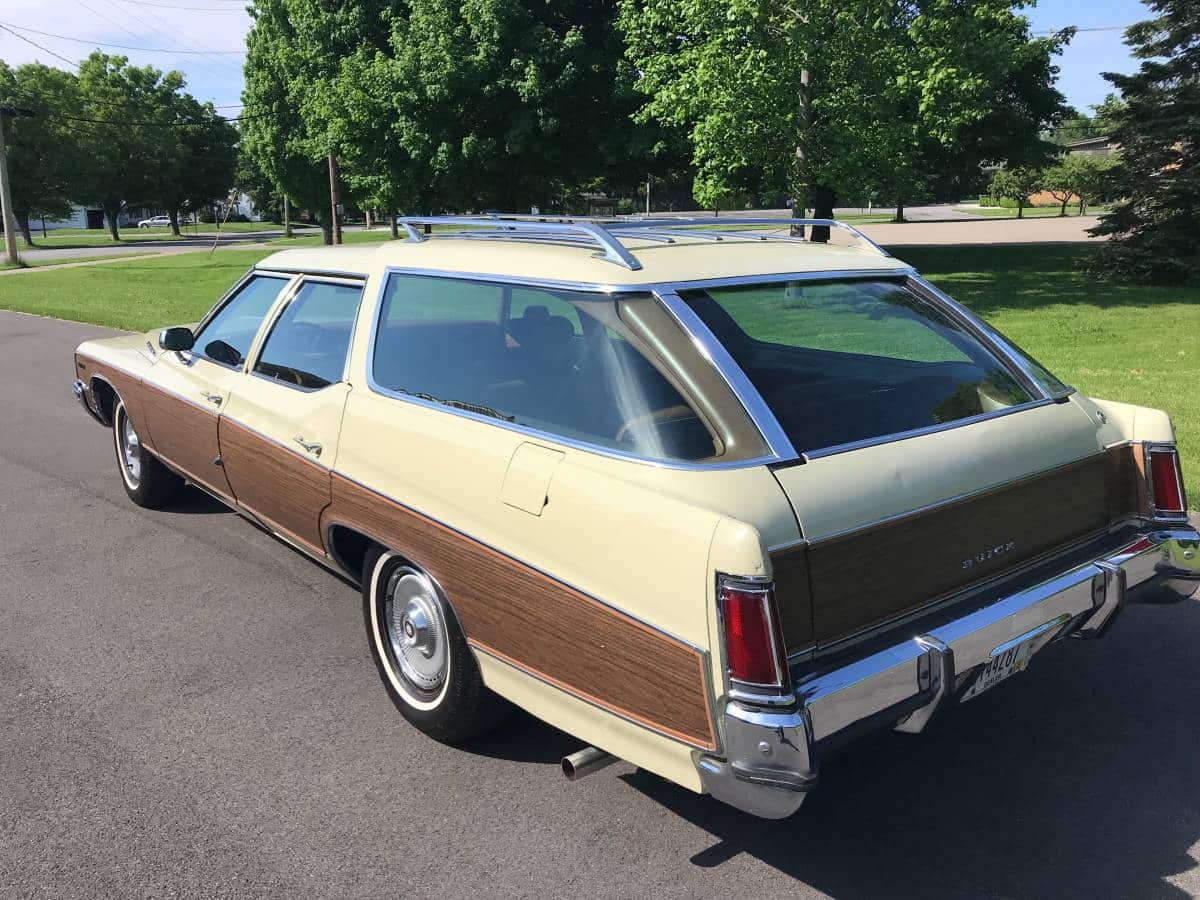 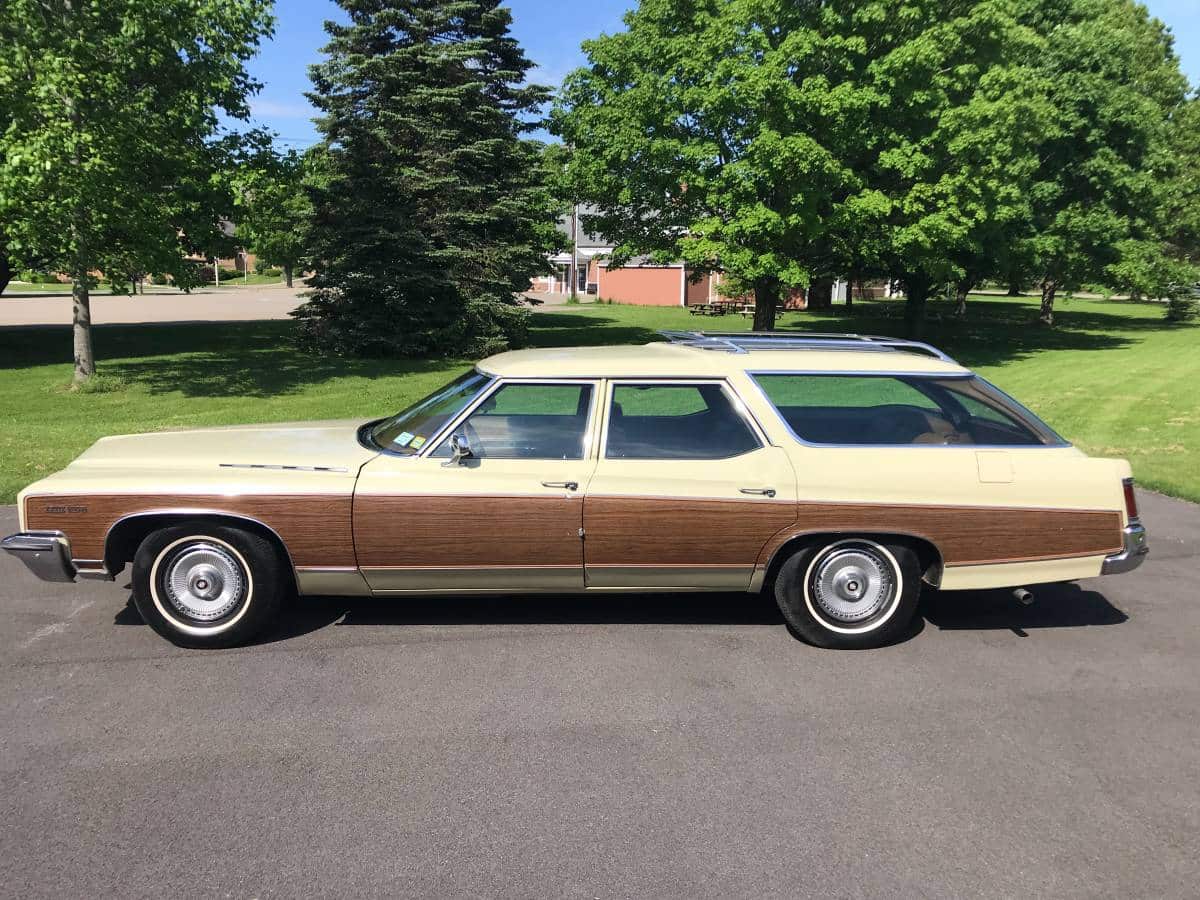 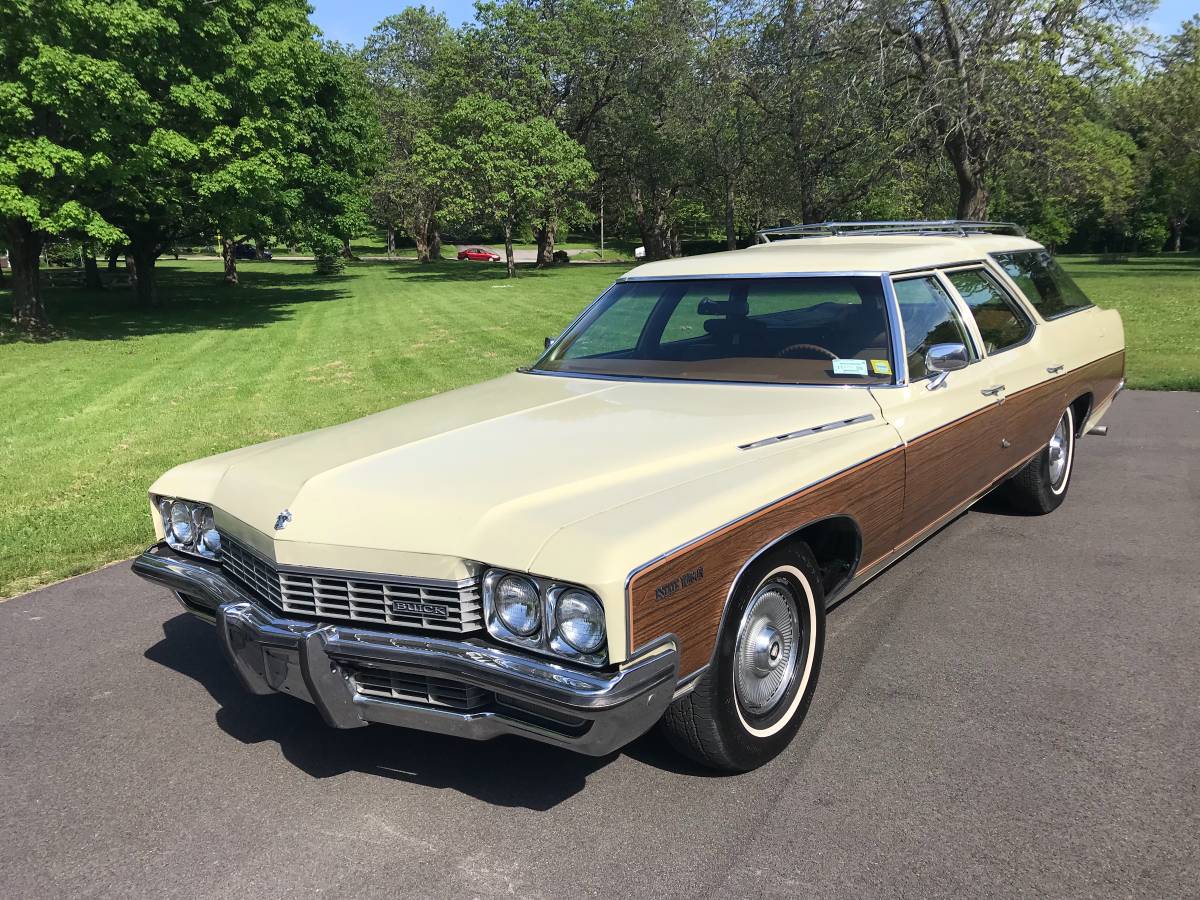 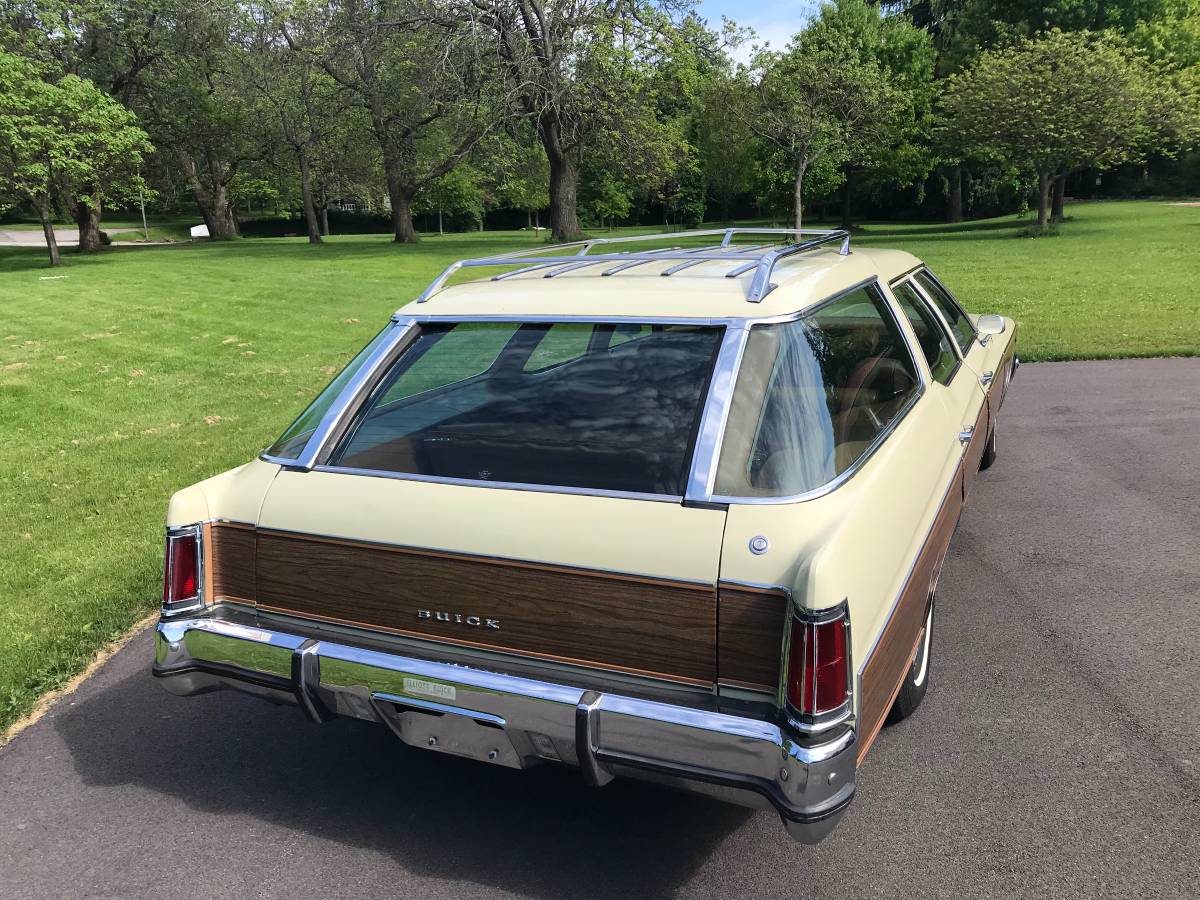 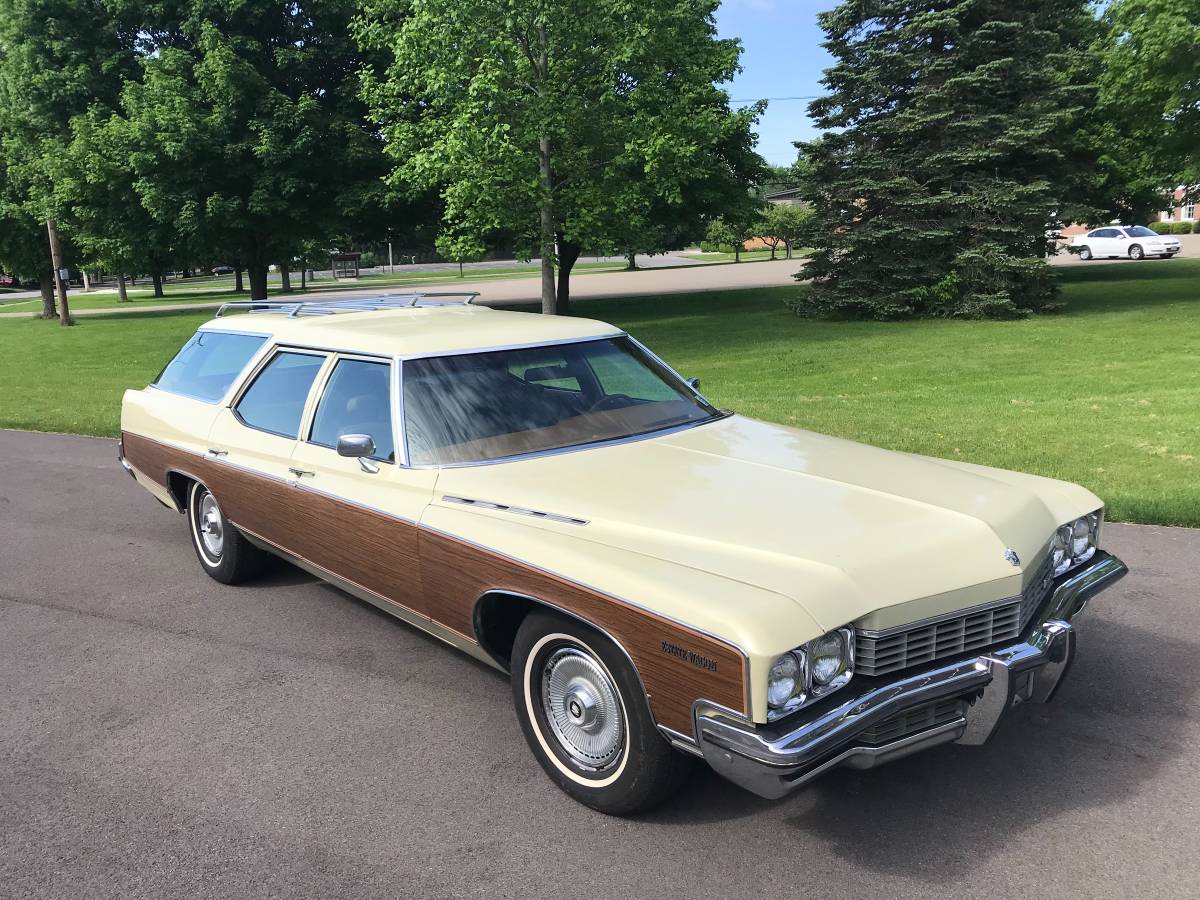 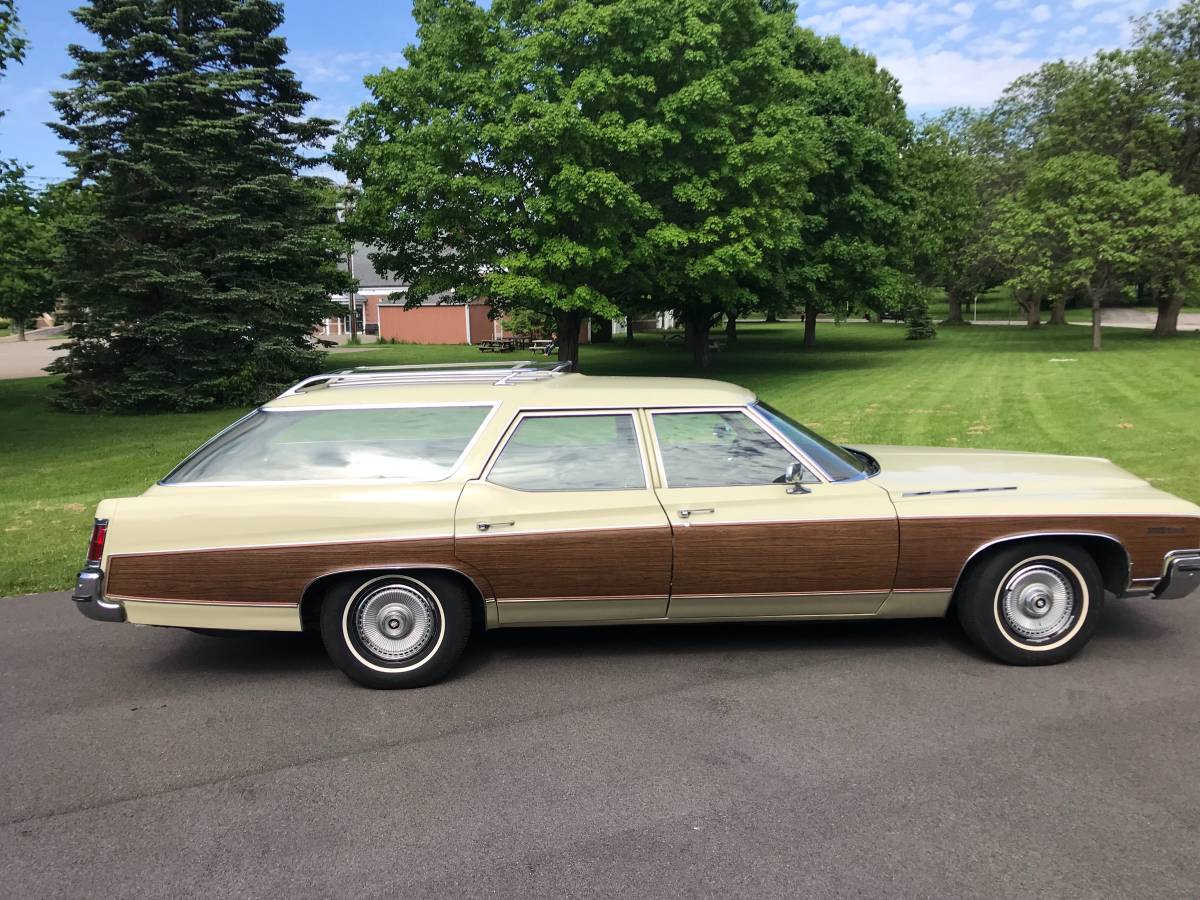 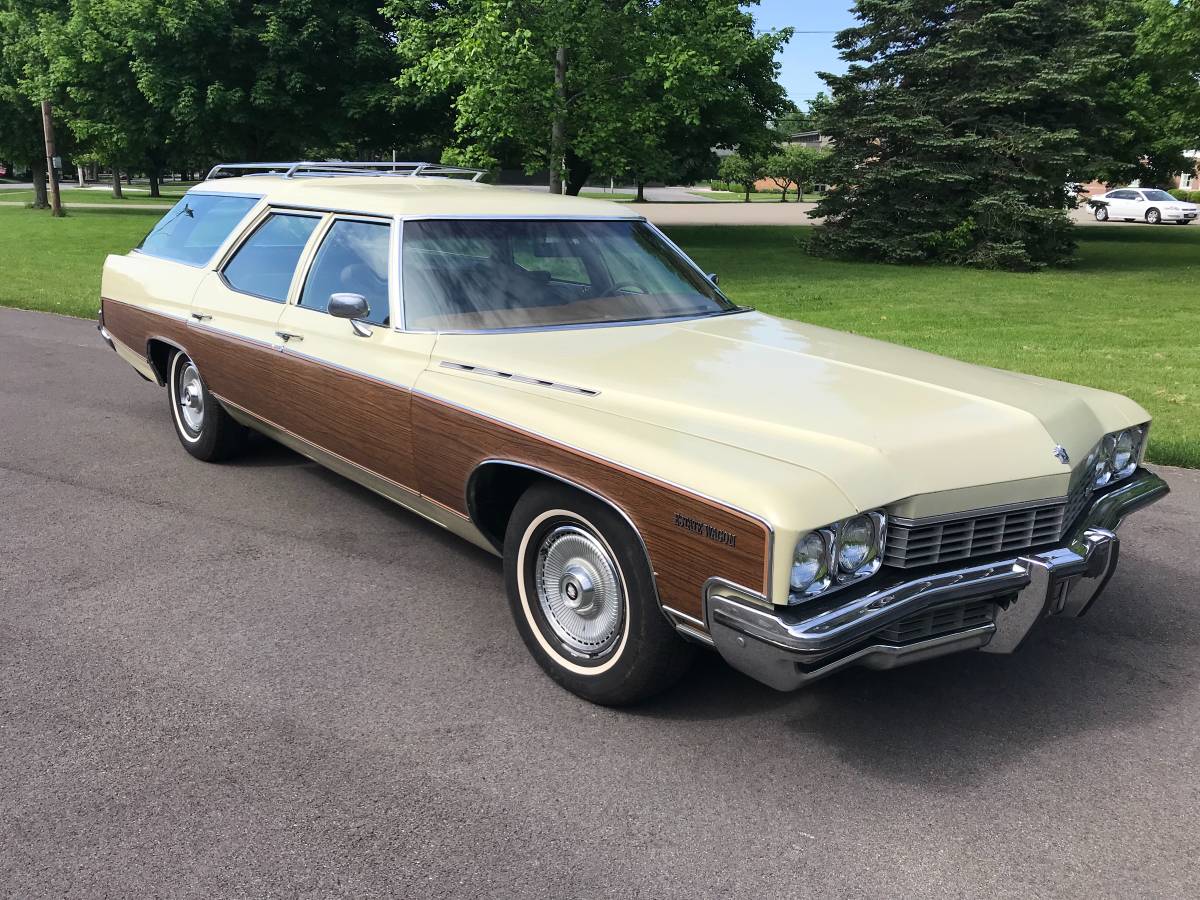 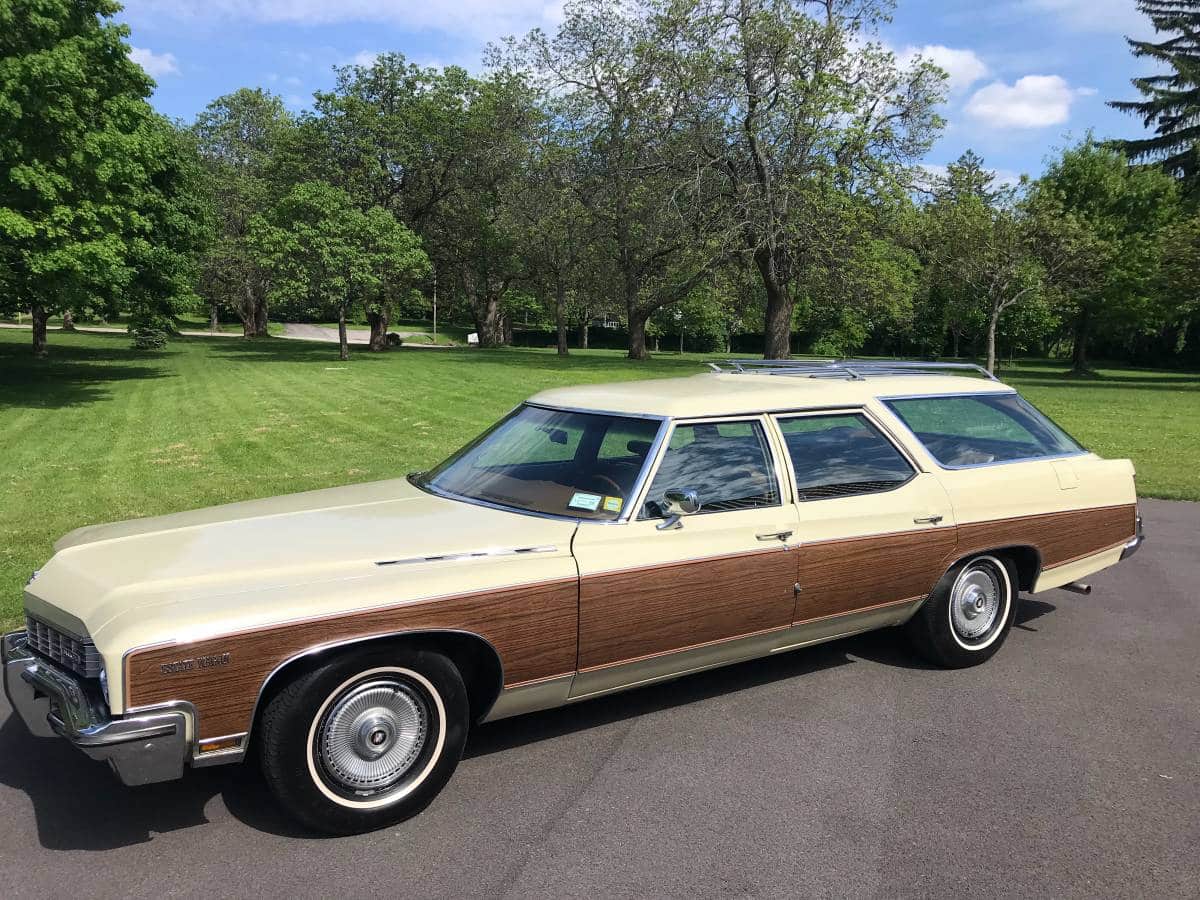 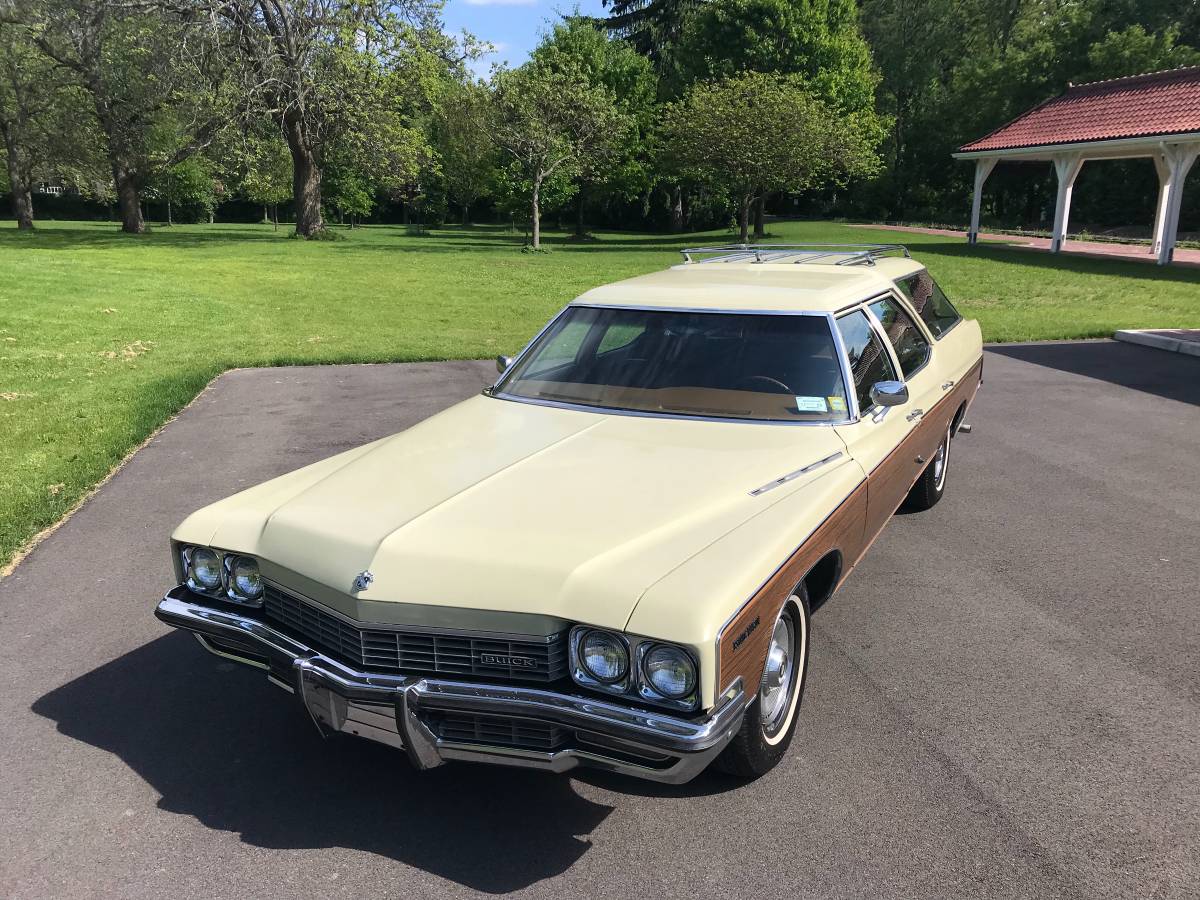 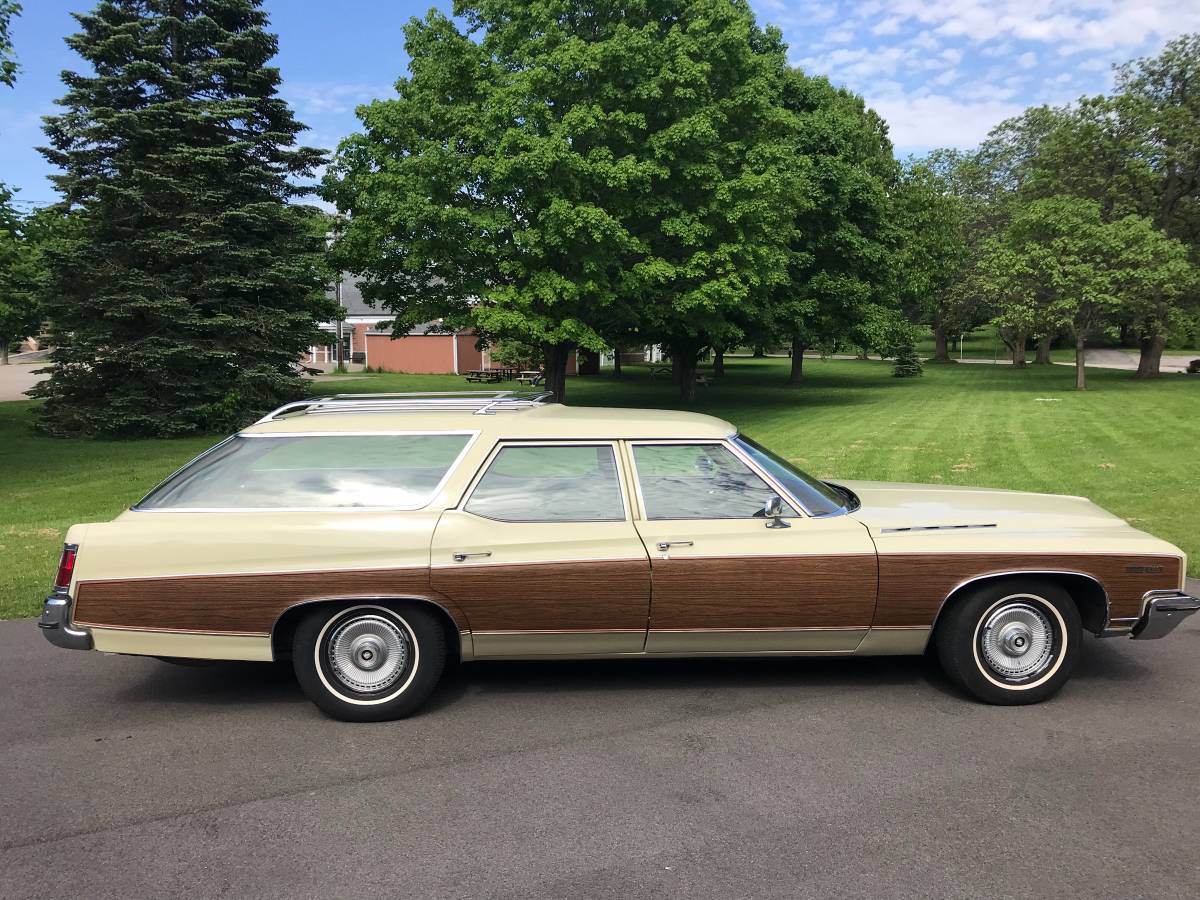 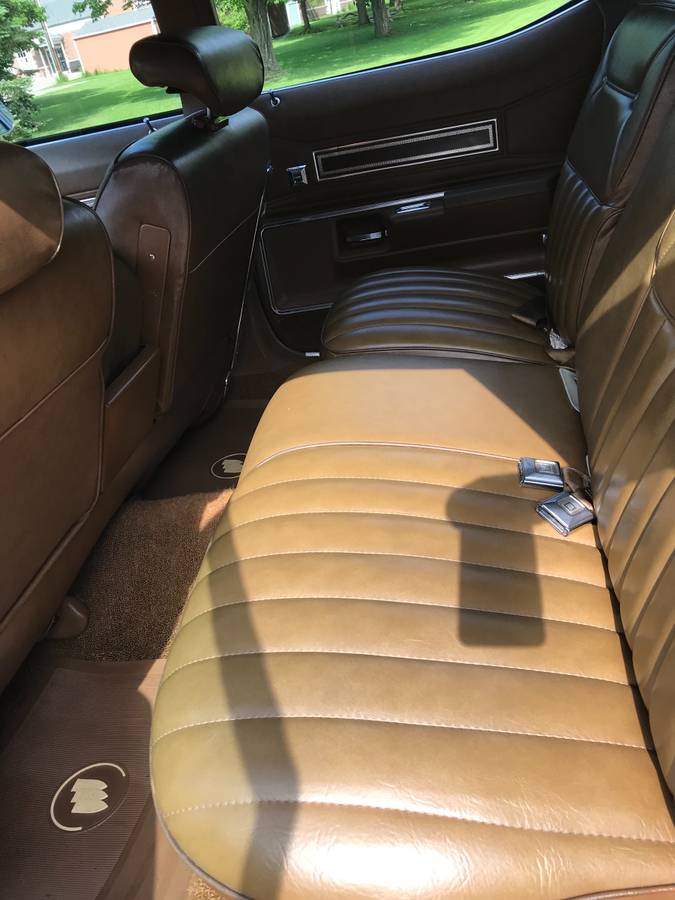 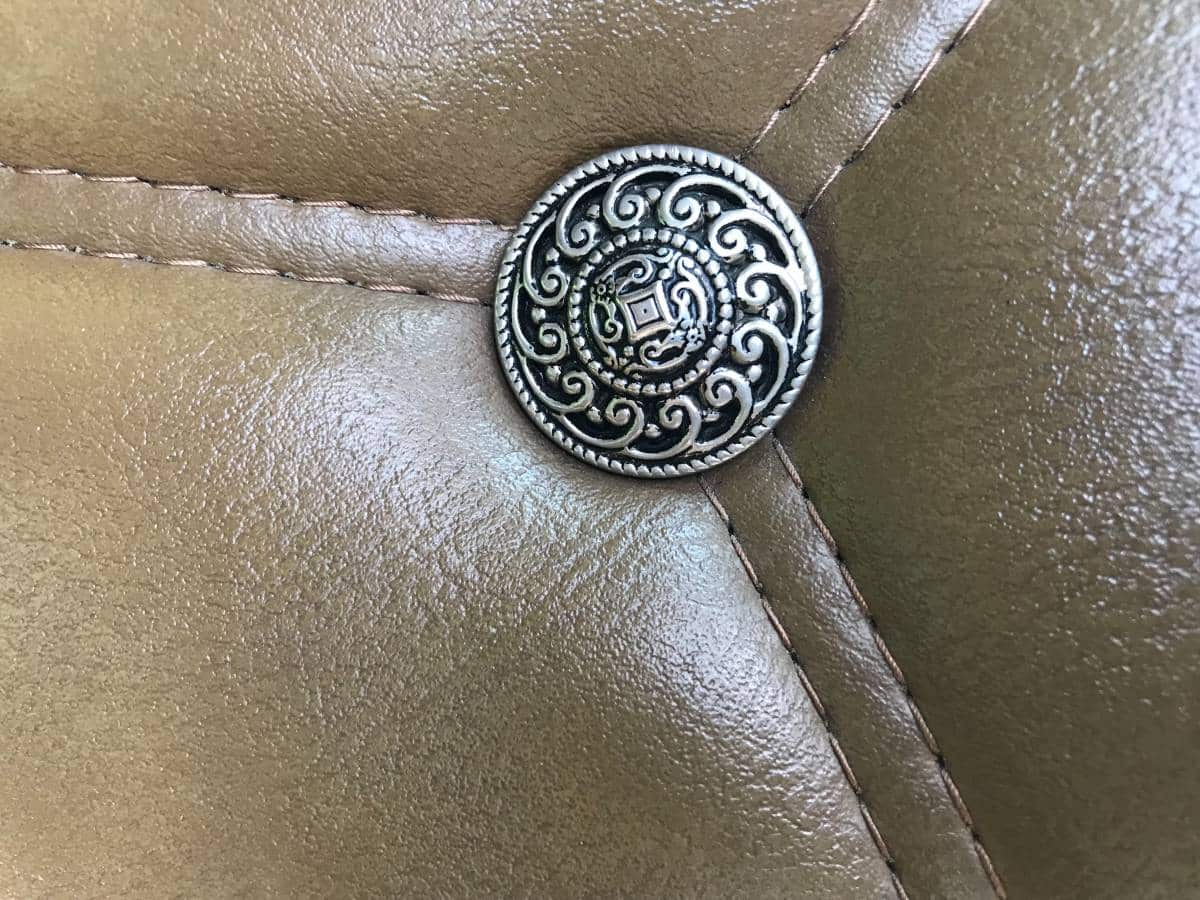 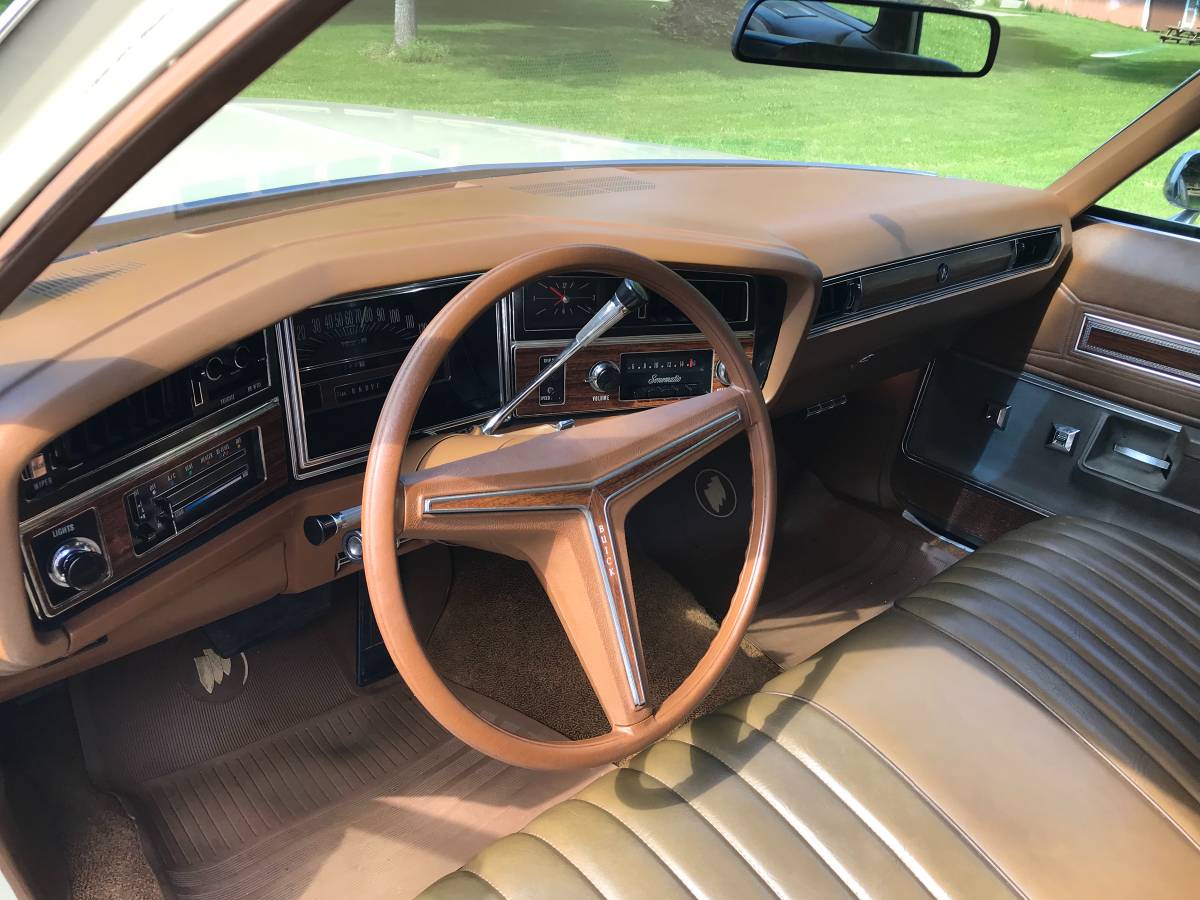 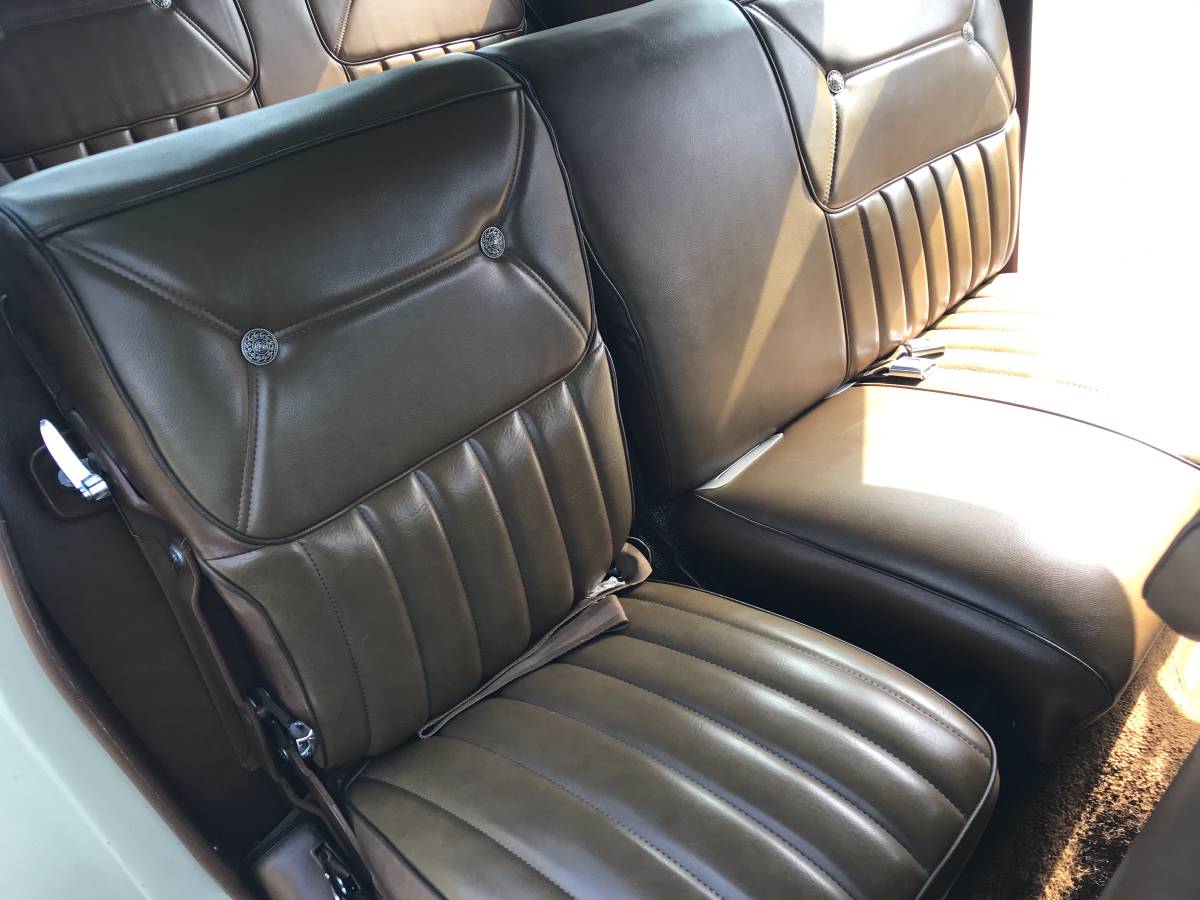 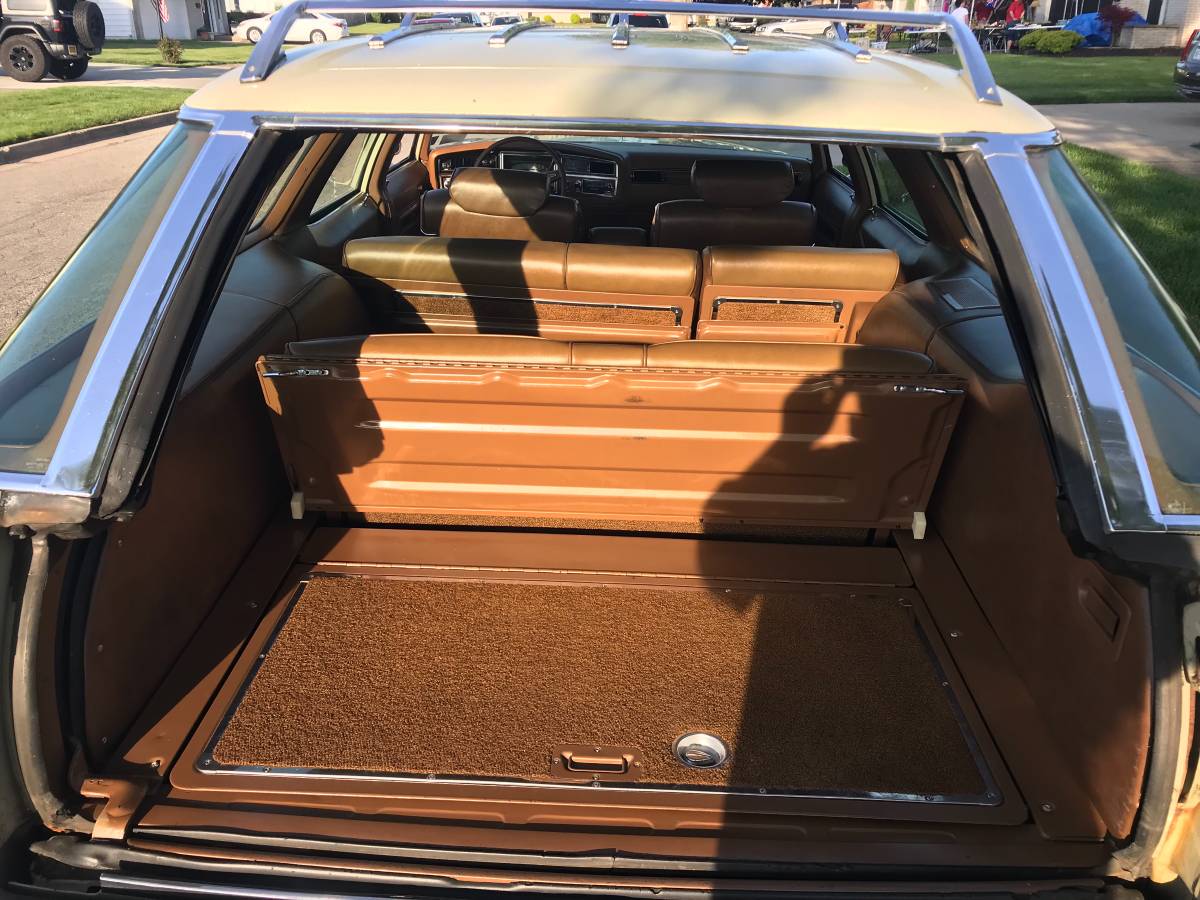 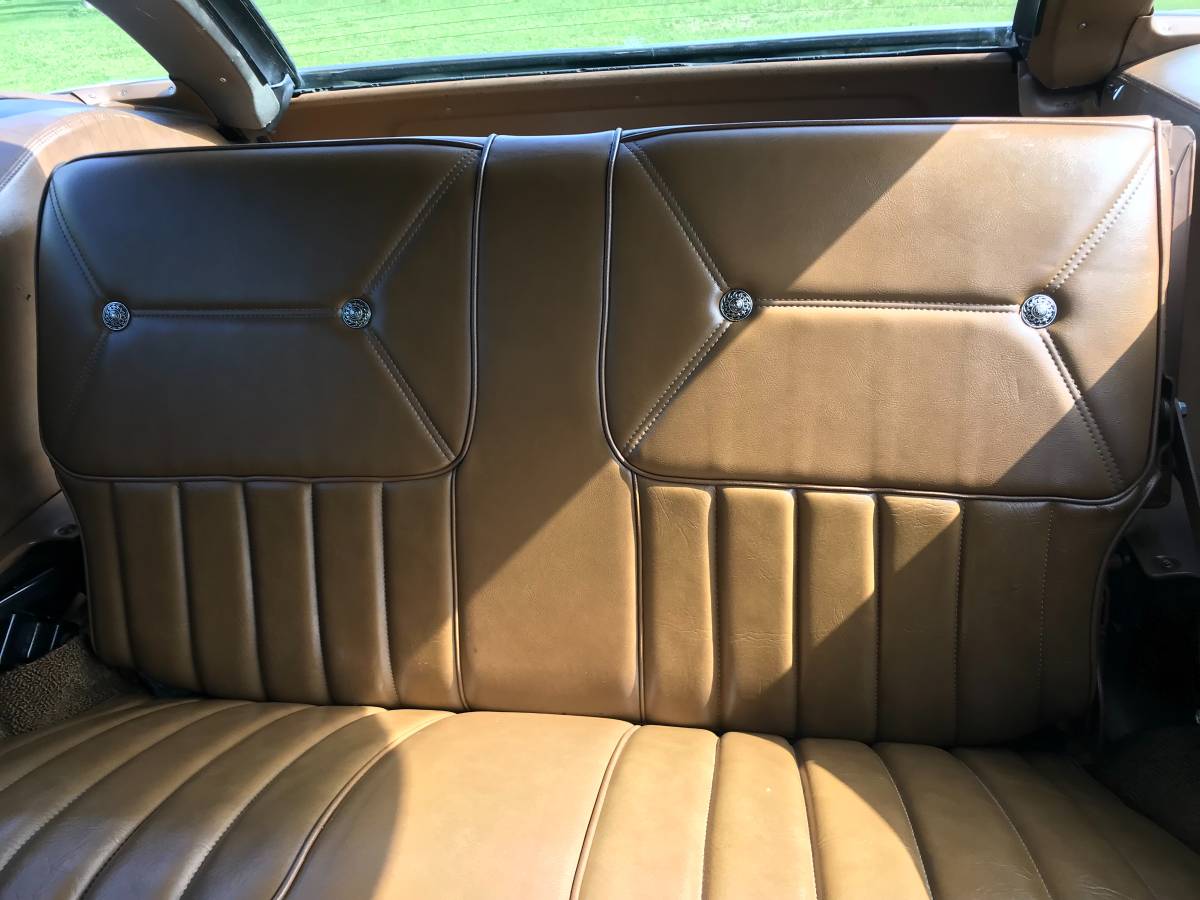 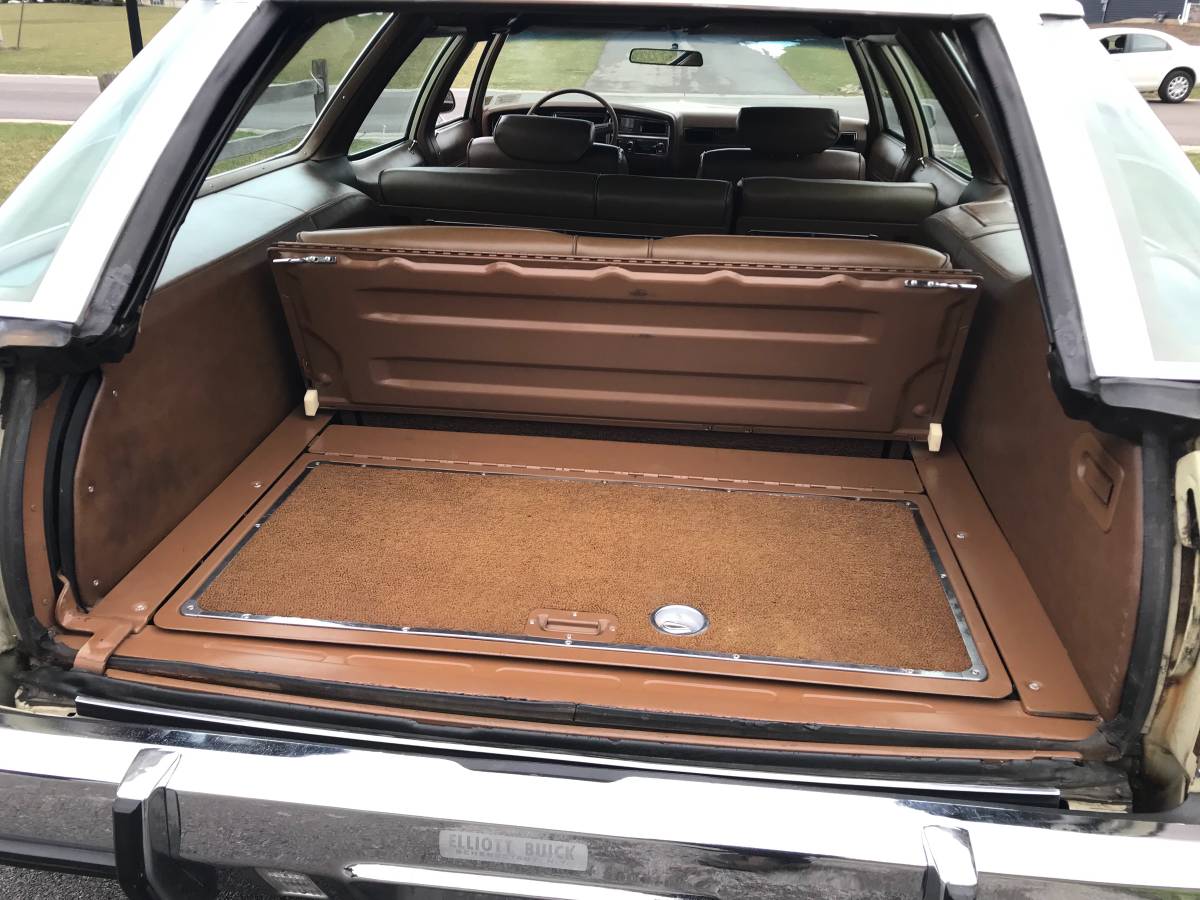 January 10, 2023, Update – We confirmed the listing for this “Classifind” expired, so with no replacement found, we’re assuming this ride is “Sold?” While this one got away, please reach out either by email or call us directly if you’d like to be informed when we come across something similar.

Buick Estate station wagons built between 1971 and 1976 are among the biggest and heaviest cars ever built by General Motors’ upscale division.  Essentially a wagon version of the brand’s top-of-the-line Electra 225, Buick Estates are typically very luxurious cars that have the ability to haul nine people with three rows of forward-facing seats.  Hard to come by in modern times, these Malaise Era wagons are increasingly in demand as the innovative Glide-Away Tailgate, better known these days as the clamshell design, was yet another example of General Motors’ design leadership through the early 1970s.

This survivor-quality 1972 Buick Estate wagon, once listed in December 20222 in Orchard Park, New York (Buffalo), was a treat to come across as the seller is a locally well-known mechanic for sourcing great cars and sorting them properly before finding a new caretaker for them.

Once offered for $23,500, Classic.com, the analytics and search engine for the collector car market, confirms the ask is well above the five-year rolling average of this guide’s summary for all Buick wagons produced between 1964 and 1972. In this instance, Classic elected to pool full-size Electra Estates with mid-size Buick Sport Wagons.  By clicking on the green dots in the graph below, you can navigate to each comparable car sold as a way to help you evaluate the price of the Estate featured here:

A better data point, in this case, comes from the  Collector Car Market Review Online Tool reveals the seller’s ask falls between this guide’s #2 Very Good” estimate of $19,000 and its #1 “Excellent” appraisal of $28,400.

Buick offered the “Estate” nameplate on its luxury full-size station wagon from 1940 through 1964 and then from 1970 through 1996.  Buick marketers derived Estate nameplate was derived from the term country estate in wealthy suburban areas and estate car, the British term for a station wagon.

For its entire model life, the Buick Estate was produced using General Motors (“GM”) B Body platform as the station wagon counterpart of Buick sedans, while briefly being offered on the GM C platform from 1949–1953, then again from 1971–1976. Except for the prewar Buick Limited limousine, the Estate was the largest vehicle of the Buick line, combining the luxury features of Buick sedans with cargo-carrying capabilities

The 1971 to 1976 Estates were the first Buick station wagons built on GM’s longest chassis since the Roadmaster Estates of 1947–53. The Estate shared its 127.0-inch C-body wheelbase with the Electra 225, while all 1971–76 GM wagons were B-body-based per model numbers.  The 1971–76 GM full-size bodies, at 64.3-inch  front shoulder room and 63.4-inch rear shoulder room, set a record for interior width that would not be matched by any car until the full-size GM rear-wheel drive models of the early to mid-1990s. The Estate also shared the Electra 225’s interior and exterior styling from 1971 to 1974 (complete with the prerequisite four VentiPorts on the hood). Door trim and seats were not as plush in 1971–74 wagons, and no door pull strap was included as it was on the Electra.

The Estate Wagons, as with other GM full-sized wagons during these years, used a rear suspension with multi-leaf springs instead of the coil springs used on other full-sized Buicks and other full-sized GM cars to better cope with load-carrying duties.

The Estate Wagons also featured a new ‘clamshell’ tailgate design, marketed as the Glide-away Tailgate, where the rear power-operated glass slid up into the roof as the lower tailgate (manually or with power assist), slid into a recess under the cargo floor. Ultimately, the manual lower tailgate was supplanted by the power tailgate. Switches operated the tailgate system on the instrument panel or a key switch on the rear quarter panel. Like a top-hinged tailgate, the clamshell design allowed a user to stand directly in the open cargo area without impediment, facilitating loading and unloading in tight spaces. The rear seat could be folded flat for additional cargo and incorporated a 60/40 split to accommodate extended cargo and passengers, providing entry to the third-row seat. The cargo capacity with the second-row seats folded was 184 cubic feet. If passengers were seated in the optional forward-facing third-row seat, the rear window could be retracted into the roof while the vehicle was in motion with the tailgate in place.

The Estate used the Buick 455 V8 from 1971 through 1976 found in the Buick GSX. The Stage One high-performance version, with a high lift camshaft, enlarged ports, enlarged valves, and dual exhaust, was available as an option through 1974.

The Hairy Clamshell YouTube Channel features this video showing the operation of the clamshell window and tailgate on a similar 1972 Buick Estate wagon:

As mentioned earlier, the person selling this car is a well-respected mechanic in the Western New York area who dabbles in classic cars.  As you read through his description of this 1972 Buick Estate he has for sale, you can tell he has gone through this survivor car methodically to ensure every system continues to work as it left the factory.

“1972 Buick Estate Wagon
The car had one family ownership from new till I bought it last year.  The original owner bought a new Buick every 2 years and traded in his old Buick.  The original owner loved this estate wagon so much he did not trade it in when he bought a new 1974 Buick, rather he kept this 1972 Buick estate wagon as his travel and vacation car.
About 2000 he stopped driving as much, but continued to start the car frequently and kept it clean inside his garage   About 2015 the original owner passed away. His son, who was about 60 at the time, inherited the Estate Wagon. He kept the Car stored inside and clean but didn’t use the car.
I bought the car a little over a year ago and replaced the gas tank, there were no leaks but I thought there might be contamination, and an exact reproduction tank was available.  I changed the oil, coolant, points, condenser, spark plugs, and fuel filter. Just before the original owner began to use the car much less, he replaced the front brake pads, and rotors and calipers. He also replaced the rear brake shoes and wheel cylinders.
I replaced the A/C condenser, it had a small leak, again a reproduction was available. I replaced both the front and rear radio speakers, and the radio works well   Last, the tires were perfect, no cracks and only a few miles of wear,— but they were old. So I have put 4 brand new radial tires on all 4 wheels. It rides beautiful.
As with all old cars it is sold as is where is.
Worldwide shipping can be arranged at buyers expense.
Thanks again,
Terry“

Show or go: What would you do with this survivor-quality 1972 Buick Estate Wagon?  Please comment below and let us know!