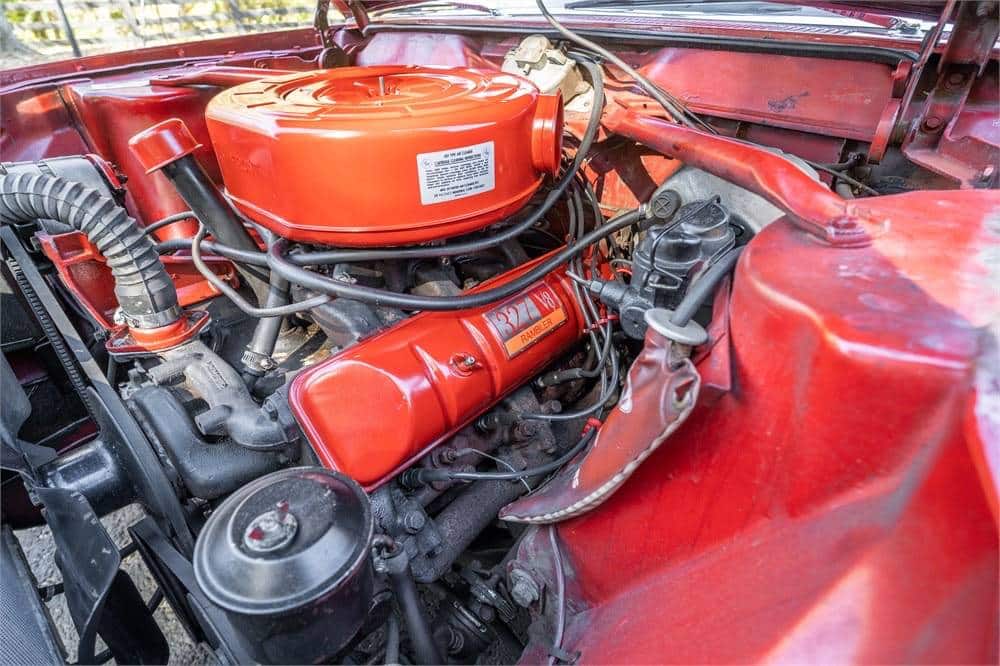 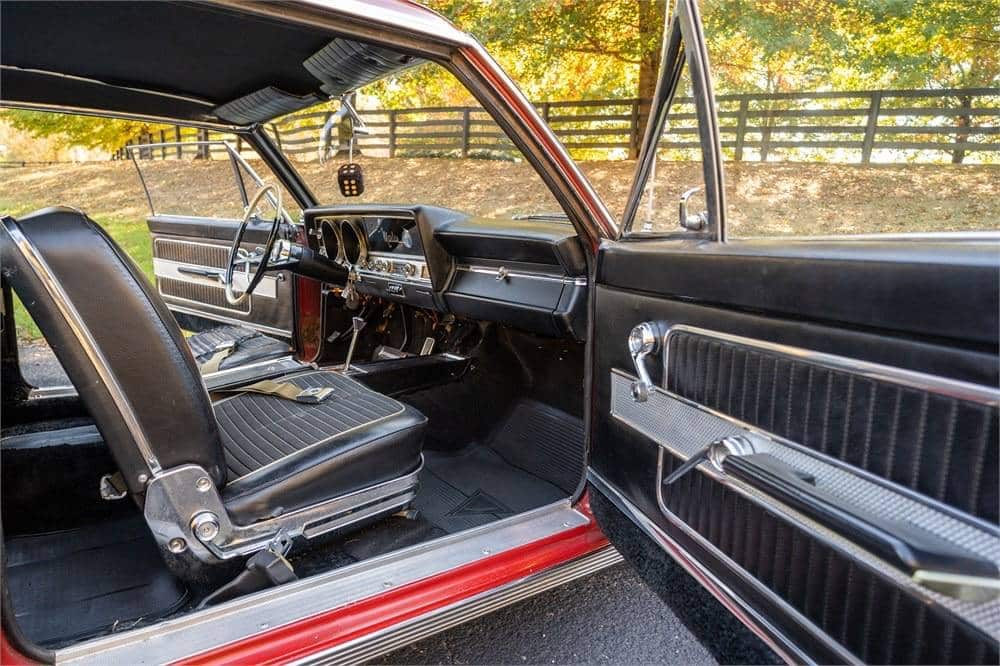 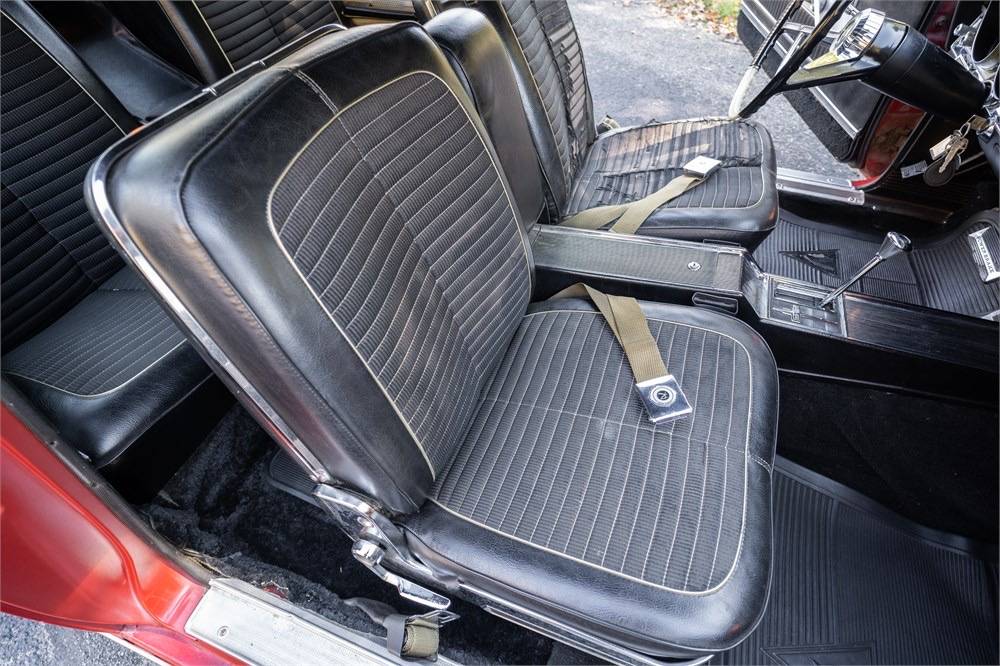 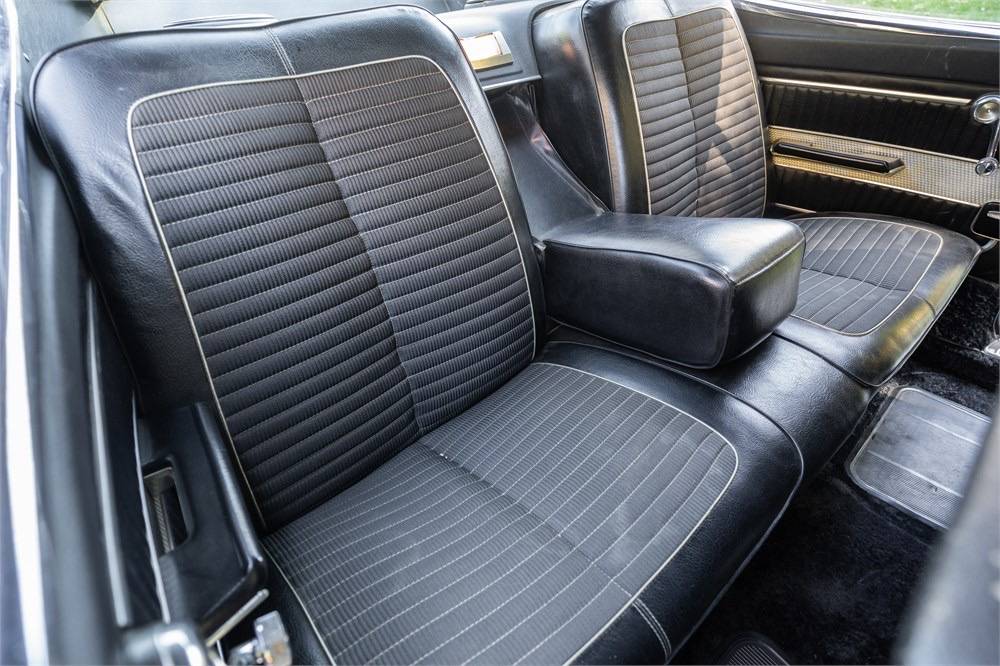 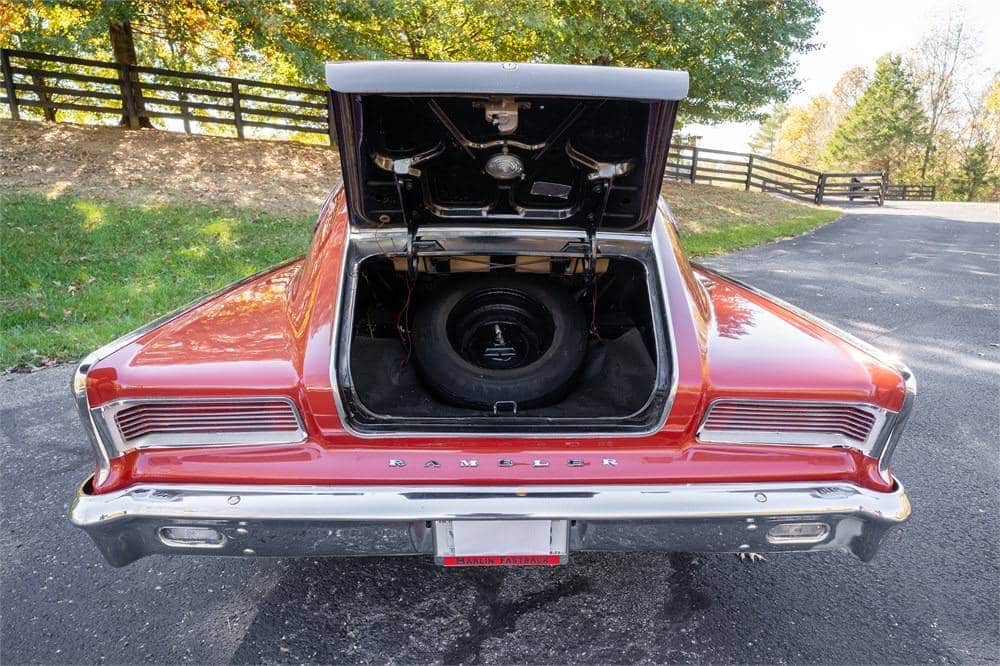 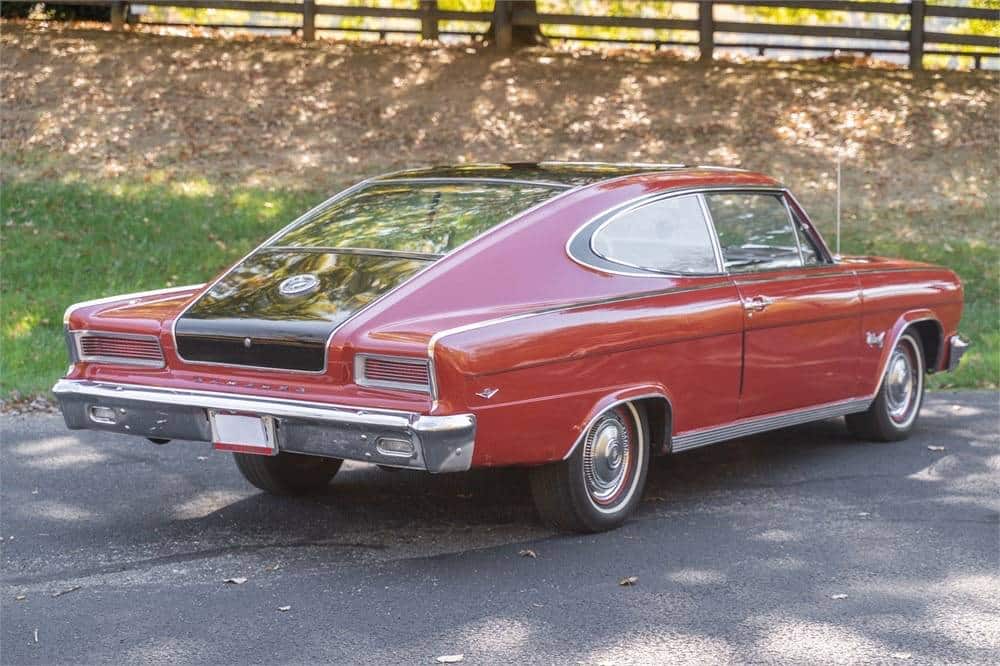 January 20, 2023, Update – We confirmed the listing for this “Classifind” expired, so with no replacement found, we’re assuming this ride is “Sold?” While this one got away, please reach out either by email or call us directly if you’d like to be informed when we come across something similar.

While Plymouth’s Barracuda introduced the concept of a fastback roofline using a huge glass backlight, American Motor’s Marlin set the stage in 1965 for the roofline relying on a more traditional flat rear window. Despite being one year early to market before the Big Three’s fastbacks came along and backed by an extensive marketing campaign, AMC’s Halo Car Marlin never really took off sales-wise. Consequently, sighting one today is a rare treat.

One example is this red-over-black 1965 AMC Marlin we spotted for sale in December 2022 on Craigslist in West Knoxville, Tennesee.  The seller reports their Marlin is original save for a replacement radiator and the repaint in the factory colors.  Even better is the fact this Marlin features the desirable 327 cubic inch V8 sending power through a  three-speed shiftable automatic made by Borg Warner.

Last offered for $17,000, Classic.com, the analytics and search engine for the collector car market, confirms the ask is slightly is in line with the five-year rolling average of this guide’s summary for all Marlins produced between 1965 and 1967.  By clicking on the green dots in the graph below, you can navigate to each comparable car sold as a way to help you evaluate the price of the Marlin featured here:

As a second data point, the  Collector Car Market Review Online Tool reveals the seller’s ask falls between this guide’s #2 Very Good” estimate of $12,575 and its #1 “Excellent” appraisal of $22,150 before making adjustments for the power train and other options.

American Motors Corporation (“AMC”) produced the Rambler Marlin two-door fastback from 1965 to 1967.  Considered a halo car for the company, AMC marketed the Marlin as a personal luxury car.  In 1965, AMC marketed the car as the “Rambler Marlin.” For 1966, the car featured “Marlin” identification only and was officially named “AMC Marlin,” as was the 1967 model.

AMC’s 1964 Rambler Tarpon show car previewed the fastback roof design on the production Marlin.  The 1965 and 1966 model year production Marlins were fastback versions of the mid-sized two-door hardtop Rambler Classic.  1967 brought a major redesign in which the car was given the new, longer AMC Ambassador full-sized chassis. This version had a longer hood and numerous improvements, including more interior room and new V8 engines.

Initially, in response to a proposal for a sporty, youth-oriented car, a four-seat fastback design study, the Rambler Tarpon, had been built on the compact-sized Rambler American platform.  This was shown as a concept car at various auto shows, but AMC’s current “GEN-I” V8 engine would not fit in the comparatively small Rambler chassis; also, the new “GEN-II” V8 designs were still in development, and market research showed that a six-cylinder engine alone would not satisfy potential customers. Management at the small automaker wanted to change “its tune” with “a reasonably sporty ‘upsized’ response of sorts to Ford’s Mustang.”  The “fastback” appearance was a revival of sedans built after World War II, as demonstrated by the 1940s Nash Ambassador.

Ultimately, and in line with Roy Abernethy’s new marketing strategy, the decision was made to build the new fastback model on AMC’s intermediate-sized Rambler Classic platform.  The development team, under distinguished American designer Dick Teague, had to work with considerably smaller budgets than their counterparts at Detroit’s Big Three to create the new Marlin. They created a large, roomy, and luxurious fastback that incorporated several design features from the Tarpon show car. The signature roof line from the windshield with the Marlin’s “skylight permits carrying through the true fastback line in an unbroken sweep.”  However, the roof was raised over the rear passenger area when Abernethy, who was six-foot-four, insisted on being able to sit in the back seat of the design studies.

American Motors billed the Marlin as a new addition to the company’s self-styled “Sensible Spectaculars” model line. Backed by extensive advertising and merchandising, the car was officially announced on 10 February 1965 and unveiled in Rambler dealer showrooms in March of that year.

More significant in the 1960s than today, new car introductions were often accompanied by special invitations and heavy publicity. AMC advertised the Marlin in 2,400 newspapers on its launch day, and American Motors’ news releases positioned it as aimed at buyers wanting a sporty fastback that was also roomy and comfortable. This contrasted it with the smaller Barracuda and Mustang fastbacks that had arrived a year earlier. AMC’s first model following the muscle car launches of the 1960s, the Marlin, was intended to fill a niche left by their competitors.  Within a year, Chrysler would enter that marketplace with the Dodge Charger, and a year later, Ford with the Mercury Cougar.

The initial Rambler Marlin advertisements stated, “now in limited production.” Every dealership received one or two units to increase showroom traffic, whereas the production numbers are a direct reflection of the actual number of Rambler automobile dealers, and AMC sent bulletins to dealerships telling “How to use Marlin to sell the Rambler Classic.” According to Tom Coupe, AMC’s vice president for sales, “the basic reason we produced the Marlin is to attract attention to American Motors.”

The Marlin followed the signature design features of the Ford Galaxie “Sports Roof,” the Plymouth Barracuda, the Mustang 2+2, and the 1965 fastback models from General Motors, including the Chevrolet Impala “Sport Coupe” versions.

Motor Trend magazine found the Marlin well-balanced and said it added to the market’s various personal performance sports cars. The San Francisco Chronicle praised it and noted effortless cruising at 80 mph.  Hot Rod magazine ran the quarter-mile in 17.43 seconds at 79 mph (127 km/h) with the 327 cu in (5.4 L) and “Flash-O-Matic” transmission.

The Marlin emphasized the stretched-out hardtop (pillar-less) roofline that followed the contemporary styling vogue.  Automobile Quarterly magazine thought the car very ugly and expressed dislike for the inadequacy of the rear-view window, the positions of the steering wheel and stoplights, the softness of the front seats, and the design of the pedals.

Despite Marlin’s redesign on the larger Ambassador chassis for the 1967 model year, sales of the redesigned Marlin fell to 2,545.  This was partly a result of customers’ diminishing confidence in the financial health of the automaker under Abernethy’s leadership, partly confusion caused by AMC’s move away from its loyal “economy” customer market segments into segments dominated by the domestic “Big Three” (GM, Ford, and Chrysler), and partially a reflection of cannibalism of its potential market by the successful introduction of the Javelin. Buyers did not turn to the “family”-sized fastback, including the Dodge Charger, which saw 1967 model sales drop by half compared to its prior 1966 introductory year. Both the AMC Marlin and the very similar-looking first-generation Dodge Charger failed in the market as sporty car buyers were showing their preference for compact pony cars. The Marlin ceased production at the end of the 1967 model year.

This 1965 AMC Rambler Marlin for sale appears to be a nicely optioned example repainted in its original factory two-tone hues.

“CALLS ONLY IF YOU ARE INTERESTED. NO TEXTS. 1965 AMC Rambler Marlin. Very rare! These were only made from 1965 to 1967, and only around 17,400 were built. Factory 2-tone colors, red and black. The car is original except for the radiator and the repaint of the factory colors. 327 V-8, with a 3-speed shiftable automatic made by Borg Warner. She is in very good shape. The interior is in great shape, except the driver’s seat has worn fabric. The dash and steering wheel are in great shape. Bucket seats, console, floor shifter, and arm rests. It runs and drives great and has a new 4-barrel carb and muffler. The grille, chrome bumpers, all chrome trim, and bright work are in great shape. Selling due to too many cars!

She attracts attention everywhere she goes!“

Show or go: What would you do with this 1965 AMC Marlin for sale?  Please comment below and let us know!