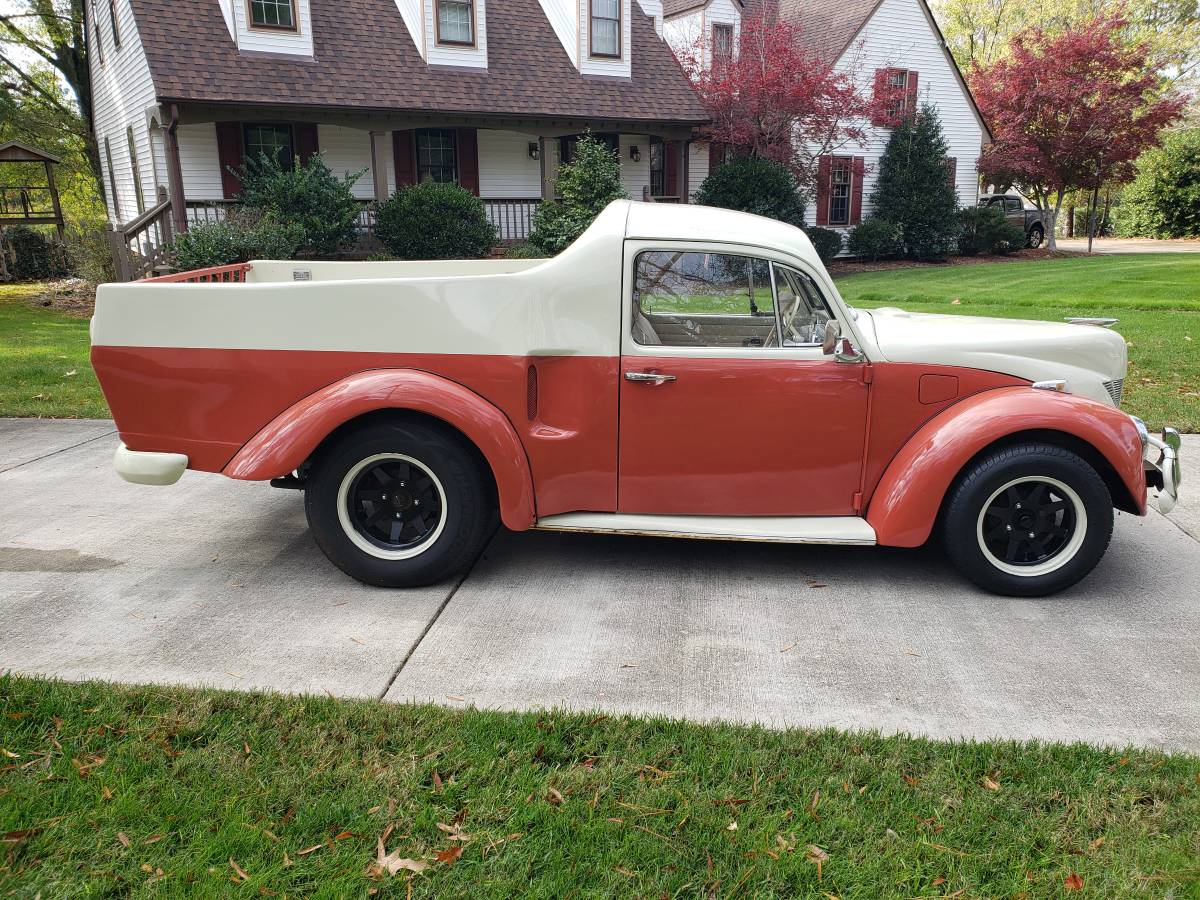 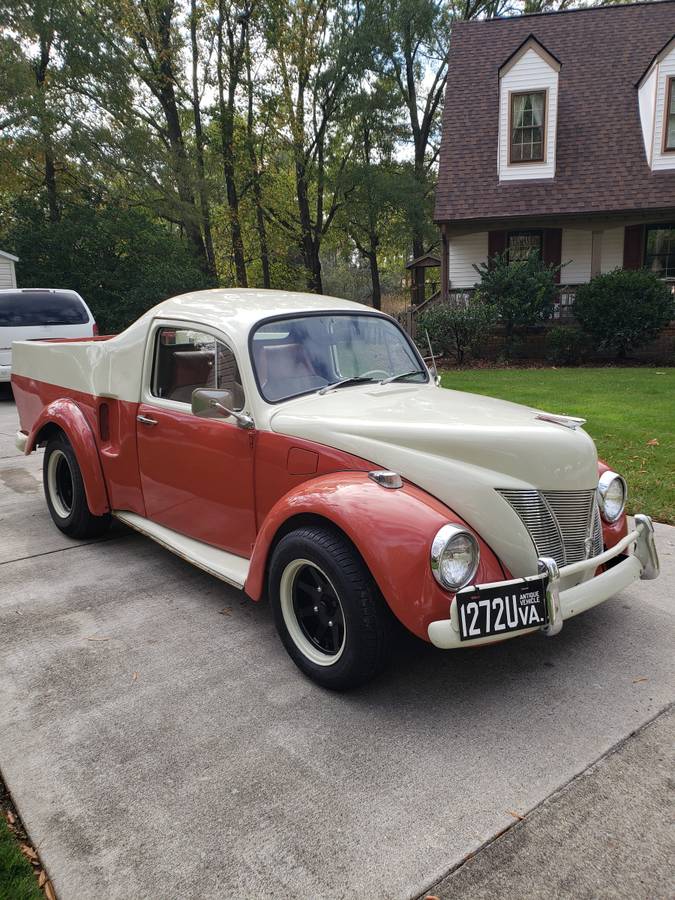 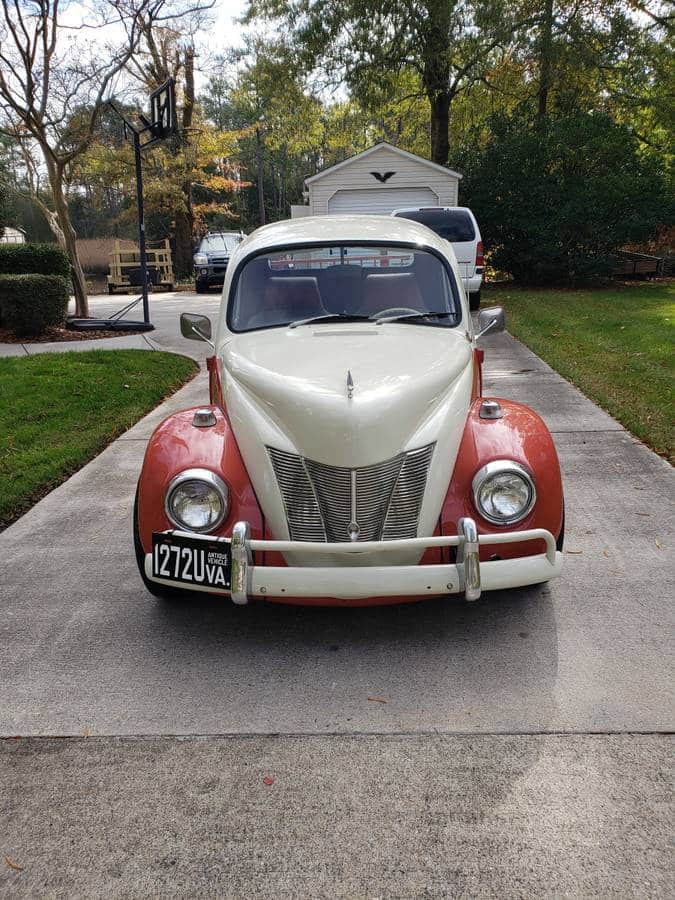 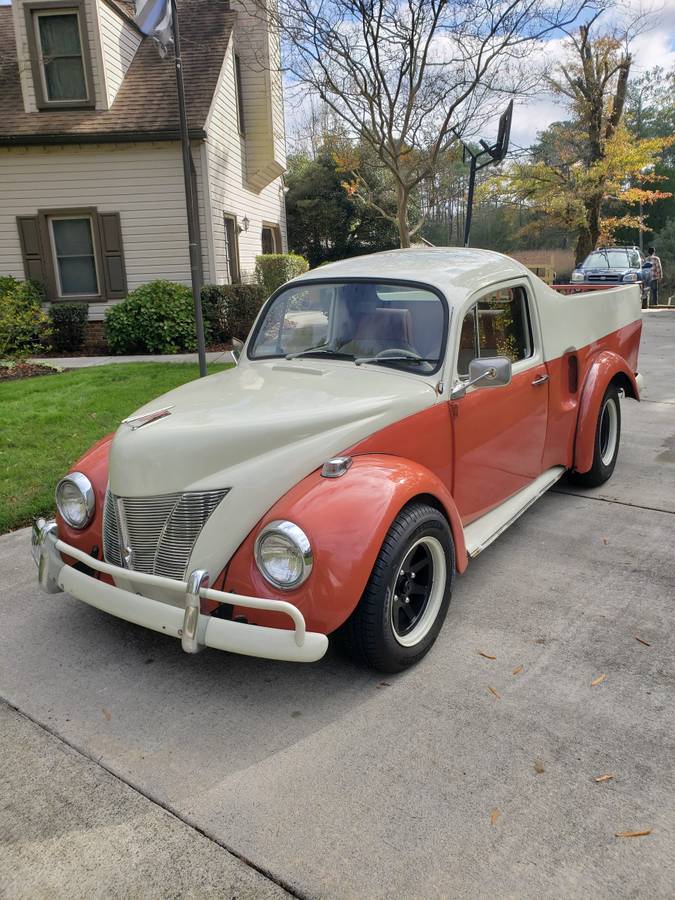 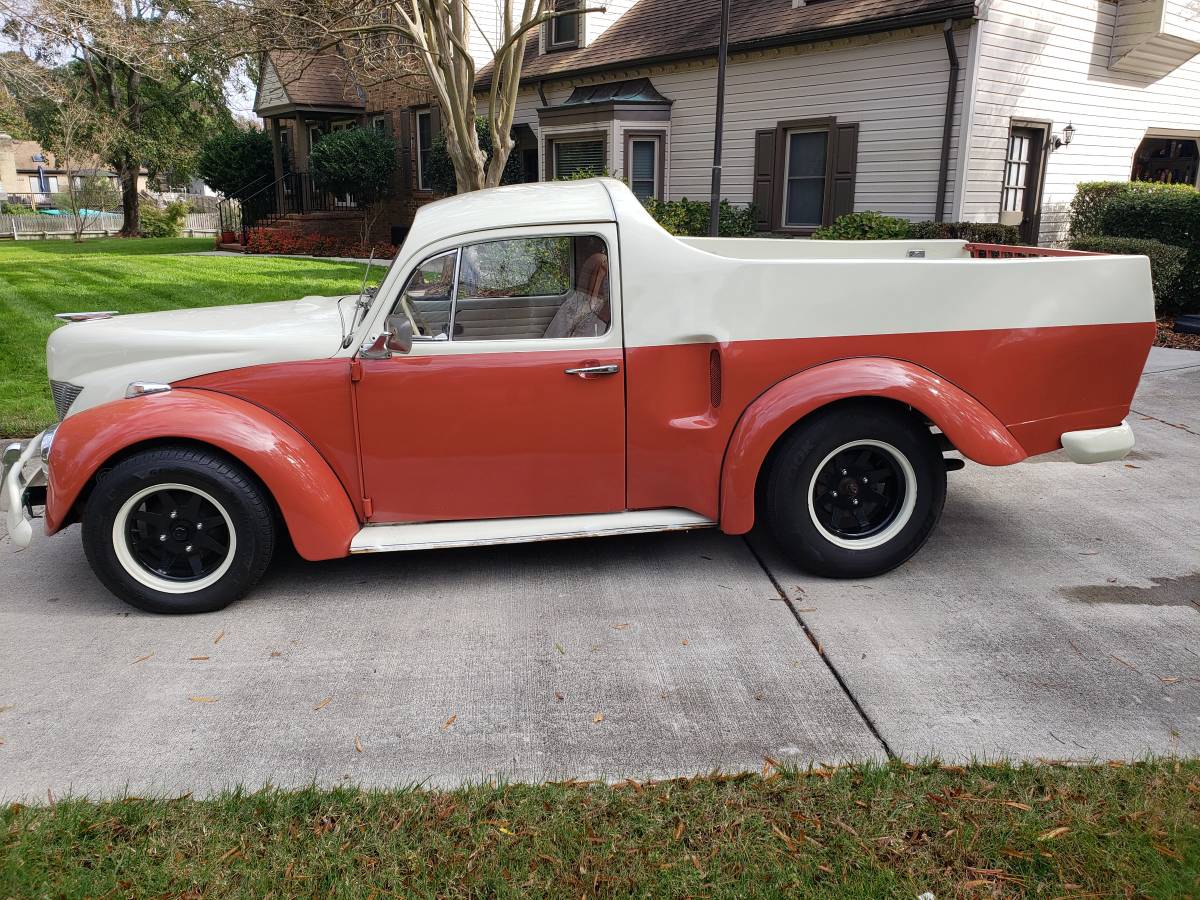 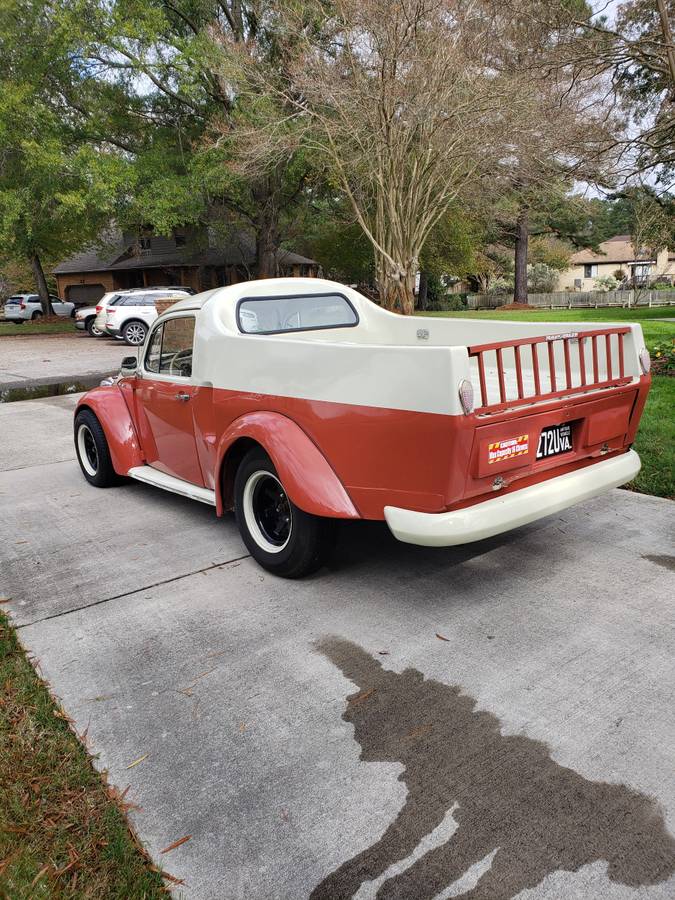 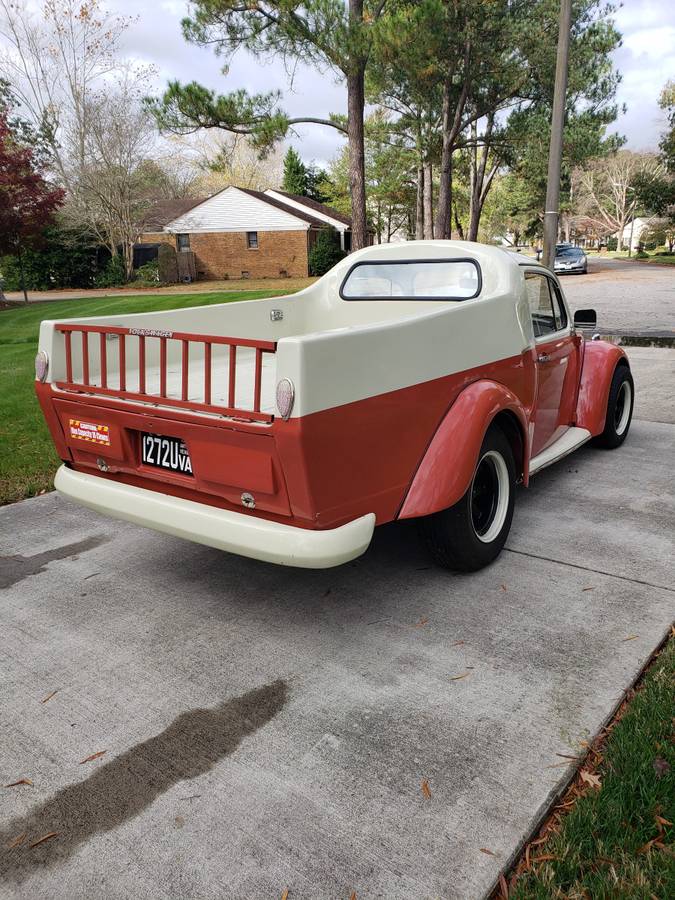 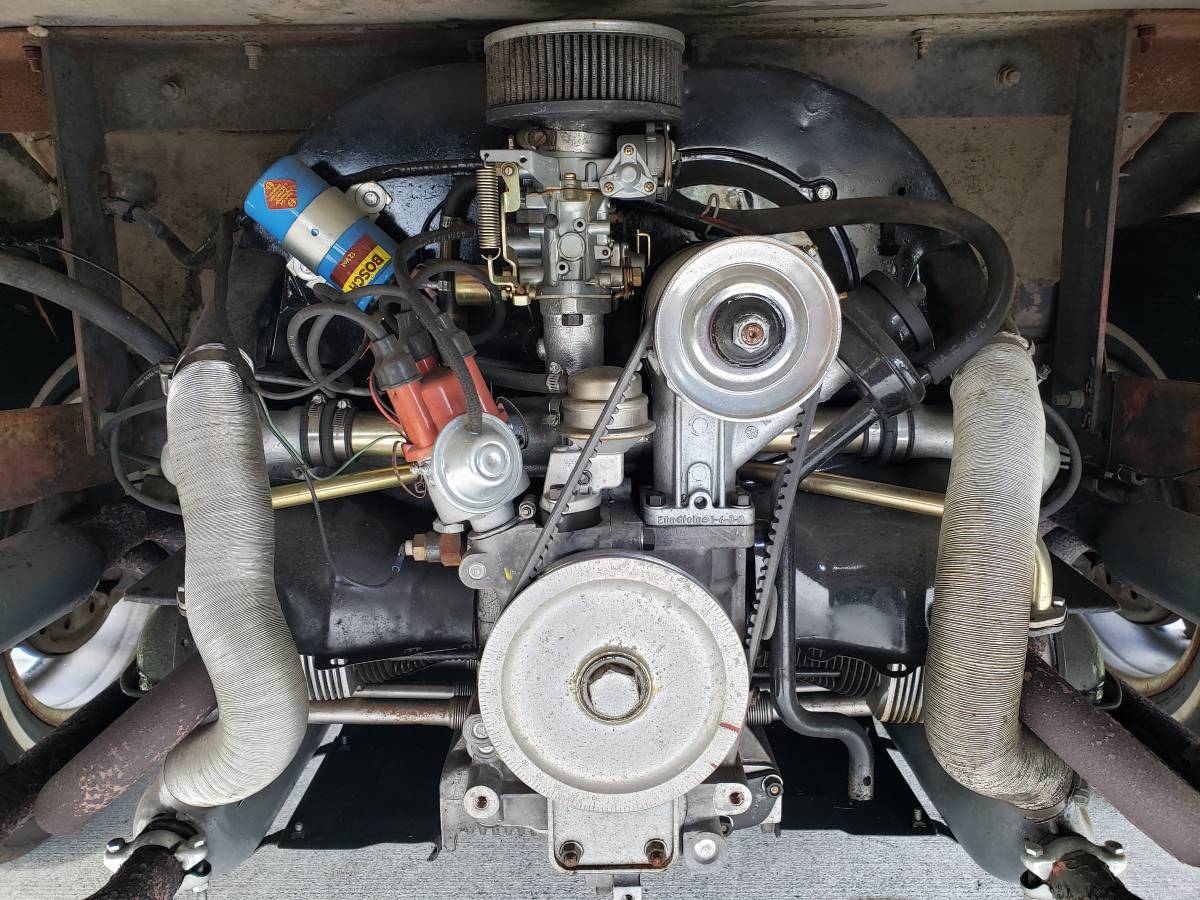 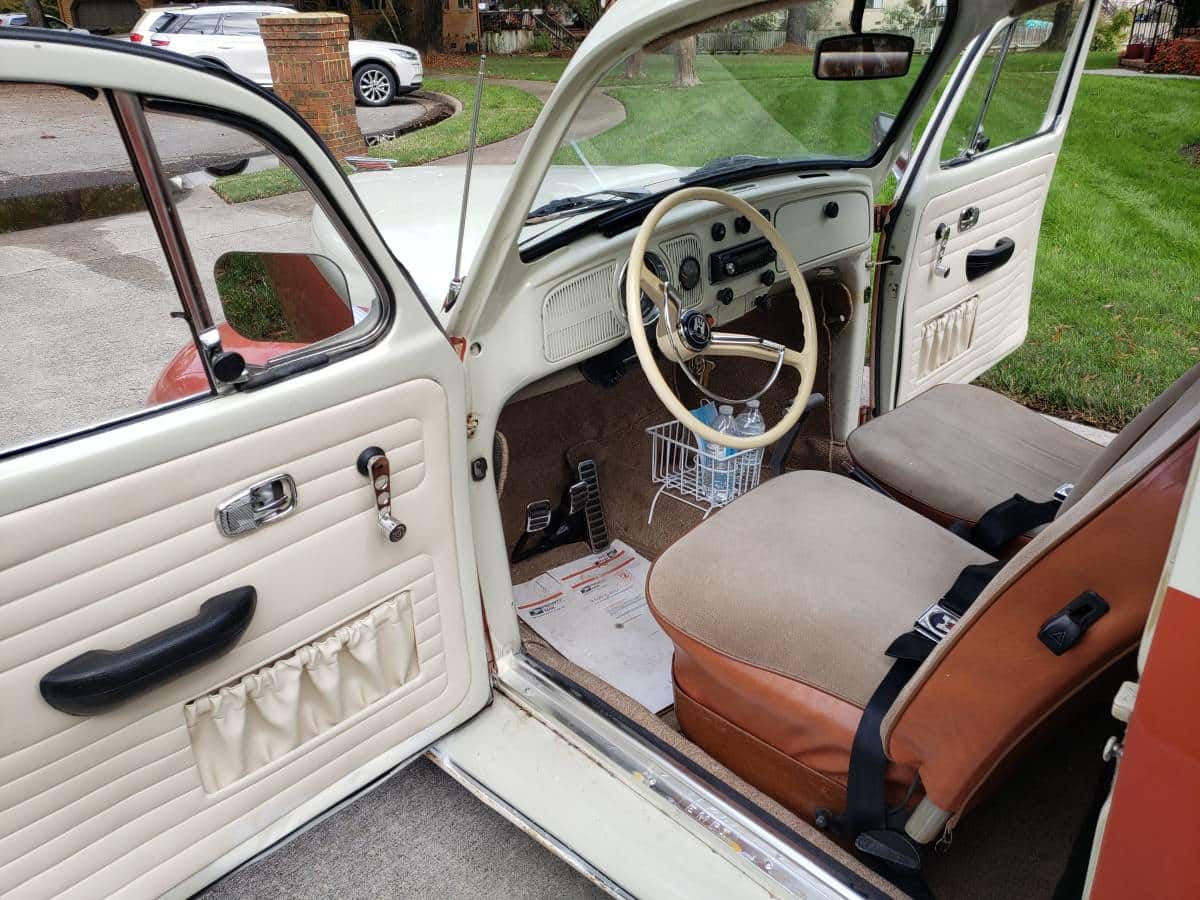 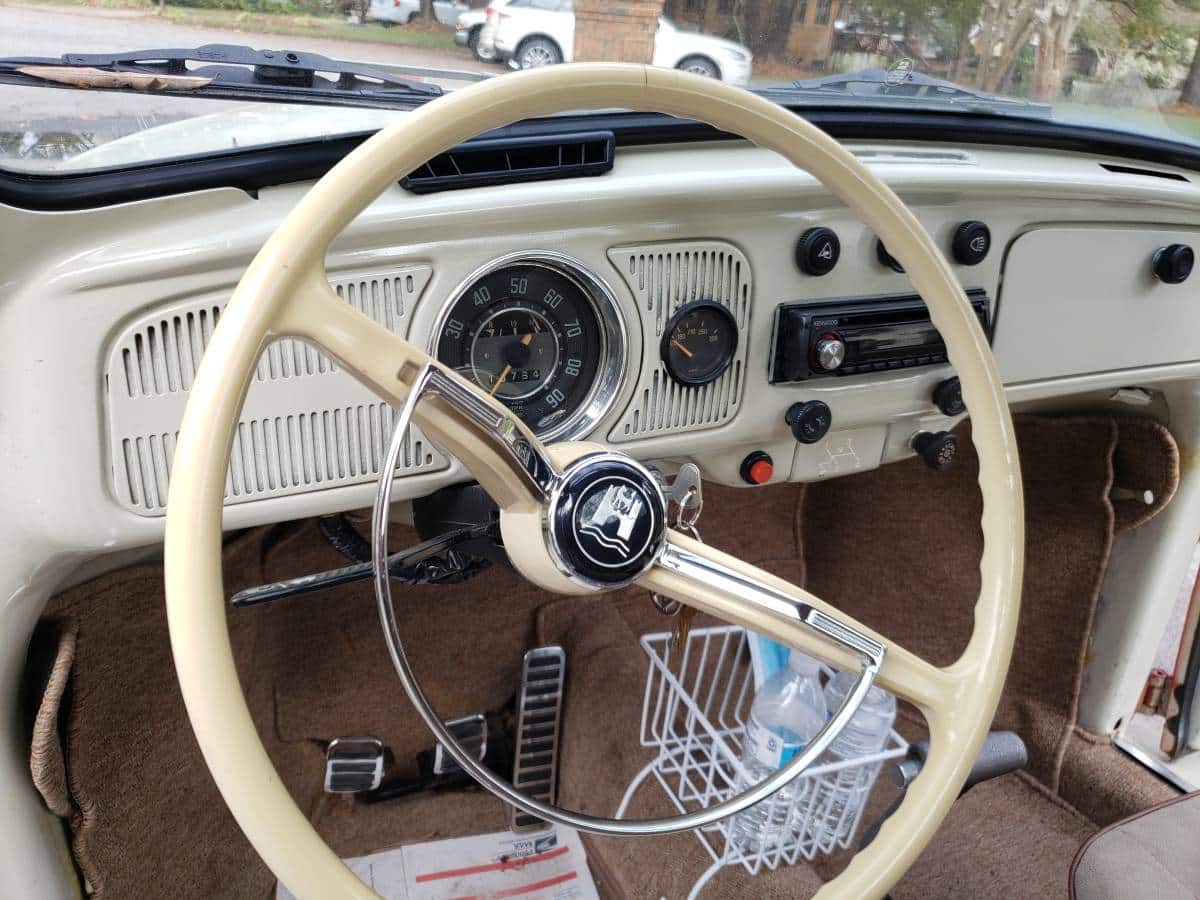 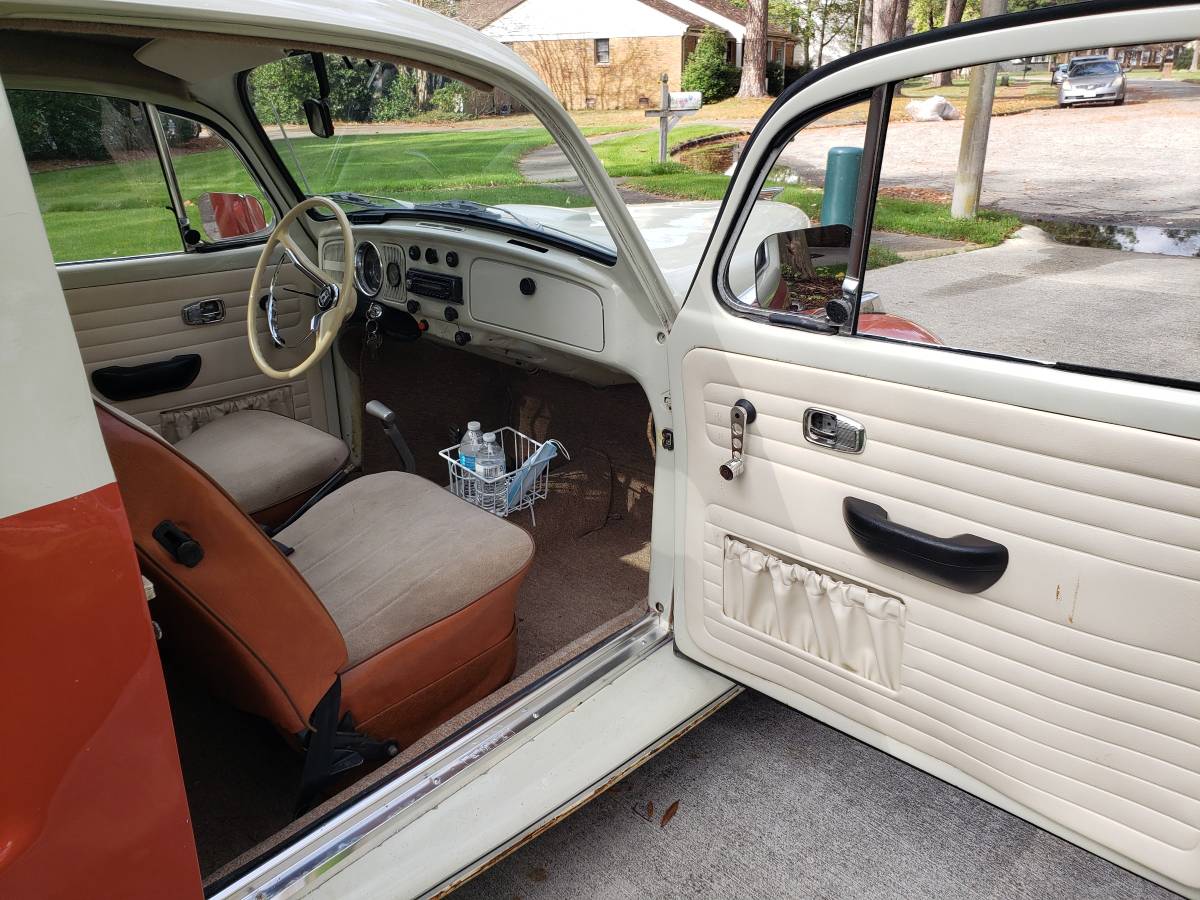 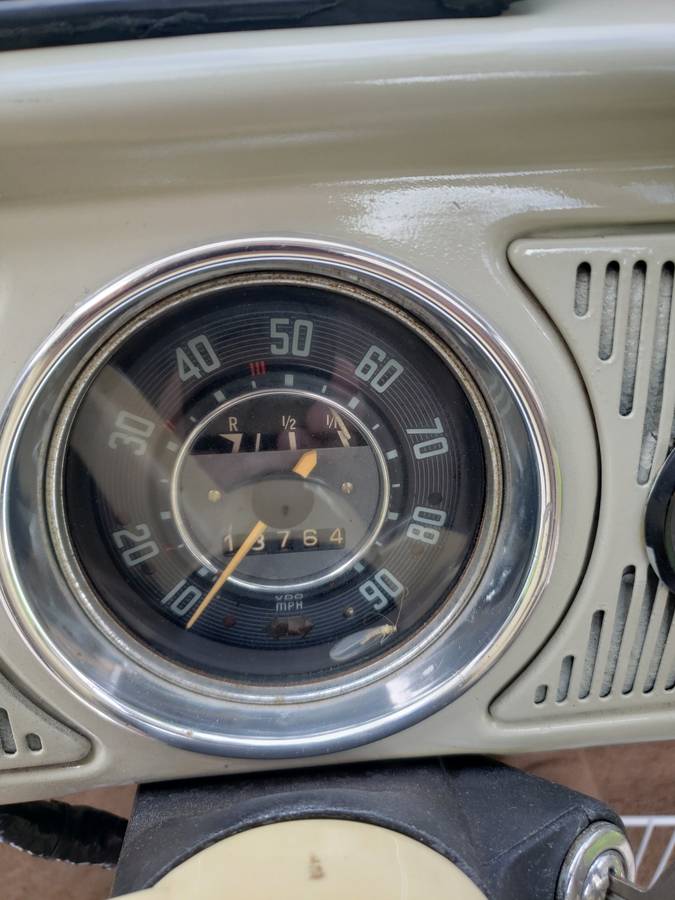 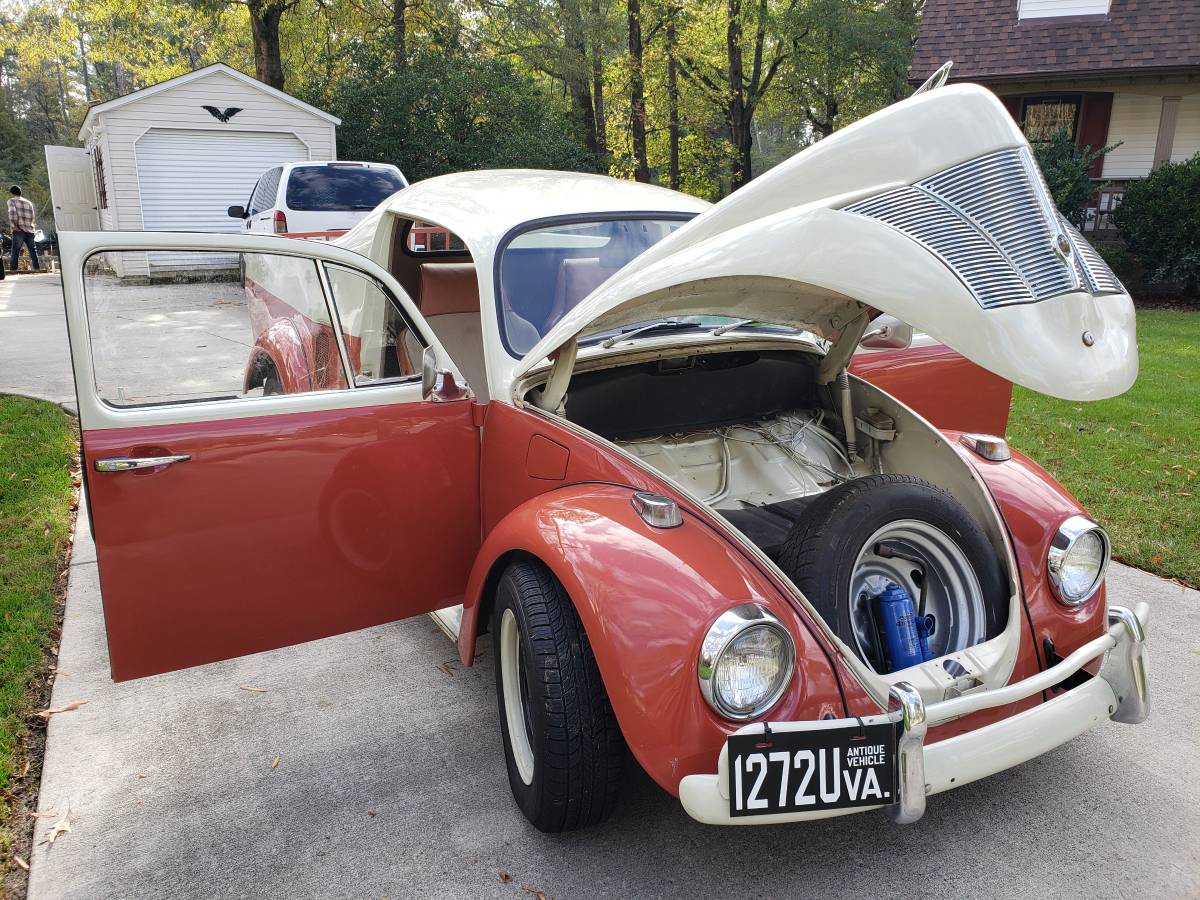 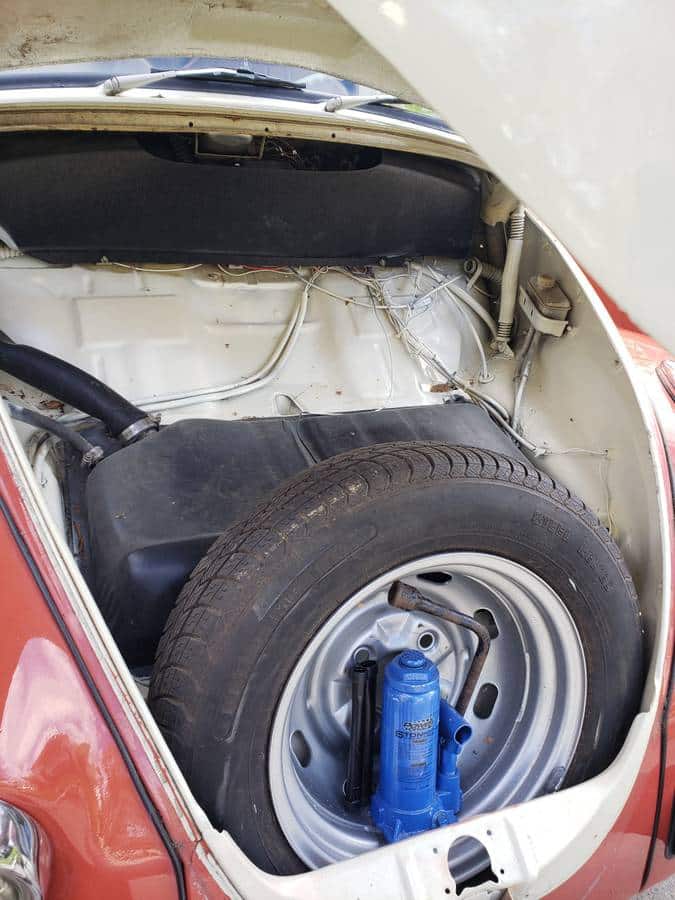 January 31, 2023, Update – We confirmed the listing for this “Classifind” expired, so with no replacement found, we’re assuming this ride is “Sold?” While this one got away, please reach out either by email or call us directly if you’d like to be informed when we come across something similar.

With its pan-floored frame, bolt-on body, air-cooled engine, and plentiful production numbers, the Type 1 Volkswagen Beetle became a favorite for customizers.  Not only did many Beetles become donor cars for various kit car designs, but many also received body modifications designed to make their car stand out and provide more practicality.

One such popular modification was converting the rears of Beetles to feature a pickup bed. Most of the custom Beetle pickups we’ve come across feature a utility-like flatbed with wooden stakes. However, this 1969 Volkswagen Beetle we spotted in January 2023 on Craigslist in Chesapeake, Virginia, features a streamlined fiberglass body kit designed to make the Beetle look more like a Ute, i.e., a car-based pickup truck. The seller does not mention the name of the body kit manufacturer but reports the car features a freshly rebuilt 1600 cc motor.

Last offered for $11,500, Classic.com, the analytics and search engine for the collector car market, confirms the ask is slightly below the one-year rolling average of this guide’s summary for all body styles of 1969 Type 1 Volkswagen Beetles.  By clicking on the green dots in the graph below, you can navigate to each comparable car sold as a way to help you evaluate the price of the truck featured here:

As a second data point, the  Collector Car Market Review Online Tool reveals the seller’s ask falls between this guide’s #2 Very Good” estimate of $9,800 and its #1 “Excellent” appraisal of $17,000.

Produced from 1938 through 2003 with over twenty-one million units produced worldwide, Volkswagen’s type I Beetle only saw incremental improvements over its lifespan as consumer tastes and government regulations evolved.  1968 was a year of major change for the Beetle.

The most noticeable of which was the new larger, higher-mounted C-section bumpers. At the rear, new larger taillamps were adopted and were able to accommodate reversing lamps, which were previously separate bumper-mounted units. Beetles worldwide received the ’67 North American style vertical headlamp placement, but with replaceable-bulb headlamps compliant with ECE regulations rather than the US-sealed beams. Other improvements were a new outside gas filler with a spring-loaded flap, eliminating the need to open the trunk to refuel. The fuel gauge was integrated with the speedometer and was now electrically actuated rather than cable-operated. The windscreen washer was now pressured by the spare tire, which was to be maintained at a pressure of 42 psi (2.9 bar). A pressure valve in the connecting hose closed airflow to the fluid reservoir if spare tire pressure fell below 30 psi (2.1 bar), which was above the recommended pressure for the road tires. Volkswagen also introduced a modern ventilation system, which drew fresh air into the cabin from louvers on the front decklid. For improved shifting, engineers shortened the Beetle’s shift lever was shortened, stiffened, and moved rearward by over three inches.

Also new for 1969 was a three-speed semi-automatic transmission with torque converter and vacuum-operated clutch that became available mid-production year. The semi-automatic models received a vastly improved semi-trailing-arm rear suspension (also known as “independent rear suspension” although the earlier swing axle Beetles were also independent) and eliminated the need for the equalizing torsion spring. This new rear suspension layout would eventually become an option on later models. Beetles equipped with the automatic were identified with a “VW Automatic” badge on the engine lid and a matching decal in the rear window. In North America, the badging and decal were later revised to read, “Automatic Stick Shift“.

For 1969, the only exterior change was the fuel filler flap no longer had a finger indentation due to a new interior-mounted fuel door release. For North America, the Beetle received a heated rear window, day/night mirror, and semi-trailing, independent suspension with double-jointed swing axles as standard equipment. In other markets, manual transmission models retained a swing axle independent suspension which would continue until the end of German Beetle production.

With its freshly rebuilt and sorted exterior, this 1969 Volkswagen Beetle pickup conversion for sale doesn’t appear to need much to get ready for the 2023 summer cruising season.

“1969 VW Bug with Truck conversion. New rebuilt 1600cc engine.
This is a fun car that attracts attention where ever it goes! It would be great to use to promote your business, or as a fun beach cruiser, or to cruise around town!
It started as a ’69 bug, but the back was replaced with a fiberglass truck bed conversion, and the front hood was replaced with a longer 1940s hood with a chrome grill and cool hood ornament.
The newly rebuilt 1600cc engine only has about 450 miles on it!
New tires, shocks, door panels, visors, window cranks, rear glass, pedal covers, spare tire, wheel & jack.
It starts & idles easily, Fun to drive!
I have over $17,500 in it but don’t have time to enjoy it & need to free up space in the driveway. My loss is your gain. Enjoy for many years! Very Cool!
Call or text me…“

Show or go: What would you do with this unique 1969 Volkswagen Beetle Ute?  Please comment below and let us know!