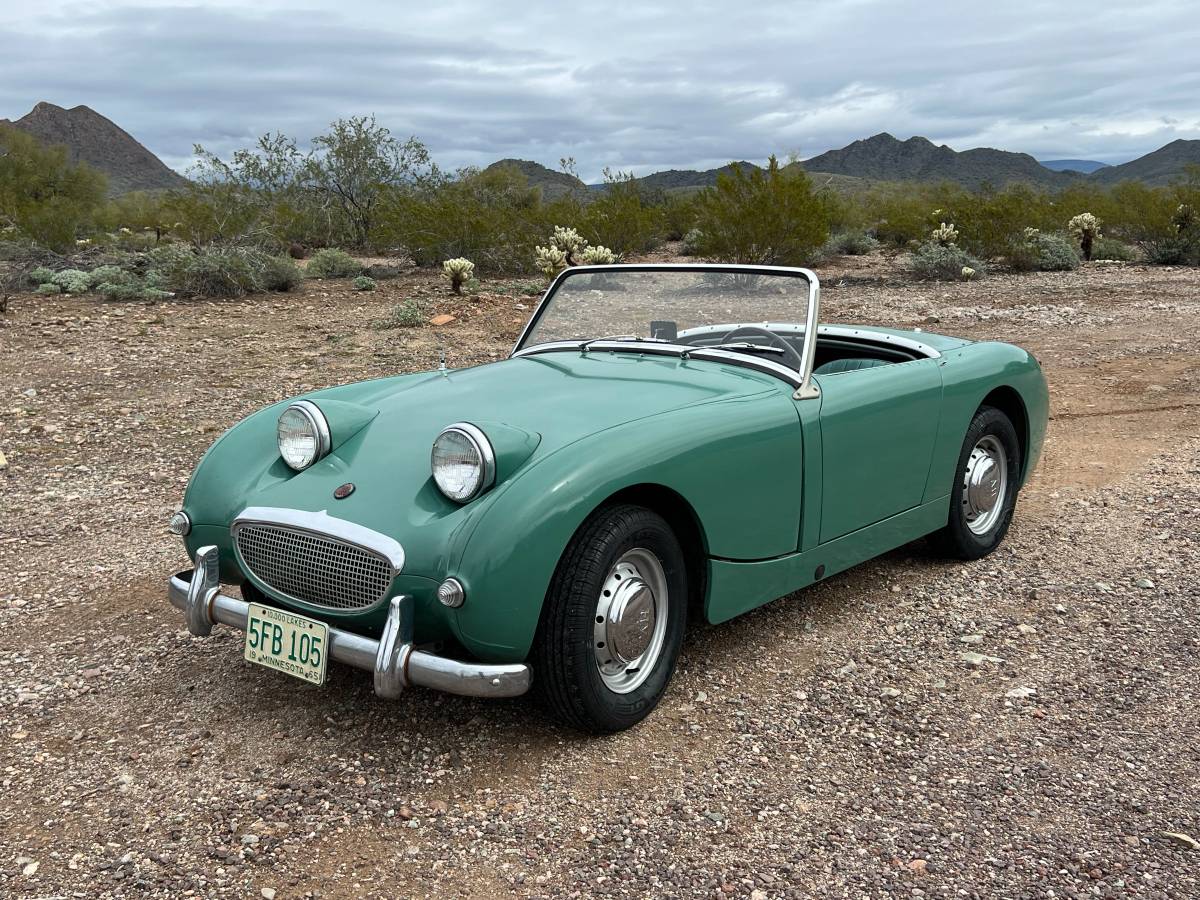 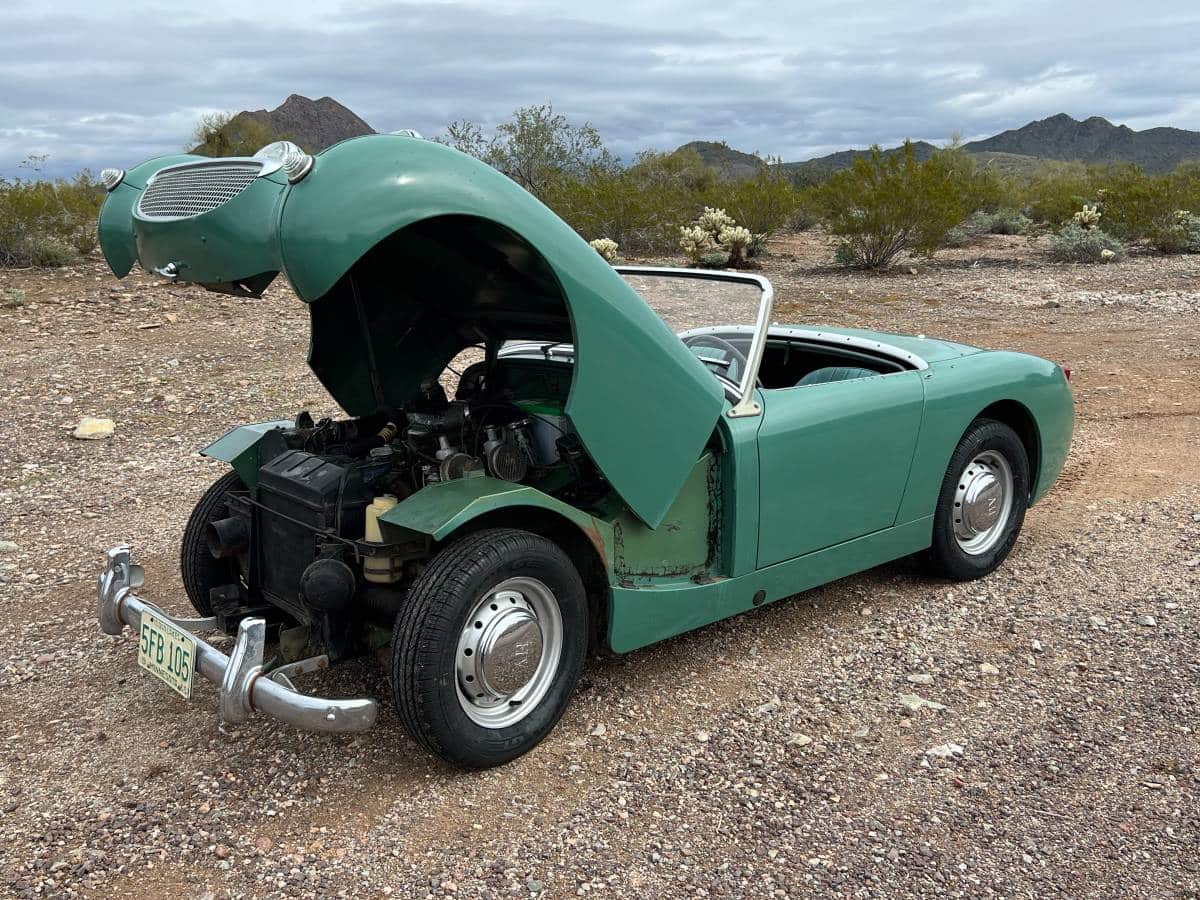 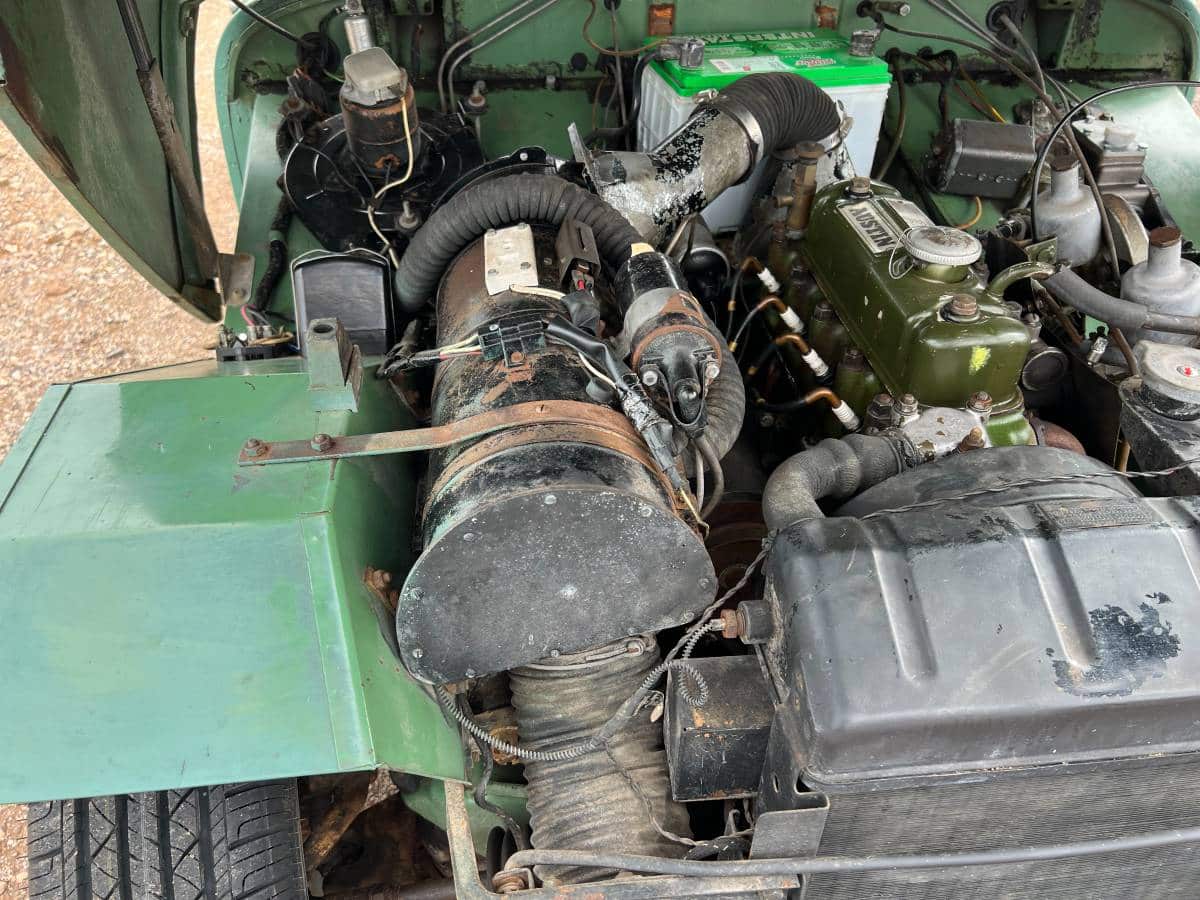 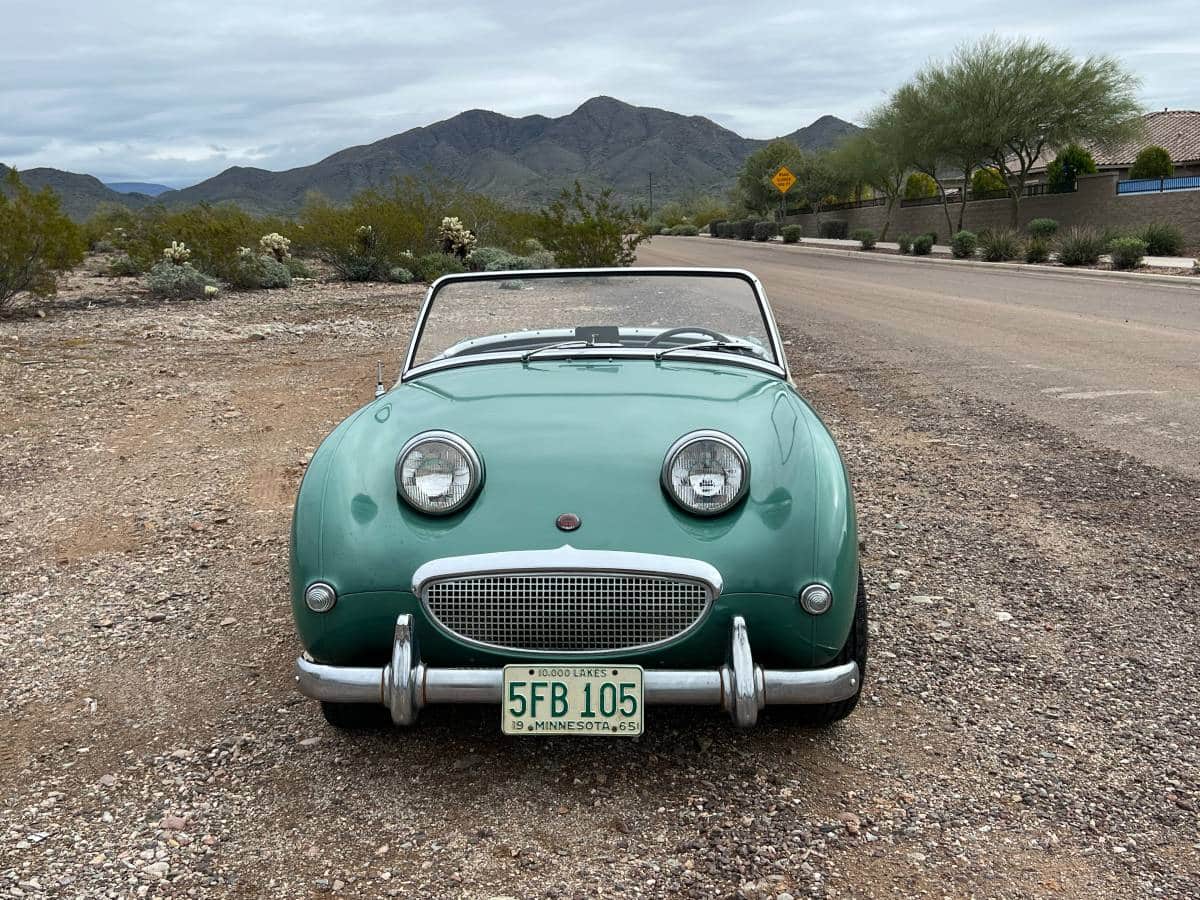 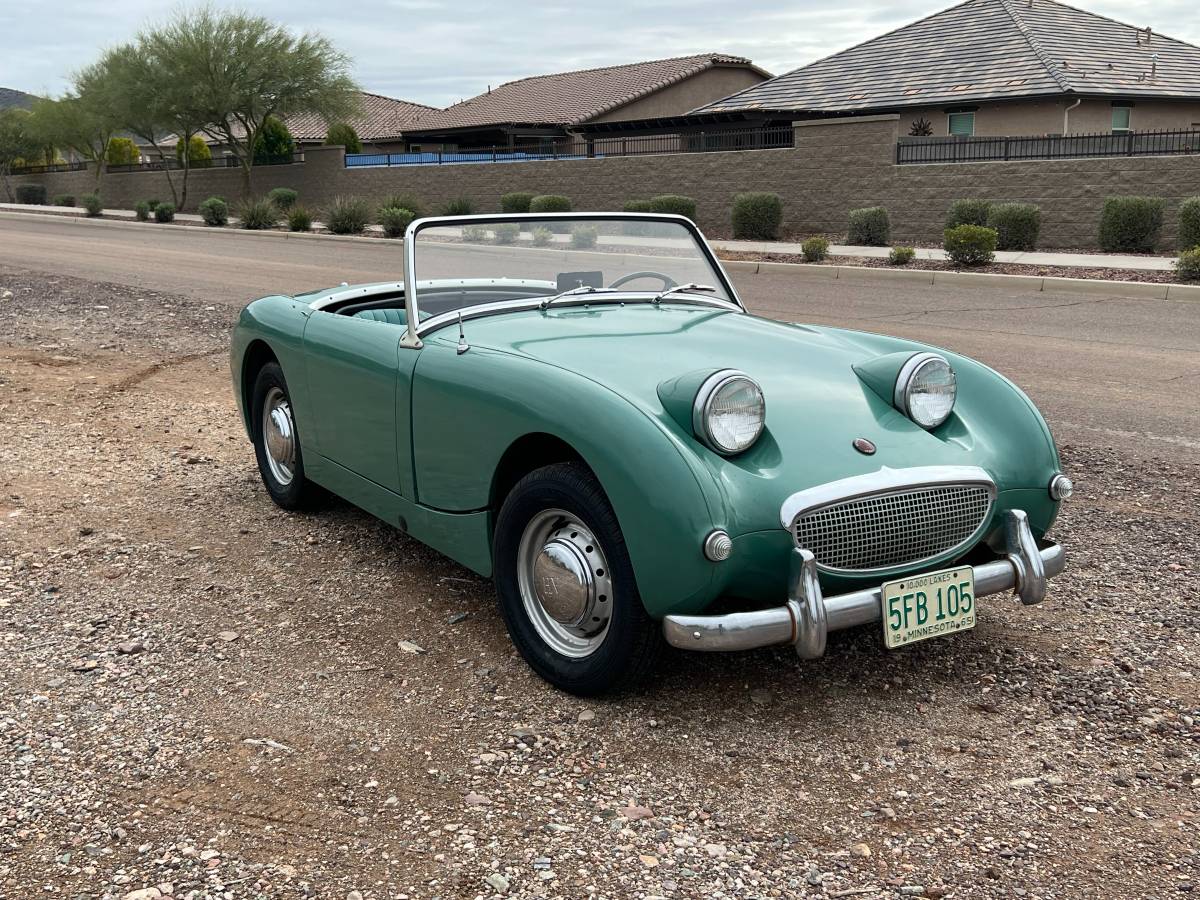 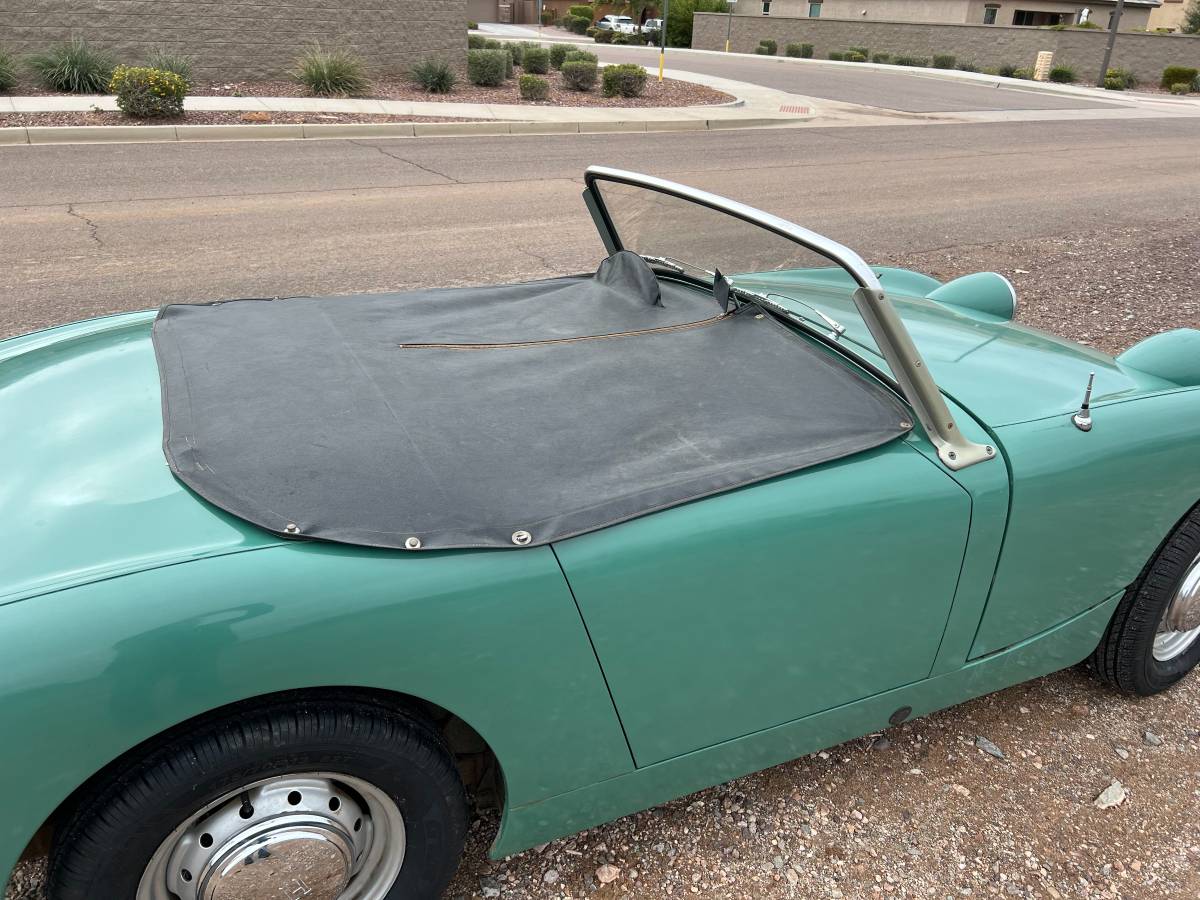 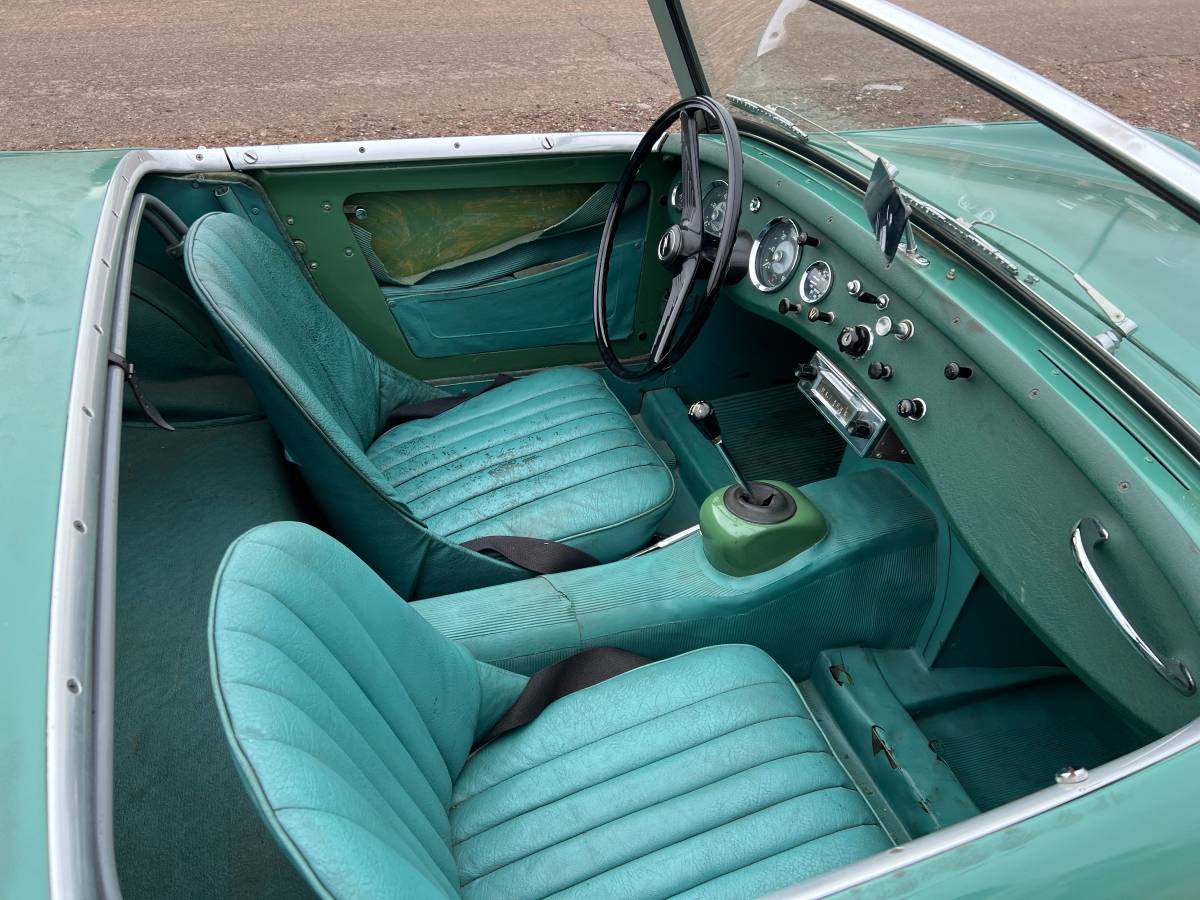 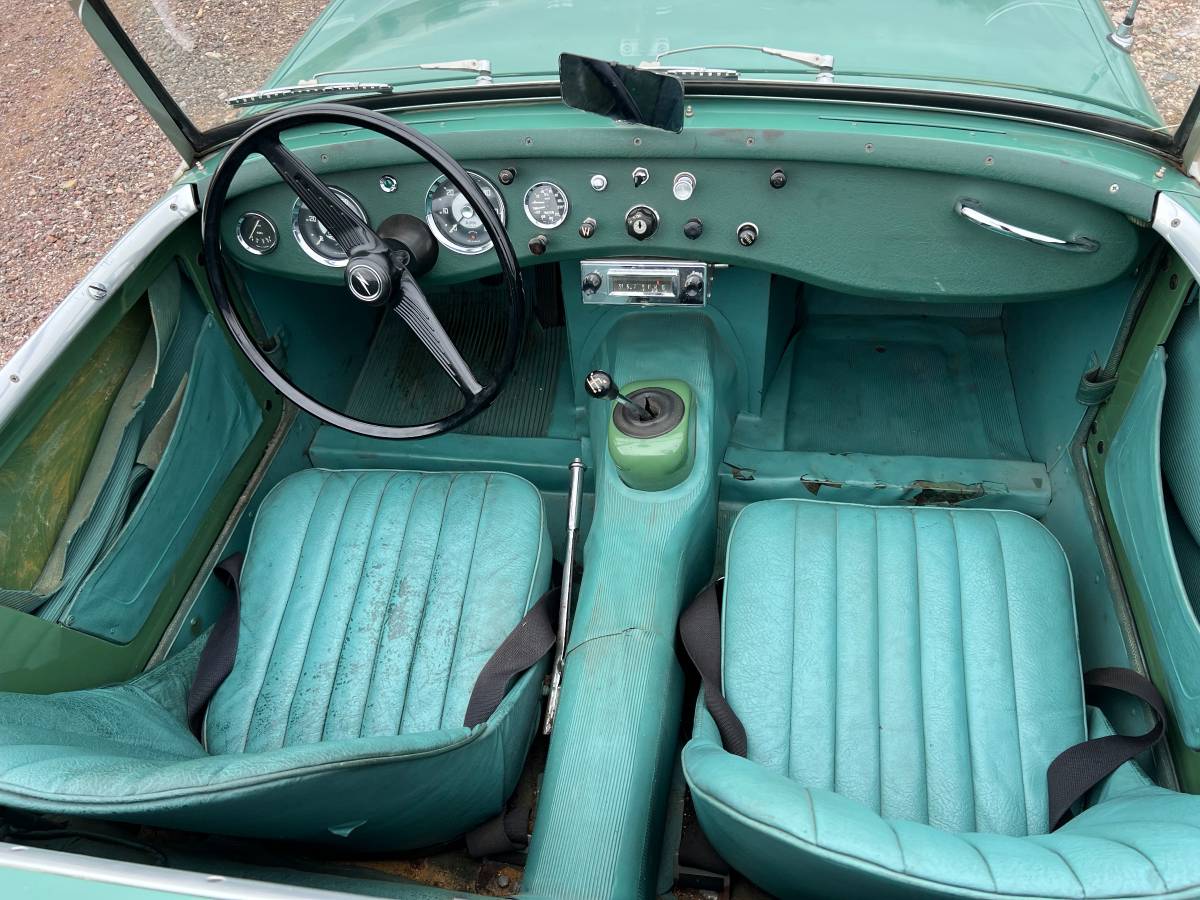 January 14, 2023, Update – We confirmed the seller of this “Classifind” deleted their listing, so we’re now able to call this one “SOLD!” While this one got away, please reach out either by email or call us directly if you’d like to be informed when we come across something similar.

Most classic car enthusiasts long to someday come across a barn find of a real collectible car, not some low-mileage four-door sedan meticulously preserved by its original owner. In many ways, having visions of scoring a Shelby tucked away many years ago would be like winning the lottery.

While far from being an extremely rare barn find, this all-green 1959 Austin Healey Sprite Mk1, originally listed in January 2023 on Craigslist in New River, Arizona, would be a great compromise to find tucked away and ready for getting back to being road worthy. The seller reports they recently purchased their green Bugeye from the second owner, who purchased the car in 1962 and drove it a few years before parking it for the next 57.  The current caretaker notes that a spare engine will be included in the sale.

Once offered for $21,500, Classic.com, the analytics and search engine for the collector car market, confirms the ask is slightly below the one-year rolling average of this guide’s summary for Mk1 Sprites produced between 1958 and 1961.  By clicking on the green dots in the graph below, you can navigate to each comparable car sold as a way to help you evaluate the price of the Bugeye featured here:

As a second data point, the  Collector Car Market Review Online Tool reveals the seller’s ask falls between this guide’s #2 “Very Good” estimate of $19,000 and its #1 “Excellent” appraisal of $30,000.

Austin-Healey produced its entry-level Sprite sports car from 1958 to 1971. British Motor Company (“BMC”), contracting with Don Healey, launched the car in late May 1958 in Monte Carlo, two days after that year’s Monaco Grand Prix. It was intended to be a low-cost model and spiritual successor to the sporting versions of the pre-war Austin Seven.  While Donald Healey designed the Sprite, BMC’s MG factory at Abingdon handled production.

The Mk1 Sprite quickly became affectionately known as the “frogeye” in the UK and the “bugeye” in the US because its headlights were prominently mounted on top of the bonnet, inboard of the front wings. The car’s designers had intended that the headlights could be retracted, with the lenses facing skyward when not in use; a similar arrangement was used many years later on the Porsche 928. However, cost-cutting by BMC led deletion of the flip-up mechanism, giving the car its most distinctive feature. This gave the car its appeal due to its much-loved cute appearance.  The car’s distinctive frontal styling strongly resembles the defunct American 1951 Crosley Super Sport. In total, BMC produced nearly 50,000 Mk1 Sprites between 1958 and 1961.

The problem of providing a rigid structure to a small open-topped sports car was resolved by Barry Bilbie, Healey’s chassis designer, who adapted the idea provided by the Jaguar D-type, with rear suspension forces routed through the body shell’s floor pan. The Sprite’s chassis design was the world’s first volume-production sports car to use unitary construction. The sheet metal body panels (apart from the bonnet) take many structural stresses. The original metal gauge (thickness of steel) of the rear structure specified by Bilbie was reduced by the Austin Design Office during the prototype build.  However, during testing at MIRA (Motor Industry Research Association), distortion and deformation of the rear structure occurred, and the original specification was reinstated. The two front chassis legs projecting forward from the passenger compartment mean the shell is not a full monocoque. The front sheet-metal assembly, including the hood and fenders, was a one-piece, rear-hinged unit that swung up to facilitate access to the engine compartment.

Healey sourced the 43 brake horsepower, 948 cc overhead valve engine from the Austin A35 and Morris Minor 1000 models and upgraded with twin 1​1⁄8 inch SU carburetors. The rack and pinion steering was derived from the Morris Minor 1000, and the front suspension was from the Austin A35.  The front suspension was a coil spring and wishbone arrangement, with the arm of the Armstrong lever shock absorber as the top suspension link. The rear axle was located and sprung by quarter-elliptic leaf springs, with lever-arm shock absorbers and top links. The wheels were 13″ fitted with either 520X13 cross-ply tires or upgraded with 145HR13 Pirelli Cinturato radial units.  There were no exterior door handles; the driver and passenger were required to reach inside to open the door. There was also no boot lid, owing to the need to retain as much structural integrity as possible. Access to the spare wheel and luggage compartment was achieved by tilting the seat-backs forward and reaching under the rear deck, which resulted in a large space available to store soft baggage.

The seller of this 1959 Austin Healey Bugeye Sprite notes that their car runs and drives. We believe the car’s color is Florida Green, a rare color combination with a matching, albeit worn, interior.  The rare optional radio and gas-fired heater are also interesting options on what were bare-bones cars back in the day.

“This 1959 Austin-Healey Bugeye Sprite was recently pulled from 57 years in storage, The car is finished in green over green vinyl upholstery and is powered by a 948cc inline-four mated to a four-speed manual transmission. Equipment includes a removable black soft top with sliding side curtains, Silver 13″ steel wheels with chrome Austin Healy-branded hubcaps, new tires, chrome bumpers, trim, four-wheel drum brakes, new front wheel cylinders, and rebuilt rears, all-new rubber brake hoses. New master cylinder. Dual SU carburetors, a black split tonneau cover, soft top (yellowed back window). The heater appears to be gas-operated not sure if it works. The heater is rare. (See photo). The cabin features seats upholstered in green leather with a matching dashboard (door panel inserts in poor shape), Additional equipment includes latch-style lap belts, a dash-mounted rear-view mirror, Wear is shown on the seats, dashboard, and door seals. AM radio under the dash. All gauges work, with the exception of the fuel gauge. It also comes with an extra engine, it’s all there with the exceptions of carbs, valve cover, and distributor. The car was repainted, probably in the sixties. This car came from the 2nd owner. I do have the original invoice from when it was purchased in 1962. The car runs and drives. Car is located in Phoenix, AZ. Arizona title in my name. $21,500.00 OBO
Restore or drive as-is: What would you do with this 1959 Austin Healey Bugeye Sprite for sale?  Please comment below and let us know!