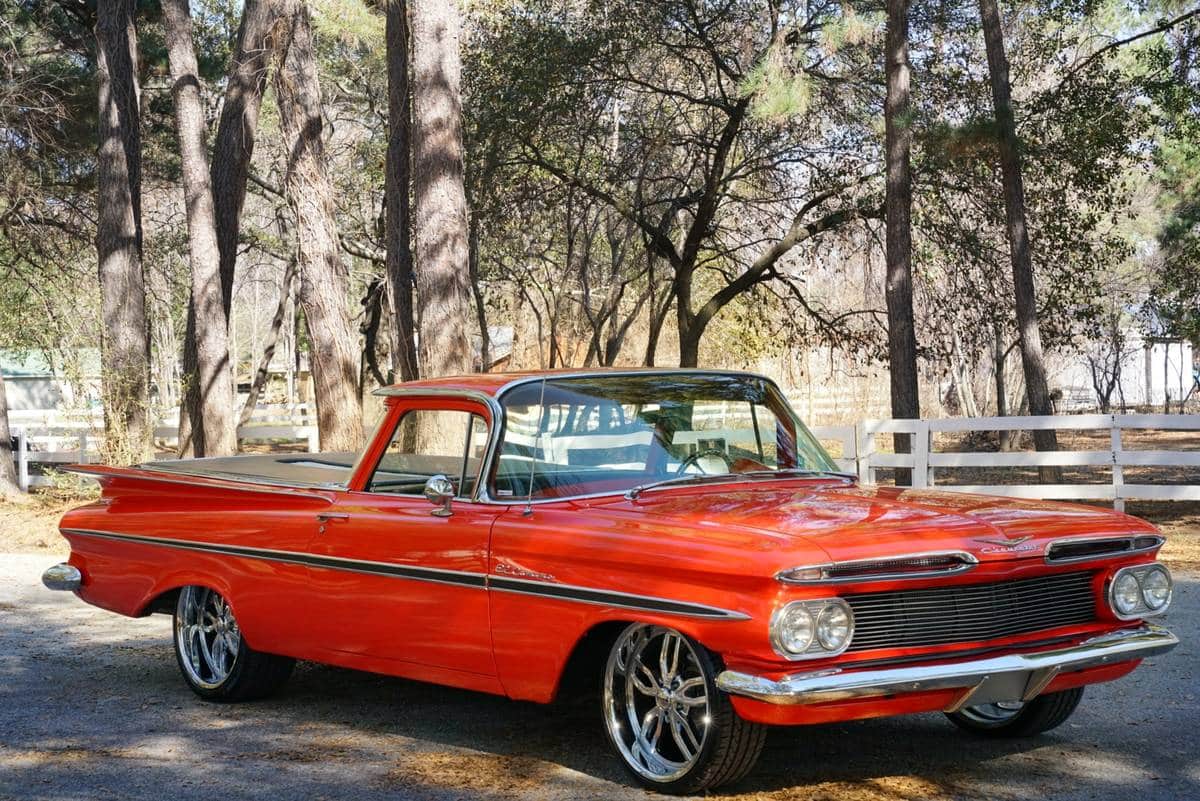 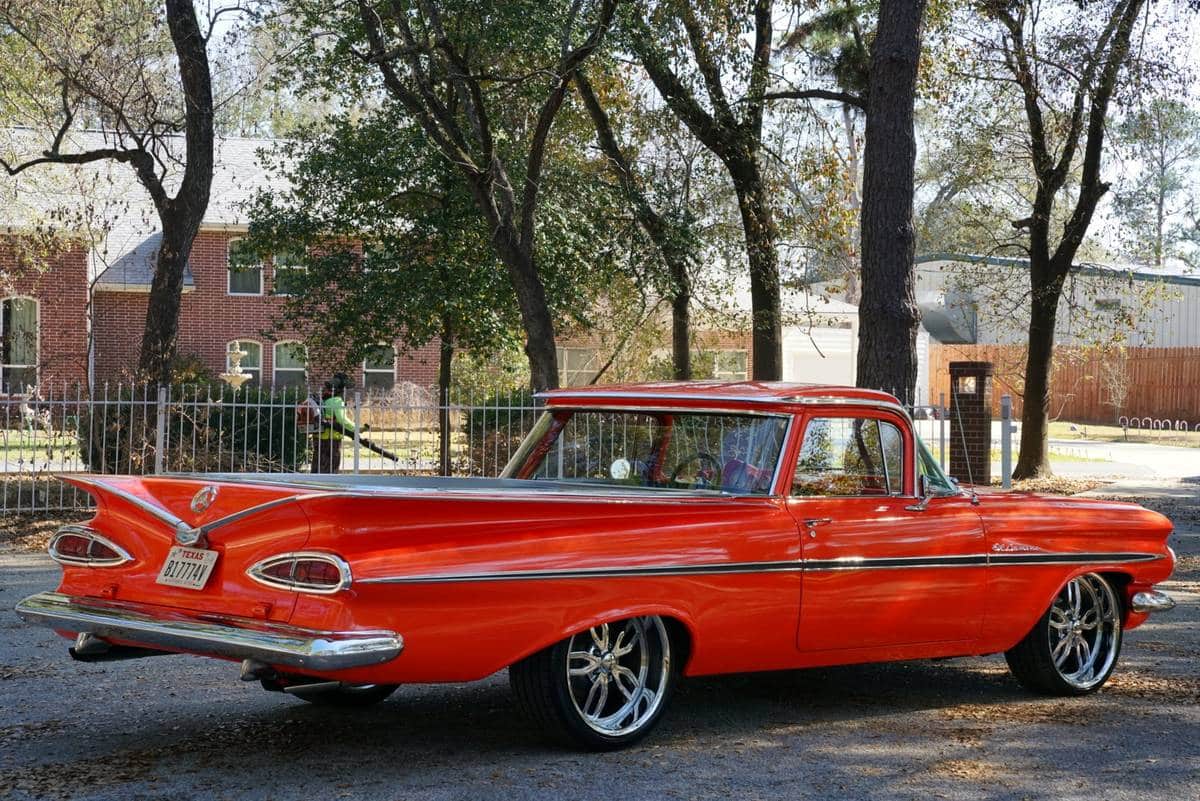 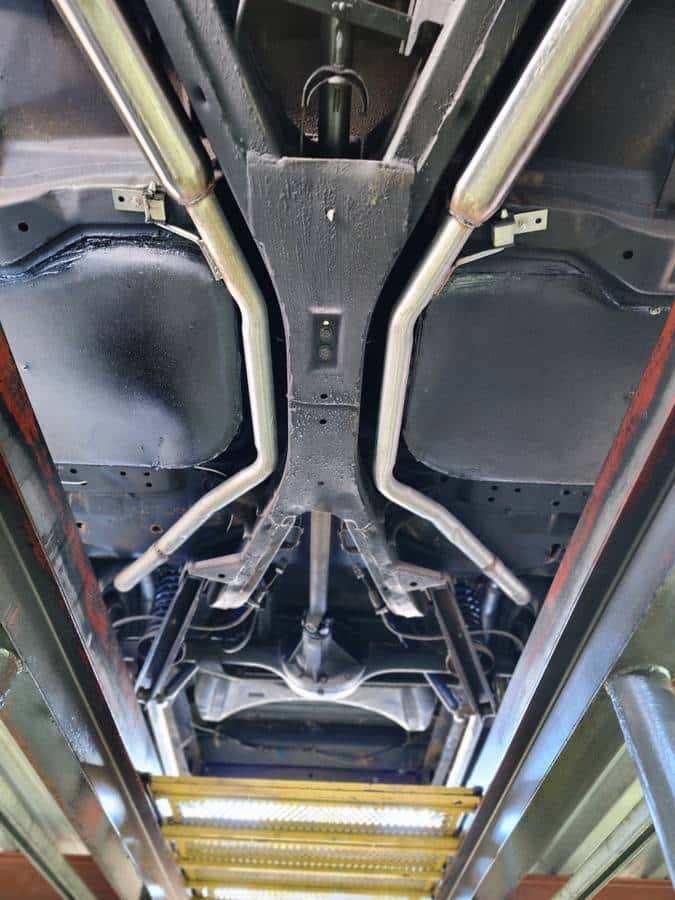 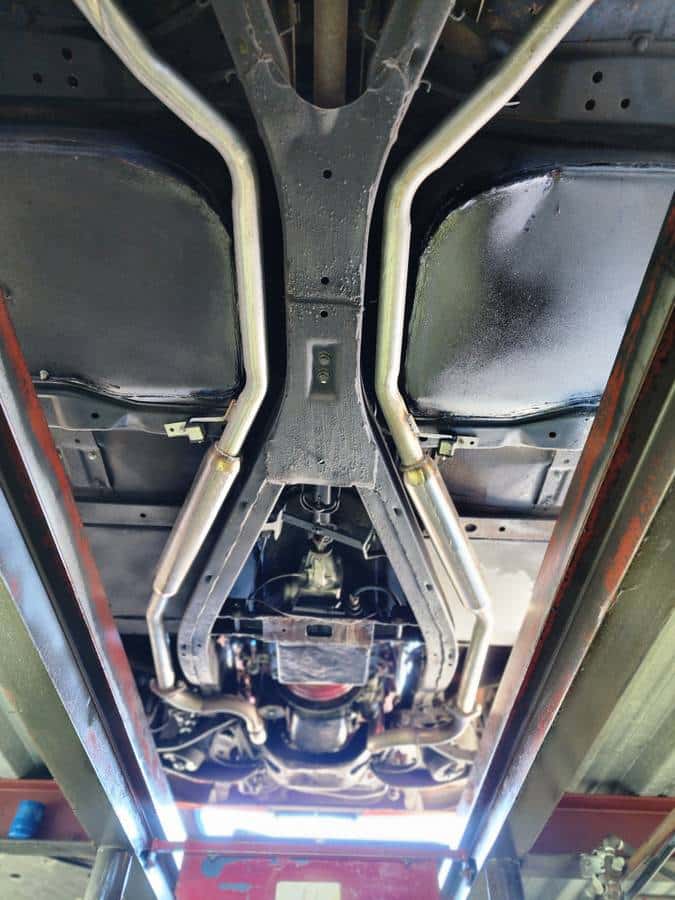 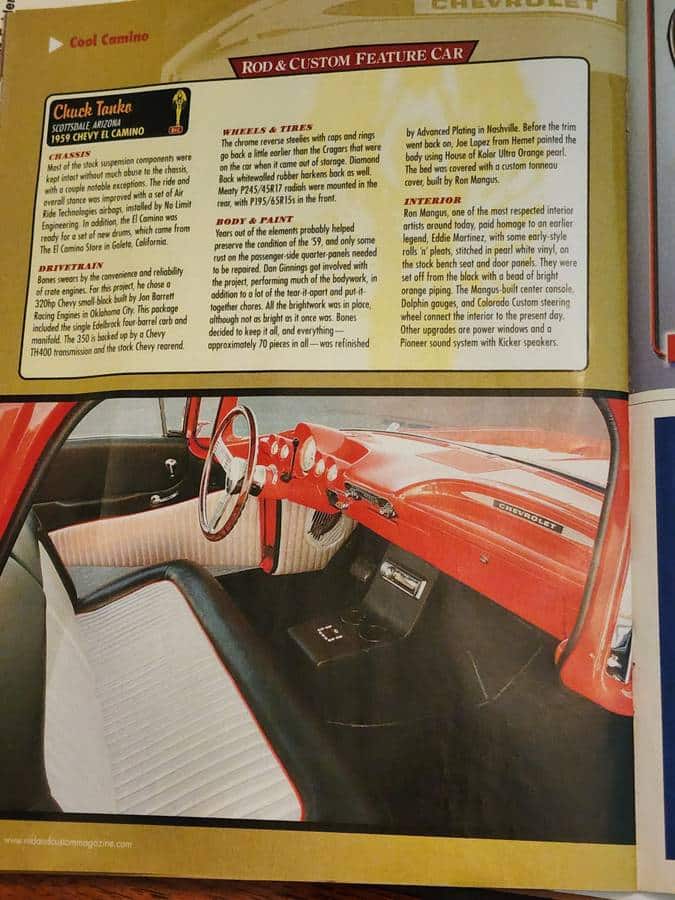 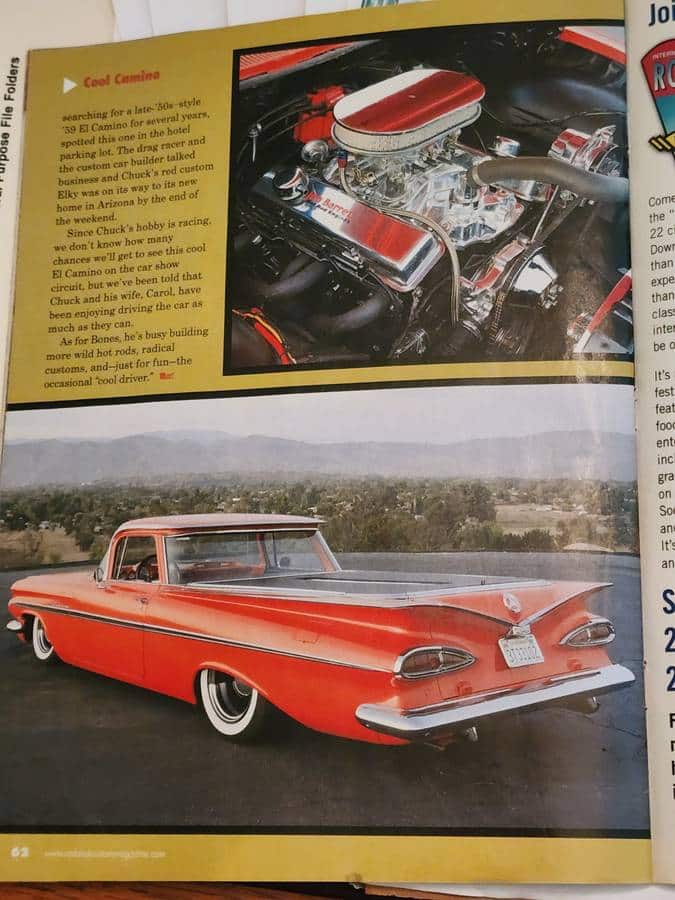 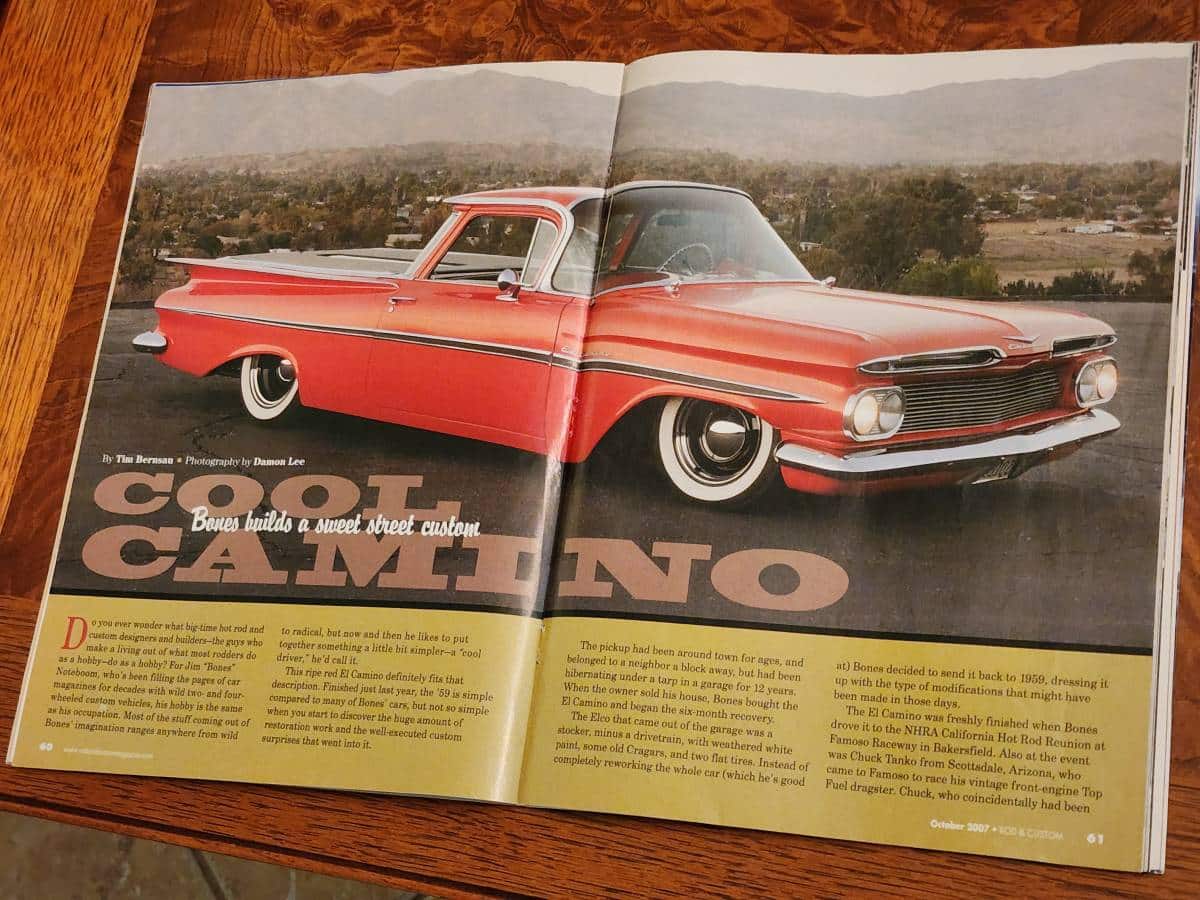 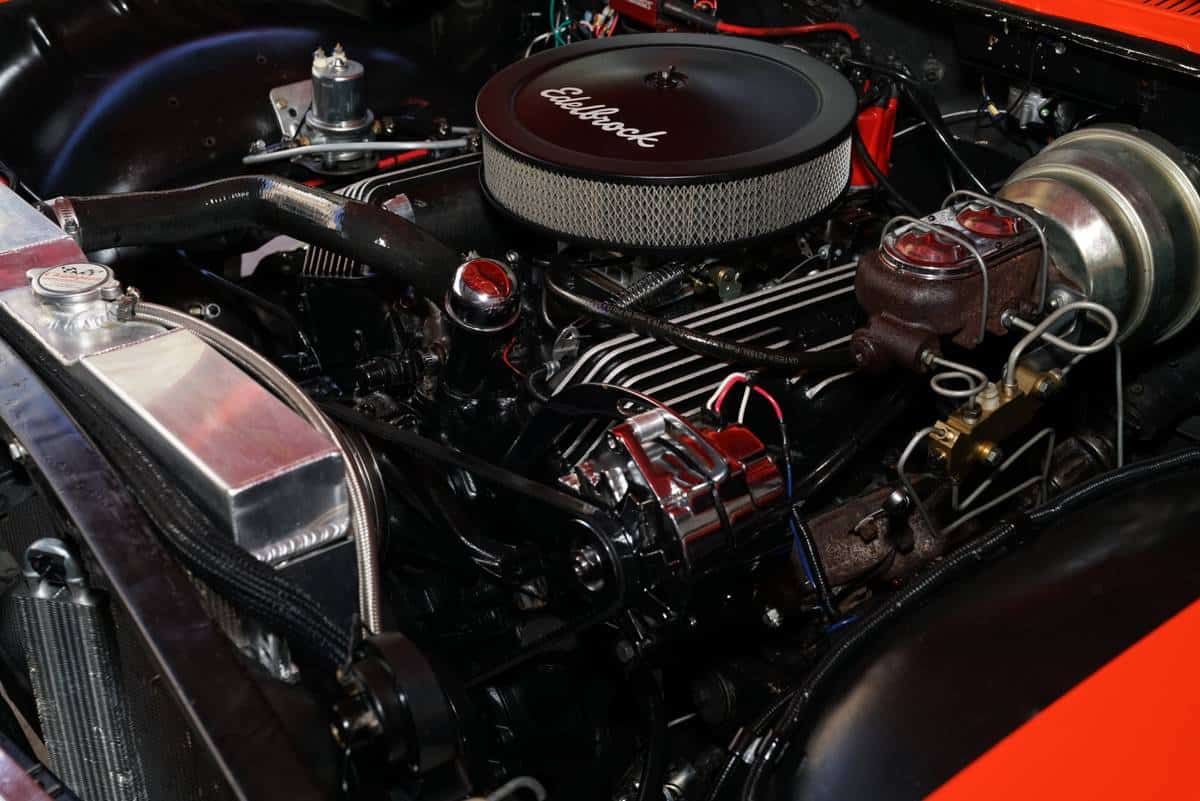 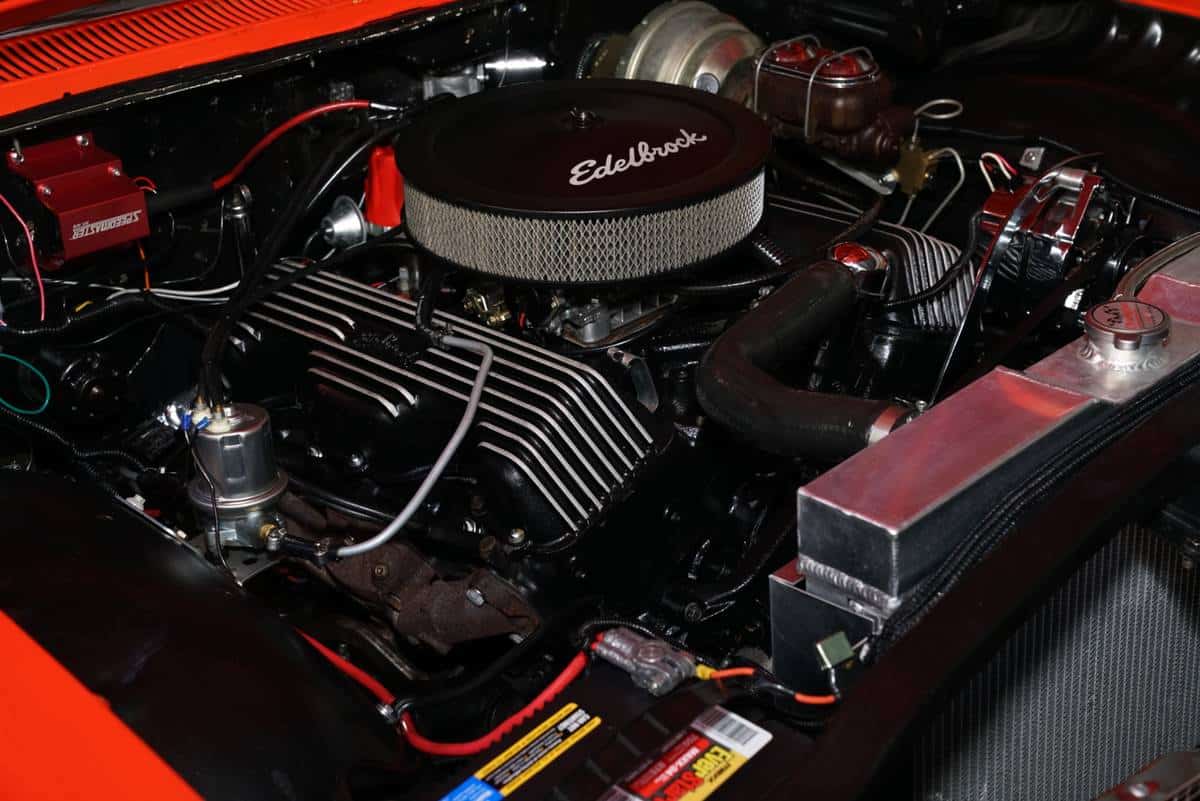 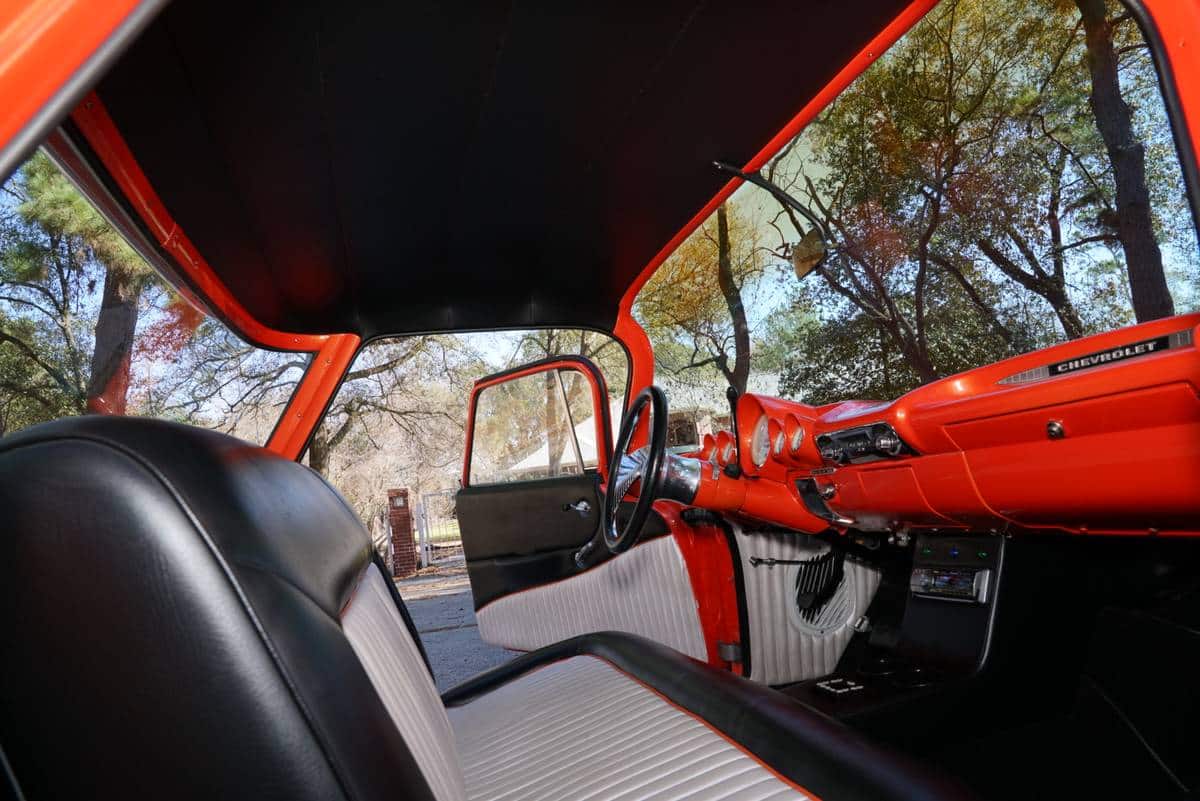 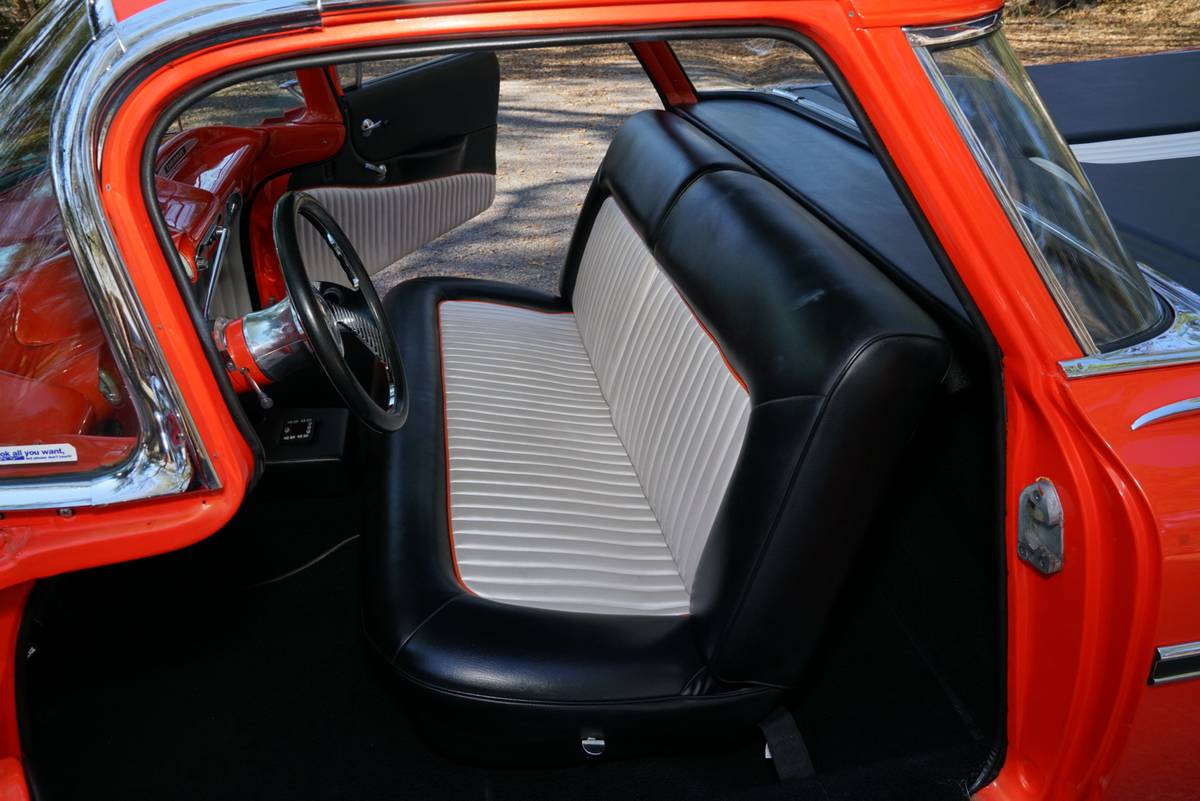 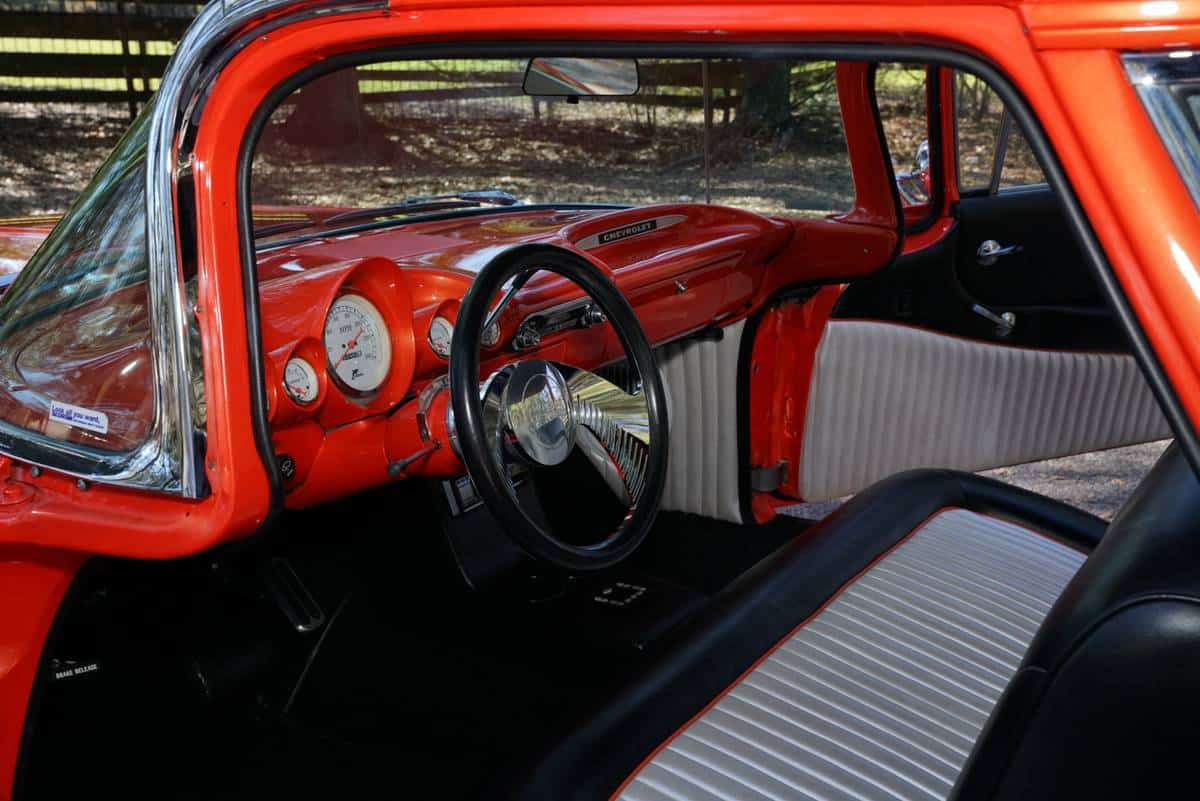 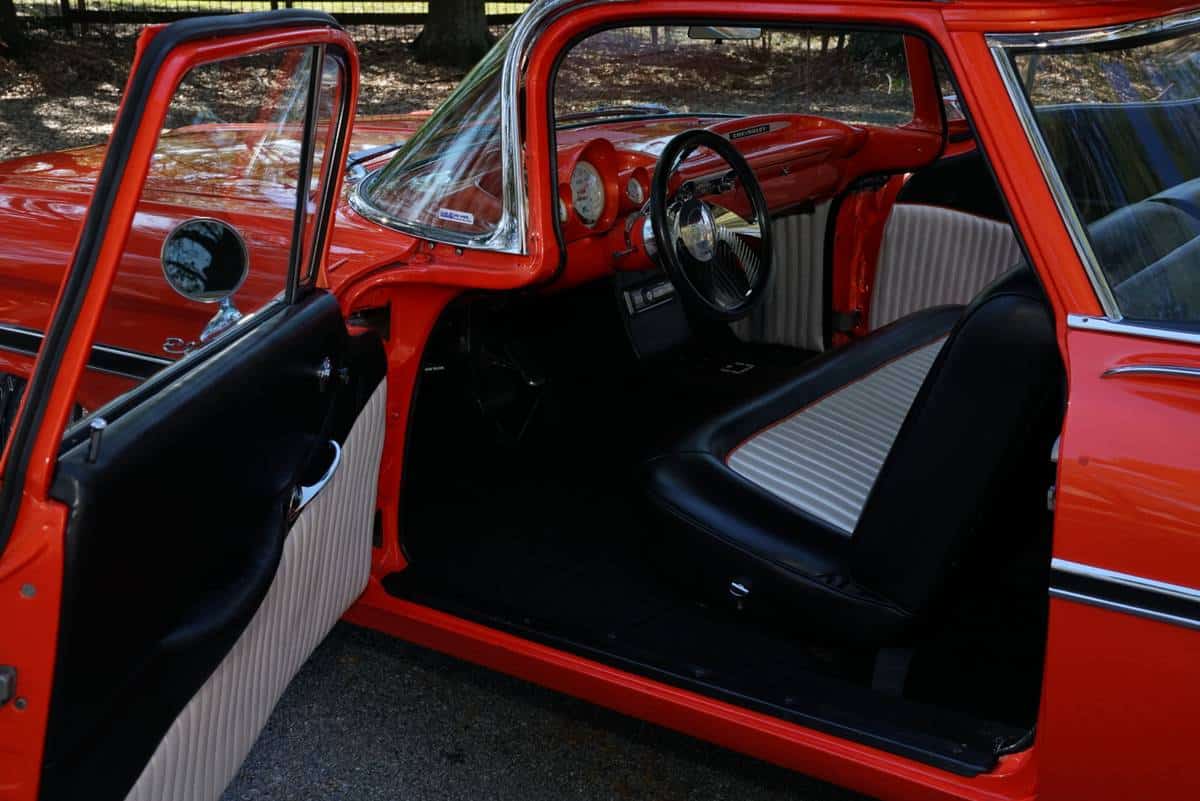 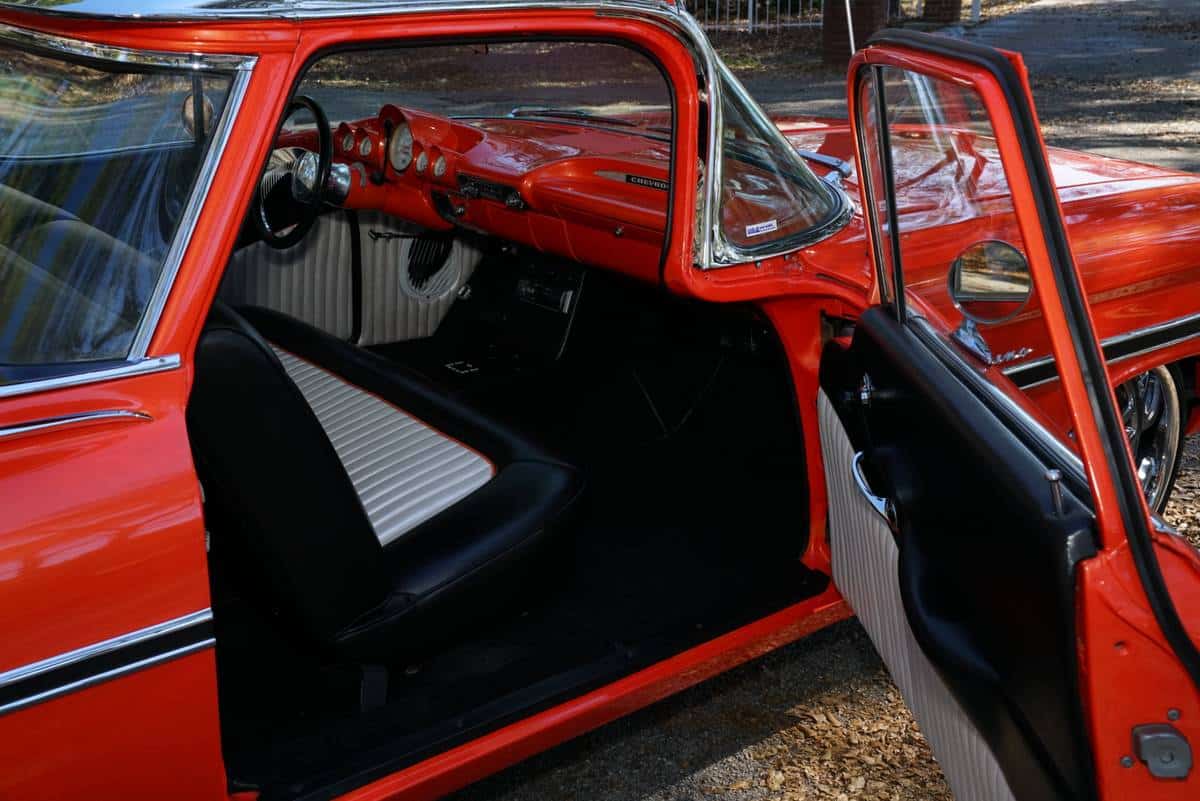 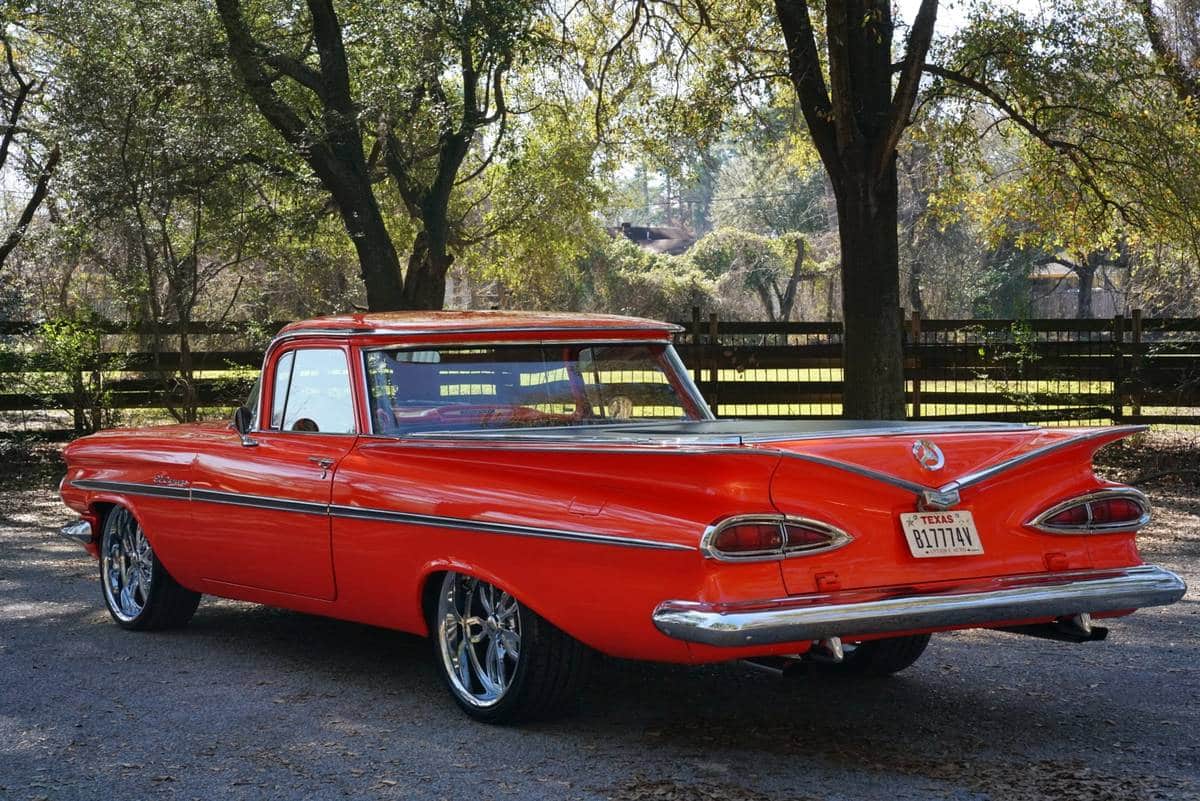 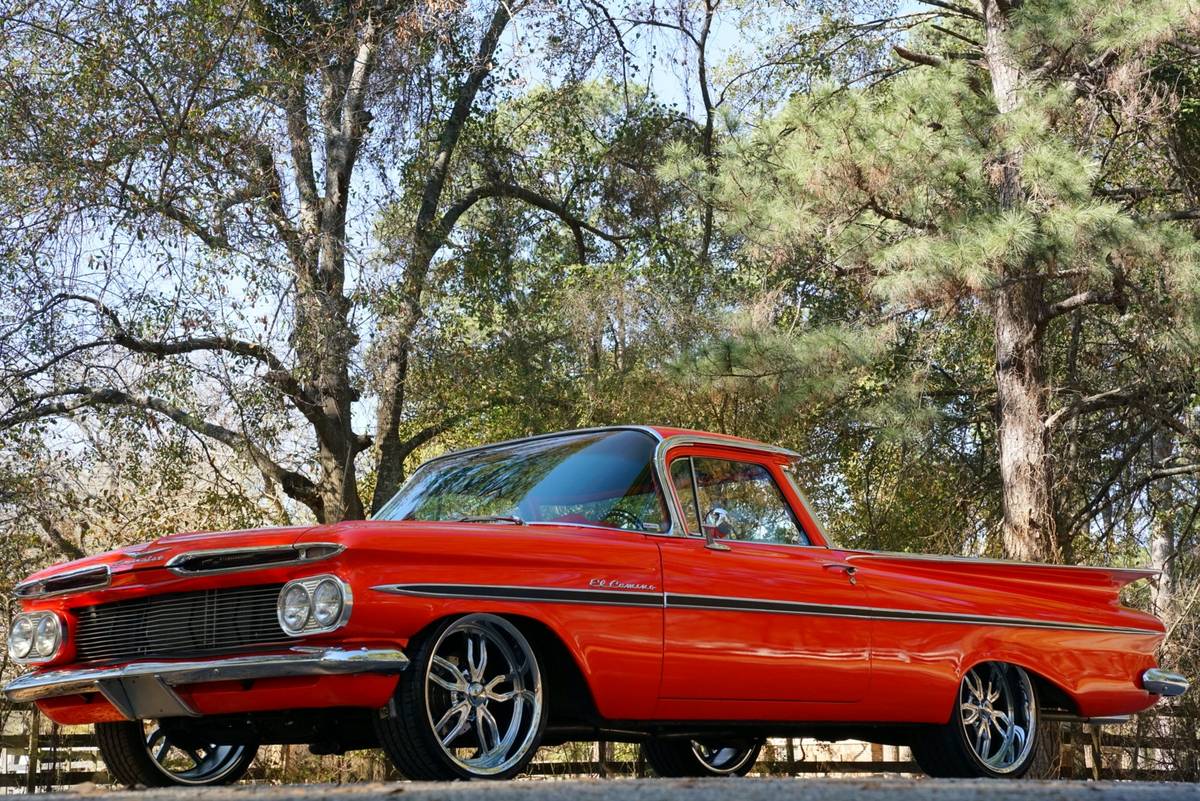 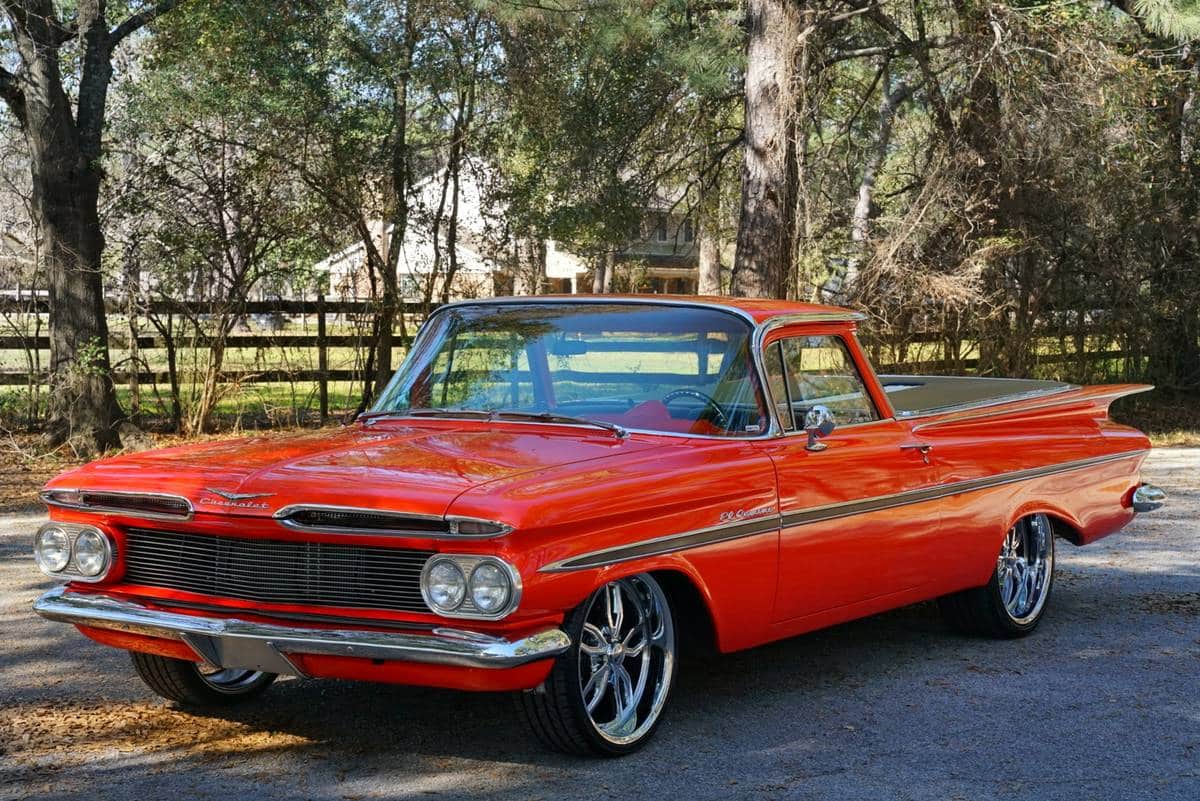 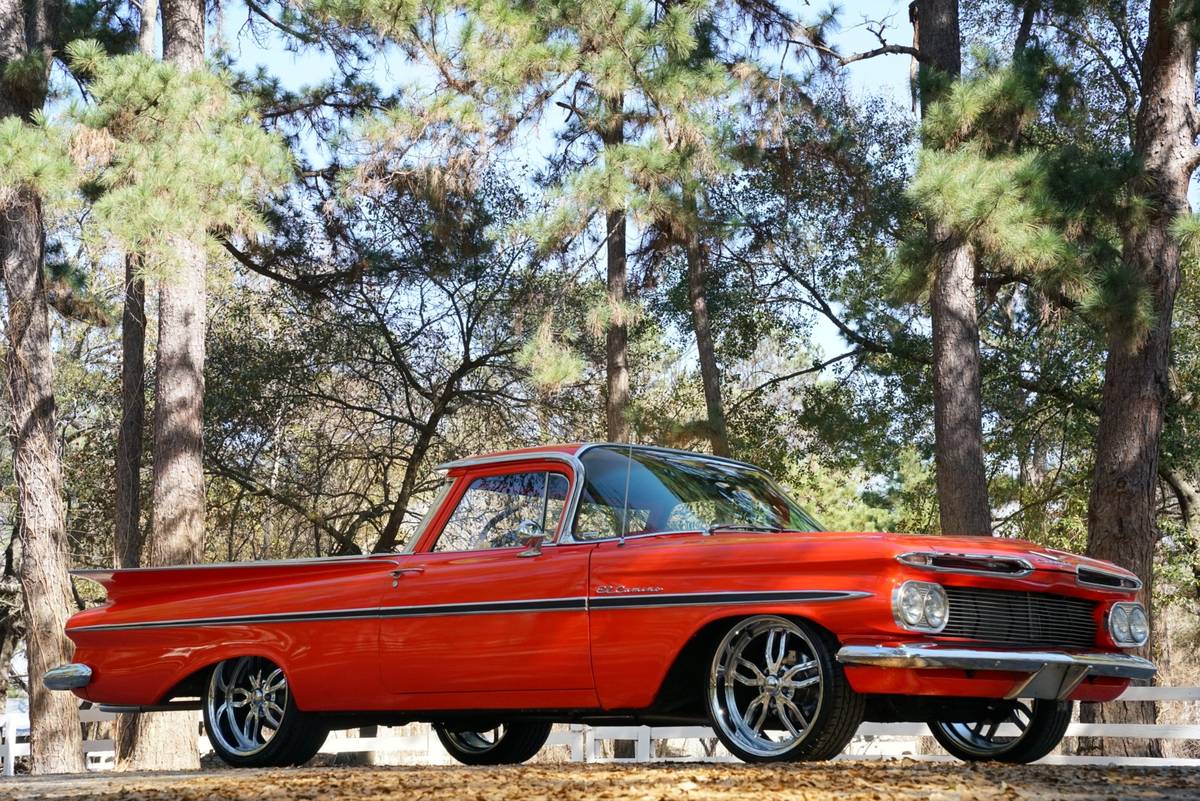 January 17, 2023 Update – This beautiful 1959 Chevrolet El Camino lasted only three days on Craiglist as the seller deleted the ad just as we went to press!  While this one got away, please reach out either by email or call us directly if you’d like to be informed when we come across something similar.

If you’re not up to speed on aftermarket upgrades for street rods and other customs, Dolphin Gauges established itself as a premium supplier of vintage-looking and digital gauge clusters that retrofit nicely into popular vintage street machines.  This full-on custom 1959 Chevrolet El Camino lasted only two days on Craigslist in January 2023 in Houston. It featured these and many more high-quality goodies the seller mentions in their detailed description.

Last offered for $59,000, Classic.com, the analytics and search engine for the collector car market, confirms the ask is in line with the one-year rolling average of this guide’s summary for first-generation Chevrolet El Caminos produced between 1959 and 1960.  By clicking on the green dots in the graph below, you can navigate to each comparable car sold as a way to help you evaluate the price of the custom El Camino featured here:

As a second data point, the  Collector Car Market Review Online Tool reveals the seller’s ask falls well above this guide’s #1 “Excellent” appraisal of $47,500 for a stock example.  The premium here is for the quality of the street machine build offered at a price you likely cannot replicate for the same amount of money.

Chevrolet offered its coupe utility (better known simply as “Ute”) El Camino between 1959 and 1960 and from 1964 to 1987. Unlike a standard pickup truck, the Chevrolet engineers adapted the El Camino from the standard two-door Chevrolet station wagon platform. Then they integrated the cab and cargo bed into the body.

In 1957, Ford introduced the Ranchero, establishing a new market segment in the U.S. of an automobile platform-based coupé utility. In 1959, Chevrolet responded with the El Camino to compete with Ford’s full-sized Ranchero. The original El Camino and Ranchero would compete directly only in the 1959 model year.

Introduced in the 1959 model year in response to the success of the Ford Ranchero coupé utility, its first run, based on the Biscayne’s B-body, lasted only two years.  Like the Ranchero, it was based on an existing and modified platform, the new-for-1959 Brookwood two-door station wagon, based on the redesigned full-sized Chevrolet of that year. Highly stylized, it initially sold 50% more briskly than the more conservative Ranchero, some 22,000 to 14,000.

Unlike the Brookwoods wagon and a sedan delivery variant, the El Camino was available with any full-sized Chevrolet drivetrain. It came in a single trim level, its exterior using the mid-level Bel-Air’s trim, and the interior of the low-end Biscayne. Its chassis featured Chevrolet’s “Safety-Girder” X-frame design and a full-coil suspension, both introduced in 1958. The 119-inch wheelbase was 1.5 inches longer, and the overall length for all 1959 Chevrolets was up to 210.9 inches. The El Camino’s payload rating ranged from 650–1,150 pounds, with gross vehicle weights ranging from 4,400–4,900 pounds depending on the powertrain and suspension. The somewhat soft passenger car suspension of the base model left the vehicle level without a load, in contrast to the Ranchero, where standard 1100-pound rated heavy-duty rear springs gave it a distinct rake when empty. In its second and final year, the quirky Level Air suspension option was listed as available but was almost never seen on any Chevrolet model, much less an El Camino.

The 1959 El Camino was promoted as the first Chevrolet pickup built with a steel bed floor instead of wood. The floor was a corrugated sheet metal insert secured with 26 recessed bolts. The floor pan from the Brookwood two-door wagon was concealed beneath it, complete with footwells. Box capacity was almost 33 cubic feet.  A total of 22,246 El Caminos were produced for 1959. That bested the count of 21,706 first-year Rancheros made in 1957 and the 14,169 Ford sedan pickups built in direct competition for the 1959 model year.

The seller provides this cool walk-around video of their one-of-a-kind 1959 Chevrolet El Camino for sale:

“1959 Chevrolet El Camino – rust free!  Out of the 22,246 made in 1959, this 1 of the nicest around! As you see in the picture it did have an air ride with memory position hooked up to her, and the previous owner was a 90-year-old man that didn’t like it and changed the suspension (I have the air ride kit and everything to hook it back up and its free with purchase). The paint is House of Kolor ultra orange pearl – it looks beautiful! The chrome trim and bumpers are like brand new all rubber and gaskets and glass is like new body is super straight and drives like a top!348ci motor and rebuilt with almost 3000 miles on it ( also have the three carburetor set up with manifold comes free with purchase )

has power windows that work 😉

Coilover on all four corners

has factory stereo still in her with a custom design box with aftermarket stereo with speakers in front and 2 6×9 in the rear behind the seat.

last but not least she has brand new staggered 20×10 rear & 20×8.5 front rims and new tires with 10 miles on them as i just bought them . Also comes with like new 2nd set of rims and tires that are in the bed as we speak, as seen in the video, and come free with purchase

this is a turn-key start and drive-anywhere ride. Show quality and needs nothing ! It was a arizona show truck before it was sold and been a texas ride since .

I buy and sell hot rods and have been doing so for 20 years with 100% ratings anywher found for a reason ! I take pride in my work and ill be the best experience you had if i get the chance to earn your business…

ask wife before calling me 😉“

Show or go: What would you do with this 1959 Chevrolet El Camino street machine for sale?  Please comment below and let us know!