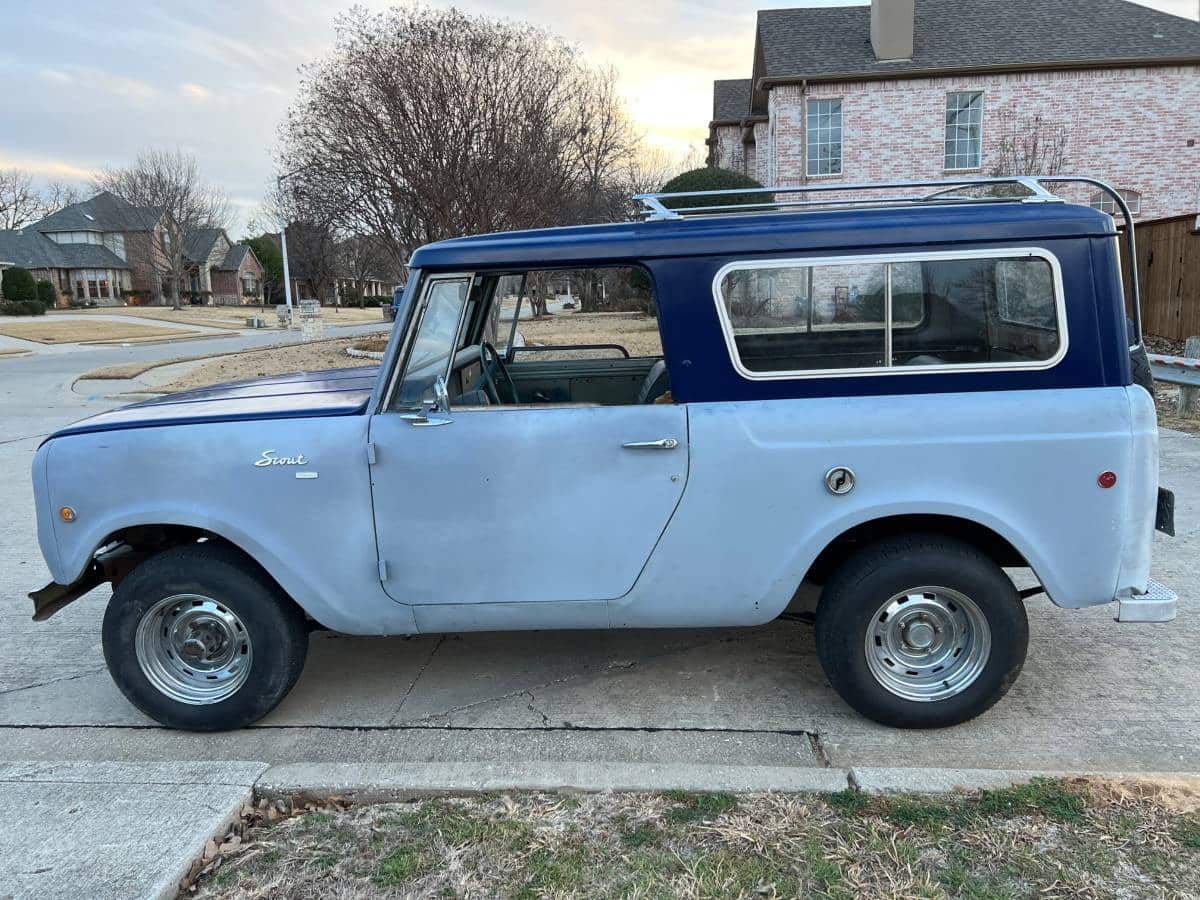 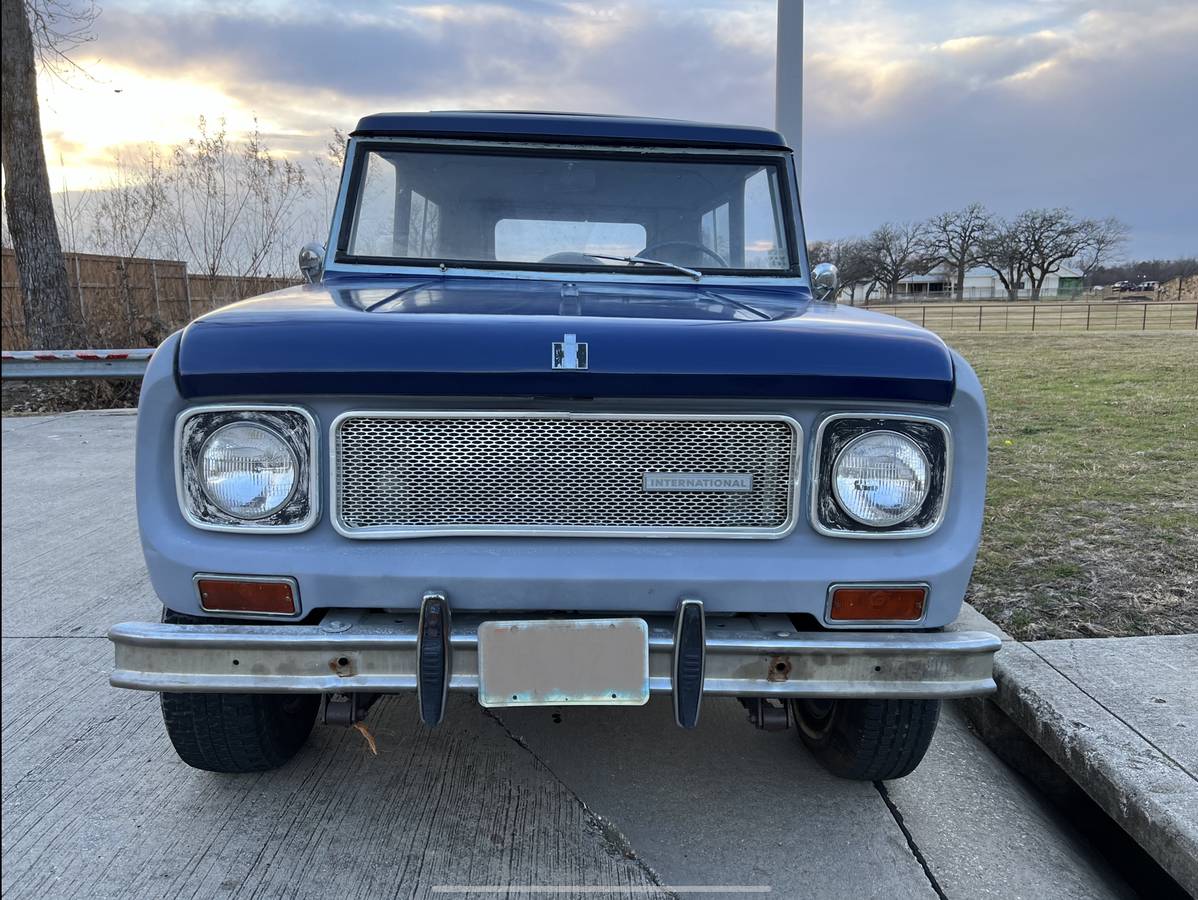 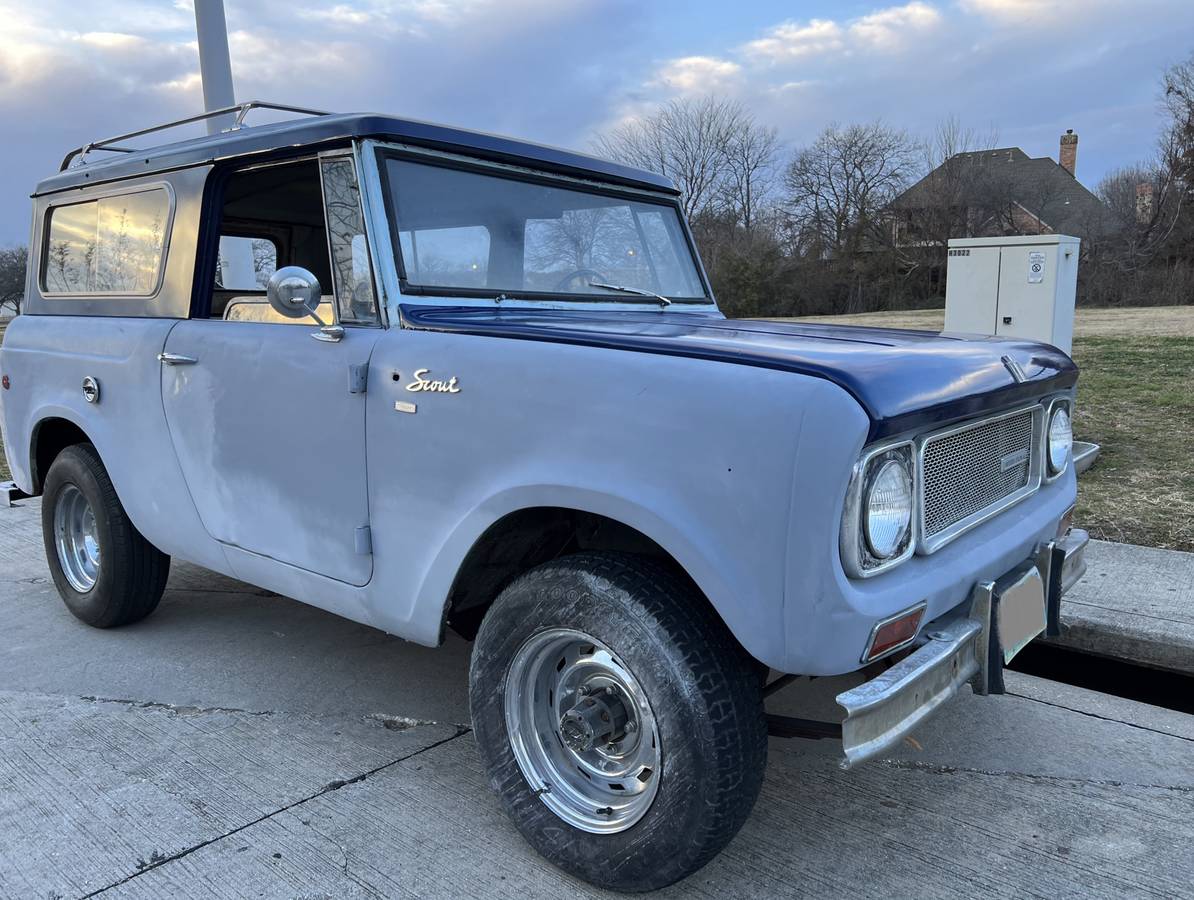 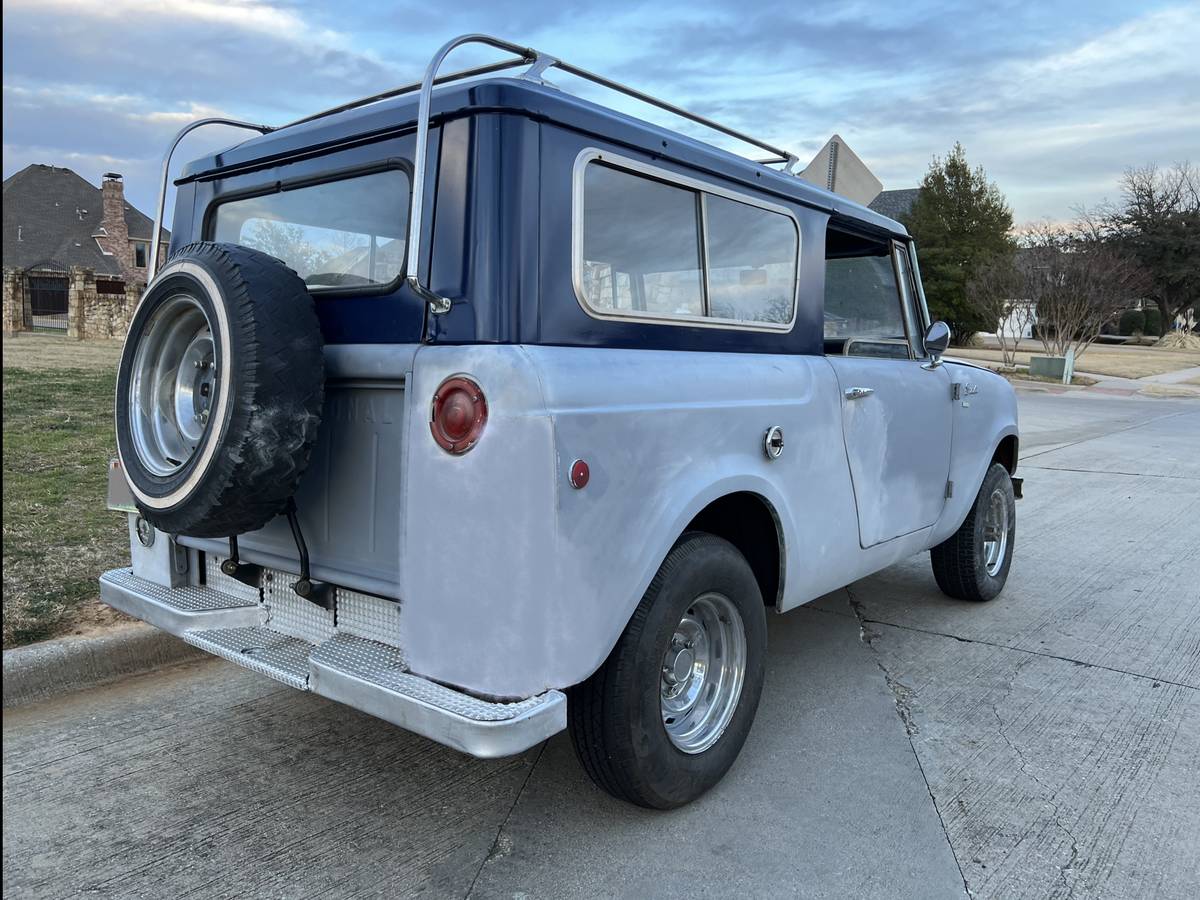 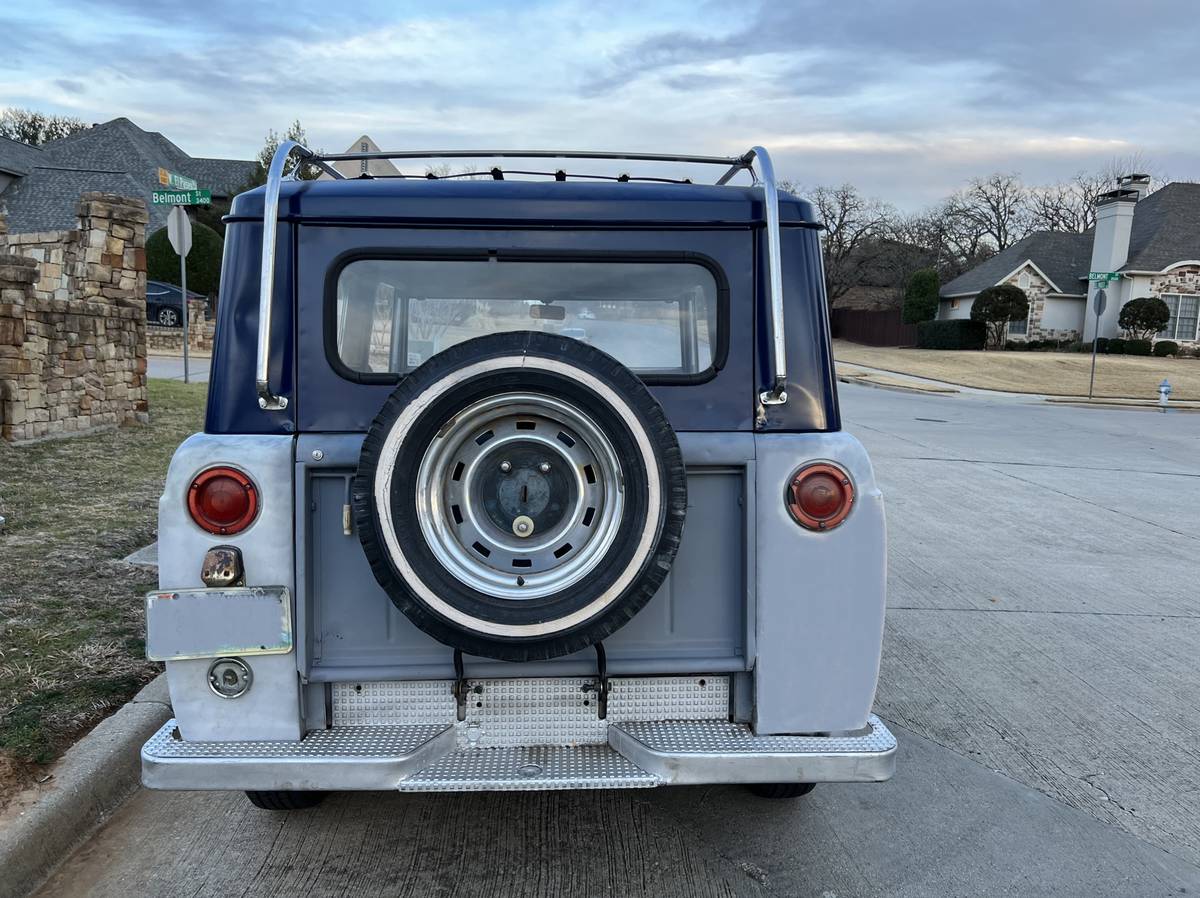 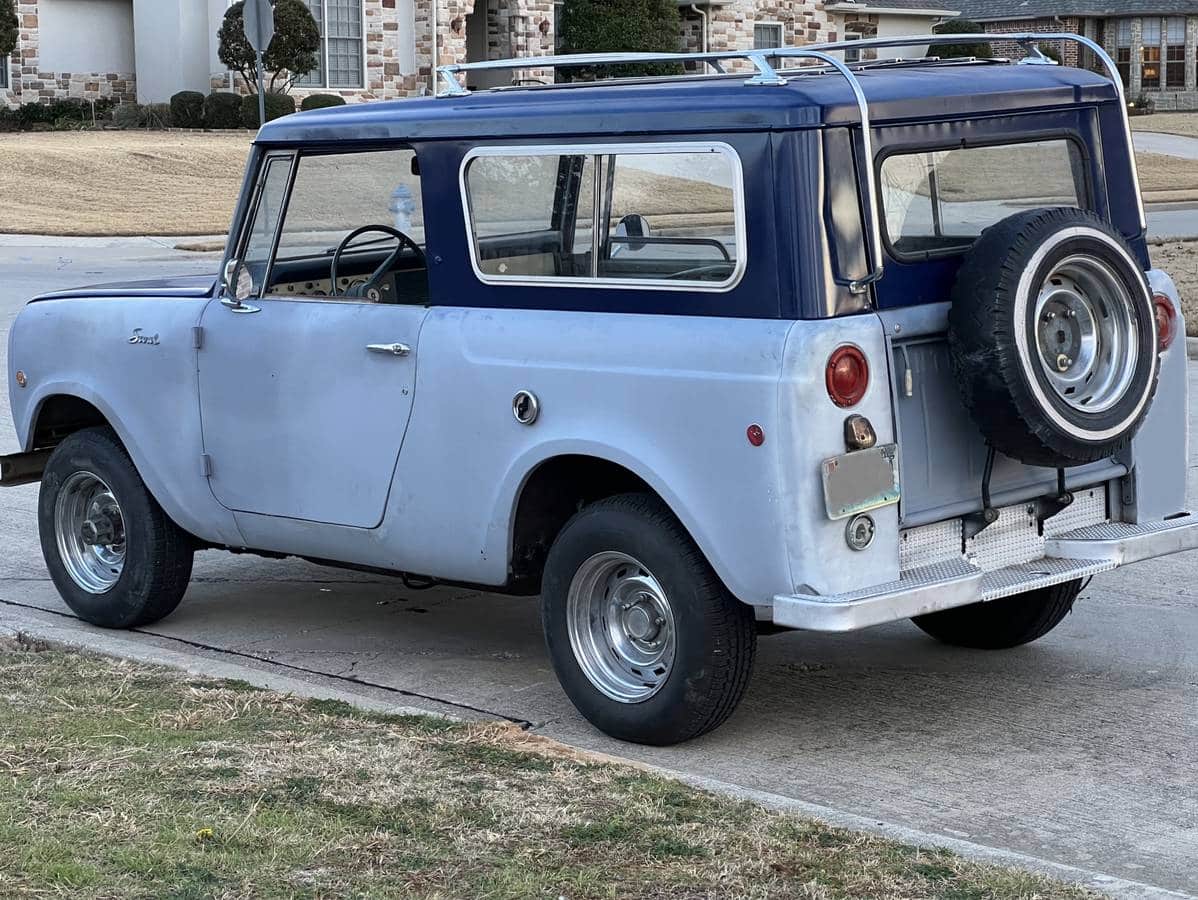 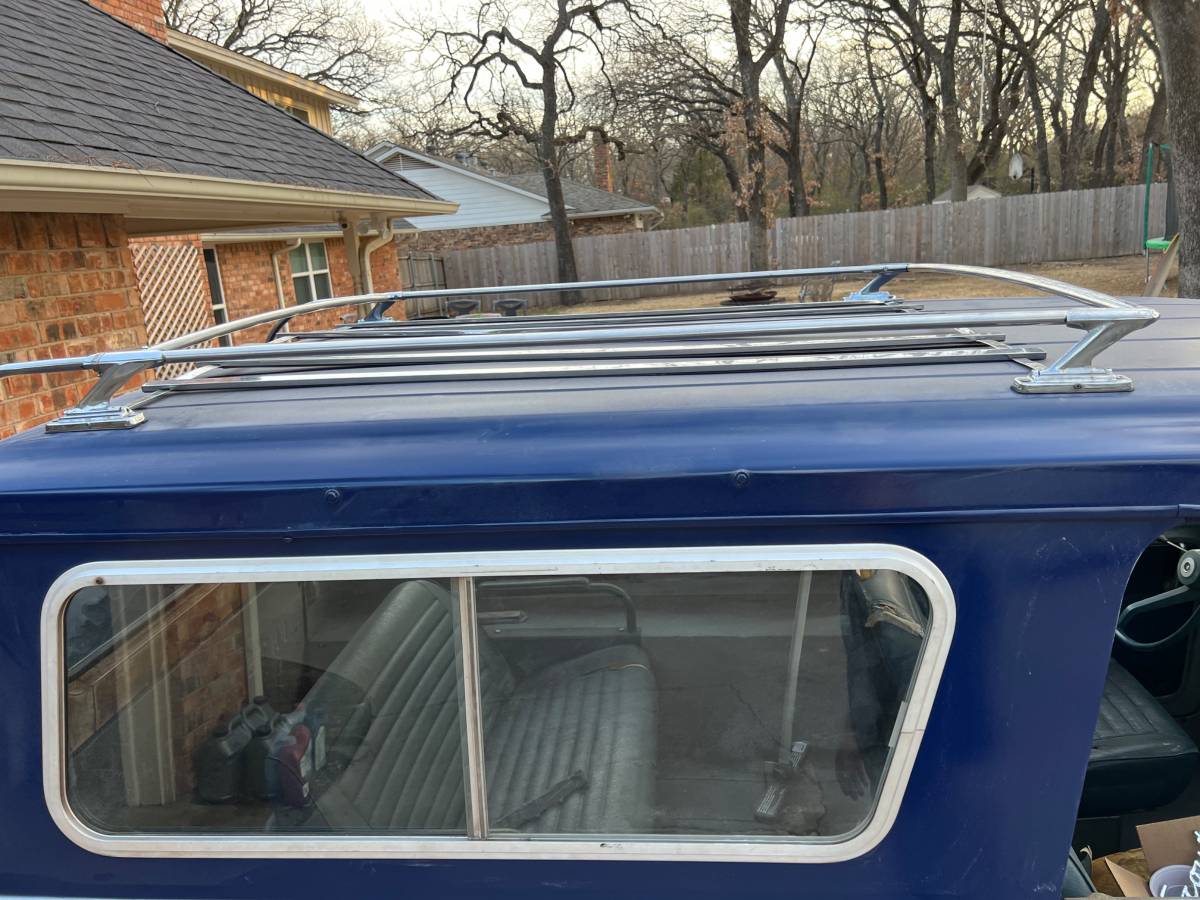 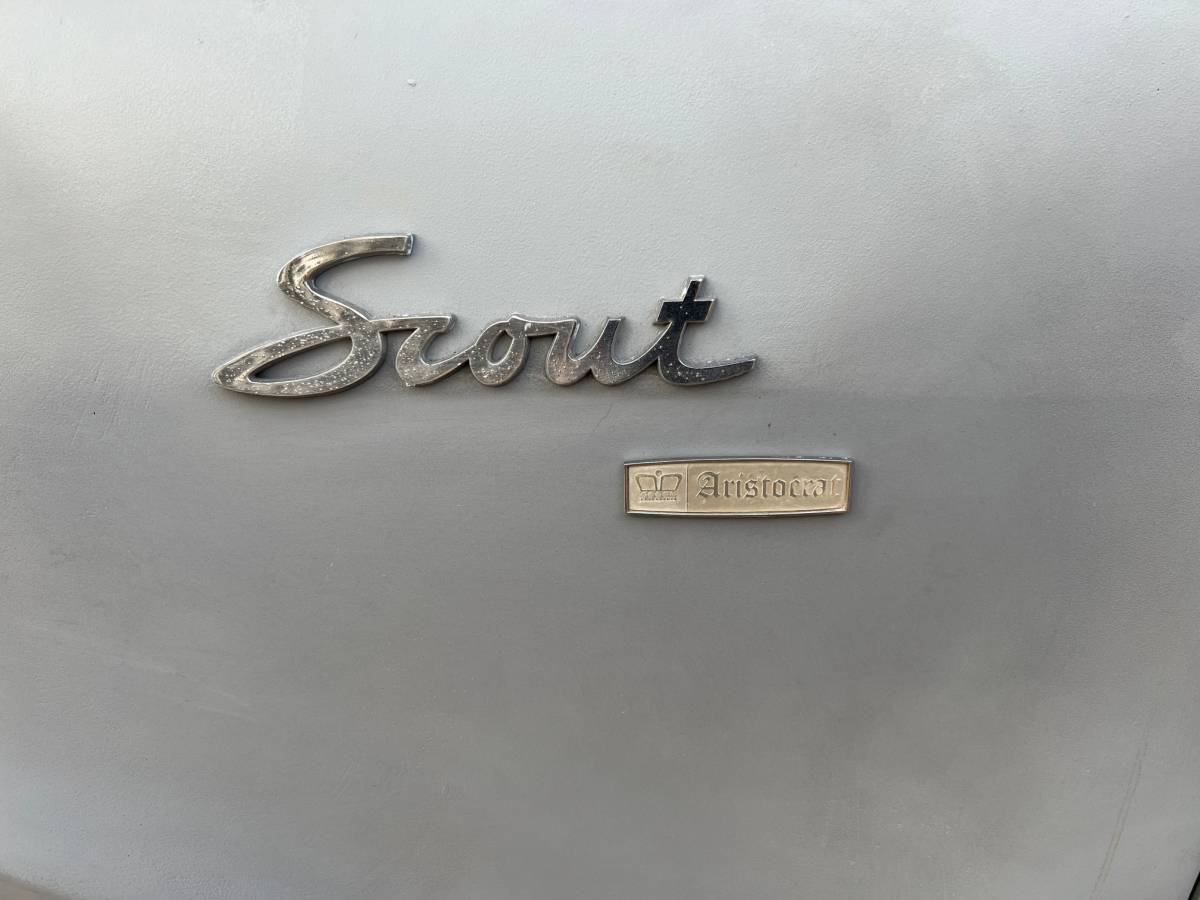 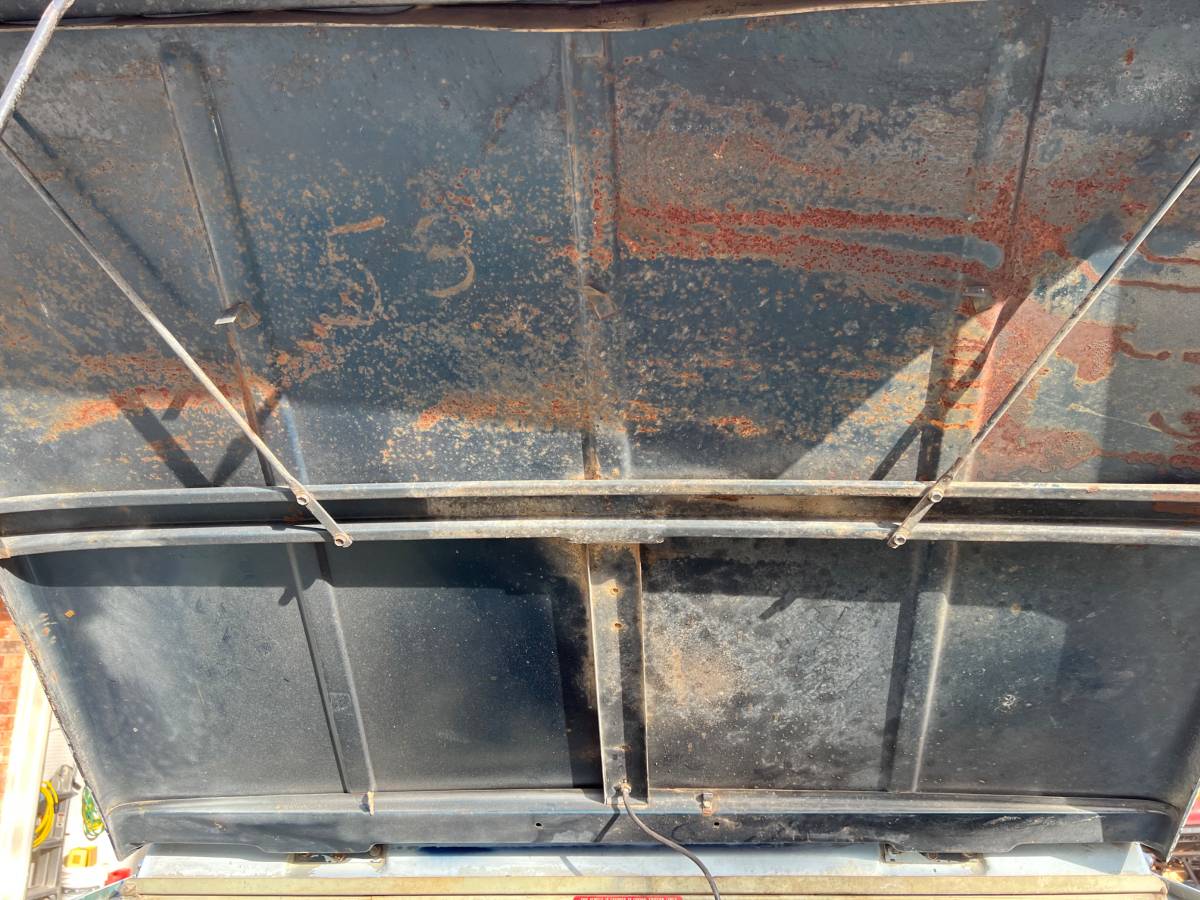 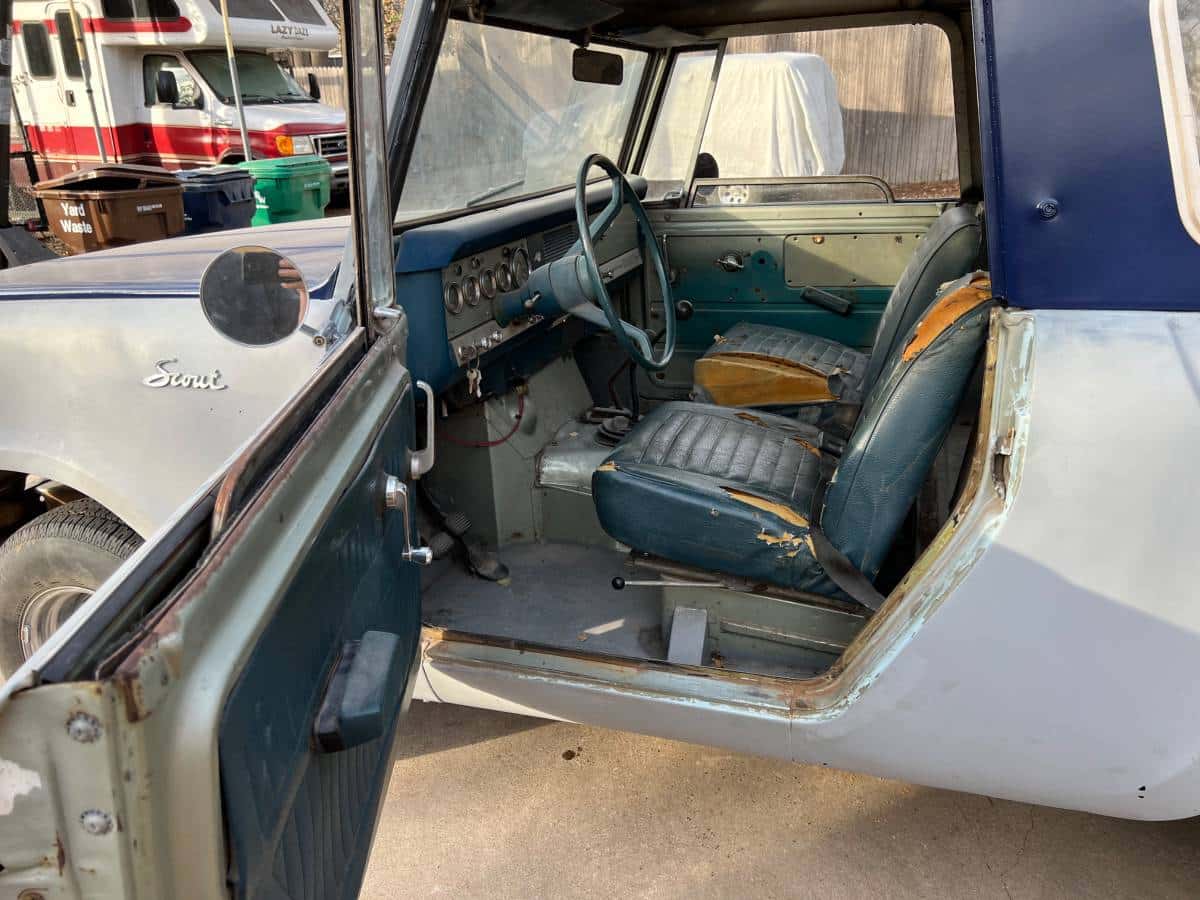 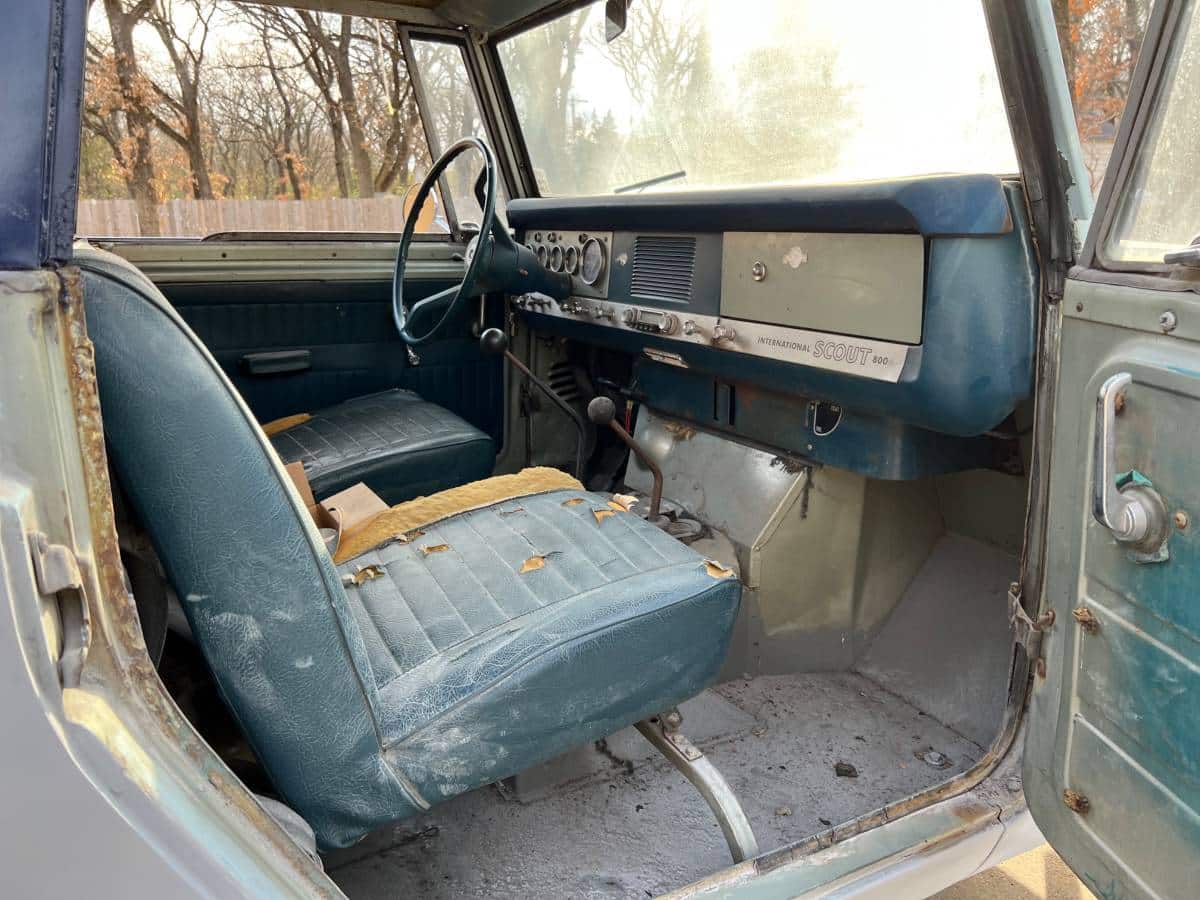 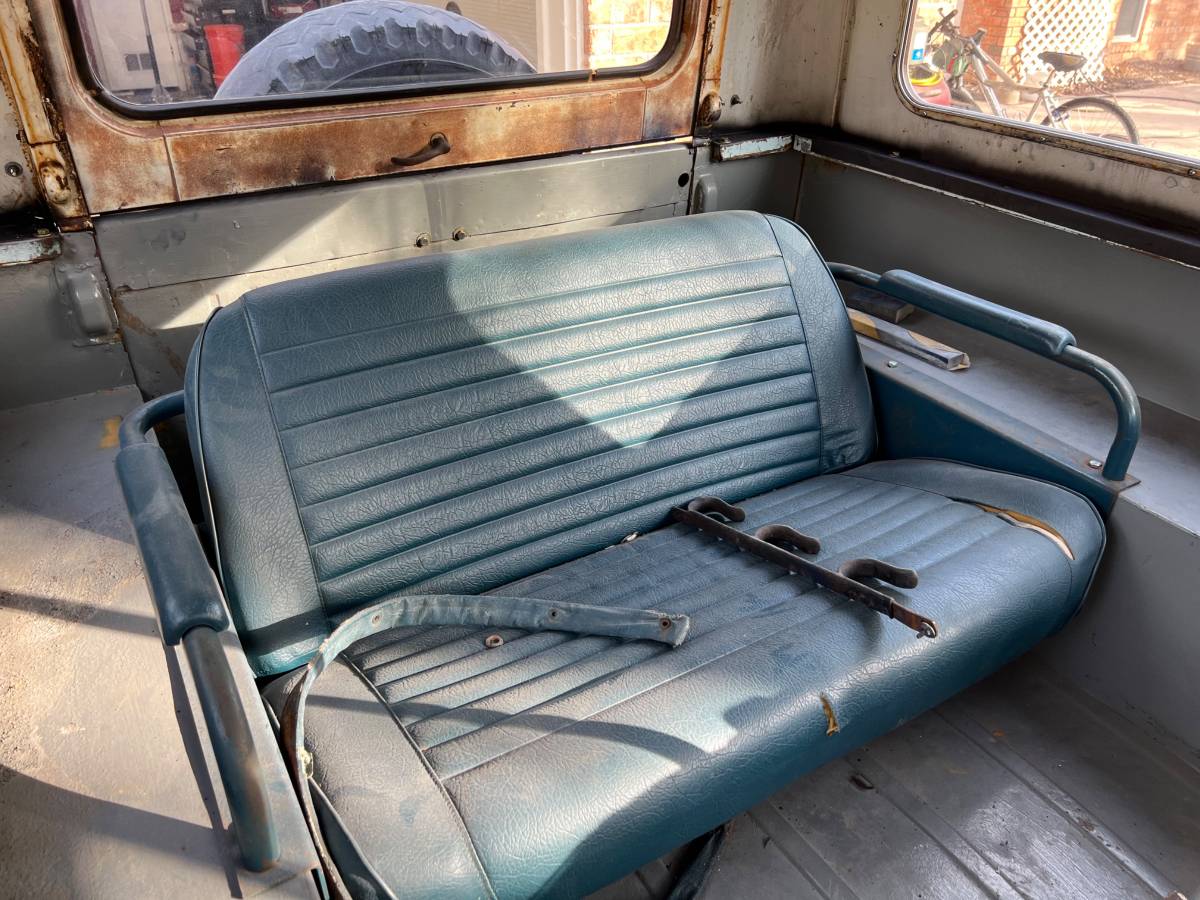 The International Harvester (“IH”) Scout was the right product offered at the right time when it launched in 1961. Within its first three model years, IH produced 100,000 units.  Those were the kind of production numbers that used to make the Big Three automakers notice, so it’s no surprise that by 1966 Ford launched its Bronco and Chevrolet its K5 Blazer for 1969.

With competitive offerings from the Ford and Chevy eroding Scout sales, IH product planners developed a number of special editions. They also offered a choice of inline-four-, inline-six-, or V8 power, all designed to convince people to buy Scouts.  For 1969, IH offered the Aristocrat special edition Scout.  In addition to its chrome-styled steel wheels and luggage rack, Aristocrat Edition Scouts had a distinctive upgraded blue interior and special two-tone exterior paint.

This 1969 International Scout Aristocrat Edition, currently listed here on Craigslist in Denton, Texas (Dallas), features the extremely rare 232 cubic inch inline six-cylinder engine, which was offered only in the early part of 1969 before IH management reduced consumer’s choice to either the inline-four (which was essentially the company’s V8 cut in half) or the 304 cubic inch V8.  This driver-quality example appears to have minimal rust and is ready for a quality restoration.

Currently offered for $17,900, Classic.com, the analytics and search engine for the collector car market, confirms the ask is slightly below the one-year rolling average of this guide’s summary for International Scouts of all body styles and powertrains produced between 1965 and 1971.  By clicking on the green dots in the graph below, you can navigate to each comparable car sold as a way to help you evaluate the price of the Scout featured here:

As a second data point, the  Collector Car Market Review Online Tool reveals the seller’s ask falls between this guide’s #3 “Good” estimate of $16,950 and its #2 “Very Good” appraisal of $27,300 before making adjustments for the rare inline-six powertrain and the even rarer Aristocrat package,

Truck and Tractor manufacturer International Harvester (“IH”) dipped its toes in the consumer market with the Scout SUV produced from 1961 through 1980 across two primary generations.  A precursor of more sophisticated SUVs to come, it was created as a competitor to the Jeep, and it initially featured a fold-down windshield. The Scout and second-generation Scout II were produced in Fort Wayne, Indiana, as two-door trucks with a removable hard top with options of a full-length roof, half-cab pickup, and/or soft top.

The 800A replaced the 800 in November 1968. Improvements included more creature-comfort options, a slightly different front-end treatment, drivetrain upgrades (heavier rear axle and quieter Dana 20 transfer case), and the options of a 196 four-cylinder, 232 six-cylinder, 266 V8, or 304 V8. The inline-six was only offered for a short period in early 1969.  The 800A’s grille was in three segments: the center grill and two matte-black headlight bezels. The Light Line of pickup trucks received bodywork similar to that of the Scout in late 1969.

The 800A could still be ordered with the Sportop (a slanted sporty top made of canvas or fiberglass), and later in Aristocrat and SR-2 packages. The Aristocrat was the final version of the original-bodied Scout. These trucks had a blue, vinyl interior, were painted blue and silver, and had a chrome roof rack; the four-wheel-drive was standard for most models. The 1969 Aristocrat was the first Scout to feature chromed-styled steel wheels.

If you want to have a shot at actually making money restoring a classic vehicle in 2023, your only opportunity anymore is in vintage SUVs and trucks. This 1969 International Harvester 800A Aristocrat edition for sale appears to have great bones with minimal rust that a quality paint job and some reupholstery work will do wonders for.

If you are serious about buying this Scout, you can start the conversation by emailing the seller.  When you connect, please remember to mention you saw their Aristocrat restoration candidate featured here on GuysWithRides.com. Good luck with the purchase!

“1969 International Scout 800A Aristocrat.  It runs and drives. Very little rust. This is a solid rig that just needs finishing touches to be a fun weekend cruiser. New brakes. Fresh tune-up and carburetor.  It has the original 6-cyl 232 engine and 3-speed manual transmission.  Clean Texas title.  I have the line set ticket. Contact me if you are serious.”

Restore or Drive As-Is: What would you do with this 1969 International Scout 800A Aristocrat Edition for sale?  Please comment below and let us know!