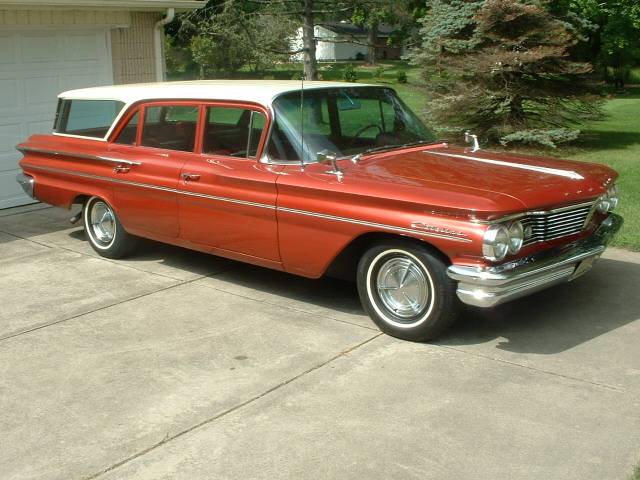 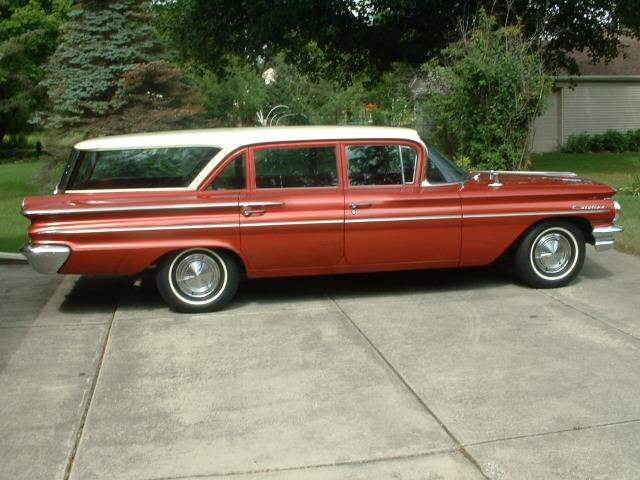 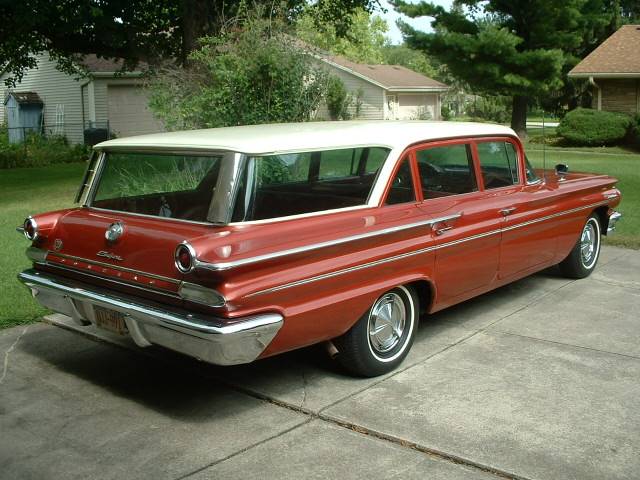 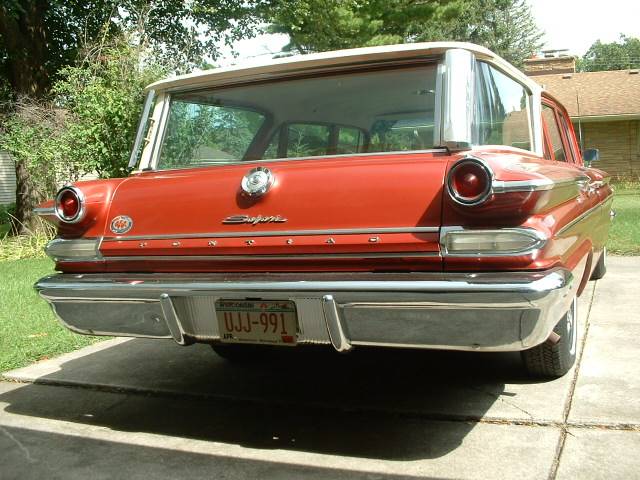 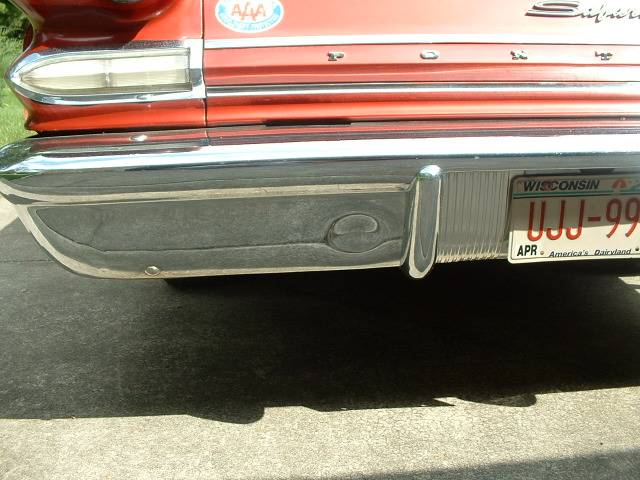 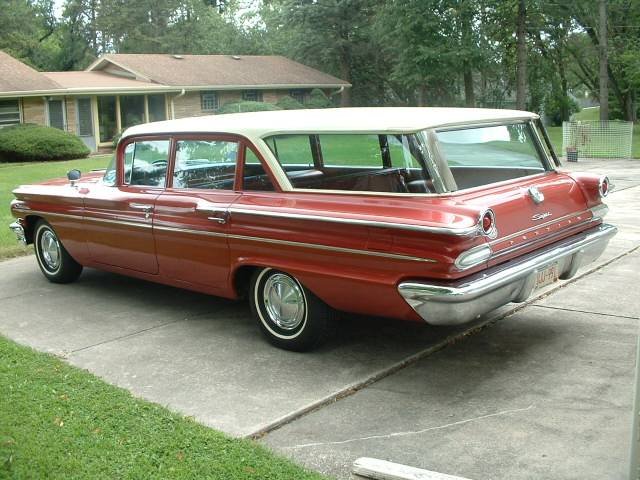 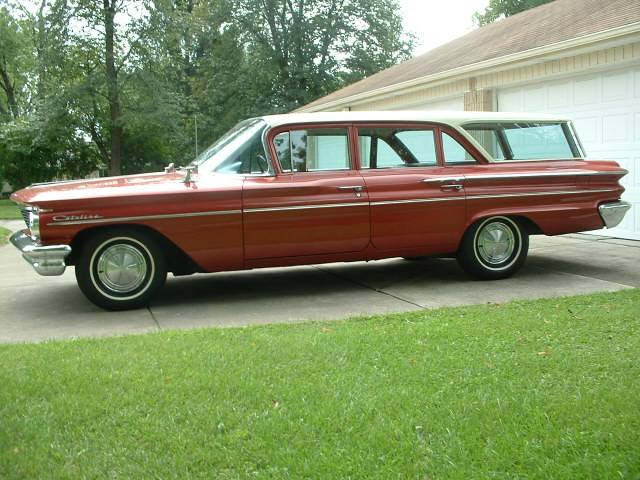 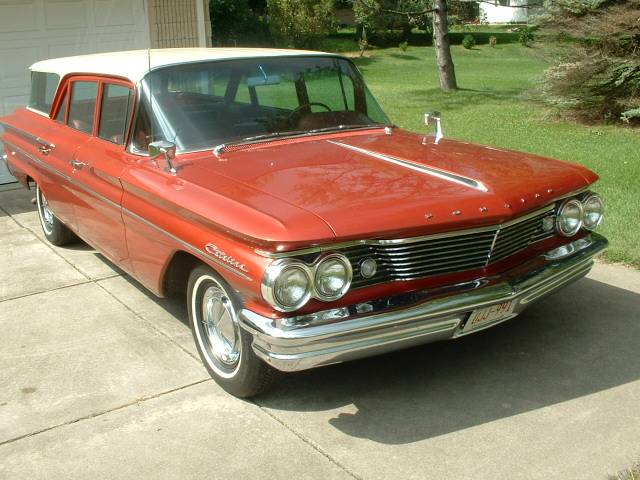 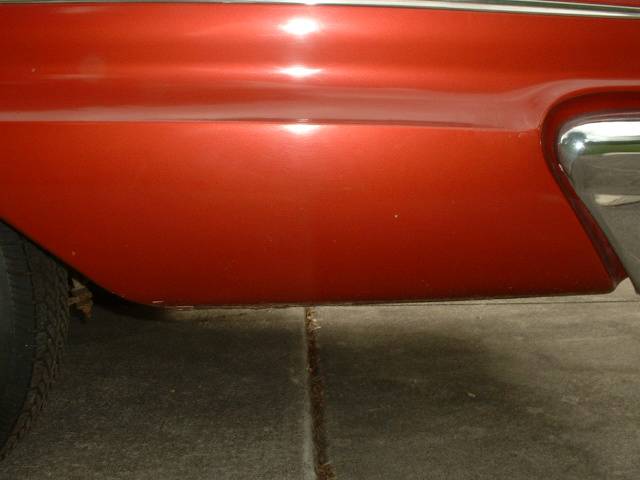 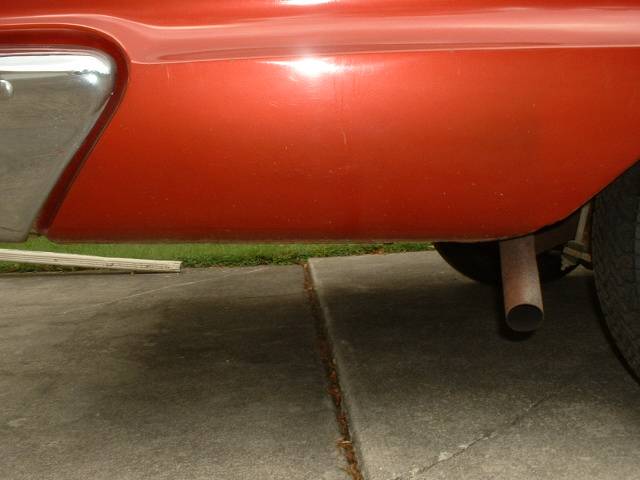 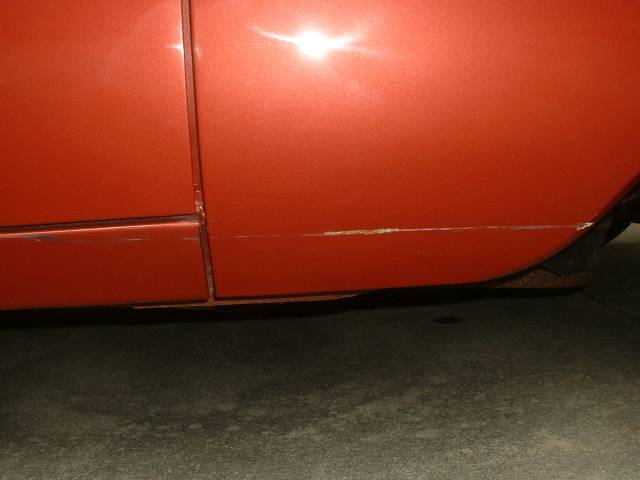 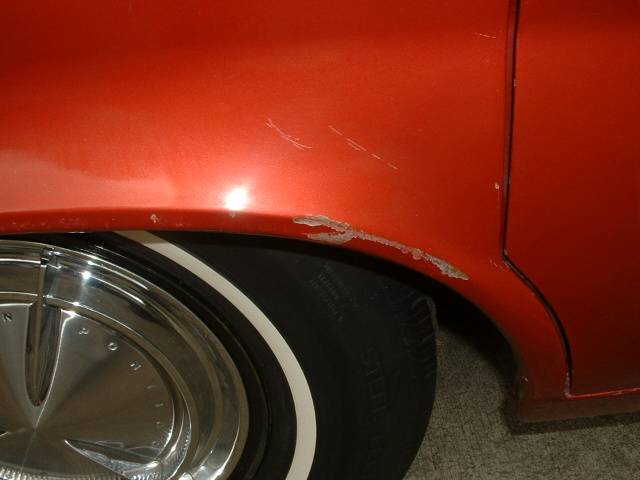 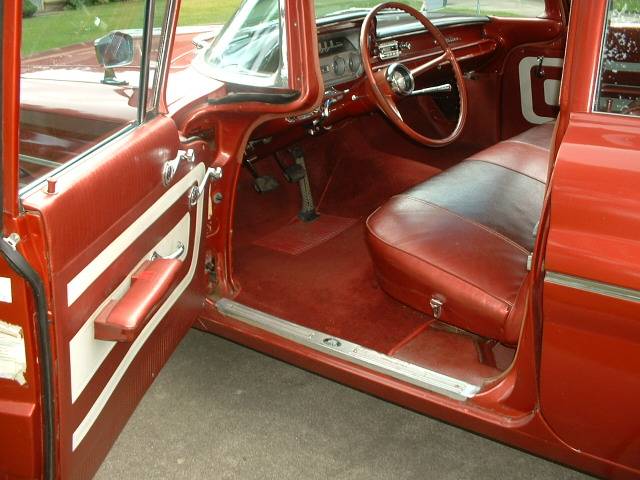 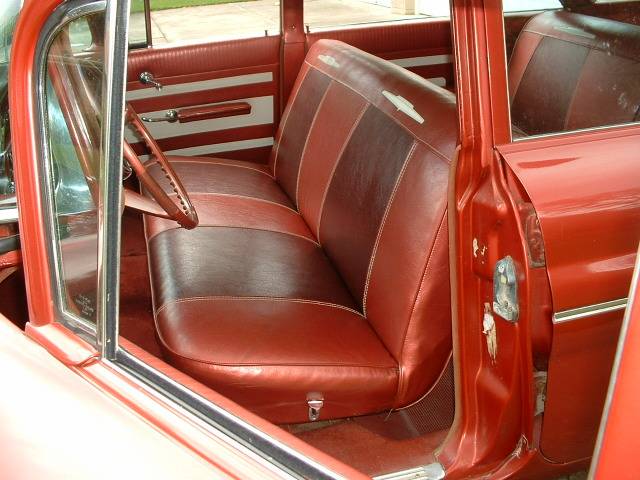 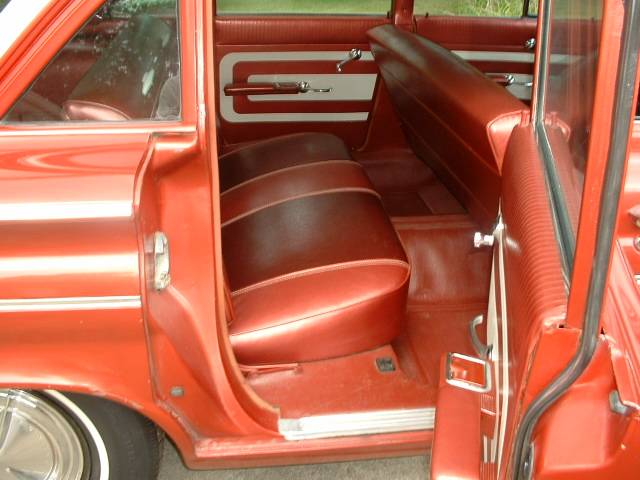 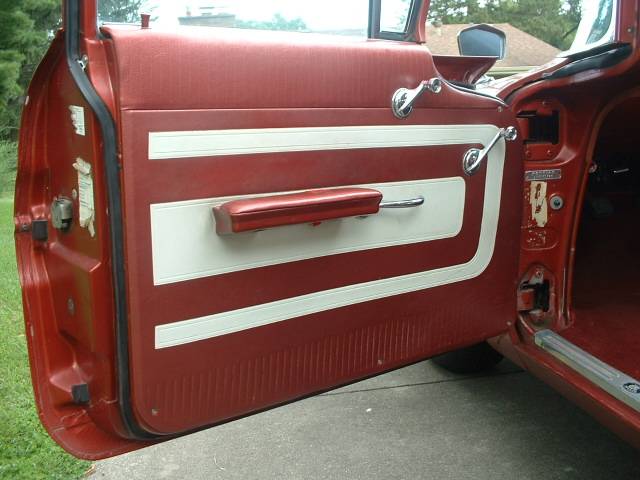 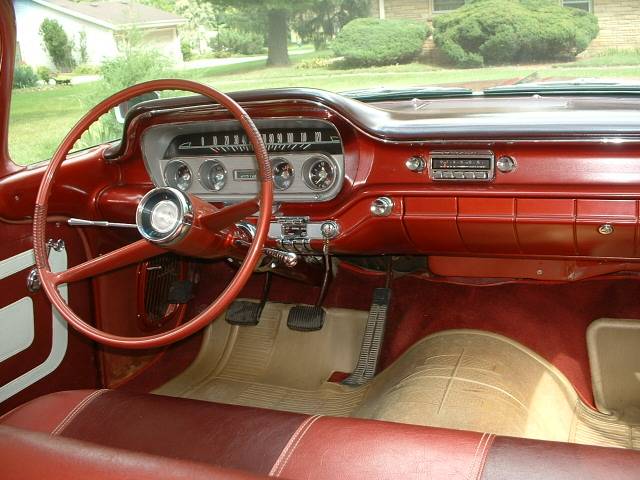 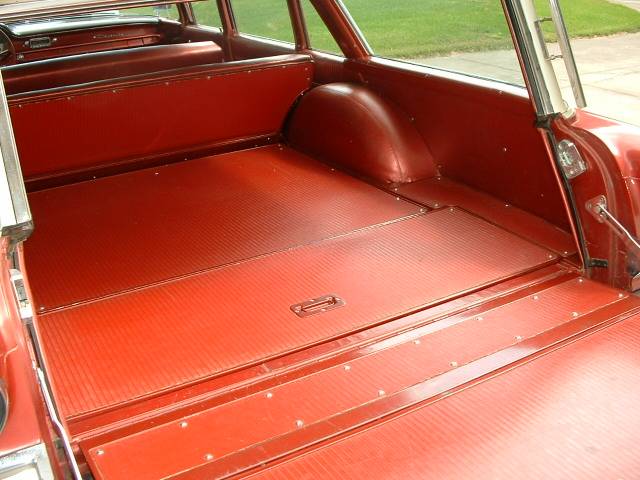 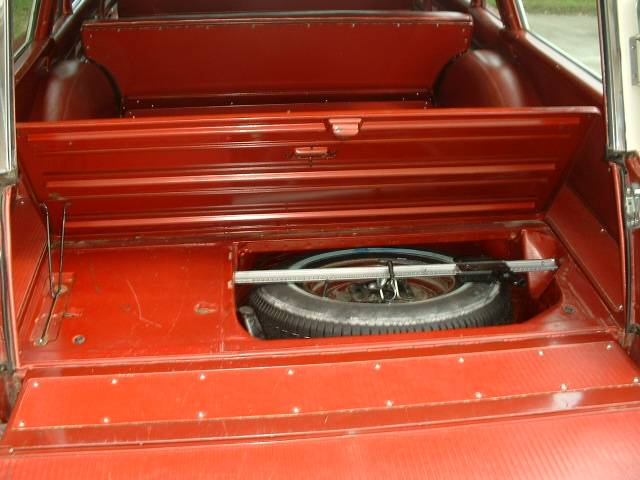 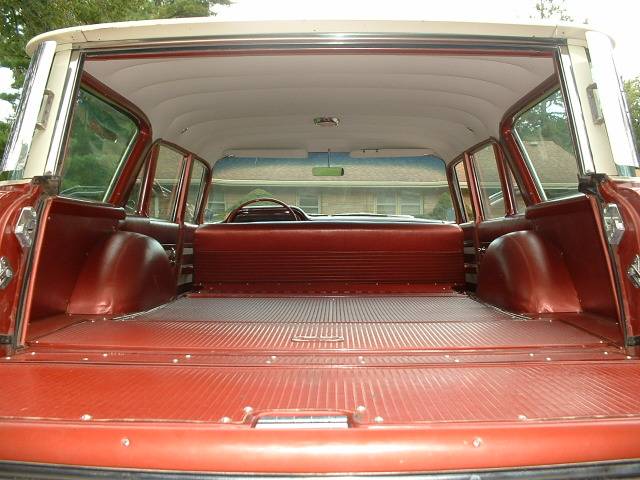 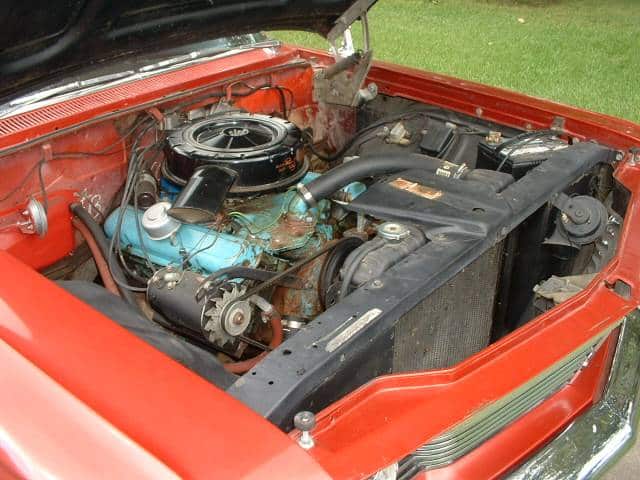 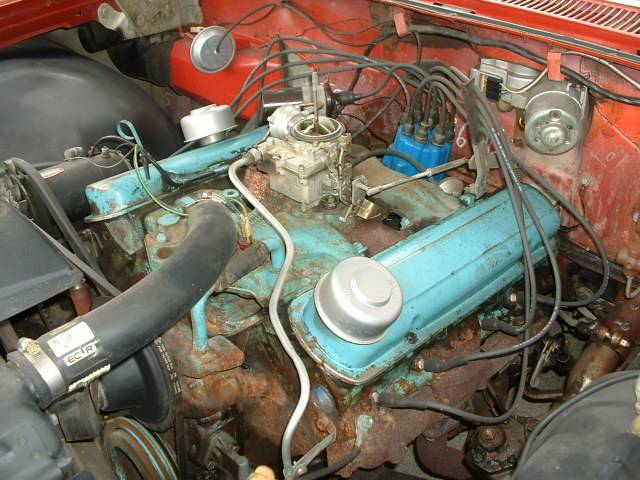 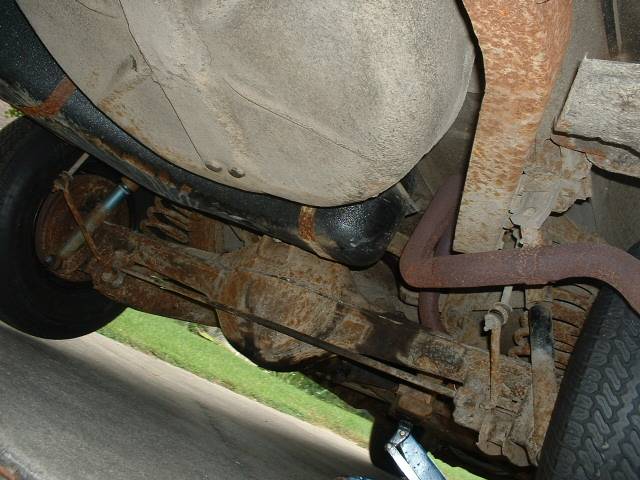 1960 marked the second model year of Pontiac’s “Wide Track” full-size models, including two wagon models.  Wagon shoppers could choose either the top-trim Bonneville Safari or the mid-level trimmed Catalina version. A survivor-quality example of the latter is this Coronado Red and Stardust Yellow two-tone 1960 Catalina Safari currently listed here on Craigslist in New Berlin, Wisconsin (Milwaulkee) is said to be a South Dakota survivor example the seller purchased in 2005. The seller reports their Catalina is an entry-level example featuring the two-barrel-topped 389 cubic inch V8 mated to a three-speed manual transmission.

Currently offered for $30,000, Classic.com, the analytics and search engine for the collector car market, confirms the ask is slightly below the one-year rolling average of this guide’s summary for Pontiac Catalinas of all body styles produced between 1959 and 1960.  By clicking on the green dots in the graph below, you can navigate to each comparable car sold as a way to help you evaluate the price of the Safari featured here:

As a second data point, the  Collector Car Market Review Online Tool reveals the seller’s ask falls between this guide’s #2 Very Good” estimate of $22,450 and its #1 “Excellent” appraisal of $33,800.

From 1955 through 1989, Pontiac branded many station wagon models as “Safaris.” Introduced in 1955 as the Pontiac counterpart of the two-door Chevrolet Nomad, the nameplate was adopted across the entire full-size Pontiac station wagon range in 1957.  In 1959, Pontiac revised its model range, introducing the Catalina Safari and Bonneville Safari (the Star Chief remained, becoming sedan-only). The Bonneville was offered two rows of seating; the Catalina was offered either two or three rows of seats.

In 1959, Pontiac dropped the name “Chieftain” and “Super Chief” models for its junior-level series and renamed it “Catalina” while demoting the former top-line Star Chief to intermediate status.  In the lower-priced Catalina line, Pontiac division advertising emphasized the top trimmed two- and four-door hardtops, convertible, and Safari station wagons instead of the pillared two- and four-door sedan variants even though the four-door sedan was the best seller in this line.

Though the Catalina was the lowest-priced full-sized Pontiac, it was priced and trimmed below the Chevrolet Impala due to GM’s overlapping price structure formula only a step below the Buick LeSabre and Oldsmobile 88 in trim and appointments but priced about $100 to $200 less. Catalinas also came standard with more amenities than Chevrolet models. They included a larger and more powerful V8 engine of 389 cubic inches, compared to Chevy’s six-cylinder or 283 and 348 cubic-inch V8s. Pontiacs also benefited from a much better automatic transmission than their Chevrolet counterparts – the four-speed Hydra-Matic – versus the Chevy’s two-speed Powerglide.

Though the basic Catalina started with a full rubber mat, it could be ordered with full carpeting, glovebox, and trunk lights; dual front ashtrays, cigar lighter, and a glove compartment snack bar (two cup indents on the glovebox door that could be opened for use at drive-in restaurants) were standard, heater-defroster and a choice of cloth and Morrokide vinyl upholstery or expanded Morrokide (all-vinyl trim) optional. Pontiac buyers could add even more trimmings for a few dollars more by ordering the “decor group,” which added full-wheel covers, a deluxe steering wheel, chrome pedal trim plates, and more.

Catalinas and other 1959 Pontiacs were completely restyled on a new General Motors B-body that was shared by all GM divisions from Chevrolet to Cadillac, replacing the previous A-body utilized for Pontiacs and Chevrolets that was used only for 1958. Twin tailfins, two on each side, were new only in 1959.  Styling highlights include thin-pillar rooflines and greater use of glass for increased visibility. Pillared four-door sedans feature six-window styling, while two-door hardtops were dubbed “bubble tops” due to the large wraparound bubble windshield, thin c-pillar, and large rear window; four-door hardtops featured flat-blade rooflines with an overhang past the rear window. Wheelbases were 122″ for Catalina and 124″ for Star Chief and Bonneville, but the overall length of Catalina was seven inches shorter than Bonneville and Star Chief at 213.7 inches.

The 1959 Pontiacs featured a “split grille,” which came about accidentally when the styling studio was exploring grille design. Experimentally, a design for a conventional, full-width, oval grille containing horizontal quad headlights was cut in two. The lights remaining at the extremities gave a split-center, open-ended look to the ’59 Catalina. Along with the wider body came a five-inch wider chassis in which the wheels were moved out towards the fenders. This not only improved the car’s appearance but also led to improvements in ride and handling – spawning the term “wide track” ride and handling, which Pontiac would use in its promotional efforts for many years.

All Pontiacs were powered by various renditions of the new 389 cubic-inch Tempest V8, a version of the previous 370 cubic-inch V8 with the stroke increased to 3.75 inches. Catalinas came standard with a 235 horsepower version of the 389 with a two-barrel carburetor and 8.6 to 1 compression mated to the three-speed manual transmission. When the optional four-speed Hydramatic transmission was ordered, the standard engine was a 280-horsepower version of the same engine with a higher 10.5 to 1 compression ratio. Available as a no-cost option with the Hydramatic transmission was the 215-horsepower 389 (dubbed the Economy V8) with an 8.6 to 1 compression ratio, which burned cheaper regular gasoline, instead of the premium and super-premium fuels required for the high-compression engines, and was capable of achieving more than 20 MPG on the highway. Optionally available at extra cost were higher-power versions of the 389 V8 with four-barrel carburetion rated at 283 horsepower (211 kW) with a manual gearbox or 303 hp with Hydramatic, a 4-barrel carburetor version with a horsepower rating of 318, or “Tri-Power” options with triple two-barrel carburetors providing either 330 or 345 horsepower.

For 1960, Catalina and other Pontiacs received a minor facelifting of the ’59 bodyshell with a new full-width horizontal bar grille similar to the 1930s Cord 810/812 replacing 1959’s split grille and round taillights. Bodystyles and drivetrain offerings were unchanged from 1959. New to the options list was a “Sportable Transistor” radio that could be used in the car instead of the regular “in-dash” radio or removed from the car for use as a portable with battery power.  Also new for 1960 was the optional “Al-Fin” eight lug-nut aluminum wheels with integral brake drums that enhanced the car’s looks and provided improved stopping power. Another popular option for performance enthusiasts was the “Safe-T-Track” limited slip differential. In the suspension department, the front track was increased from the 59’s 63⅞” to 64″. In the engine compartment, the so-called “gusher type” cooling system (with cooling liquid entering the engine over the exhaust valves, reverse of what is more normally done) was replaced by the so-called “Equa-flow” type (with conventional V-8 cooling configuration). Turn signals became standard equipment, while the air conditioning was a $430 option and a padded dash was $19 extra.

In addition to the seller owning their 1960 Pontiac Catalina Safari for nearly twenty years, we love that they resisted the urge to modify the car in any way. Also novel is the fact this Safari features a three-on-the-tree column-shifted manual transmission.

If you are serious about buying this 1960 Pontiac Catalina, you can start the conversation only by calling (262) 797-9736.  When you connect, please remember to mention you saw their Safari survivor featured here on GuysWithRides.com. Good luck with the purchase!

Former South Dakota car, I purchased it in 2005, and it has been in Wisconsin for the last 18 years under my continuous ownership. Always been garaged, and always stored winters while I have owned it.

This wagon is all original, meaning that there have been no technology upgrades, no mechanical modification from factory stock. It remains pure 1960.

Features E-Z-Eye glass all around, and chrome air deflectors on each rear corner to defog/defrost rear tailgate window. Also equipped with factory AM pushbutton radio, cigarette lighter, 2-speed wipers, clock, and they all work. Heater/de-ice with working 2-speed fan.

The body is excellent but with the following 2 flaws: a scratch on the lower right front fender and a scrape on the right rear wheel well, as shown in the photo close-ups. Also, there is a dent in the rear bumper. Underneath there is plenty of raw, untouched South Dakota patina, nothing covered over or hidden.

Runs and drives well. Comes with 2 sets of original GM Briggs & Stratton keys. Also included is a copy of the previous owner’s South Dakota title dated October 3, 1967, so I’m guessing that I may be only the third owner of this wagon over the last 63 years.

Clear Wisconsin title in my name.

Reply by phone call only. No texts. Will not respond to emails.​”

Show or go: What would you do with this 1960 Pontiac Catalina Safari Survivor for sale?  Please comment below and let us know!